Article Reviews (1) Gallery
Okay, I’d like to see a show of hands, please. How many of you, when you’re browsing through Boat Trader or Craigslist online looking for a diamond-in-the-rough hot boat steal, do you immediately slam to a stop and start dialing the phone or sending an email when you see a 30+ year old 26-foot deep-vee, rounded keel, high sided Four Winns Liberator cruiser for sale? Come-on, hold those hands up a little higher, I can’t see them! 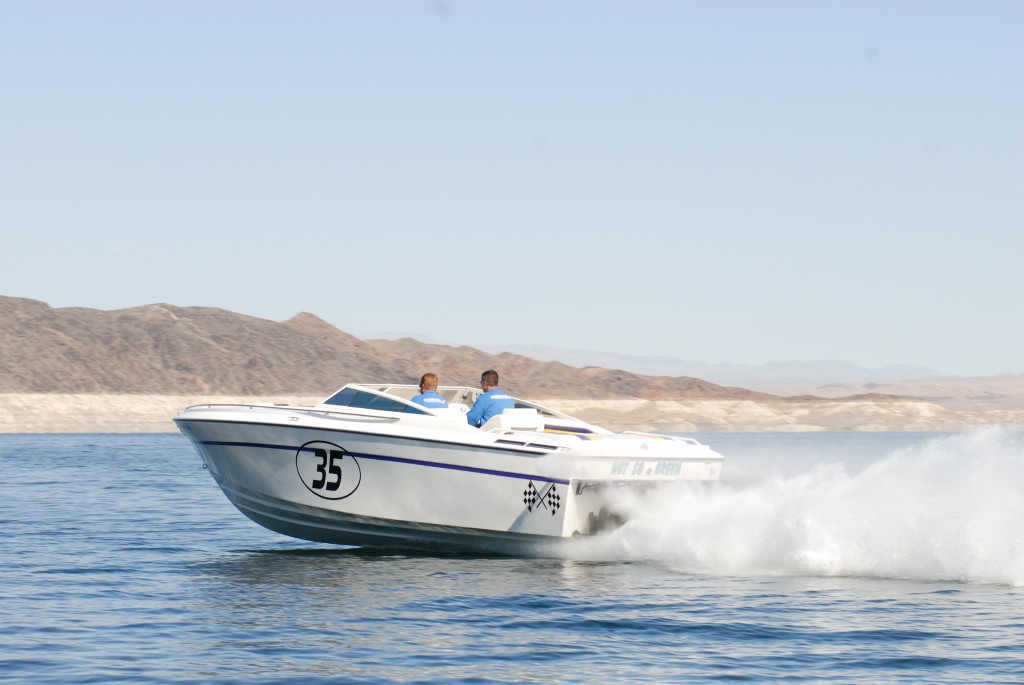 Maybe one of these gems isn’t quite what you had in mind as your perfect match, but for John Ortlieb of Henderson, Nevada, it was like finding an original Honus Wagner baseball card in an old shoebox at a garage sale. There it was, in San Diego, California just waiting for some TLC, a 1987 Four Winns Liberator with a pair of King Cobra OMC stern drives and 460 Ford engines for only $2,500. Okay, so the 460 Fords were salty toast, in fact, one of them was frozen up solid.


Although not what you’d call an experienced performance boater at the time, John knew that he wanted something that went faster than the 1969 Skipjack he currently owned. He paid the price rescuing the Liberator from its painful saltwater confinement, took it home and a strategy for the transition began.


Out came the engines and off came the drives. The Liberator soon found its way to All Seasons Marine in Boulder City, an unassuming marine dealership/repair facility well known for its expertise in all things that go fast, especially boats of a vintage nature. With over 60 years in the business, owner Ted Miller and sons Mike and Pat knew immediately that they had a project on their hands. 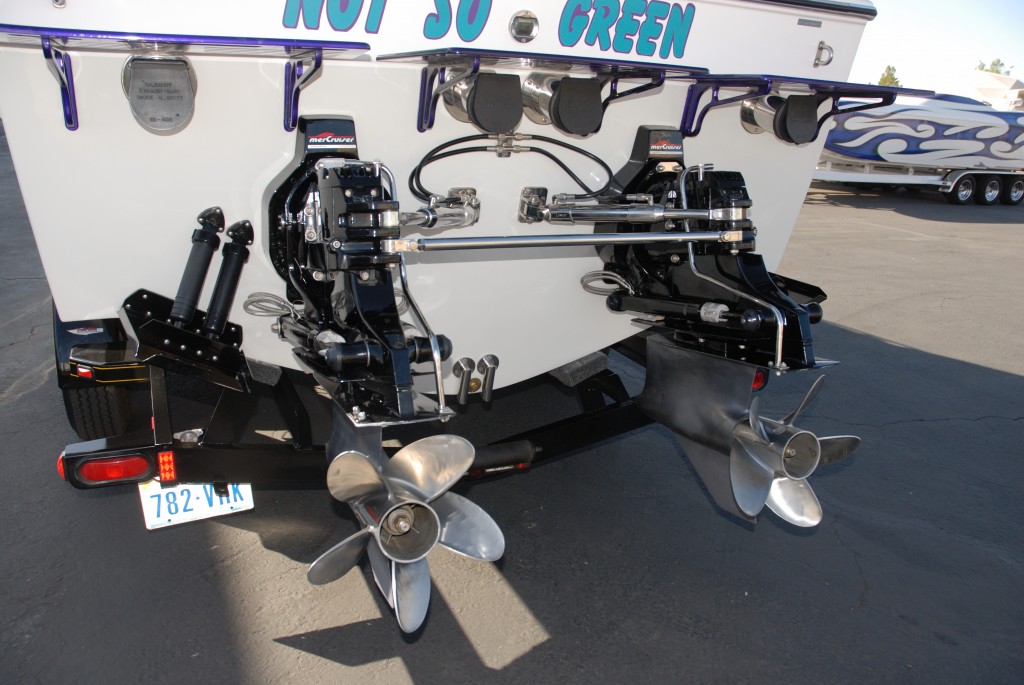 “We’ve done a lot of upgrades and unusual conversions over the years,” said Miller, “but trying to bring this Four Winns back to life was venturing into some uncharted territory.” Phase one went relatively smoothly. “We built a pair of 502 c.i. Chevy big blocks using some of the parts we had in stock. The motors were naturally aspirated with single four-barrel Holleys and cast iron heads. Nothing too trick since we were working within a limited budget. We got a set of standard Bravo One MerCruisers and put them in the same transom holes where the King Cobras used to be. The steering was stock MerCruiser and the boat didn’t have any trim tabs. The engines made about 550 horsepower apiece.”


“When we took it out for the initial test run, we were really quite pleased,” said Miller. “The boat ran about 75 mph and much to our surprise, it handled really well. No chine-walk or porpoising which is unusual for a very tall freeboard deep-vee. It was really quite manageable to drive. However, when John took the boat for a test spin, he wasn’t as impressed as we were. He was hoping to see 100 mph!” 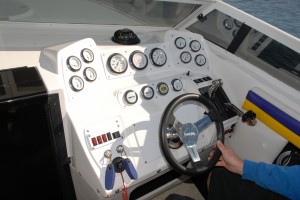 So, phase two begins. If the Liberator is going to approach triple digits it’s going to take more upgrades, lots more upgrades. “I really had no idea if this Four Winns was even capable of going 100,” said Miller. “When it was originally designed and built, it was probably intended to be a moderately fast sportboat, maybe in the low to mid 60 mph range at best. Now we were looking to exceed that comfort zone by about an extra 40 miles an hour. We definitely had our work cut out for us.” 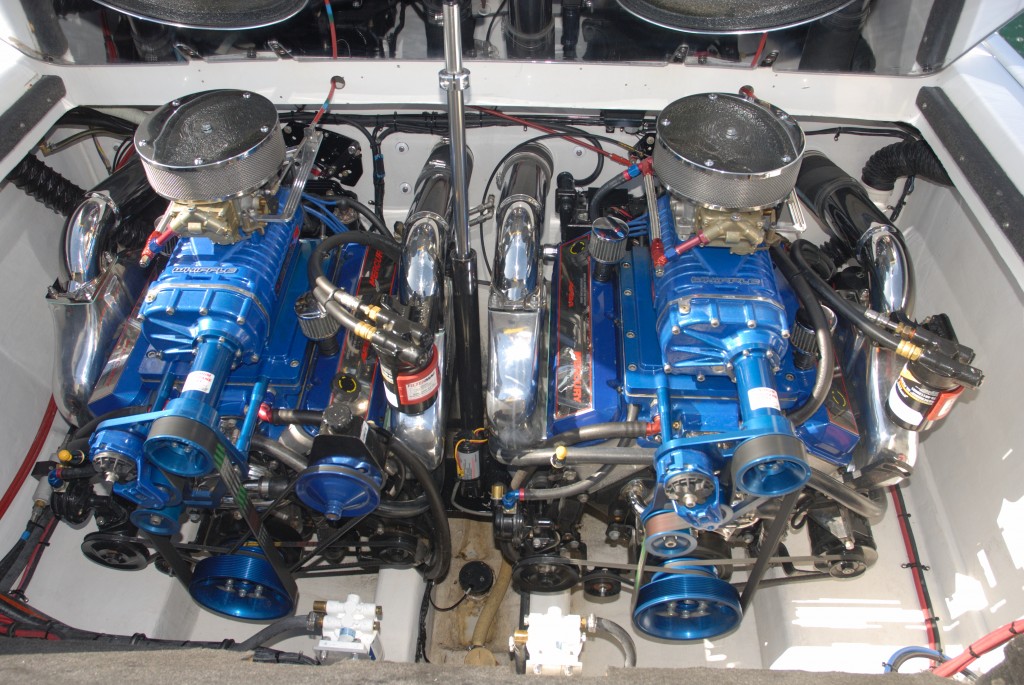 Again, the motors came out and the drives came off. This time, the transom looked a little questionable with some signs of dry rot, something that couldn’t be tolerated with more horsepower about to be bolted between the stringers. The transom was replaced and new holes cut for the drives, this time raising the units a full three inches over the factory X-dimension.


The stock Bravos were then beefed-up to XZ specs (still using bevel gears, not straight-cut) with a steel tower, larger shafts and a high performance transom assembly. A pair of Leading Edge nose cones were added with low water pick-ups. Since the IMCO Nevada operation is just a few blocks away, a full hydraulic dual ram external steering system was also now standard equipment. So were a set of Bennett Sport Tabs. 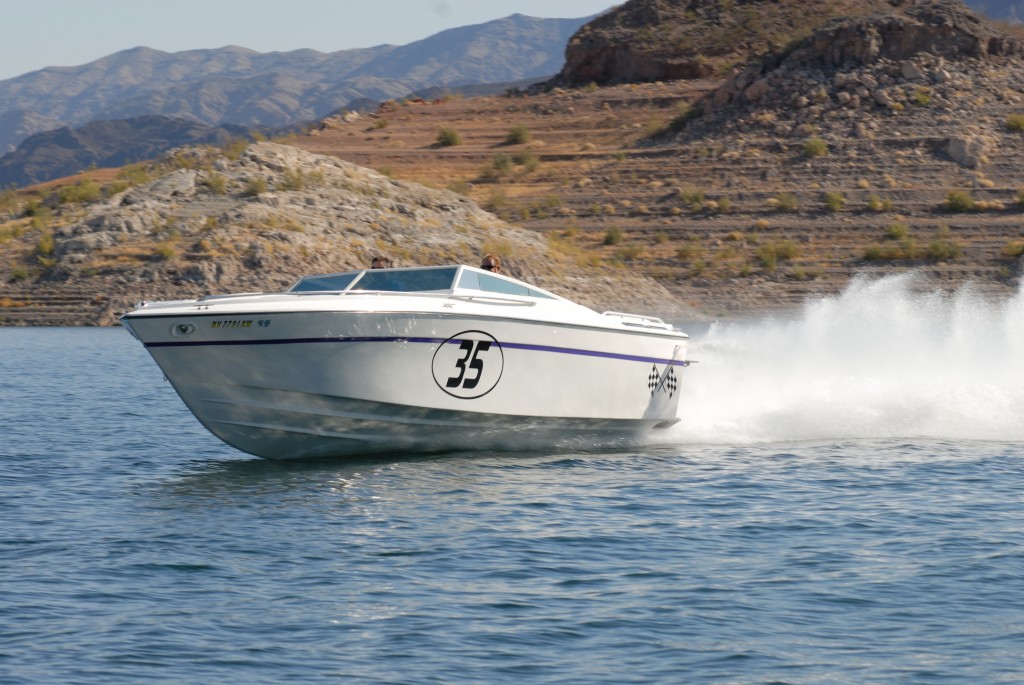 The 502 blocks got punched to 509s and the cast iron heads were tossed in favor of a much better breathing set of Canfield aluminums with Inconel valves. This was also time to install better rods, bearings and pistons plus a little more radical hydraulic roller Crane cam. The final step was a couple of Whipplechargers for the induction system with Holley four-barrels and IMCO Power Plus cast aluminum exhaust manifolds. With the present pulley size, you’re looking at approximately 850 horsepower per side. So long San Diego bay cruiser, hello “lake sleeper.”


In order to take advantage of all this new found power, there are 1.36 : 1 gears in the drives and a wicked pair of seriously labbed Mercury 30″ pitch Maximus five-blades on the propshafts.
Thankfully, this story has a happy ending. John now has his 100 mph Liberator, in fact, the tattletale on his GPS speedo routinely reads in the 104 – 108 mph range. Fastest Four Winns ever? I think so, unless there’s proof to the contrary.

These are the kind of tales that truly inspire others to take on projects, that in their own special way makes perfect practice, though they at first seem to defy logic and common sense on all levels. To be able to elevate one's game by embracing all the difficulties arising is totally liberating at the end of the match. This is the greatest of stories, and I bet many owners of impressive performance boats took serious note of the look of this classic, so not to be tempted to challenge it in the future.
Read more…