Inked up sales contracts state the obvious; serious spenders trumped strolling pretenders on the Bahia Mar docks during the 2020 Fort Lauderdale International Boat Show (FLIBS). Never have I covered a show where so many boat builders sang the same song with the refrain sounding something along the lines of, "We are sold out and our production timeframe is between six months to two years depending on the model." But better yet, other makers chimed in humming the "we already took three deposits on opening day" tune.

Hallelujah! The leisure lifestyle market has outshined our vivacious president's valiant V-shape economic revival projection, opting to instead – blast straight up! Boaters are smashing sales records, cashing in and splashing everything from Tahoe pontoons to Tiara yachts.

The freak-out phase from March to May when digits dipped for fear of a repeat 2008 economic crash is long gone. Data from the National Marine Manufacturers Association (NMMA) confirms boat purchases are up 74 percent, with more than 30 percent attributed to first-time owners. The figures might appear perplexing since sales were slacking off pre-Wuhan virus, but the comeback is what happens after eight months of cabin fever and canceled holiday vacations.

Americans are craving fun in the sun and swells and the new normal is navigating a boat... hence, the booming success of the show. Quality over quantity is what FLIBS organizers promised, and quality over quantity is what was delivered. Empty blocks on the docks were visible here and there but it was far from sparse, and human interaction was at a high for 2020 standards even though dictatorial do-nothing face diapers were required in the 100 degree heat. 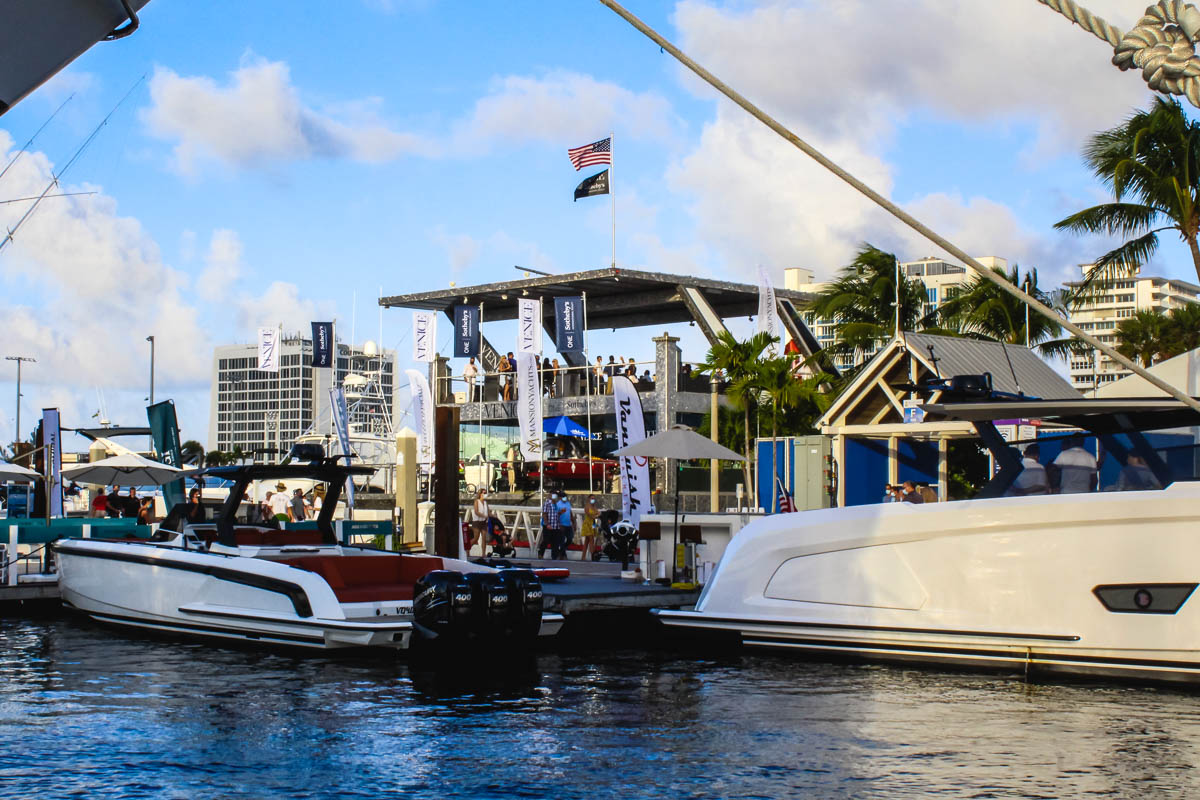 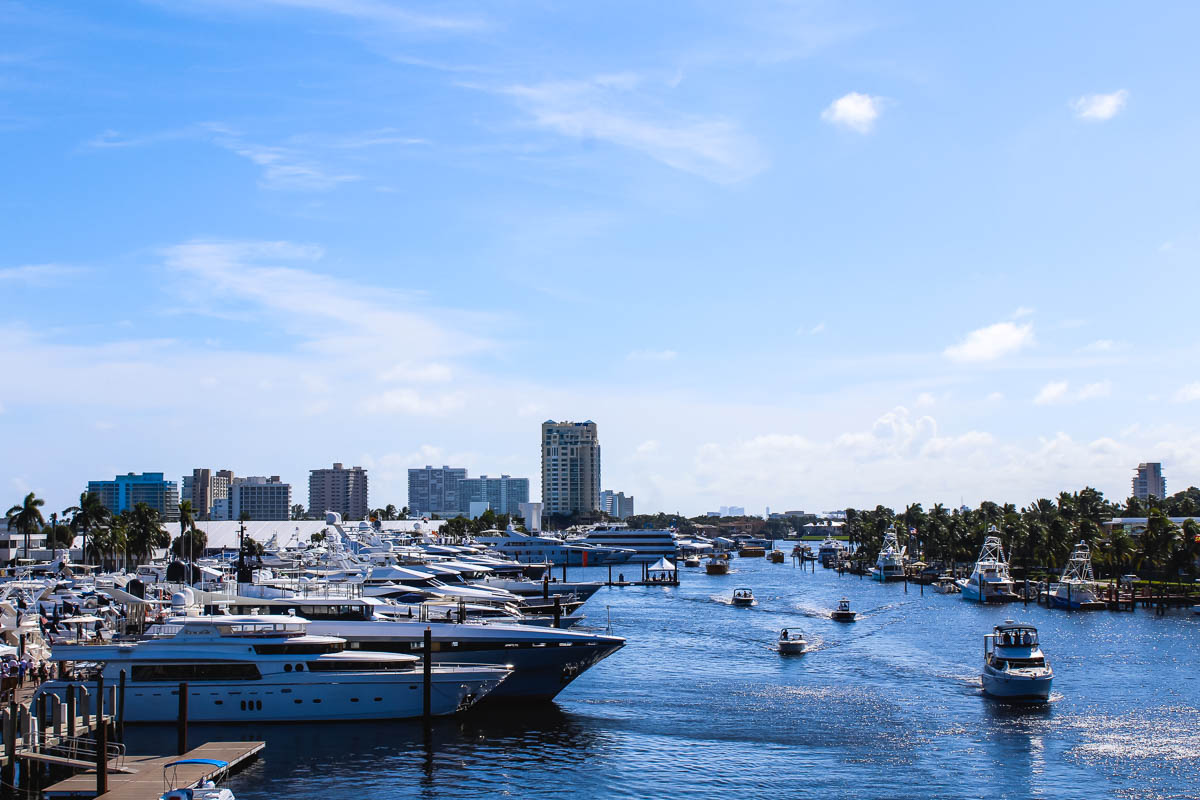 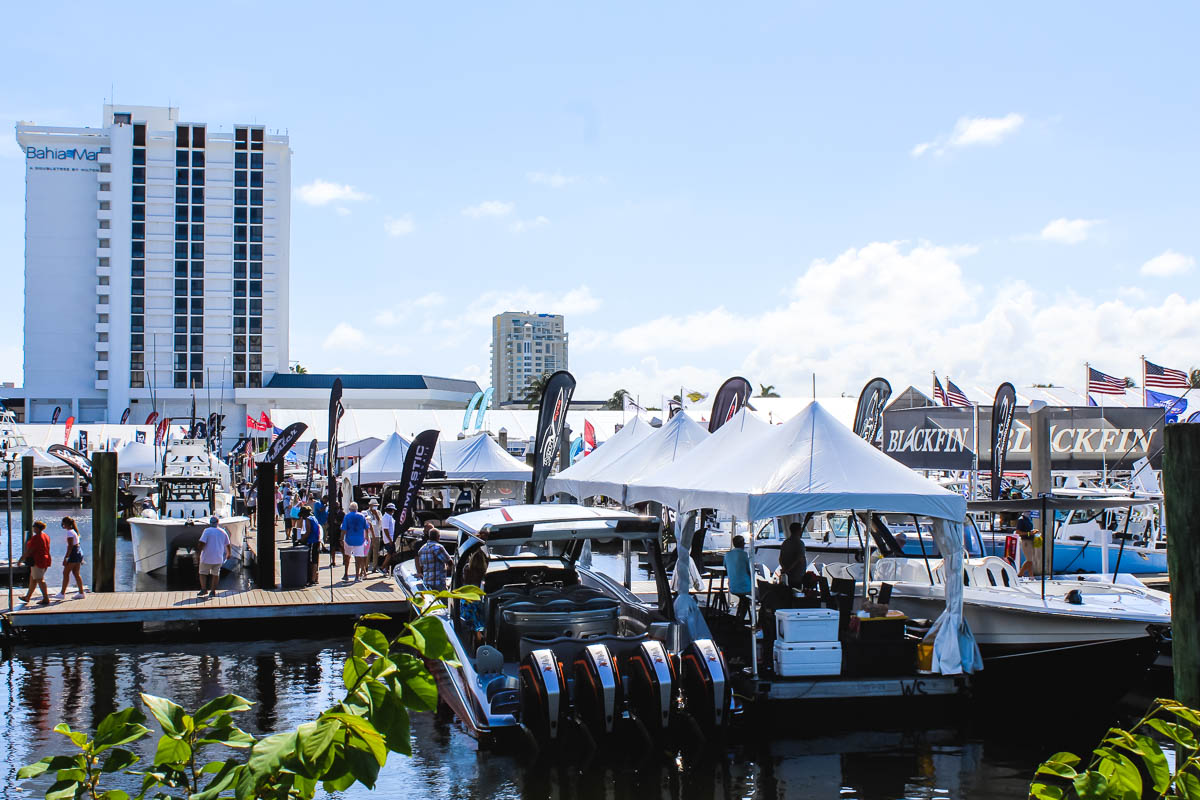 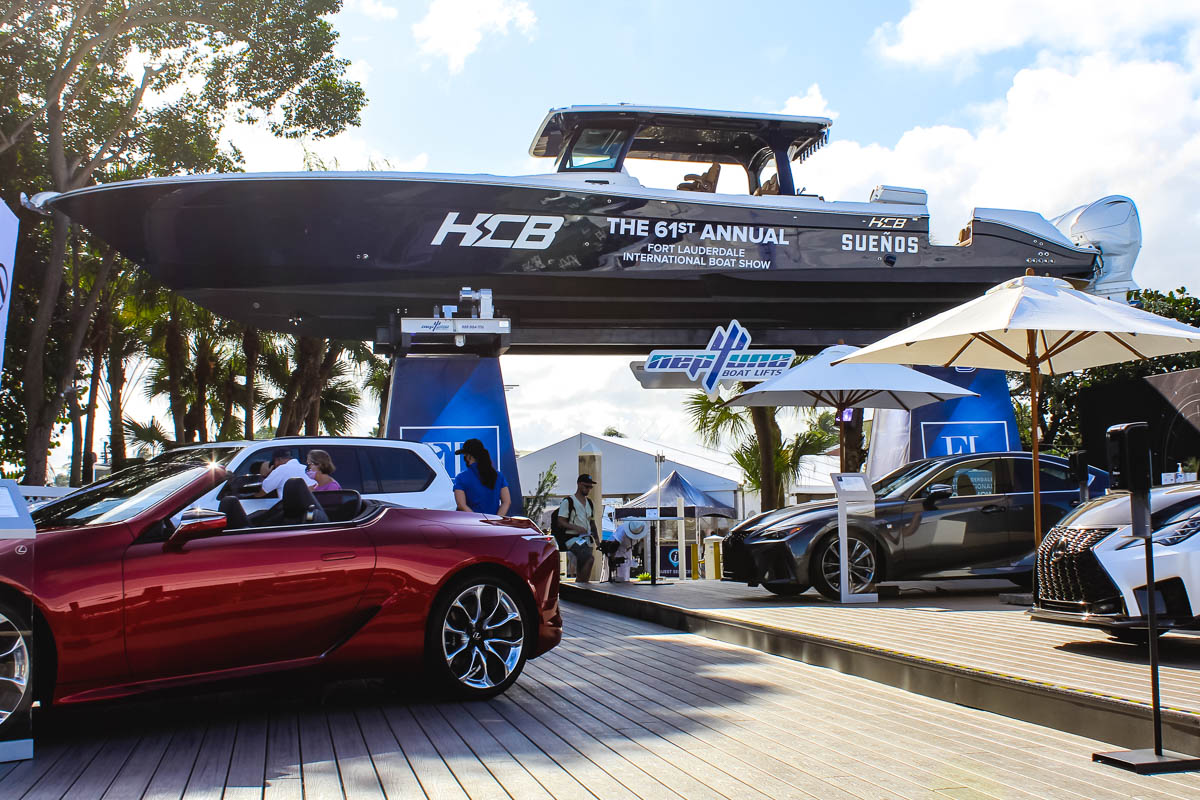 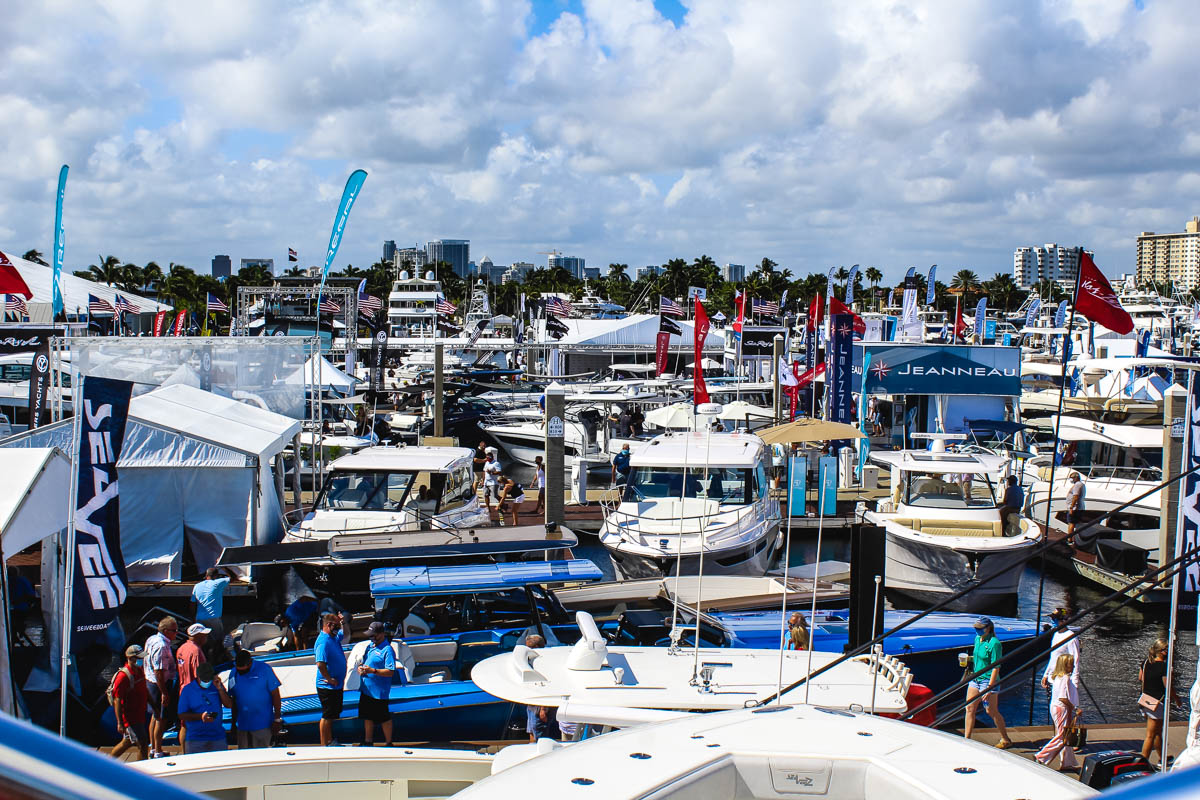 Always decorated with the drool-worthy inventory, my routine first stop was HI Dock. Leave it to Nor-Tech to steal the show before I even made it down the ramp. The Norwegian duo of Trond Schou and designer Nils Johnsen did not disappoint with the newly unleashed Nor-Tech 460 Flyer. It screams -- style, speed and sumptuousness – and was the high-performance highlight of the five-day affair. Maybe I am impartial since the attention-grabbing, bright blue joyride is the same blingy shade as my car, but it was hard not to stare, stare and then stare some more.

Johnsen engineered the 460 Flyer as a sexy, creature-comfort laden craft meant to capture the cool kid market, and inspire those who just can't get past the fishy facade of the center console, yet long for all the amenities the turn-key trendsetters bring to the table.

Blending together the best of both worlds, the 460 Flyer flaunts a retractable hardtop (with a manual SureShade included off the backside) and takes under two minutes to go "topless". The one-man-maneuver is simple and requires just a few minor cabin preparations before the push of a button. Here's the link where you can watch the mesmerizing hardtop to no top transformation:
https://www.facebook.com/video.php?v=3479181378809763
. 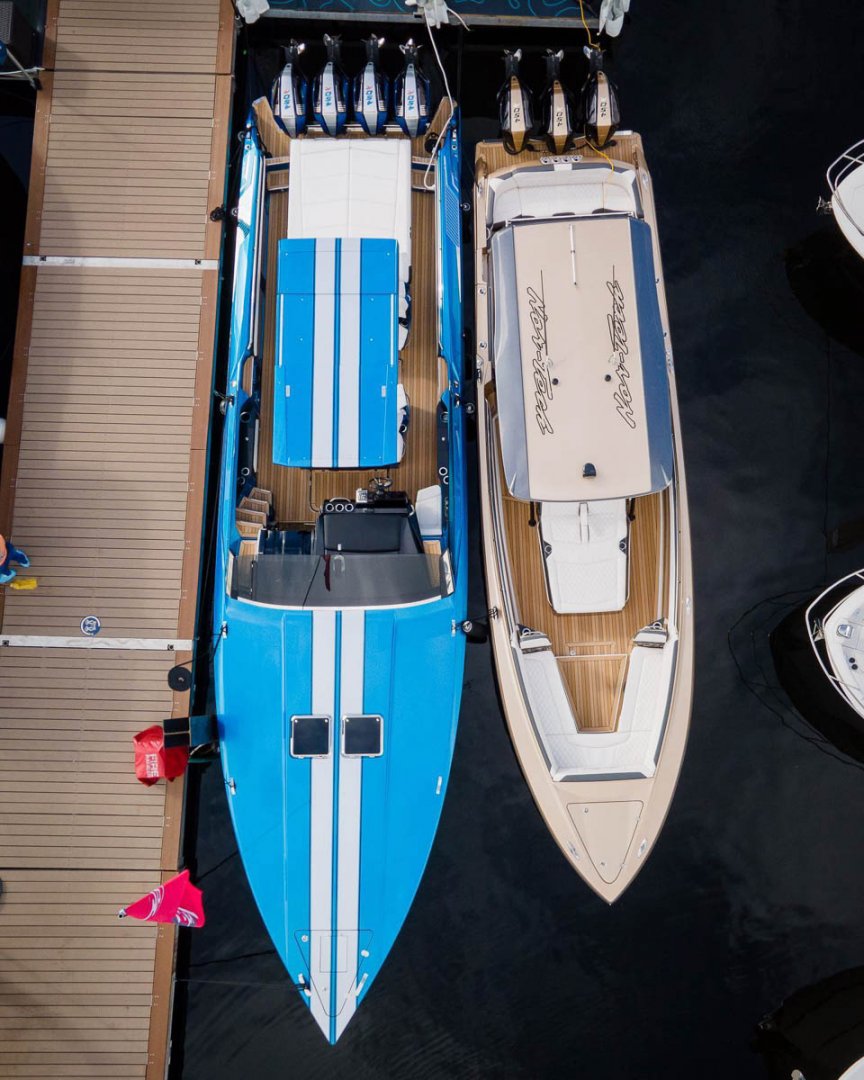 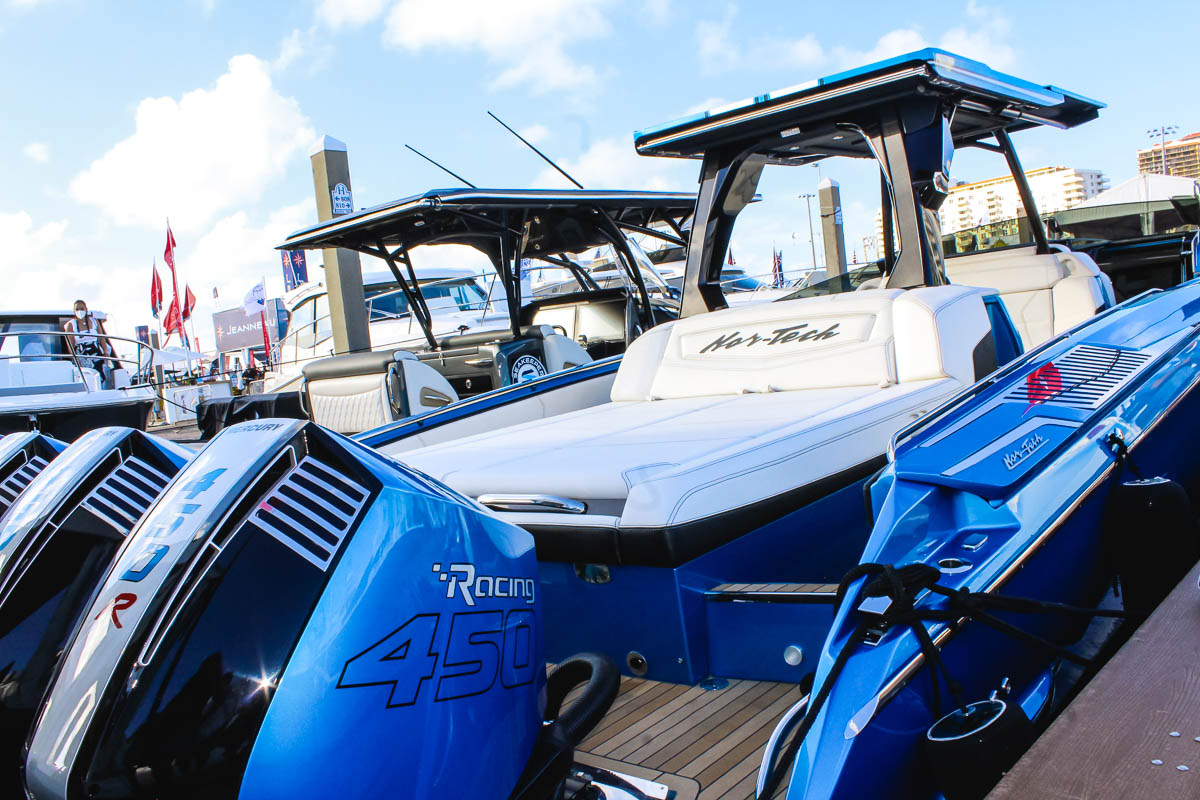 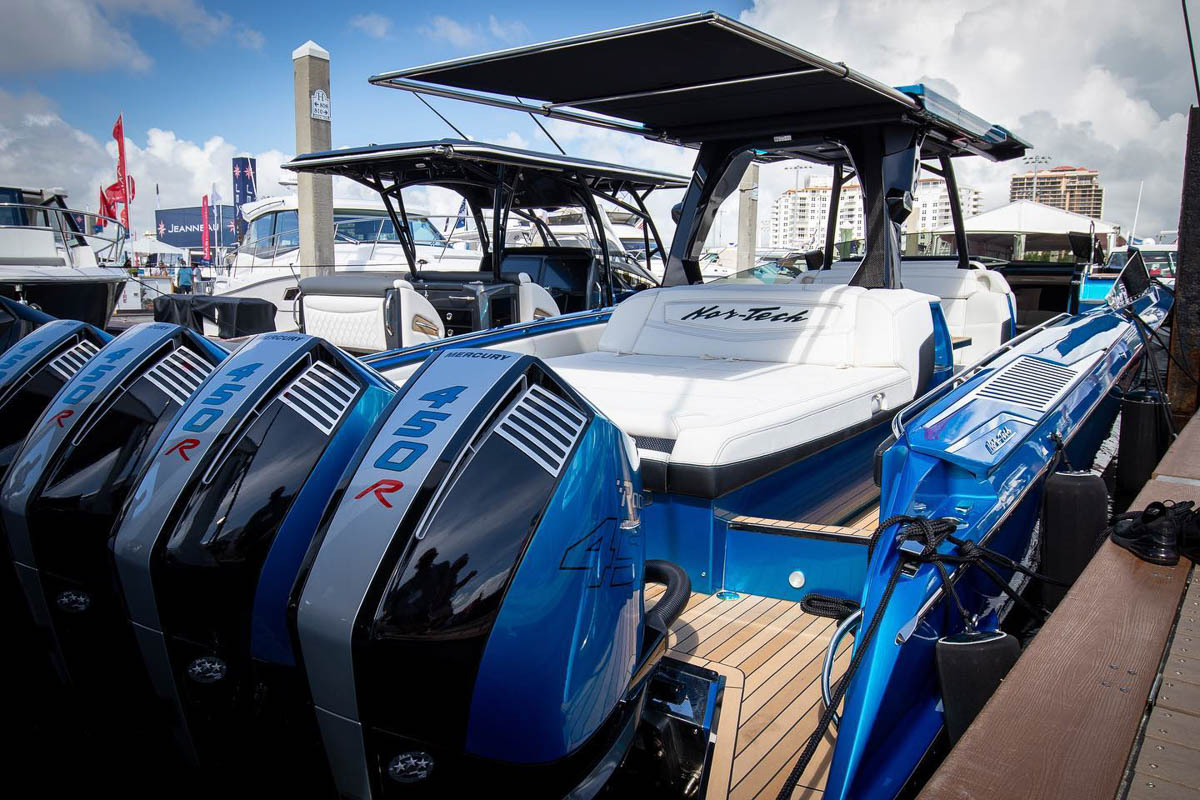 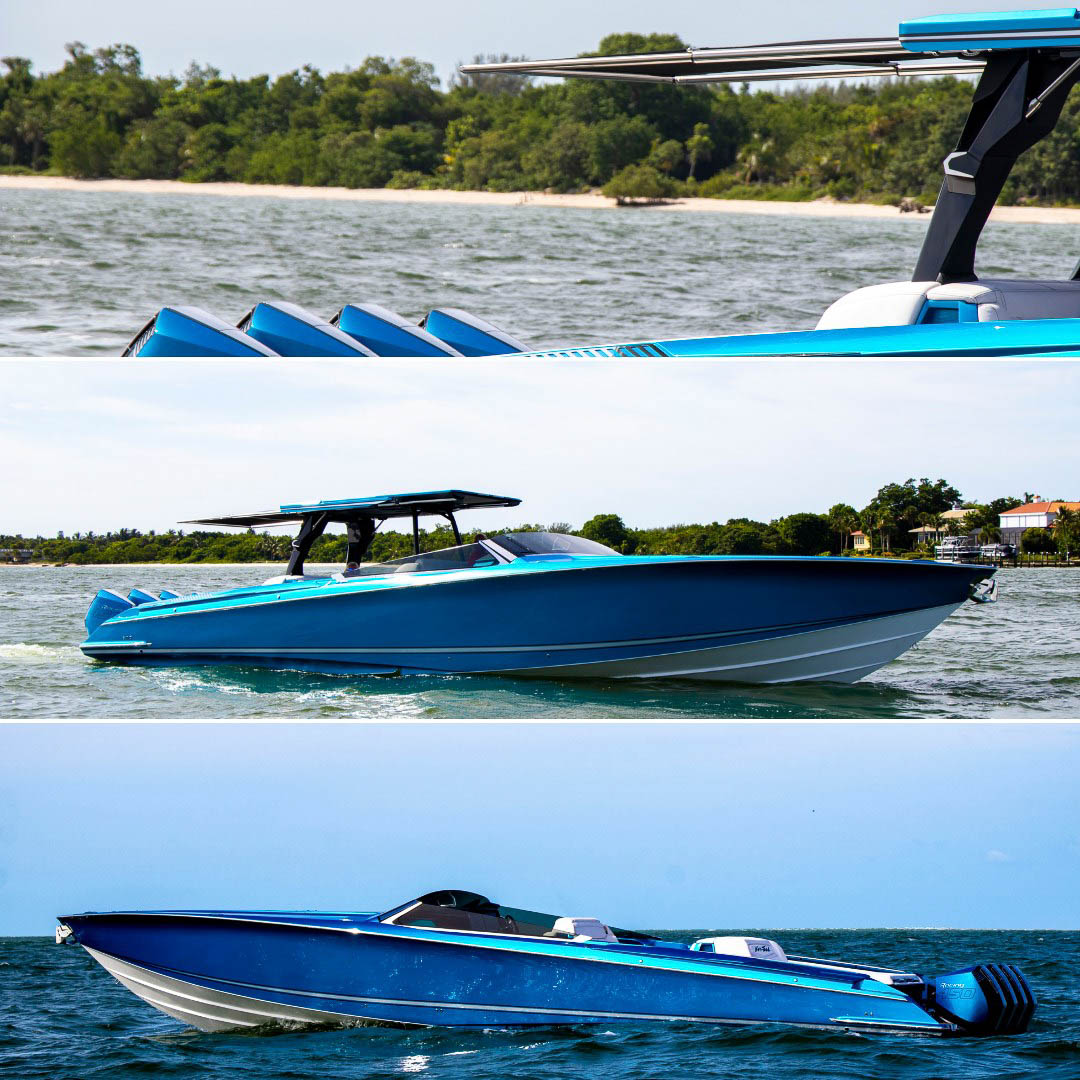 Spacious both on the inside and out, the inviting cabin comes equipped with a mini galley, stand up private head and shower, wraparound seating and loads of natural lighting thanks to the window placed inside the starboard side entry door (which can be shaded out). The cockpit features twin 24-inch Garmins, faux-teak marine matting, pull-out port side steps for easy access boarding, insulated side coolers and mini-sink, designated bumper storage and an additional forward set of steps leading to the deck. And to keep you "on your feet" a non-skid component has been added into the paint work on the bow. Need I say more? Okay, how about with levers maxed, the quad Mercury Racing 450R outboards make 84 mph a reality on this baby!

The 460 Flyer shares the same hull and 12' beam as the Nor-Tech 45 Sport center console, and can be yours for $1.58 million. Three more are in production and customizable options include bow seating and a fixed hardtop. Hull No. 2 will be paired with not four but five outboards and projected to pass the 90 mph mark. 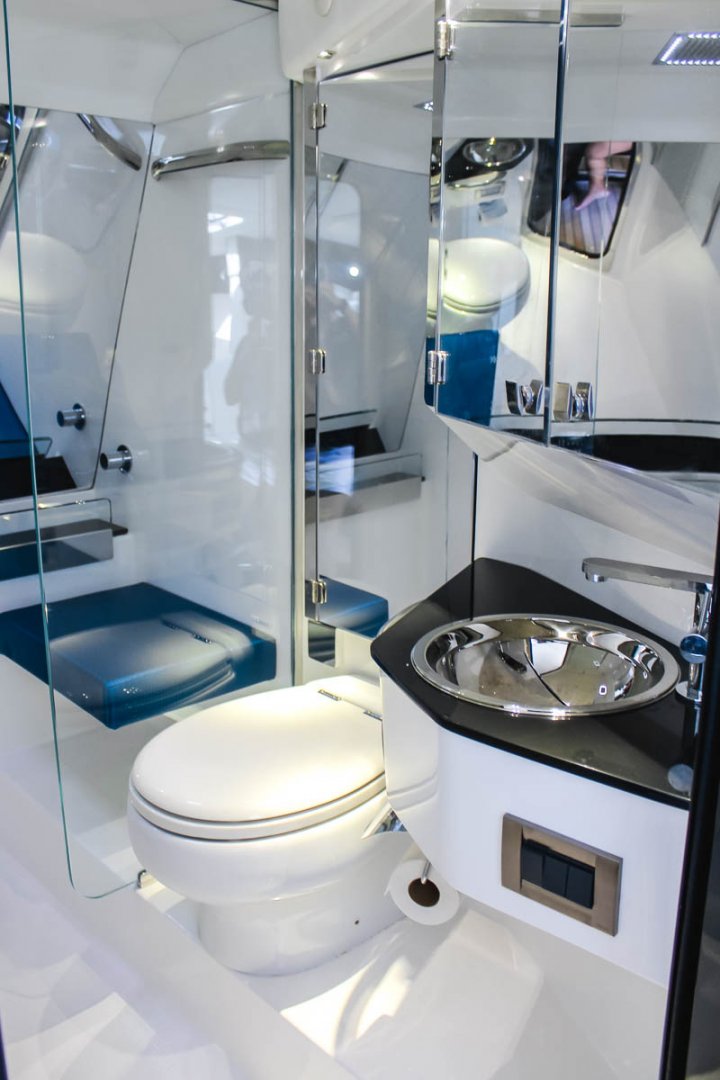 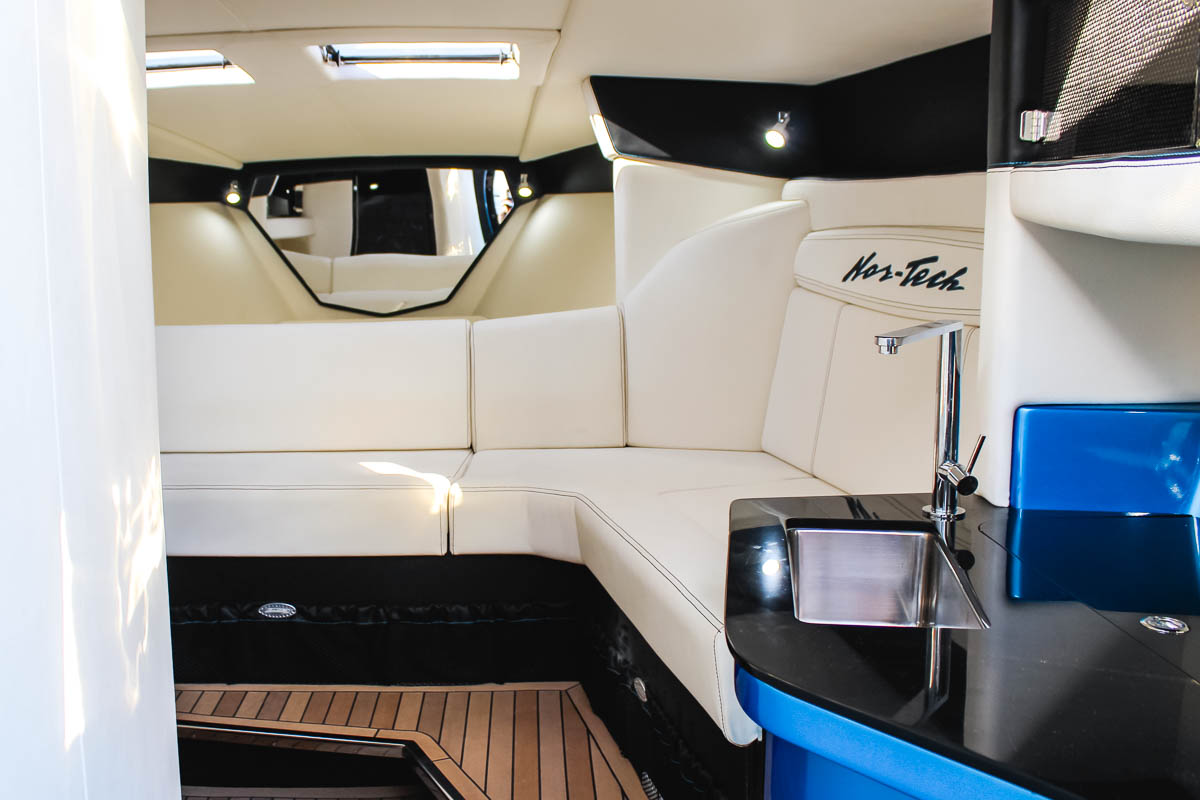 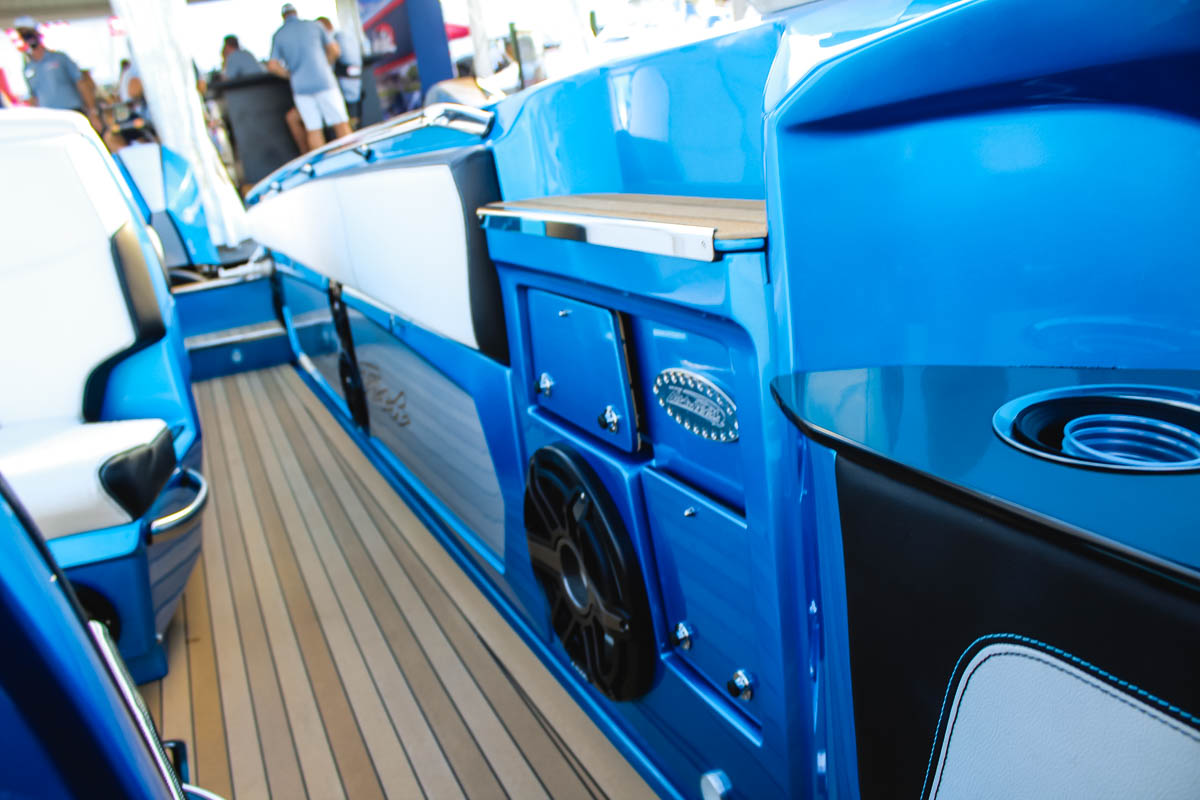 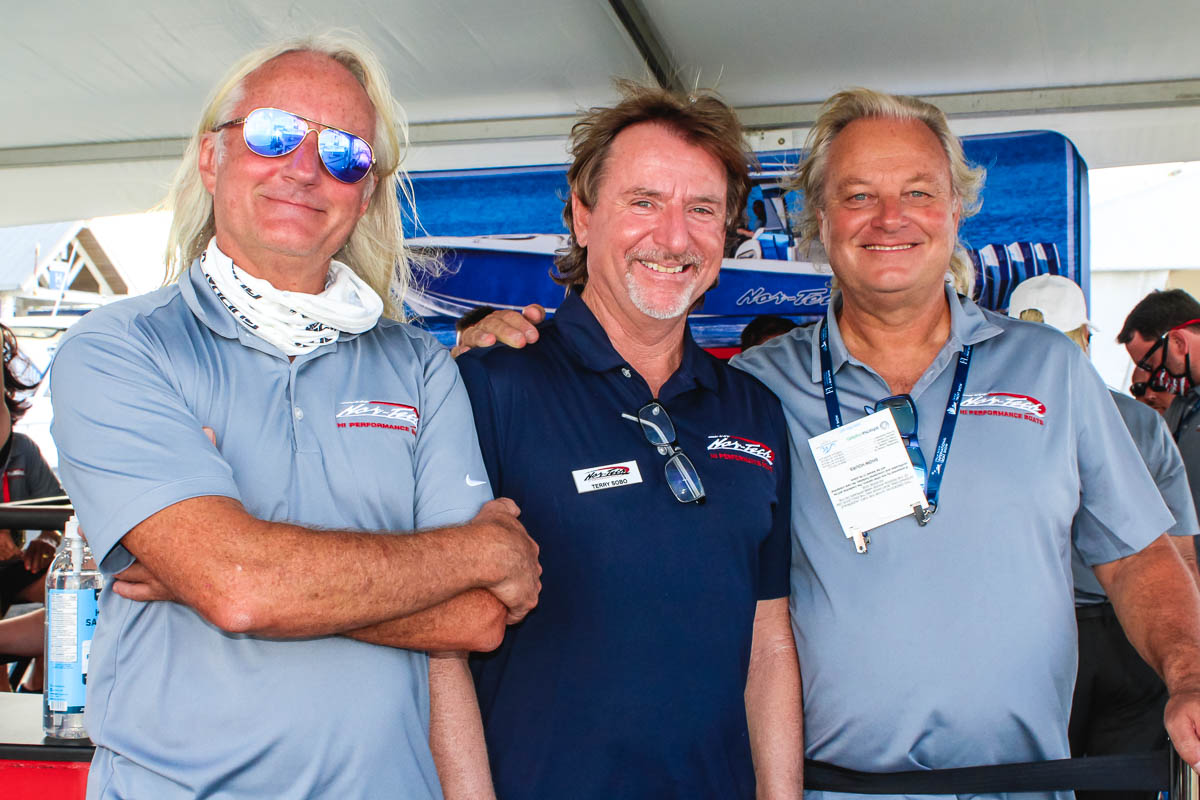 The next thrill came deeper into the Red Zone at MTI where the one and only twin-hull feline claimed its territory. Launched in August of 2019 and blowing minds ever since, the MTI 390X catamaran returned to the 2020 FLIBS ready to reveal its newly configured cockpit for eight. Color-matched throttles were the icing on the cake, and can take the double 450R Mercs to the 130 mph threshold running wide open.

A pair of over-the-top 42'center consoles sat stationary alongside the kitty luring showgoers on board with their luxuriousness to ogle and explore all that a loaded MTI offers. How about that new Garmin at the bow for 2021! For console connoisseurs interested in more than a standing room only tour, in-water demos on both a 42V and 390X were available from Randy and Taylor Scism all weekend long at Haulover Marine Center.

Routinely located just feet from the MTI masterpieces, this year there was a piece of the powerboat puzzle missing from its usual mid-dock dwelling and that was Performance Boat Center and Sunsation Powerboats. Luckily for anyone interested, PBC and Sunsation followed suit similar to MTI making appointment-only demo rides available in 36- and 42-foot Wright Performance catamarans and a Sunsation 40 CCX center console, not far off at the South Florida headquarters in Hollywood.

Sunsation Powerboats had even more to celebrate this past month with the recent arrival of its 100th Edition 32 CCX. For those not knowing the Sunsation history, the original motivation for tooling this model stemmed from the flat-lined death of the powerboat industry 12 years back, at a time when center consoles were still predominately geared for the anglers among us. The 32 CCX made its debut at the 2015 Fort Lauderdale International Boat Show, and was the middle sister like Jan on "The Brady Bunch" slotted between the 29- and 34-foot models.

Destined for delivery to Performance Boat Center in Osage Beach, Mo., the yellow and black milestone hull No. 100 comes dressed with twin 450Rs and doles out 85.4 mph, making it the brand's fastest moving 32-footer to date. RDP salutes both Sunsation Powerboats for the remarkable build and PBC for closing the deal on 50 of the 100 that have been designed. 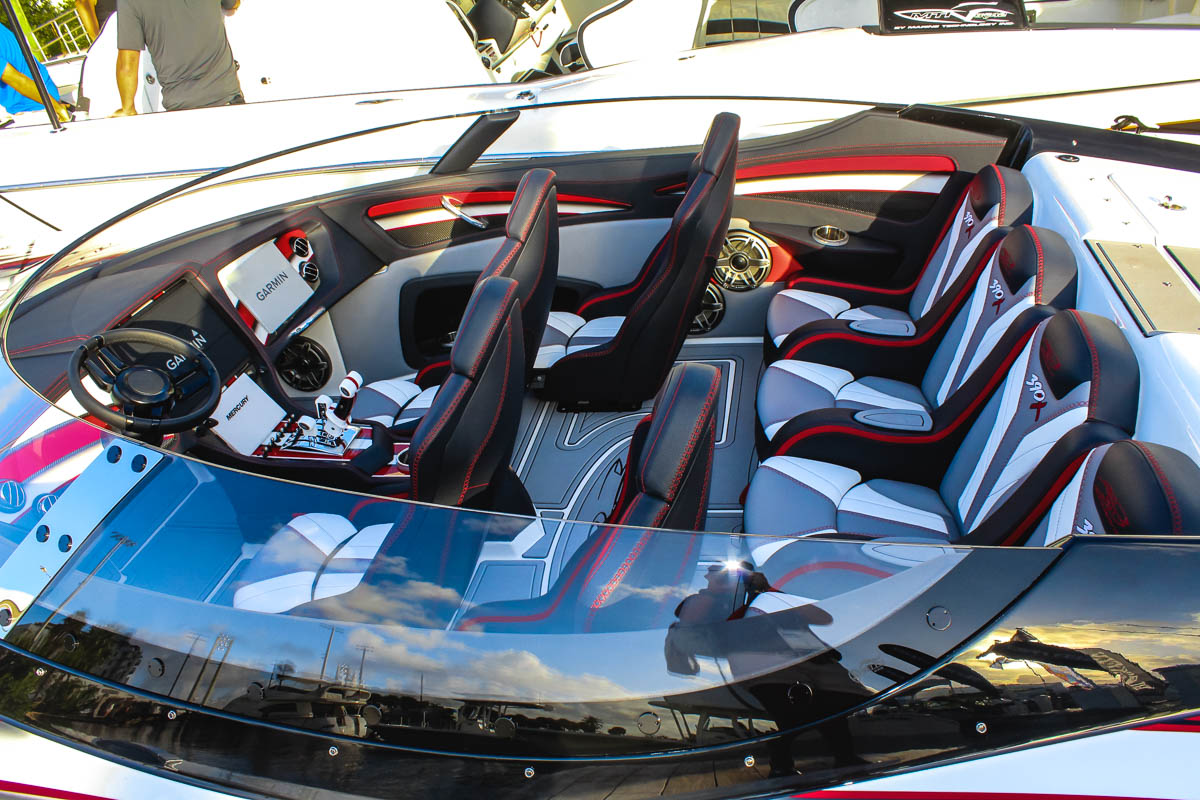 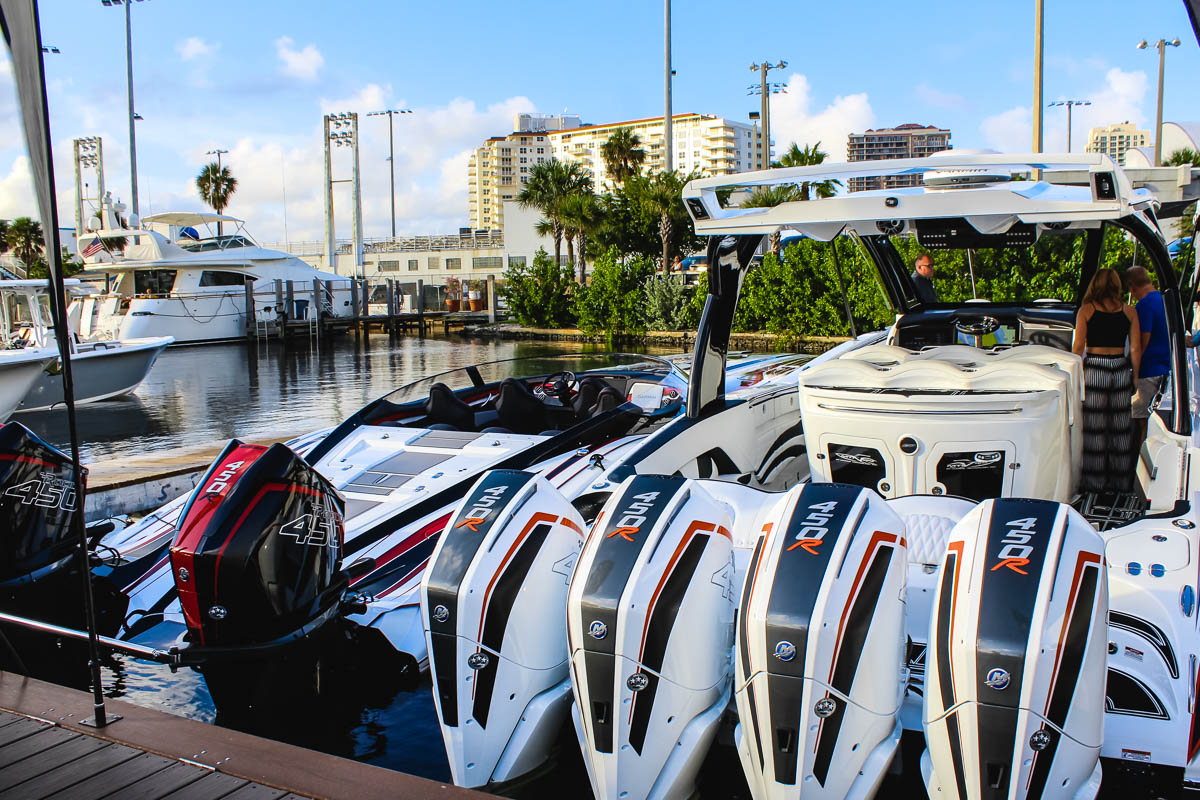 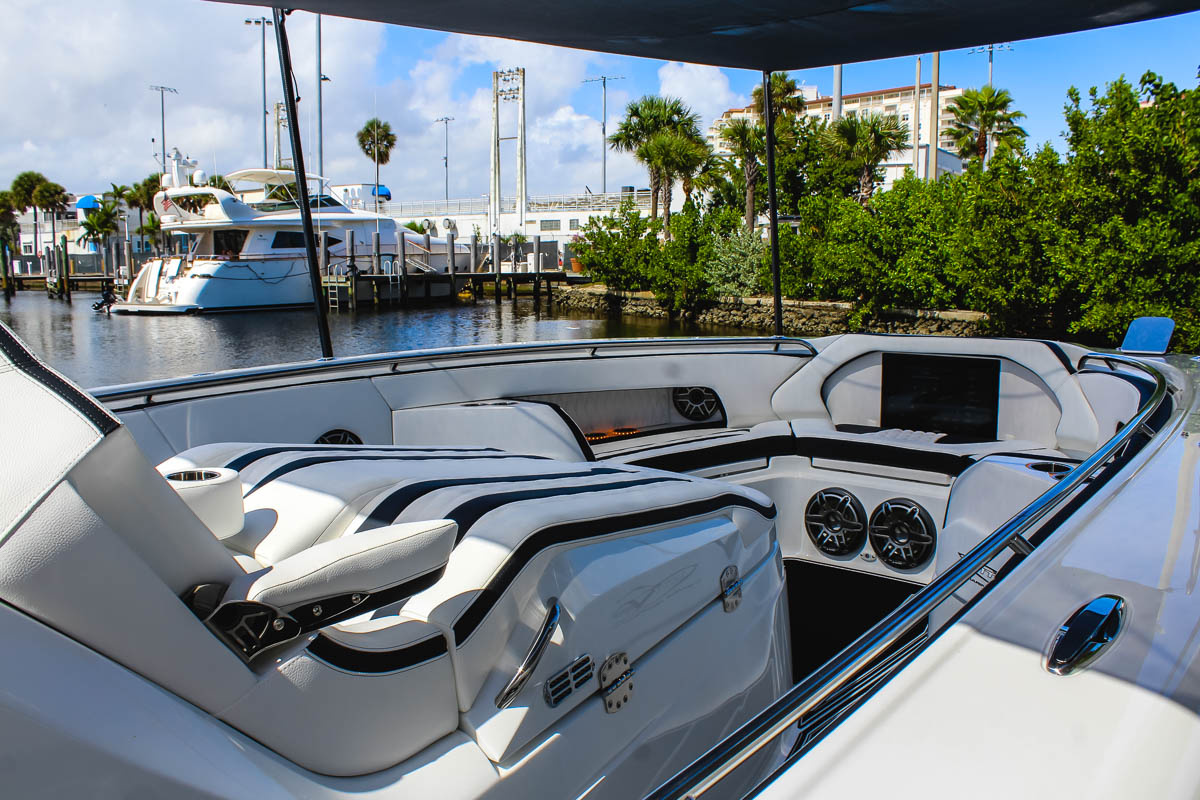 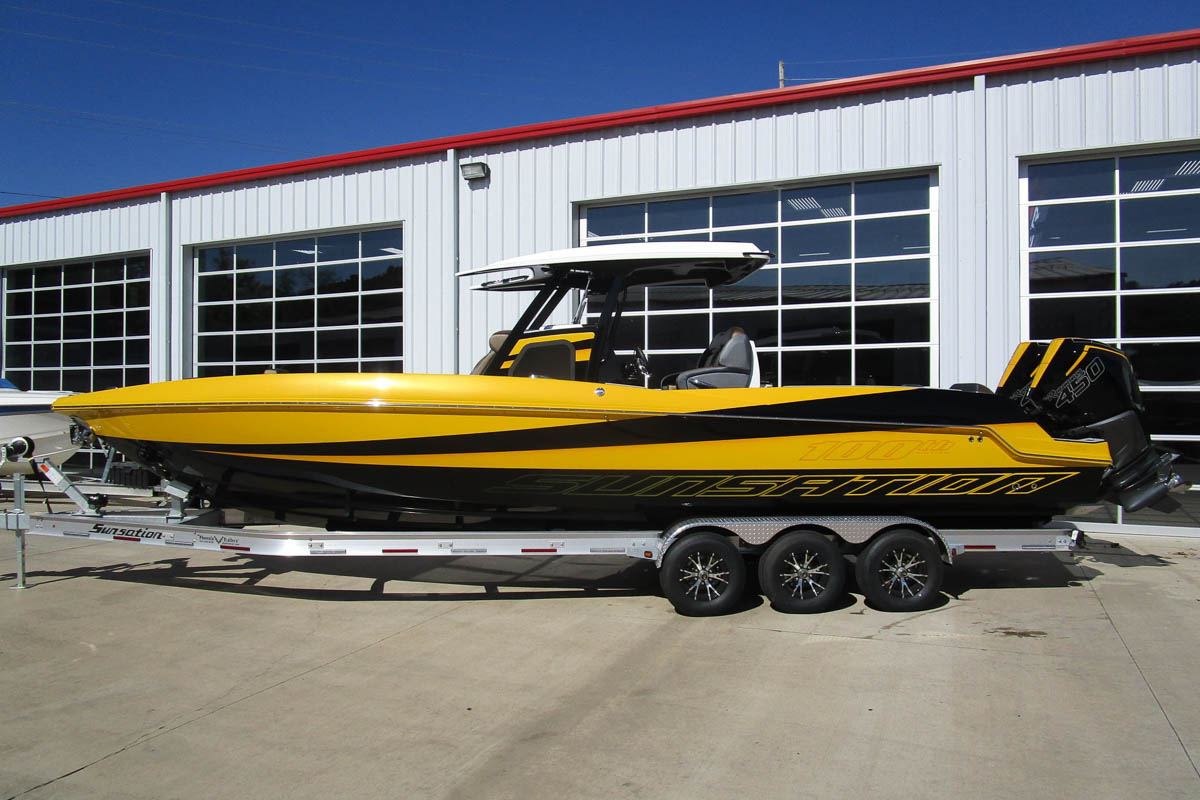 My boats du jour tour continued at the Mystic Powerboats and Jaguar Powerboats floating camps. First to grab my attention was burgundy M3800 and deep blue M4200 combo laid out one in front of the other at Mystic. Director of sales and marketing Greg Weber proudly pointed out the maker's latest customer-requested upgrades such as the enhanced bow seat position options, and the increasingly popular slide-out cooler that provides guests more open deck space and serves as a rear-facing seat during sandbar and sundown sessions.

Jaguar Powerboats fervently revisited the South Florida docks after receiving such positive feedback from the Miami premiere of its Jaguar J43 (profiled on RPD in April). Equipped to impress the masses even more, Jaguar used the FLIBS as a launching pad to release the renderings of its upcoming 36 Offshore Fish.

Company president John Clarke and his team have partnered with consultant and designer Mark Tackley-Goodman on this unique vessel. Clarke explained, "The 36 Offshore Fish rests on Jaguar's trademark racing legacy but with a built-to-fish frame of mind combining uncompromising safety, structural stability and mind-blowing high speeds." Even more exciting, the 36-footer is only the first in the series; Jaguar plans to welcome a smaller 32' model as well as a larger version based off the world-renowned Coca Cola wide-body racing hull. 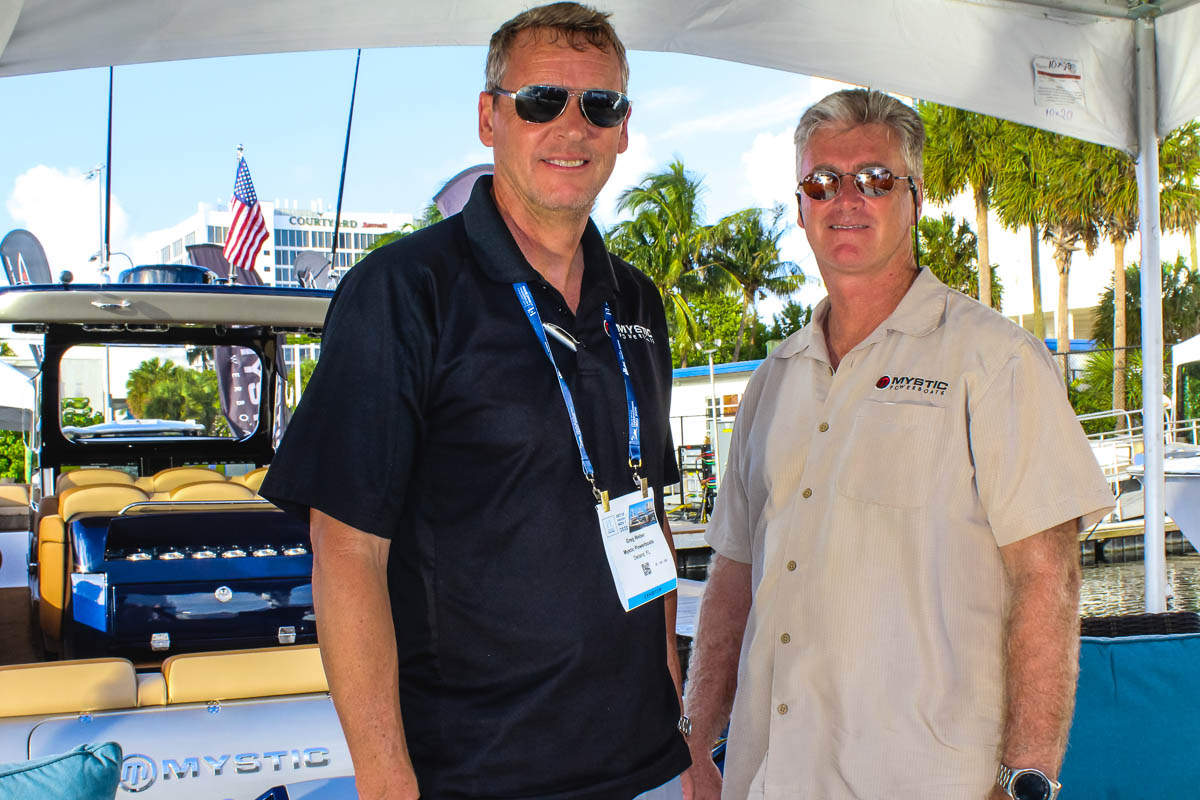 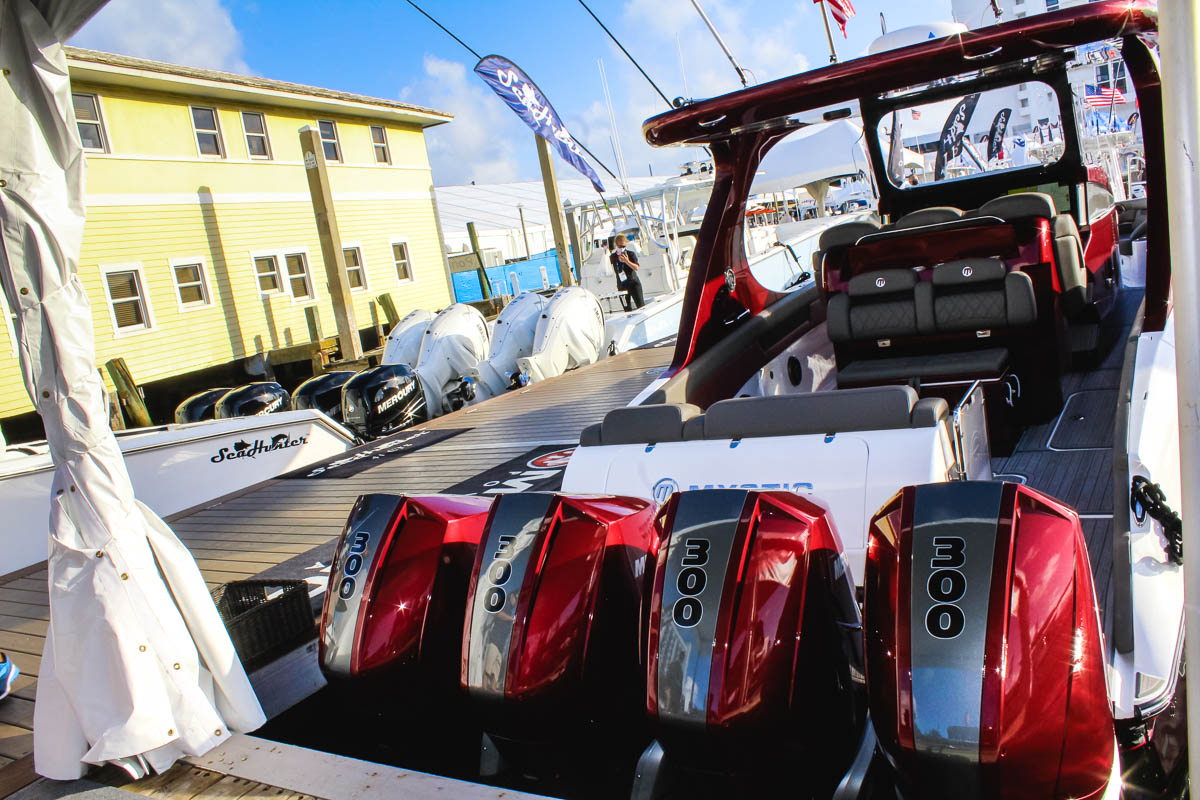 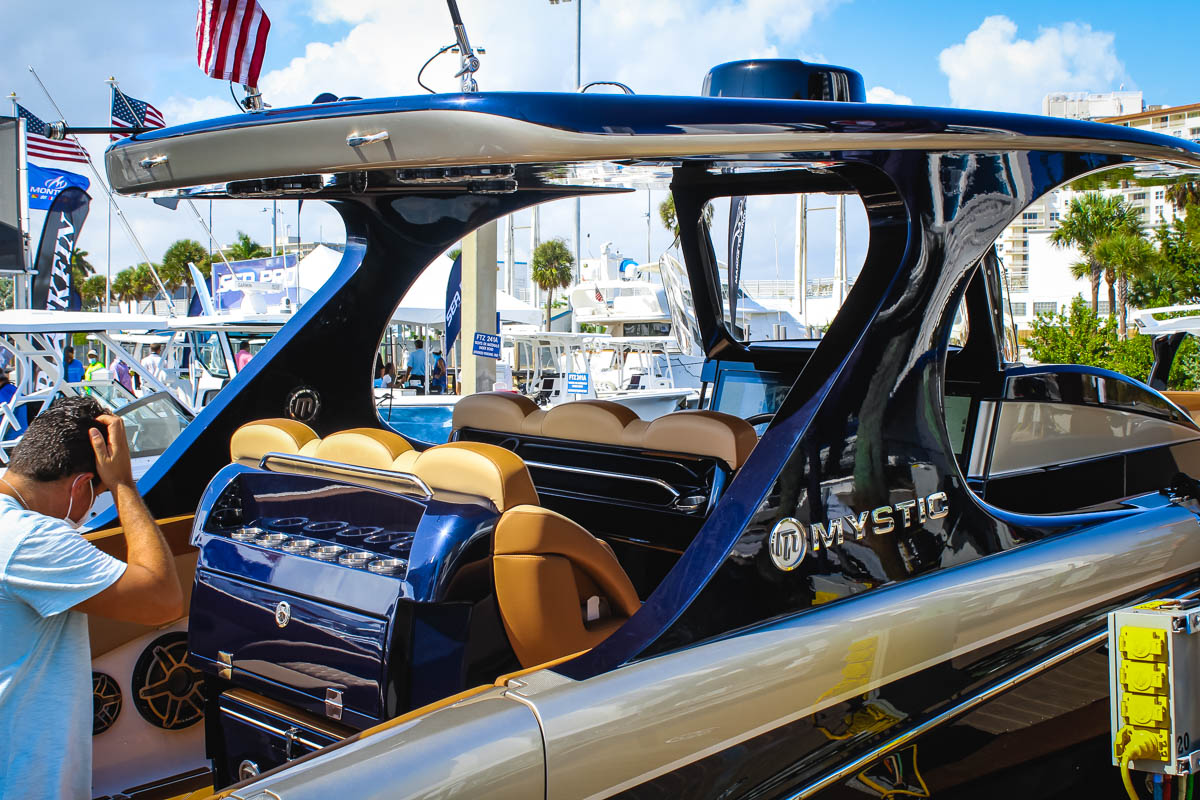 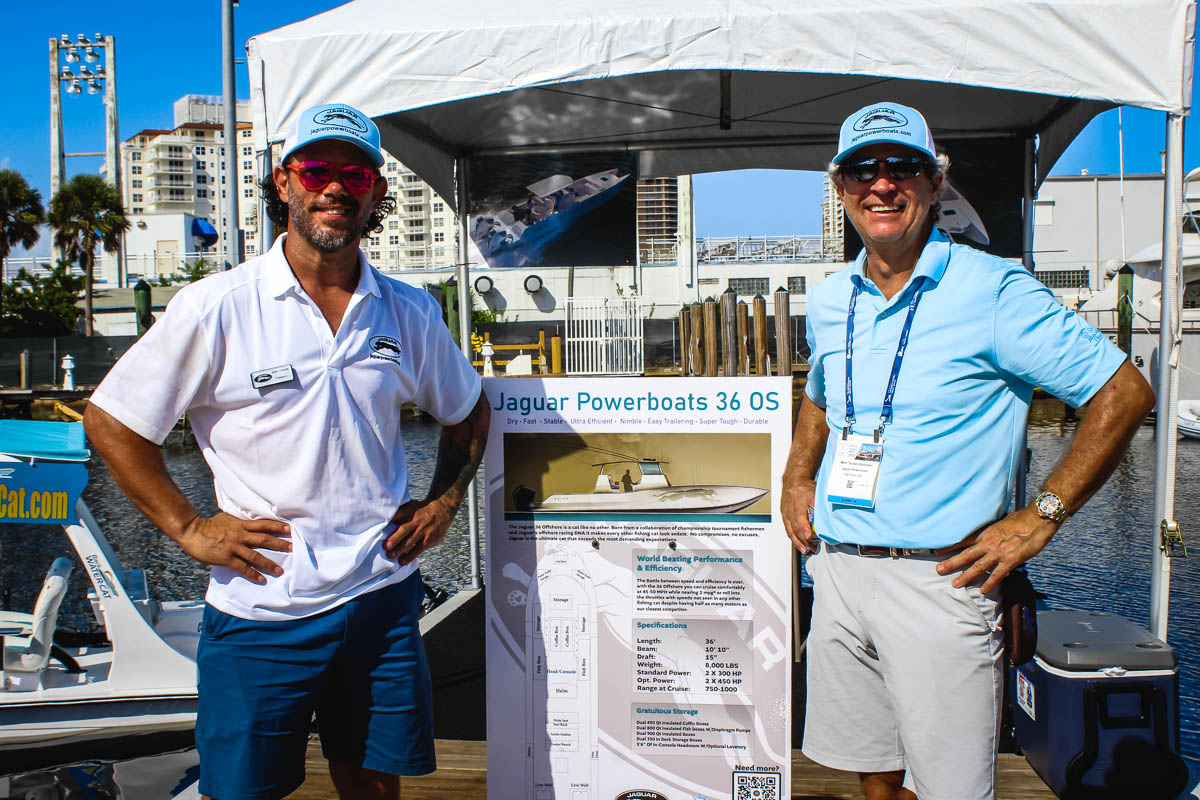 Next it was time to hit the tents to check out the toys, tech and Titos cocktail offerings at the chill-out indoor bar. Of course this meant moseying over to the mother of all motors exhibit to see what Mercury Marine was touting. As I was awkwardly trying to scope out potential new products on display, I met Paul Petani, the sales director for Fell Marine. Petani noticed me pensively probing around and took a few moments to talk to me about the 1st Mate Marine Safety and Security System.

While the wireless technology has been around for six years, this is the industry's first engine-integrated intelligent hub that links marine propulsion with a wearable fob for the captain and up to seven passengers. Connected to a mobile app, the 1st Mate Marine Safety and Security System literally places confidence in the palm of your hands with overboard alerts, distress messaging and theft-deterrent capabilities. The 1st Mate Marine is being offered exclusively for Mercury customers but the system is fully compatible and available for use with other leading outboard engine makers. Smartly priced between $570 and $700, not only is it highly recommendable for you and your crew's wellbeing, it usually entitles watercraft owners for five percent insurance savings, which can certainly add up! 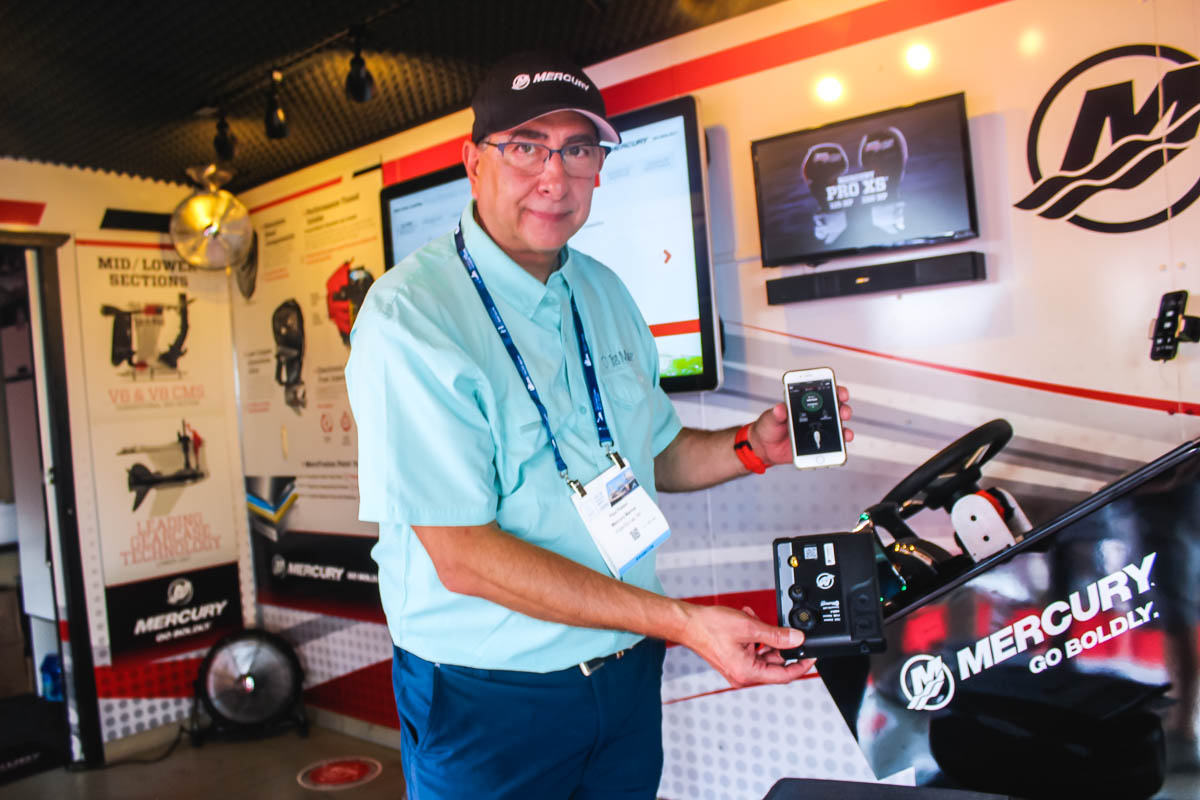 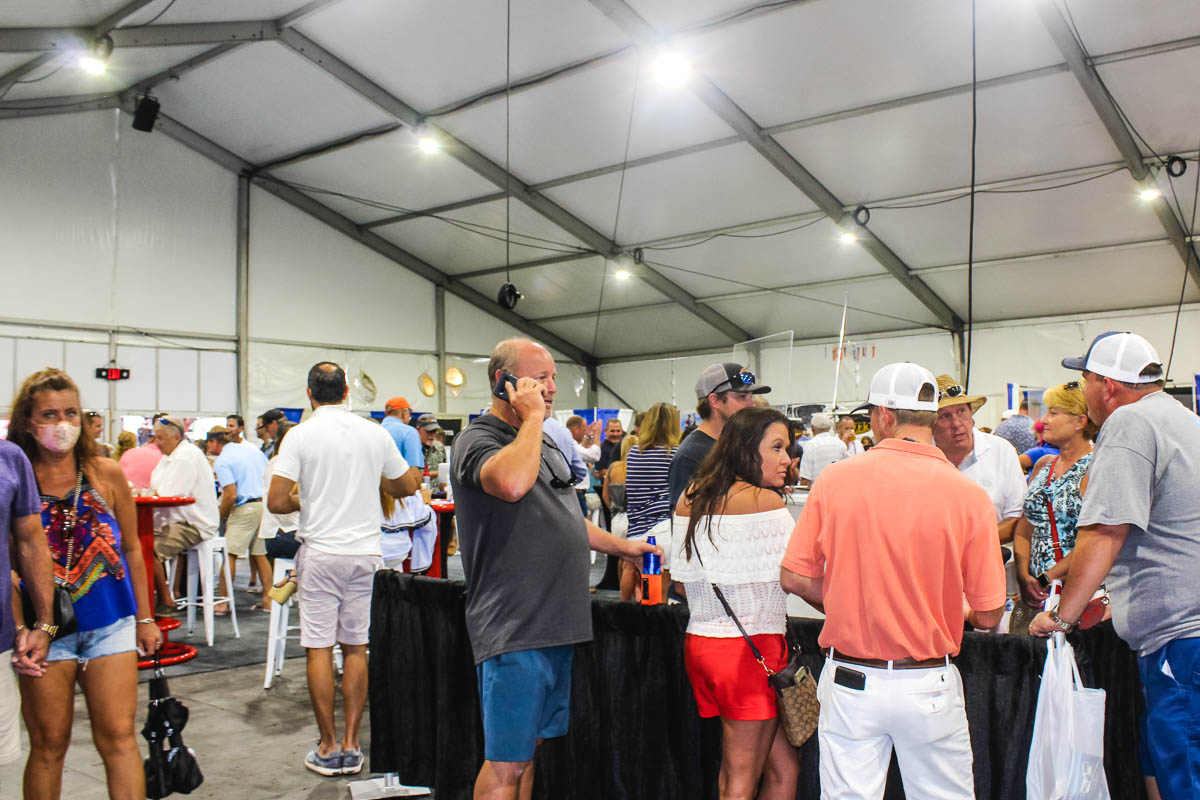 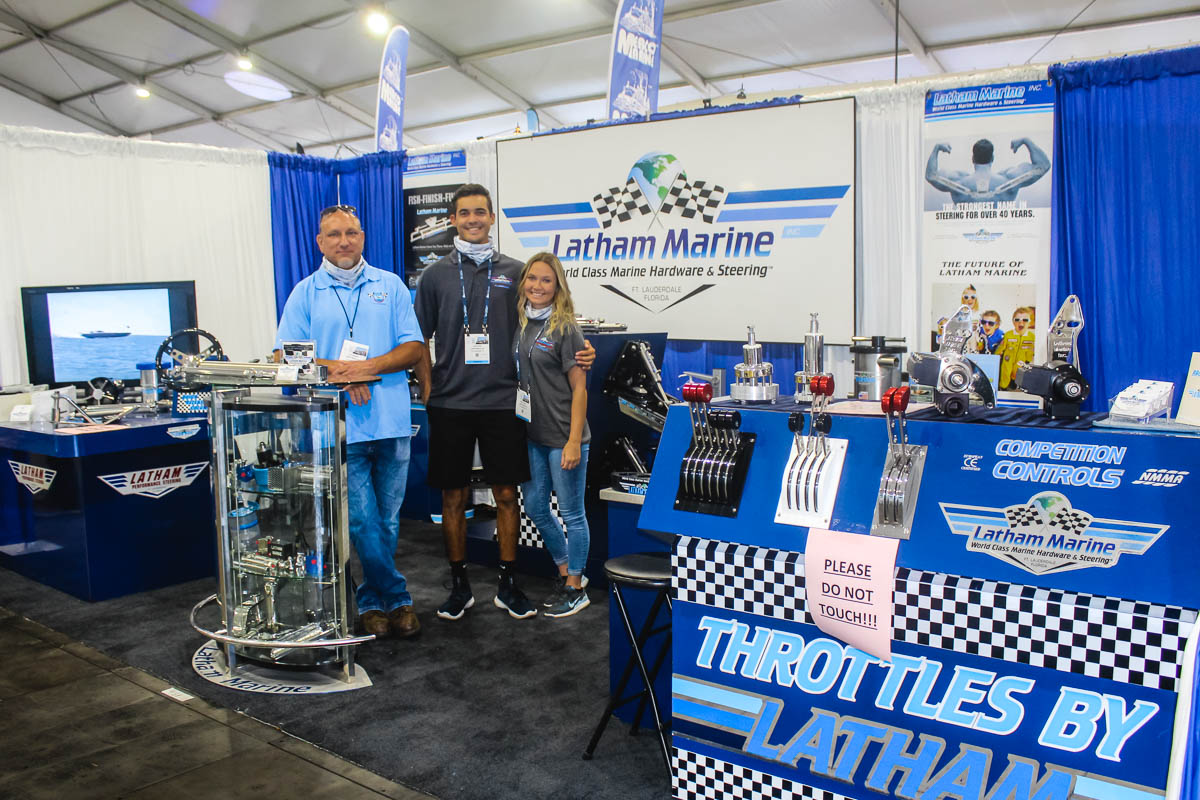 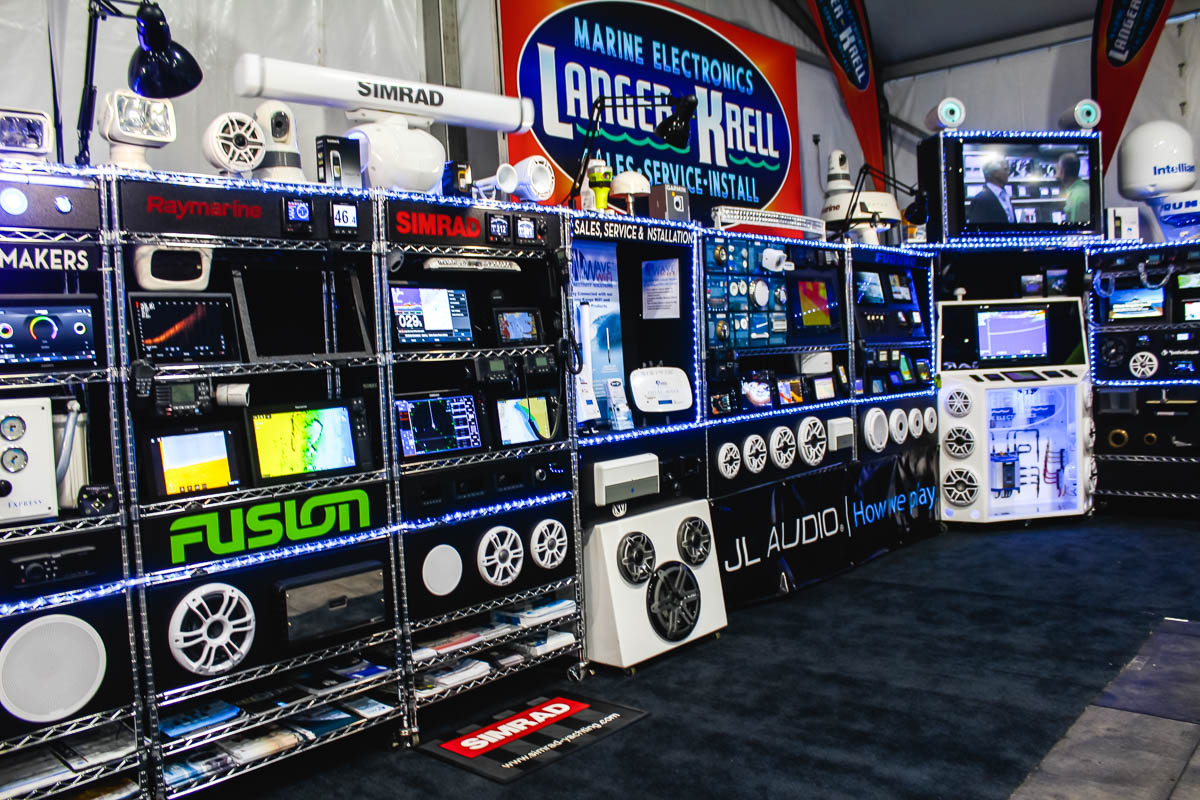 For the remaining days besides making tracks up and down the outer piers bonding with the big boy Pershings, Vikings and Sunseekers, the majority of my hours were spent gathering content on the endless, and I do mean endless, new editions from the luxurious center console lines such as: Caymas, Fountain, HCB, Intrepid, Scout, SeaVee and Solace – all of which will be presented on our partner website Luxurycenterconsoles as individual feature stories.

So, with spirits and spending patterns soaring, the one low of the show while technically not related to it did nonetheless became the talking point of the entire weekend... and that was waking up Thursday morning to the surprising-slash-unsurprising revelation that the 2021 Miami International Boat Show had been 86’d.

Maybe this was good news and the latest Chinese convid-casualty cancellation hurried along the closing of a few extra deals here in Lauderdale. Who knows! One thing is for sure, the Miami Boat Show Poker Run hosted by the Florida Powerboat Club from the 18 to 21 of February will be nothing short of epic. Every high-performance powerboat manufacturer will be using the poker run gathering as an alternate for the nixed Miami Show. Trust me, the chatter has already begun and the baller brands are amped-up and ready to bring it! 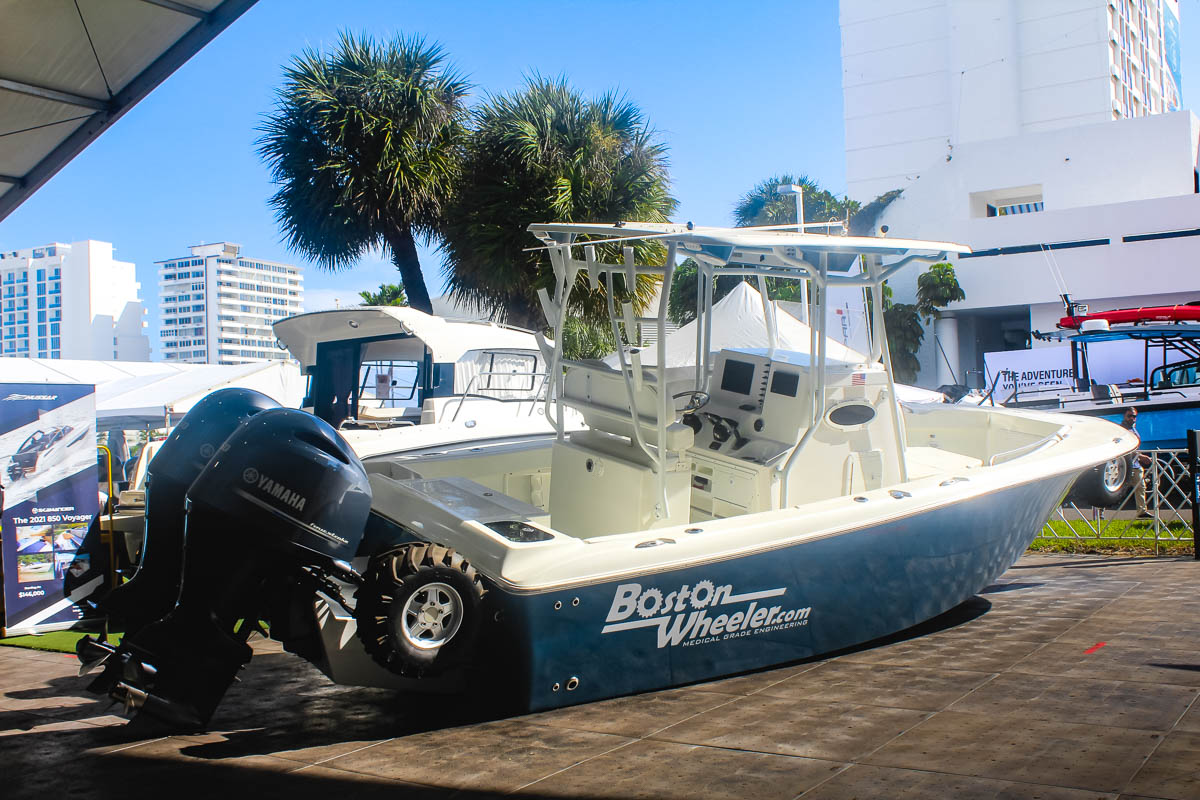 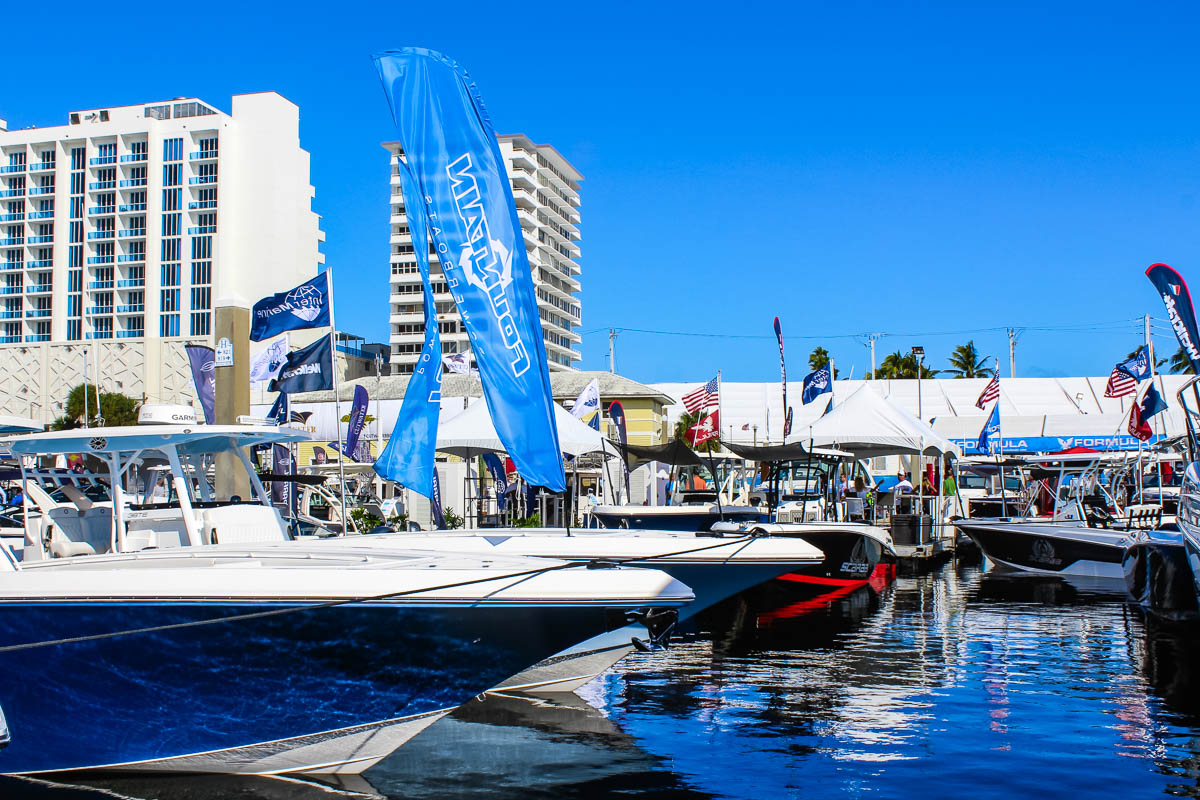 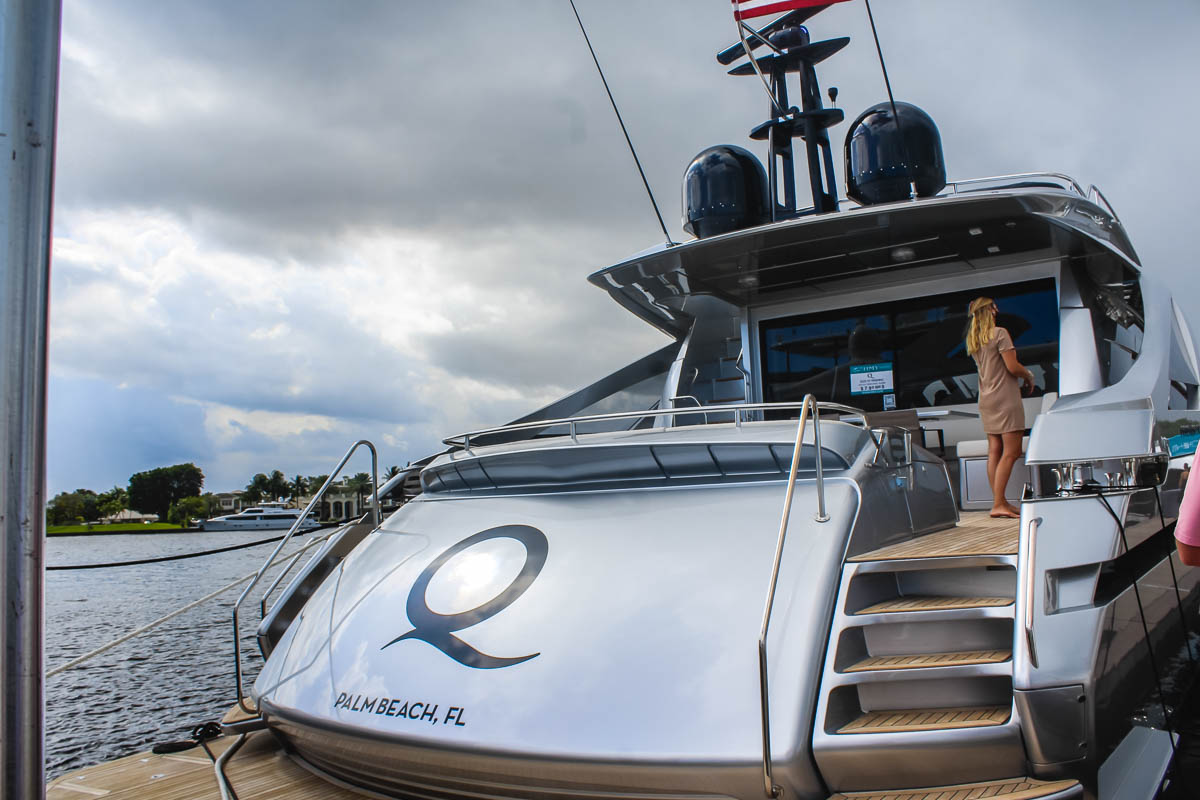 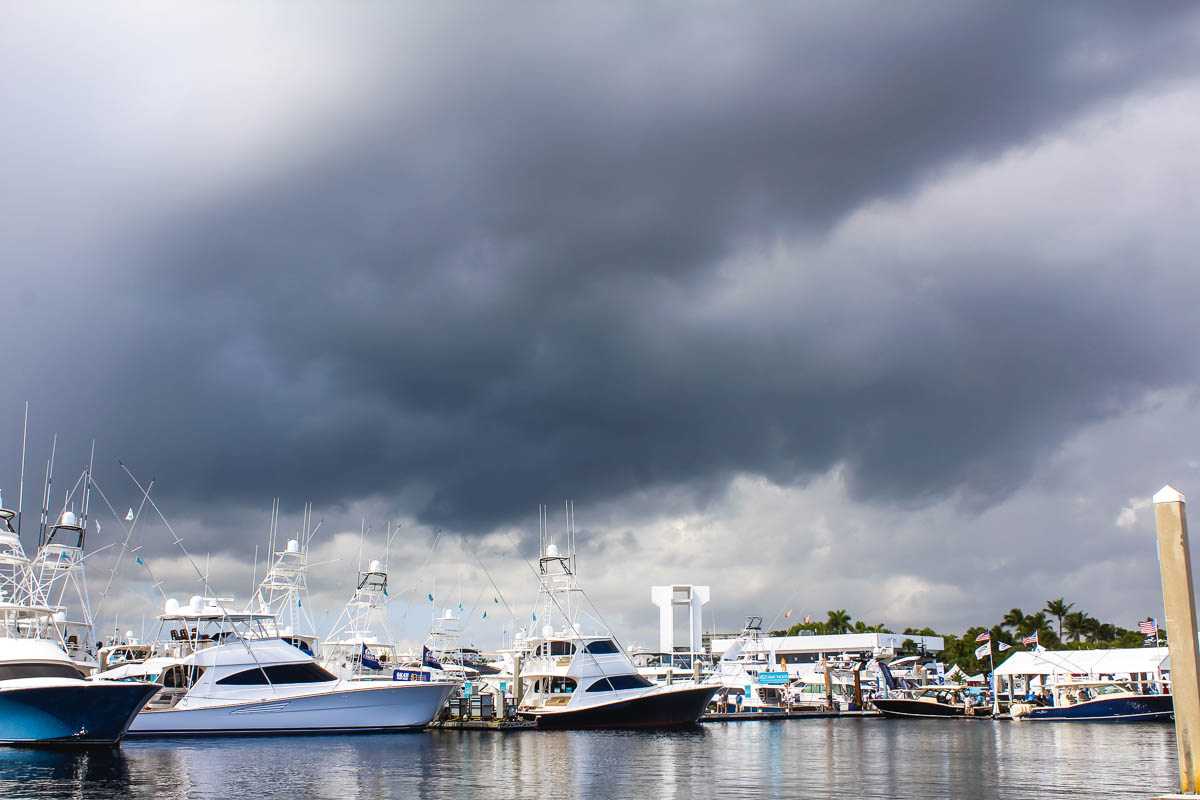