A DAY AT THE BEACH

Most power boat racing fans just refer to it as “the beach.” Eighty–one years ago there wasn’t a motorboat to be seen at Long Beach Marine Stadium, a city icon now recognized has a historical landmark. Instead, it was the site of the 1932 Olympic Games rowing championships and the first man-made rowing stadium in the United States.

Since then, Long Beach Marine Stadium has been the home of all kinds of aquatic festivities and oddities from 200+ mile an hour drag boats and world water ski speed records to furiously paddling dragon boat racers and much-dedicated collegiate rowing teams.

Although Southern California power boat racing suffered a crippling blow in the late 1970s when Long Beach City government decided racing was too noisy for the growing residential community around it, one event per year still survives….the annual Long Beach Sprint Nationals, sponsored by ARP and conducted by the Southern California Speedboat Club and RPM Racing Enterprises every August. 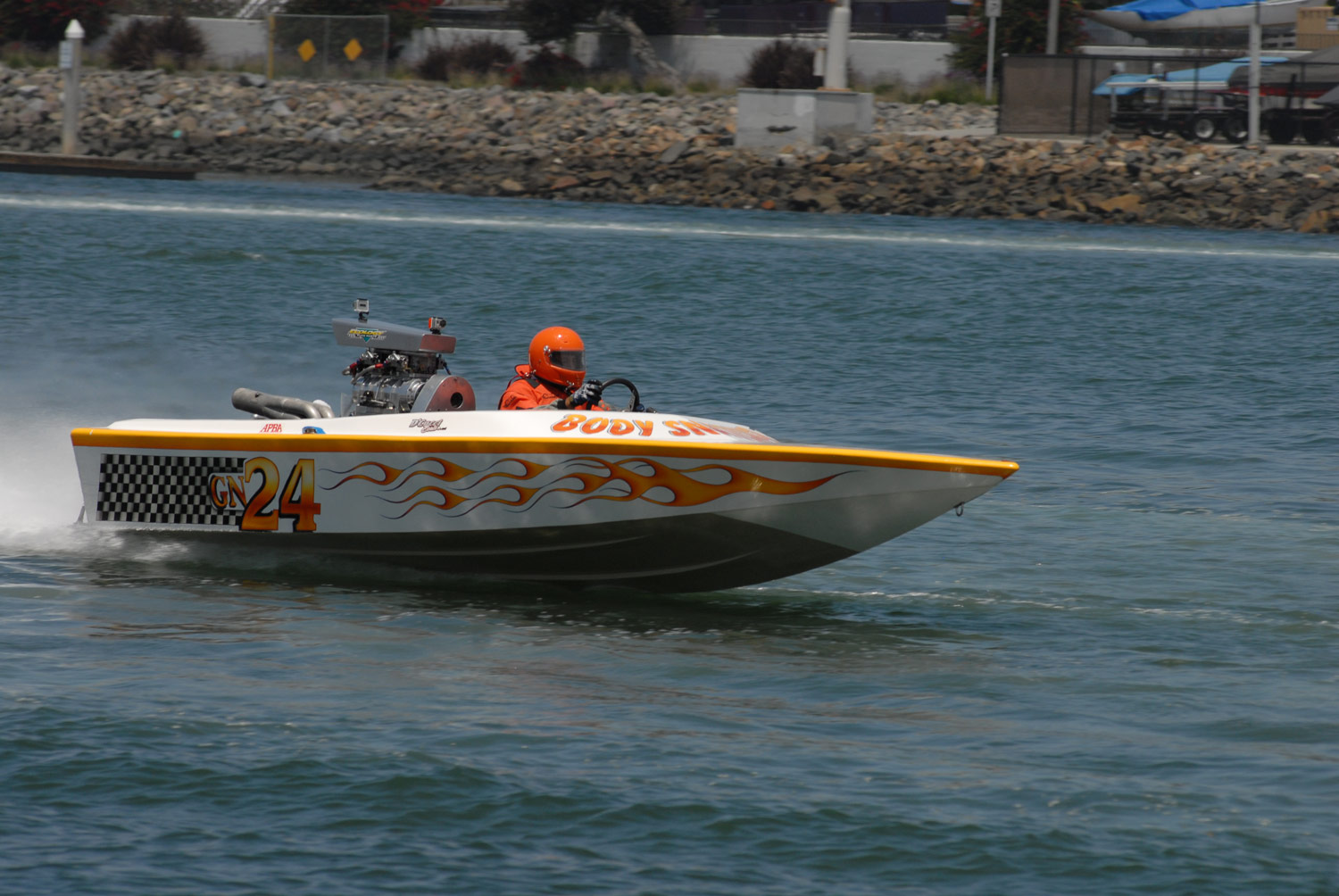 As usual, diversity is the name of the game at the Long Beach Nationals. Everything from knee jockey stock outboard runabouts to the 2000 horsepower fire-breathing K-Boats are on the water. And as for spectators, there’s no better venue in boat racing to watch the action up close than Marine Stadium.

In 2013 two APBA National Championships and one North American Championship title were on the line along with eight other surprisingly full classes. As expected, the battle for the North American SST-45 crown narrowed to the two pre-race favorites, RJ West and Jason Williams. When the point totals were tallied on Sunday afternoon, it was West the winner in a close contest with Williams runner-up.

The much-horsepowered Grand National class with supercharged engines is always a crowd pleaser, and with a National Championship hanging in the balance, the competition escalated to the next level. Joey Cucci driving the “Body Snatcher” was flawless all weekend, executing jack-rabbit like quickness off the beach on every modified LeMans start to take a commanding lead from turn one to the checkered flag. Cucci couldn’t coast to victory, however, as Heath Heibert pressed the pace from start to finish with a strong second place performance.

The always exciting Comp Jet class didn’t disappoint where the unexpected routinely is the norm. The eventual 2013 National Champion was Tom Bandy, a well known jet boat drag racer who demonstrated he also knew something about turning left on the tight Long Beach course. Bandy bounced back, however, from a rough first qualifier race on Saturday when he spun out in a turn and cost himself an almost certain heat victory to take the overall title.

The busiest and most successful driver of the weekend was Robby Devine, a former standout in the Grand National class who has now moved on as the resident shoe for the multi-boat stable of Tom Buckles. Devine nabbed overall wins in both the Pro Stock and K-Boat classes and added a very respectable third in Super Stock. The K-Boat class also had the wildest crash of the weekend when Chris Irick of Lake Havasu City, AZ up-ended his immaculate K-034. Fortunately, Irick exited the boat cleanly without suffering serious injuries. 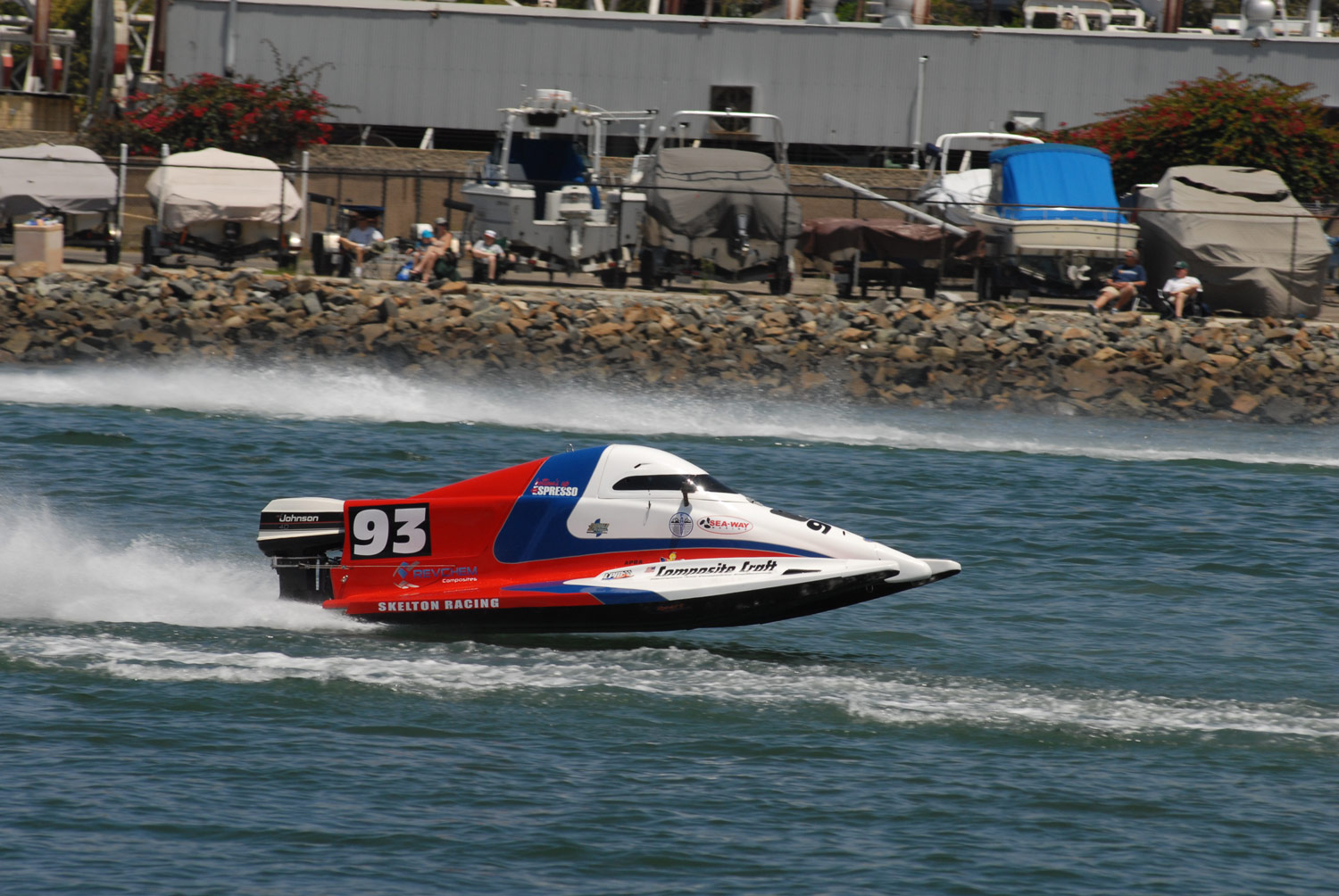 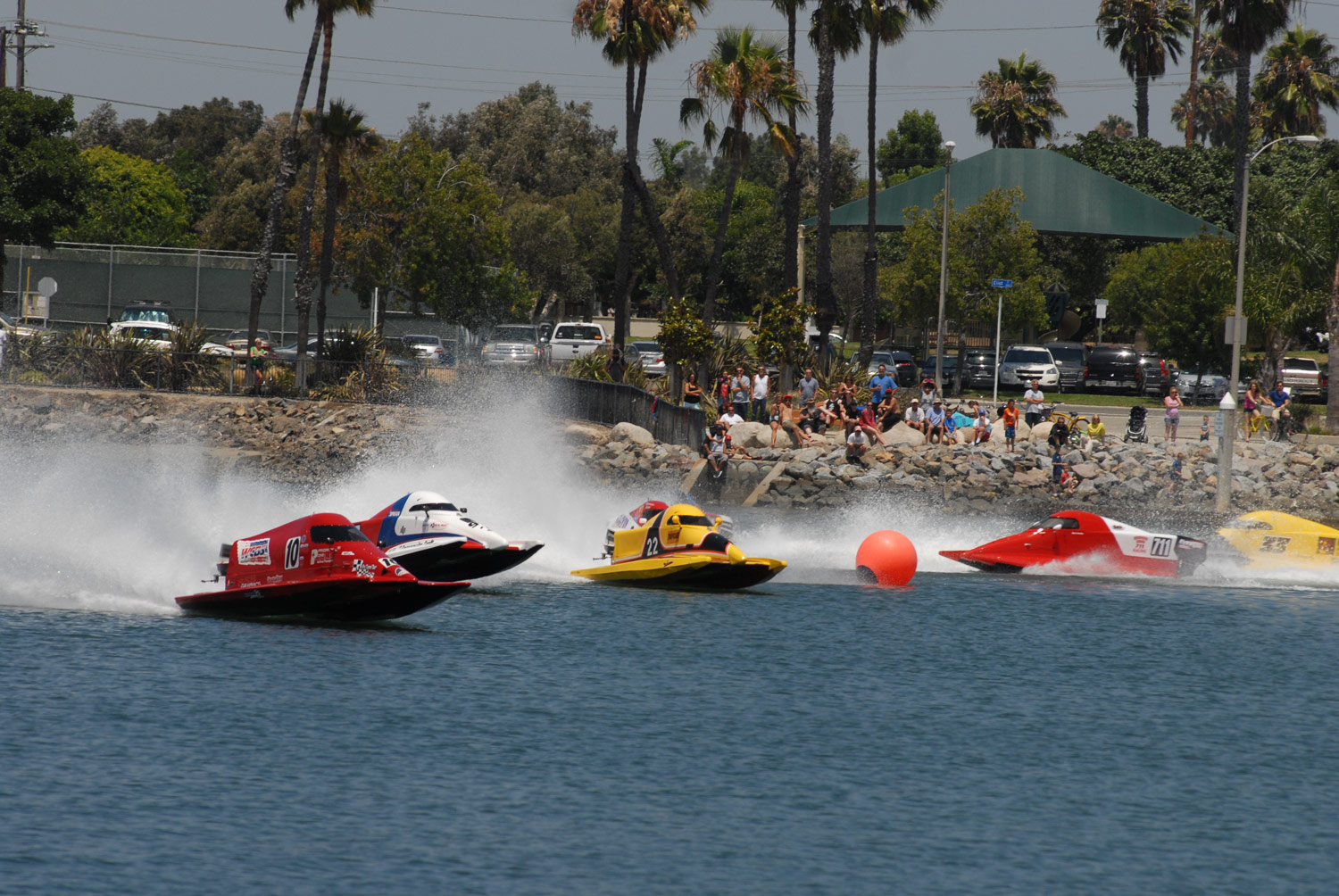 Things always are crowded in the first turn of SST-45 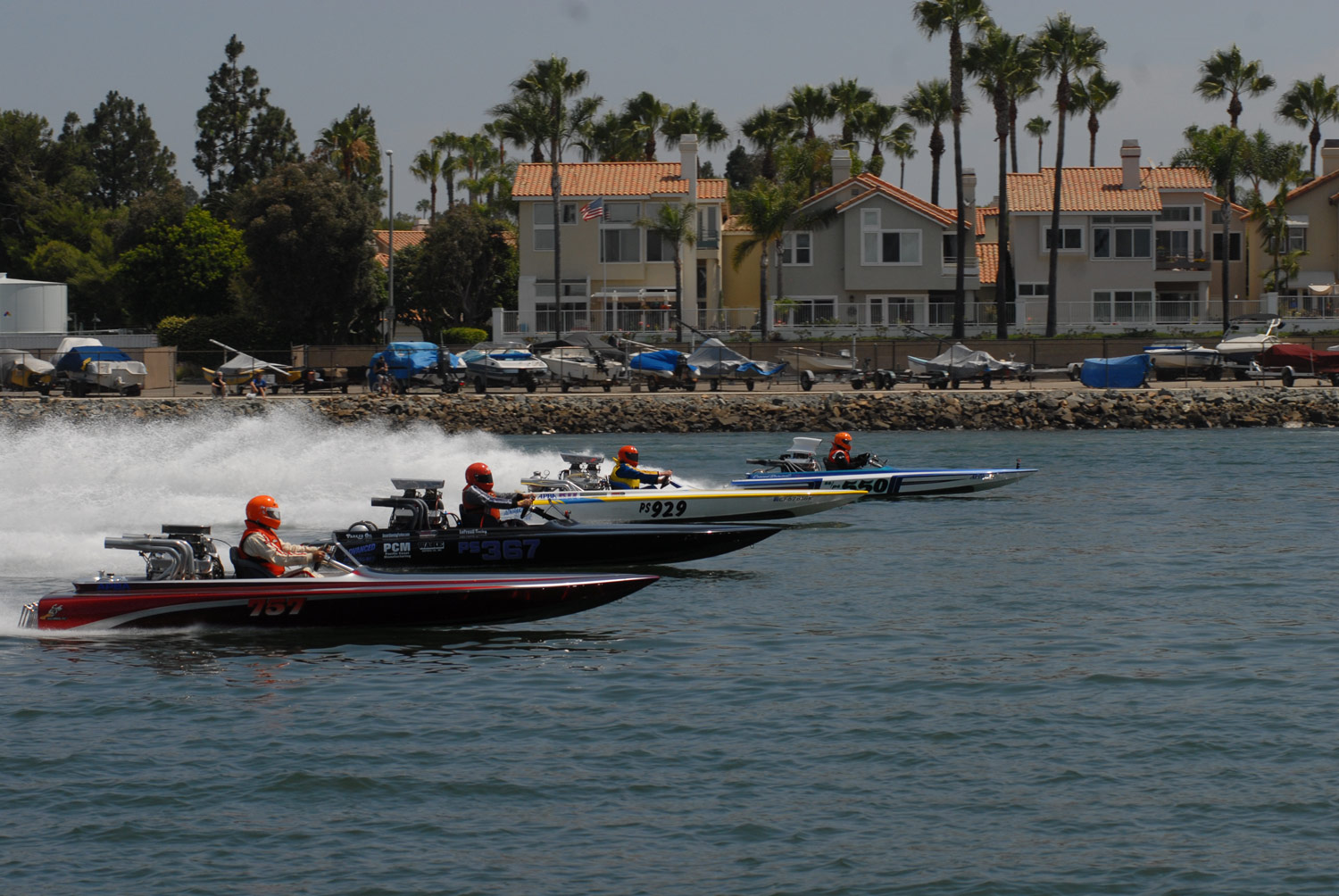 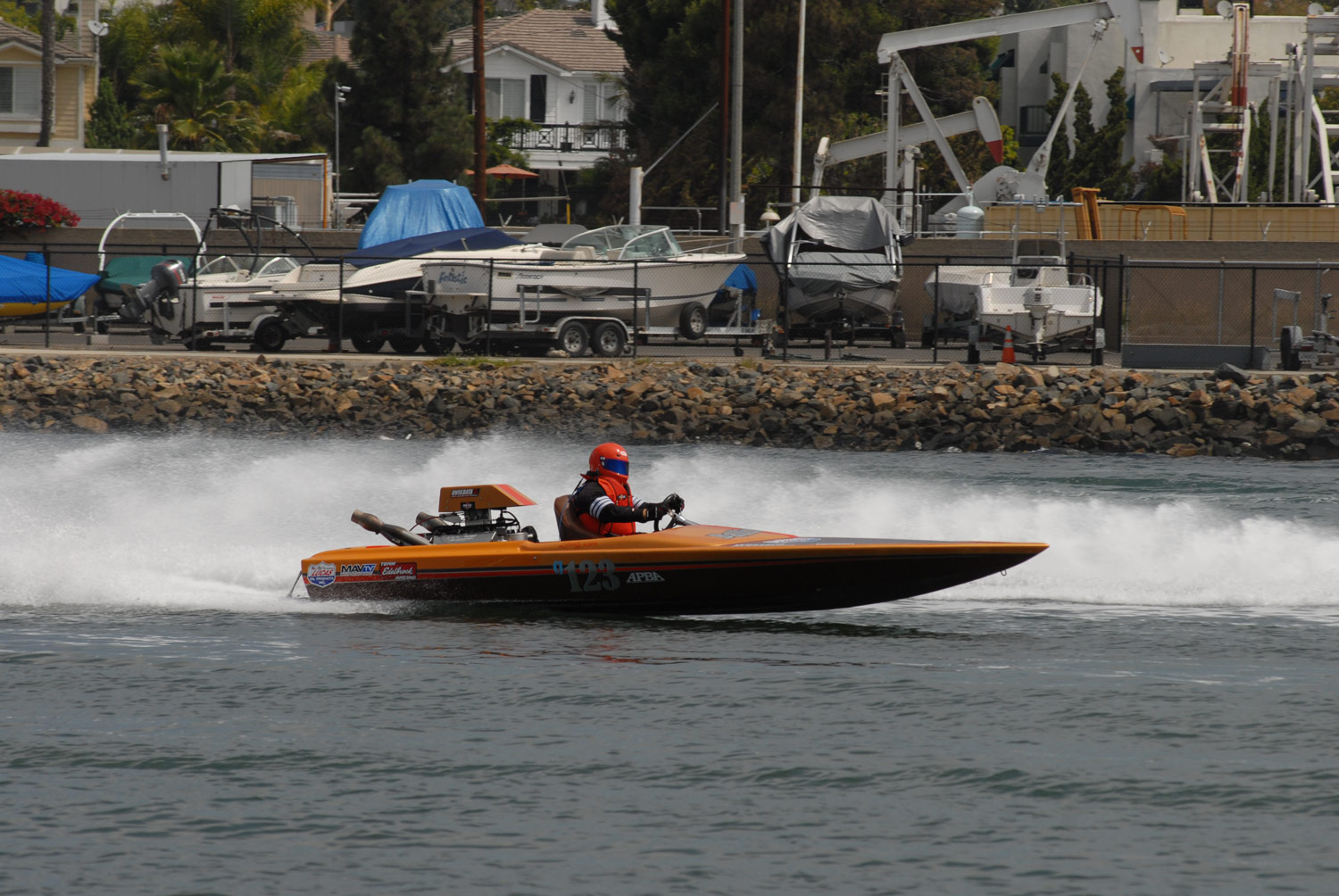 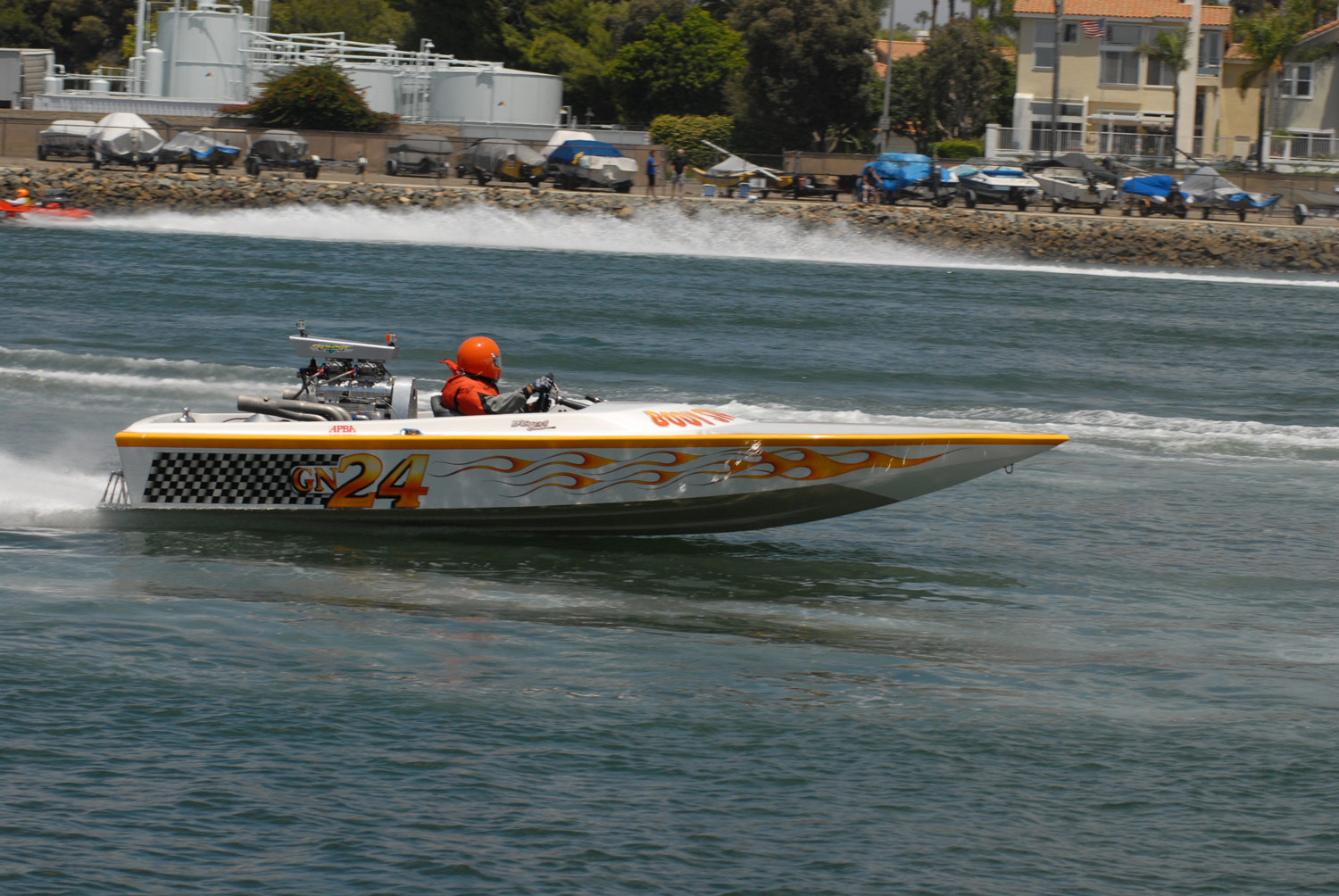 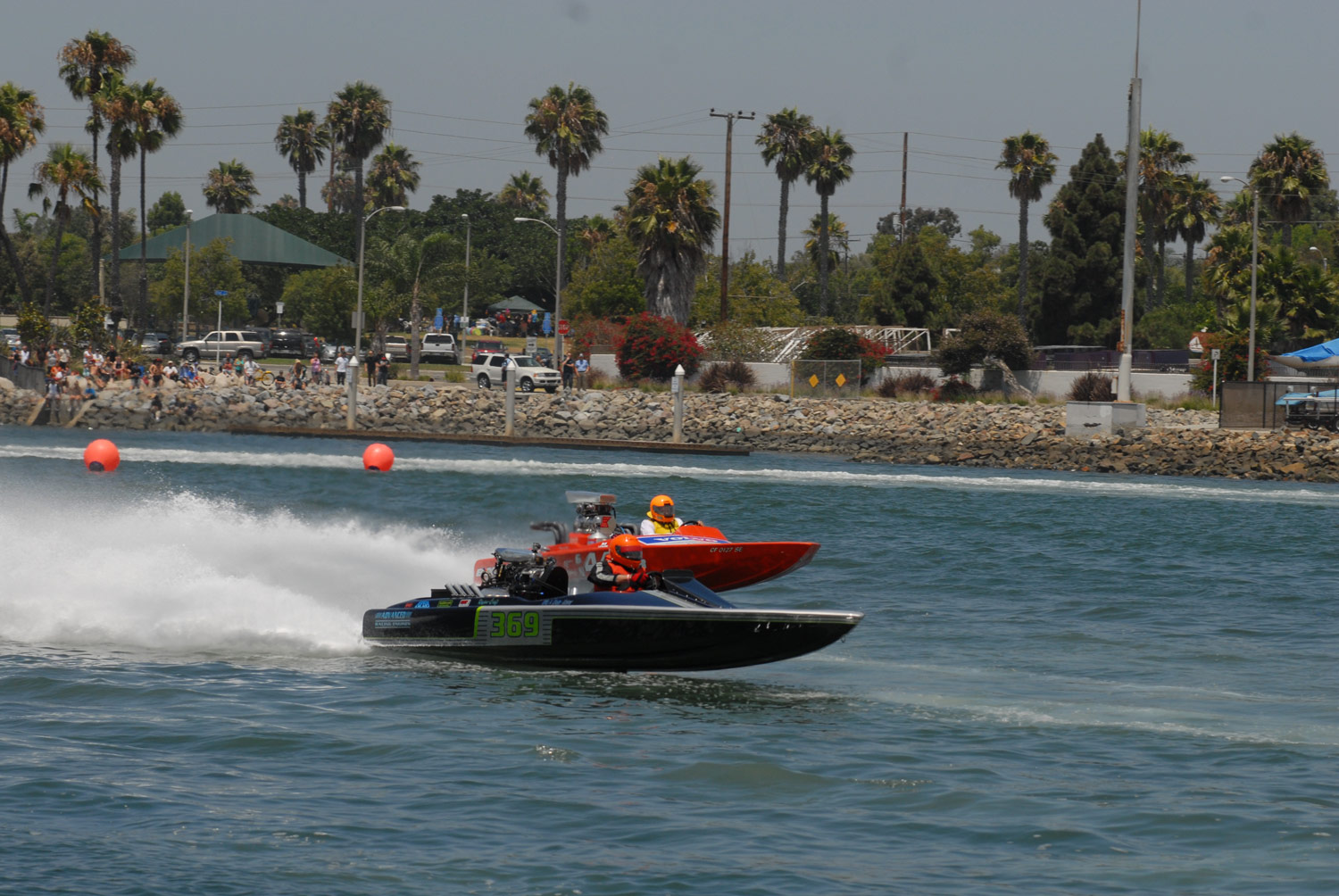 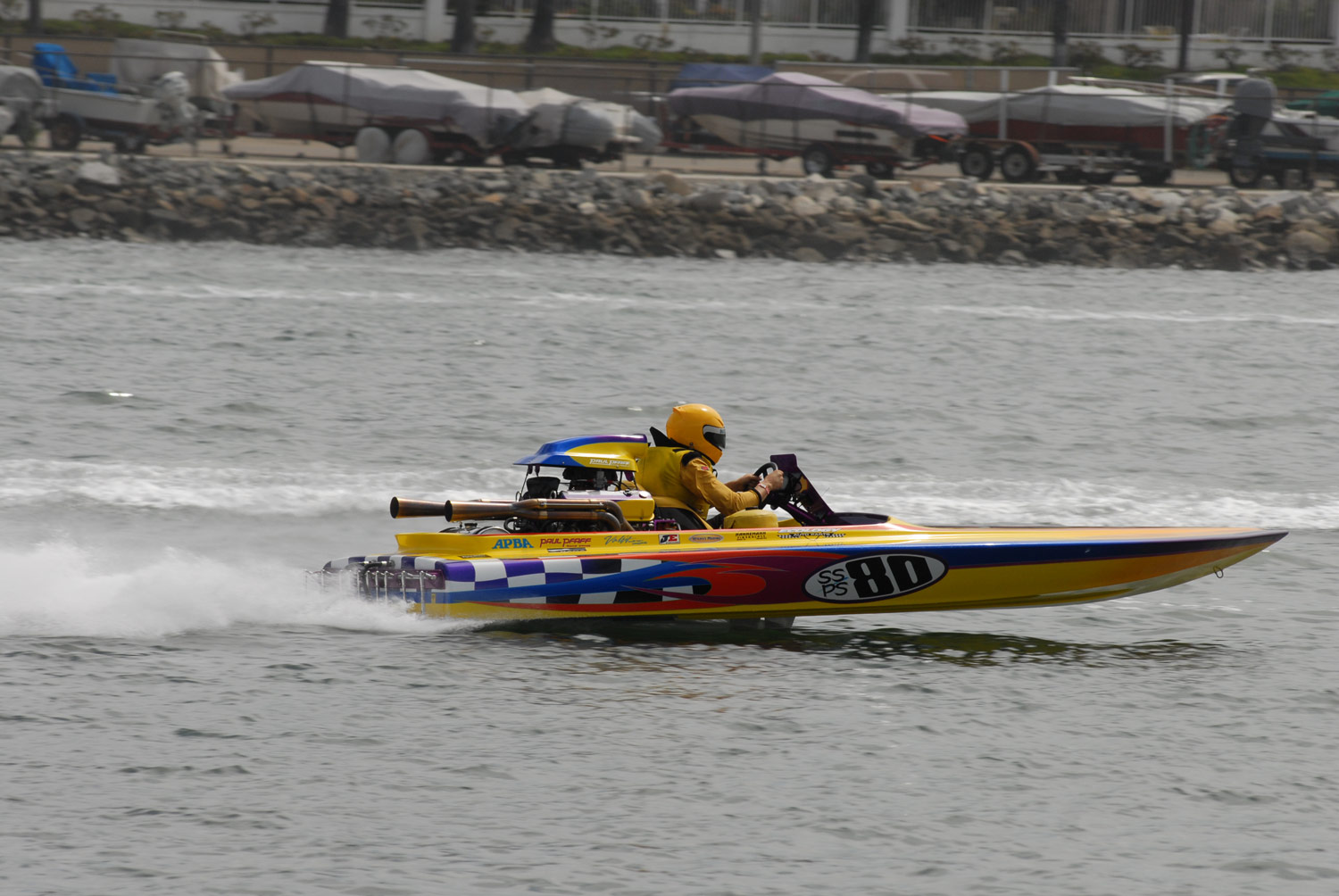 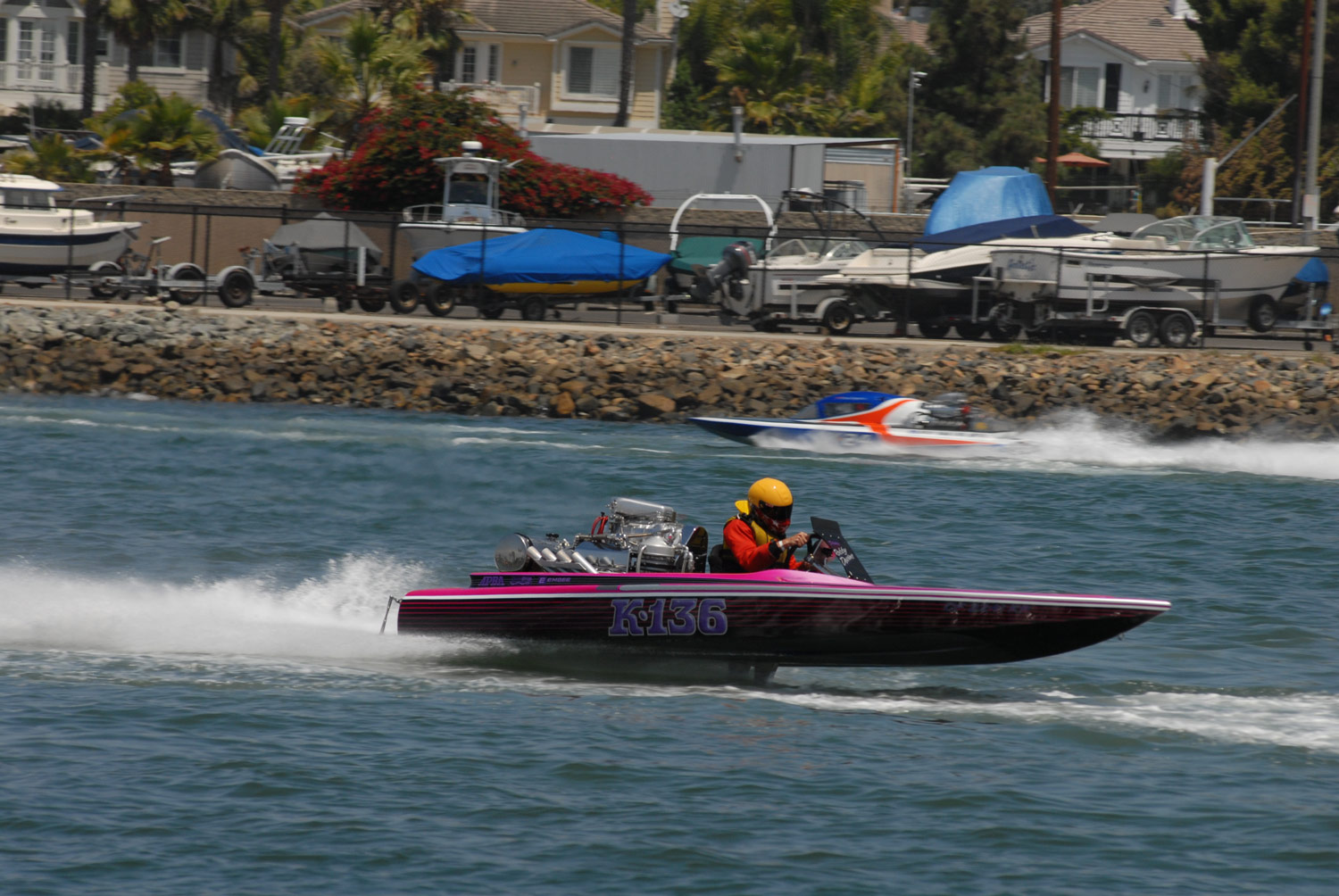 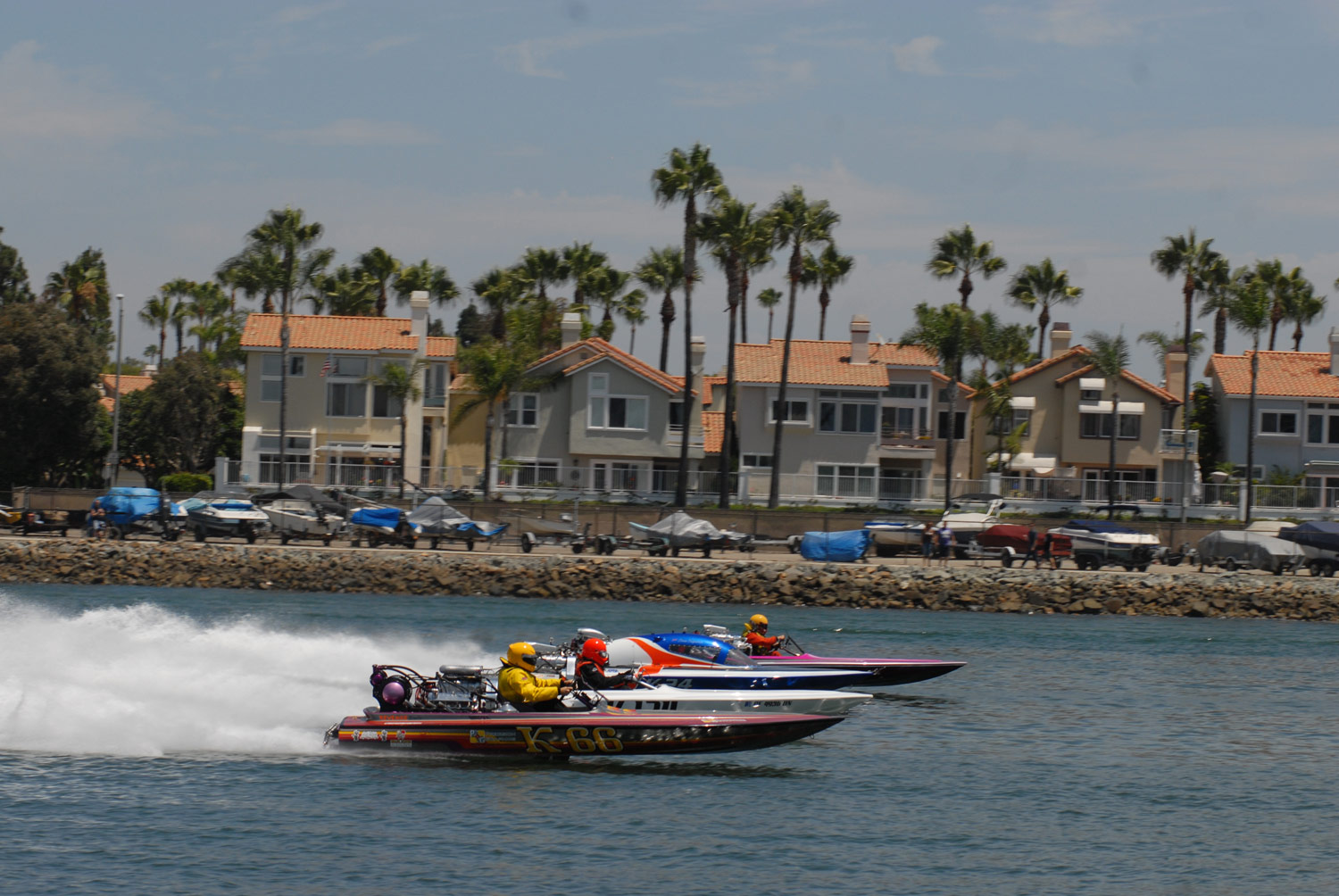