CRT: On Top of its Game at the Miami Boat Show

Cigarette Racing Team (CRT) was on top of its game maximizing its presence at the 2022 Discover Boating Miami International Boat Show – all you had to do was look up! The premiere lifestyle and performance boat maker modeled an immense corner of the newly revamped Miami Beach Convention Center into a piece of CRT heaven… even tossing a smoking-hot Ferrari Testarossa onto the red carpet for enhanced effects.

In keeping with its aggressive branding, a massive video screen elevated directly above the flagship 515, rolling footage delving out details pertaining to the new generation of Cigarette under the command of owner John Ruiz and his three children Alex, Cristina and Johnny, stopped show attendees in their tracks, leaving them with an earful and eyeful of what’s to come. Highlights also included recaps from the Art Basel live action painting of the Cafe Racer with street artist Alec Monopoly, and the Key West Offshore World Championship and Florida Powerboat Club Poker Run sponsored by CRT.

Energetic, engaging and exciting, the booth was packed with powerboat owners, offshore racers, bikini models, families and fans of the brand. The continual flow of good vibes at Cigarette was the same as the Fort Lauderdale Boat Show, only this time multiplied by 100… giving me the urge to pop in daily to see what I might be missing.

The “time is now and the sky’s the limit” ethos echoed across the bridge at the One Herald Plaza Miami Yacht Show where guests were greeted by a second Cigarette 515 hoisted high above the entrance on a Neptune Boat Lift; this twin 1550-powered offshore rocket belonged to Florida Keys Cigarette dealer Chief Engine Group.

Apart from Cigarette’s dominating presence from February 16 -20 in Miami, it was Tuesday night’s double bombshell news drop from the flagship hours before the 10 a.m. opening bell that evoked the most enthrallment – the Opa Locka-based business purchased the naval engineering, tooling and manufacturing company Vectorworks, and secondly, will acquire the high-performance catamaran hull manufacturer Doug Wright Designs in March. 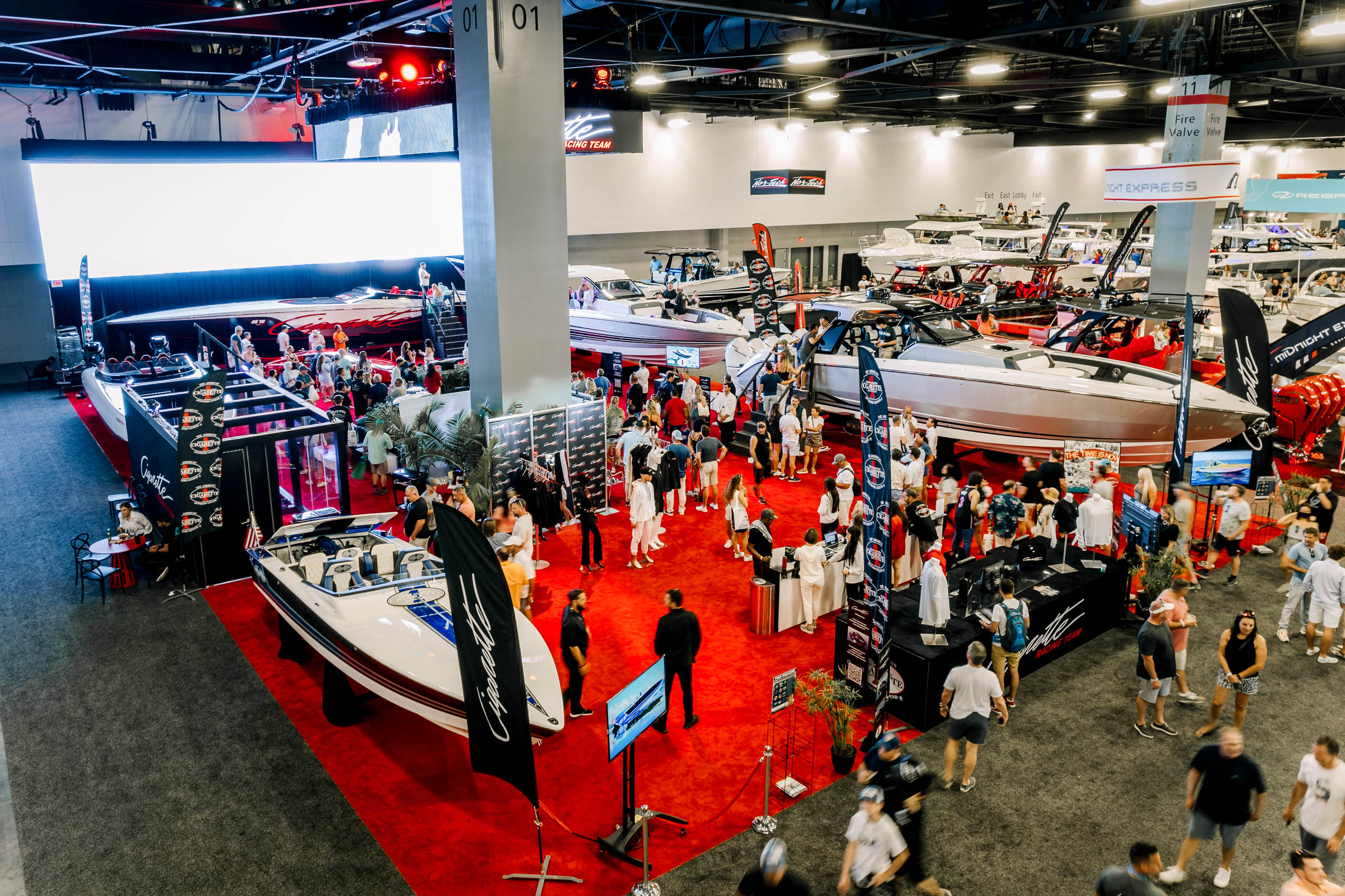 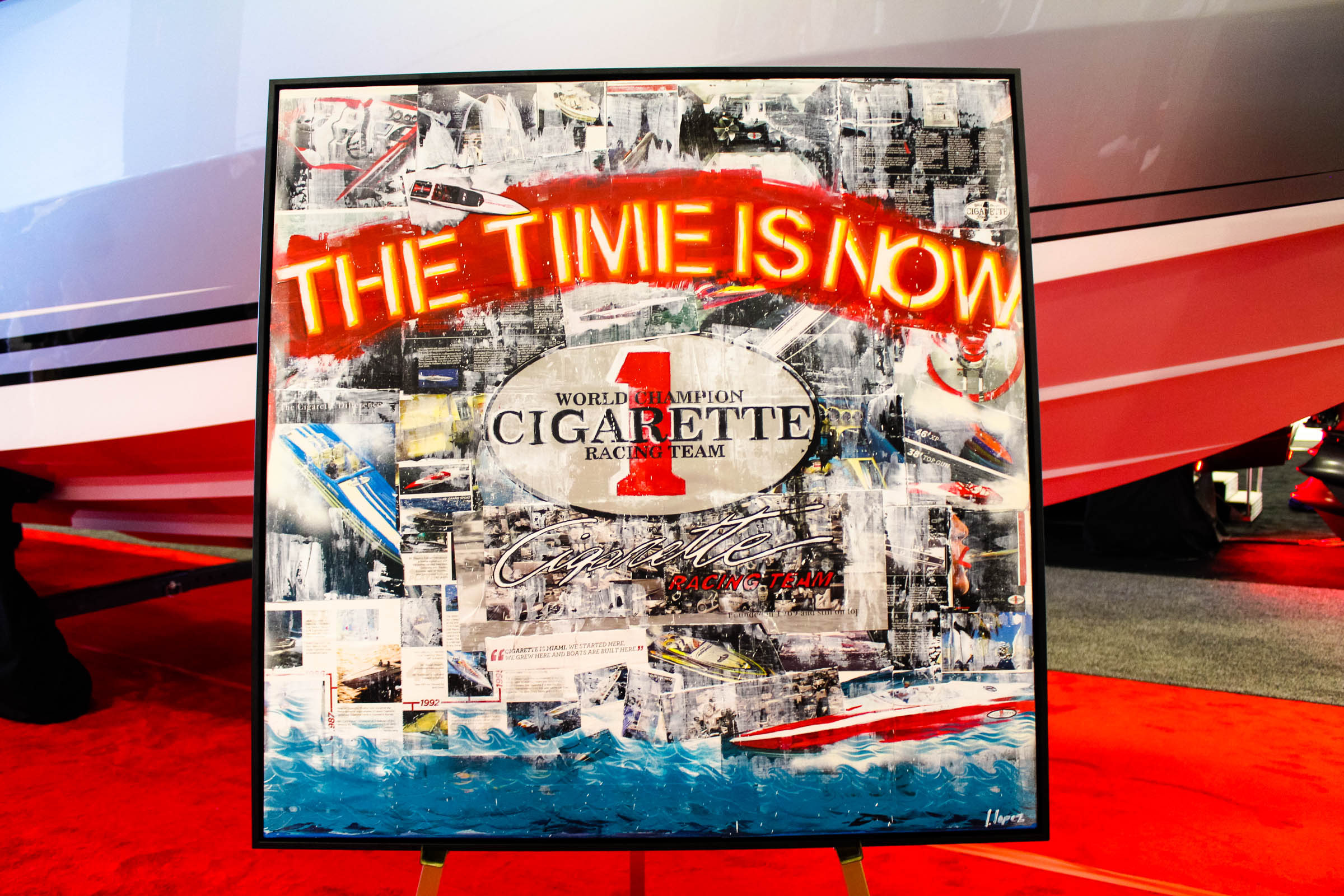 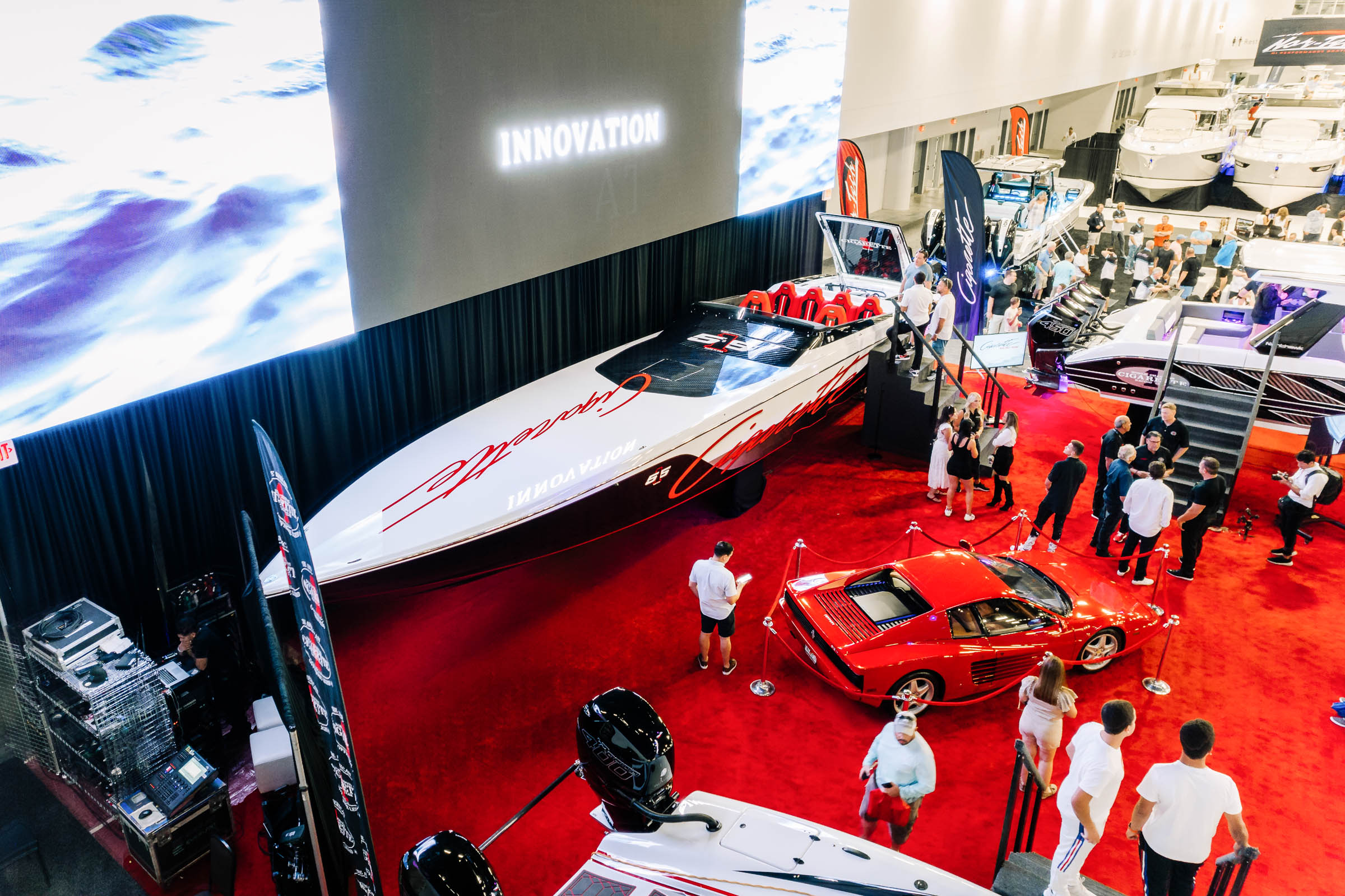 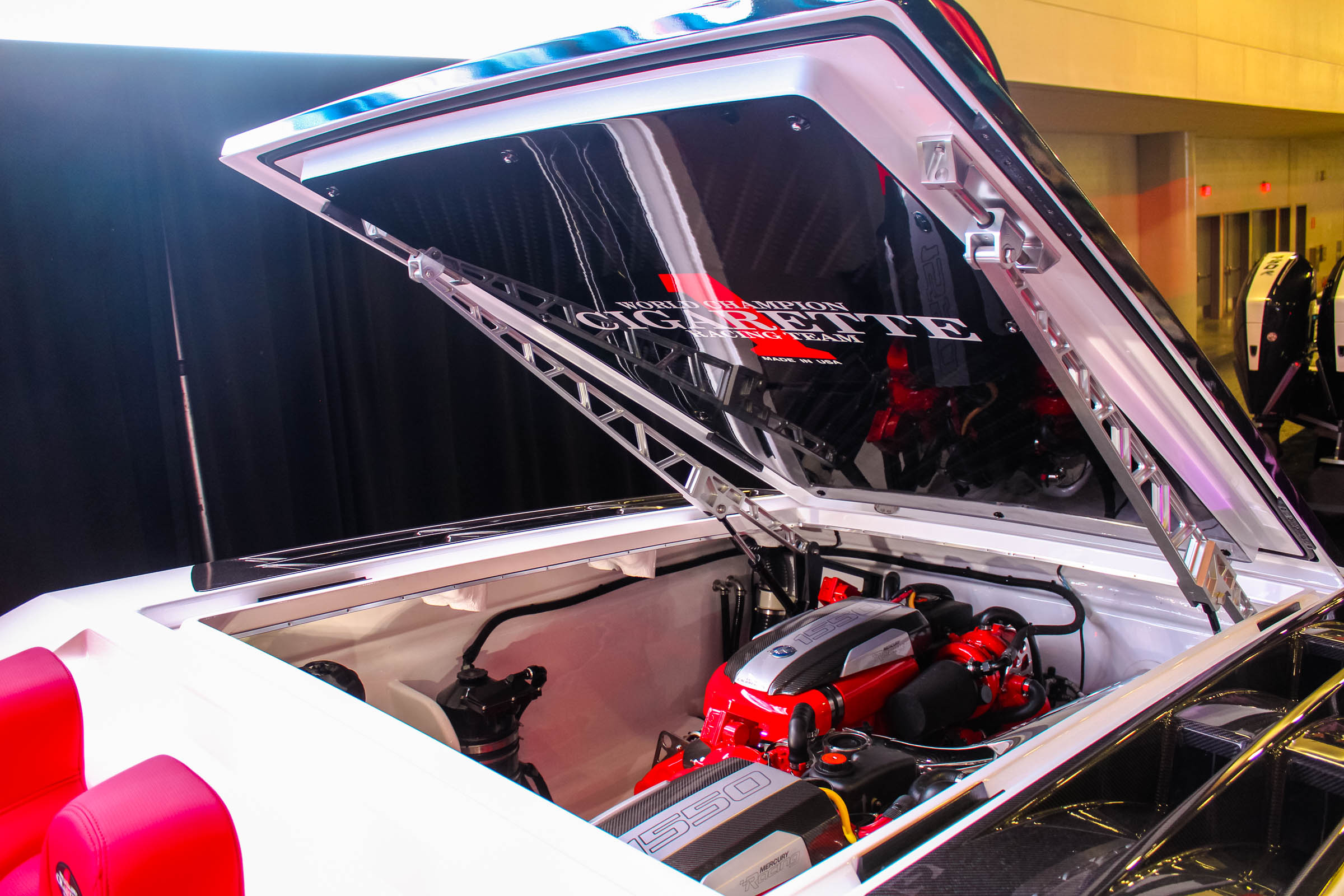 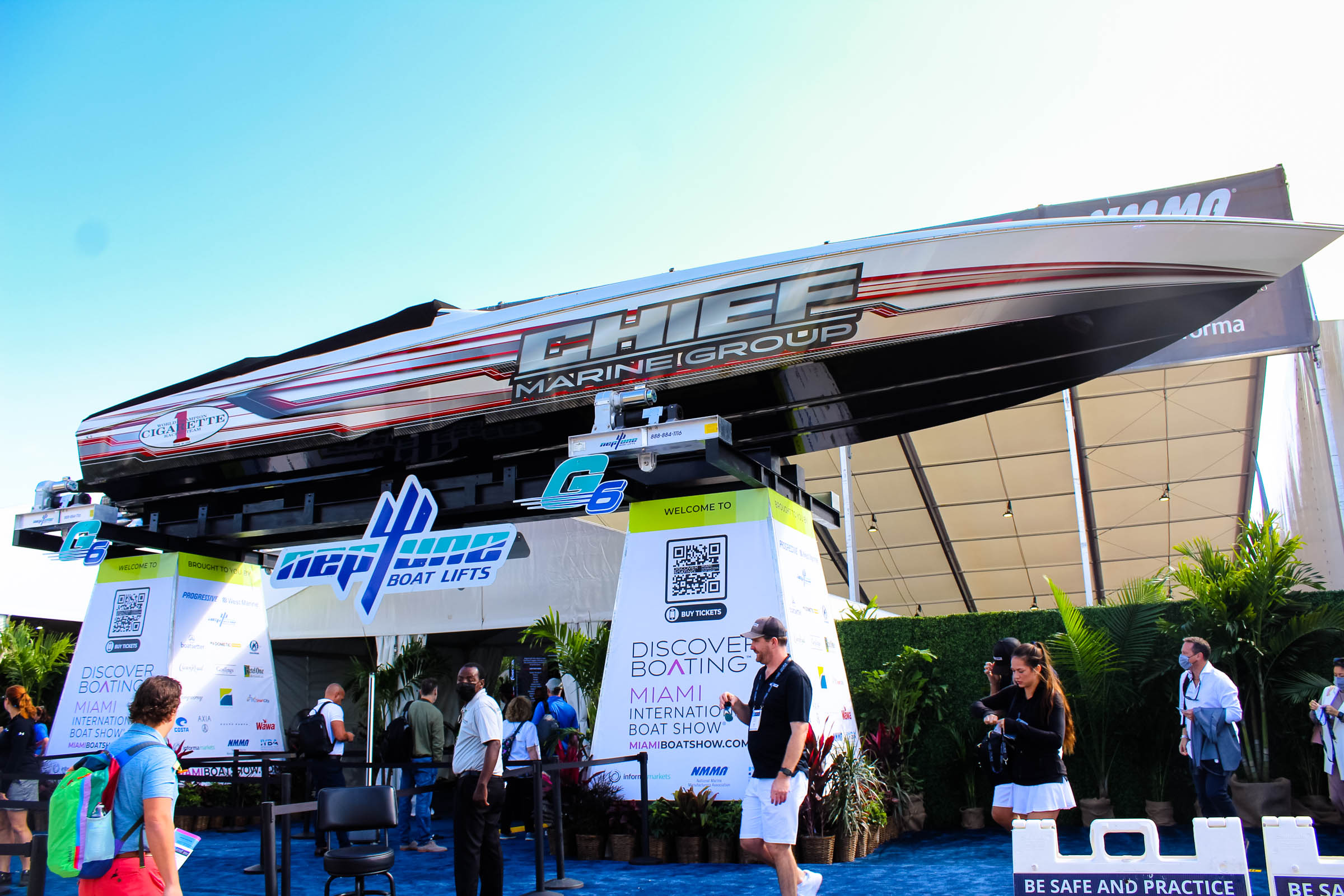 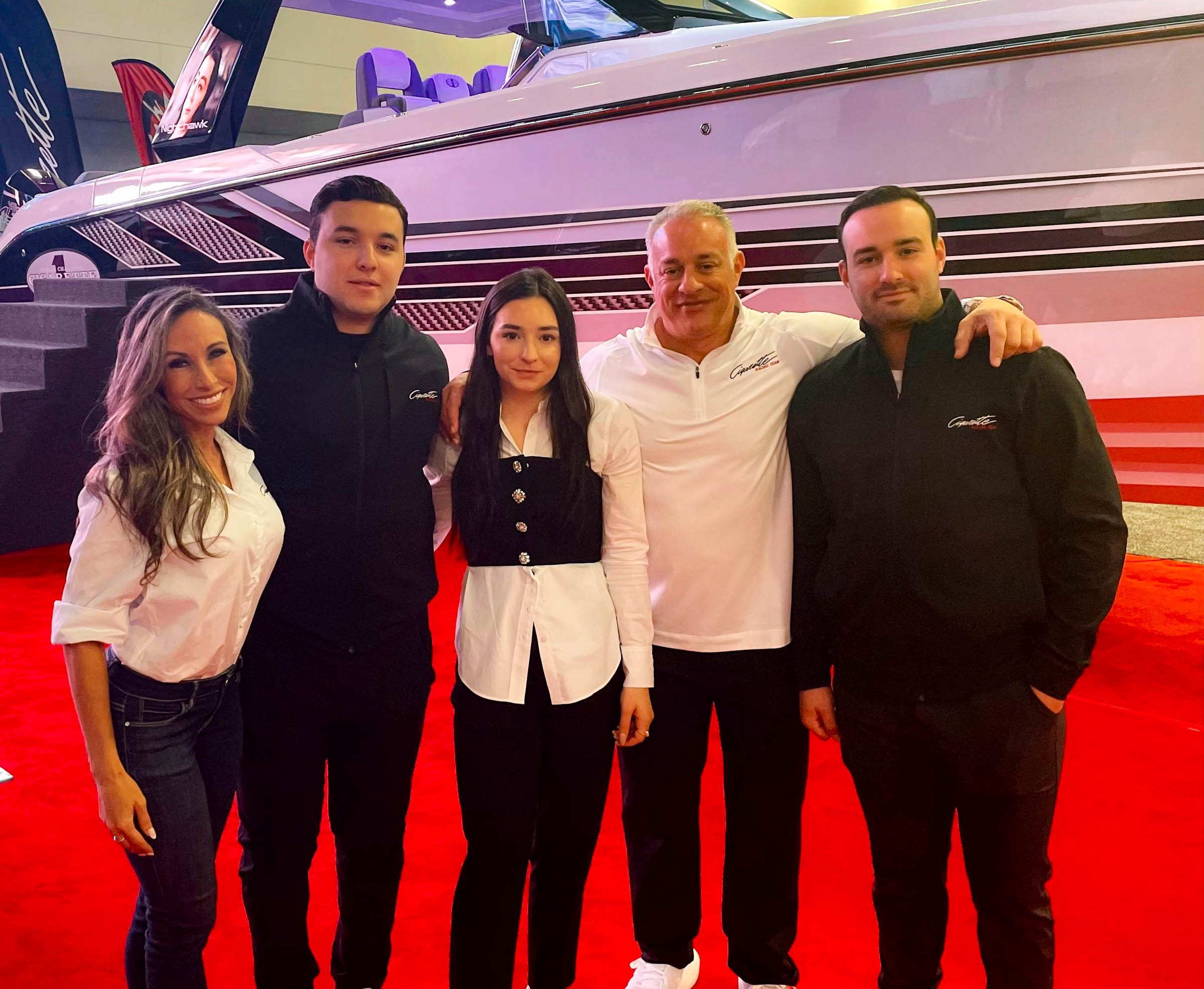 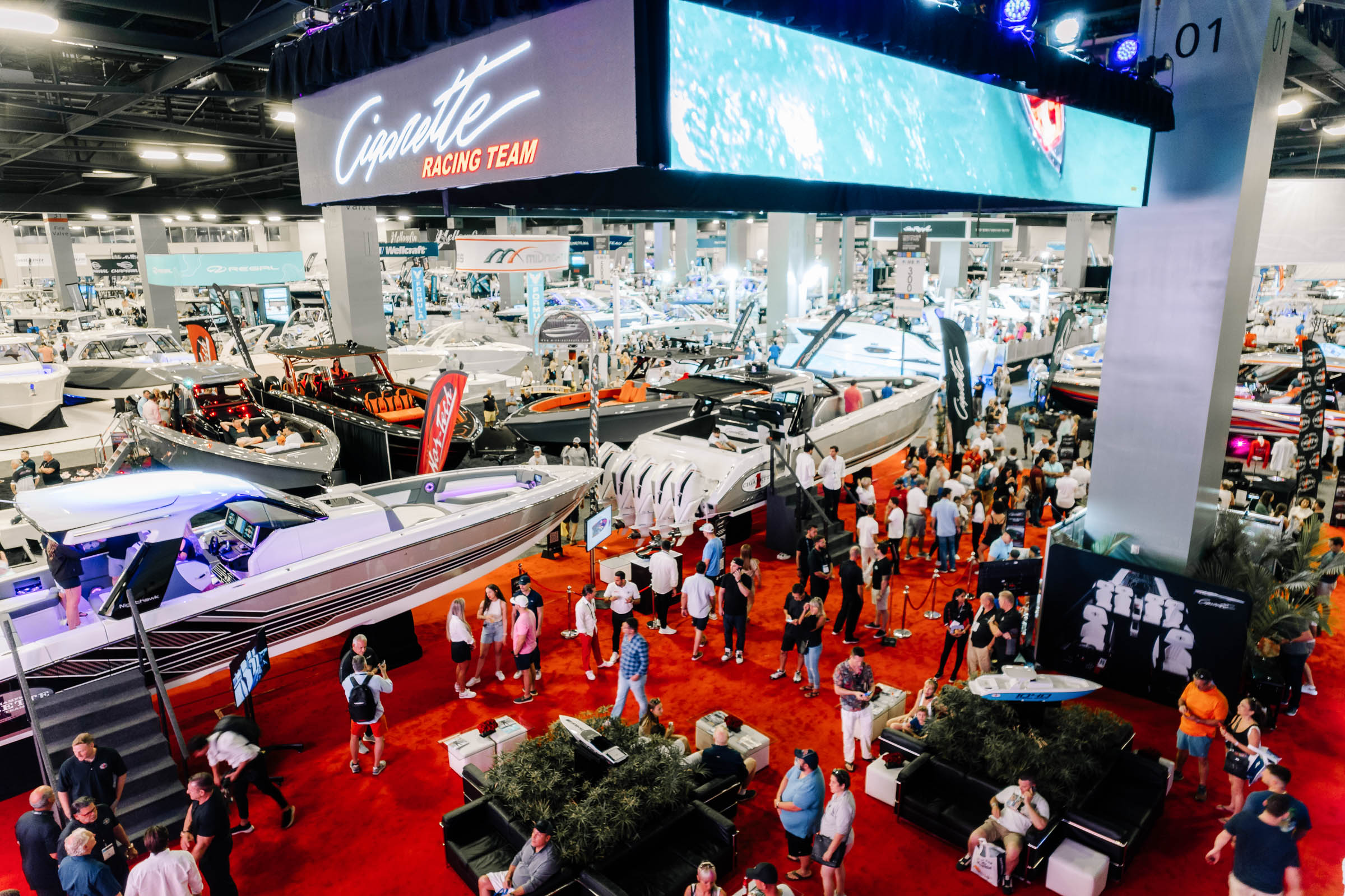 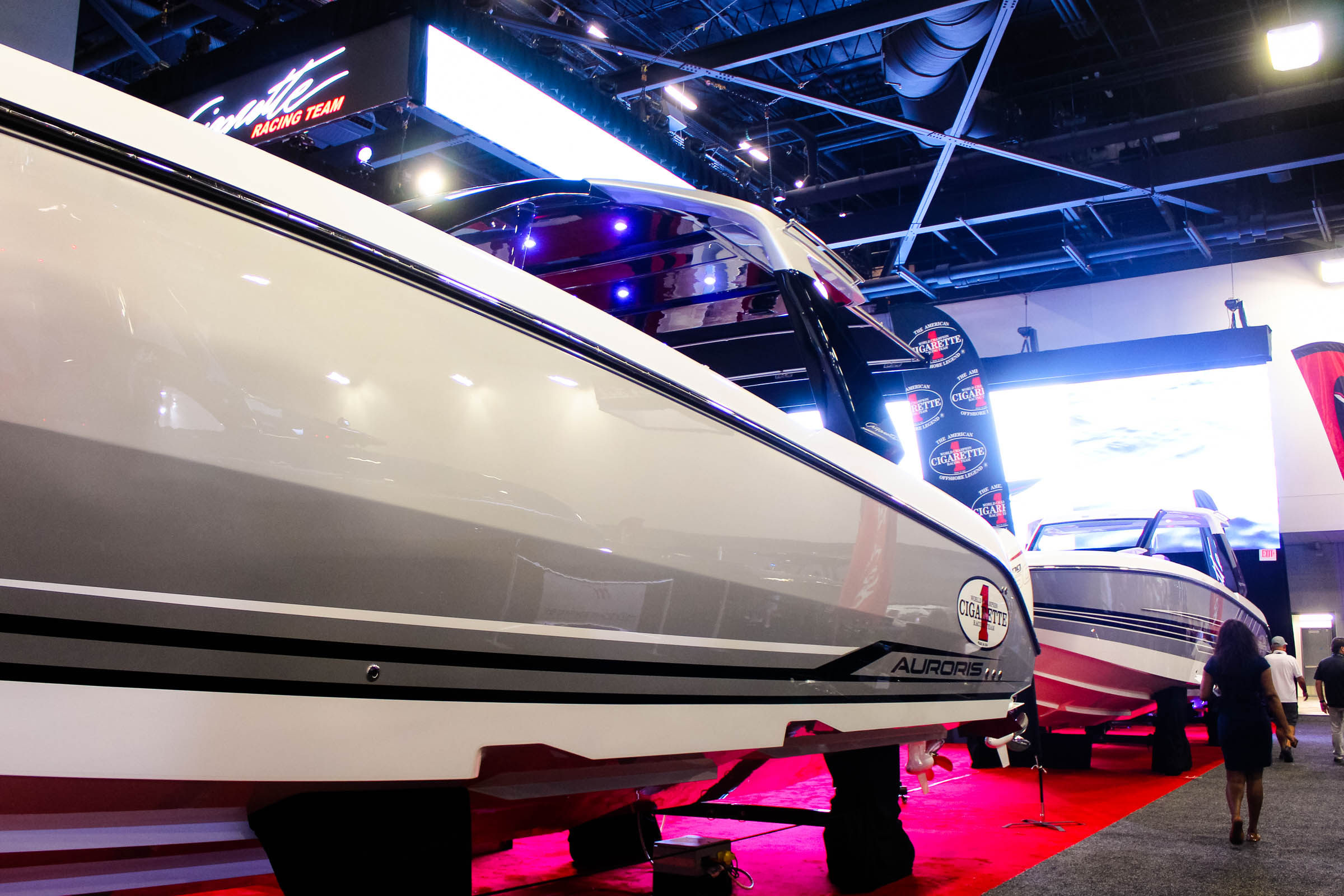 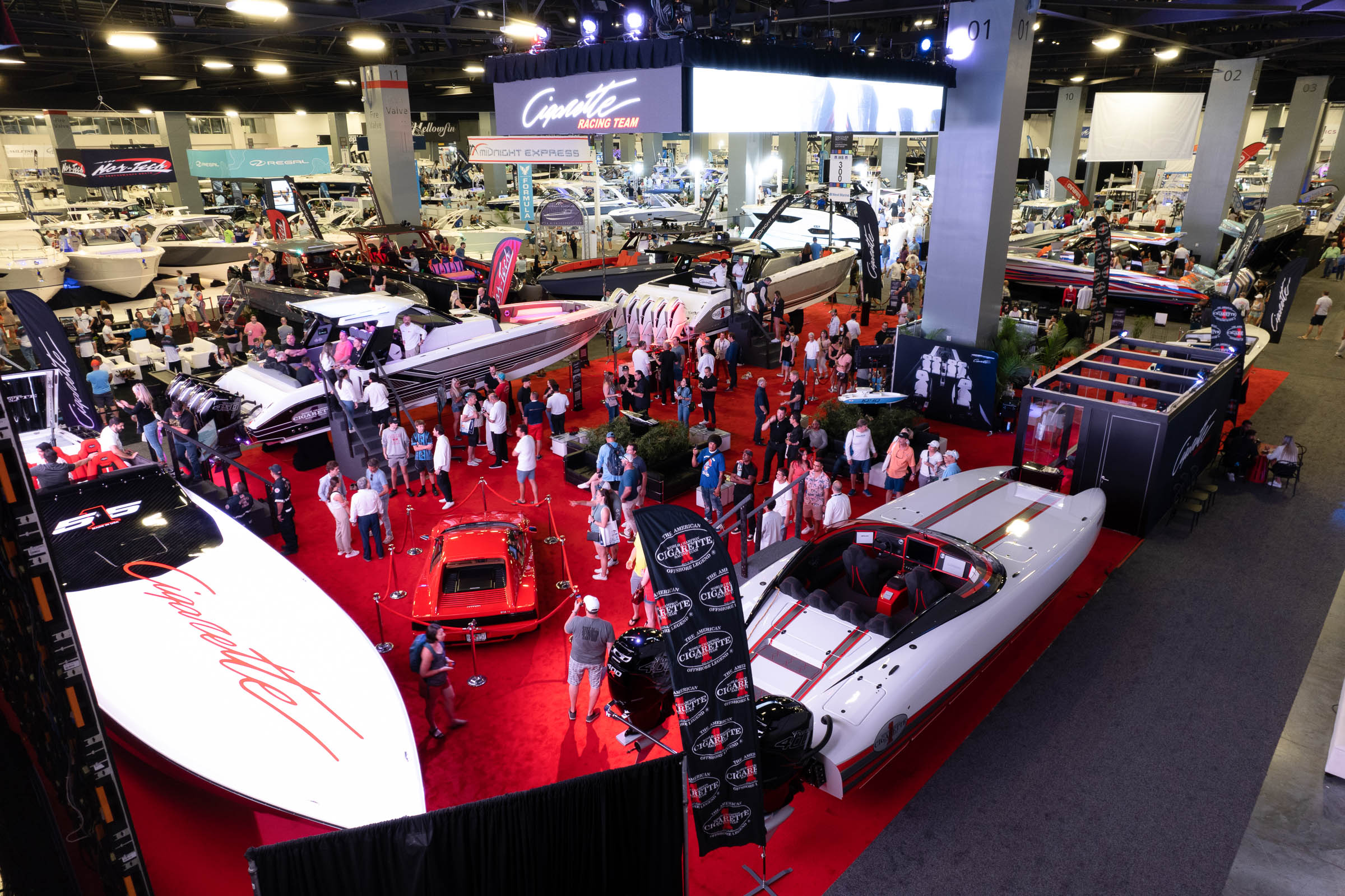 Vectorworks and Doug Wright Designs Reveals
​
Crazy for cats and crazy for Cigs, the first person I honed in on to hear about this binary bulletin of boating news was president of CRT, Erik Christiansen. “This takes us into the cat market without having to go through the development process. We will be able to innovate more rapidly to help differentiate against everyone else, and it opens the door for expanding into offshore powerboat racing,” Christiansen then added, “Doug Wright will remain on-site at the Melbourne facility; he signed a 5-year contact.”

As for Vectorworks, eventually the facility will become the Cigarette Product Development and Operations Center and new model releases with advanced design and engineering capabilities will be the focus. The end goal is to develop innovative, tech-centered products geared toward improving functionality and safety, which in the long term; Ruiz hopes to share with the industry. Jeff Gray, founder of the Titusville-based outfit will remain for at least one year. 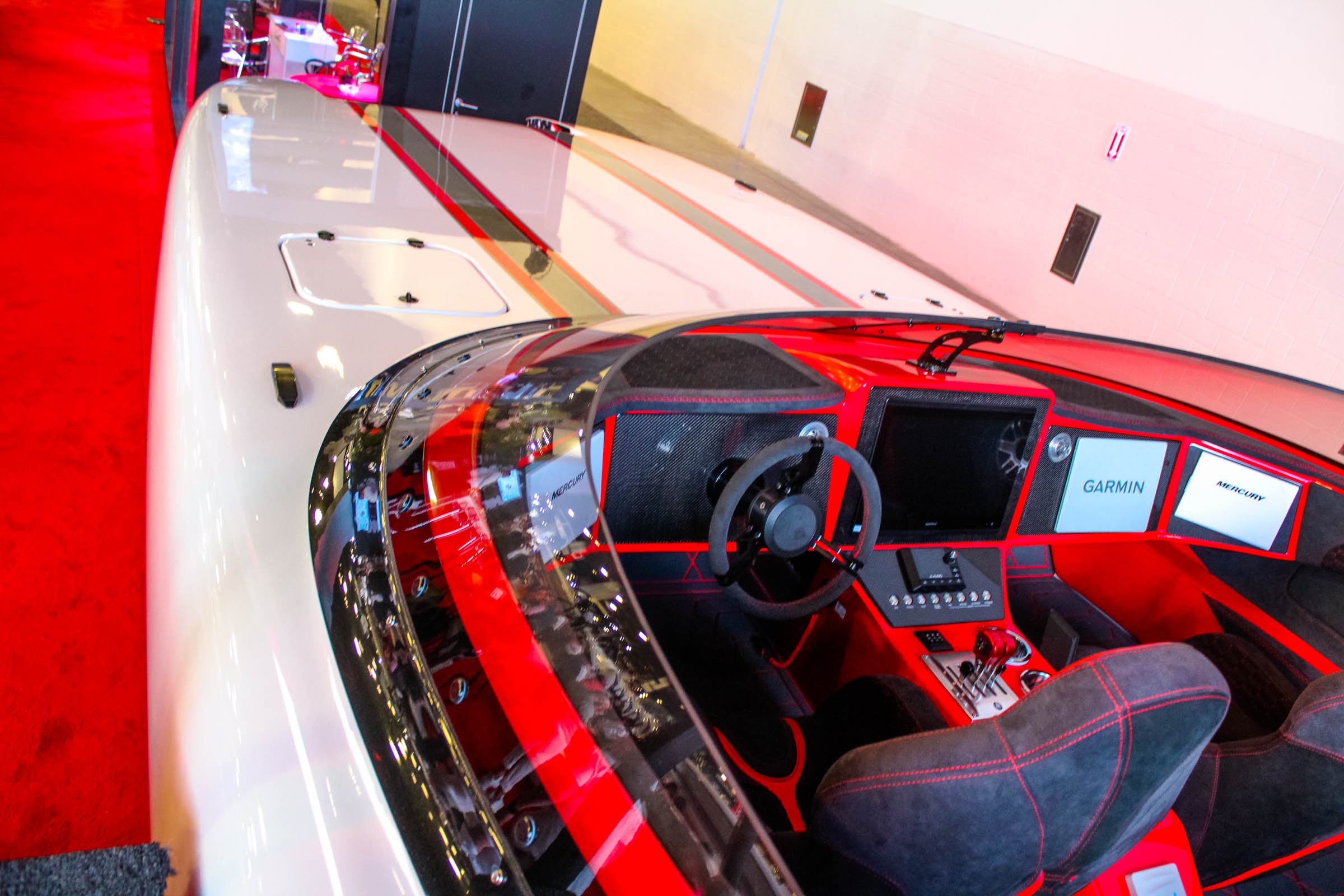 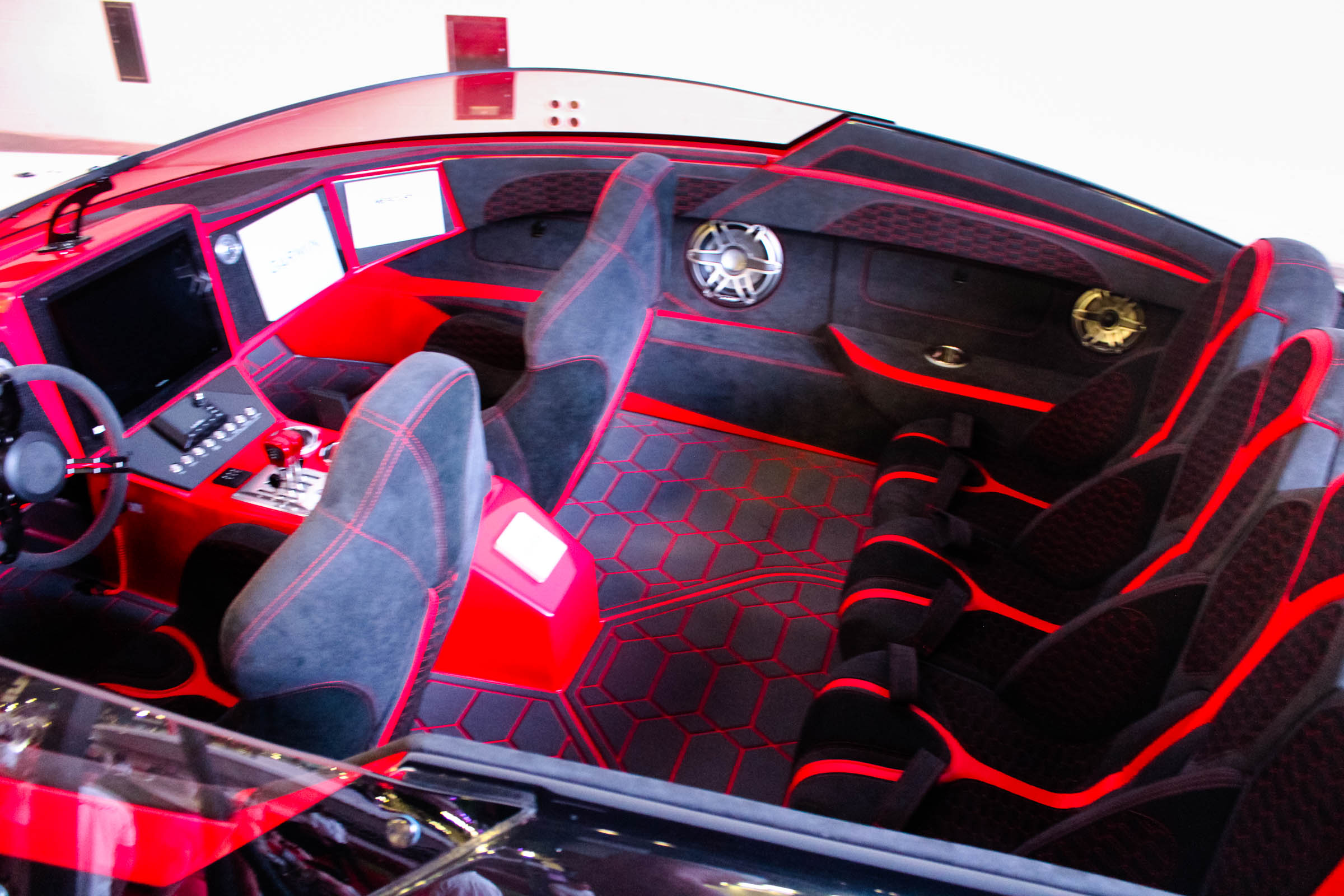 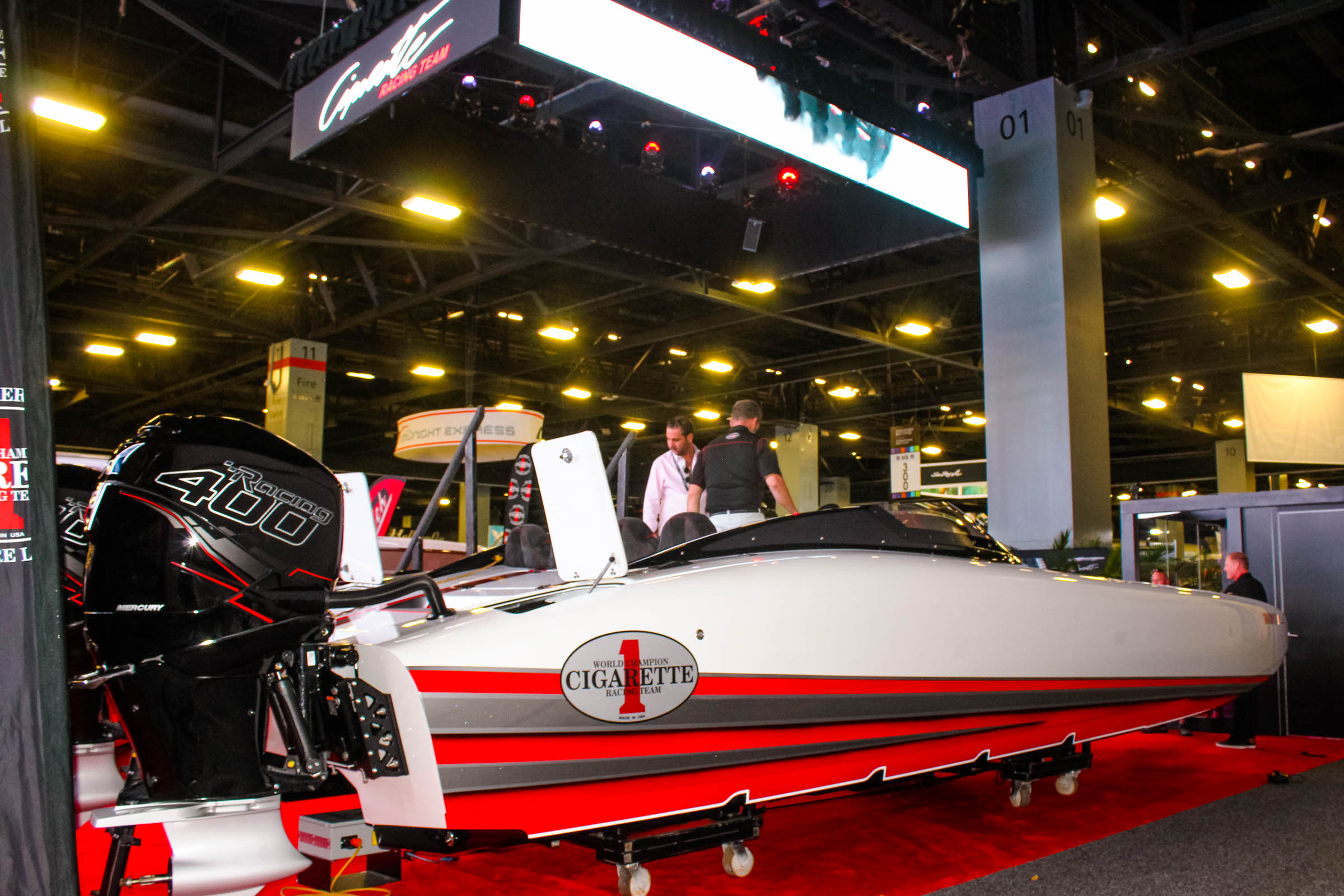 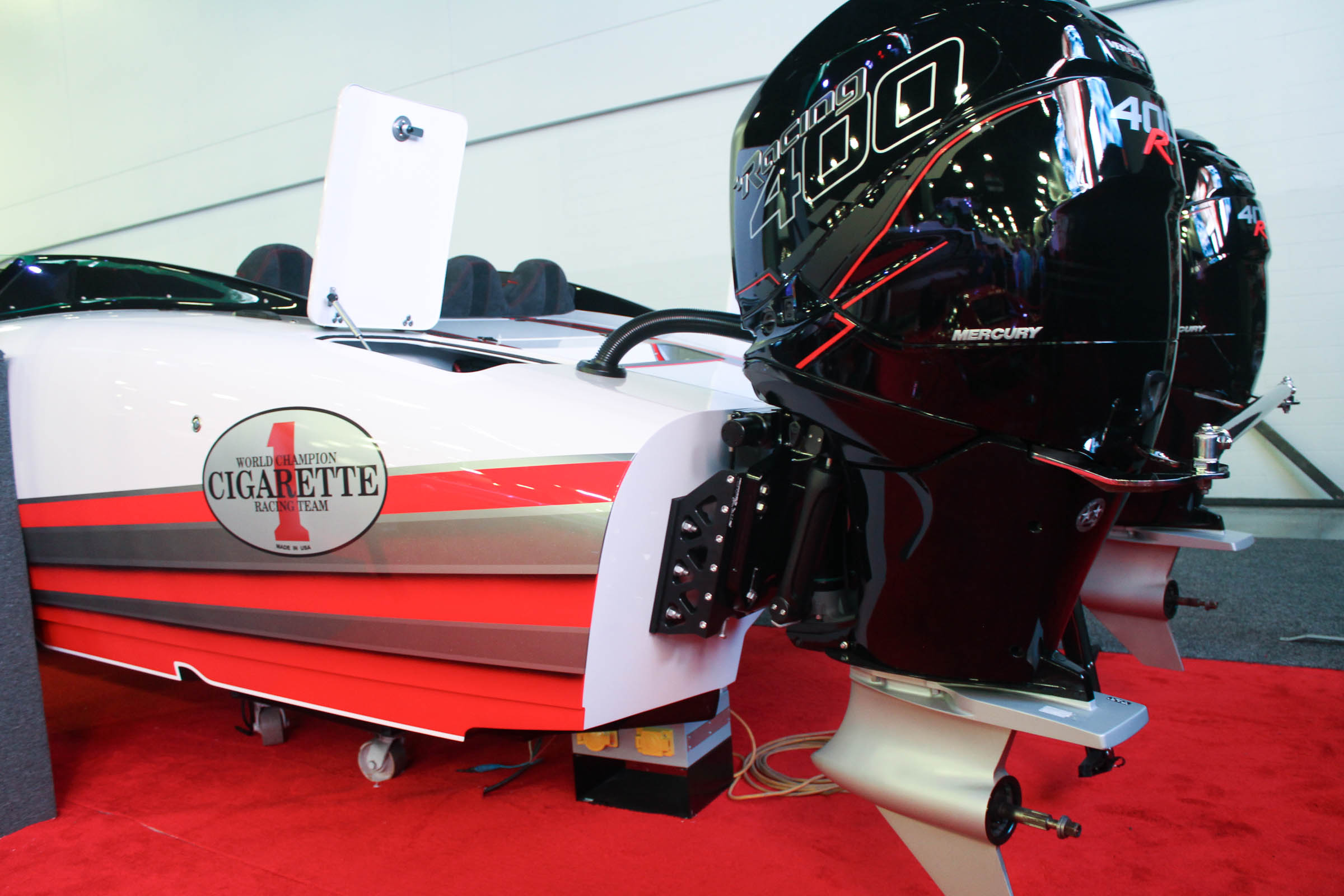 Cigarette Introduces the E-Jet and Stealth 65
​
Enigmatic teasers of Cigarette’s personal watercrafts (PWC) finally came to fruition (by way of conceptual renderings) when Diana Diaz, the charismatic CCO, revealed what’s to come – and it’s not just one model, but two!

Customers can choose between a 75-mph, forced-induction, gasoline-fueled internal combustion engine (ICE); or a 64-mph electric model. The latter, dubbed the E-Jet, when fully charged will provide a solid two hours of aquatic action and thirty minutes of running time following a two-minute charge.

Multiple $2,500 deposits totaling over a million Benjamins were collected over the weekend, guaranteeing buyers first dibs at hopping on a Cigarette-branded PWC created through collaborations with Alberto Mancini Yacht Design and NGI. Projected to be walloping over waves by the end of 2023, the models are priced between $37,000 to $39,500 dollars.

For those in need of a place to house your new Cigarette PWC, perhaps the tender garage of the upcoming Stealth 65 cruiser will do? Preliminary plans indicate that belowdecks the sleek Stealth will be equipped with two to three cabins and a dinette. Above deck, the inspiration or motivation for clean lines calls for outboards to be concealed under the hatch.

The topic of clean lines entered the equation again over the five-day affair, this time during center console discussions, in which, CRT touched up future plans to Europeanize the line-up giving it a sportier semblance. 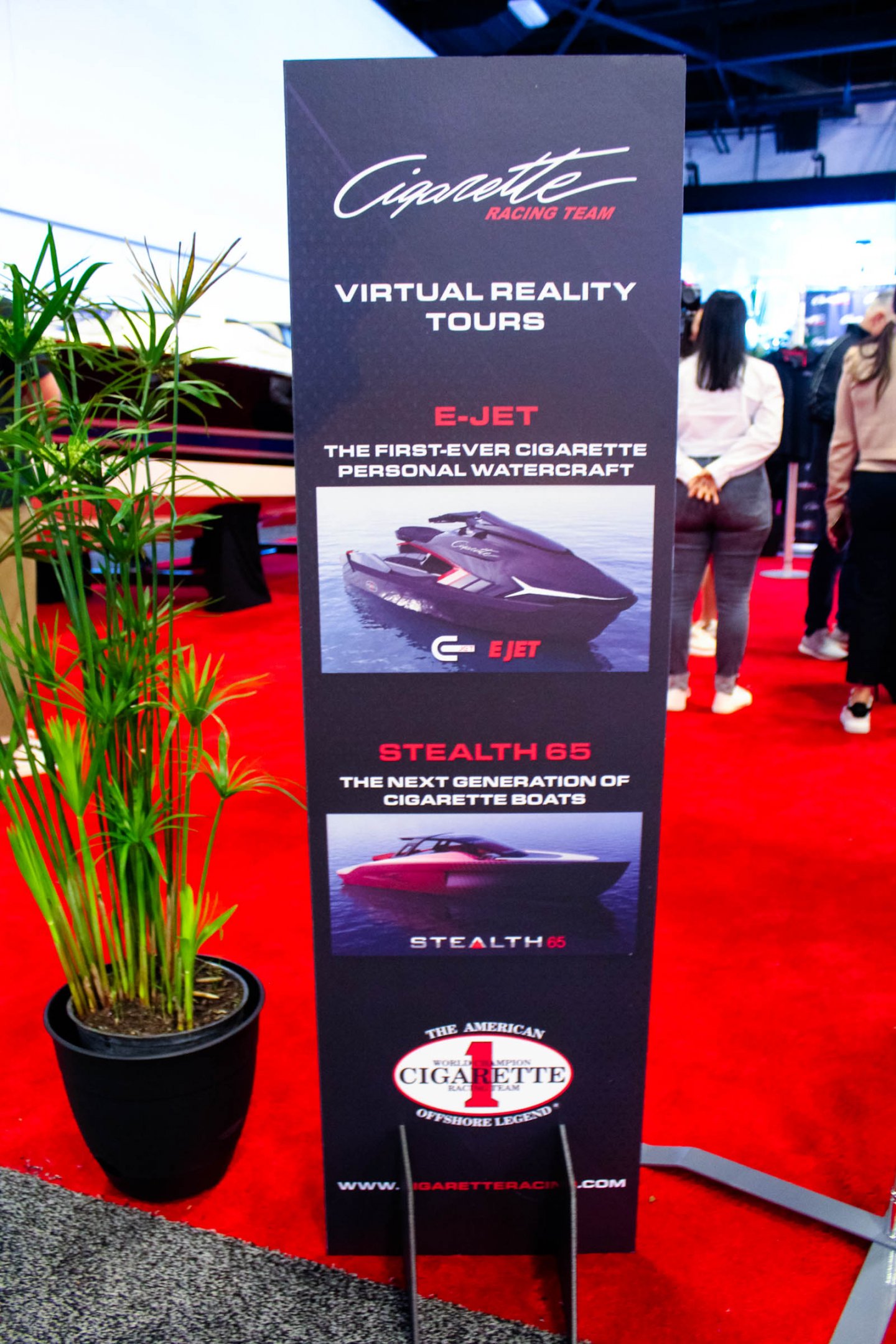 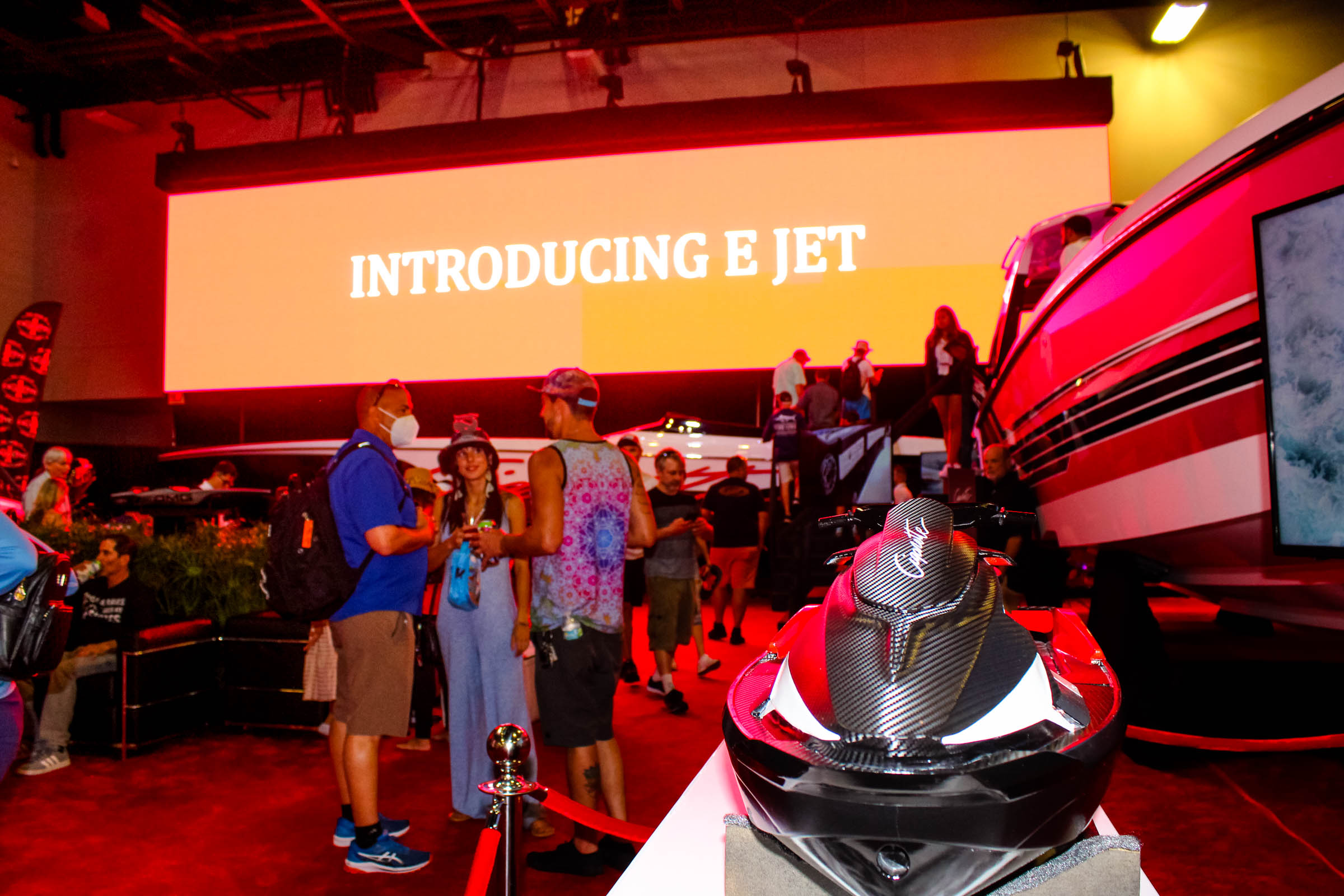 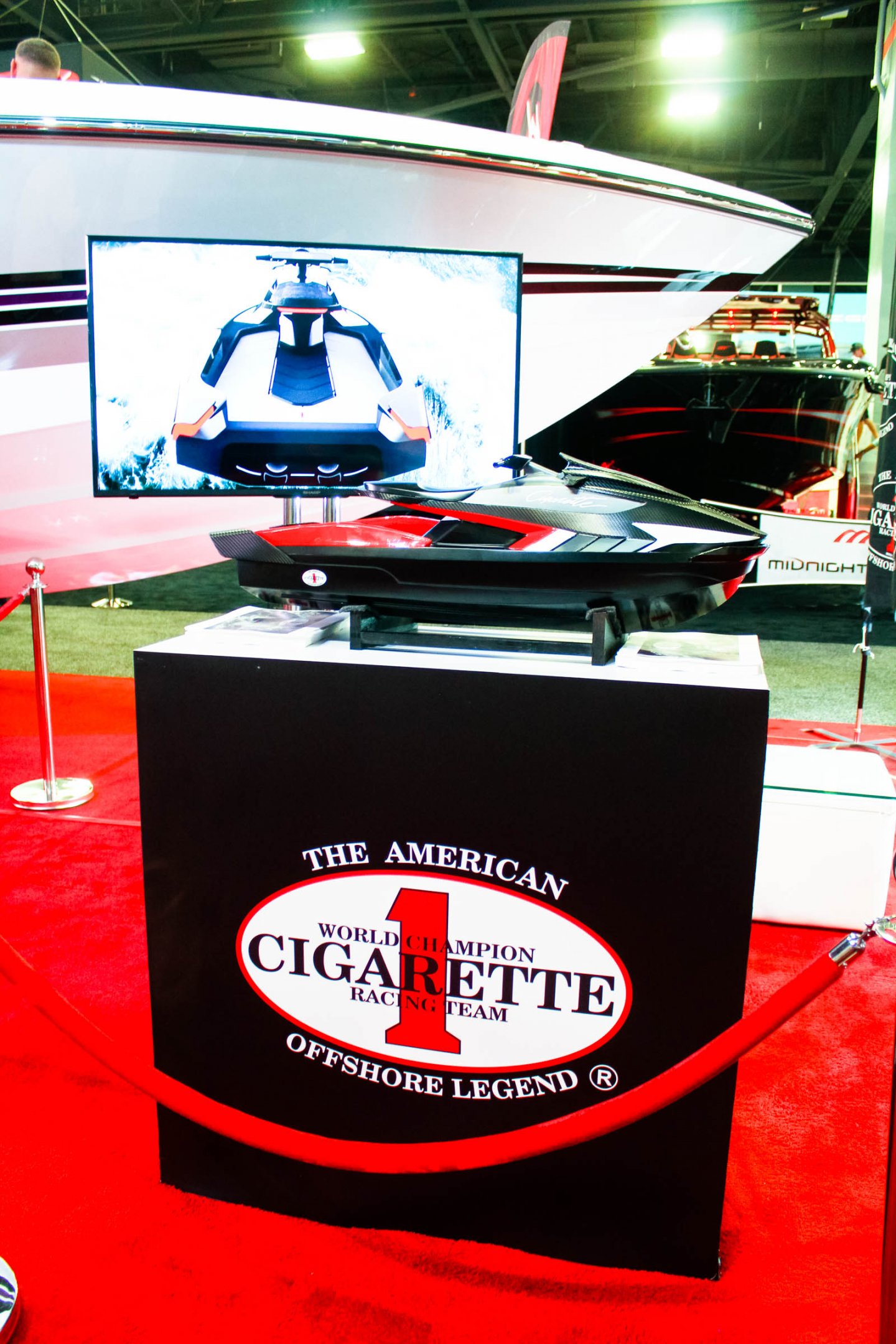 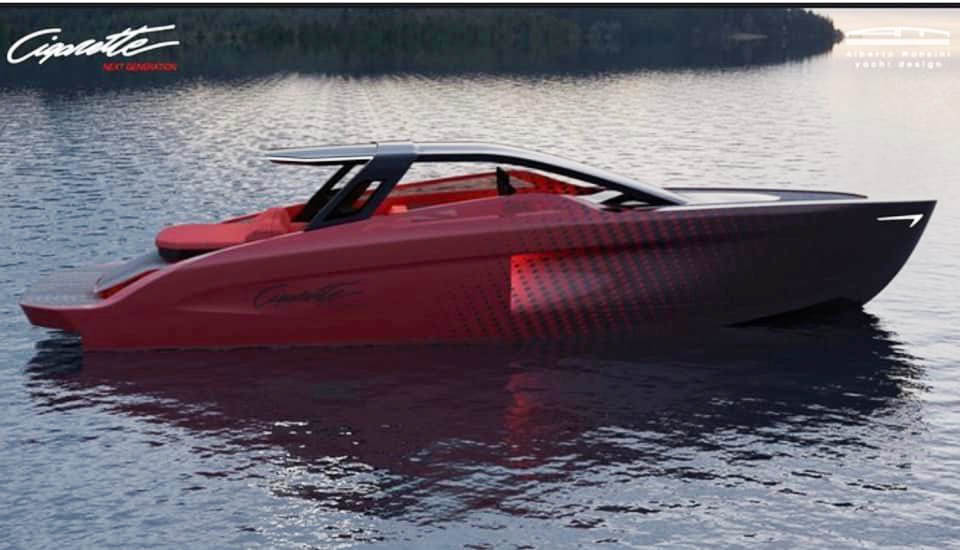 1984 Cigarette – A Peek at the Past​
While the performance boating community awaits Cigarette Racing Team’s new concepts and patent pending products to be created, what was ready to go for the Miami Show was the new apparel line of legendary oval logo gear and garments on display at the entrance and inside the booth.

And for the horsepower fanatics not concerned with hats and hoodies, steps away from the clothing counter was the classic blue and gray 1984 model Cigarette 24’ restored by Phil Lipschutz of Lip-Ship Performance. The old school 80-mph, Mercury 600 S.C.I. powered retro mod generated just as much to-do among the crowd as did the modern marine marvels; I personally was stuck to it like glue! 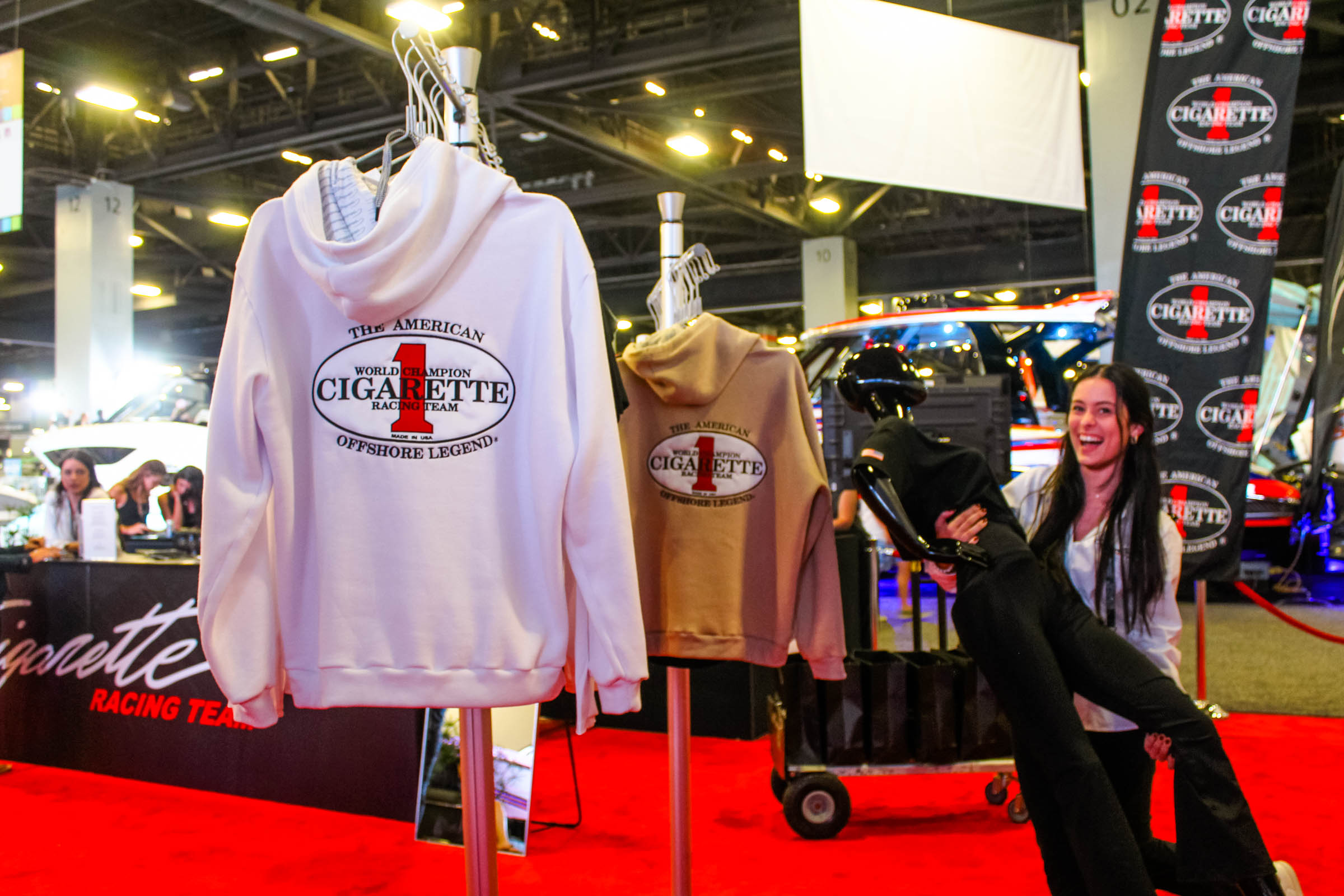 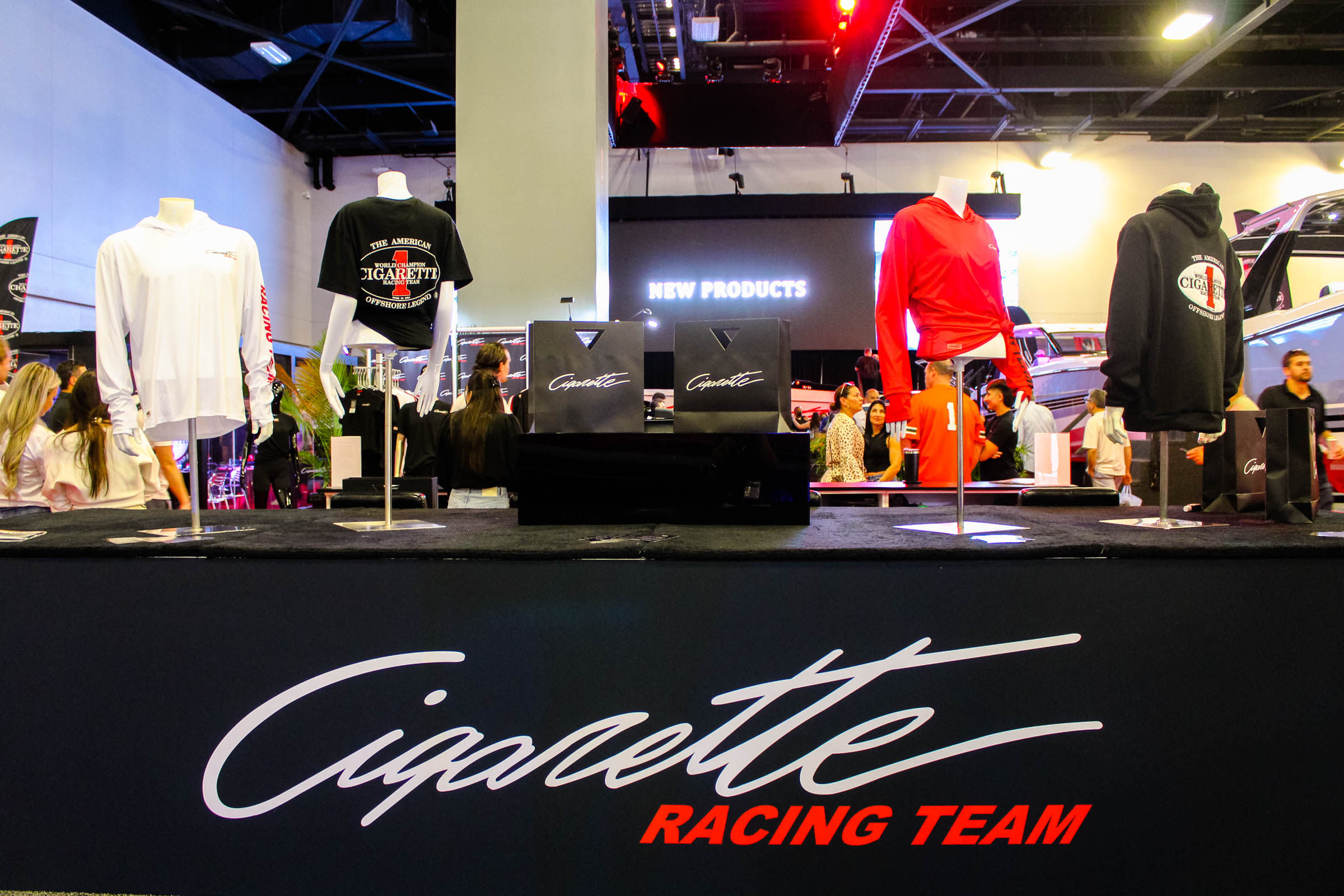 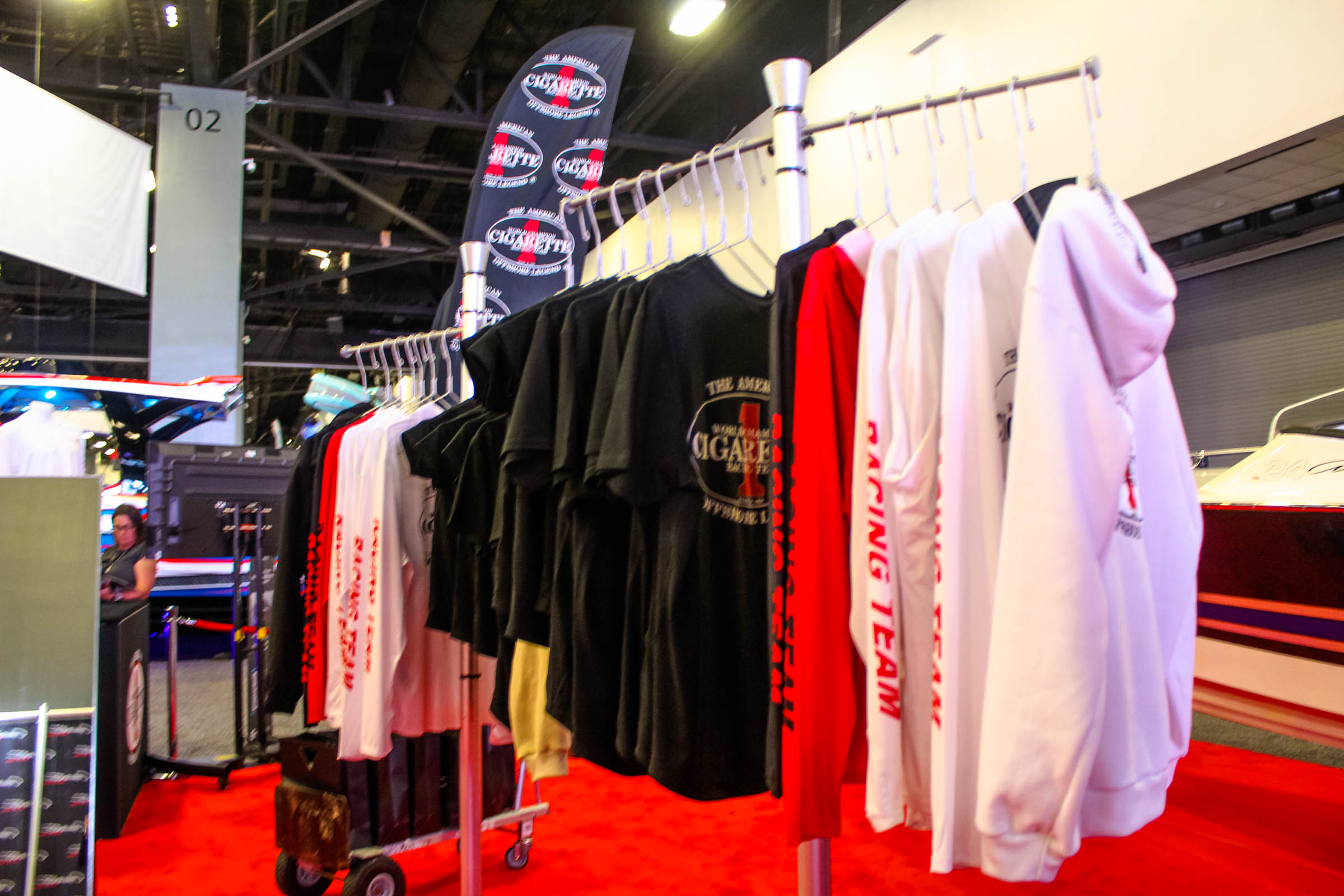 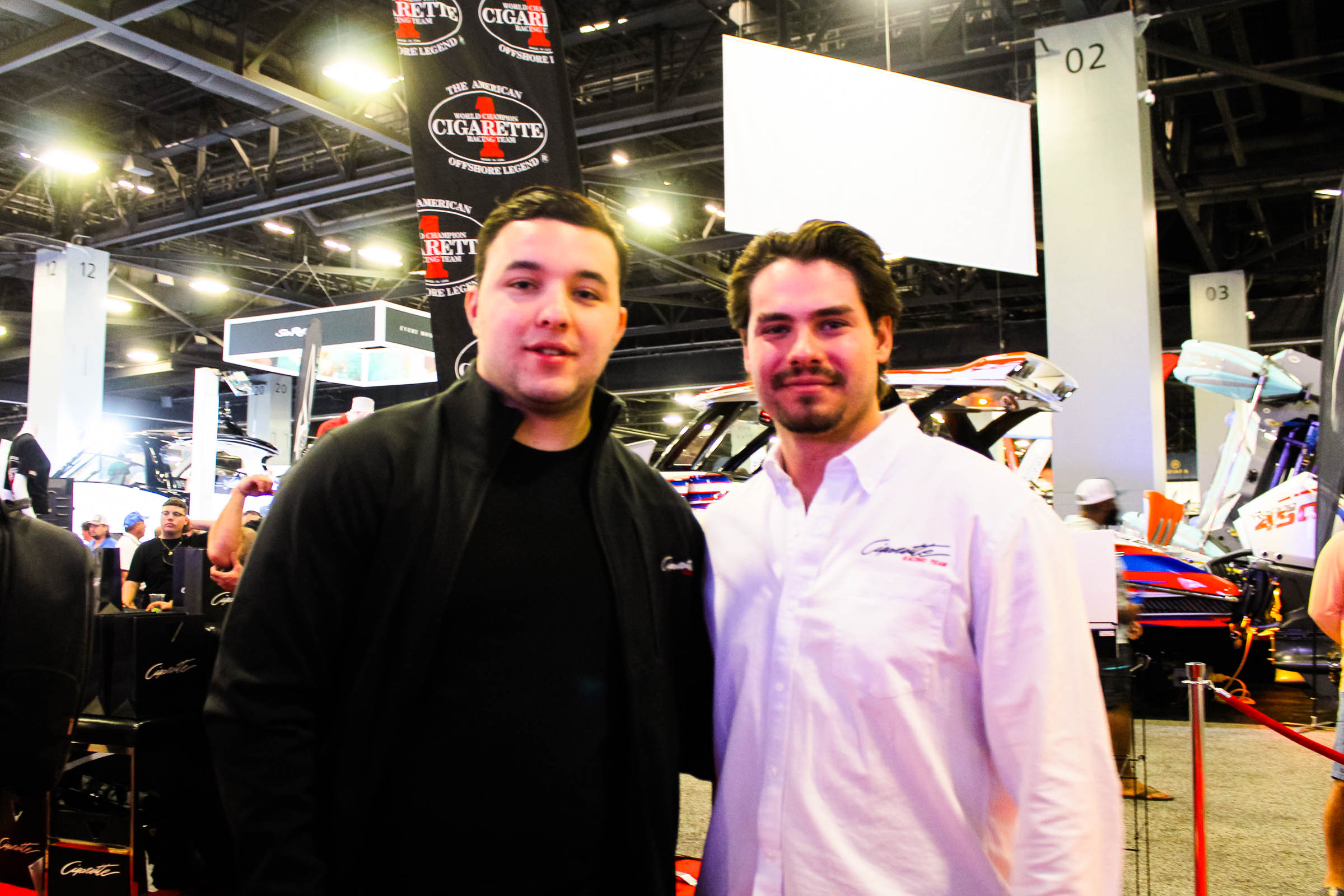 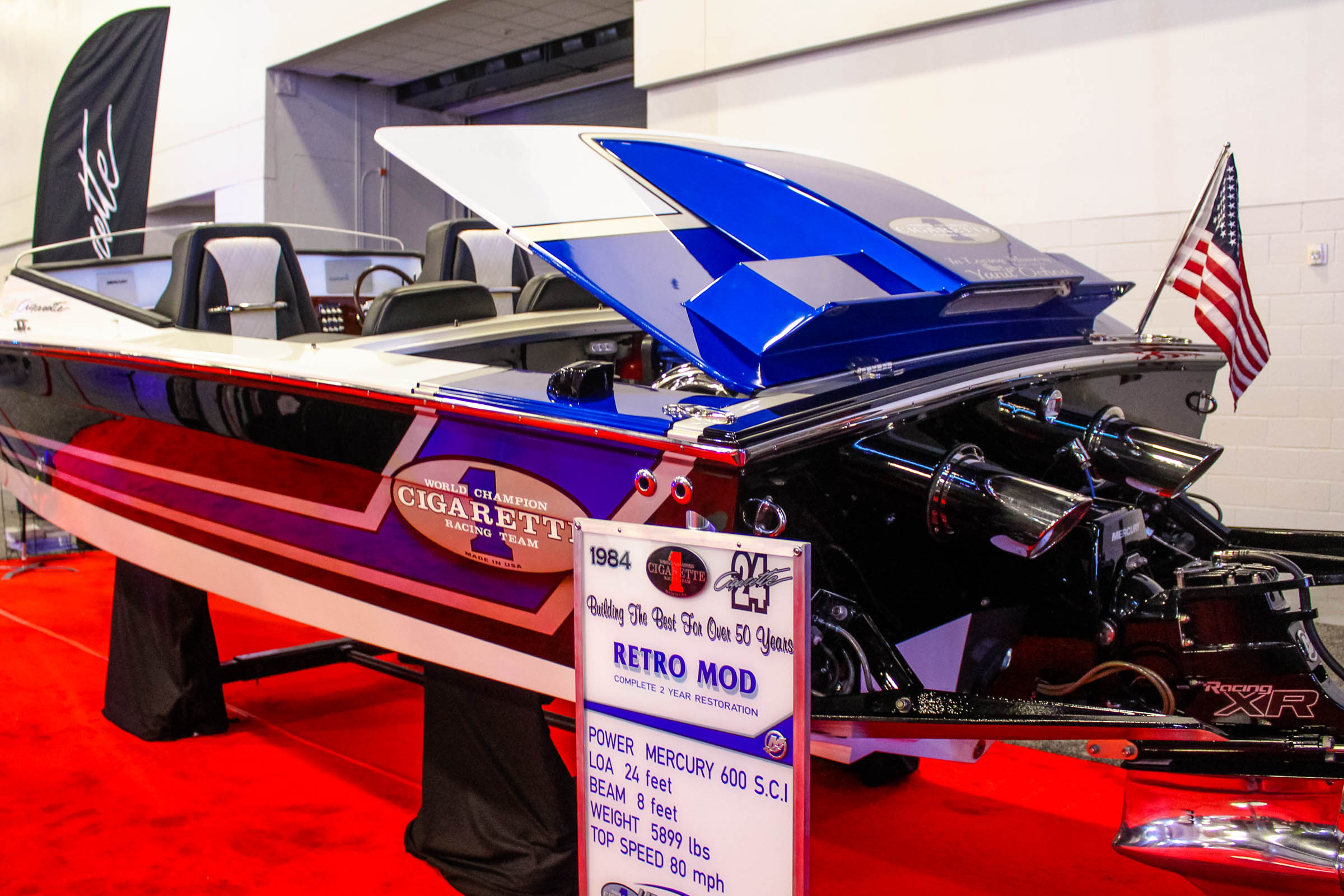 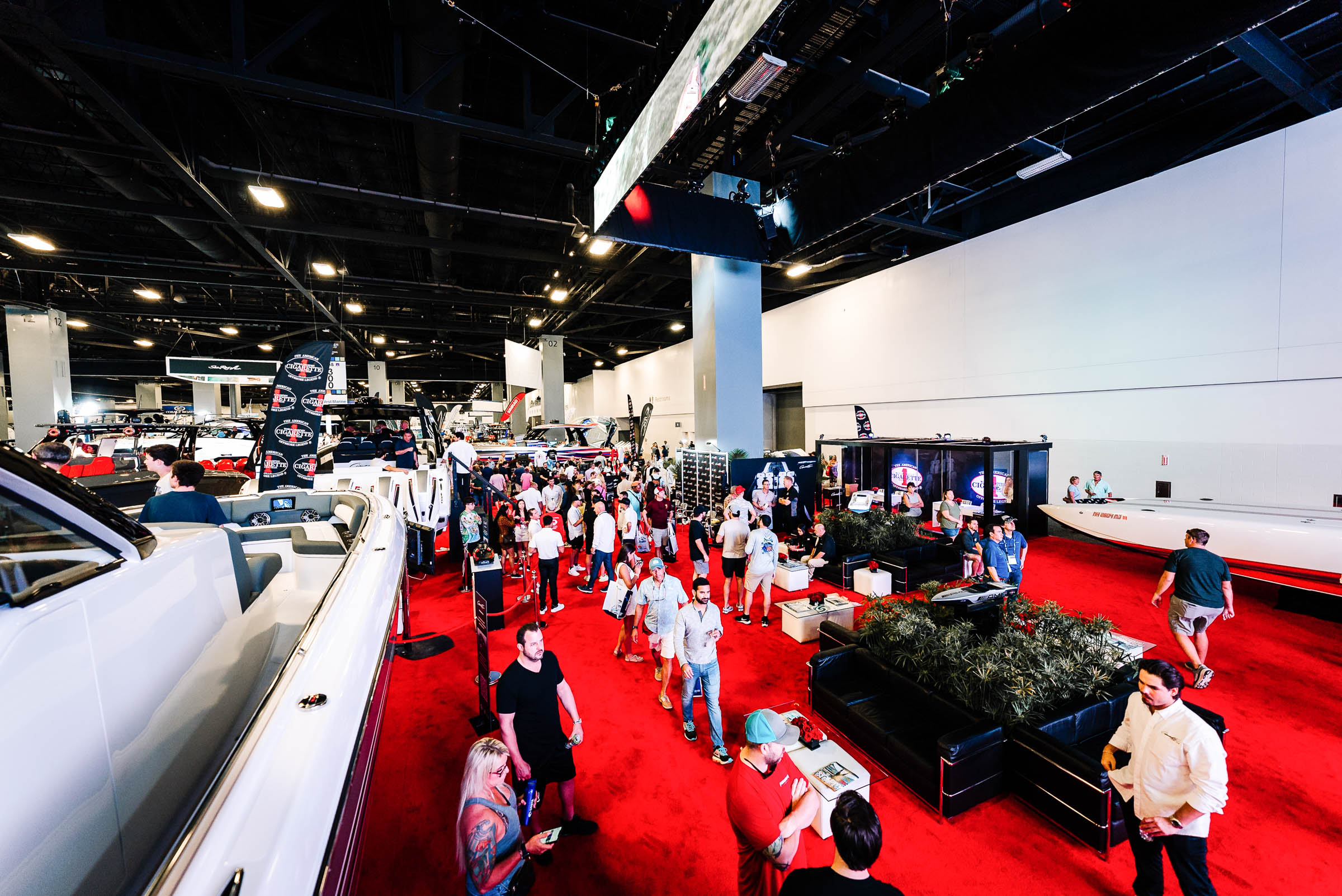 Next up – the 2022 Black Thunder 43’ siblings and the DCB M37 Widebody debut, aka Mad Props Miami splashing!
Reactions: HB2LHC