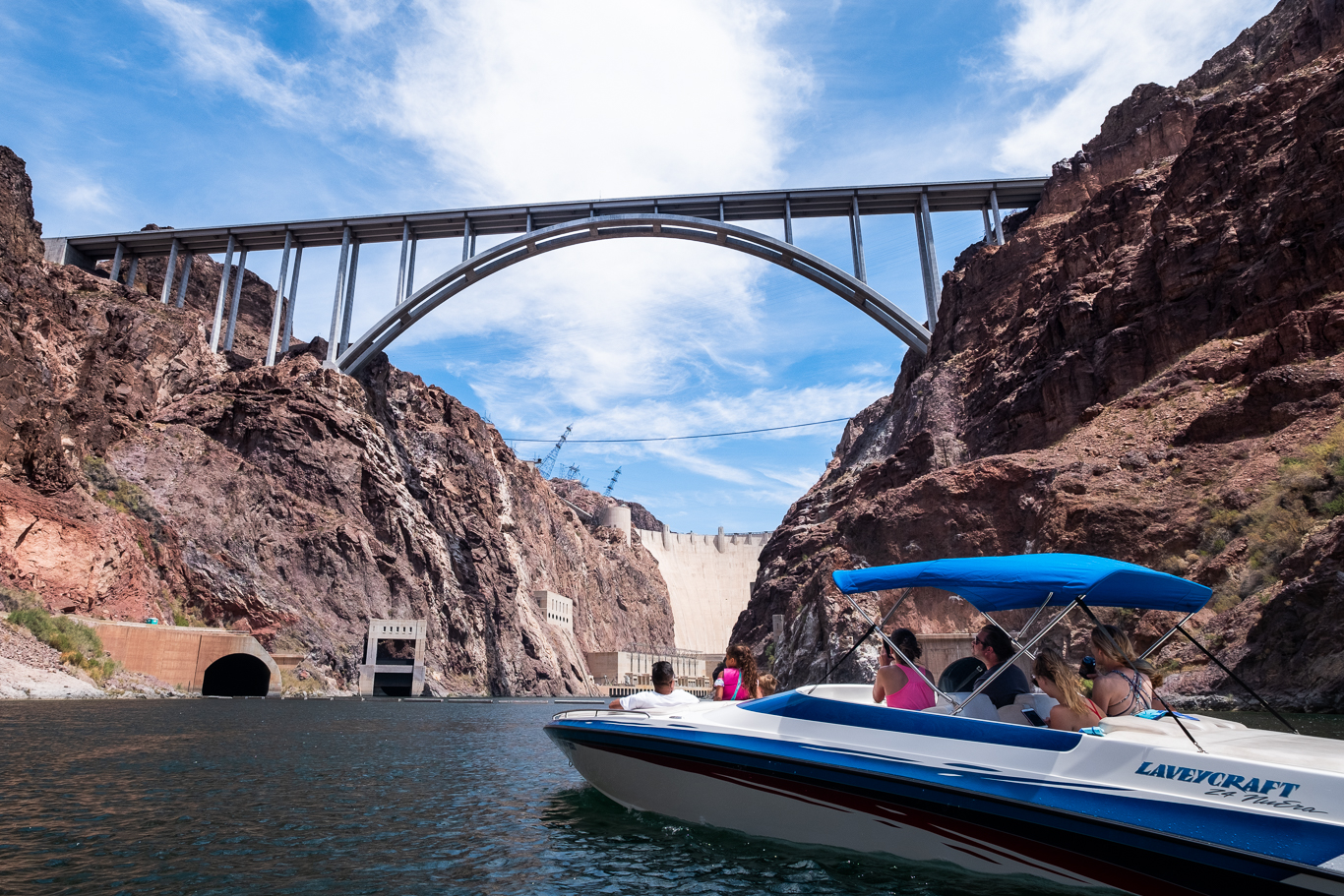 Last week, Dave called to tell me he had an event that would be perfect for me to attend. I have yet to be sent on a trip that hasn’t left me stoked, saying “Can’t wait to do this next year!”, so I happily accepted. That’s when I learned about the Damn Dam Run. For those that haven’t heard about this run, it starts just north of Davis Dam, runs through Lake Mohave, all the way up to the Hoover Dam, some 50 miles up the Colorado River.

Friday night, I hopped in Dave’s limo with him and his family and we headed north up to Bullhead City for a BBQ and pool time at Rob’s house. On the menu was pulled pork sandwiches and some shaved ice (I highly recommend the orange 50/50 bar flavor!). 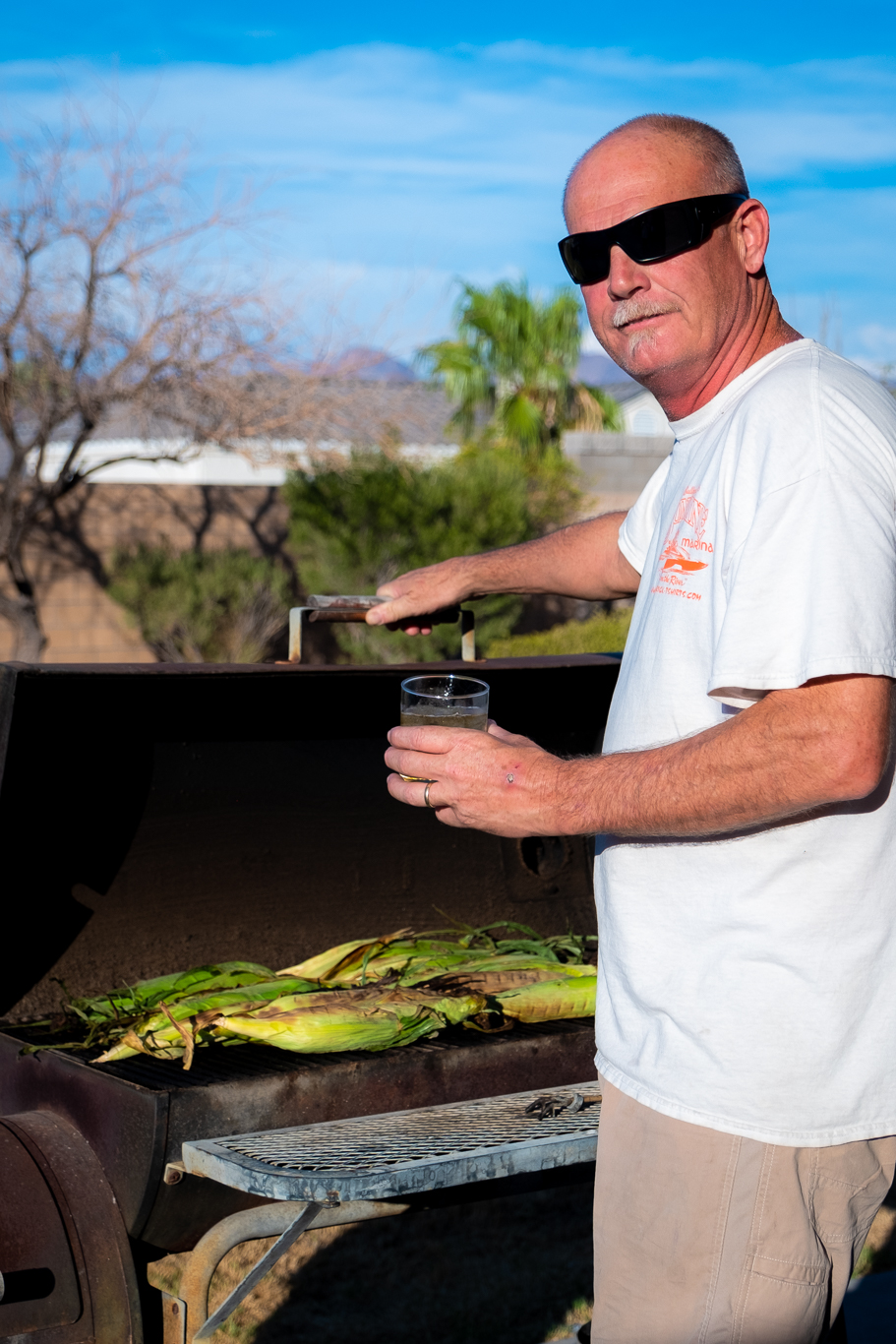 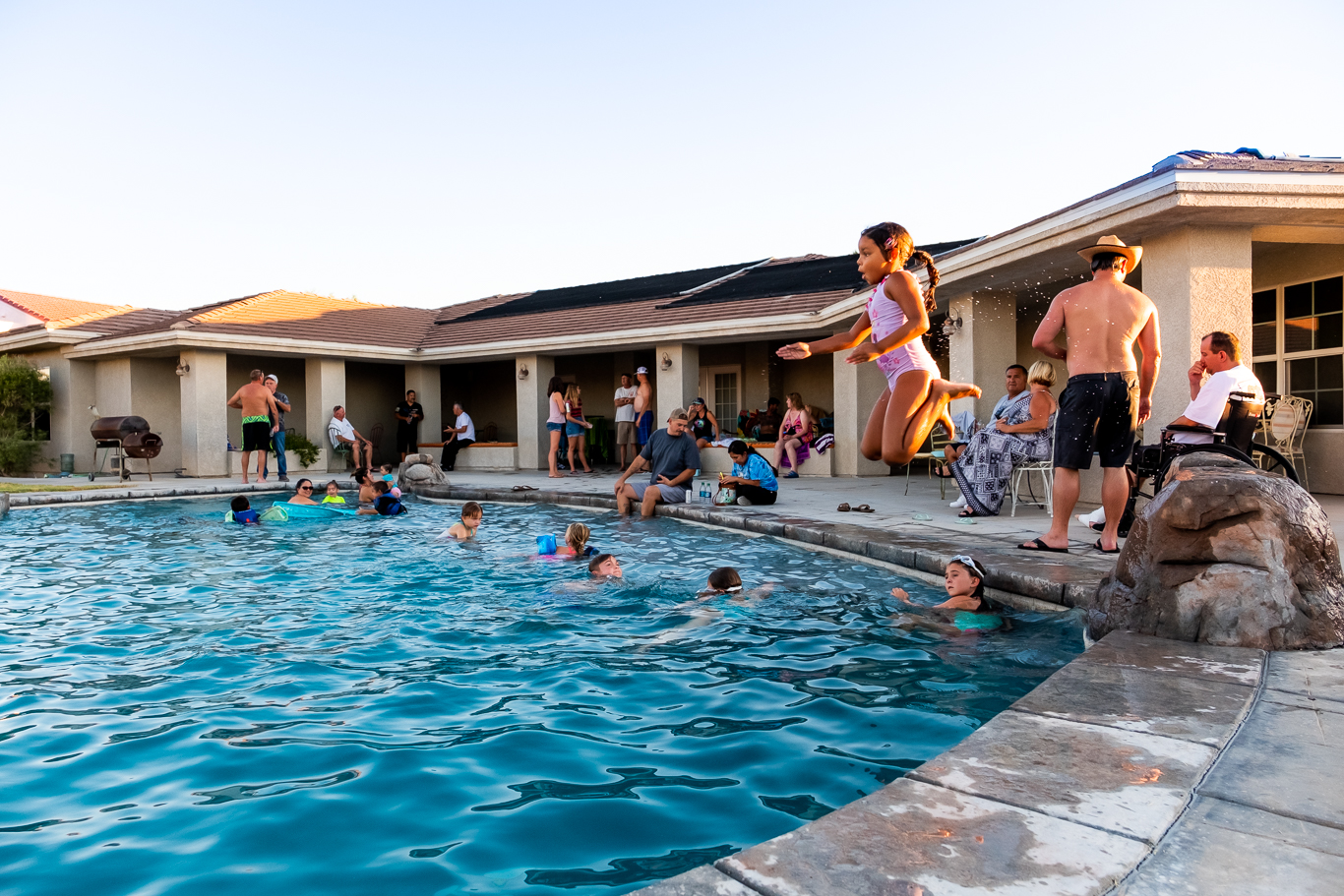 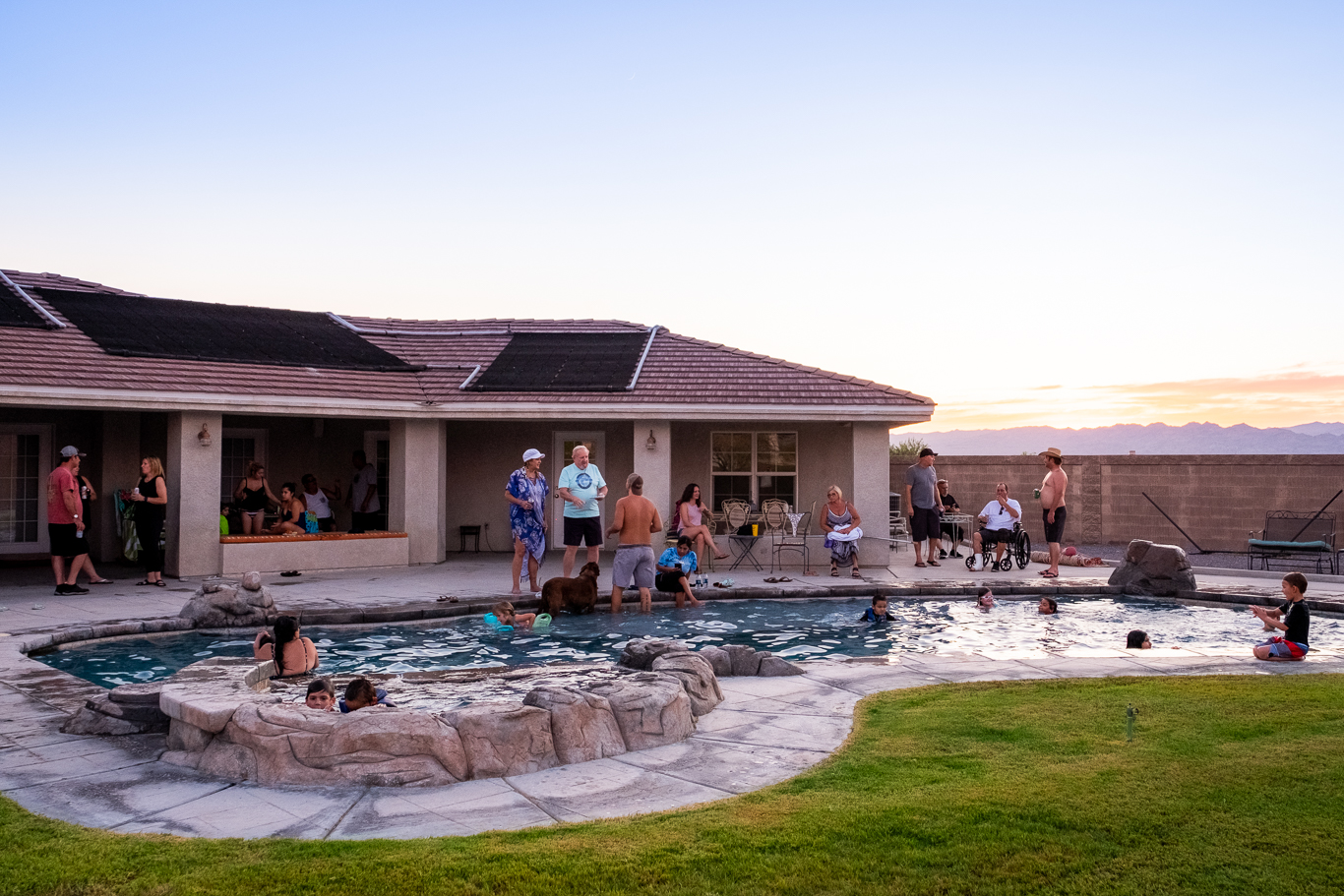 Saturday morning, I met up with Danny and Todd at Danny’s house, just a couple miles from the ramp where we’d be launching. Luckily, since it was a short drive to the water, we were in the boat in no time. It was already heating up and I was beginning to think this was going to be a tough day. The bimini top was down on our boat for the first 15 minutes., but it went up quickly after our first stop. My hat’s off to those without biminis that day. (Speaking of hats… Dave, I lost another one. I blame Danny's 565.) 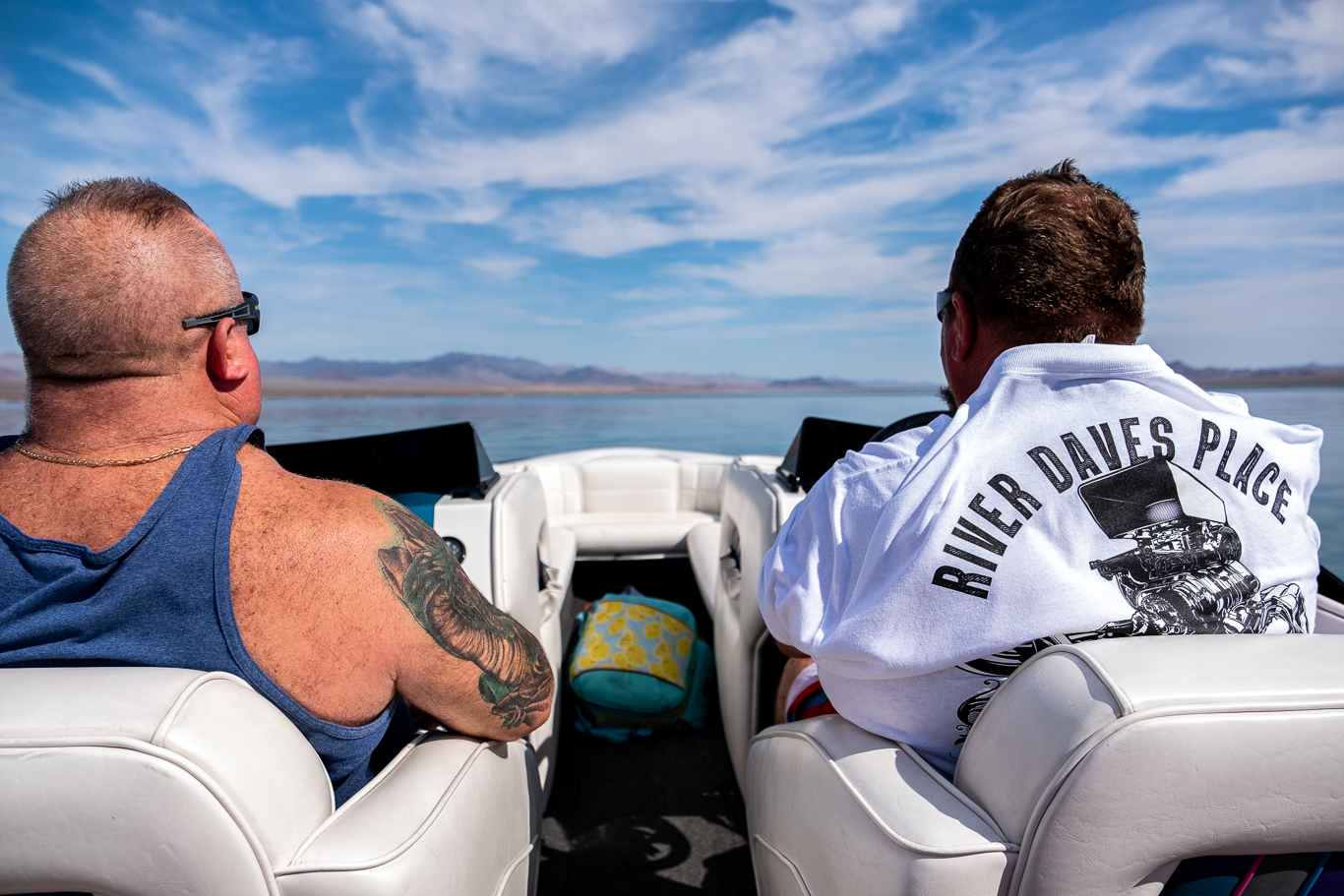 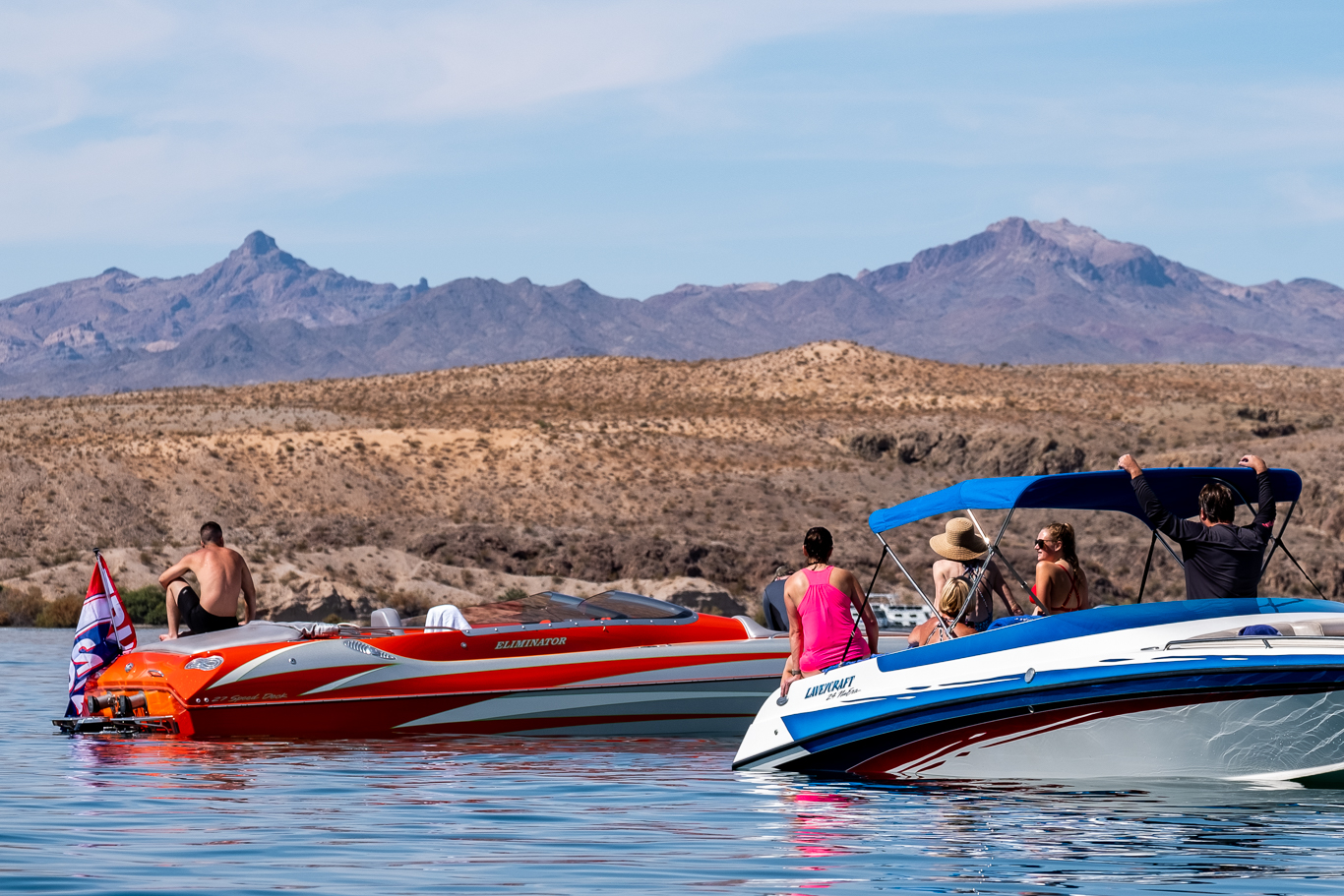 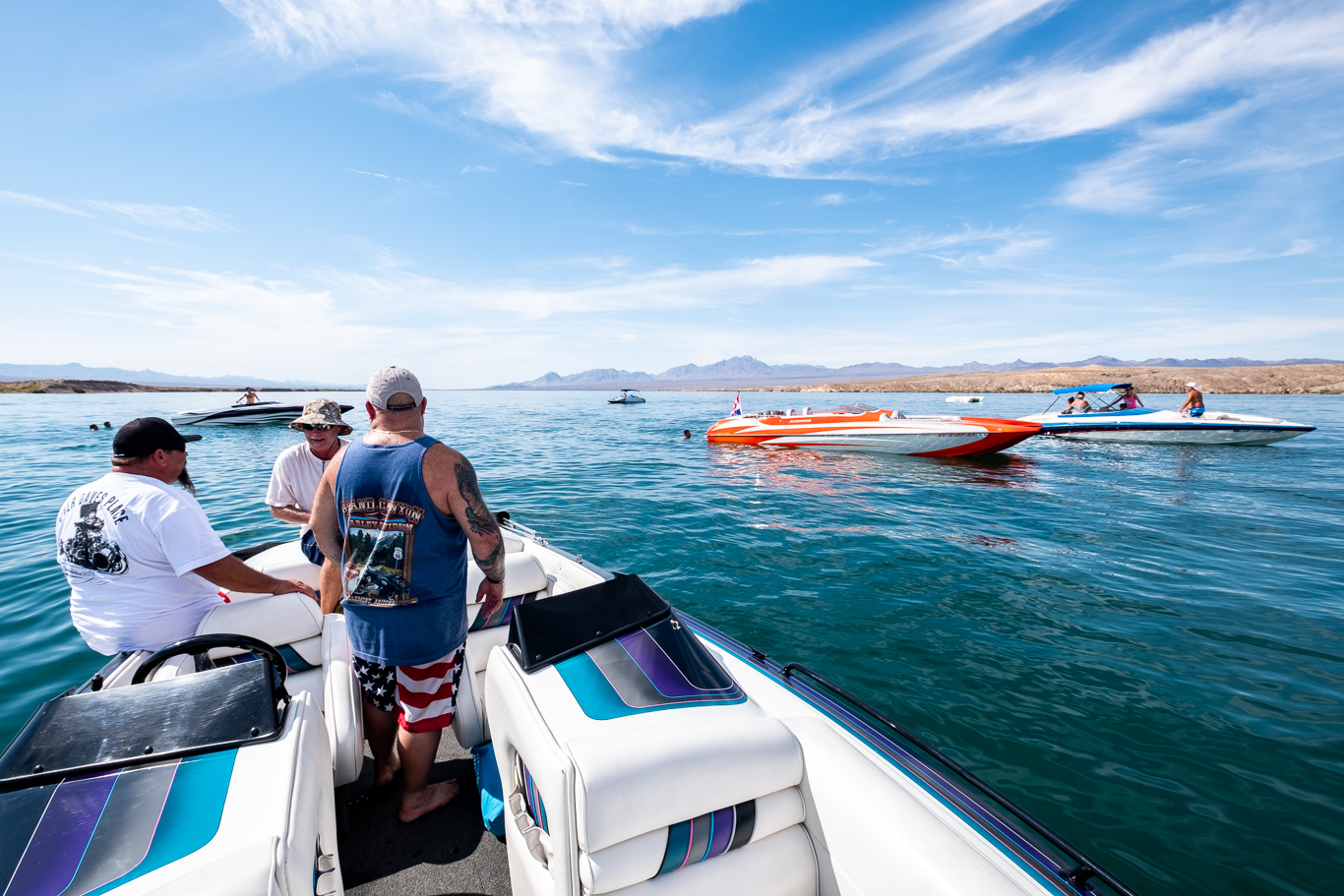 I was trying to get a “plan” of where everyone was going, at what time, etc. but I learned that there wasn’t really an itinerary for the day. This was essentially just a bunch of buddies taking their boats up to the Hoover Dam together. The majority of people seemed to stop together in coves, but we were leapfrogging some along the way. Those stops were welcome as it felt like we were doing 60 mph through an oven. Also, it's always great getting freebies! Xtreme Products was tossing out some product for people to try. 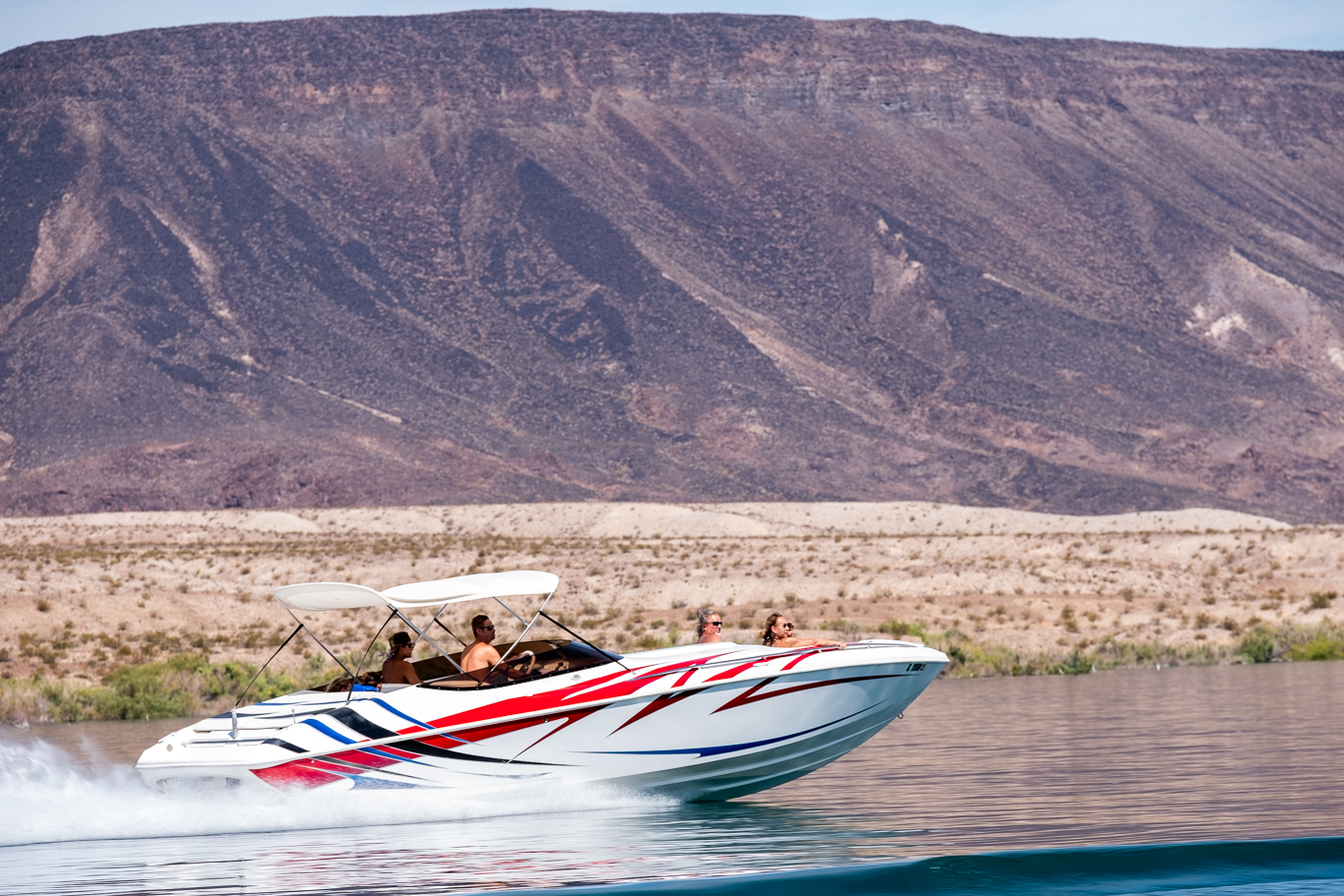 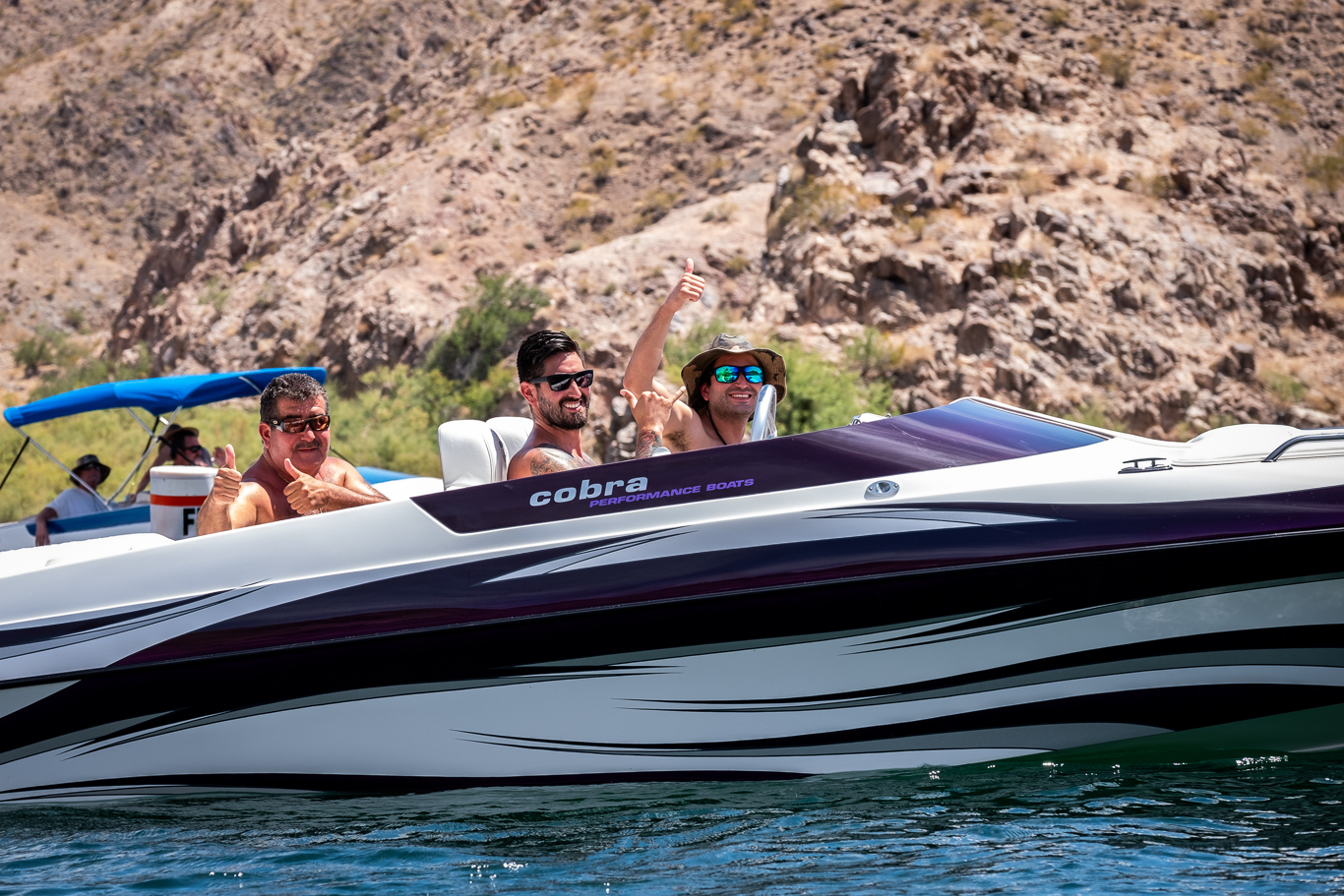 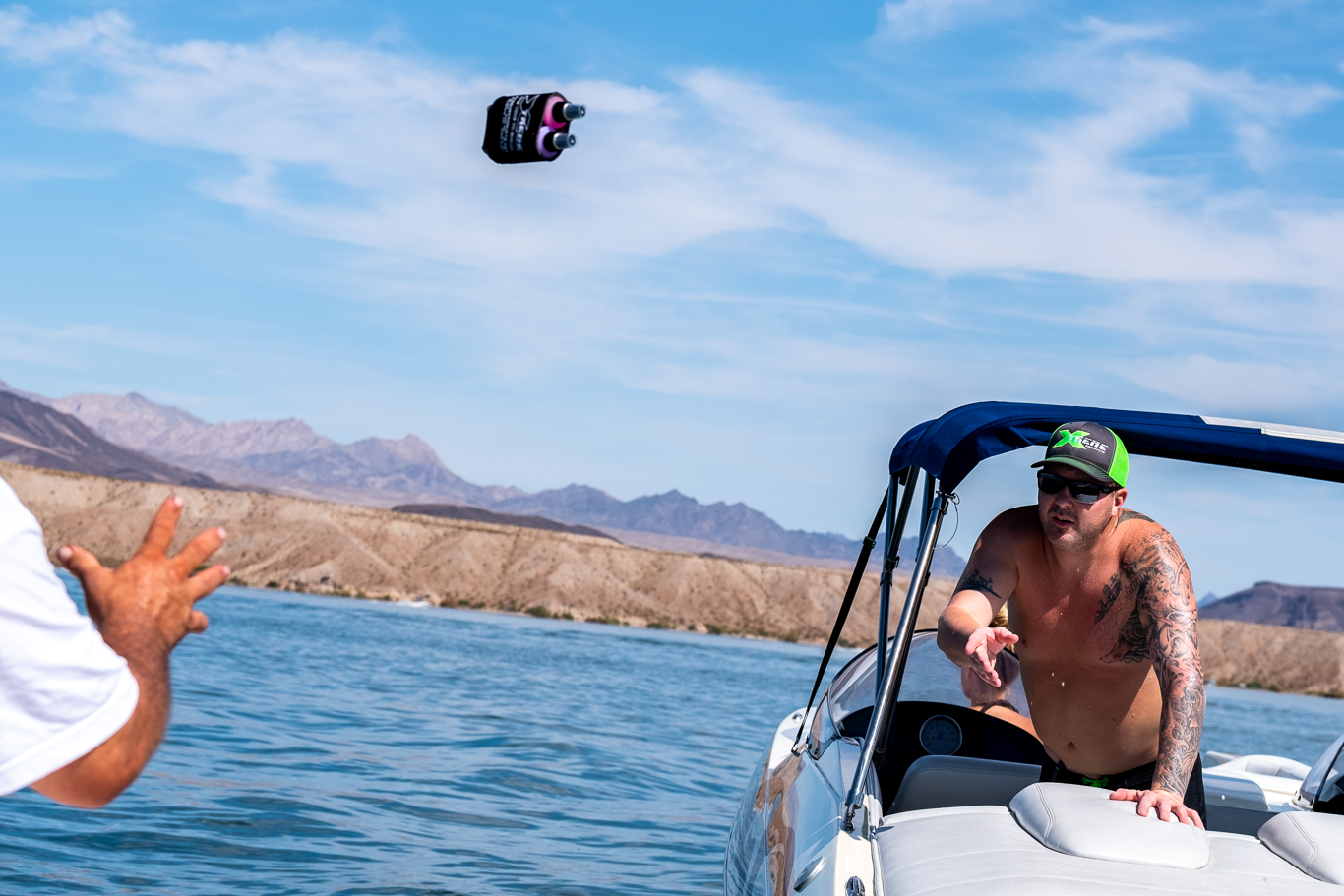 The one thing I kept hearing about this event is how gorgeous it is once we get up past Lake Mohave. Now, I just saw the gorge in Havasu for the first time a couple months ago and am still thoroughly impressed by that. I was in no way ready for the beauty that lined the river some 20 something miles leading up to the hoover dam. It may have been the heat or the fact that I was holding my shutter release down like it owed me money, but my camera must have overheated by the way it was acting. Not the worst thing in the world, though. Seeing this with your eyes, not through a lens, is much more breathtaking. 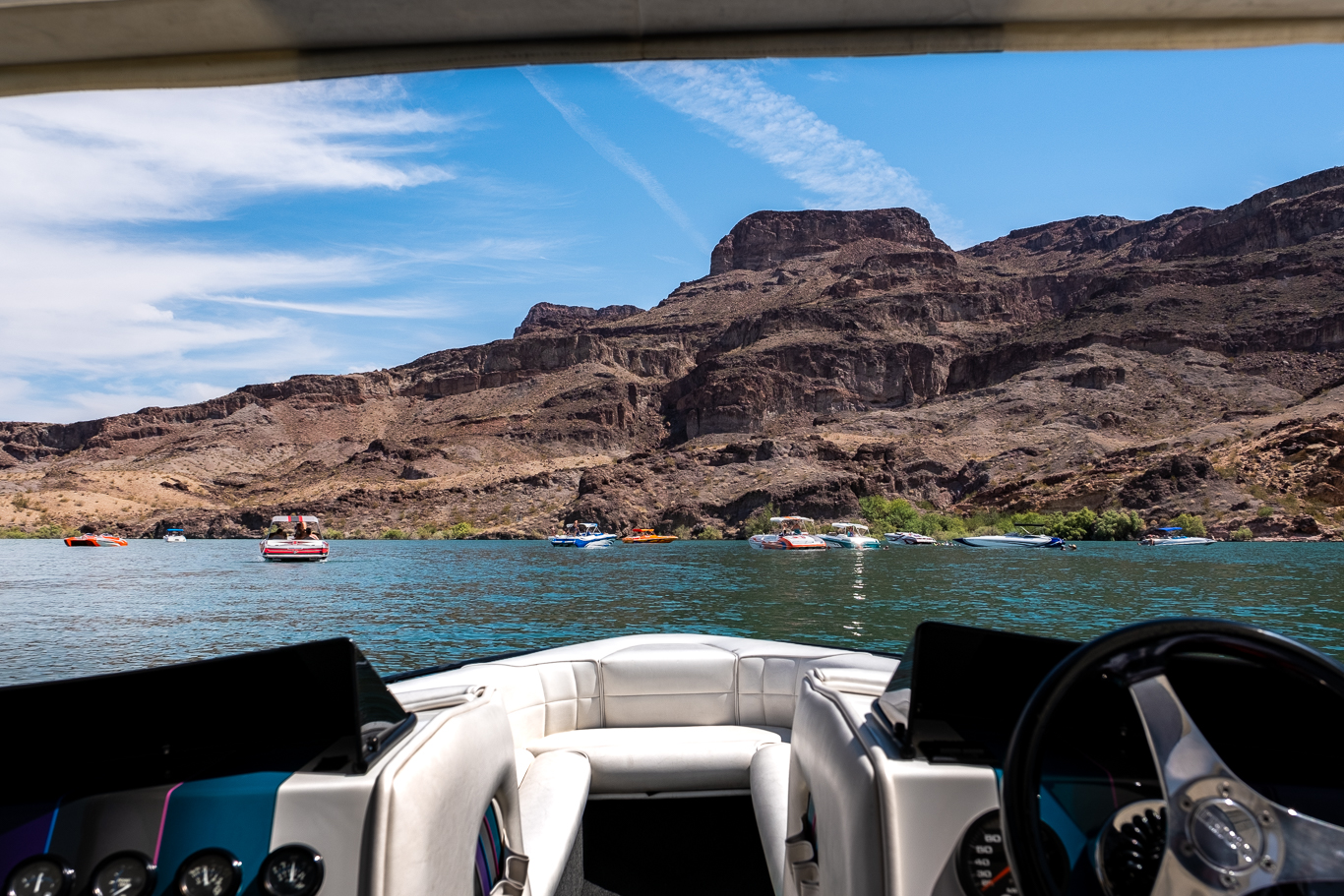 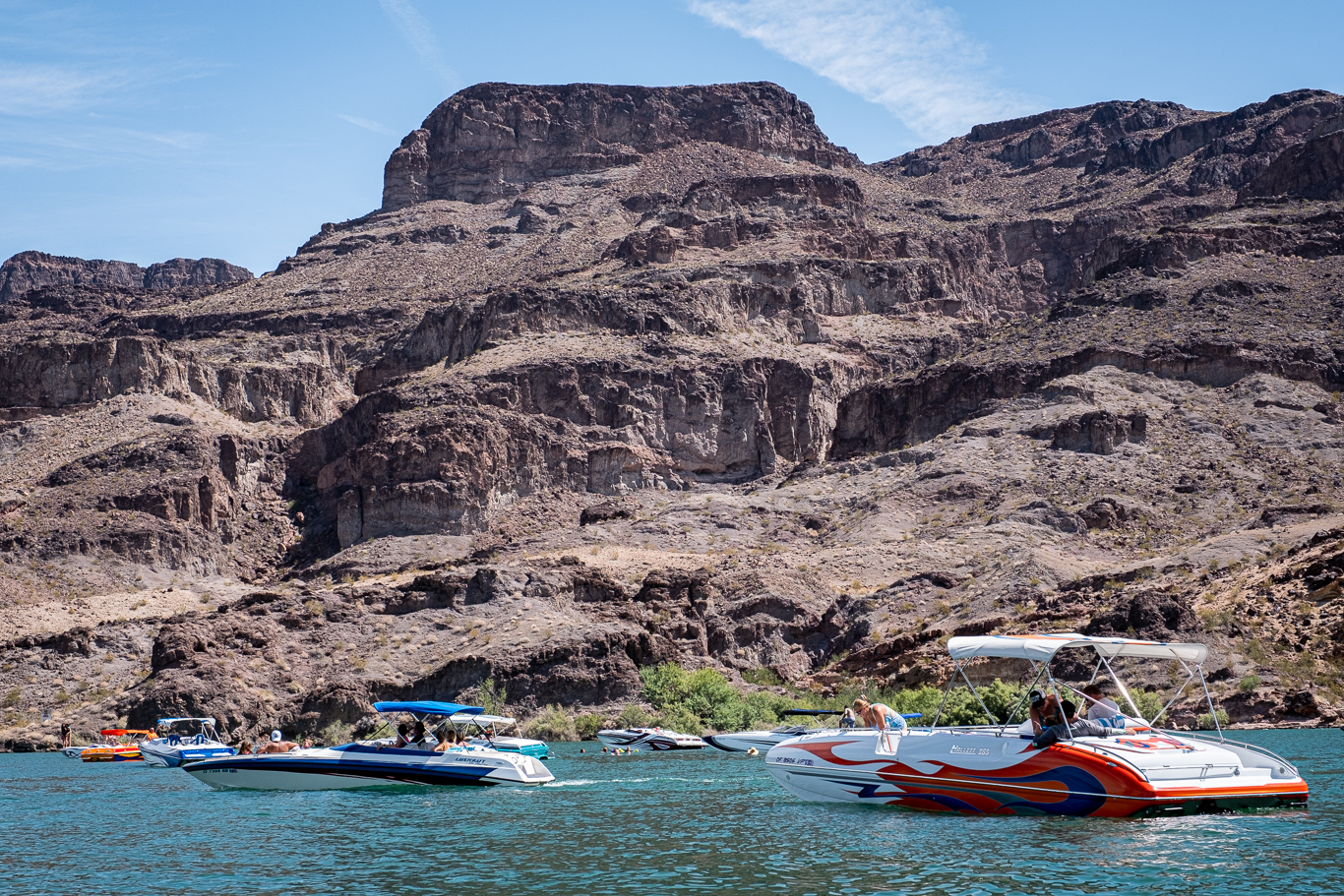 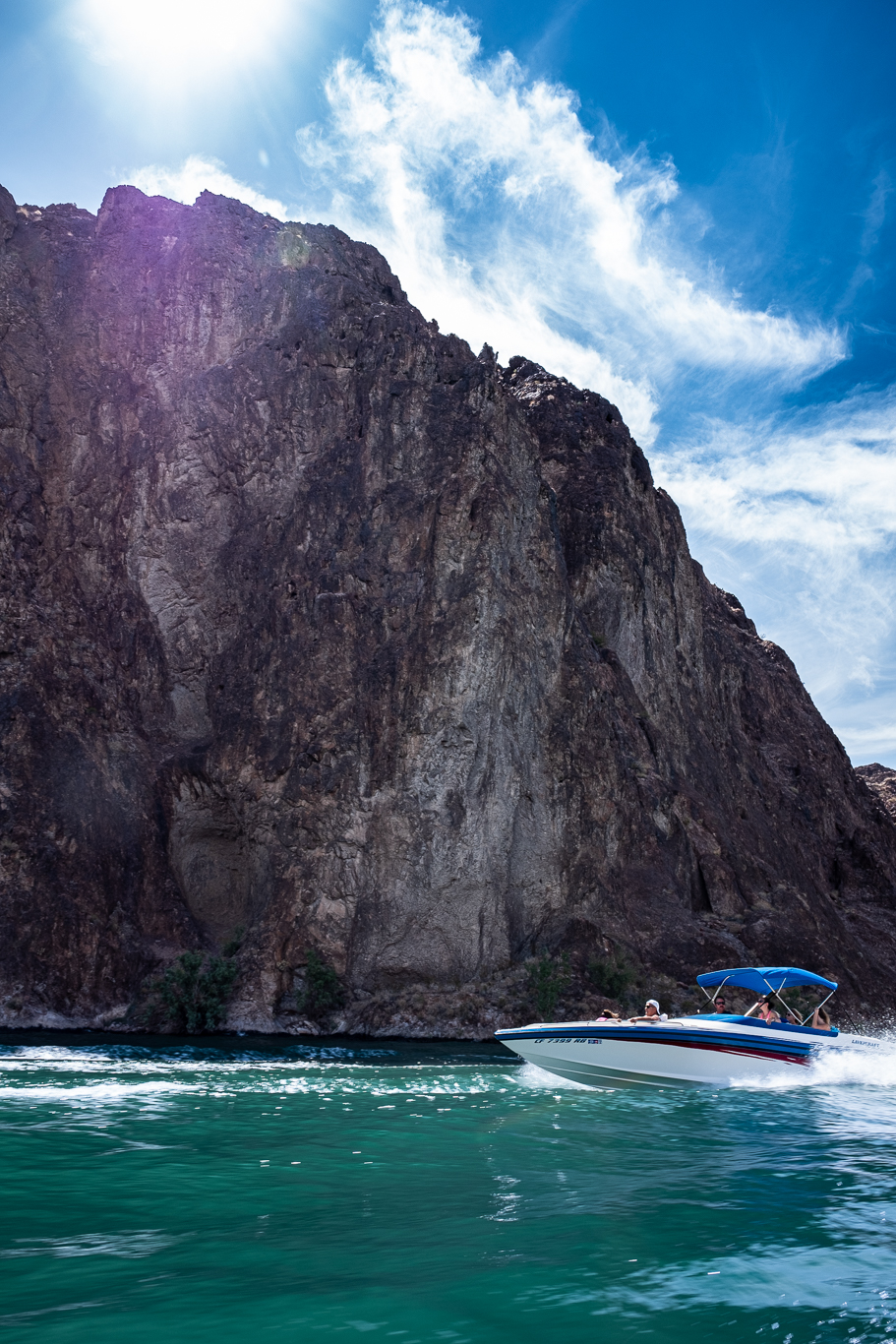 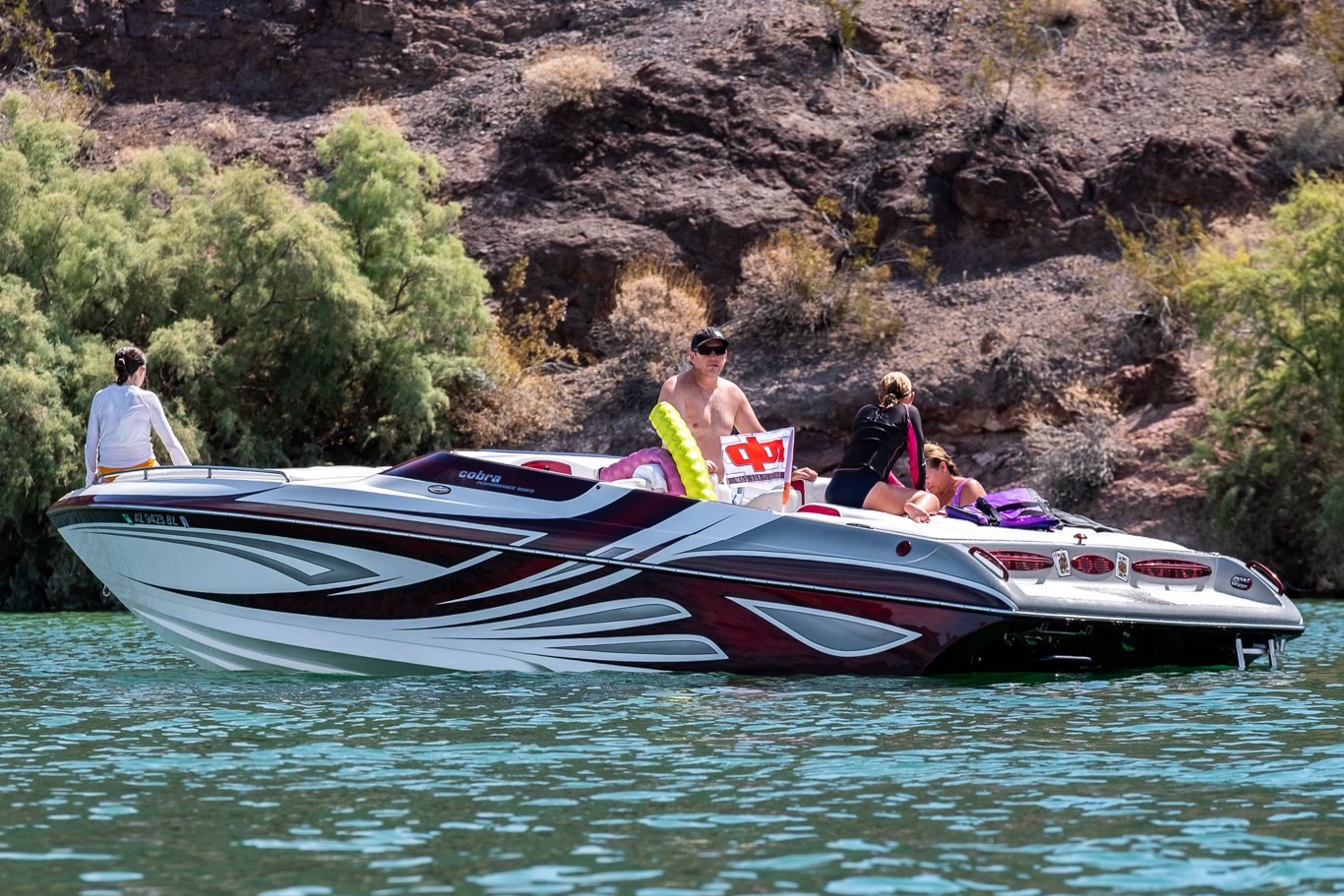 We must’ve passed at least a hundred kayakers along the way; a few didn’t give the happiest looks to a group of loud performance boats going by but hey, we’re all here to enjoy this beauty in different ways. A little more cruising, then the temp dropped; substantially. A quick splash of water would prove why. Water inherently gets colder, the closer you get to the base of a dam. Well, bigger the dam, the colder the water I guess. This seemed to really cool off the air down there in the gorge. A few brave souls jumped in; I wasn’t one of them. 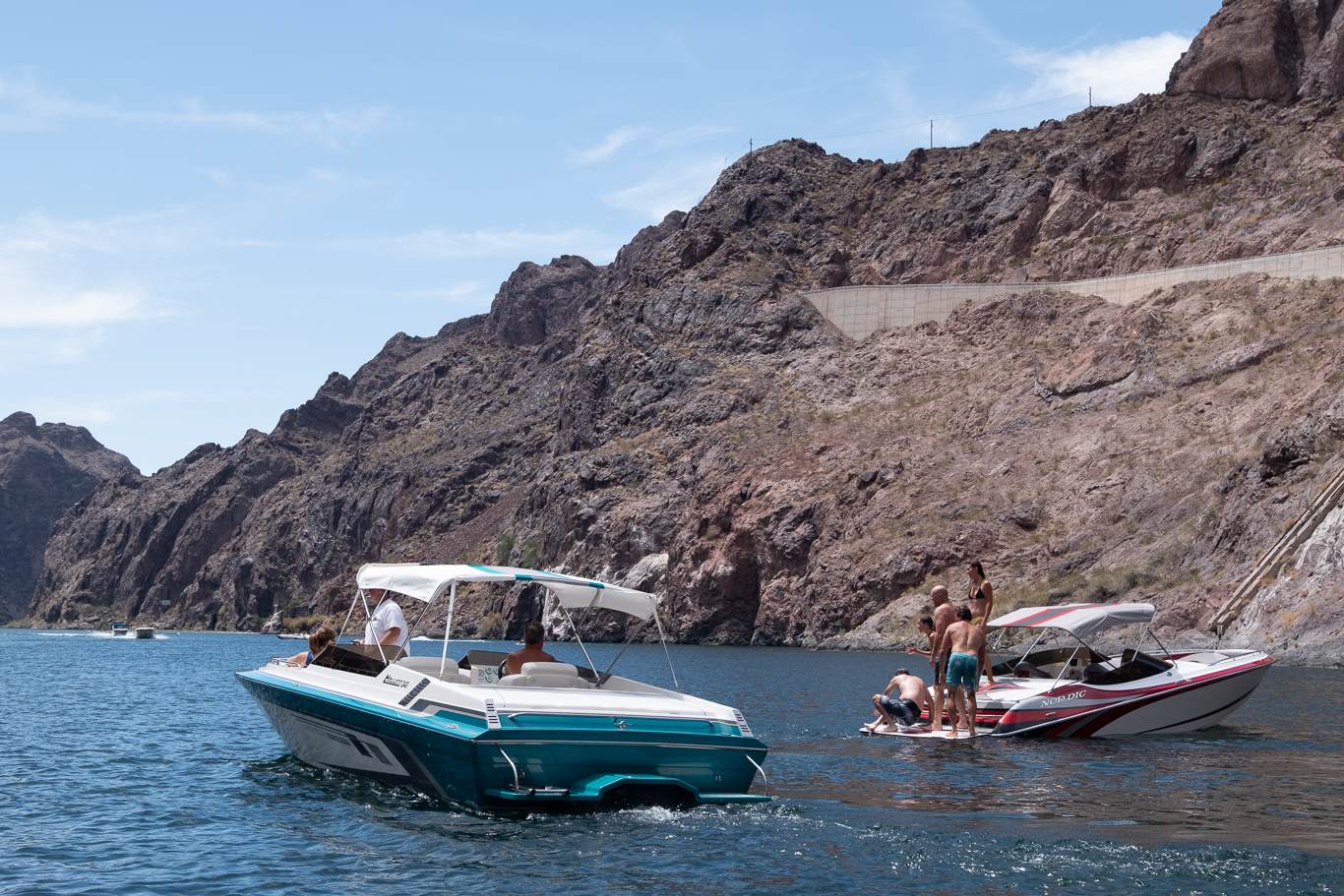 After everyone made the loop at the base of the dam and hundreds of photos taken, we drifted back downriver for a bit. Going slow, there is so much more to just these massive cliffsides. I didn't catch a glimpse of a single ram on the mountains, but others in our group did. Small coves hide along both sides of these massive cliffside. There were more kayakers, scattered sandy beaches, and even some waterfalls. The group filled up a beach with 15 or so boats. People started mingling with drinks in hand, just enjoying a day out on the water in just one of the most beautiful places along the river. This is what it’s all about. 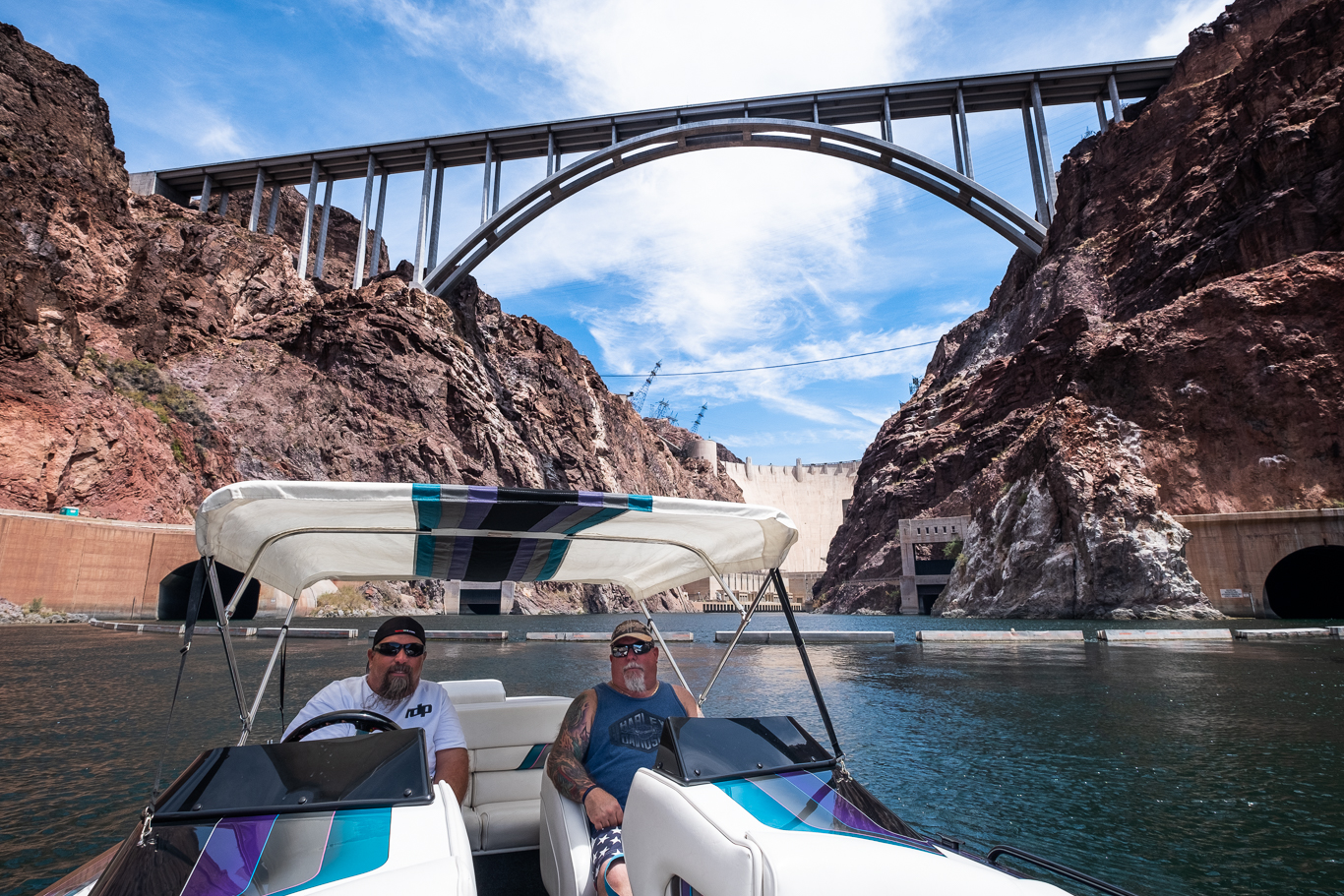 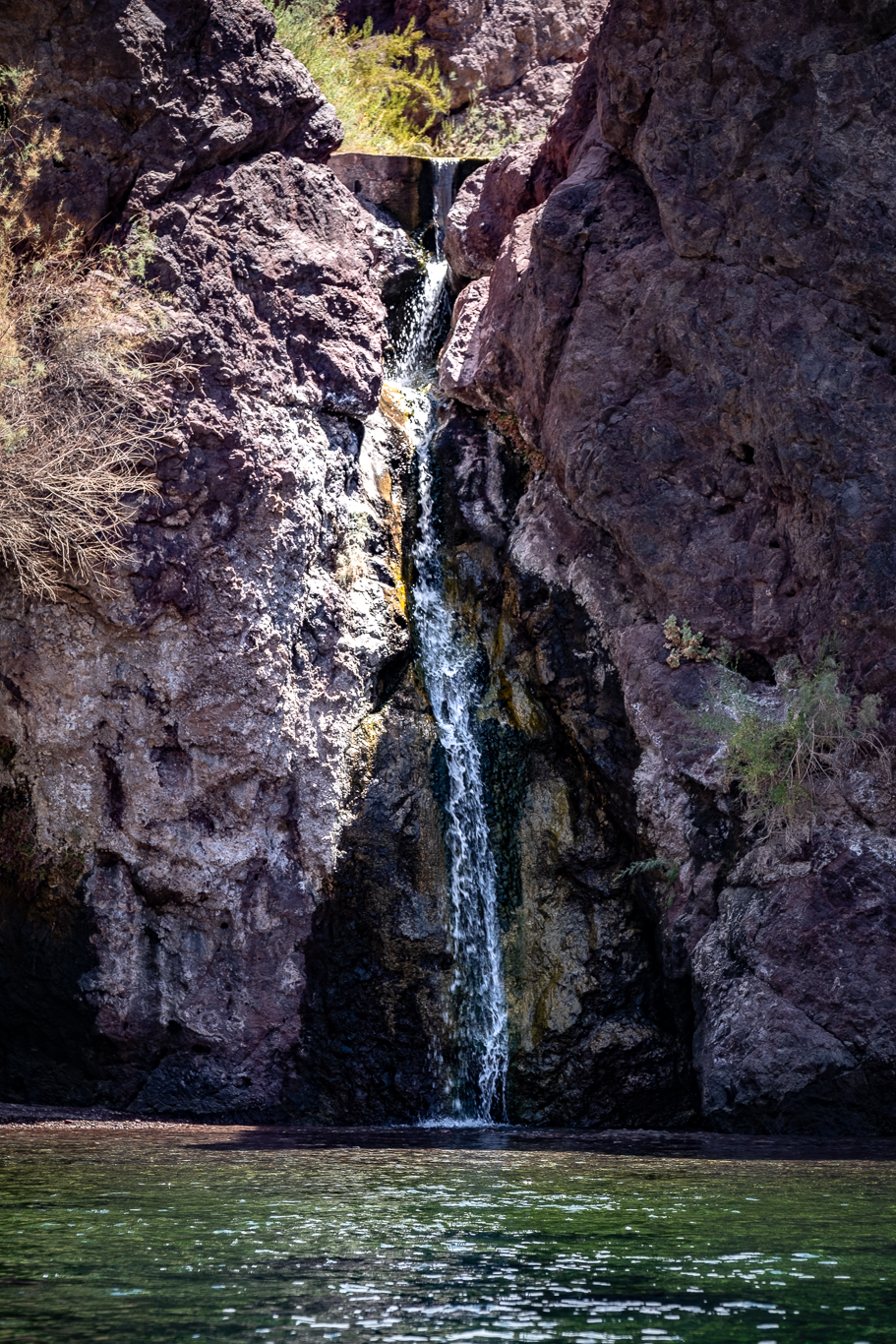 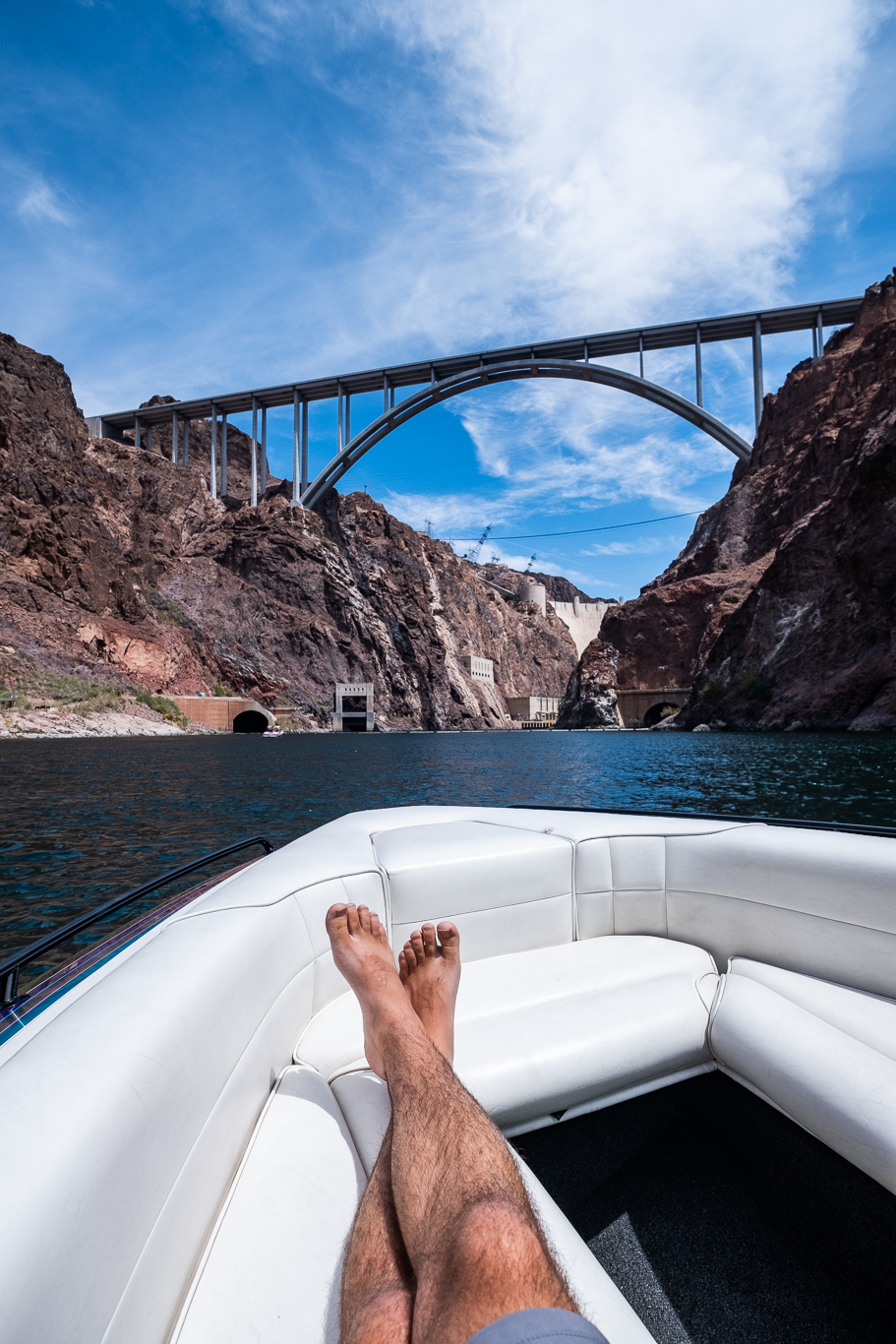 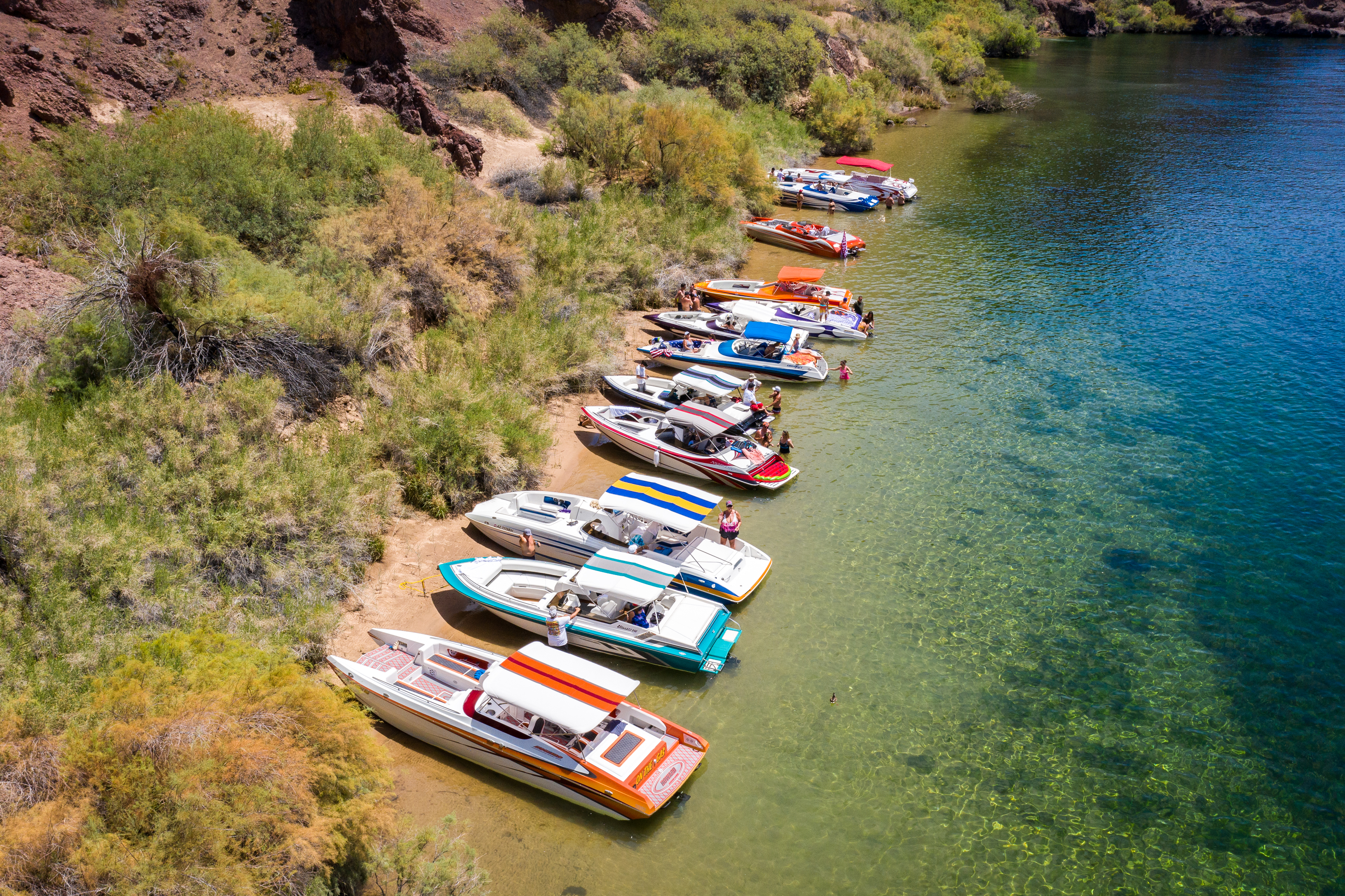 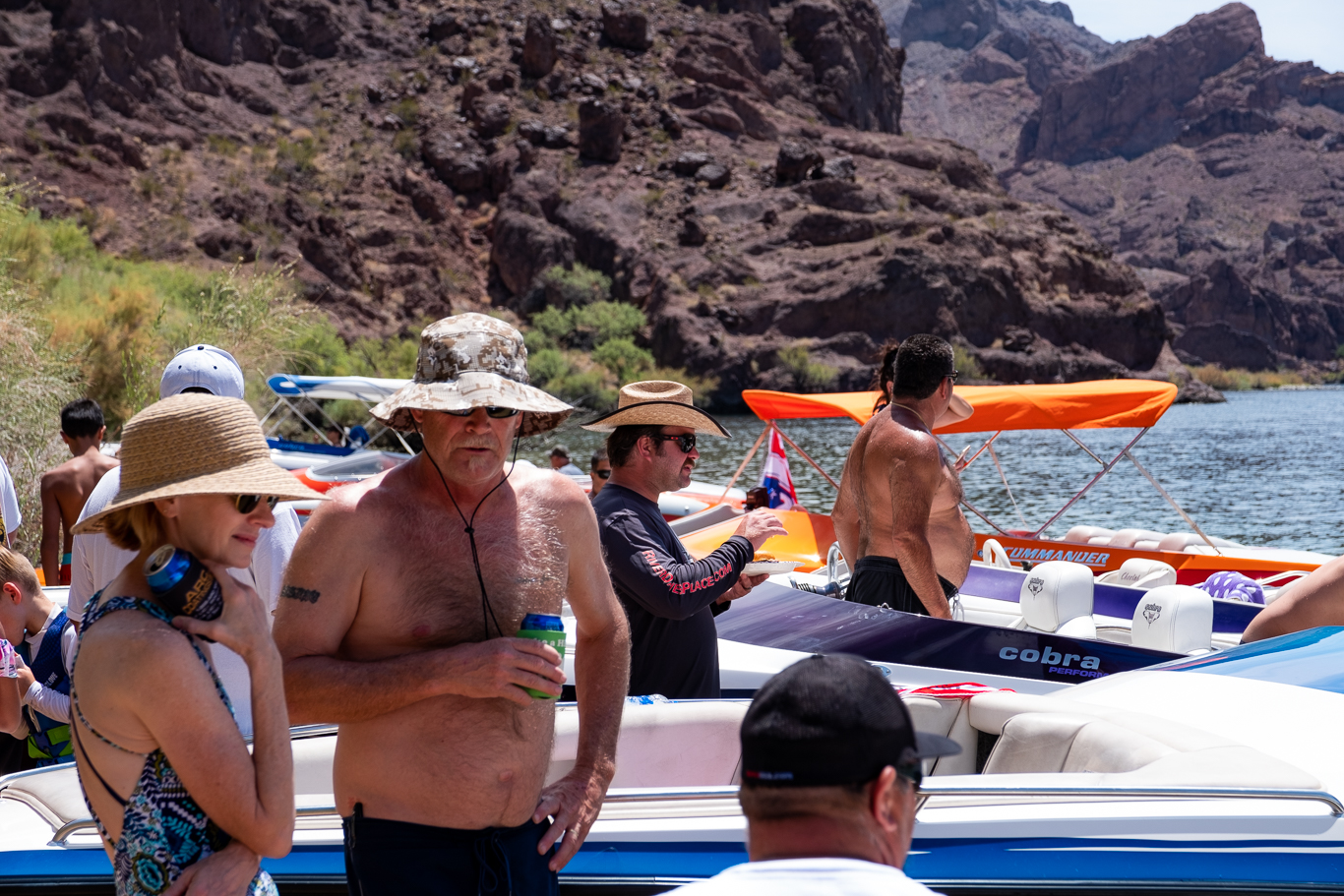 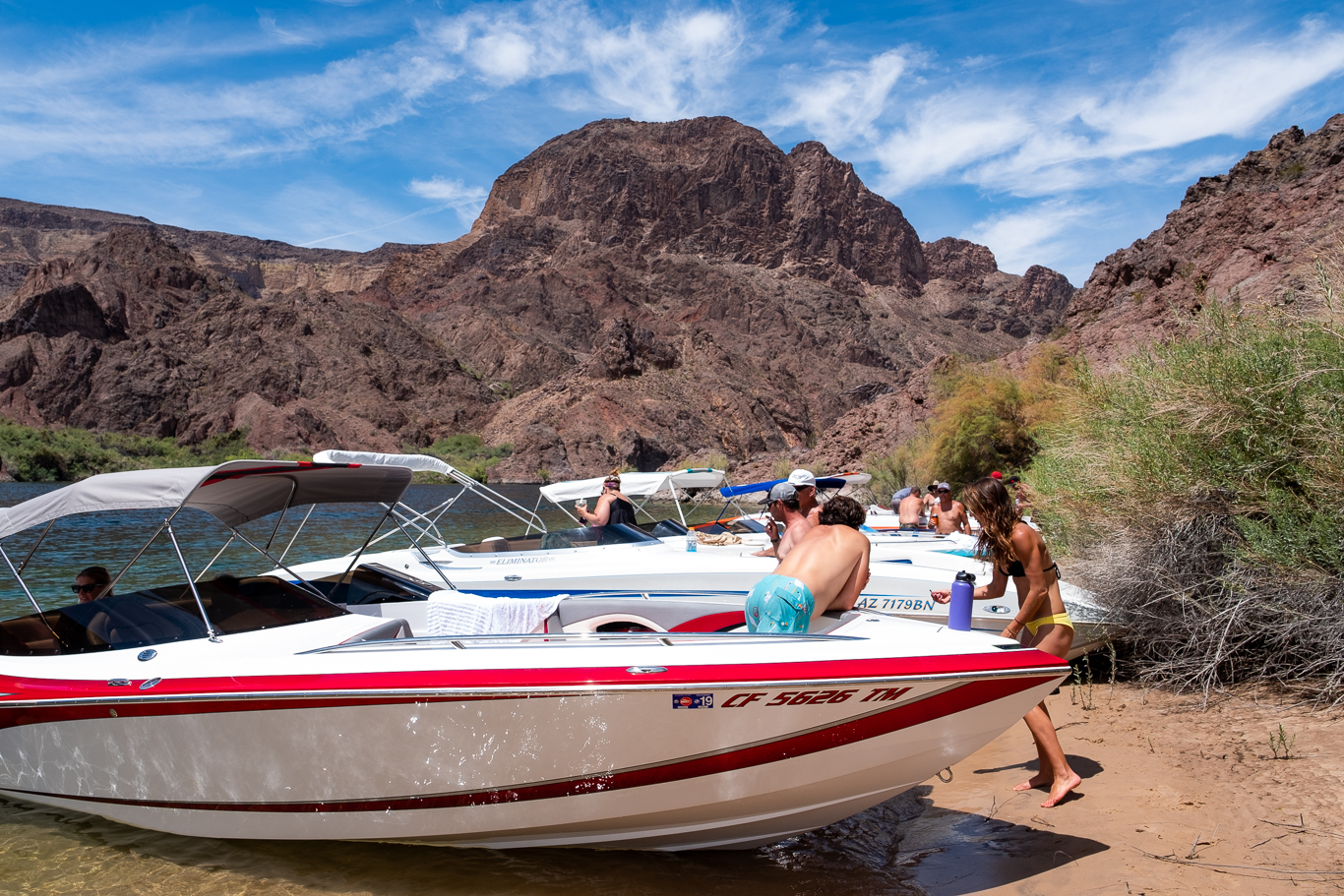 The dam and bridge are an amazing site, and everyone should see it from the water at least once. Vic, thanks for keeping this event going; I plan at being at the next one. I never had the pleasure of meeting Carl, and it sounds like he was an incredible guy who had a love for boating, just like everyone I met on this run. If you have a chance to do the Damn Dam Run with this awesome group of people, mark your calendars for the next one. You won't want to miss it. 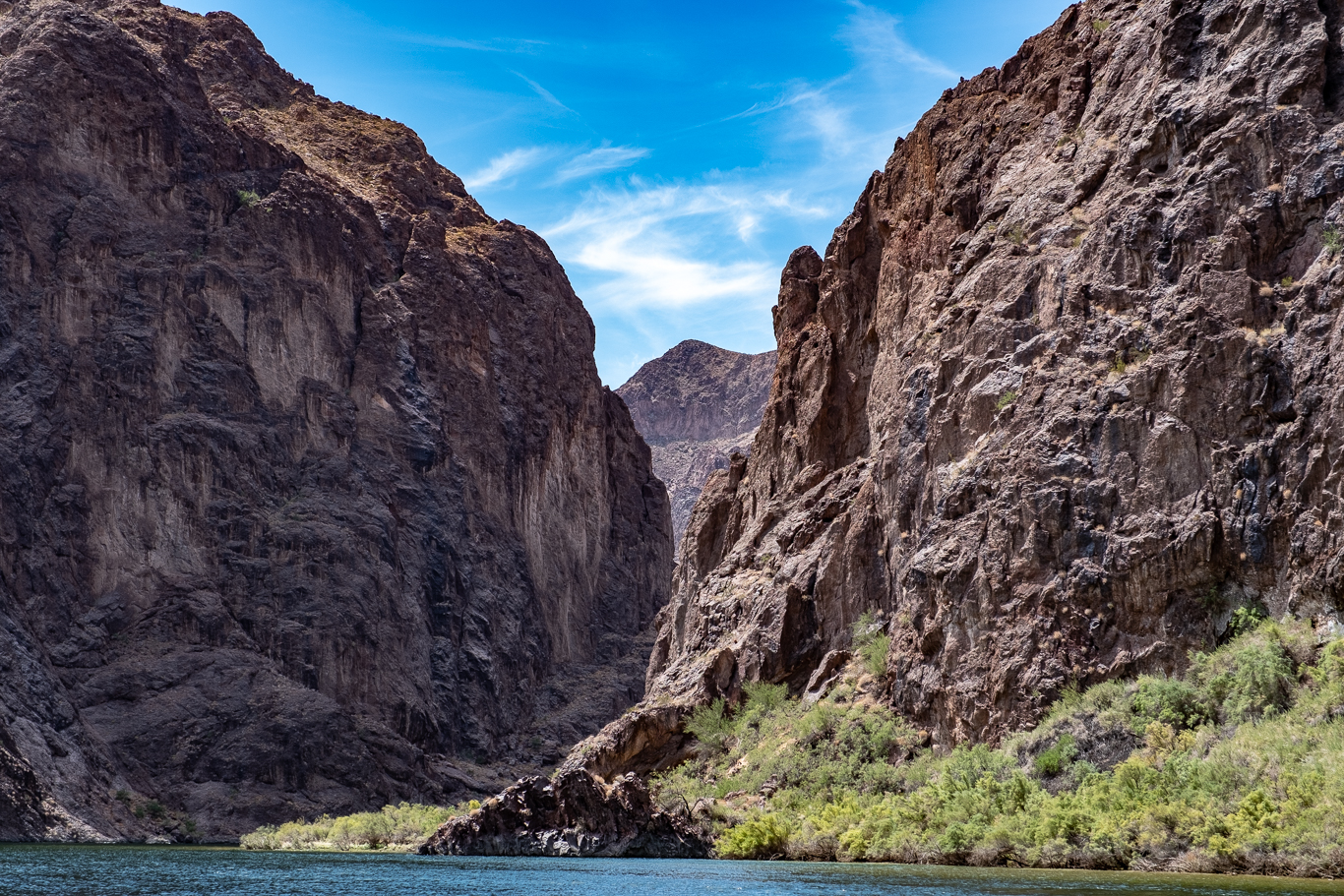 All of the photos from the event will be posted in the 2019 Damn Dam Run forum thread! Thanks for a great Saturday everyone!

Great story and photos, Austin. Hope I get a chance to do that some time.
Awesome write up and great pictures
Read more…