DCB Delivers it's latest M33 to Chad and Diane Budge!

Article Gallery
DCB has completed and delivered a "custom" M33 for Chad and Diana Budge! Now all DCB's are built to the owners specs so technically all of them are "custom." The reason that I used the word in the opening statements of the article is to say that this DCB truly isn't like any of the other ones out there to date! We originally saw Timmons changed the transom on his boat to give it a slightly different look.

Chad took that a step further by carrying that rounded edge not only across the outer edges, but across the whole transom and added recessed troughs dedicated to the rigging hoses for the outboards. It wasn't cheap, but it really did finish off the transom exactly the way he envisioned it, while also proving that DCB is capable of building anything a customer desires. The price tag isn't for the faint of heart, and the process can be repeated again on future builds for around 7500.00. 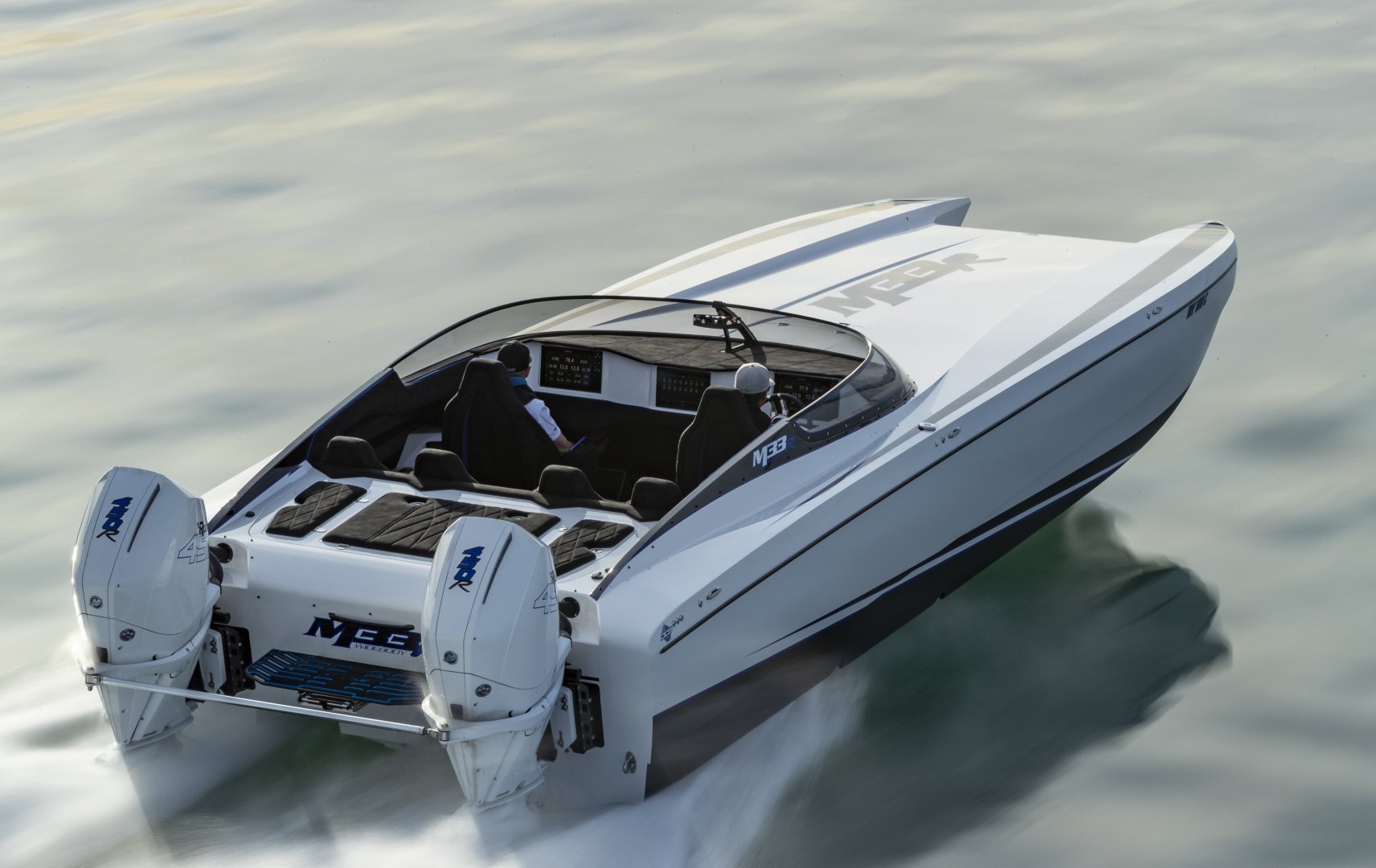 By comparison the factory transom would typically have a flat where that rounded off edge is and the outboard hoses would land on the top cap typically. 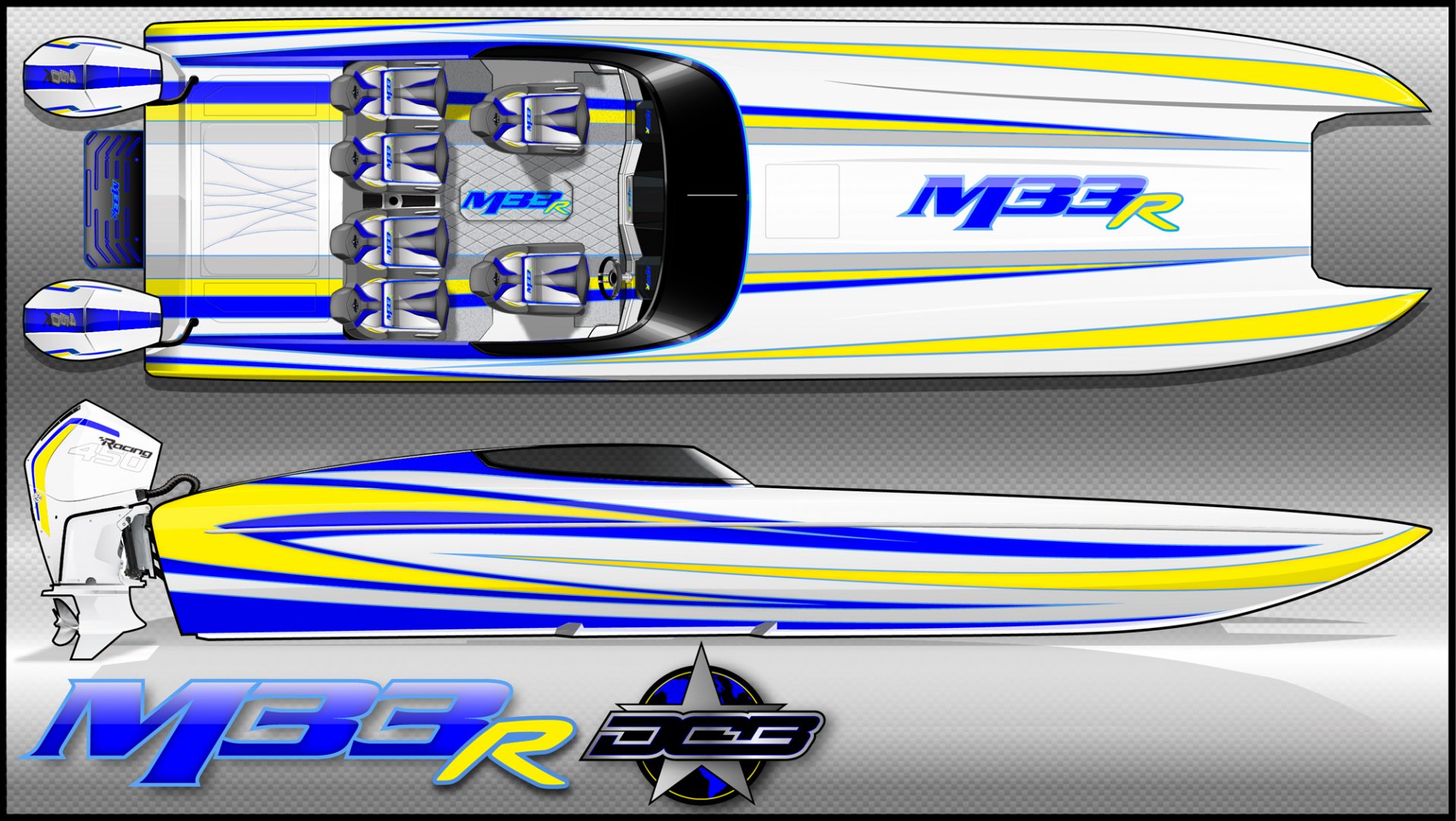 This is a very subtle difference and most wouldn't notice it, but lets be realistic when you are building a brand new DCB you are catering to people with discerning tastes, and it was something custom that I thought was worth mentioning.

Chad and Diane have been around the boating seen and have a resume of boats that starts off with humble beginnings in the form of a Glastron with a Merc 260. In talking to him on the phone his love and passion for boating was pretty obvious as we went through the list of boats he has owned in the past, he would chuckle and relive for a brief second a memory or two. When talking about the Glastron he was laughing and saying "You know Dave that was a pretty fast boat back then! I think it topped out at almost 60 mph!" 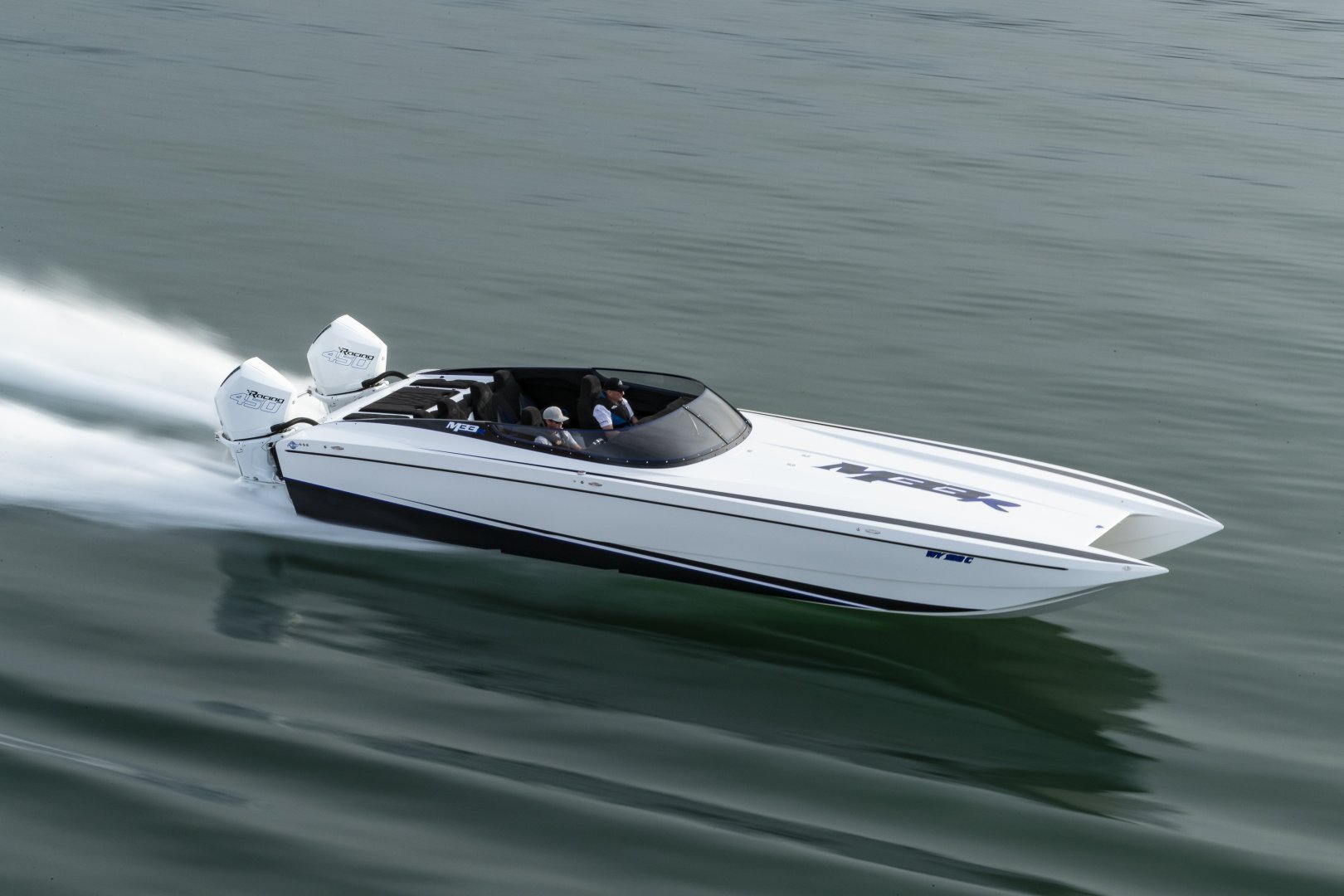 After the Glastron they stepped into "big boat" life in the form of an Eliminator 24 Mohave. For those that remember that model was the one with the giant windows on the deck. It didn't take long for him to get the itch, and the motor upgrades started and with the speed came the constant problems of reliability with it. I have to admit I don't think I've ever seen a hopped up Mohave, but Chad had one. They moved onto a 27 Victory and from their went back after the speed bug in the form of Several 28 Bullets. It should be noted that from the Mohave on almost all of these boats were powered by mild to wild Pfaff power! 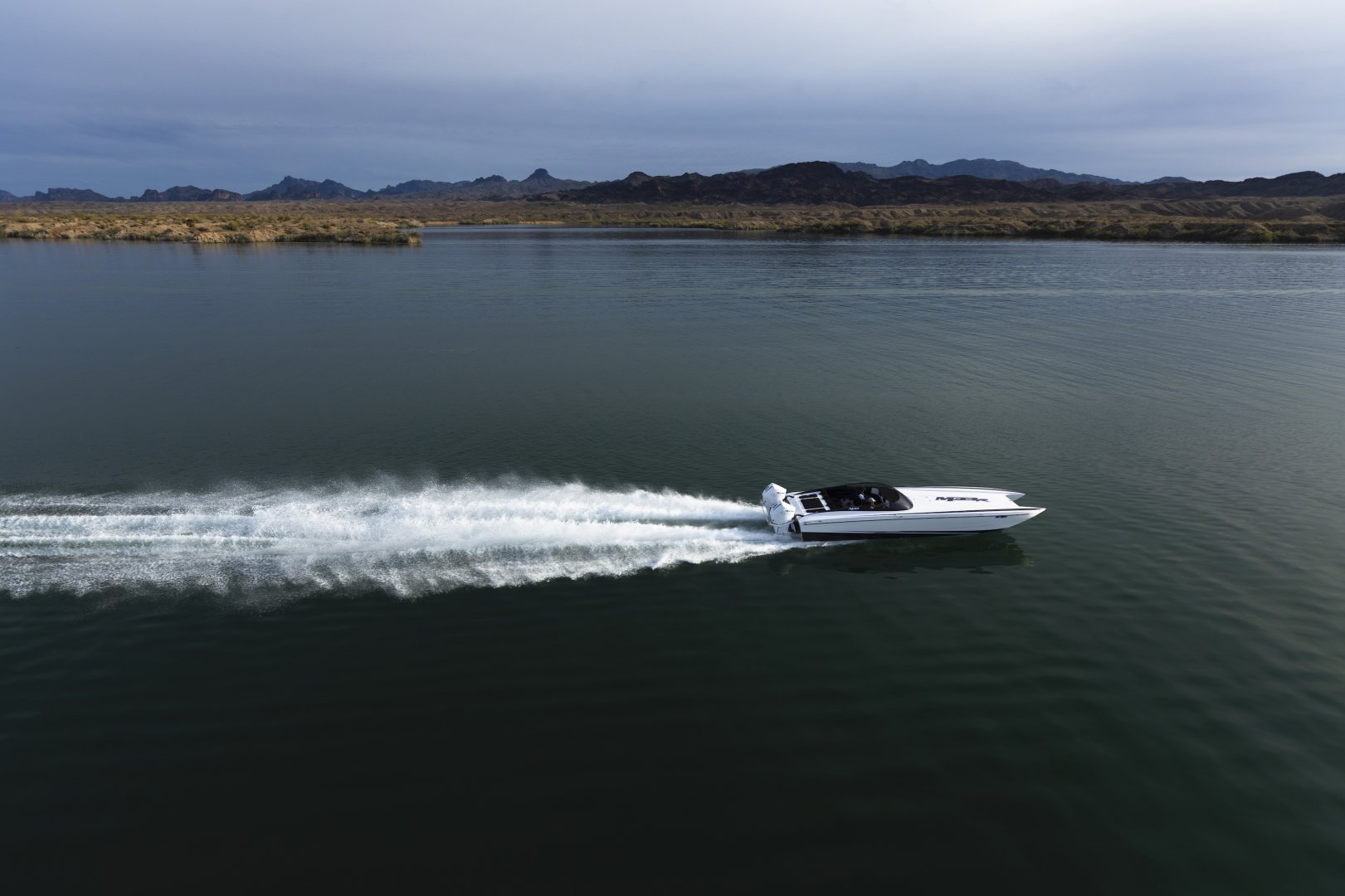 At some point down the timeline they took a ride in a friends DCB M31 with 700's, and that was a game changer. Putting up #'s that are almost impossible to do with a Vee, and doing it in comfort is something that once you experience it's hard to go back. It was only a matter of time and they ended up owning that very boat, and starting their journey down a rabbit hole that would ultimately land them in what would be the peak of their performance career in another M31 with 1100's. 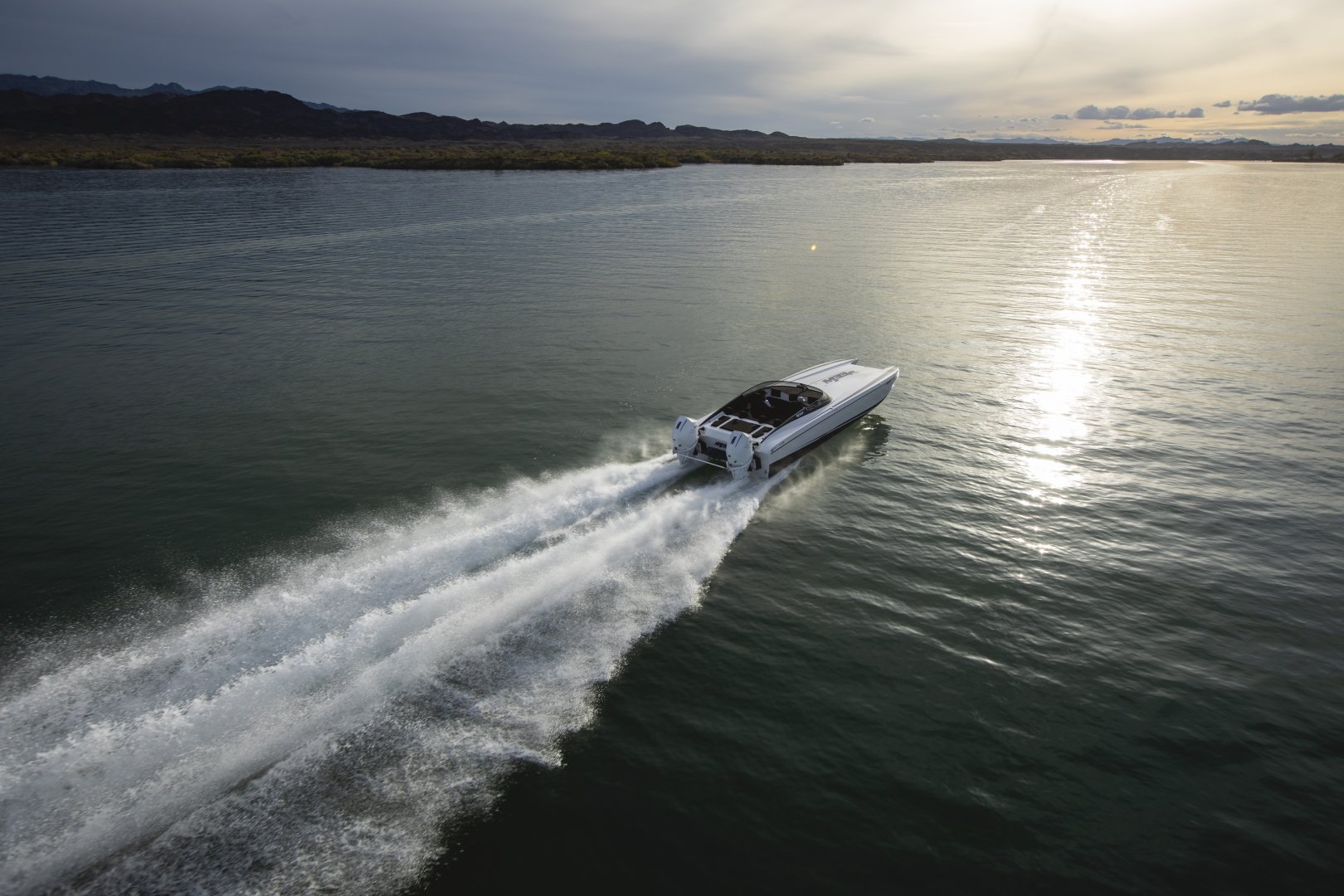 Like most they have drifted over to the Outboard side of things in the hopes of fun yet still high performance boating without the drawbacks of the I/O's, so they shifted to a M33R with 400's. They enjoyed the boat, the reliability, and overall decrease in costs with the outboards they had finally hit the trifecta. Things seemed fine until they happened to drive one with 450's which brings us to now.

According to Chad the punch of the 450's and overall performance gains was absolutely worth the transition. With this latest build he got exactly what he was looking for, and he couldn't have more praise for dealing with the Team at DCB. It's rare you find a boat company that to paraphrase Chad "Says what they do, and does what they say." He had some custom ideas and they pulled it off, not only with the glass work, but exactly what he wanted for the rest of the build. 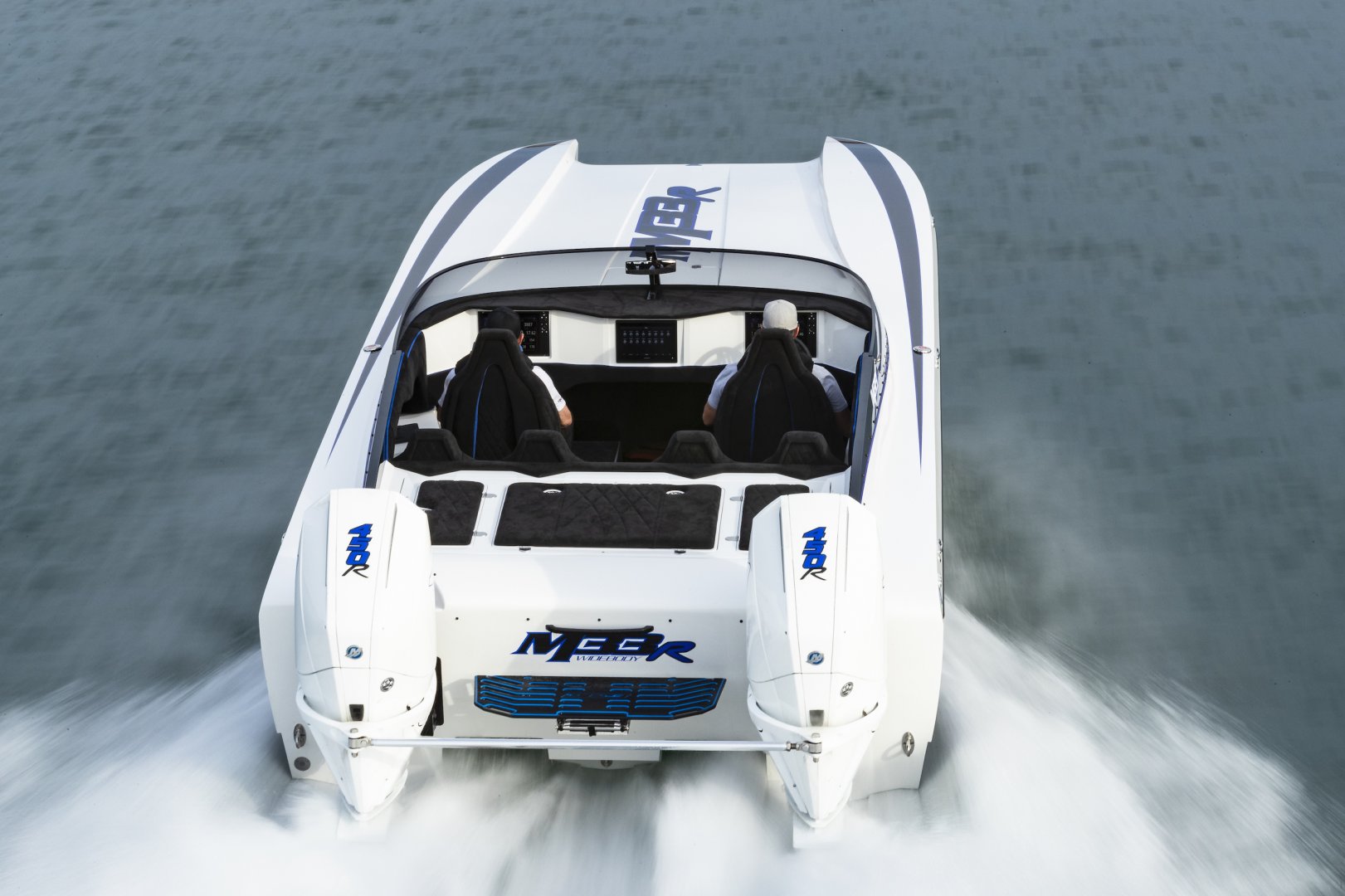 We took a minute and asked Chad what his favorite aspect of the M33R was compared to the boats he had owned in the past. He was quick to say "The boat is completely docile and anybody can drive this boat." While his wife has plenty of experience under her belt from decades of boating Chad chuckled when he said "My wife was just running it a little over 100 mph right now. We stopped to call you back!" 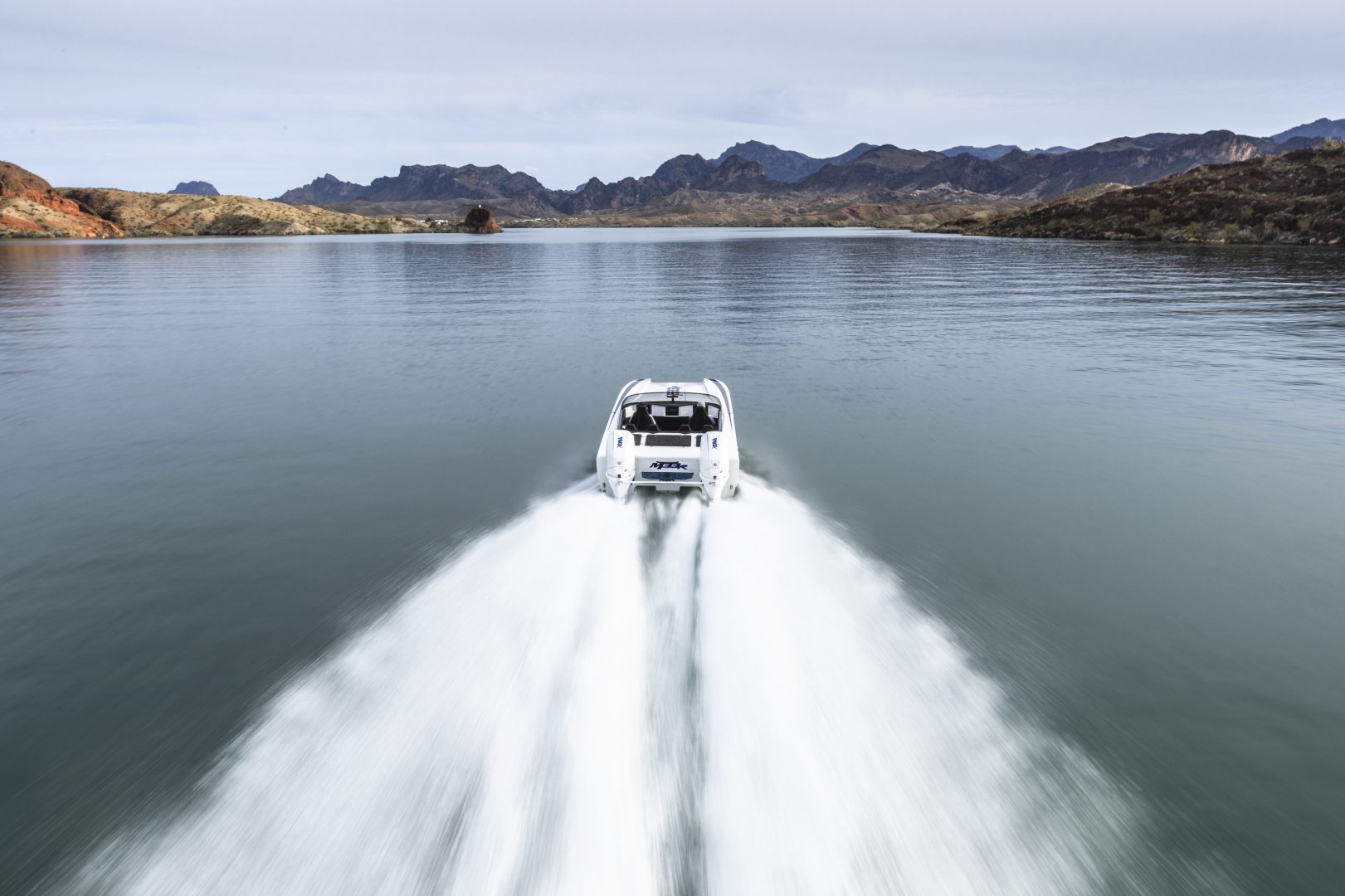 The Budge family is located out of Wyoming, but you can look for this boat regularly at Jackson Lake, Faming Gorge, and even up at Shuswap in Canada! If you seem them out on the lake they are very friendly and approachable people that love being out on the water so make sure you say hello.

Chad, while your favorite aspect of your new 33 might be the handling characteristics, my favorite part of the build is the timeless graphics you chose, and how the boat looks at rest in the water! 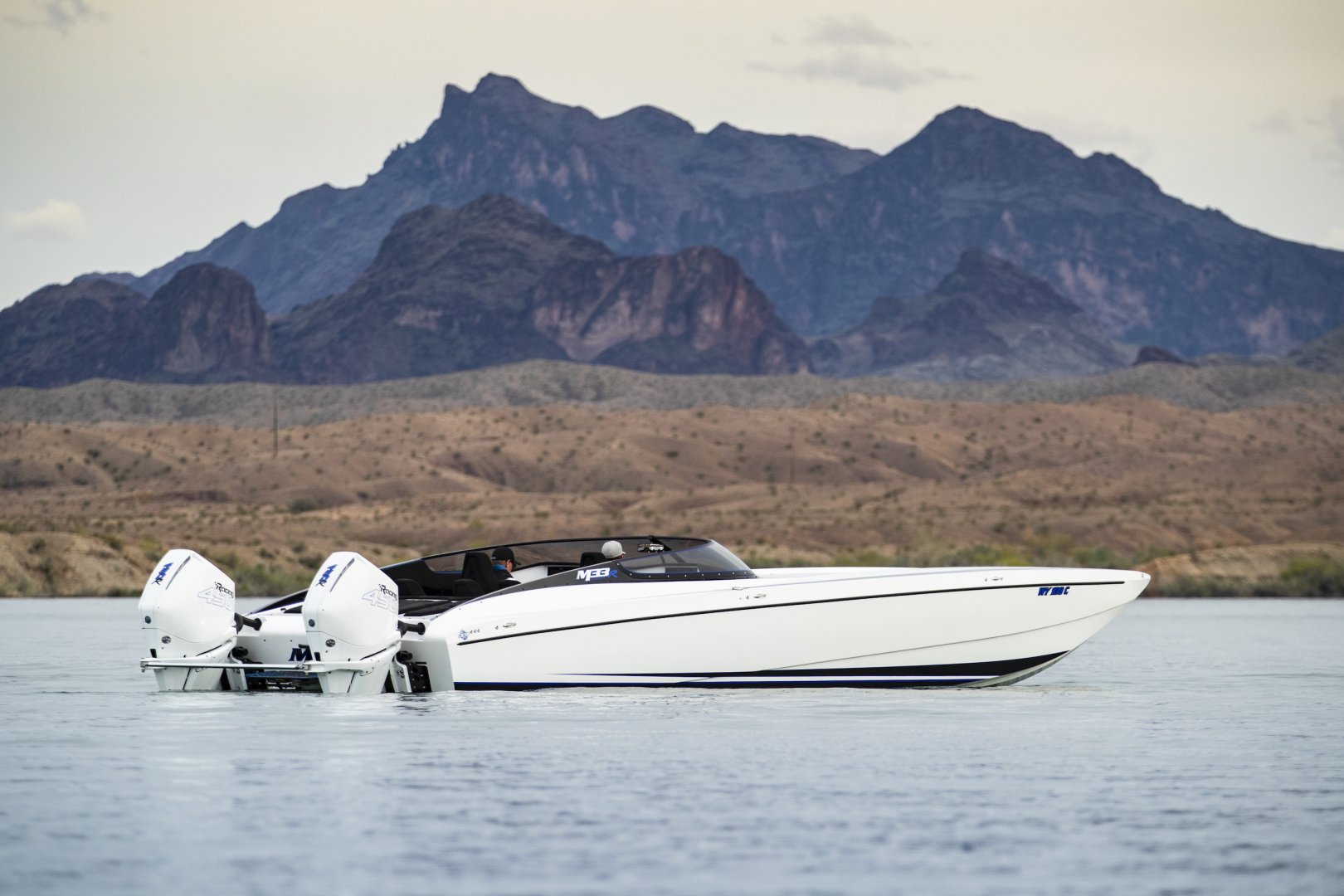