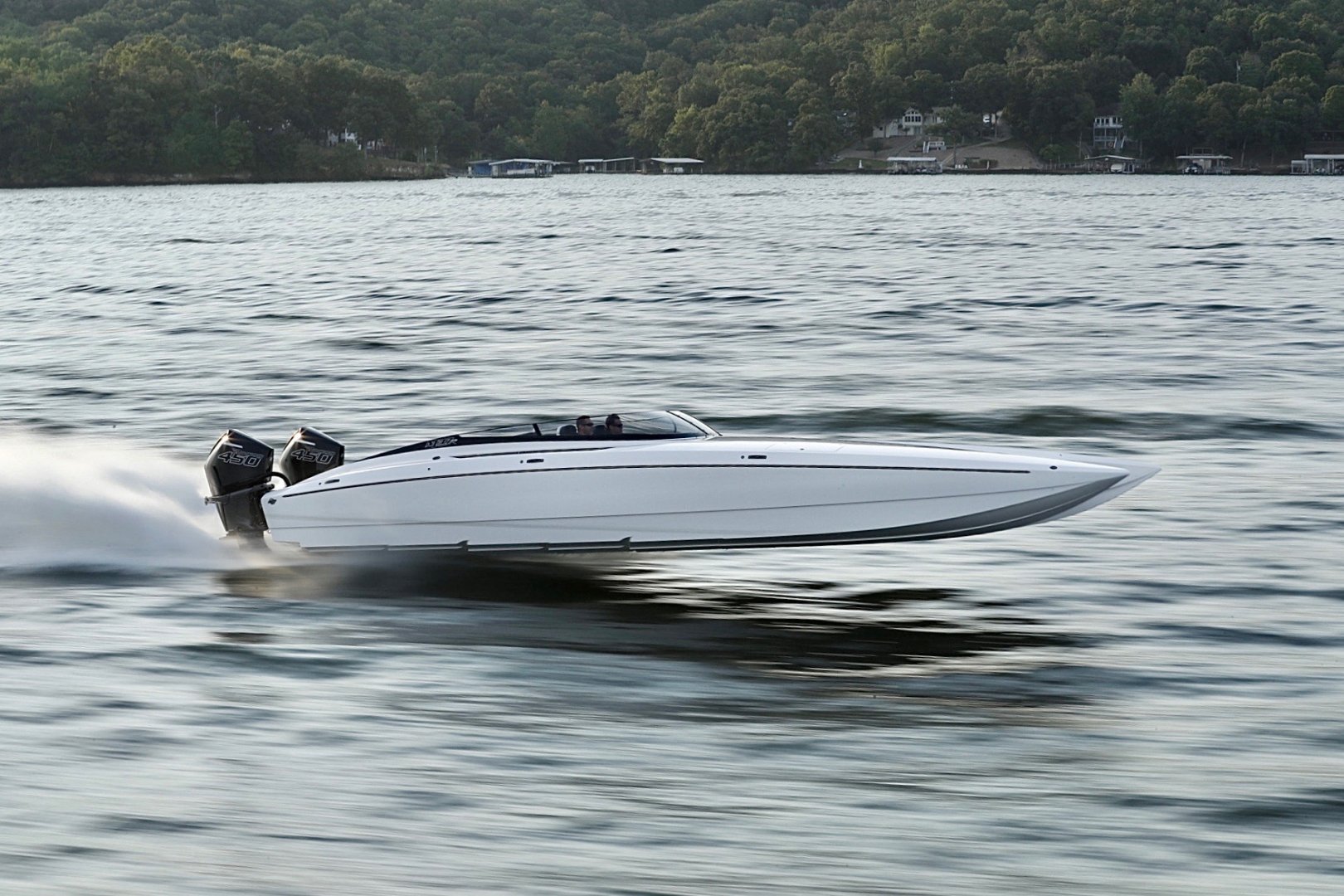 The M37R is one of the things that came on scene and virtually EVERYONE is talking about it. I was at a gas station last week and I ran into a long time industry friend and the first words out of his mouth weren't "How are you doing?" or "What have you been up too?" It was "Did you see that new M37? That thing is a god damn Game Changer!!" To be clear this was before it arrived at LOTO and before we had any "real" pics of it. 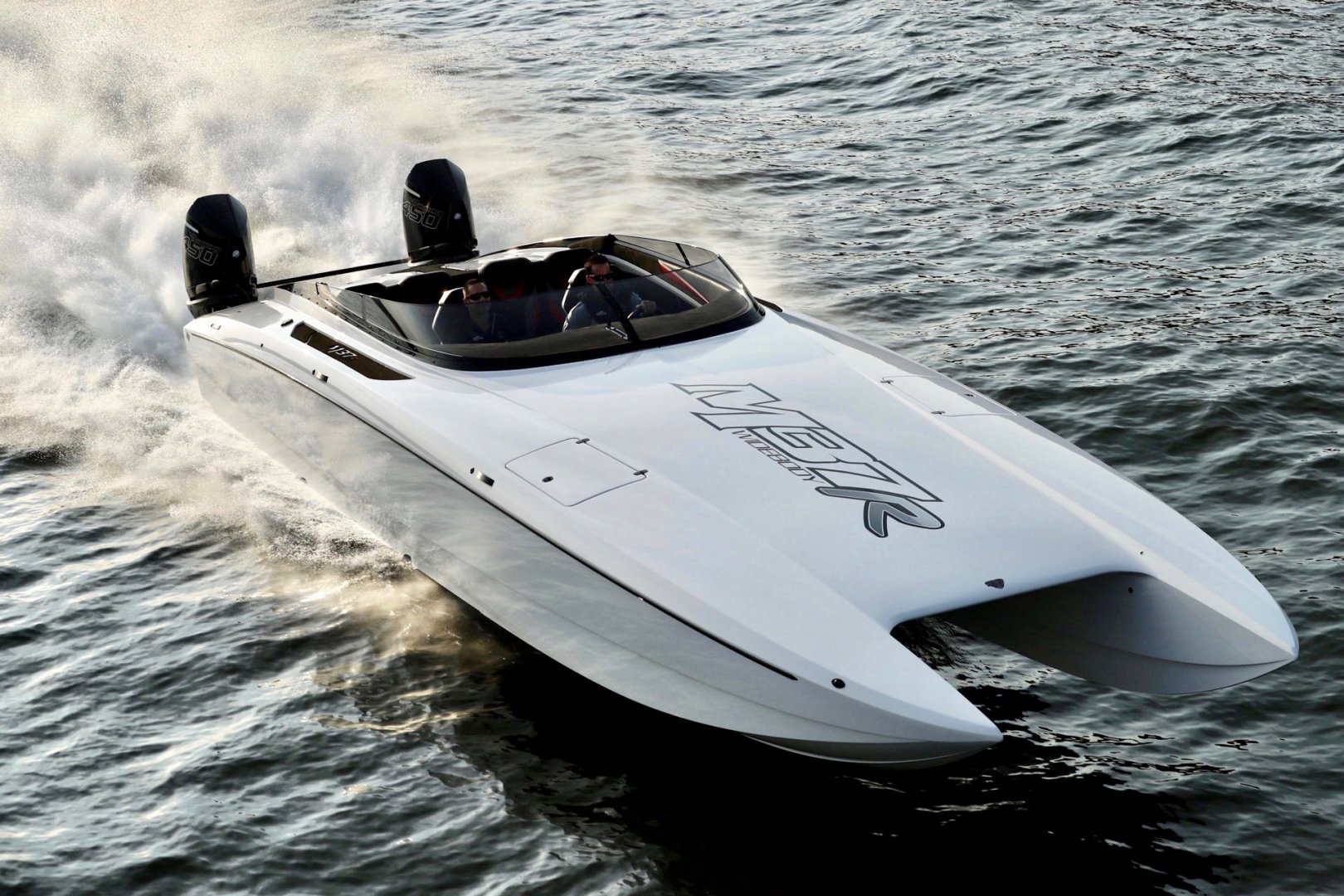 To say this thing made an impression at LOTO is about like saying a stick of dynamite went off in Beirut a couple weeks ago. The reaction wasn't explosive it was borderline nuclear. From the time that thing hit the road there was multiple sitings across states on the way there, and yes when it hit the water early in the morning there was even spy shots being posted on here and in social media. No matter where it went everyone was excited to lay eyes on it for the first time, and every single person came away with a jaw dropping "whoa" take. 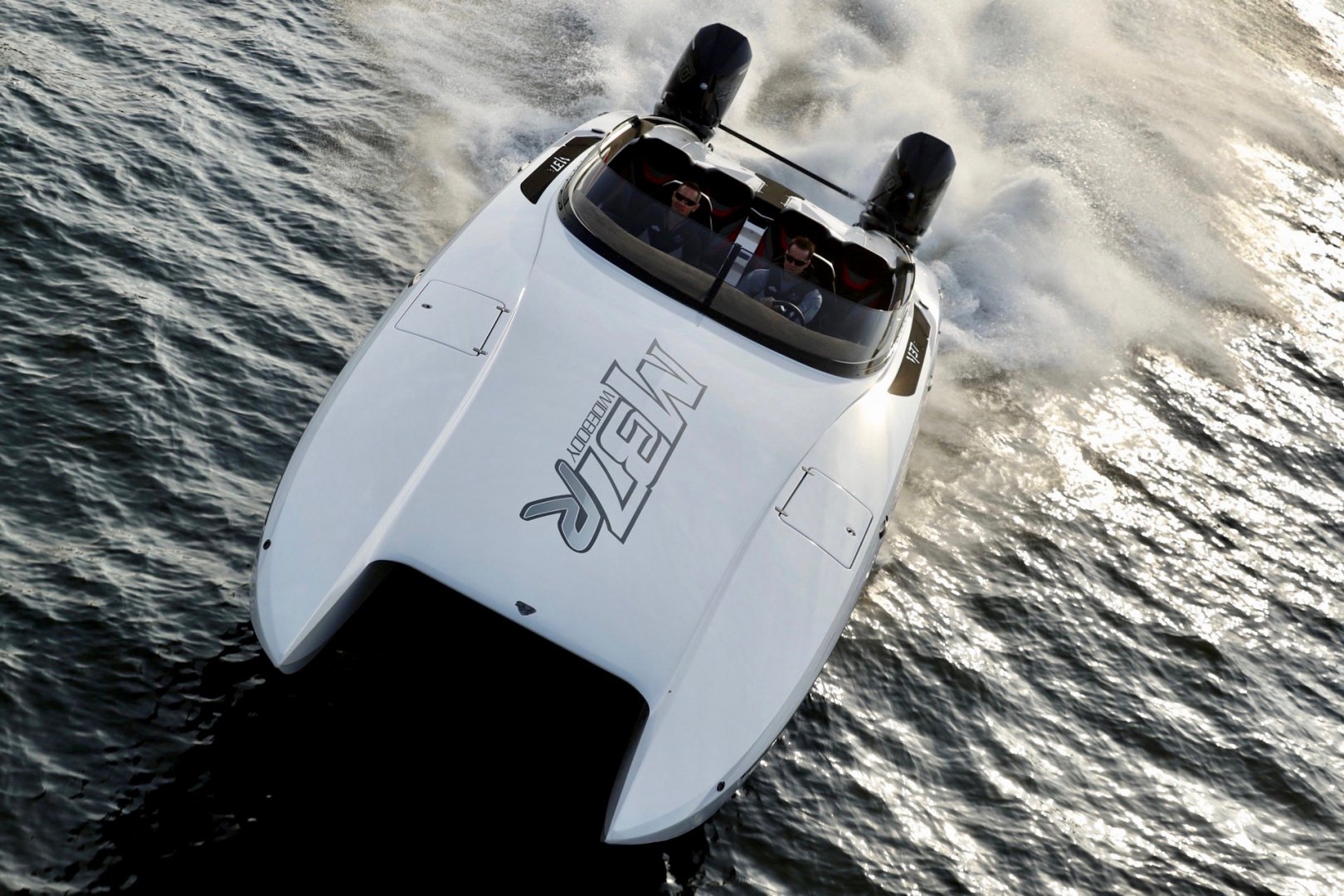 Wow is what you say when it's impressive, "Whoa" is what you say when it knocks ya on your heels, which is exactly what this boat does to every single person that sees it for the first time. It's sexy no doubt, but there's a lot of twin outboard cats that are sexy. Hell it could be argued that all of them are sexy it is just to what degree. So it isn't just that, that blows everyones hair back. It's something different, something else, and new.. 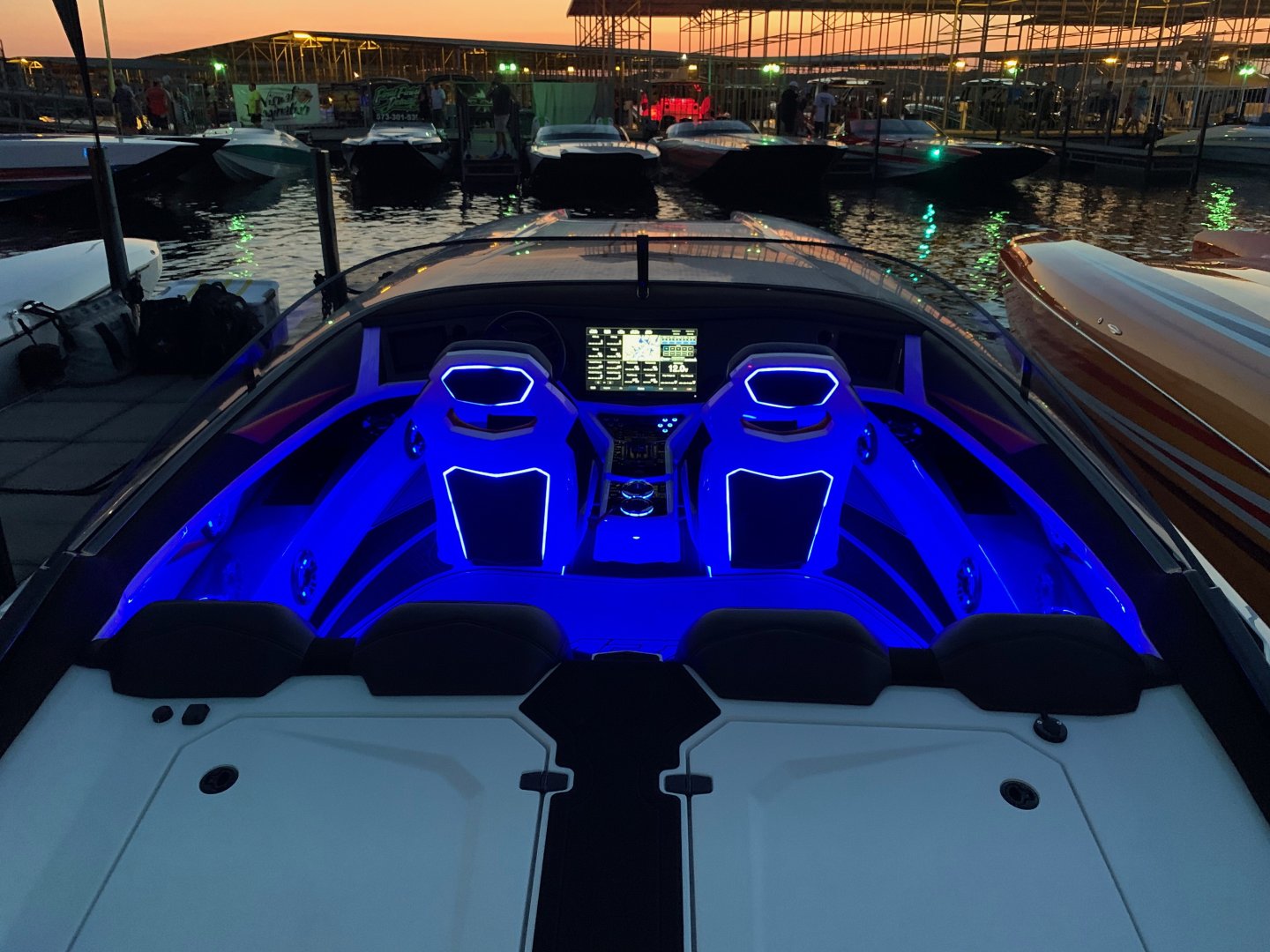 There it is right there.. If you haven't see this boat before it just happened to you. The boat had the look of the exotic, you already loved it! But now? You just went from playing asteroids on your Atari to playing Super Mario Bros on the new Nintendo. 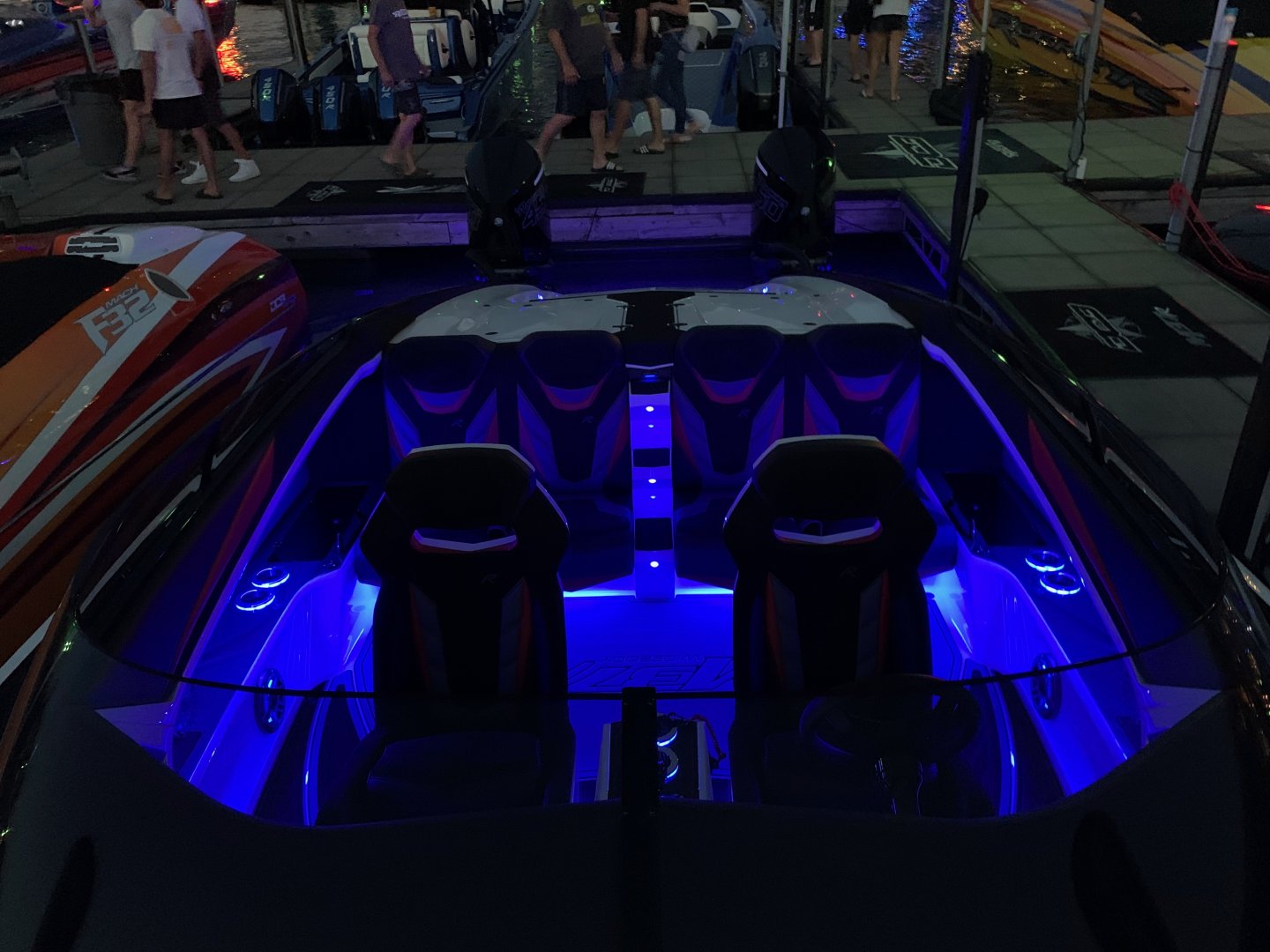 The blackberry you thought was the cats pajamas five minutes ago just met Steve Jobs' little invention the I Phone and your world will never be the same because of it. Everything you see from here forward is going to be judged off this benchmark and whether it measures up to it or not. 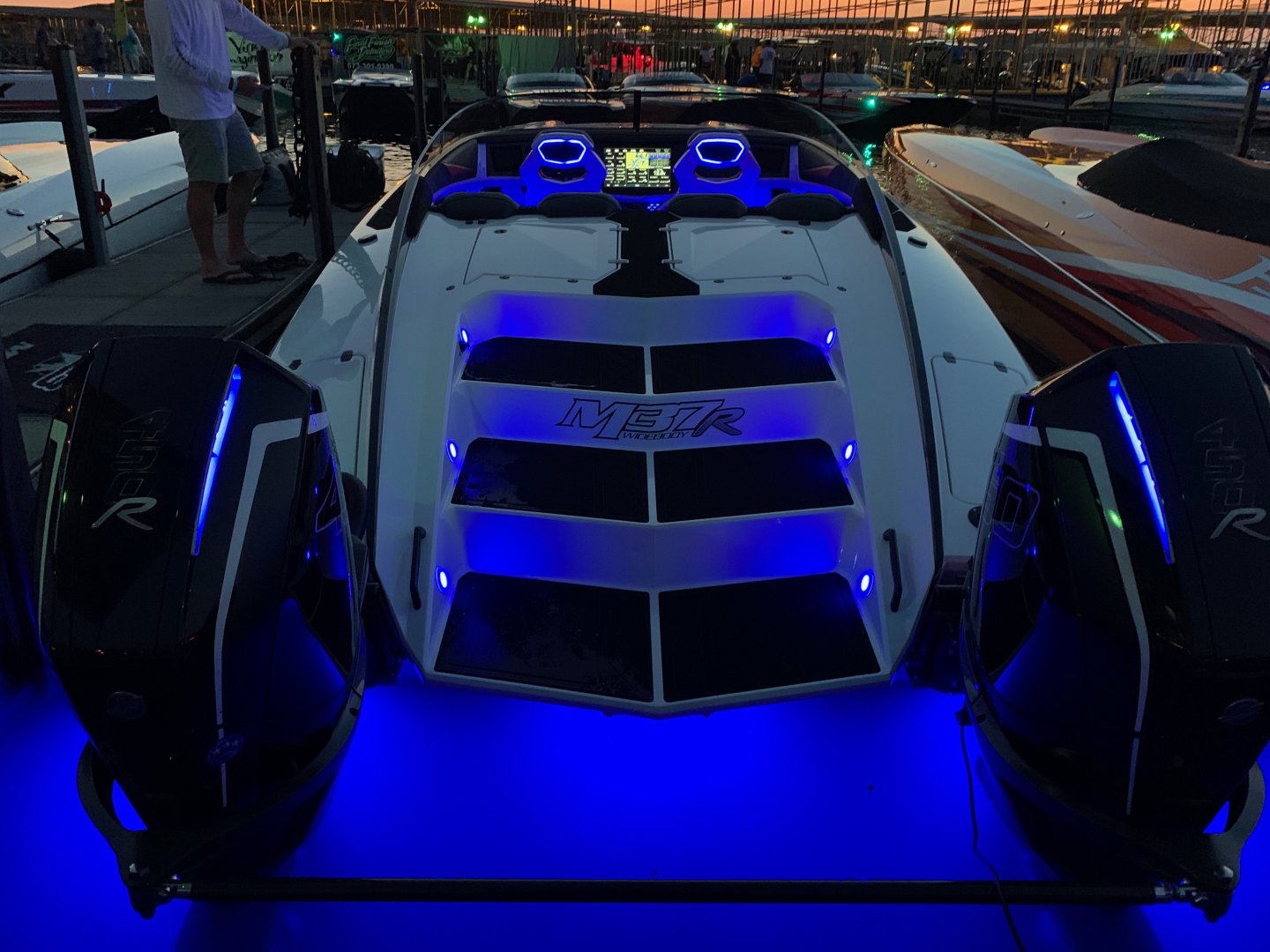 Lets be honest we have all seen top of the line boats, but have you ever looked at one and thought it resembled a "Maybach?"

DCB has always been known for their attention to detail, and especially their interiors. They have always not only been at the top of the game with regard to styling and interior, but often blazed the trail and set the bar that everyone else had to try and keep up with. It's always interesting to ponder how they are going to out do themselves on the next model. They kept the interior of this beast under wraps for good reason. 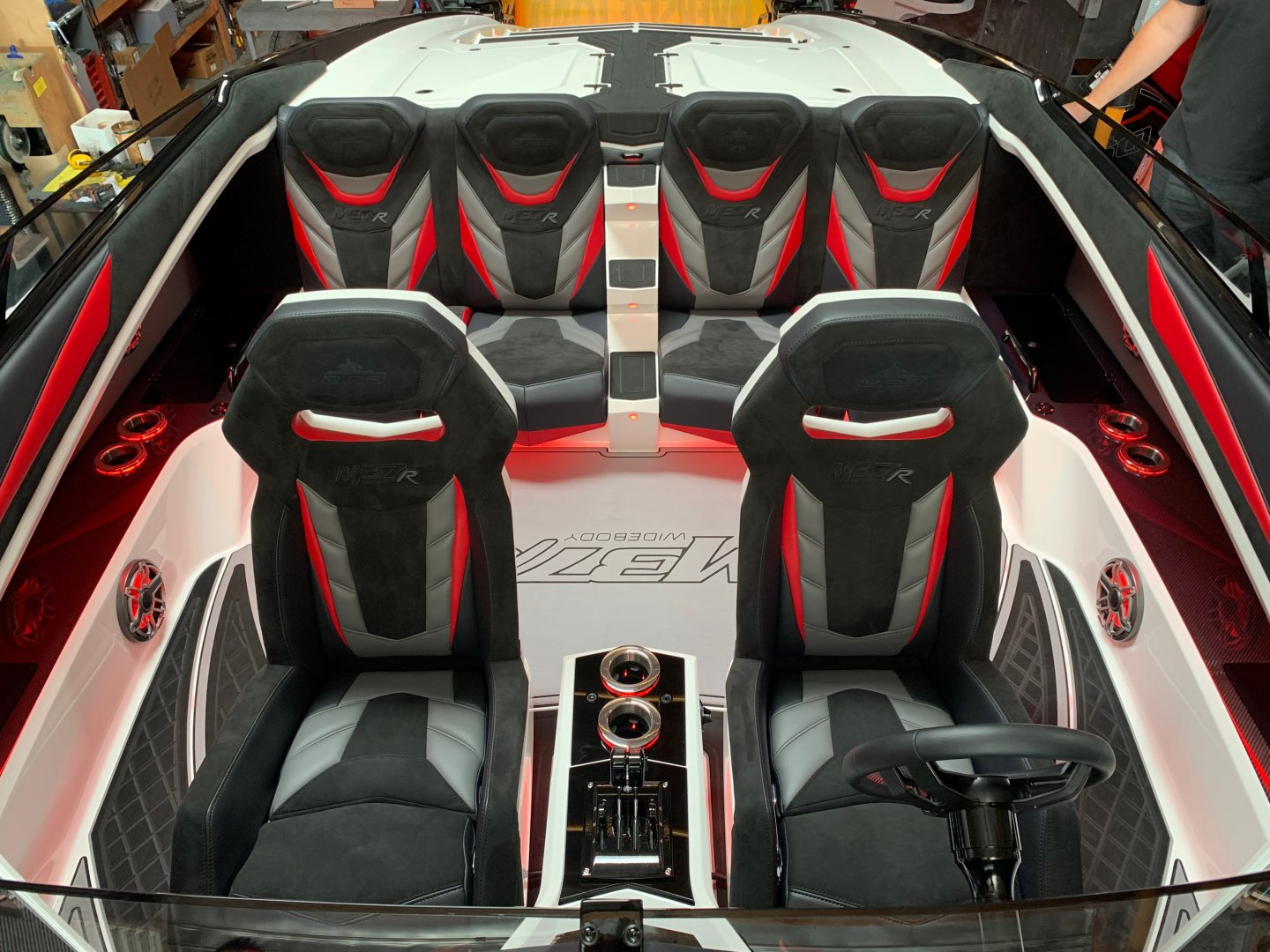 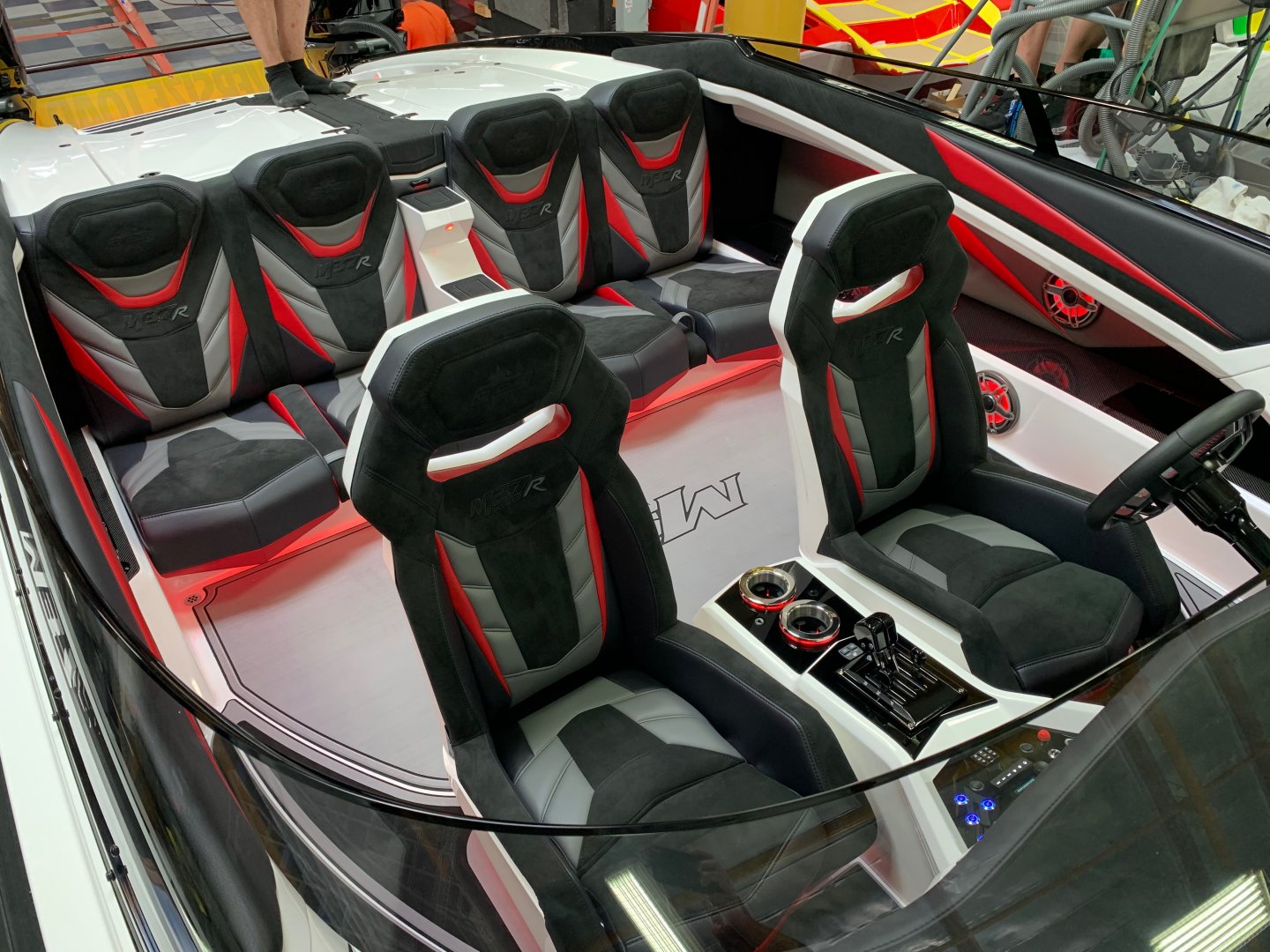 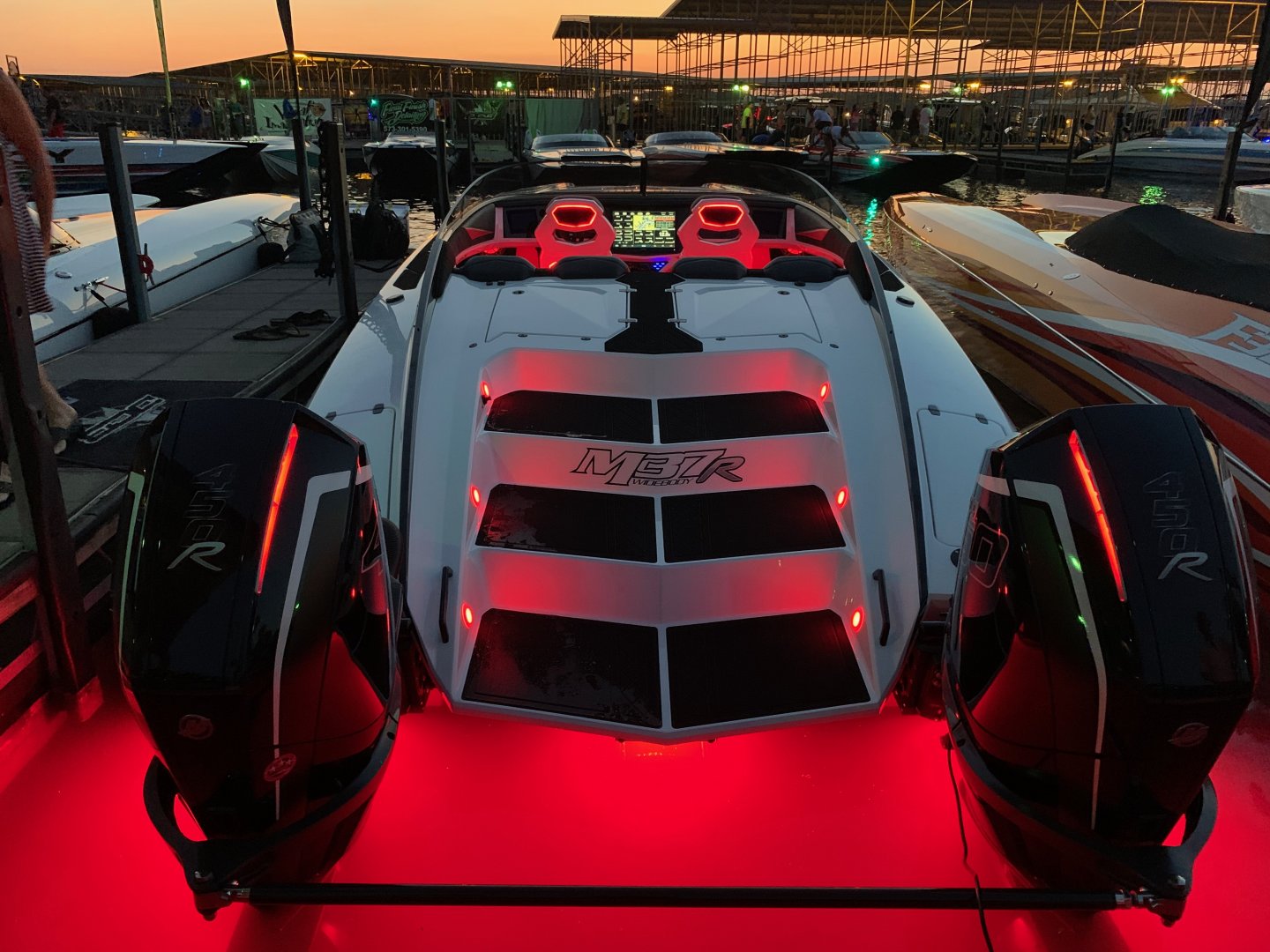 They wanted it's debut to be nothing short of a "Shock and Awe" campaign. It's one thing to walk in the front door of the dance with a pretty girl, it's an entirely different thing to walk into the ball with Anna Nichole Smith on your arm. It's such an impression that it's something that people will be talking about in the future.. Not just the boat, but about that time something so far ahead of the rest of the pack was released that everyone has to stop and take a breath and figure out what they are going to have to do about it.

This is similar to when BMW went from the E30 body style to the E36, or dare I even mention when DCB itself way back when went from it's F series to the M. It's completely out of the class of any of their other models. Which in my not so humble opinion brings up the fact the boat was likely monikered incorrectly. For myself I think I woulda spun this off into a "T" or "TT" series for Tunnel or True Tunnel. That's neither here nor there though, and entirely up to the crew down in San Diego. 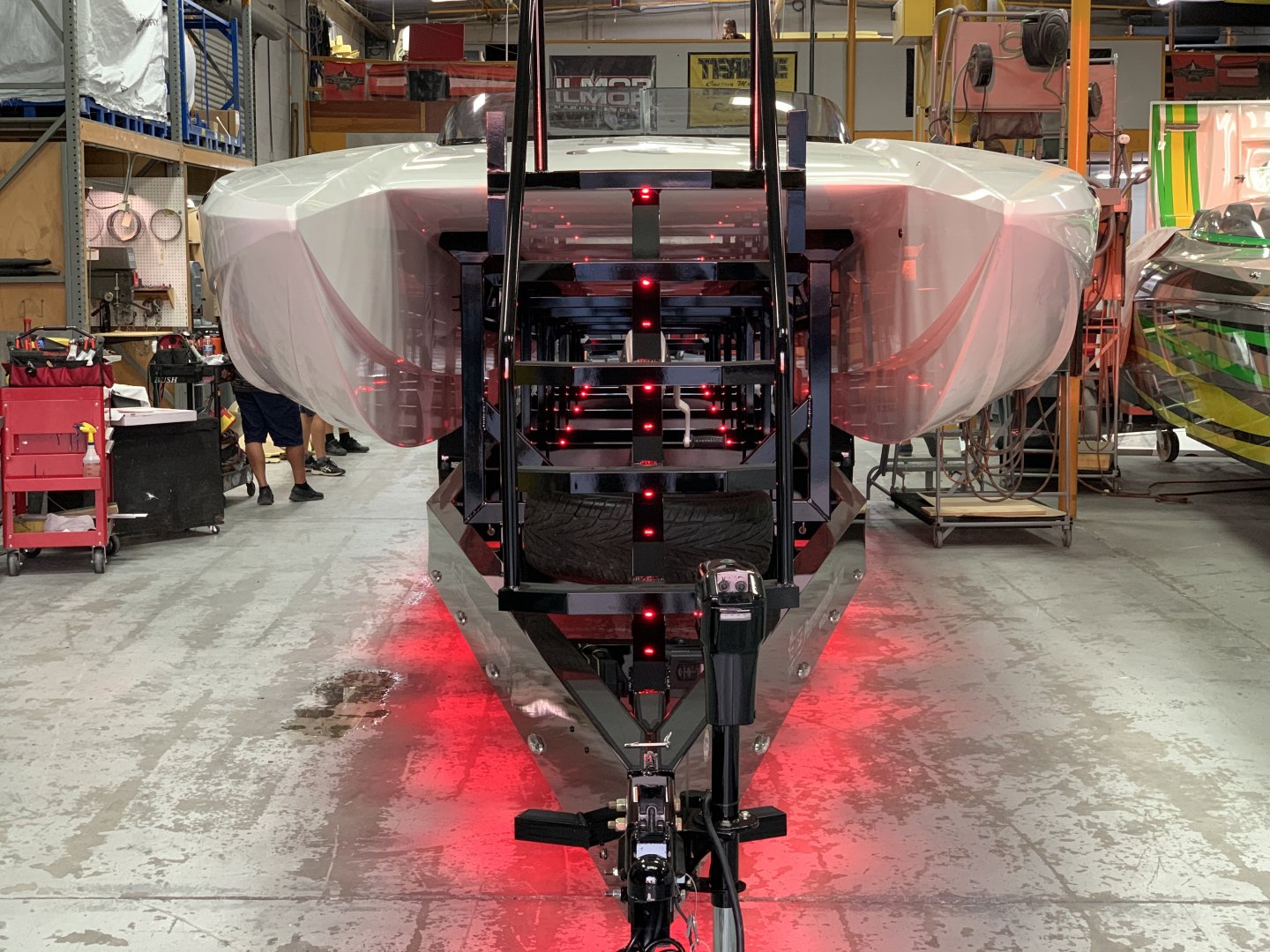 Enough about the aesthetics though right? Lets get to some meat and potatoes of does it actually work?

128 mph right off the trailer guys.. First time out with a decent load the boat was pulling 124 mph consistently with people on board. As the first day of testing wore on and they burned some of the fuel out of the boat Tony pulled 128. That is with less than 40 minutes of seat time, and only trying one set of props. Tony being the ever humble person he is won't say what he "thinks" is left in it, but from many years of covering these types of things, there is little doubt in my mind that DCB will find 2 mph in a set of props sooner or later, I actually think they'll find more than two. 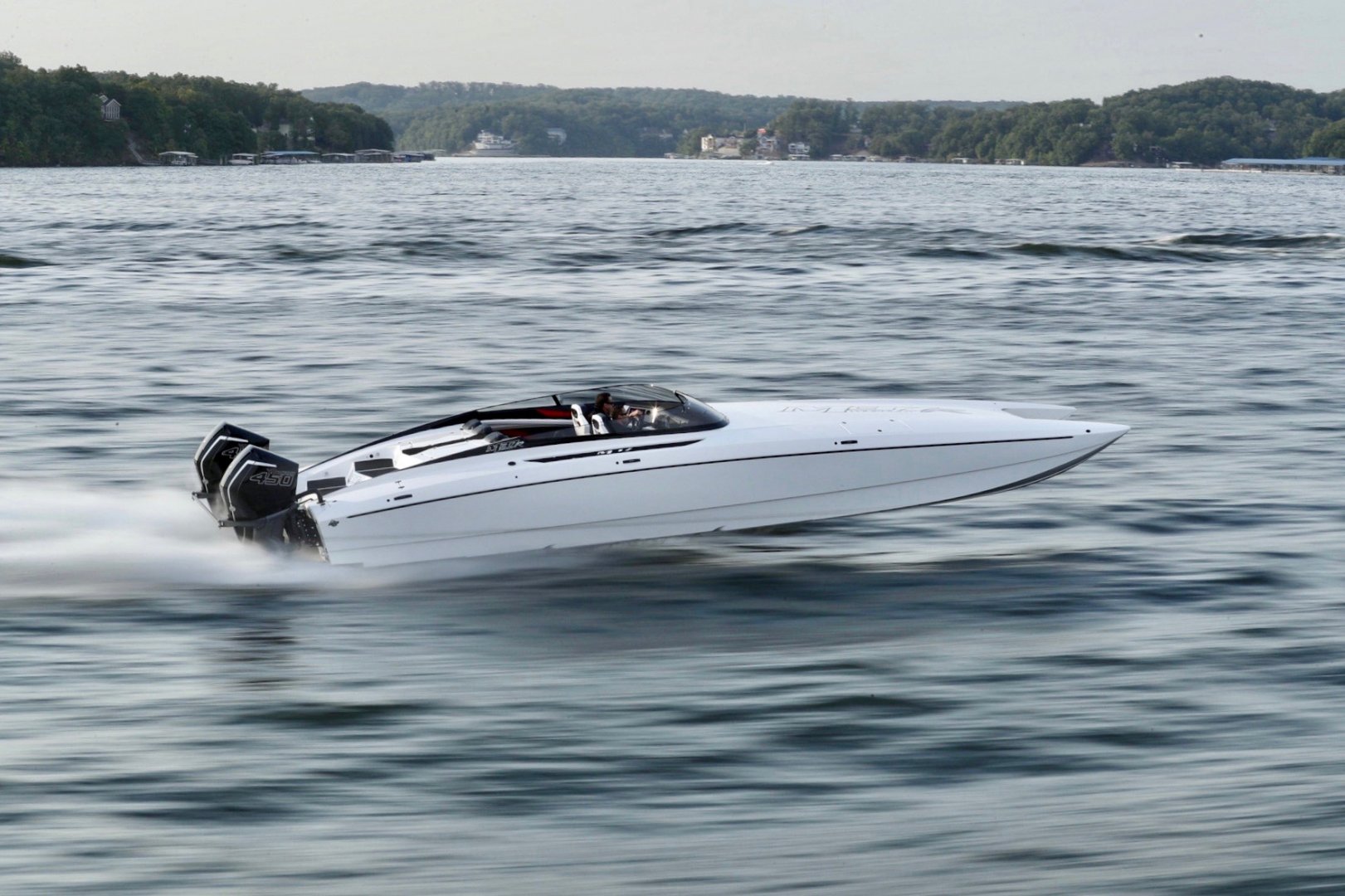 When the boat was tooled they were originally thinking anything in the high teens would be a winner, and anything in the 120's would be over the top. Even they didn't know they'd be chasing the 130 mark, until they almost hit it on the first day. Tony is beside himself happy with regard to the numbers and the way the boat not only runs at wide open, but all throughout the speeds. When I asked him how it turns, he joked with me and said "Dave the 33 is the hardest turning model in our fleet... If you think that thing turns hard hold on to your seat, because this thing is a slot car." 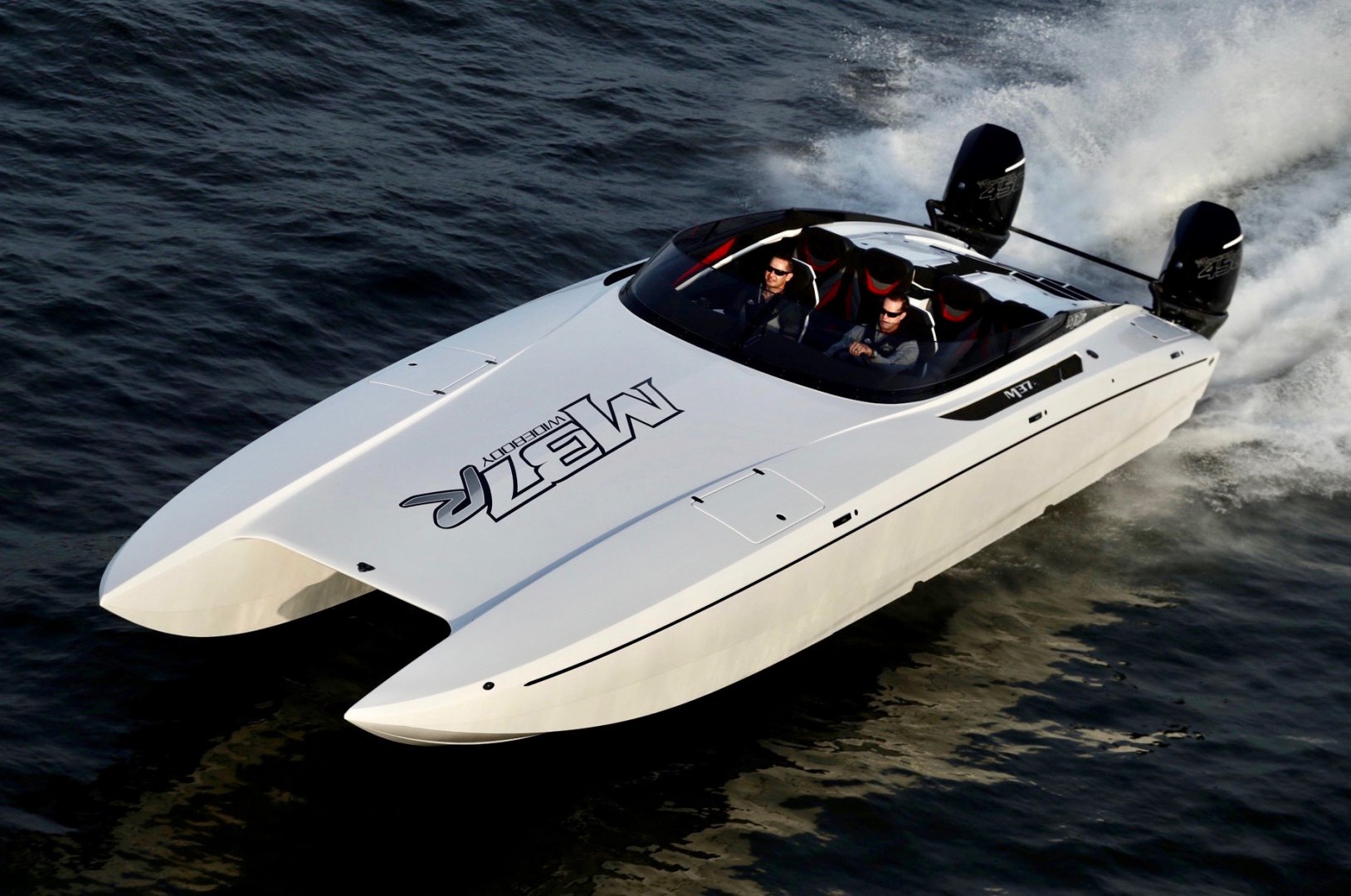 The boat is now back from LOTO and having a few items dialed in for the new owners Kris and Shelby Hansen (long time family friends of mine). The boat should be heading out here to Lake Havasu Friday Evening and I look forward to running it at some point this weekend and putting up a full review with video (so we don't have to speculate) at some point in the very near future! 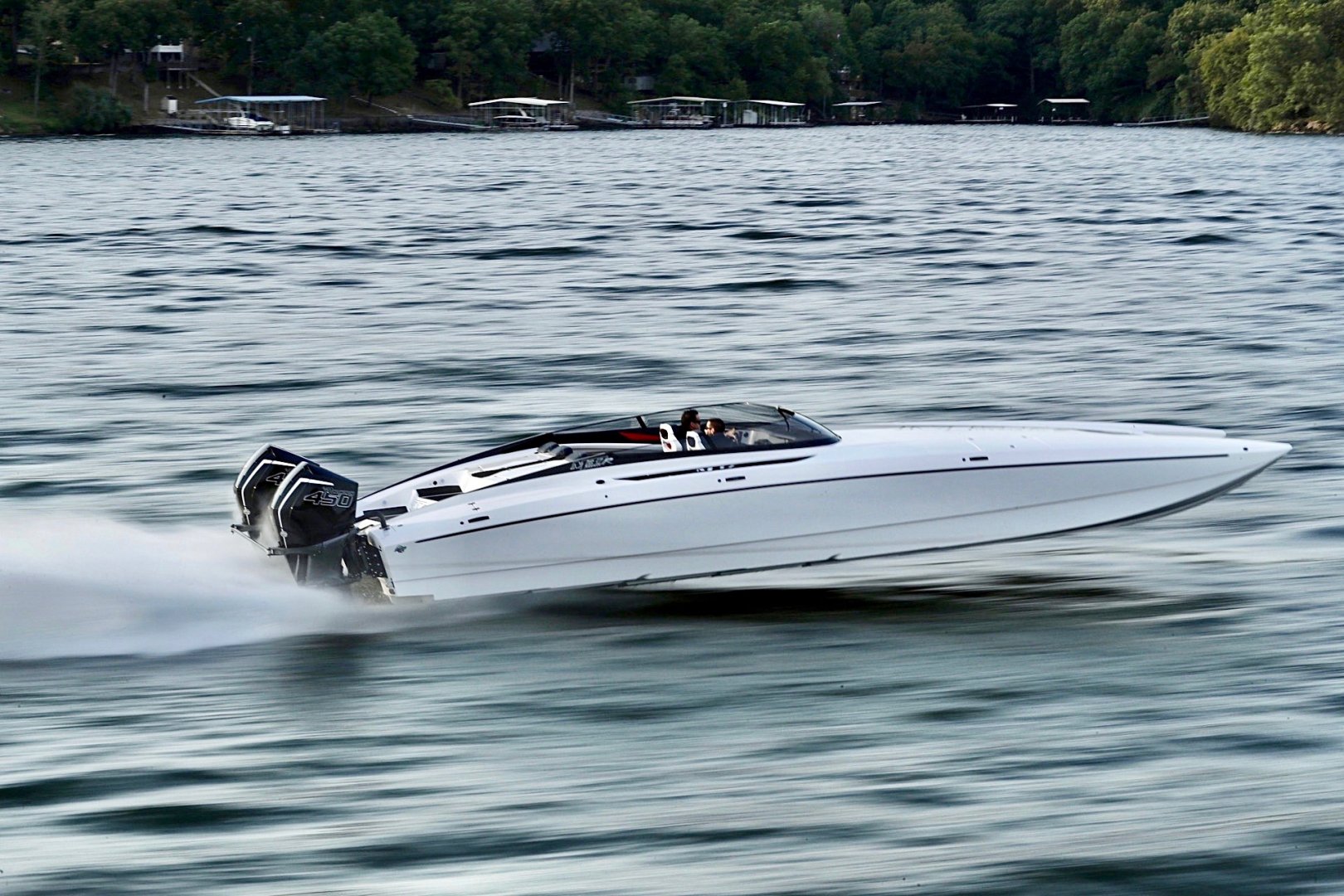