Story and photos by DinaRella / Aerials by PowerboatP1(Ronny McHenry) and Freezeframevideo.net
​
River Dave said YES when I pleaded with him to let me cover the premier race of the revolutionary union of the Offshore Powerboat Association (OPA) headed-up by Ed "Smitty" Smith and Powerboat P1 guided by Azam Rangoonwala. I was overcome by a feeling of victory since I know our West Coast forum members are not always animated or interested in getting the rundown on racing along the East Coast... I hope to change your (and his) mind! 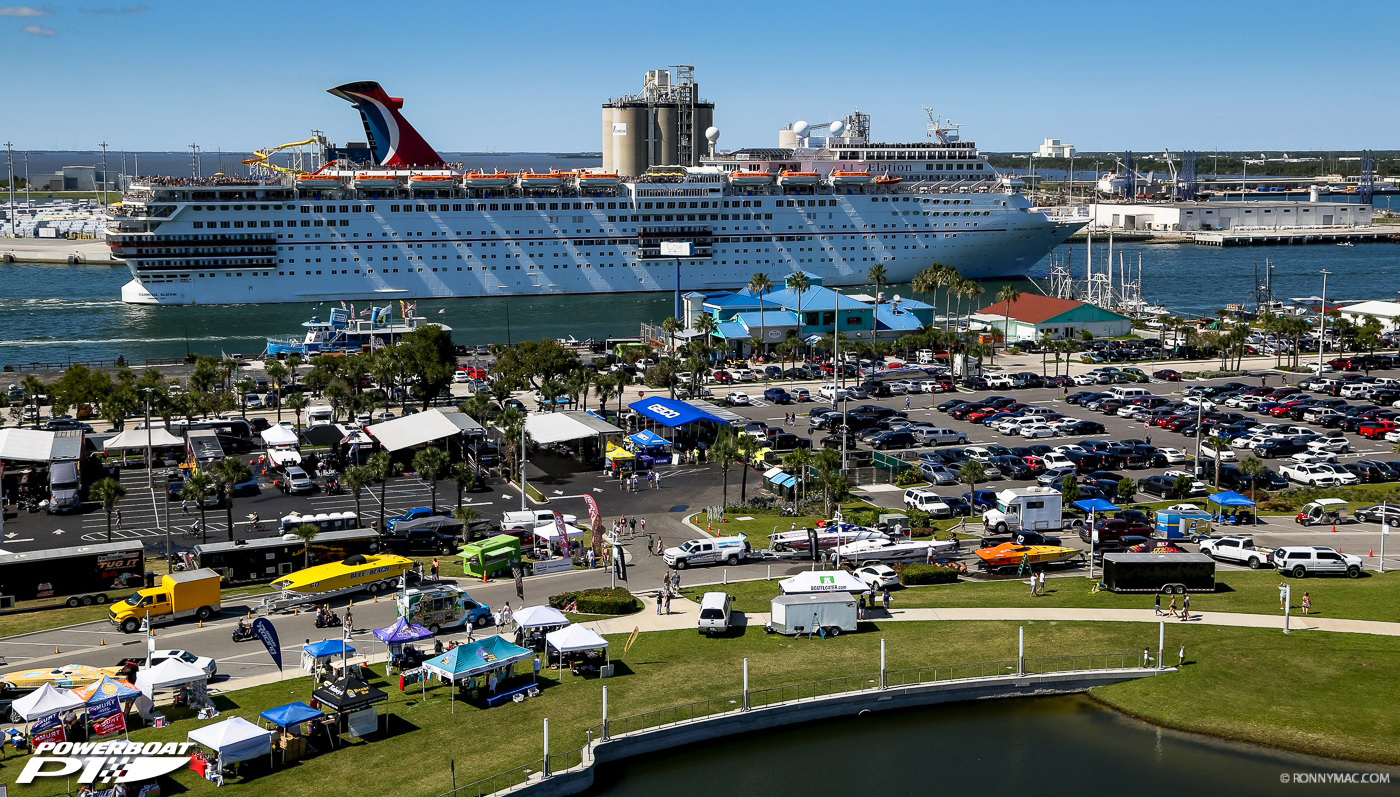 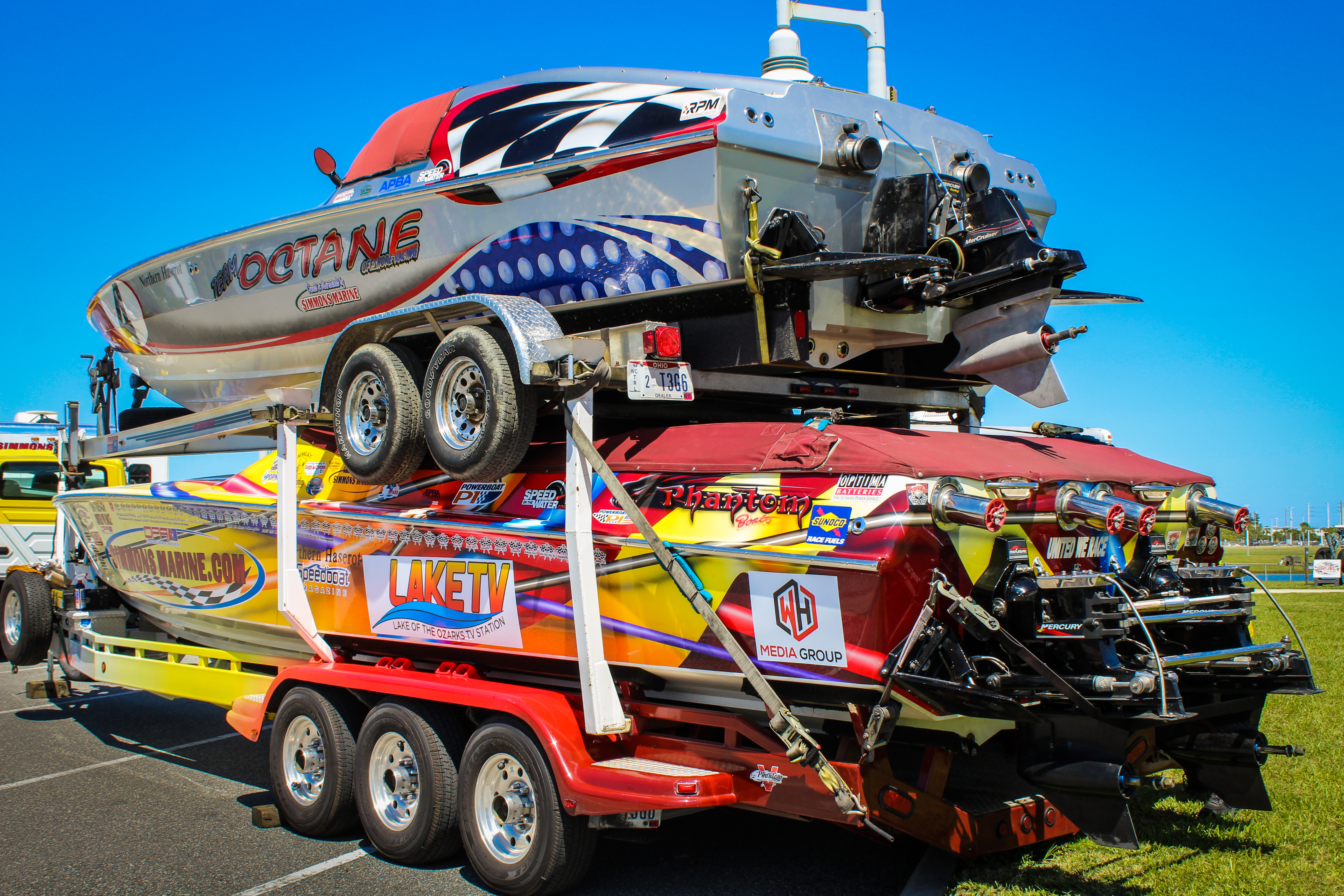 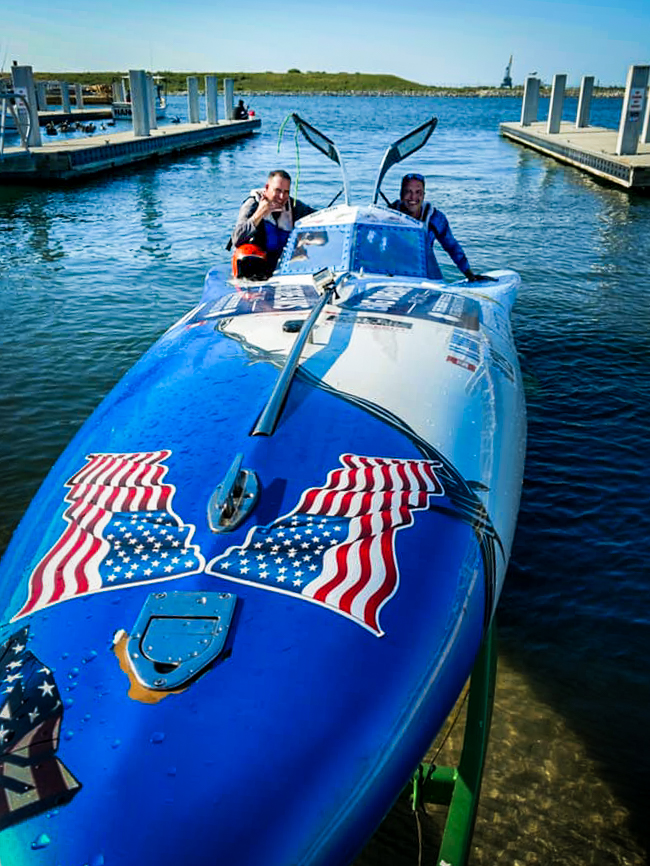 The coming together of the two outfits in 2019 to produce -- a six-race American Power Boat Association Championship Series with high-octane happenings around the country from St. Clair, Michigan, and Lake of the Ozarks down to Sarasota and Fort Myers, Florida, -- is nothing short of a miracle, due to offshore racing's never-ending uphill battles tackling subjects from sanctioning and sponsorship to egos and obstacles.


The mid-May kick-off fell on the tenth anniversary of the annual Thunder on Cocoa Beach Space Coast Grand Prix, formerly produced under the direction of Superboat International (SBI). Executive director Kerry Bartlett, who has been the local mastermind behind the Space Coast Grand Prix since its inception a decade back told me how blown away he was by this year's epic attendance. Boat registrations rocketed to over 64, up from the 23 arrivals the year prior. 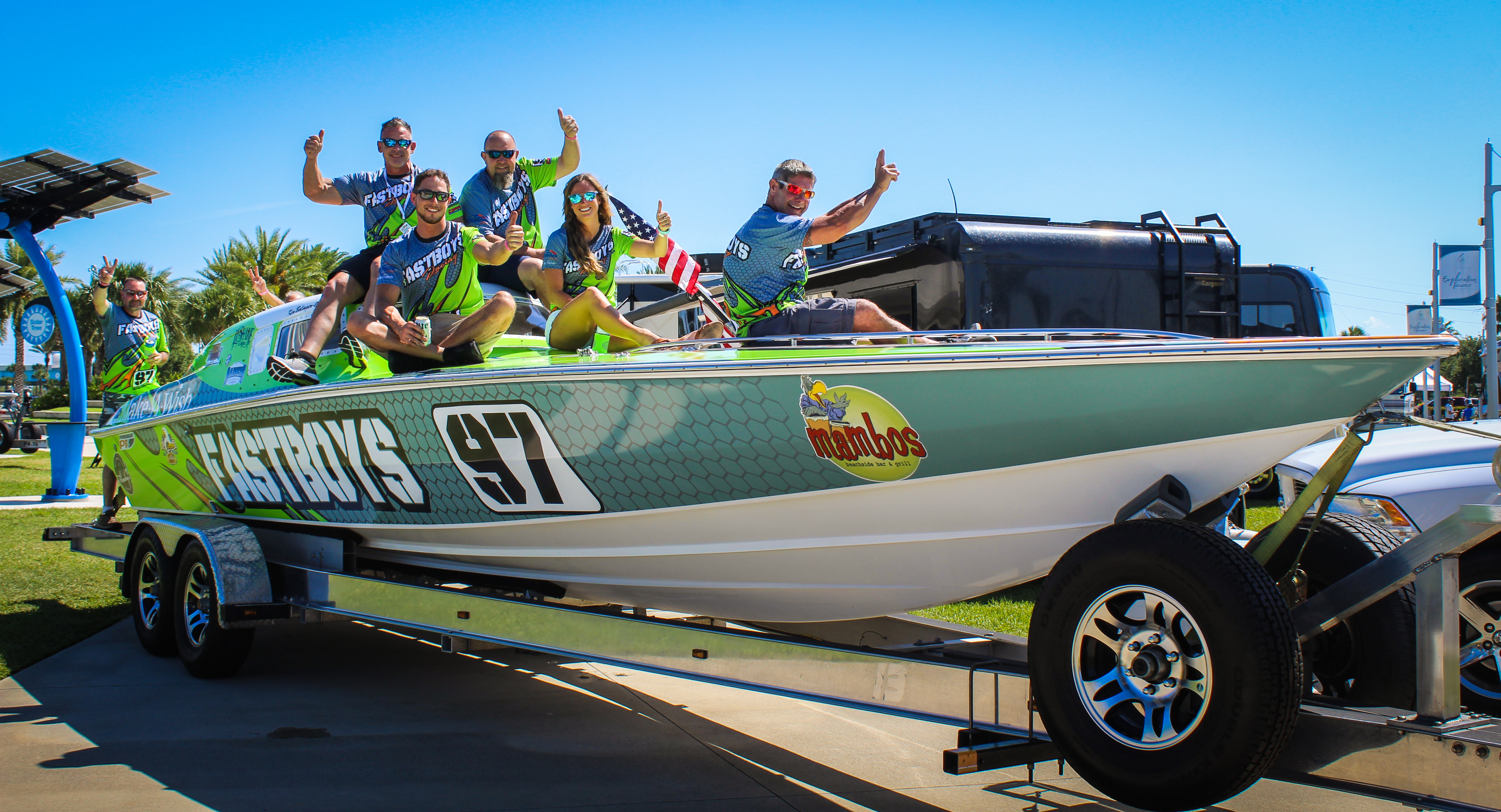 Record boat counts from the influx of new and international teams is good stuff... it's all about MBGA -- Make Boat(racing) Great Again, but what really had the Cocoa Beach crowd enthused were two highlights garnering more attention and rave reviews than the season eight forever-finale of HBO's Game of Thrones also on the calendar that weekend. 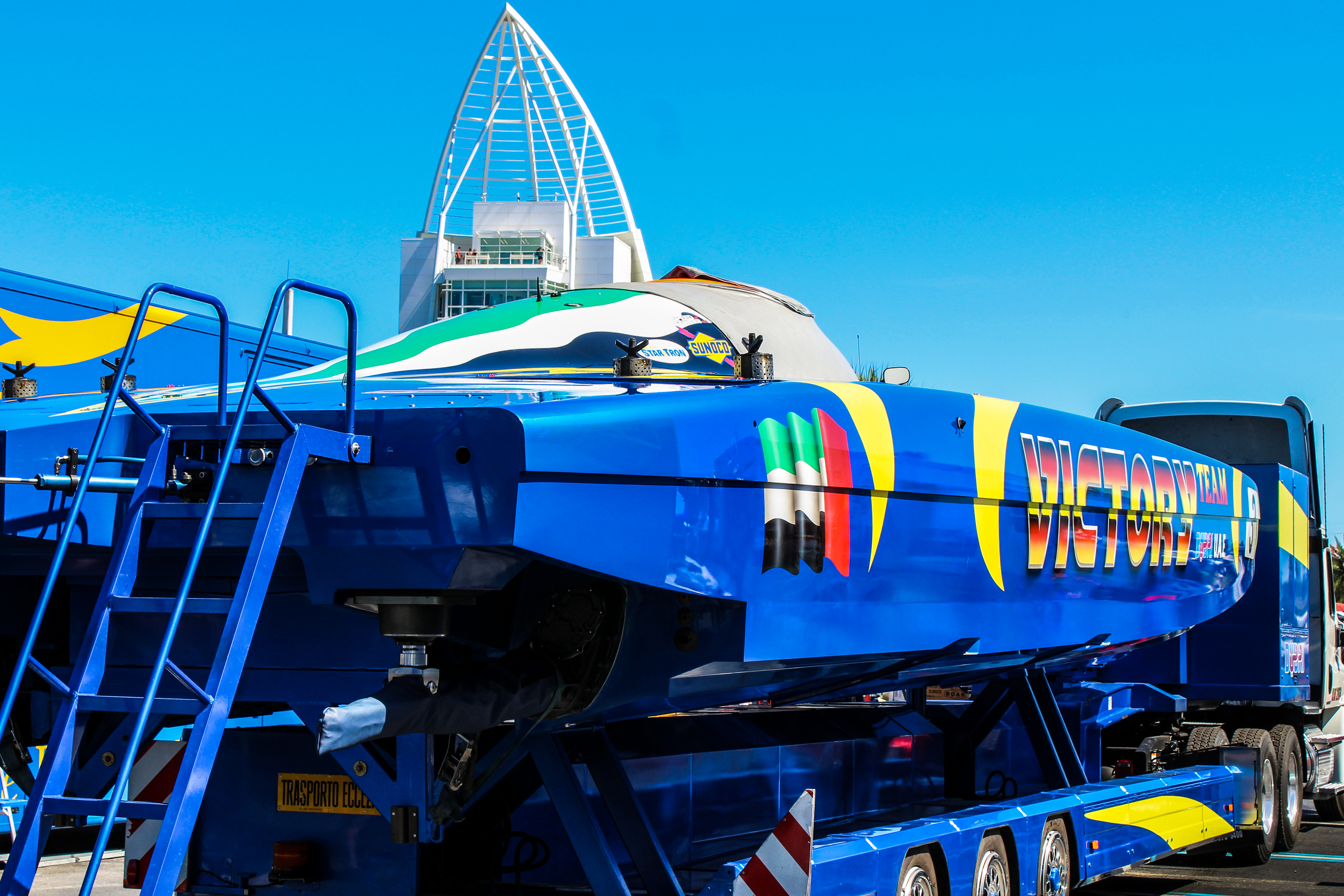 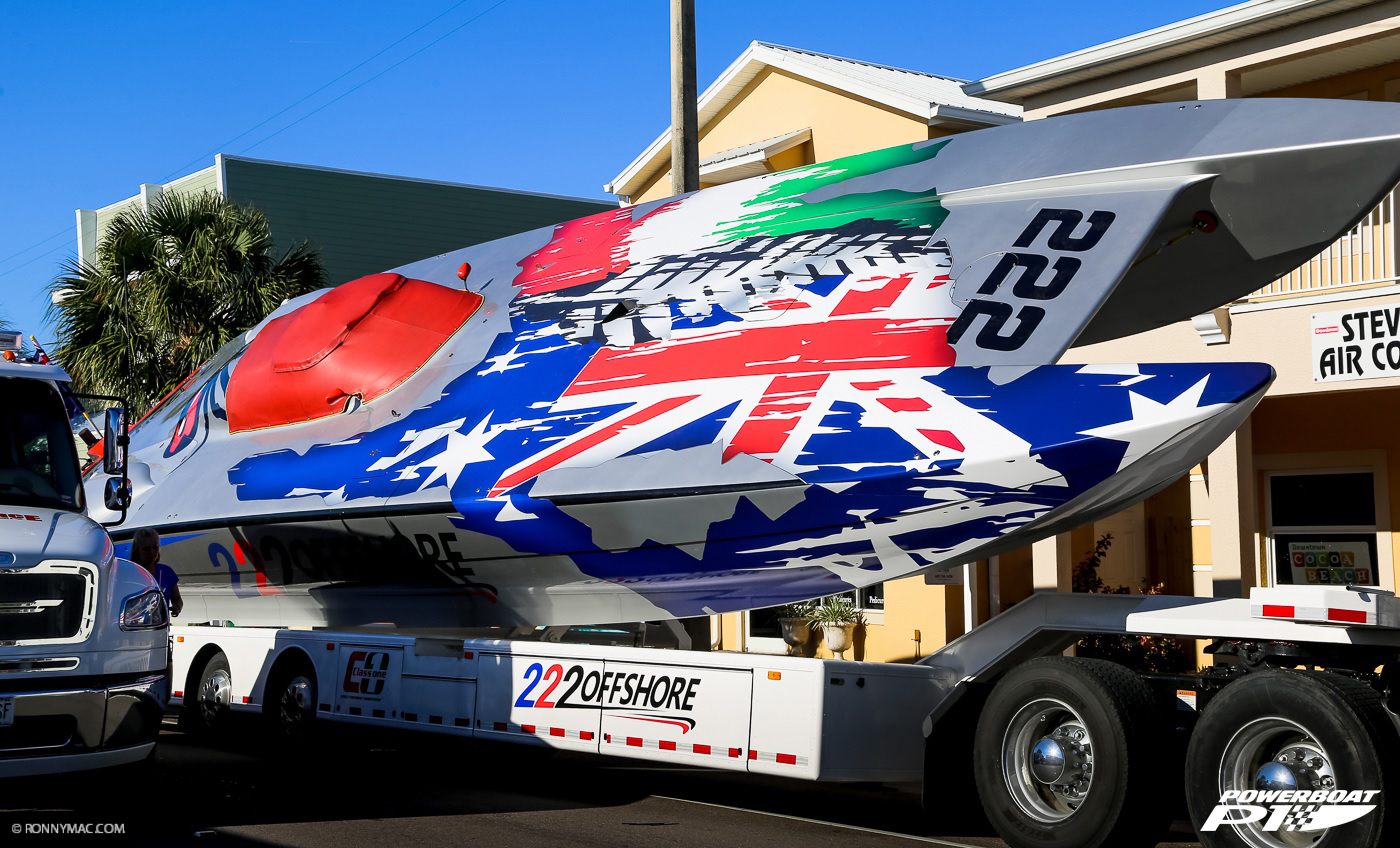 First off, Powerboat P1 took U.S. offshore to a new dimension with its live race broadcast on Facebook. Messages of gratitude from non-attendees and kudos to the racers flooded social media from friends, family and fans enthusiastically glued to their devices from Alabama across the world to Australia. 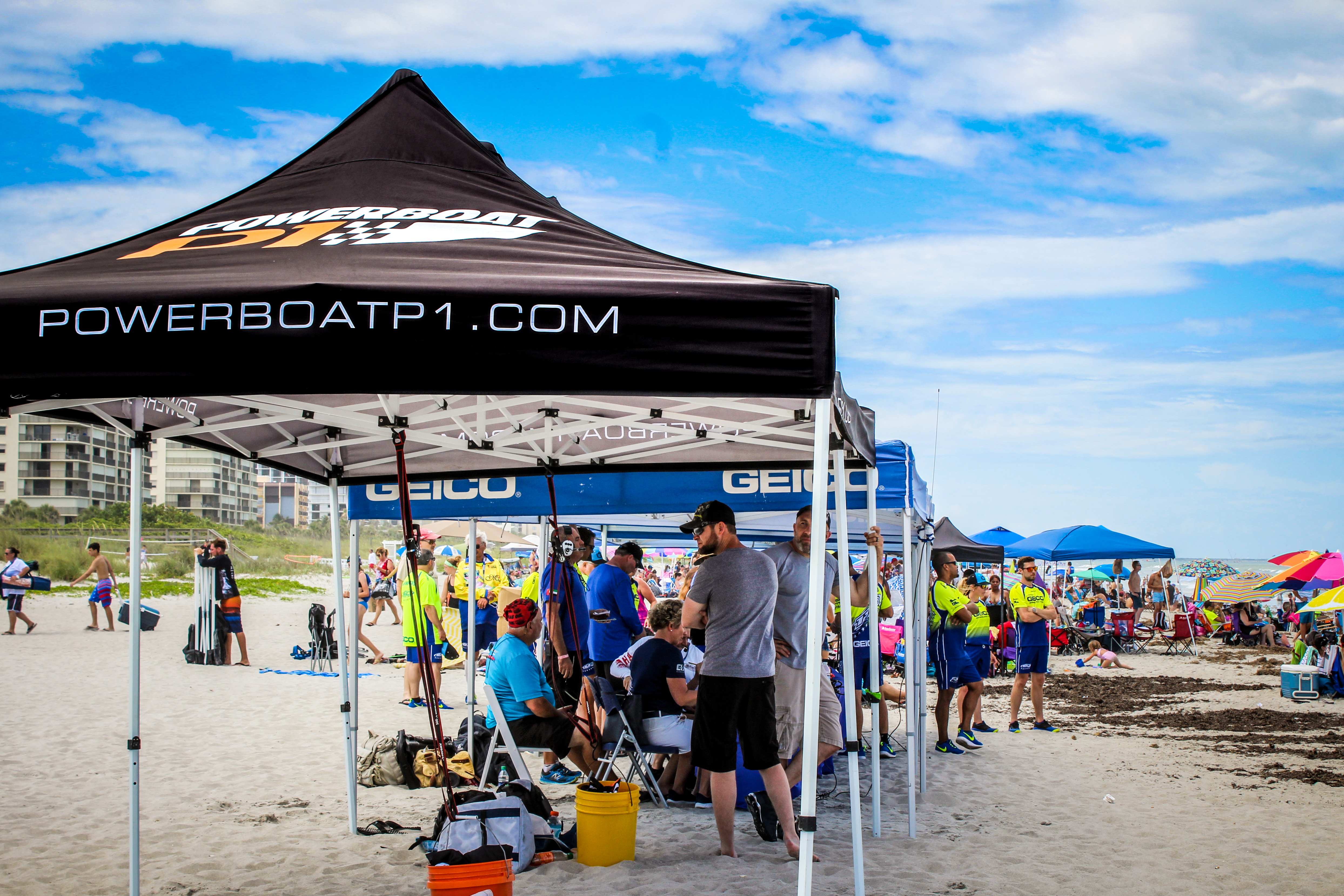 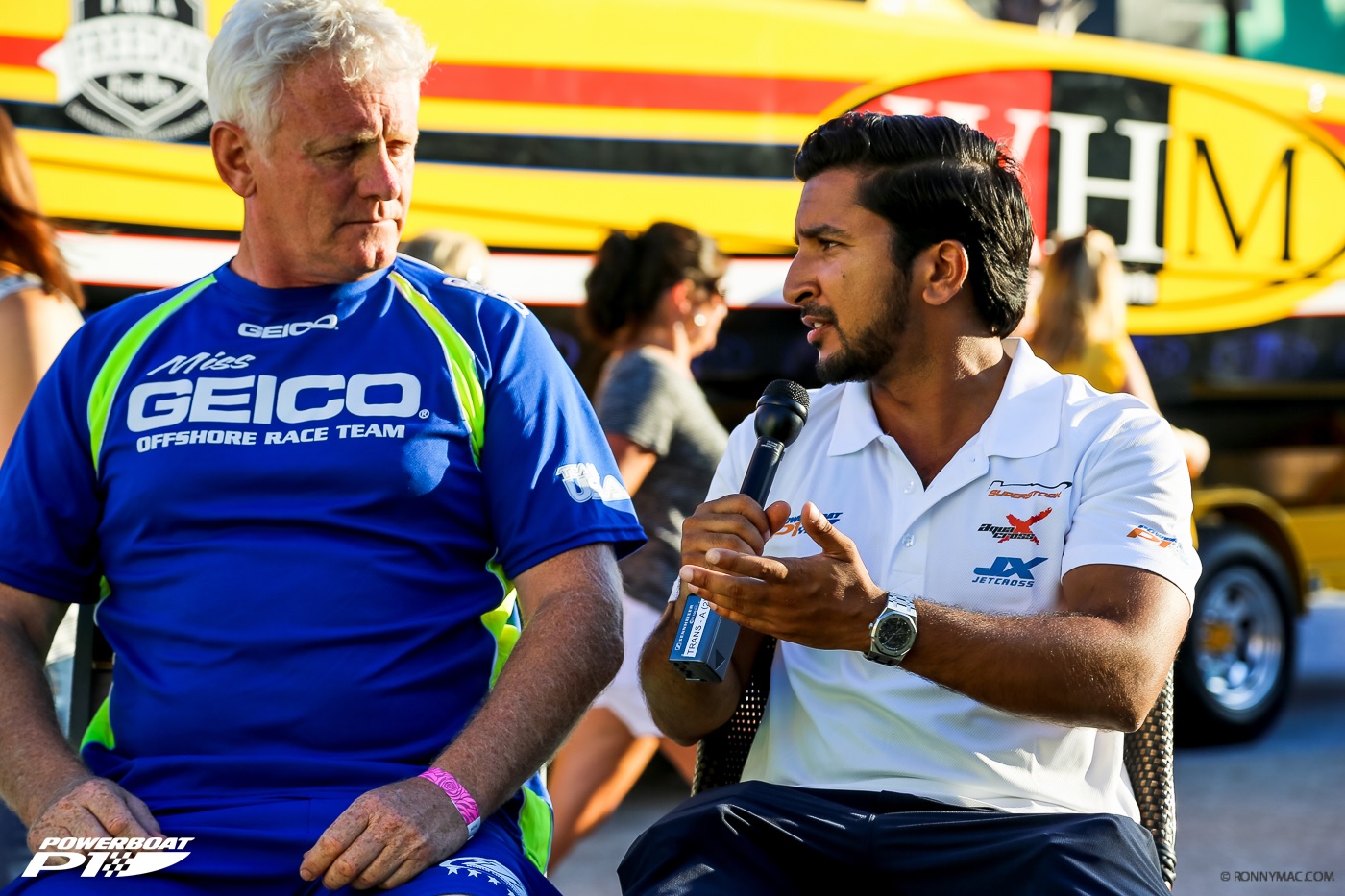 The second cause for commotion was Travis Pastrana -- the wizard on wheels and parachute-less airplane jumper was making his rookie racing debut. His old school pal, Brit Lilly of LSB/Hurricane of Awesomeness sorted out a spot for Travis in the pilot seat of his recently revamped 40' Extreme class canopied Fountain.


Multiple motor misfortunes caused much unanticipated disappointment but were short lived (well maybe not the motor part) when Jorge Arellano of JRA Boat Sales saved the day by offering his second Phantom boat for Travis to race. Look for a separate Riverdavesplace.com feature on the Pastrana powerboat experience. 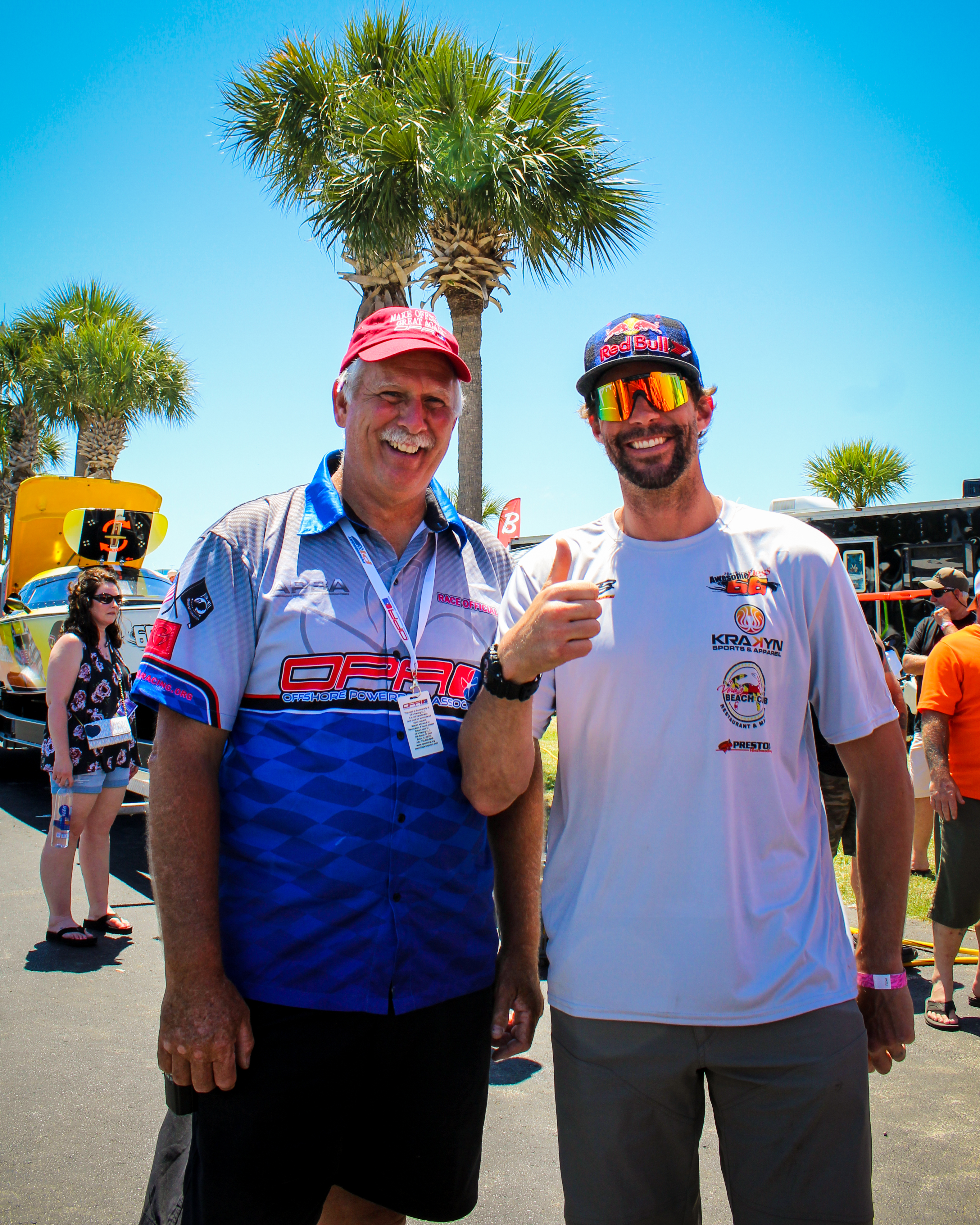 It was GAME-ON Sunday as sunny skies, light 7-mph winds and flat conditions blessed Cocoa Beach. In other words... it was a pristine day for the four-race format and the complete opposite of last year's wicked conditions that forced the race and the course to be shortened.


As always, discipline and throttle restraint played a deciding factor for first place honors in the opening battle which welcomed Fountains, Phantoms, Extremes and Reindl One Design winged bat boats to the speed-bracketed Production classes. Falling like dominos, attrition from the pounding down on the engines gradually forced teams to drop out one-by-one. 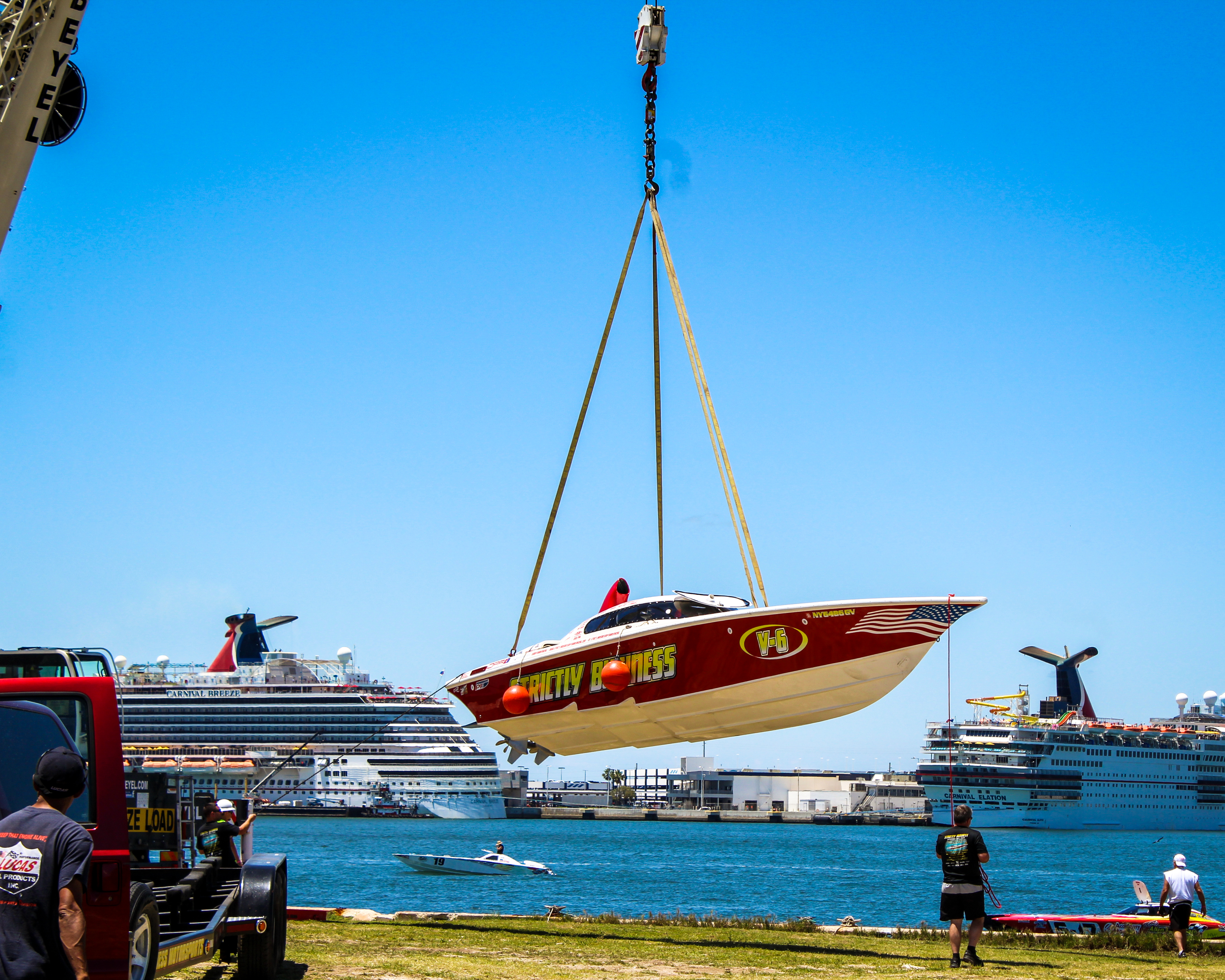 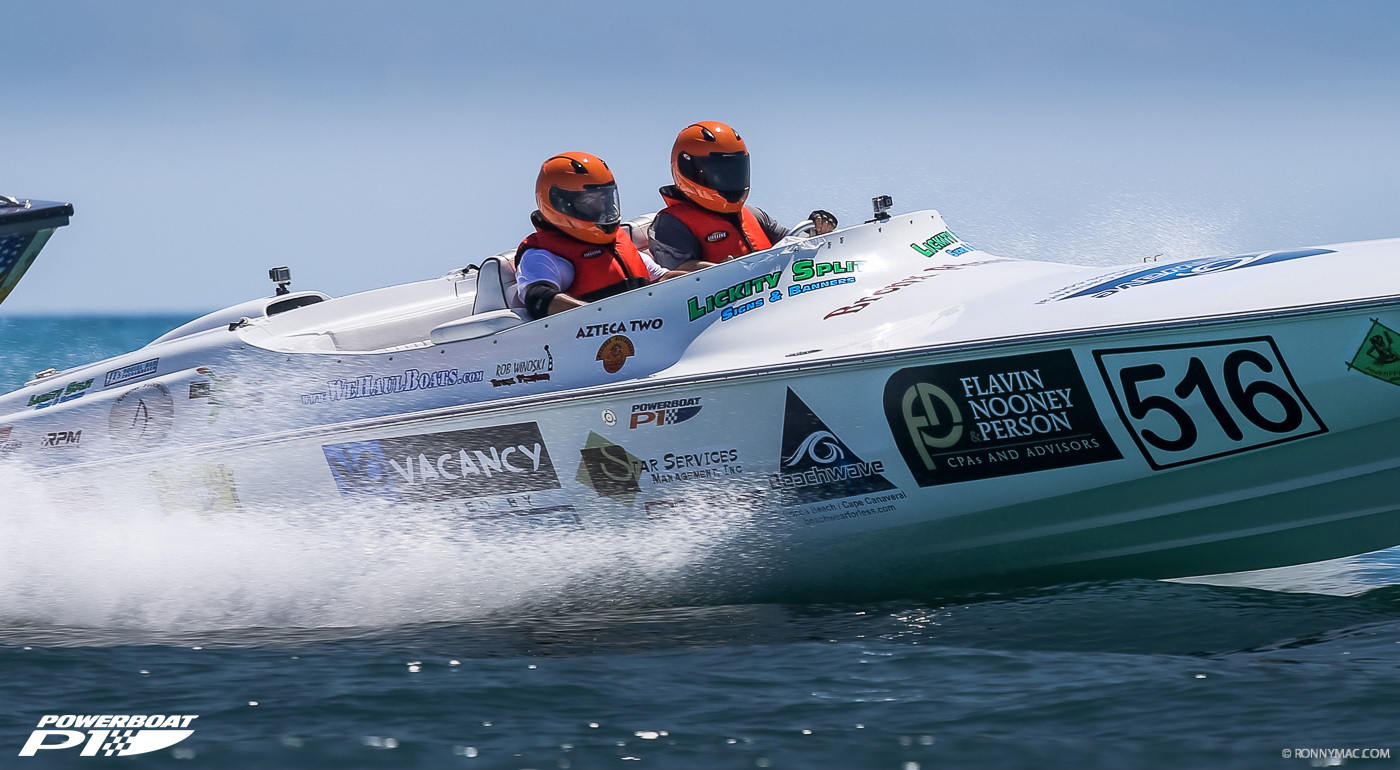 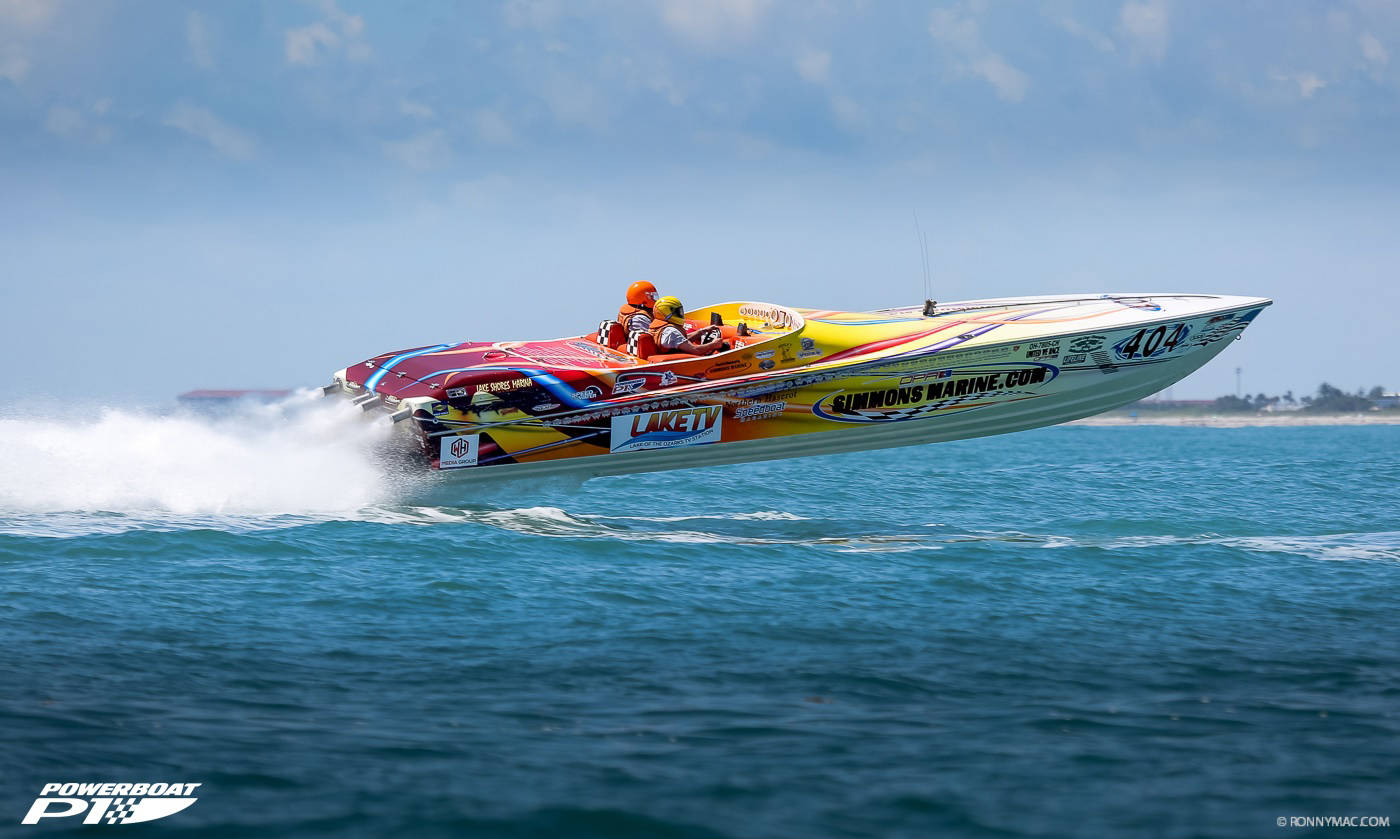 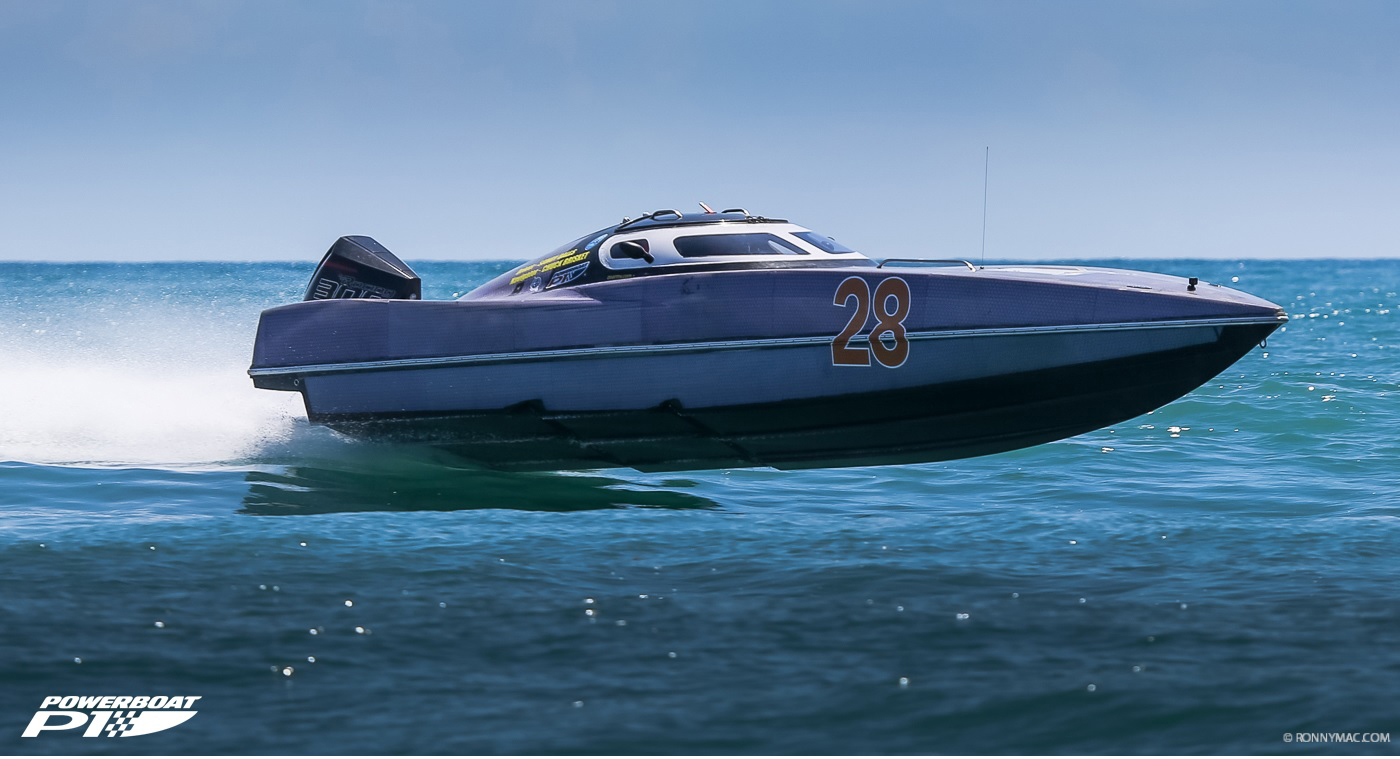 One of my favorites, the Superboat Stock class is enjoying a solid surge of boats not only because the twin outboards provide the best bang for your buck, but they too are reliable and predictable. And I don't hear anyone complaining about the minimal maintenance and fabulous five-year warranty.


The aquatic army of catamarans came charging out of the milling area in the second face-off that also welcomed two classes of Vee-bottoms. It was the hugest combined flotilla of hardware I have seen since the good old Factory 2 class racing era


Surgically cutting its way through rooster tail eruptions was Gary Ballough and Jimmie Harrison's recently splashed carbon-fiber 32-foot Victory FJ Propeller which was just a beauty to watch glide across the swells, all the while being tailed by Shadow Pirate fighting in second. Performance Boat Center/Auto Alert pushed hard making up ground lap after lap, but Shadow Pirate held the inside line after eyeing and eventually grabbing the lead over FJ Propeller and onto the award's stage later that evening.


Nick Scafidi is only to familiar with what a winning podium looks like having earned the 2017 Super Stock class title in Key West and the last two years with OPA Racing.

What made this victorious spar all the more phenomenal and inspiring was Scafidi made his premiere appearance as a one-man show taking control of both the sticks and steering wheel of his 32' Doug Wright, with the help of navigator Travis Booker.


After the race Scafidi said, "I had no regrets or hesitation. It took about three laps to get my rhythm and get into my focused Star Wars zone", and before I had a chance to ask him about the challenge of having so many other boats on the course, he added, "I like lap traffic, that's what makes a race a race."


In Super Vee Extreme Marker 17 Marine left its opponents in the wakes from the green to the checkered flag, only to find out a post-race penalty for the 29' Outerlimits being underweight moved the team to last. Steve and Stephen Kildahl, the father-and-son duo in Boatfloaters.com were awarded the win.


Pro Stock Vee boasted an impressive 11 registered entrants, each running a canopied Vee-bottom housing a single Mercury Racing 525EFI powerplant under the hatch. LSB/ Hurricane of Awesomeness danced through the slaloms with Typhoon vying to snatch the lead, but neither the hazardous hurricane nor the treacherous typhoon, saw what was about to come.


After LSB/Hurricane of Awesomeness became plagued with mechanical issues, the new team Fast Boys Racing driven by Ken Bolinger and throttled by Stan Perkoski worked their way to first place in their first race after punishing the waters and pushing the powerboat procession to their rear. 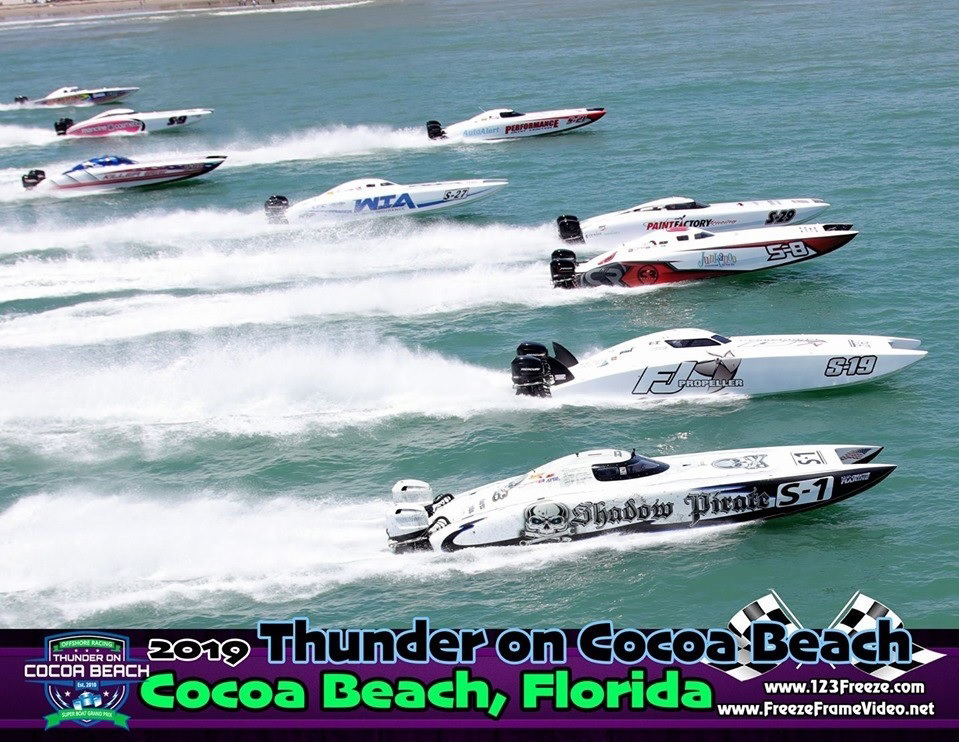 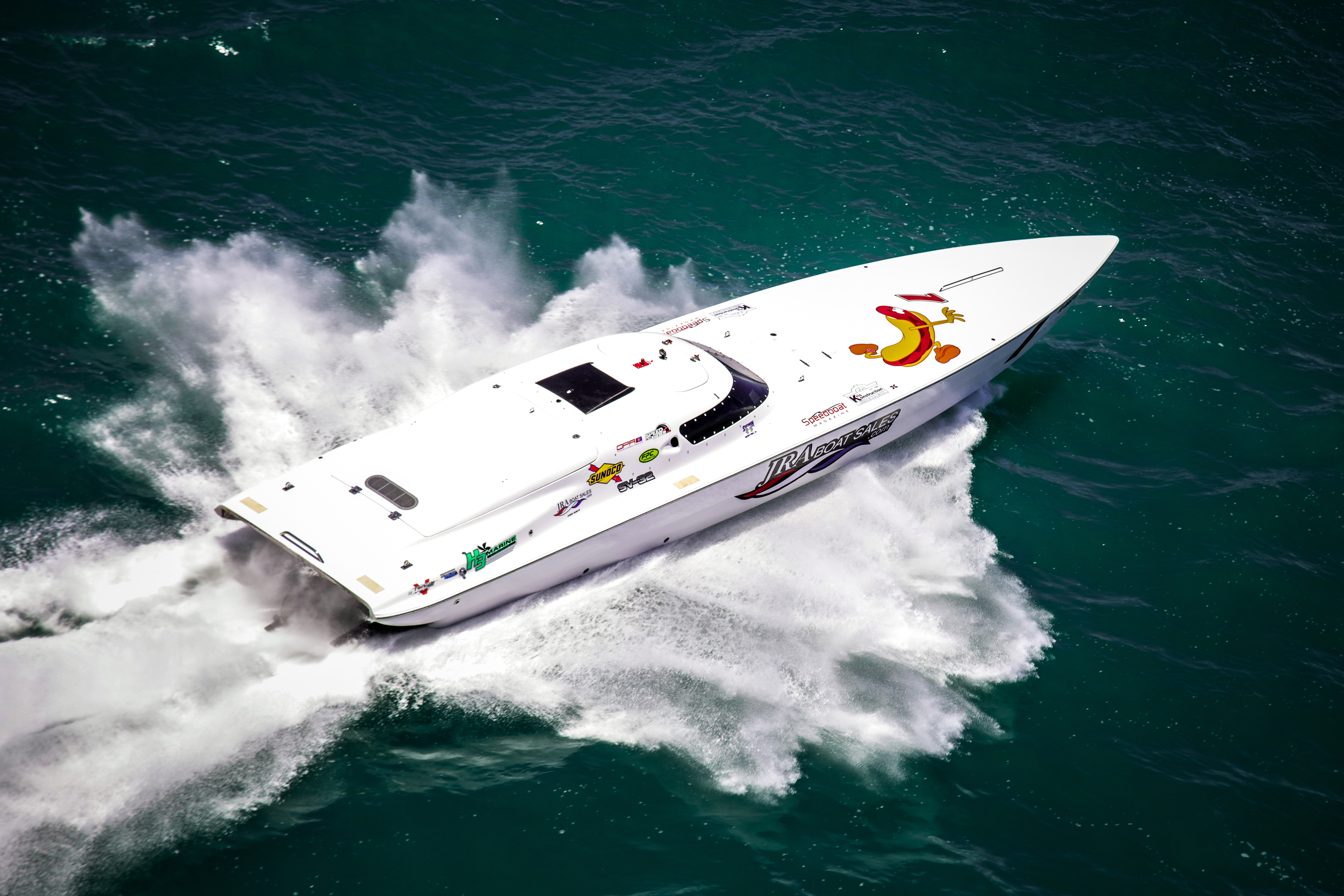 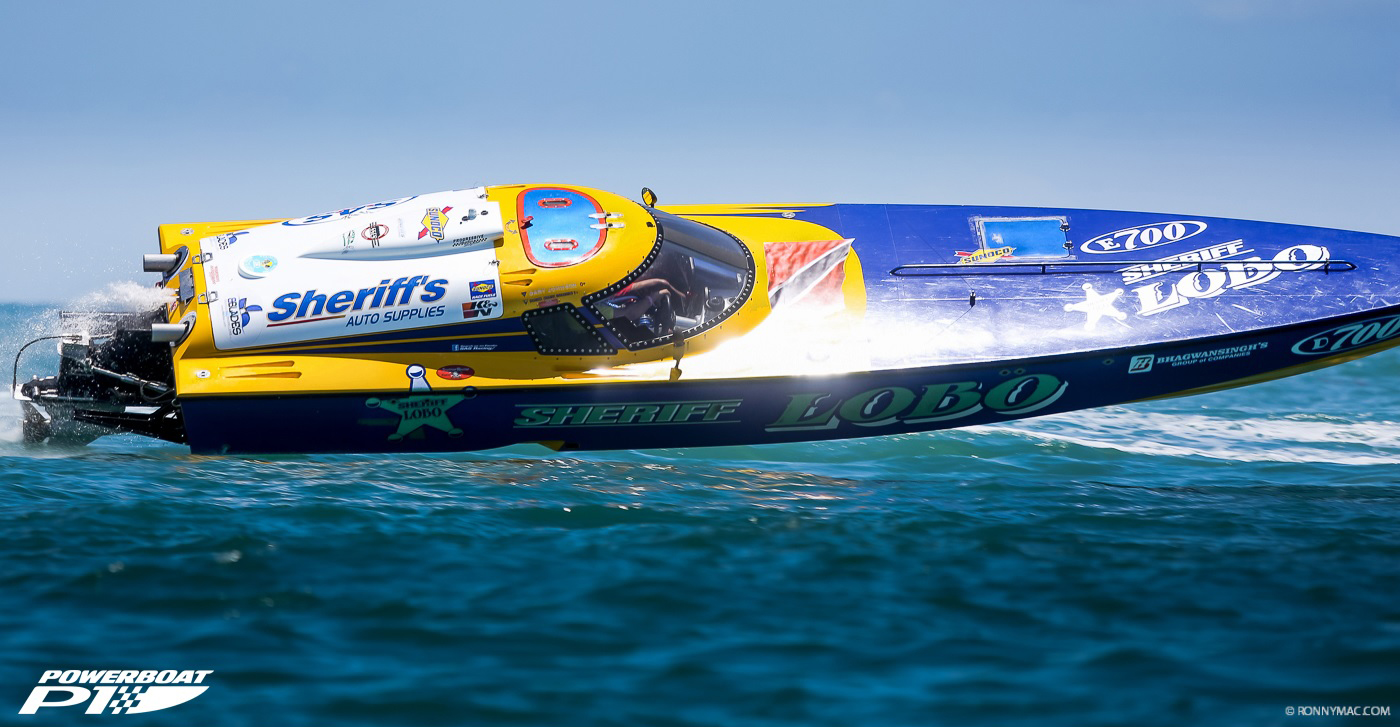 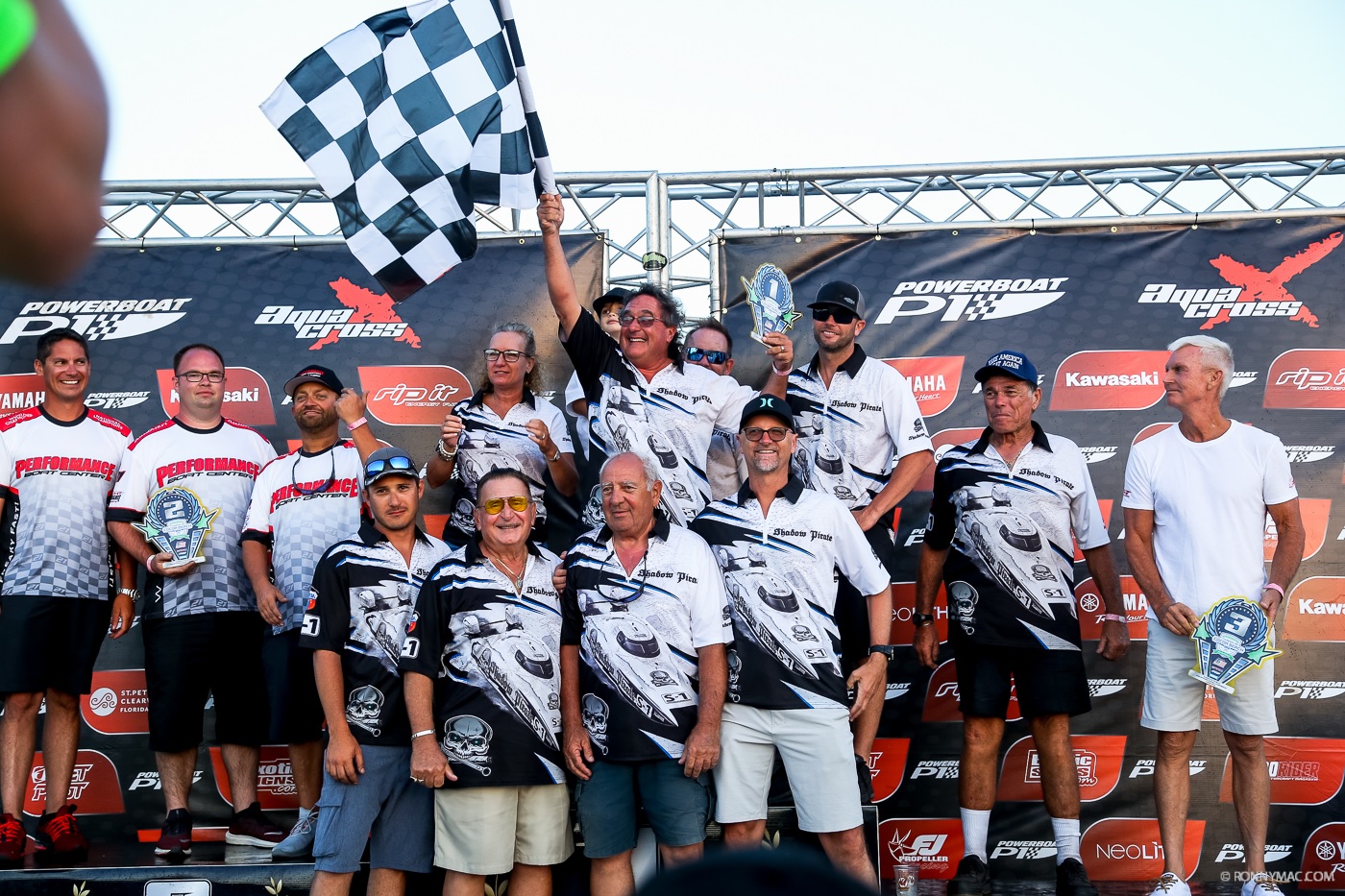 Supercats came out to dazzle in round three and while I could count them one hand, the Pro Floors Racing MTI and M-Con Skater deserve a big round of applause for uprooting the viewing audience from their beach chairs to the edge of the water to cheer them on. It was the deck-to-deck stuff we long for. Inching up on Pro Floors Racing with every lap, Tyler Miller and Tyson Garvin were a boat length away from sealing the deal, but Wayne Valder and Grant Bruggemann held on to the coveted and always congested popular inside lane for the triumph.

New-for-2019 is the Mercury Racing 1,100 Comp engine class racing under the name Class One International, in order to avoid confusion regarding the two already assigned Class 1 groups, the OPA speed-capped Class 1 and the non-operating UIM Class 1. For this forth and final race of the program, four catamarans and one Vee-bottom assembled at the start.


Mercury Racing exclusively developed the all-new mechancially sealed, tamper-proof electronic control unit (ECU) known as the 1100 Comp. It features aluminum four-valve cylinder heads and a dual overhead camshaft train and hopes to ensure a level playing field for all competitors. And as the Class One International handle says, this "international" group definately brought along the most passports as Cocoa Beach welcomed the Victory and Zaborowski Offshore Racing hailing from Dubai and 222 Offshore in from down-under in Australia.

Hometown hero Miss GEICO joined the class after having downgraded its 1650-hp motors opting to install the twin turbocharged competition engines in its 41-foot Victory catamaran. Not only were changes made in the engine compartment, but as the only U.S. team in the class, the Riviera Beach, Florida-based patriots unveiled a fresh red, blue and chrome graphic paying homage to our great country across the hull.


It was this same iridescent hull Miss GEICO that stole the show taking an even more commanding lead after Victory never quite recovered from its shaky sideways flight towards the middle of the bout. Lucas Oil/Silverhook was the lone red Vee-bottom joining this group for the season with a two-pack of Mercury Racing 1350s down below.

Night-time festivities were as rocking as the waves were by day. Both Thursday's VIP racer meet and greet at Java Juice Cafe and Friday's famous boat parade and Coconuts on the Beach Tiki Bar soiree were packed, yet it was the grand opening of JT's Social House inside the La Quinta Inn, both owned by fellow racer JJ Turk and his family that was a standing-room only!

Let me just say there was no vacancy there on Saturday night for its official opening/ racer welcome party. It was top shelf all the way from its fabulous presentation of internationally inspired cuisine and Sushi boats to the countless super-sized TV screens running powerboating footage the whole night through.


And for the kids, making a grand slam was Saturday's radio-controlled boat competition in the waterway alongside the dry pits, organized with the help of Pro Marine RC. It was a cool treat to see little mini Skaters and Outerlimits blasting around. The company is selling the boats is owned by Peppers Racing throttleman Mike Stancombe and I highly recommend checking out his website www.promarinerc.com.


The P1 Superstock race will be on Fox Sports Sunday, June 2nd at 6 p.m. and the P1 APBA Offshore Powerboat Series premiers on CBS on Sunday, June 16th at 1 p.m. For further info check out www.Powerboatp1.com, www.oparacing.org or tell River Dave you want more racing stories!


See ya on the seas.. DinaRella 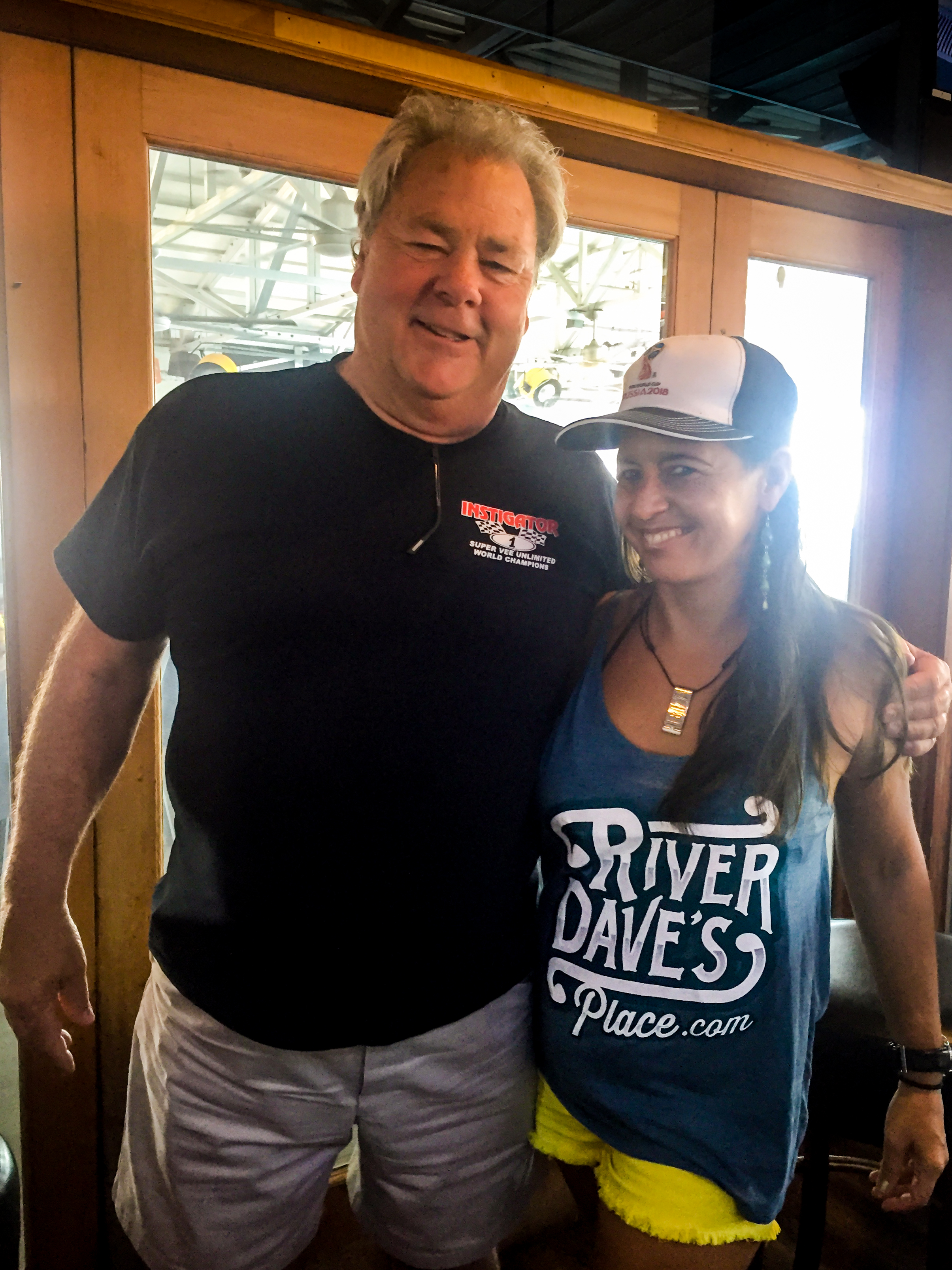 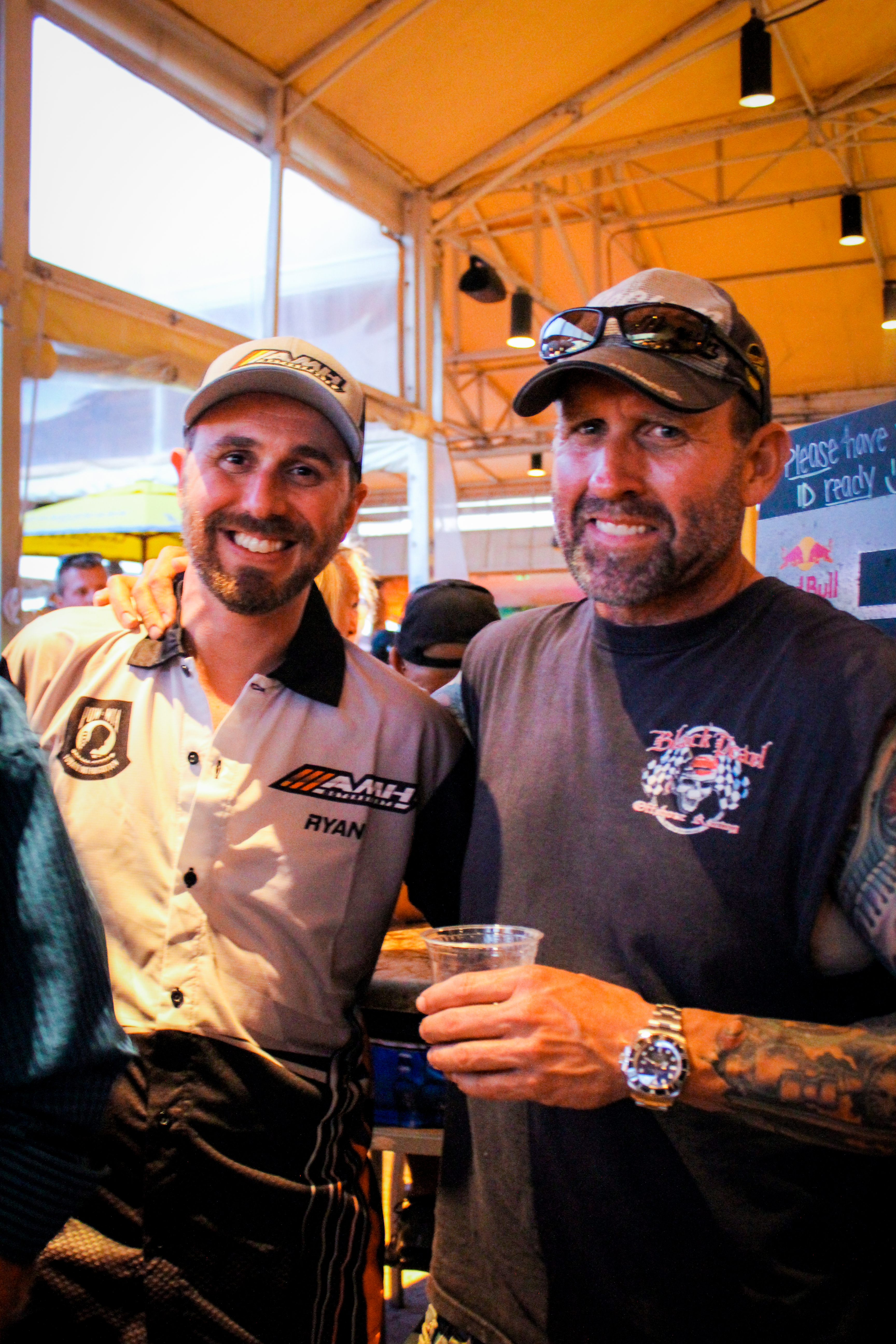 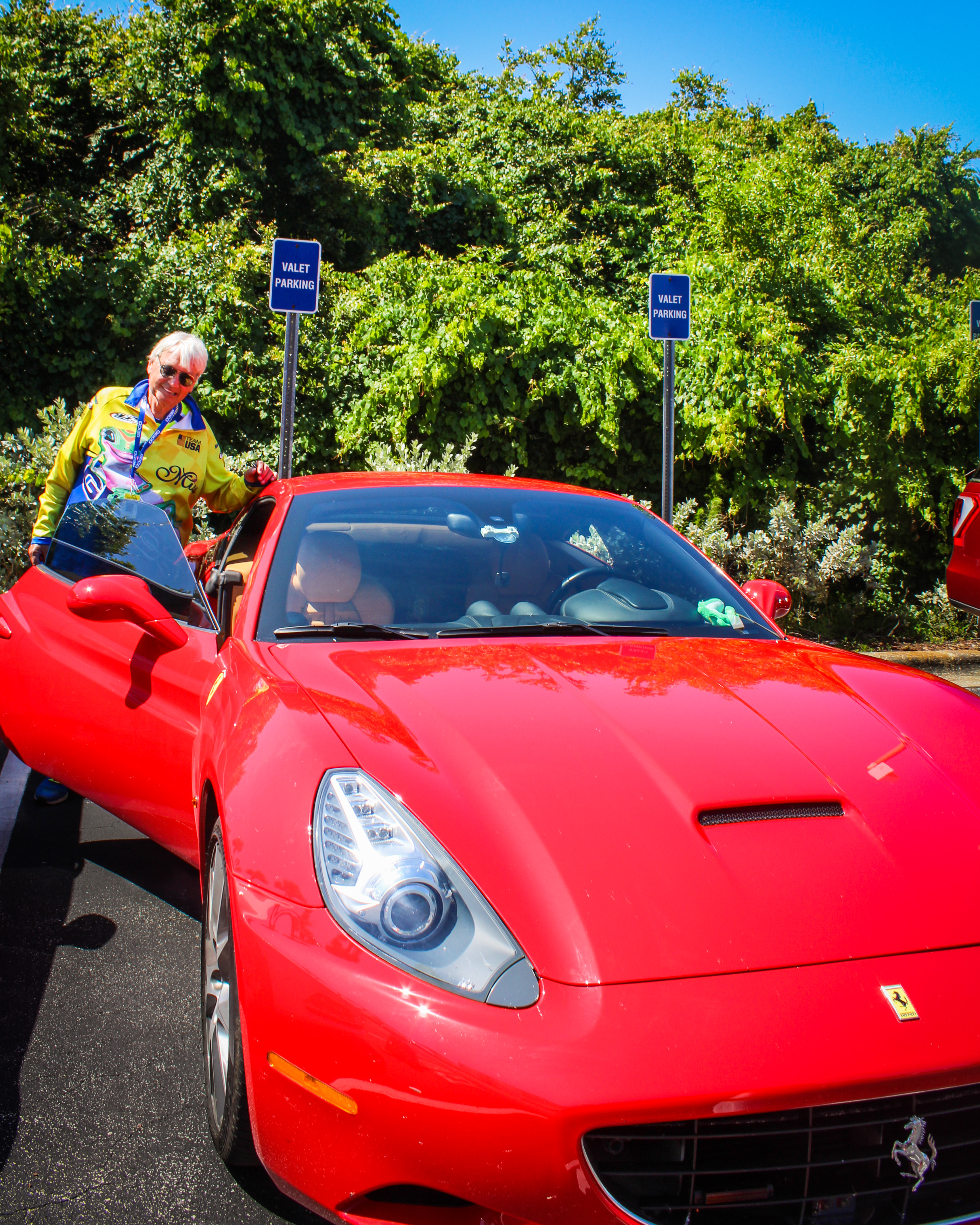 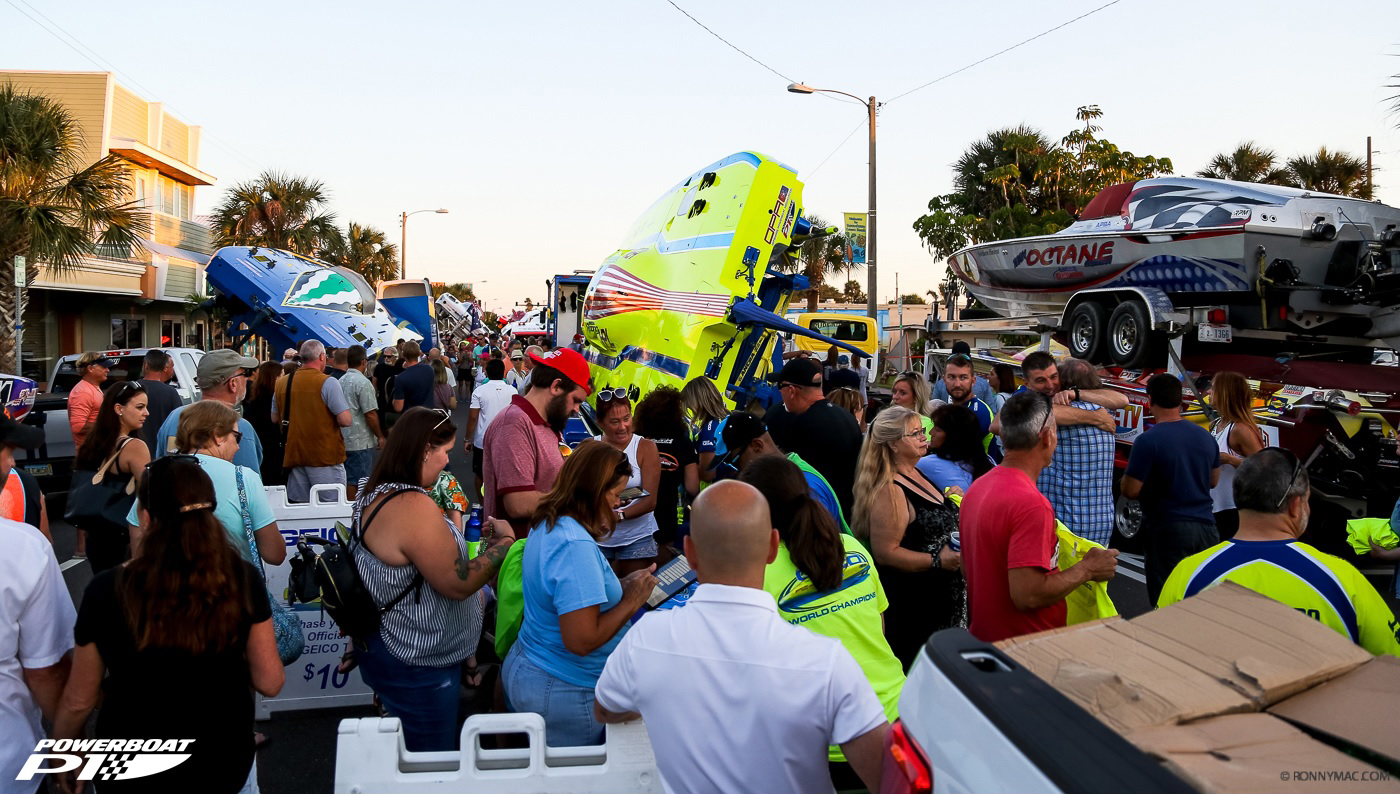 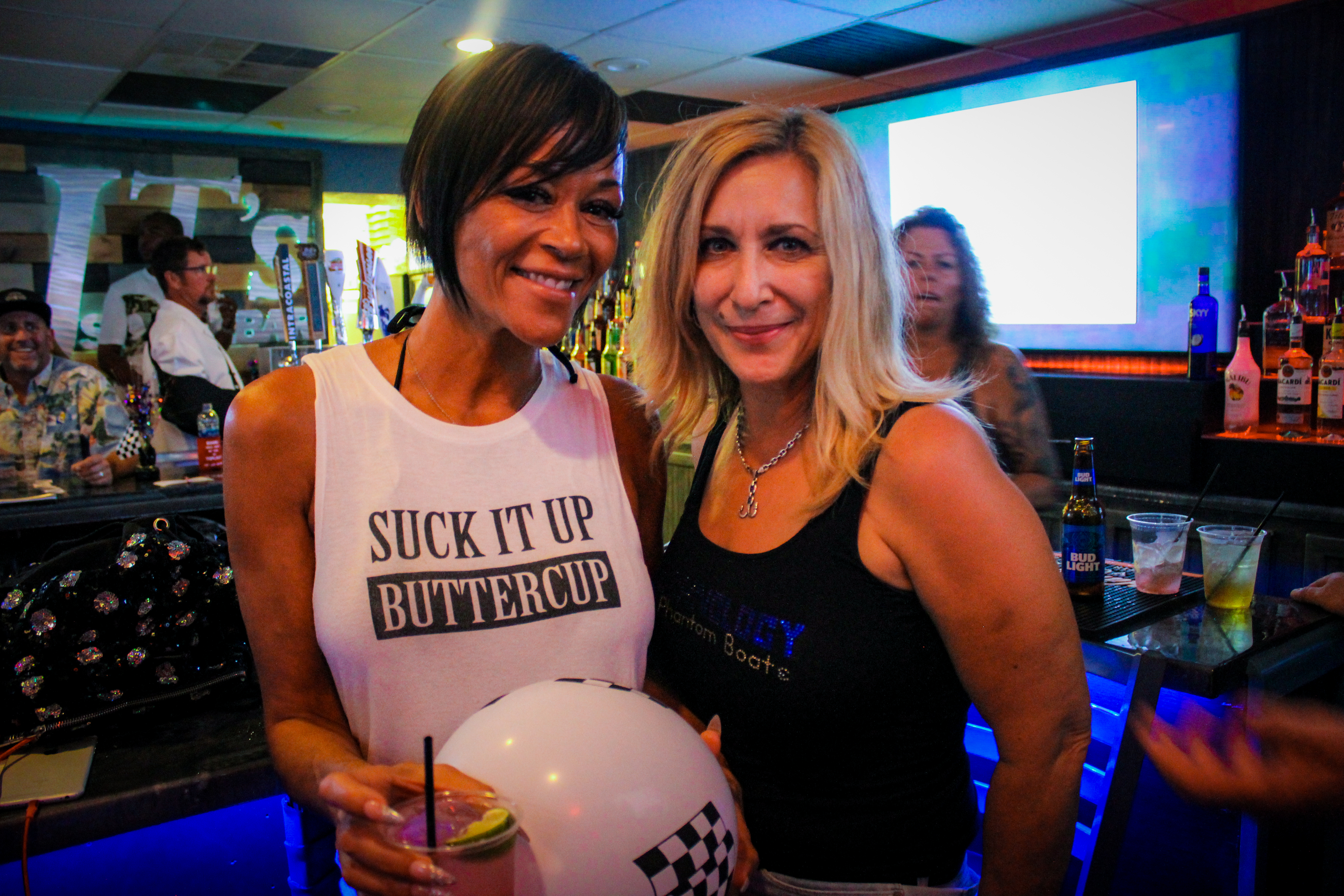 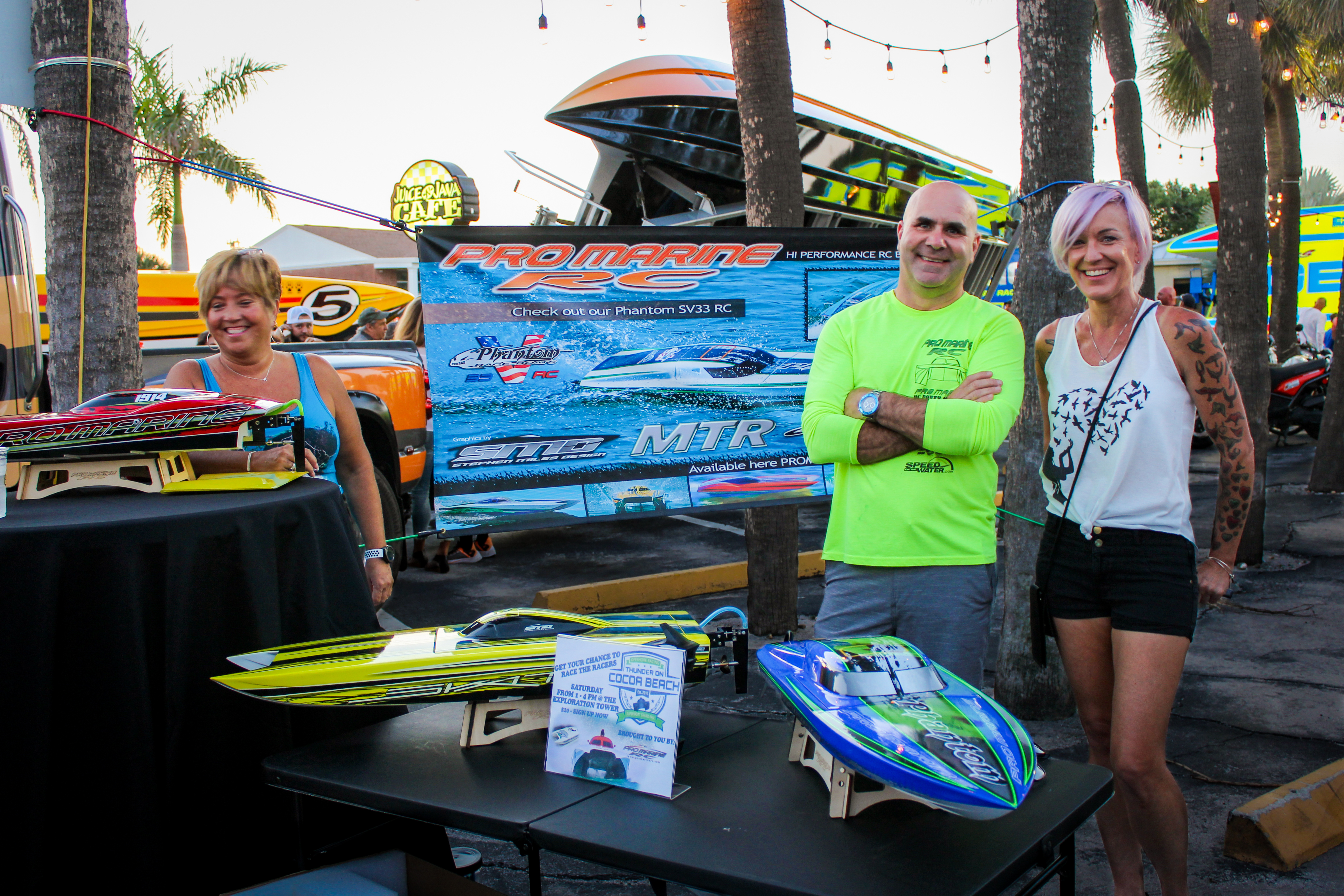