It’s the end of another great day on the water. The boat is back on the trailer and ready to head for home. Just one more thing left to do…..give it a fresh water bath and flush if you’ve been ocean boating.

The boat bath part is pretty simple, but what about the fresh water engine flush? That’s right, not so easy, especially if you’ve got a stern drive or perhaps an inboard direct drive or V-drive. The all too familiar process goes something like this; dig around in your tool kit to find one of those suction-cup earmuff looking contraptions for the lower unit (that never seem to want to stay on) or crawl into the engine compartment and hunt for a place to disconnect the incoming water hose.
. 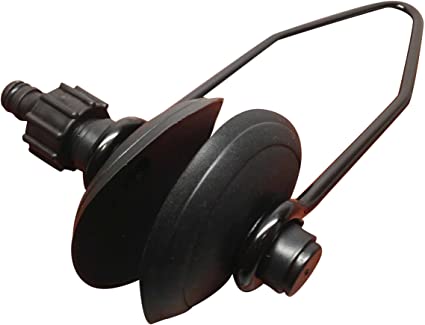 No matter how many times you’ve done it, engine flushing doesn’t get any easier. It’s either wet, messy or more work than it should be. And that’s exactly what the experts at Eddie Marine/Motorsports thought too when they decided to simplify the chore of flushing your inboard motor.

Their solution is the Deluxe Flushing Kit with Deck Fill. And there are three great things about it….it retails for only a little over $200.00, it’s an easy do-it-yourself 1-2 hour install and it makes motor flushing a breeze, not a chore.

Depending upon where you go boating, flushing vital metal components like engine cooling passages, exhaust manifolds and risers, heat exchangers and intercoolers is a mandatory practice if boaters hope to keep their boat in top running order. Marine industry estimates say that approximately 30 to 50 percent of all mechanical failures are the result of corrosion.

Some boaters make the mistake believing that they only need to flush their engine after use in saltwater. This is definitely not the case. Many fresh water lakes and rivers have abnormally high mineral content, frequently producing a very brackish condition. Although these fresh water bodies are technically not saltwater, they can be just as harmful, quickly corroding and clogging cooling passageways which always lead to expensive repairs.

Boaters should also know that just because their engine might be of the closed cooling system type (newer marine engines are often equipped with a heat exchanger which acts like a car radiator of sorts cooling the liquid inside the engine with the help of a thermostat), that doesn’t relieve them from the responsibility of flushing. A closed system may protect the internal engine from raw water corrosion, but there’s still raw water circulating through exhaust manifolds, risers and heat exchangers just the same as open systems do.

So what are the benefits? First, it makes the connection of the fresh water flush hose a snap thanks to the convenient deck fill. Simply unscrew the fill cap and the twist-on hose connection is right there, no more bending or playing contortionist in the bilge to make a hook-up. Secondly, once the kit is installed, the handy ball value only needs a quarter turn to switch the incoming fresh water to the flushing mode. When the 4 to 5 minute flushing procedure is complete, simply turn the ball valve back to the normal operating range, disconnect the fresh water flushing hose and you’re done.

In case you happen to have an engine compartment that is really cramped with limited access, Eddie Marine/Motorsports also has an auto/electric upgrade for the flushing system which eliminates the need to manually turn the ball valve. Instead, the ball valve is controlled by a solenoid actuator which operates from a helm switch. Just hook-up the hose. Turn-on the water and flip the switch, it can’t get any easier than that.

No more excuses. Engine flushing doesn’t have to be that big a deal. It’s just five-minutes which will make an eternity of difference in the longevity of your boat. Here’s a typical step-by-step installation performed by Rode’s Way Boats in Upland, CA. 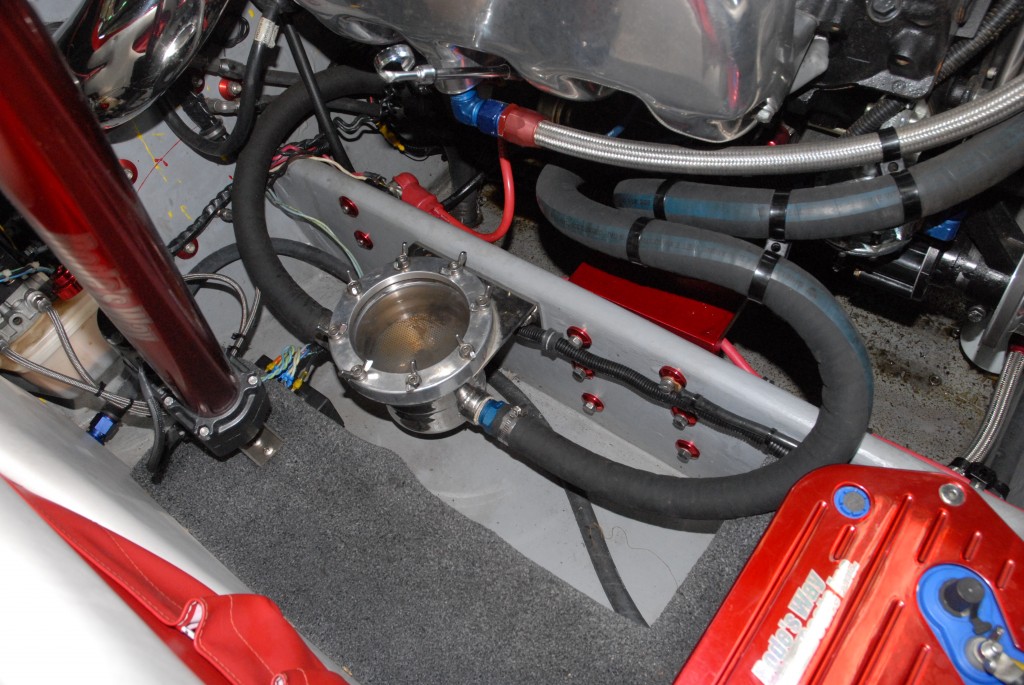 The boat ready for an installation is a 20-foot Hallett Vector, a popular vee-bottom performance ski boat with a Bravo I stern drive. It's typical of a raw water cooled engine set-up with the water intake running through a sea strainer and then into the water-jacketed EMI Thunder aluminum exhaust manifolds and engine. 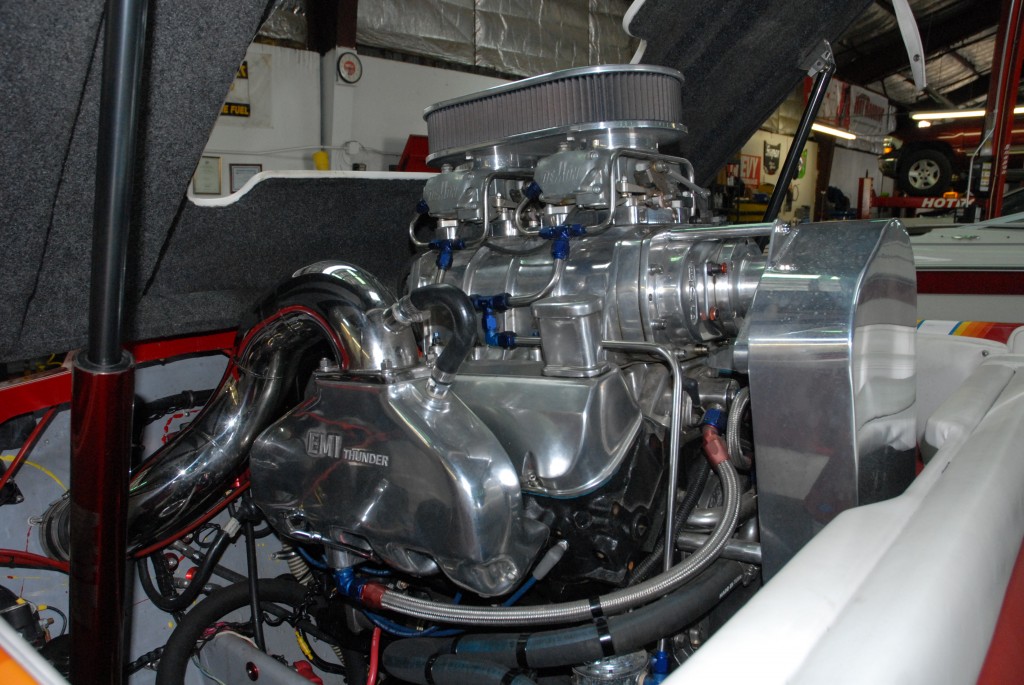 T
The power for this Hallett Vector is significant. It's a supercharged 500+ cubic inch Chevy with twin four barrel carbs. 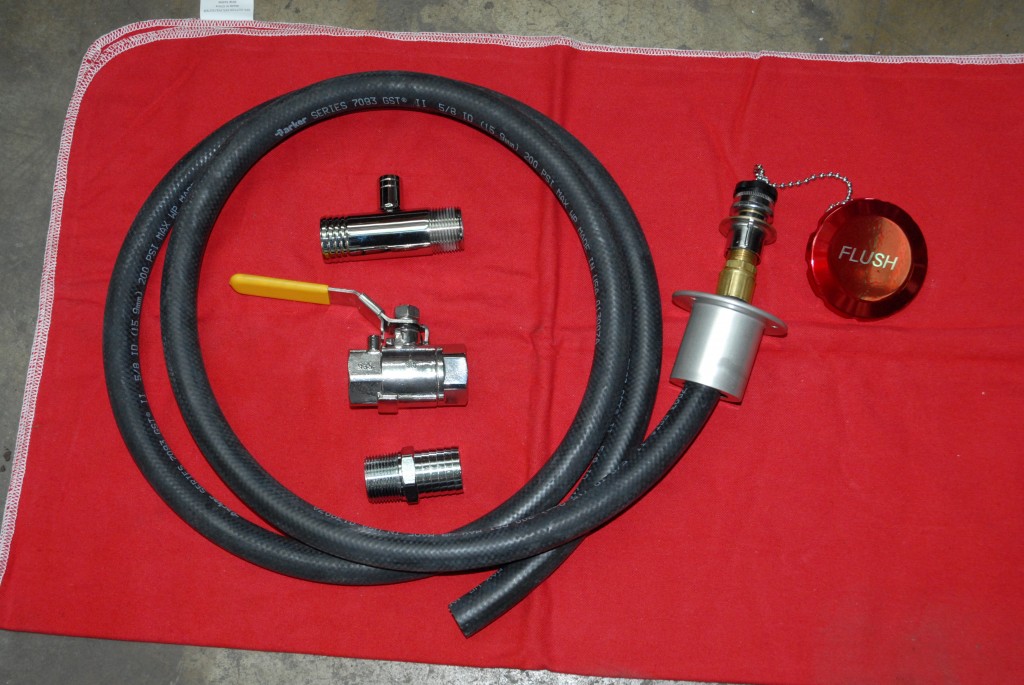 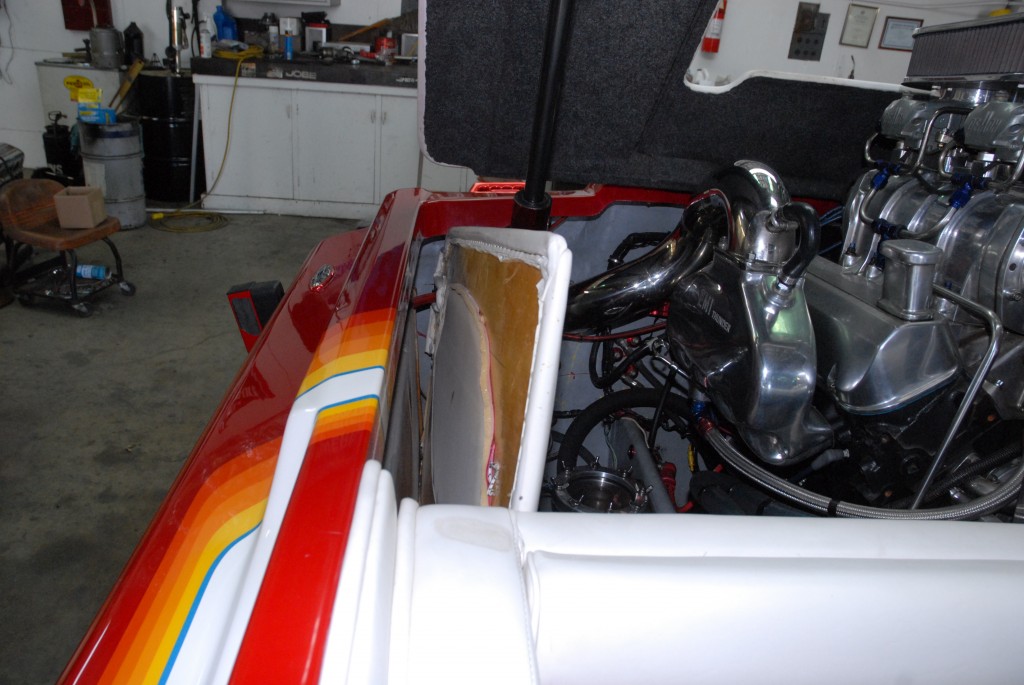 Because the installation begins with adding deck hardware, the upholstered gunnel panel must be removed. Depending on how it is attached (usually bolted) it removes easily in just a few minutes. 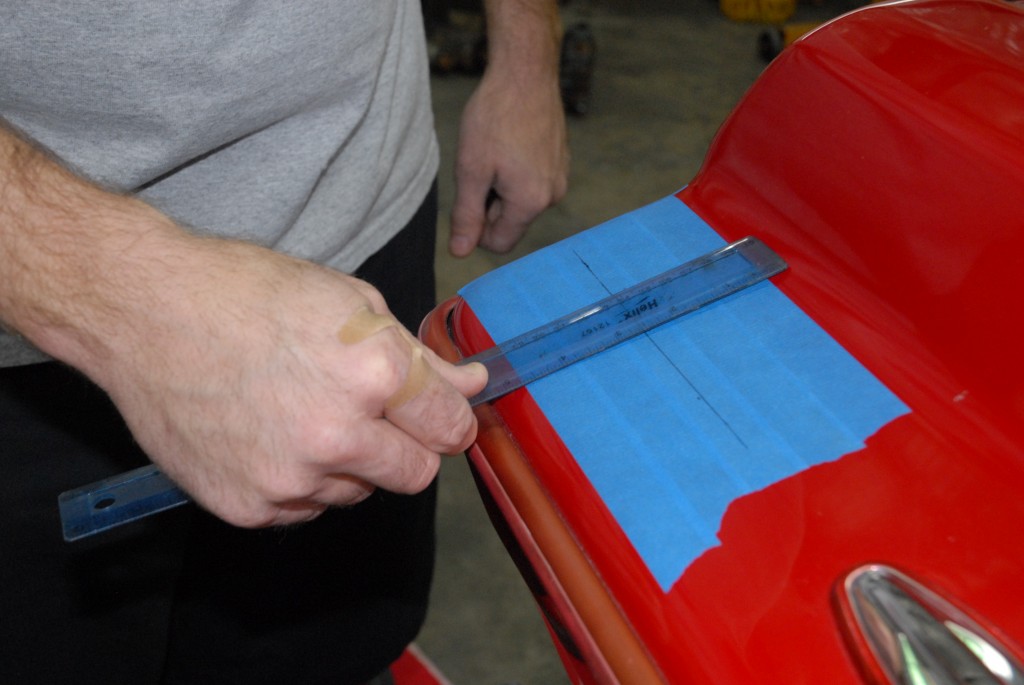 Since a hole saw drill will be necessary to cut the opening in the deck, make sure that the deck fill is being located where no electrical wires or cables will be disturbed during the install. It's always best to measure twice before you cut. Also important, make sure to tape the outer deck where the hole will be drilled. This will protect the gelcoat around the new hole from flaking. 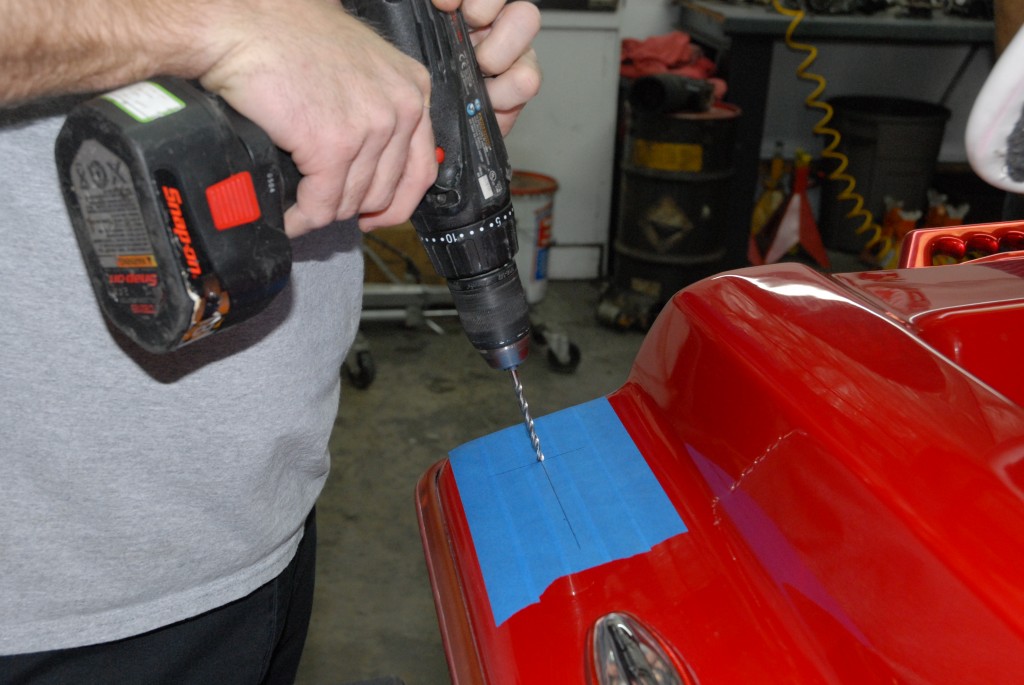 In order to make an accurate cut, it's always advised to drill a small pilot hole first to locate the exact center of where the hole will be cut. 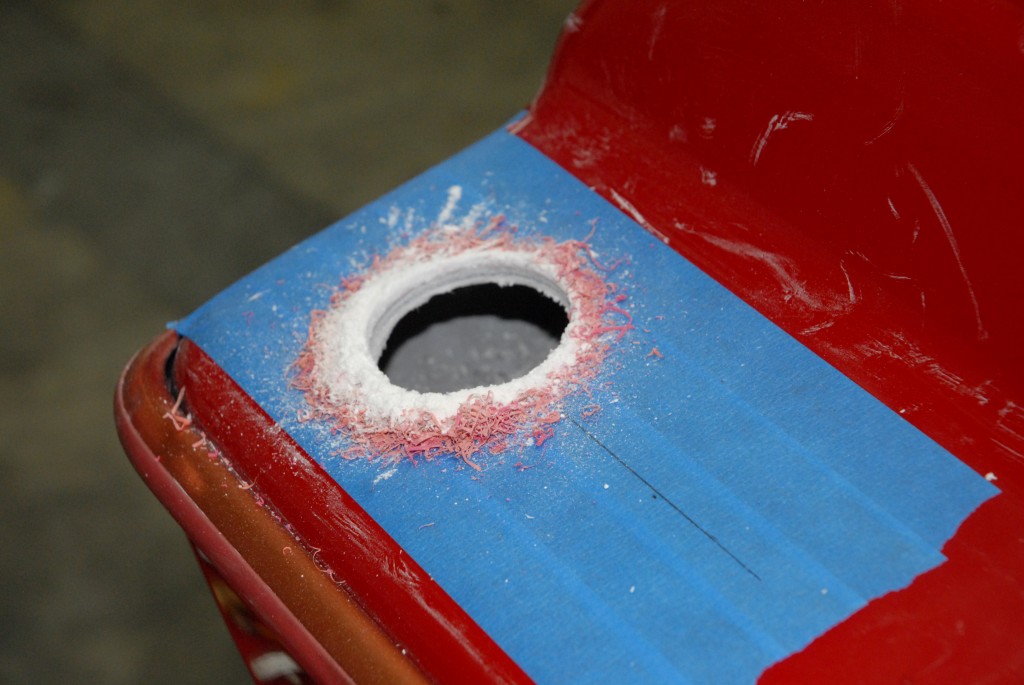 Now you're ready to drill the hole for the deck fill. Note the clean edge around the cut. 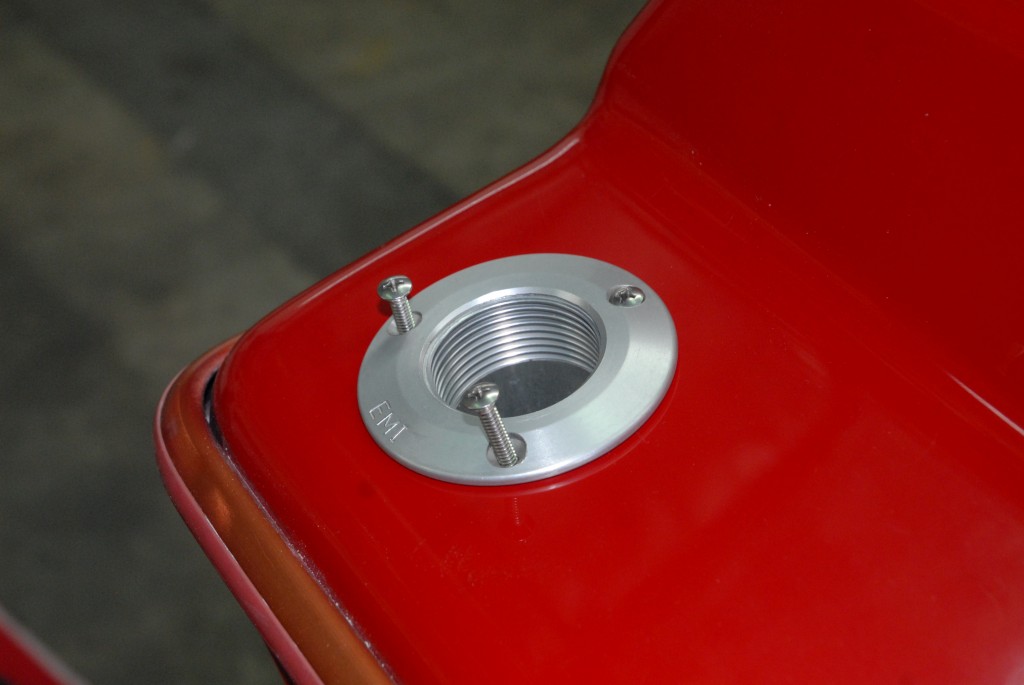 Installation of the deck fill is simple, just three bolt holes must be drilled, then tighten down the bolts with washers and nuts. Don't forget to remove all of the protective tape around the hole. 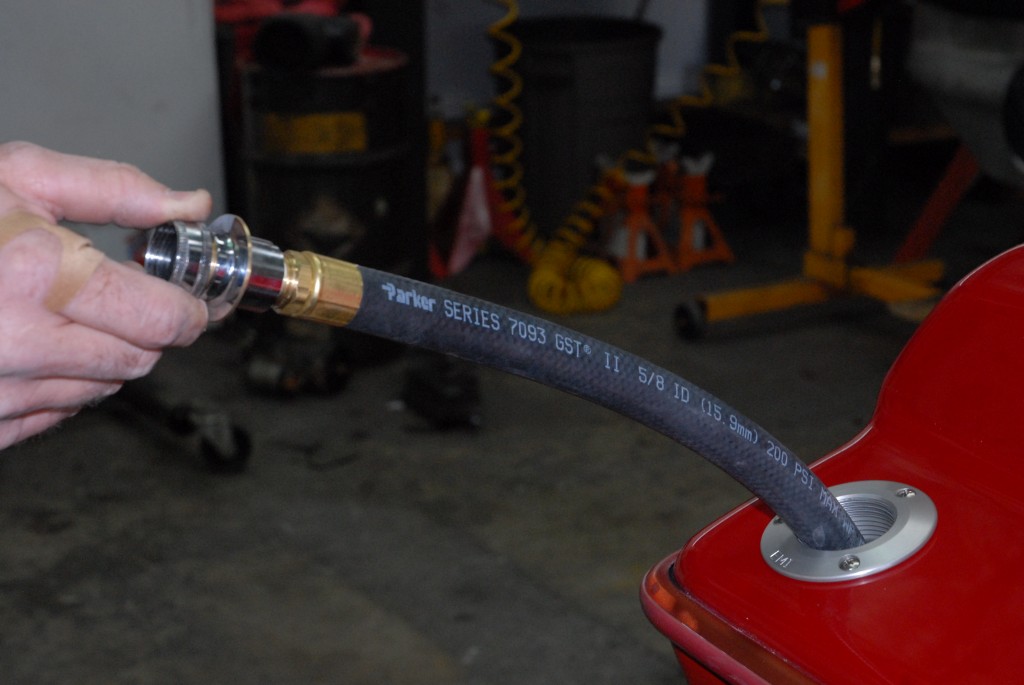 Now take the hose and feed it through the deck fill. The connection/cap for the garden hose end has already been installed. 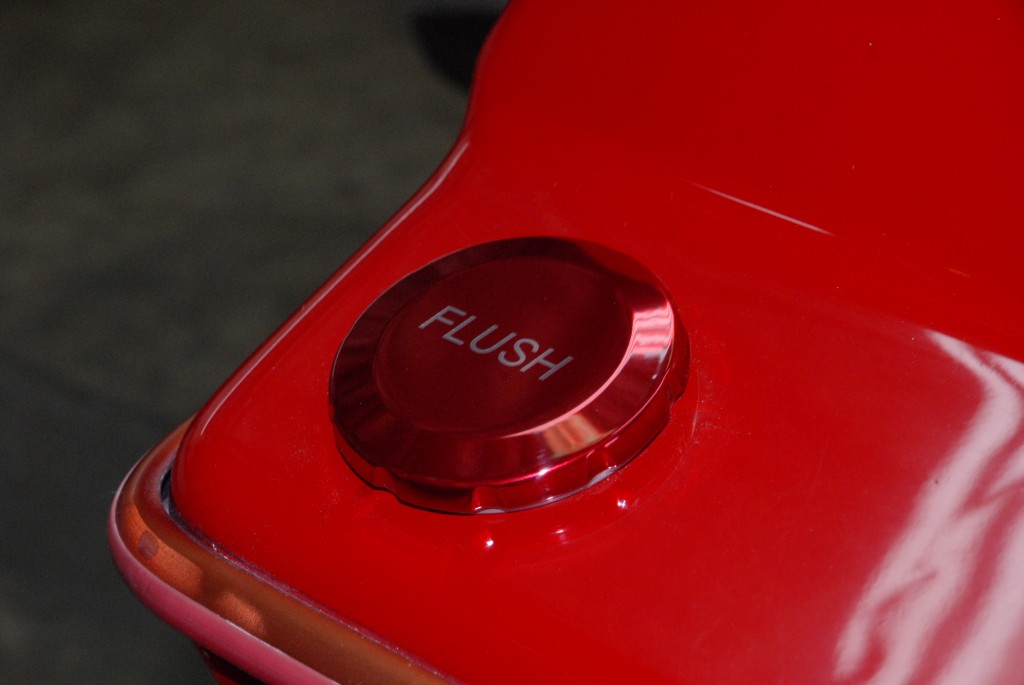 Phase 1 of the job is done. Deck fill is complete and flush hose is now in the engine compartment. Time to reinstall the upholstered gunnel panel. 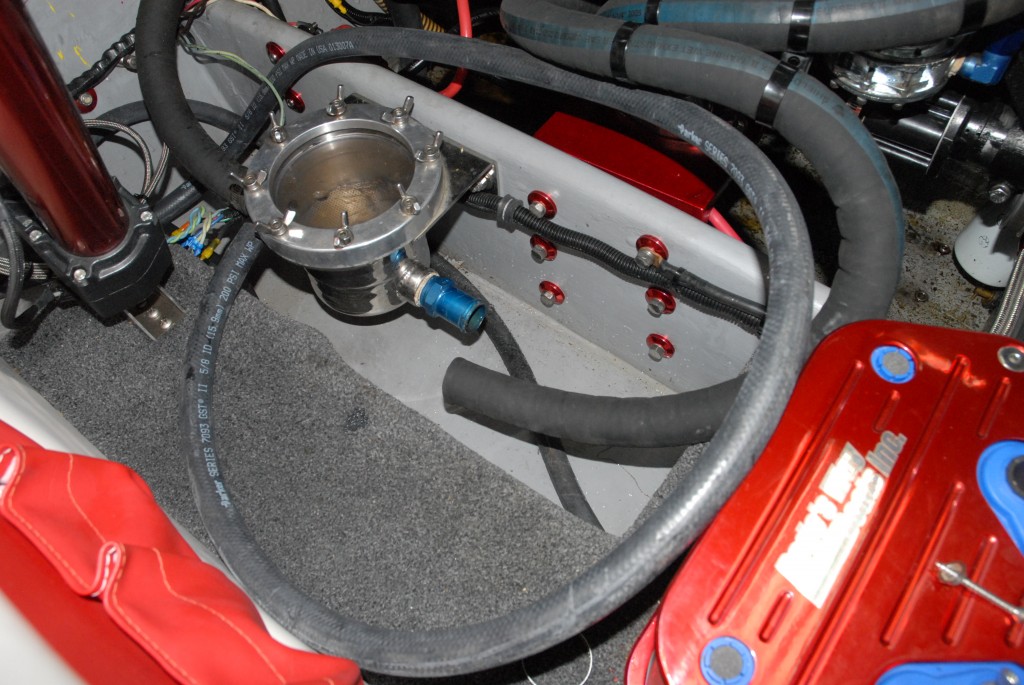 The water intake line to the engine from the sea strainer has now been disconnected. Note that the existing push-on hose fitting to the exit side of the sea strainer is still being used in this example. 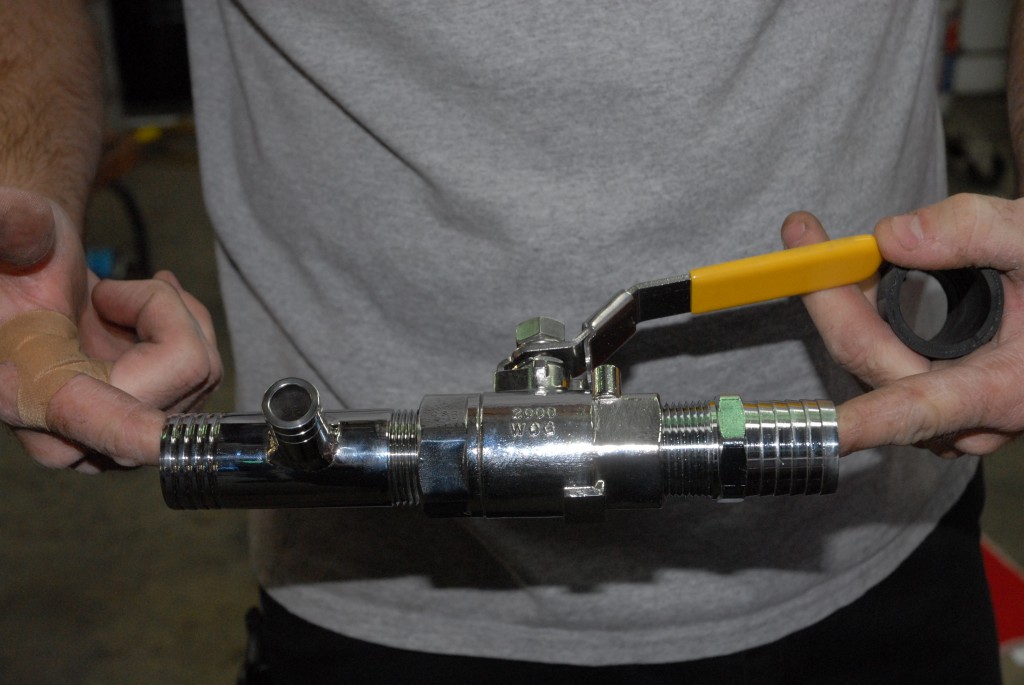 Here’s a close-up of the assembled mechanical ball valve. In this example, both fittings have push-on hose ends for connection. On the left is the special Eddie Marine tee-fitting with the 90 degree barb for connecting the flush hose. 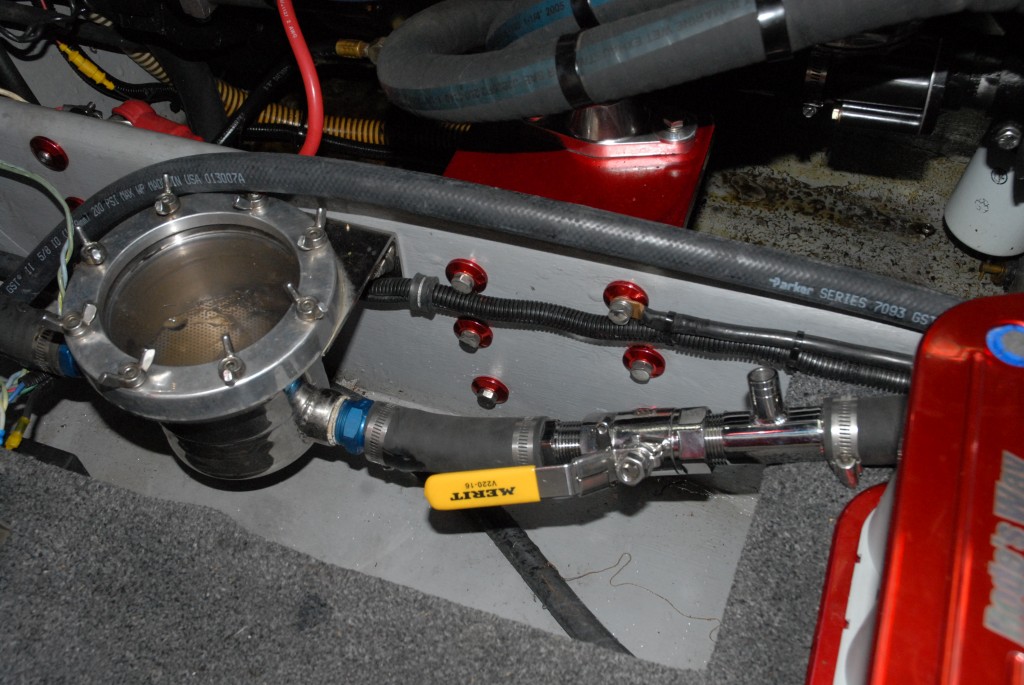 This is the standard way of connecting the flush kit system. A short piece of rubber hose connects the sea strainer to one side of the ball valve, then the water line to the engine is clamped to the opposite end of the ball valve. Note that the barb fitting has not yet been connected to the incoming flush hose. 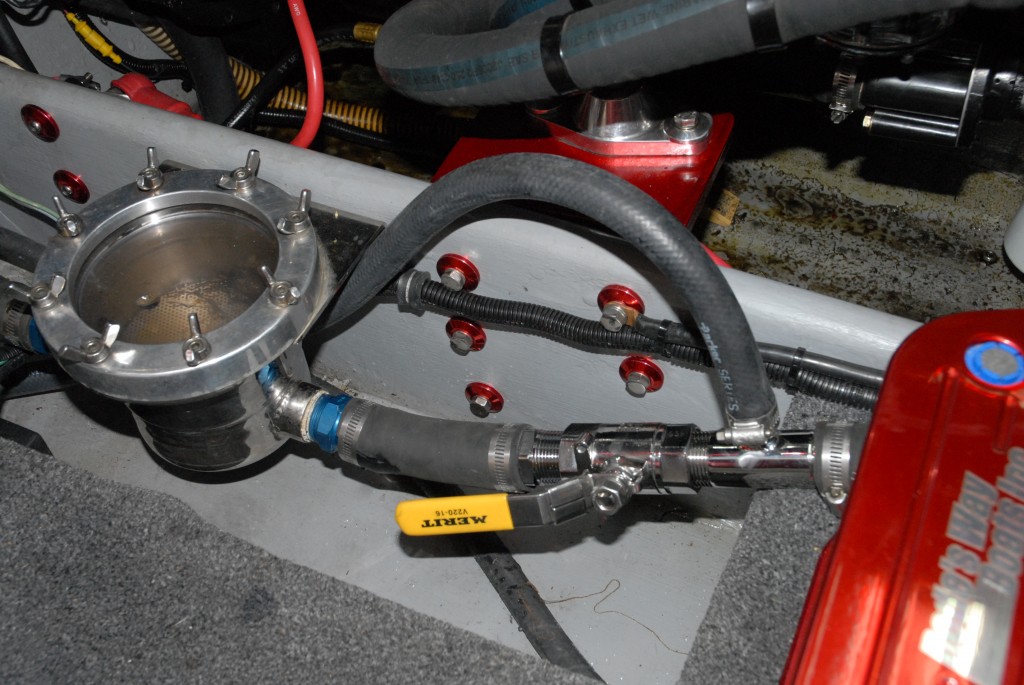 The standard method of installation is now complete. The flush hose is connected to the tee-barb. Note that the ball valve is open when the handle is straight in-line, sending water from the sea strainer directly to the engine. A quarter turn of the handle shuts off that flow pattern and isolates the flow only to water incoming from the flush hose. After flushing is complete, always remember to return the handle to the straight in-line position. 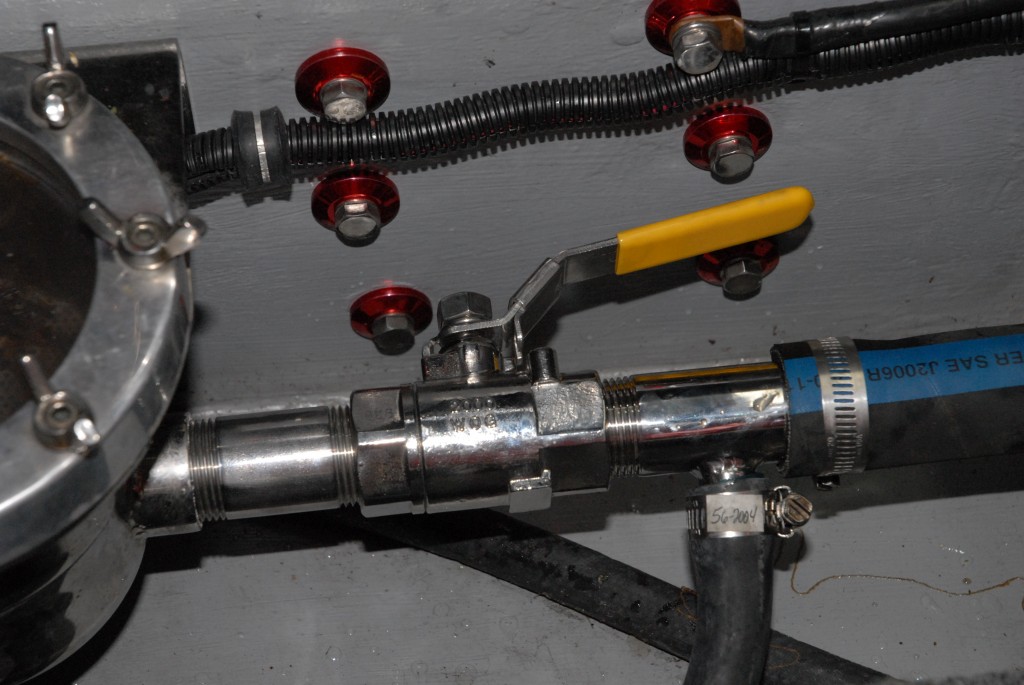 If you’d prefer to make the installation a little more compact, Eddie Marine also offers an optional double threaded fitting that connects the sea strainer and the ball valve as a solid unit. This eliminates the need for a short piece of push-on hose between the two.

In some situations (especially tight side-by-side twin engines on larger boats), it’s difficult to reach into the engine compartment and manually turn the handle on the ball valve. Eddie Marine has an answer for that too with an electrically controlled solenoid ball valve that opens and closes with an activation switch at the helm.