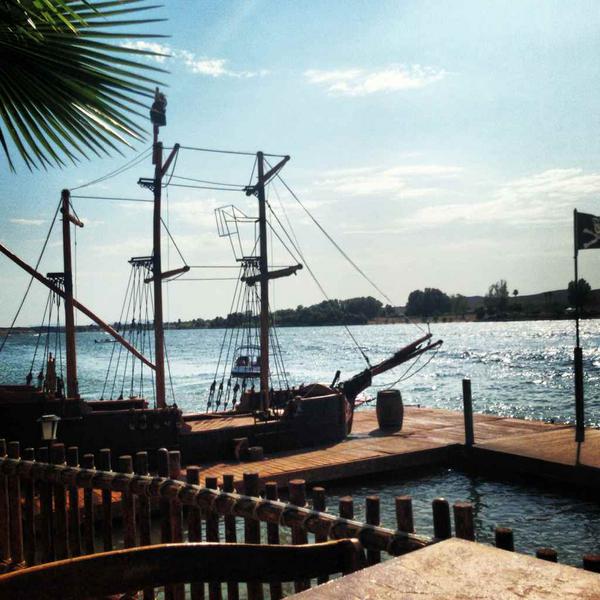 Saturday we were moving a little slow, well everybody but Nord, go figure . Lol... The idea had come up to hit Topock and Pirates Cove as neither Nord or I had been up there by boat. Stacy was the deciding factor and put her foot down and told us we were headed to Parker. Either way was fine with me and Dave had to meet up with somebody to pre run the enduro course to tentatively scout where the the buoys and turns were going to be laid out. We arrived to launch at pirates den and saw everyone attending the memorial run for Terry Jessie ....

After we had a couple of beers it was off to meet Mike and drop off the kids and Stacy's at the Kelegians and run the course. Thanks again Andrew and Barb ! Your hospitality is greatly appreciated ! After we returned Nord went with barb and Andrew to take barb on her daily ski ride she enjoys . Dave ,Stacy and I stayed back . Ironically Stacy's cousins were staying a few houses up from Andrew and Barbs house so we hung out with them while Nord was out on the boat. It was getting dark and we contemplates going to see the fireworks at the Bluewater. In years past they had never gone off in time so we opted to put the boat on the trailer and head back home, we had the kids and they were already sleeping.

Sure enough , as we are pulling out we can see the fireworks go off in the distance !!! Go figure

Dave making up to Stacy

Nord hooking up the Schiada

This was a first for me. No bar stops in Parker this time !!!

There was a Mcrib sighting in the keys but my phone was dead, we saw STV Keith and crew as well! No lynch, RB or dezert rider sighting though, saw Brian's stoker docked up at lynchs but it looked like nobody was home . Maybe they were at RR ?

We were headed back home thinking of what to eat and what we saw coming into town was like the batman logo in the sky, it was calling our name..... Shogun !!!

So we stopped into shogun, Nord and I had a couple bottles of Saki with dinner anticipating hitting Flying X again since we had so much fun the night before. Nothing really exciting to talk about while we at dinner, as the excitement was waiting for us outside.......