Article Gallery
In Part 1 of the Harlan Orrin interview, we chronicled Harlan’s amazing longevity and influence on the development and innovations of the west coast custom boat building business since the mid-1950s. This part of his story focuses on more recent projects including the building of a replica of the Rich Hallett designed/built world record setting blown fuel drag hydro of the 1960s, "Banzai." On March 31, 1963, "Banzai" with owner/driver Barry McCown at the helm, set a new quarter mile speed record at Long Beach Marine Stadium of 161.87 mph to become one of the most famous drag boats of all-time
. 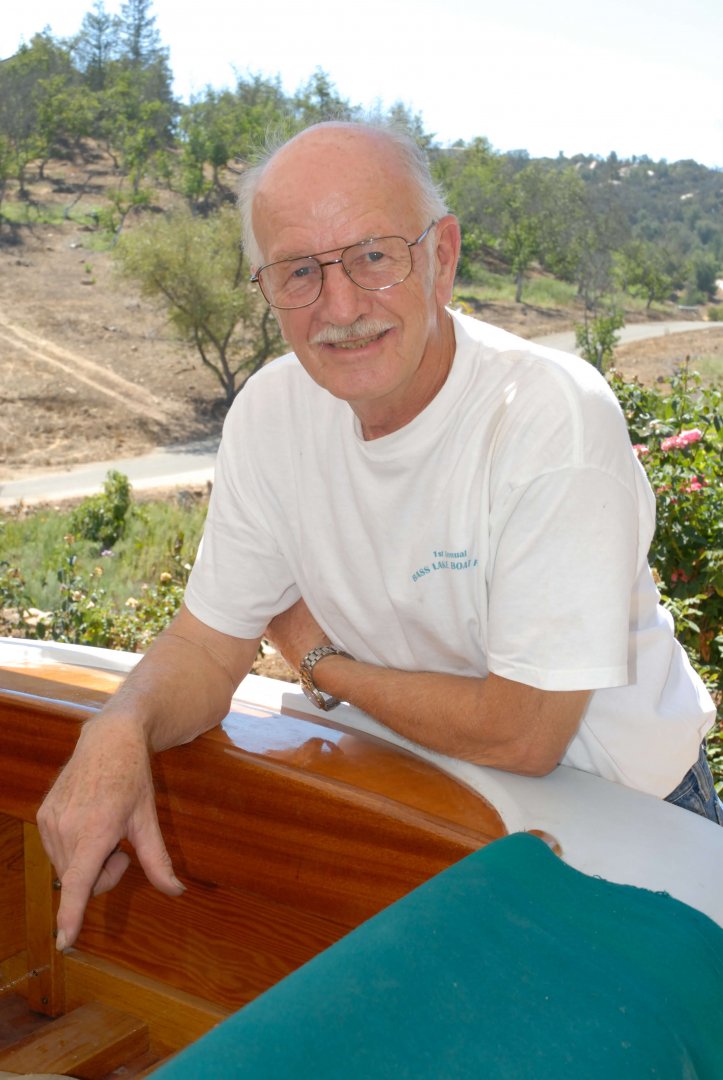 About ten years ago, Barry approached Harlan regarding building another "Banzai" for show and occasional exhibition runs. That journey is still a work in progress.


Tell us a little bit about the original Banzai drag hydro:

The boat was all-wood three-point hydro built by Rich Hallett here in Southern California in late 1961. Barry McCown was a young drag boat racer at the time and had recently crashed his flatbottom boat and was looking to build another flatbottom until he and Rich hooked up and got the idea to build a hydroplane instead. I believe Barry was working for Keith Black at the time. 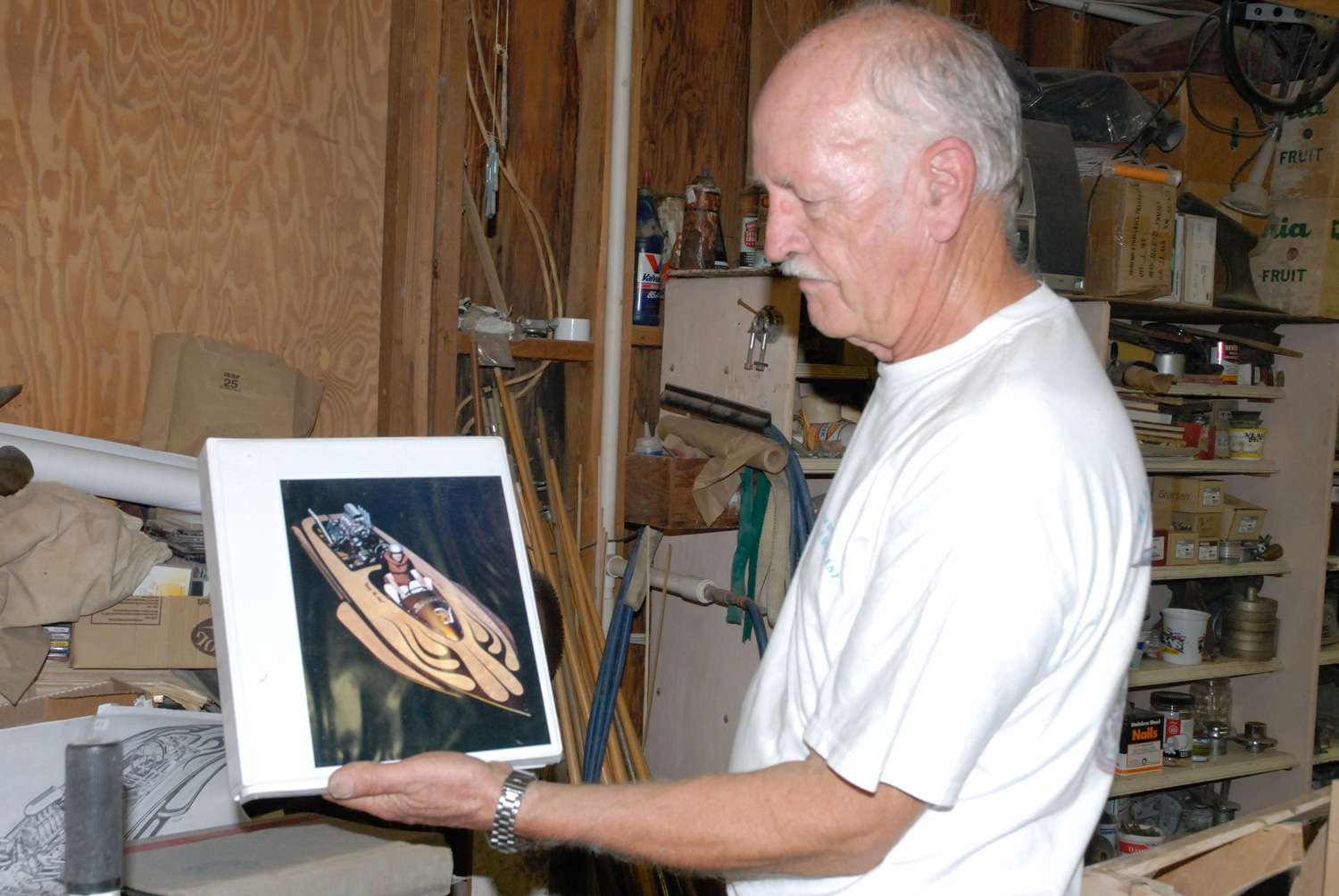 Before building "Banzai", had Rich Hallett built any other drag hydroplanes?

Rich had built both "The Thing" and "The Golden Thing" before "Banzai." All the boats were similar in design, but "Banzai" was about 19-feet long where the other two boats were only 18-footers.

When did "Banzai" set the drag boat world speed record? 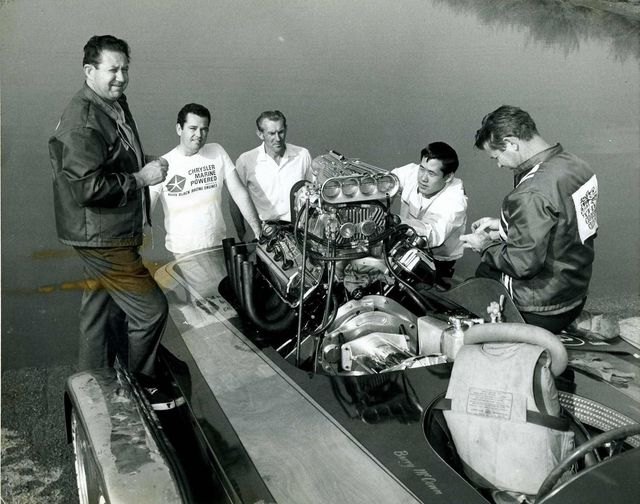 That was in late March 1963 at Long Beach Marine Stadium. The engine was a 1958 Chrysler Hemi 392 which was the favorite engine back then for both land and water drag racers. Of course, the engine was built by Keith Black. After Barry went over the 160 mph mark, Long Beach City officials were concerned that drag boat speeds now exceeded the capabilities of the Stadium. What followed was a ban on nitro methane fuel in the blown hydros at Long Beach. Only straight gasoline was allowed which dropped top speeds by 10 to 15 miles an hour. After that, "Banzai" had two motors, one that ran on nitro methane and one that used just regular pump gasoline.

How did you go about recreating a replica of the original "Banzai"? 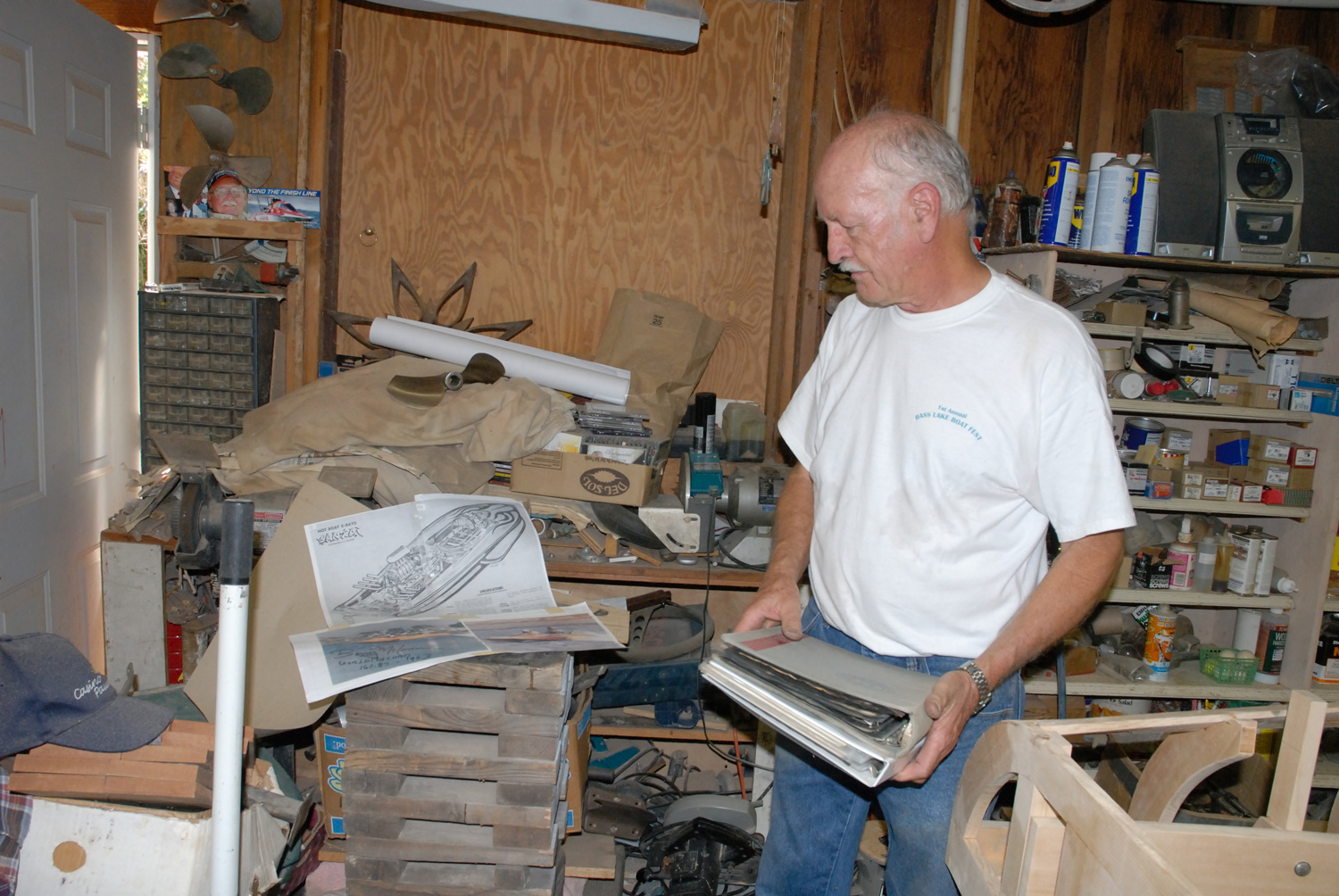 There weren't any plans, drawings or blueprints to go by. I do have an old 1970s Rich Hallett hull here but I only used it to study some of the basic construction techniques Rich used back then. The only thing we really had to go by were old photos of the boat. We knew the original "Banzai" was 19-feet long so we scaled the rest of the boat from that and divided it up into one-foot sections and went from there. We also knew how big Barry was back in 1963 and we knew the dimensions, length, width and height of a 1958 Chrysler motor so that's where we started from. We also knew that the V-Drive gearbox was under the seat where Barry sat and the side view photo of the boat told us about where the engine placement would be. 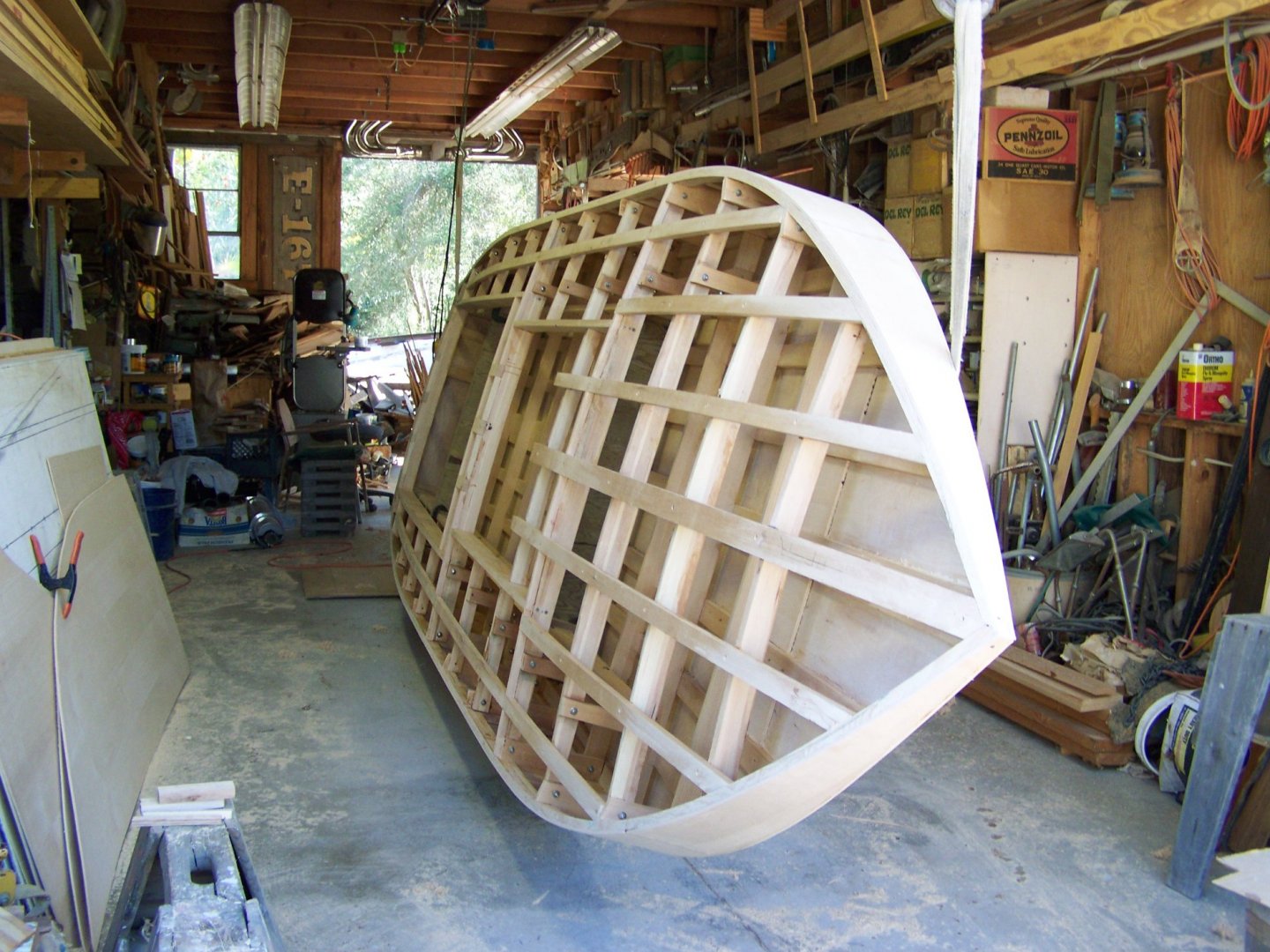 So how did you start the building project? 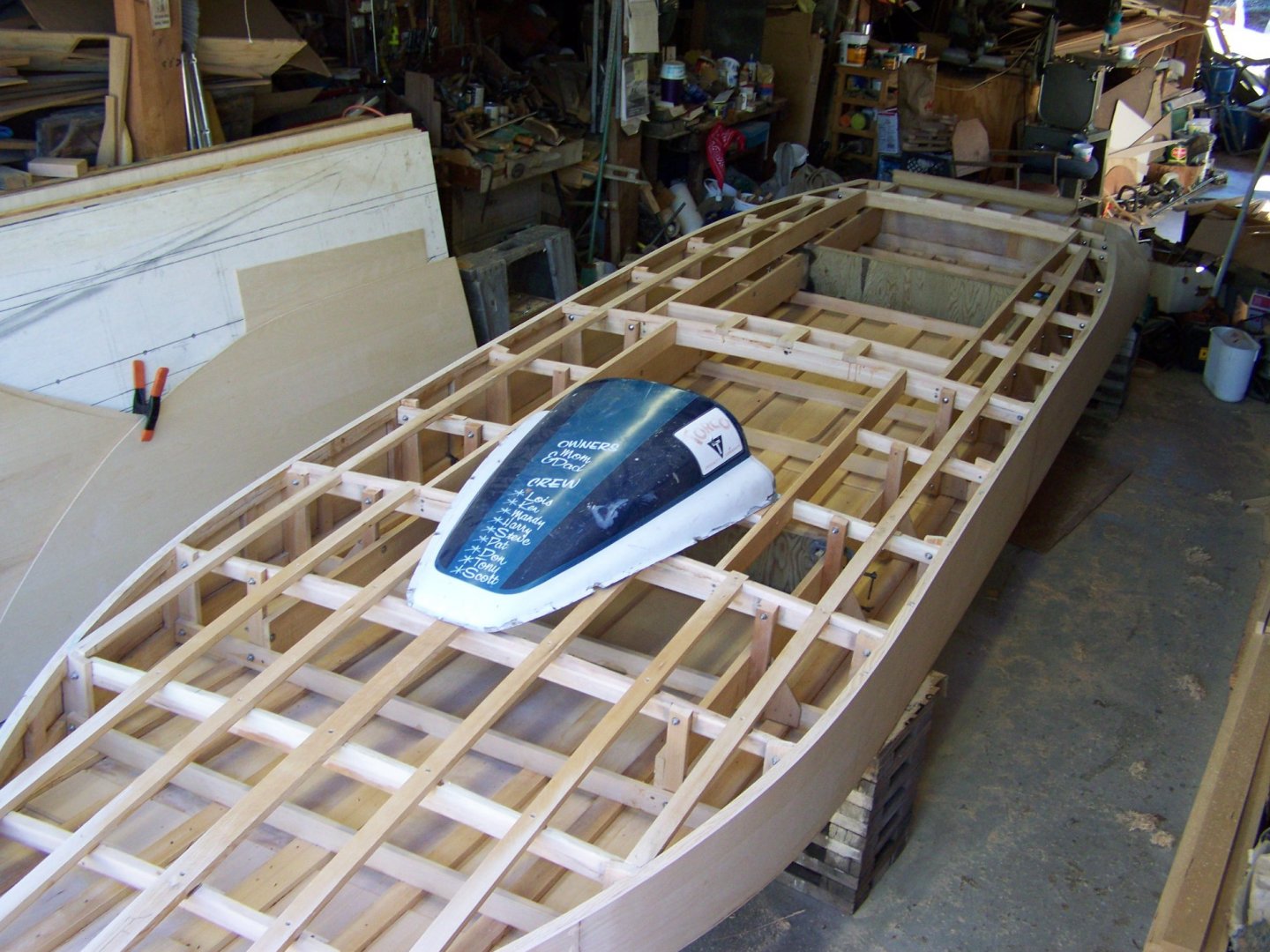 We transferred the information we knew into full size drawings on sheets of plywood. The actual build started from the bottom up and the boat upside down. The engine stringers were the most important part and we located them on a 36-inch center and held them in place with a jig. I also made the driver's cockpit 36-inches too. Once the stringers were secured I put the bottom frames on and went from there. 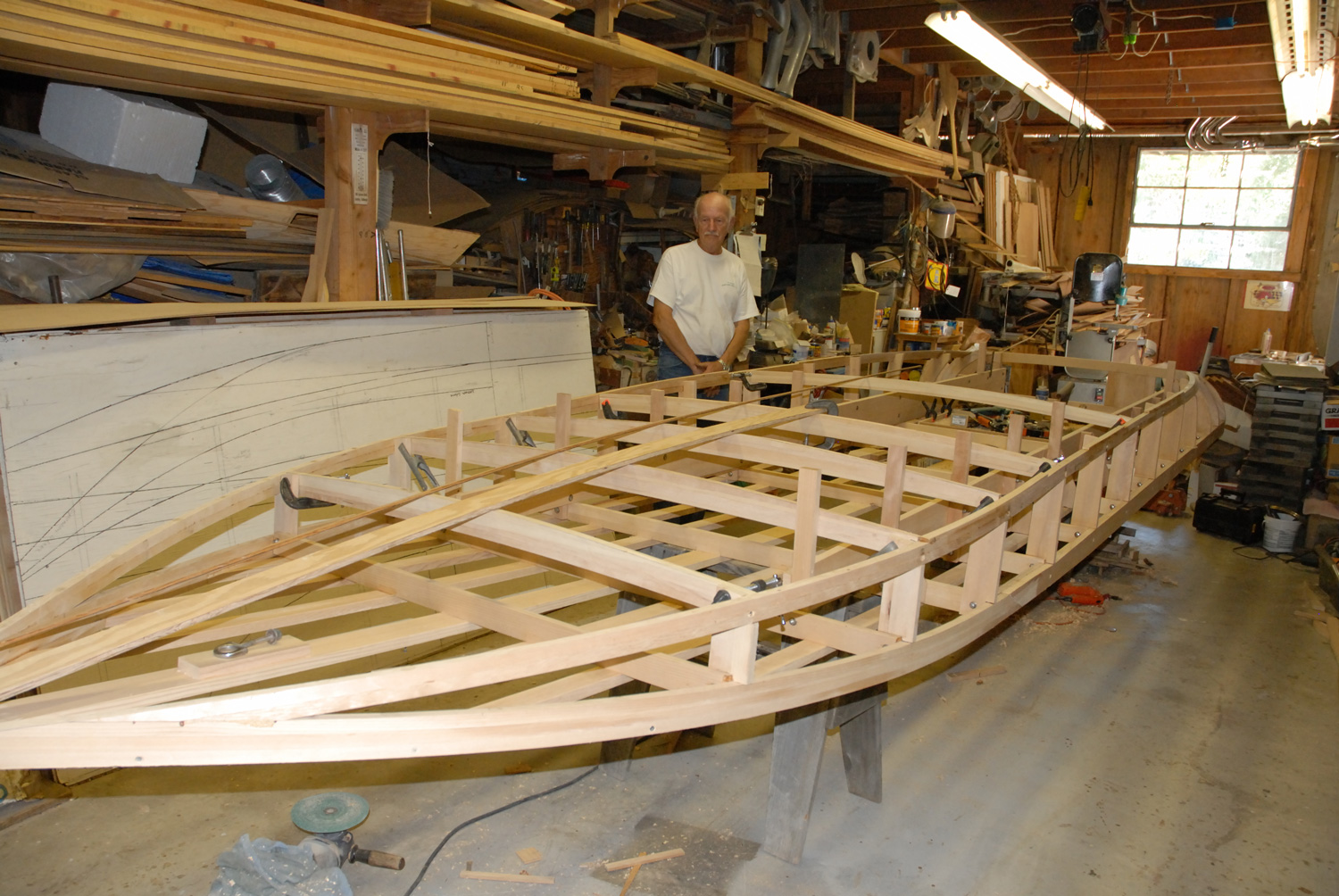 What kind of wood did you choose to use? 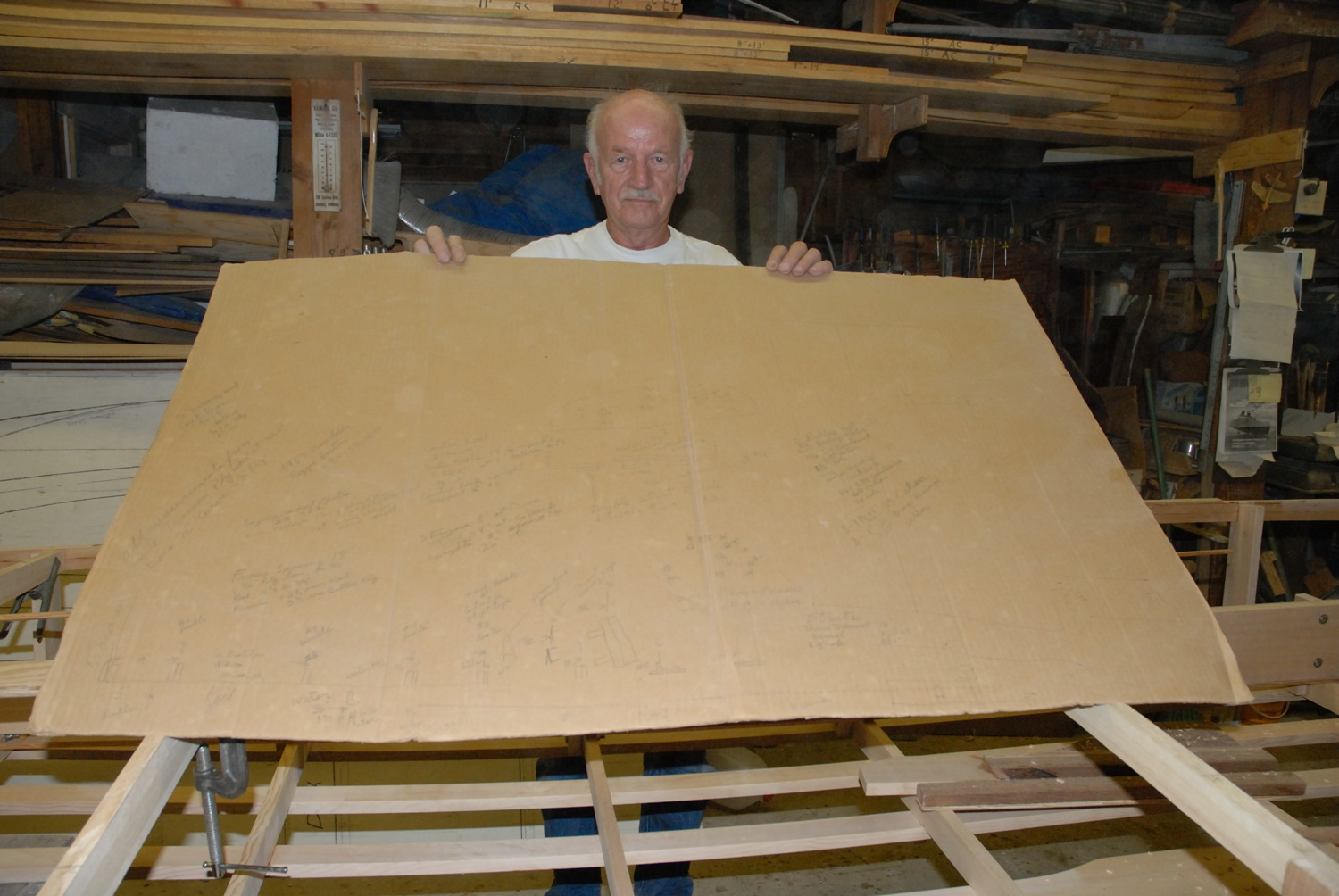 The solid lumber is all aircraft spruce and the plywood is all aircraft birch. These are the same materials that Rich Hallett would have used when he built "Banzai" about 60 years ago. These were also the traditional types of wood that most race boat builders were using for hydroplanes back in the 50s and 60s. The same is true for all the stainless steel screws, nails and bolts used in the construction. The only difference is a lot of the supplies used by Rich were war surplus. Barry still had a lot of the receipts from Rich where he went and purchased a bunch of nuts, bolts and screws at a war surplus store since inexpensive stainless steel aircraft hardware was in pretty plentiful supply back then. The same was true for other boat builders of that time too like Joe Mandella, Fred Wickens and Dave Miller.

You've now got the basic hull pretty much completed with just a little putty and sanding work left to do. What's the next step? 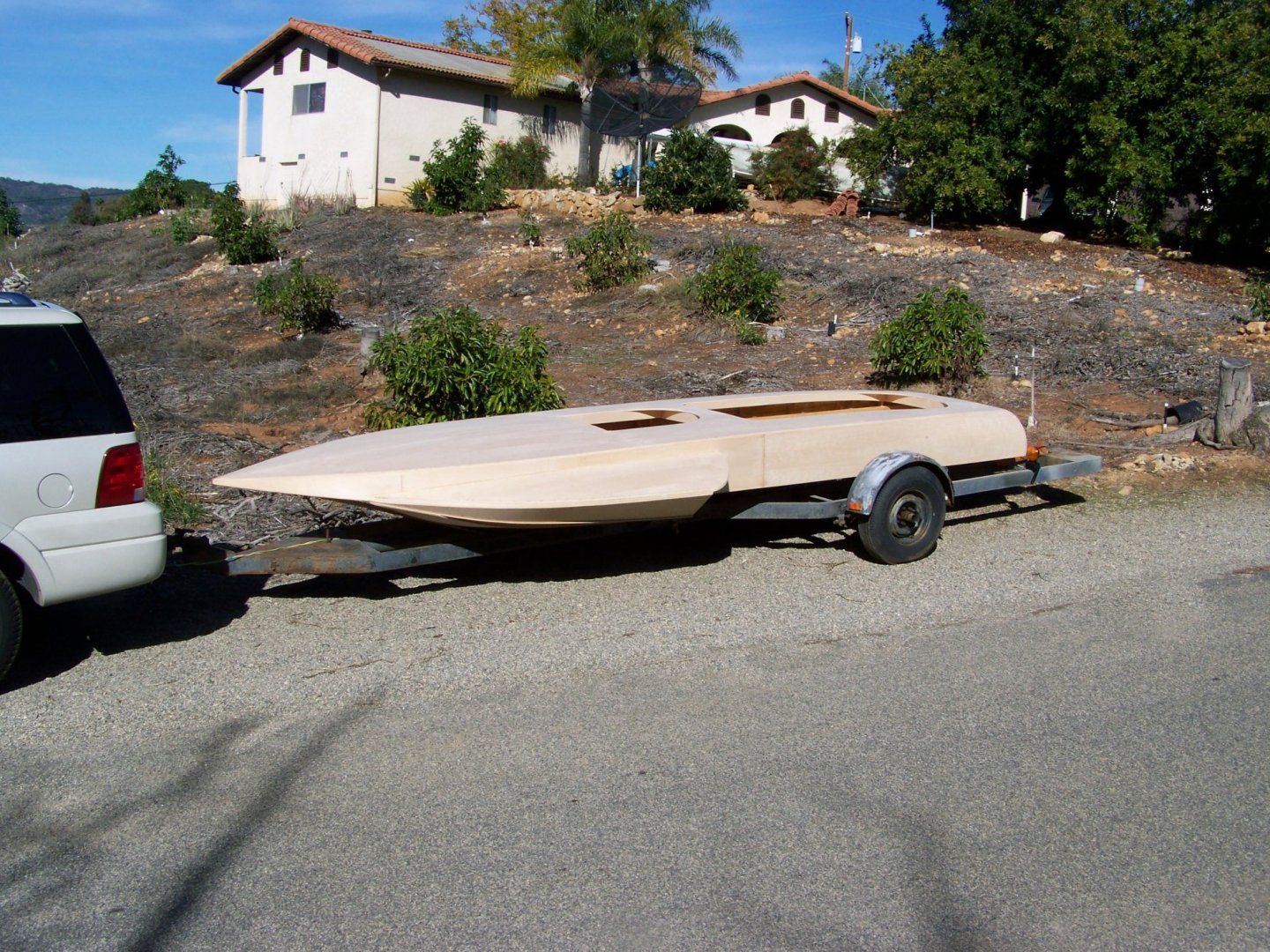 My work is essentially finished. The bare hull was put on a trailer and transported to another shop for fiberglass, finish work, paint and eventual rigging. We still have a number of photos of the original “Banazi” so it won’t be too difficult to make it match the real thing. We also have a pretty good line on an authentic 392 Chrysler Hemi. The plan is to have a running engine so the boat could make an exhibition pass or two,

Any guess as to when the "Banzai" project might be complete and see it in the water? 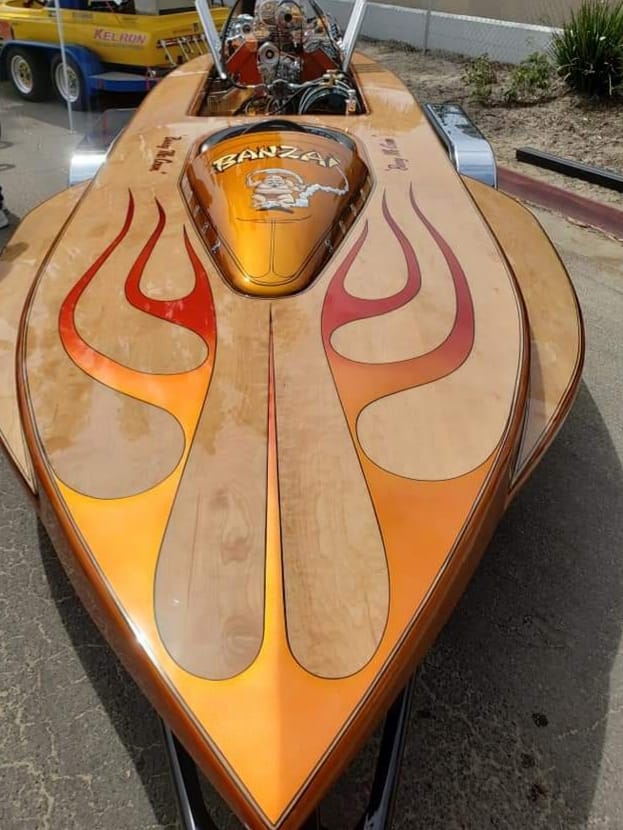 I hope it’s sooner than later. Restorations like this can become costly and finances are usually the major hurdle in getting the project done.

On a totally different subject, when someone approaches you about restoring an old boat, especially if they want to replace a wood deck, how do you go about it?

Before any work starts, I have a form I make them fill out with all the necessary dimensions from the existing hull so I have something to work from. Then, I take lots of photos since I can use them for reference and scaling purposes if needed. You can never have too much information to work with. Once that is done, then it's time to get to work and remove the deck whether it's wood or fiberglass. If I can, I still like to retain critical portions of the old deck like the dash panel which makes it easier to make a pattern. It's also very critical to note the shape of the cap line where the deck and hull are joined. A cap line is almost like a fingerprint -- no two boat brands are exactly alike unless they came out of the same mold. One of the most reliable ways of identifying an old boat is by its cap line configuration. They are usually pretty distinct and unique from manufacturer to manufacturer.

Once the deck is off and you've got dimensions to work from, what's the next step?

Then it's time to get inside the hull and start to build the new deck frames and the cockpit side rails. It's kind of like a skeleton, you've got to build the inside support before you put on the outer skin.

Who decides what wood to use?

In most cases, the customer has some idea of what they want. The most common choice is mahogany over marine plywood since that was what most wood decks were like back in the 50s and 60s. It someone wanted to be real fancy, monkey pod was pretty popular back then but it seems to be almost impossible to get that wood any more. I suppose if someone wanted it bad enough and was willing to pay the price, you could probably special order a monkey pod veneer which would look very nice.

What are some of the pitfalls people should be aware of before a start a restoration project? 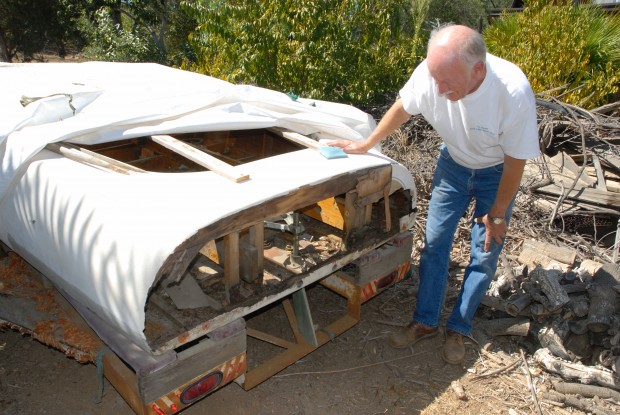 They always need to check the boat out carefully before they buy it. The exterior condition isn't nearly as important as its structural integrity. Gelcoat and paint are pretty easy to fix. What you need to pay attention to is the condition of the stringers and the transom. If they are junk, they can be cut out and replaced, but it drives the cost of doing the restoration up accordingly. Always check out the bulkheads to make sure the wood isn't rotted. If it is, it will have to be replaced too. One thing that often seems to slip by a buyer is the condition of the floor. Most flatbottoms have a plywood floor with a layer of fiberglass on top. What I see a lot of in older boats is the bond between the glass and plywood have separated. The only way to fix that is by removing the glass and starting from scratch. Again, that can be costly. And it's also important to make repairs in their proper sequence. Don't put a new deck on an old boat and then find out that work still needs to be done to the bulkheads or the floor. Get all that out of the way when the old deck has been removed but before the new deck goes on.

What's it normally cost to do a basic new deck renovation for a flatbottom?

They all vary a little bit depending on materials and time, but generally a complete deck removal and installation of a new wood deck is about $4,000 to $5,000.. Remember, that's for a bare wood deck that still needs to be finished, glassed and painted so the bills don't stop there. It might cost another $3,000 or $4,000 after that to get exactly what you want.

You've been at this for over sixty years, any thoughts of retiring?

Not a chance, I've still got a lot of projects waiting to get done.
Reactions: monkeyswrench, Blow It Up, Backlash and 13 others

Jesus, amazing skills.
He is the master of wood boats for sure!
I believe this is the finished product?(ATTACH=full]929967[/ATTACH] 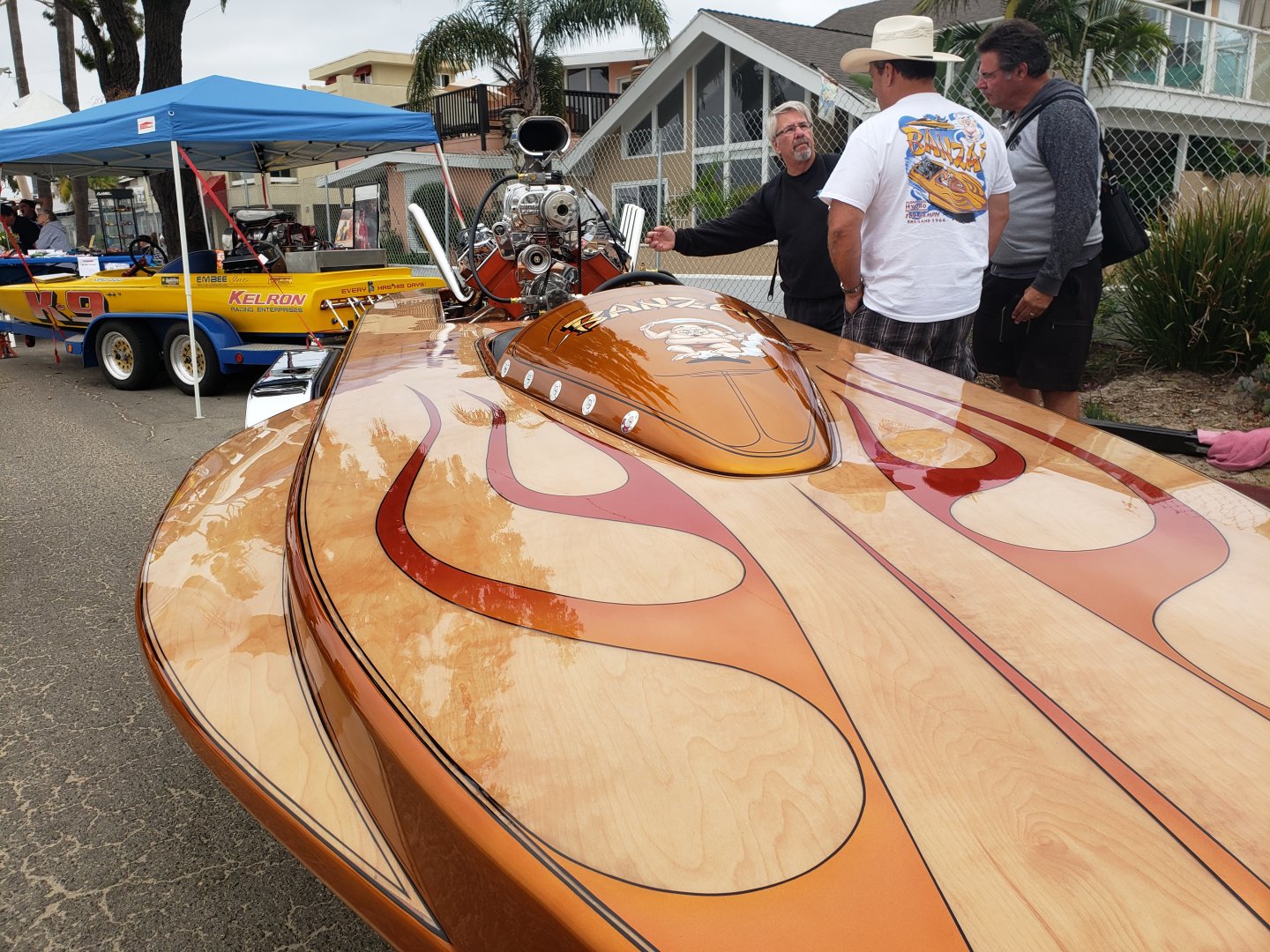 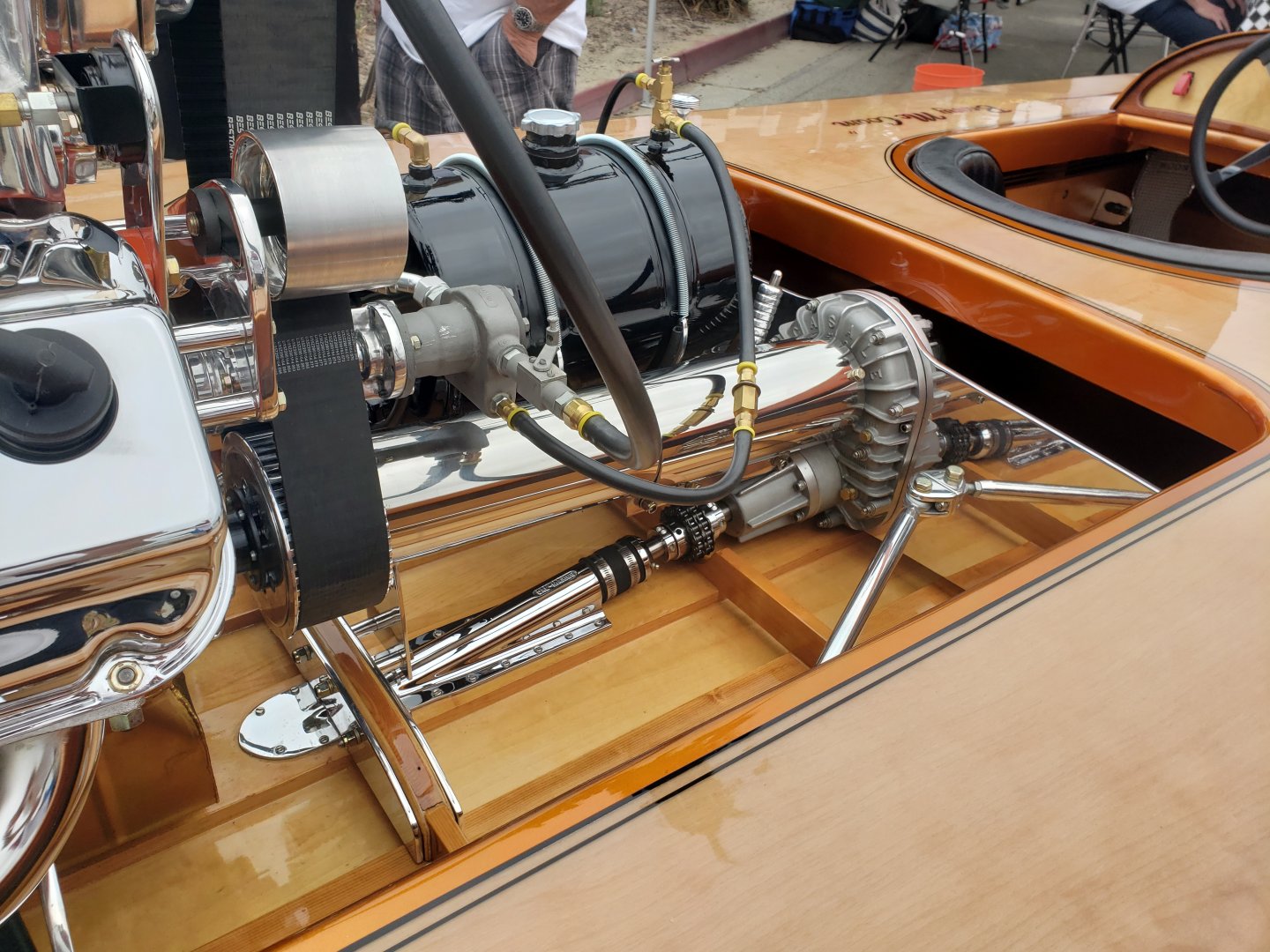 OMG, that is beautiful!
Stunning!
You must log in or register to reply here.