I have a famous line that I've used my whole life that basically amounts to "Don't try to get something that is good at everything, because you will end up with something that isn't great at anything." I can honestly say that has served me well my whole life, right up until I crossed paths with the VTX. 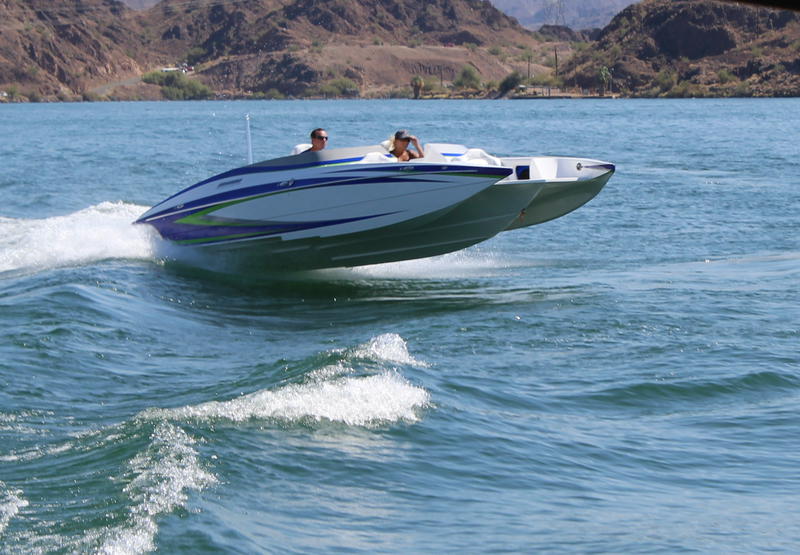 Mike Willen set out on a goal to create a boat that was a true "dual sport" boat. He wanted something that he could take his family out to the lake with, and teach his kids how to water ski, wake board, and wake surf, yet when it comes to performance it still has to hold true to the Howard name. 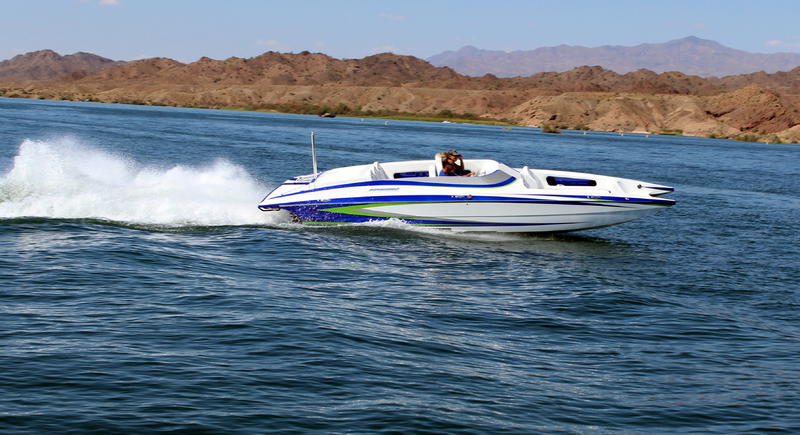 The closest the performance boat world has ever seen to a true dual purpose boat would have to be the modern era "Deck." Boats like the Howard 288 (and others) are able to pull big numbers with moderate power (90 mph in the case of the 288 with a Merc 600), yet still have enough seating and storage for a comfortable, full day out on the lake. As with anything all of them are going to have an Achilles Heel. Modern decks all things considered are pretty horrible tow boats, especially if you have young kids that would require slow planing speeds to teach them how to ski, wakeboard, tube, or wake surf. This was the void the VTX is to fill.

I made my way to the Nautical and got my first look of the first completed VTX. Previous to this I had only seen the plug at Howard Boats. From an aesthetics point of view the boat is just dead sexy. It shares a lot of the same lines as it's big brother the 288, which has always been a crowd pleaser. 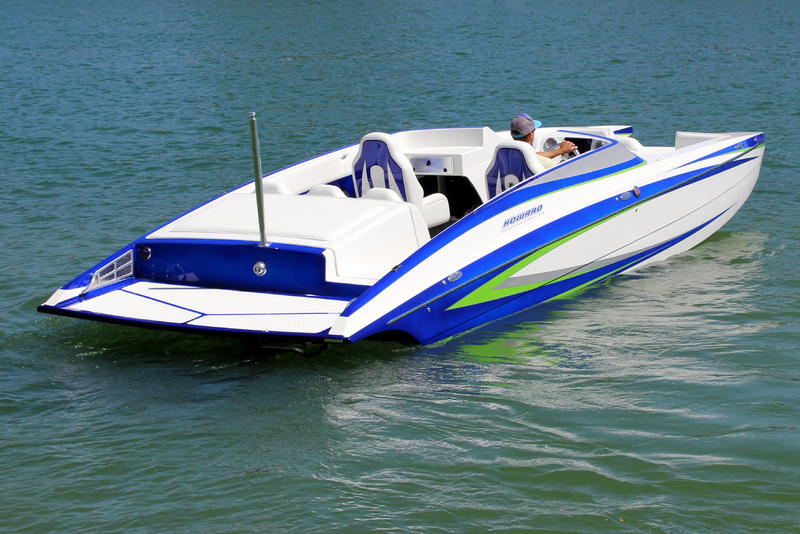 From a side profile Howard nailed it. They maintained the sleek lines of the 288, and it kept the same low profile looks that made the boat infamous. It is a little deceiving to the eyes, because of the profile it looks like a much bigger boat than a twenty five. 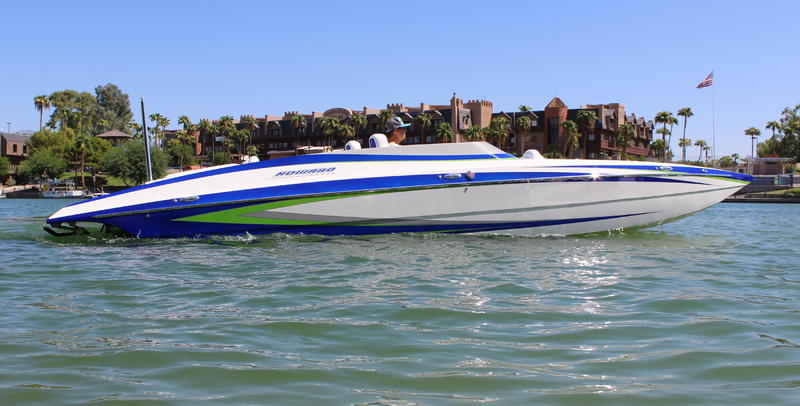 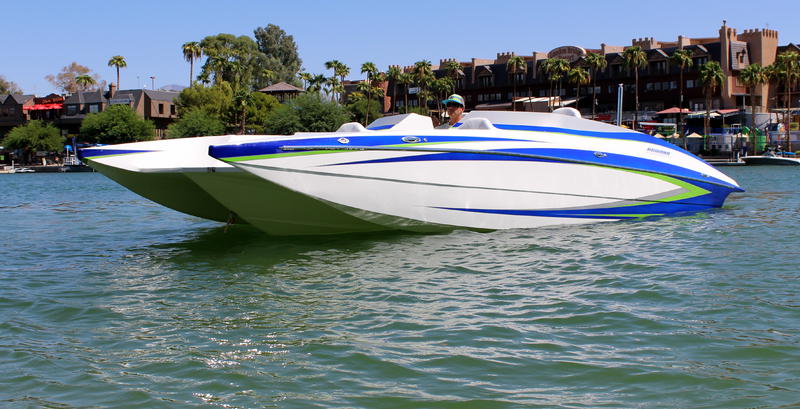 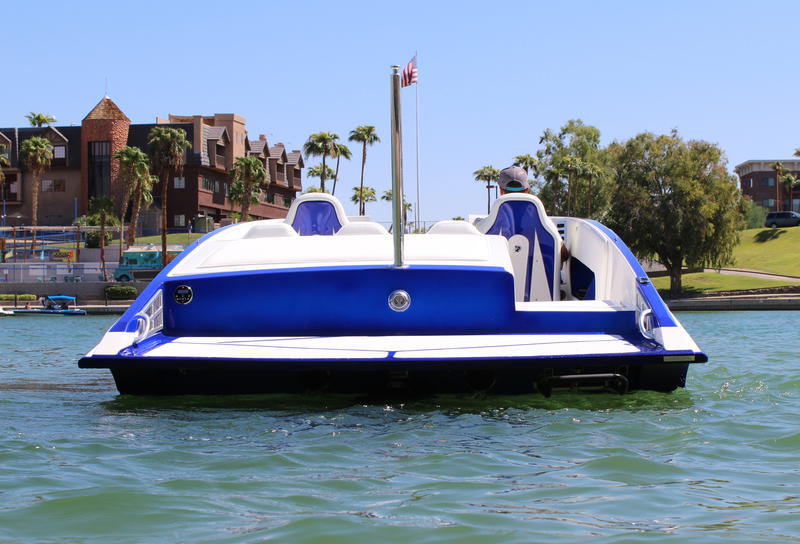 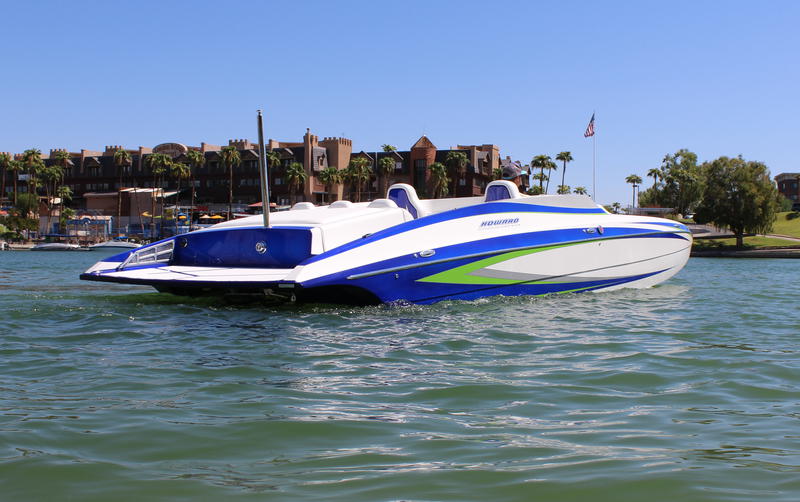 It's only when you see it from the front dead on that you realize that this boat isn't a conventional tunnel bottom like it's big brother. As you can see in the pic, unlike most the other Vee bottoms with sponsons, these aren't just there to open up cockpit space. The sponsons actually run all the way down to the water line and are in fact part of the running surface and do play a part in how the boat runs. I will cover all that in the performance section, but it should be noted for later. 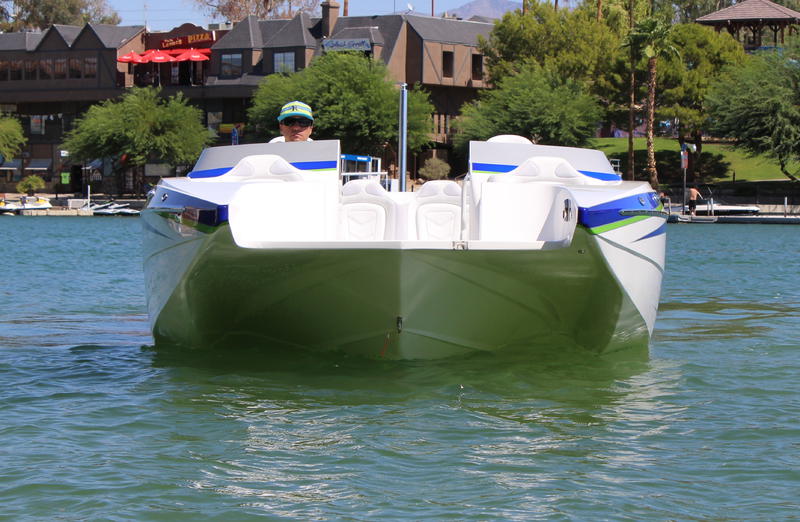 I jumped in the boat to quickly go through the interior and features. It was being touted by a lot of users online that this was going to be an "Entry Level" Howard, there's nothing entry level about it that I could see. The boat features a full innerliner, and everything from bow to stern was first class which is typical of Howard. The interior in this one was a little toned down compared to some of the newer 288's that have come out of there, but that's entirely up to the buyer and how they want that done, as it is with all custom boats. 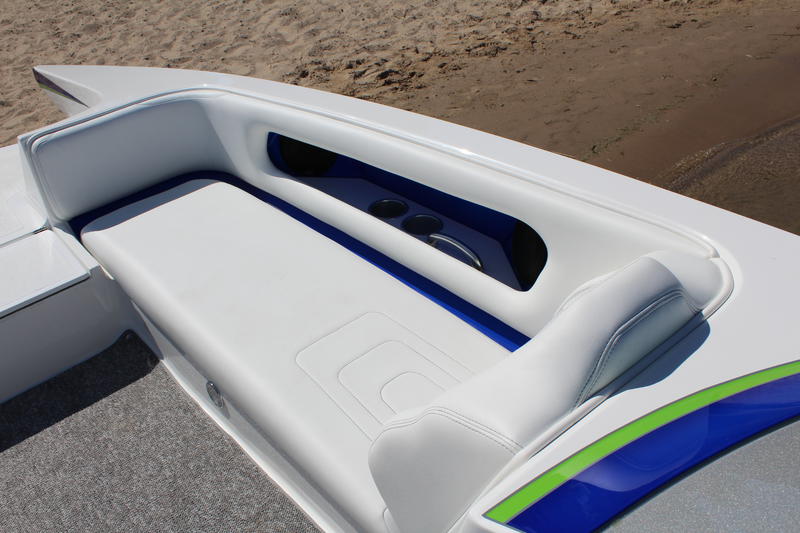 The helm featured Vessel View and Livorsi Vantage View Gauges that have their own recalls. Steering is full hydraulic at the helm that routes back to a sea star internal hydraulic system that's all under the hatch. That's a very nice feature and comes standard on the new 255. It basically gives you full hydraulic steering (with no cable slack) without having to deal with all of the external hardware. This system isn't setup for ultra high speeds, and if a person decides they want to go with a larger engine package that would put the boat in the 80's or higher they would install the external rams. 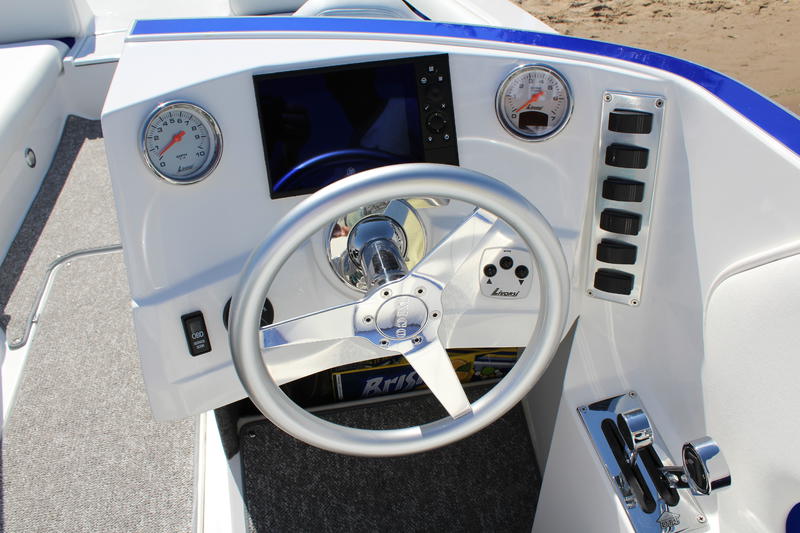 The boat has quite a few things that surprised me (especially given the price point), Fiberglass seat backs, as well as fiberglass gunnel inserts that were all gel coated to match the boat. While I didn't see the boat at night, it's my understanding that there is hidden (indirect) LED lighting everywhere in the boat that comes standard as well. 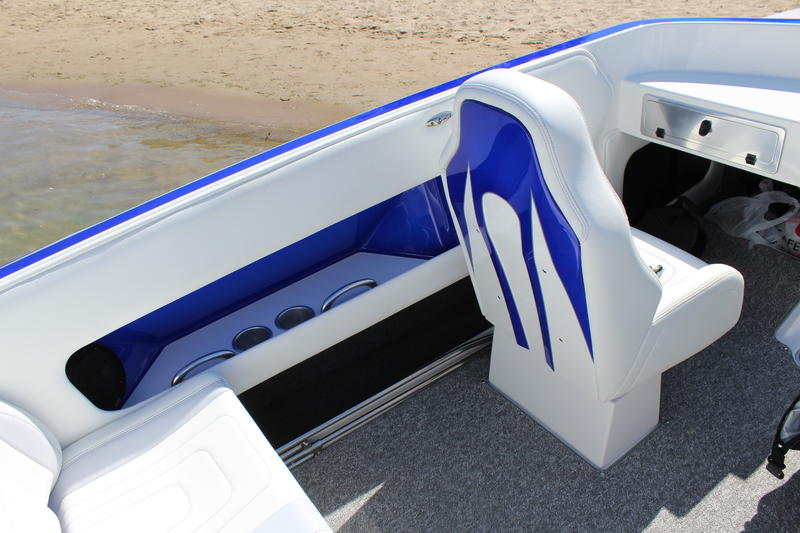 A nice touch on both sides of the boat are these large gunnel storage areas. You can easily place larger things like water skis in here and out of the way while you are out on the water. I didn't get a picture of it, but the ski locker hatch is over sized as well and will accommodate multiple wake boards without an issue. 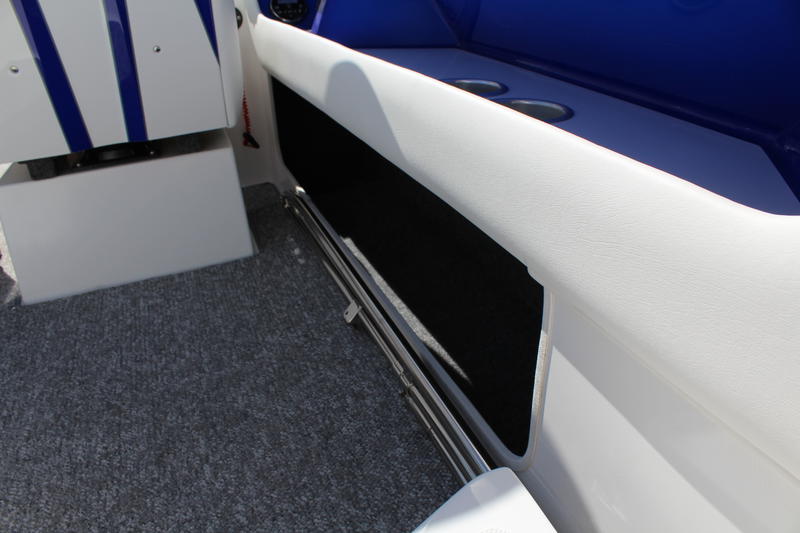 Everything from the backs of the front seats towards the stern is identical to a Howard 288. It's the same rear seats, walk off, engine hatch and swim step. 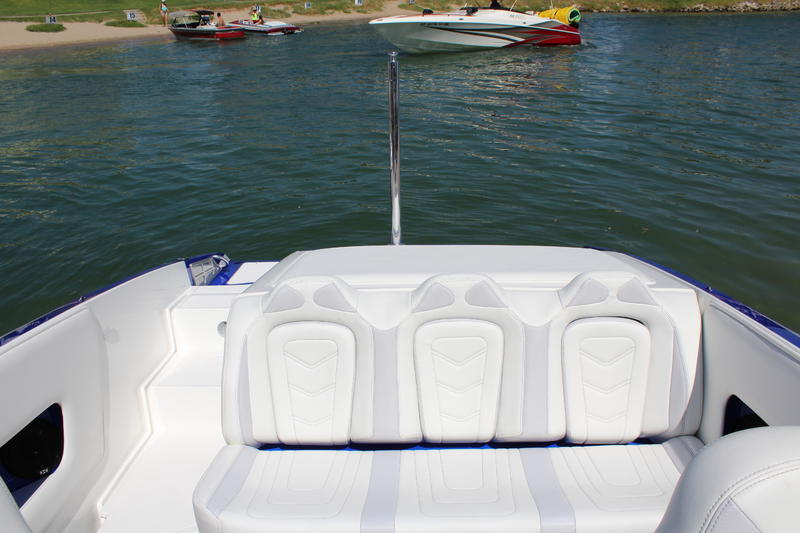 The engine hatch that raises the entire rear of the boat is a favorite among enthusiasts and mechanics alike, it allows for a completely hidden bimini, and easy access to everything in the engine bay (fenders, cooler etc..). It should be noted that this was the first boat and was finished the night before the regatta. The fenders holding the cooler in place will be replaced by small studs. The Fenders themselves would normally be placed in their holders. 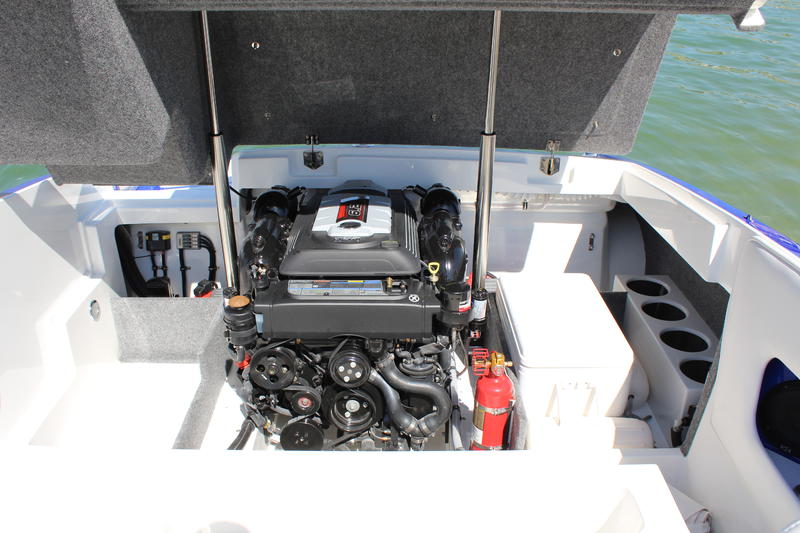 The over sized swim platform shared with the 288 covers the entire drive so there's no concerns about the prop with kids jumping off, or preparing for tow sports. 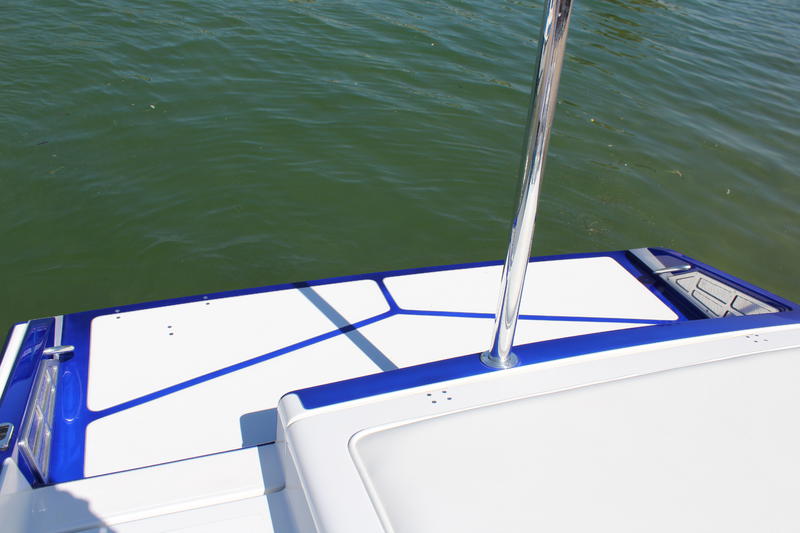 We don't generally focus on things like how easy would it be to teach a kid how to ski behind the boat? How hard could you whip a tube? Could you actually wake surf behind it?

Being that this is a dual purpose boat, I decided to try and focus a little more on that in this review. We did however run into a small issue with regard to that, which might have turned out be a blessing in disguise. The day that we took the 255 VTX out, Lake Havasu decided to throw it a curve ball in the form of 25 mph winds. I am hoping to get another crack at the 255 in the near future with a full load of people (ballast) to show wake shapes, and speeds under glass conditions. This review was performed with Mike Willen, myself, a half tank of fuel in extremely rough water.

The first video I'm going to show you is just the front view of the boat as we exited Thompson Bay into the Basin. I left a few seconds of intro on the video just to show you how rough the water actually is coming into the bay. The important notes from this video is that never once did the boat take a wave over the bow even when heading out into this disaster. The other part worth noting is this boat comes on plane so quickly, smoothly, and with almost no bow rise, that while facing forward it's actually almost impossible to tell when it actually comes on plane!


Here is the same video a little longer that shows the boat coming on plane with cameras facing front and back. This boat comes on plane in under two seconds, with less than half throttle. When you factor in that this is a full size 25+' Deck boat with seating for ten and storage for everything you want to take with you that's absolutely incredible! I would venture to say it's the fastest planing deckboat (with no close second) in this size range period.


In this next video we go through a series of sharp and sweeping turns at various speeds. What you should pay attention to is the fact that there is no prop blow out no matter how hard we turn, even when adding throttle and trying to blow it out. When we cross our own wakes you can see how smoothly the boat transitions across them. We hit our own wakes at a variety of different angles from straight on, so quartering and the boat takes them all in stride. You should also be taking note to the water conditions and the horizon on the front view while so you can see how the boat is handling the wind chop on the water during the straight sections.


After we did our turning and some straight line tests at various rpm's to measure prop slips we made our way to the North side of the island to do a speed run. The boat went 62 MPH @ 4900 RPM with a box stock Bravo 22. The 6.2 actually has an operating range of 5000 - 5400 RPM (350 HP) which means there is another 2-3 mph in the boat easily without too much trouble after they try a few different props.


Howard didn't just accomplish their goal with this boat they surpassed it. This is a 25.5' Deck Boat that gets on plane as fast as a tournament boat (effortlessly). We took it out in about the worst conditions fathomable (especially for a tow boat), and never once did we get beat up, jolted, or even were uncomfortable for that matter.

The front facing camera is actually down on the deck just above the front passenger head rest (considerably lower than my line of site in the boat) and never once did we lose the horizon even at that vantage point. Then when it came time to see what kind of moxy she's got, in typical Howard fashion it rose to the occasion and put up a huge # for a boat this size with minimal Horsepower.

There isn't a tournament boat that I'm aware of that would've gone out in those conditions, let alone lay down a 60+ mph number with a 350. If that's not enough for you the fuel economy on this boat is going to be absolutely unreal. Small blocks already sip fuel, but at a cruising speed of 33 mph you are turning 2800 RPM's!! When they get a little better prop on this thing I'd bet that 33 turns into 35-36 mph as well. 3500 RPM yielded 44 mph. With a 65 gallon fuel capacity you are going to enjoy weekends (plural) before having to fuel again, or if you are a Mead / Powell kind of boater you can imagine the range you could get with this setup.

This boat is incredibly nimble for it's size, and at the same time extremely forgiving to drive (a very rare combination). On the top end the boat wasn't trim sensitive at all which is a huge bonus. Anybody can get in this boat and drive it and have fun without having to be an expert on the sticks.

When Mike described to me the bottom he called it a 70% Vee and a 30% Cat. With the sponsons as low as they are in the front, and the way that it bleeds the air through the tunnels and then out the sides of the back I'm inclined to agree with him. The faster you go the lighter the boat gets (which also adds to the fun of driving). I'm not going to go so far as to say it gives you that "packing air" feeling of a tunnel, but I will say it doesn't feel like a typical Vee either. With this motor we were able to get 62 mph out of it, and in that water the boat really showed it's colors and proved without a shadow of a doubt that she was part Cat. The ride was amazing given the conditions. I'd wager again with a light weight higher HP package this thing would be an unbelievable performance boat that can pull double duty with the kids.

Options on this boat

(*Note 1/2 Cap will not be available on the 255 which is why it is not included in the list. The Reviewed boat did have it)