When Valentine's Day weekend arrived, Jason and Laurie Moe were in a HURRY to wave goodbye to Washington and cross the country with their son Colton. If their daughter Katelin wasn't on a snowboarding expedition across Japan, no doubt, she would be as anxious as her little brother and parents were, to get to the Outerlimits Powerboats in-water display at the Miami International Boat Show (MIBS). Why?

One of the sweetest of sweet Valentine's Day delights was awaiting the Moe family in the Magic City, and if a card came attached... it might have read:


Roses are red.
Violets are blue.
If you head to Pier 3,
A sweet twin-hull treat,
Will be waiting for you.​
Needless to say, it was love at first sight when the Moes locked eyes with their 46-foot carbon-fiber, canopied Outerlimits Hurry Up!!!. 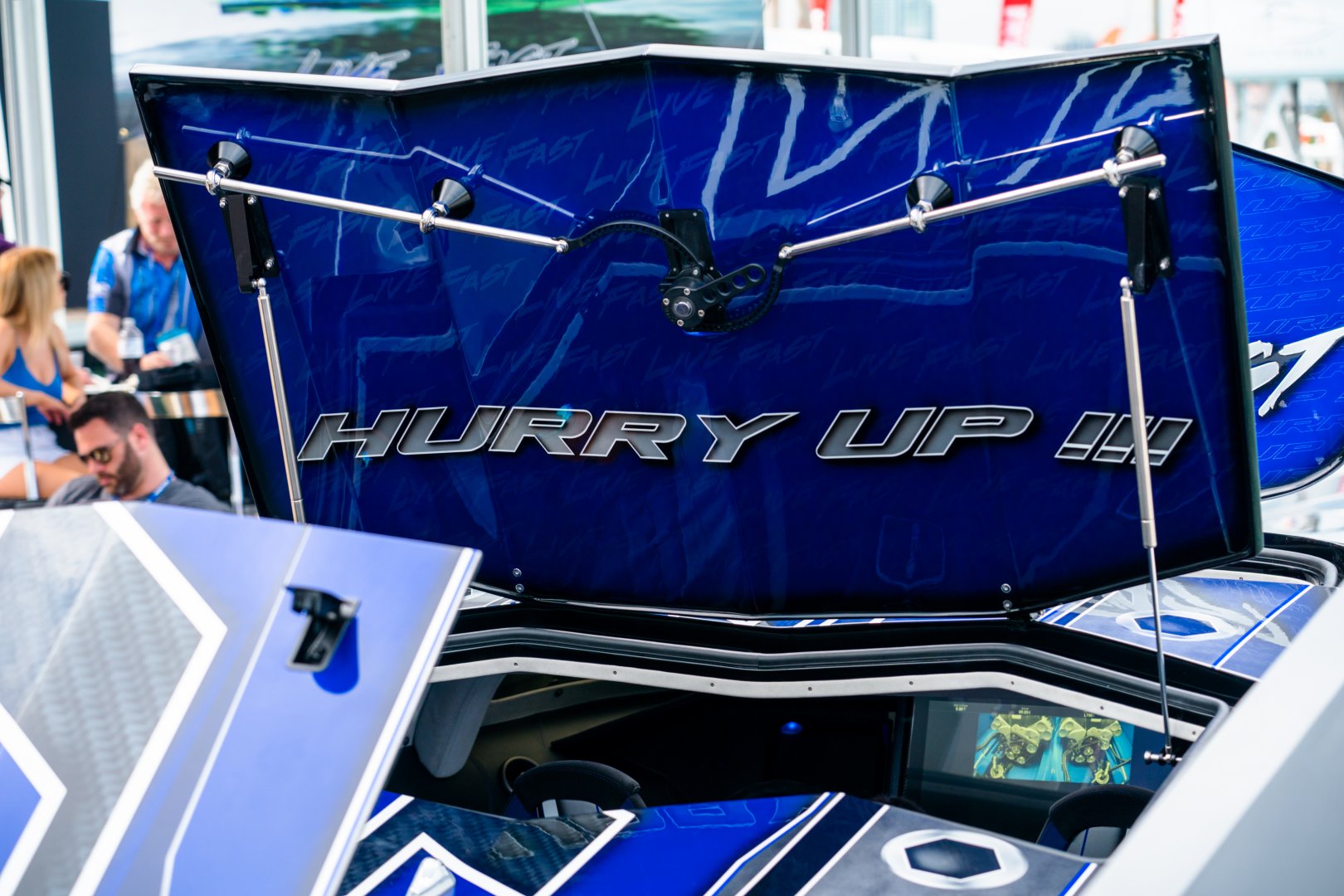 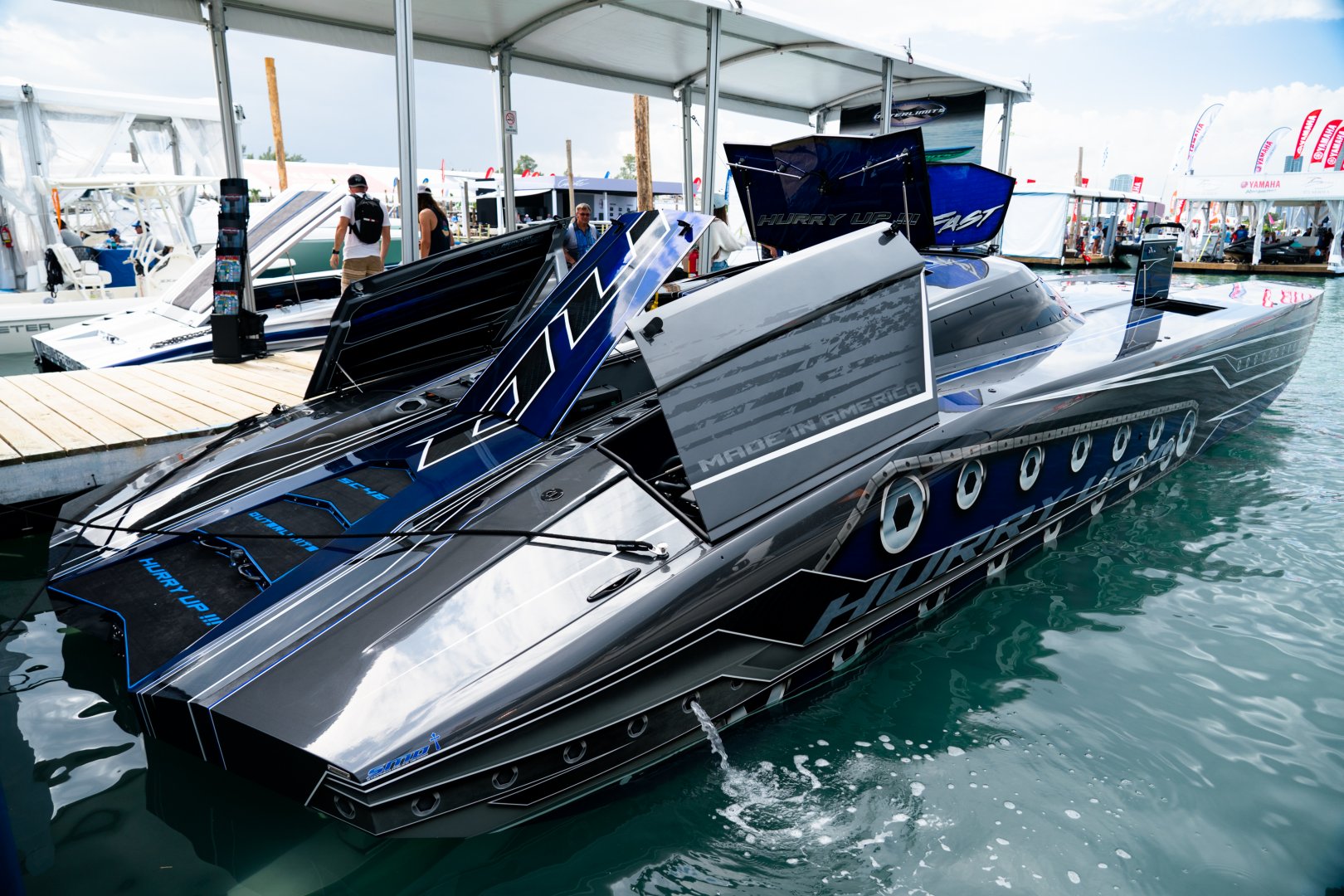 Prior to the show, I had never personally met the Moes, but by the end of the weekend, I can tell you, the family and their conversation-piece catamaran... are both one-of-a-kind cool! The unforeseen link to meeting was thanks to their Outerlimits boating buddy, and owner of Seabound Yachts international boat brokerage, Jeremy Cohen.

Standing in line for the Bayfront Park ferry directly behind Cohen, I noticed his orange shirt from the 1,000 Islands Charity Poker Run. I have the same shirt from attending the event last July, which led us to talking. Turns out he's from Clayton, New York, home of the picture-perfect poker run; but even better, he was in line with the Moes.

While boarding, Cohen graciously introduced me and RDP head photographer Austin Foley, who was in town covering the show An impromptu 40-minute conversation followed while crossing Biscayne Bay, and upon docking in downtown, nothing was more evident than the Moe's passion for extracting... both speed from their boats and soil from the foundation. As owners of Elk Heights Excavation, LLC. in Maple Valley, Washington, the poweboat buffs have a long-standing relationship with heavy haulin'. 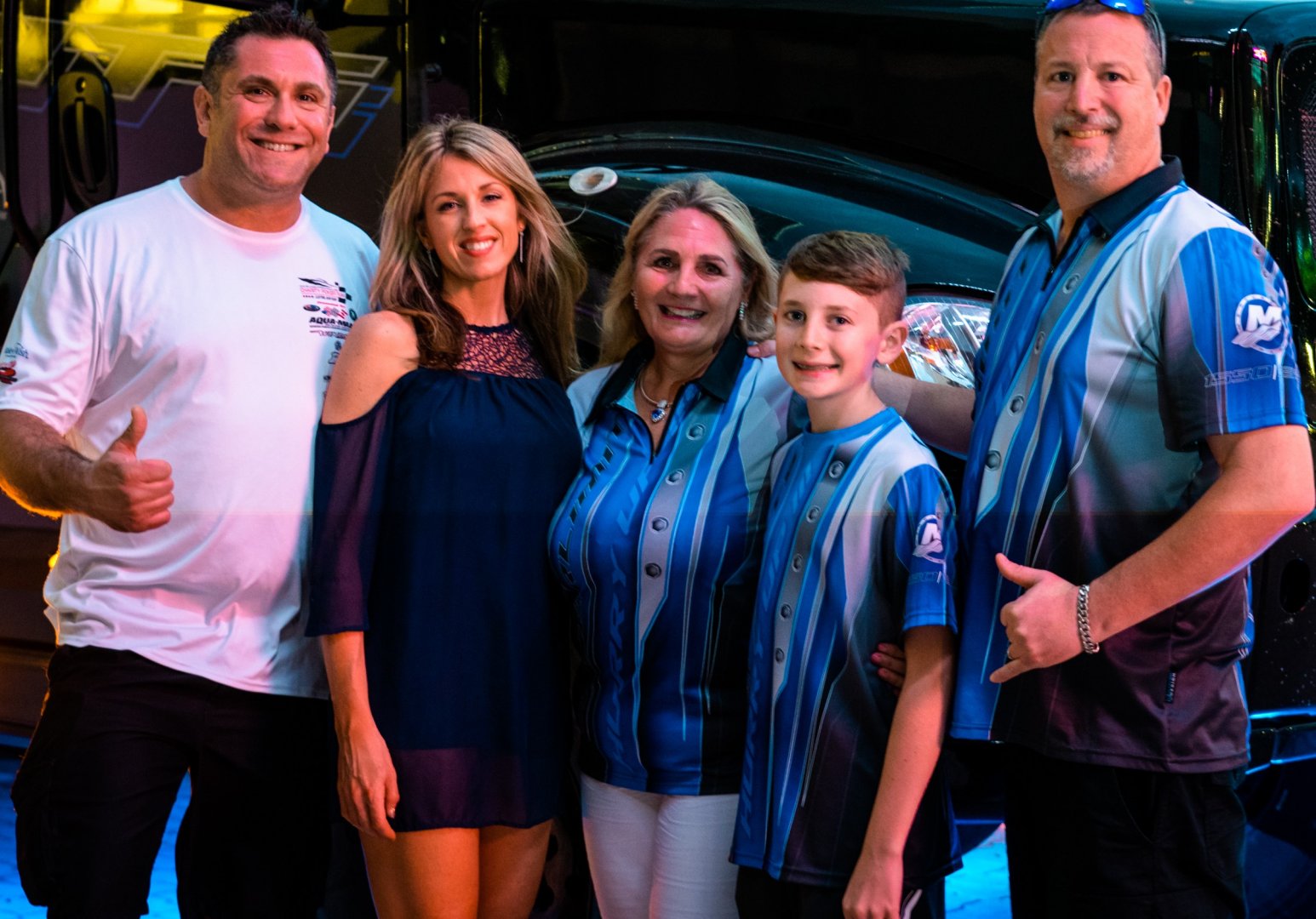 Jason's initial marriage proposal to Laurie actually took place inside the gravel truck she was driving, less than 15 minutes after meeting. Laurie suggested a dinner date, before setting the church date and sending out wedding invitations. Now nearing two decades together, the dump truck matrimony pitch probably would have worked!

Since Laurie is no stranger to running an eight-axle rig, to find her behind the wheel of their SportChasis at the boat ramp, or with her co-pilot Colton en-route to different poker runs across the USA, should not surprise. When she mentioned the land warrior was parked out front of the Intercontinental Hotel just a ten minute hike from the ferry (it wouldn't fit in the garage)... well, that was probably the turning point when Austin and I became "those new friends you can't get rid of" (joking).

We proceeded to tag along back to the hotel to snap a few pictures. Gargantuan in size, the SportChasis with the bright lights, big city backdrop was beautiful, but we quickly bid farewell, because Saturday morning it was back to the docks to the Outerlimits booth and time for unearthing the good dirt on Hurry Up!!!. 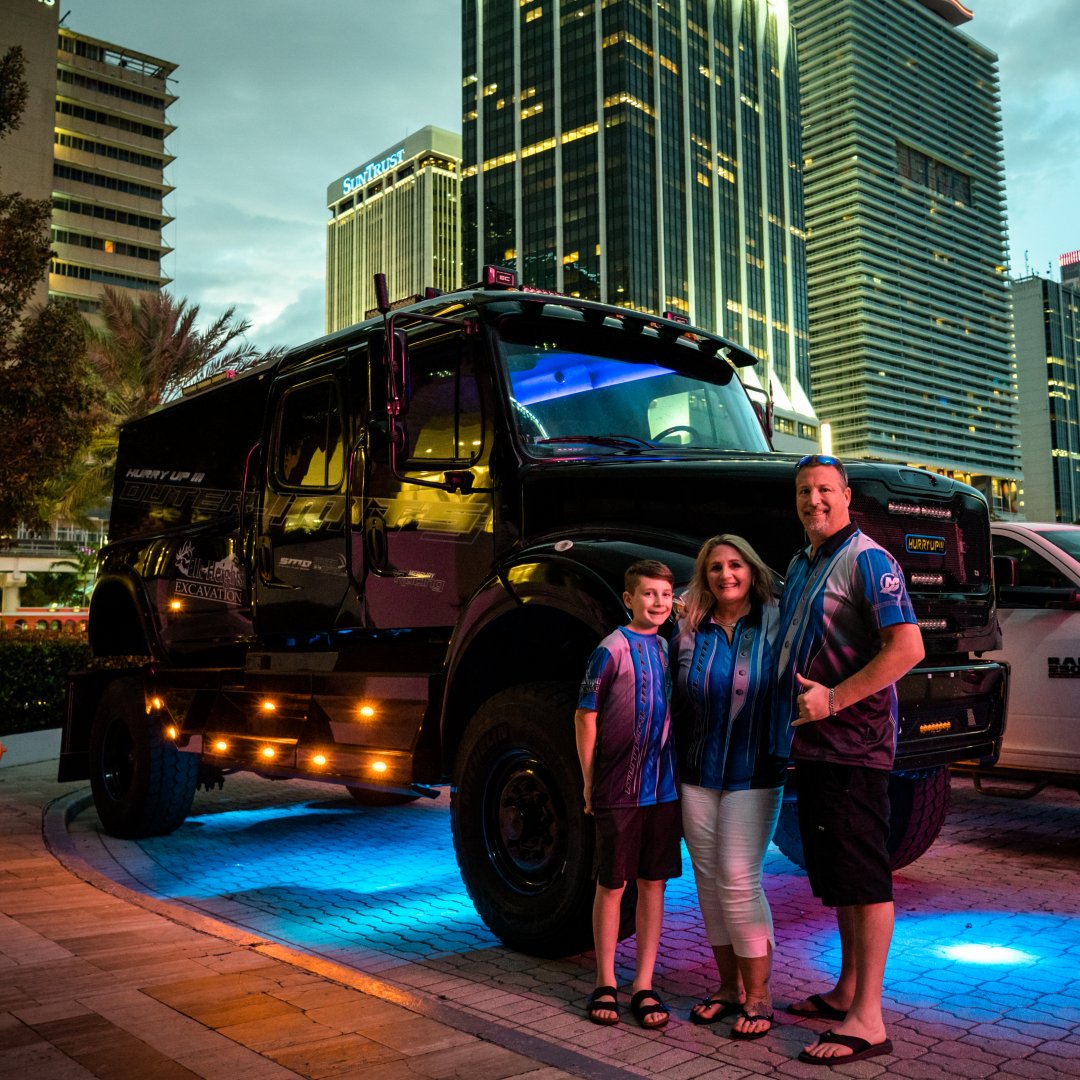 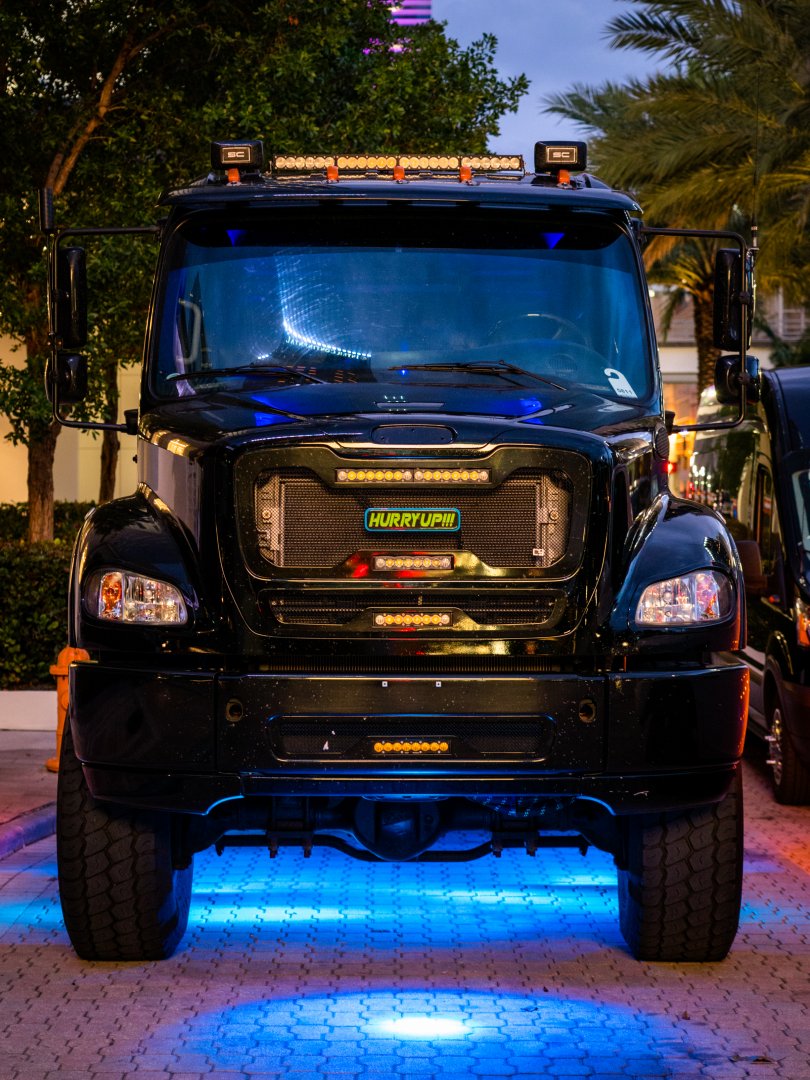 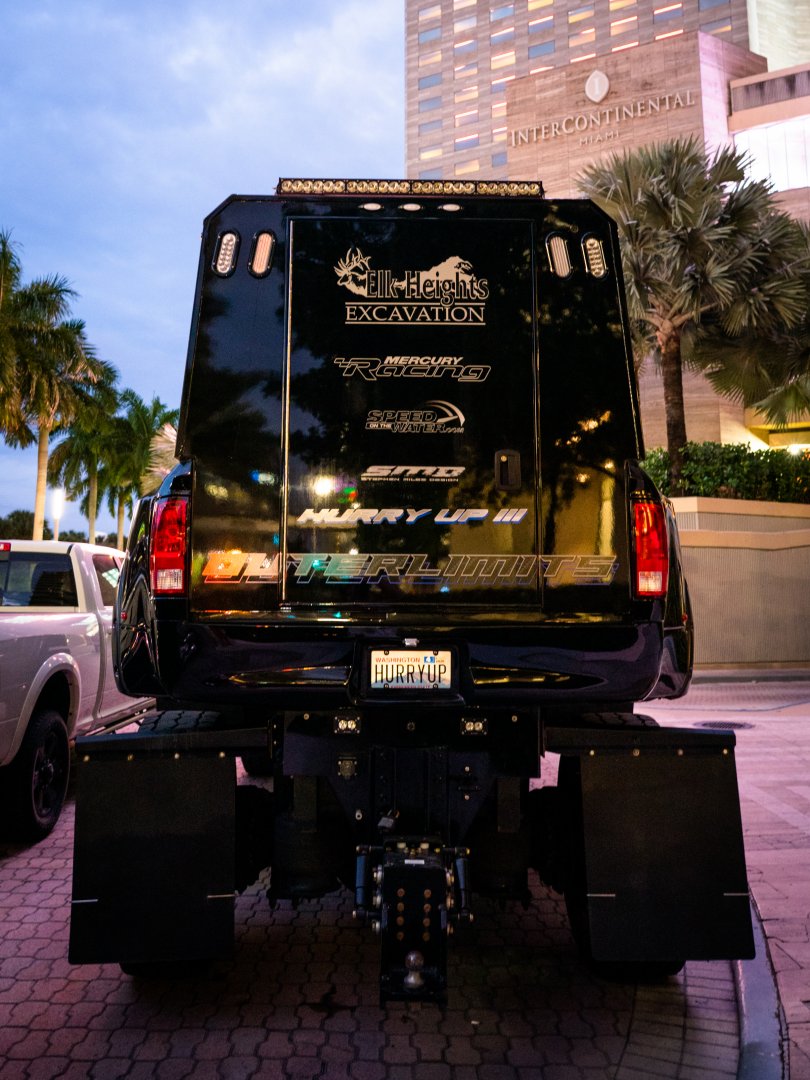 In looking back, the Moes have been loyal Outerlimits owners since first meeting Mike Fiore in early 2000s at the Fort Lauderdale Show. "Mike immediately made us feel like part of the family, at a time when other manufacturers were less than cordial while shopping around, and ready to buy a high-performance boat," noted Laurie. Today the family is so appreciative of the entire Bristol, Rhode Island, Outerlimits Powerboats crew including Dan, Jason and Steve. 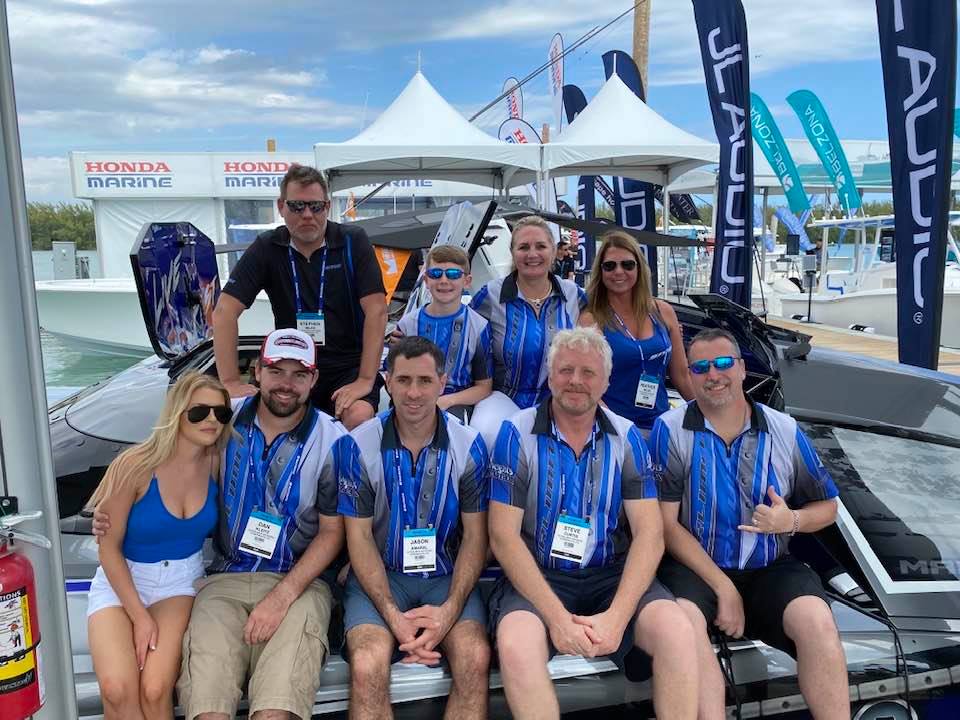 With two V-bottoms already inked on their Outerlimits resume, Hurry Up!!! is their first catamaran. "Jason always wanted one, but had settled on the last 50' V-bottom for me and the kids," said Laurie. However, gauging from her energized tone, and sparkle in her eyes, something tells me, she and the kids are just fine with stepping into this black and gray kitty! Not to mention, another major factor prompting the SC46 purchase is having the canopy will now allow for boat adventures year round.

Every facet of the build has been implemented with the greatest consideration for functionality and the utmost safety measures including regulators for all six seats. Inspiration into the design process stems from the jaw-dropping Outerlimits Jet, which Jason was drawn to at the 2019 Miami Show. Since he is not a fan of rounded curves, Hurry Up!!! mirrors that of Jet with its angular physique. 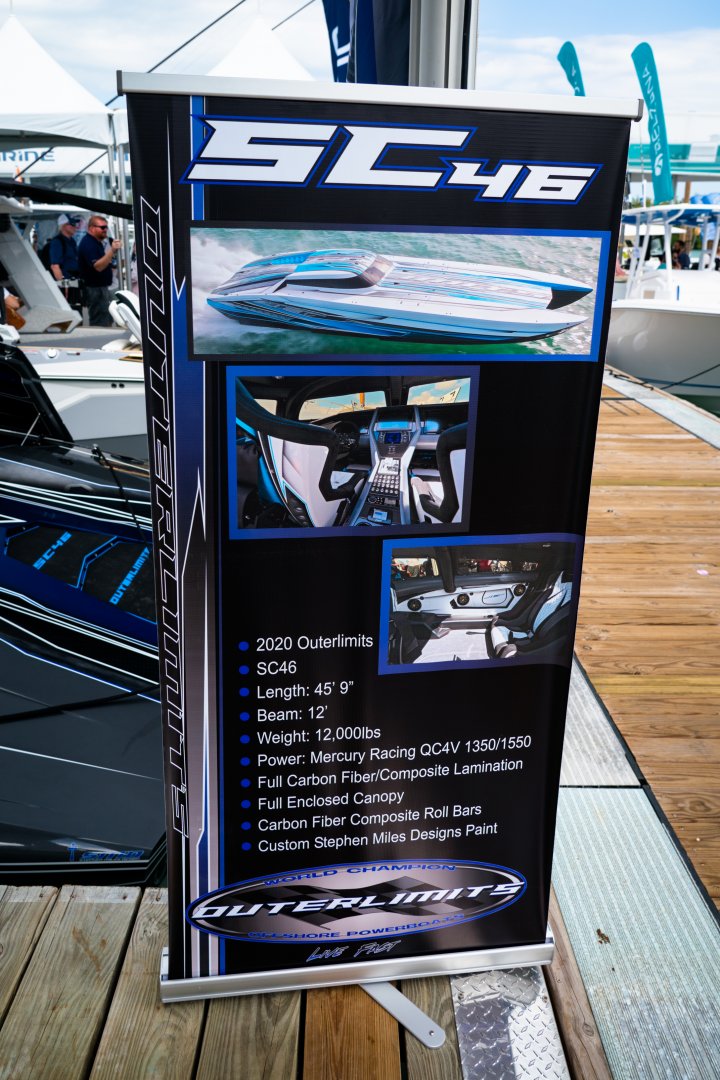 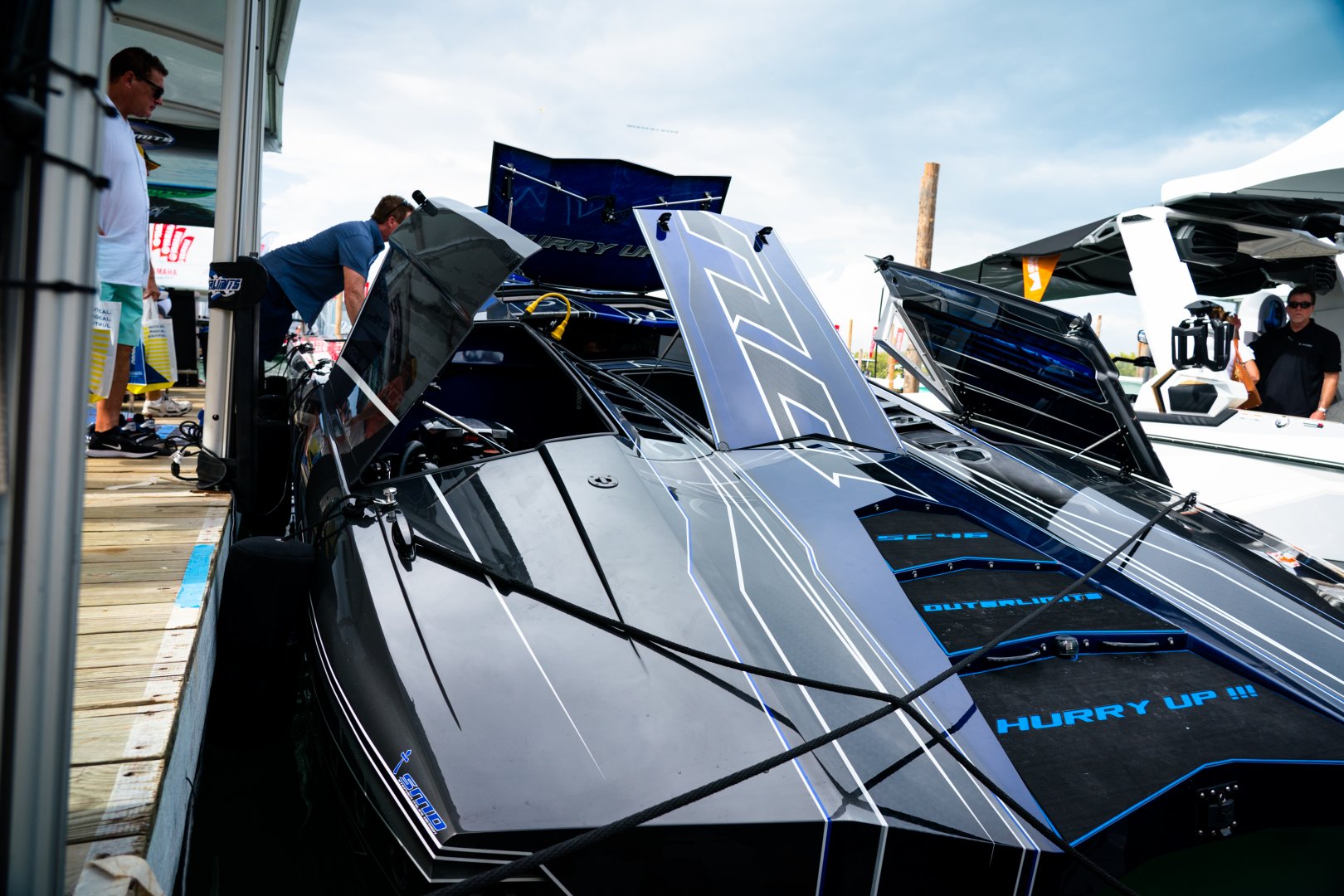 The SC46 Mercury Racing 1550/1350 powered aquatic animal attracted more attention and camera clicks than President-turned-Grand Marshal Trump's armored Beast racked in at the Daytona 500, thanks to the meticulous attention to detail all around. Partners Jeremy Katz and Justin Cunningham of JK Automotive Designs, should take a bow for working miracles with their flawless craftsmanship of the gorgeous infanta blue Alcantara interior, including laser etched number 46s on the seats, and embroidered lettering of Hurry Up!!! on each safety belt. In speaking with Jeremy, he told me the Massachusetts-based business primarily handles specialized auto interiors, and this was their first boat project. From what I saw, it won't be their last! 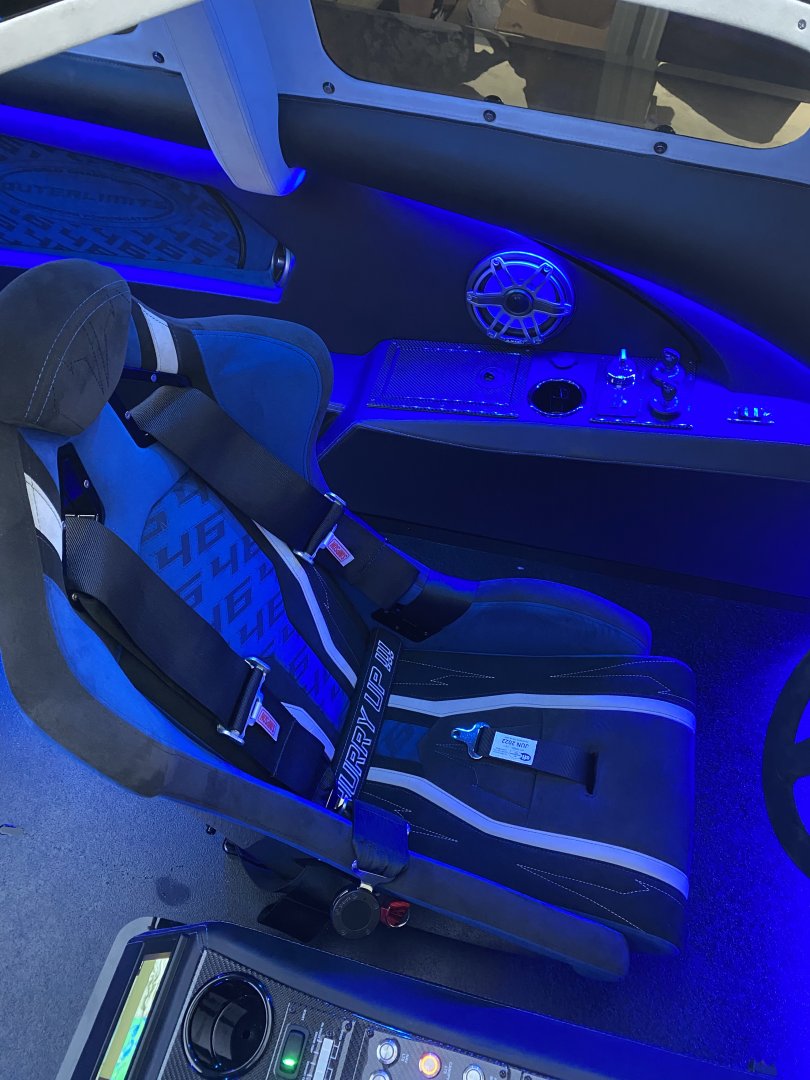 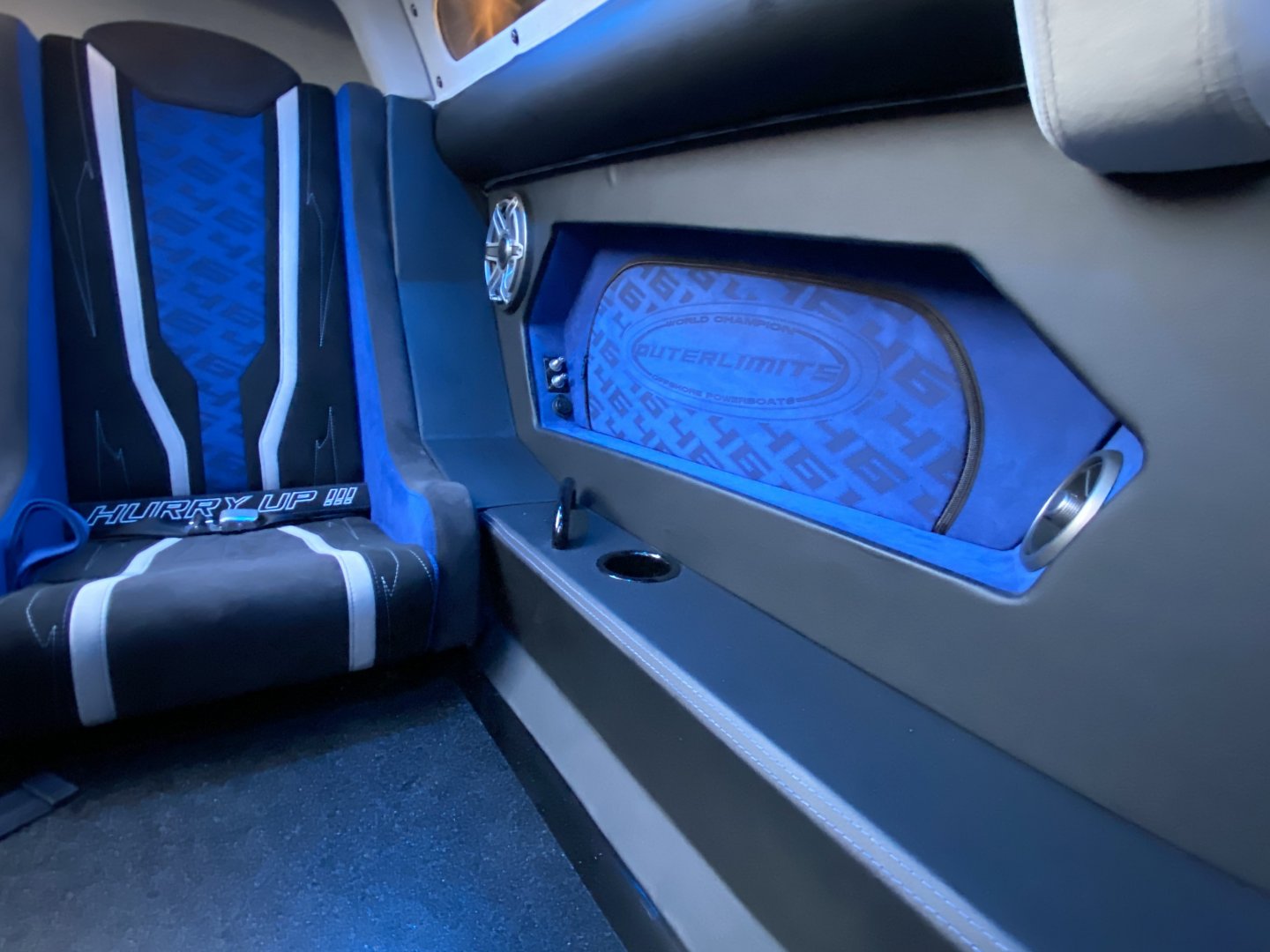 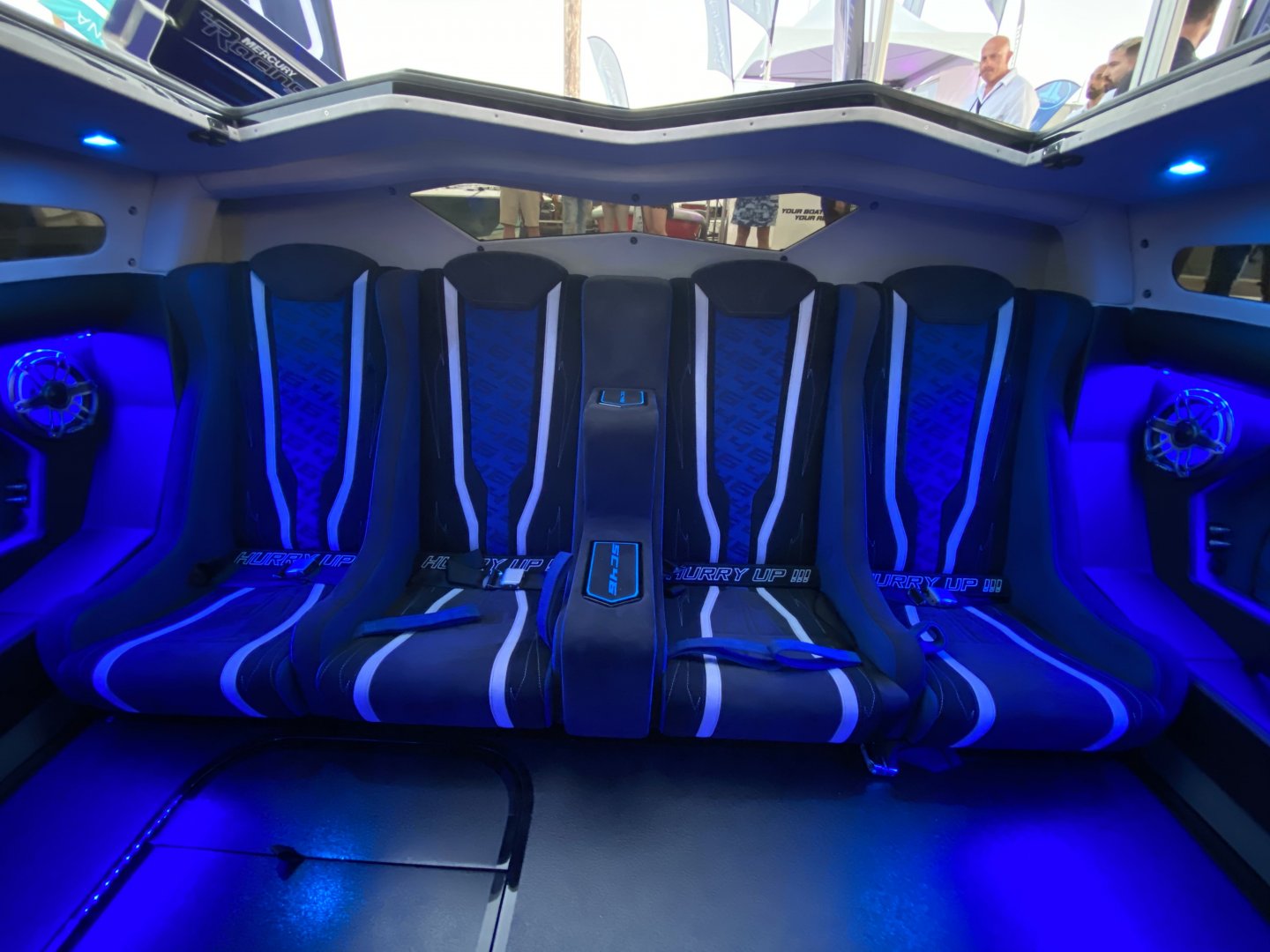 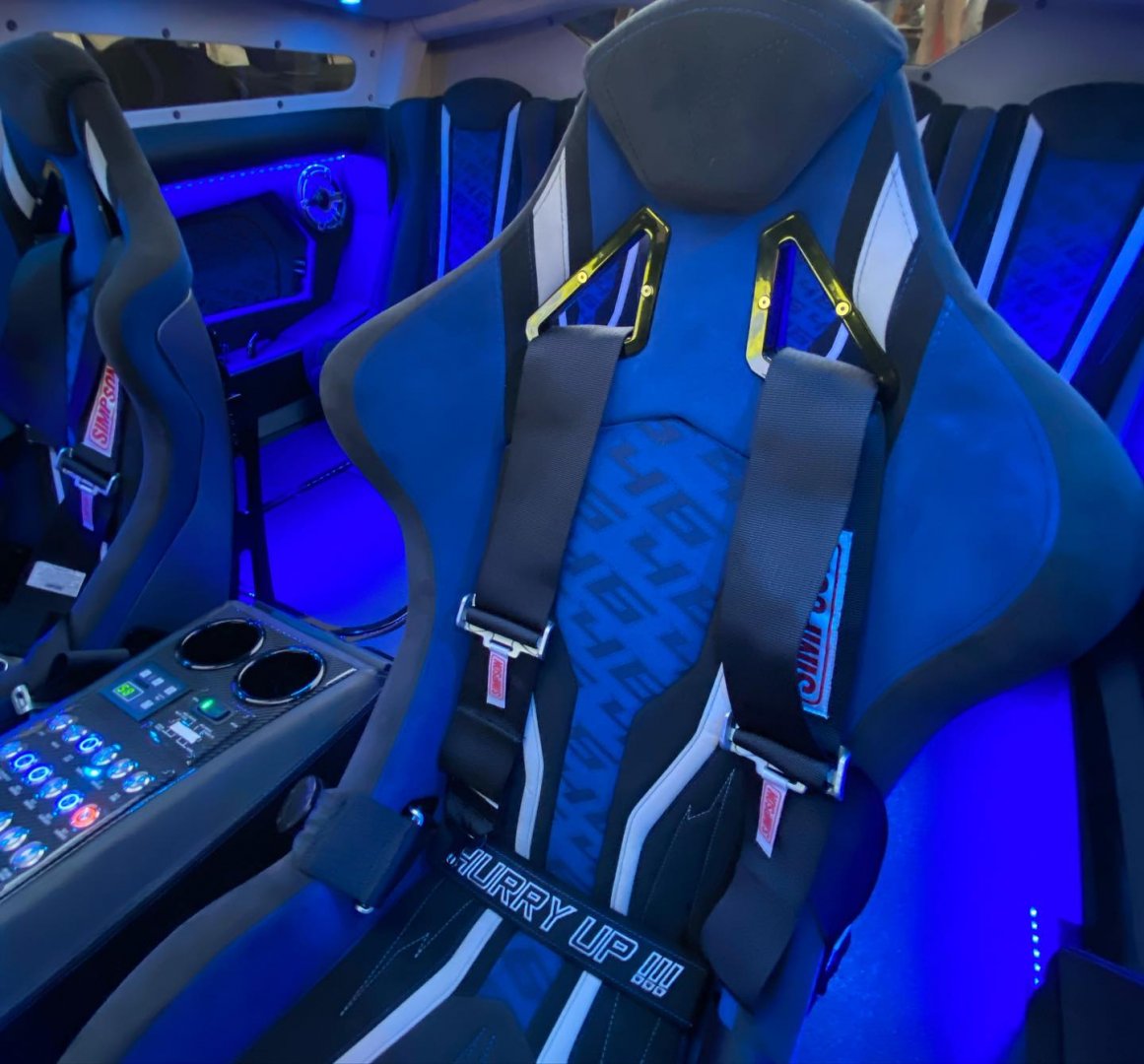 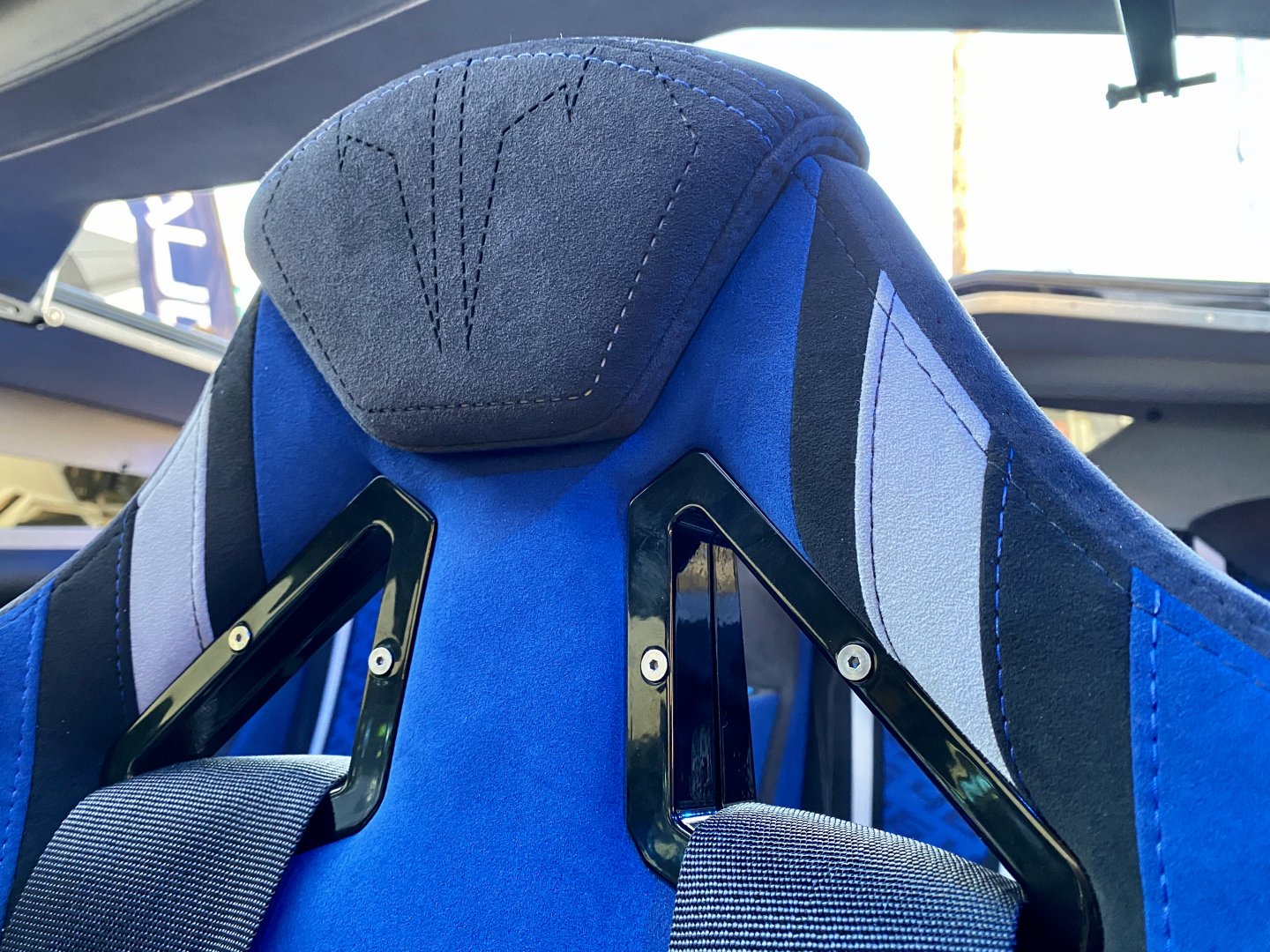 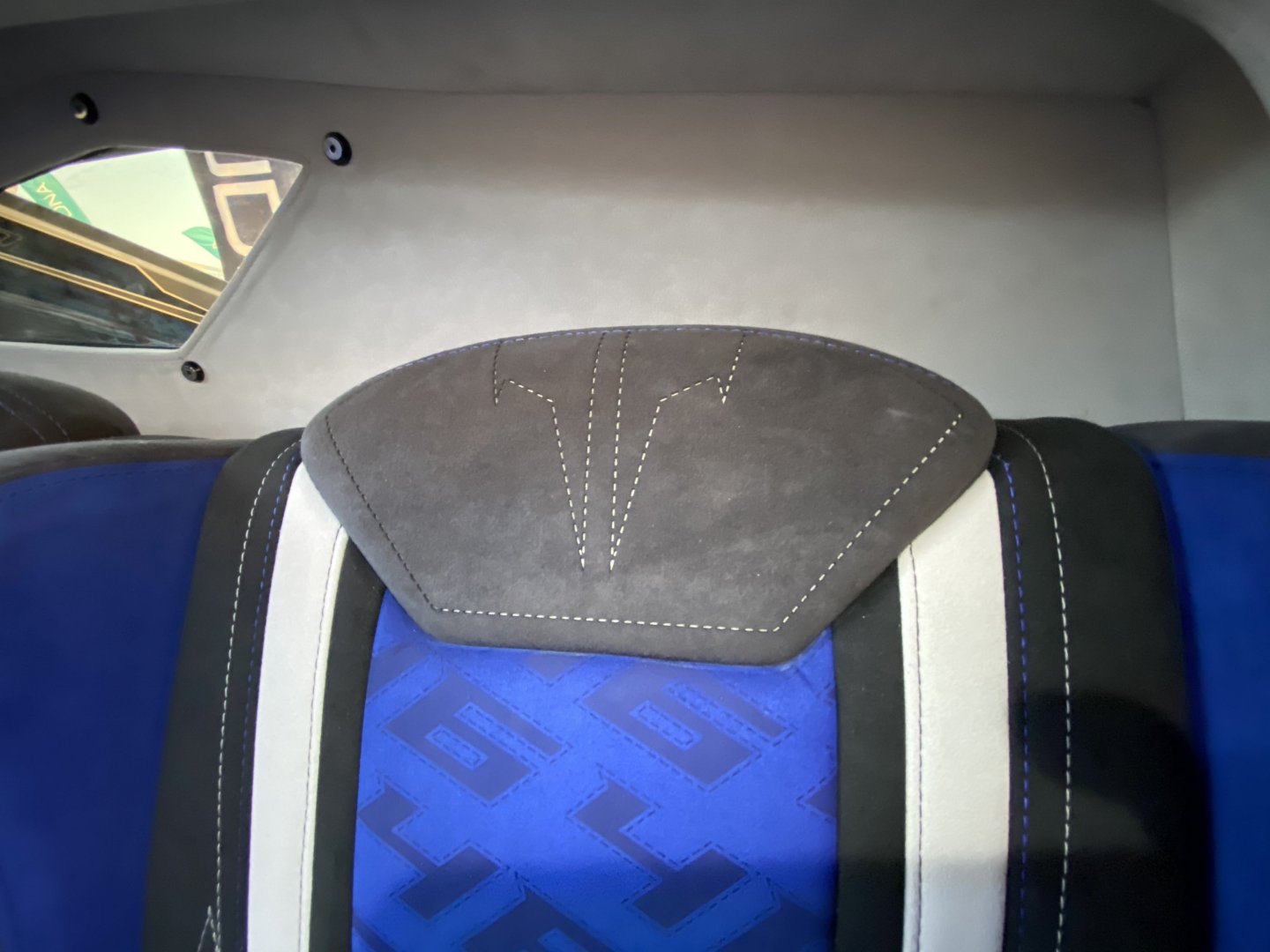 Kentucky color whizzes at Stephen Miles Design took command of exterior paint duties bringing to life the eye-popping tractor graphics rolling along the hull sides that pay homage to the family's excavation business. And in keeping in line with the 46-footers wow-factor esthetic, an equally impressive set of preliminary numbers follows suite on the speedometer. 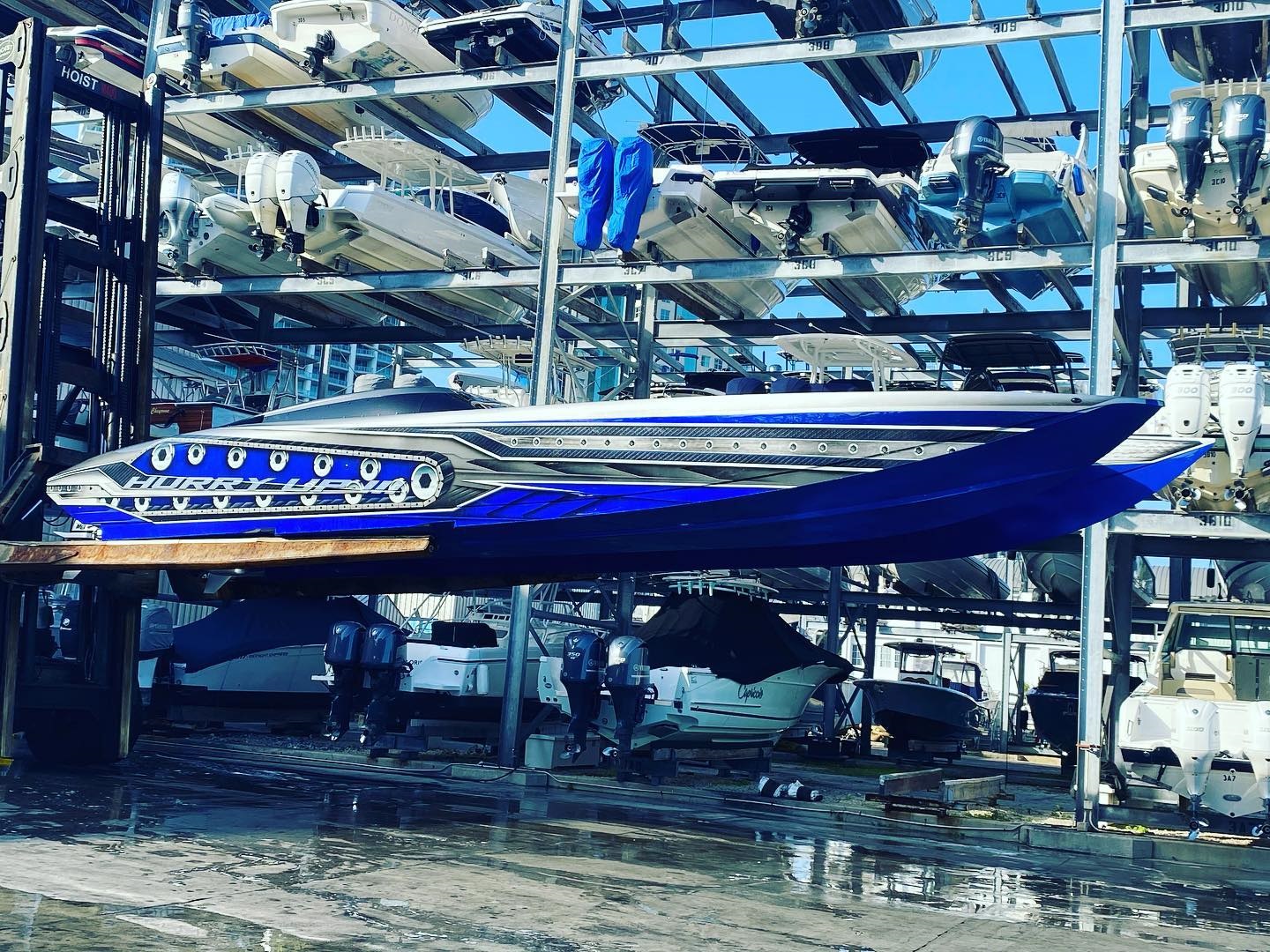 This feline was born to roar. Out of the box testing of the 1350s turned in a high of 166 mph and near 125 mph during less frisky cruising moments. And no doubt, the GPS will soon soar to 185-190 mph when the dual calibration hulk-like 1550s work their magic. I can say this with 100 percent confidence, since knighted kingpin throttleman and speedboat savant Steve Curtis has been tasked with the set-up. Over the weekend, both Jason and Colton were all smiles sharing the cockpit clocking in a few Miami miles with Curtis. 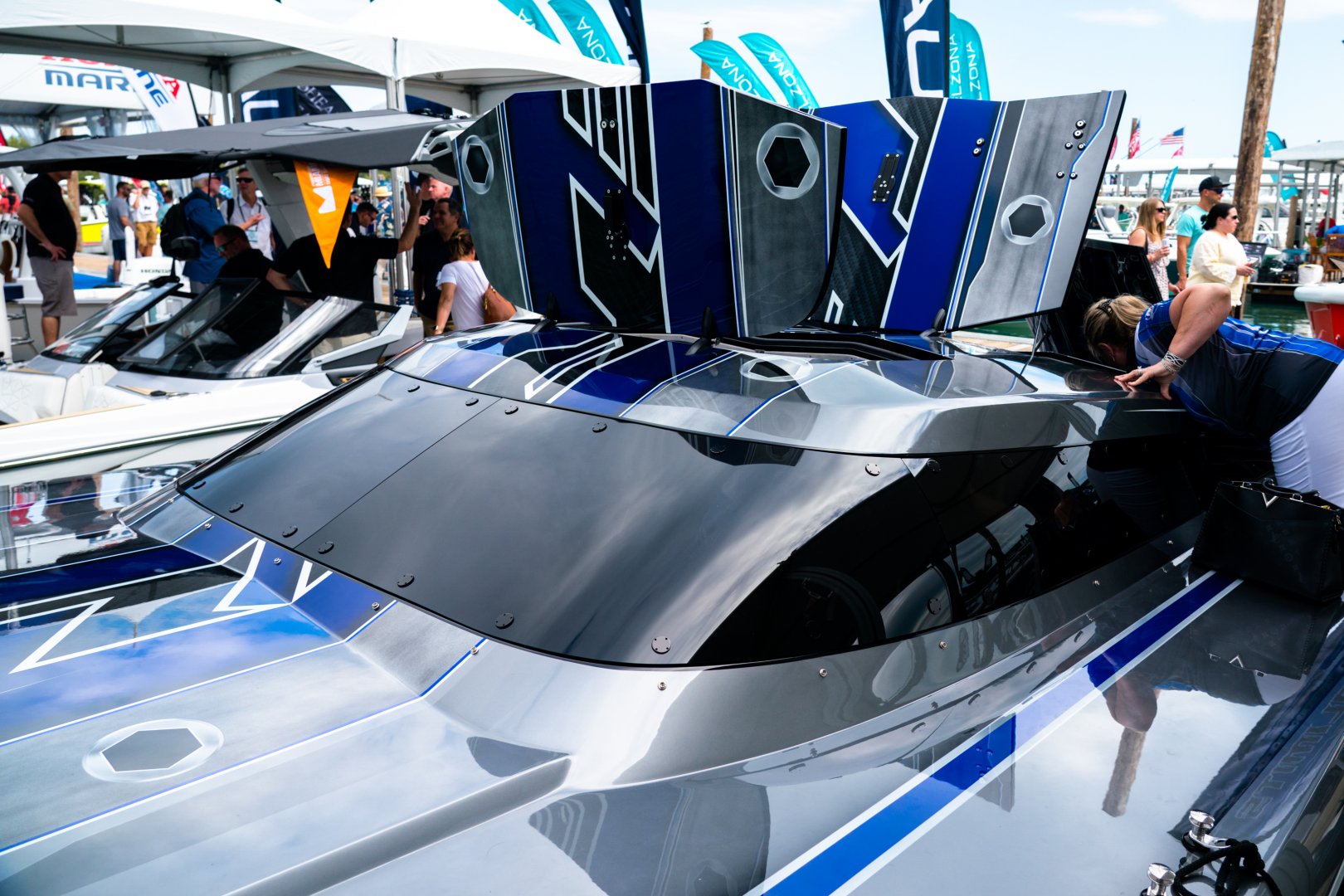 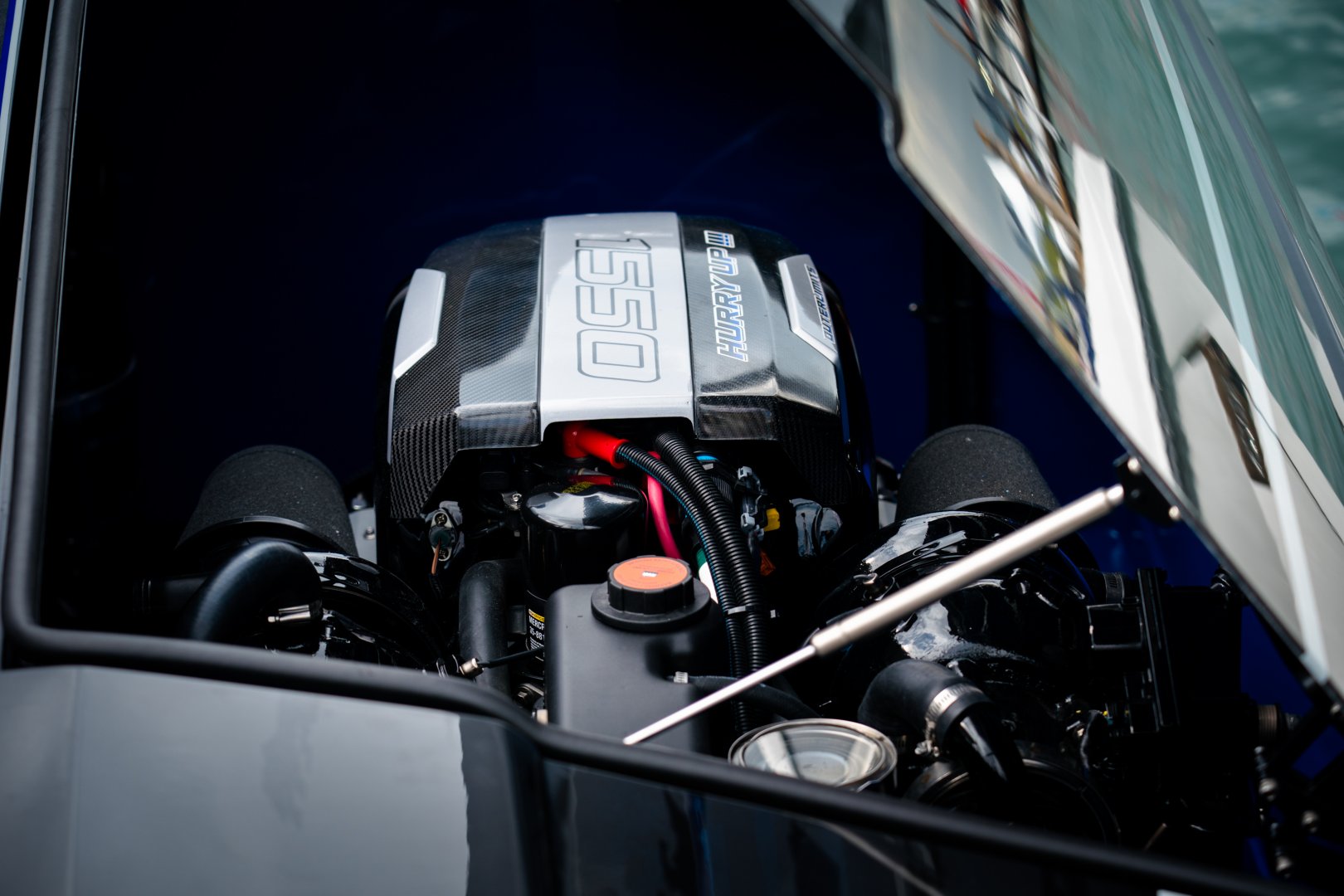 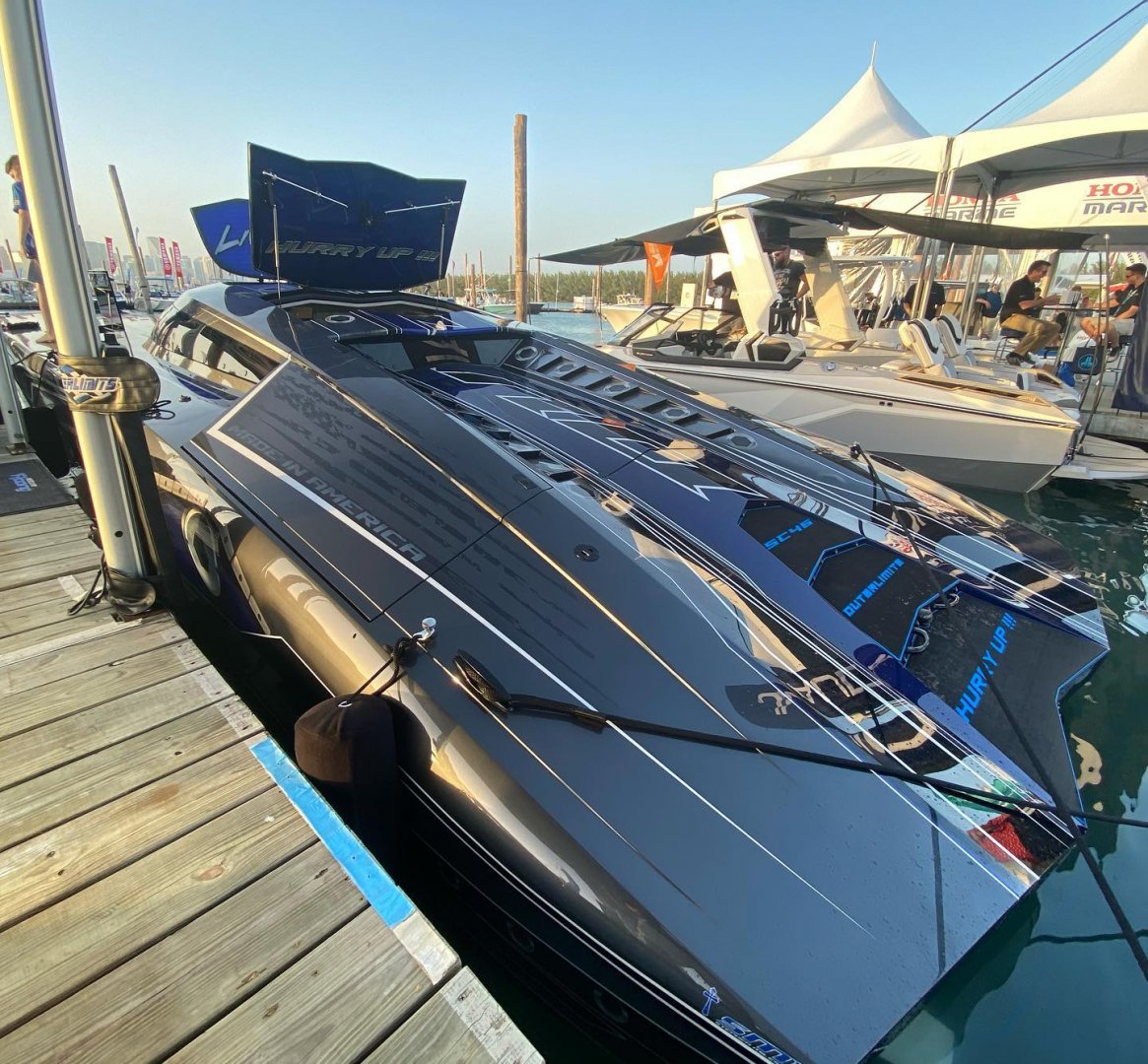 Going global from the get-go, the hoopla around Hurry Up!!! made more than national news after beloved Italian marine journalist Maurizio Bullari was granted a memorable whirl under the Richenbacker Causeway seated alongside Curtis. You may know the nautical notable from his Italian and dubbed-over-English luxury and high-performance boat test videos on YouTube from THE BOAT SHOW. RDP also thanks Steve and Maurizio for the aerial photo in this story. A cat is always best appreciated in action, when seen clawing through the crests... 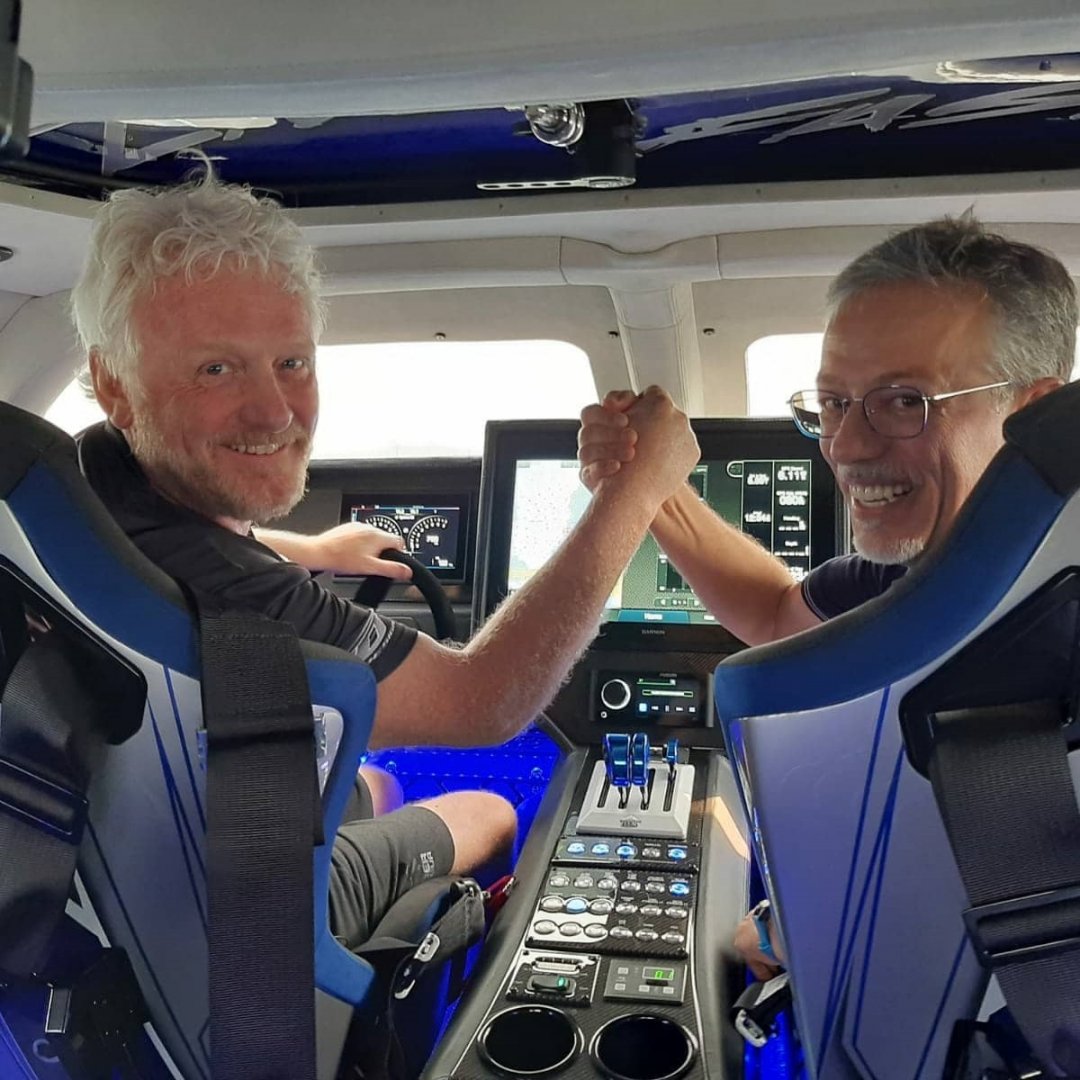 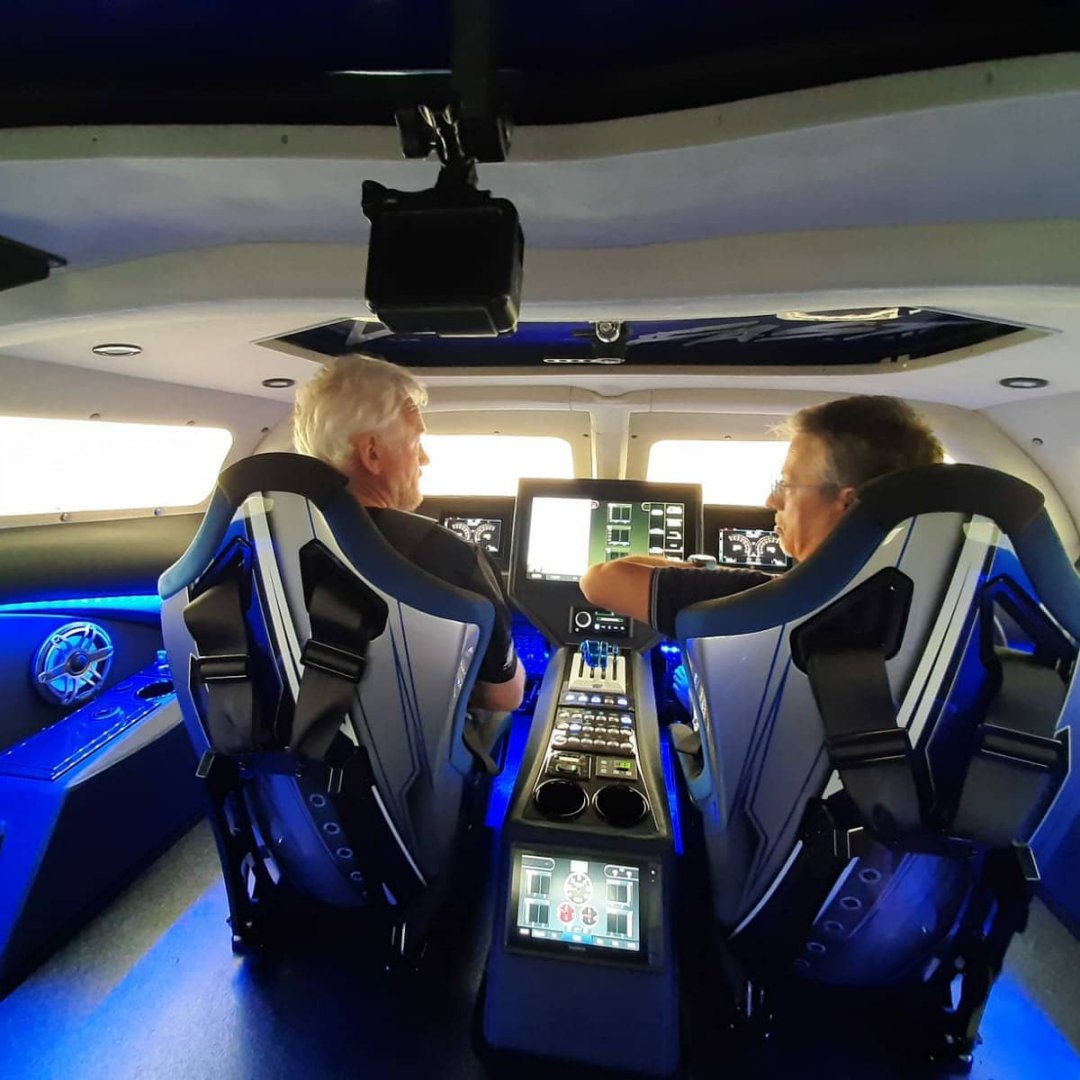 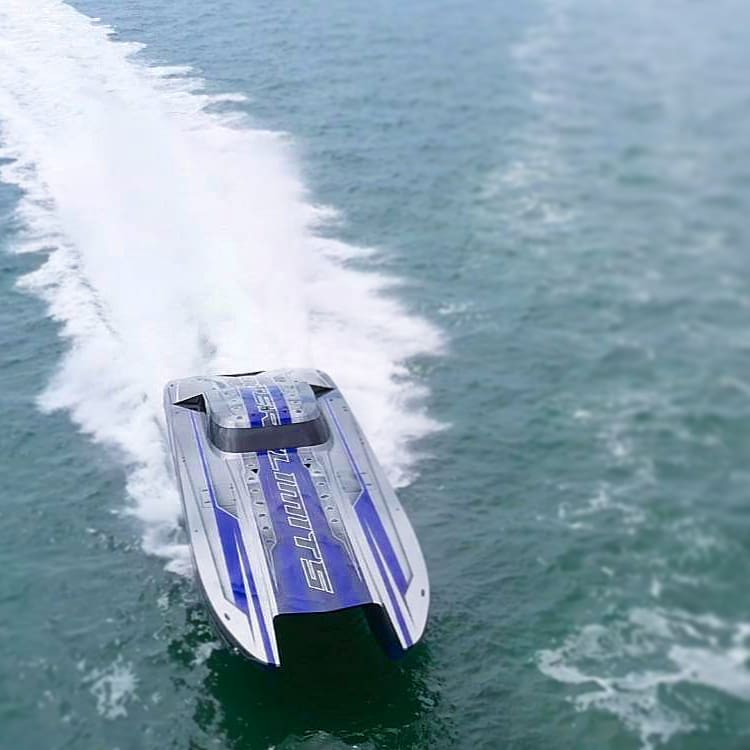 Trying to catch a glimpse of Hurry Up!!! once it heads north out of Miami may be a challenge, but if you look fast enough, the black and blue blur blasting by at the Kuttawa Cannonball Poker Run in Kentucky, Erie Poker Run in Pennsylvania, Boyne Thunder Poker Run in Michigan and unforgettable Florida Powerboat Club Key West Poker Run -- well, uhmm that's them. All four fun runs are already programmed into the Moe's 2020 waterway calendar. 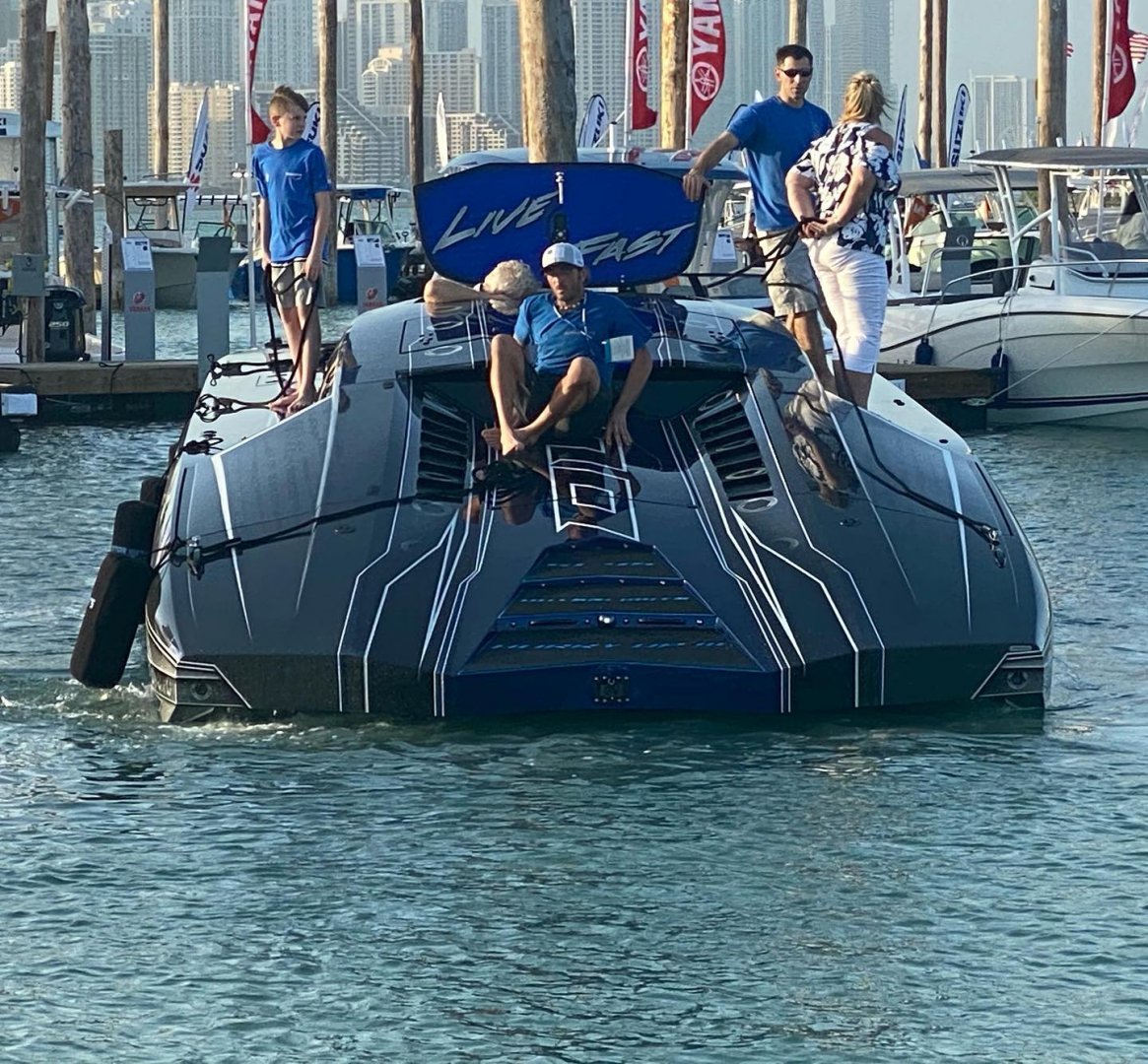 Sand and stone might have connected the twosome, but when not busy bulldozing through corrosion; its the thrill of horsepower on the water that keeps them moving. What impressed me most about the Moes, was that powerboating is an absolute family affair. Kaitlin and Colton carry credentials for having completed the Washington State Boater Education Course and both handle their shared responsibilities as part of the Hurry Up!!! team. It's also not uncommon to find Colton operating one of the Elk Heights pieces of machinery, and I'm sure it won't be long before he's in the front seat plowing through the rollers next to his dad!