Part One: In and Out

Genuflecting in reverence and respect seems only fitting after inspecting the stability and rigor of the ride produced from the Seakeepers on the INSIDE and the beast-mode superiority and stature of the new Mercury Marine V12 600-hp Verados on the OUTSIDE of a special selection of luxury center consoles at this year’s 2021 Palm Beach International Boat Show (PBIBS). Why do I say this? Because today’s advanced technology has enhanced our personal on-water experiences above and beyond… and beckons for bowing down in awe and admiration. That’s why! 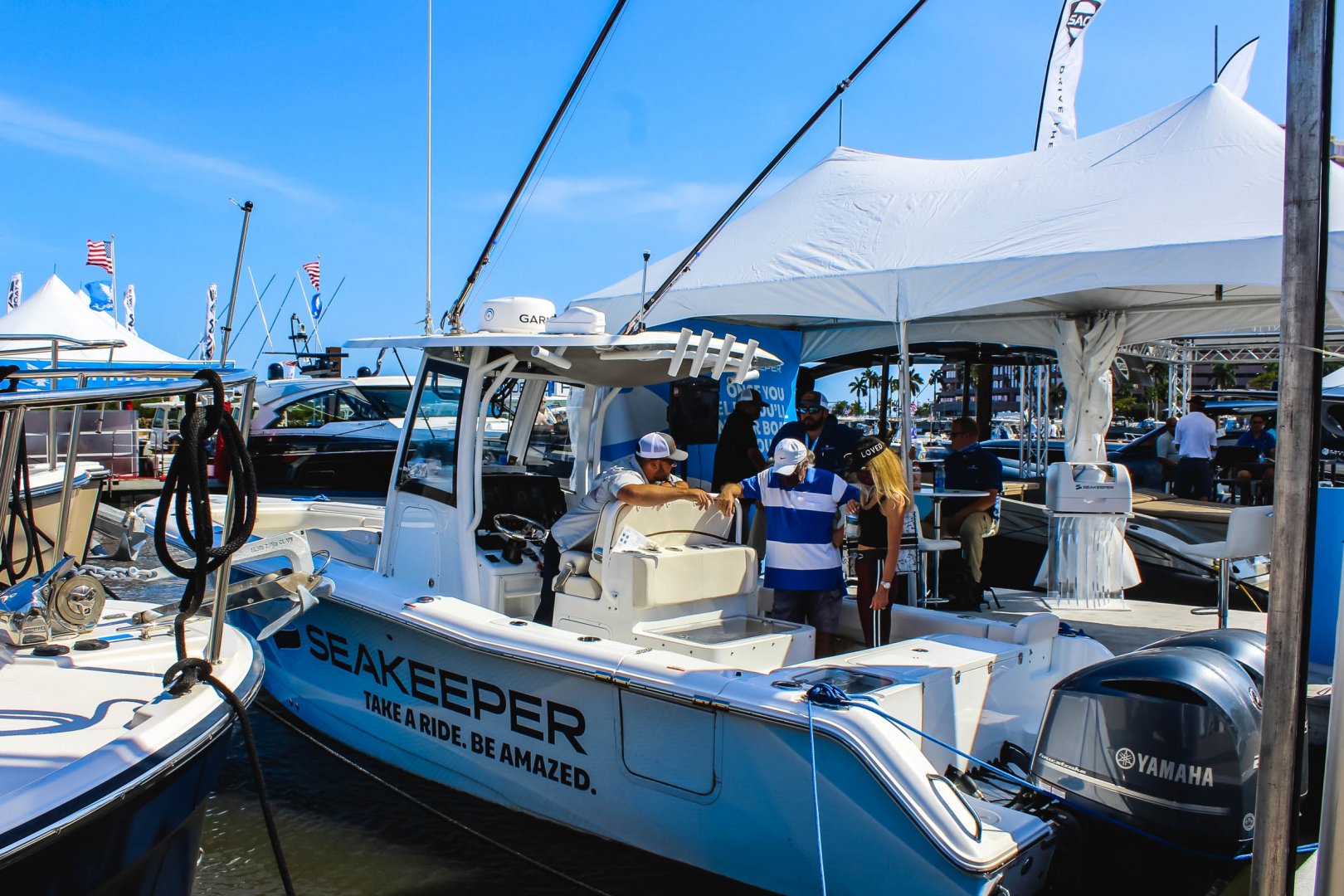 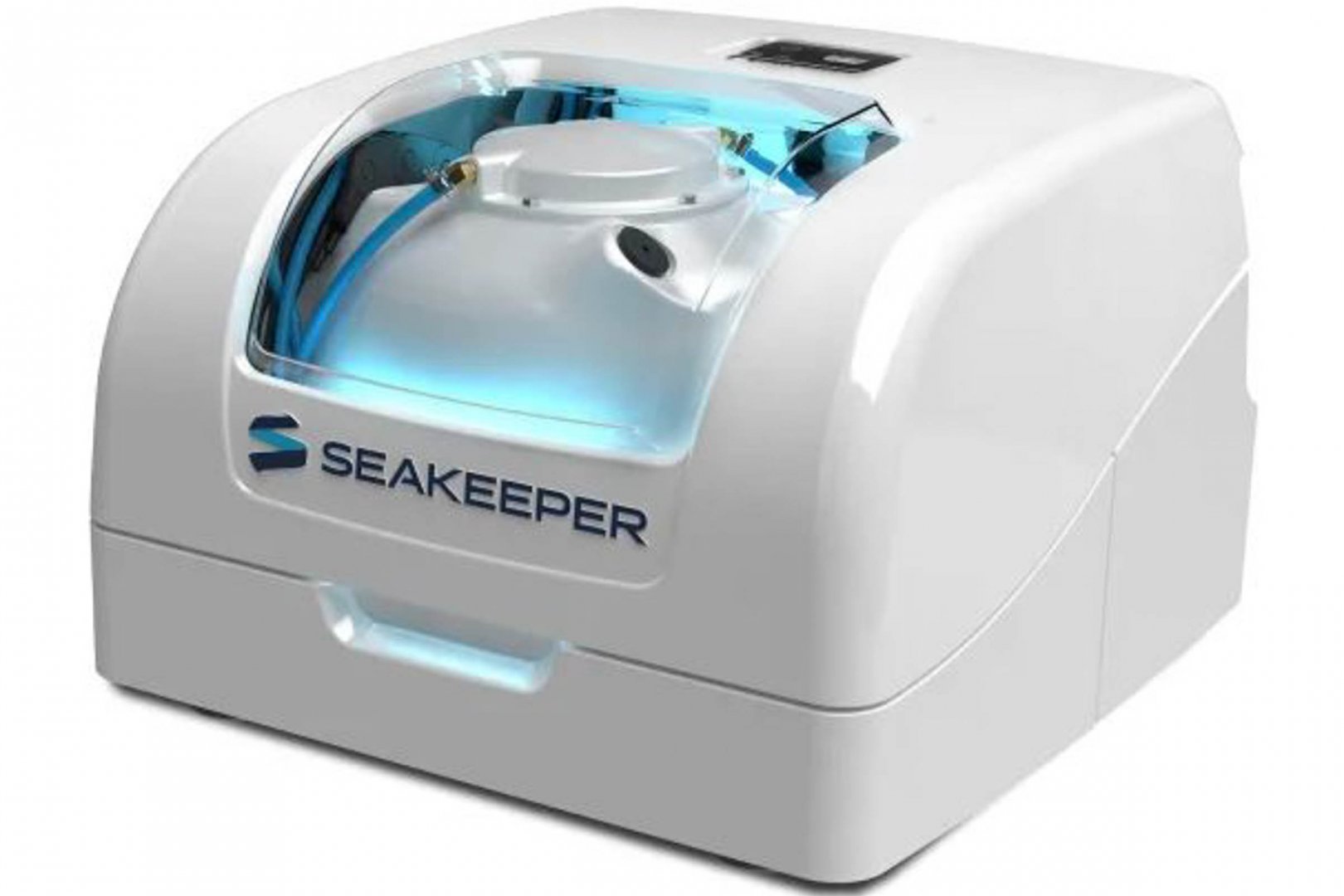 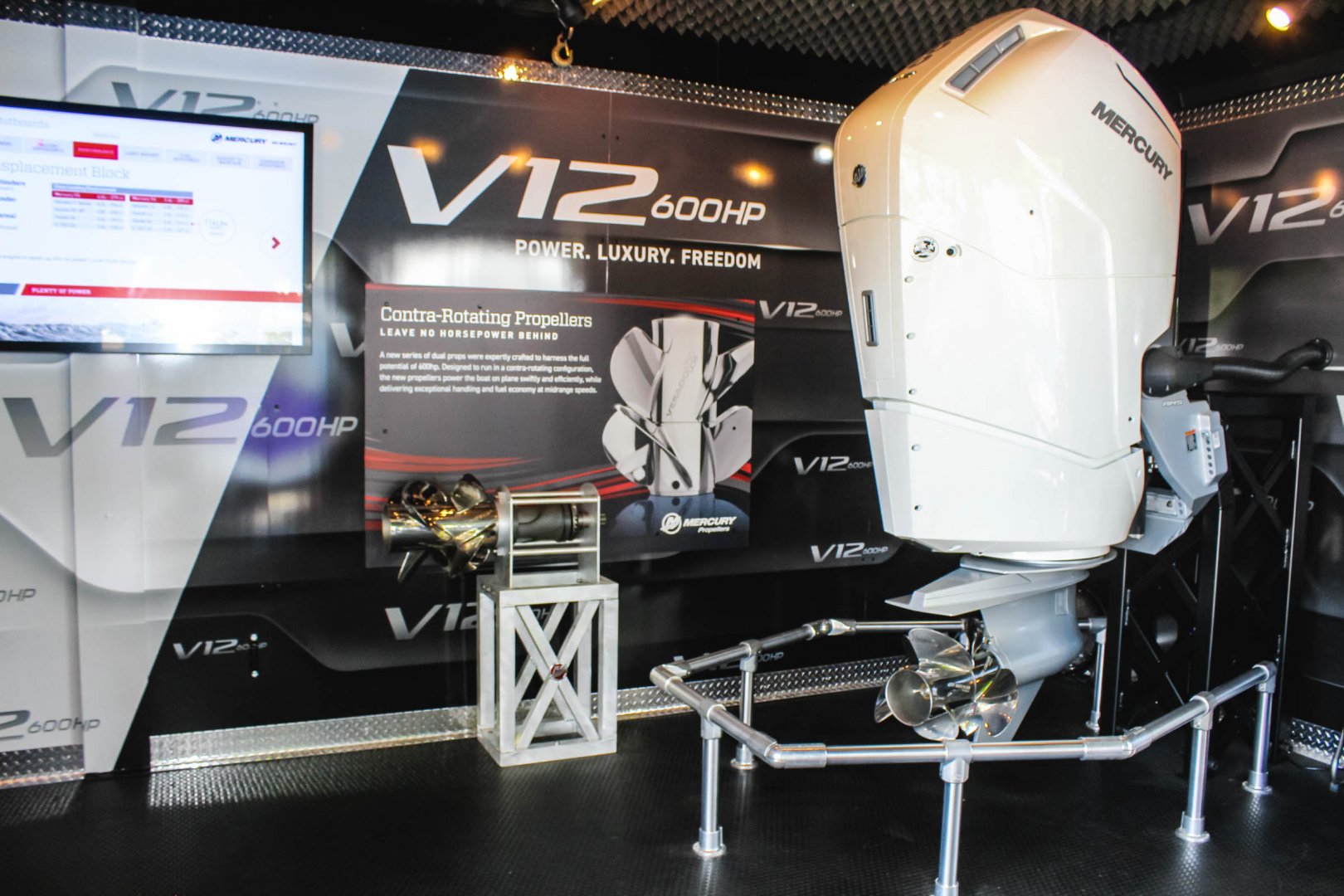 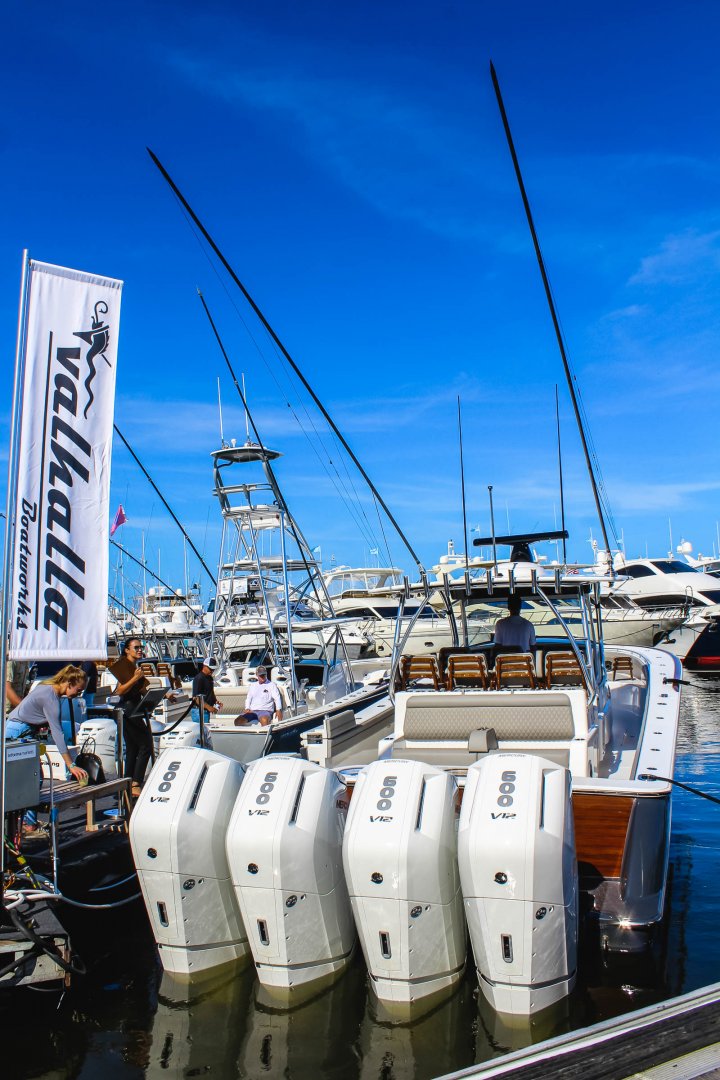 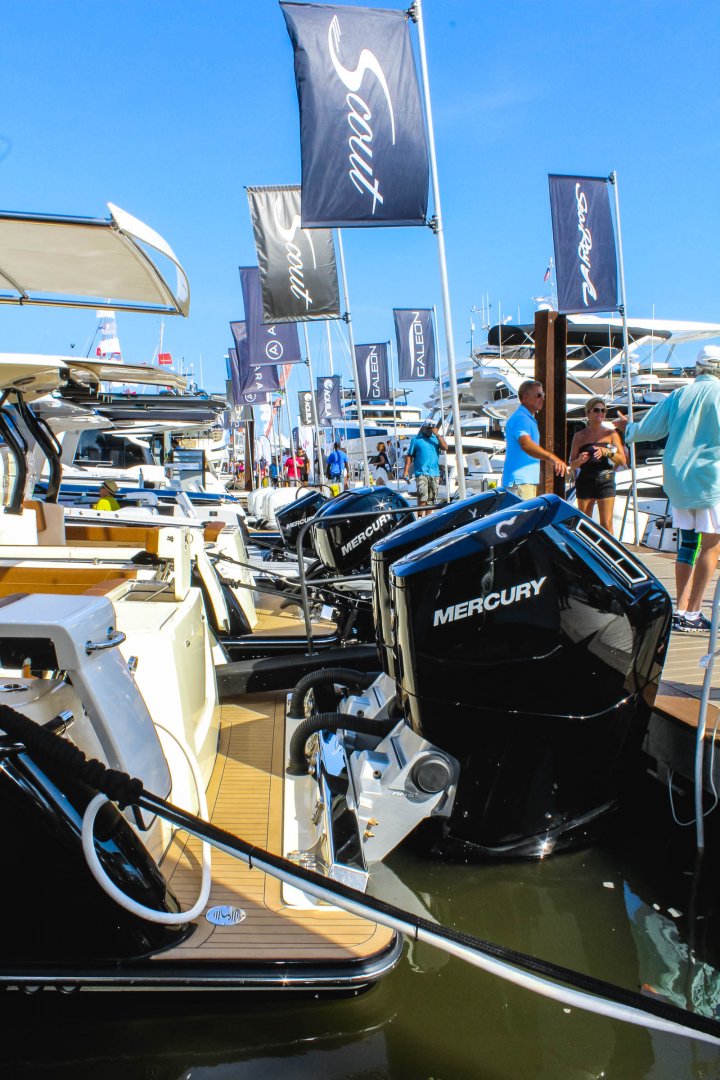 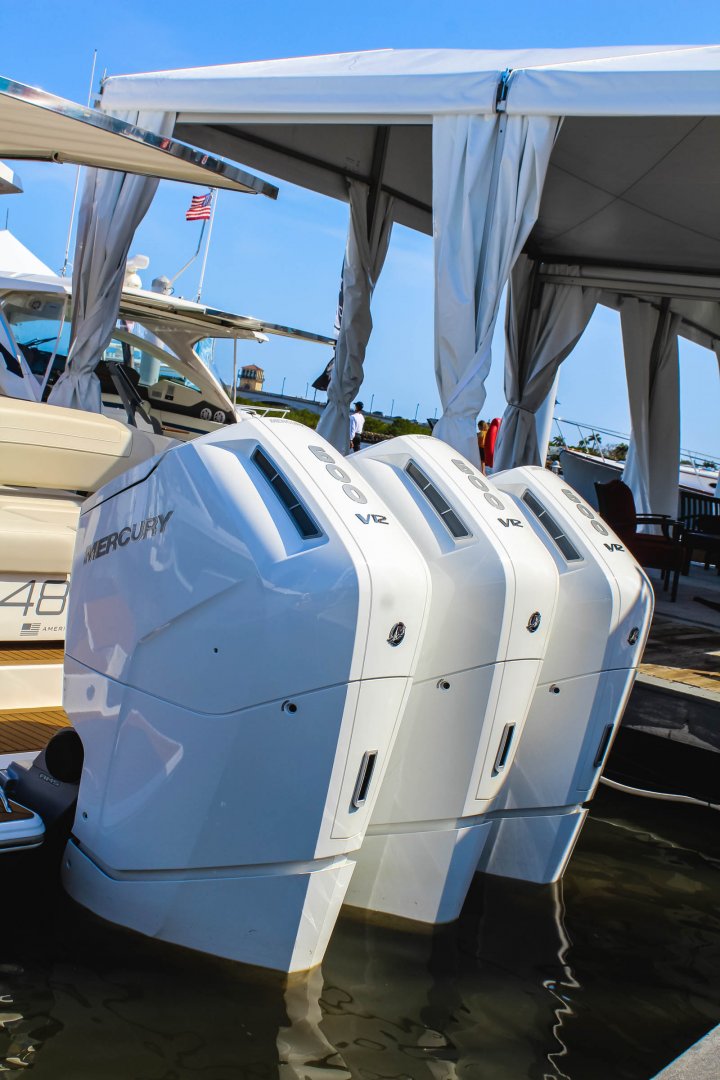 Seakeeper: Removing Center Console Rock-n-Roll ​
Renowned for removing the rock-n-roll, not from the JL Audio speakers, but rather the rhythmic swaggering motion under your feet – anti-roll gyros are becoming as common an option as air conditioning and a generator. For those not familiar with how Seakeepers first went from being outfitted on famed super yachts to becoming a familiar sight (and delight) on center consoles, installations commenced back in 2015 when the Contender 35 ST became the first of its kind to feature a battery-powered Seakeeper 3DC. But, that’s not all folks!

Even more revolutionary, the system can be placed virtually anywhere at deck level enclosed in an optional leaning post. The increased flexibility coupled with the decreased costs ultimately opened the market to the smaller guys. Furthermore, operating entirely on 12 volts DC eliminated the need for AC input from an onboard generator. Now six years down the road, they’ve taken the water world by storm and are the new norm – especially since the smallest of the batch, the Seakeeper 1 came aboard. If you don’t believe me, hit the docks of any major boat show; the units are everywhere.

Last year the California/Maryland- based brand launched its most compact unit to date at a special media event during the 2020 Miami show. Seakeeper 1 was introduced for vessels 23 to 30 feet and weighing up to 13,000 pounds. The 365-pound stabilizer costing $15,900 without installation was designed with a control keypad directly on the unit and can also be connected to Garmin, Raymarine and Simrad display monitors. Better yet, the new viewing window adds to the onboard allure, and thanks to the flush mount set up, no part of the sphere hangs below the installation point.

In total, 14 different models are in production and as your boat length increases so does the unit size requirement, hence the Seakeeper 2 will be your choice for 31’ to 35’ boats, followed by the Seakeeper 3 for 36’ to 39’ boats and the Seakeeper 4 for 40’ to 45’ boats and so forth, up to the largest Seakeeper 35 sized for 85-foot-plus vessels and retailing for $231,800 (plus installation). Adding multiple units is a common practice, as was the case recently with a dealer who installed nine on a customer’s 160-foot watercraft. We’ll skip the needed cha-ching to acquire the engineering bling and instead look at the basics of the extraordinary process successful in eliminating 95 percent of side-to-side swaying. 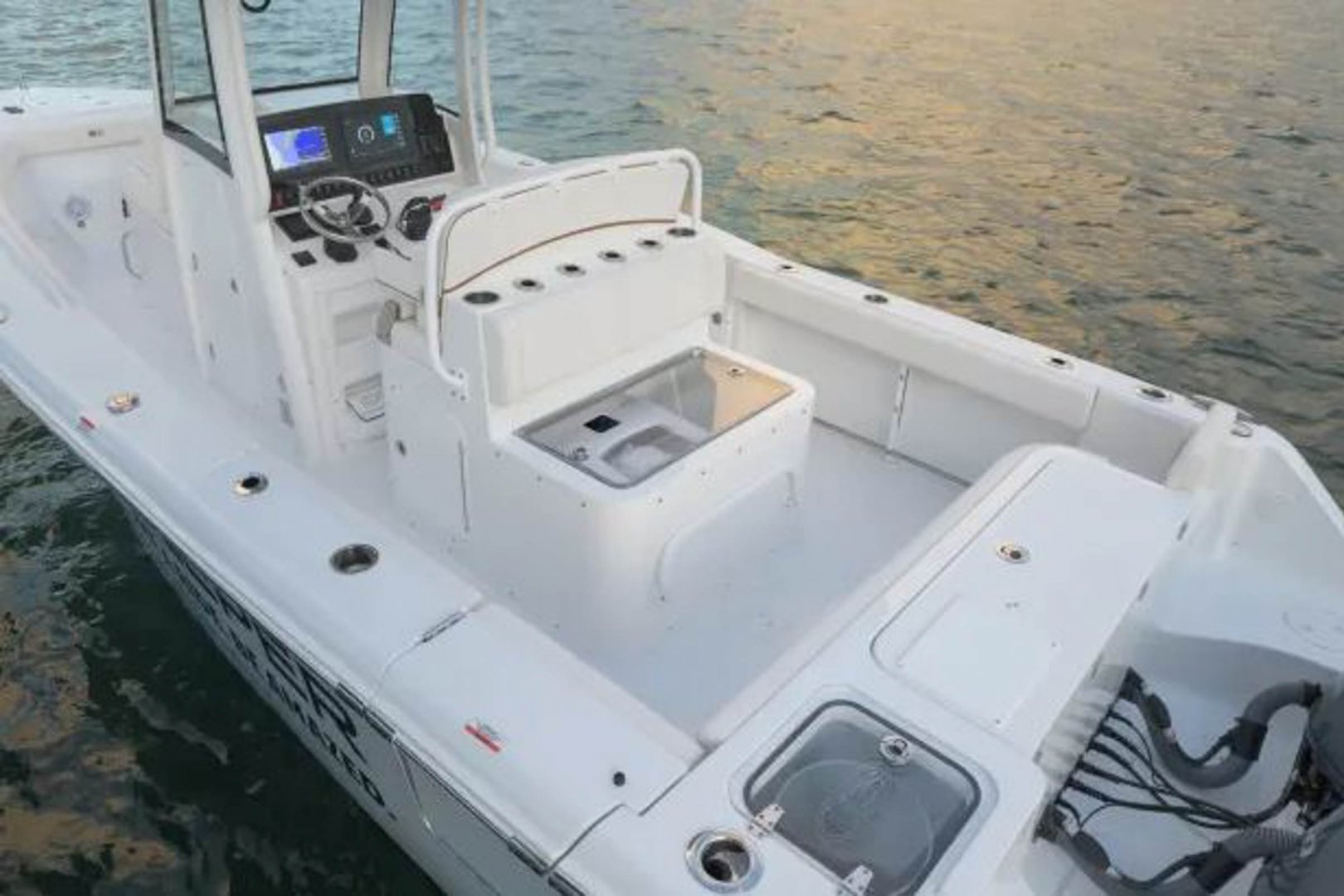 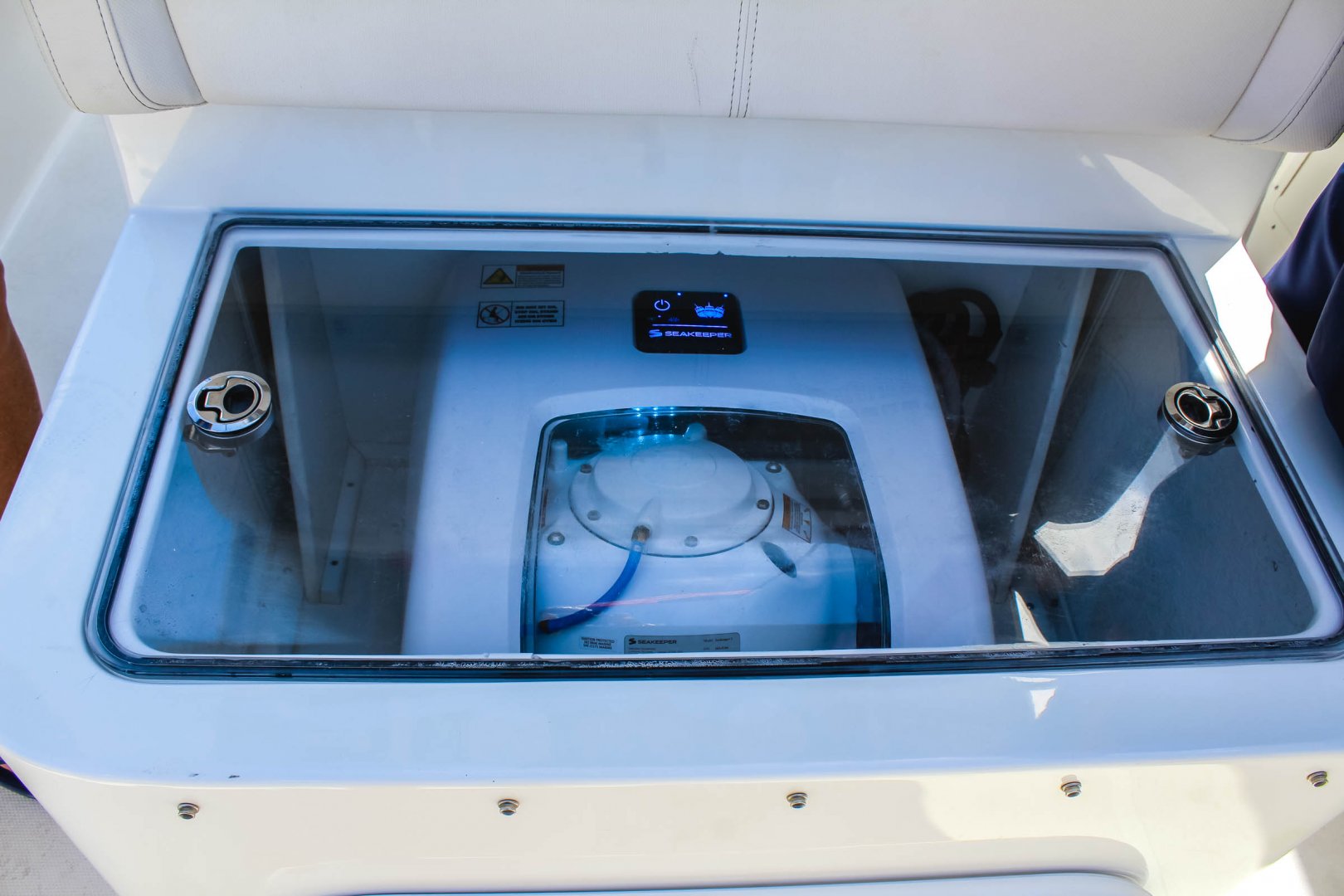 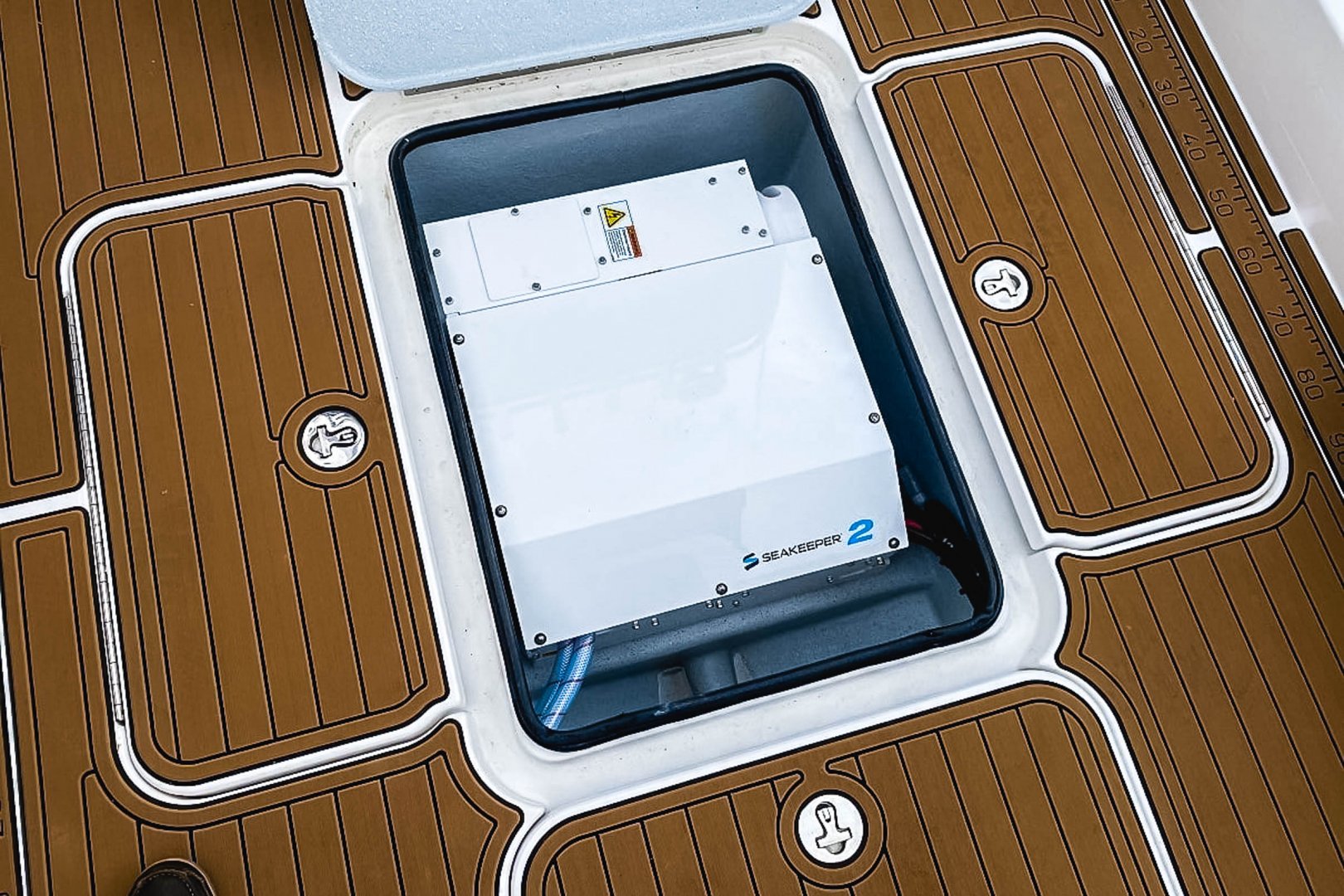 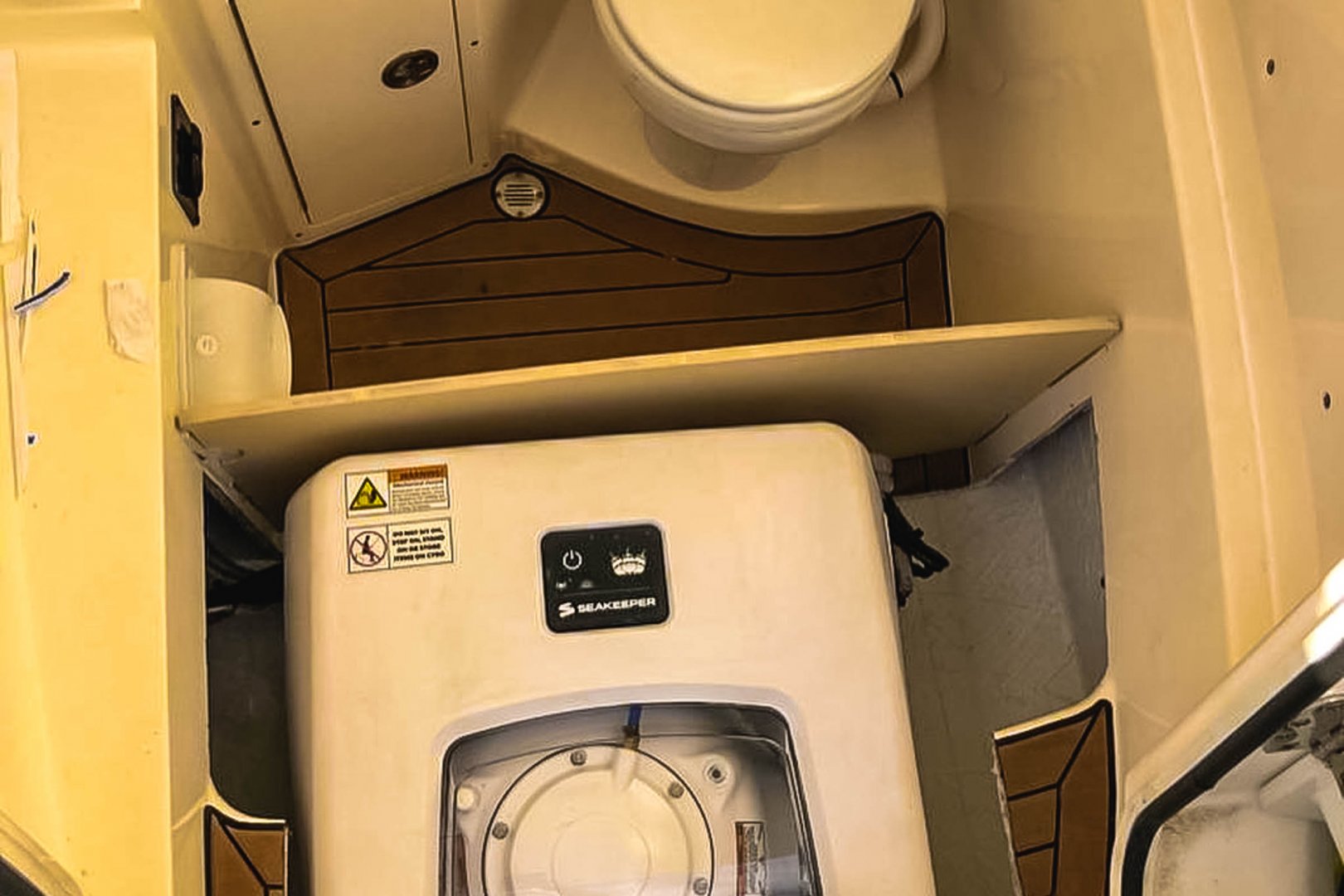 In simple terms, the gyroscopic stabilizing effect resulting from a heavy spinning wheel is responsible for keeping the vessel upright and stable. Inside a vacuum encapsulation, the flywheel spins at speeds up to 557 mph (9700 rmp) which is three times faster; cuts the weight by two-thirds; and halves power requirements, all while an active control system is constantly being adjusted and provides full torque in varying oceanic conditions.

In particular because the flywheel doesn’t have to battle air friction, it creates angular momentum and that torque pushes and pulls, counteracting the motion of the boat to keep it level. Additionally, the patented cooling system removes heat and dissipates it through a glycol/seawater combo, which also allows the flywheel to spin at a high rate of speed.

Beyond “unwavering” stability, further benefits include: reducing fatigue, anxiety, and the misery of motion seasickness from any guests sans sea legs. Fishermen join the fan list and can really get their game on when throwing a casting net or hooking a line. And for the poker run aficionados more interested in flying their center consoles in a straight line instead of tying a fishing line, the gyros are monumental in keeping watercrafts running in formation at a faster pace.

Seakeeper company captain Bryan Mullinex who was standing by in booth 1138 to perform the on board demos re-iterated, “Every boat rolls and when you have a group of poker runners going at full throttle together all putting off wakes in different directions, the Seakeeper keeps your boat more steady and able to achieve greater speeds. In terms of performance capabilities, this is huge for center consoles permitting them to go faster, but more importantly, feel safer at the same time.”

Then, Mullinex drew my attention to another advantage, “Our Seakeeper demo boats also serve as safety boats and we’ve had Miami-Dade Fire Rescue crew onboard ready to assist in case of an emergency.” In the event a paramedic would need to administer CPR, doing so on a non-moving vessel could potentially save a life – hands down this should be the most important feature.

On the contrary, when it comes to misconceptions, many hold the belief that the units only perform well at high speeds. This is clearly not the case; low-speed cruises and trolling trips reap the rewards of remaining rock-n-roll free. Maintenance requirements are too kept to a minimum since most of the critical components operate in a sealed enclosure, protected from corrosion and the elements on the water. However, do note that outside the sphere, the closed loop hydraulic circuit and cooling should be periodically inspected and serviced. Consulting the operation manual is your best bet for staying current with care. 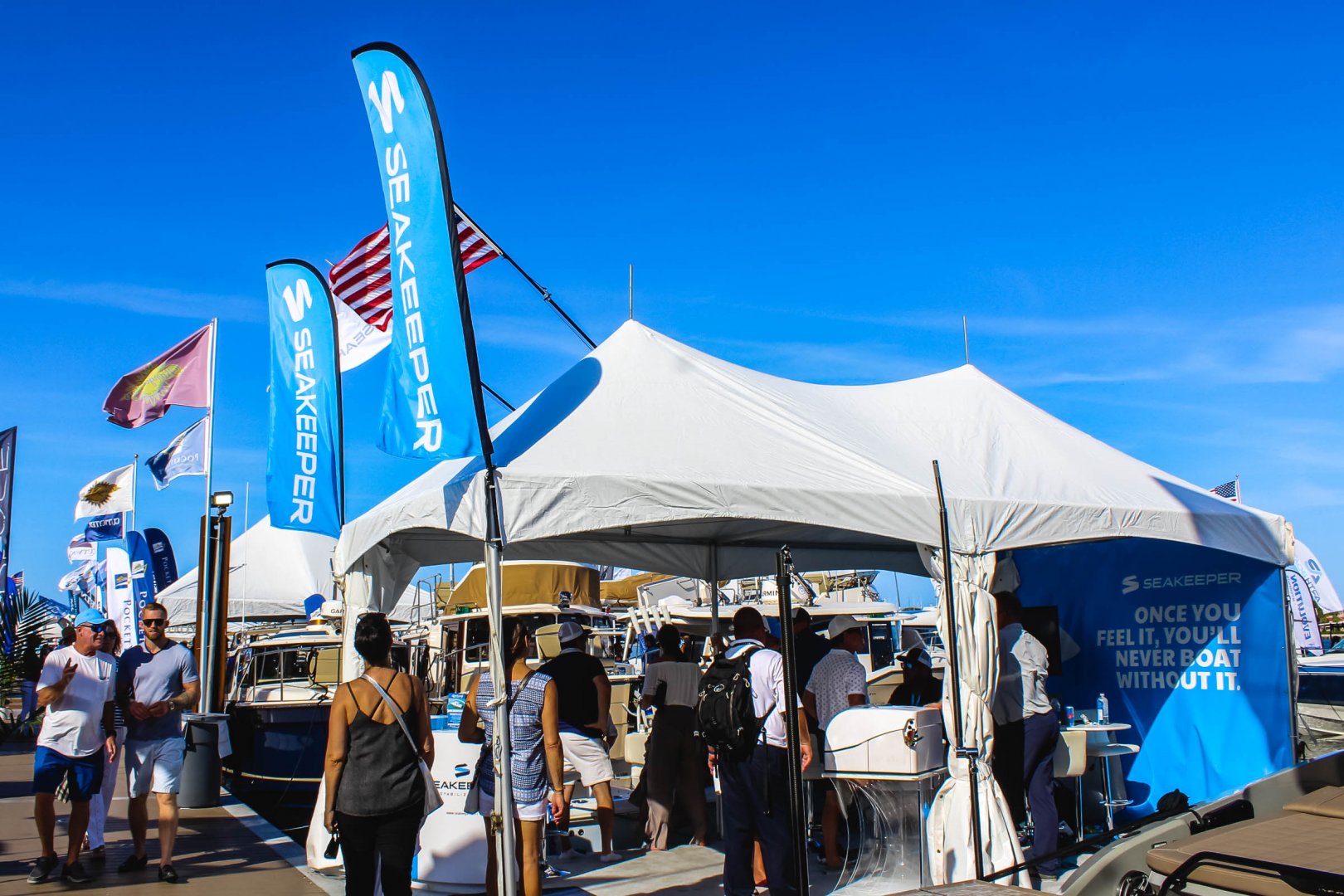 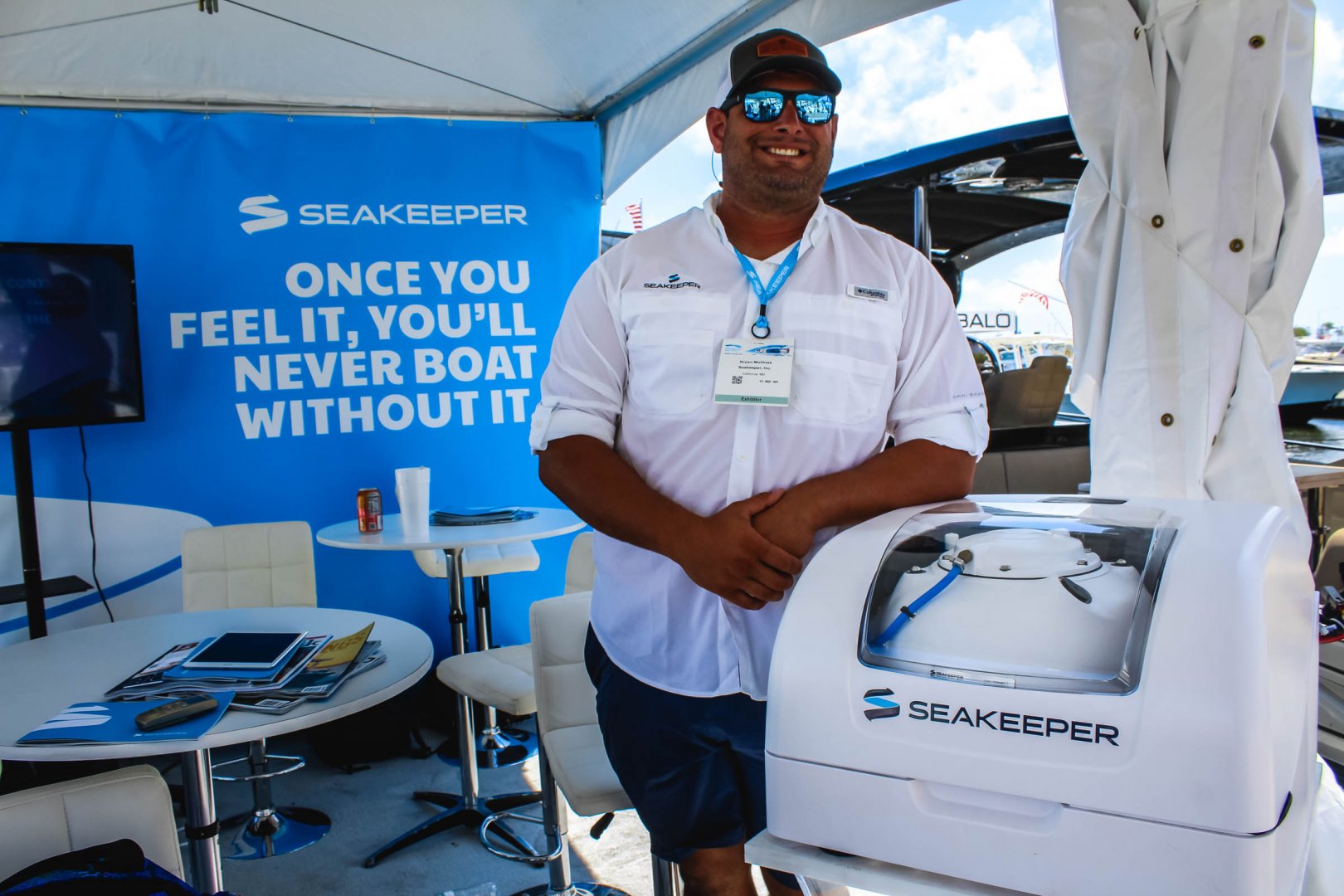 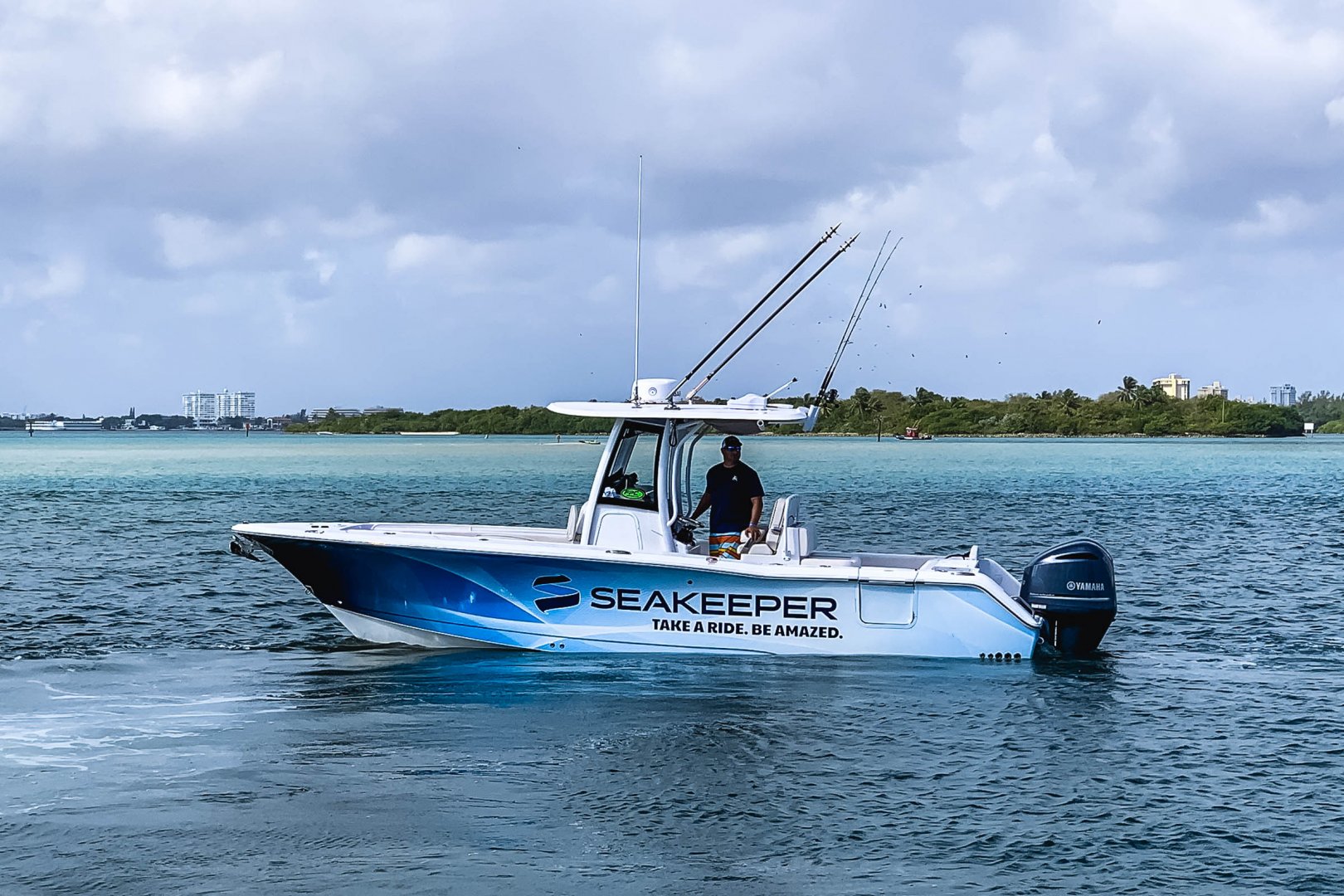 Mercury Marine V12 600-hp Verado Takes Tech to New Territory​
Exactly like nothing else... exuding authoritative power, mind-blowing propulsion and sophisticated whisper-quiet operation, the Mercury Marine 7.6L V12 600-hp Verado outboard engines give the "Go Boldly" motto new meaning. The gentle giants don't appear to be larger than life; they are larger than life… or at least more so than this five-feet-two writer.

Anyone who attended the PBIBS and passed by the land-based Mercury booth or admired the chosen crafts with the V12 Verados at the MarineMax display on the Boston Whaler 420 Outrage and Scout 425 LXF S Class, or the Sea Ray SLX 400, Viking Yachts Valhalla Boatworks 46 and Tiara Yacht 48 Luxury Sport at their respective booths, can also attest to this. (In addition to press at the invite-only media debut at Lake X debut in St. Cloud, Florida, back in early February.)

Business development manager Mark Skeen was the first Mercury Marine representative to greet me at the new product presentation rig overlooking the harbor docks. He patiently pointed out every feature of the powerhouse brought to the market to accommodate larger center consoles and yachts in the 35’ to 55’ range. When the mention of Mercury Racing entered the conversation early on (more specifically the equally-game-changing 450s) from a couple of oglers checking out the V12 monster and its specs, Skeen set the record straight reminding us that the Mercury Marine brand falls under a different umbrella embodying standard production and design requirements, contrary to its counterparts at the Mercury Racing extension, which come mounted to transoms embedded in high-performance racing DNA from the core to the cowl. 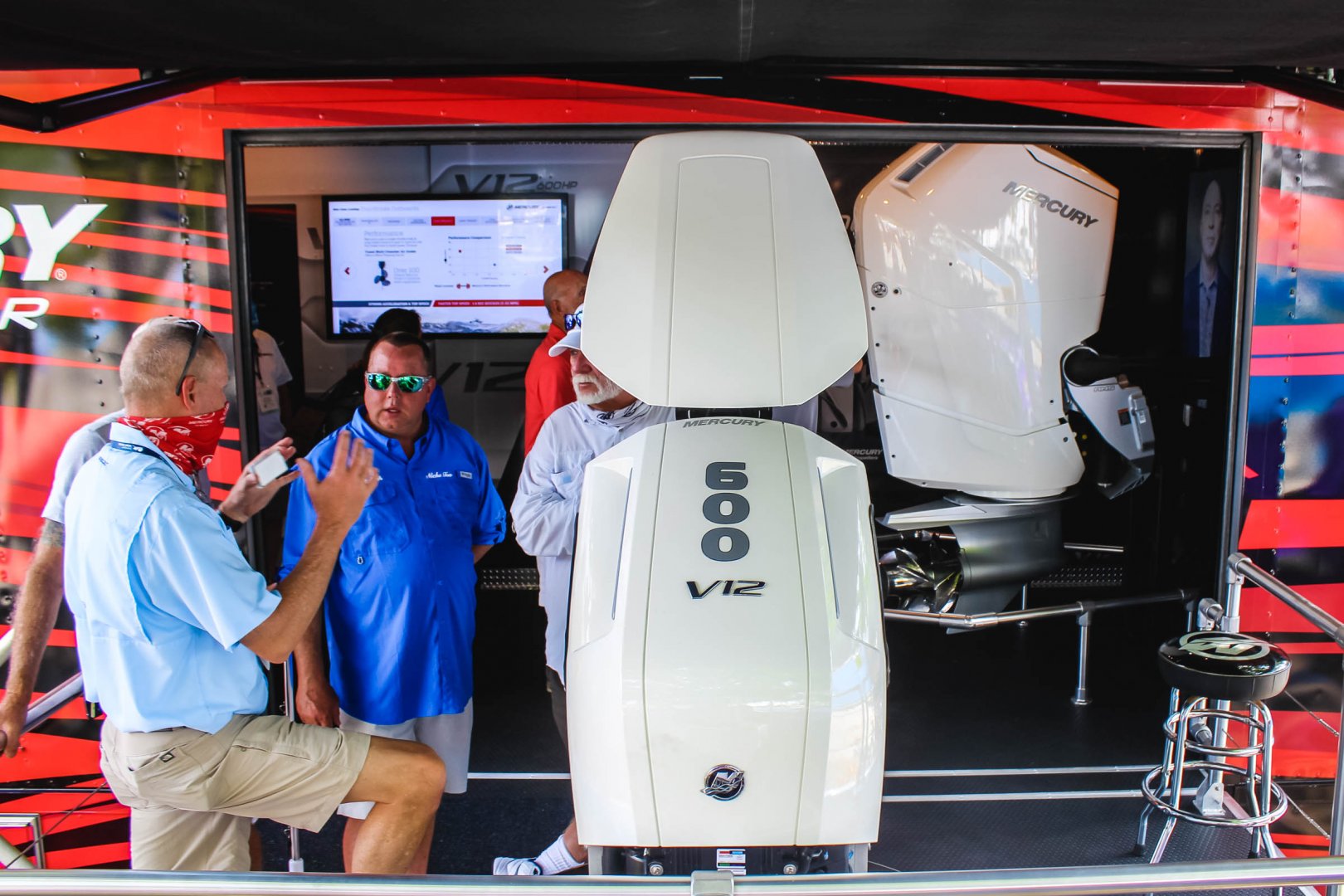 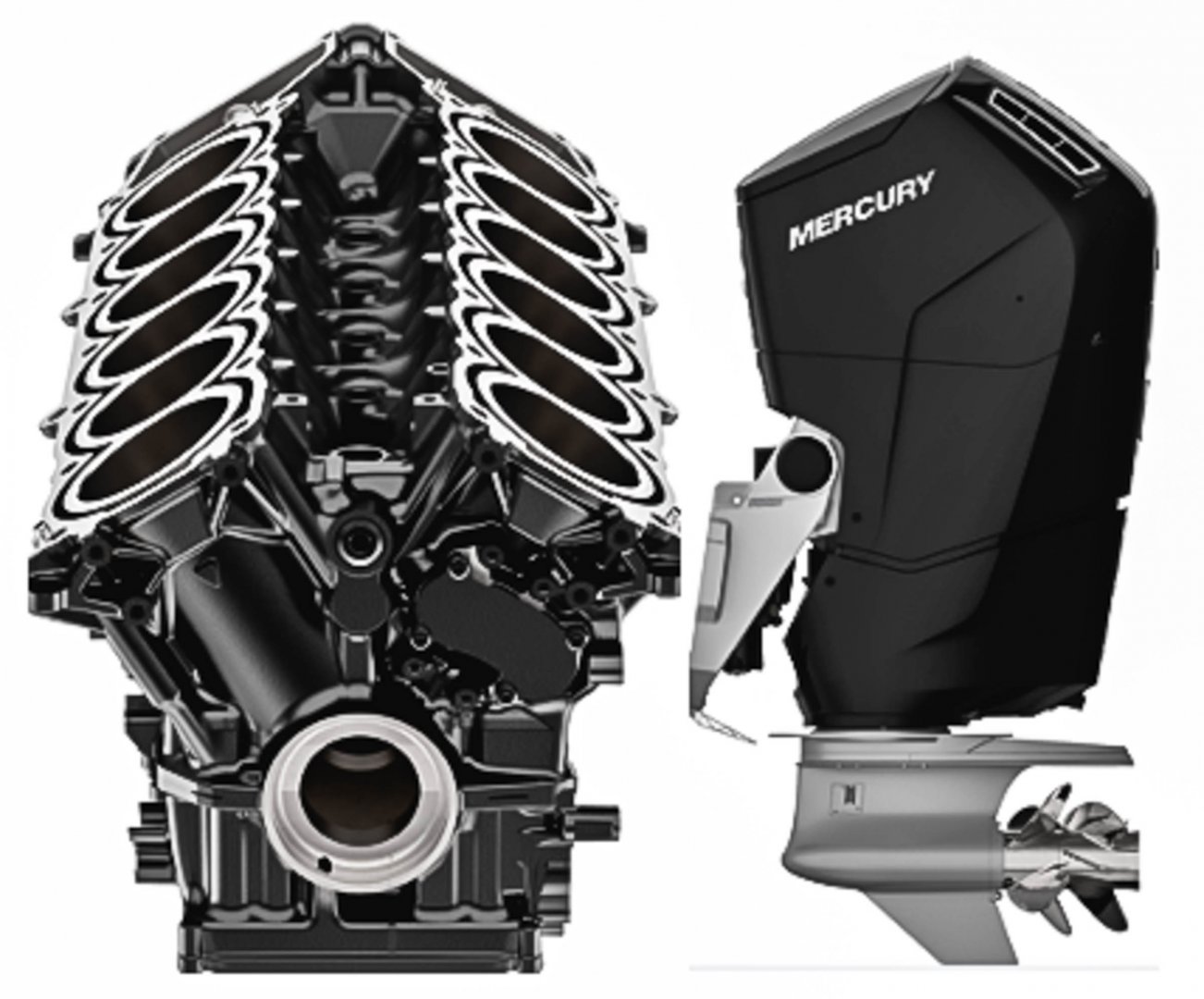 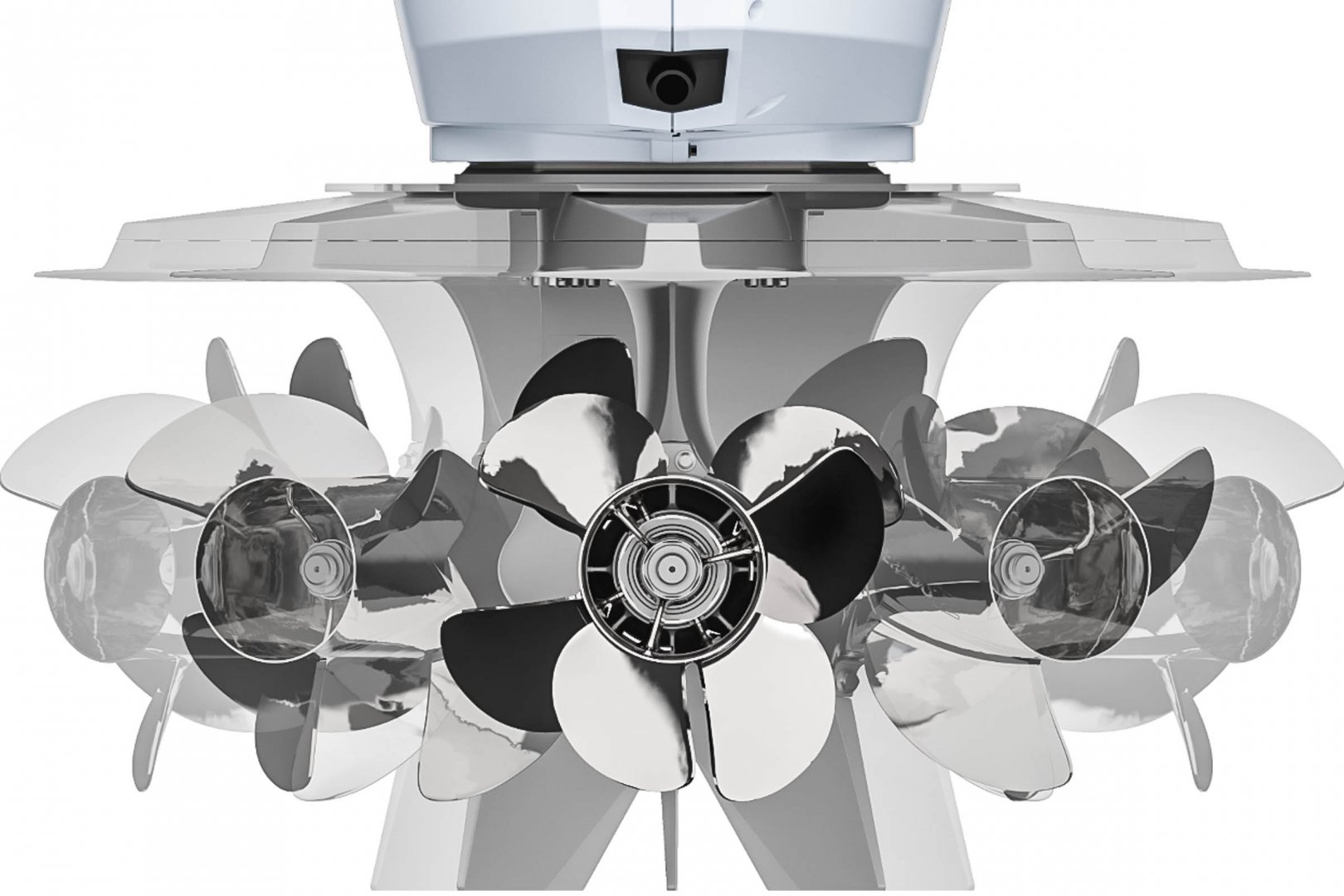 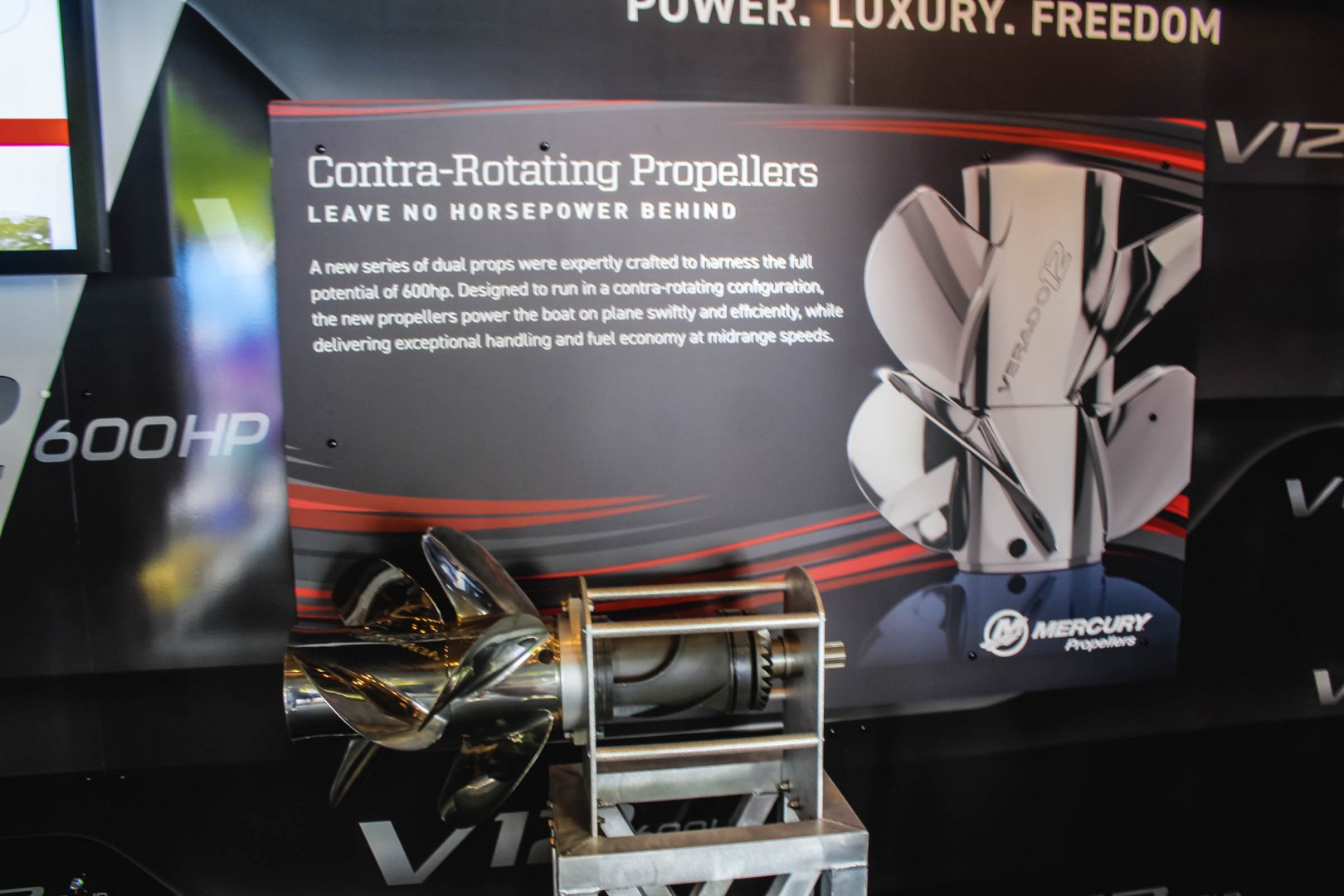 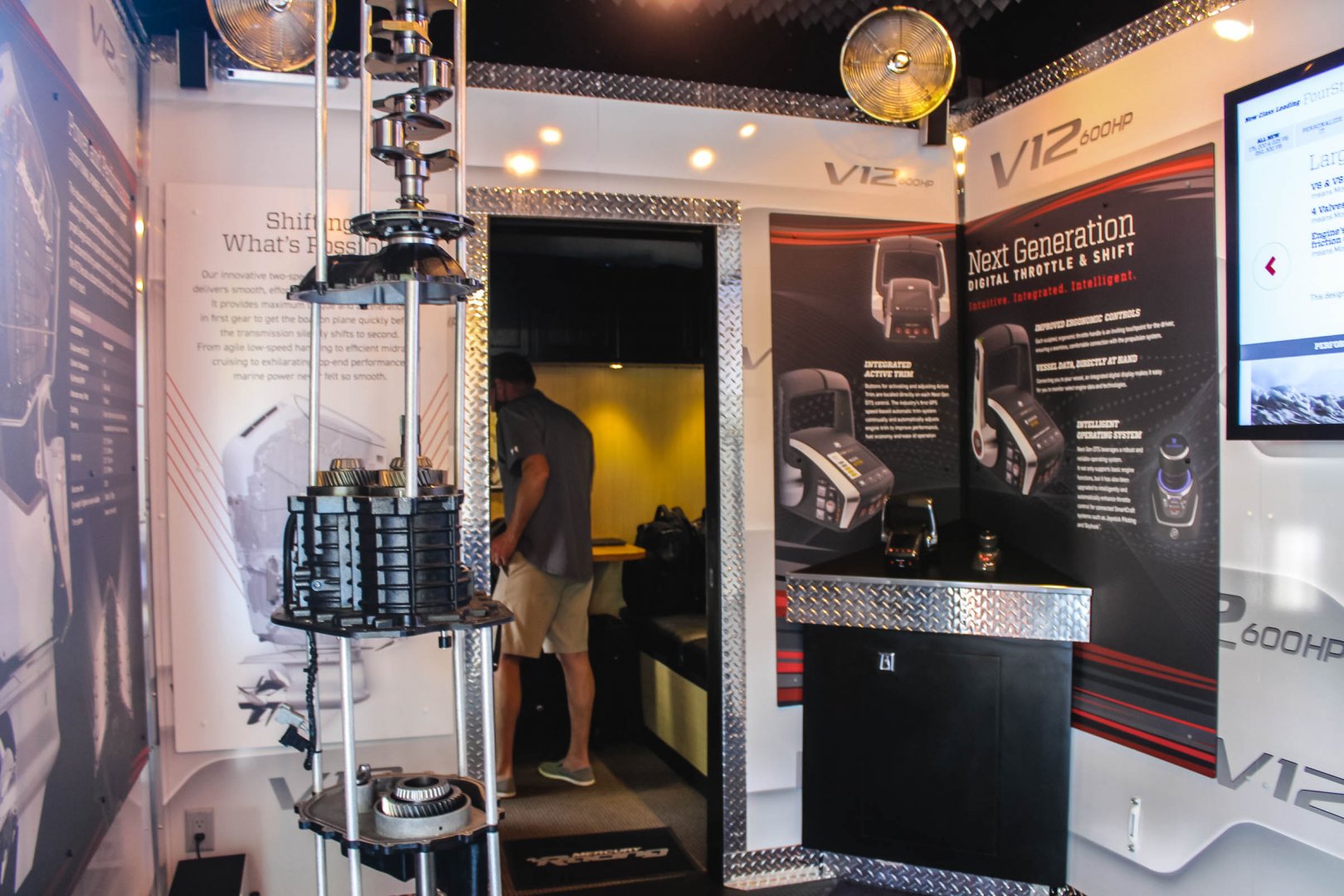 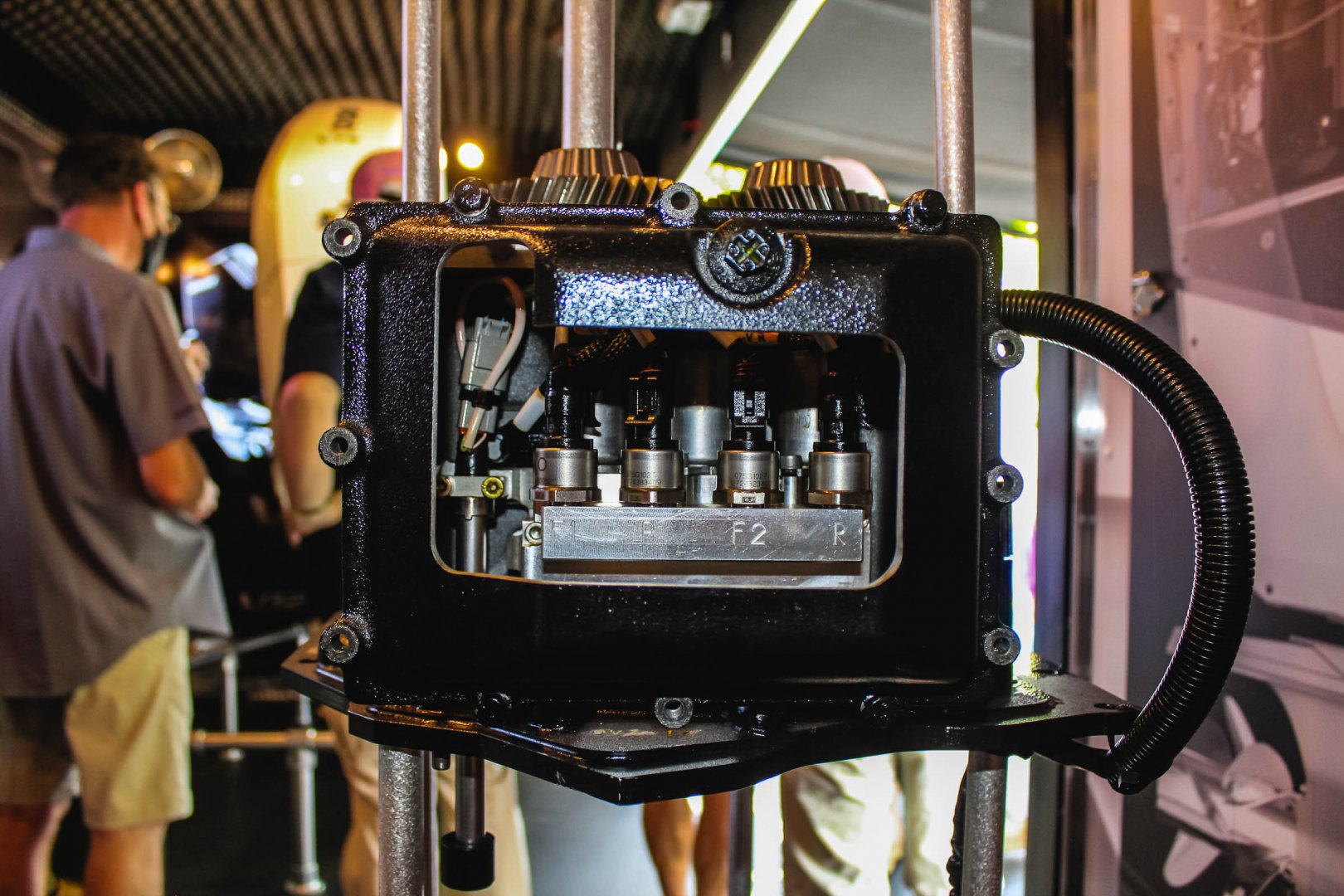 Swarming in innovation beyond size and horsepower following five years in the making, the V12 Verado is the outboard segment’s first steerable gearcase and industry-first, two-speed transmission that shifts automatically. With the powerhead or part of the motor containing the majority of the weight in a space-saving position fixed to the transom, only the lower gearcase below the water line independently swivels 15 degrees more than standard outboards at a full 45 degrees from side to side.

As a result of the gearcase and fixed-powerhead setup with dual contra-rotating propellers; the wider increased angle and extra latitude; and because there is no movement above the water from the engine, handling and control have been enhanced with faster steering capabilities, more clear-cut maneuvering at slower speeds and easier docking duties. Torque and acceleration dealt out from the automatic two-speed transmission optimize engine rpm according to workload. With a 20 percent reduction in gear ratio, first brings the heavier boats up on plane, before a silent shift into second gear lessens the load for better and efficient performance cruising and high-end haulin' the mail moments, not to mention, drops the rpm for improved fuel economy.

Naturally aspirated and weighing in at 1,260 pounds (the 450 weighs 689 pounds for comparison), the biggest outboard block in stock drinks fuel efficient 87-octane and stickers at $77,000; perhaps the three-year limited warranty will ease the wallet-lightening wretchedness. Maintenance is a beautiful thing too. First, thanks to the "forward-thinking" addition of a top cowl that opens with a push of a button on a gas strut, servicing is a cinch and owners can enjoy 200 hours of running between oil and automatic transmission fluid changes which happen to included color-coded fills and dipsticks to guide you; secondly, there is no need to remove the cowl until in-depth servicing requirements after 1,000 hours or five years of operation.

The wow factor continues thanks to streamlined rigging techniques resulting in a compact footprint whereby engineers were able to conserve space on the transom. The slim motor mounts on a 27-inch center, which is only one inch more than is required with other multiple outboard installments. 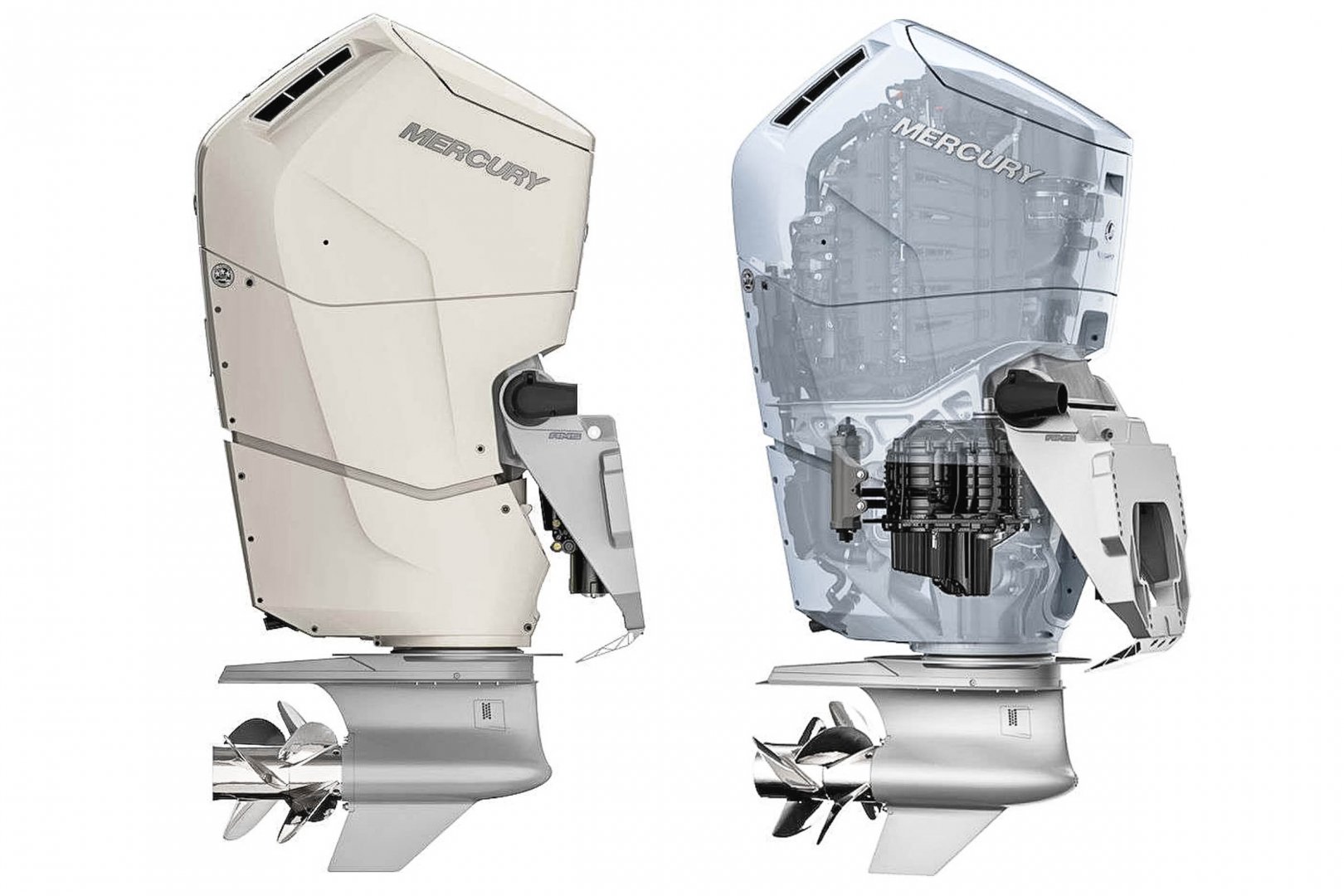 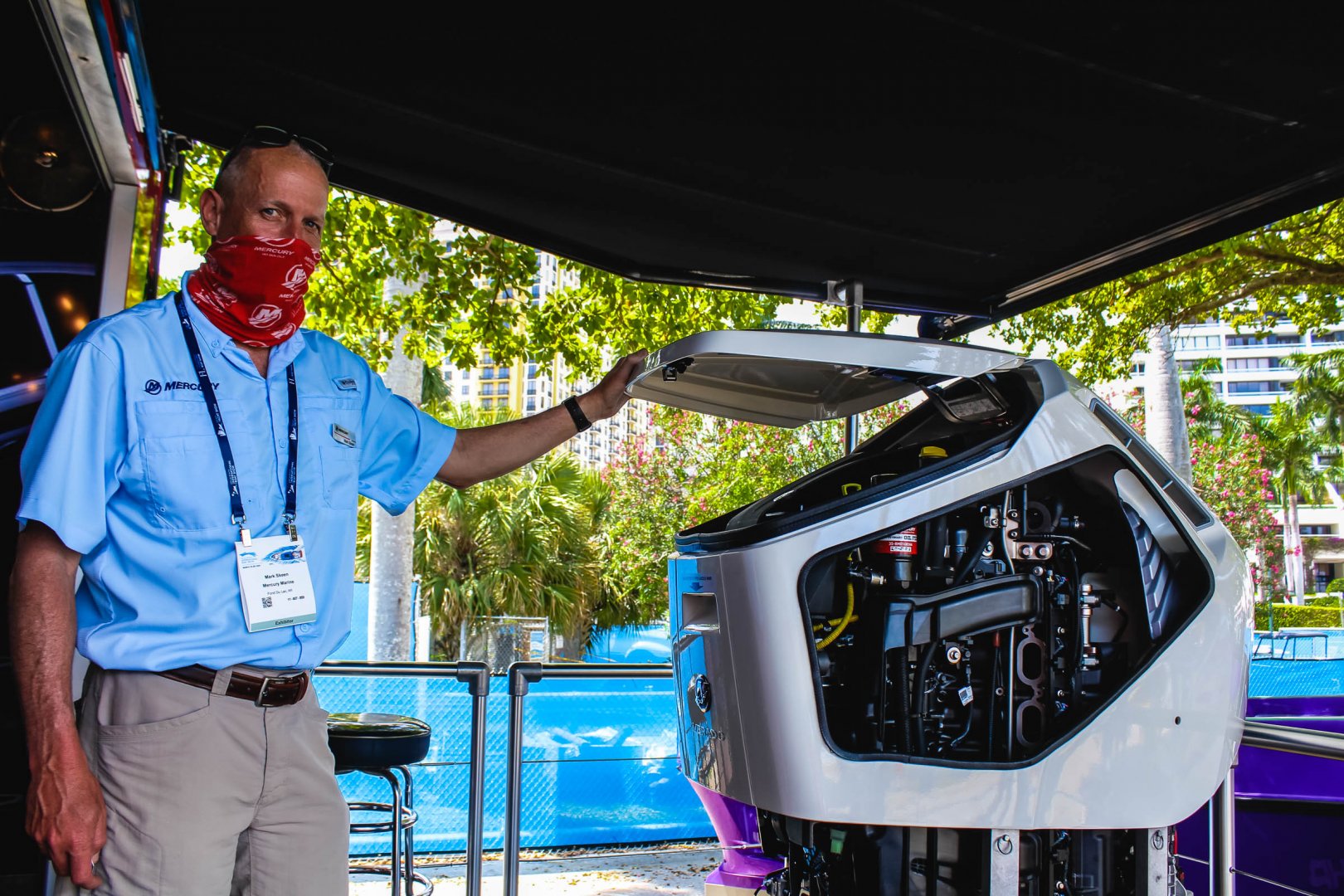 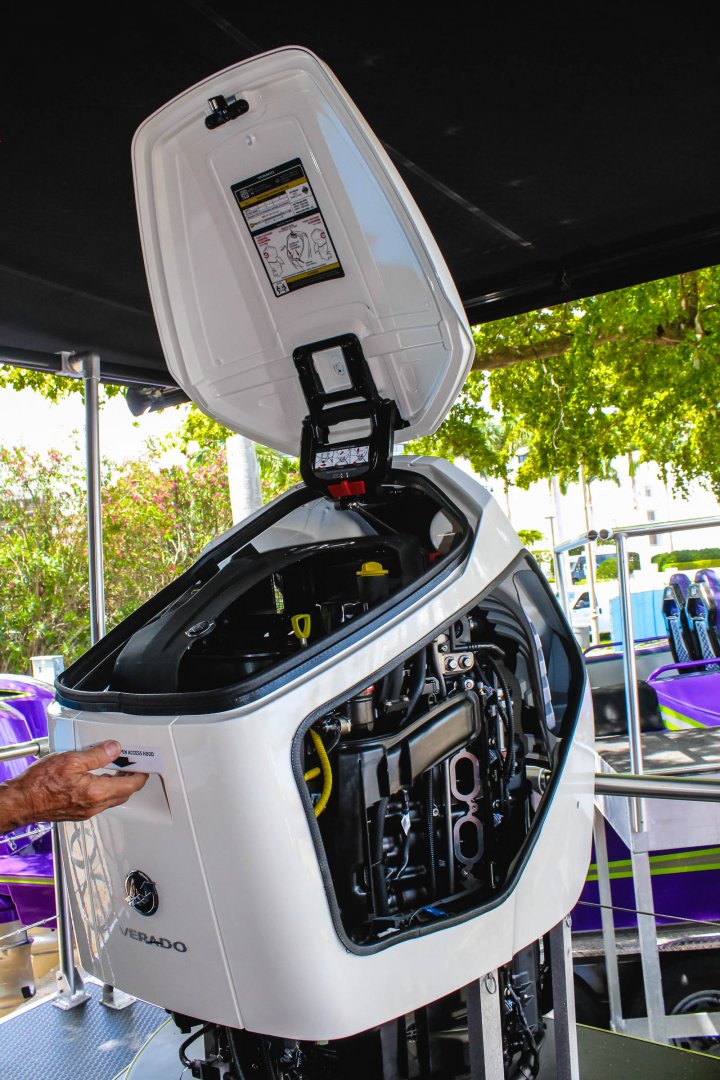 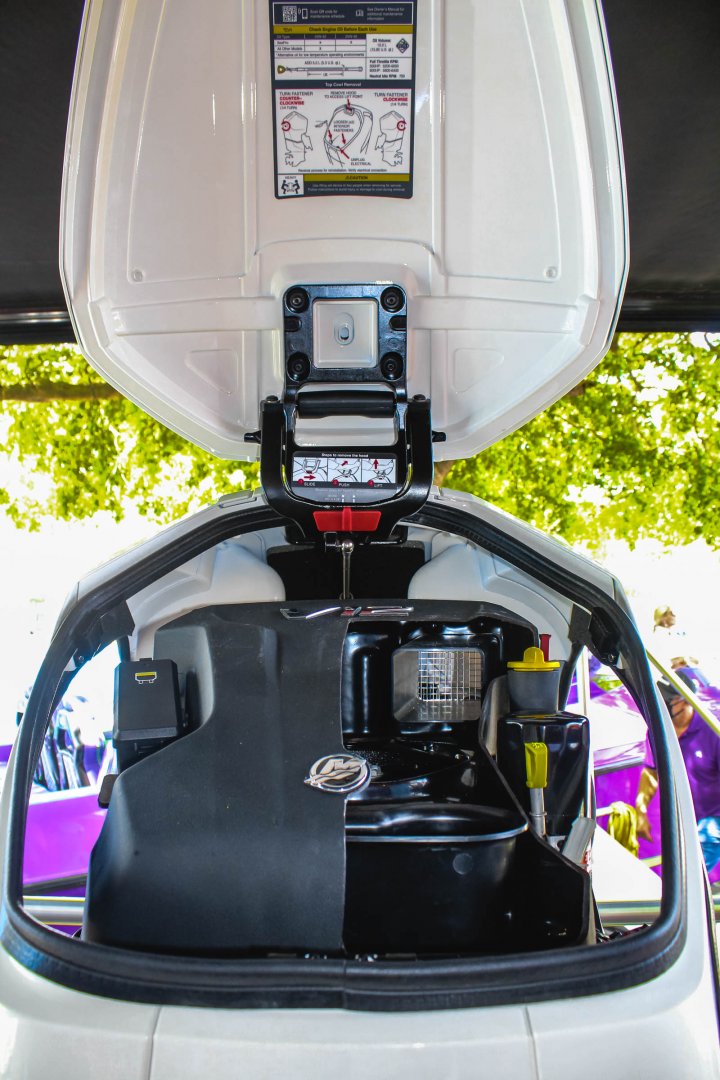 Nobody sums it up better than Chris Drees, the president of Mercury Marine, "The V12 Verado outboards deliver boaters unrivaled freedom, luxury and power to pursue their passions on the water." So whether you're causing a commotion in the ocean propelled by the Mercs which Drees was referring to above – or putting your Seakeeper to work removing the motion from the ocean, both Palm Beach show product offerings prove they go boldly... bringing you and yours nothing but a good time! 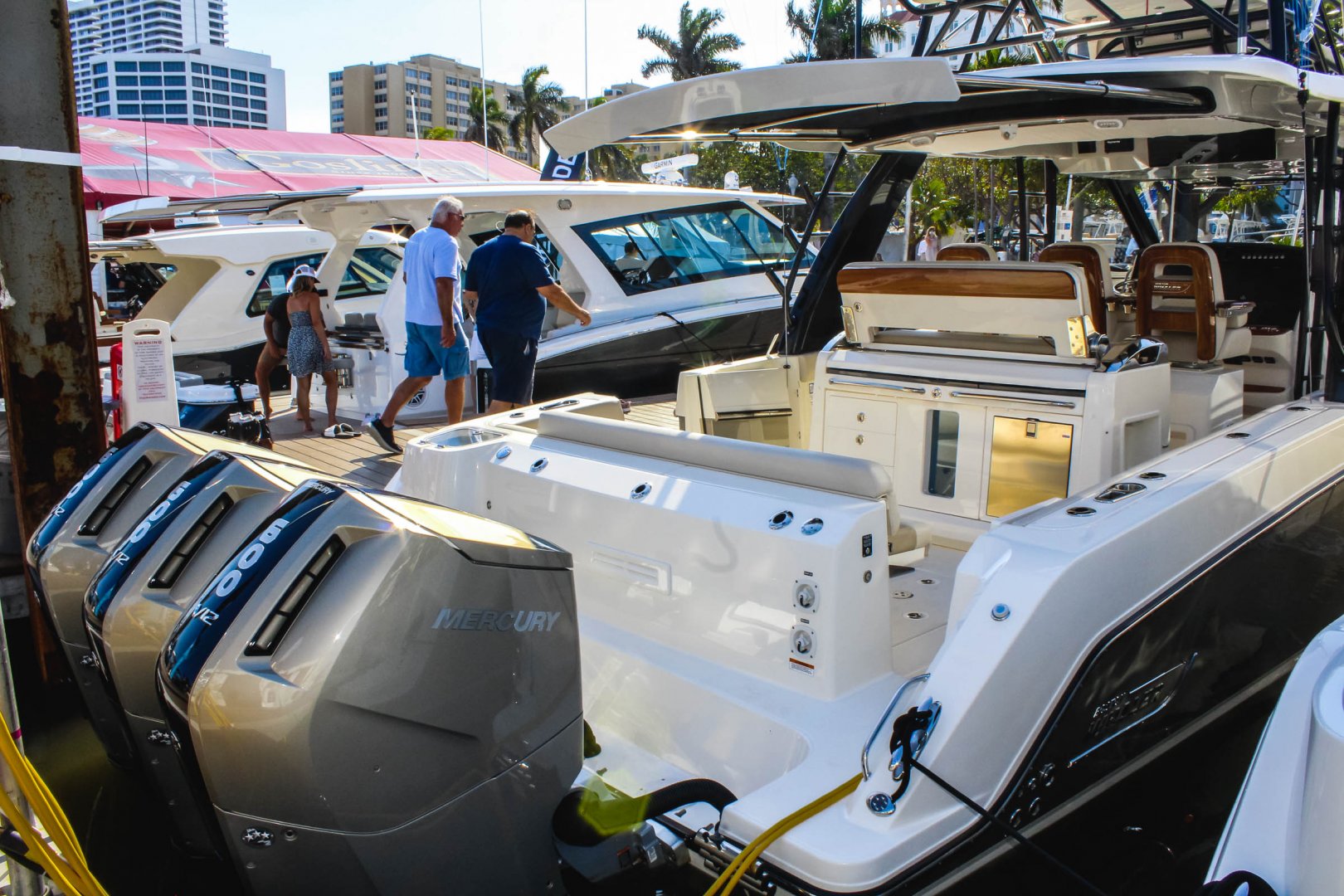 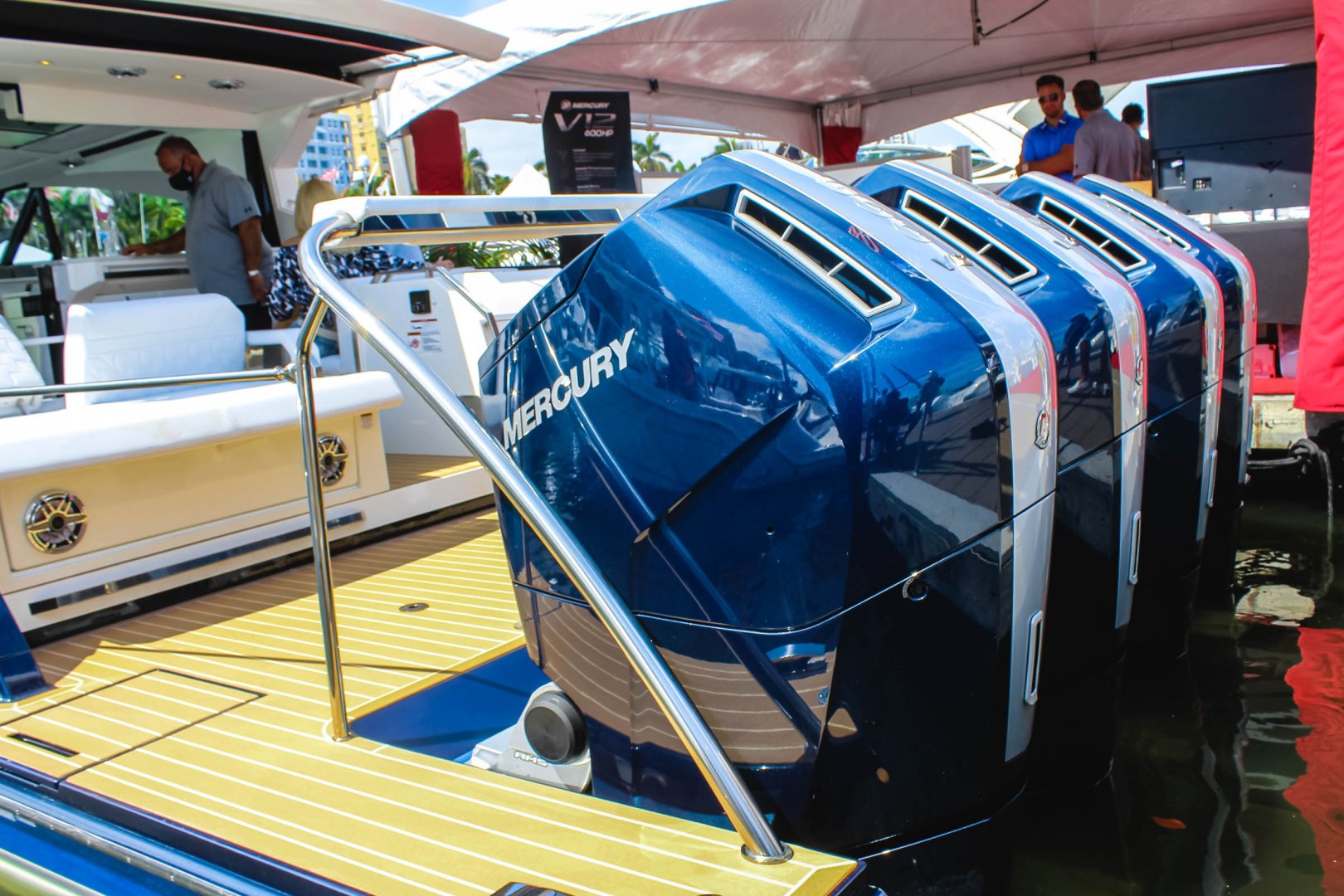 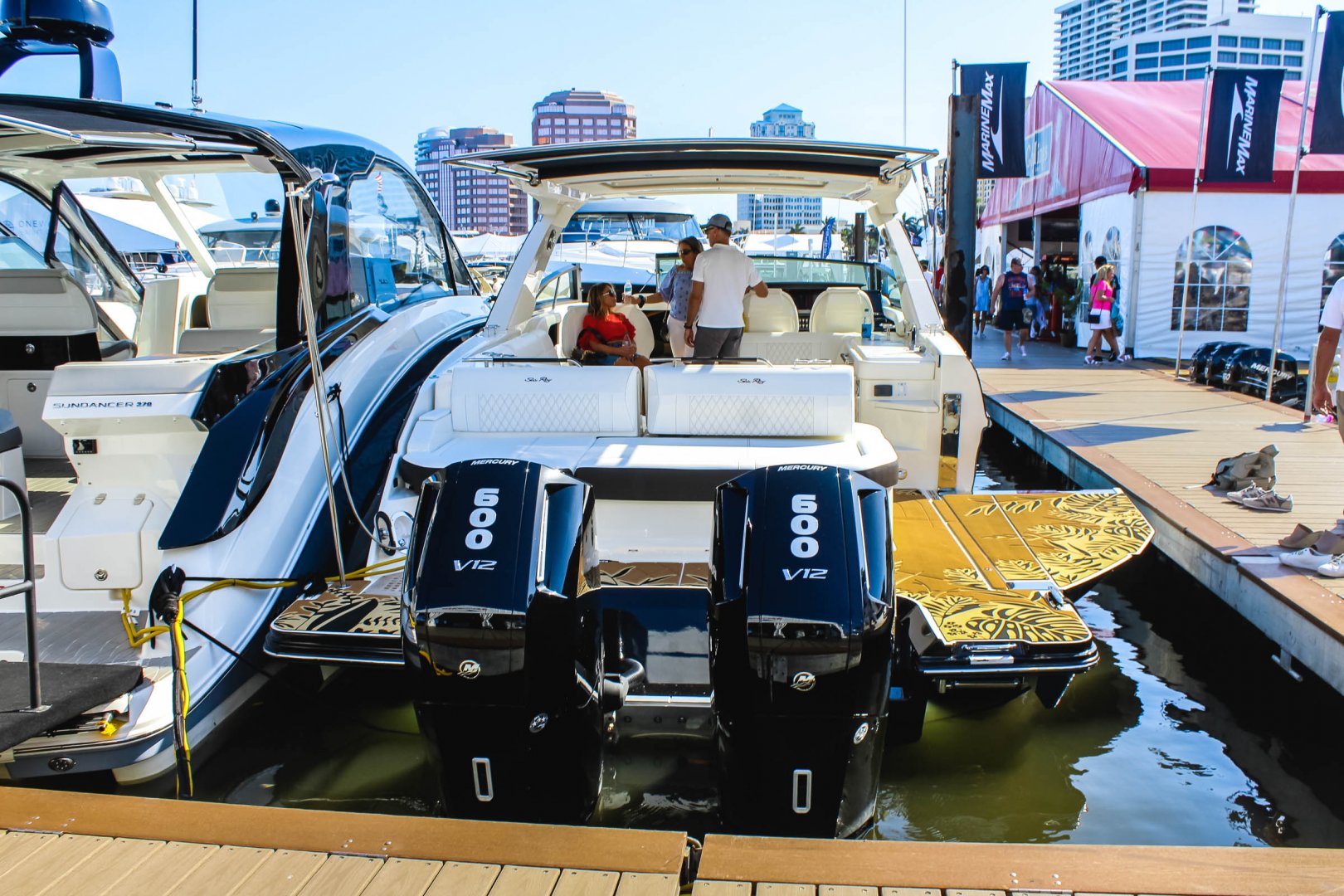 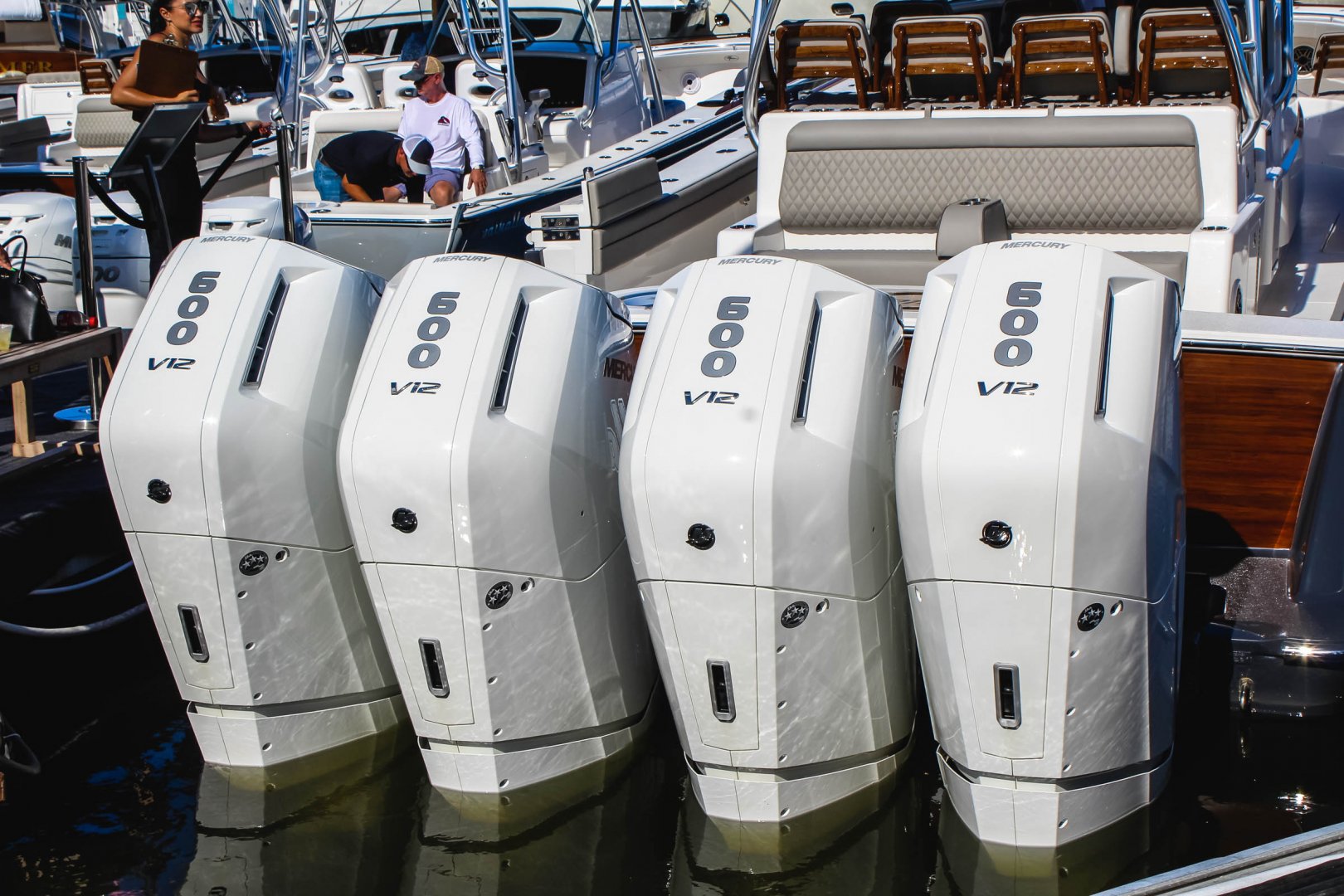 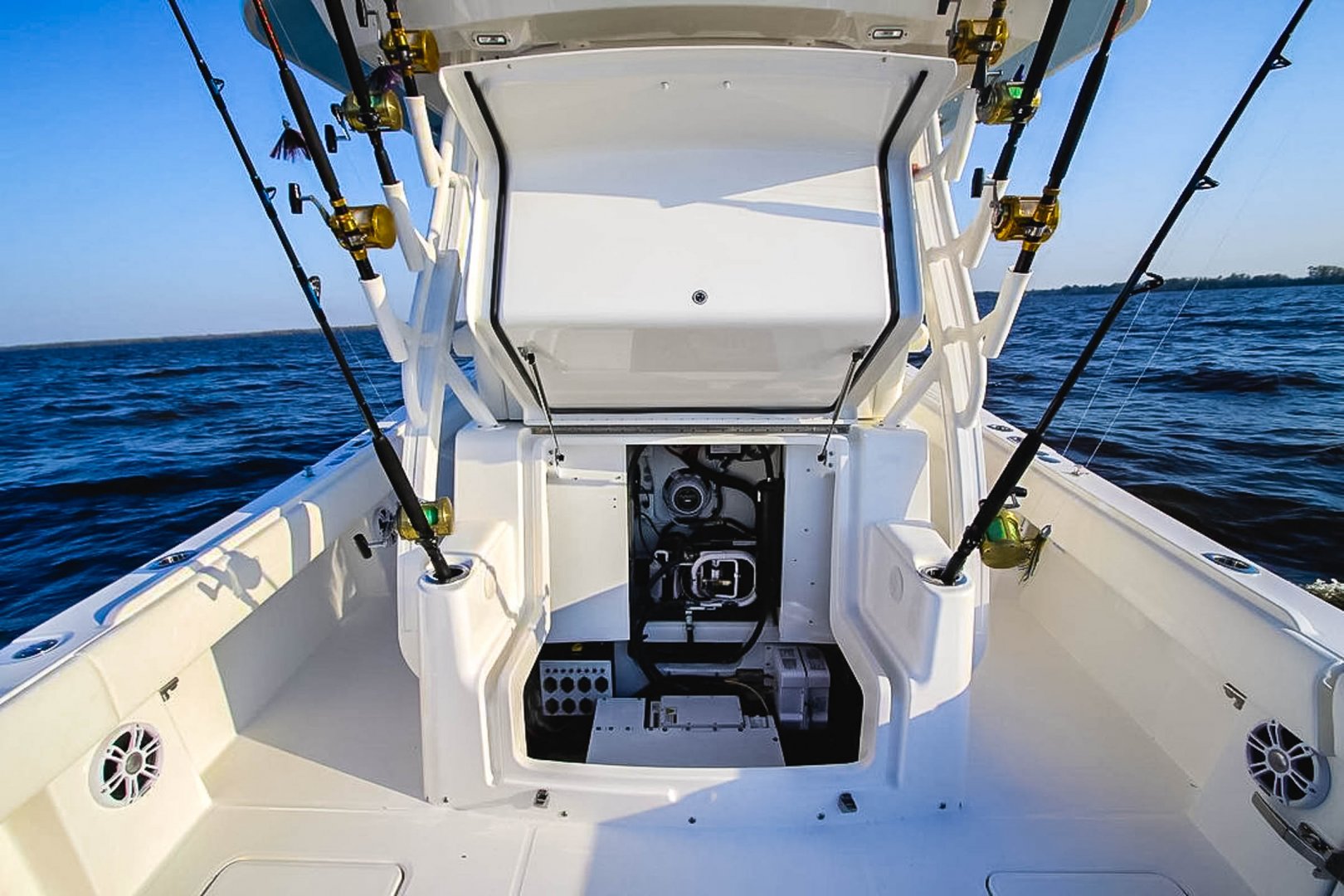