From 1974 to 1976 I was working for Hondo Boats in the San Fernando Valley selling boats. I was also driving any kind of race boat I was allowed to. Among them “Crazy Horse”, “Rated X” and others. I had pitched Peggy Ann Brendel that it would be a good idea to build a K-jet race boat and that Gale Banks would supply a motor. She mumbled an okay and before she changed her mind we commandeered a production hull out of the line that happened to be yellow with red metal flake.

Gale Banks provided a Comp-jet normally aspirated motor at first and Barry Lieberman of Hardin Marine provided us a Jacuzzi pump. Gale said he wanted to develop a turbocharged motor but we would run Comp Jet to sort the boat out. We ran it a couple of times but were a bit frustrated. I could usually nail the starts fairly well and gain a few boat lengths and get the inside but would soon be passed because we lacked top end speed from our stock hull. 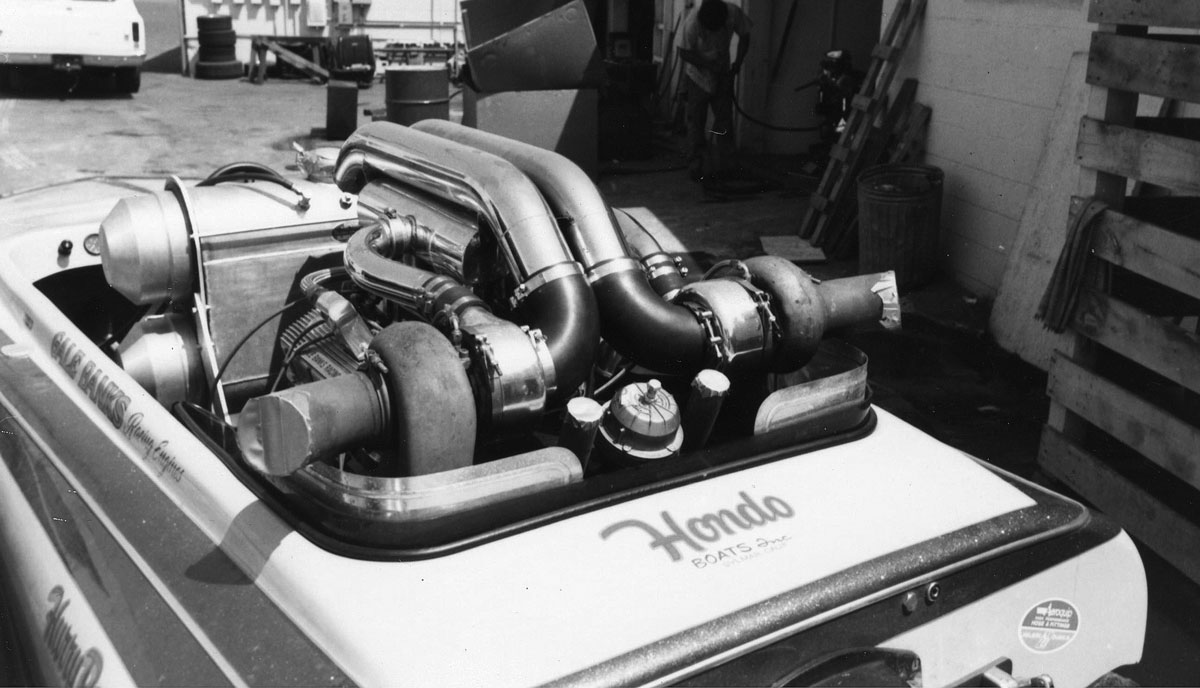 Gale then built the turbo motor. It had dual Air Research Turbos and Hillborn injectors never before coupled together in a boat. In true Gale Banks tradition we were late getting to the first race at Firebird Lake in Phoenix and only had a few minutes to run a few laps before the race. We left the trailer on the ramp and I would run a lap and crash the boat on to the trailer while Gale would jump on the deck and I would give him all the readings from the gauges. We would tweak and run another lap and do the same thing trying to get it ready for the race in a compressed time frame.

After the first lap I told him the boost gauge read 39 inches and his eyes got big and he told me anything over 29 inches would blow the motor up. He made me make another lap to confirm and sure enough it was 39. Gale drilled big holes in the manifold to relieve the boost pressure but we couldn’t get it low enough at full throttle. We then figured that I just needed to watch the gauge and not go over 29 inches during the race. We went and got a Coke can and taped it under the throttle pedal and ran the race that way. Each lap I crushed the coke can a little more but managed not to blow the motor up. I think we might have won but some of the competitors broke. I was told we ran over the course record but the class was light of competitors. Gale said the motor slide ruled out with over 3000 HP. I didn’t believe him until I drove the boat. It was an absolute animal and I could drive by anyone out there.

Long Beach Marine Stadium races came quickly and Gale installed a big waste gate to control the boost and it worked. Phoenix is a long course with big sweeping 5 buoy turns so the turbo throttle lag was not too big a problem. Long Beach is a short course with two single buoy turns. It turned out that with those huge turbos the throttle lag was a big problem. I found that I could set the boat up for the turn and lift off the throttle very early and then get back to full throttle before ever starting to turn the boat. I would count to three then the boost would kick in and all hell would break loose. As long as the boat happened to be pointed in the right direction it would accelerate like being shot from a cannon. If the boost came too early we wouldn’t make the corner, too late and the boat would spin out for lack of intake suction during a turn. I managed to get it figured out and we just about lapped the field during a five lap race. Towards the end of the race as I slowed for the turns about a hundred gallons of water would crash by me and run to the bow. I figured we had a bit of a leak and went ahead and finished the race. I guess we won and I read from the cover of Boat News that we had broken the 1600 Meter Closed Course K-Jet World Record. I never followed up on the documentation; all I wanted to do was drive.

Upon examination we discovered that the motor made so much power that it melted the thrust bearing on the front of the pump allowing the impeller to start to machine itself out the front of the casting thus all the water. The drag of all this friction must have been huge but the motor liked more load and I never felt it. Hardin gave us another pump but the same bearing. Time was short to the next Long Beach race so we attached a big pump action grease gun next to the driver’s seat with a line to the bearing. The plan was to give two pumps of grease on each straight away to try to make the bearing live. It worked fine and we finished this third race but a driver error cost me the win.

Our two biggest competitors were Chuck Collins in a boat named “CC and Water” and another boat named “PS No Excuses”owned by Dan Durham. Both are great people and had been working hard running the whole season spending a lot of money and energy. We were the “Johnny-come-lately” in a position to spoil all their hard work with running only three races. They also didn’t like getting lapped. Chuck told me later that they had a plan. I felt flattered and didn’t blame them at all after the fact. They knew I would try to take the inside and that I was always on the edge at the start. Chuck took the beach lane and about 100 yards to go lit it up and threw a big rooster tail covering the timing clock. PS must have known what was going to happen and waited but when I couldn’t see the clock any more and took off after Chuck. I passed him by the first turn and again lapped the field but was disqualified for jumping the gun. PS was just cruising around the whole time while I was madly passing boats not knowing he had won. Our motor had to have had at least a 500-1000 HP advantage. 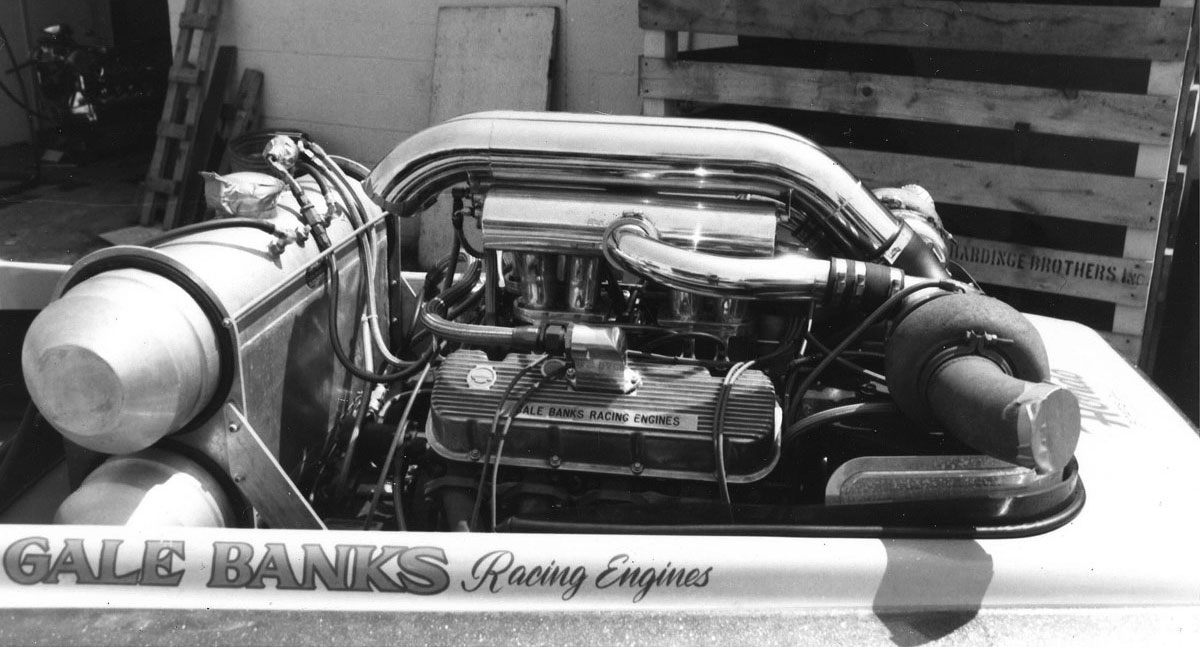 Up until then I had been driving a Blown Fuel Flatbottom which had a Top Fuel motor in a flatbottom boat and accelerates from zero to 150 mph in a few seconds. “Hurry Round Hondo” would have out accelerated anything I had ever driven and was like driving a Roman Candle. Gale had made his point and decided to bag it for a while and go make some money to pay for all of this.

I was still anxious to drive anything that floated and convinced Ken of Ken’s Automotive (state of the art race engine builder in Chatsworth, CA at the time) to put one of his K motors in this boat. He said fine and we installed a blown alcohol Chevy with a mere 1500+ HP. Beggars can’t be choosers. Ken is a great guy and spirited competitor and actually told me that if I were towards the end of a race and needed some power to slowly pull the fuel shut off and the motor would lean out and make more power just before it blew up. He really wanted to win.

We would be smart this time and test the boat at a drag race at Bakersfield before we circle raced it. The promoter had arranged for a field of the very popular K-Boats to run at this event. In order for the K-Boats to get the money they needed 6 boats to run but they only had five. Since we were a K-Jet and considered slower they asked us to run so they would get their money. We said fine.

Bakersfield was a temporary course that was a triangle with one long straight and three turns. We started out and I figured I would just sort the boat out and stay out of their way, but the adrenalin took over and I figured out that I could take the crooked side of the course by rounding out the whole leg and not lifting off the throttle. Everyone else treated it like a three straight away course with three corners. I only made two corners and two turns with one straight away and the other a big full speed arch.

I won my heat on Saturday and then caught and passed all but one of them, a guy named Leo Bonner, on Sunday during the final. These were the big guys. Ron Bolton was there and the living legend, Julian Pettengill. Unfortunately Julian had broken something and didn’t really run. They didn’t like it at all and I read an article in Boat News where Leo Bonner said it was a fluke and that he could beat us on Geritol. At that point it got a little personal so when they invited us back to the next race were happy to oblige.

It was fun to have Boat News make a big deal out of it. These were all great people and dedicated racers but now it was “on”. When we came back the second time we passed all of them and won both heats. They never figured out that it was better to make a big curve and not lift off the throttle, than to turn hard and go straight for the short side straightaways.

Peggy had been running her “Shock Wave” Top fuel hydro and until Bakersfield really didn’t know what we were up to and was irritated with the yellow and red. The Hondo factory colors were yellow and blue so she built a second Hurry Round Hondo that was yellow and blue and tricked out and stronger. It never ran as fast as the original. 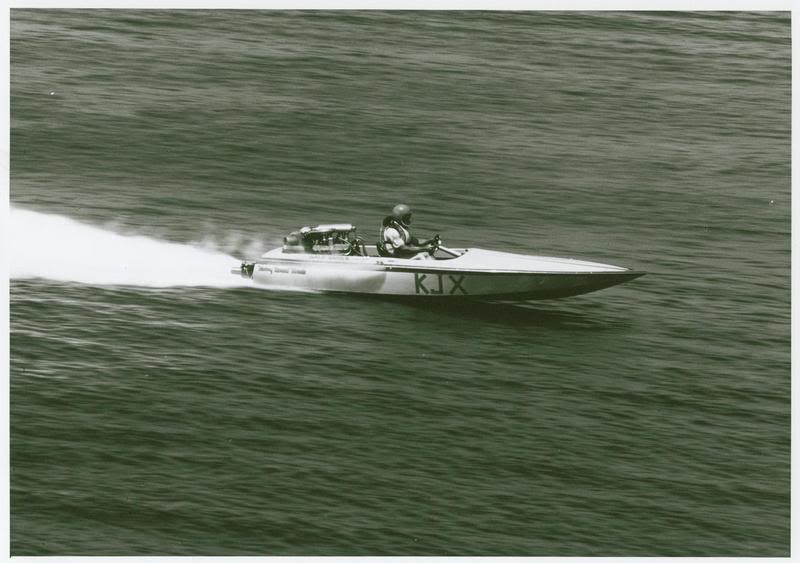 The stars had aligned to create an opportunity for Gale Banks to drive technology several steps forward. Some odd circumstances and a puzzling course configuration, allowed us to beat the odds. A lowly jet boat beat the big time K-Boats. There happened to be a big crowd at this event and as I passed the last K-boat for the win I could hear them erupt over the noise of these monstrous boats. The back of our boat was covered with blow by oil so I shut it down on course for a tow and the crowd went wild.

I have enjoyed a few wins in various forms of racing, but this was by far the most invigorating win I have ever been lucky enough to participate in. It was a moment in the sun that I enjoy to this day, a real David vs Goliath with the K Boats. It was also an honor to be associated with Gale Banks as he set out to prove something that caught them all with their pants down.

Soon after, I started Centurion Boats in 1976 and went on to a full career in car racing competing in SCCA, ACRL, Trans Am, and Grand Am. These were crazy times of buccaneers. The Hurry Round Hondo was something exotic, like Jim Hall’s Chaparral Can Am car that blew everyone away for a short time with an exotic advantage. It was a magical boat during a magical time in a magical place.
Reactions: HGP3, quartermileman, DUN and 26 others