Article Reviews (1) Gallery
As we ramp up to the Lake Of the Ozarks Shootout, we wanted to take a look back to 2013, which we consider to be one of the best years of the event!

It’s become performance boating’s most important mile. And why not? After 25 years, the Lake of the Ozarks Shoot-Out competition is the place where the ‘age-old’ question, “Who’s fastest?” is put to rest. In 2013 there was simply no doubt. Not when a number like 224 miles an hour flashes across the screen of the then vastly and recently improved LOTO radar system. If you were looking for an extra special reason to celebrate a 25th anniversary, this and a bushel basket of other outstanding performances did the trick. 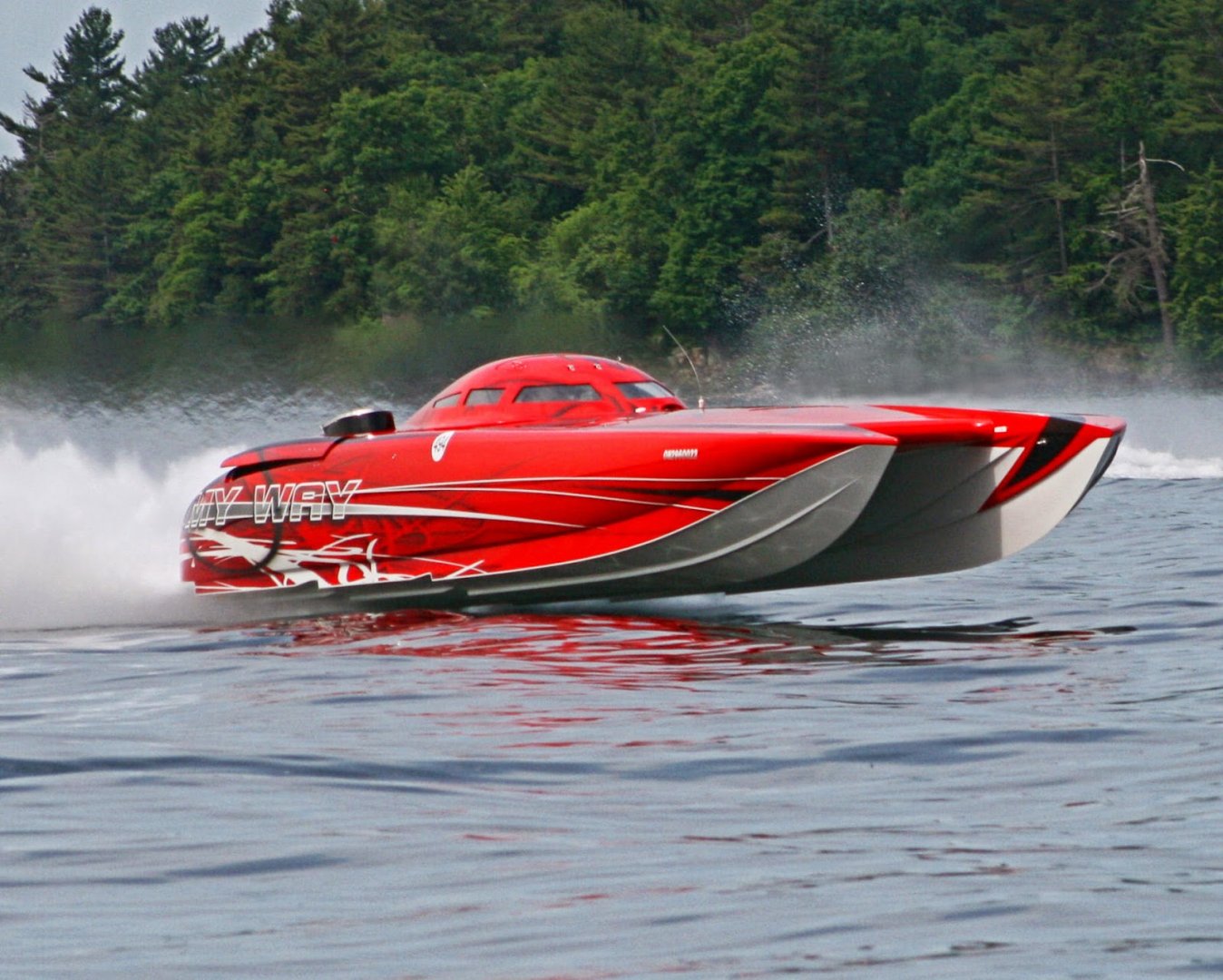 For Bill Tomlinson, owner of “My Way” the 50-foot canopied Mystic cat with twin T-5507 Lycoming turbine engines (approximately 3,000 HP each), the Top Gun prize had to be vindication for extraordinary persistence. It was a year ago that “My Way” was considered by many to be history after suffering extensive hull damage during the 1000 Islands Poker Run. “We just couldn’t give up on her,” said Tomlinson after the mishap. “It took a thousand hours to rebuild her, but it’s now all worth it.”

Tomlinson is no stranger to high speed, however, having notched a Top Gun credential at the 2011 LOTO Shoot-Out with an eye-opening 208 mph mark.

Tomlinson and throttle person Ken Kehoe served notice early at the 2013 LOTO event that they would be the one to beat. On Saturday, “My Way” took to the course early and put down a perfect 209 mph pass to tie the all-time LOTO speed record held by David Callan. After the run was over, Tomlinson and Kehoe seemed confident that there was more to come on Sunday. 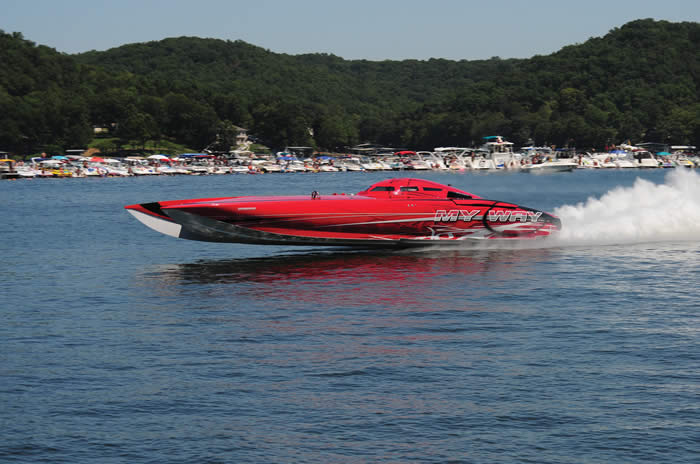 Again, being one of the first out on the course in the morning, “My Way” spooled-up its powerful turbines and the bright red Mystic cat took a perfect set blistering the LOTO mile long race course with a spell-binding 224 mile an hour top speed. During post-race interviews, Tomlinson commented that their mission was to push the LOTO mark way up there and give everybody something to shoot at. He also remarked that “My Way” still has something left in reserve, quite possibly a run in the future to exceed 230 mph. LOTO 2014 is already starting to get interesting. 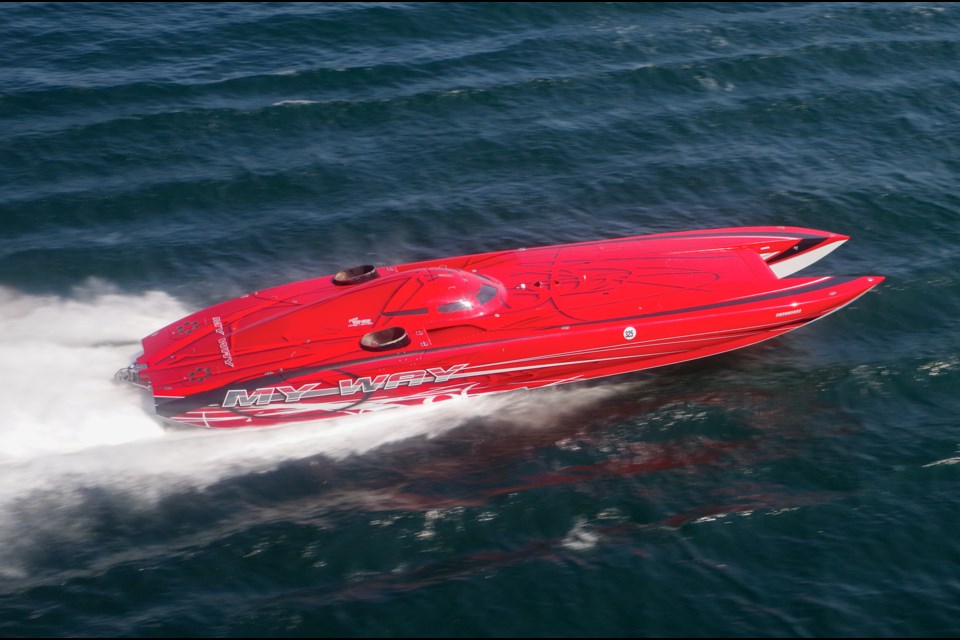 Sometimes, the toughest competition is yourself. That’s what Outerlimits owner/president Mike Fiore found out first-hand. Fiore had two of his potent creations dockside at Captain Ron’s battling for Top Gun honors in the vee-bottom category, and he was riding in both. At the end of the weekend, it was Joe Sgro’s enclosed canopied SV-43 with twin 1350 Mercury Racing engines that held on for a 152 mile an hour record setting victory, edging out the brand new open cockpit “GottaGo 2” SV-52 of Dave Scotto by a scant two miles an hour. Fiore was elated by the one/two placing as the fastest vees in LOTO history. “Having the first two vee-bottoms to exceed 150 miles an hour is incredible,” said Fiore back at Captain Ron’s marina. “I’m especially proud of the new 52 with twin 1650 Mercury Racing engines. It’s a pleasure boat, not a race boat. How neat is that.” 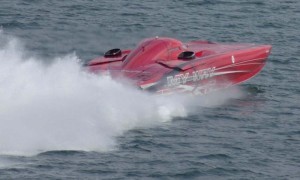 Also feeling pretty pleased with their LOTO performance was the Buck Stracener and Louie Marchese duo who again dominated the single engine stern drive category with their 28SS Nordic cat. Although they didn’t quite equal their 148 mile per hour winning speed of 2012, they were close with an impressive 144 mph clocking. Stracener and Marchese were running a GT Performance supercharged engine package with a new IMCO SCX4 surface drive propulsion system.

In 2012, the talk of LOTO was the 192 mile an hour pass by Greg Olson in his 33 Eliminator Daytona, earning him TOP Gun honors and fastest piston driven boat in LOTO history. This year, Olson opted not to compete but the piston boats didn’t disappoint. Mike D’Anniballe of Sterling Performance Engines more than took up the slack debuting his latest restoration project, a 36-foot Skater (formerly the Barcardi Silver offshore race boat) with new 1700 HP turbocharged engines. D’Anniballe put offshore throttle ace John Tomlinson in the boat along with Myrick Coil and they flawlessly negotiated the one-mile straightaway at a record breaking 195 miles an hour. 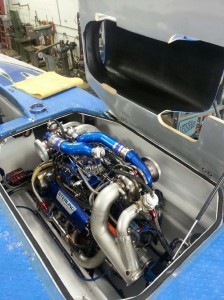 As unlikely as it may seem, competition in the pontoon class was and still is growing each year at LOTO. And as he has done several times in the past, Brad Rowland proved the man to beat in a 925CR SouthBay pontoon with a triple set of Mercury 300 HP Verado outboards hanging on the transom. Rowland, who last year set the new pontoon record at 112 mph found two more miles an hour and won the class and a new mark at 114 mph. And even the new era of performance center console vee-bottoms got into the act when Jared Morris took his Sunsation 34 CCX through the course at 77 mph with triple Merc outboard power.

Foreshadowing things to come, Don Onken’s brand new 50-foot Mystic canopied cat was finished just in the nick of time to make a LOTO appearance, and it was a good one. Rather than turbine power, Onken chose twin V-16 piston engines (3,400 total HP) and it was impressive at 186 mph with Mystic owner/president John Cosker on throttles and Myrick Coil in the driver’s seat.

Just prior to the weekend Shoot-Out, the LOTO organization and Ron Duggan unveiled a much anticipated LOTO Hall of Fame to commemorate the 25th Anniversary. Notable racers of the past inducted at the ceremony included former Top Gun winners Dave Callan and David Scott in addition to MTI owner/president Randy Scism and Bob Morgan of Big Thunder Marine along with several key volunteers who played important roles in the success of the event. If the first 25 years of LOTO is any indication, the next 25 are certain to be spectacular.