If you were the man in charge of your own private lake, wouldn't you have a boat? Of course you would! Meet Dave Noyes, former general manager of Serrano Water District in Orange County, California and hot boat enthusiast. Part of Dave's duties included the operation of Irvine Lake, a private pay-to-fish lake stocked with trophy trout and monster catfish located in the foothills just minutes east of some of Orange County's most exclusive real estate.

Dave got an appetite for fast boats back in the early 1980s when Irvine Lake played host to NDBA (National Drag Boat Association) drag boat events drawing some of the largest spectator crowds in the history of the sport. Sadly, the racing ended many years ago, but Dave's interest in fast boats never waned. 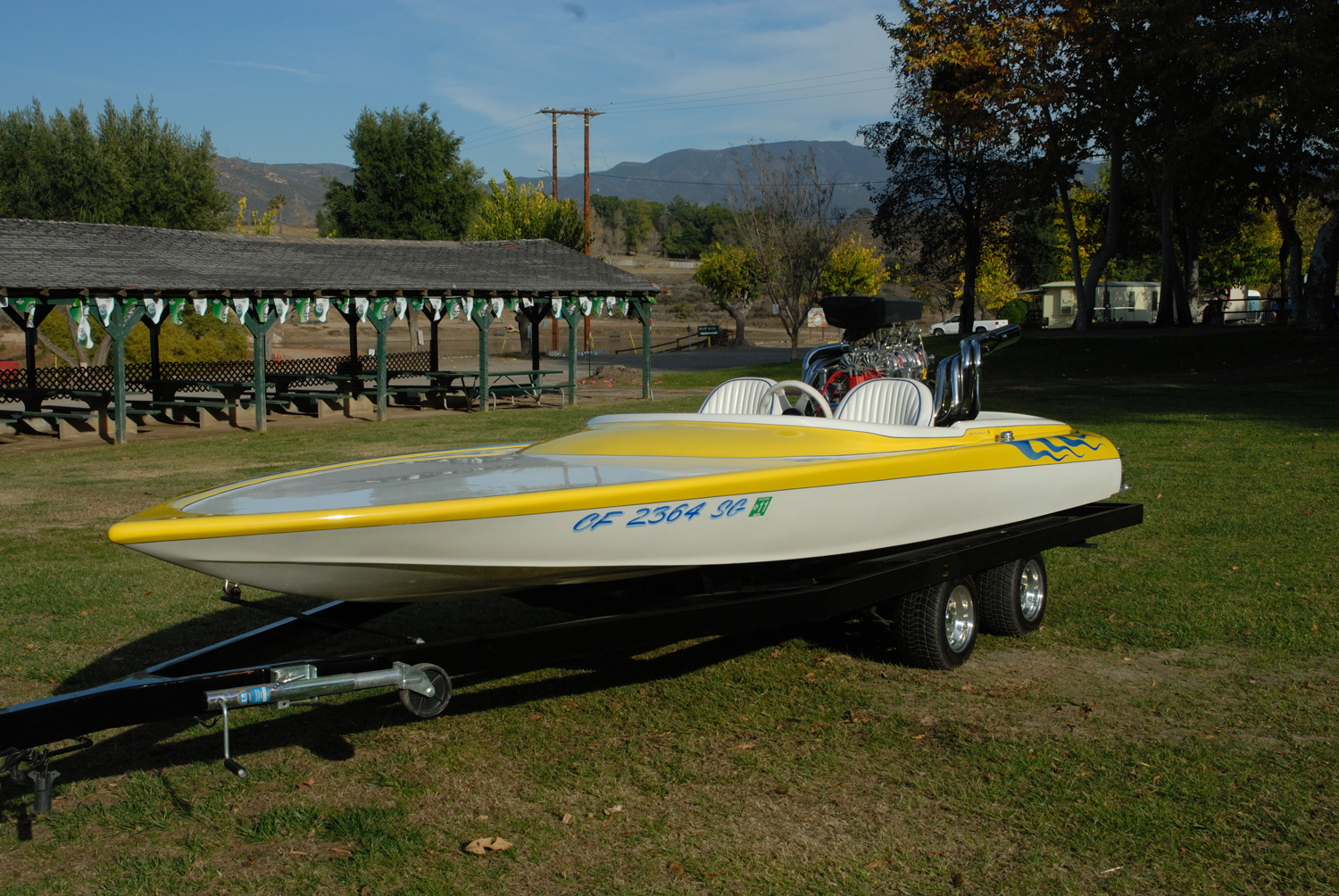 In late 2003, Dave decided to take the plunge when he found a rare 18-foot Eliminator Spider flatbottom for sale less than a half-hour drive from the lake. "I already owned an older Eliminator 21' Whaler which has been a great family boat but nothing like an 18’ V-Drive flatty," commented Dave. "I went over and looked at it and it was in pretty good shape I thought. I wound up giving $3,500 for the boat with a 327 small block Chevy and the trailer. When I got it home and looked a little closer, I knew I had some work to be done." 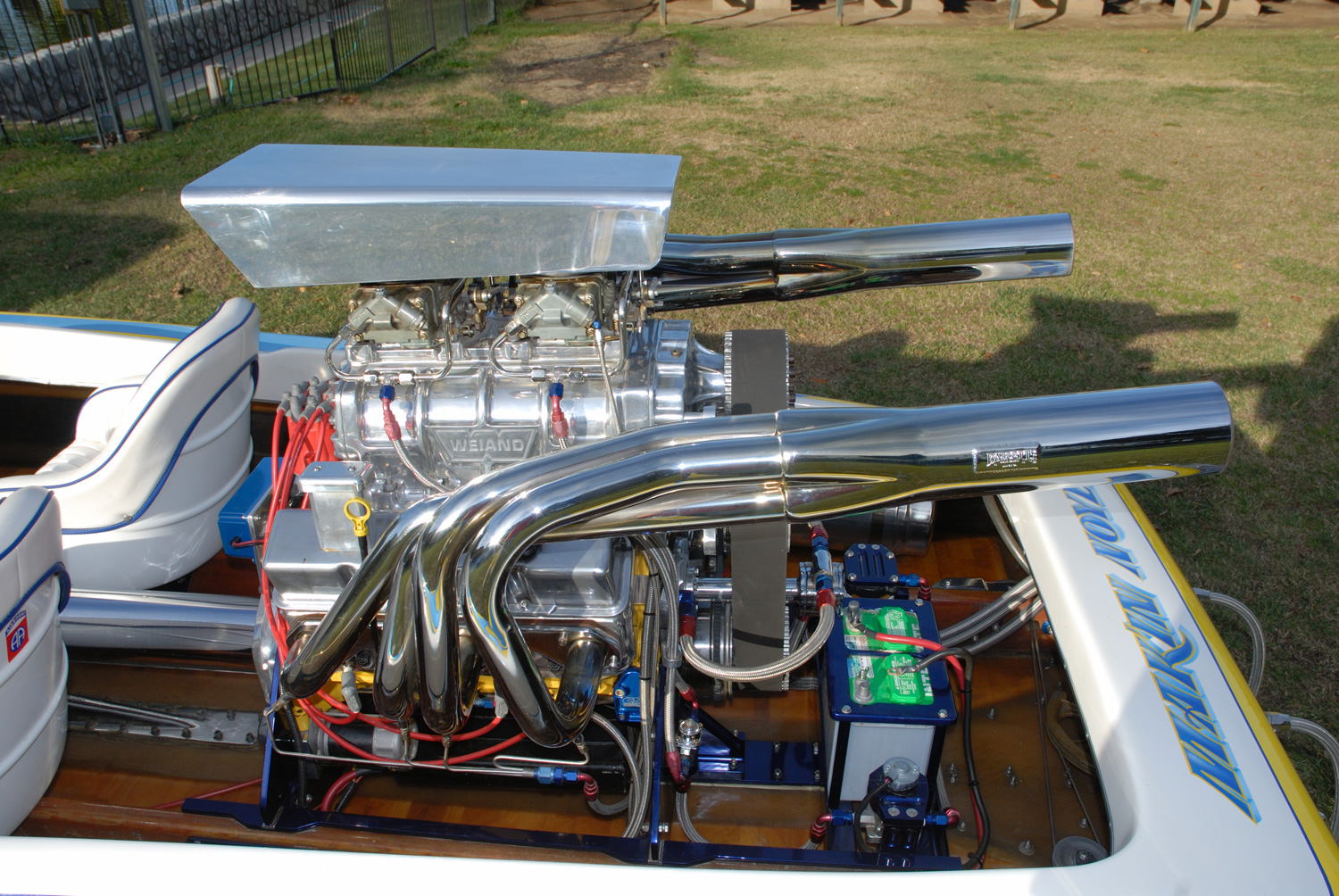 The first thing Dave did was pull the old 327 Chevy out of the boat. "I had to make my mind up whether to stay with small block power or switch to a big block. I kind of liked the idea to keeping it more original since you don't see that many restorations with small blocks. I had a friend who was willing to help me build the engine so we decided on doing a blown 383 stroker small block. 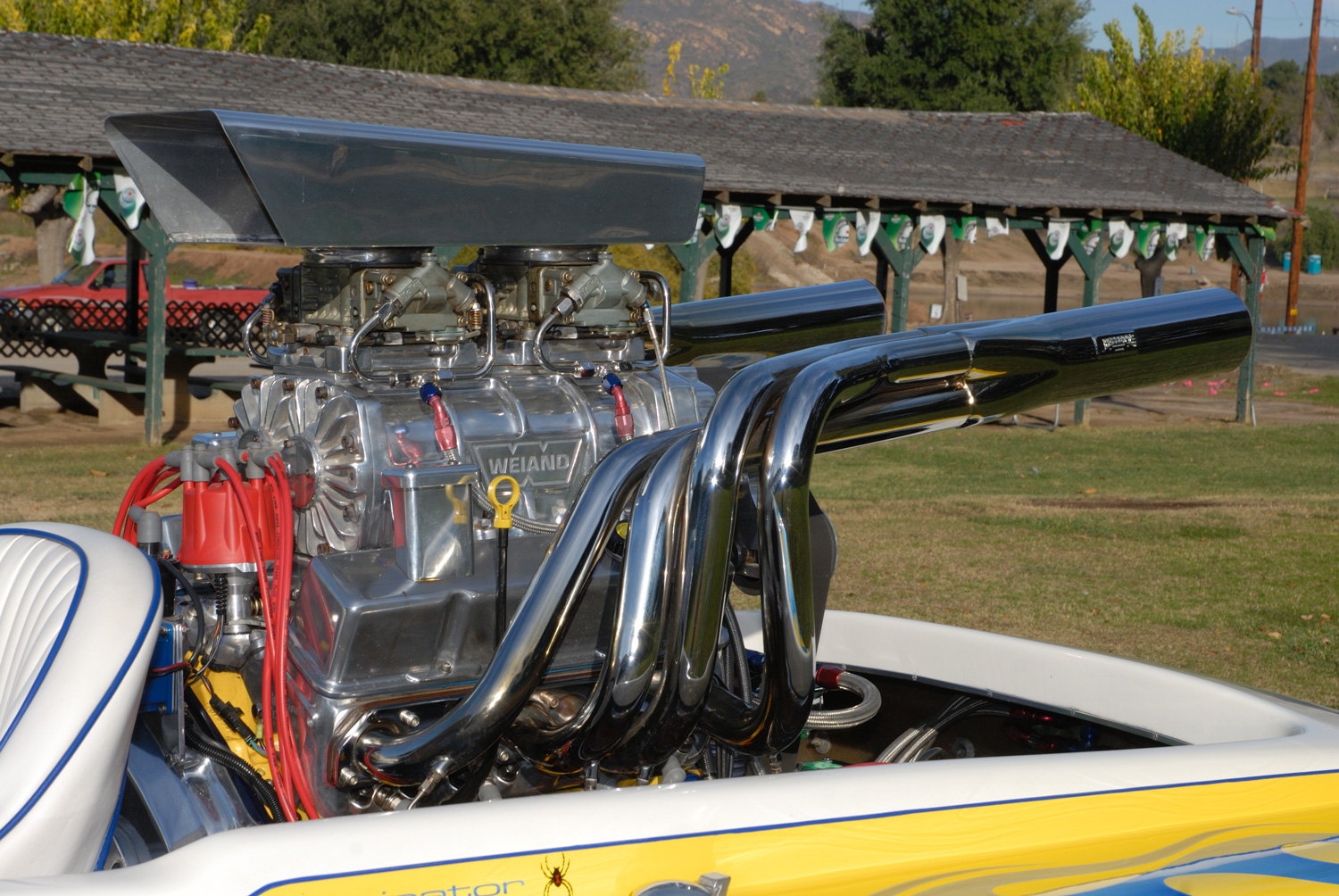 We bought a lot of good parts, Carrillo Rods, TRW Pistons, a Doug Herbert cam, Weiand Supercharger, a couple of 780 cfm Holly carbs, Edelbrock Victor heads and a new set of Bassett collector headers, and assembled it ourselves. Since we kind of wanted to know what kind of power we had, we decided to run it on a dyno before installing it. When we did, we were in for a big surprise. We started it up and it immediately leaked oil and water from practically place it could. 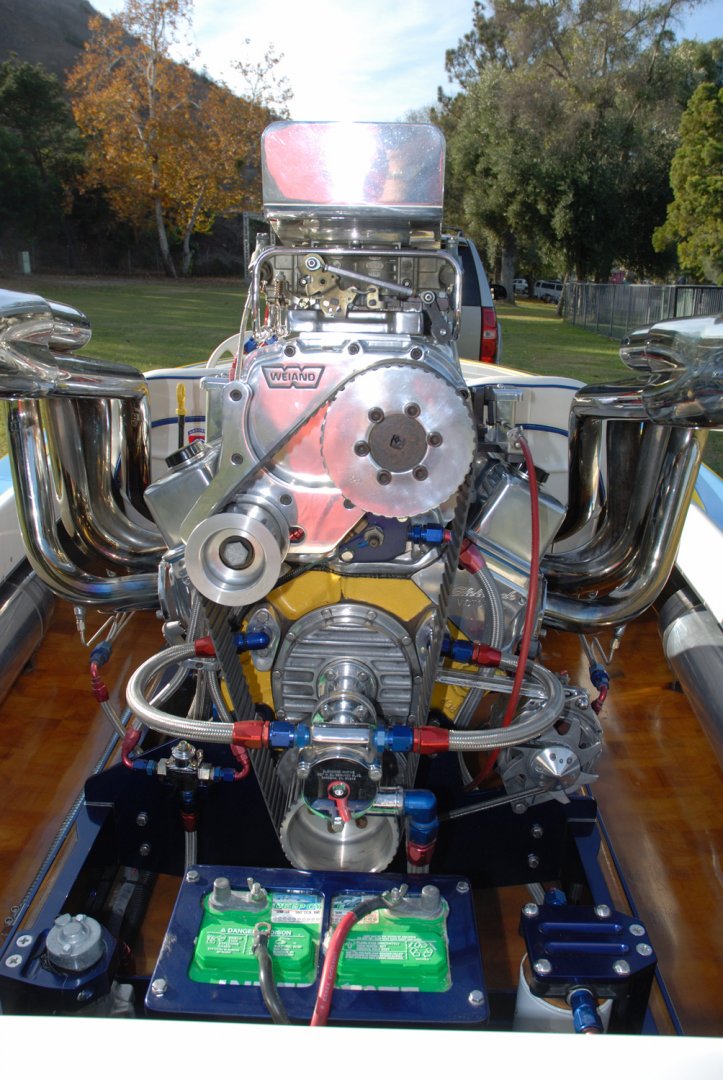 The dyno guy shut it off immediately so it wouldn't make a bigger mess in his dyno room. Fortunately it didn't hurt the motor, but we did leave it there and have it reassembled with professional mechanics in order to eliminate the leaks. A couple of weeks later it went back on the dyno and put out 710 horsepower at 5,800 rpm which we were quite happy with. And best of all, no oil or water leaks." 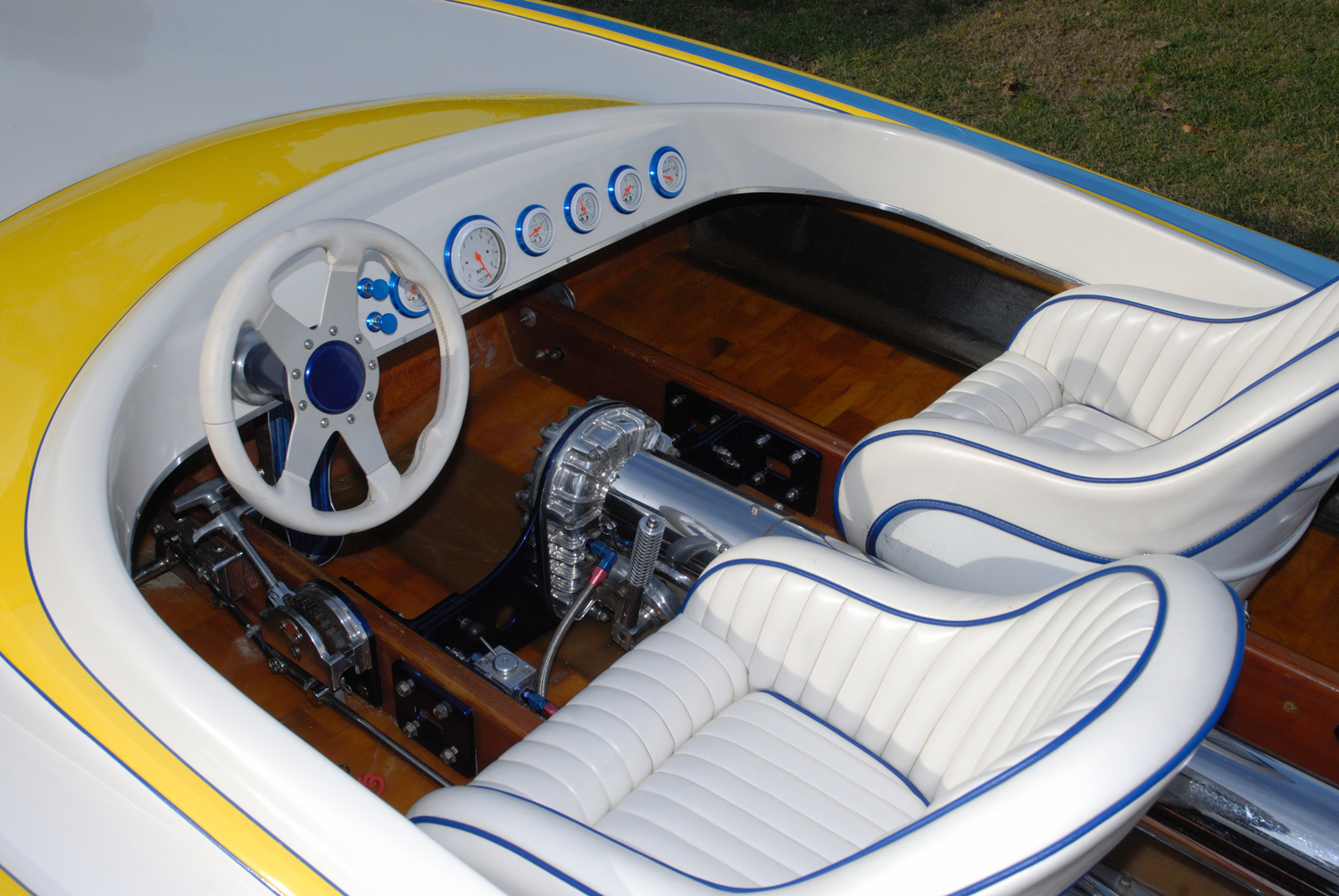 While the engine issues were being dealt with, Dave took the Eliminator Spider to his friend Jim Wilkes at Wilkes Marine in nearby Santa Ana, California, one of the top V-Drive experts on the west coast. "Jim's team did all the rigging and installation of new hardware and did a superb job," said Dave. "The boat has a conventional Casale In/Out with 25 percent over gears and we swing a two-blade 15-inch pitch Menkens prop a little better than 6,000 rpm at full throttle. The GPS says that's just a little over 100 miles an hour." 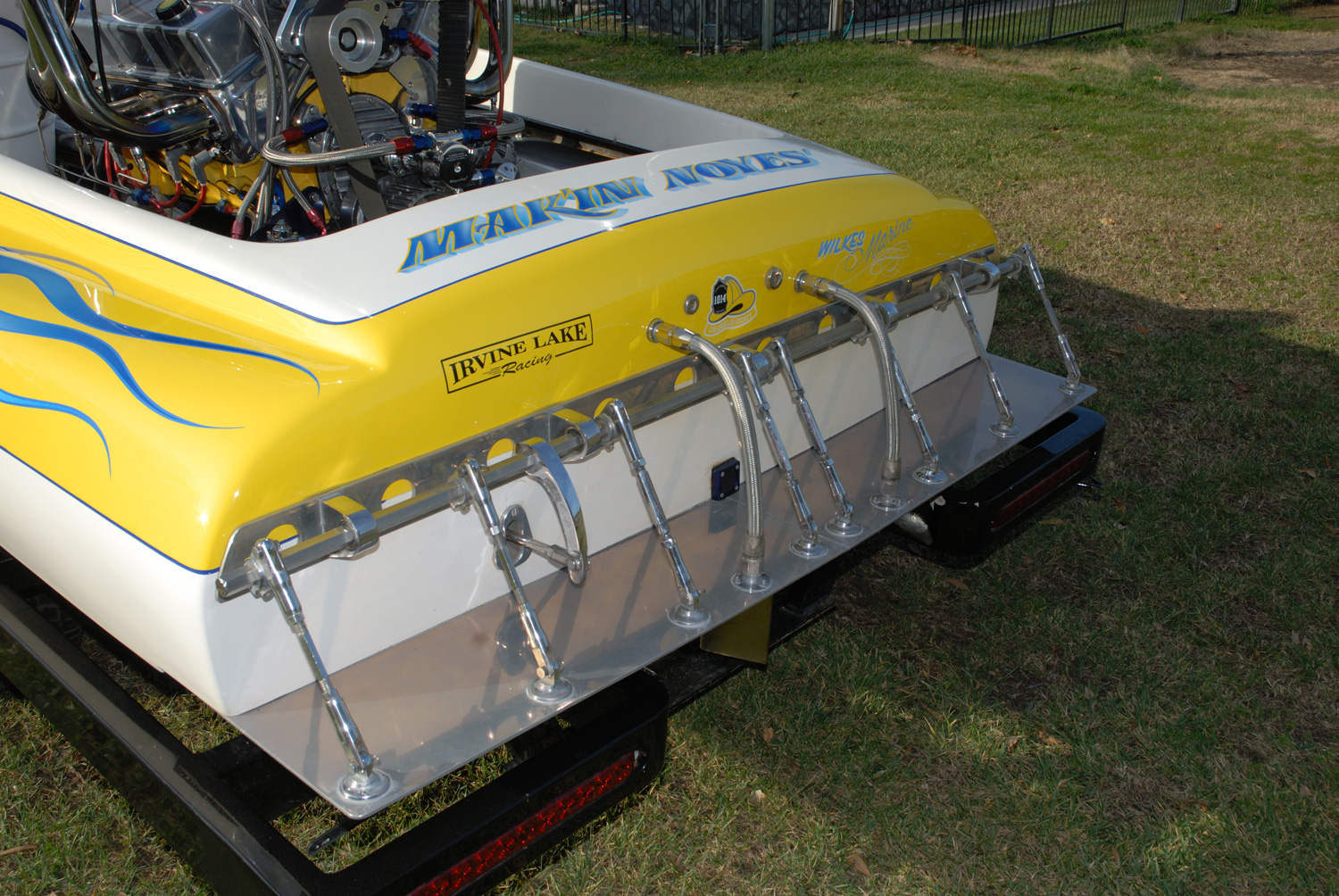 As for the hull which happens to be a 1976 build from Eliminator, the gelcoat was in remarkably good condition. Dave just buffed and polished the predominantly white hull and it came right back to life. He did, however, have Cucci change and repaint the yellow and blue accent colors which gives the boat a rather classic understated elegance. 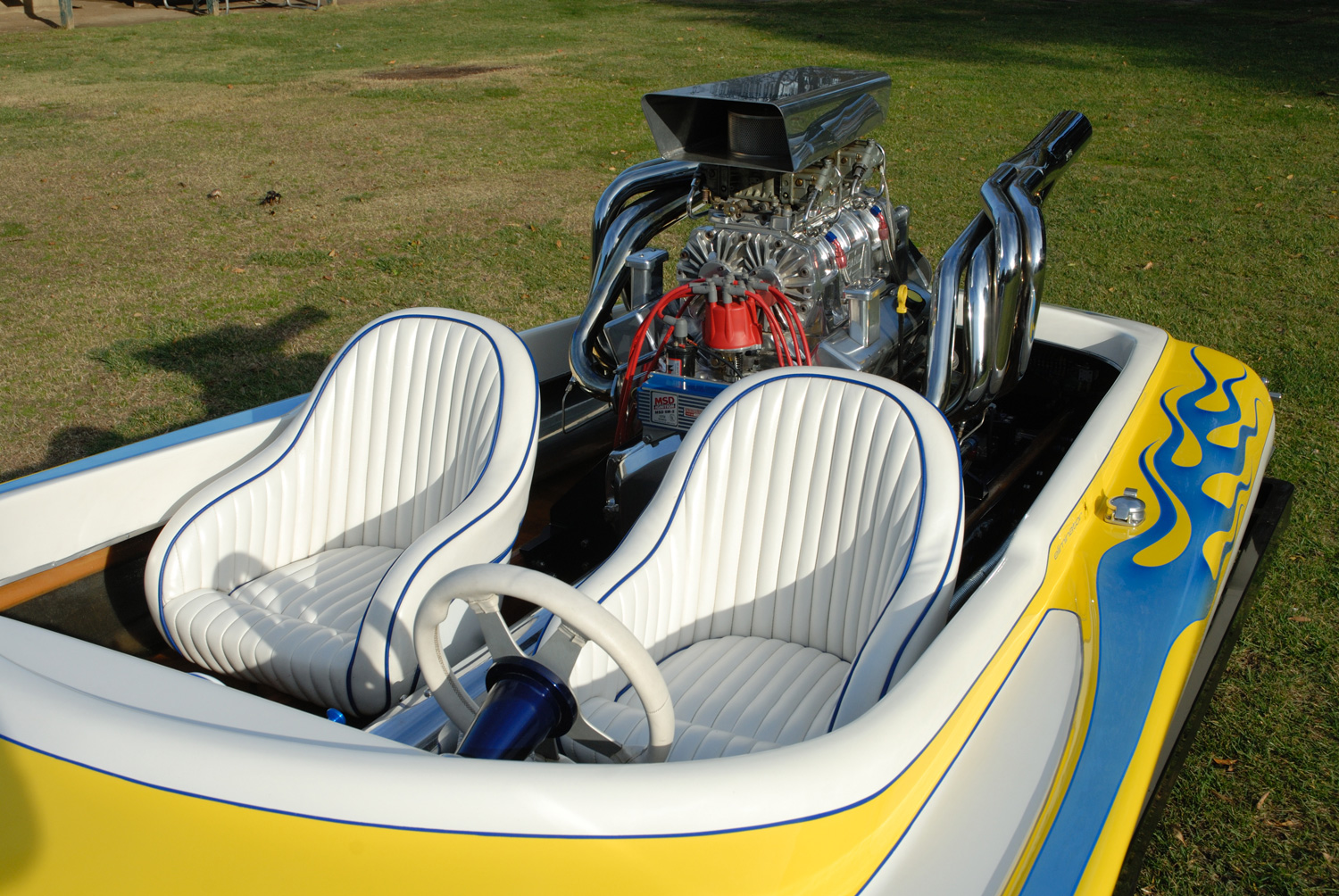 Although Dave is no longer at Irvine Lake after his retirement from the water district, his boat only peeks out of its enclosed trailer storage on very special occasions. Most of the time, "Makin' Noyes" is doing just that on the Colorado River, somewhere between Needles to Blythe. Some guys have all the luck.
Reactions: One2go, Dkahnjob and Gripside80