Miami Boat Show Returns to “SO BE” with Electrifying 2022 Debuts

Welcome Back Home! Gone for good was the commute from hell to Virginia Key, thanks to the return of the 2022 Miami International Boat Show (MIBS) to its former stomping grounds at the Miami Beach Convention Center. Completely revamped, it does entail a bizarre new twist… the front is now the back, and the back is the front.

Regardless of the mastermind behind the in-and-out architecture, the “return to SO BE” revelation still called for a celebration, and perhaps a chilled libation to deal with the drama of sea trials circling back to Sea Isle Marina – the downtown location linked to notorious long ides through Government Cut’s sloppy-sea mash-up and onslaught of boats bolting out to the open Atlantic.

Dubbed the “largest boat and yacht show in the world,” this year was the first edition to be integrated with the Discover Boating North American lifestyle brand aimed at attracting the next generation and engaging current boaters. The joint production by Informa Markets, the National Marine Manufacturers Association (NMMA), and the International Yacht Brokers Association (IYBA) combined the Miami International Boat Show, Miami Yacht Show and Superyacht Miami to create one seamless experience for all. And it worked! 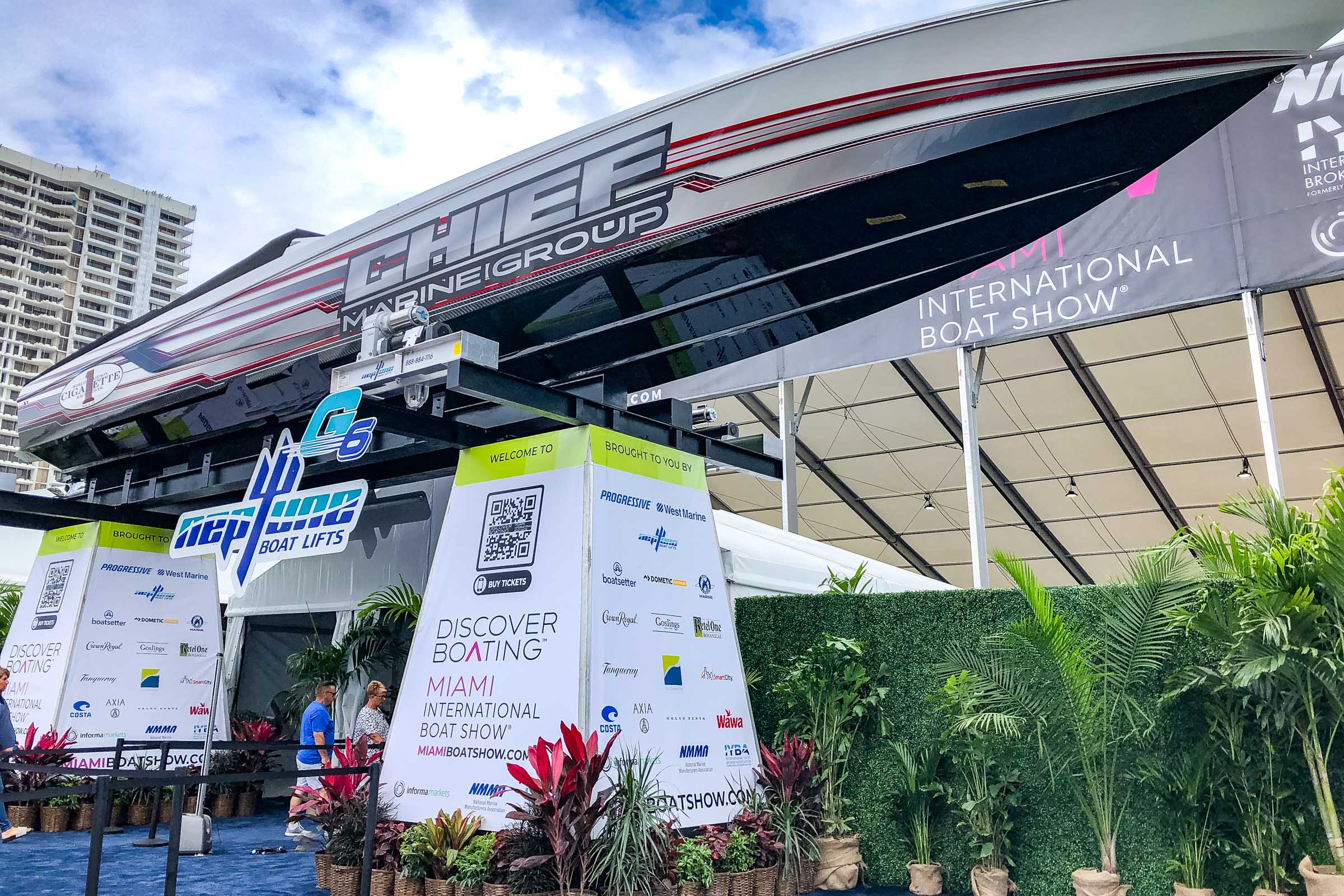 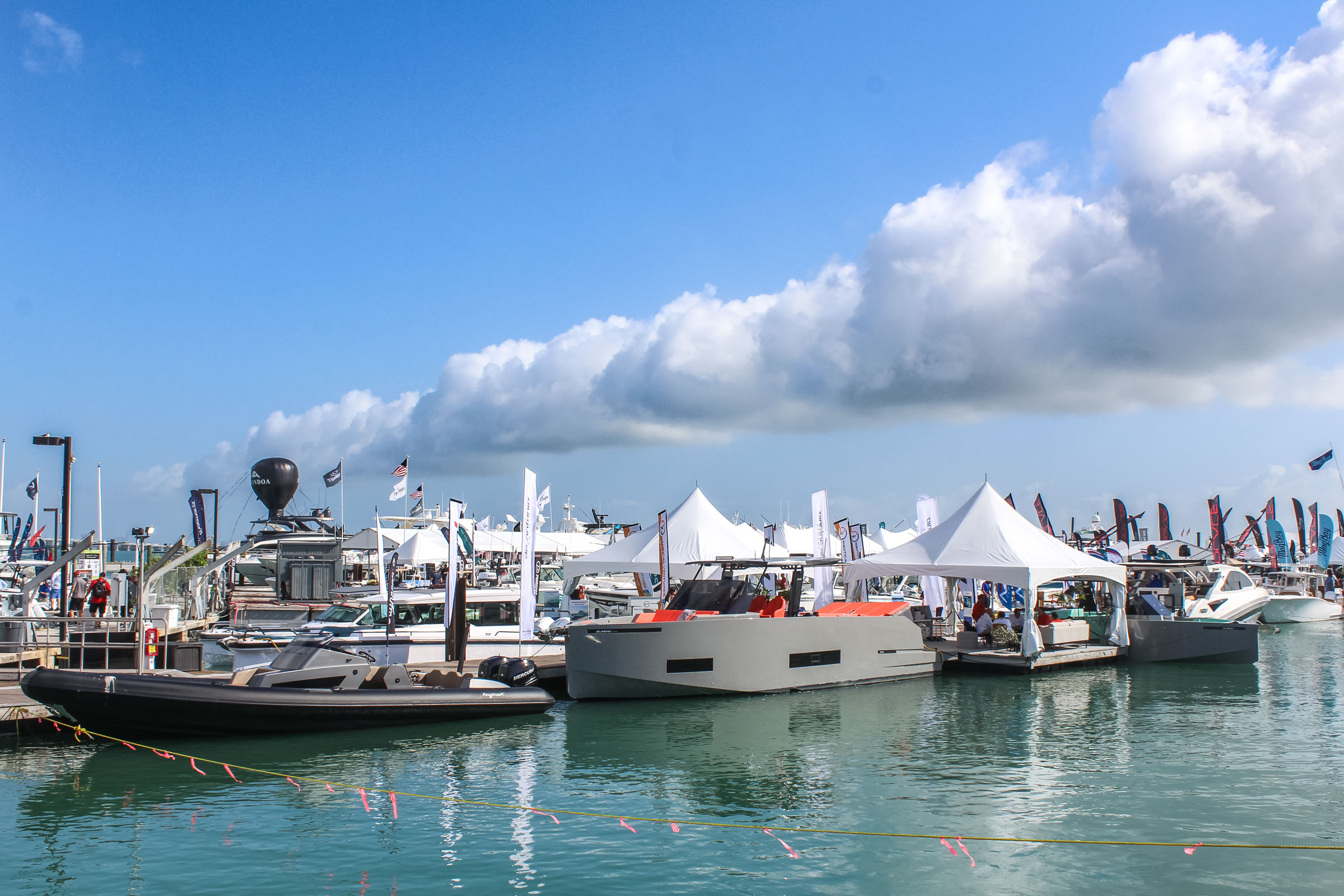 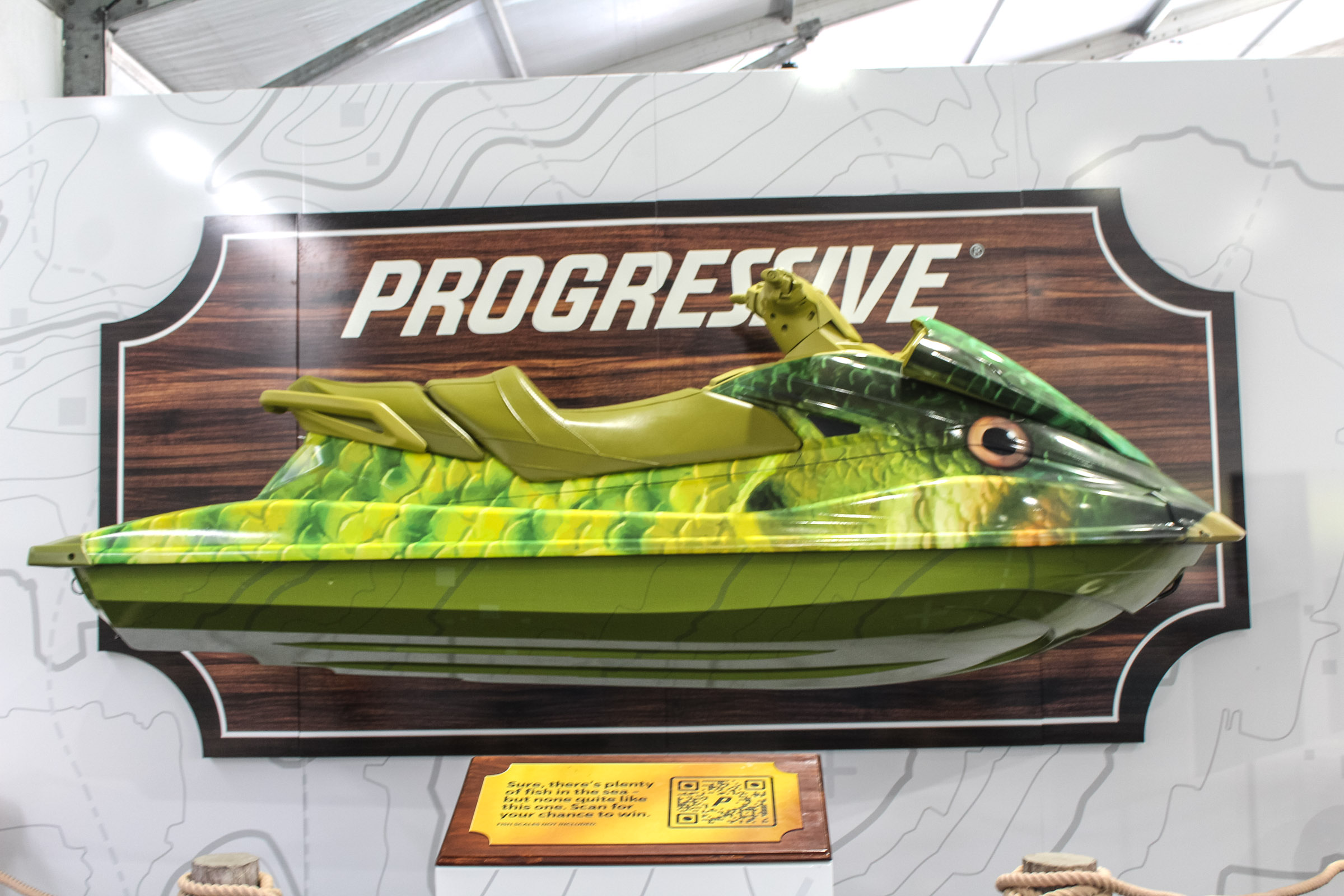 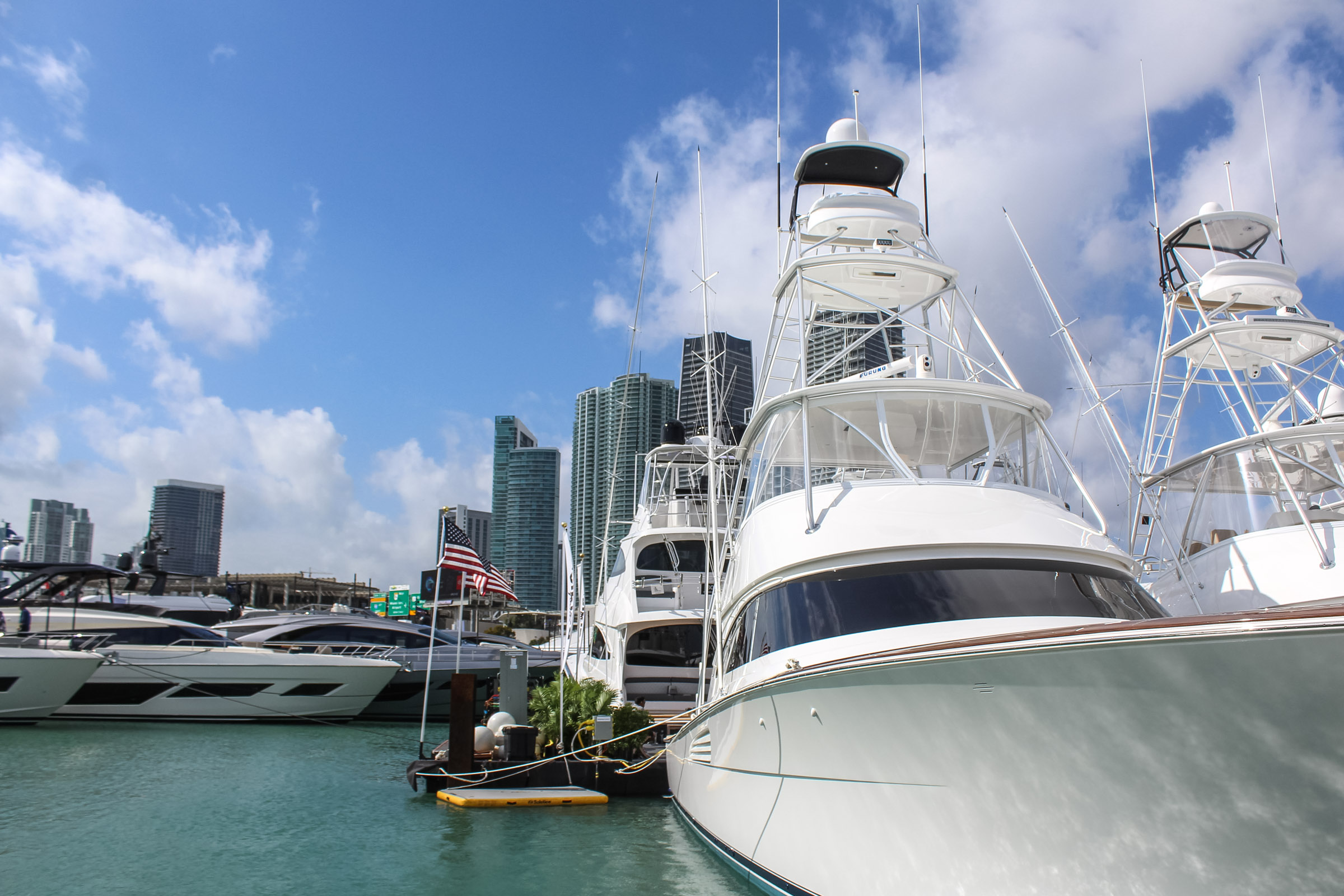 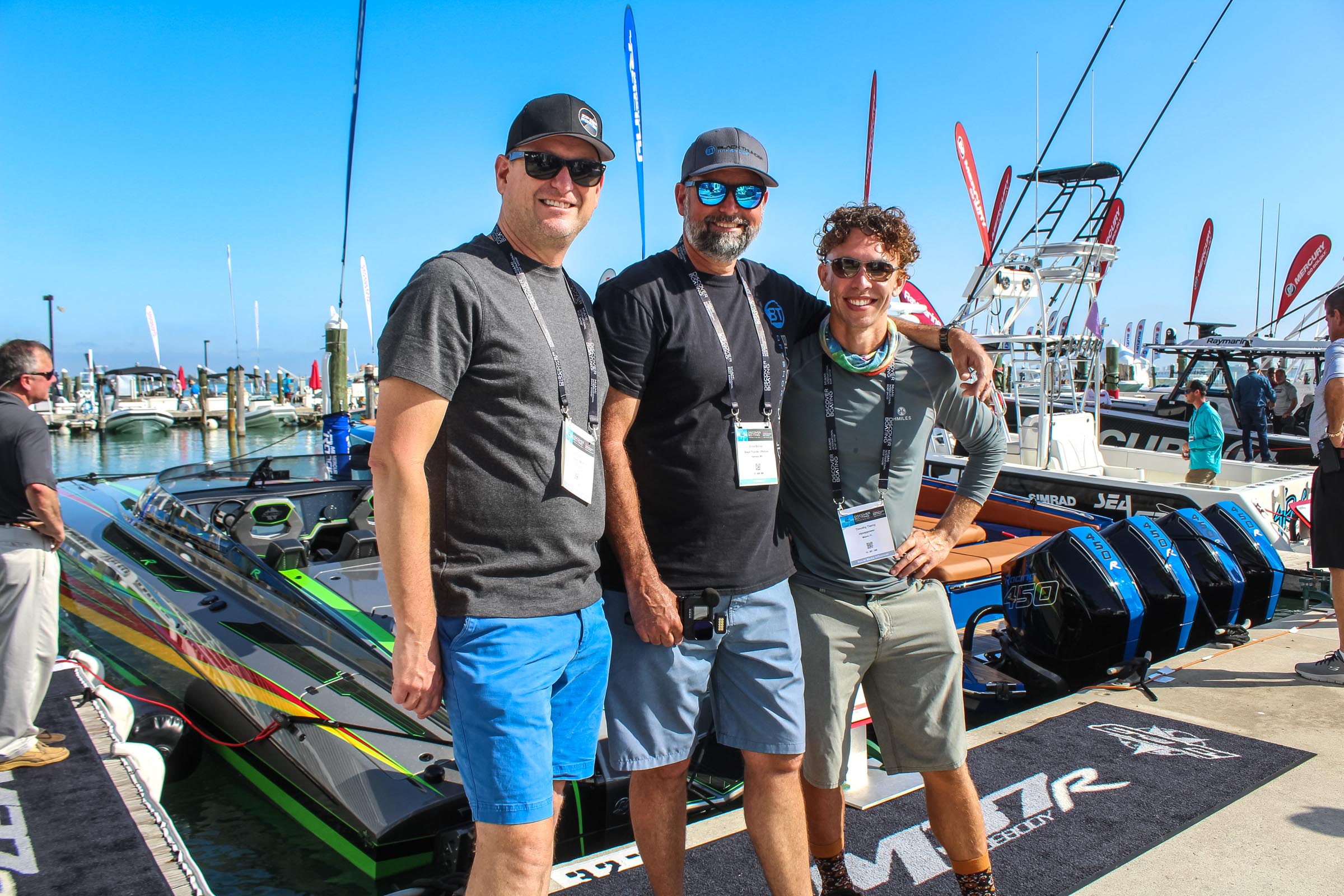 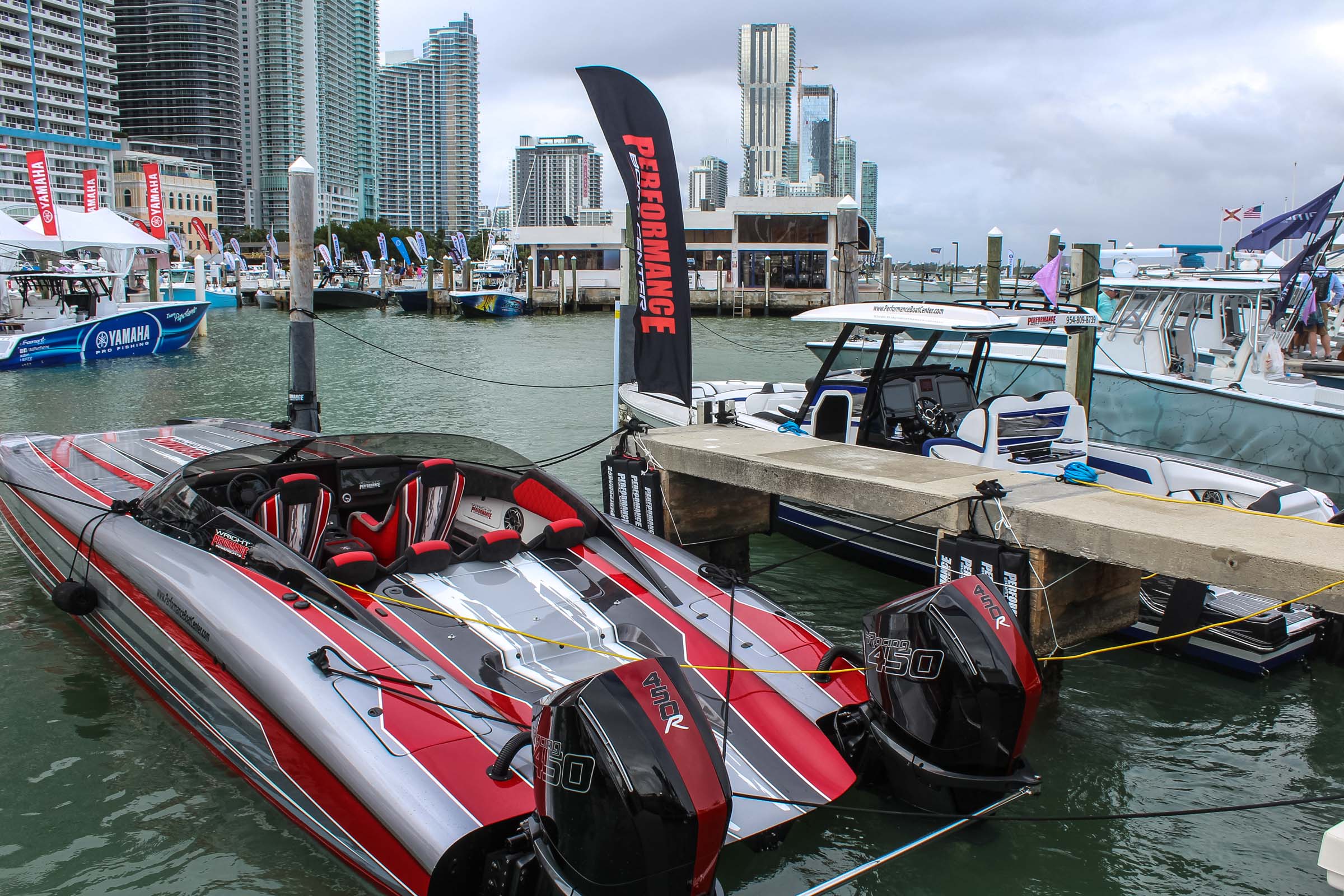 What’s more, two weeks prior to show kickoff, a programming collaboration with FOX Sports and Los Angeles entertainment company Short Shoot was announced regarding a partnership to create and produce a one-hour special on FOX Sports showcasing all the action. Film crews certainly had plenty of footage to capture from the electrifying 2022 model nautical treats on display fulfilling show-goers high-performance cravings. The RDP team (yeah that’s me) also kept busy gathering content for a trio of extra sweet special features on Black Thunder, Cigarette Racing Team and DCB Performance Boats.


Sport Cat and Center Console Commotion​
As per usual, outboard-powered sport cats and center consoles continued causing a commotion, especially at the MTI camp and in my heart. Who knows, maybe girls are just chick magnets instinctively attracted to Tiffany blue anything, but the one-of-a-kind standout with its pastel-painted cowlings and glowing cockpit of LEDs was Joe Sabo’s MTI 390X.

Inspired to match his Breitling Caribbean Edition timepiece (of which only 200 were fabricated from the famed Swiss watch-maker), once set free from dialing in at Shaun Torrente Racing, the distinct color-schemed speedster is guaranteed to be lightening up docks and deep blue waters at summer fun runs around the nation.

The powder blue visionary did however, have its fair share of friendly sibling competition from Lil’ Game Changer. The red and black MTI 390X is owned by David Landsman, co-host of Baltimore’s Rockin’ the Harbor Poker Run and former owner of the Outerlimits Gold Digger. The Lil’ moniker coincides with Landsman’s convoy of big “Game Changer” Midnight Express luxury center consoles, which includes a new 43 Solstice on the way.

But steps away from the MTI booth, another sultry Solstice solicited its own oohs and aahs. Dripping in carbon fiber and redness all around, from the helm to the smoking hot cabin and galley, the 100th edition gave off the aura of a fashionable, high society Parisian haunt on the Champs-Elysées. Of course, the red pattern traveled to the transom with a matching set of quint Mercury Racing 450R covered cowlings.

The Solstice wasn’t the only stunner. Slotted between its 43 series and the 60 Pied-A-Mer, Midnight Express also saw the birth of the 52 Vitesse at the MIBS. The marine monster with a 13-foot 8-inch beam, hydraulically actuated swim platform and half a dozen Merc 450Rs, grabbed everyone’s attention, not indoor, but rather in the water at the Miami Yacht Show opposite Sea Isle Marina where Midnight Express had its second display.

The matte gray six-pack on the 52 Vitesse served as another example of the exploding fastboat fashion trend intensifying practically every custom-designed outboard on the market. Cowling choices appear to come in more shades than nail polishes at an Asian beauty salon. An instant hit, of the current 50 Midnight Express center consoles on order (probably higher at the time of writing) eight are for the 52-footer Vitesse. 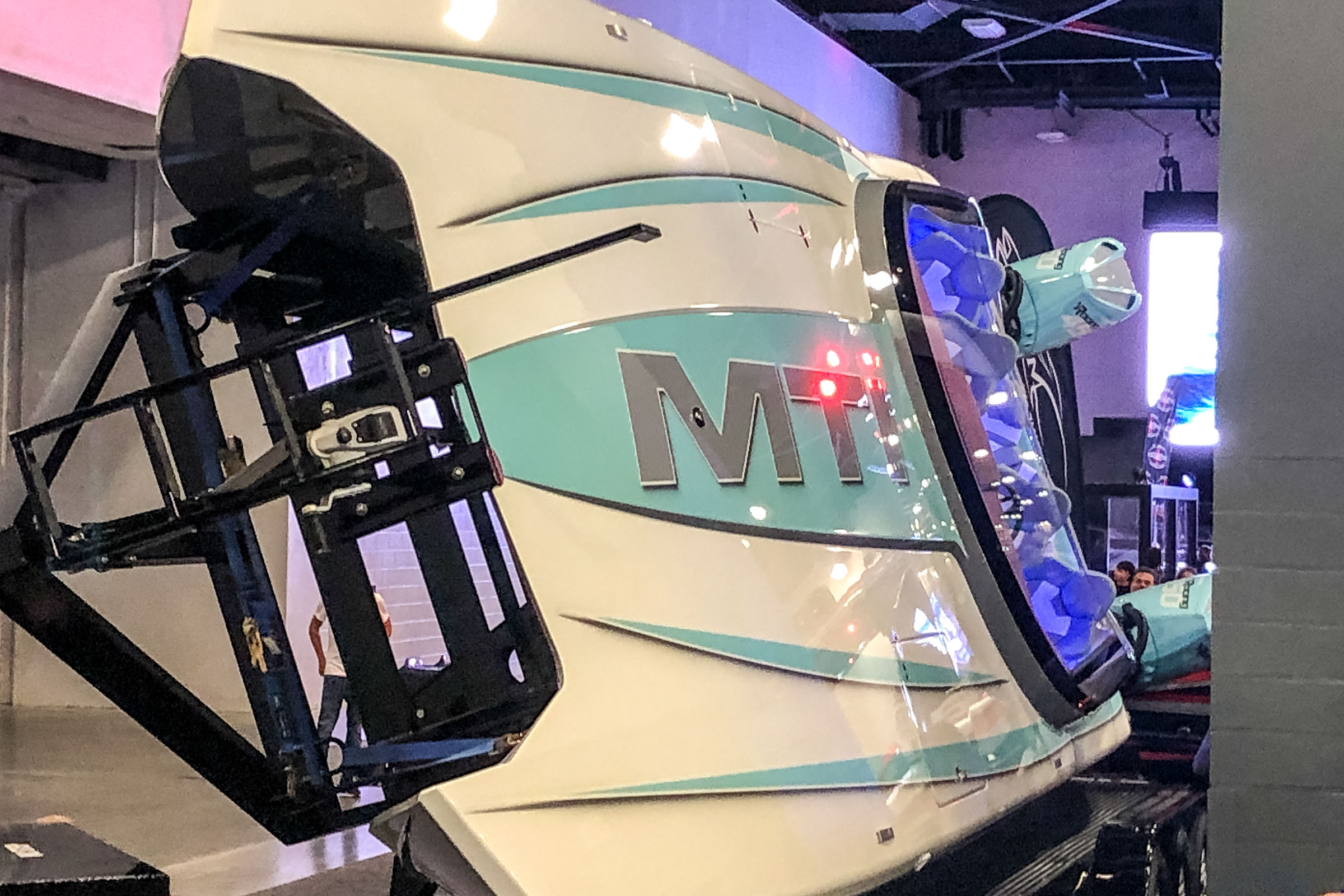 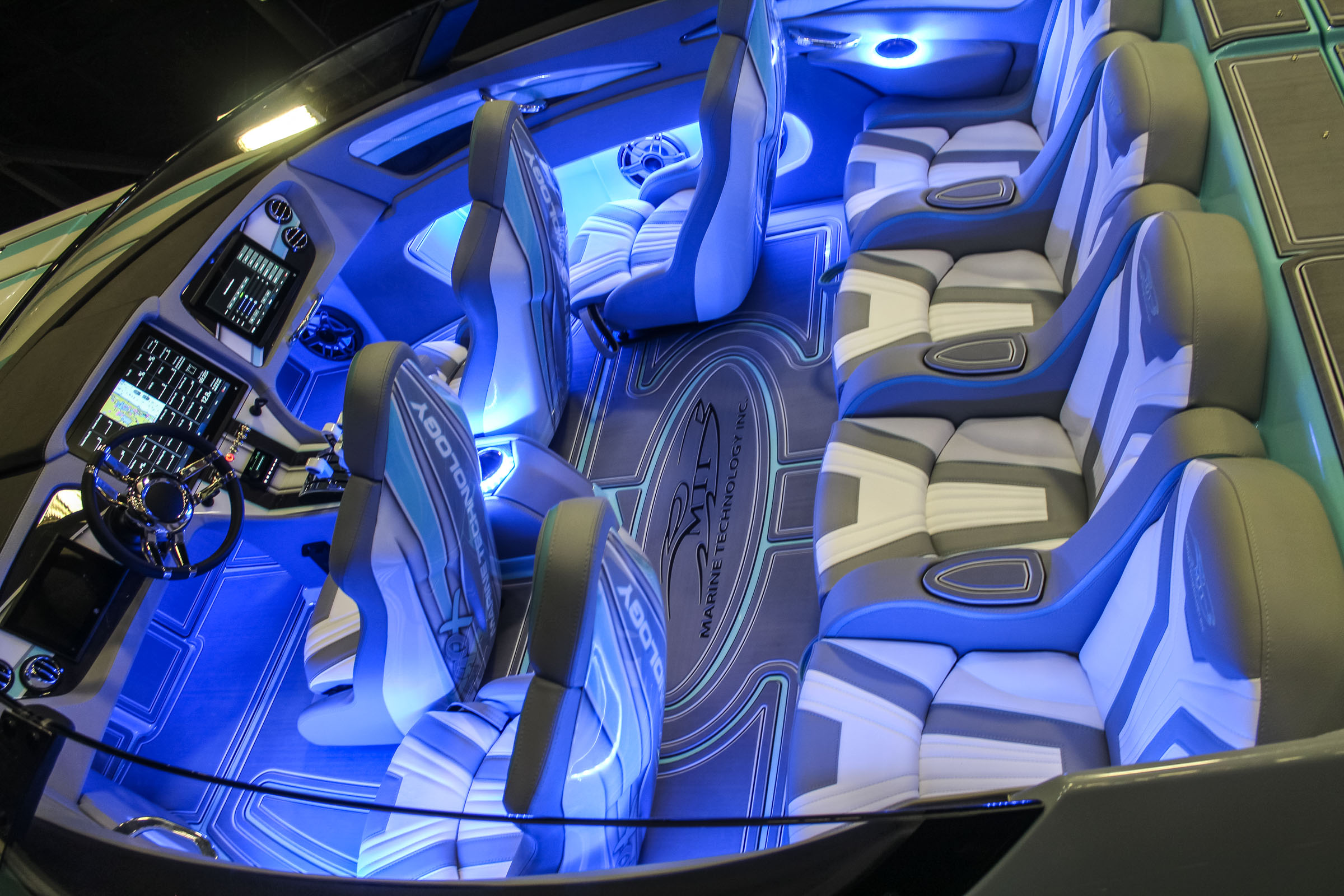 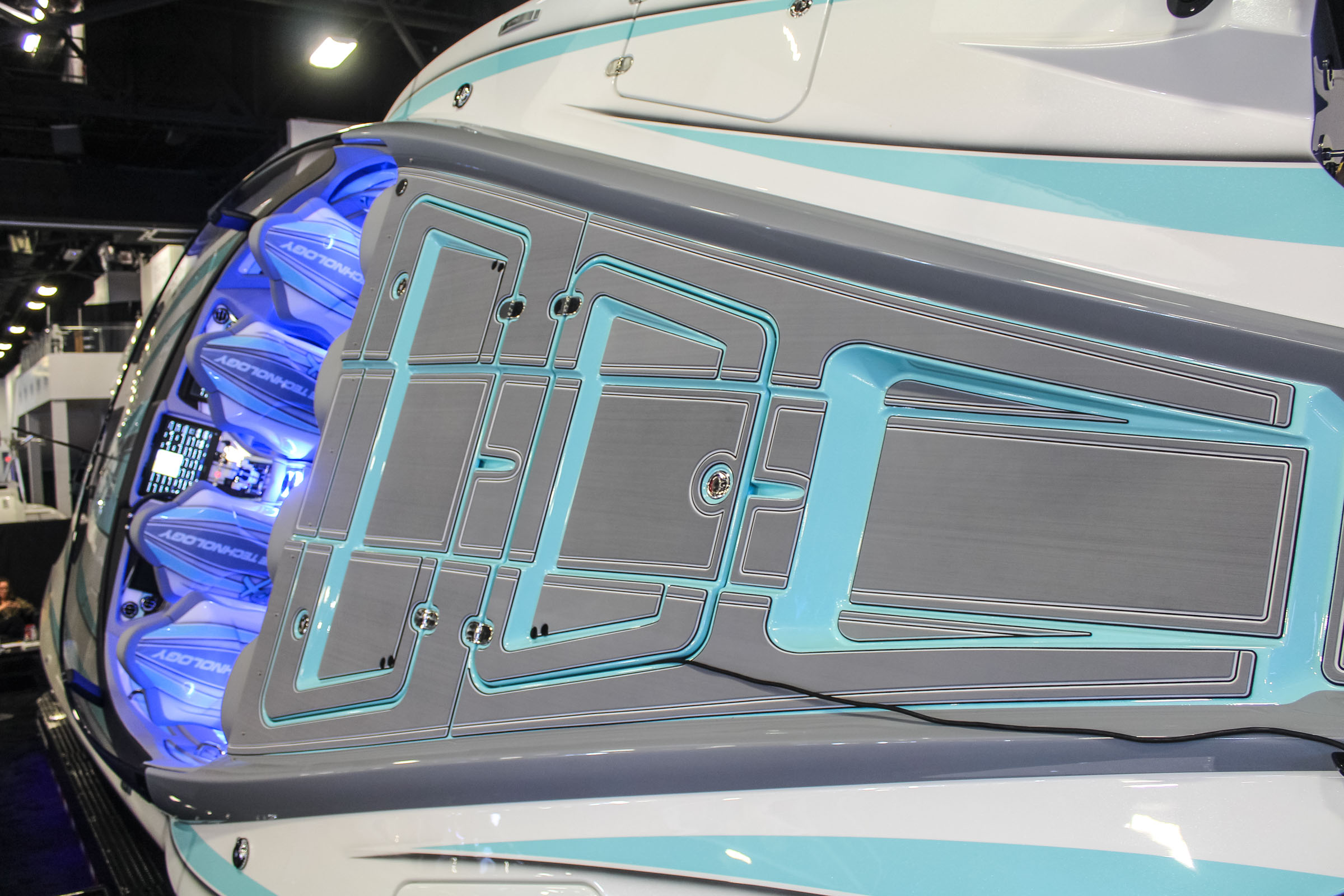 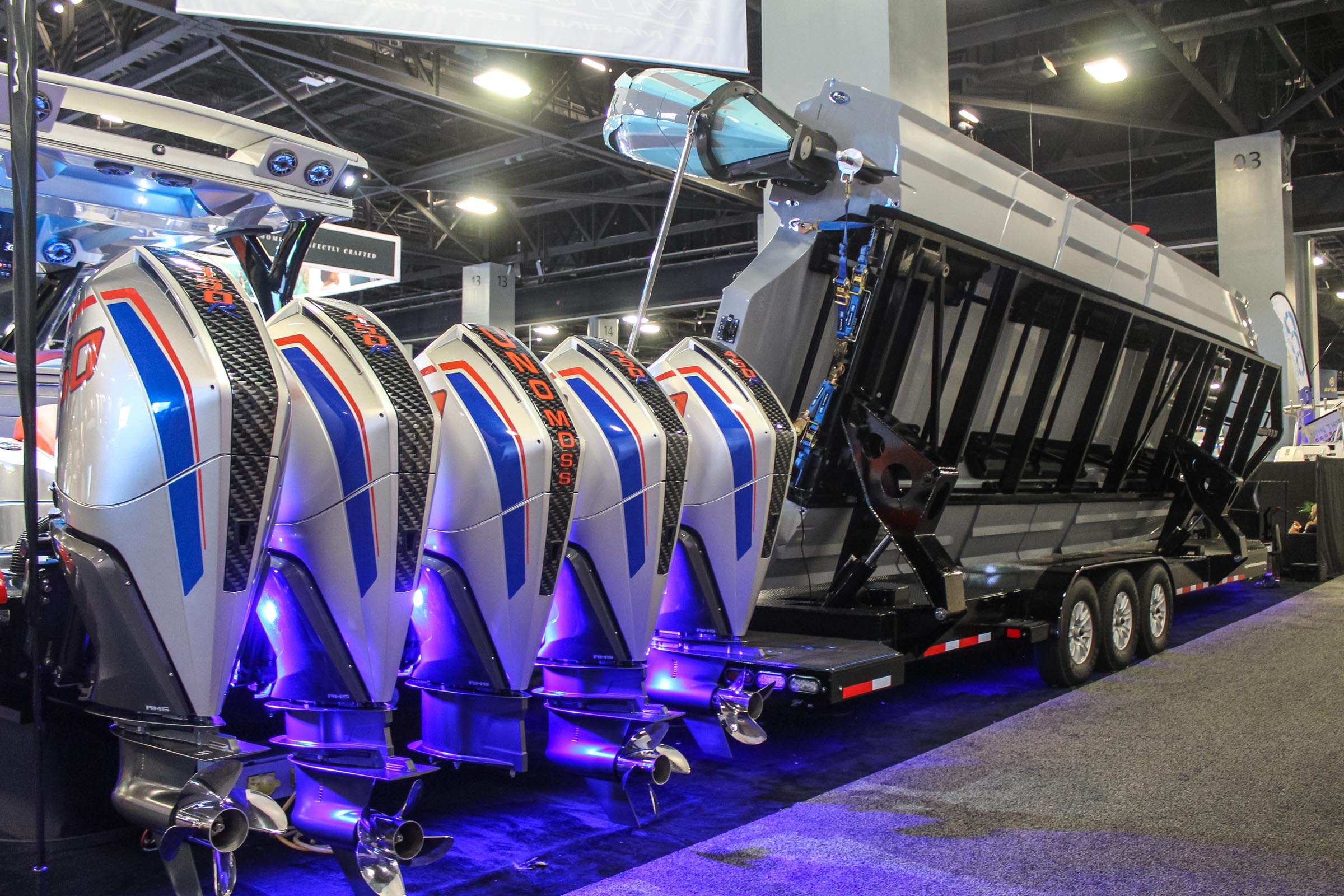 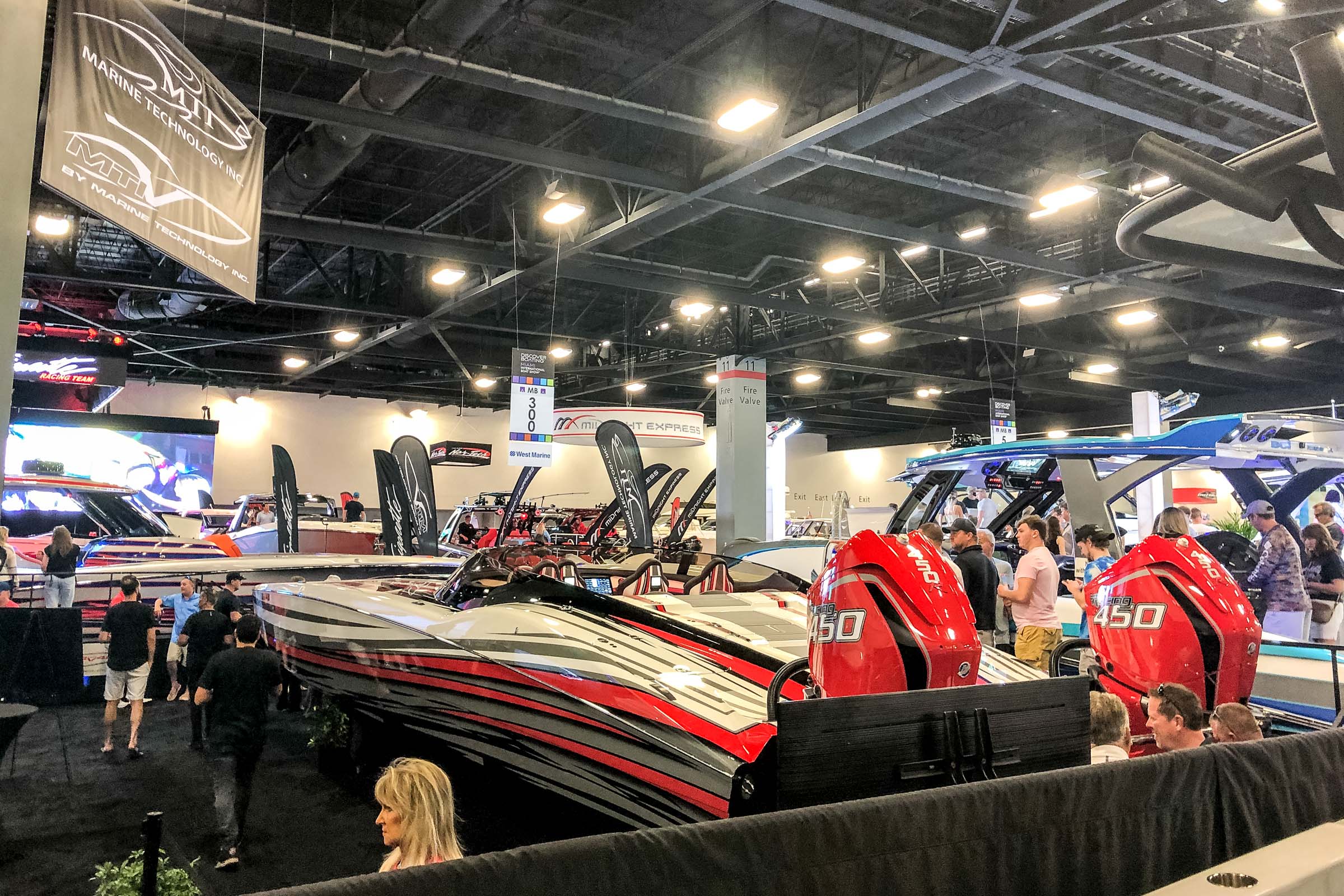 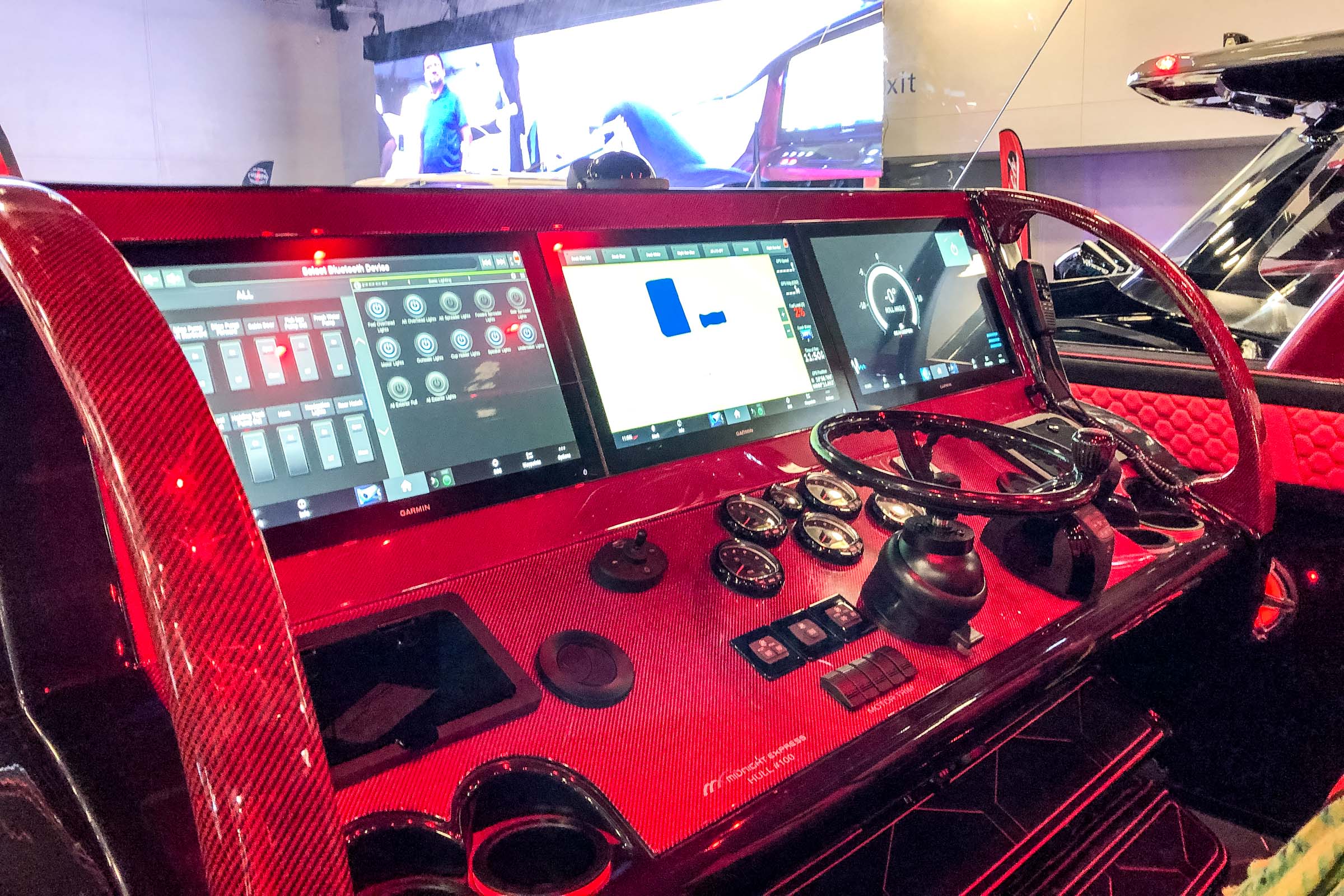 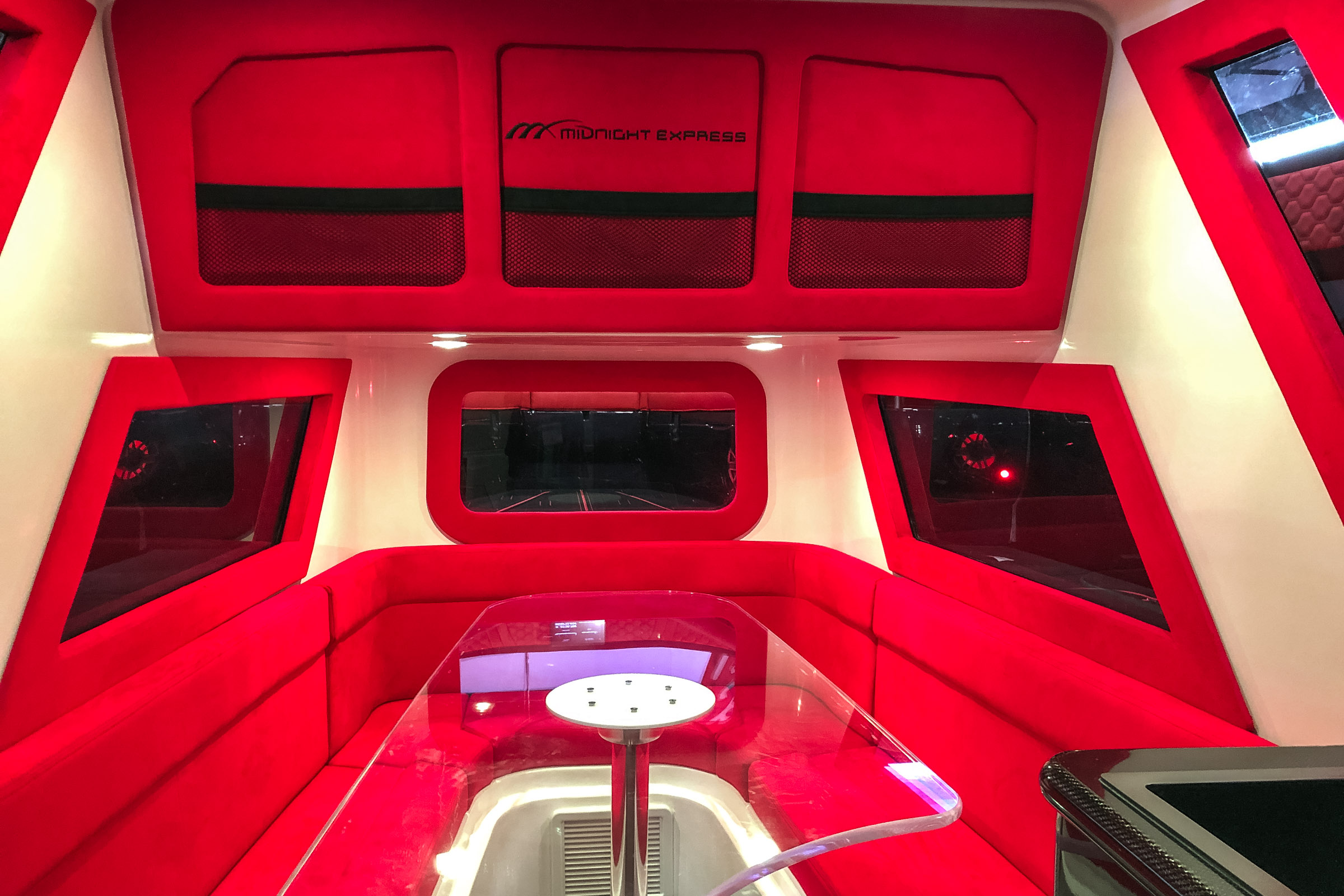 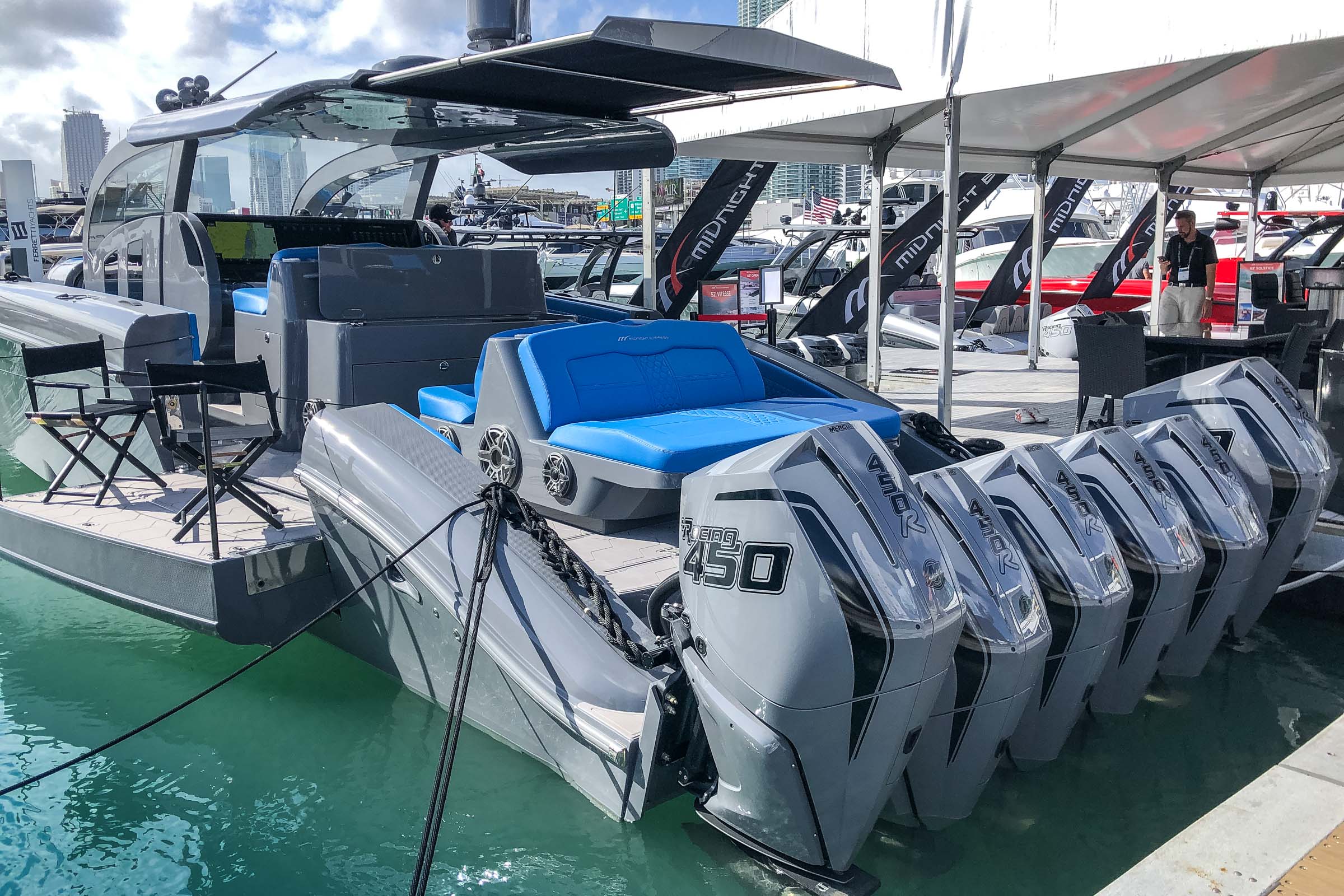 50 Nor-Techs and Some Nifty Electronics
​
Tying Midnight Express in transactions was Nor-Tech Powerboats. The Cape Coral-based company’s sales figures exceed extraordinary – all 50 orders (if not more by now) were for the 400 Super Sport center console launched during an opening night premiere party. And of that total, 14 will head northbound across the border to Double R Performance in Canada.

Talking with Henrik Margård about the new 400 SS, the COO says, “It’s the next step for many 390 Sport owners and really like a mini 450 Sport. We basically took the 39’ hull, raised the deck so the new bow table comes down flush to the floor; added the enclosed head and wind deflecting doors; and used a fiber glass application to conceal all piping normally exposed on the outside.”

“Cockpit upgrades include a helm station constructed from real glass, two large Garmin screens, and an expansive hardtop with skylights. Seats are six inches wider than the 390 Sport model and we added four more JL Marine Audio speakers.” Inquiring about top end speed out of the box, Margård said, “This boat has yet to see the water, but we anticipate it running mid 90s. The 39’ with the same setup hit 102 mph.”

Bidding farewell to Nor-Tech, my next stop was booth #1098 for the enticing trio of Outerlimits. The supersized green SL 52 V-bottom beast boasting double 1350s Mercs under the hatch lured me in, but SV 29 and SC 37 insured I stayed. Longtime Canadian powerboater Bob Barnhart, famed for his former Nor-Tech 50 Predator and existing Mystic 4200 Predator 2.0, is the proud new owner of the inboard 565 engine-powered sportboat, which busted out a 97.7 mph GPS-tracked top hop on Narragansett Bay in Rhode Island during post-show testing

Looking past Outerlimits to the outside limits of the show, Class 1 offshore hardware could also be seen on the Miami scene – in the form of a 47’ Victory. The Huski Racing cat, snatched from the previous Miss GEICO race team, not only treated visitors to tilt-trailer views but Huski Chocolate branded beverages and protein drinks flowed freely for all to enjoy. While, under the tent, throttleman Sir Steve Curtis took some time out from giving the boat a beating and signed on to do the fan greetings.

Successfully connecting older arrangements from the analog era to the innovative digital realm, Price pointed out, “Previously you had to wire everything separately with the breaker switches, now it’s all integrated and programmable. Different application settings allow for varying mode characteristics to be used. For example, the Bluewater Enterprises LED lit electronic push button switch system gives you the option to label everything, and offers easily swappable buttons to change functions.”

Joining Hardin with its new hp coupler was Marine Design Corporation (MDC). Proprietor Mike Clesceri explained, “Rated for 1,200 horsepower or above, it fills the gap between the drive guardian and the stock OEM rubber coupler. It’s also 100 percent rebuildable, so when the splines wear out, instead of throwing them away, they can be replaced for significantly less than the cost of an OEM replacement.”

“When the rubber one fails, which is common with higher horsepower boats, you’re usually getting towed home. With ours, it’s predictive, you can pull the drive off and to see when the indicator dot and line are not aligned; this tells you, it’s time to replace the dampener material.” 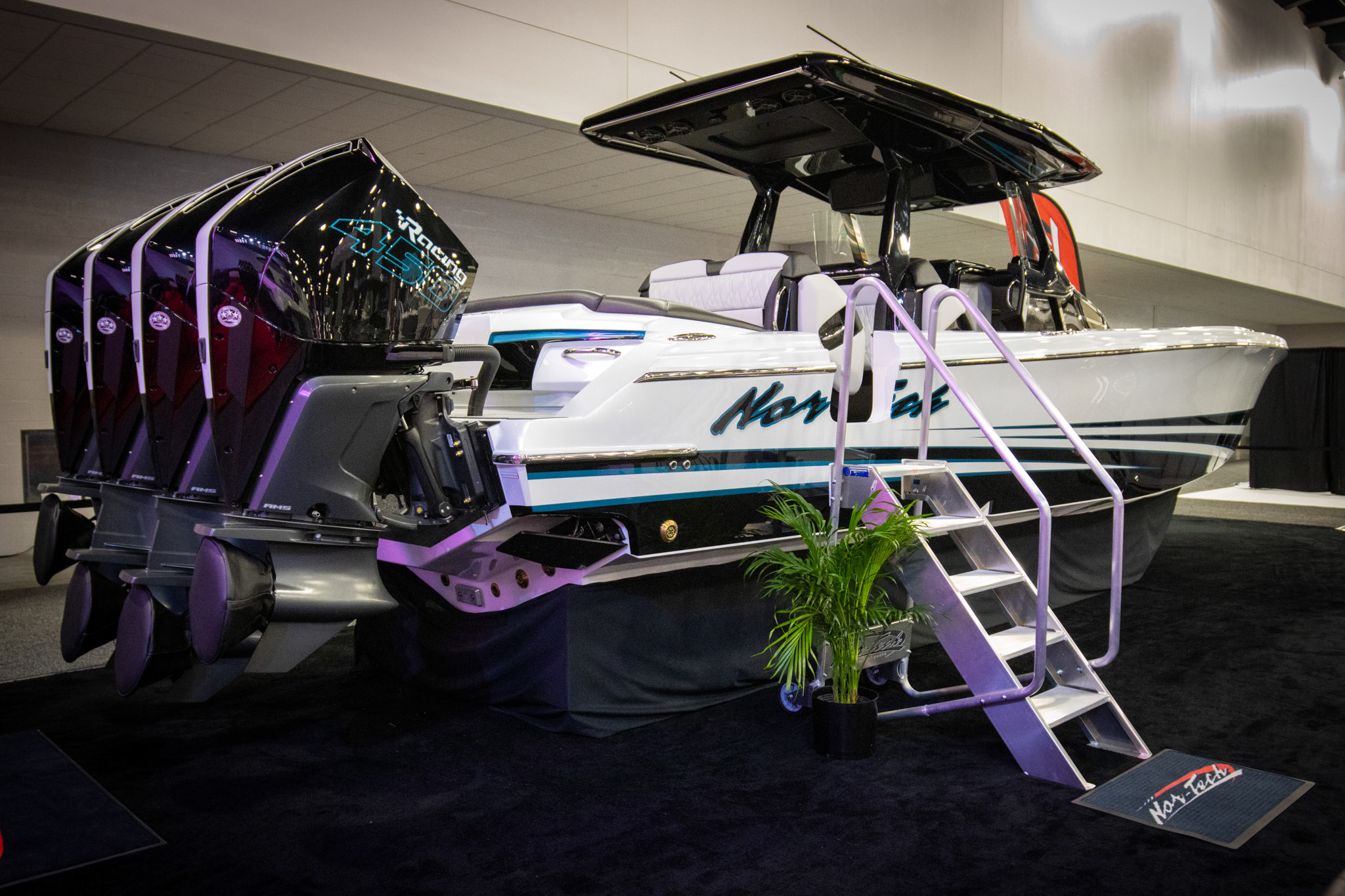 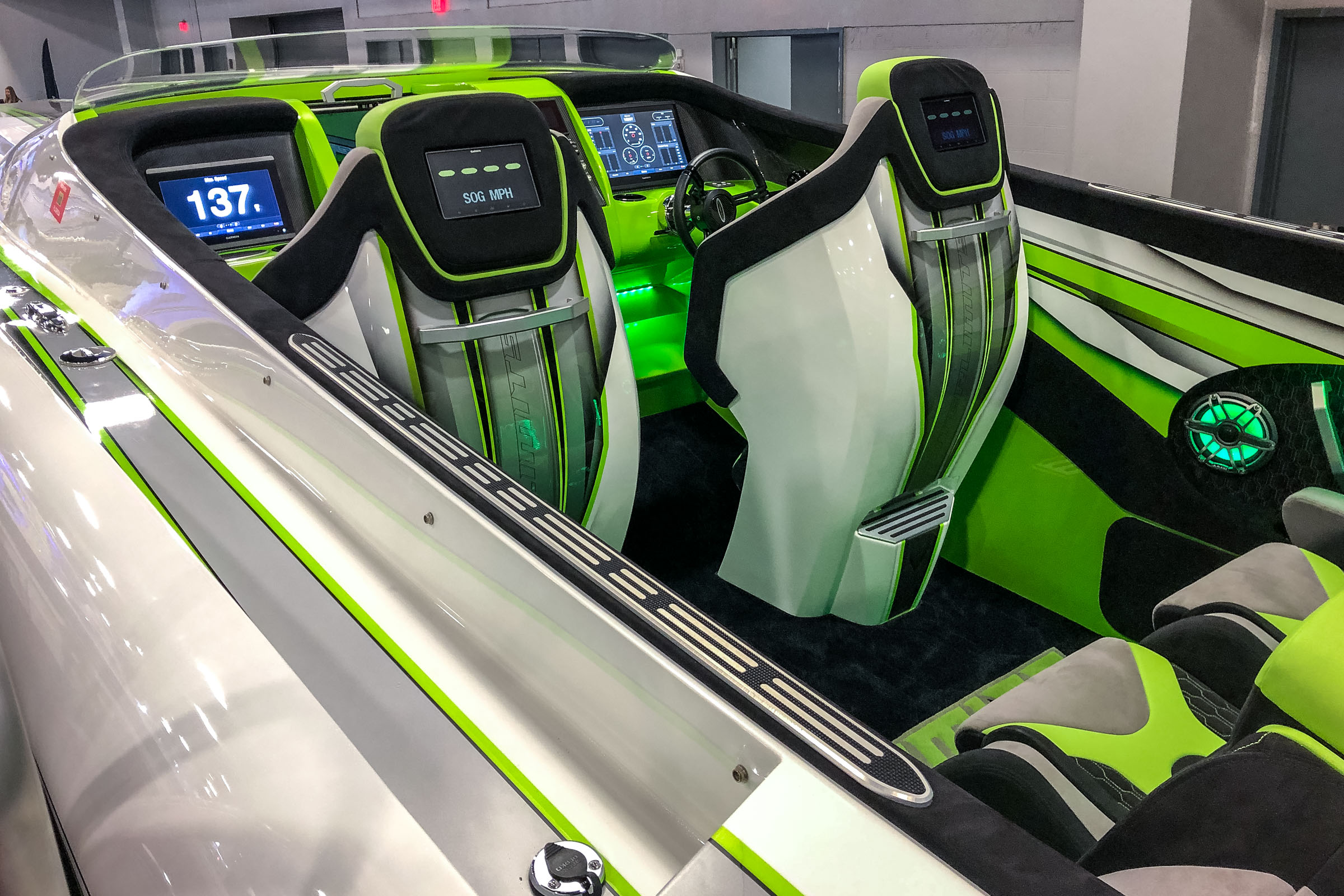 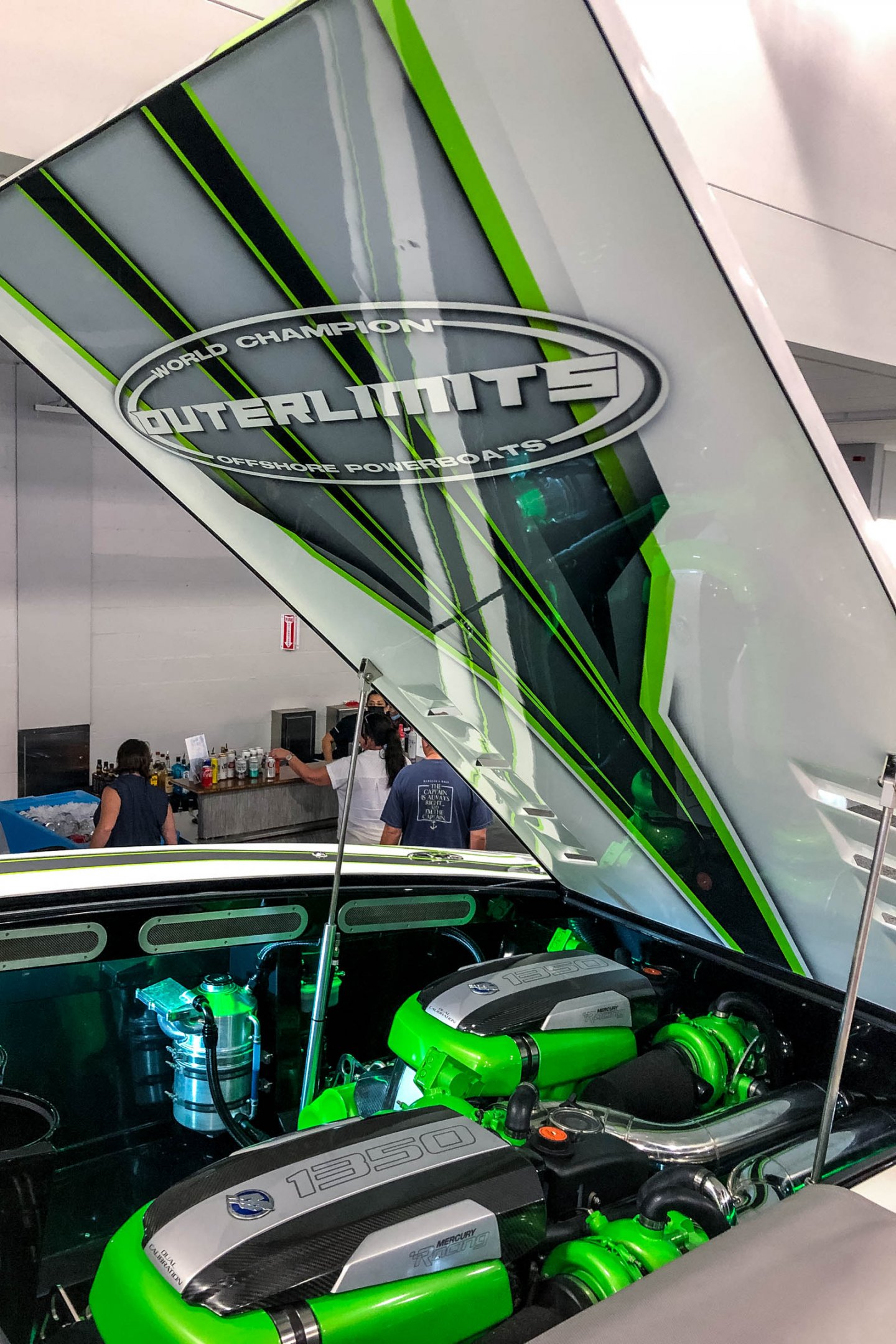 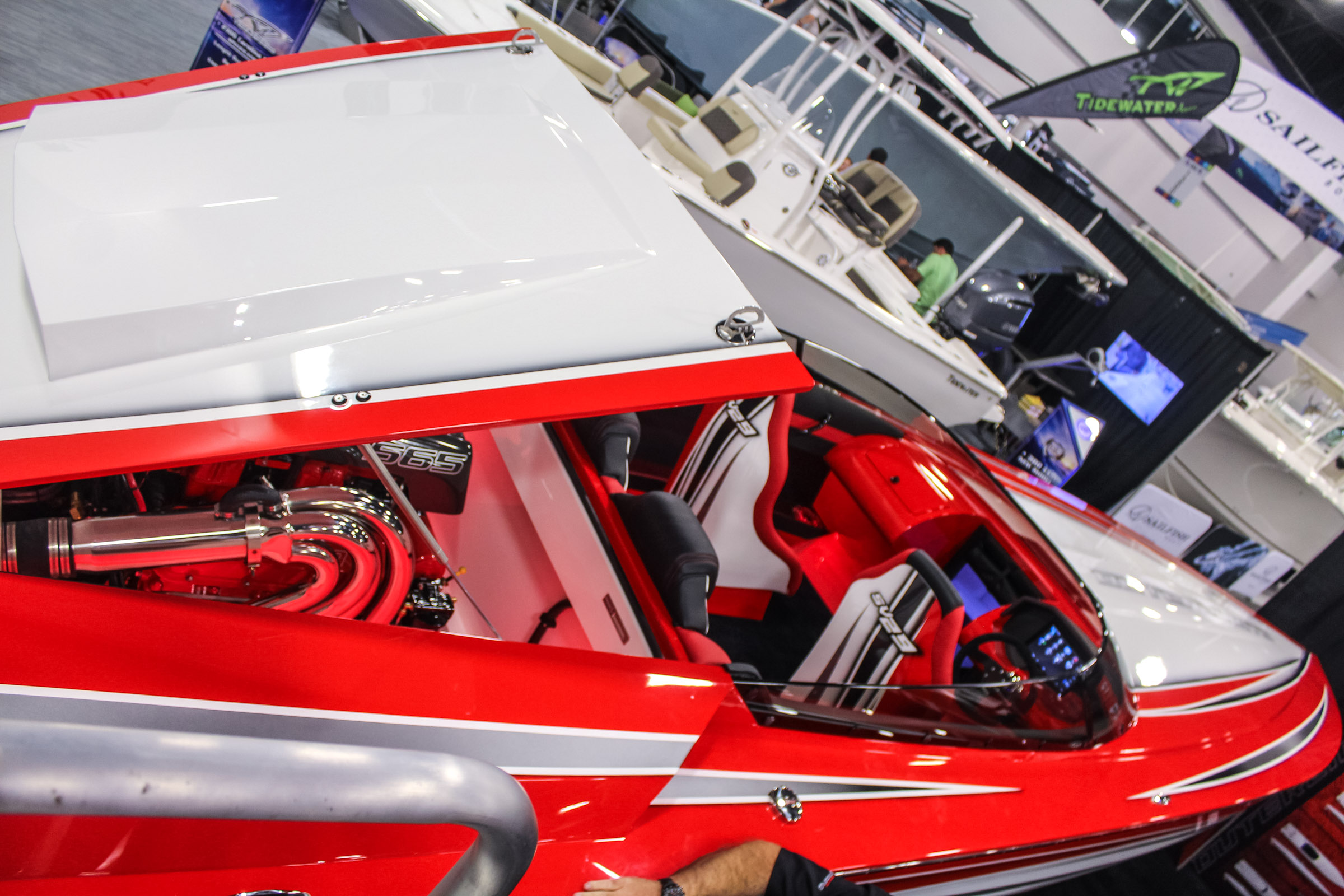 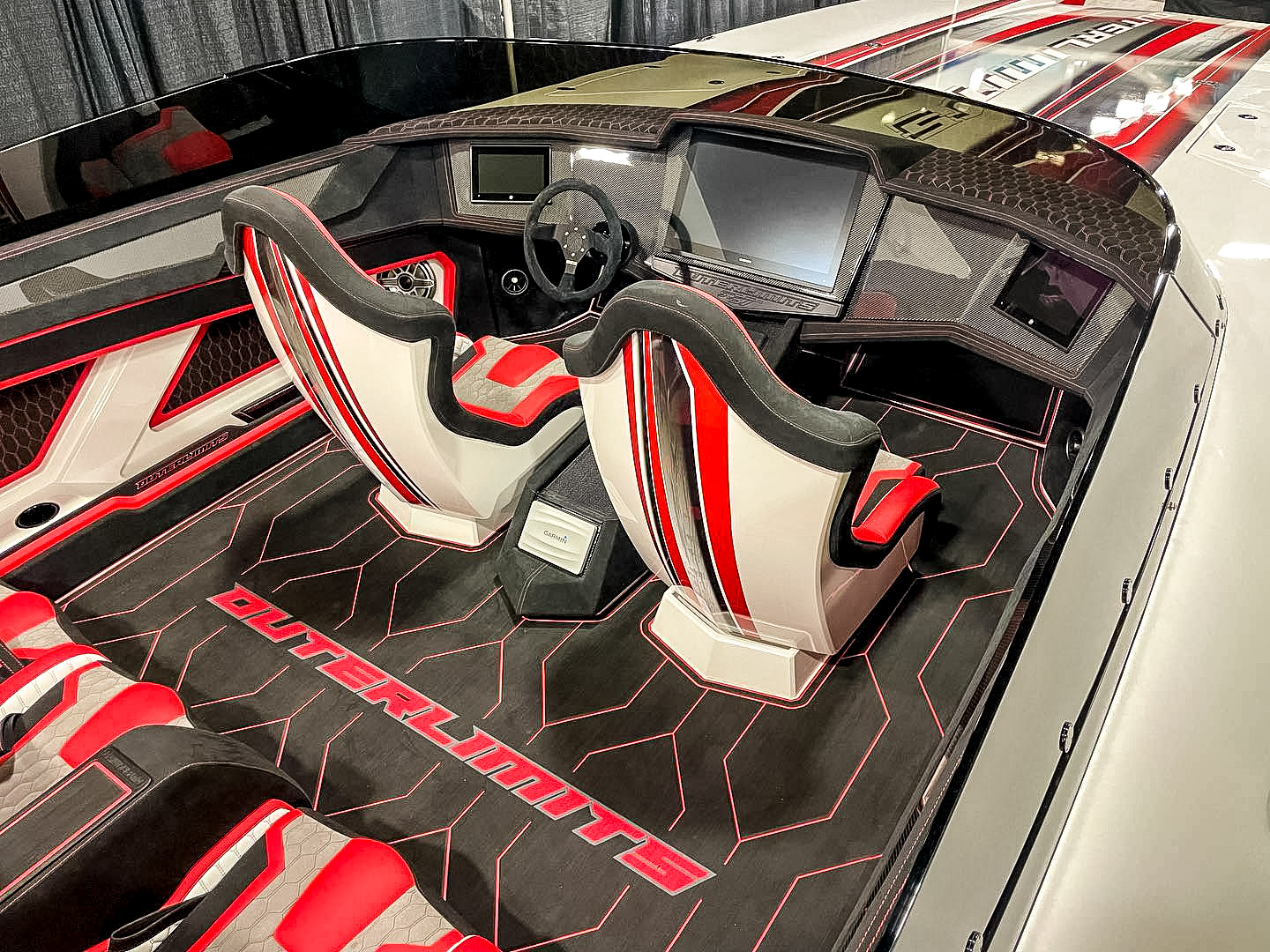 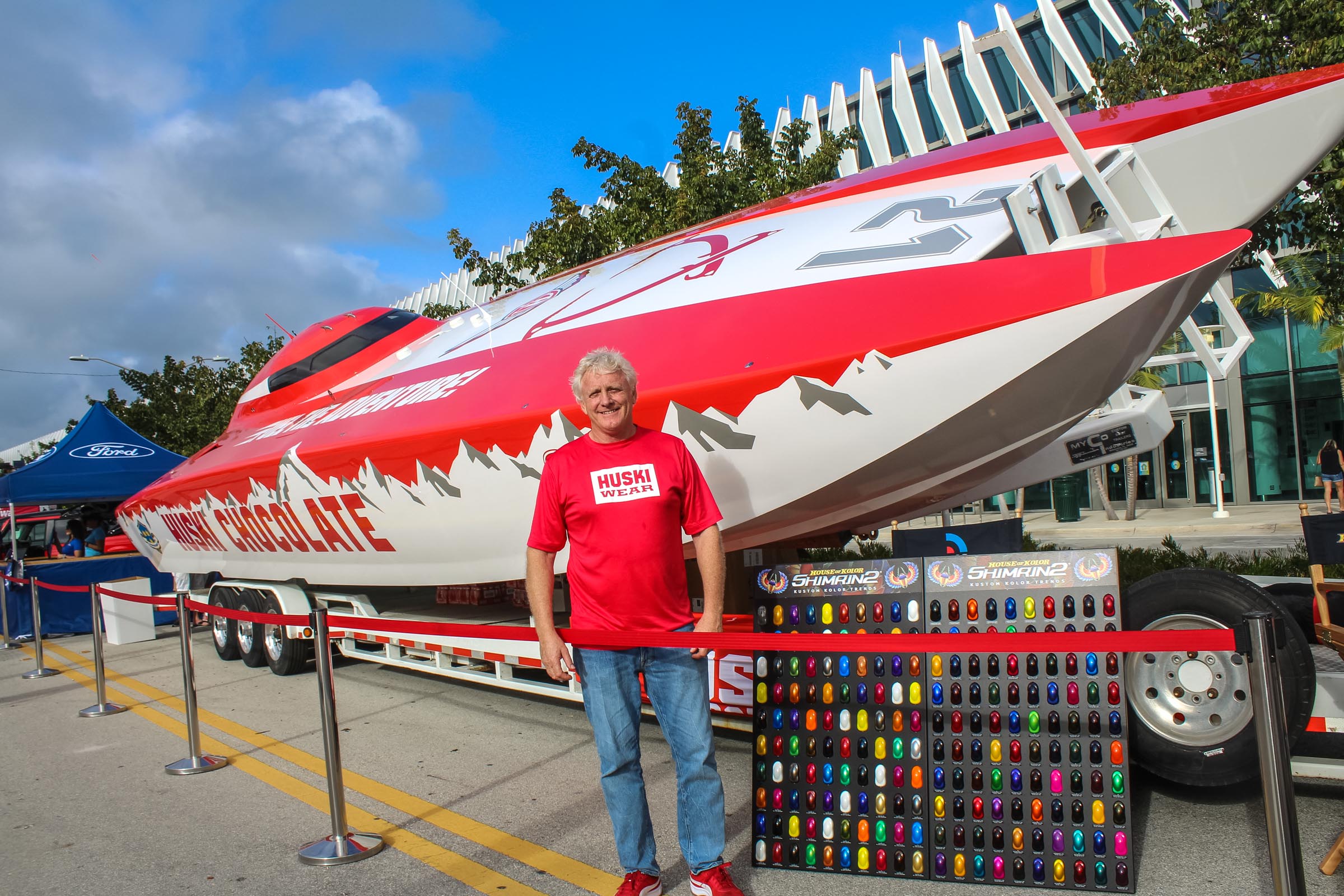 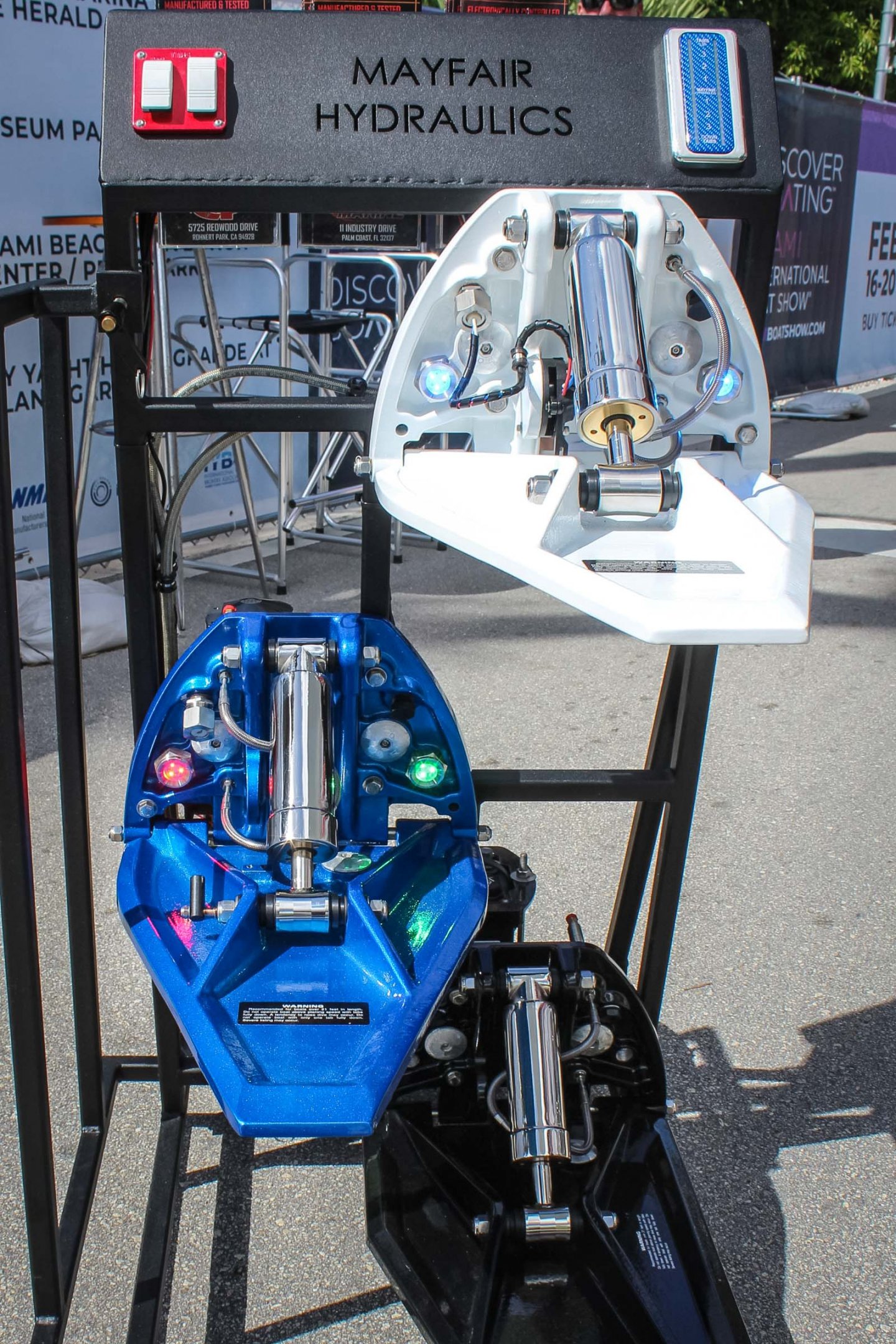 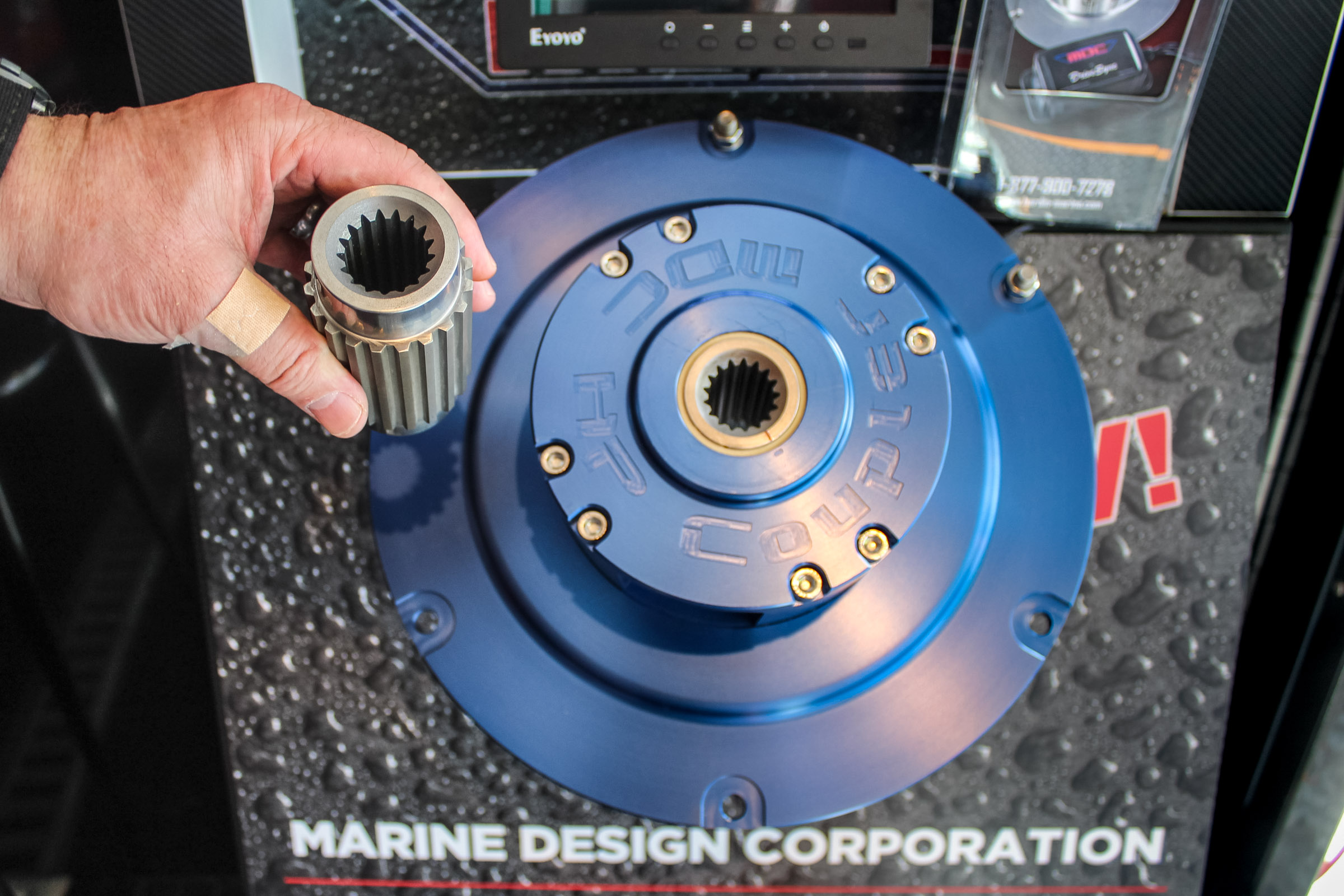 H Craft and Velocity Pique Curiosity
​
Back across the bridge wrapping things up with some in-water action at Sea Isle Marina… curiosity swelled over the H Craft H44Z and Velocity 290SC. The H44Z from Abu Dhabi-based Hayaari Marine, also known as H Craft, made landfall in the USA thanks to Julian Maldonado of Manatee Marine Unlimited, “We werelooking for lines to carry and had been following H Craft on social media, and then three years ago we introduced their smaller model skiffs with great success.”

As for the new center console, Maldonado said they were sold on the quality ride right away, and have four more on order. Priced at $850,000 and pushed to the low-90s with quad 450s, the H44Z will be customizable for poker runs, fishing expeditions or as a hybrid version.

And for anyone wondering about the race-proven technology of the famed padded hull... it still remains an integral part of Velocity Powerboats heritage – only the next generation is more potent with the new powertrain options from Mercury Racing. 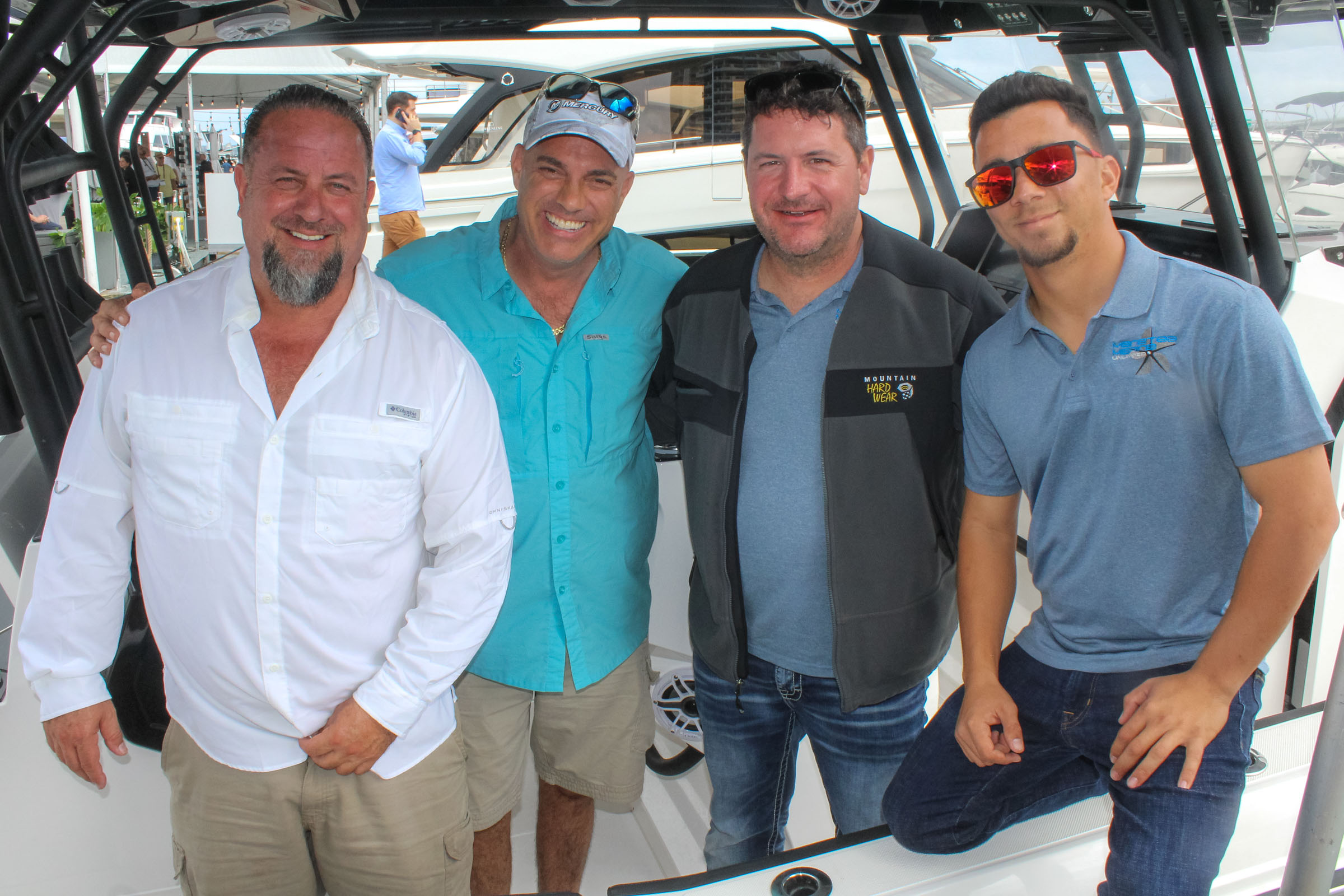 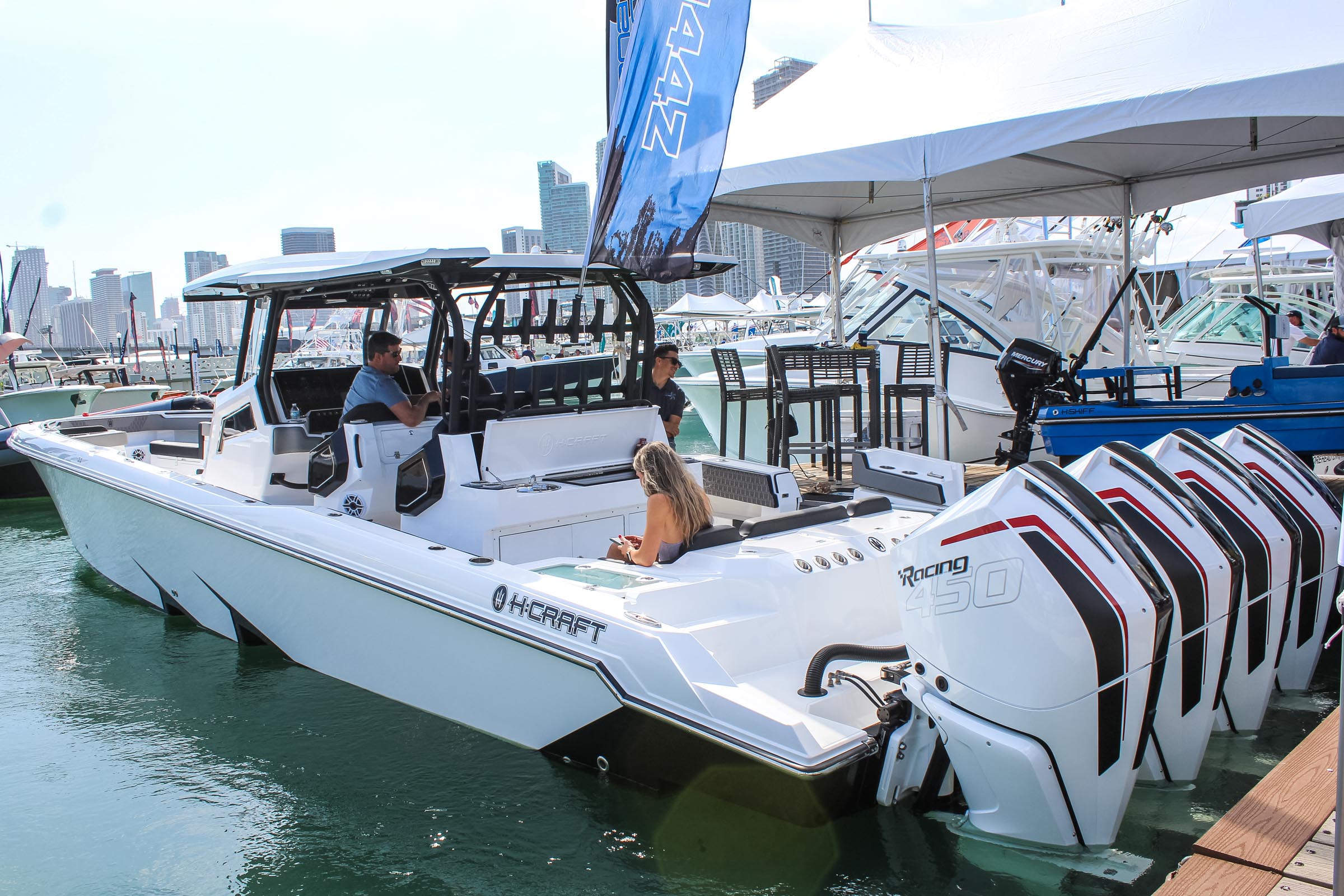 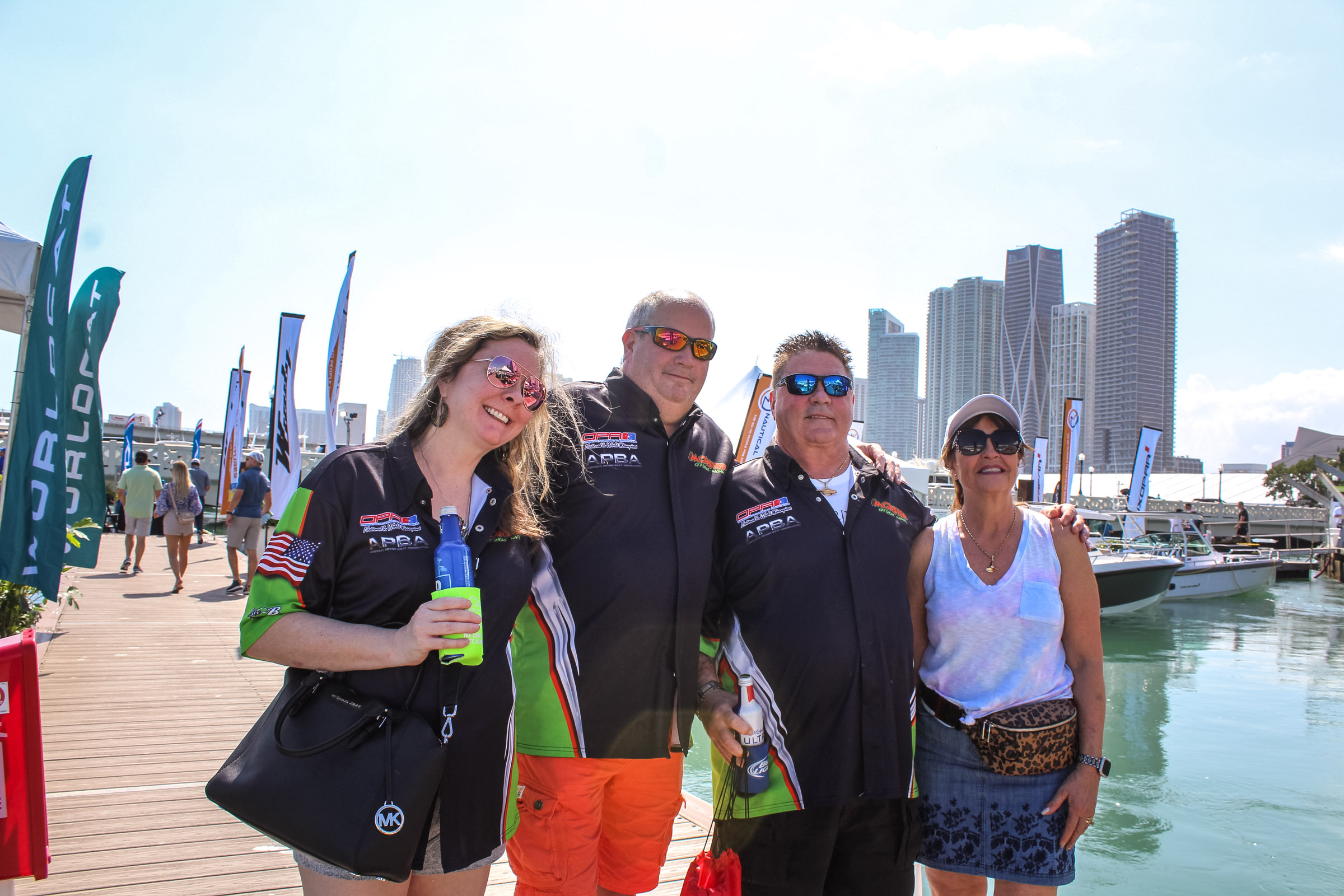 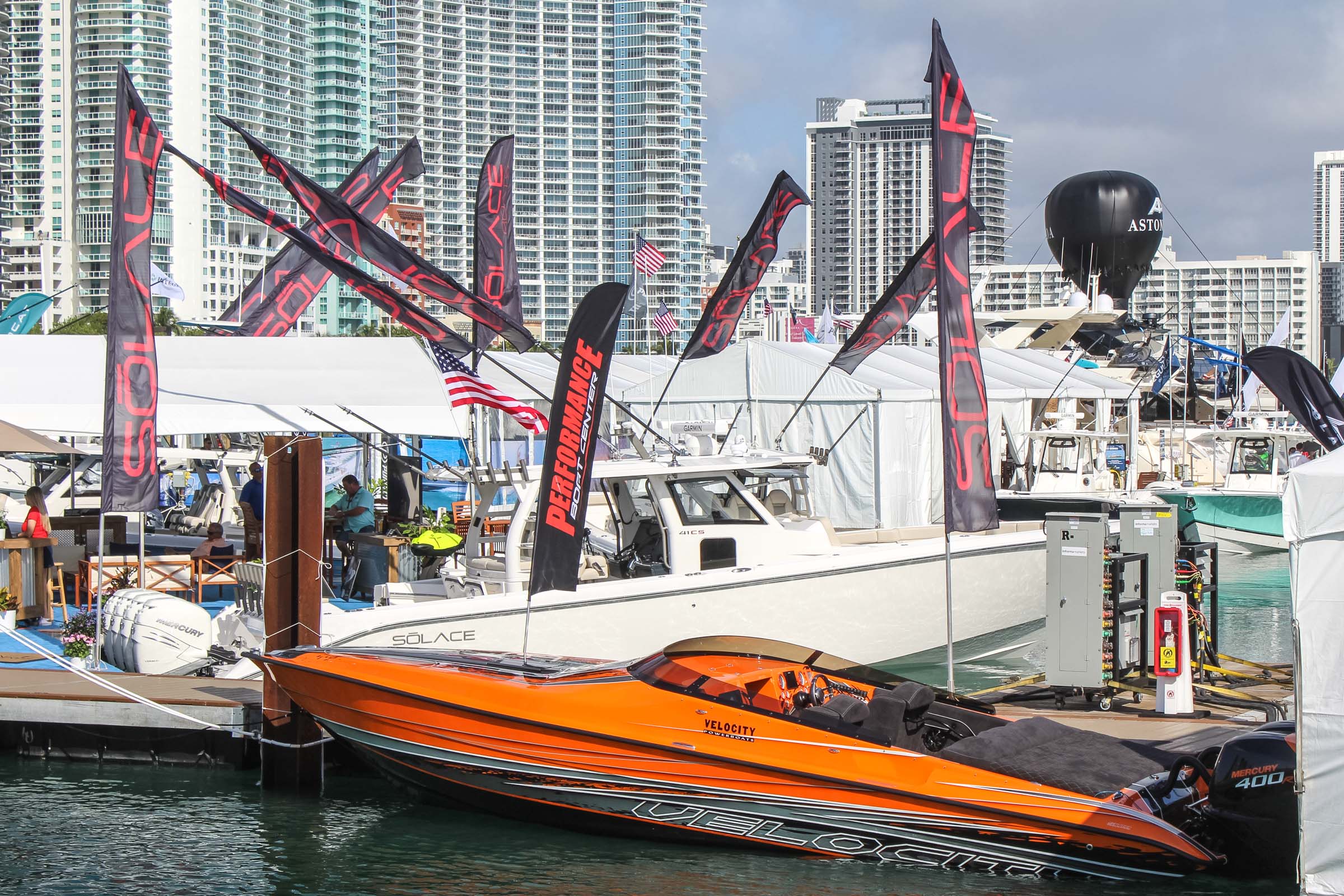 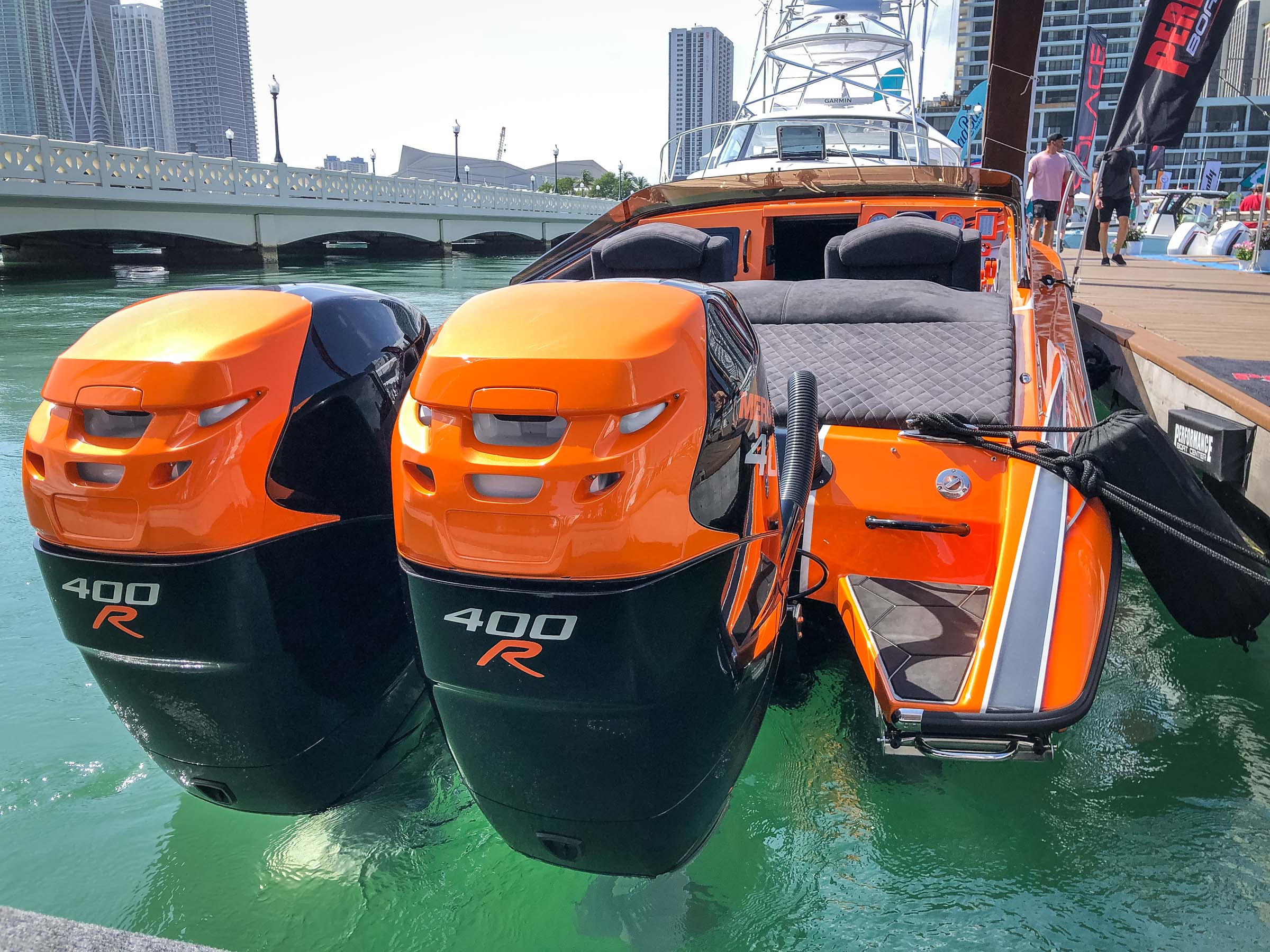 Next up, Adrenaline Powerboats lights up the Palm Beach International Boat Show with a pair of fanatical carbon fiber exotics!