MY BREAKFAST WITH BILL

Article Gallery
Although this is a personal story that not too many people might appreciate, it is a story that’s never been told…..and something I think is worth telling. Hope you find it interesting.


Coming in as the new executive editor at Powerboat Magazine in late 1973, I had the opportunity to meet and get to know a lot of the boat racing legends of that era. One of the first people I met and soon became close friends with was Powerboat monthly columnist, Bill Muncey, easily regarded as the greatest Unlimiited hydroplane driver of that time. And not only was he the winningest driver (62 career wins and multiple Gold Cups) he was also the dominant media star for all forms of powerboat racing. You didn’t have to be a boat racing fan or follower, to know who Bill Muncey was.
. 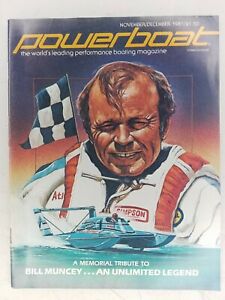 Bill was a forerunner and perhaps a role model for NHRA’s John Force, the never at a loss for words in front of a camera or microphone face of the sport. Win or lose, Bill’s interview was always newsworthy and quotable. Catching a sound bite from Bill was a little like listening to a fully automatic AR-15 at the gun range. It was non-stop words and partial sentences in rapid fire succession until his verbal ammo clip was completely exhausted, and journalists loved it.

Besides being a great boat racer, Bill was also equally talented and successful in the self-promotion game as well. Atlas Van Lines had him locked up as their exclusive driver on the U-boat circuit and he had also golden-throated his way into a yearly sponsorship of a new Prevost motorhome which made pit living at the race sites very tolerable. 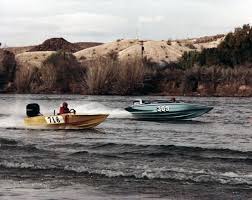 It was now late 1979, and Mod VP outboard racing was the hot new APBA (American Power Boat Association) flavor of the month. Evinrude Outboards recognized Bill’s promotional value and quickly scooped him up as a celeb-driver at several of the more prominent marathon races in the west. Art Carlson of Glastron-Carlson fame got gathered up in the frenzy and willingly supplied a custom-built CVX-20 to showcase the Evinrude 235 HP V-6. Since I was already doing some Mod VP racing on my own and good friends with Bill and Art, Evinrude slipped me into the empty co-driver’s slot which worked out well since Bill and I were very close to the same size.

Meanwhile, the Evinrude/OMC PR team back in Waukegan was hard at work getting their money’s worth out of the Muncey connection. And, they hit a jackpot. 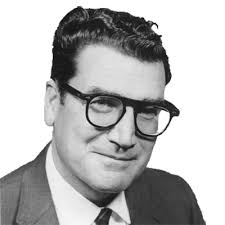 L.A. Times sportswriter/columnist, Jim Murray, responded to one of the Evinrude media queries. Murray had heard of Bill Muncey and recognized him as powerboat racing’s biggest deal. Although hardly a main-stream sport that Murray was familiar in covering, it didn’t matter, Muncey was enough of a story himself to peak Murray’s interest.

Before we go any farther, a more thorough explanation of who Jim Murray was is necessary. Murray wasn’t just another local sportswriter, he was the holy grail of all sportswriters across the entire country. 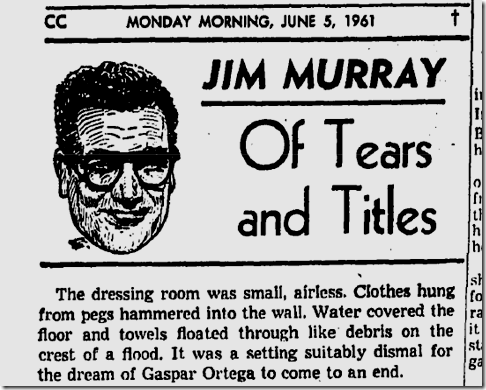 He was voted sportswriter of the year 14-times. He was a Pulitzer Prize winner. He was nationally syndicated in over one-hundred newspapers. The Baseball Hall of Fame honored him with their J.G. Taylor Spink award. Before his 37-years with the L.A. Times, he wrote for Sports Illustrated and Time Magazine. And although nearly blind in his later years, Murray continued to write his daily columns for the front page of the L.A. Times Sports section up until one-day before his death on August 16, 1998. He was genuinely ‘the big deal’.

When we got the news that Murray wanted to meet up with Bill to do a some background for a column, it was a little like getting invited to the north pole to meet up with Santa Claus a few days before Christmas. Murray said let’s do breakfast at the famed Riviera Country Club in Pacific Palisades, California where he was a long-time member.

With a date and time set, Bill, myself and Art Carlson piled into a car and made the trek west from Anaheim to one of the most revered golf courses in the country. When we arrived at the dining room in the club house, Murray was already seated at the table with coffee cup in hand. 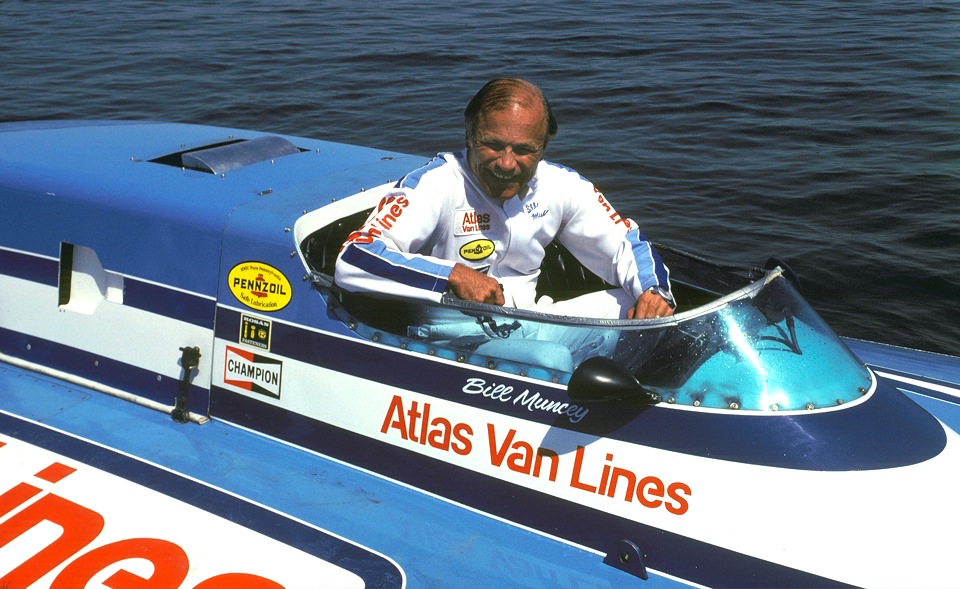 For me, this was better than meeting the Beatles, or the president. Murray had been a personal idol of mine for at least 25 years, reading his daily columns religiously every morning. I couldn’t wait to watch the master at work. I wondered if he was going to have pen and spiral note pad in hand, or maybe put a tape recorder down on the table to preserve every word, or perhaps bring a his personal scribe along to jot down notes while the two talked.

We got to the table at the club, shook hands and seated ourselves. A waiter quickly appeared and brought us coffee and menus. I was a little concerned because Bill was empty-handed, no scrap book or even a typed-out resume of his many boat racing accomplishments.

We all ordered breakfast and then the ‘small’ talk began. A little bit about where Bill was from, how much travel he did on the Unlimited circuit, what parts of the country he liked best, what made him want to be a professional boat racer and so on.

A few minutes later our breakfast arrived at the table. Conversation continued but at an understandably slower pace. I figured that the more formal interview portion of the meeting must be coming after we finished eating.

About fifteen minutes later, the breakfast dishes were cleared and I anticipated watching and listening the master go to work. I was wondering, however, where was the pen and notepad, and still no tape recorder. The pace of the conversation then picked up a little but the subject matter never seemed to get around to boat racing. Murray appeared very content to chat about other things in Bill’s life, how he liked San Diego living, his family, and if he ever played golf.

Again, I thought this must be a warm-up to the real interview process coming shortly. So far, not a note was taken. This went on for about another ten minutes until Murray pushed his chair back a little from the table and thanked us all for taking the time to have breakfast with him that morning. He even picked up the tab.

I was a little dumbstruct. Did we blow this chance for a big-time interview with America’s most read and respected sports journalist? Was it something we said or didn’t say? Bill and Murray exchanged phone numbers as we all stood up. Murray said he’d be in touch if there was anything else he needed.

As the three of us rode back in the car to Anaheim, I asked Bill if he had ever had an interview quite like that before. He said he hadn’t. We all wondered what kind of a column Murray would write, or if there would be a column at all.

A little more than a week passed and Bill got a call from someone at the L.A. Times office. They told Bill that Murray’s column about him was scheduled to run the following Thursday. 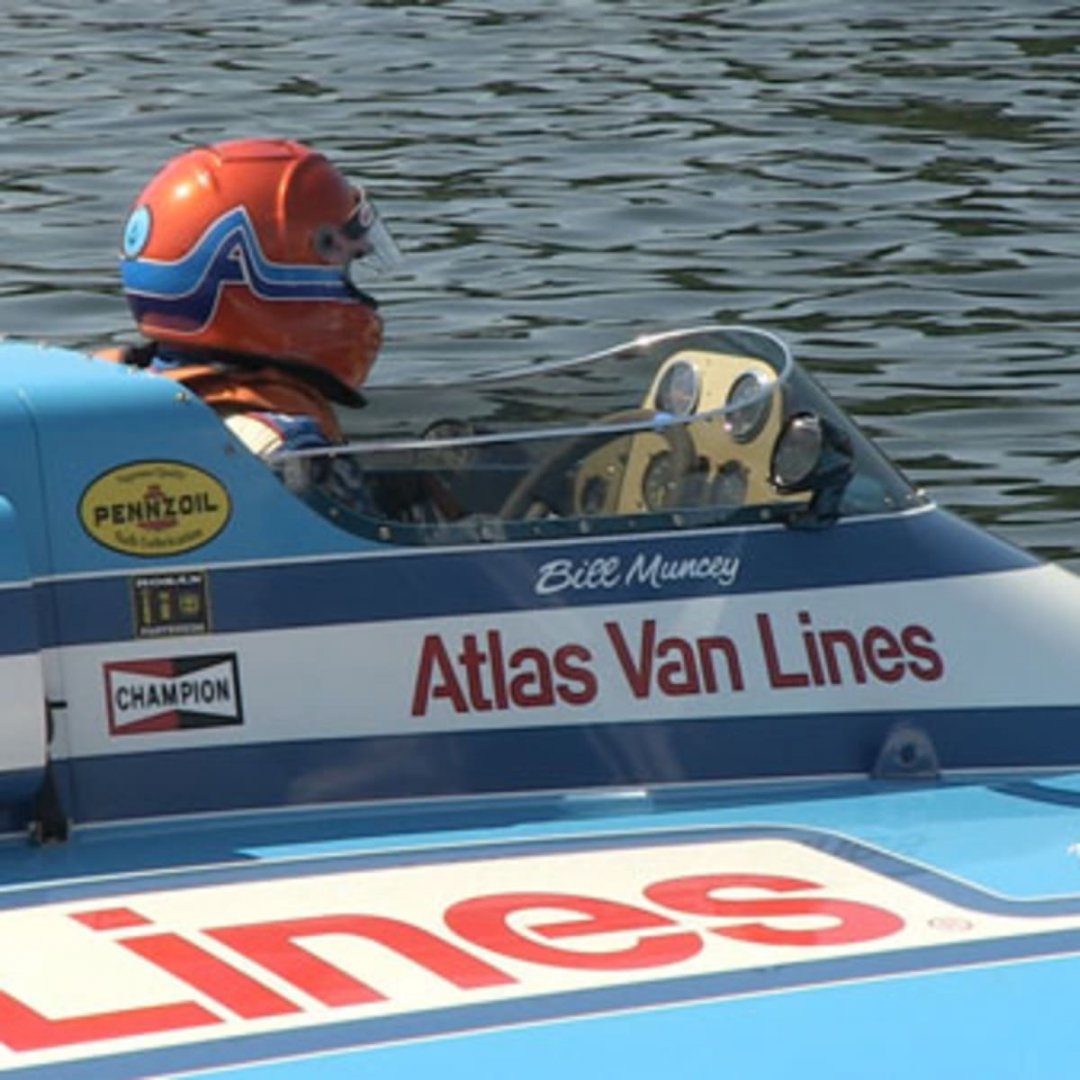 And sure enough, that next Thursday, Bill’s column was on the front page of the L.A. Times sports section. It was different, insightful and an interesting read like all of Murray’s columns, but it had very little if anything to do with Unlimited hydroplanes or boat racing in general. It did mention, however, that Bill was going to be one of about one-hundred boat racers competing at the annual Parker Enduro the following month.

As a boating journalist at the time for Powerboat Magazine I was left puzzled about what had happened. We had had a great breakfast meeting with America’s number one sportswriter. I thought I was going to pick-up some pointers on how a pro conducted an interview. Instead, all I really found out was that Murray drank his coffee black and liked his eggs over medium. But maybe greatness isn’t something you can always observe, it just is.

"Dangerous? Unlimited Hydroplane racing is defined as one of the cruel sports. We figure anything less than death is a minor accident," comented Bill Muncey in 1979. Bill Muncey died on October 18, 1981 while leading the final heat of the World Championships in Acapulco, Mexico.
Reactions: RVR SWPR, Sharp Shooter, 94Nautique and 6 others

Very entertaining article, thanks for posting. Watched Muncey many times in the iconic Atlas Van Lines on the Detroit River, always battling the Bud boat. Truly a legend.
I always was a Bill Muncey fan.