Recently revived, it was phenomenal to see the cat’s been let out of the bag and to have Phenomenon back in the southernmost city of Key West where it was first let loose at the 29th annual SBI Key West World Championships in 2009. The family of the iconic race-ace and spicy-by-nature Popeye’s Fried Chicken and Biscuits king Al Copeland, donated the 56-footer to the noteworthy non-profit animal rescue and rehabilitation facility Green Field Reserve, and we have it to thank for the feline’s comeback.

In order to grasp the immenseness of the cat – from its actual creation to the jubilation it created among the masses with the anticipated world record it hoped to break – it helps to first have an understanding of how grandiose Copeland himself was. 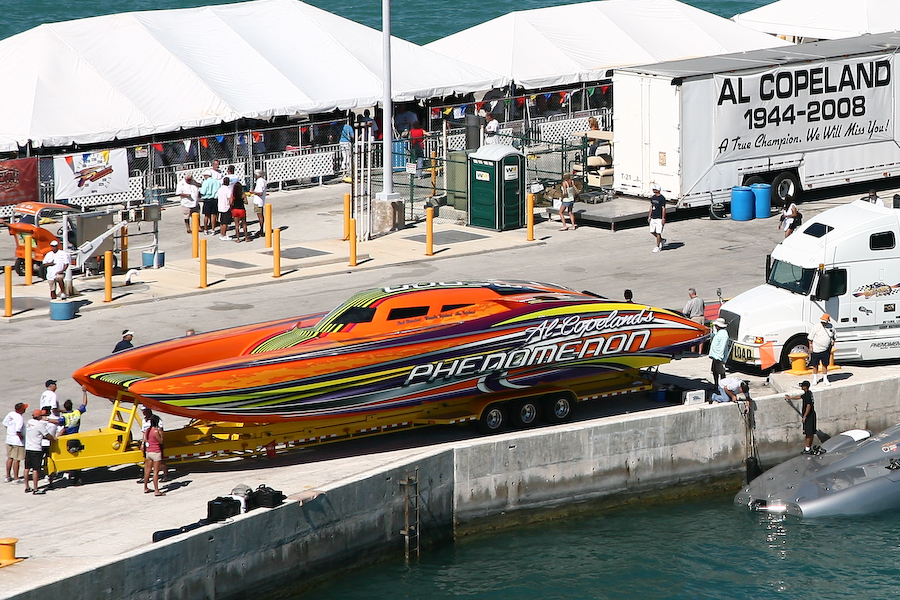 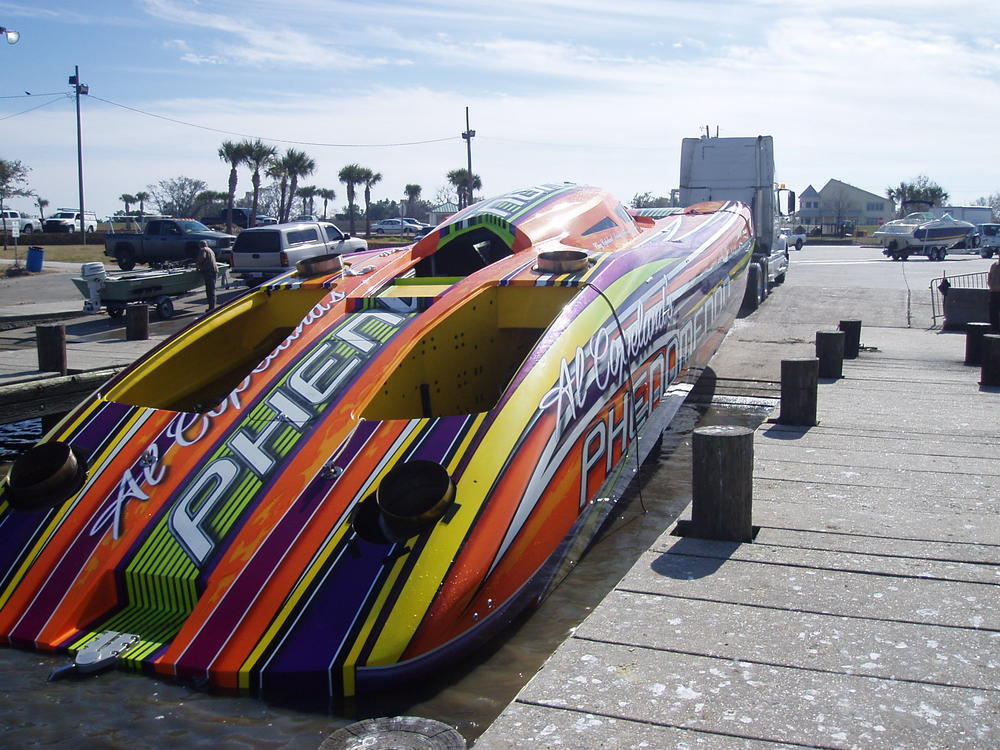 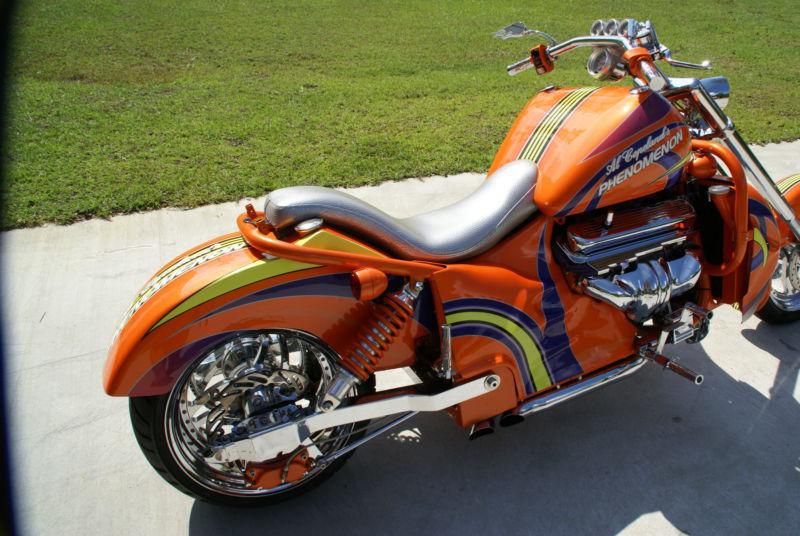 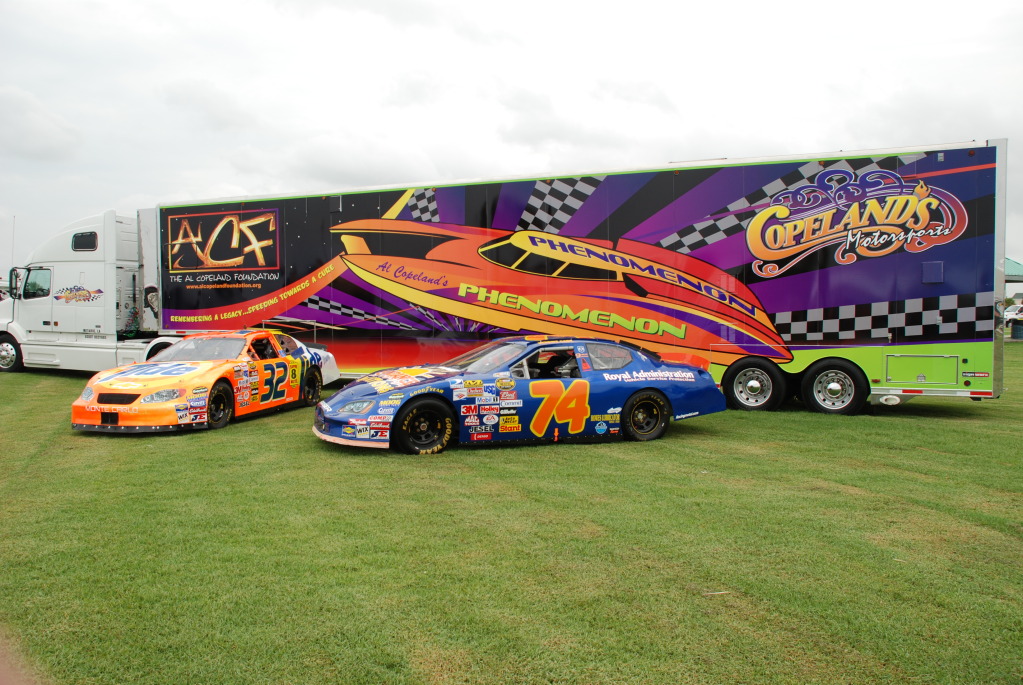 The REVIVAL: Phenomenon
​
Six-time national champion and owner/driver of the Popeye’s Offshore 50-foot aluminum Cougar cat powered by four 700-hp MerCruiser engines, Alvin Charles Copeland Sr. had a heart bigger than his fleet of fast-movin’ mobiles (in the collection were a helicopter, 120-foot yacht and Lambo) and fast-food franchises. Big Al, as he was fondly known as, was flamboyant, family-oriented and a fanatic of fun all bundled up in one.

The southern gentleman, a local icon in New Orleans and a social icon (frankly everywhere) was both fond of… and fantastic at… throwing five-star fiestas with unlimited invitations. His middle name should have been “philanthropist,” for he always gave all he had. Not to mention, Popeye’s Fried Chicken flowed by the bucket loads to all hands in his reach.

He was as competitive as he was compassionate. The offshore racer built Phenomenon to break the fastest propeller-driven water-speed record in the world, which at the time was 220.5 mph set by Dave Villwock in the Miss Budweiser Unlimited hydroplane on March 13, 2004 in Oroville, California. Yes drag boats go faster, but Copeland was gunning for the calculated kilo in a two-way pass. (Ten years later the Spirit of Qatar upped it to 244 mph at LOTO in the 50-foot Mystic Al Adaa’am with owner/driver Sheikh Hassan bin Jabor-Al-Thani and throttleman Sir Steve Curtis.)

In place of breaking a speed record, what happened next would be heart breaking. Before the boat was finished, Copeland was diagnosed with Merkel cell carcinoma. Following experimental treatments in Germany, in March of 2008 the rare form of cancer took his life at age 64. After the tragedy, his son Al Copeland Jr. and his throttleman and longtime right-hand man at Copeland Motorsports Scott Barnhart, sought out to finish what Copeland Sr. started. 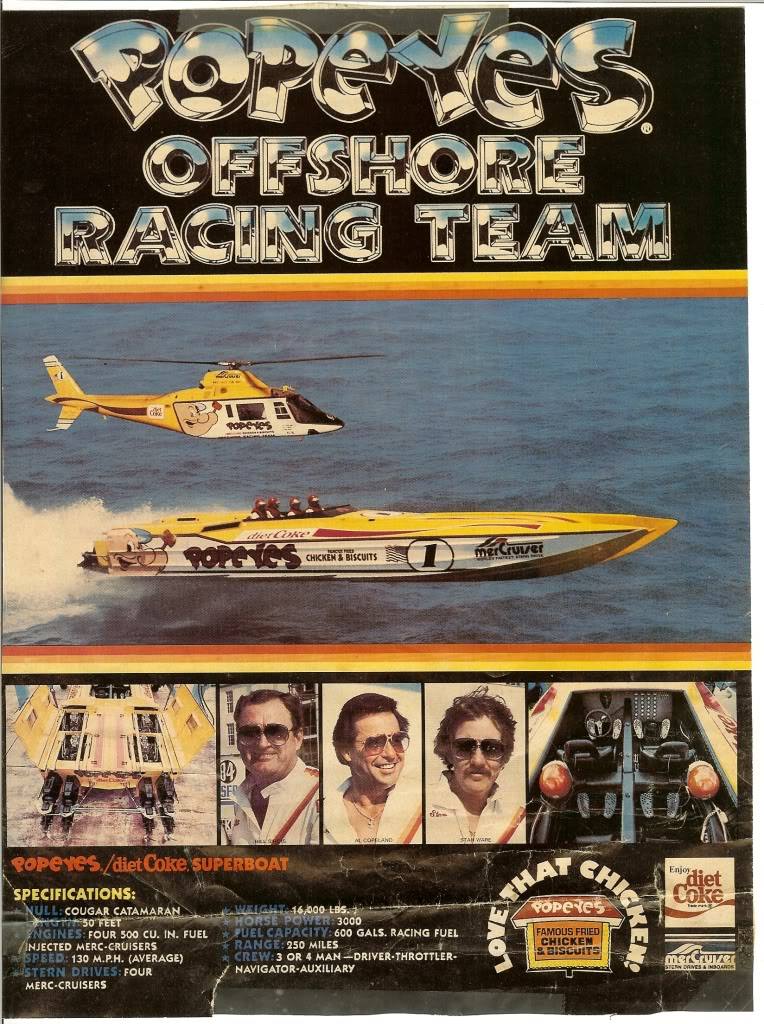 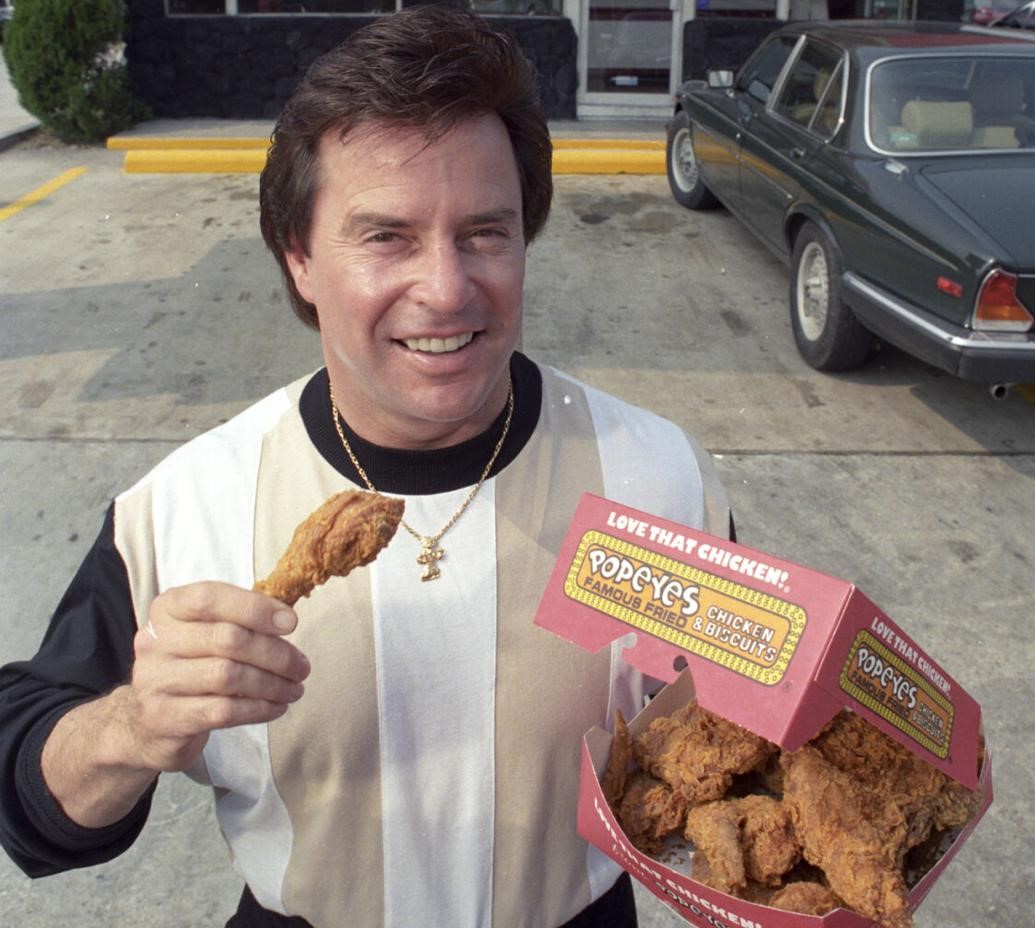 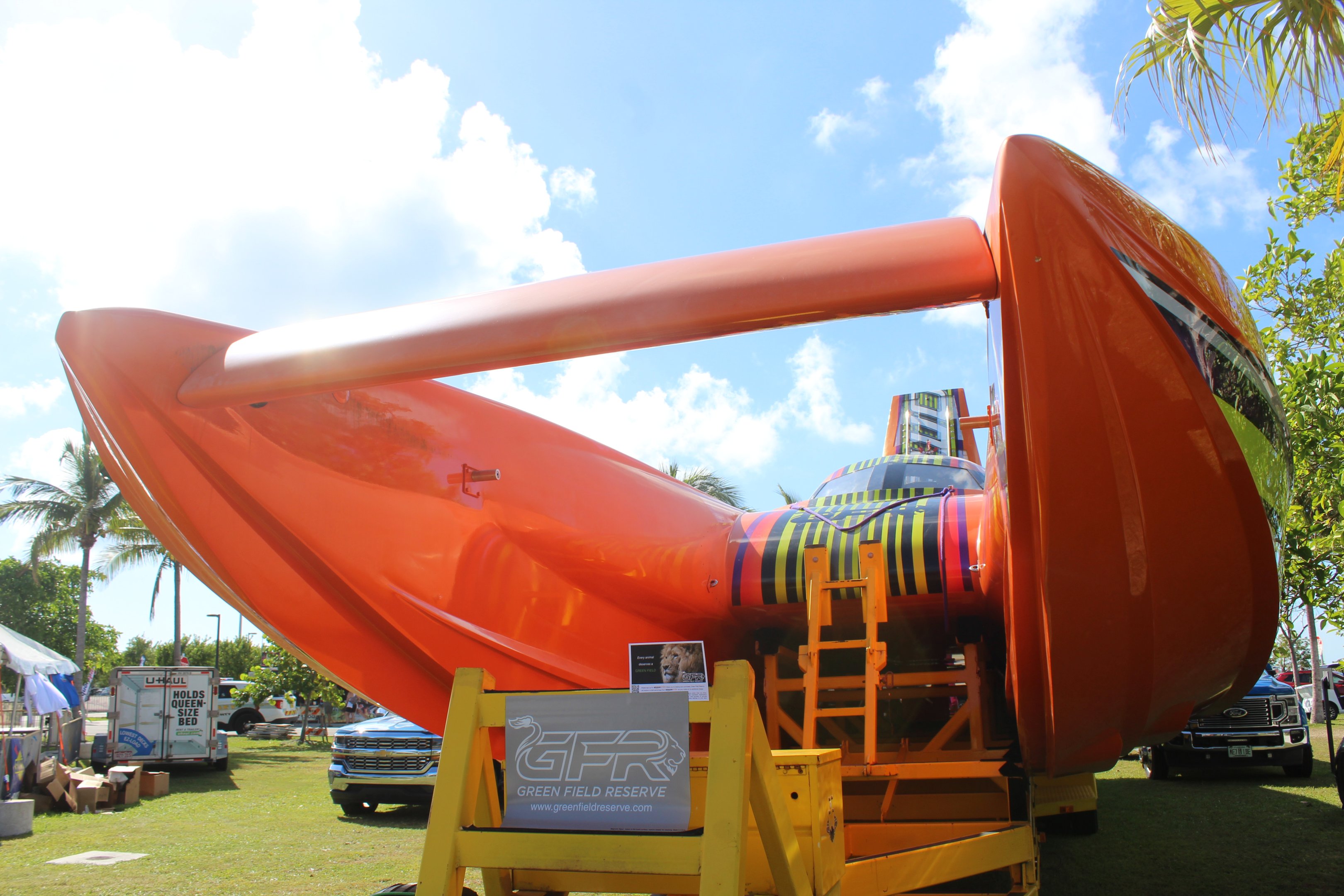 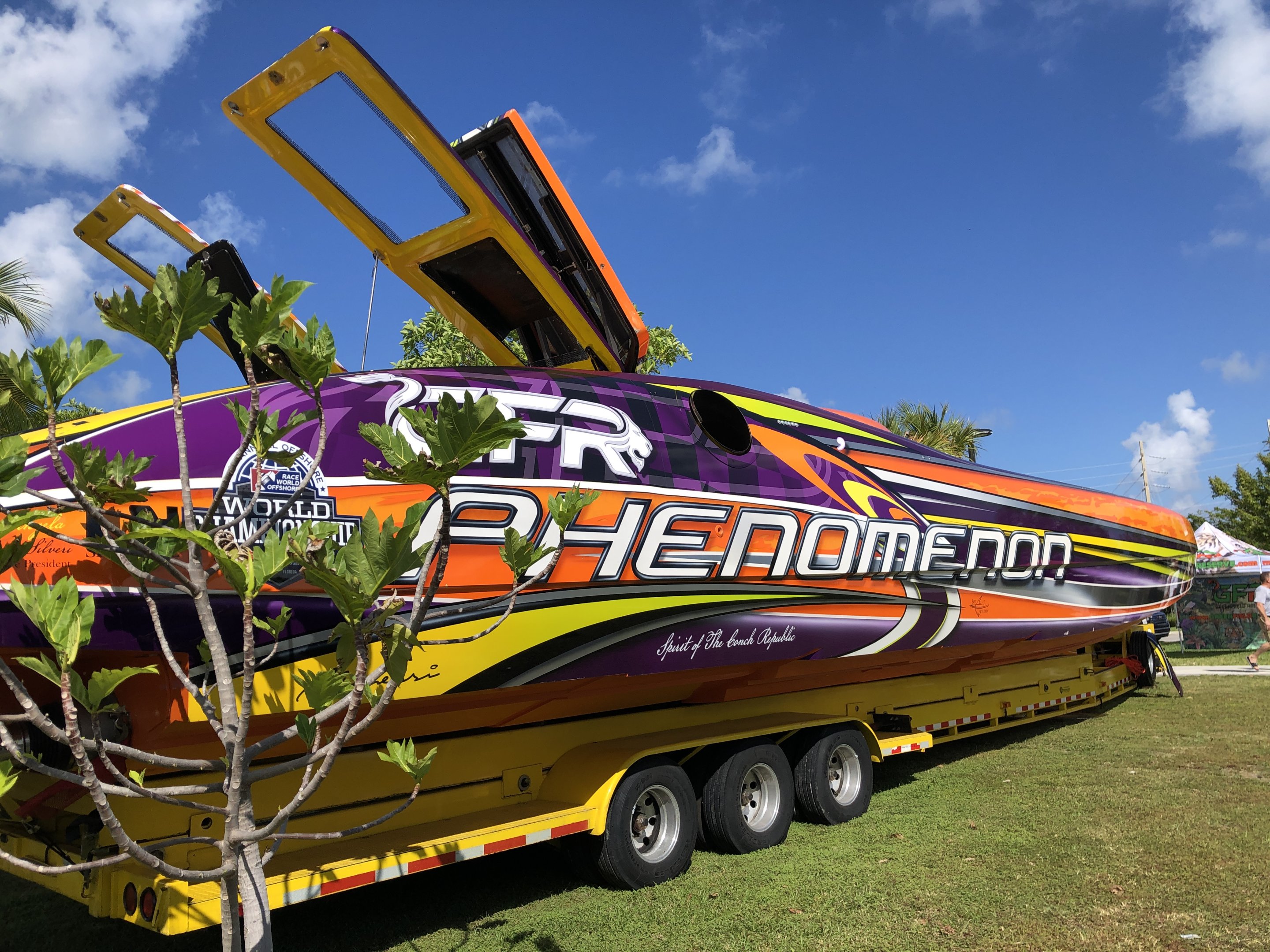 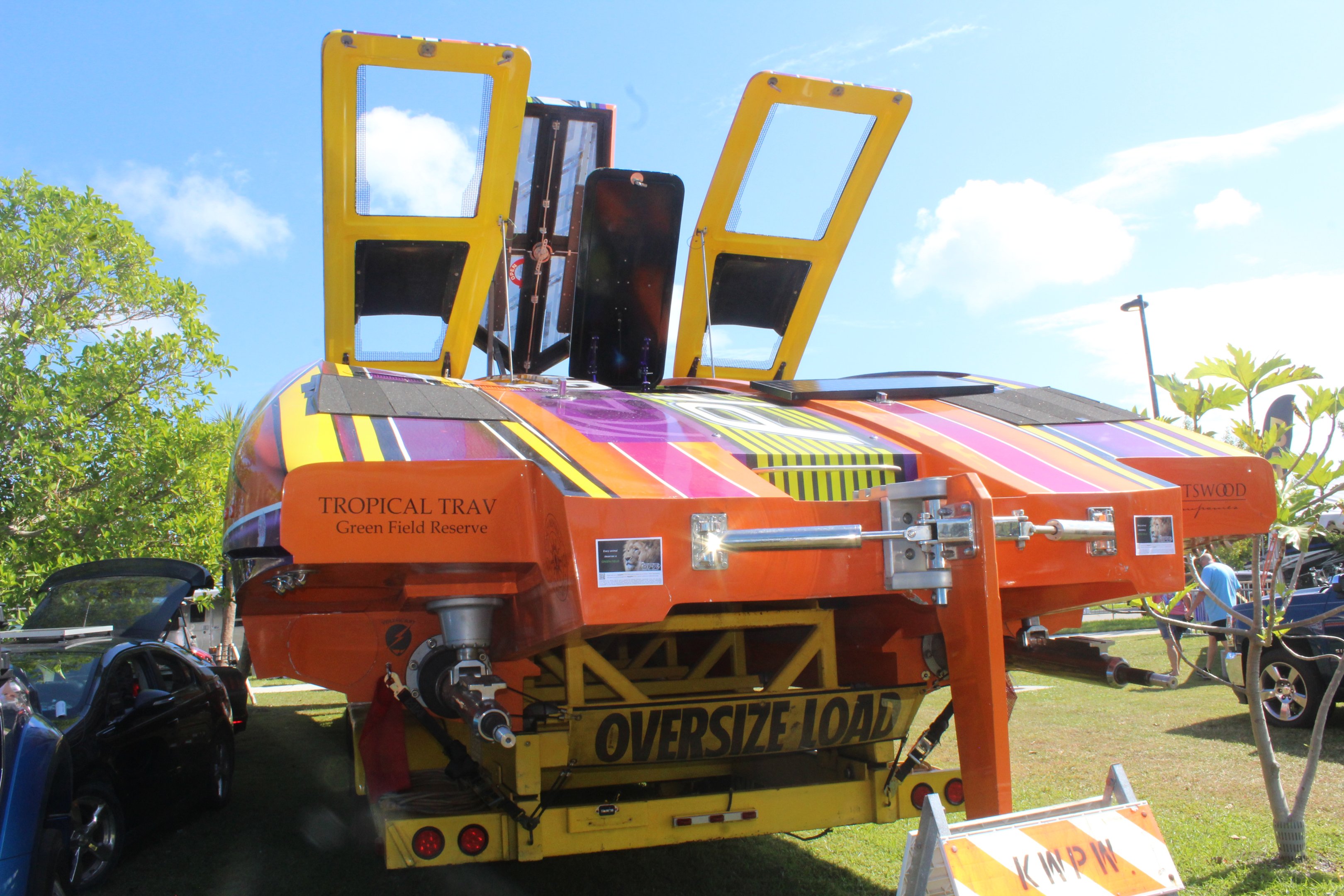 Phenomenon (which actually originated in Al’s head in 1997 as a twin engine 65-footer) had been called everything from a rocket racer and dream machine to the Bugatti Veyron of the speedboat world, but its actual name was the most fitting, in that, the project – which even has a breakaway safety capsule that detaches if the boat starts rolling – created a phenomenon from day one!

With a combined 12,000 horses of raw power kicking out 3,000 hp via each of four T-55-L-7C turbines, delivered through Arneson ASD-11 surface drives – the 56-foot long and 13-foot-wide cat had a purely omnipotent presence. I was at the SBI Worlds unveiling extravaganza on the evening before the Sunday finale, but seeing it now after 13 years, I forgot how gigantic it is until my quest to get a few RDP-worthy pictures without chopping off the front or back.

The buzz from insider intel confirmed the build was based off a Doug Wright, and not a Michael Peters design nor a Skater layup, which had been two theories flying through the air among go-fast geniuses. It was fitted with four custom-made Latham Marine throttles with two shifters to drive from either side; and six slightly staggered, in-house fabricated seats modeled after NASCAR. Two escape hatches were placed in the floor and a third could be found above the center row of seats. Port gauges were installed in order of importance by rows starting with the crucial exhaust temperatures on top; and of its three Livorsi Marine analogue GPS speedometers – the one for turning reads 30 to 200 mph and the two for speed read 130 to 325 mph. Mic drop!

After the Key West baller-bash, the beast made a stop at the 2010 Miami Boat Show before moving on to a series of almost-record-attempts finishing with a not-so-fast top flight of 185 mph in testing. An unfortunate hit with the seawall after forgetting to kill one of the engines took off the tip of one of the cat’s sponsons a day prior to the SBI Kilo Runs during the 2010 Sarasota Suncoast Grand Pix; plus burning an engine during testing at the 2012 Smokin’ The Sound APBA sanctioned kilo run in Biloxi, further squashed any scenarios for world record success.

With any one-off endeavor of this magnitude, the on-going drama surfacing during each splashing was no shocker, but sadly the incessant mechanical gremlins turned the dream machine into a technical nightmare machine. Because the boat was making so much power, the bustle cracked from the flexing of the drives whereby damaging the stern. Additionally, due to the positioning of the thrust tubes, using tie bars to stabilize the movement of the drives was not possible.

Further aggravation as a result of the propellers hitting one another while the boat was running (caused by the transom flex) didn’t help matters nor did the broken propeller shafts and the compulsory need for the re-cutting of larger ones. Four custom-made props (at $15,000 a pop and 6 months to construct) had to be fabricated to accommodate the new 2-7/8 shafts; the composite transom also had to be re-done with special wood to strengthen it. 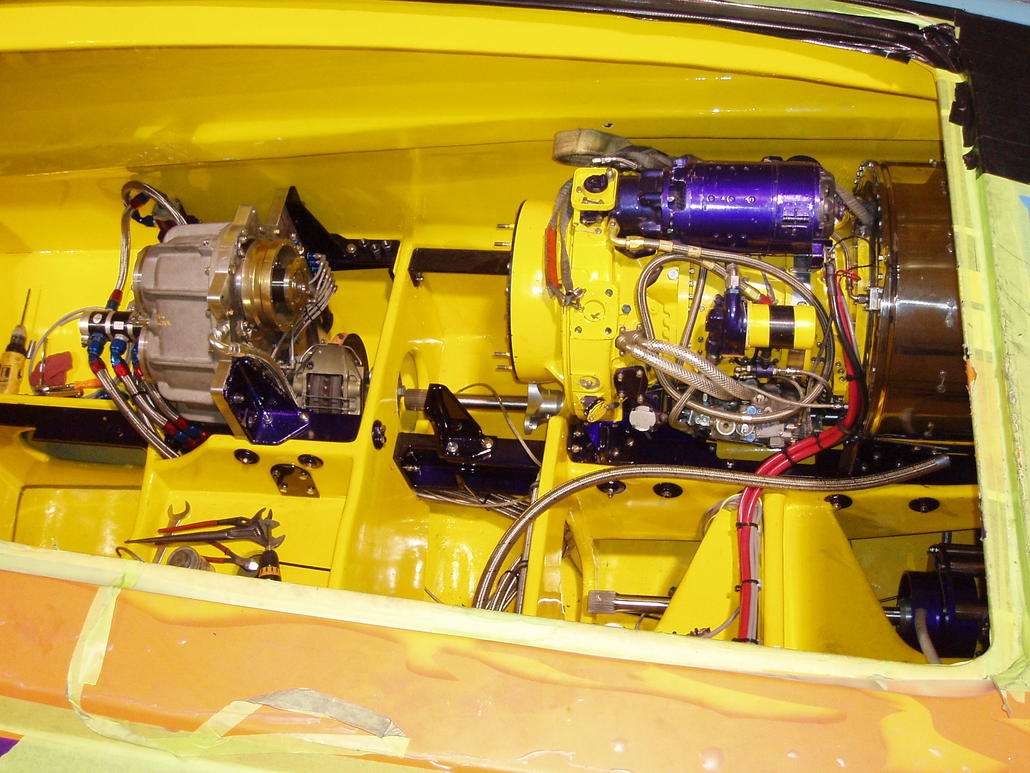 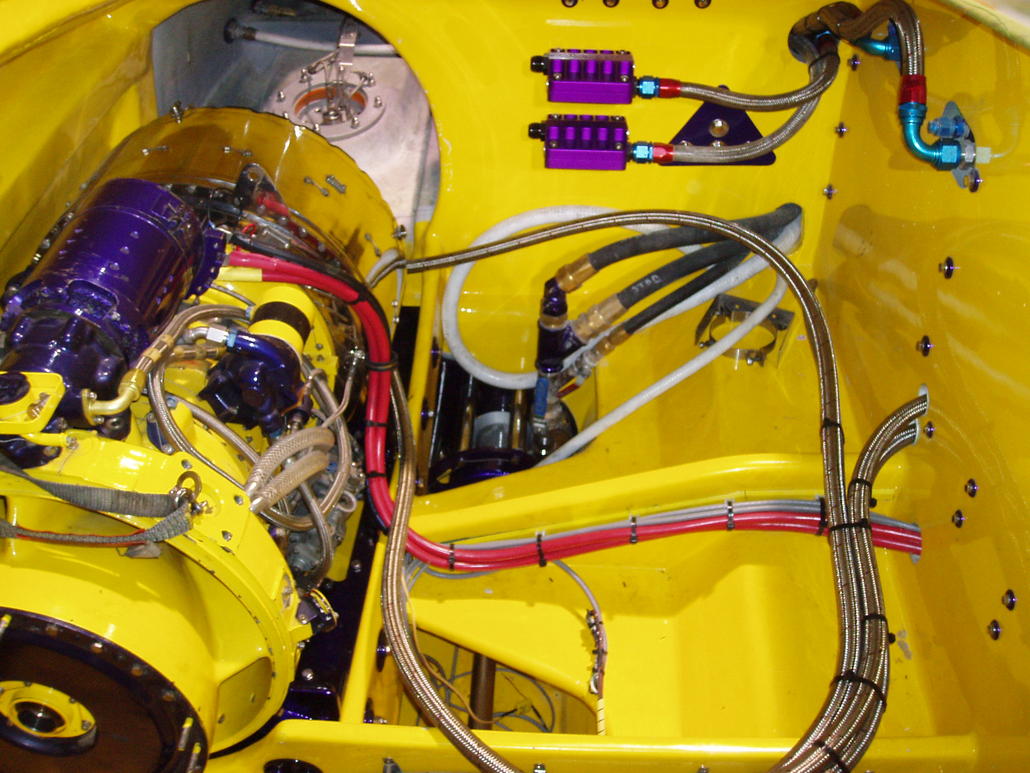 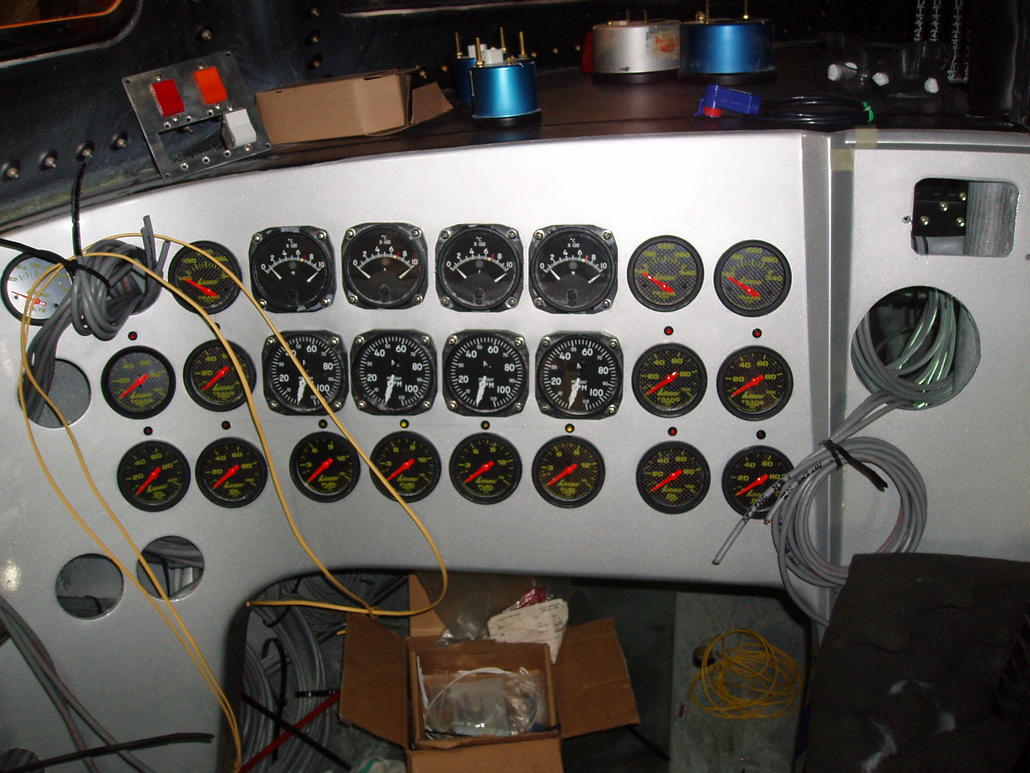 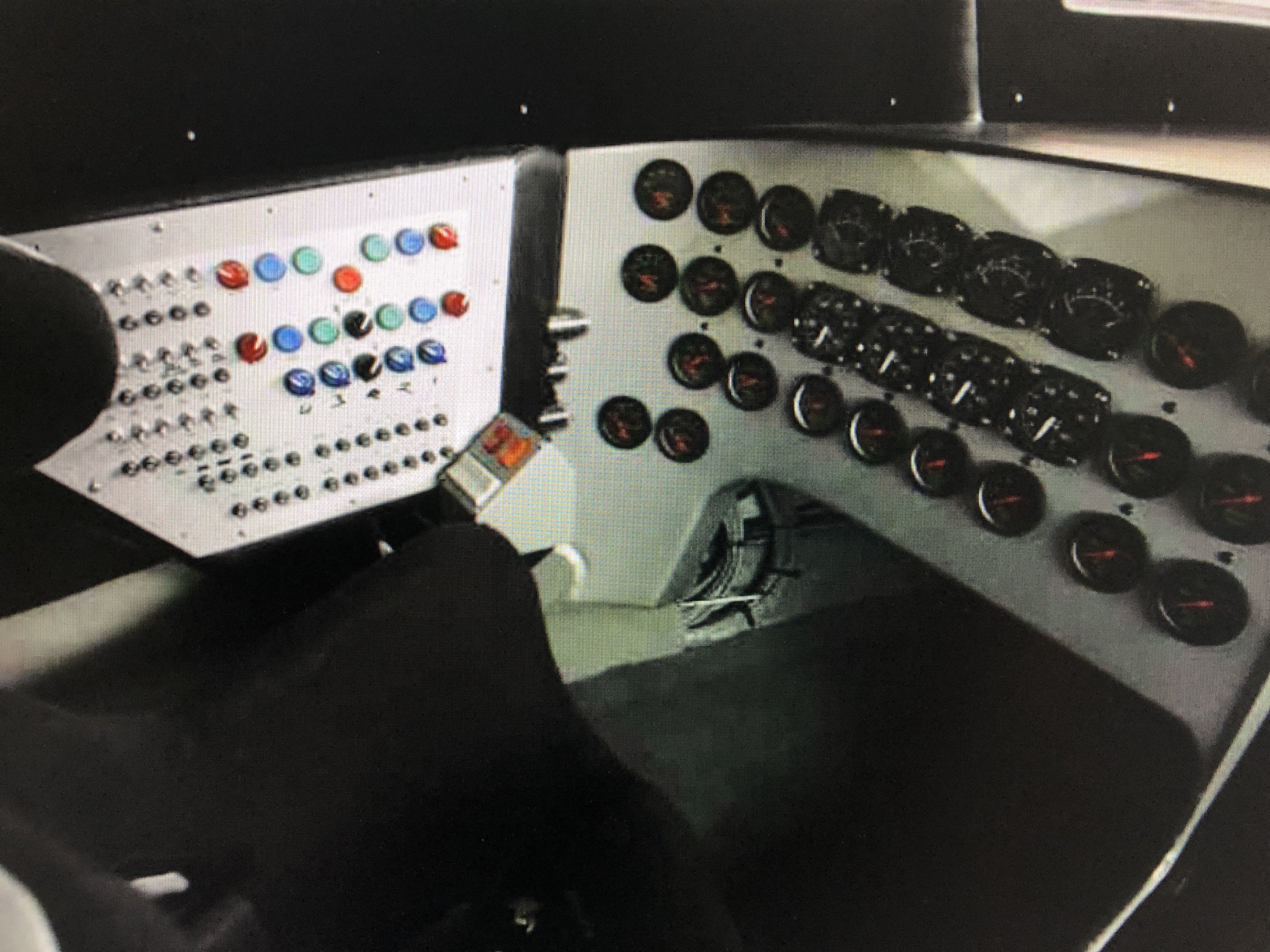 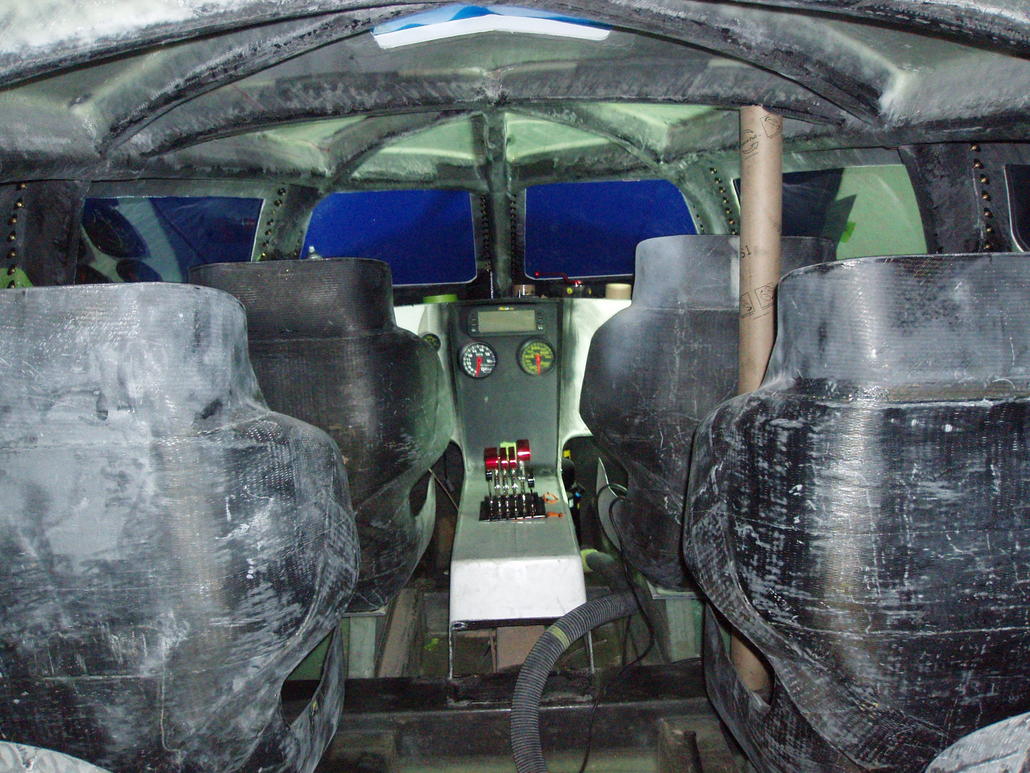 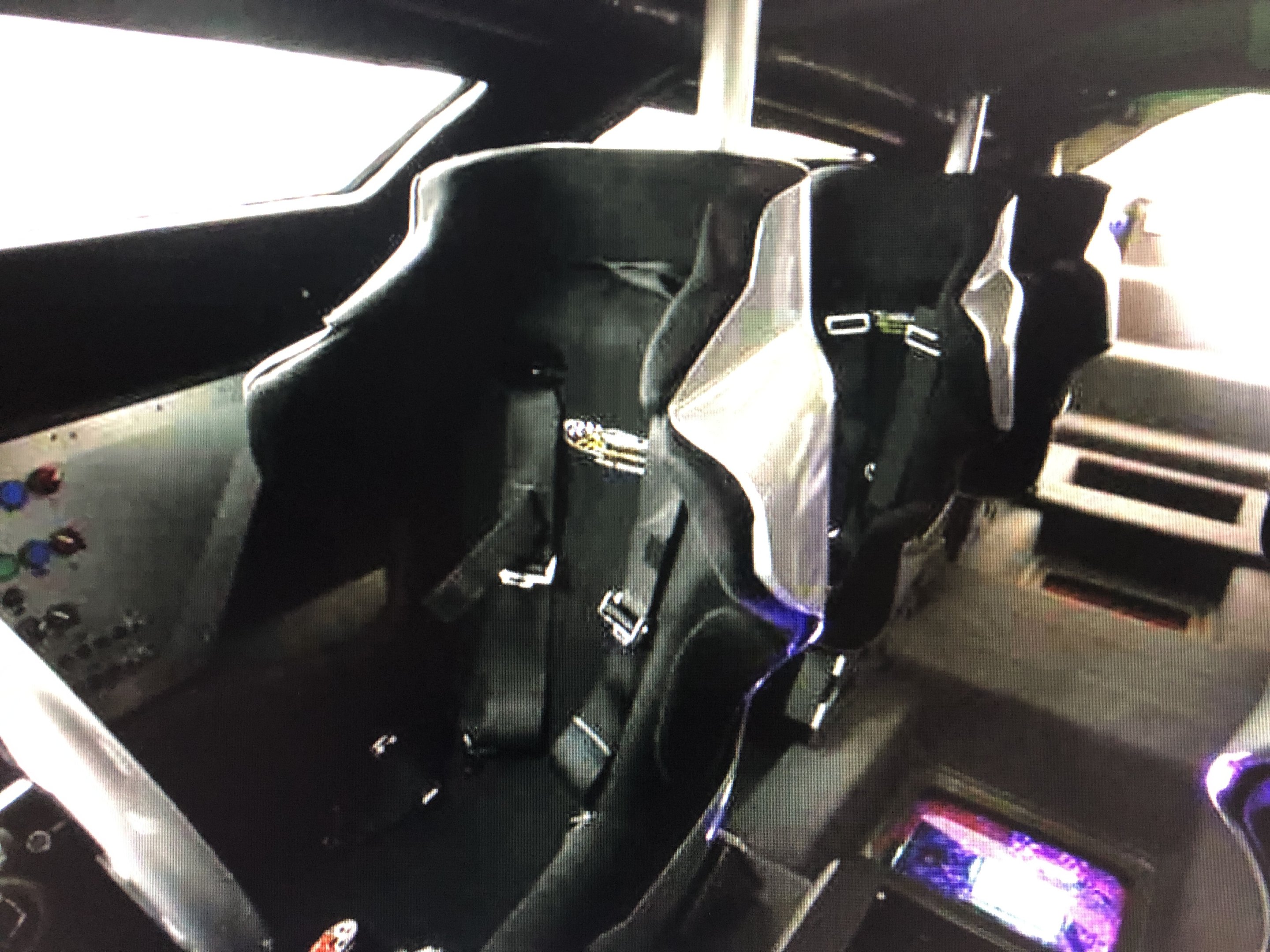 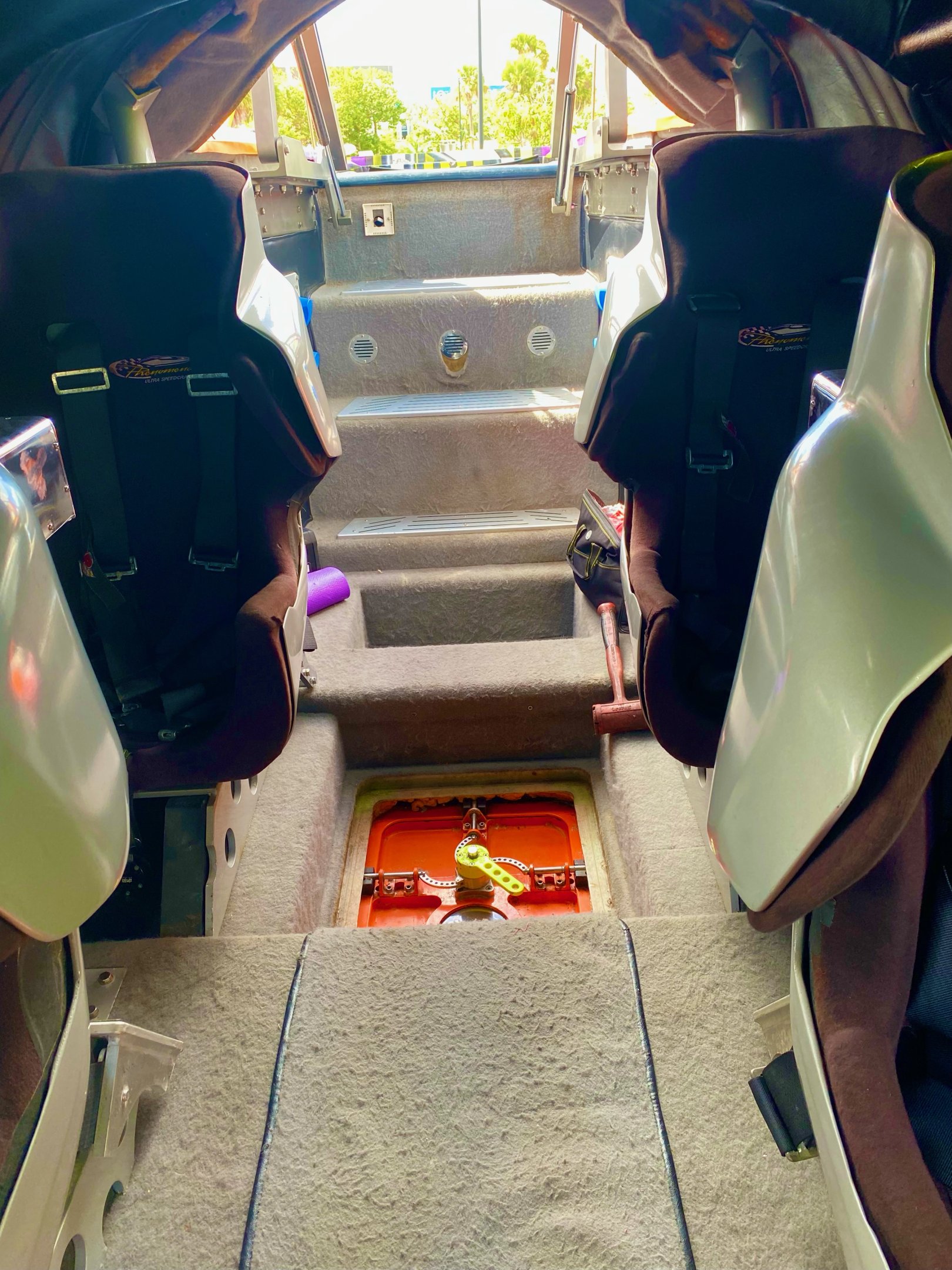 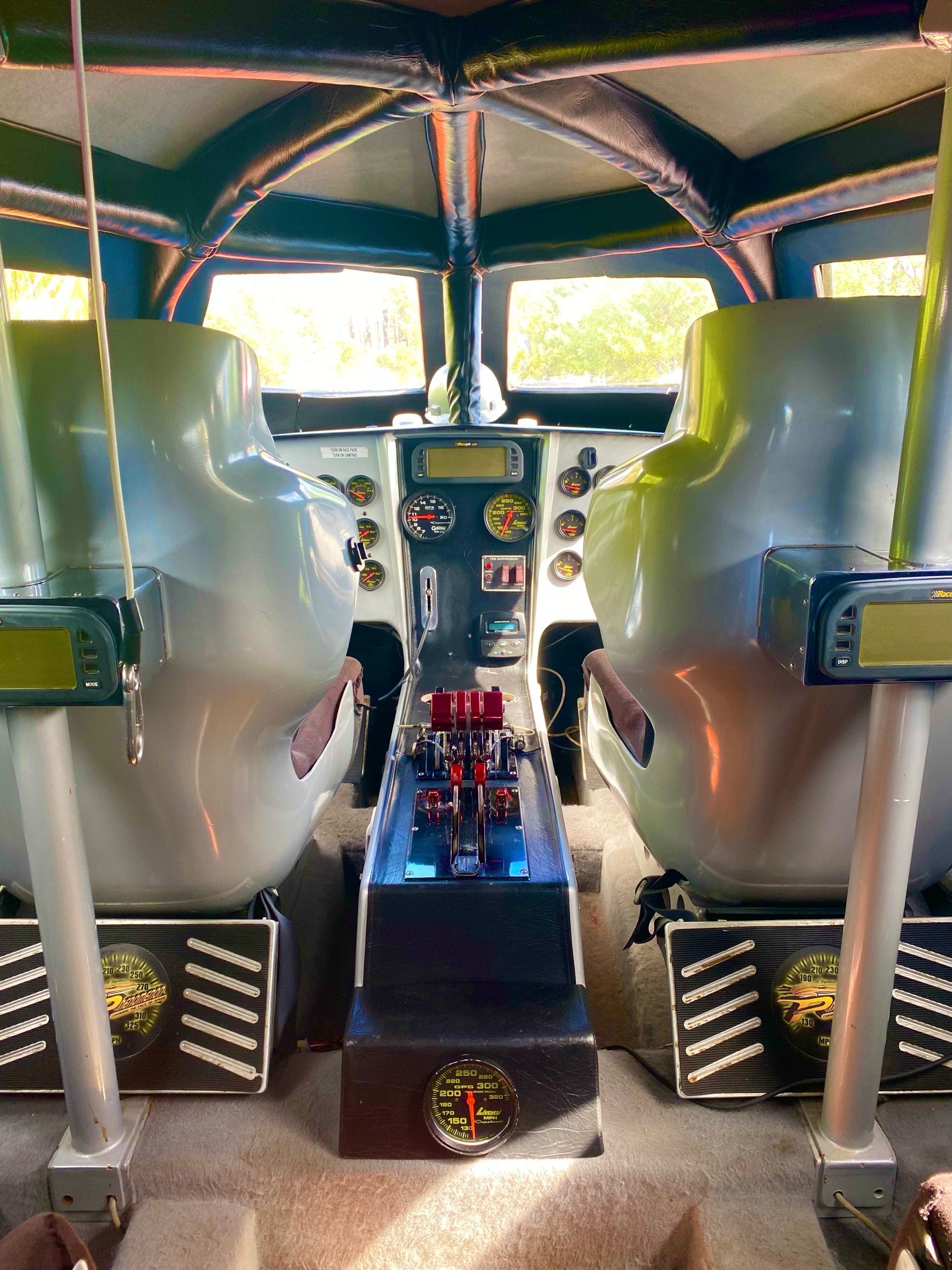 In the end, all the fixes and added safety measures bumped the weight of the boat up too much for what it was designed for. But, that was then, and this is now – Phenomenon may not be attempting any records, but Copeland’s orange and yellow kitty is in good hands and roaring again!

The phat cat sat in a prime location close to Huski Chocolate and WHM Motorsports in the heart of the dry pits surrounded by all 59 professional raceboats and their entourages. Oddly enough, for being the center of attention, after multiple attempts to find out what the future holds, minimal information was given. Perhaps it’s just too soon to tell. At this point, I established that two turbine engines are in the boat and there is a strong possibility Phenomenon may ride again.

Presently, it’s being repurposed as a Big Exotic Cat billboard at its new home with the wildlife conservation... and no doubt, did its job well luring in race fans for a peek and a picture. Green Field Reserve further enthralled visitors with a few furry and scaly friends that were on hand to share. In the future, the high-performance powerboat crowd can only hope for the same enthusiasm to be shared on the admirable aquatic cat that’s now part of the pack. For now, you can keep busy looking for the snake somewhere in the photos below, or better yet... read part one of the Phat Cat story on the arrival of the new MTI 440X, since Randy Scism is always more than happy to talk about his speedboats. 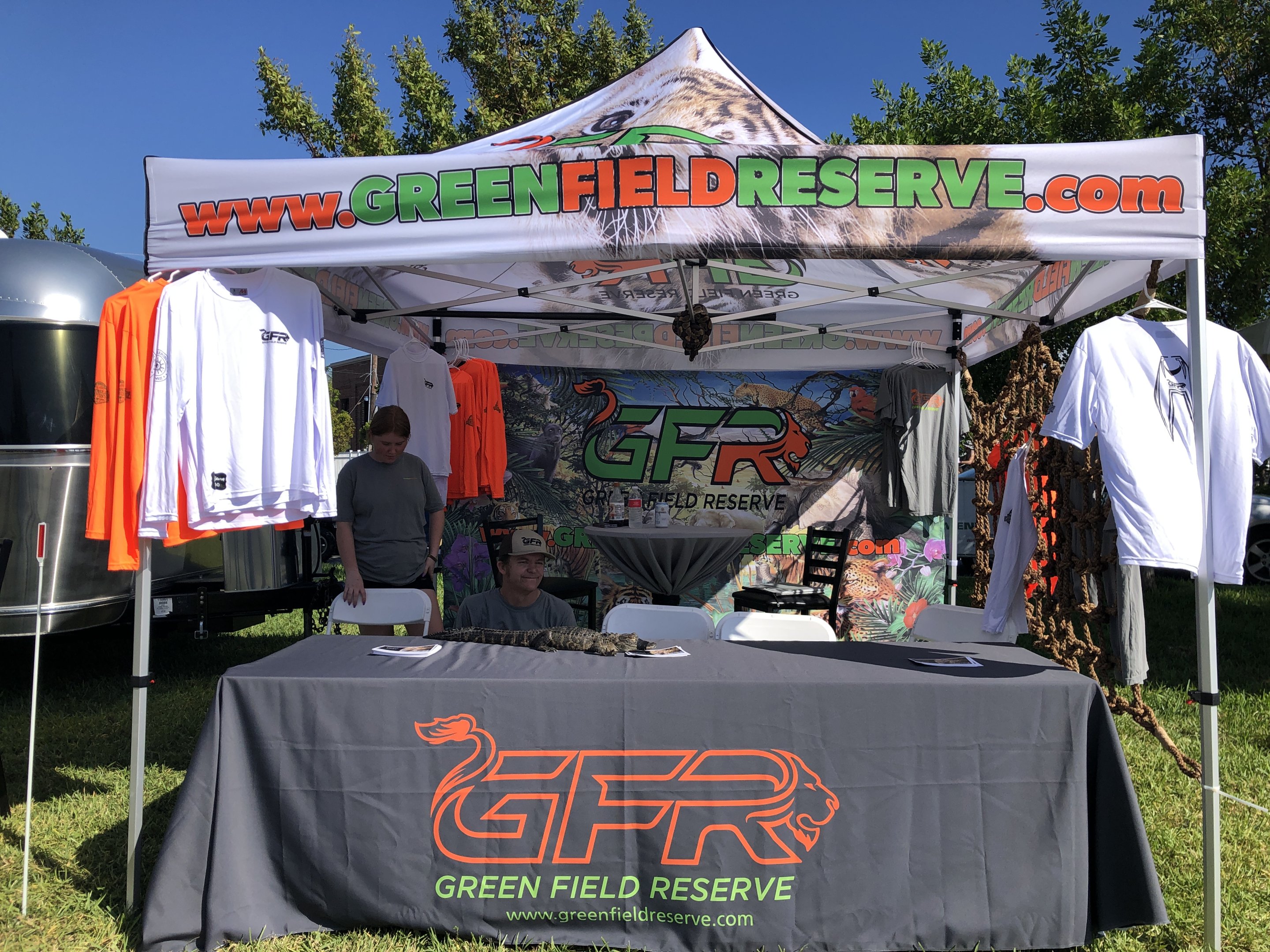 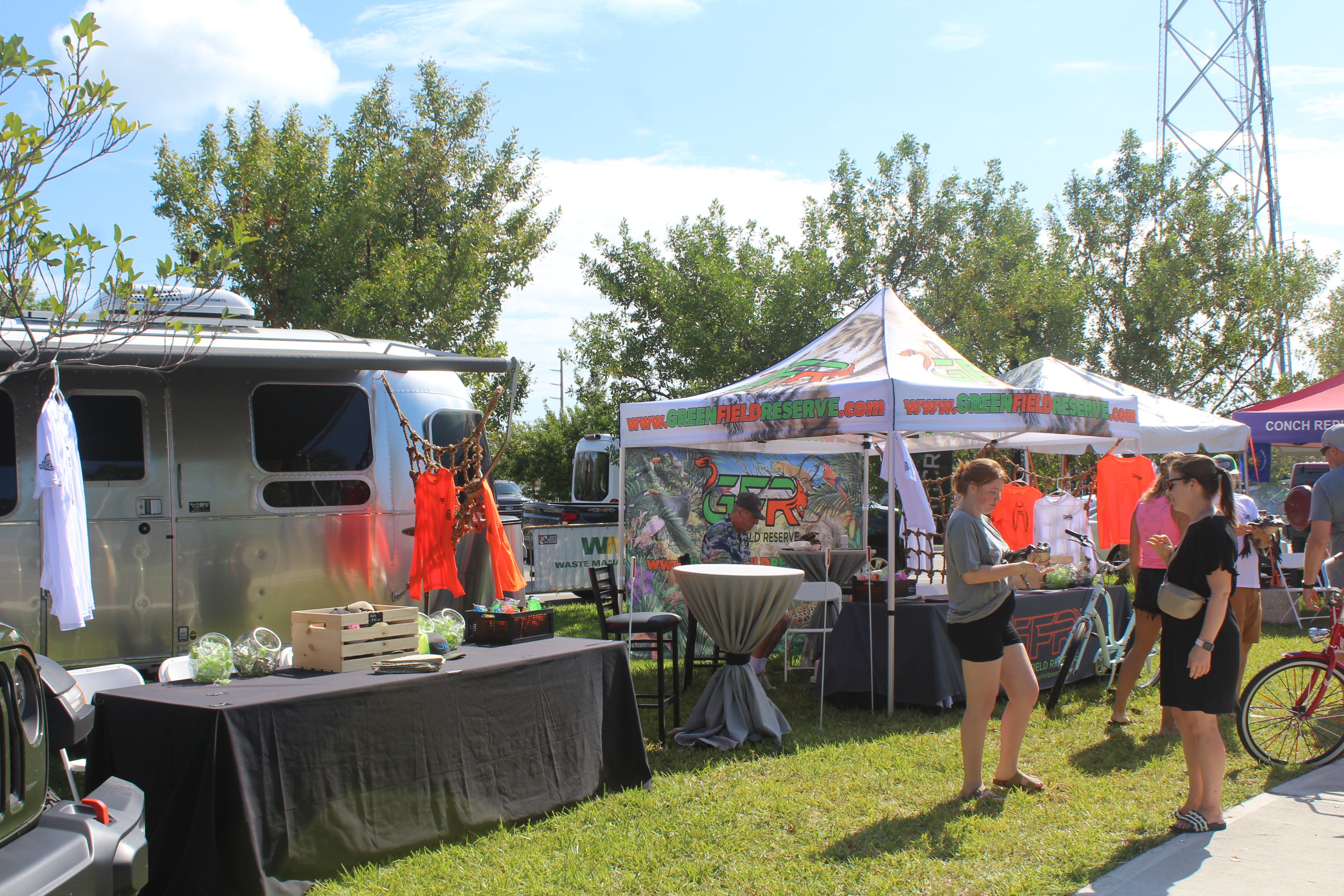 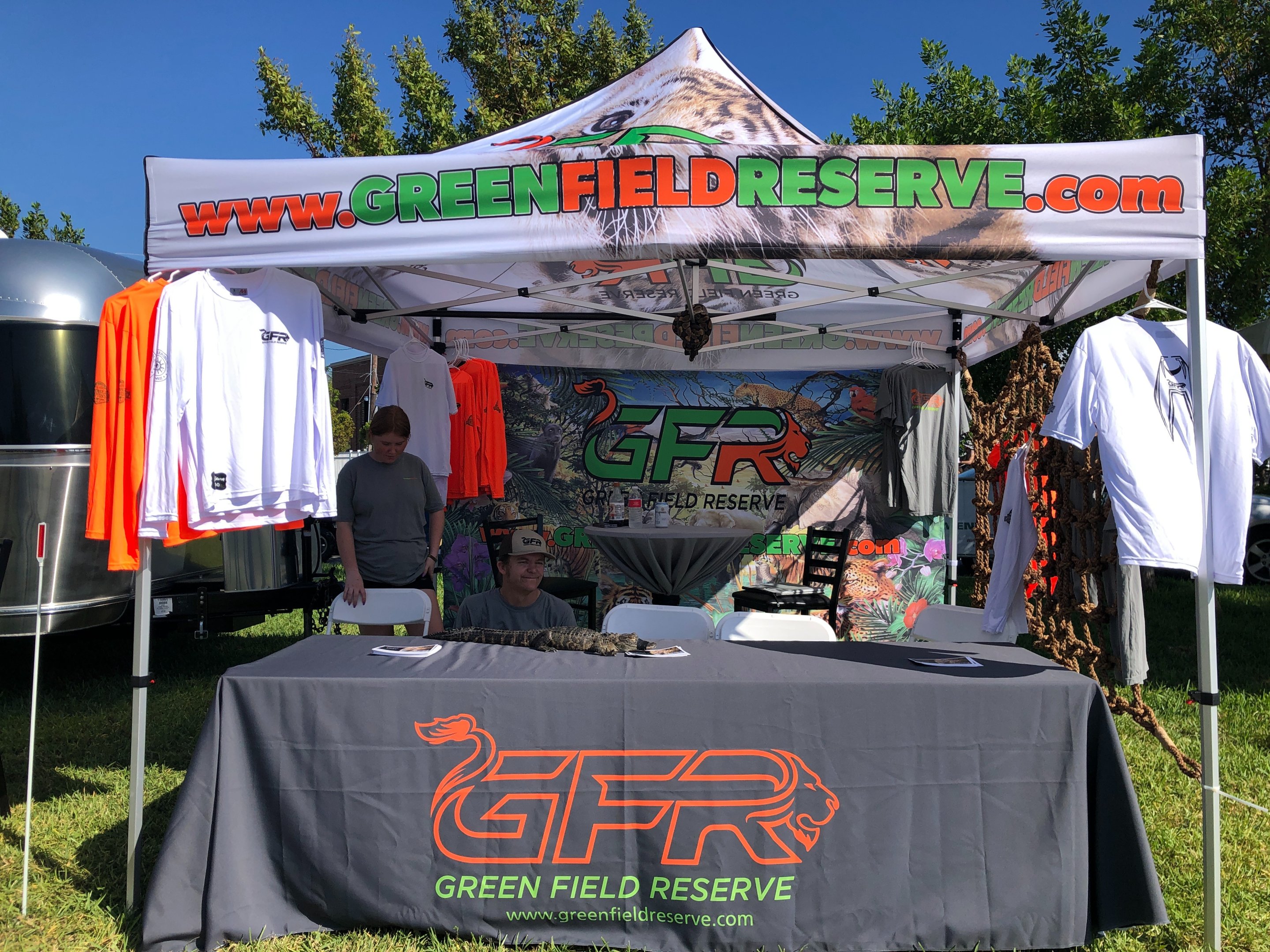 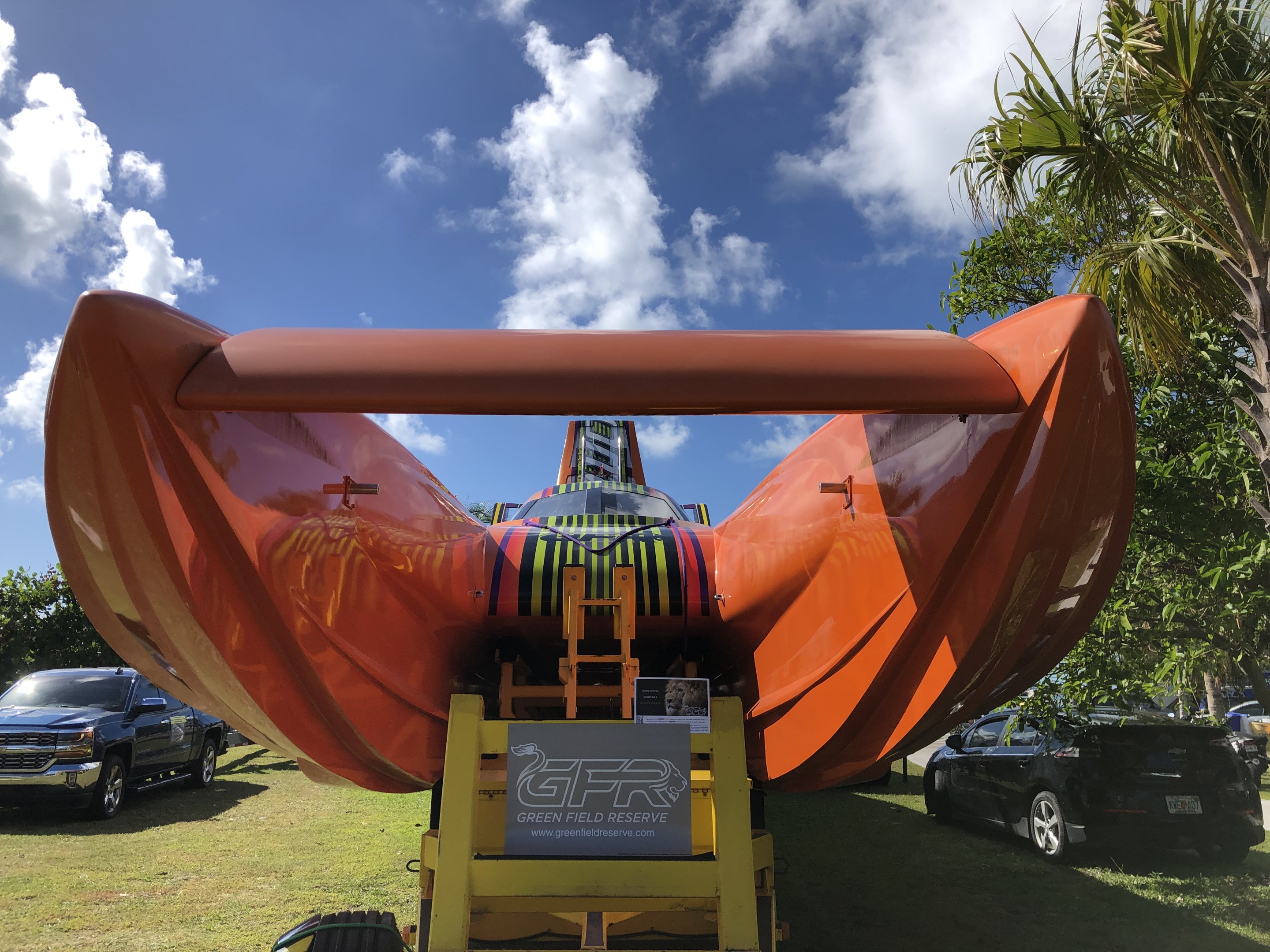 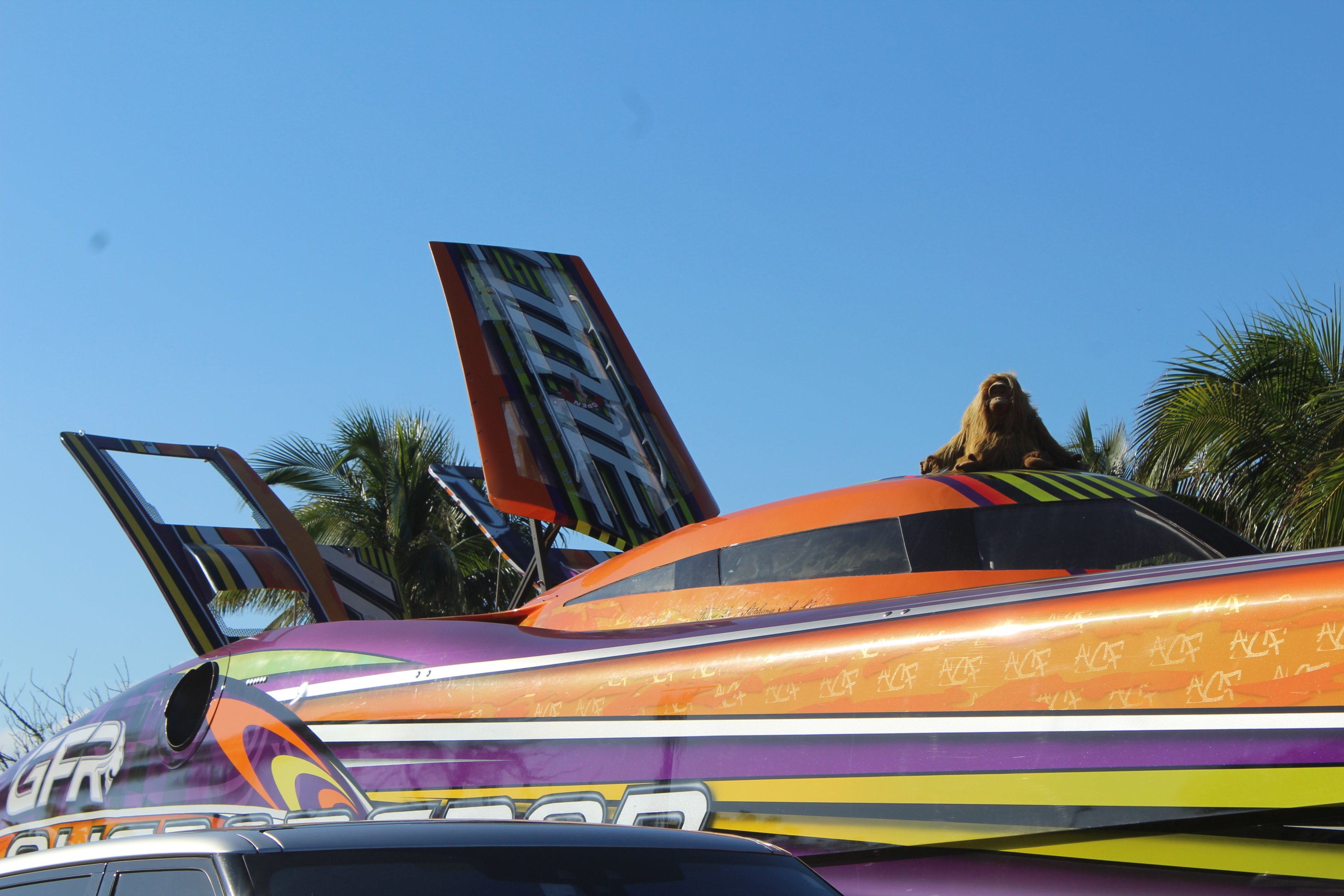