Article Gallery
Making Your Flatty Drive Like a Mercedes….It’s All In The Pedal!

It’s long been said that ‘necessity is the mother of invention.’ Nobody will argue with that, especially Denis Porter who hung out with his two flatbottoms at Lake San Antonio in central California.

Denis lived his life as one of those full-throttle kind of guys as evidenced by his lengthy medical history littered with broken bones and other assorted injuries. Whether it’s on two-wheels, four-wheels or in boats, it was an all-or-nothing kind of existence for Denis. 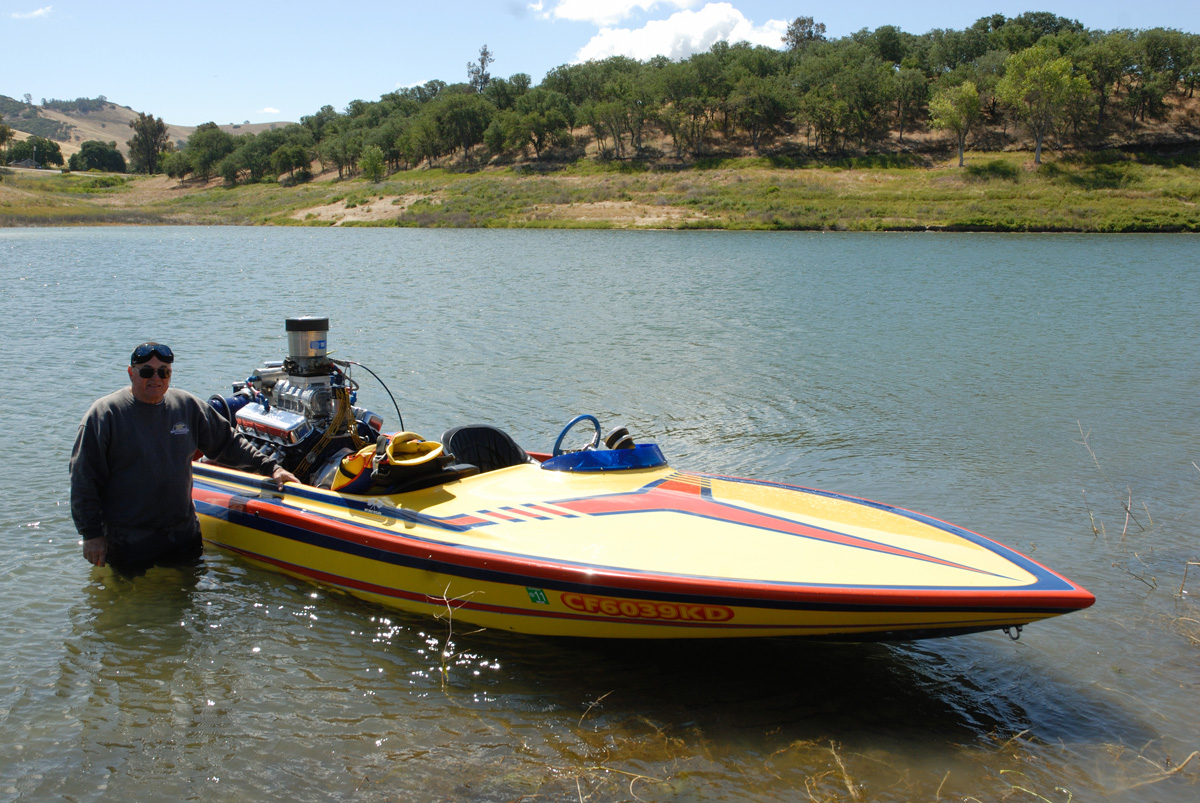 But those multiple high speed indiscretions haven’t been without consequence. Once he arrived on the plus side of sixty, Denis’ left knee didn’t work as well as it did a couple of decades ago. Although it still had some flexibility, its range of motion was noticeably limited. For most people six decades old, that might not be a big deal, but for Denis it was an ever-irritating problem because as a hard-core,, hard-charging flatbottom driver (owner of a 1979 Hondo, formerly the “Californian Shaker” drag boat, and a very nice and very fast Cole), working the all-important manual cavitation plate down-pedal was next to impossible. 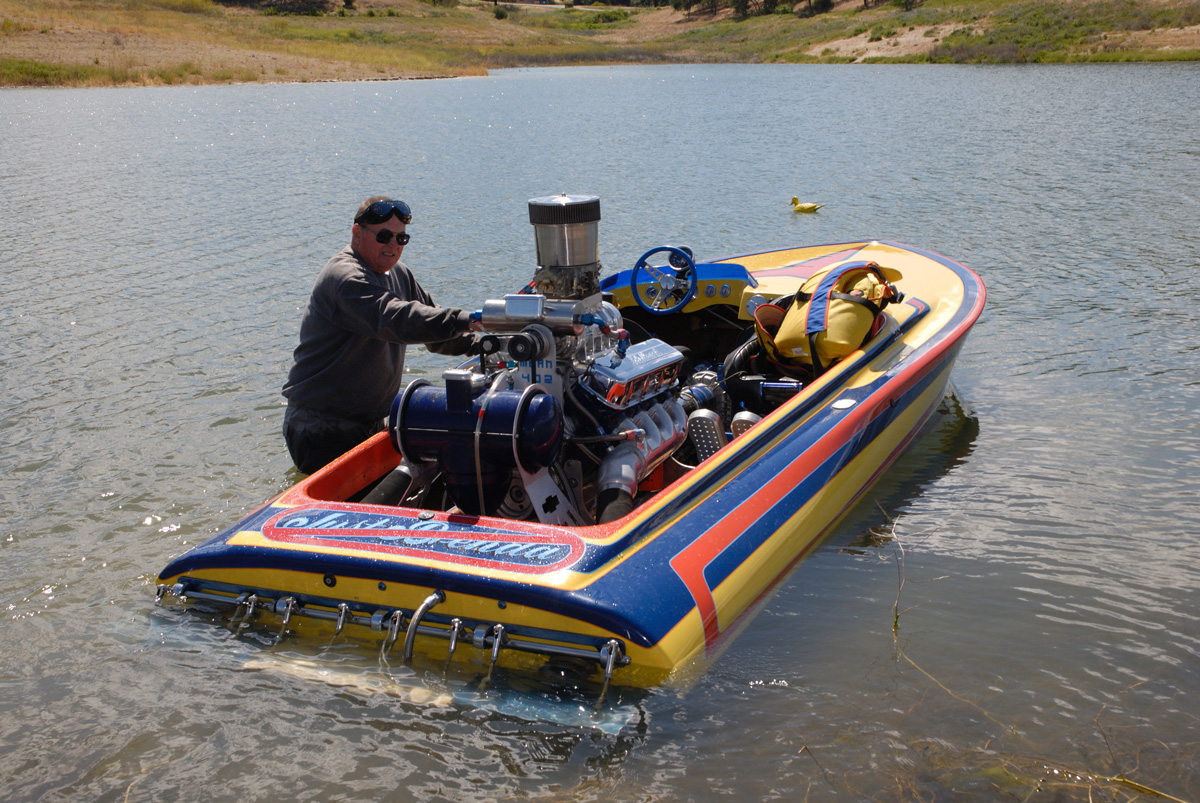 For those not familiar with conventional flatbottom down-pedals, they are simply a pedal operated over-ride mechanism that lowers the cavitation plate on the transom when the driver pushes it forward with his or her left leg/foot. What’s not apparent, however, until you sit behind the wheel of a well-horsepowered flatty is that the pedal is stiffly spring loaded requiring as much as several hundred pounds of direct human muscle pressure to make it go down
. 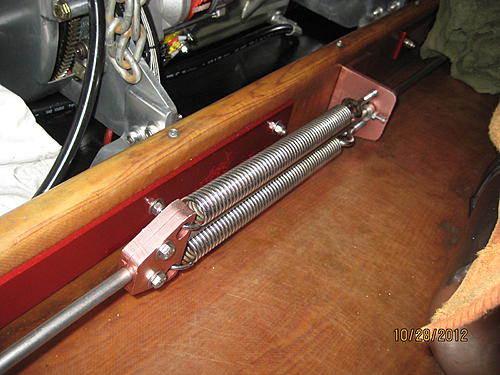 The reason you want to lower the cav plate is to keep the bow of the boat from launching skyward during hard acceleration. If you attend a drag boat race, just watch the commitment area ahead of the Christmas tree lights for a demonstration. In order to maintain control, as the driver approaches the starting line, they’ll apply pressure to the down pedal lowering the cav plate which in turn lifts the transom and lowers the bow. If done correctly in just the right amount, when the light turns green the driver can hammer the throttle and still control the boat with a low bow angle of attack. Then as the boat accelerates, the driver feathers out of the down-pedal allowing the boat to free-up and take its optimum set for max speed. Sounds simple, until you try to do it, especially with a bum knee
. 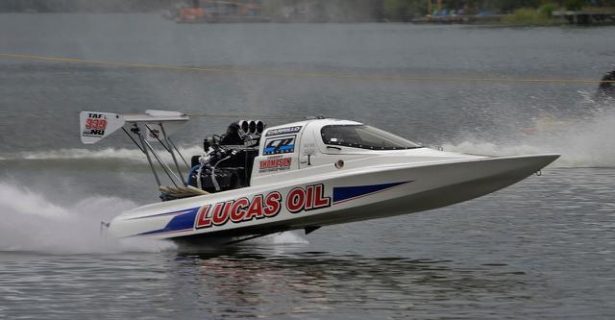 “If I push hard enough on a conventional down-pedal when I’m driving, I’m afraid I’ll pop my hip out of joint,” said Denis. “I knew there had to be a better way and I was determined to find it.”

Fortunately for Denis, he’s a master machinist, someone who thinks nothing of taking a block of billet aluminum and milling it into some exotic shape of his own design. “I’ve got a 5,000 square foot workshop/warehouse on my property with plenty of CNC equipment to do just about anything I want,” remarked Denis. “My company was Machine Automation Systems (MAS) which specializes in the rebuilding and repair of industrial machinery. So taking on a simple project like making a better down-pedal system for a flatbottom didn’t seem that difficult.” 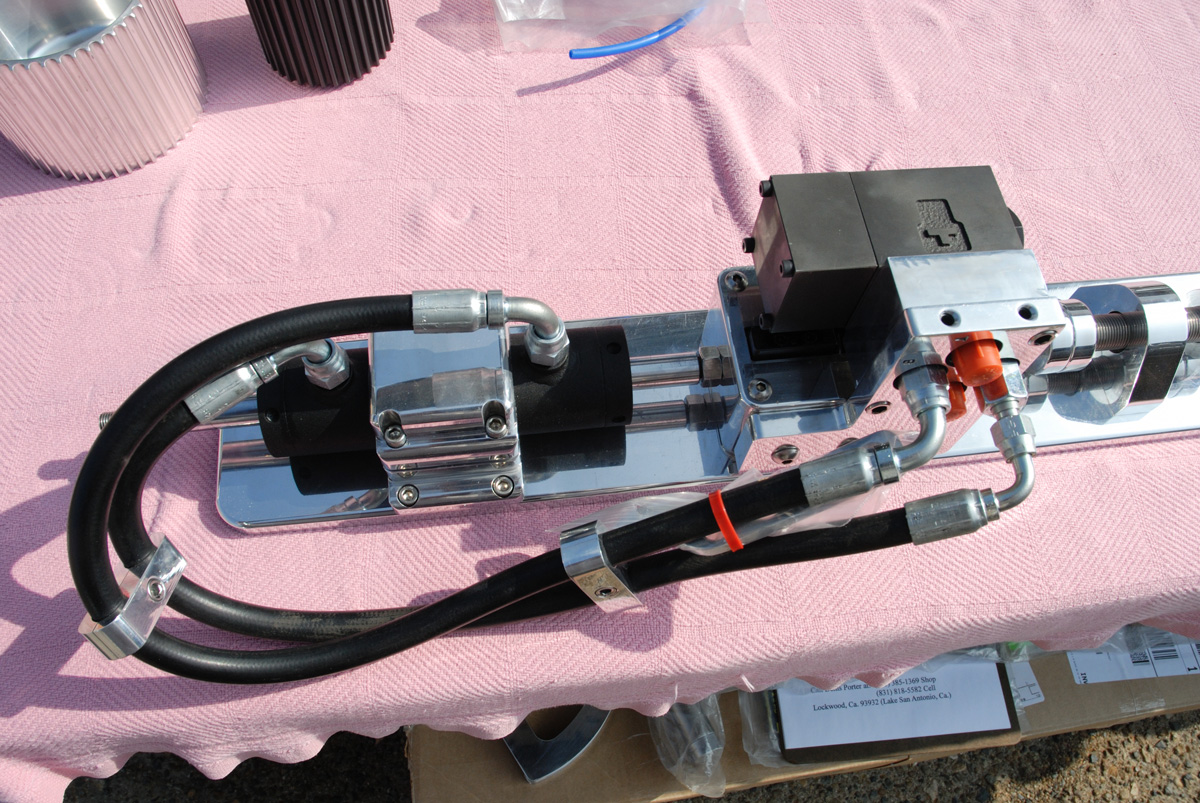 To achieve what he was looking for in the way of a power-assisted down-pedal, Denis was certain that hydraulic actuation was going to be the answer. “I wanted something that would be fast reacting, completely adjustable, and have a huge fail-safe margin. It should be the last thing in the boat you ever have to worry about.” 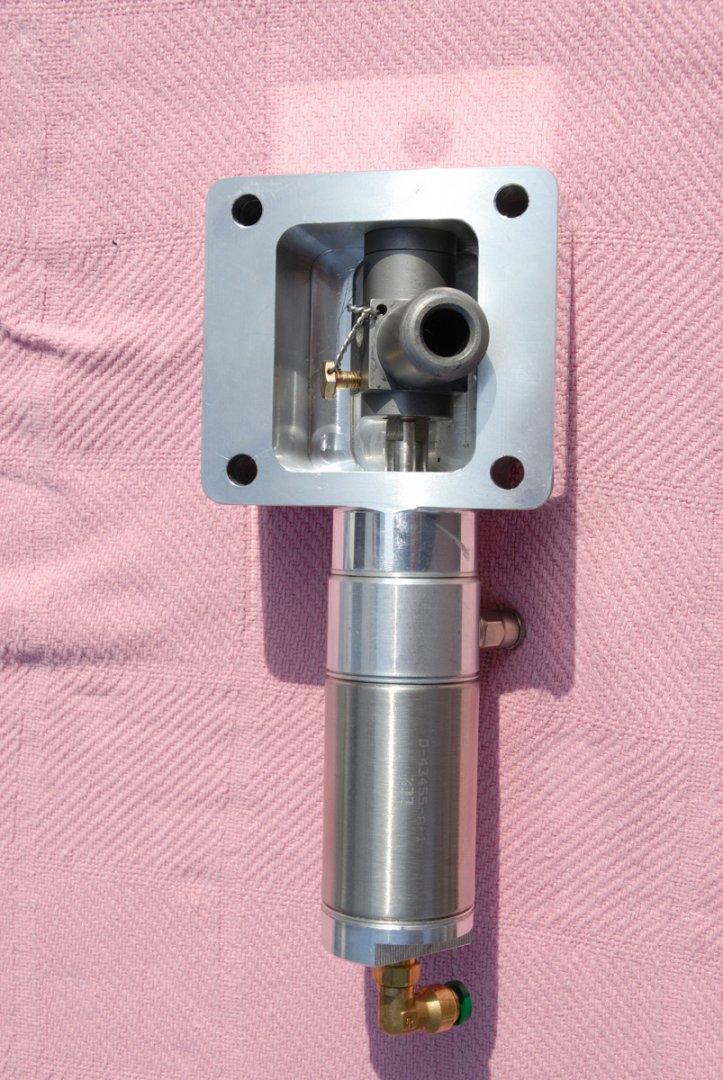 While this article could easily evolve into a technical dissertation about hydraulics, fluid dynamics and the intricacies of CNC machining, that’s perhaps a discussion best left to another time. Suffice it to say, Denis was successful in building a first prototype and installed it in his Hondo. “I took the boat up to one of the Camp Far West rendezvous and just let people drive the boat and give me their honest feedback. I knew it worked for me, but I was curious to know if other flatbottom drivers appreciated it like I did.”

At the end of the weekend, Denis reported a unanimous thumbs up from everyone who took a turn in the driver’s seat. “They were more complimentary than I even expected,” said Denis. “I don’t think there was one complaint. I was pretty sure I was on to something.” 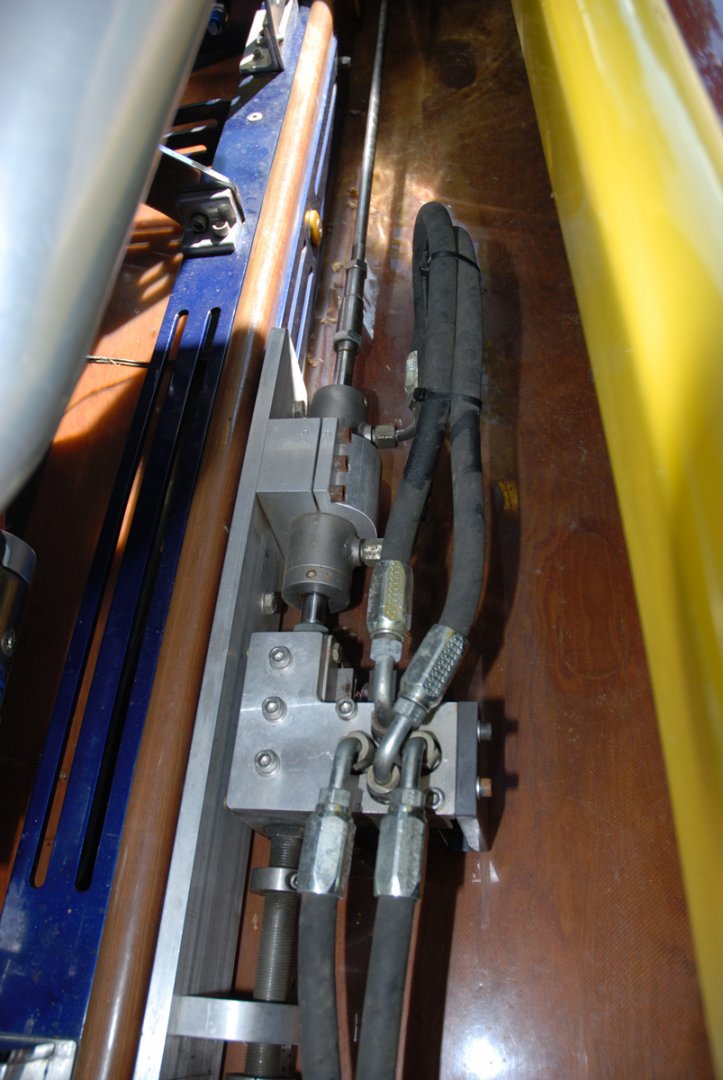 Denis’ invention works like this. The super heavy-duty spring that delivers the necessary tension for a conventional down-pedal is eliminated entirely. Instead, there’s a directional control valve that tells the hydraulic cylinder how much to move based upon how far the pedal is depressed. Basically, the control valve follows what the pedal does. Denis’ system uses a low volume pump that can be driven off the engine or V-drive via a belt or gear set. The reason for the low volume pump is that it encourages a faster and more consistent reaction and feel on the pedal. 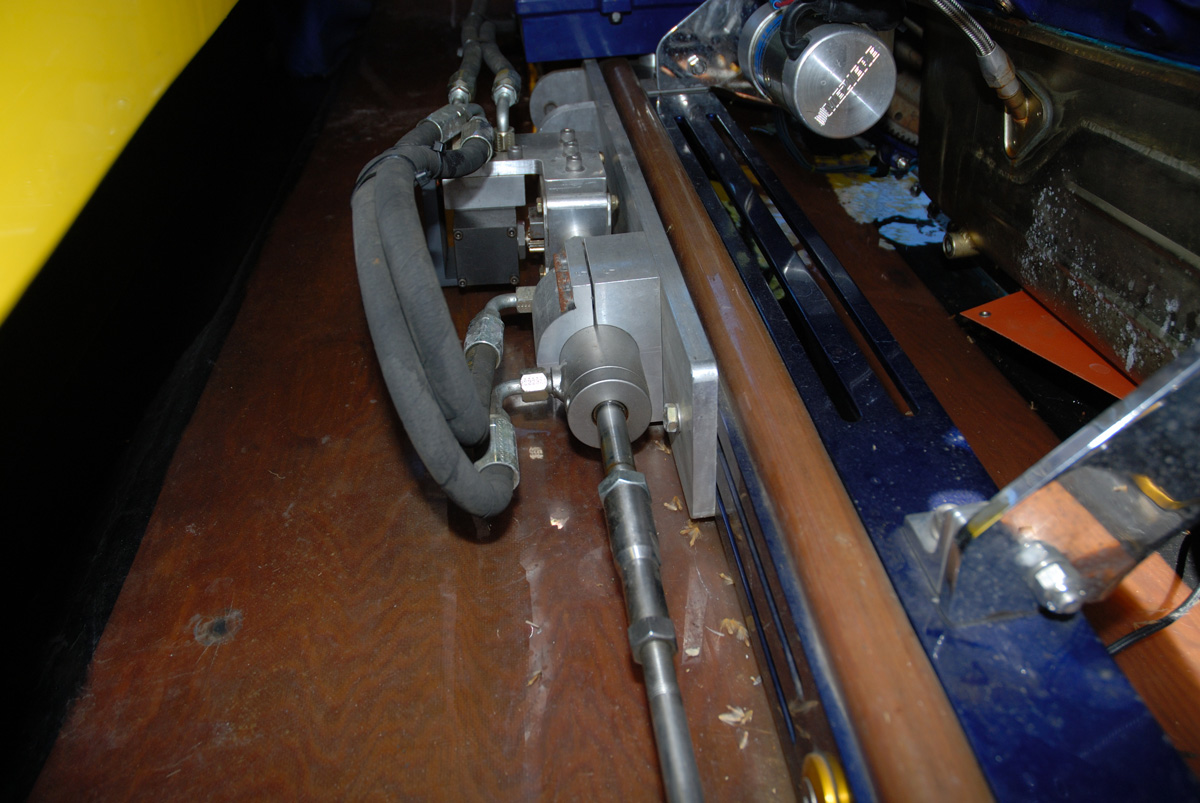 “About 90% of the effort to move the pedal is taken over by the hydraulics,” said Denis. “The pedal still feels normal, but it will simply depress and lower the plate with only a fraction of the previously needed muscle-power. In actuality, the system works quicker than you can move your leg or foot. It’s just that responsive. And if you take your foot off the pedal for any reason, it naturally returns to its original position.” 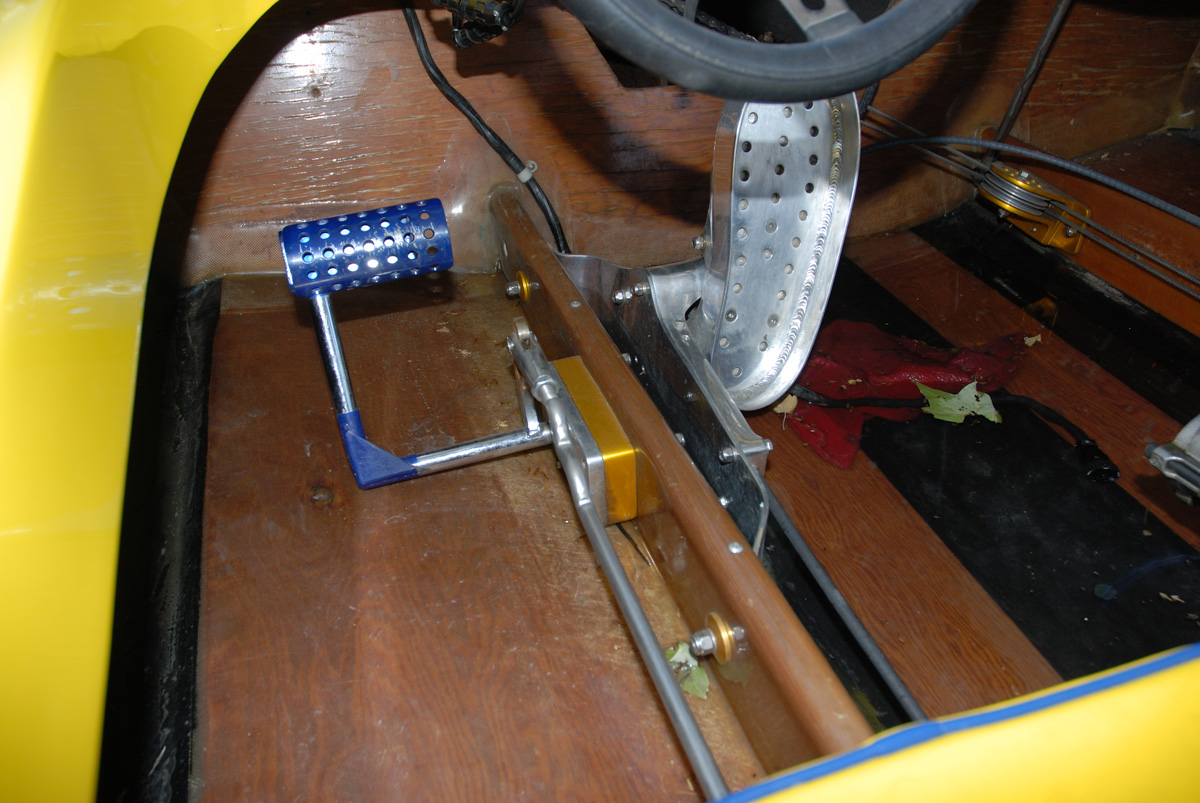 An additional feature of the system is that once your cavitation plate is set exactly where you want it with the external turnbuckles, you never have to touch it again when you want to make a slight adjustment. That can be done inside the boat by simply loosening the jam nut on the control rod and moving it forward or back depending on what adjustment is needed. There are also some people who have expressed concern about what will happen if the hydraulic pump fails and the unit is no longer assisted. In essence, it’s just like the power brakes on your car. If the power brake pump stop working, you still have brakes, but you just have to push down a little harder.

According to Denis and those who have driven the prototype, the hydraulic down-pedal can’t help but make a flatty pilot drive better, with more consistent and faster ETs and hopefully higher top speeds You can’t ask for much more than that.

“Without this hydraulic down-pedal, I think my flatbottom driving days would probably have been over,” said Denis. “That wouldn’t have made me happy. Now I just have to worry about not having any more of my body parts go bad and I should be enjoying myself and my boats a whole lot more.”

Editor’s Note: approximately a year after this story was written, Denis reportedly struck an underwater obstruction or a sandbar while driving his Hondo flatty on Lake San Antonio at a high rate of speed and was fatally injured. Our condolences to his family, many friends and members of the V-Drive Outlaws. Hopefully his ‘power pedal’ will continue to be available at specialized V-drive shops for hot boaters.
Reactions: Gripside80, DC-88, Dkahnjob and 1 other person