Ten months ago Wayne Monasmith purchased Rons Custom Detail and things have been on a fast trek for the local Havasu based detail company ever since! Ron's Custom Detail already had a reputation for being one of the premier detail shops under the watchful eye of previous owner Ron Burnett. I have spoken with Ron and I asked him why he sold the business and he simply said "It was time to move on, I want to focus all of my efforts on the stereo shop and the new gel coat shop." Both shops we will follow up on in a subsequent article.

So what has changed since the torch has passed hands? Plenty! With new blood comes new vigor. Wayne a long time boater and former owner if an Ilmore powered DCB F32 knows all about what it takes to maintain an "exotic." He has a passion for boats and custom hardware and that passion has trickled down through the staff of RCD. Morale is at an all time high, and not only the quality of work, but the quantity of work going through Ron's Custom Detail is showing it.

Now you could say, "Detailing is Detailing Dave.." and I would've said the same thing and even did once to Wayne. However that is simply not the case. Wayne has actually brought with him a few "tips and tricks" but most importantly "technology." As a lot of you know Ron's does a lot of my detail work already, I never really asked how they do it or what they used, I was just happy with the results. I'm going to get side tracked here for one minute and tell you a relevant story to the "technology" and "mentality" that Wayne brings to the table. 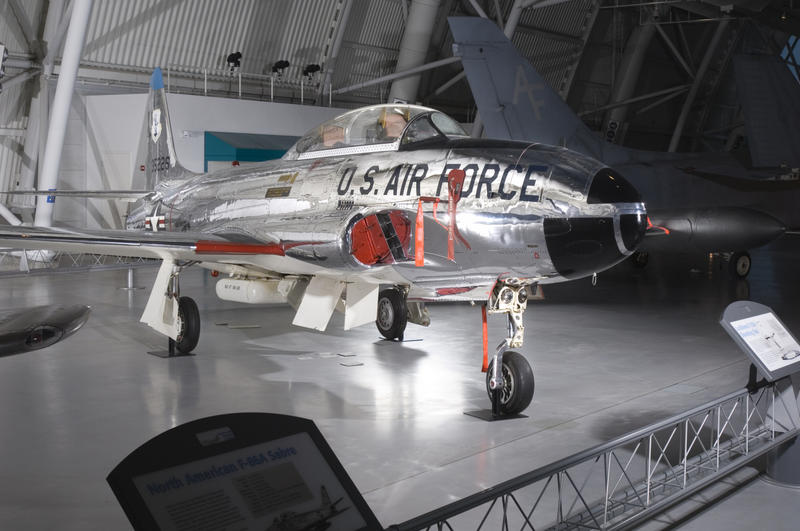 Recently there was an unfortunate "incident" with the ingredients of :
A Buffer
Some compound
A Set of Stainless Fenders
Me thinking I'm way cooler then I am... 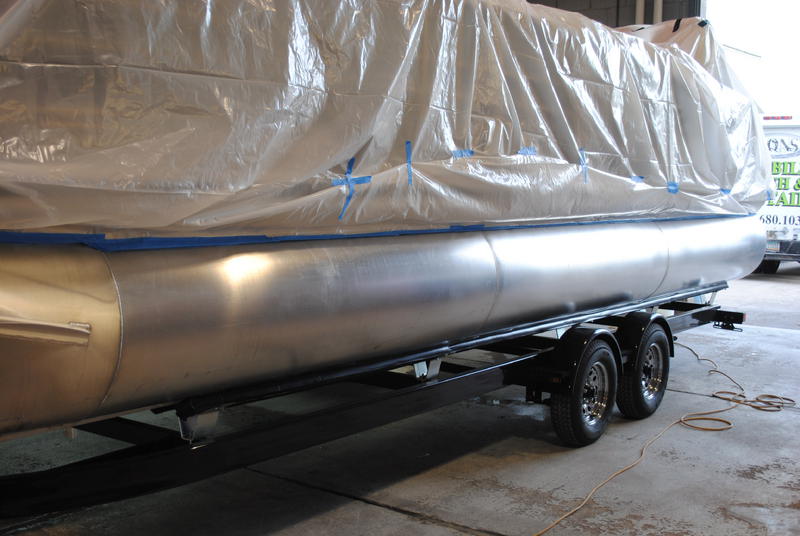 When I finished with them they looked amazing in the garage and I was beaming like a proud new parent who's kid just hit a home run. The next day I pulled the boat out of the garage and into the sunlight and I found out that my "home run" proud moment was actually a "swing and a miss." I could see it in the rear view mirror before I even got out of the truck. I swirled the hell out of these things.. I asked Wayne if who in town could re-polish my fenders, and wasn't really looking forward to pulling them off the trailer and taking the fender pads off etc.. 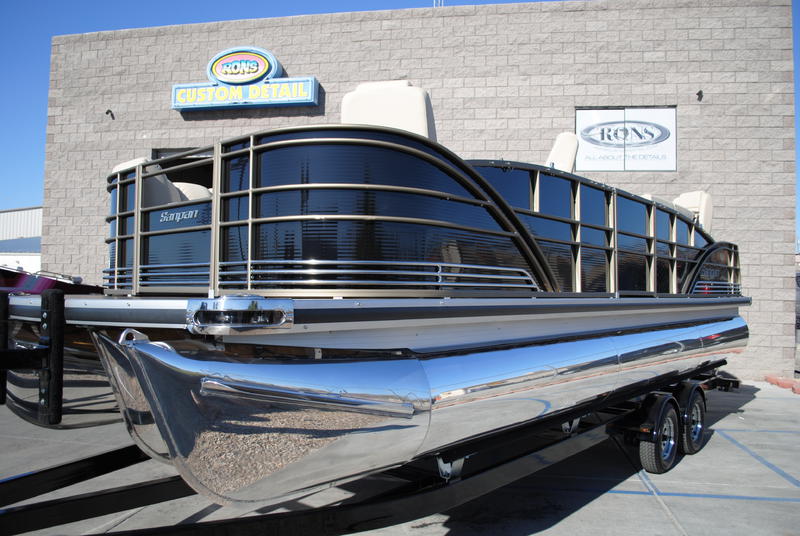 Wayne said "we can handle that for you Dave, no problem." I asked "What do you use a buffer and some compound?" hoping to reveal the error of my ways, and he said "Actually we use a process from the Smithsonian Museum. It's the same machine and process they use to restore and maintain polished aircraft." 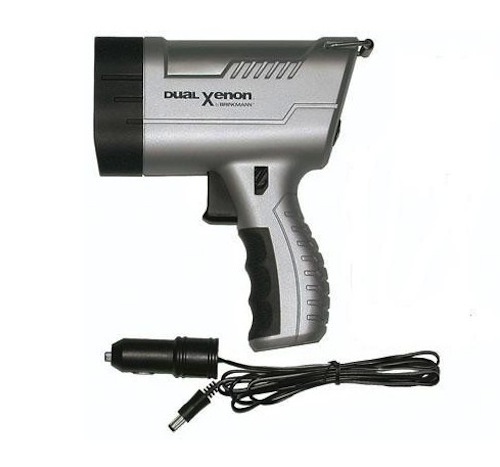 It was at that point I pretty much realized I'm not dealing with an average car wash guy here, this guy is some kind of "detalero" which is my made up word of the week for detailer / super hero with a spanish sounding twist for cool factor. After we entered that conversation he proceeded to educate me in the ways of 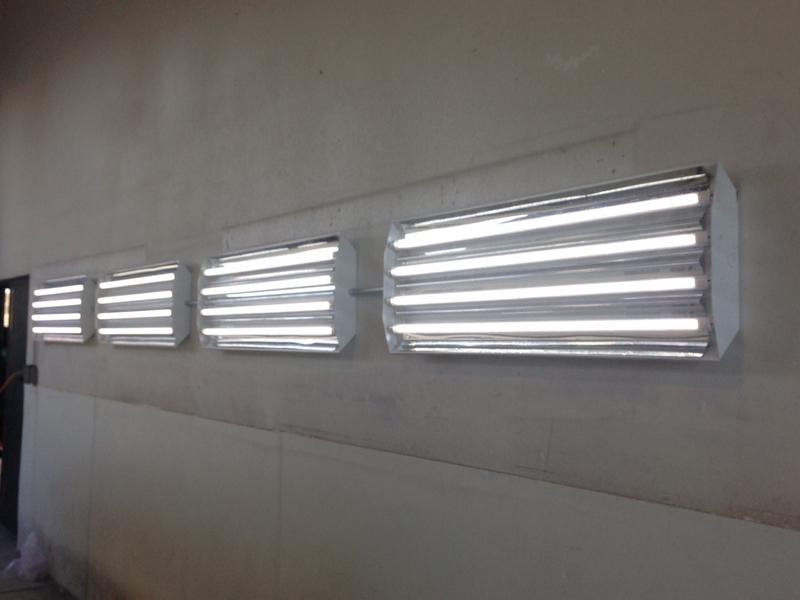 dual xenon lights to see swirls and water spots in paint that are barely visible to the human eye, and the 3500.00 worth of LED's he just installed in the shop for better lighting so the guys can better see what they are doing. Cool little side note the LED's on the walls are actually adjustable so there's no shadows when they are polishing a car or a boat.

Now that we have covered a few of the "tips and tricks" (by that I mean there is more, but Wayne wasn't to hip to the idea of me putting them online for everyone else in the world to see) I'd like to talk about what I meant by "New Territories." While it might seem foreign to a lot of our East Coast and Mid West members (which the #'s in those markets are growing everyday), out here on the West Coast how good the trailer looks is almost as important as how good the boat looks. Die Hard boaters on the west coast view the trailer as part of the overall package, and it's not uncommon to see triple axles under 21' boats, and rims that are worth as much as some go fast outboard boats. This concept was not lost on Wayne, but rather embraced. The trailer is one of the things that takes the most beating from road rash, to corrosion, bunk repairs and in some cases just being outdated. 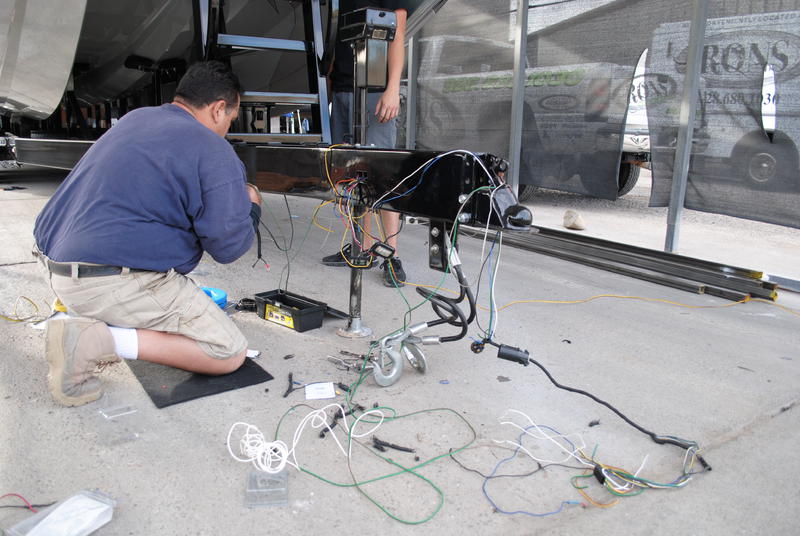 Wayne hired Frank Basulto, formerly of Zeiman & Extreme Trailers, and setup a complete maintenance, fabrication and repair shop! With 15 years experience Frank can handle just about anything you bring there way just short of building a brand new trailer. Actually he can even build you a new trailer, but that's not an area that they are looking to branch out into... Yet.. Ron's Custom Detail can now go through and update your trailer, which would include things like replacing those old Ovals with the new style long LED's and recessing them, changing the look of the trailer by cutting off those four foot long steps and putting on a modern looking step, rewiring the trailer and ditching the old round 4 pin connector on the tounge and hard wiring in a flat 4, 5 or even round 5 or 7 connector. Etc.. The options are limitless. From a simple re-bunk to a complete paint job they can do it. 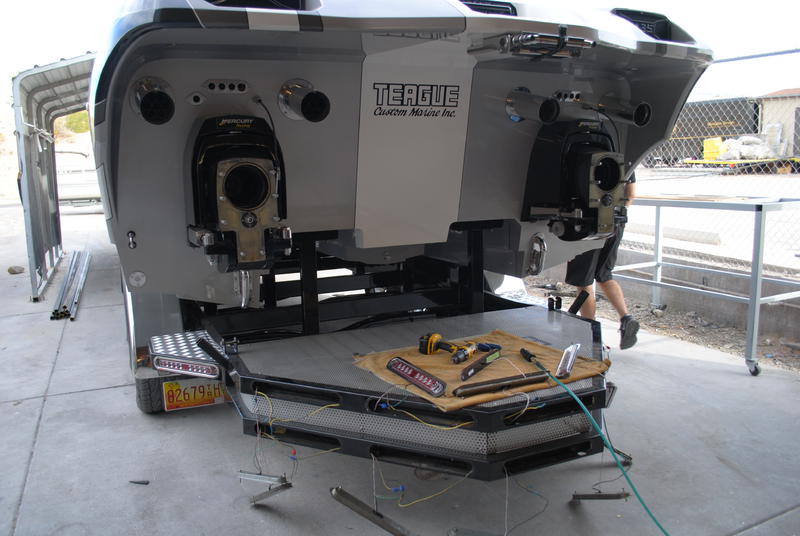 One of the most important things that I can tell you about this is you can drop the boat and trailer off, and Ron's is the only place in Havasu that I'm aware of that has the A Frames on site to lift the boat, perform the work, and put the boat back on the trailer. With everyone else you would have to put the boat in the water and hope the work is done by the time you get off the lake. In the instance of a bunk replacement if you still did want to go boating on the day of repairs, have no fear, they will head down to the launch ramp and pick your trailer up, perform the work and get you taken care of.

For obvious reasons of Frank's previous employment they are an authorized warranty center for Zeiman & Extreme Trailers!

I have included below a few before, during and afters of some projects that they completed already and I look forward to watching more of the work coming out of the shop both on the detail side, and the trailer repair side.

For more information give them a call at 928-680-1030 or you can visit the website at www.ronscustomdetail.com.
If this is your first experience with RCD since Wayne took it over mention RDP and get a 10% discount! 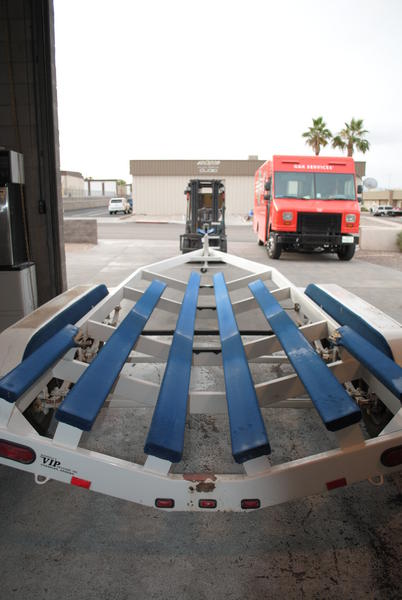 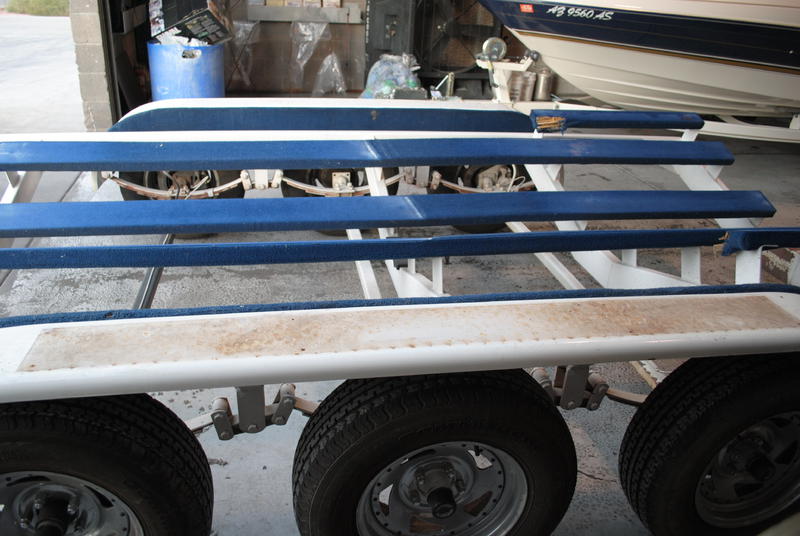 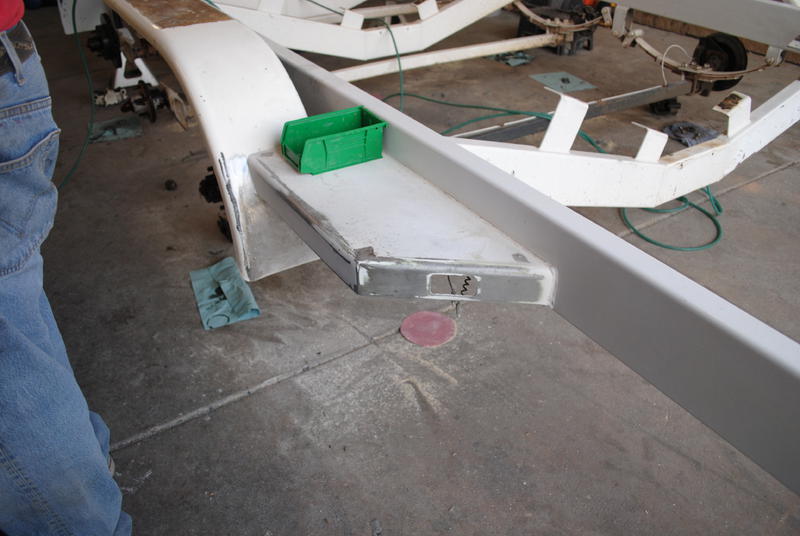 After Pics will be in the 1st comment. I'm struggling with this software right now.

After Pics of VIP Trailer