Article Reviews (1) Gallery
For those of us who don’t have six-figures to invest in a boat – you can still have something to be proud of at the lake or river.

Who doesn’t like a nice cool root beer float on a hot summer day? No, I’m not necessarily talking about the kind you pour from a Dad’s Root Beer can or bottle into a frosty mug filled with vanilla ice cream. There’s a better idea. How about a really sharp looking 1977 Hallett 18 Mini-Cruiser jet instead? This vintage beauty is definitely more refreshing on a particularly warm July or August weekend at your favorite lake or river retreat than a trip to your local A&W stand. 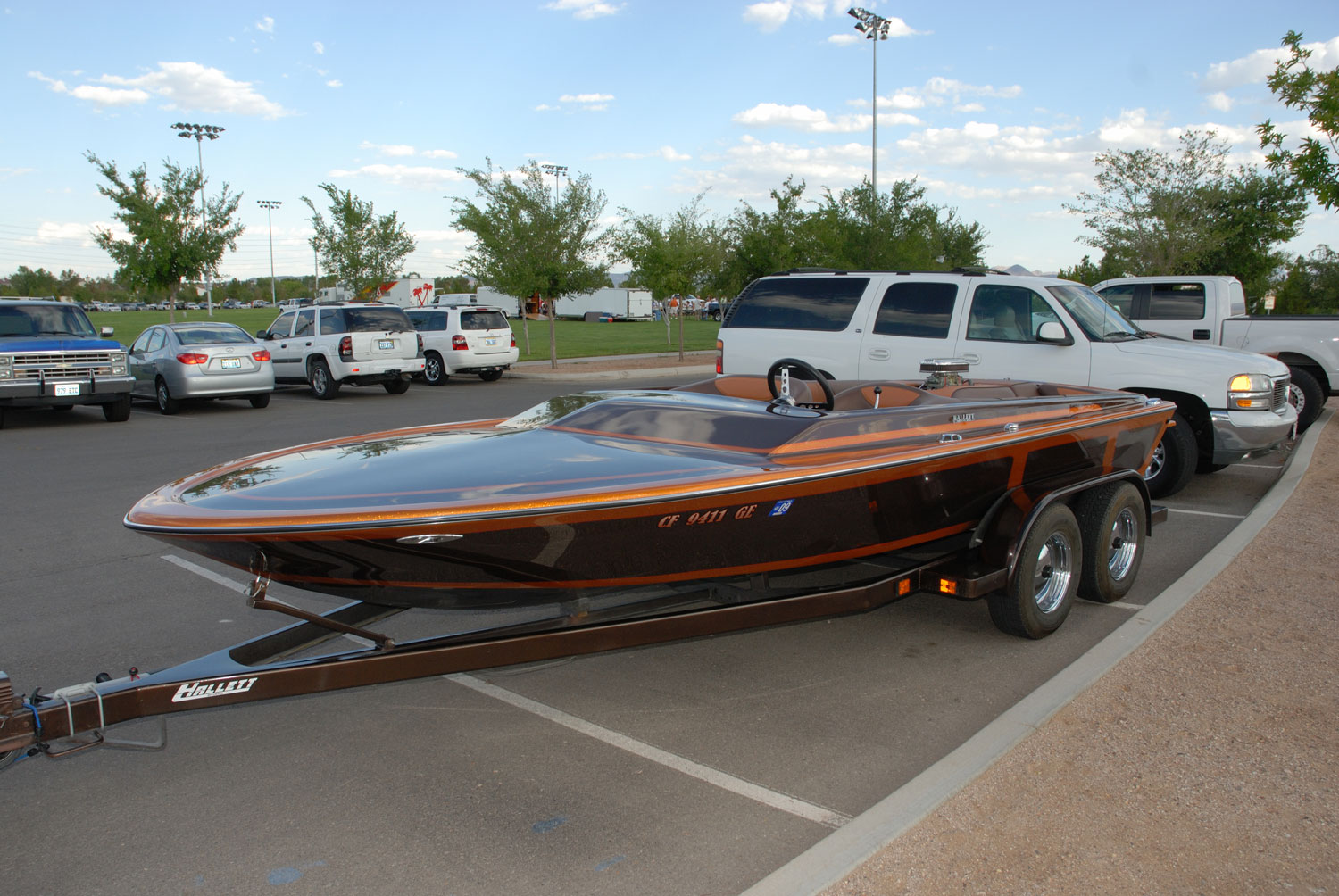 Certainly Dave Demek of Lancaster, California thinks so. He’s been the proud owner of this jet boat classic since 2001. “I saw the boat advertised in the Boat Trader and I just had to see it,” said Dave. “I’d been thinking about getting back into boating for a while and I knew Hallett builds a solid boat.”

Upon initial inspection, Dave instantly realized he had found a gem. The boat, motor, pump and trailer all appeared to be in fairly good shape and there was only 149 hours showing on the hour meter. “It looked good to me and had what I wanted, a Berkeley pump, a 454 c.i. big block Chevy and the price was right, only $5,700 including a pretty nice tandem axle trailer. After doing a little investigating, I found out I was going to be the fourth owner.” 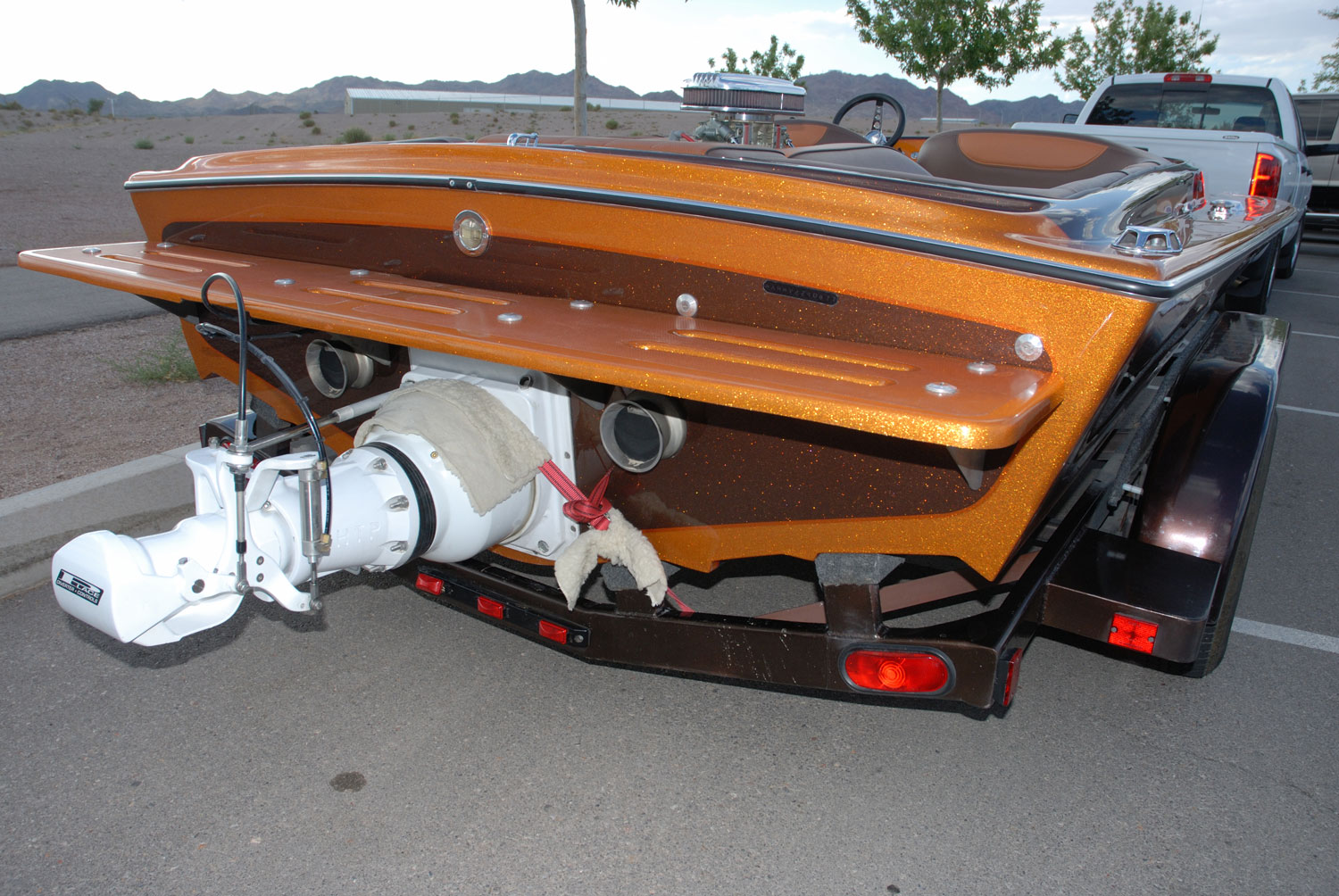 Once Dave got the boat home, he started making plans to freshen things up. He got Scott Bouchie to do a basic pump overhaul/rebuild that included a custom billet stuffer plate, extended straight snoot nozzle and an aluminum “A” impeller. Dave also didn’t think the existing naugahyde seats and deep-shag carpet motif was going to suit him so he had Adam Soares of CG Customs in Manteca, California come up with a new upholstery plan. 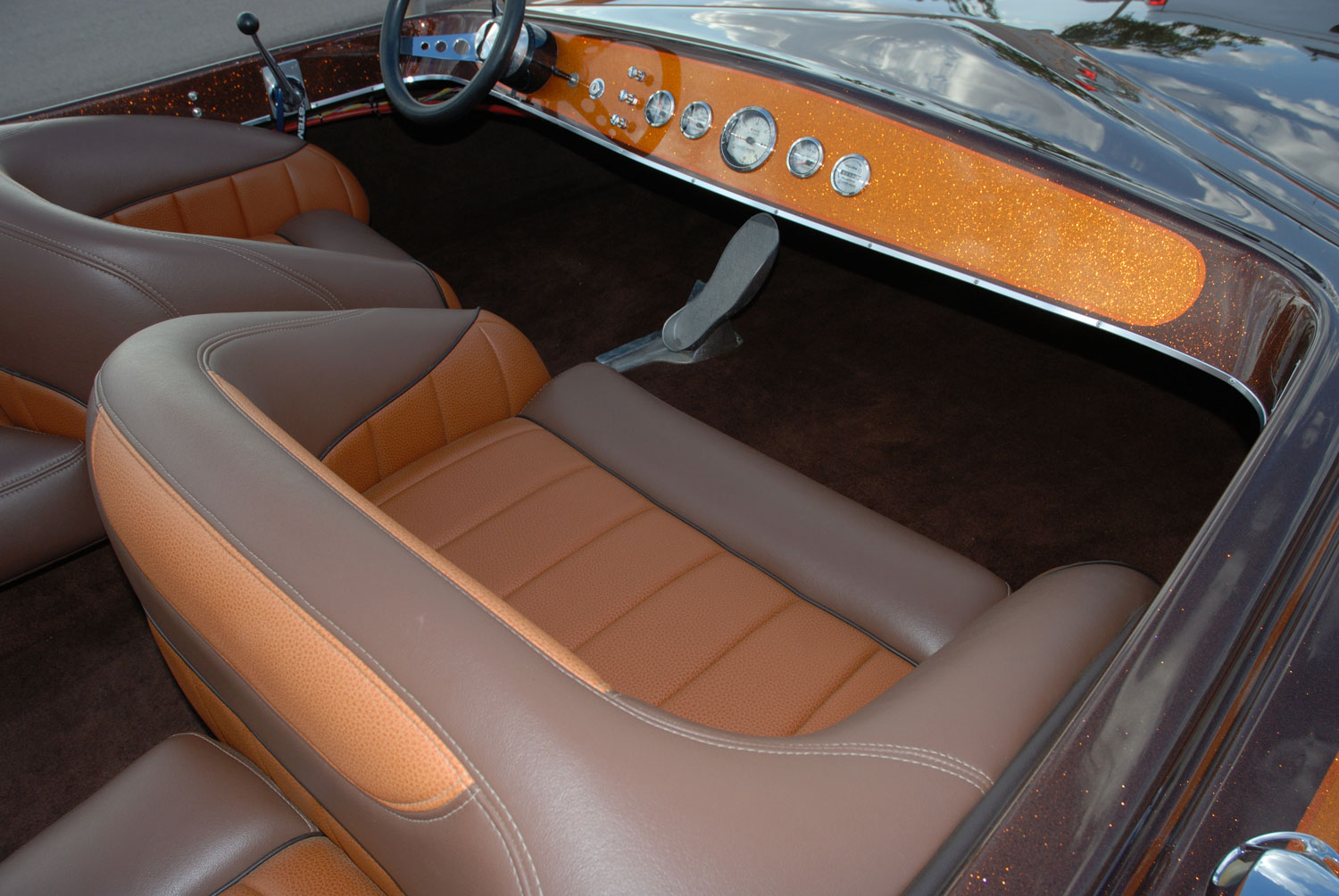 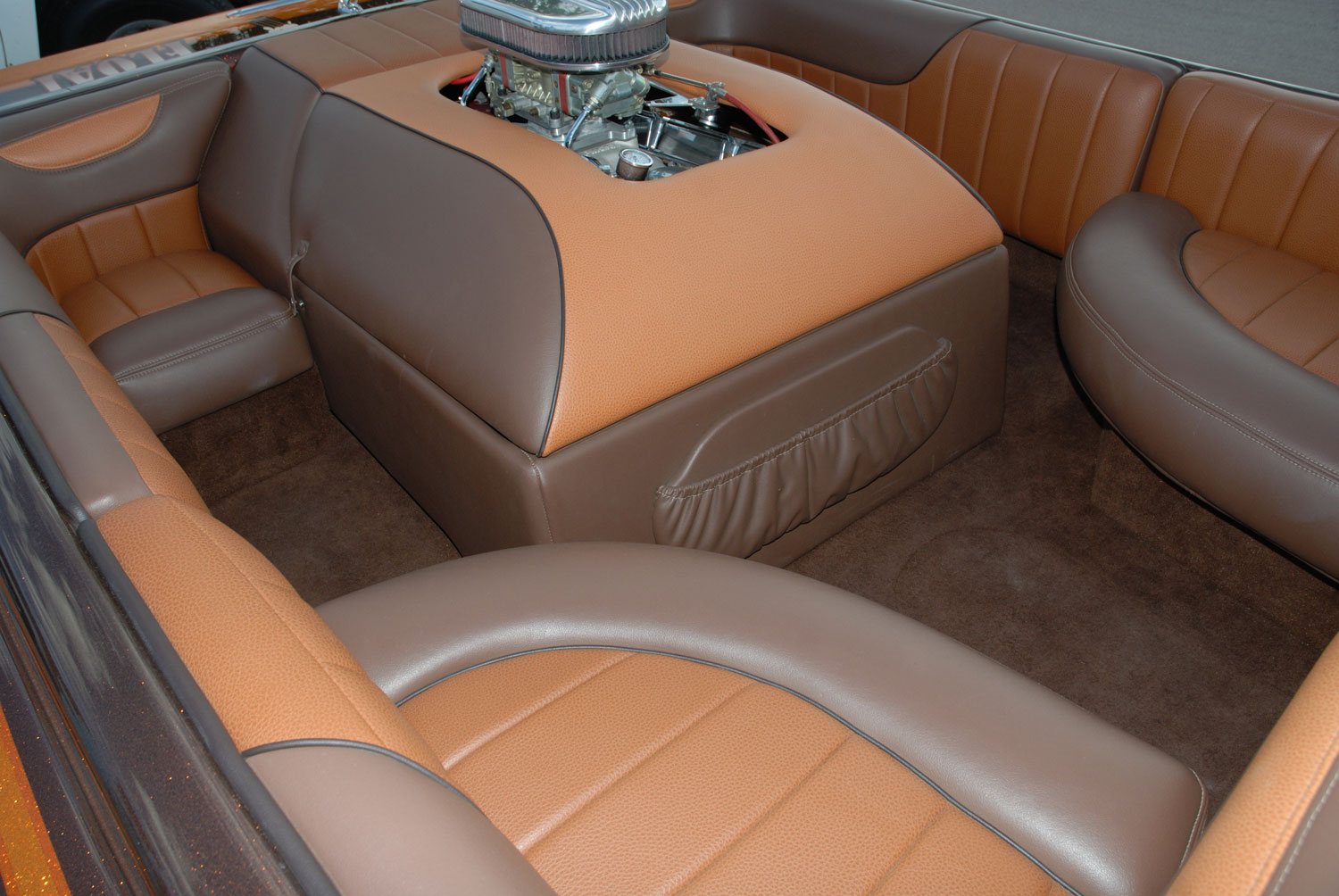 Since it was pushing 25 years old, “Root Beer Float’s” gelcoat was beginning to show its age. Jeff Glow at Smooth As Glass in Riverbank, California took charge and had no trouble bringing the deep copper metalflake luster of this Hallett classic back to showroom quality.

Maybe the most surprising thing about “Root Beer Float’s” present condition is the Hardin Marine 454 engine between the stringers. Now in its 42nd year, Dave claims that the engine has never really been touched, internally at least. “I guess it just goes to prove that if you take good care of an engine, it will take good care of you,” commented Dave. “The rotating assembly of this engine has never been apart. It’s just your basic four-bolt main Chevy that Hardin Marine sold with stock LS-6 pistons, open chamber heads and a single 750 cfm double pumper Holley carburetor that runs just fine on 91 octane. It’s good for about 400 horsepower at my 4,800 to 5,000 rpm redline. The boat still launches hard on acceleration and my top end is in the mid-60s.
Just a really sweet package.” 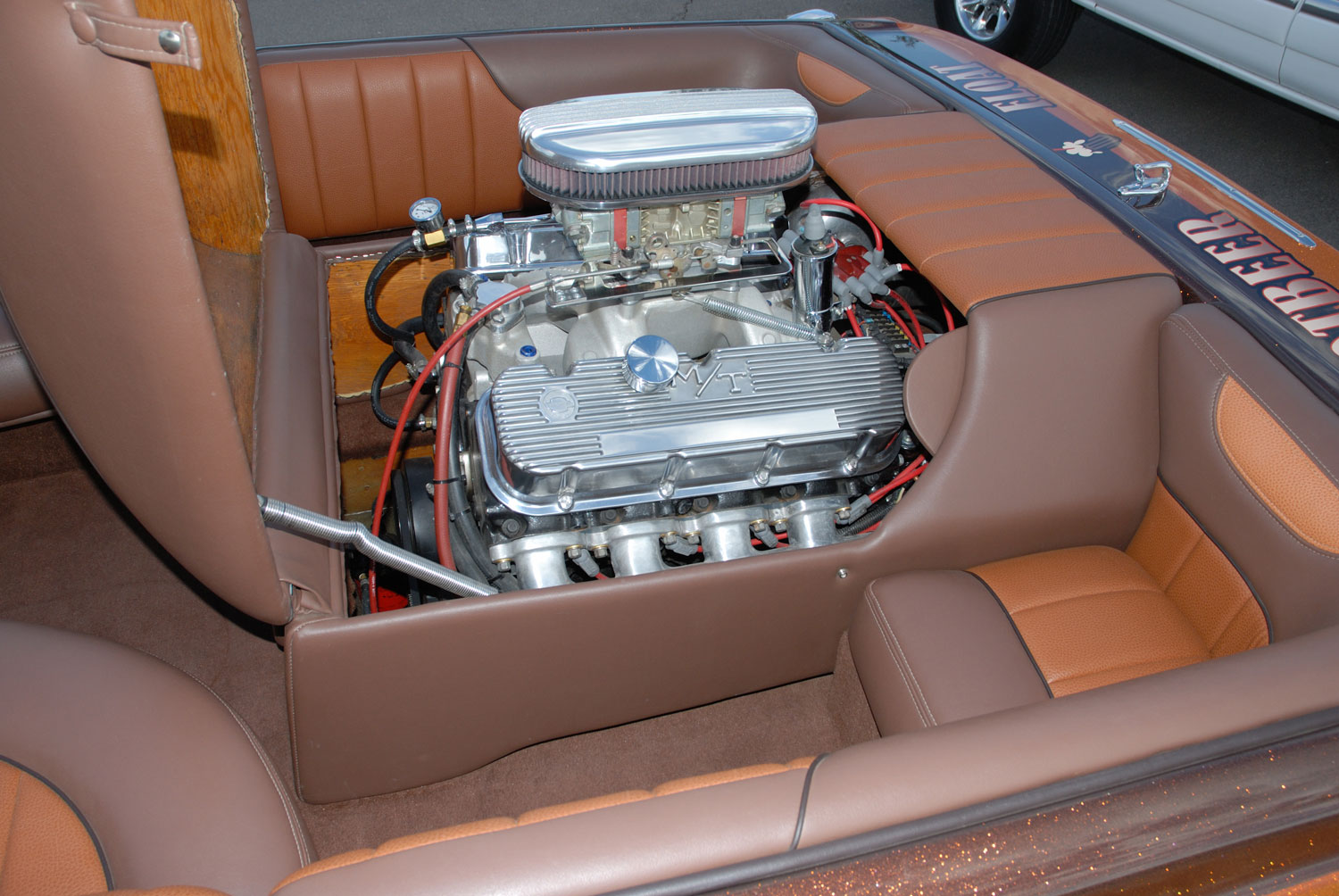 Dave has “Root Beer Float” in tow to his favor boating spots like the Avi Resort and Big River on the Colorado River or north to the Delta and New Melones Lake as often as possible. And can you blame him? Who wouldn’t want to spend as much time at the river aboard a classic tasty treat like this!
Reactions: BlowMe, DC-88, Beautiful Noise and 10 others

Awesome article, but it needs to be update with HallettDave's latest engine spec's...
Reactions: rush1 and angiebaby
Read more…