Words by Dinarella
​
To know Roy Schrader was to instantly love this special soul from the first moment you met him. And boy does everyone have a story about where he or she first met Roy – whether it was over a few shots of his favorite top shelf tequila and (equally adored cheese/carrot cake concoction) at Shugrues or Babaloos; bumping into him with his daily breakfast buddy Chris Drew at Rusty’s; stopping by his horsepower-laden shop for him to masterfully machine some 5-axis parts; or crossing wakes on the lake when he was in his happy place with family and friends hanging on and hollering in his Eliminator, or another of his aquatic obsessions from his collection. Keeping up with Roy and his toys was a daily challenge; high-performance horsepower ran through his veins to his brain.

Regardless of how he came into your life, the amiable and always-smiling Roy, had the persona of a rock star that people would flock to be around. And at six-foot-two, that Schrader smile shined above and beyond. As he watched the world go by, he had nothing to prove – only good vibes, passion and positive light to add to the moment. As a giver, he did everything he could for people, damn he didn’t even have to know you, and he would go out of his way to help you (always asking little in return). He was happy to teach you, tell you a funny story, text you a hilarious “Schrader style” meme, or take care of your tab without saying a word. That was the generous gentleman Roy was! 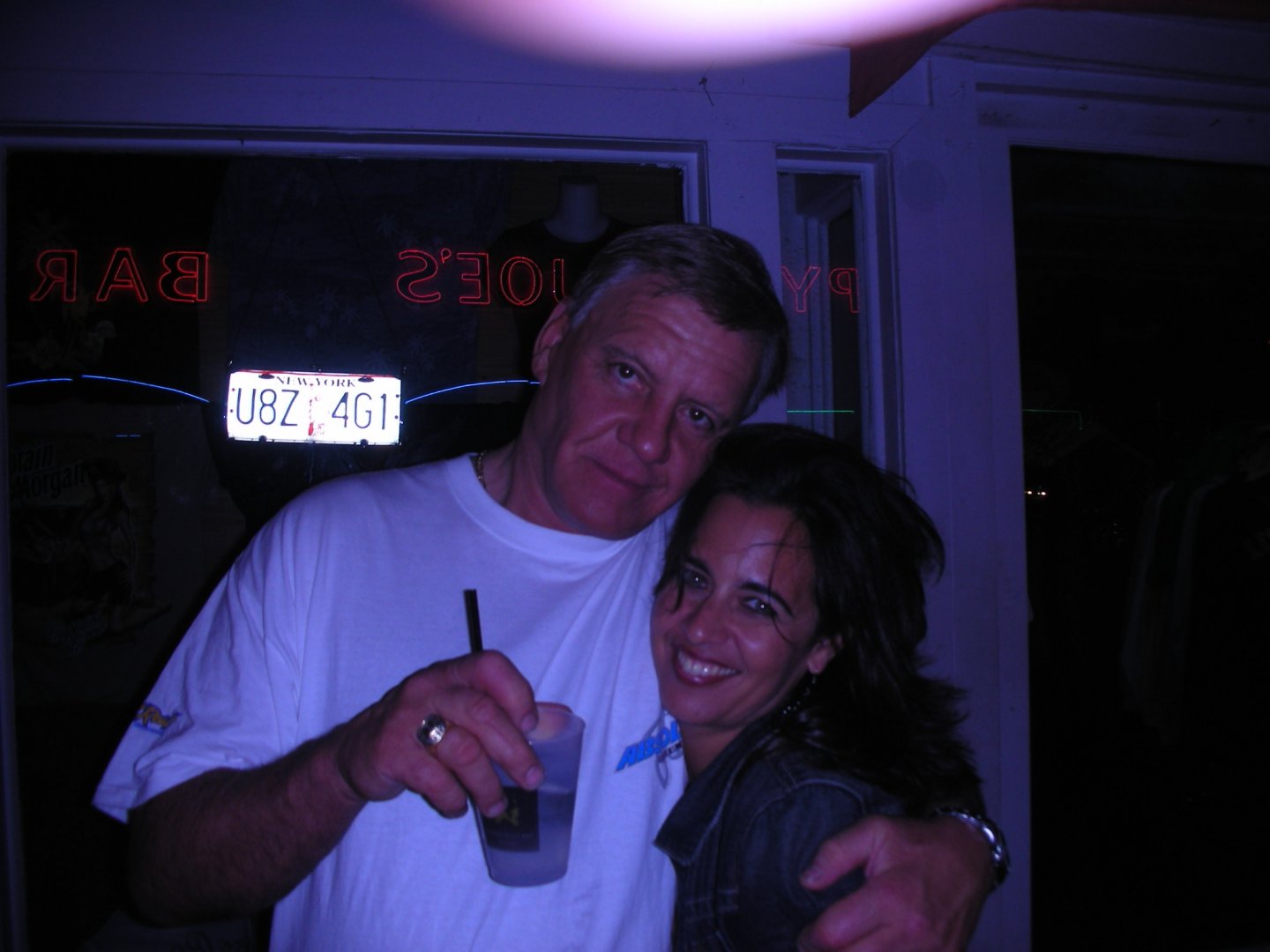 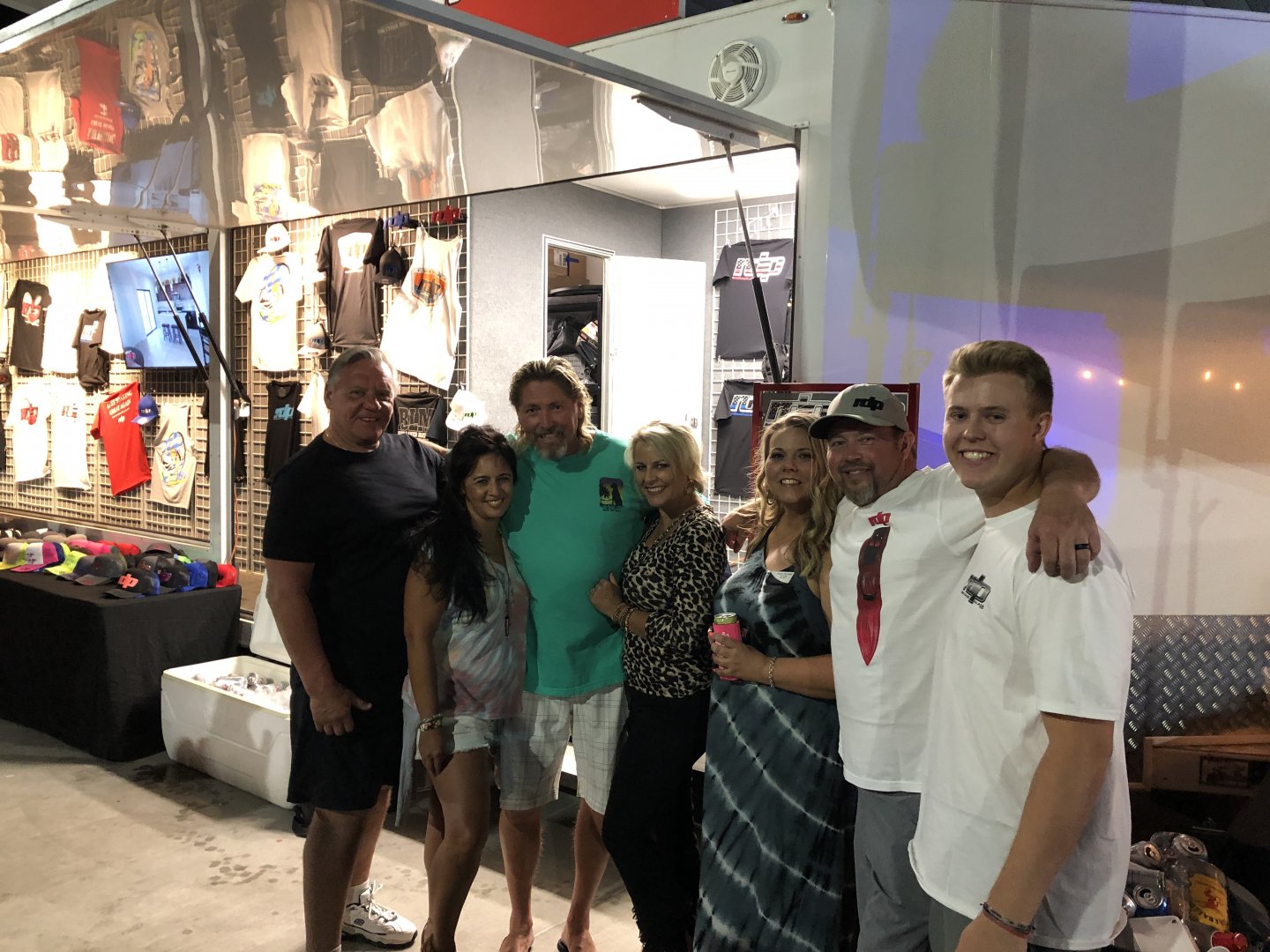 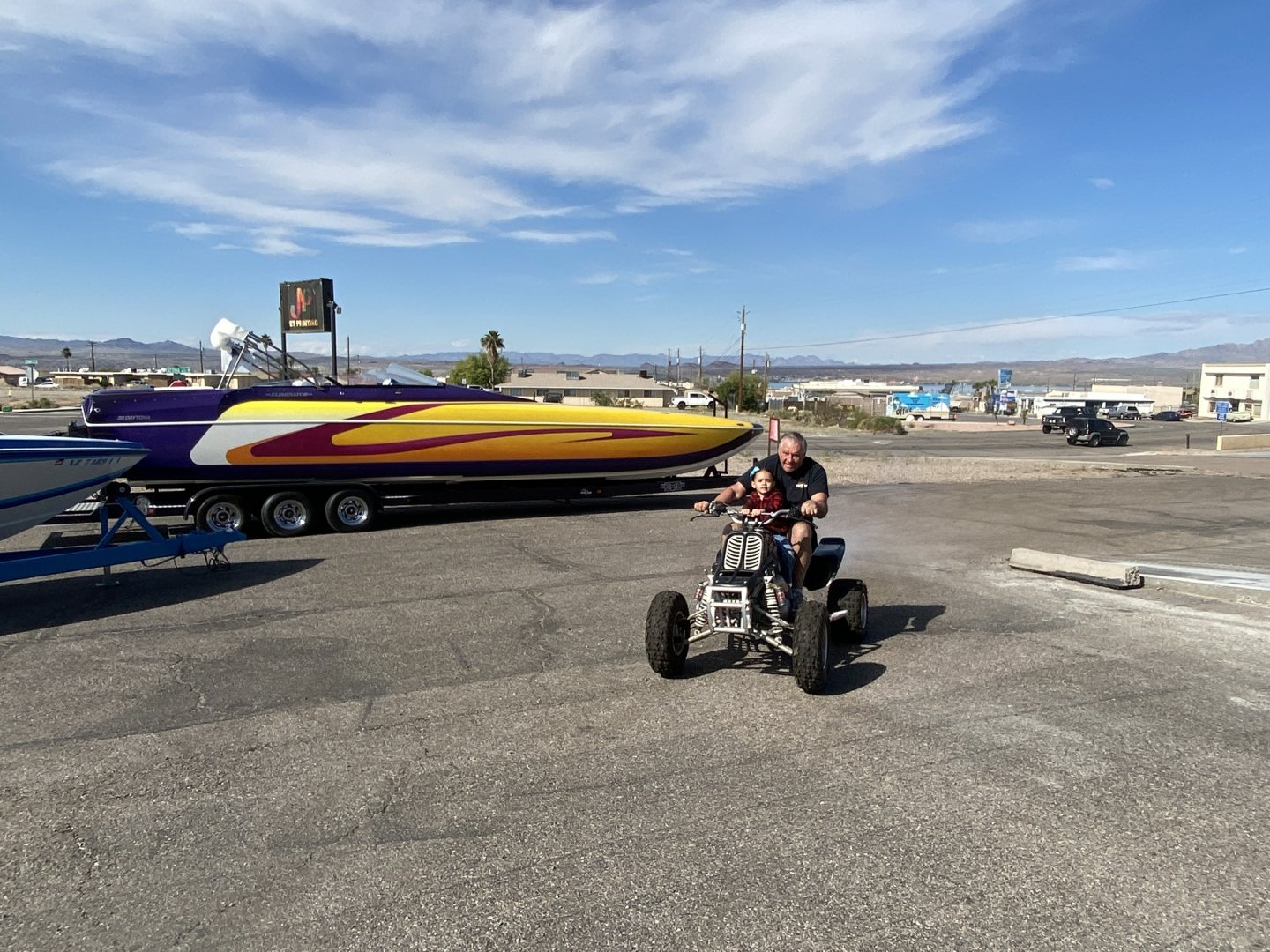 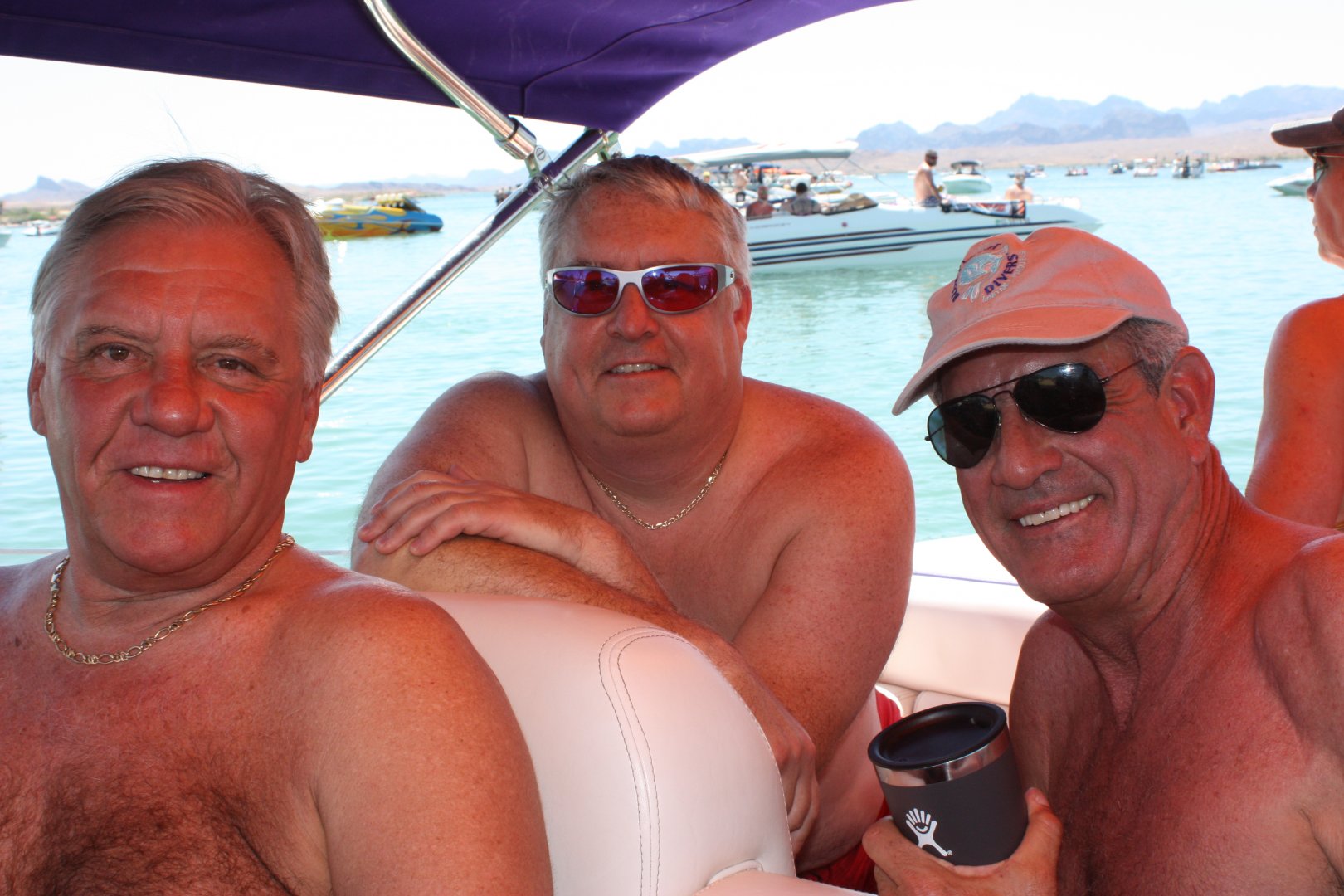 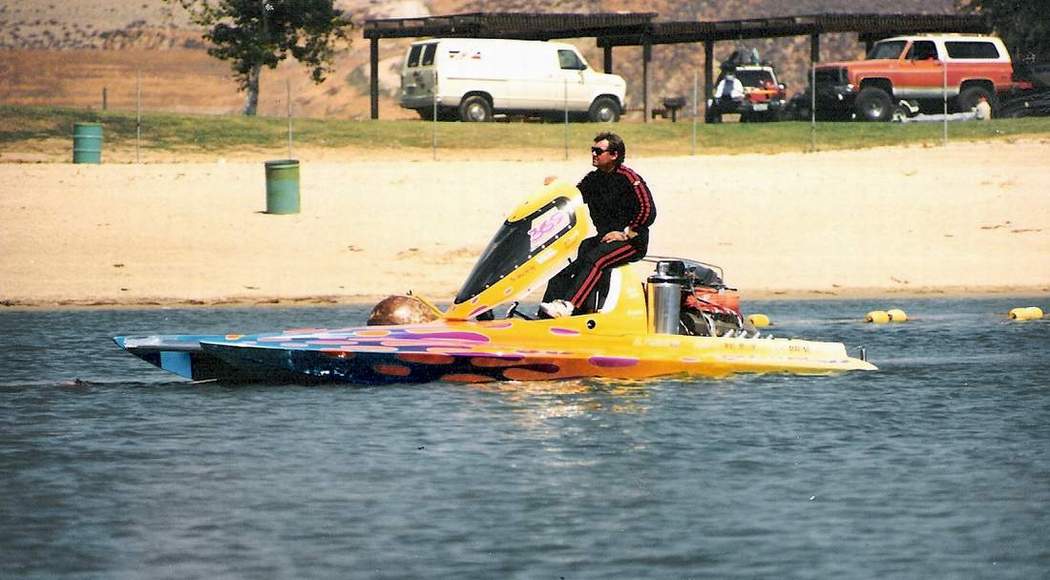 After spending a month out in LHC at his home, I started calling him the Godfather of Havasu – he knew everyone, everywhere we went. And if he didn’t know the peeps sitting next to us at dinner or the bar, by the time we left, we both knew them. But deep down, Roy was actually rather private and what mattered most to him was the happiness of his siblings, his daughter Sara and his six year old granddaughter Charlie, the absolute apple of his eye. His life revolved around Charlie, from picking her up in the Calvary Christian school car line three days a week, to taking her out on the boat, to more long term dreams he envisioned for her future.

Godfather may be what I called him in his social circles – GENIUS is what I called him when it came to his work. Back in California, at an early age he started Get Real, his billet hardware and custom boat parts company in the Santa Barbara area. And rightfully titled, there was no one more real than Roy Schrader. He worked his whole life tirelessly pulling all-nighters to meet deadlines fulfilling orders, even sacrificing his yearly trek to the Key West Worlds a few times due to big projects he had to complete. He’s done everything from the gas caps for DCB to support pieces for umbrellas. One time down in Key West, we were all sitting around the pool at this resort, and I’ll never forget, he said, “Look up, you see those pieces, I made them.” He had a talent like no other for his craft. Apart from being a perfectionist, he was a mentor to the younger generation of machinists always eager to recommend a better solution, but more importantly, explain to them how and why it should be that way.

After I saw our friend and RDP member Tank’s gold Cigarette necklace, I didn’t shut up about it and it led to Roy making me numerous Dinarella necklaces. He dedicated hours writing the codes. I was fascinated by the way his mind effortlessly worked as he attempted to teach me all that was entailed. In the end, he tooled and cut several different sizes and versions until he was completely satisfied they were perfect. 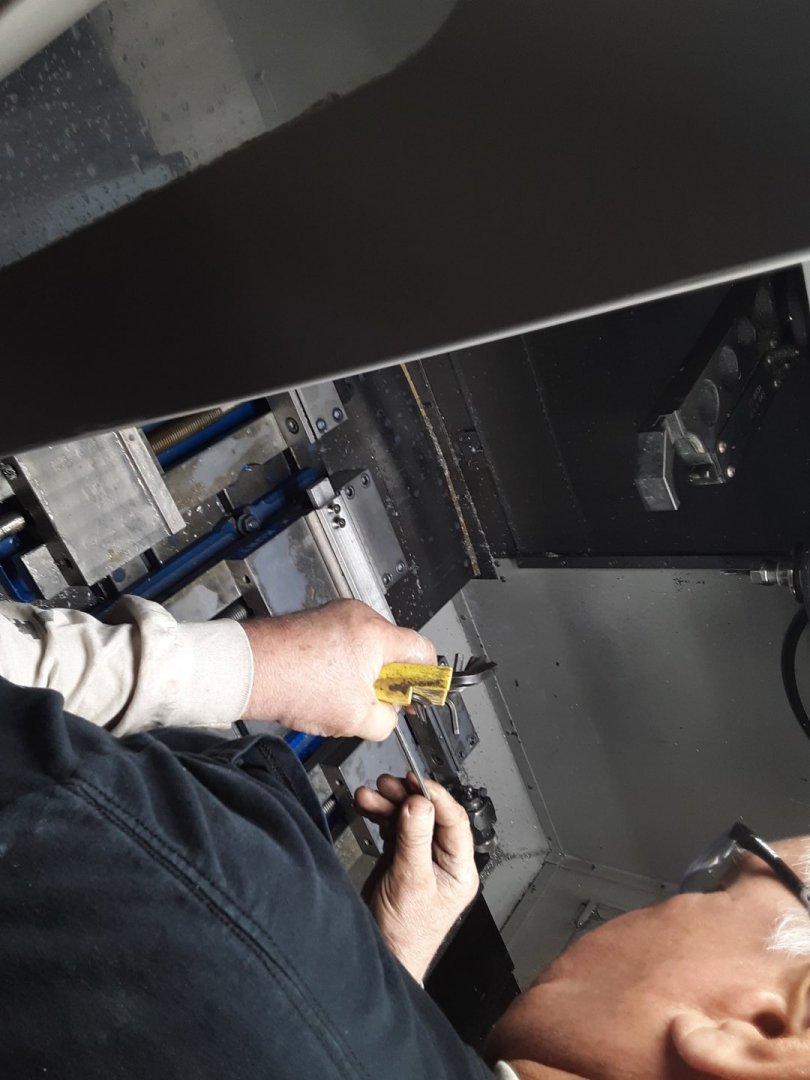 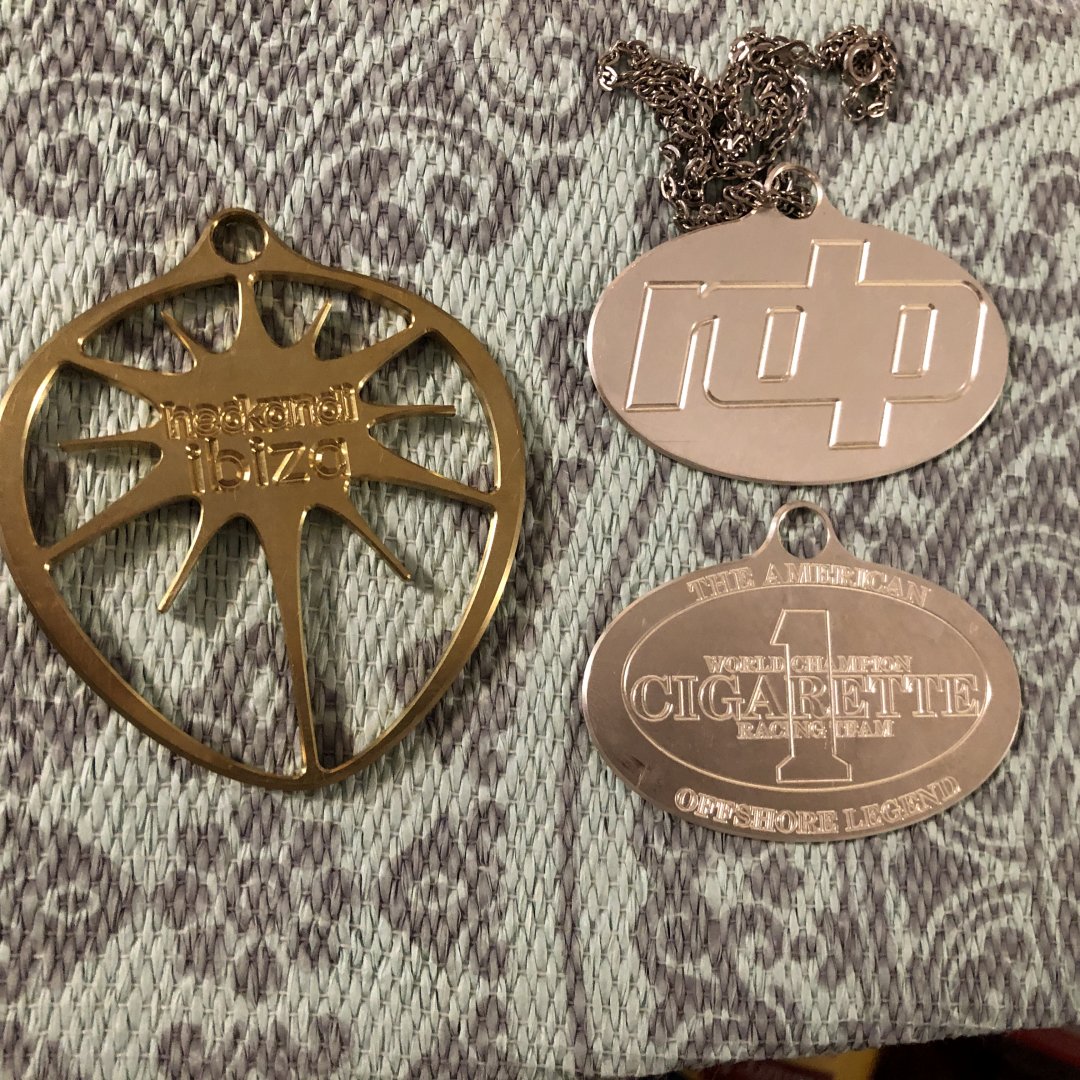 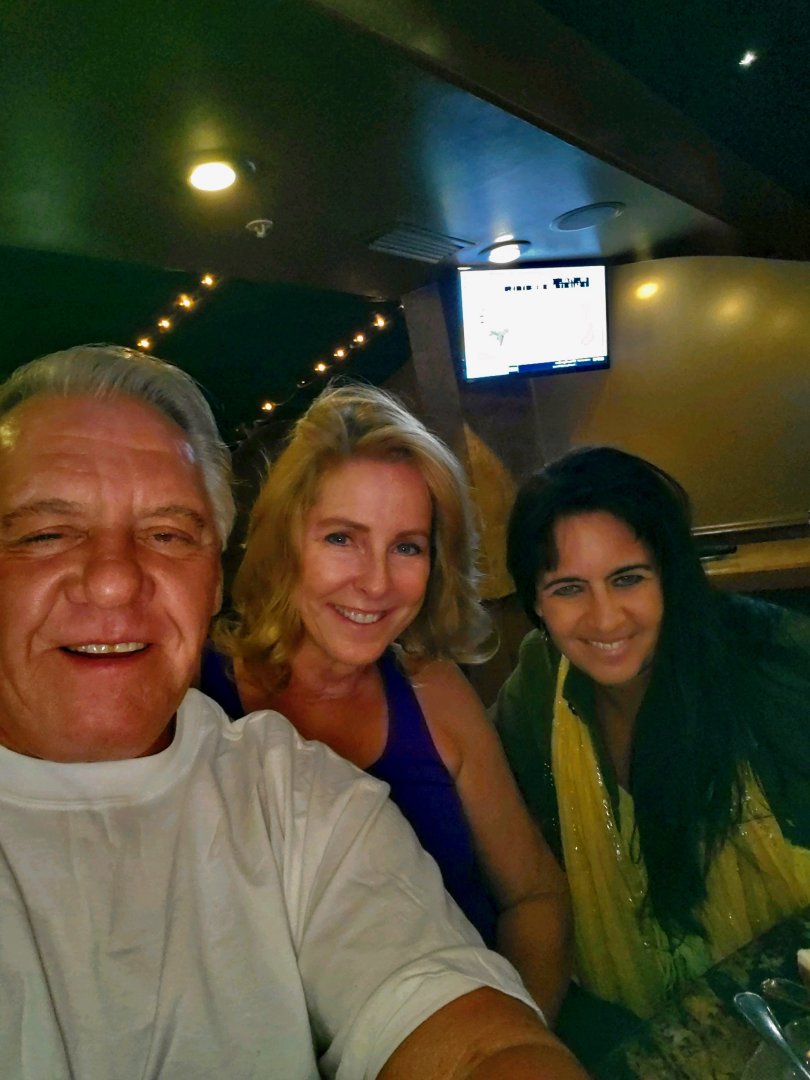 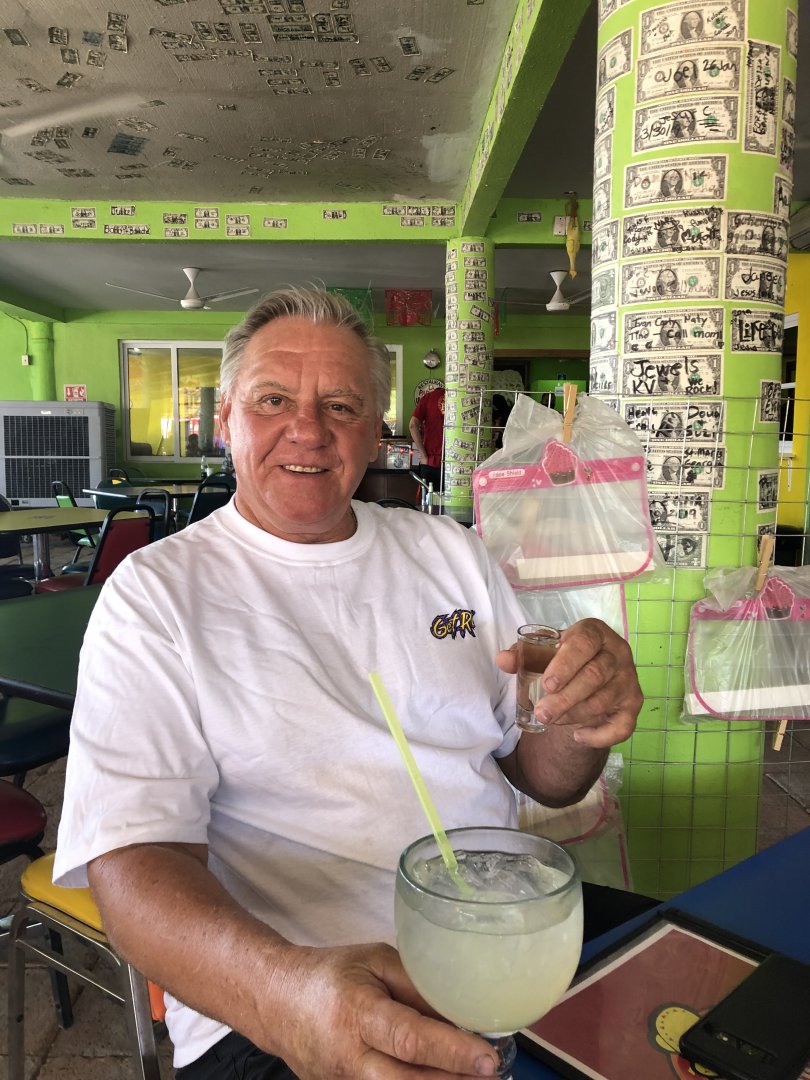 While I watched him create masterpieces in the shop, I spent a lot of my time in his office working on editorial for RDP and LCC. When he read the Supercat Fest West story, he laughed and with a big grin said, “You finally mentioned me in a story.” I’ll always treasure his Schrader-eque joking, and I had to laugh right back because all that I had mentioned in the story was that I was “sitting on Acoma Blvd in his office writing the story.”

After he made that comment, it got me thinking… I never wrote anything about this brilliant man who I was proud to call my big brother ever since we first met during his professional offshore racing days with Hidden Agenda twenty years prior (though his racing career stretches back to the drag boat days before my time.) What he didn’t know was I planned to surprise him with a story on his new red and black 28’ Skater once he got the engines in and it went from sitting on the tilt trailer decorating the back wall of his shop, to bringing him triple-digit joy running through the chop.

I’d say MACHINE or any derivative of it was his favorite word. If he was not running a machine, he’d be gunning it in one of his big-boy Roy-toy machines. No matter if it was in the water, on land or over sand, he had a thing for anything with an engine. Uhm, let me re-phrase that– anything with a fast engine. He had a knack for making things that already go fast, go just a little faster. His need for speed drew out his sense of humor a lot; he would just shake his head no whenever the slight mention of a center console or pontoon entered our conversations.

He had more boats, bikes and trikes than I have shoes…just to get to his water cooler in the back room, I had to pass by, over or under countless crafts and cool stuff, but as a Skater Nation disciple and close friend of Peter Hledin, I’d have to say Roy will always be remembered as a Skater brother. He actually had another one on the way, but sadly never took delivery of his newest cat. When he called me last month the same week he was supposed to be picking it up, I assumed he was motoring along in his big red truck listening to his favorite song “Turn the Page” by Bob Seger on repeat, on some interstate between Florida and Arizona pulling his prized possession back west… never did I expect to hear he was calling me from ICU.

There are so many people I would like to mention that were integral parts of Roy’s life, but since I would not want to forget anyone (nor do I know everyone whose life he touched), instead of me contacting you all for your quotes and stories, I’d love for you to add your personal firsthand experiences in the comments section below here. Share something special about Roy that would make him smile: how he came into your life; a funny time you shared together; a piece of wisdom he shed on you; or elaborate on a game-changing custom boat part he fabricated for you.

I couldn’t end without thanking Stacy, River Dave and the RDP members who were willing to do whatever was needed to get him out of the hellacious Havasu hospital he was suffering in. But most importantly I must recognize Damon LaBlue. Not only was he Roy’s architect and a dedicated friend, but as a professional EMT, he was a crucial figure fighting the disgusting medical tyranny in the Disunited States of Unamerica on Roy’s behalf during these last tragic weeks.

Roy’s powerboating legacy will live on through Damon. He will be racing his Sleekcraft at the LOTO Shootout at the end of this month in his honor, for it was Roy who gave him the performance exhaust for the motors and the K-planes – out of his excitement to see the boat pushed beyond all expectations.

To me and all that knew this ray of sunshine -- he was our “Roy of Sunshine.” I would have never imagined this would be my Roy Schrader story. To my big brother, I’m forever grateful for our decades-long friendship! I love you Roy and sure you are teaching God and all of heaven a thing or two about speedboats and CNC machines right now. RRIP- REST and RACE IN PEACE!

Memorial arrangements are in the process of being made, please check back to RDP. 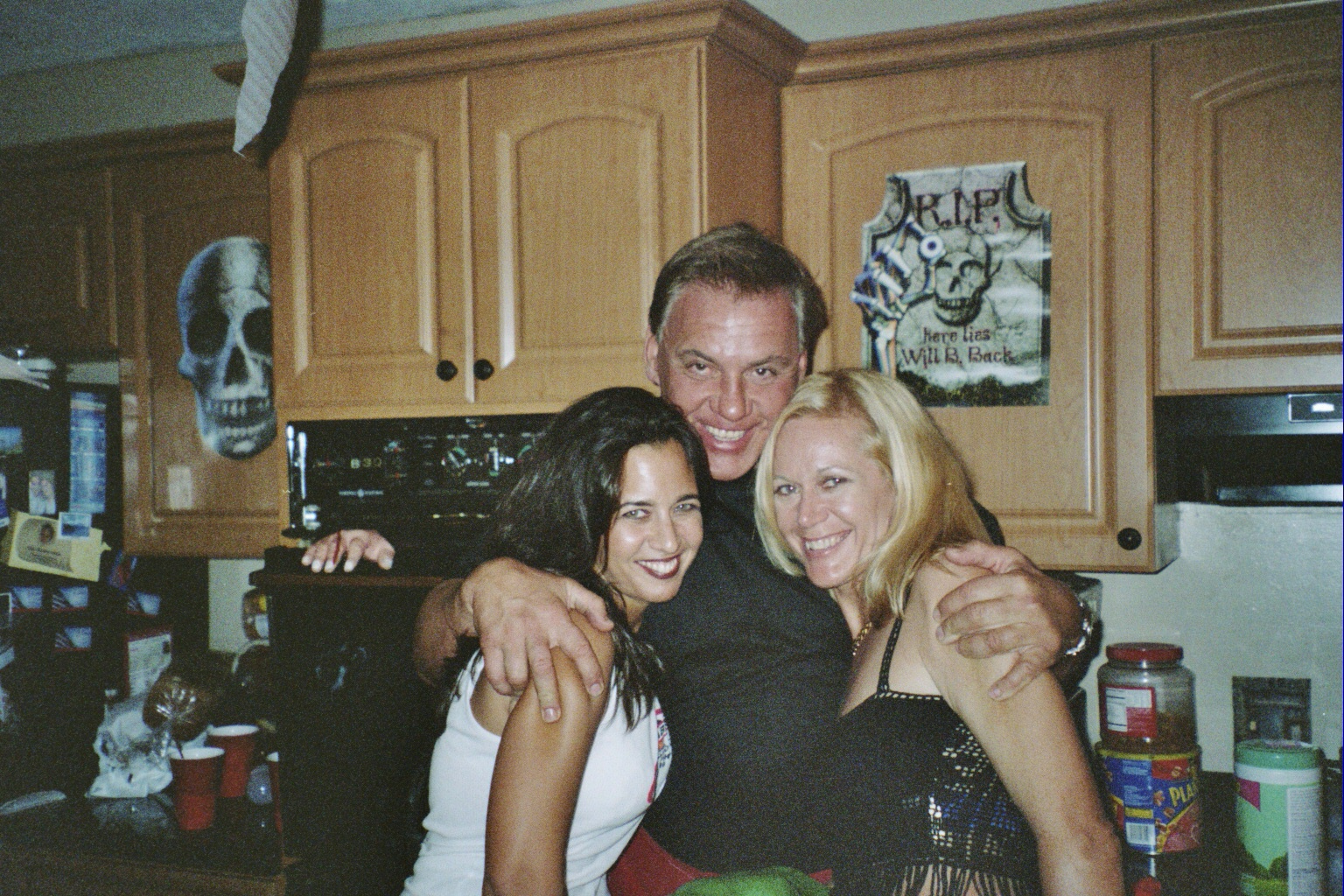 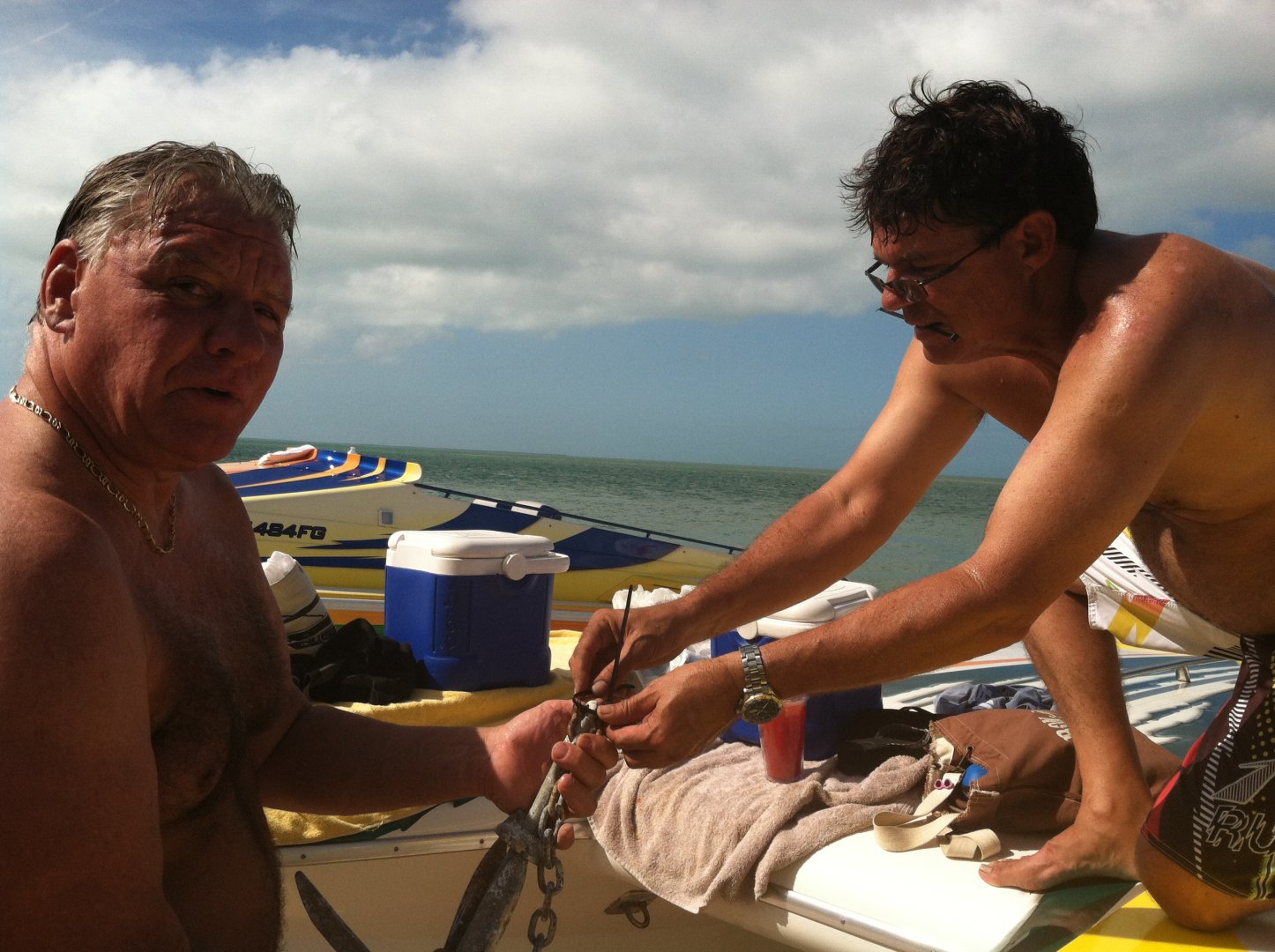 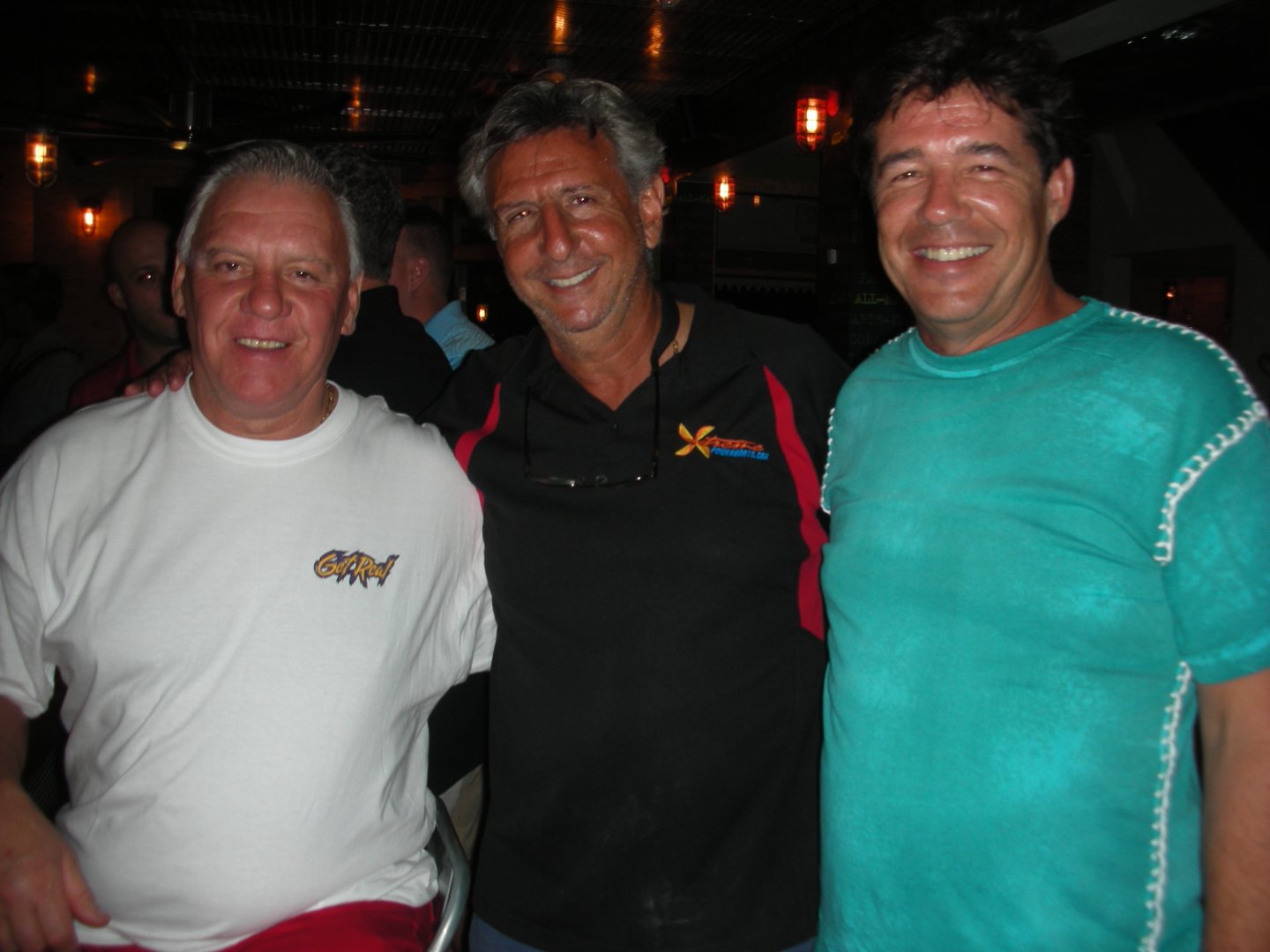 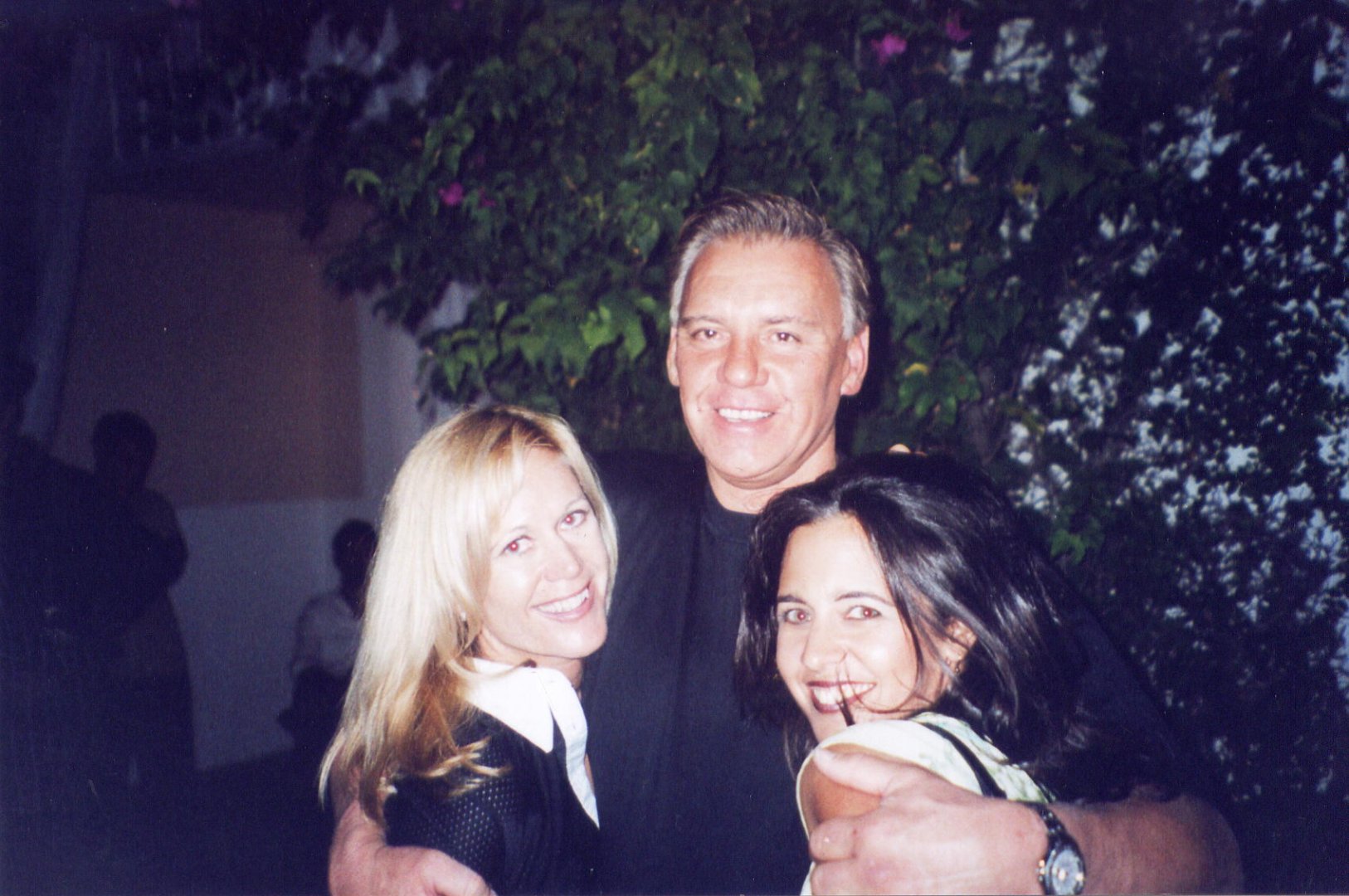 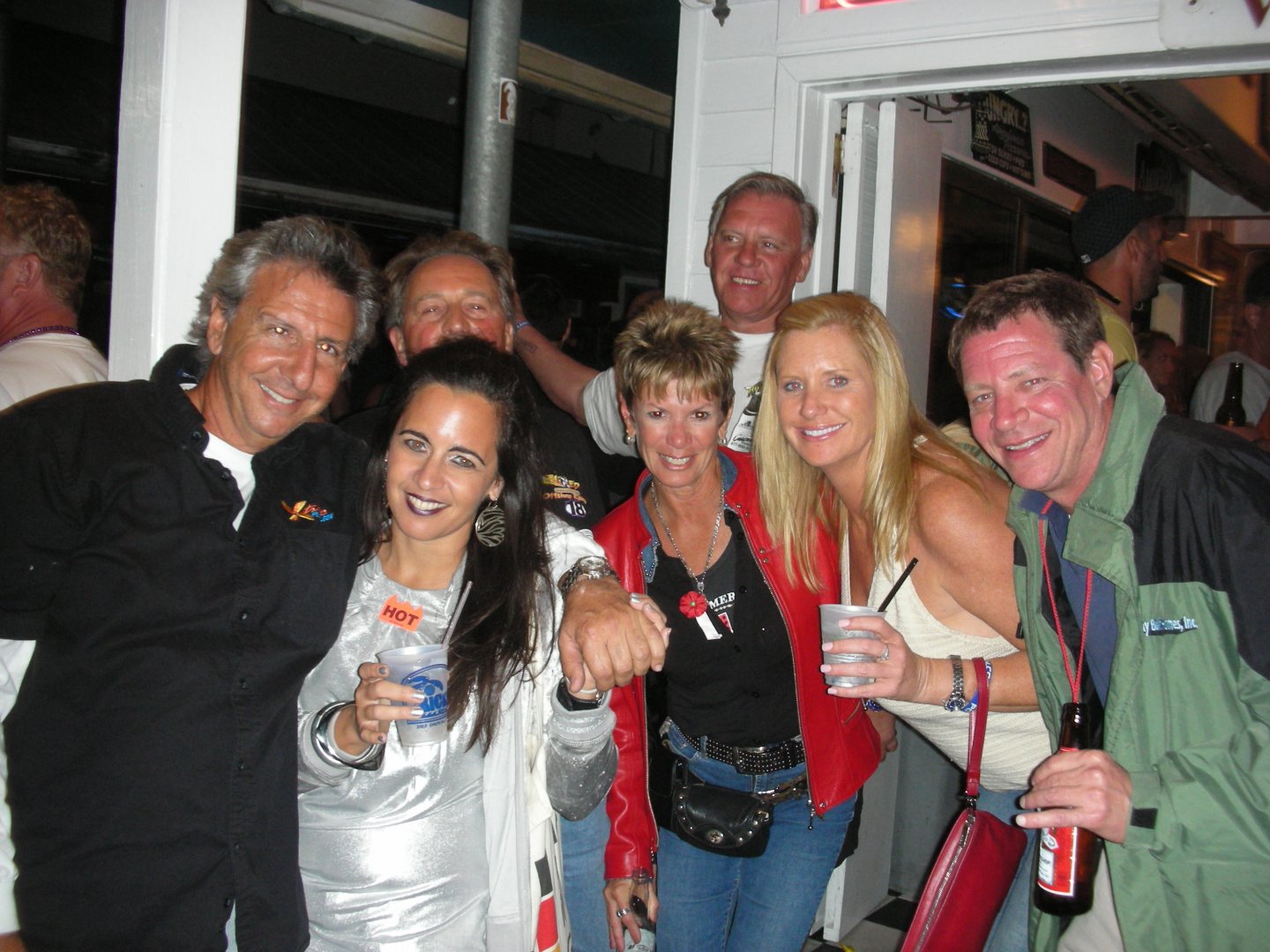 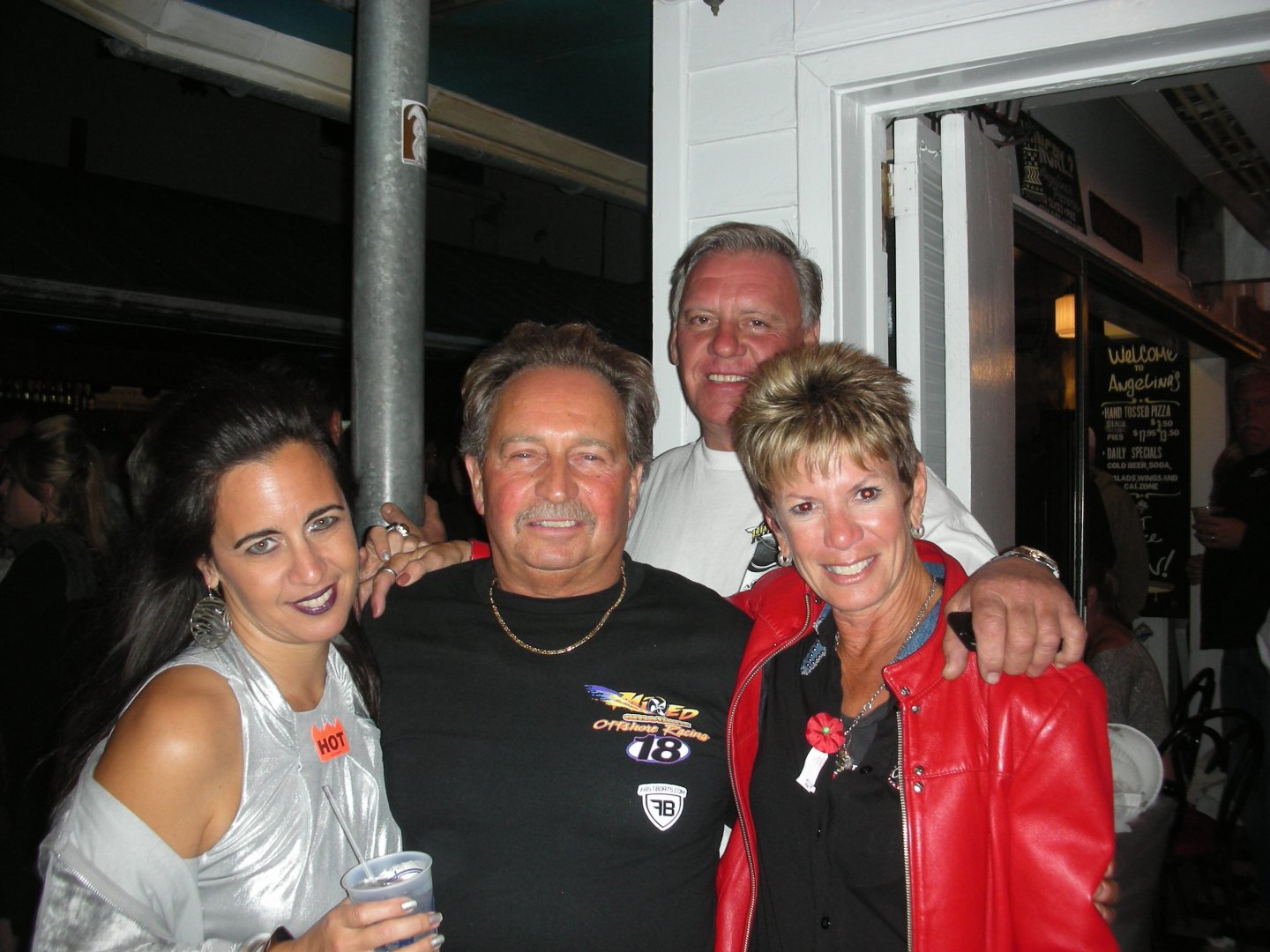 very nice write up. RIP Roy
Roy was an amazing man and a big part
Of my Havasu Inner-Circle of friends! We met years ago on a side-by-side adventure where his Can-am flipped over and the Havasu family of riders took care to ensure his safety & the safety of his friends in the vehicle. He was always there to help a friend, share a story, get you out of the house to listen to live music and a meal, or just chill with a drink at sunset. You will be missed

Wow what a way to remember a wonderful, unselfish, kind hearted, giving man!! Thank you Dina your words, describe Roy to a tee!! The three of us had some great times together and I will miss him dearly. The photos of us bring back such wonderful memories the best I can recall!
The thought I have of Roy the most, is how lucky I am to have had him in my life as a friend, until we meet again keep the trim light and the hammer down, your brother Steve
Intrigue9, I was in that can am that flipped along with mark and barb. That was really the first time I met Roy. New Year’s Eve weekend 2017. It was an adventure from the moment I met him. Thank you for the great memory of Roy, Dinarela, you wrote a great perspective on him. He was a great smile, dry sense of humor, gentleman, greatest hugs, protector, generous, and a great mind. It doesn’t seem Possible that he is gone. I will Miss him very much. Until I see you again Roy. Love you! 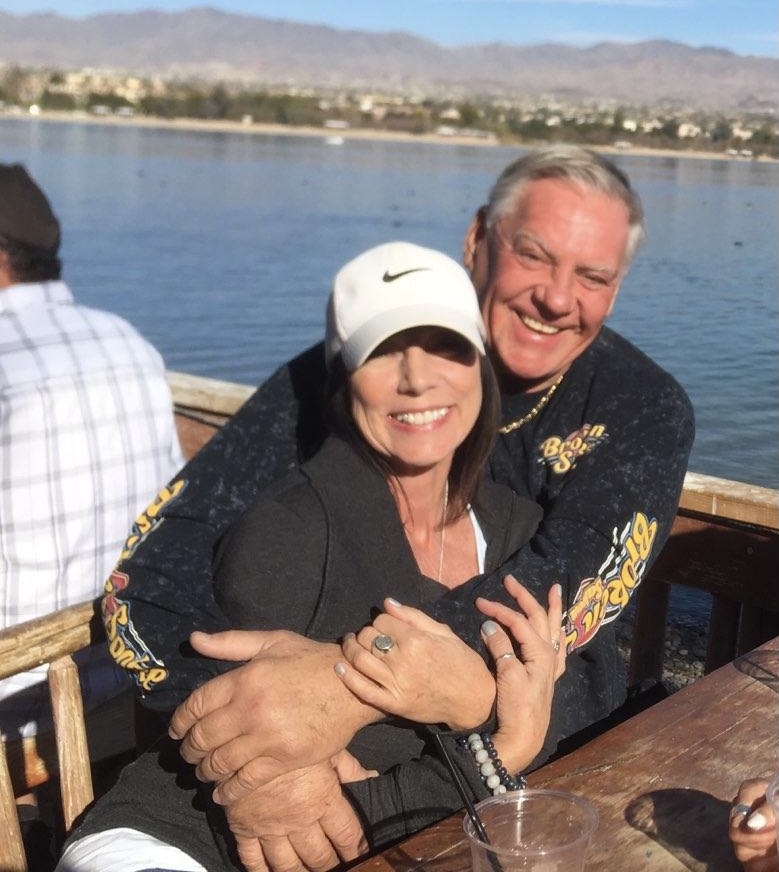 to some fun memories with Roy

Well done Dinarella, Roy lived one hell of a life and it's amazing seeing how many people he inspired and loved him.

RIP Roy, the world needed more men like you
I became a better person just by Roy’s friendship. I’ll never forget when I stopped by the shop to give him a printed rendering of the redesign of his house. He teared up and I had to turn away and fake a cough to hide mine. He always made everyone feel special no matter who they were. He was so much fun to be around. Thanks Dina for writing this story. We could spend hours upon hours telling “Roy” stories. Chris Drew said it best, “Roy was the nucleus that brought people together and formed friendships.”
Roy would always say hello to me and the family and ask "how's the Daytona running?". He truly lived life to the fullest. Going to miss seeing you legend! Rest in paradise Roy!