The Salton Sea 500 marathon race was a boat breaker. During most years (1961-1965*) less than 25 percent of the original starters were able to limp to the finish line. The four-mile triangle race course was a torture track. By days end, the pits were littered with blown engines, fractured hulls, broken drivelines, mangled rudders and even an occasional pretzeled steering wheel. Although some called it the ultimate proving grounds, it looked more like a salvage yard after a Saturday night demolition derby.

Eighteen-foot flatbottom inboard ski boats and even smaller vee-bottom outboards and twin engine cats were never meant for this kind of abuse. And that reality didn't go unnoticed by the likes of several prominent marathon racers of that era, especially Rayson Craft's Rudy Ramos and Bob Patterson of Patterson Boats.

Rudy, with co-driver Ed Olsen, won the first Salton Sea 500 in 1961 driving an 18-foot Rayson Craft flatty with a 392 Keith Black Chrysler Hemi engine. The two days of intense pounding solidified both Ramos' and Patterson's contention that when it came to Salton Sea, bigger was unquestionably better.

Simultaneously, but separate, Ramos and Patterson began construction on what would later prove to be the defining inboard marathon race boats of that era. Both decided that conventional big block automotive V-8s were not the answer. Instead, both innovators chose to tap into World War II technology and availability, utilizing the virtually indestructible Allison V-12 aircraft engine because of its massive torque potential and relative light power to weight ratio. These engines had also demonstrated their ability to win boat races having won favor with many of the top unlimited hydroplane teams in the 1950s
. 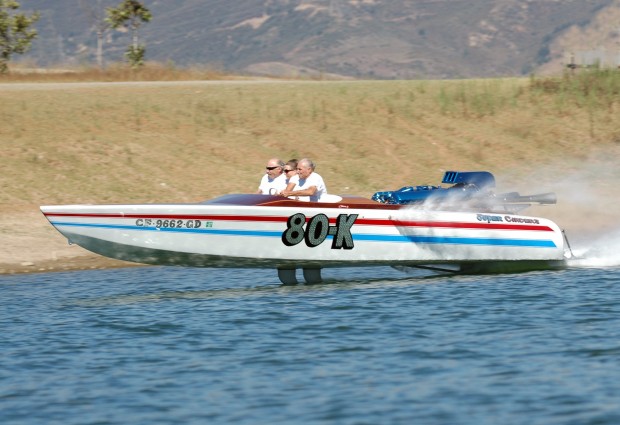 At the 1962 Salton Sea race, Patterson unveiled his nearly 24-foot long all-wood "Super Cinders" Allison powered creation. He was one of two competitors in the field that year with V-12 muscle in the engine compartment, the other being Jack Salmon in a smaller Rayson Craft, "Aero Marine." After 9 hours and 30 minutes of grueling competition, Mike Wallace in an 18-foot Rayson Craft with a 406 c.i. Ford Interceptor engine prevailed, edging Patterson and a host of co-drivers including Leroy Penhall and Dwight Moody Sr. by a scant eleven minutes at the finish line for second place overall. "Super Cinders" would have easily captured the championship, however, had it not been for an overheating gearbox. Salmon's Allison rig also finished fourth among the inboards and seventh overall. This would prove to be "Super Cinders" best Salton Sea performance as the 1963 and 1964 races were plagued with assorted mechanical problems for the Patterson entry.

In 1963, the focus shifted back to the smaller inboard flatbottoms as Wells Wilson and Doug Fowler in the U-6 Rayson Craft dueled side-by-side for several hours. Finally, Wilson's Sanger/427 Ford combo eked out a narrow victory for the inboards. What was surprising, however, was the fact that outboards for the first time dominated much of the race with ten of the top fourteen finishers using clamp-on power.

Ramos and company came back to Salton Sea in 1964 with a vengeance, armed with a new V-12 Allison powered 20-foot vee-bottom "Cream Puff" sponsored by Hot Rod Magazine. Ramos and Ed Olsen lead the 500 miler virtually from start to finish in spite of the fact that five other Allison powered boats were also in the race. The Salton Sea result was rather predictable since Ramos had easily won the Lake Berryessa Six-Hour marathon some eight months earlier as "Cream Puff" crushed the competition there as well, running ten miles an hour faster than the rest of the field at
only half-throttle
. 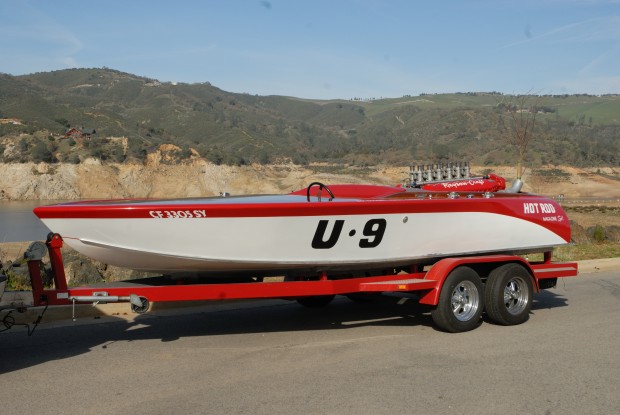 Unfortunately for Ramos, Patterson and the rest of the Allison marathon racing fleet, race promoters worried that the dominance of the P-51 fighter engine would soon discourage other racers from competing with more conventional and affordable equipment. Within a year, the American Power Boat Association issued a ban on the behemoths, keeping them out of future sanctioned inboard marathon events.

With no place to race, "Cream Puff" and "Super Cinders" quietly faded from sight. Ramos later sold the boat and lost track of it for about twenty years until it finally was discovered in distressing disrepair without an engine, missing gauges and hardware, covered in dirt and repainted a lackluster powder blue. "Super Cinders" fate was only marginally better. In 1969, with the rise of the newly organized K Racing Runabout class, Patterson re-registered "Super Cinders" as a legal K-Boat since those rules did not prohibit the use of Allison engines. Although a good six-feet longer and several thousands of pounds heavier than any other boat in the KRR class, "Super Cinders" burned up a kilo speed trial with an official clocking of 106.71 mph for a new APBA and UIM world record. Sometime later, however, "Super Cinders" also wound up on the 'for sale' block and disappeared entirely from prominence until the early 1990s.

Southern California Cracker Box class racer Mike Leach heard a rumor that "Super Cinders" was slowly deteriorating in a storage yard out in the San Fernando Valley. Mike followed up on the tip and found the boat. It indeed was in a Reseda storage lot for the past 22 years, uncovered, with a 440 Chrysler V-8 engine and understandably in horrendous condition. "I really didn't know what to think when I first saw it," commented Mike. "It was in pretty rough shape. I knew the deck needed to be replaced, but a lot of the important hardware pieces were still there, especially the Dan Arena gearbox which you couldn't afford to reproduce today. I finally made an offer and the owner took it. It was the start of a very long journey, but I knew that it would be worth it. The boat had so much history it deserved to be restored."

As Leach was searching the whereabouts of "Super Cinders" he motivated his boating friend John Fell to check-out the fate of the long lost Rayson Craft, "Cream Puff." Remarkably, "Cream Puff" had come full circle and was back in Rudy's possession but in serious need of total restoration. Rudy had thought about doing the project himself, but never seemed to find the time or energy. Fell and Rudy struck up a friendship and it wasn't long before "Cream Puff" was wedged into Fell's home garage in Yorba Linda, California

For the next several years, Fell and Leach worked separately on their monumental restoration projects, but keeping in close touch to offer advice and encouragement. "I would have never been able to do this rebuild without Rudy's assistance and guidance," said Fell. "He knew the boat inside and out, and as it made progress I could tell that Rudy was getting more involved and excited about seeing it completed."

Mike had much the same reaction from Bob Patterson. "At first, I think he thought I was crazy to try and do this, but as 'Super Cinders' began to take shape he got more motivated. Where both John and I really needed his help was finding a couple of surplus Allison engines and then converting them for marine application. Bob was a master at this, and his in-house dyno equipment eliminated a lot of guess-work."
" 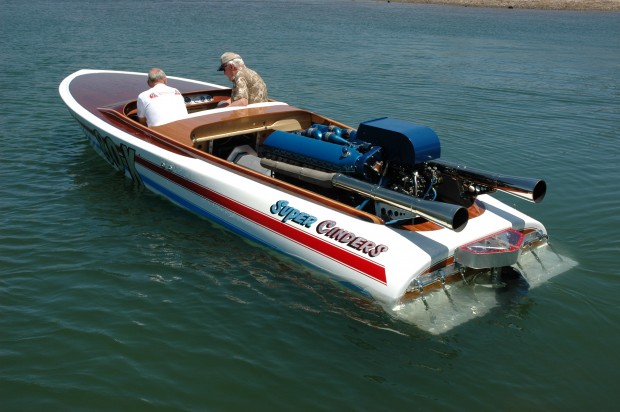 Because both boats were so special and custom, progress was often slow as John and Mike searched for suitable replacement parts. "Both Mike and I wanted to keep these two boats as original as possible," commented Fell. "Sometimes we could find what we needed, but on other occasions we had to fabricate new parts that matched the originals. It took me almost four years of searching just to come up with the six two-barrel Weber carburetors, and then I still had to cast my own intake manifolds. There just weren't any off-the-shelf parts that would work." 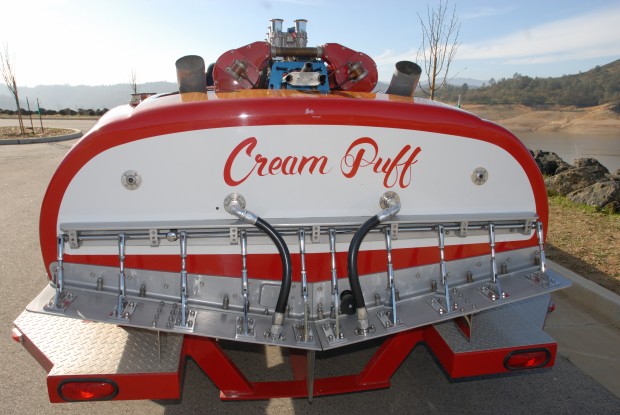 This year, "Super Cinders" and "Cream Puff" both celebrate their 60th birthday. Undeniably, both made an indelible impression on marathon power boat racing like no other boats past or present. Occasionally, both appear at nostalgia boat gatherings and regattas, still commanding the respect and admiration of racing fans young and old. Rudy Ramos and Bob Patterson are deservedly legends of the sport. Thanks to John Fell and Mike Leach we still have plenty to appreciate. End – Part 1

*Editor’s Note: There continues to be some question regarding how many Salton Sea 500 races there were. 1961 to 1964 are pretty well documented, but thereafter the trail grows quite cold. There’s reason to believe that Ramos and Olsen won again in 1965 in the oversized “Cream Puff” causing APBA to outlaw Allison V-12 power for marathons. 1966 and after is almost a complete blank – if any RDP readers have knowledge or results from the 500 in that era, please email [email protected] with comments.
Reactions: stokerwhore, OLDRAAT, BlowMe and 15 others