Seeing 20/20 brings those annoyingly blurry bits into focus – like making out the minute hand on your OMEGA Speedmaster or honing in on that distant Skater transom that reads Roostertails & Cocktails (real name); "SEAing 20/20" on the other hand is RDP's twist highlighting what was "out of sight" at this year's 2020 Miami International Boat Show (MIBS). 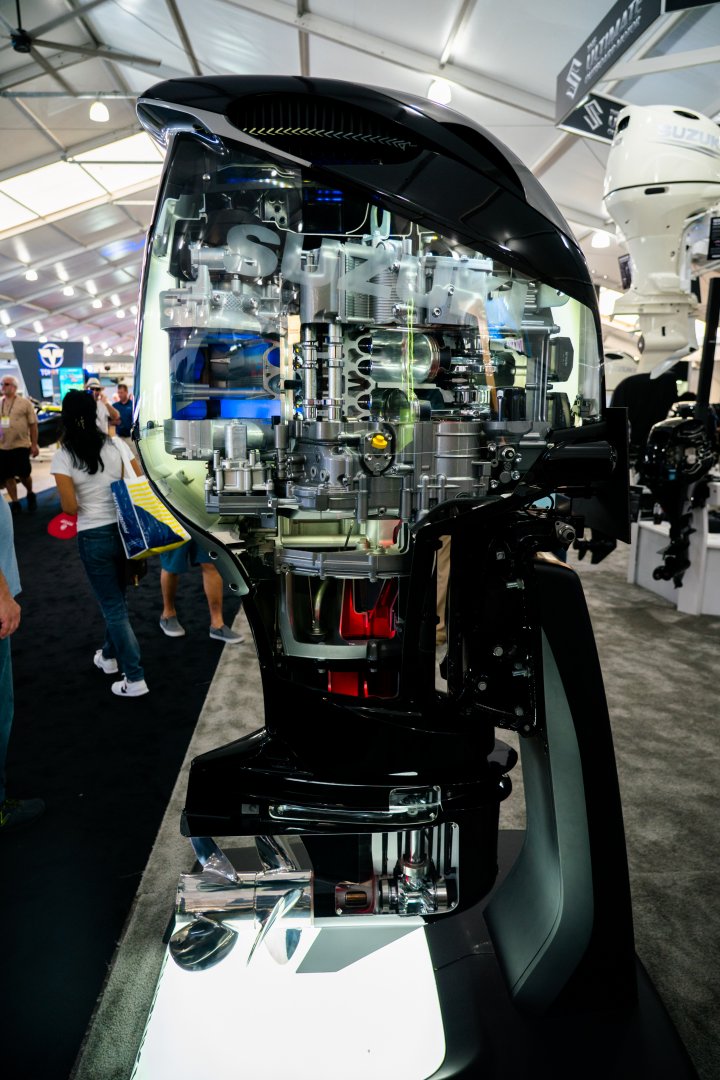 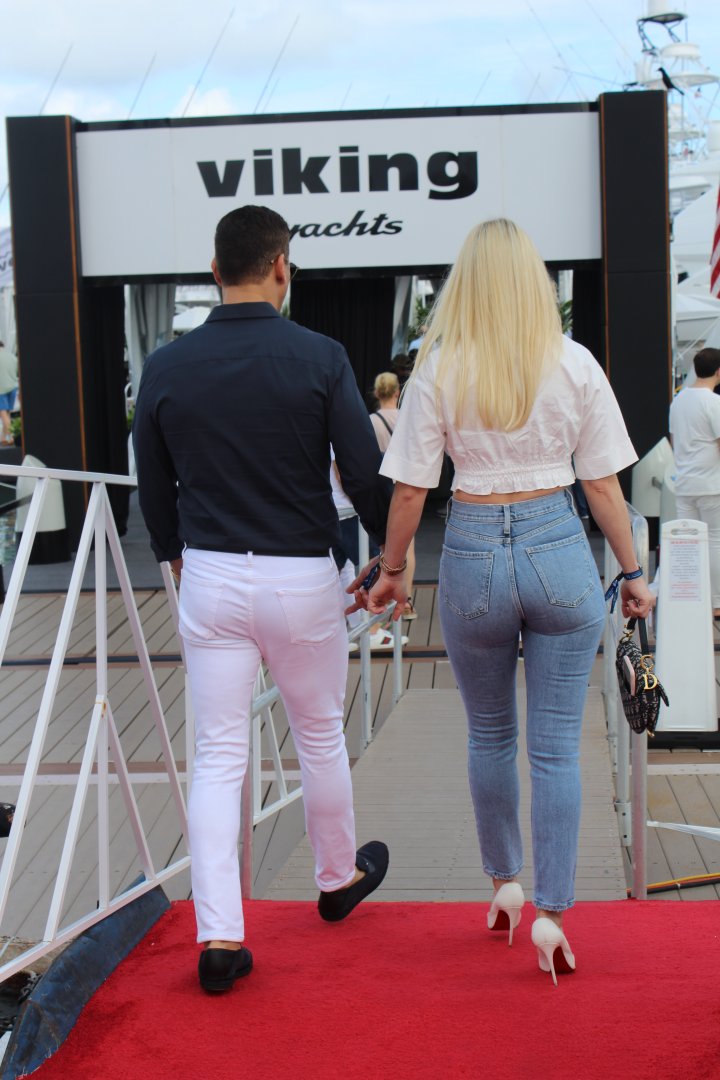 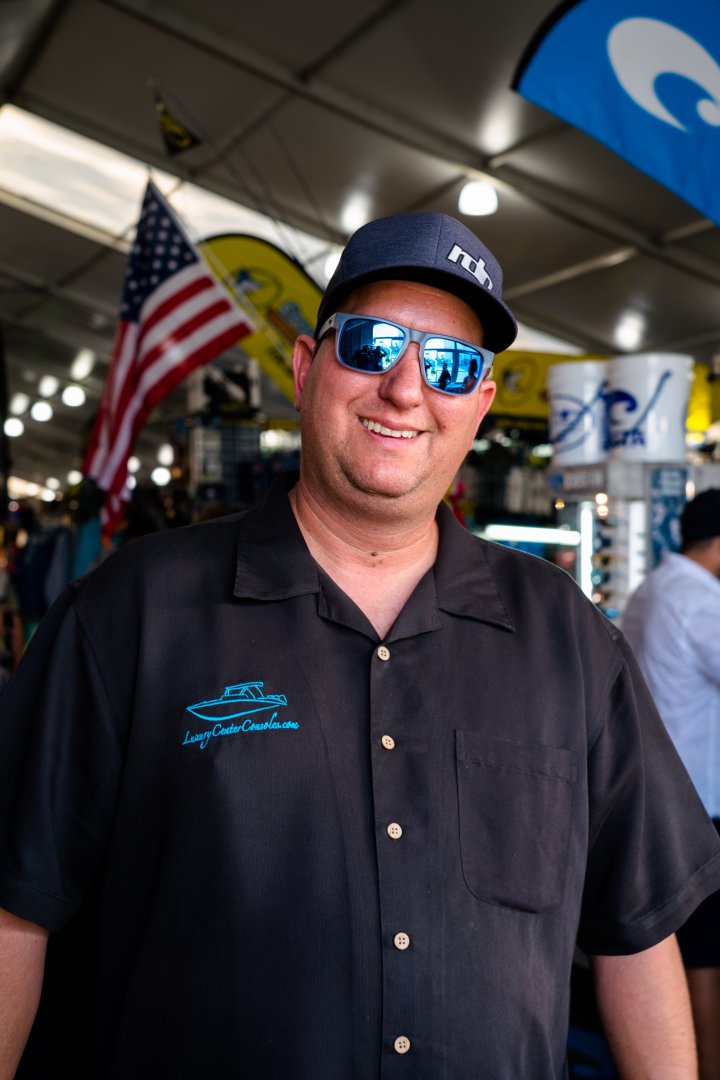 For starters, the NASCAR-esque Hardin Marine trailer returned to its initial 2016 outdoor corner setting, (before space constraints at the Key Biscayne location could no longer accommodate the rig). Most will recognize the familiar caravan crammed with copious amounts of high-performance gear and gadgets, from its annual pilgrimage to the Florida Powerboat Club Poker Run Village each November in Key West. 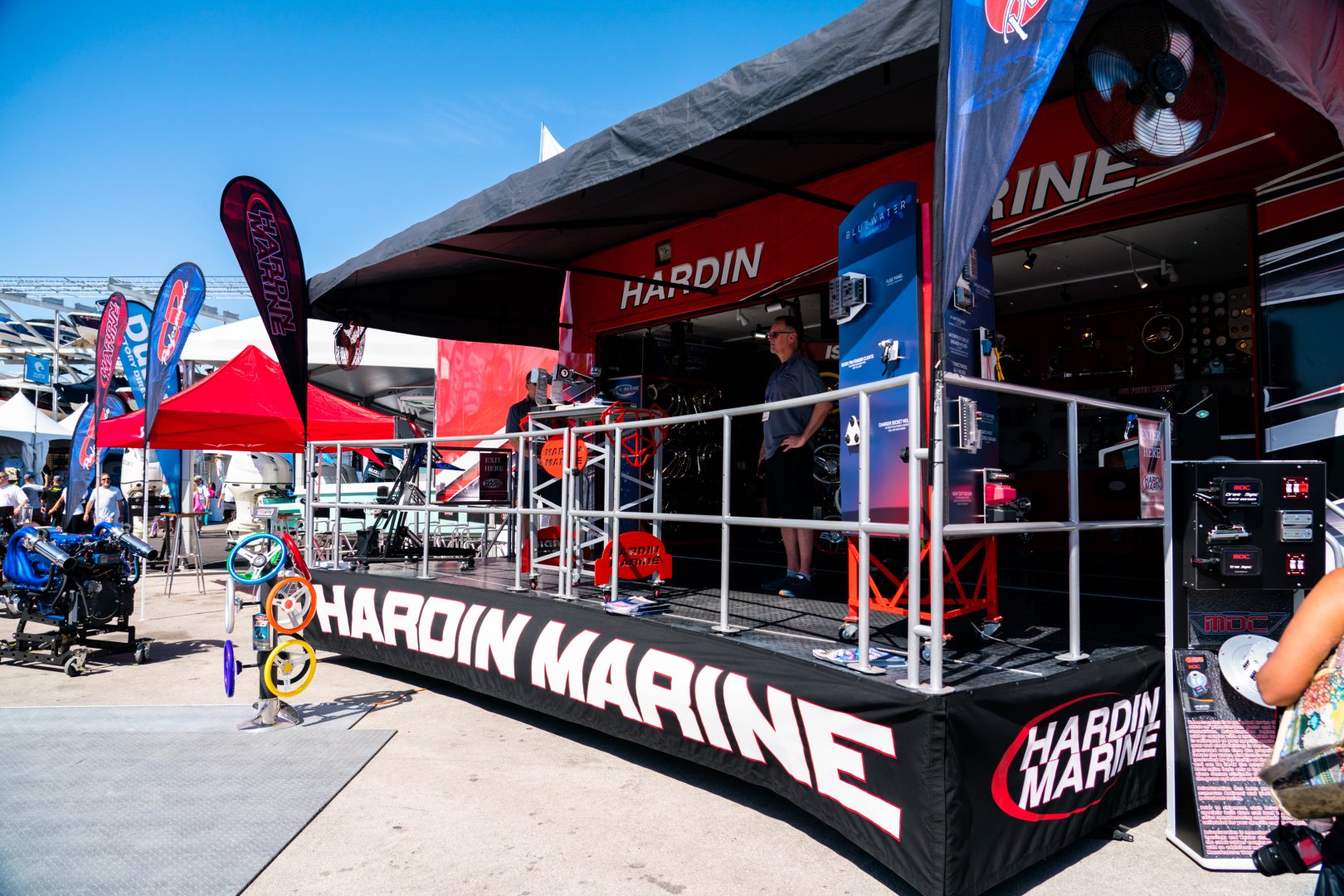 Hardware honcho, Jeff Stull from Hardin walked me through his best sellers up for grabs for the first time at the MIBS. Say hello to the Gen 7 PLUS sea pump ˗- both a game changer and money saver. Stull helped me to understand why, explaining "We came up with Gen 7 PLUS Sea Pump because over the years, Mercury was using smaller bearings that couldn't handle the work load and would eventually give out. The improved Gen 7 PLUS is 40 percent larger than the OEM stock Mercury pump, and more importantly includes dual seals and dual bearings."

He continued with, "The original design only had one seal, but we've followed that up with a second, so now when water gets past the first, the second seal prevents it from killing everything, before it completely gives out. That way you can get to it and correct it." Priced between $399 and $429, this investment guarantees a double safety measure, saving boat owners beaucoup bucks over the life of the boat. 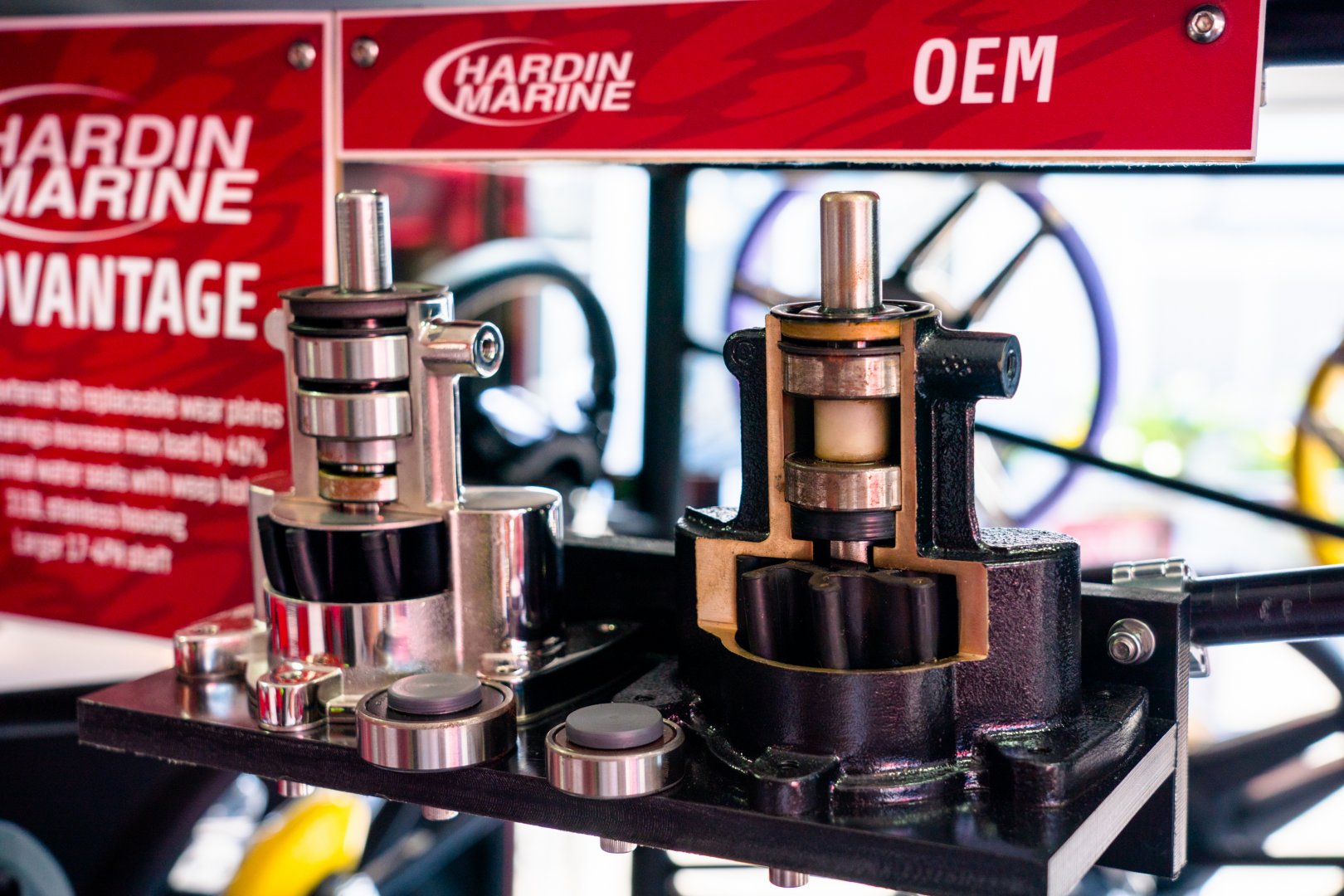 From stainless steel, the conversation brightened up when moving over one display panel to a special aftermarket accessory, now available in more colors than I have eye-shadows. Due to excessive grinding and wear and tear from outboards jack plates moving forward and backward, Hardin Marine put a literal spin on things... and introduced the swivel outboard hose connector, back in 2017.

An instant success, the swivels provide freedom allowing for 12 degrees of angle for hose and tube movement (and a water tight seal). Previously offered in only gray and black, in 2020 the color assortment looked toward the rainbow for inspiration. Noting an additional benefit, the expanded selection allows builders to work alongside end users in creating more eye-candy-styled sterns.

Not only did the color choices grow, so did hose and tube sizing. Yamaha reached out to Hardin in need of a larger diameter hose to fit their products, and today the connector assemblies are produced in two sizes to fit both a 2" ID and 2.5" OD hose. 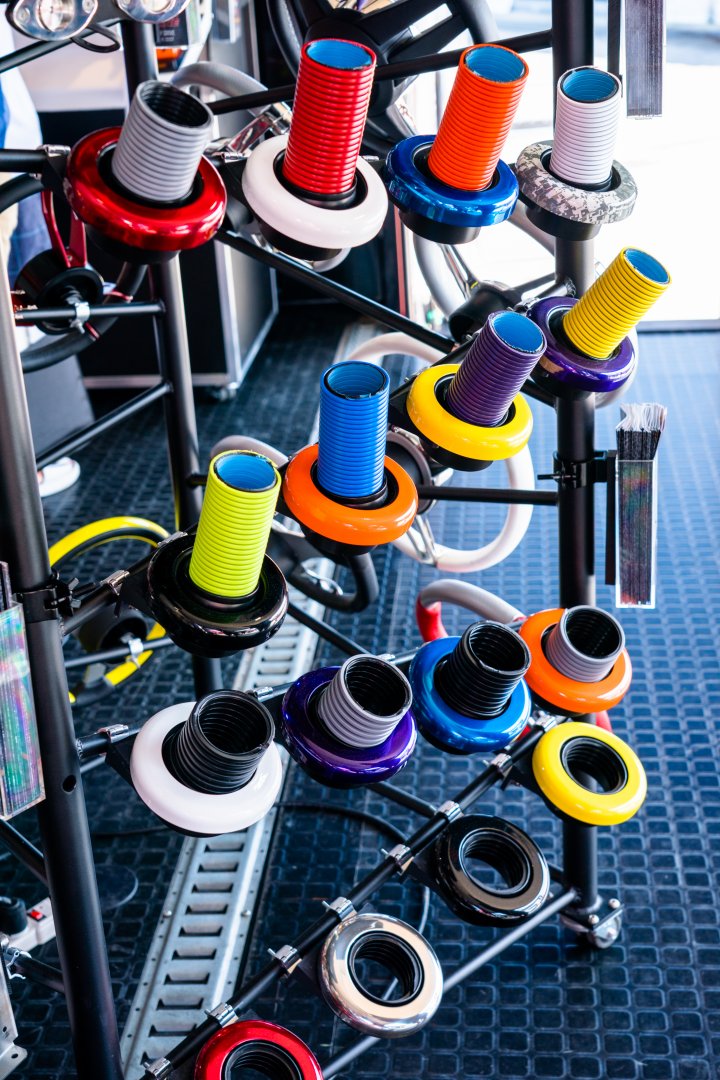 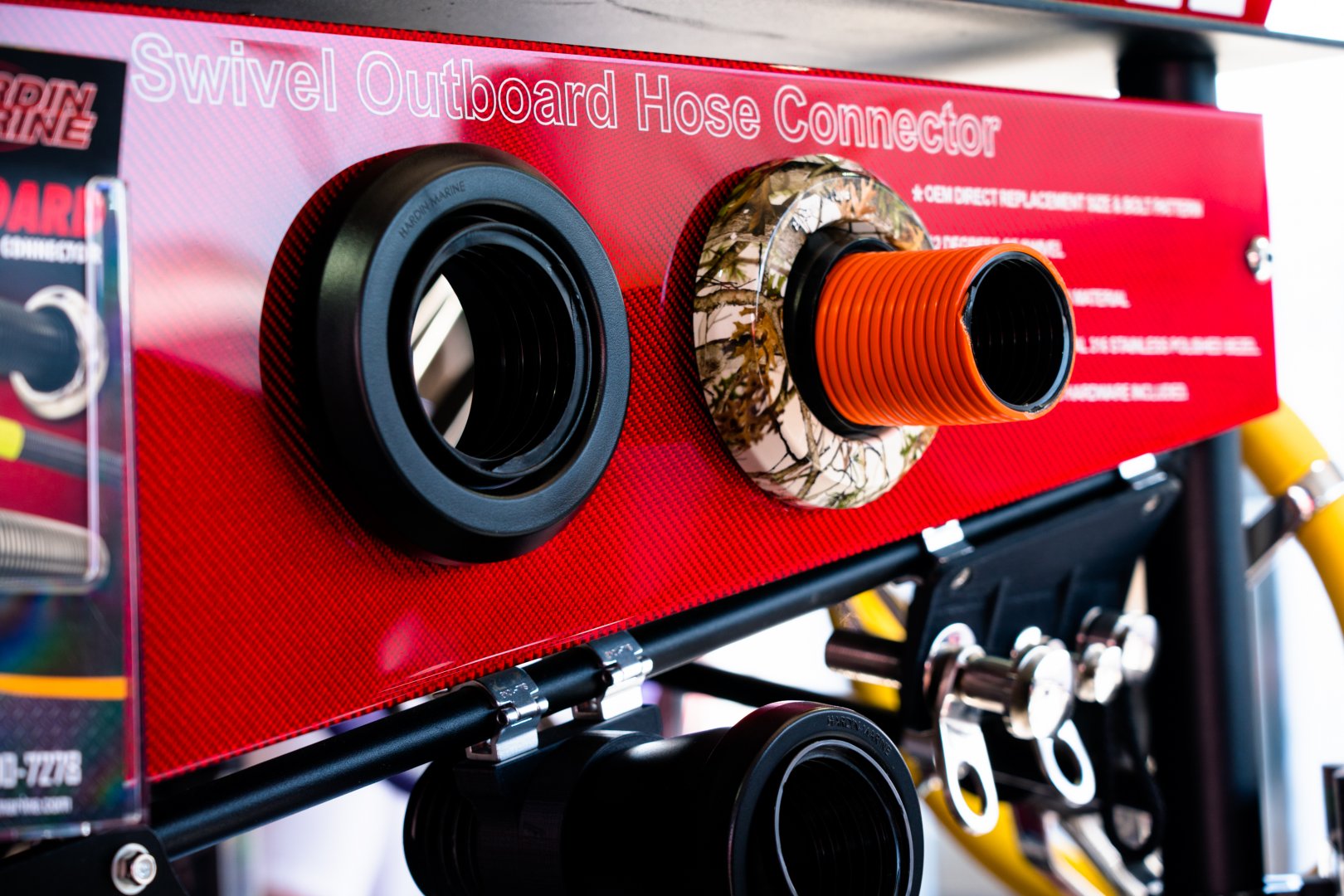 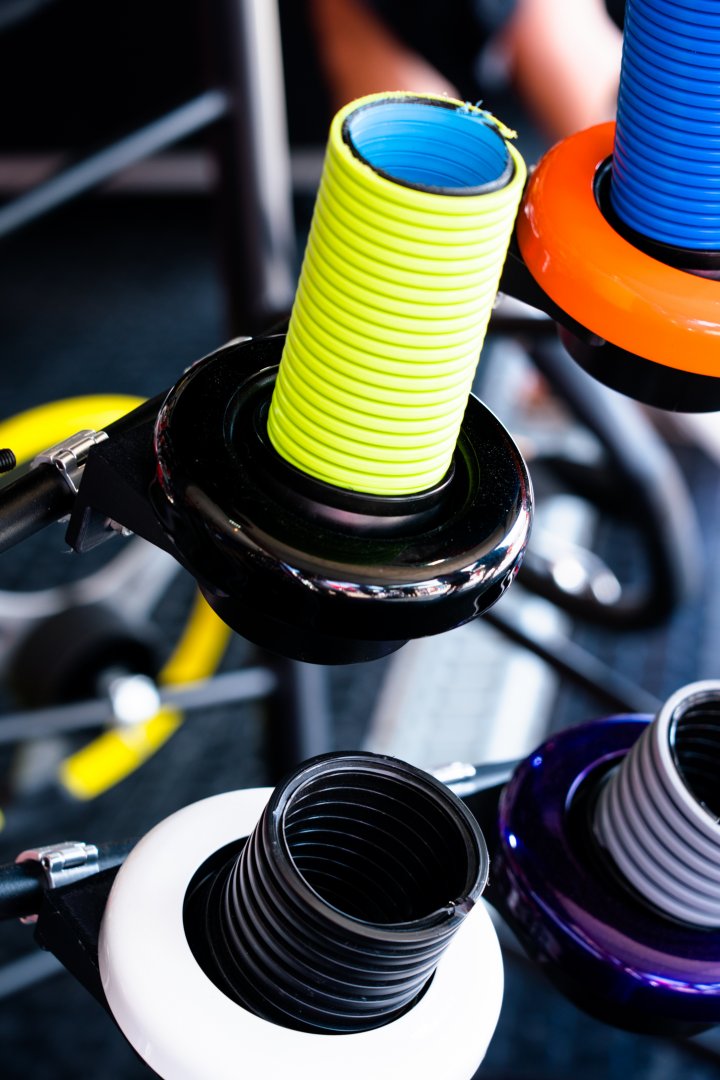 Marine Design Corp teamed up with the troops at the Hardin Marine hot-spot, presenting its TrimSync system (both sterndrive and outboard compatible), as well as the DriveGuardian. Gaining more and more popularity especially within the offshore racing community, the DriveGuardian is a patented torque-limiting clutch, fabricated to eliminate spikes in torque when a boat’s propellers re-enter the water after mashing a wave and grabbing some air. 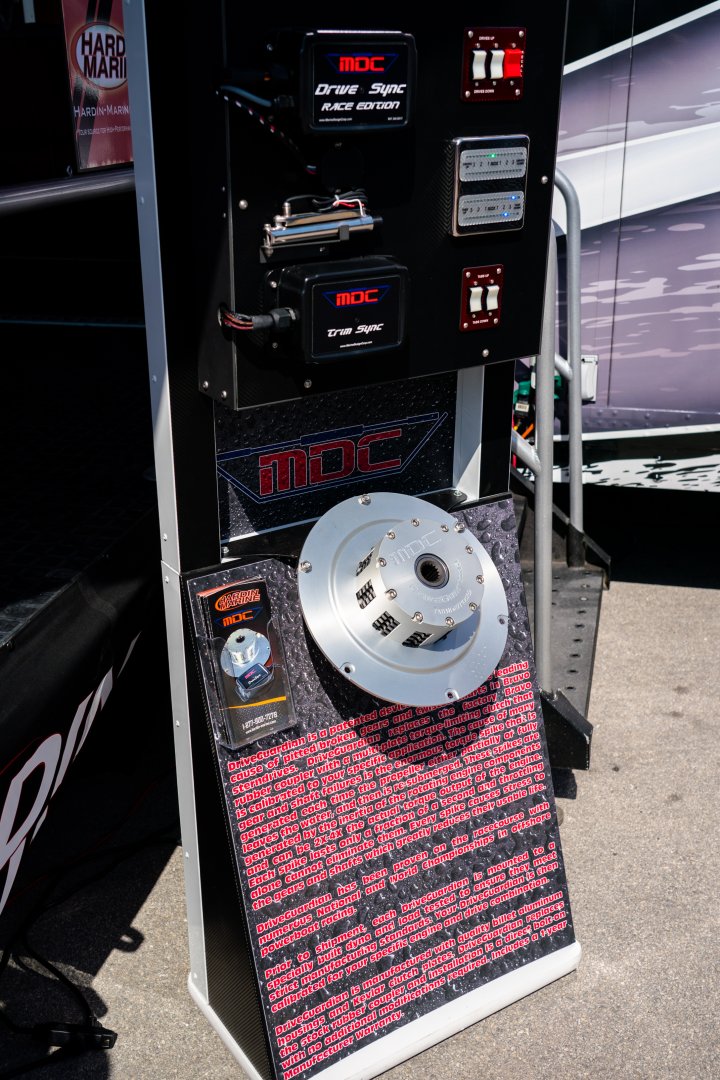 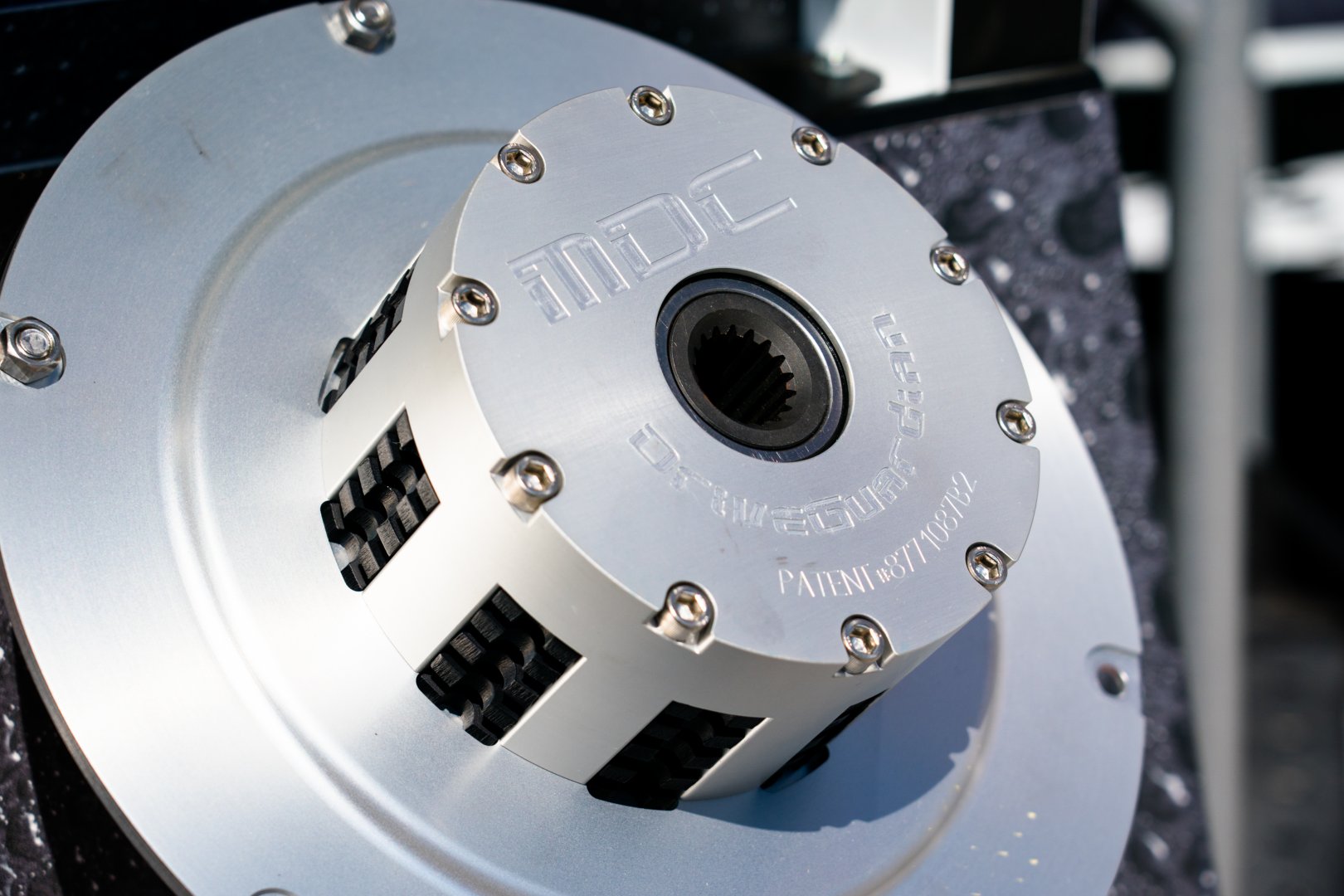 Speaking of air, since Miami was stickier than Saigon catching the kind generated indoors was next on the day's agenda. Wedging through the masses en route to the Mercury mega-booth in the engine pavilion, the boating bl- bl- bling bouncing off the display walls at Livorsi Marine stopped me in my tracks. Better yet, when I saw the owner Mike without a swarm of people cornering him for valuable product input or to say a quick hello, I knew it was time for me to toss out my "whatcha got new pitch".

After hearing about Livorsi Marine's 11 different models of trim tabs ranging for boat models from 20- to 60- feet, and the great deal of interest being generated over the LED dashboard indicator lights; it was Mike's enthusiasm centering around the fuel/water separator on the table in the middle of the exhibit that encouraged me to dig deeper.

Listed as part number FWS6BK, the fuel/water separator's key points include: it's been flow tested, is compatible with the Mercury 450Rs, is anodized and painted for superior corrosion resistance, comes with a reversible mounting bracket for tight quarters, and contains a manifold that can do either two or three engines and three tanks with shut-offs. 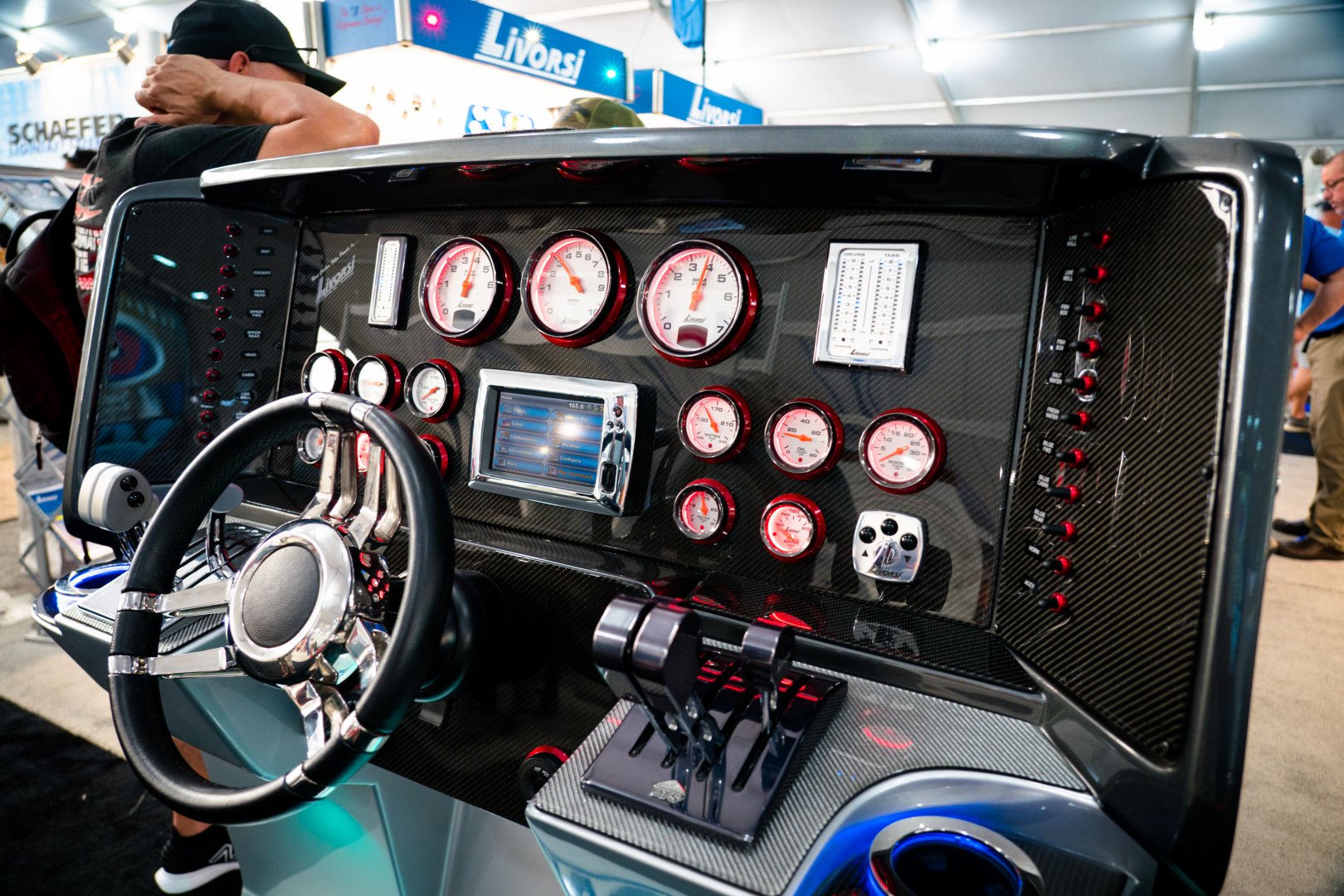 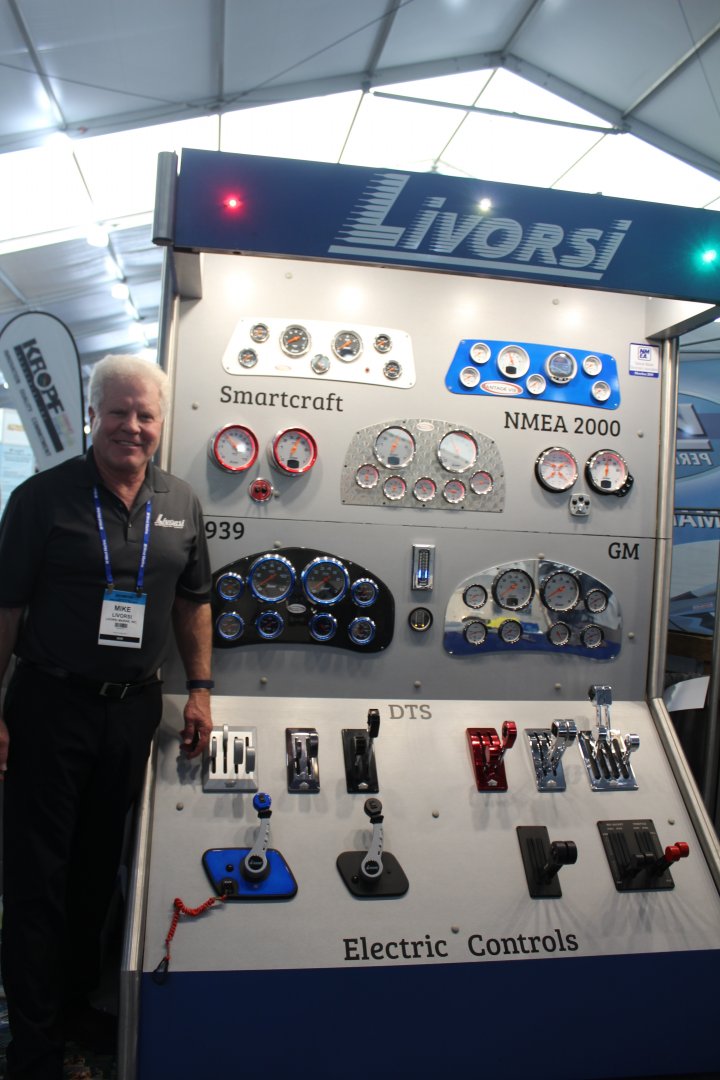 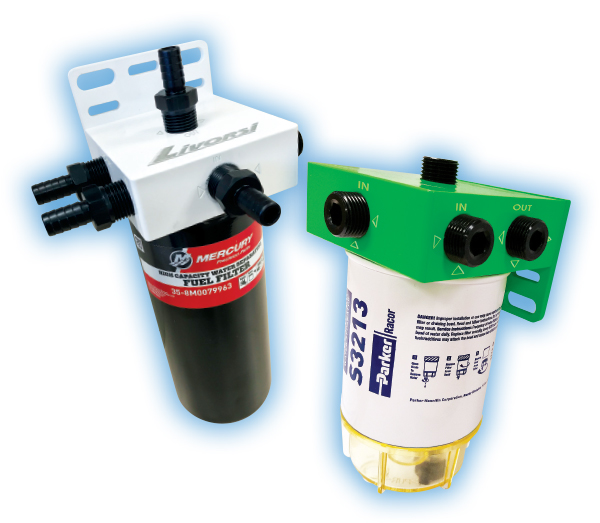 My 2020 MIBS marine-tech tutorial continued when I eventually reached the Mercury Racing monstrosity. General manager, Stuart Halley was my next go-to gentleman, since to be quite honest, I didn't know what the gods at Mercury could do to top the 450R heavenly release. Halley introduced me to the 60R, geared towards the skiff market for the extreme angler who stalks fish in skinny waters.

Optimized for tremendous hole-shot speed and on-plane performance, the 60R inherited its mid section from Mercury Racing's 60R hp race-proven, international competition engine. To amplify acceleration, the team increased RPM from 6000 to 6300, married a 2.33 gear ratio high-thrust gearcase to the engine, and crafted a special propeller.

Incredible boat handling and stability is derived from the lowered center of gravity and not only does the 60R slowly chug 87-octane, it can even accommodate a lower poling platform which eliminates the need for a jack plate or flared transom. Halley also pointed out the 60Rs ability to put a consumer spin on things with the sexy graphics. What exactly did he mean? In two words...subliminal brainwashing. Just look, the "60" next to racing reads more like GO Racing. True that! 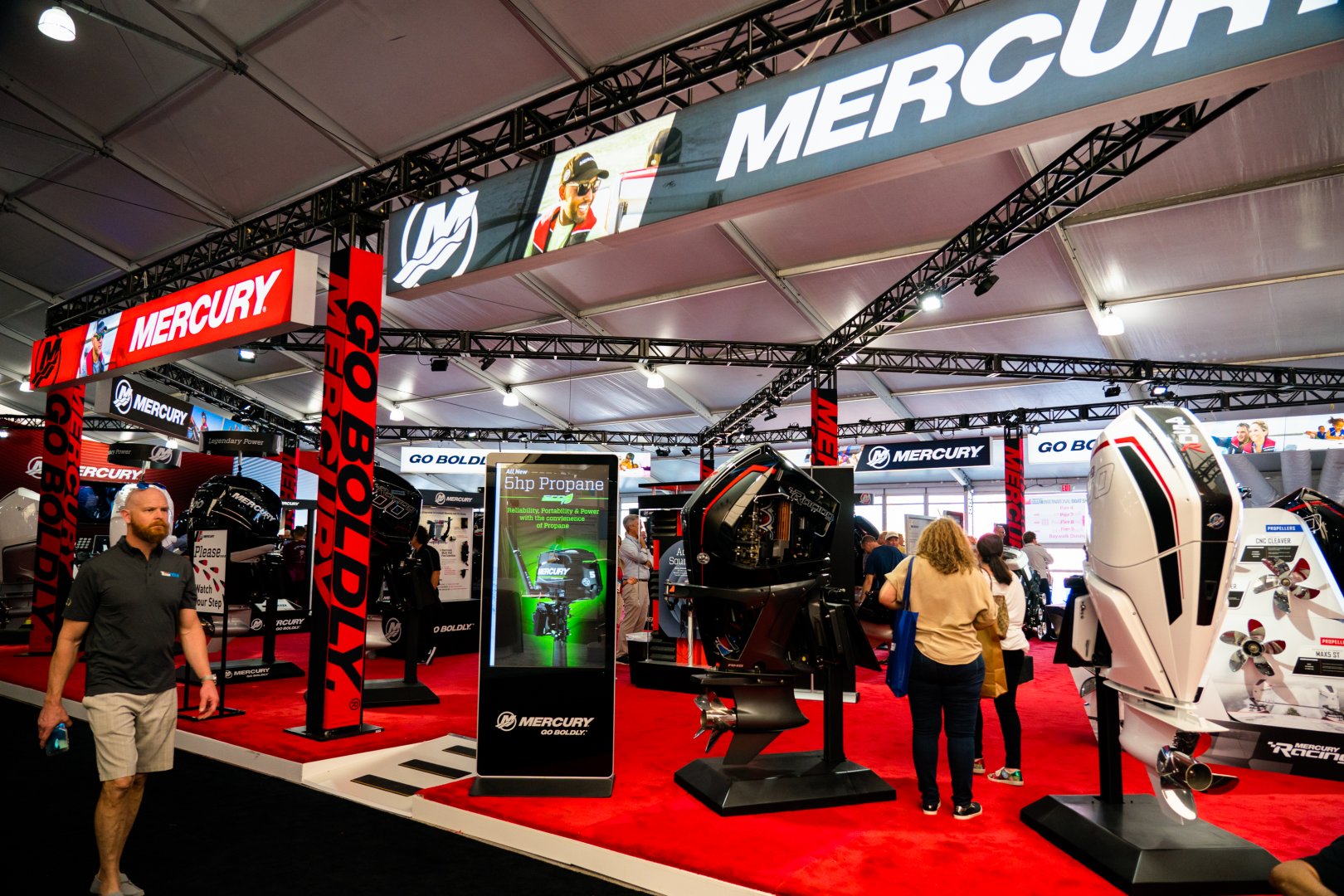 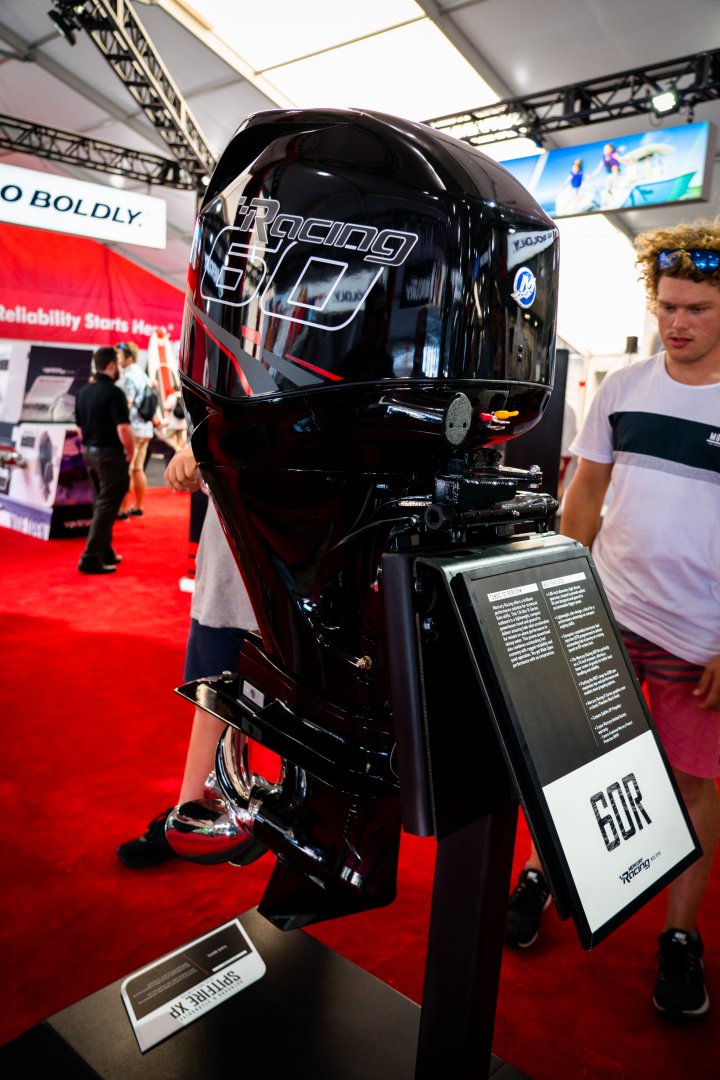 In finishing my grand tour de Mercury, I was summoned over to the Mercury 3.0 diesel outboard. While it contains the same good stuff within, the outer cowl has been re-branded. The repositioning had much to do with the government target market, and the DSI (Diesel Spark Ignited) graphic was removed because people didn’t want to buy a commercial engine with racing broadcast across the sides. 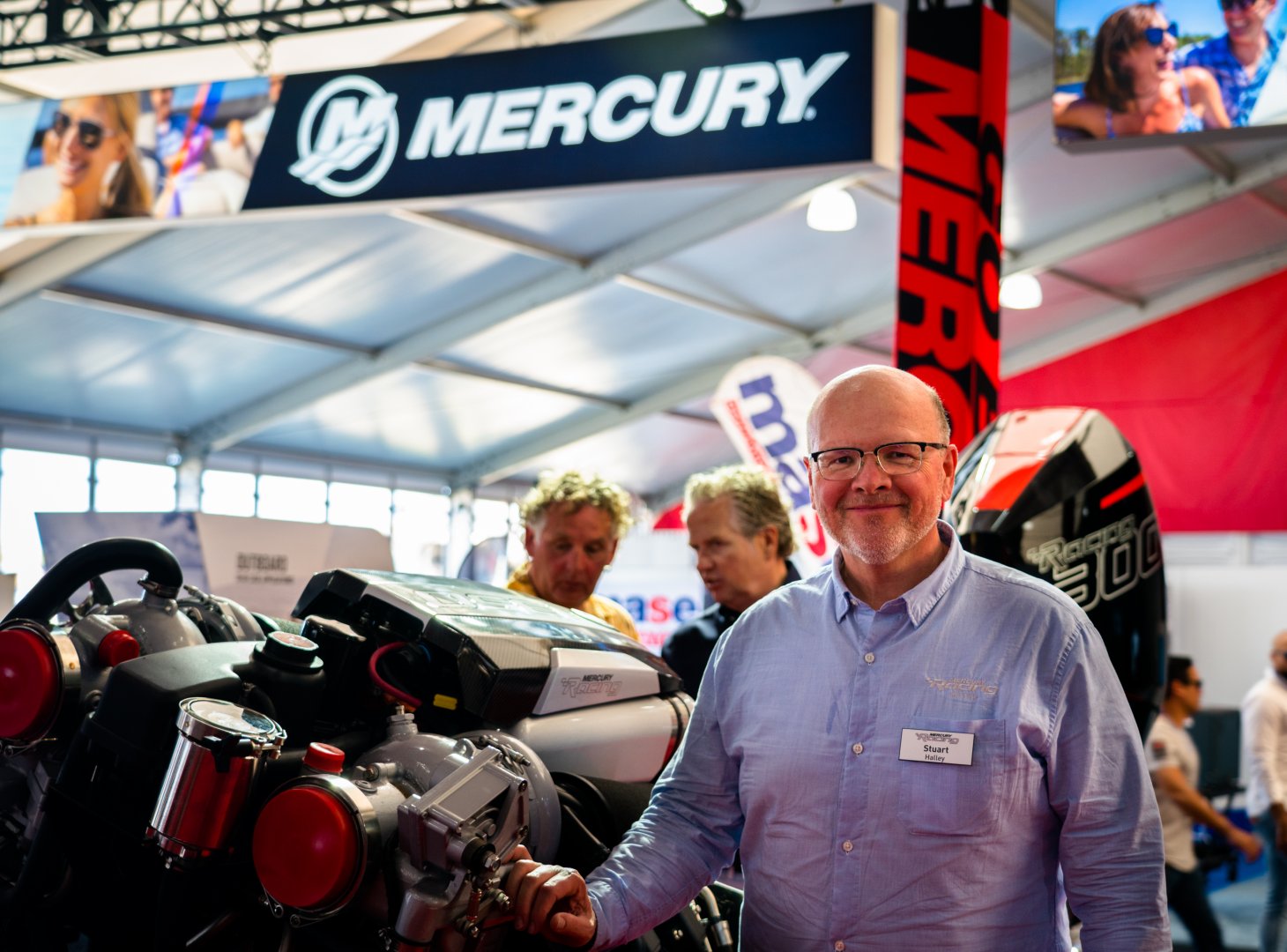 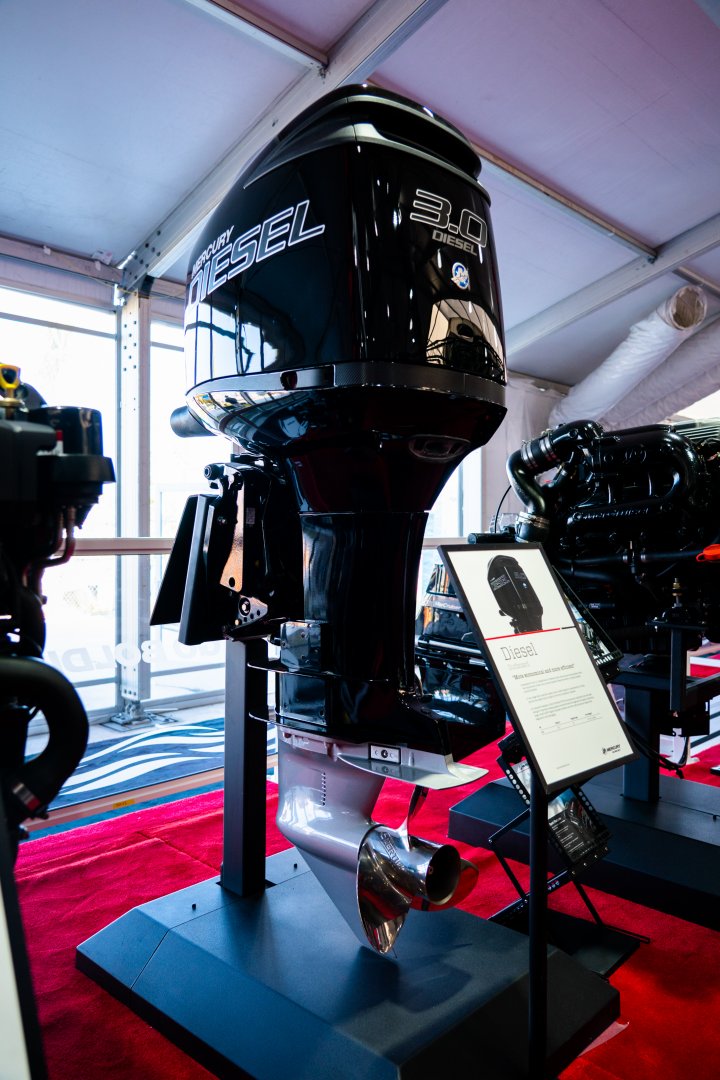 Besides conversing with legends like Livorsi and Halley in the marine industry, I love this show because of the new faces and talent I meet. Take for instance, Tom Hamami and his wife Patricia who were casually sitting on the rear bench of an immaculate Intrepid 475 Panacea, just a matter of feet from the chair I chose to plop down on. Being that I am a MAGA die-heard, immediately "flagging" my attention was the gallantly hoisted flag fixture above them on top of the Intrepid; which sparked my curiosity propelling me to ask about it.

Turns out Hamami owns both the white-as-snow Intrepid and fast-flag.com, the recently-established business which fabricates the solid aluminum flags. Luxurycenterconsoles.com is preparing a special story on the background behind the build process and craftsmanship of the flags, but I was anxious for everyone to sneak a peek at these beautiful and indestructible marine grade painted and powder-coated USA flags... that truly add to and elevate the classy and polished look of any watercraft. 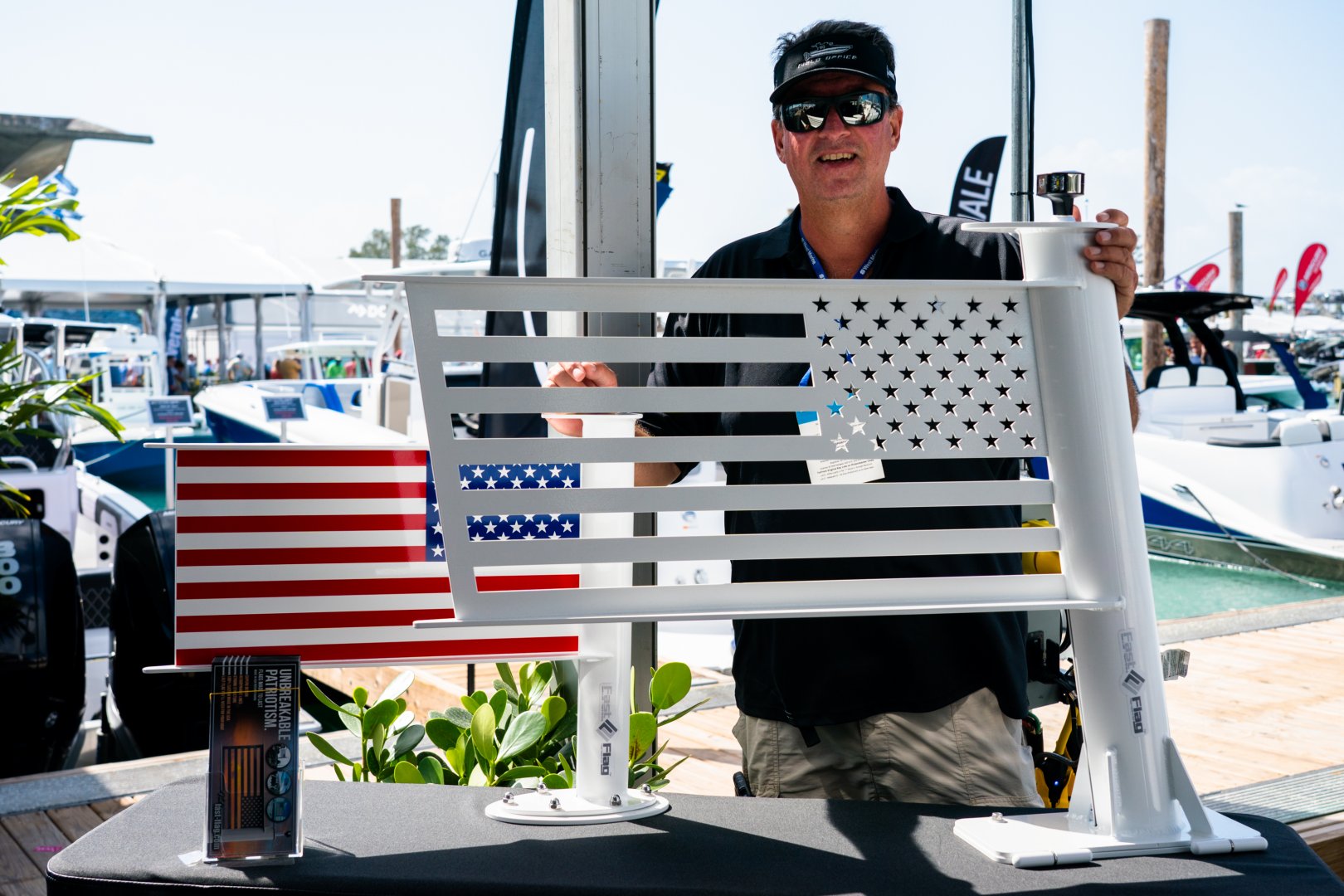 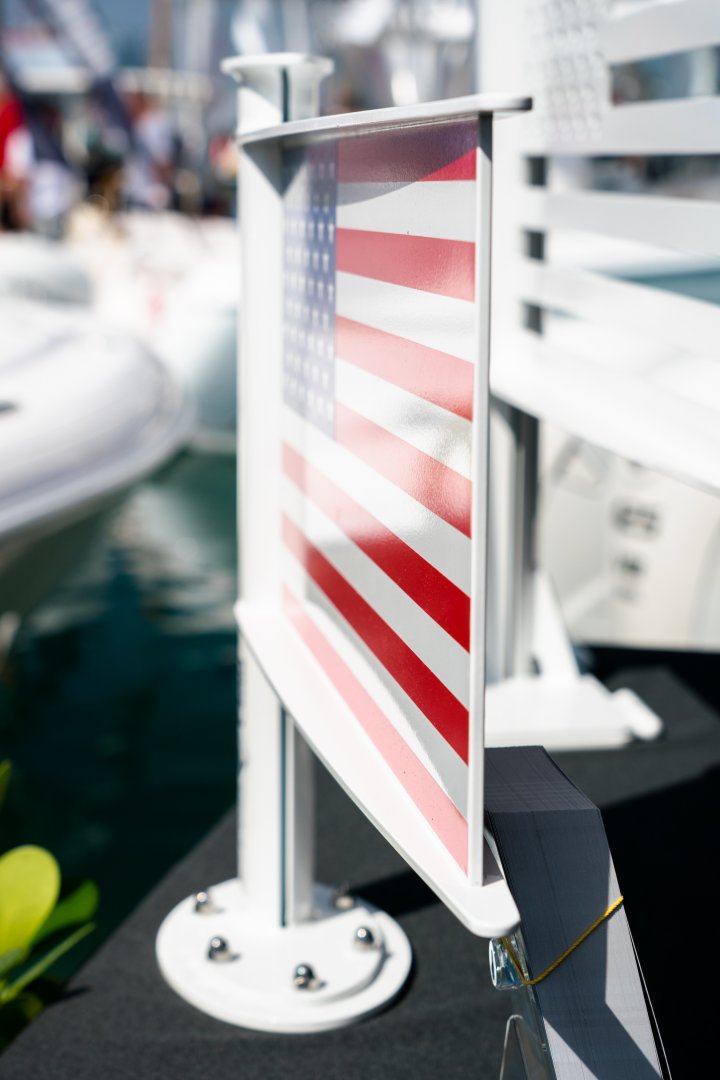 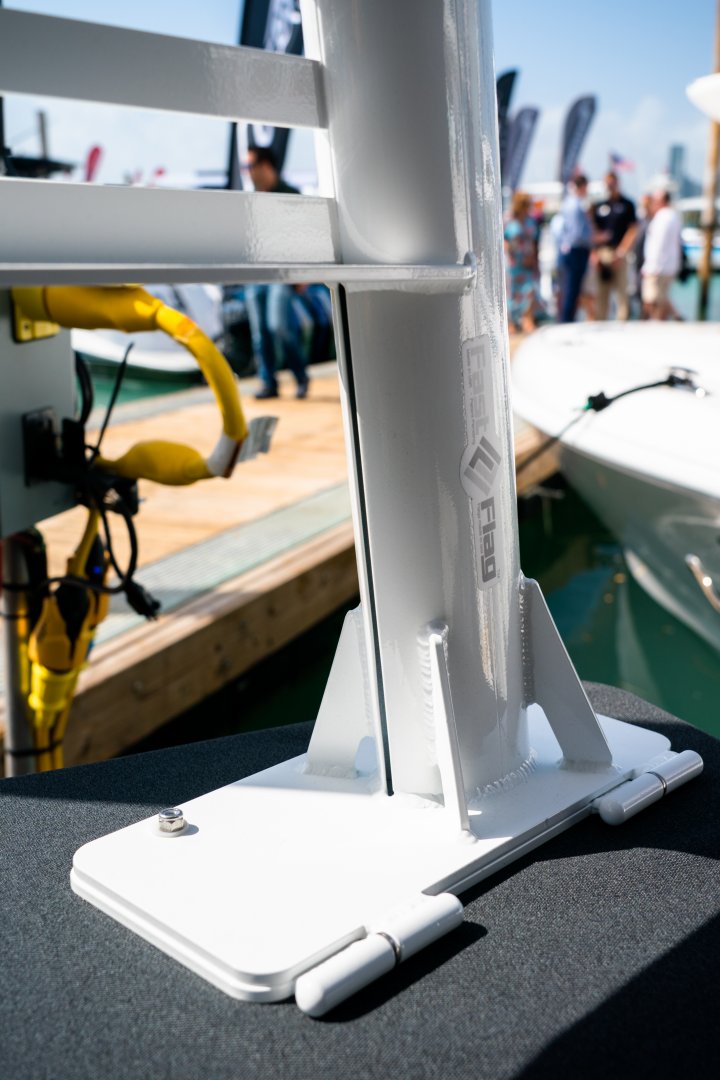 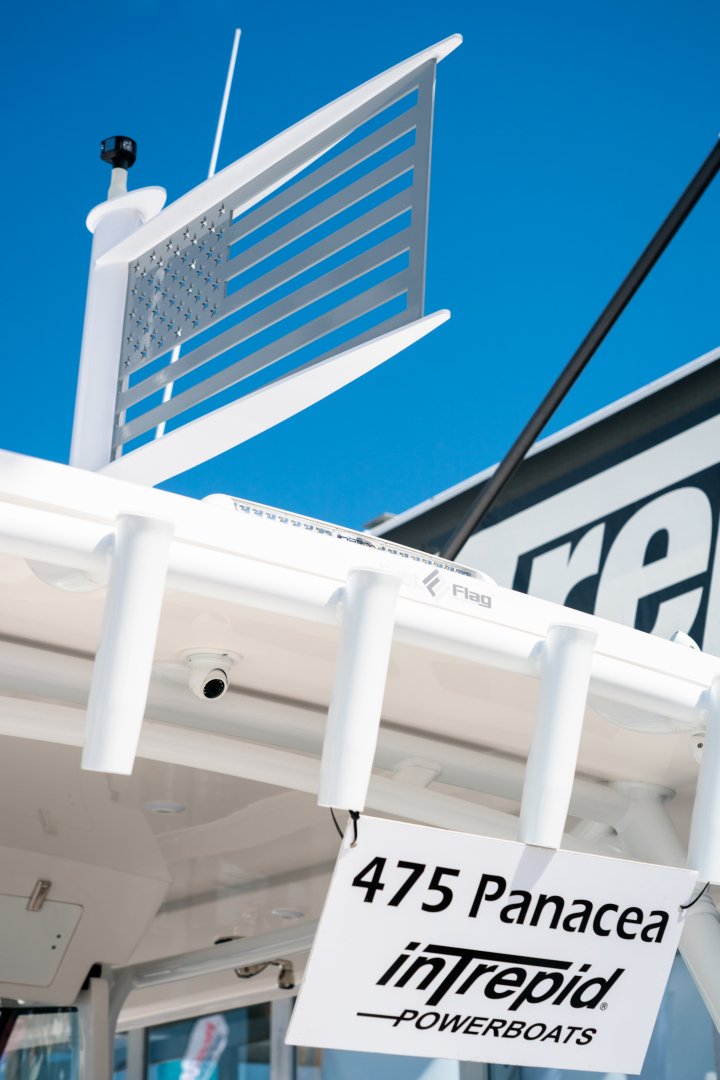 And channeling Americans' passion for patriotism into patronage for a powerful cause, RDP wraps up its 2020 Miami Show coverage by calling attention to... the fight against breast cancer. Under the media direction of PR Power's Marilyn DeMartini, KICKER Marine Audio teamed up with Reef Runner Boats as a key sponsor in the manufacturer's "Battle Breast Cancer Giveaway".

The charitable fundraiser featured $25 ticket donations that went towards winning the Reef Runner 230 open fishing boat on display at the show entrance in space D-50. Valued at $85,000, the lucky winner was chosen in a drawing on the final day of the show; and funds raised benefited breast cancer research for the Susan G. Komen Miami/Fort Lauderdale organization. Additional sponsors including Evinrude, TACO Marine, SeaDek and Epson, joined KICKER MARINE Audio which donated a $4,000 sound system. 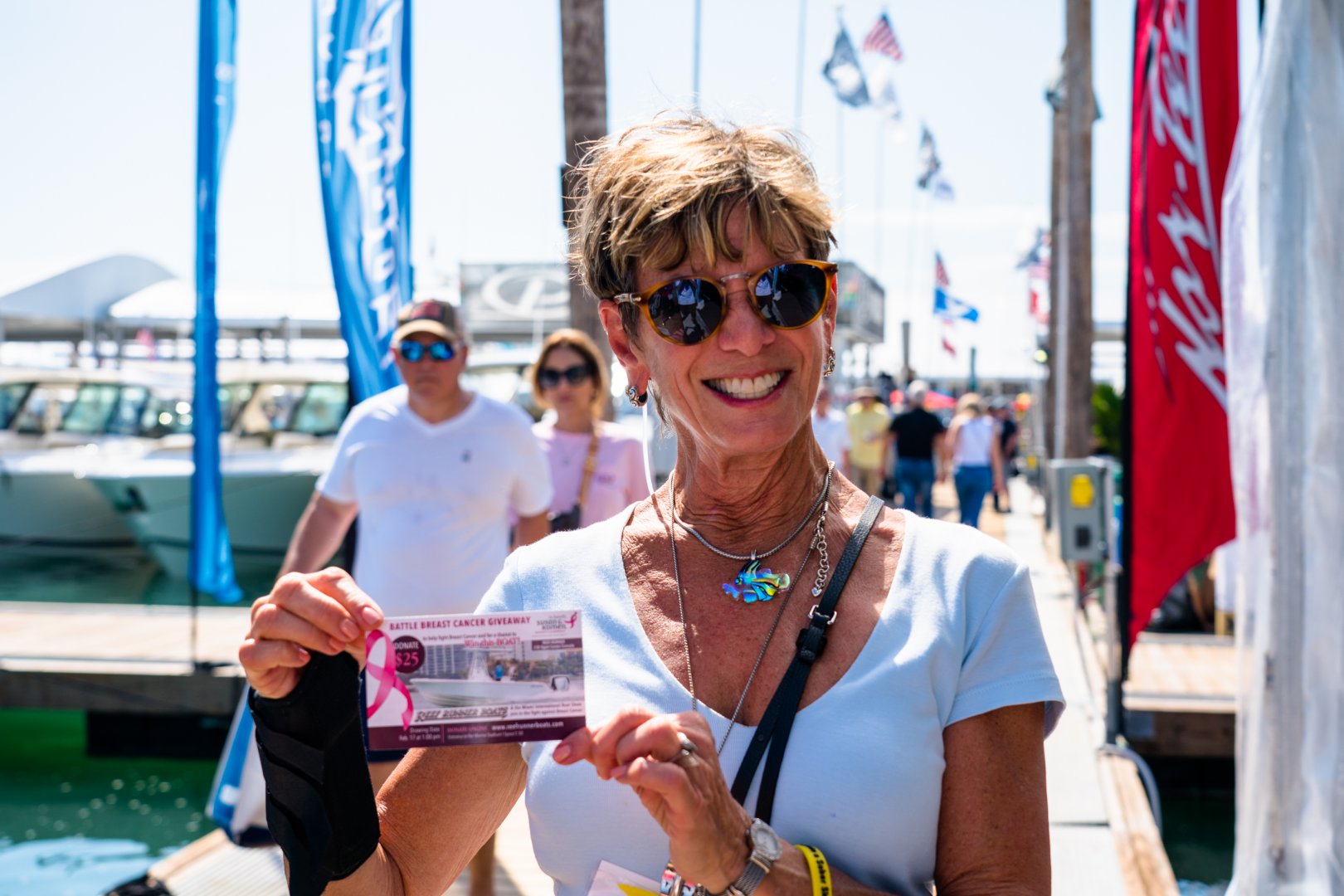 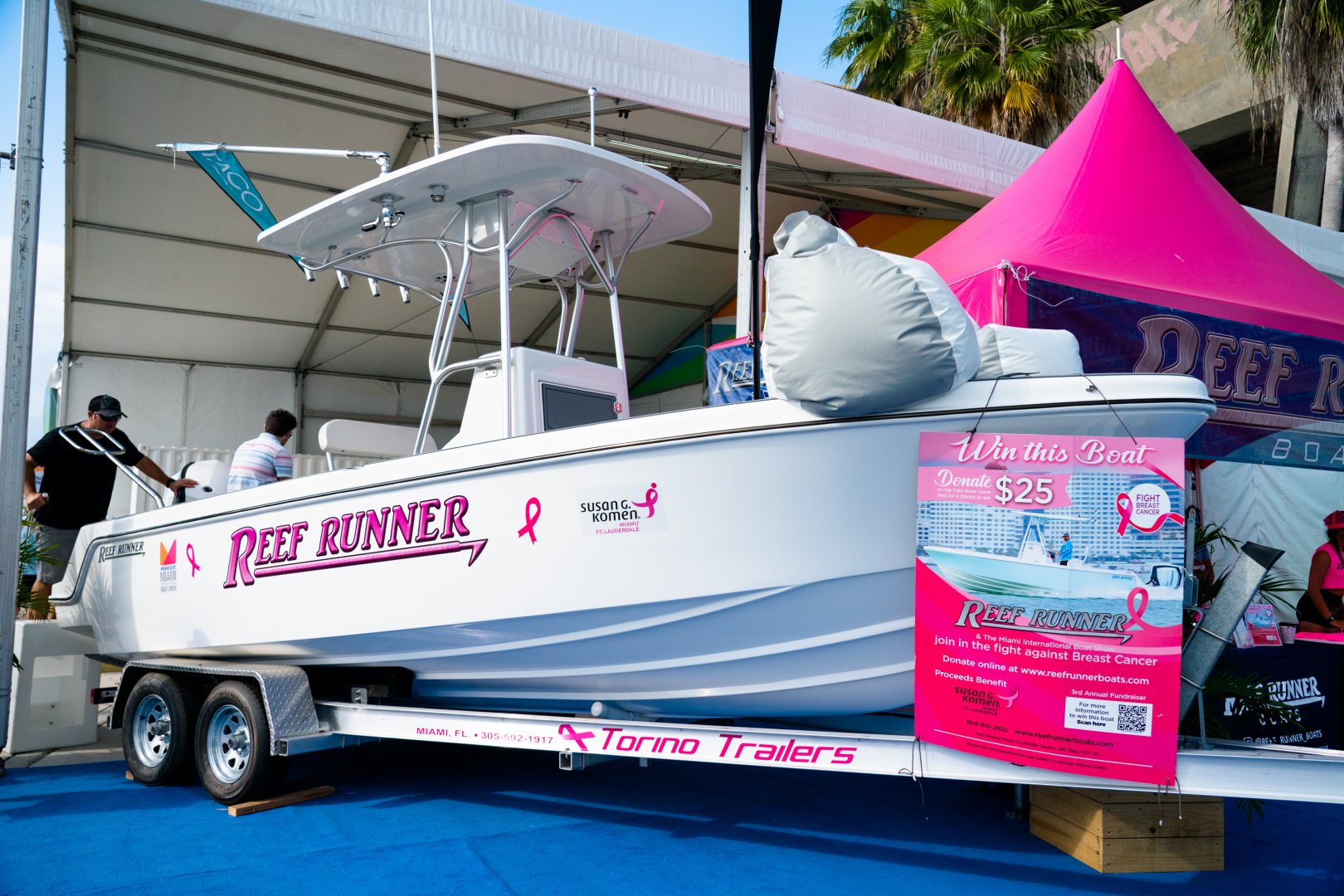 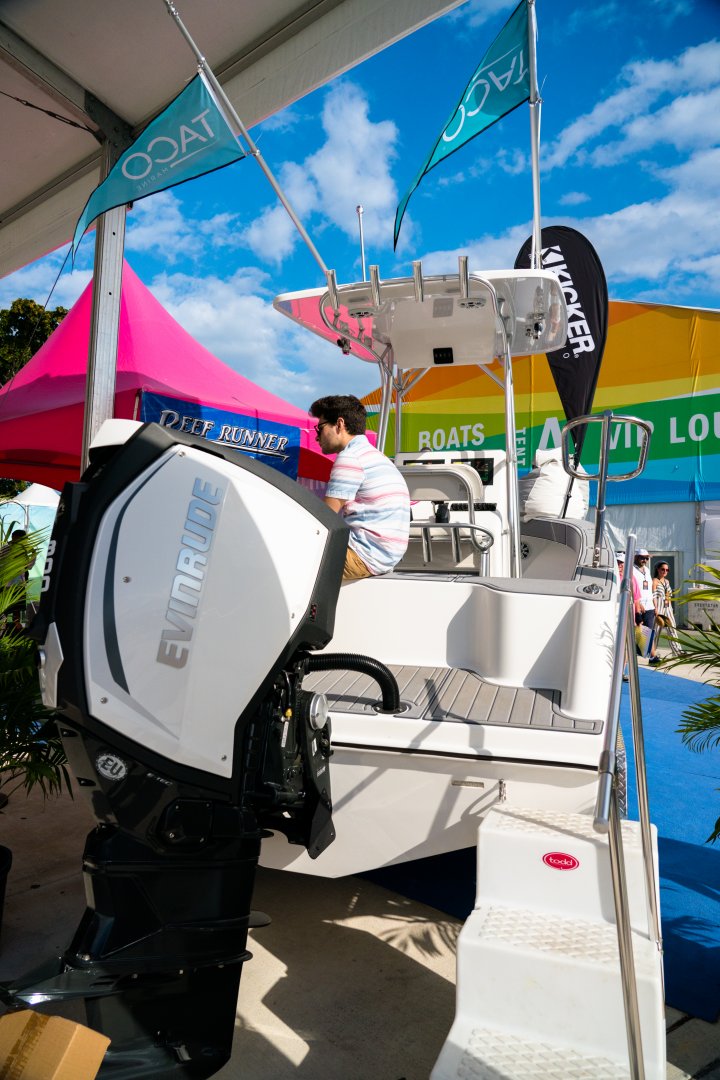 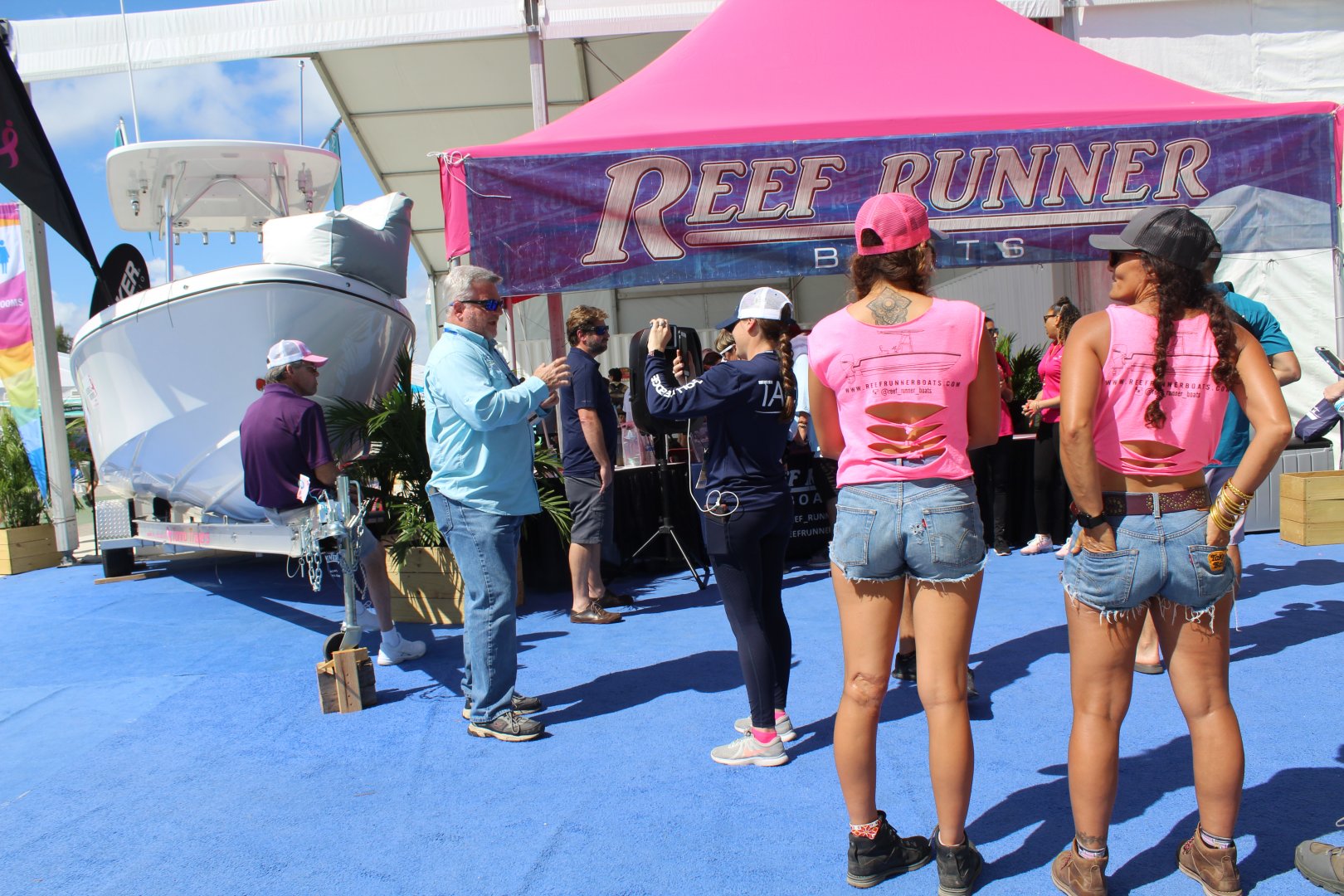 See you soon from the Palm Beach International Boat Show 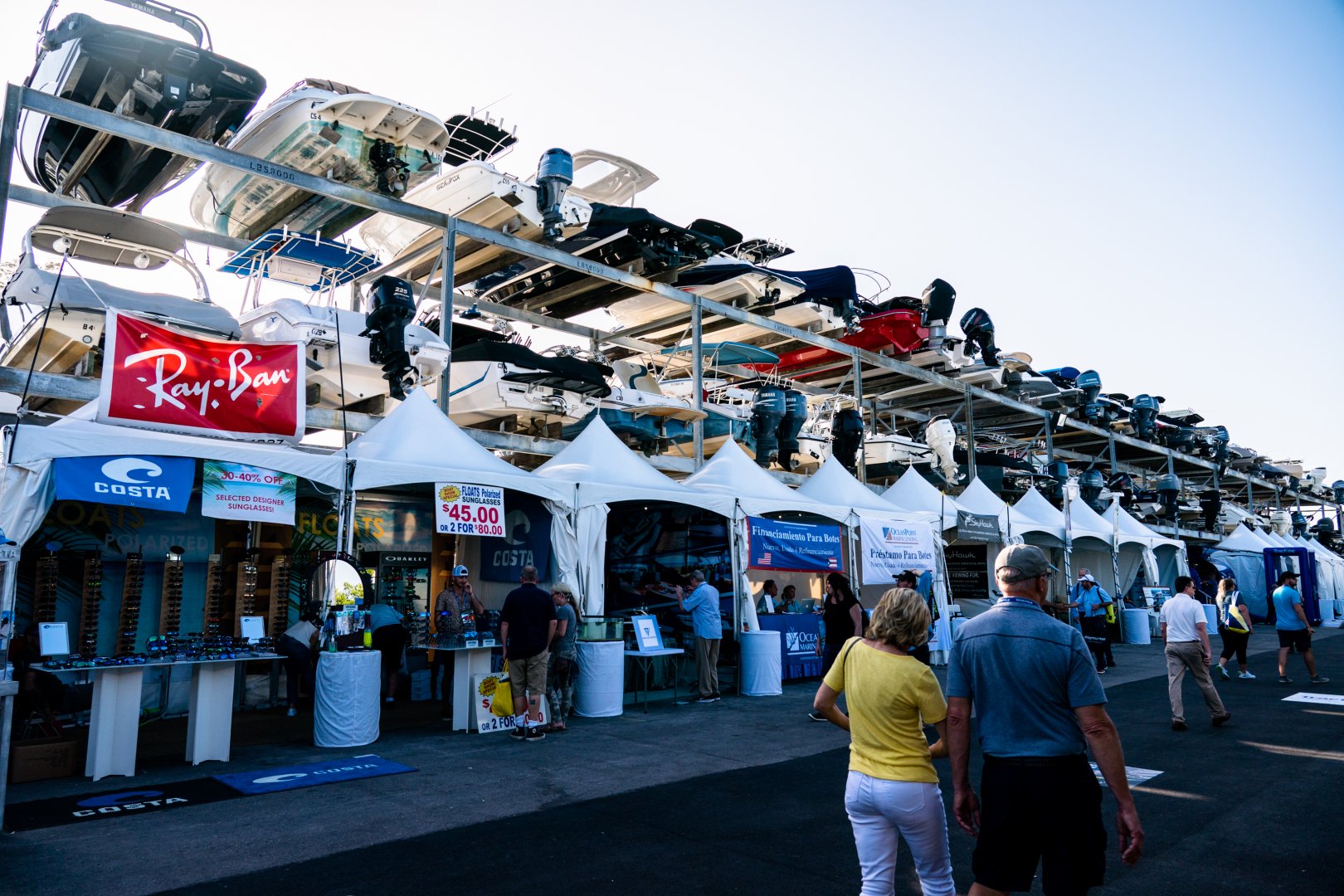 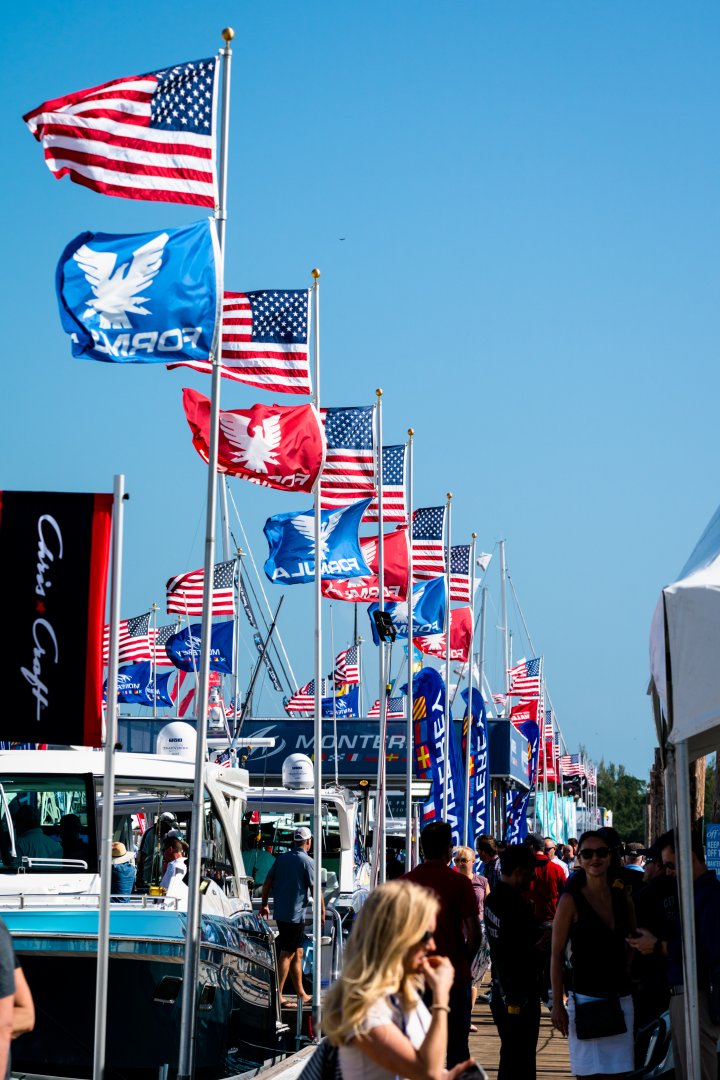 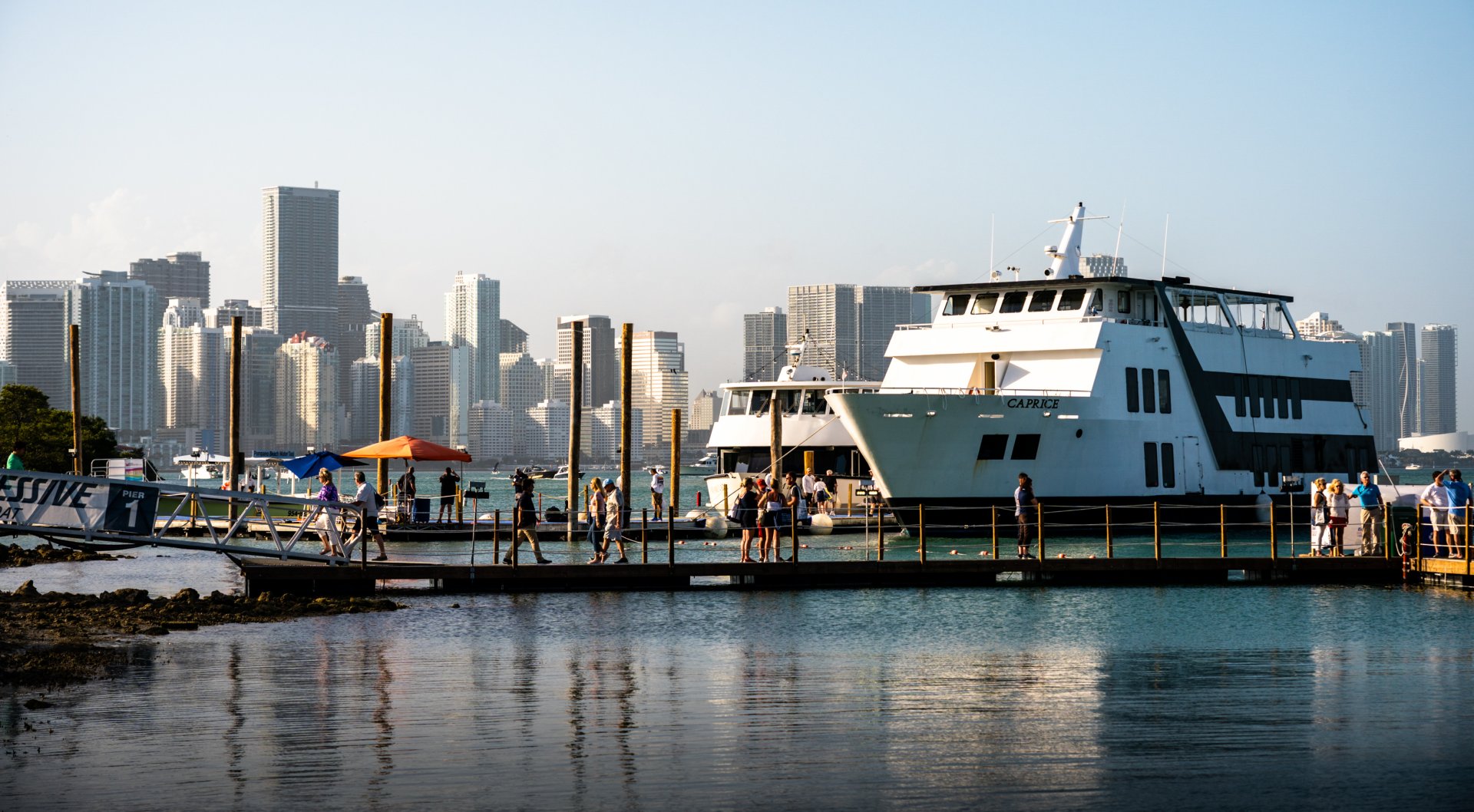 essay pro
Wow, I envy you mate! I always wanted to visit this boat show, but I do not have any free time. I work at the website for academic writing and this is a professional assignment writing service-assignmentjunkie.co.uk where hundreds of students looking for assignments from experts. I have a lot of job to do and I can not visit such festivals and shows. What a pity.
Hello guys! I wanna share a swot analysis essay. I am a student of a marketing faculty. I write a lot of essays. This is great opportunity to enhance my skills and knowledge.
For students I can give advice for their homework, a great help in writing essays are essay writer cheap the best team in this field. Their knowledge is the basis of their work and the proof can be seen in their unique essays and with wonderful content.
You must log in or register to reply here.