Article Gallery
Eliminator recently delivered this 25 Speedster and we happened to be down at the Launch Ramp when they were delivering it. The boat belongs to Stephen Sink whom hails from Chicago IL! Stephen told us there isn't a lot of "Performance Boats" up where he is at, but he along with a few friends own them and are always running the local rivers and waterways. 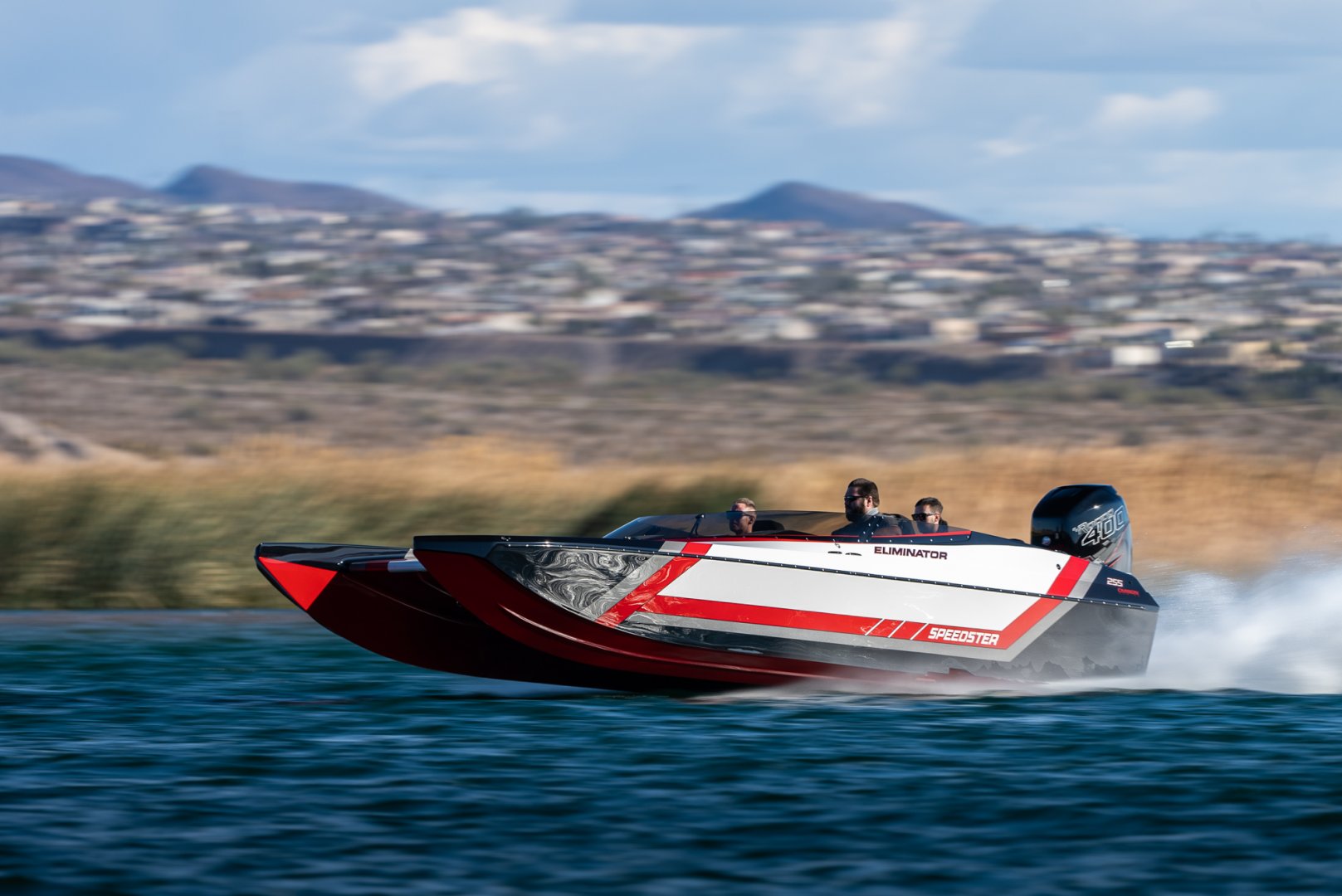 The boat is a "Carbon Series" built with Balsa Structure, Kevlar hull, rigged with a Mercury 400R mounted to a Porta Products JackPlate. Delivered with a 30 Inch Mercury Racing Cleaver!. Put all that together and you have a first class 25' boat that runs over 90 mph reliably! 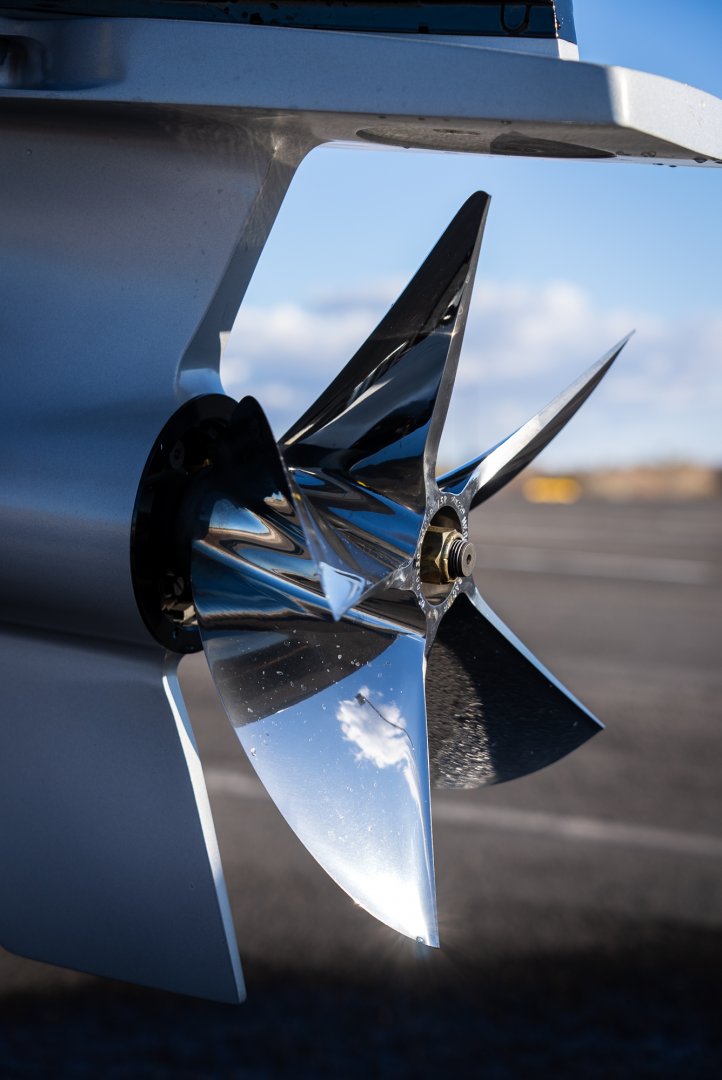 Here the boat is going on the delivery with the new owner. Less than optimal conditions with the wind blowing 20'ish mph at the time. After they felt the boat out for a minute though and crept the speeds up where the hull was packing air, it handled the lake chop with ease. 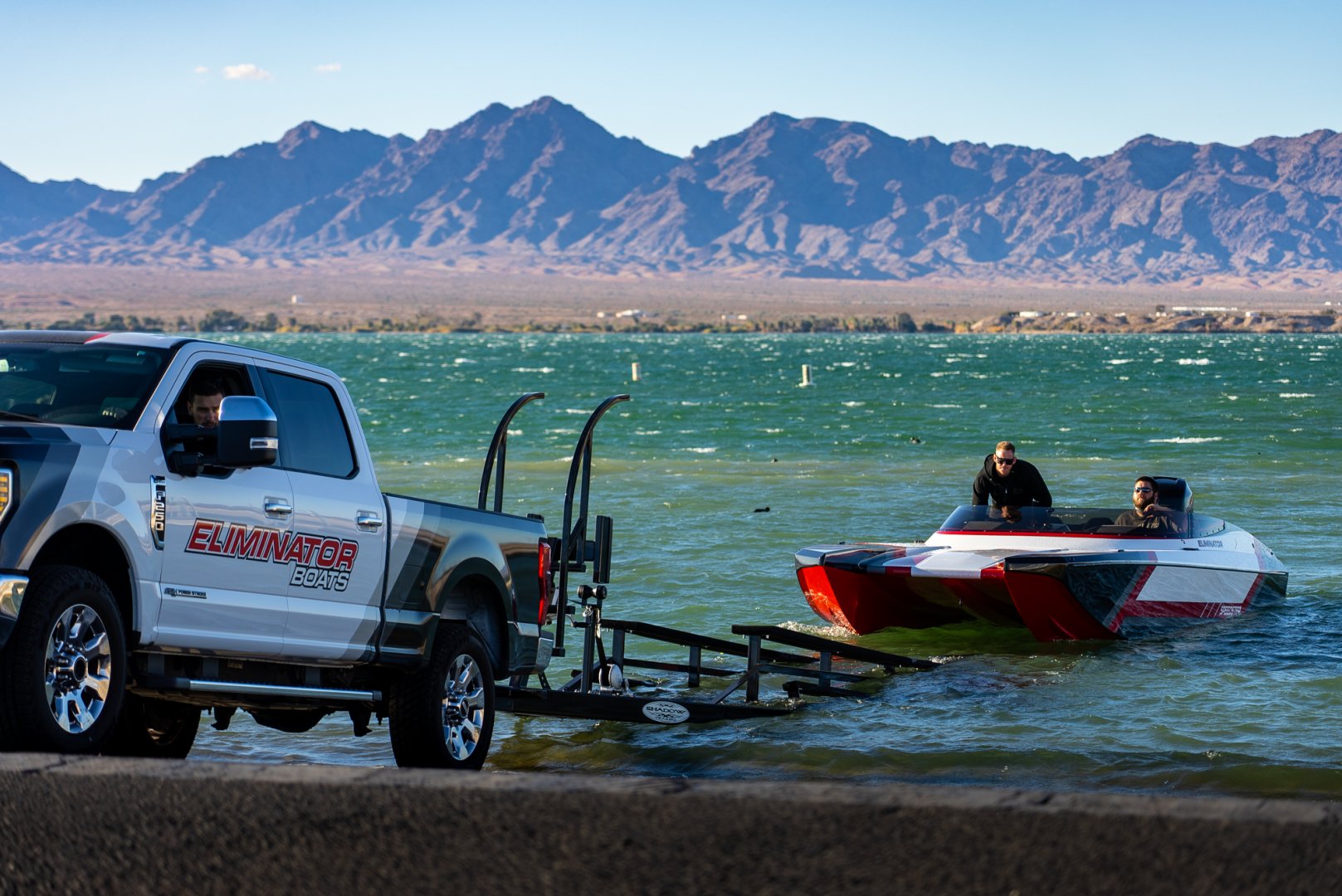 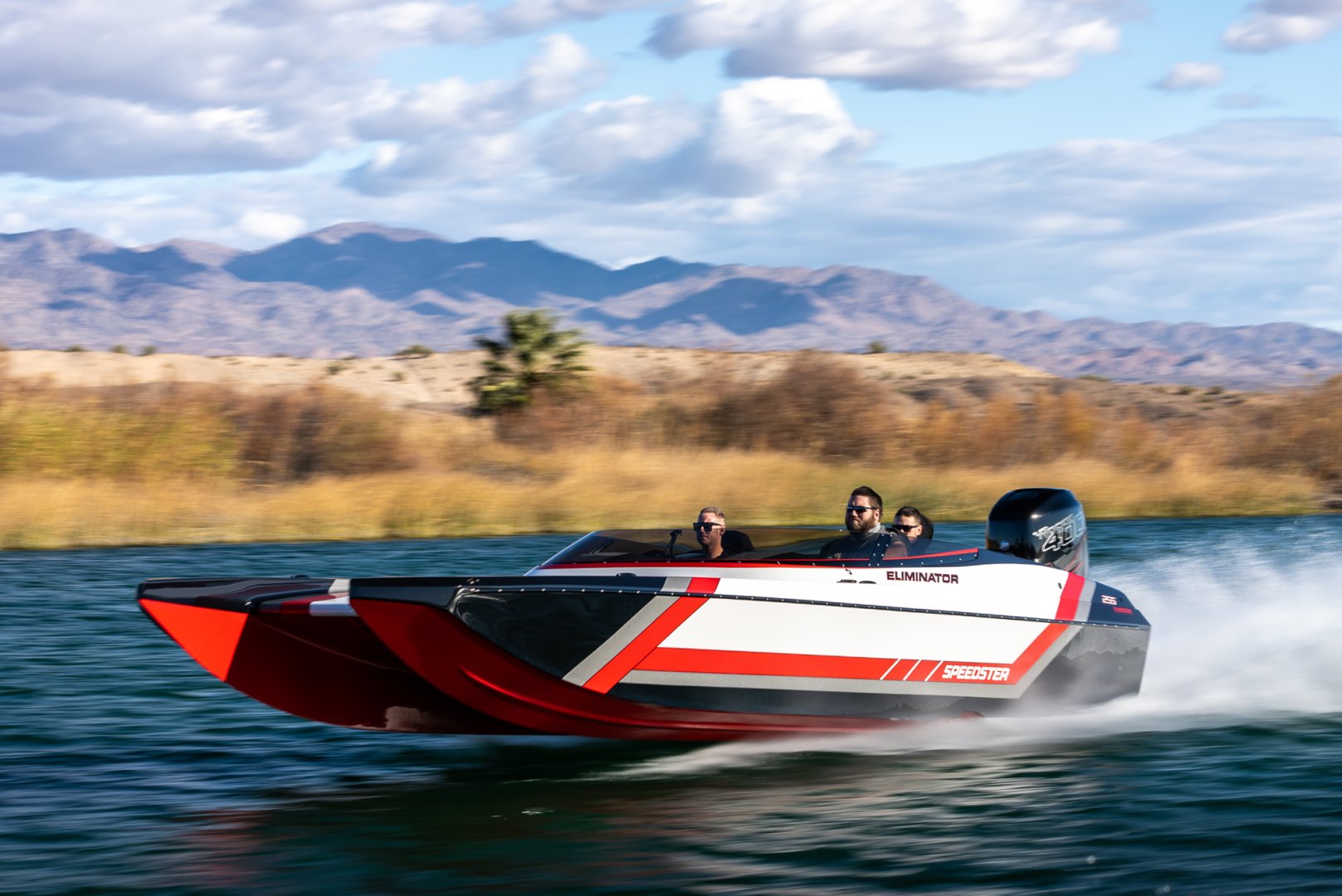 Taking a look at the "details" of the boat it's fairly obvious that eliminator has really been stepping up their game as of late. Most evident is the beautiful switch panels that they have custom made to make the most of the "industrial design" of the boat. They tied in the angular details into the billet and it really flows nicely throughout. 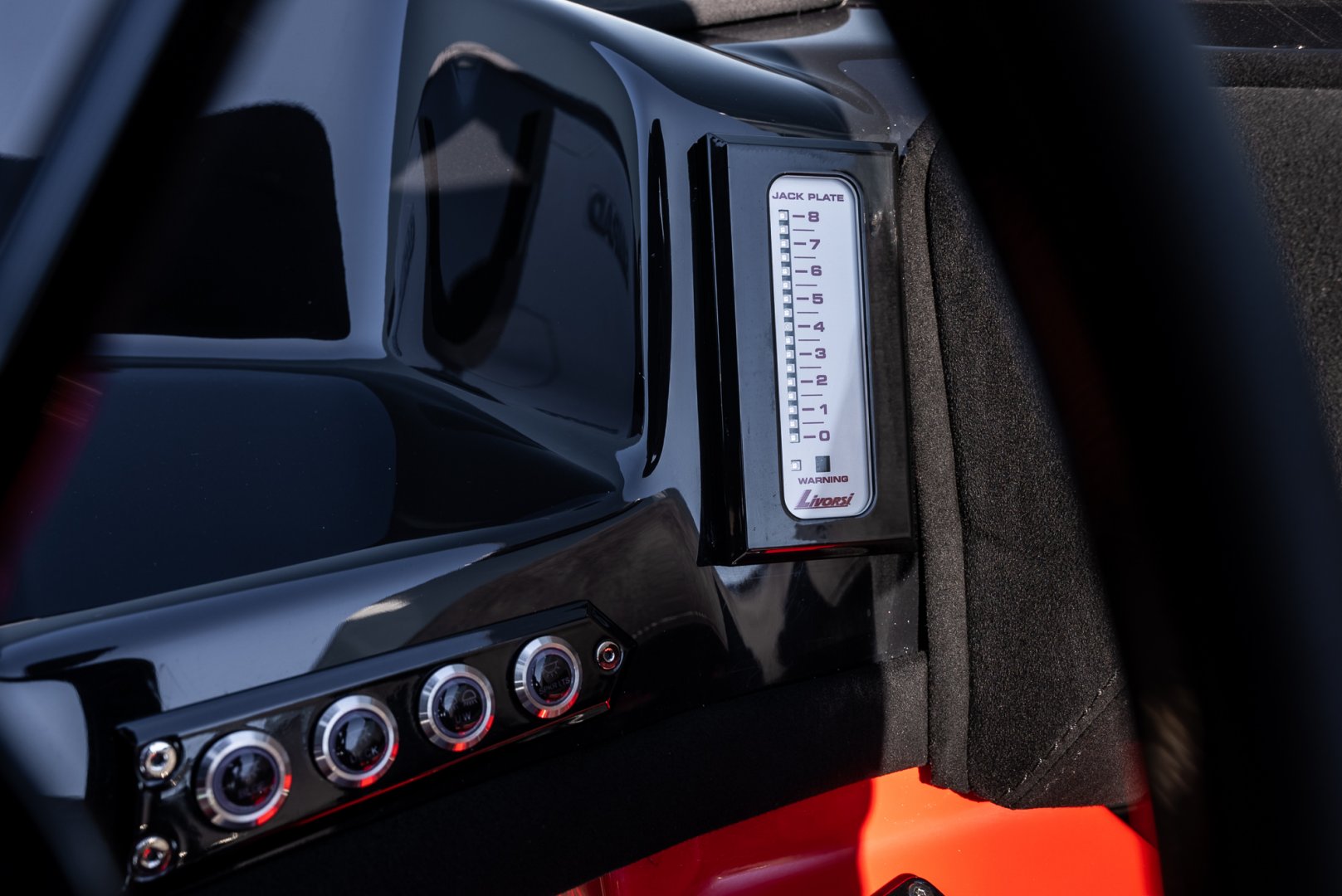 Their interior department has been experimenting with new ideas and new designs that are far beyond the traditional looking seats that used to be somewhat "standard" in all Eliminators (even the high end ones). This particular design I find to be somewhat "hypnotizing" like staring at a Pink Floyd album cover for awhile. I love the "race inspired" shapes of the front buckets and that little extra "bolster" on the sides up by where your shoulders would be. It's subtle things that really put together the overall picture. As well take note the Bimini is powdercoated black in the background so your eyes aren't drawn to it when you are looking in the cabin. 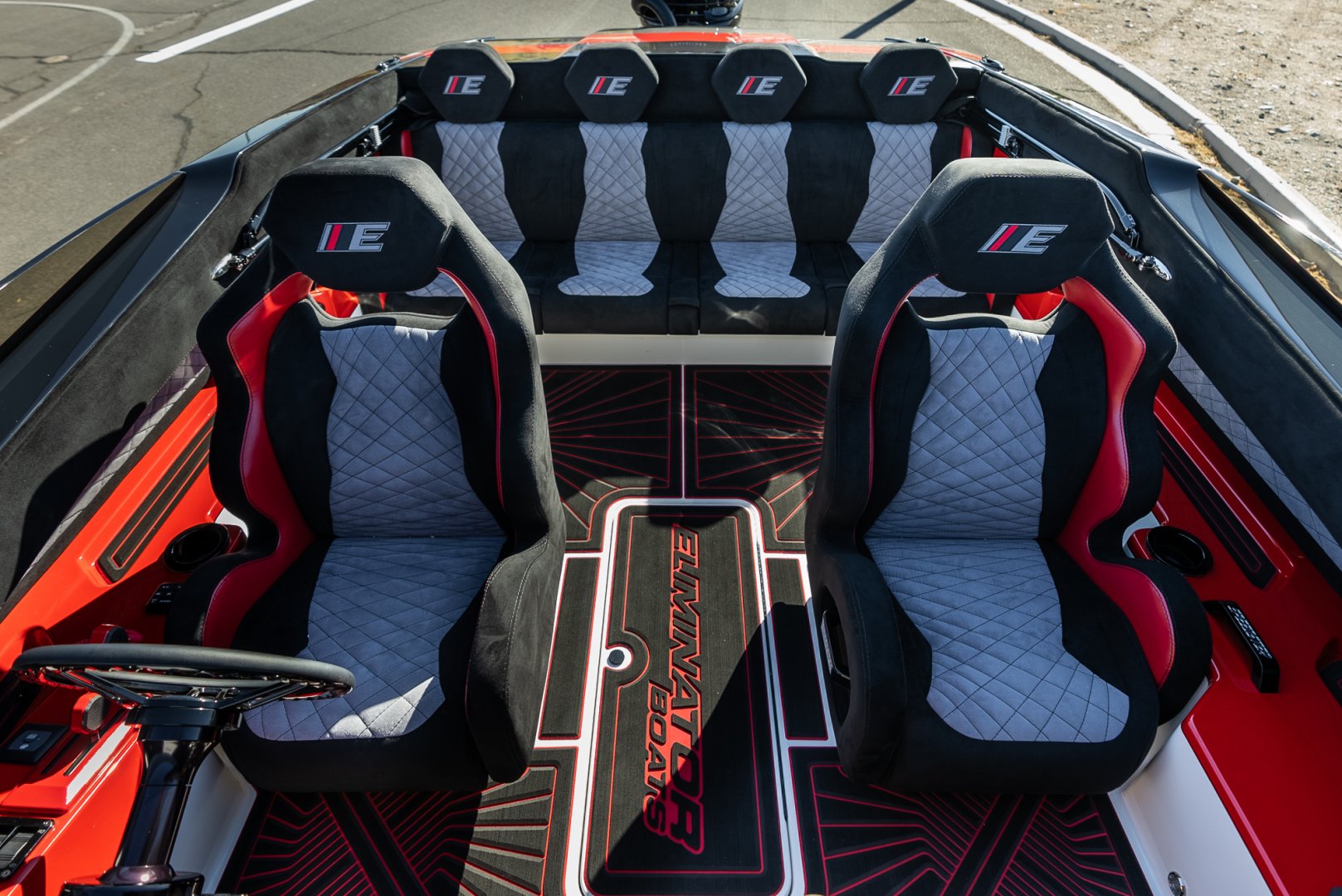 A little better look at the interior of Stephen's new ride.. You can see that they continued the interior design in the gunnels, and went with a very aggressive Sea Deck pattern. The steering wheel is typically a style that you'd find in an older Hot Rod, but once they powder coated it black and added the "E" it really ties in together nicely with the rest of the boat. 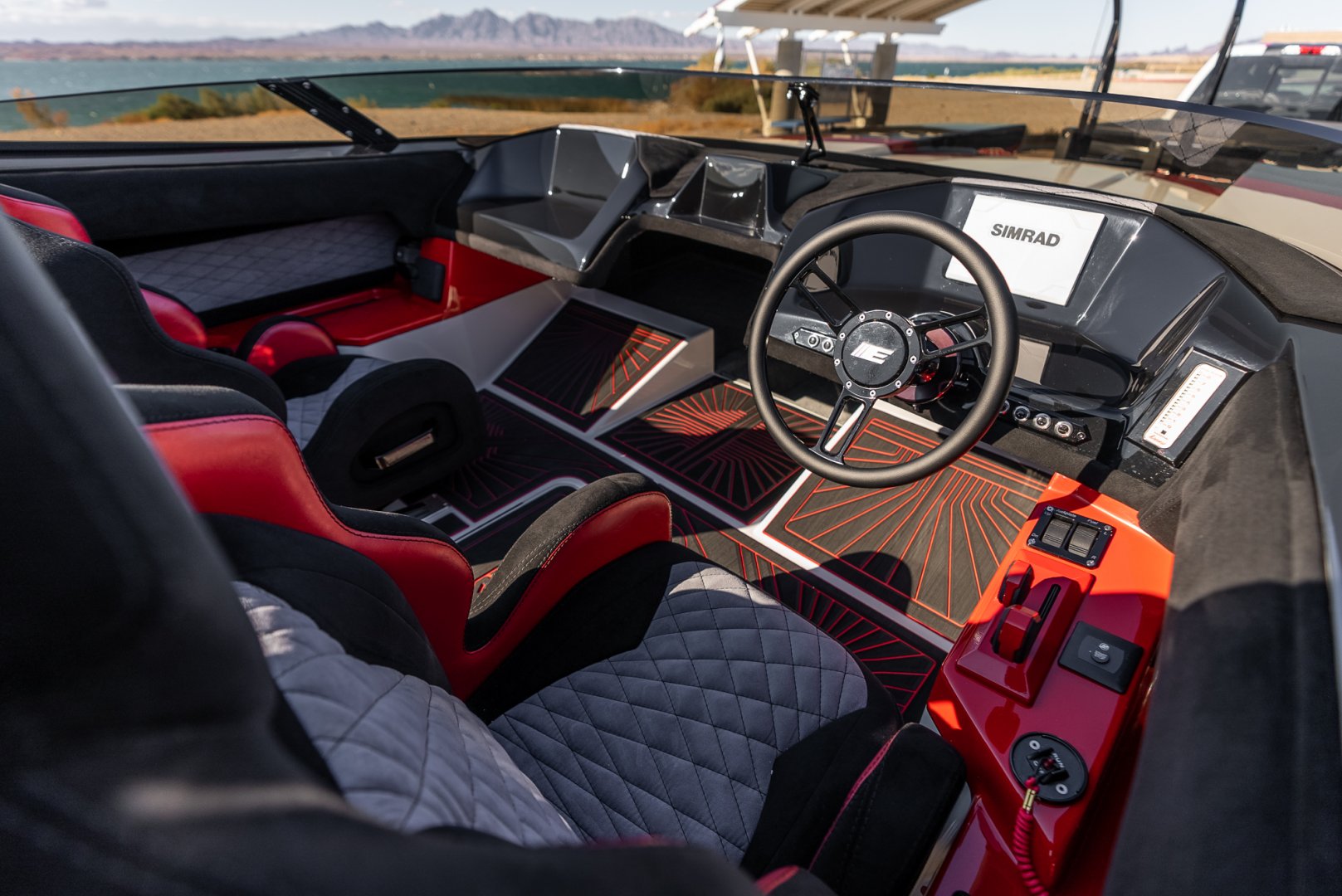 Hertz audio takes care of the "party duties" and if you look below you can see creature comforts integrated into the boat without being "intrusive." I like the fact that they put the onboard charger off to the side of the boat so you can reach in and plug it in, without having to board the boat while it's on the trailer. 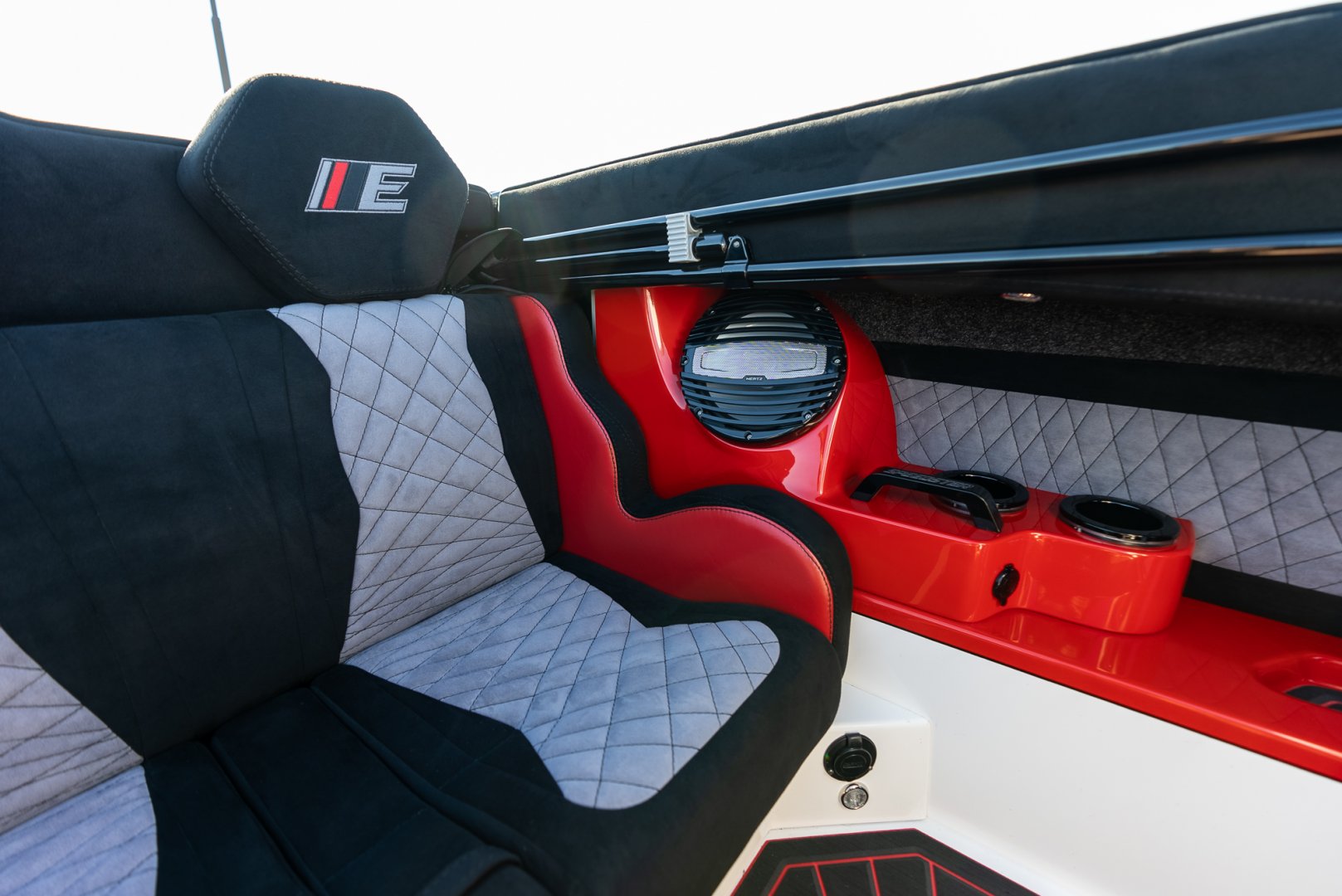 Eliminator like some of the other higher end manufacturers is now having most of it's billet components made directly for the company as opposed to purchasing "standard rig kits." They have been doing this for awhile now, but they are customizing each part more and more as time goes on so it's worth noting. 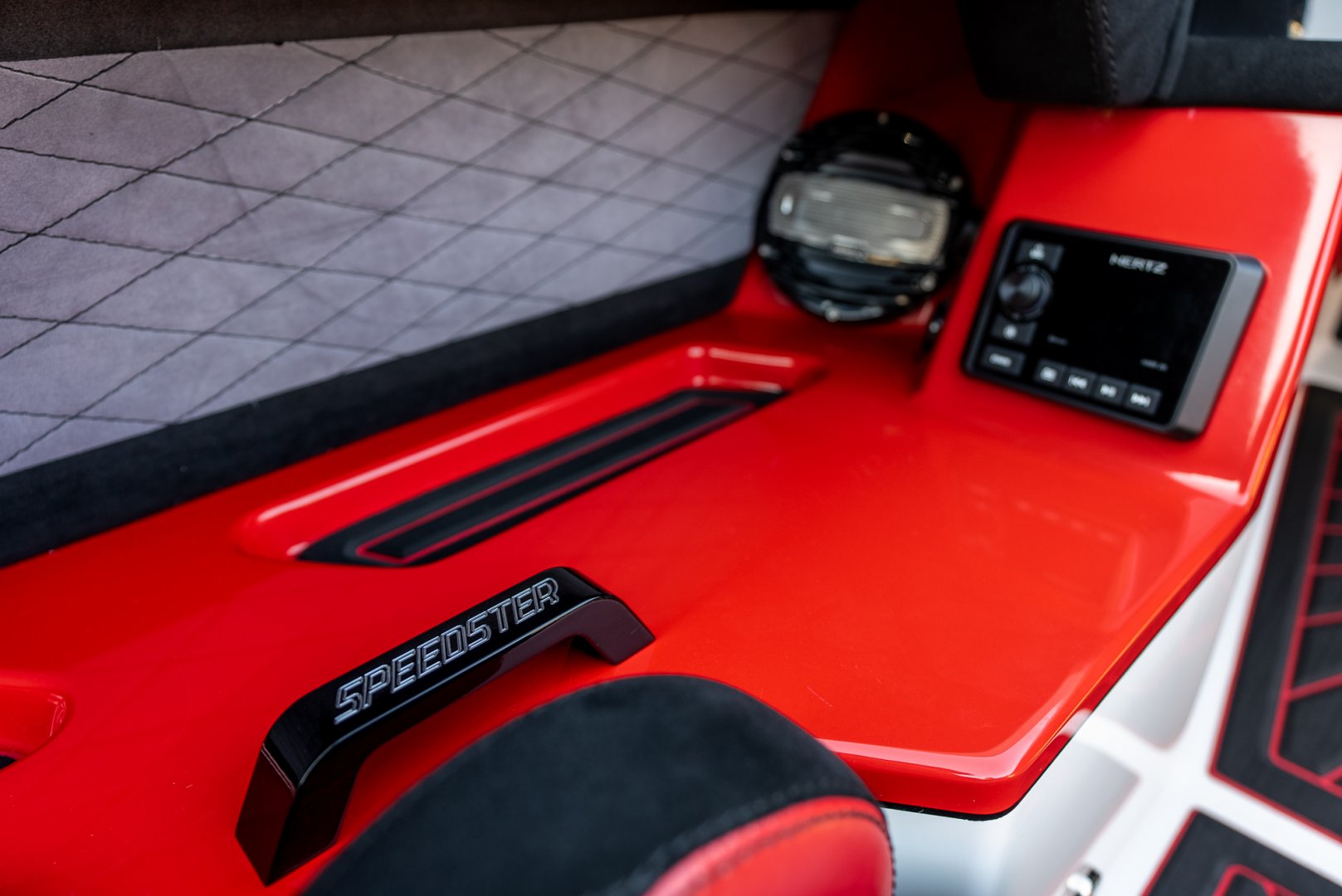 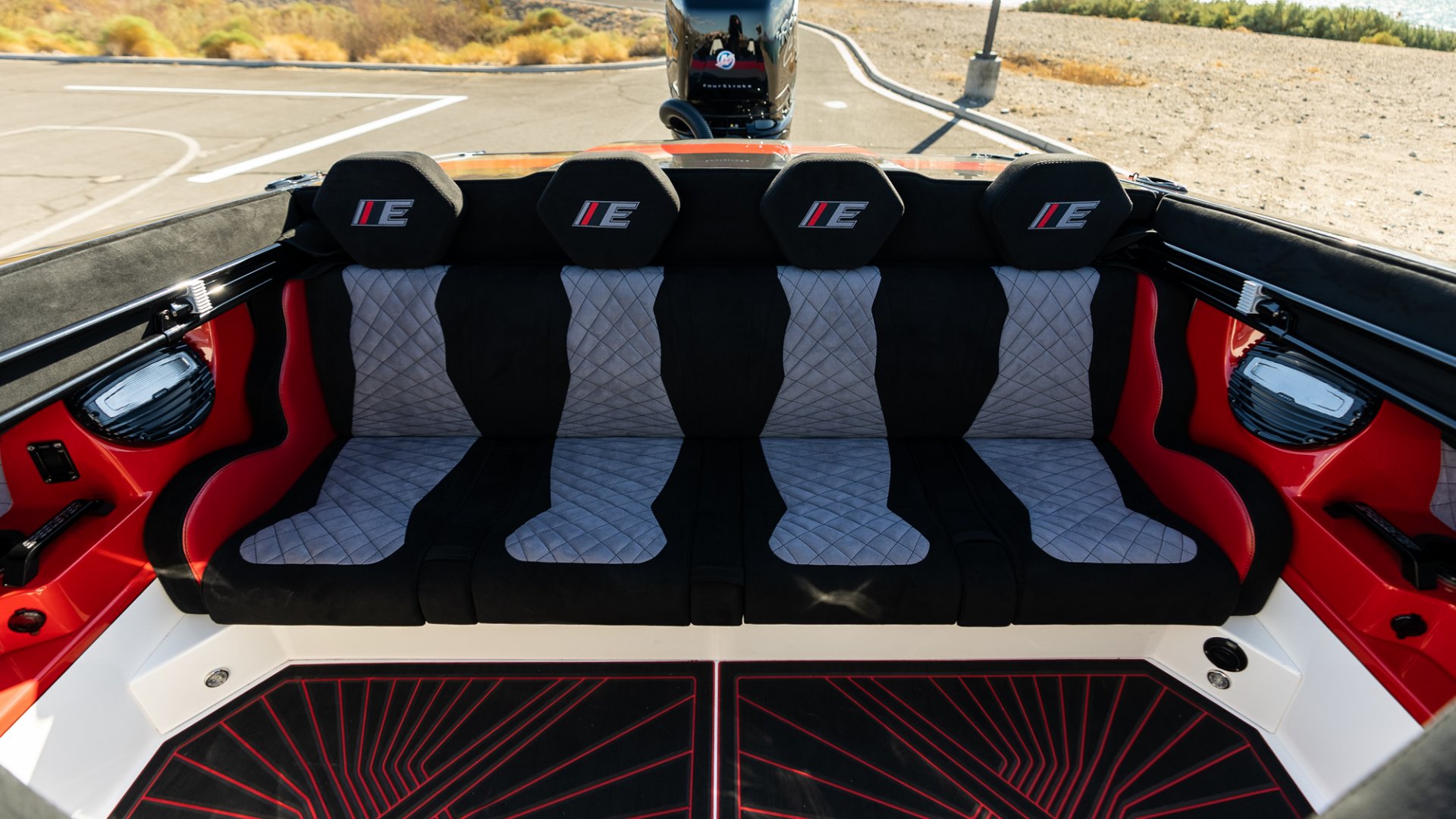 That Porta Jack design is really cool. The design itself has been around for awhile, but I don't believe anybody had really start producing them for public consumption until now. It's a single ram that when actuated not only raises the Prop Height, but also changes the setback of the motor! The higher it goes, the closer the motor will end up to the transom. Also note in this picture the custom vents with a mesh & web material inserted behind them. Came out really trick looking. 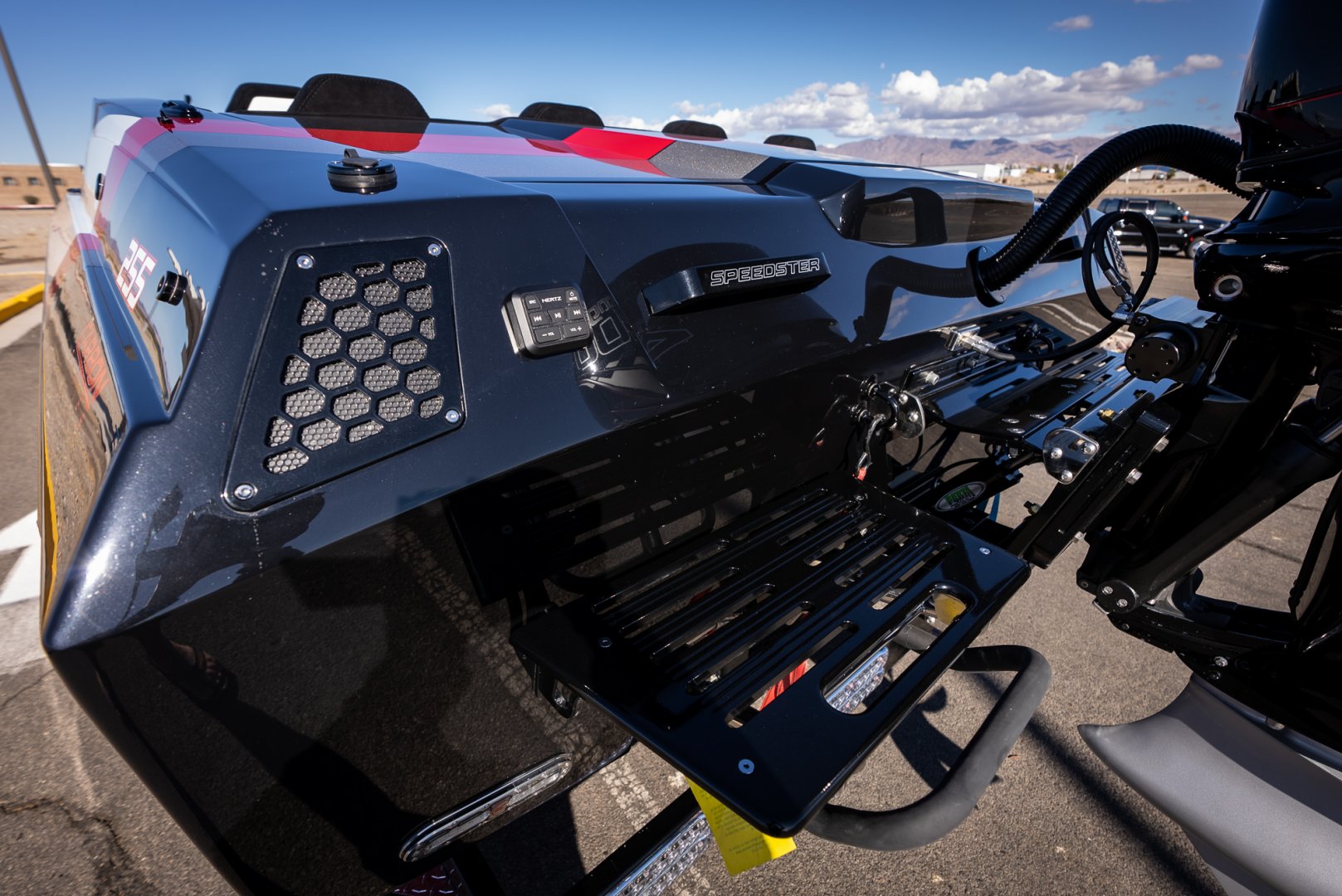 Pictured here up near the Sandbar in Lake Havasu, Mark was going over the boat with the new owner after demo'ing it for him. 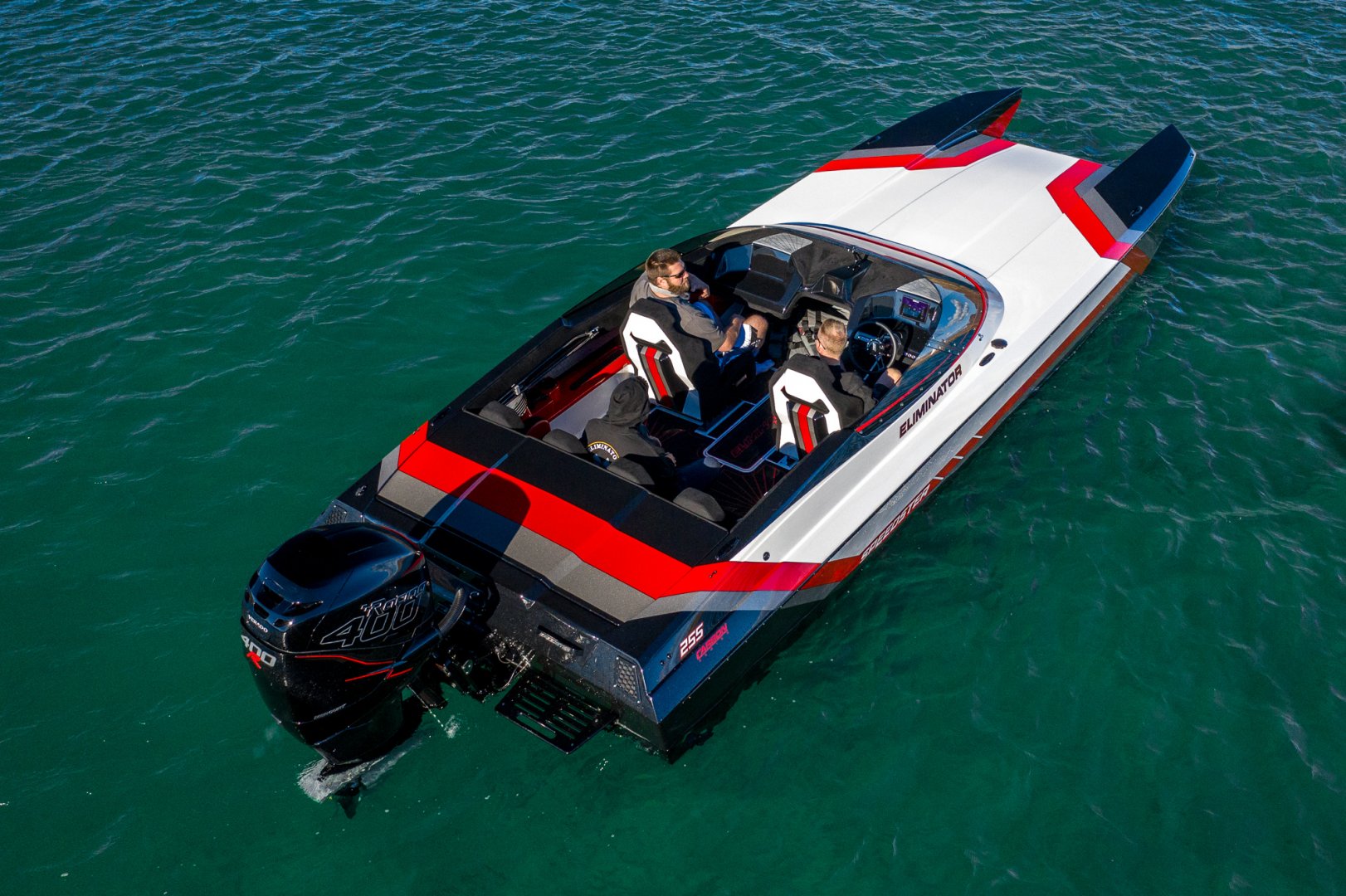 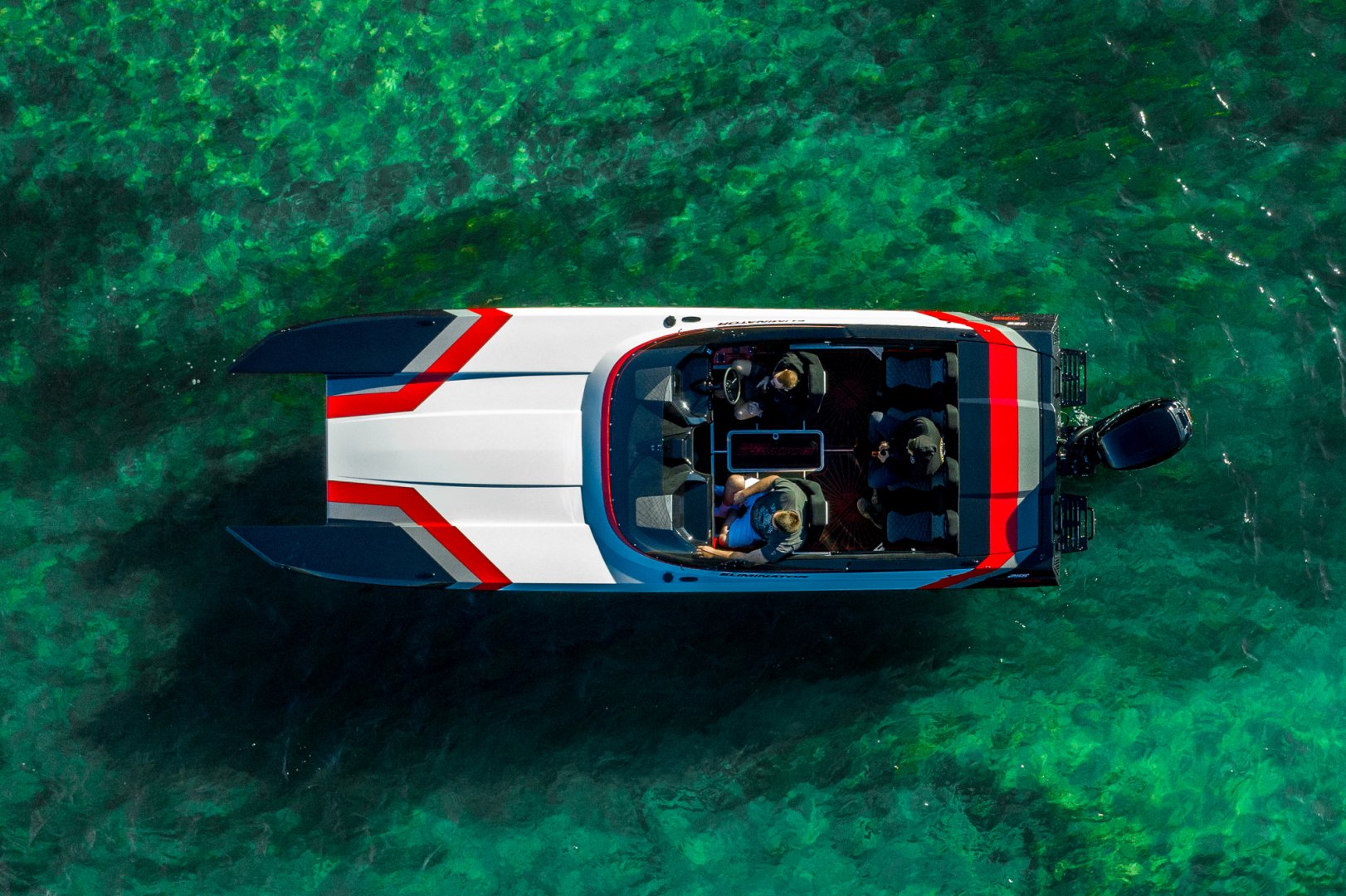 It's hard to come up with a gel that looks good from virtually every angle (side, top behind), but this boat manages to pull it off! 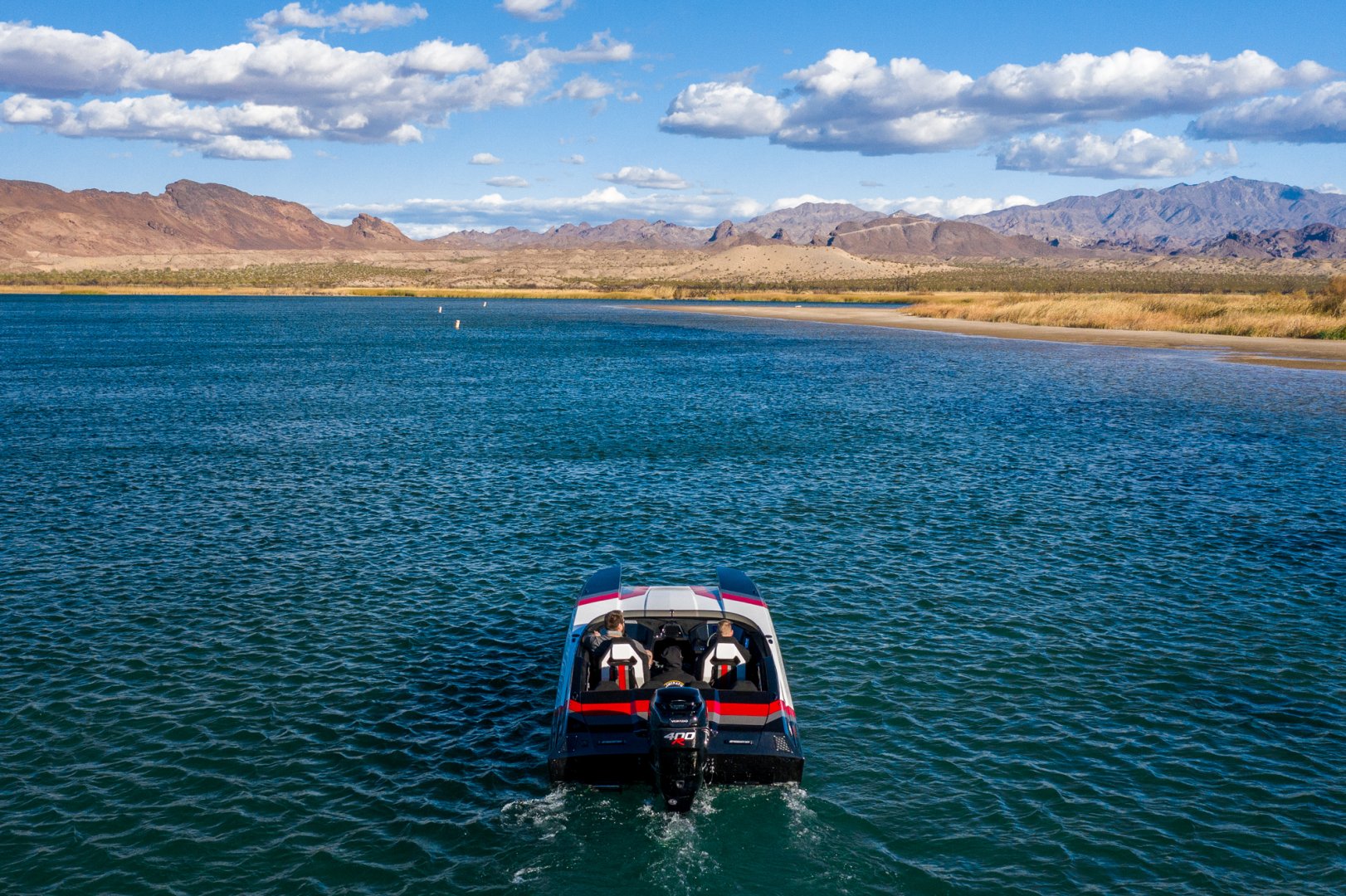 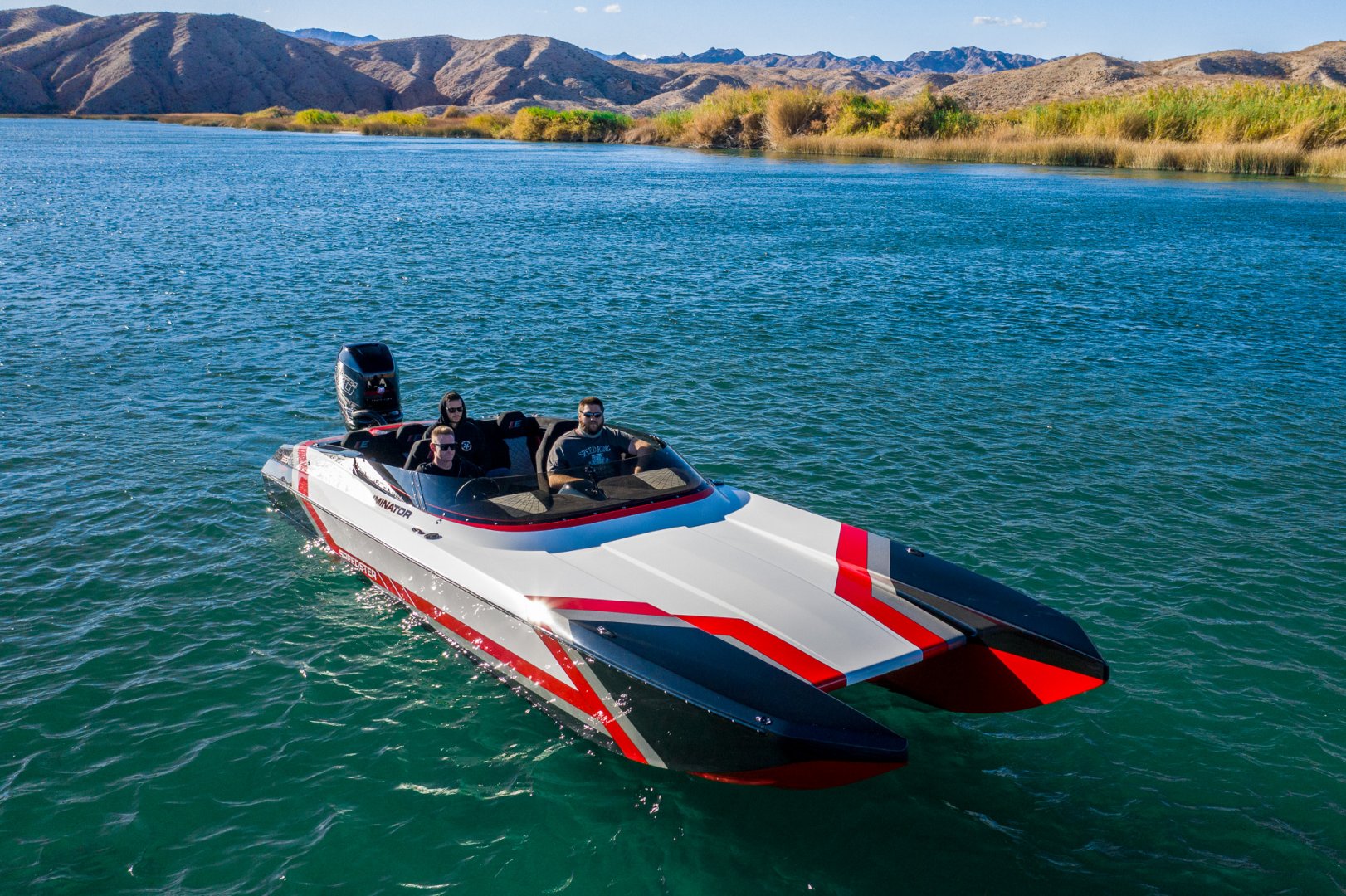 The view most in the Chicago area rivers are going to be familiar with once the weather warms up. 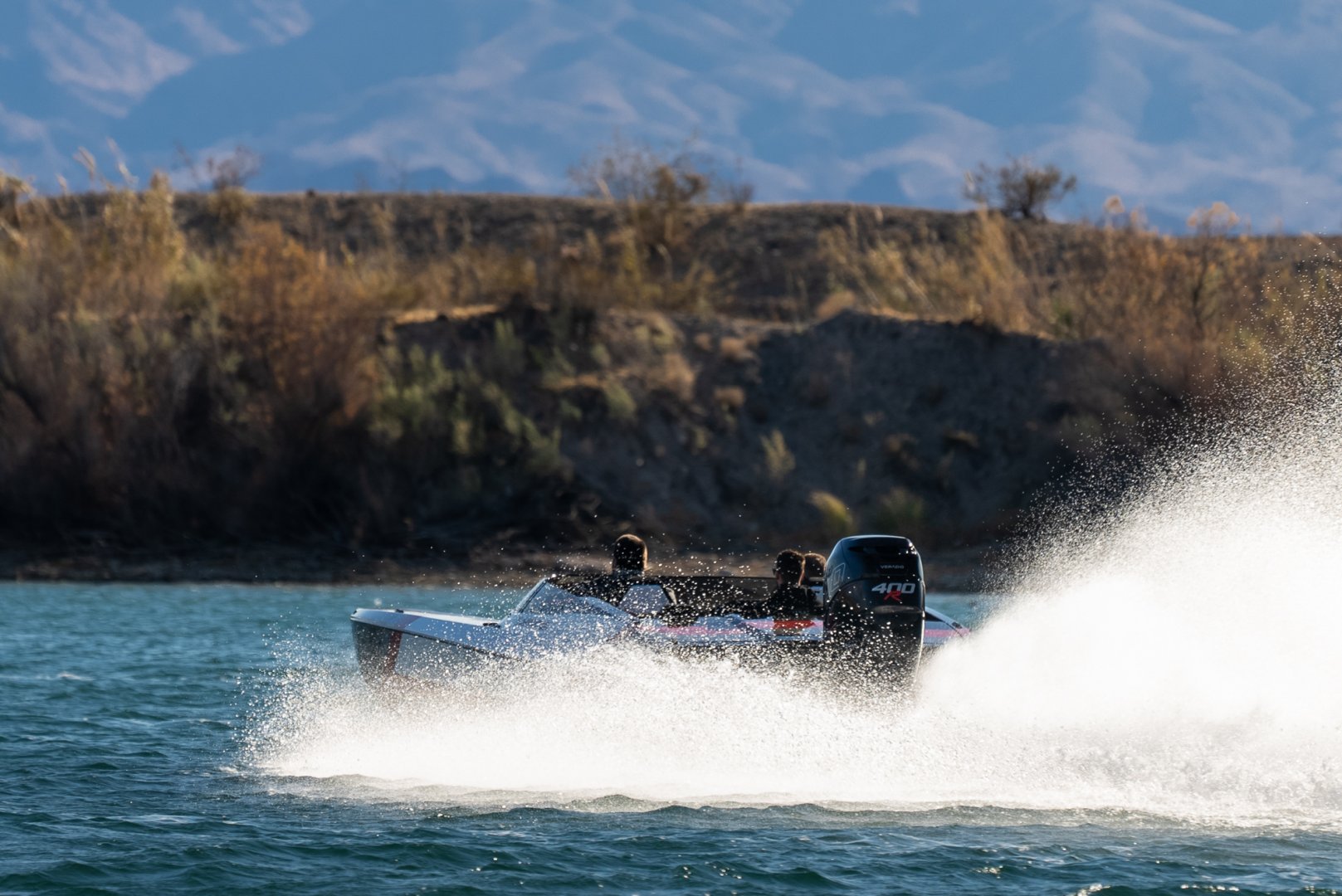 Congrats to both Stephen on his new boat and Eliminator for really pulling together an awesome package for another happy customer!
Reactions: CALEXODUS, Nanu/Nanu, spectras only and 10 others