TAKING IT TO THE NEXT LEVEL – DRIVE SWAP

Article Gallery
Anticipating More Horsepower Under the Engine Hatch Isn’t a One-Dimensional Decision. There Are Consequences. Matching Motors and Drives Is a Critical Part of Any Make-Over Game Plan.

This is the kind of dilemma a lot of us would like to have. Imagine this; you’re the owner of a beautiful 38 Top Gun Cigarette with a pair of Mercury Racing 525EFI engines and stock ITS Bravo XR drives. What could be sweeter?

If you’re anything like Tim McCray, you’re always ready to move to the next level of performance. In Tim’s case, his ‘next step’ is to supercharge his 525s with a couple of Whipplecharger kits which will bump horsepower into the mid-700 range. Sound simple? Well, it is until you start to consider all the related consequences.

Whenever you decide to add significantly more torque and horsepower to any boat, the engines aren’t your only concern. In Tim’s case, his Cigarette isn’t a paper- weight and he likes to run at the lake (Havasu mostly) and in the ocean. And for those expedited jaunts to Avalon Harbor on Catalina Island, occasional ‘air-time’ is often a standard part of the lunch-run procedure. Although it does add to the fun, spanning several offshore swells at a single bound puts a real strain on the mechanical limits of the drive units. Compound that reality by upping the available horsepower by a couple of hundred over stock and the likelihood of having an untimely and expensive drive failure is almost a certainty.

So what is Tim to do? Fortunately, Tim has IMCO Marine in San Dimas, CA on speed-dial and the answer is as simple as ordering a pair of IMCO’s SCX drives to replace the stock Mercury XR. With over three years of unblemished in-service experience, the complete SCX package has distinguished itself as a ‘go-to’ alternative when horsepower levels exceed 500 and approach four-digit outputs. Besides having beefed up net forged gears, bigger bearings, more internal oil capacity, and stronger shafts, the beauty of the SCX is its relatively easy bolt-up swap-out for the MerCruiser Bravo. The SCX is also available in a variety of gear ratios and offers the set-up flexibility of adjustable drive heights from standard to three inches shorter. For Tim’s particular application, two-inch shorter SCX drives were selected since his ITS Bravos also used Mercury’s optional two-inch cut-down units.

Fred Inman, president of IMCO commented, “A lot of boaters are blinded by expectations when they up the horsepower in their boat. Stock Bravo XR units are fine, but have their limits in the mid-500 HP range. After that, expensive things begin to happen. What’s especially critical is the weight of the boat and driving habits of the owner. The heavier the payload, the more strain it puts on all the propulsion system components. The same is true if the driver has a heavy throttle-hand. Hard, fast turns, full-throttle acceleration and flying off swells are all brutal on stock parts. That’s why we developed the SCX, to raise the bar for boaters who routinely push the limits of performance.”

For this particular drive swap, several important points need to be noted. First, there is a physical size difference between the gearcase lower unit of a Bravo XR and an SCX. Because IMCO’s SCX uses larger gears, bearings and shafts, the physical size (diameter) of the gearcase bullet is understandably larger than that of the Bravo. Because a bigger bullet creates more drag, a marginal loss in top end speed may occur when switching to an SCX. In most cases, however, the loss is negligible, often as little as 1 to 3 miles an hour depending upon the hull and overall set-up. To gain back that potential loss, and perhaps even pick-up a little extra, remember that the SCX is height adjustable allowing for as much as a three-inch shorter drive compared to a standard unit. If the set-up will allow, raising the propshaft even by as little as one-inch higher can easily gain 2 to 4 miles an hour with a shortened SCX.

Second, when a complete SCX swap is made, the stock Mercury stern drive helmet is also replaced with a much more substantial IMCO helmet which is an identical bolt-in replacement. When this swap is being done on a standard Mercury XR package that is not ITS, IMCO strongly recommends an upgrade to their heavy-duty gimbal assembly as well. But, because this is an ITS, IMCO does not offer a gimbal upgrade for that specific model so the stock gimbal (as long as it is in good condition) must remain.

Third, there is a significant difference in the amount of oil capacity between the Bravo XR and the IMCO SCX. The XR unit holds approximately two-quarts of oil while the SCX requires more than twice that volume at five-quarts. Because of this difference, the stock plastic drive oil reservoirs (one for each drive) must be replaced and upgraded to a high performance style drive oil reservoir. If this is not done, the oil expansion occurring within the SCX will far exceed the capacity of the smaller stock reservoirs, eventually building up enough internal pressure to give an engine compartment a messy oil bath.

Although this drive swap may appear to be a big job, it’s not if you’re experienced working on MerCruiser Bravo drives and have a great selection of tools at your disposal. It definitely goes better as a two-person project and can be completed within a normal work day. Here’s how a typical step-by-step transformation takes place. 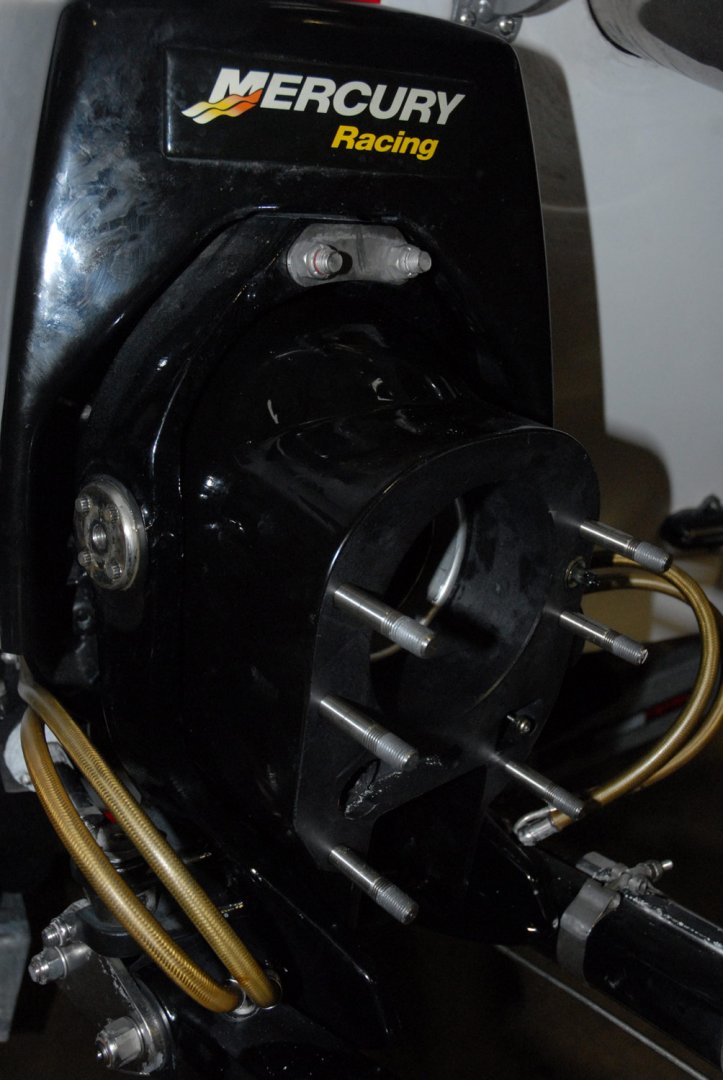 Here’s the way the stock Mercury ITS Bravo XR set-up looked when it came to the IMCO facility for the make-over. 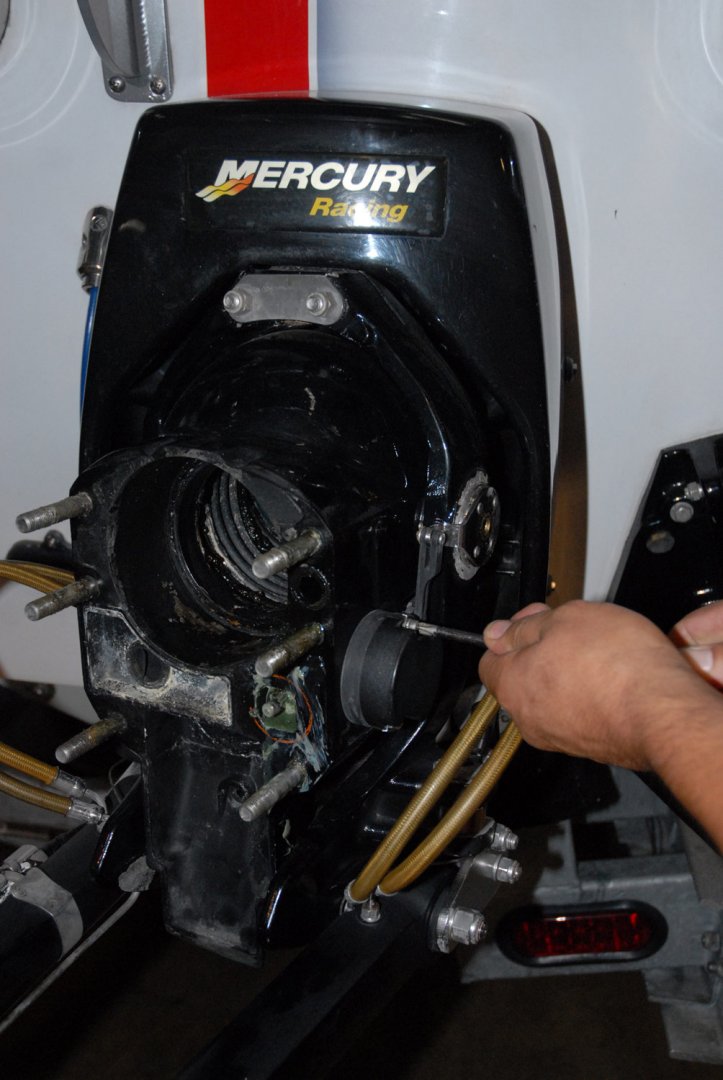 The XR drives are now off and the stock Mercury helmet is exposed. The de-rigging job is well underway. 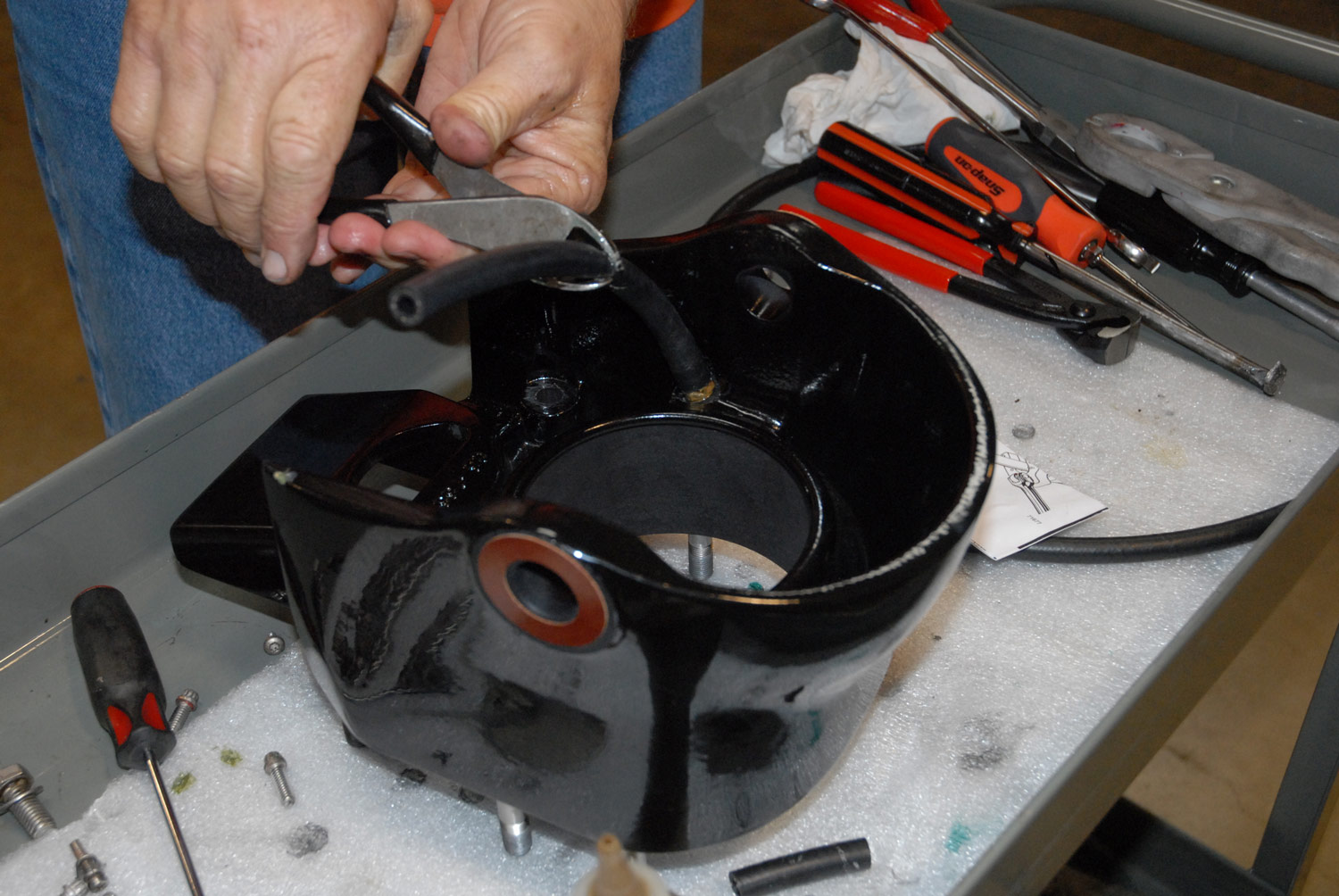 The upgraded heavy-duty IMCO helmet is being prepared for installation. 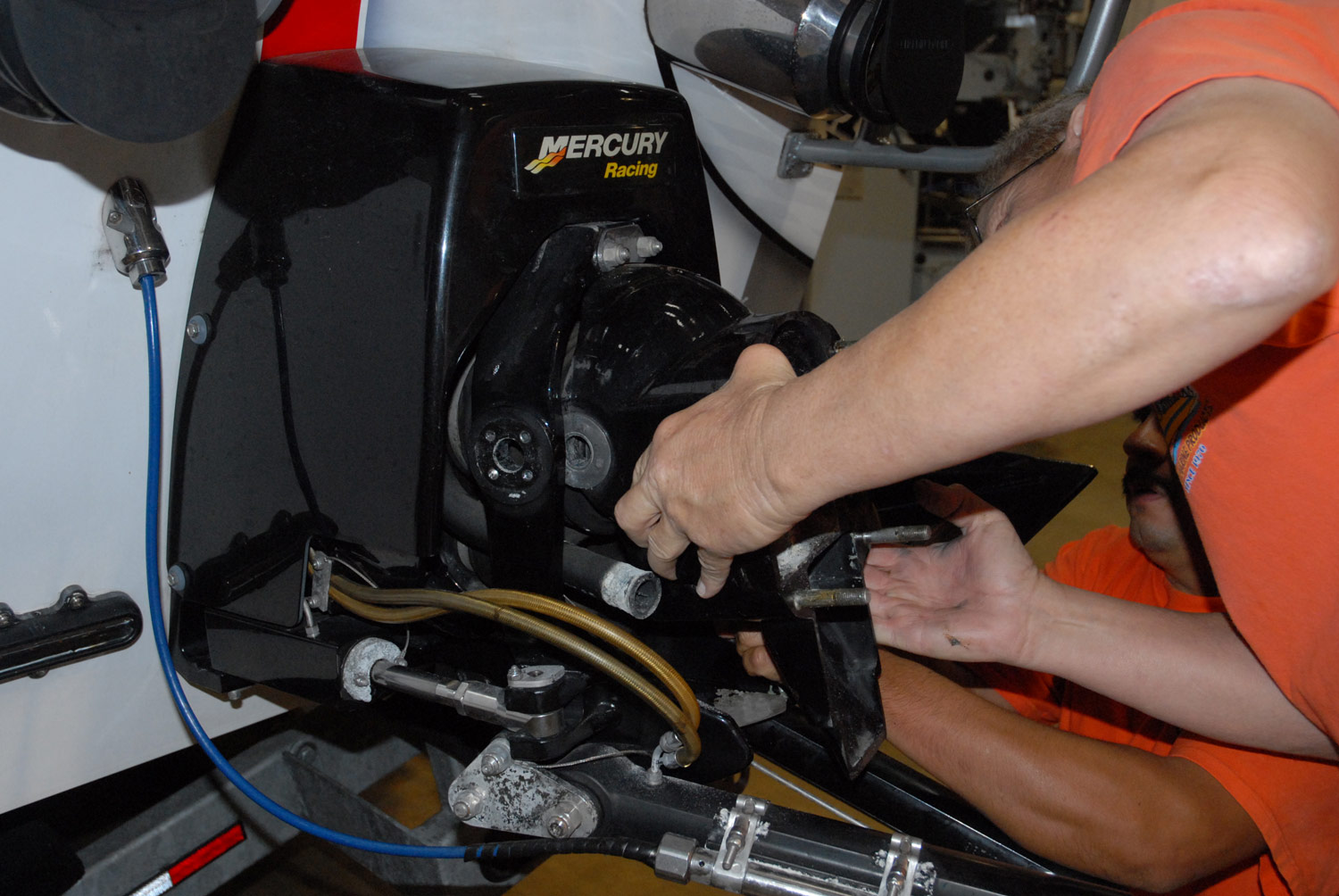 When removing the standard helmet, be very careful not to rip or tear the rubber bellows. If the bellow leaks, it will cause serious drive problems down the road. 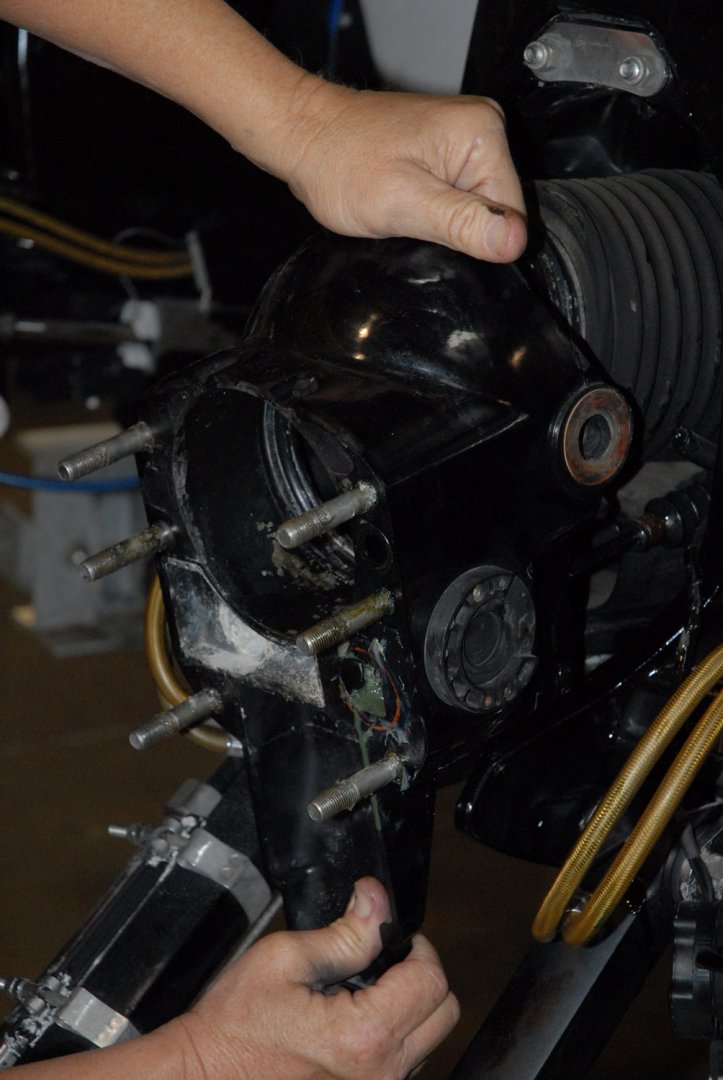 The stock helmet has been disconnected from the internal water hose and shift mechanism, and is now free to be slid out of the gimbal housing. 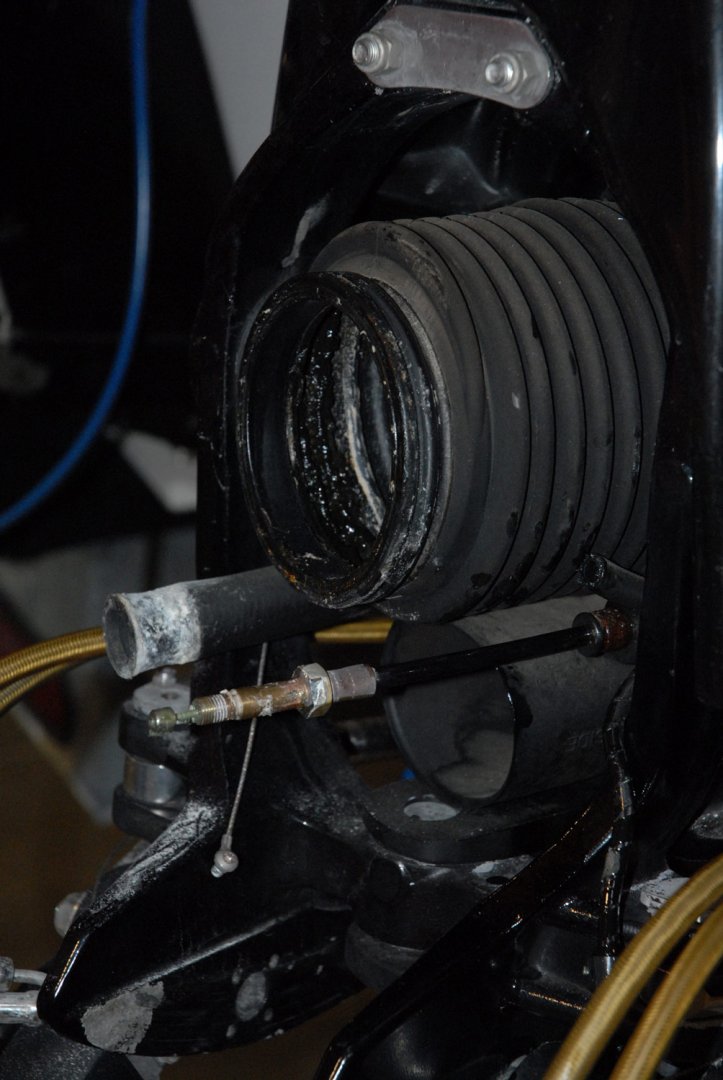 The helmet has now been completely removed and the bellows is exposed along with the water cooling hose (left side) and the shift mechanism (right side). 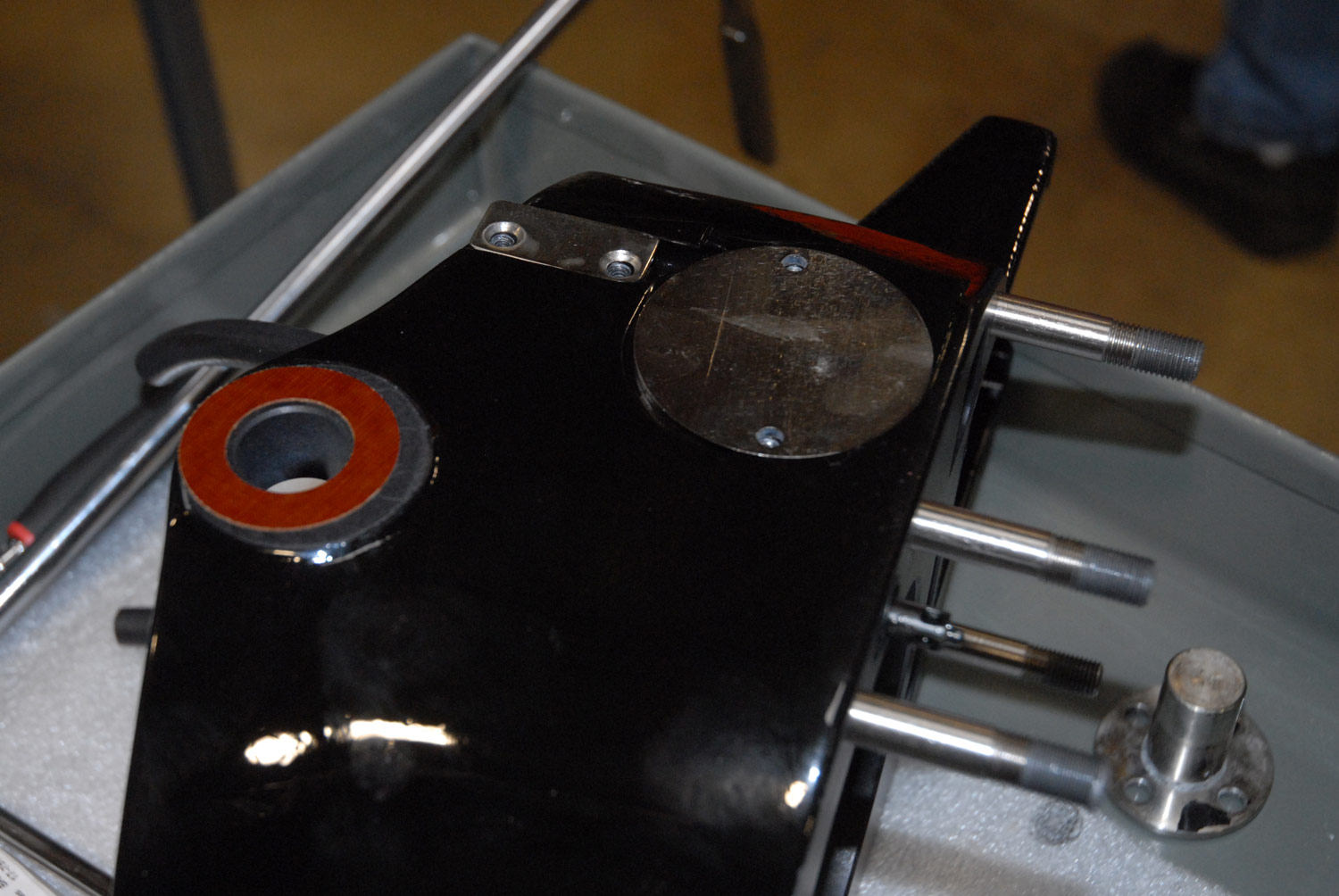 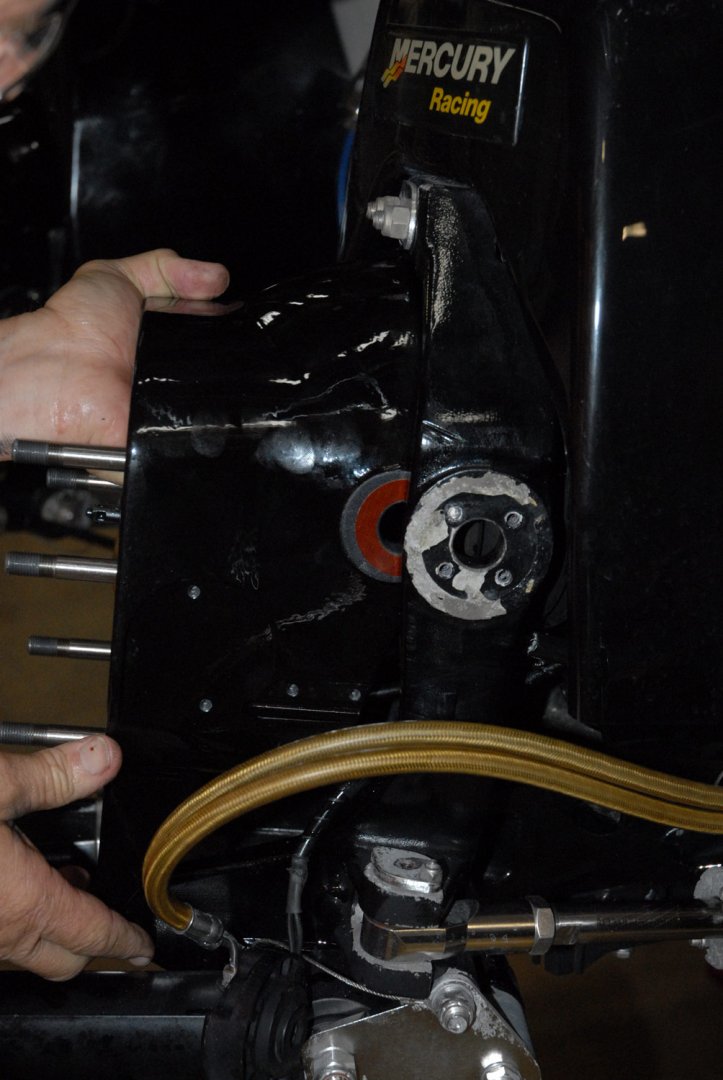 The new helmet is now installed. Be extra sure that the edges of the bellows are not folded or crimped. 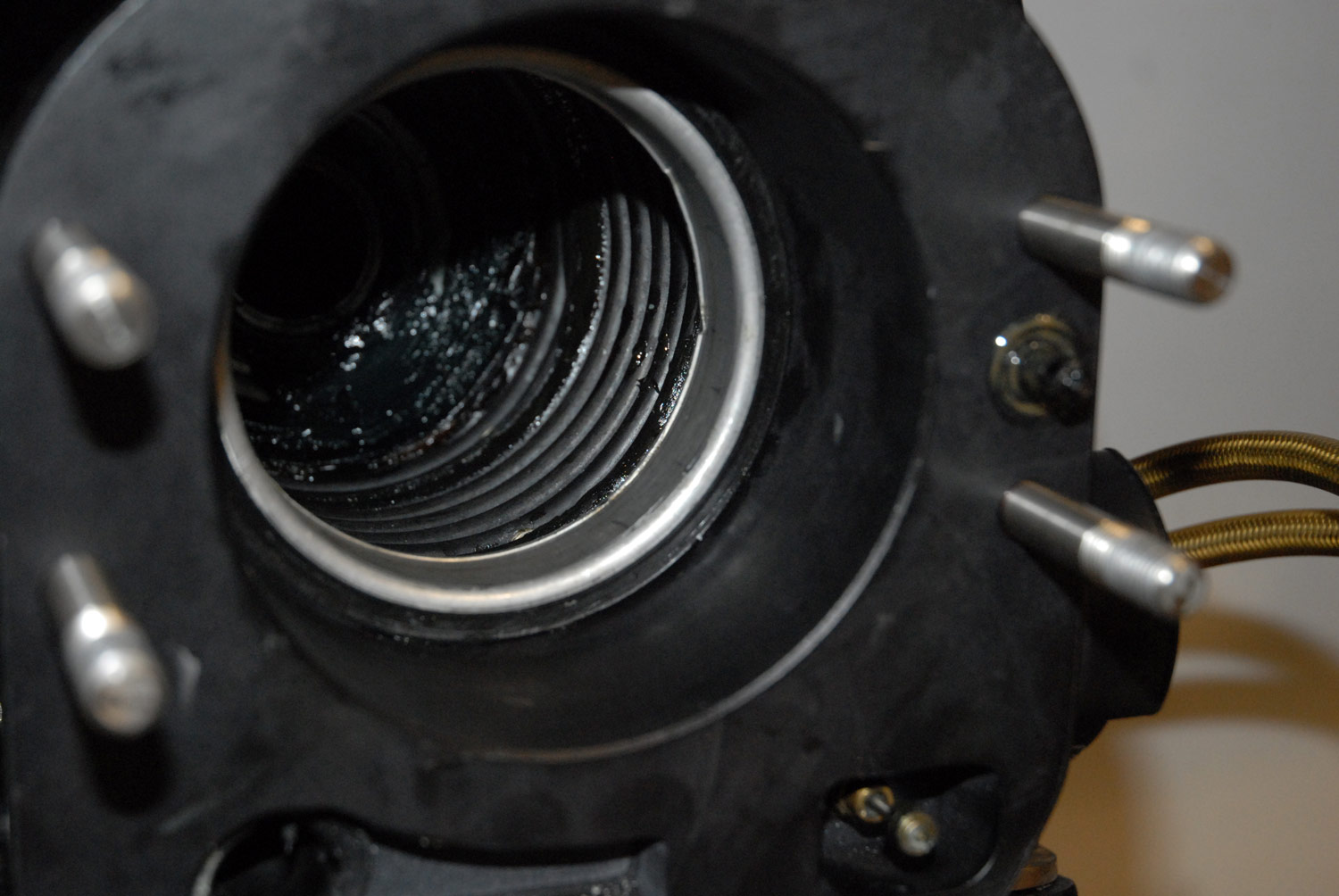 Next, insert the metal bellows spacer to ensure a good seal. To make certain that the spacer is in properly, measure the helmet lip. It should be approximately 2-inches deep around the entire circumference. 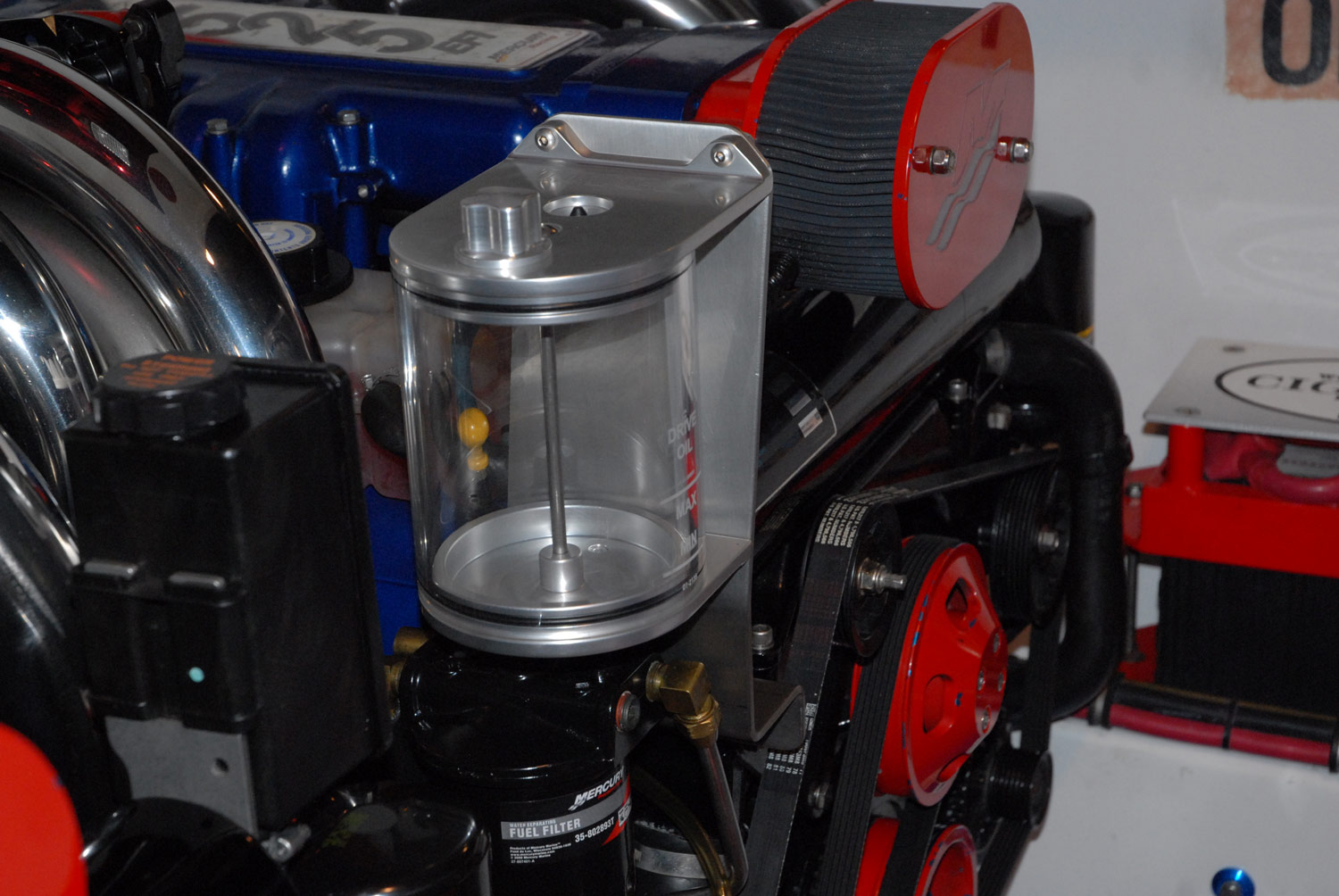 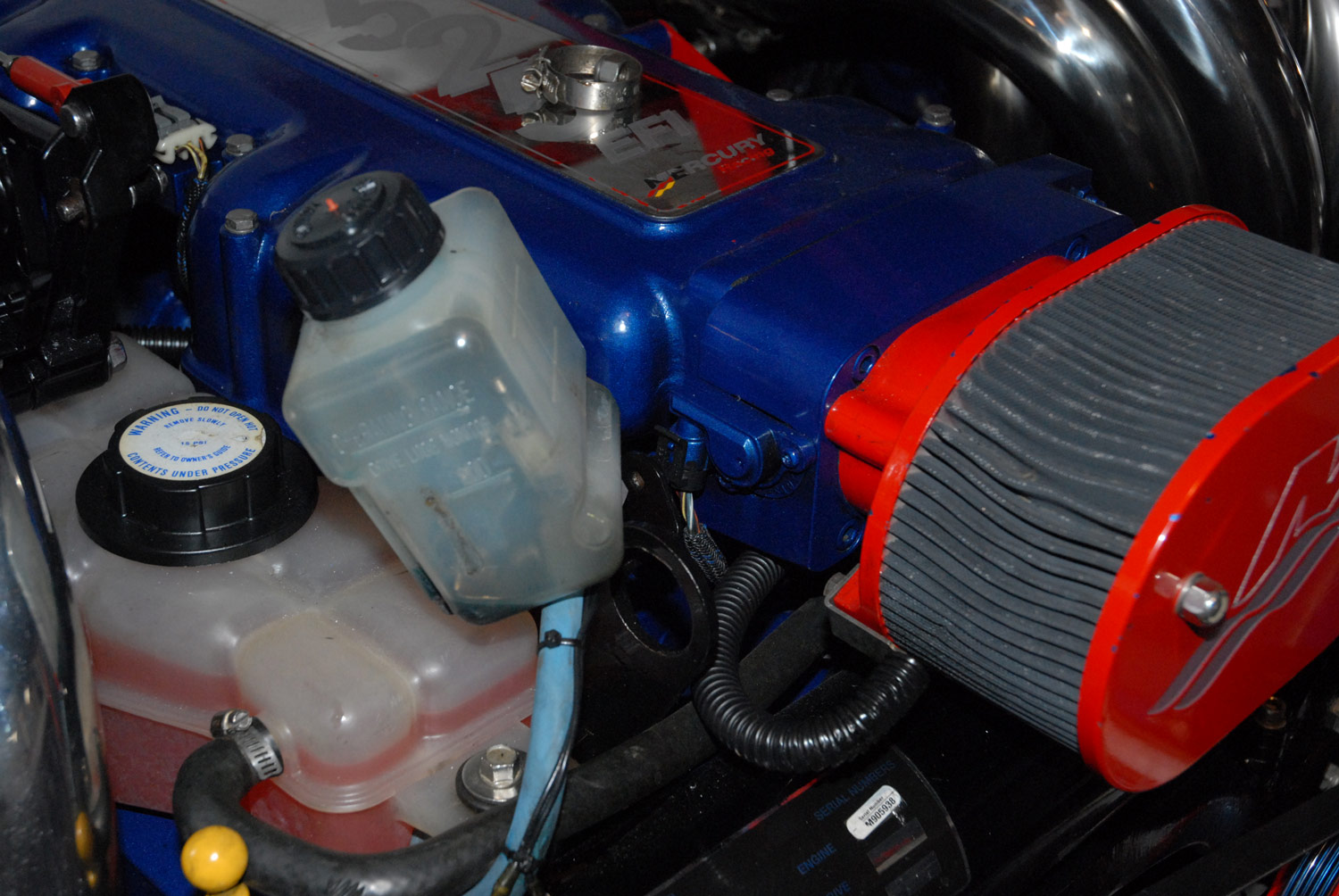 Here’s what the stock plastic oil reservoir looks like and is ready for removal. 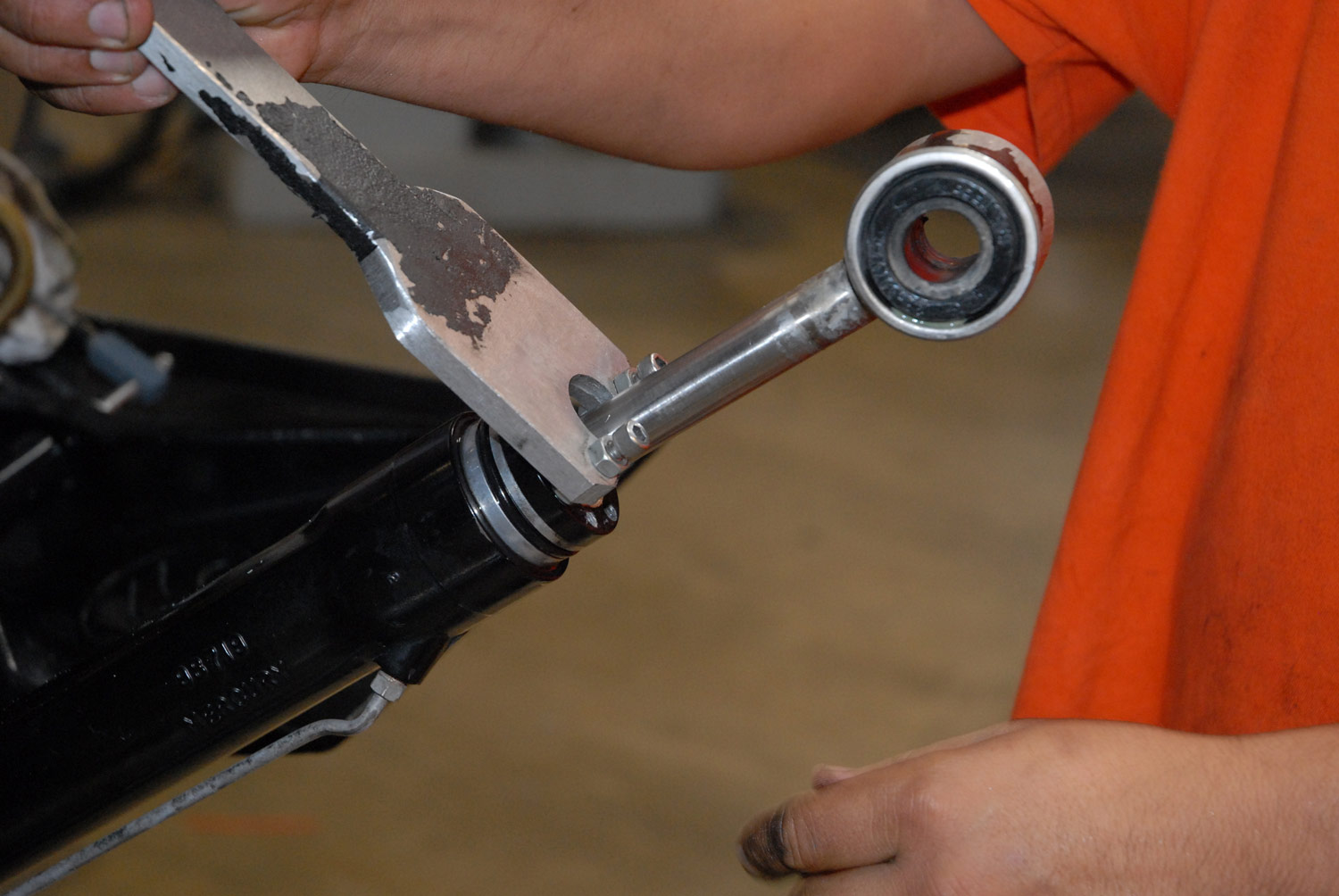 Because the IMCO heavy-duty helmet is thicker and more beefy than the stock helmet, it creates a minor clearance issue for trimming up the drive. To avoid this, IMCO makes a special retainer for the trim rams in order to limit the amount of up travel. 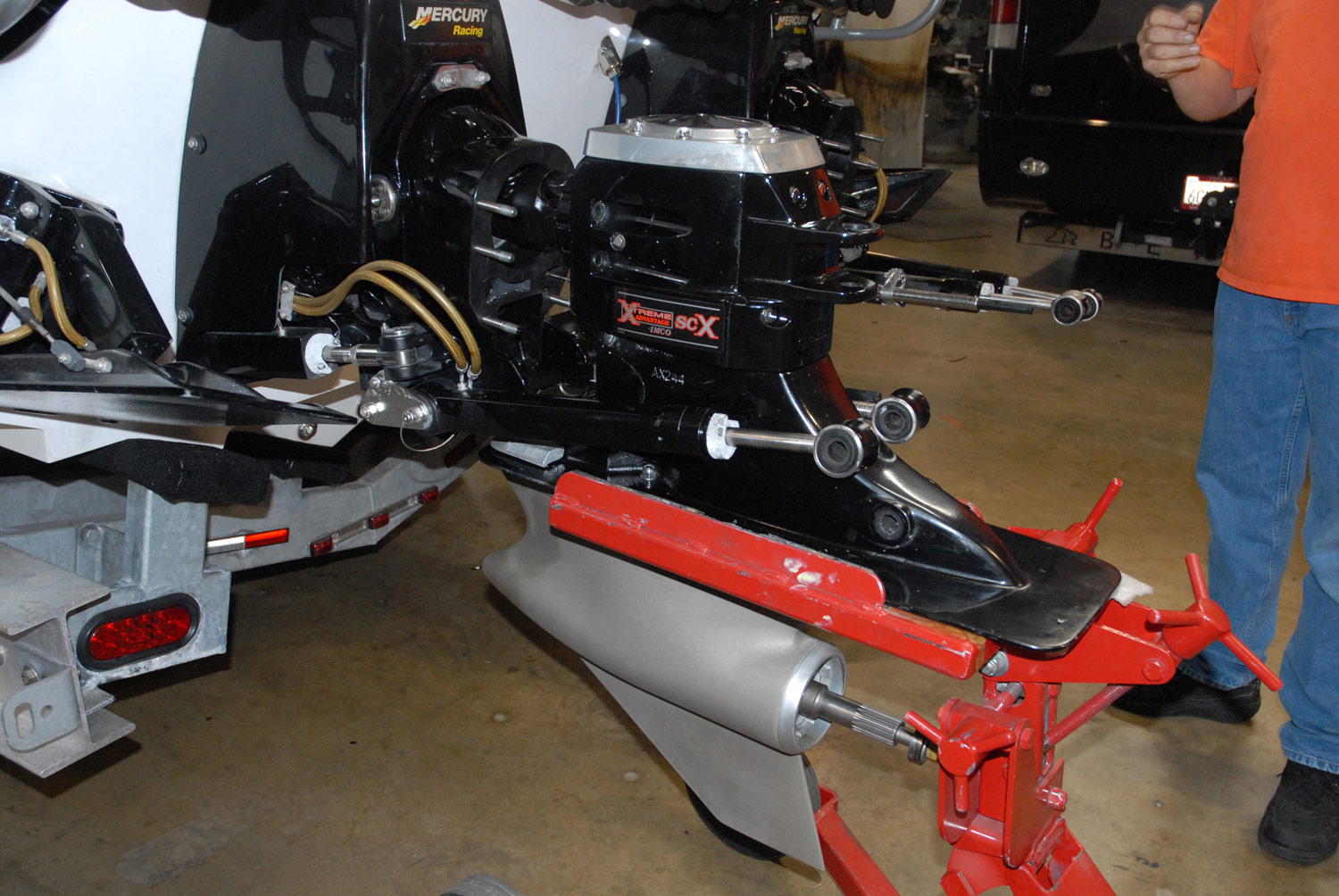 With everything in place, the new SCX drive assemblies are ready to bolt-on. 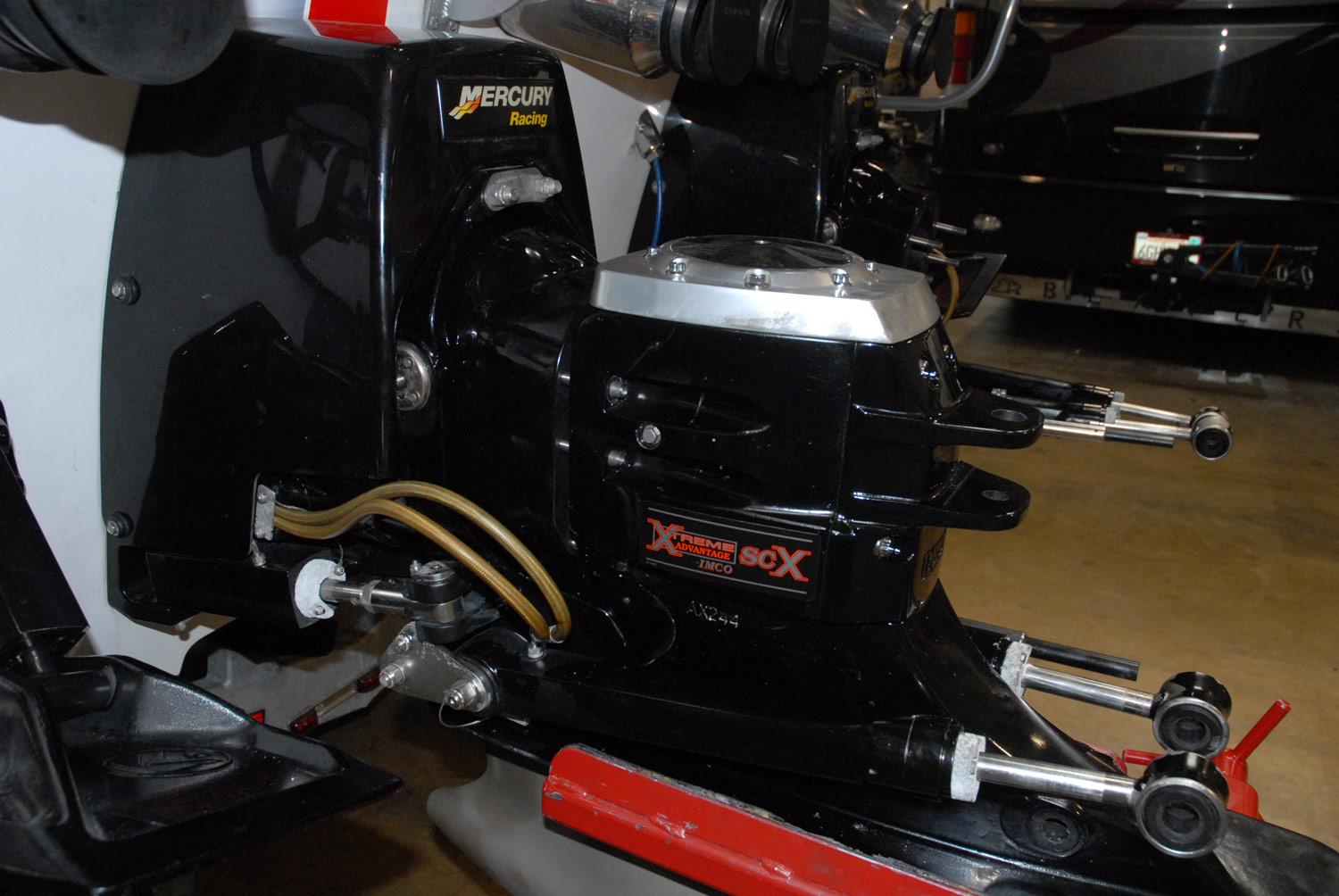 This is the final check-out and finished product , new drives, new helmets and ready for more horsepower.

Correction: The Cigarette image at the top of the article is not Tim McCray's Cigarette -- I had a photo of it but I'll be damned if I can find it! This Cigarette is Tom Whitham's with Brian Fetherolf of BD Performance Marine's daughter doing the driving during a SCOPE Fun Run. Sorry about that!
Reactions: Dkahnjob, Member: 71 and HPBoats83