The 2021 Powerboat Max Out at Mile Marker One


No matter your motive: poker running, pro-racing, or purely partaking in “pour behavior decisions” for your liver – powerboat purebloods plowed into their long-established mid-November South Florida sanctuary maxing out Mile Marker One with high-performance wickedness all around.

Drawing digits like never before, the Florida Powerboat Club (FPC) celebrated its largest aquatic armada ever with a reported 280 radical rides registered for the 29th anniversary Key West Poker Run, only to be heightened by the Race World Offshore (RWO) professional fastboat fleet which arrived to the Truman Annex dry pits ready, willing and able to duke it out for world championship bragging rights. 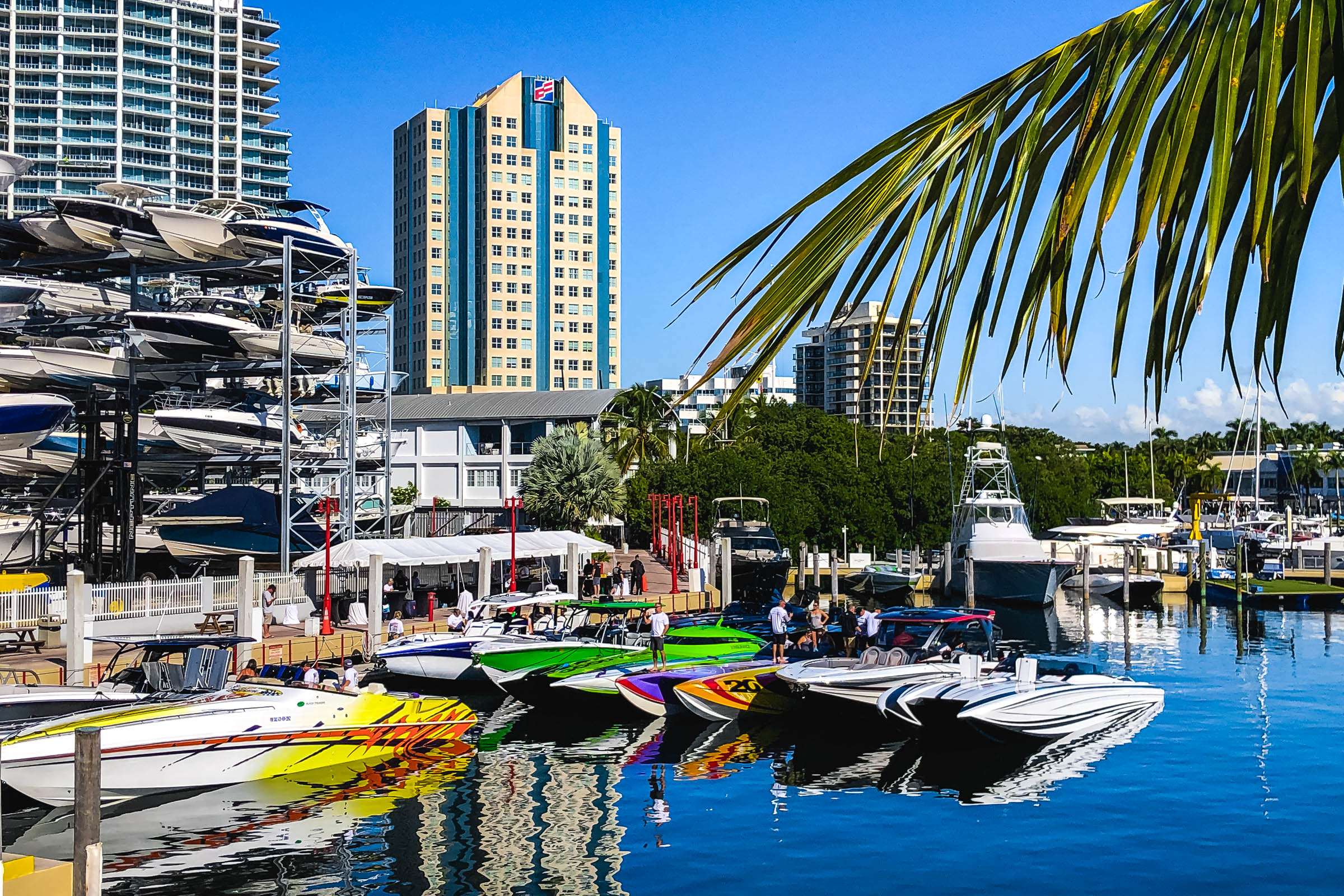 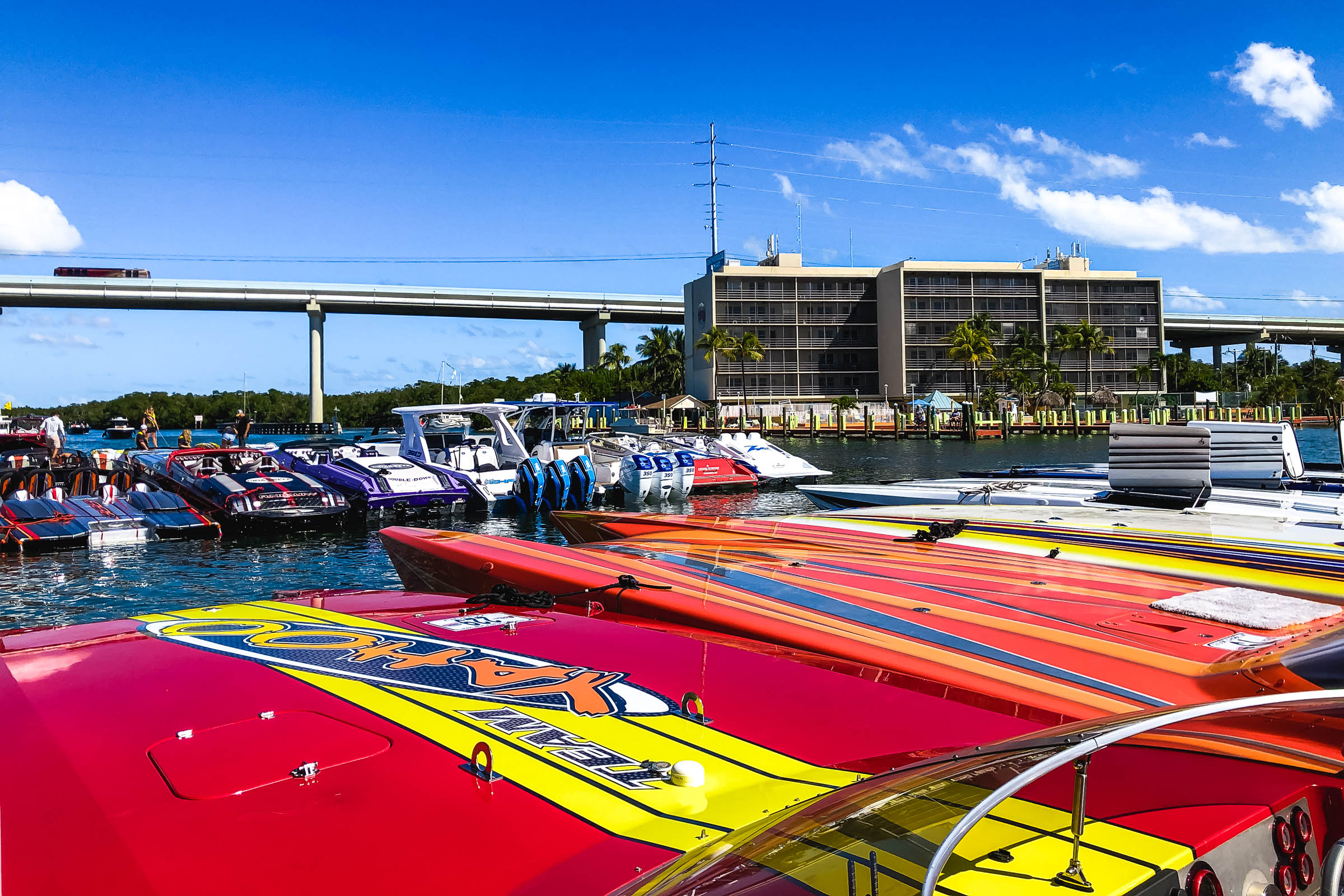 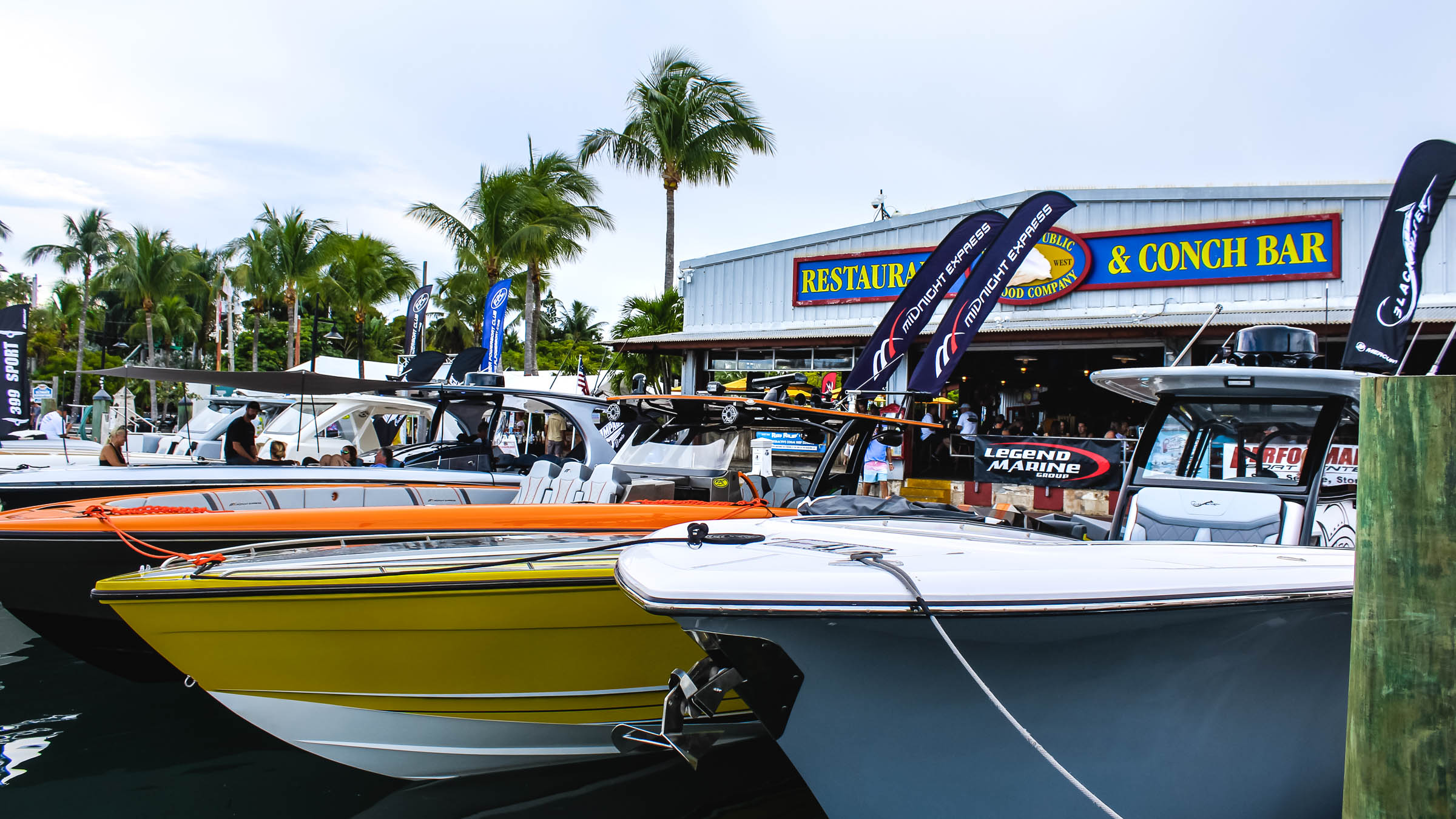 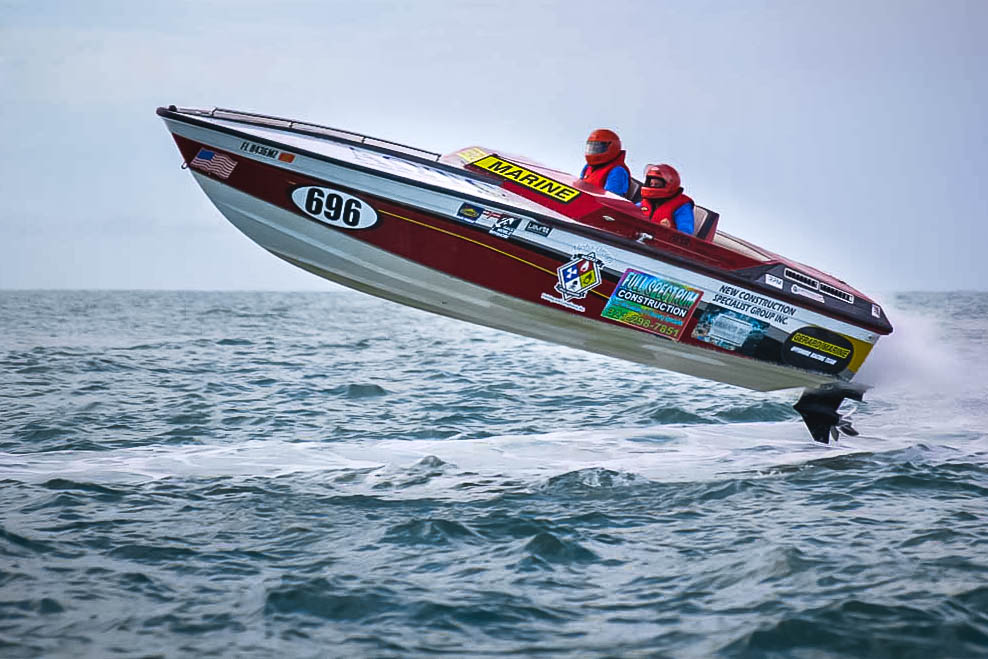 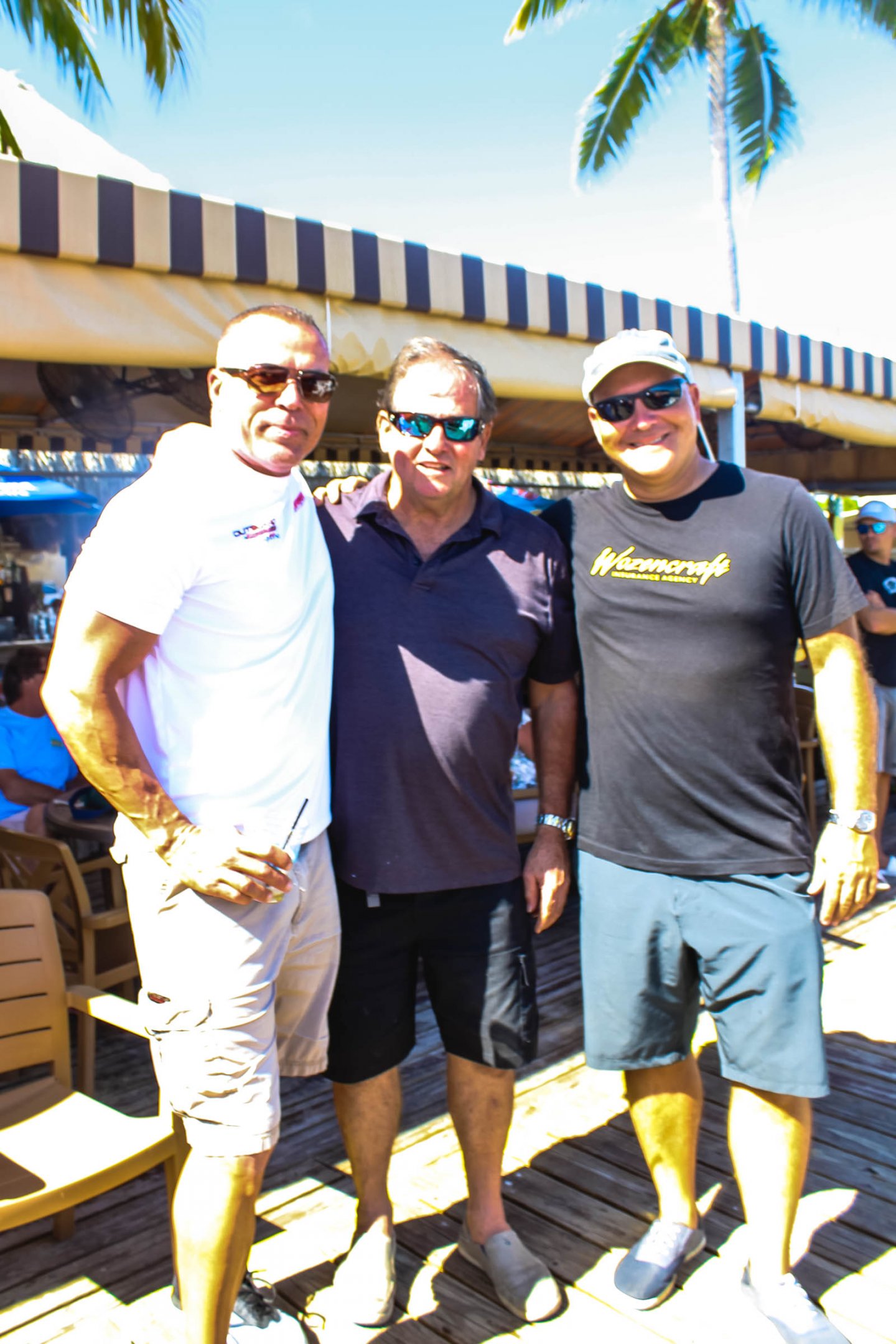 Off the podium Cigarette Racing Team (CRT) scored its own first place accolades. Picking up where the manufacturer left off two weeks prior at the Fort Lauderdale International Boat Show with its #GetOnBoard campaign, CRT was at its best in Key West. The flagship’s domination of the southernmost city of four miles was undeniable – sliding boats, banners and big screen broadcasts of Tirrannas and Top Guns tearing it up into every expanse of space available from the pits, to the piers to the poker run village.

As the presenting sponsor of the FPC (for the first time ever), and title sponsor for RWO, all-star hardware shining in the spotlight included the Cigarette 515 pace boat tasked with bringing pro-racers on plane during Wednesday, Friday and Sunday combat; and the Chief Racing Engines stunner with staggered 1350s keeping the center consoles company front row at the Conch Republic. Besides the badassery boats, bar staff up and down Duval Street did their part to promote the brand too, merrily modeling their iconic cult-like oval logo attire. I’m beginning to wonder if the Cigarette PR/marketing team finds time to sleep? 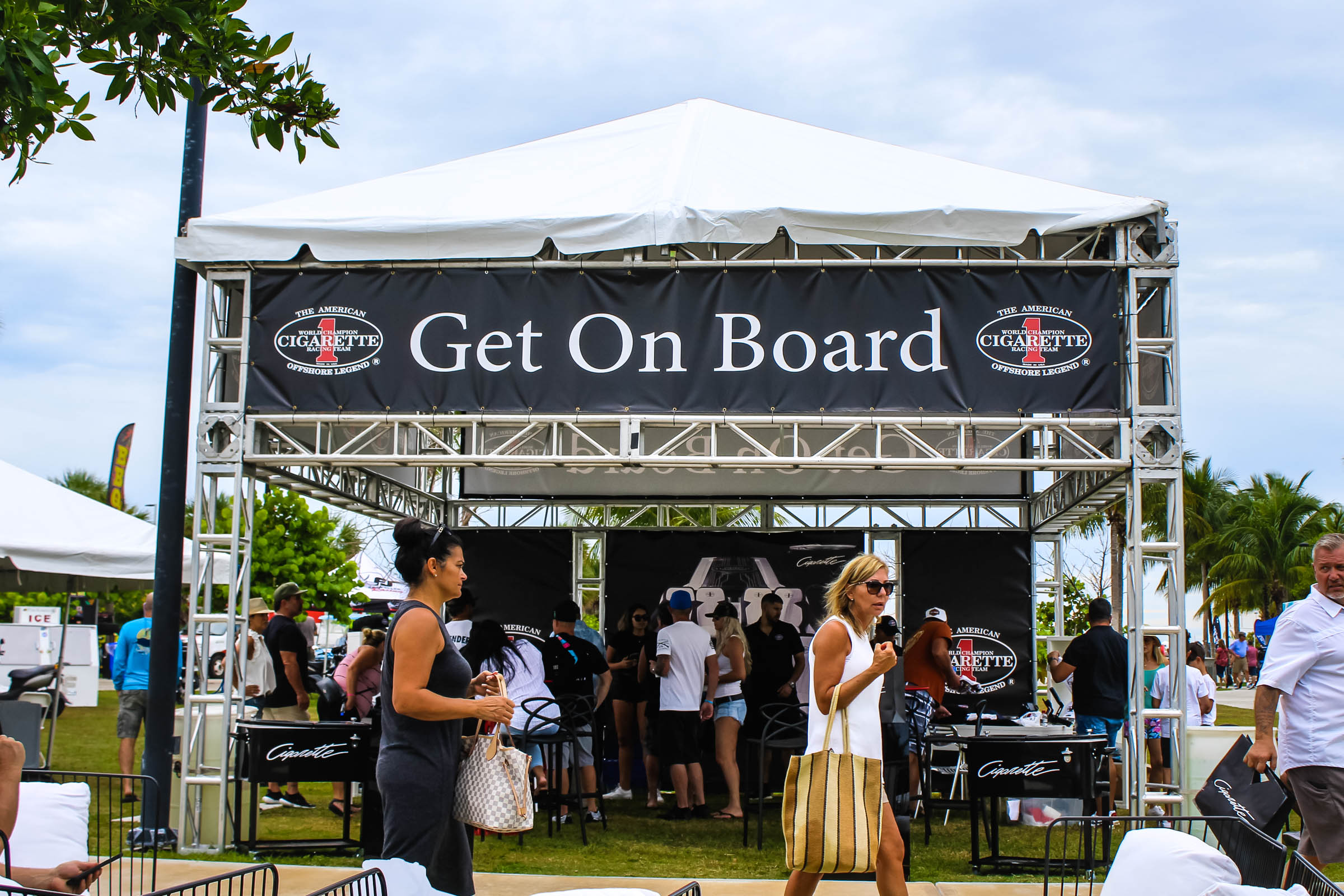 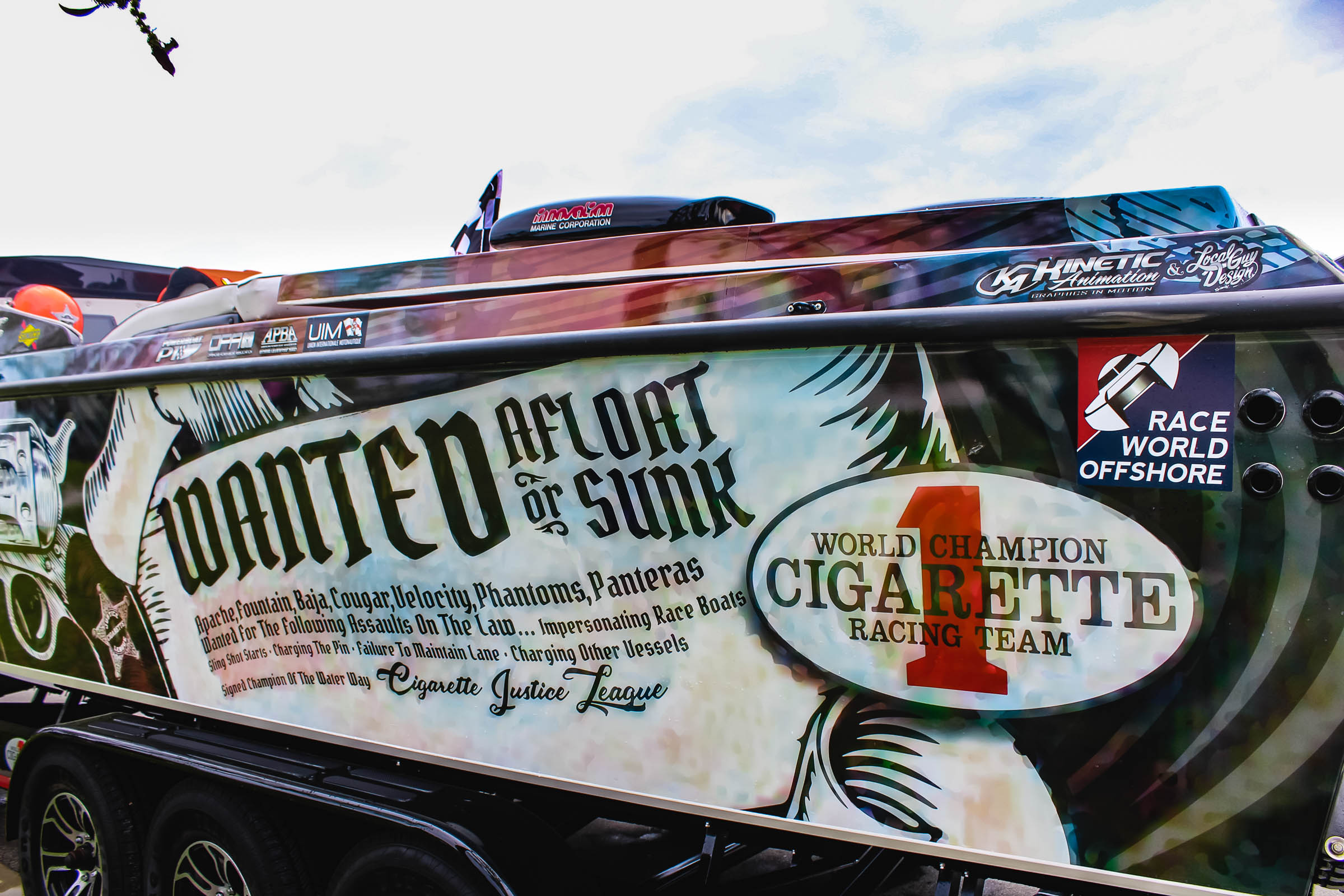 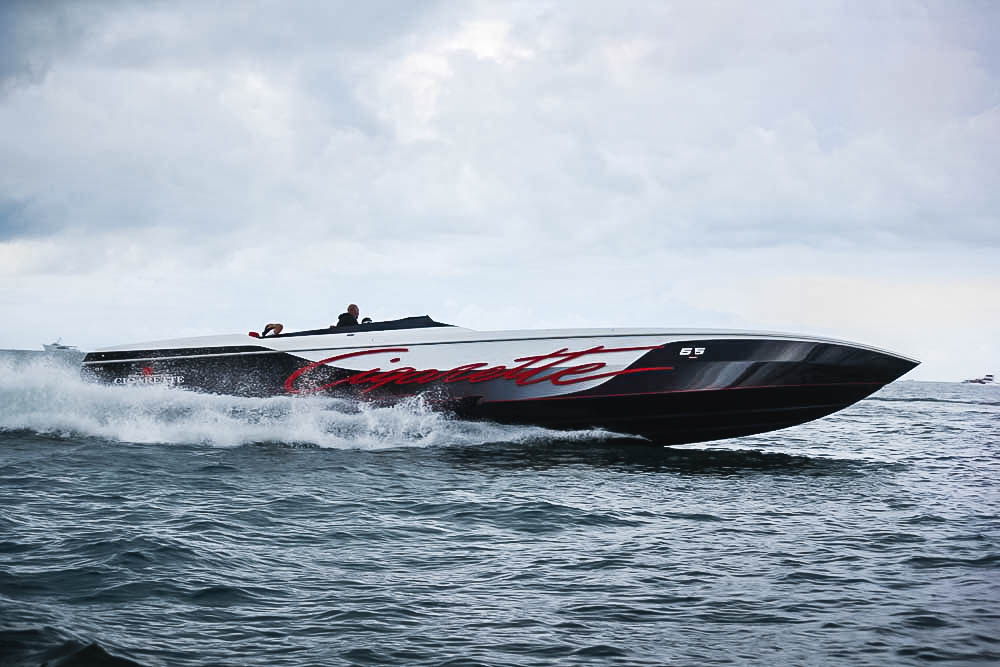 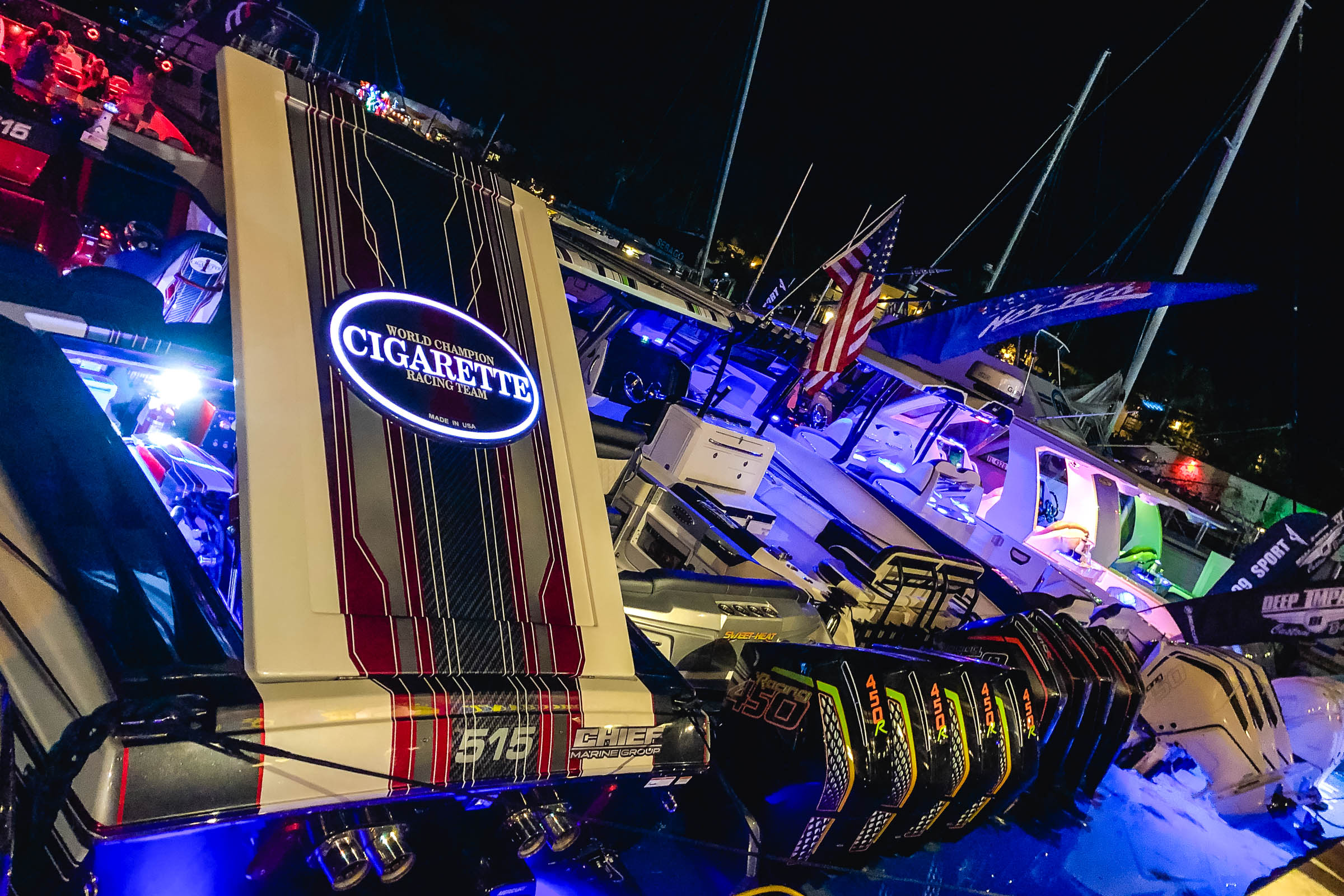 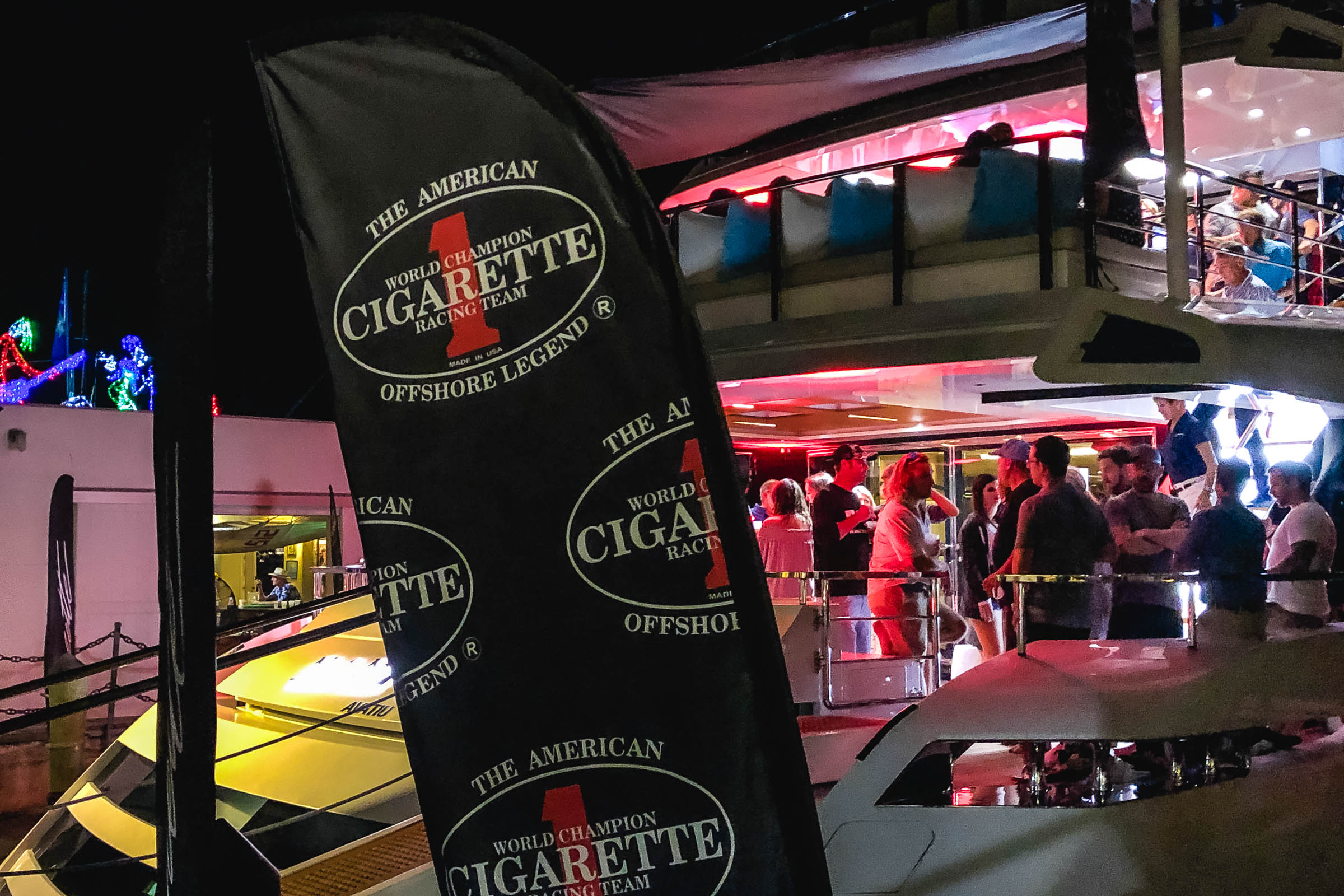 Marine Merriment​
And the kudos kept on coming… Missouri-based MTI reveled in its own bit of marine merriment winning the manufacturer’s award for most poker run boats with a staggering 52 entrants; whilst on the racing side of the spectrum, just one black and blue Factory Stock-class 390X did its part invoking emotion under the bright lights on Greene Street at the Thursday night Speed On The Water (SOTW) bash, and causing a commotion running hard among its inboard counterparts in the new 450 outboard class

Shifting course from gushing over the nautical nirvana, a shout-out of recognition goes out to all the awesome individuals involved in making the eighth annual edition of the SOTW get-together at the Sandbar Sports Grill one for the books, thanks to the generosity of our go-fast family of both boat and business owners.

Organized with the assistance of Yvonne Alemán and Greg Harris, the event benefiting the local charity Samuel’s House pulled in over $80,000 dollars, nearly doubling the 2019 total. Two premium goodies raking in ten grand each included the DCB Performance Boats carbon-fiber skateboard that left with Colton Moe, the son of Laurie and Jason Moe from the Outerlimits Hurry Up III; and a Stephen Miles Design (SMD) shot-ski that slid into the hands of WHM Motorsports offshore racer Billy Mauff.
Not all partygoers sped out on a skateboard or with a shot-ski, but many caught a commemorative “airborne” t-shirt being tossed off the stage thanks to Waves and Wheels and Maryland Offshore, snacked on free bites from Wozencraft Insurance and sucked back a few corn-based distilled vodkas compliments of powerboater-gone Good-Boy-Vodka proprietor Alex Pratt. For the parched looking for a lighter twist, the company also launched its new vodka-enhanced seltzer series on Veteran’s Day, and as an official 2021 sponsor of RWO, bottles and cans of all Good Boy beverages were deployed and enjoyed all the way to the Outer Mole viewing stands. 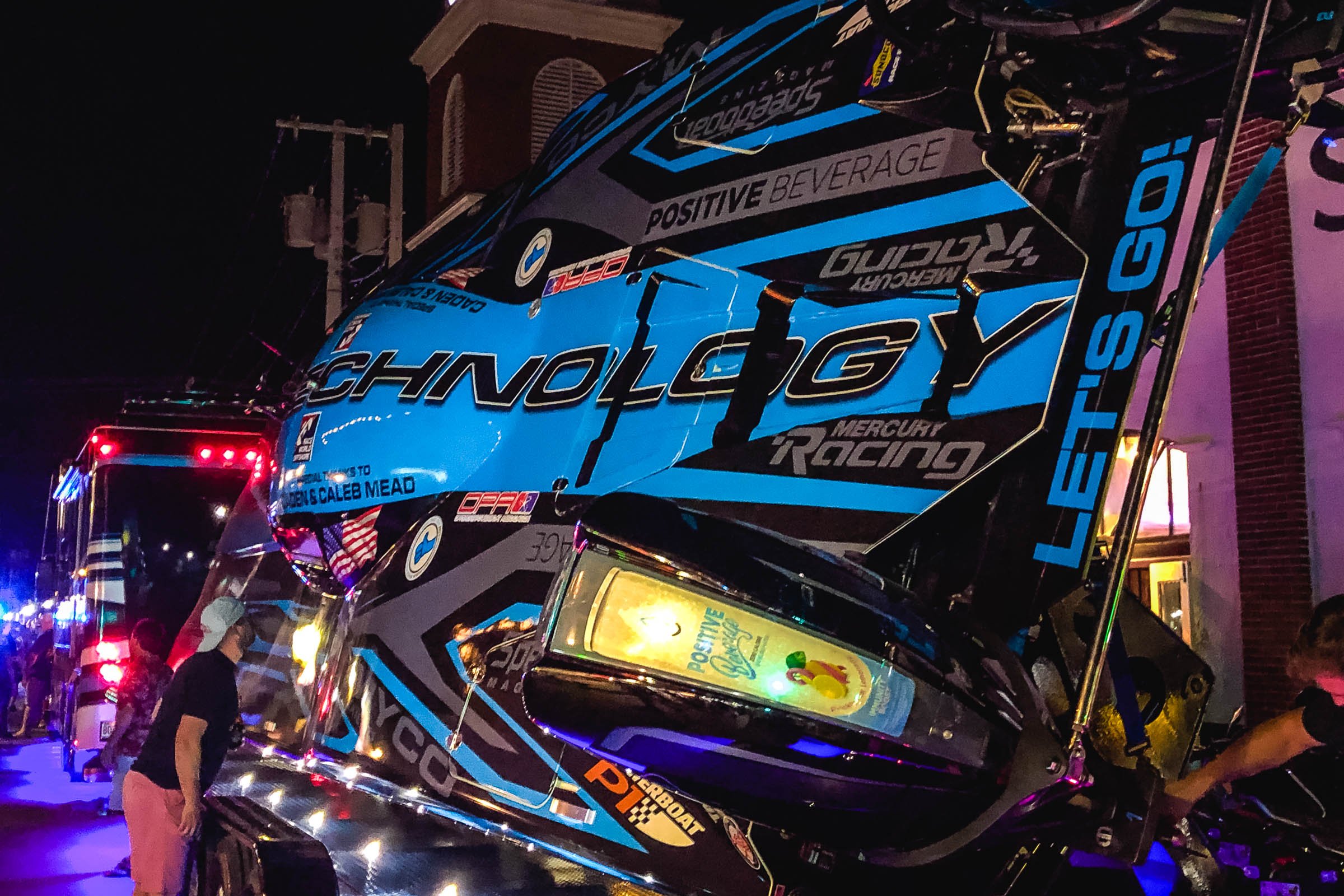 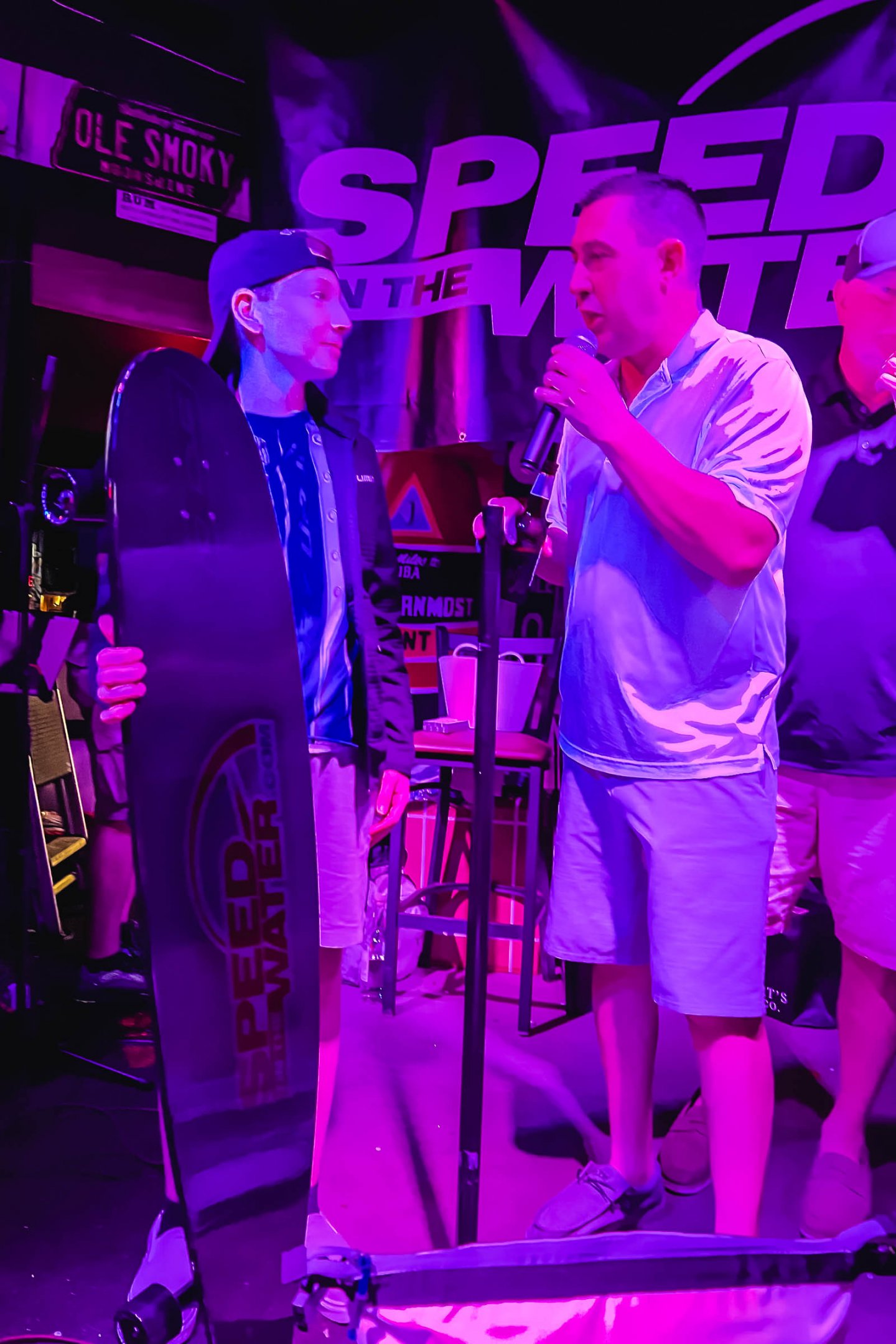 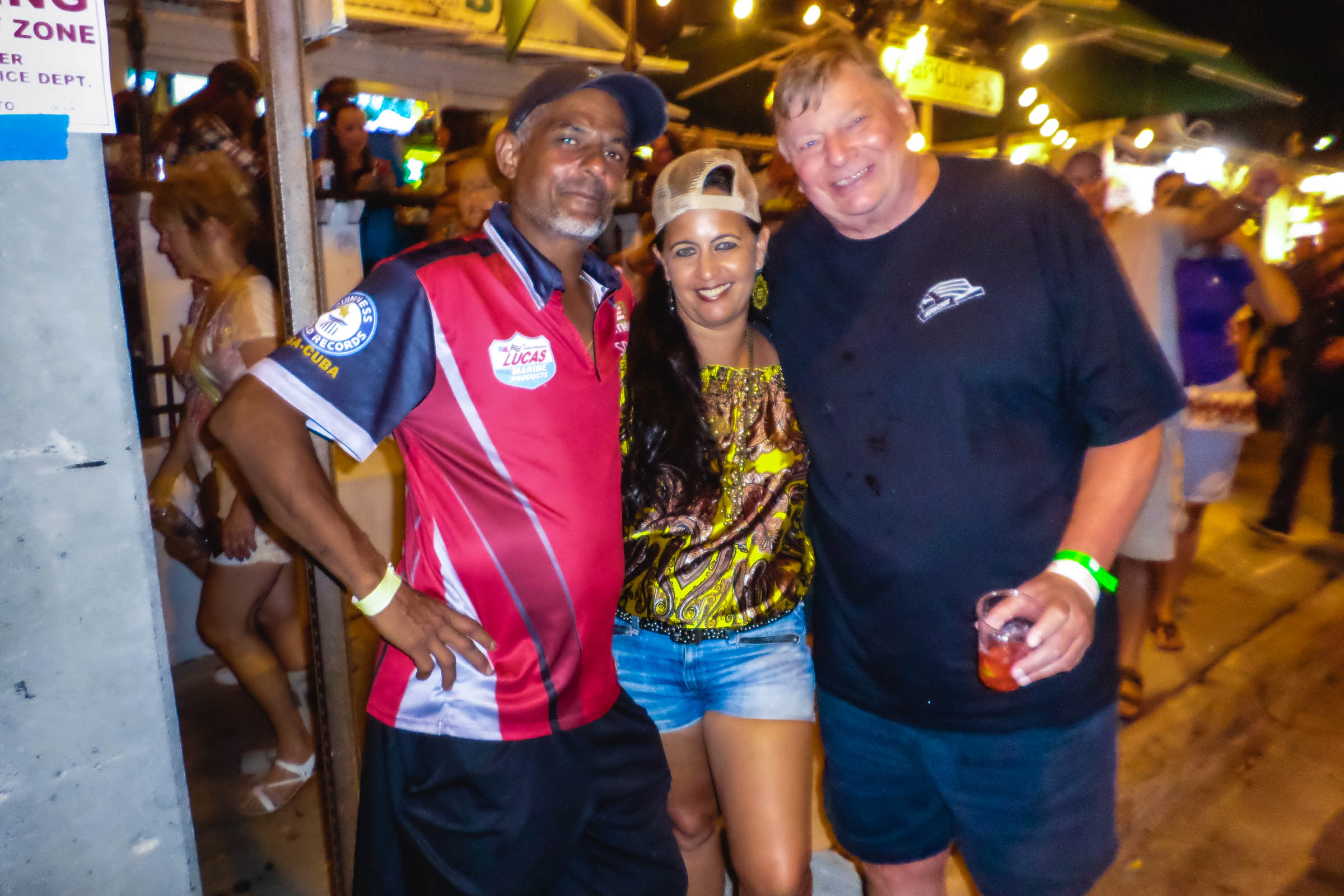 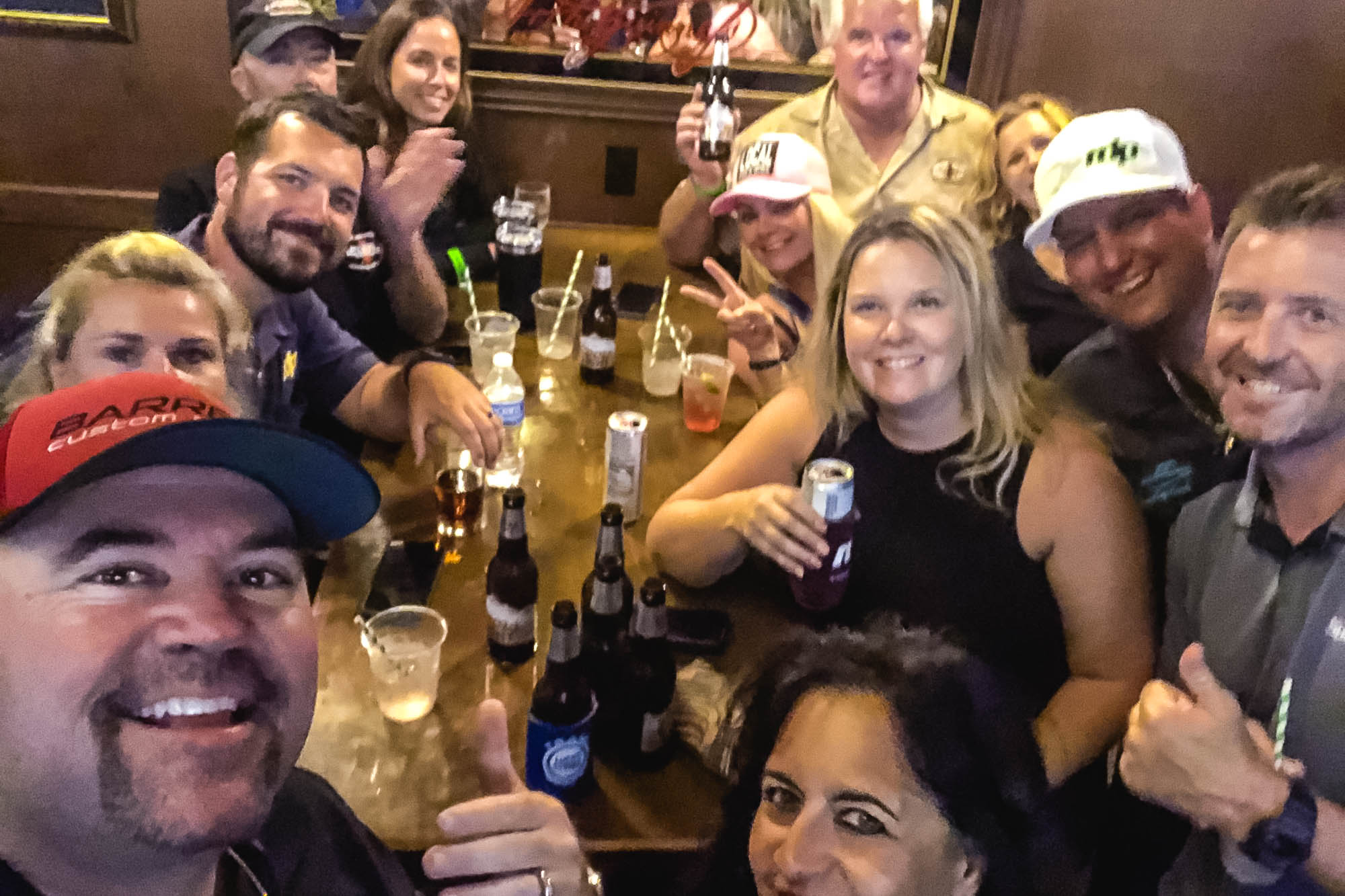 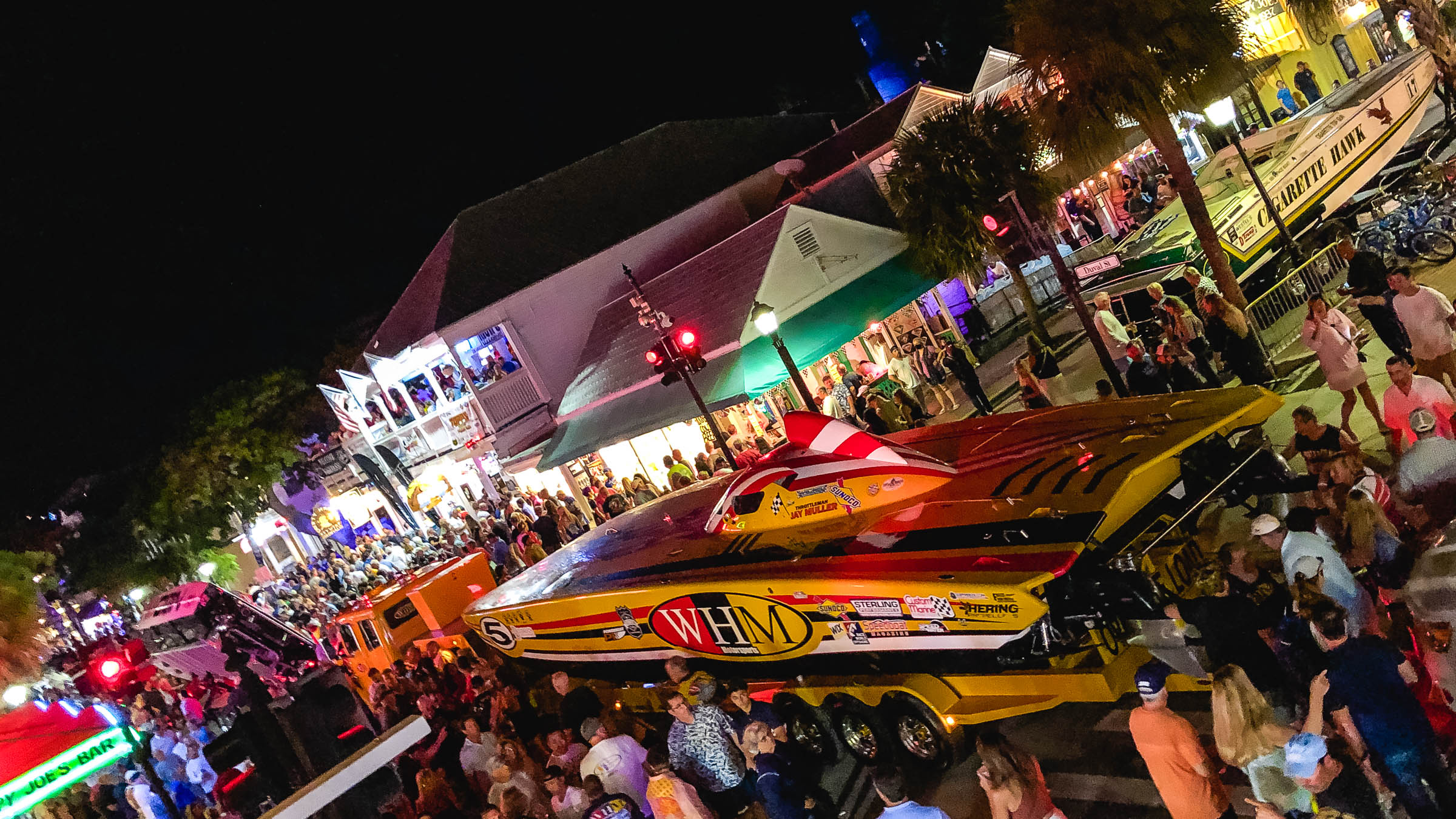 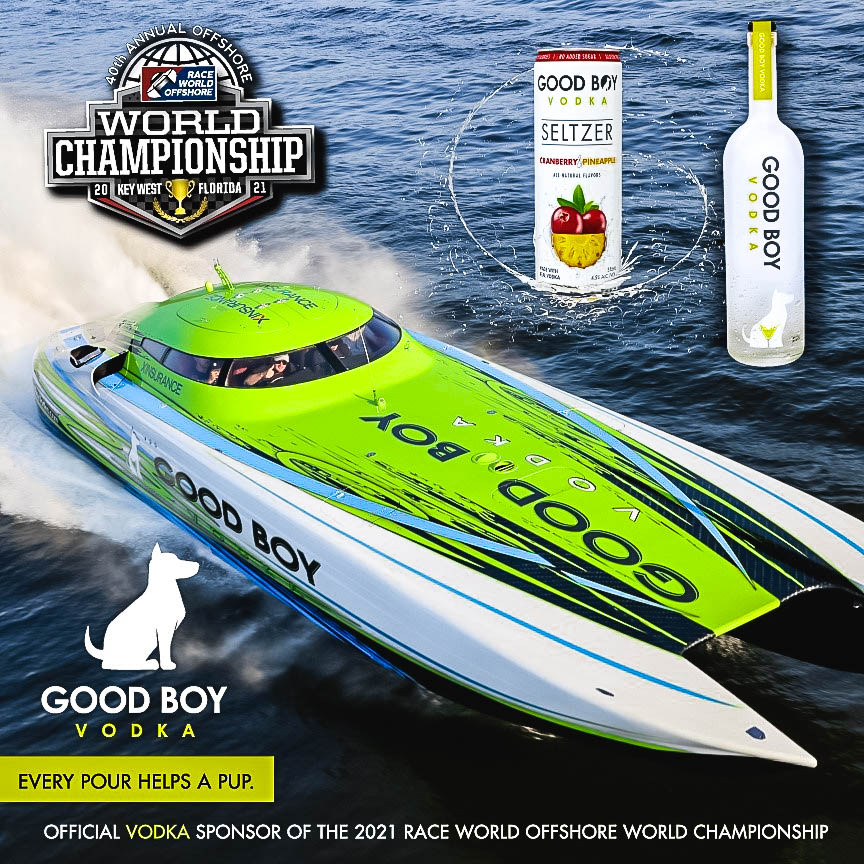 Boaters say “FJB/LGB”​
For those who derive more joy from sipping their big boy spirits and seltzers in the sunshine rather than after sundown, Saturday was the day! Morning, showers moved on out for a supreme day of extreme FPC-style indulging between your terrain choice at Dante’s Pool Bar or out in the big blue at the calendar-worthy Woman Key. The latter, ritualistic raft-up drew another record-breaking crowd which lamentably, I lost count of in the middle of my semi-enthusiastic, watermelon White Claw-induced attempt to swim the complete span of the sandbar from where we anchored. (More on that Fountain-tastic fun run adventure coming in a separate feature.)

Another visible panorama I lost count of were the F**k Joe Biden and Let’s Go Brandon embellishments sprawled across transoms, top decks and along hull sides on the entourage in attendance; towering red, white and blue flags flying above the machinery delivering the same message only further ameliorated the visual. Off the water, politics pushed its way into the powerboating scene as well, with more than a few patriots parading around town in their FJB/LGB swag and stickered-up autos, showing Americans will not tolerate the current subversion of justice born from the diabolical government’s viperous unconstitutional, tyrannical power grab mutating from two weeks to flatten the curve to 620 days to flatten your freedom.

From the look and feel of the unwavering nationalism in Florida, while the sheep continue to sleep… the lions will roar and the #FJB phenomenon is just getting started! Another phenomenon in the hot-boat hub, albeit, this one not so new but rather bouncing back in a big way, was the return of the famed Key West World Championships presently in its second year under the direction of Race World Offshore, headed by Larry Bleil. 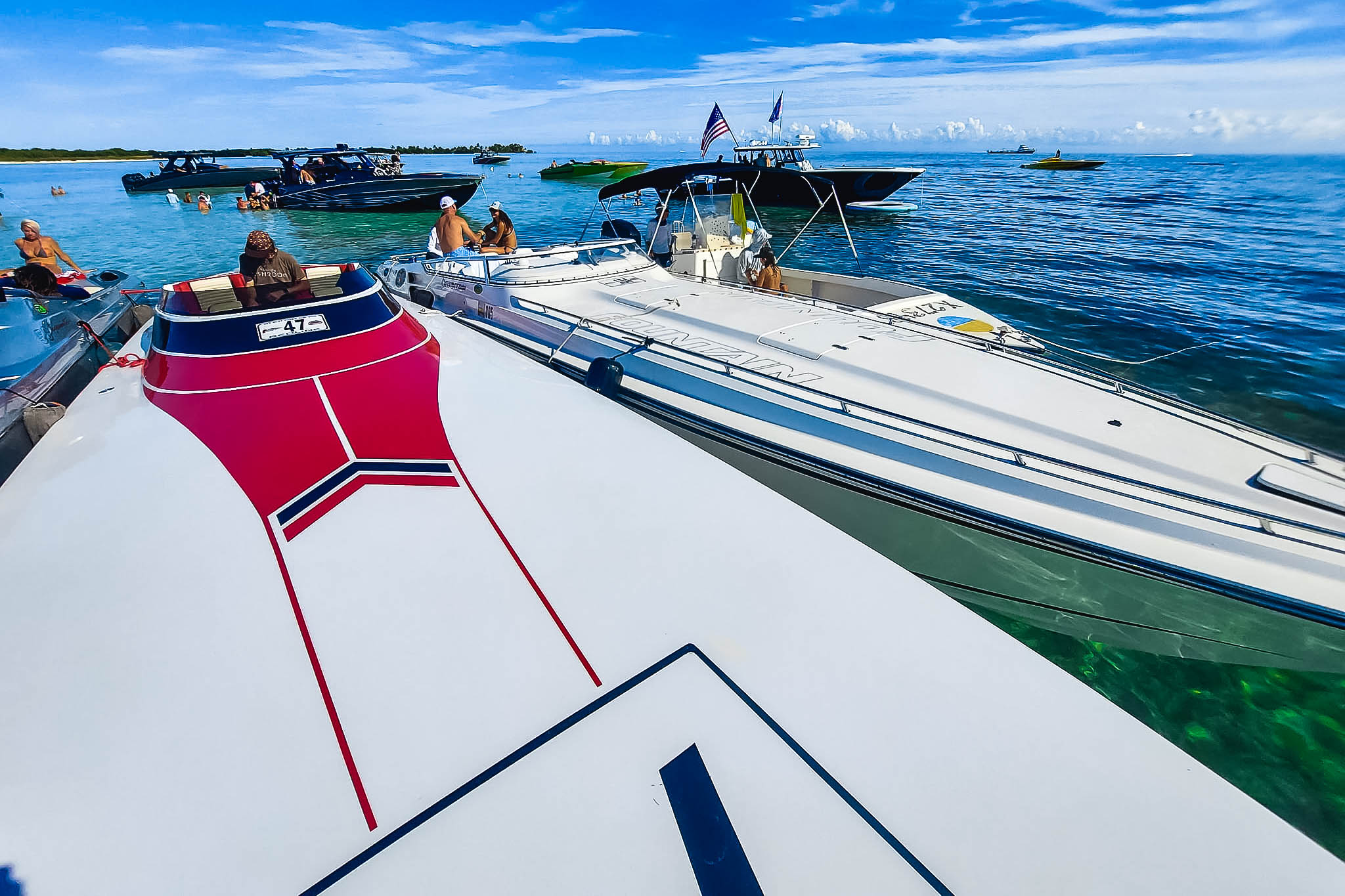 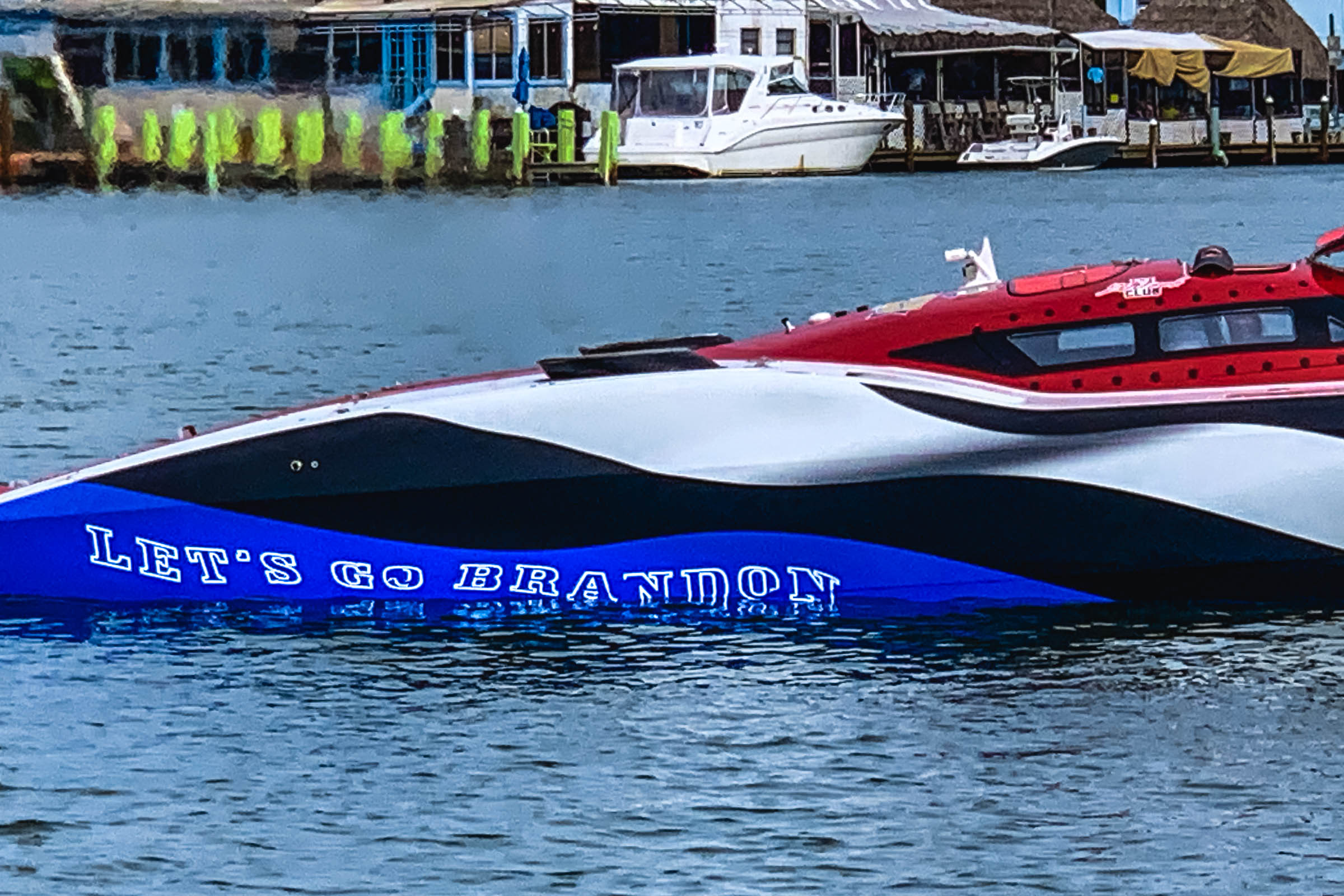 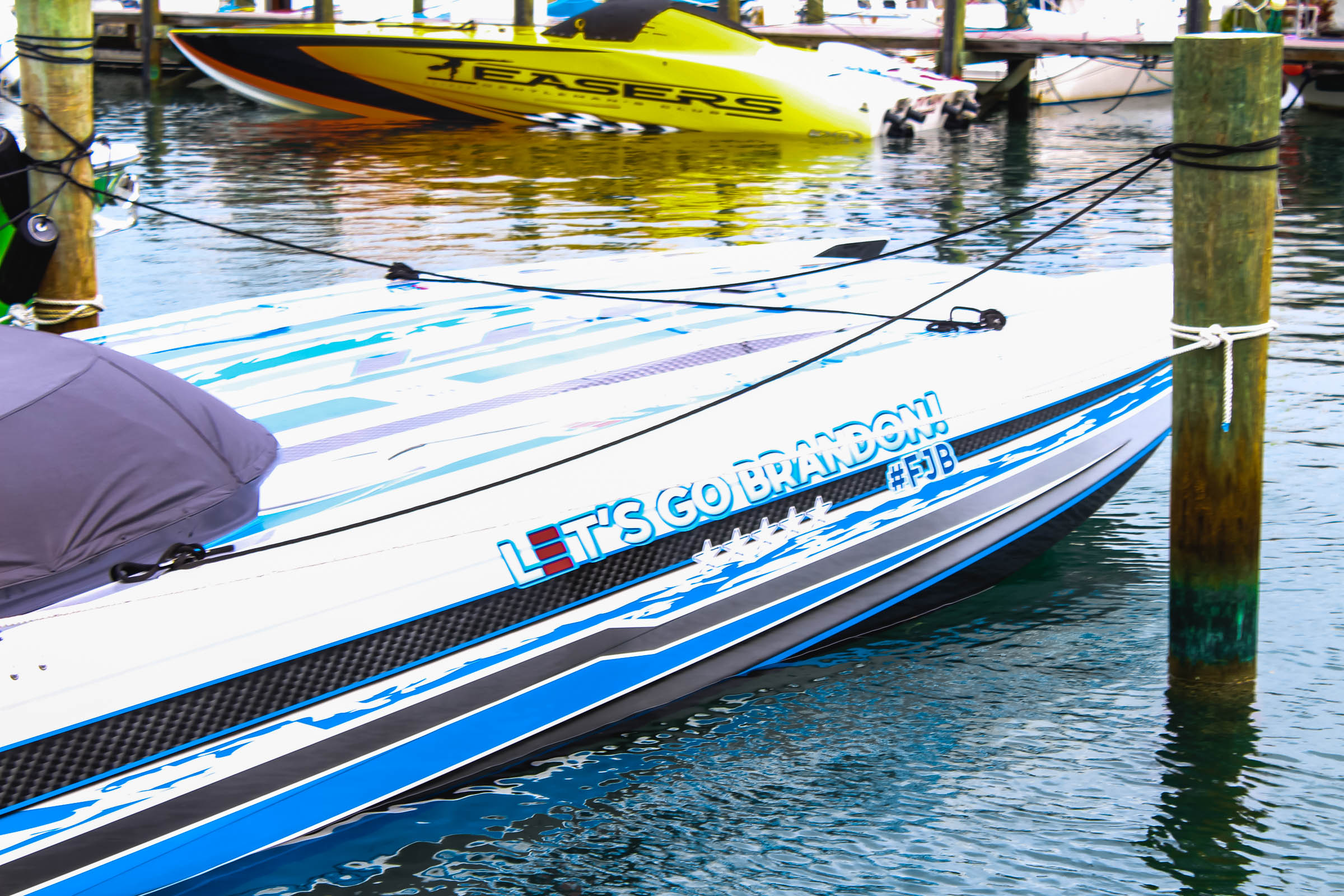 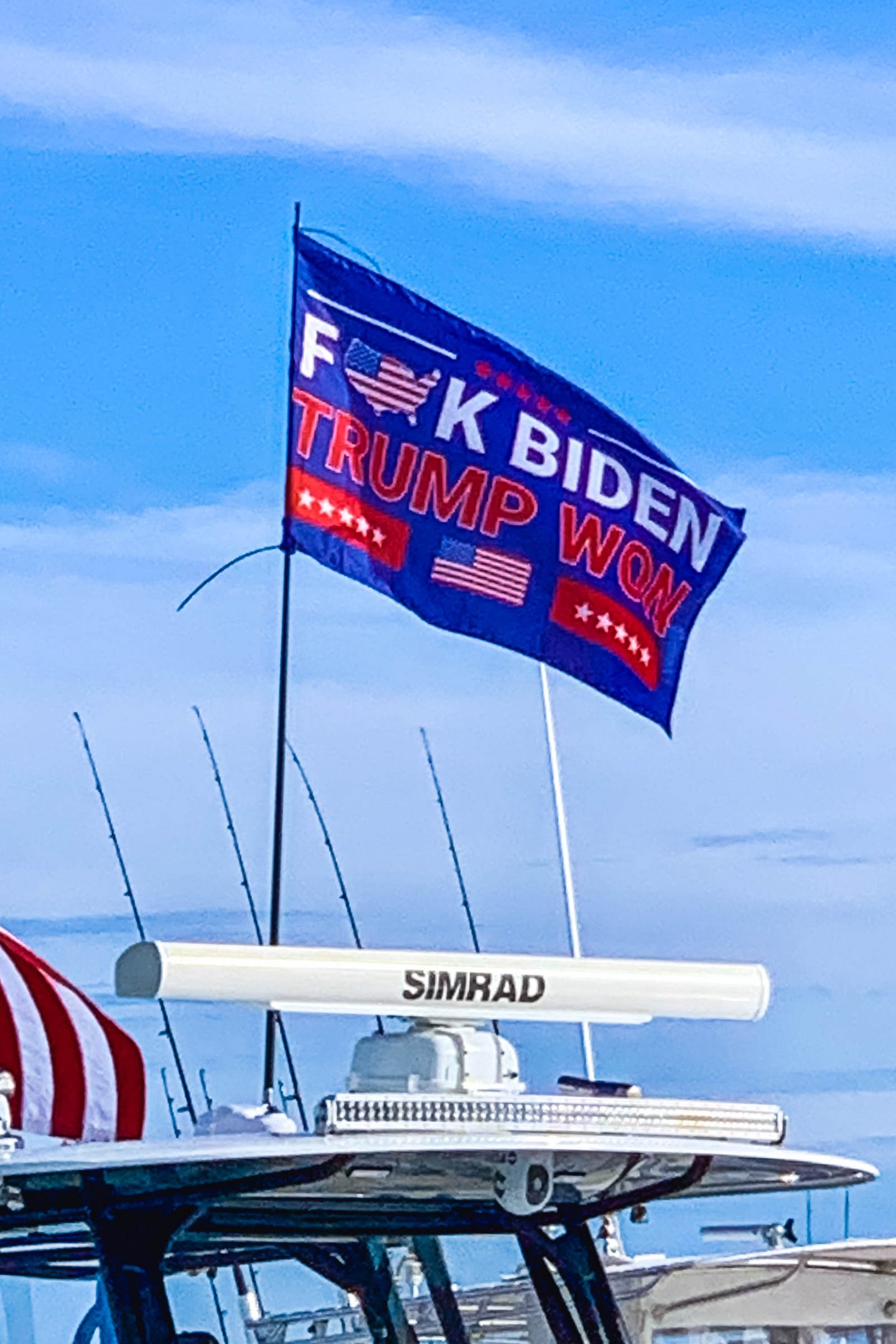 Bouncing Back in a Big Way​
Besides the slightly lower turnout due to international travel restrictions holding back some of the super-sized artillery, and the speed-capped combatants conflict of schedule with the APBA word title showdown beginning five days later in Englewood Beach – the Race World Offshore-produced APBA/UIM Offshore World Championships was a first-rate affair from the tremendous vendors and entertainment, to the uber-impressive VIP hospitality area adorned with sectional sofas, a Proseco bar and live DJ spinning beats between offshore bouts.

The biggest bounce back racing saga of the week comes from the Mod V-class Phantom Visit St. Pete/Clearwater which blew out its starboard side after a Wednesday “rubbing is racing” run in with Marker 17 Marine. What transpired after that was an around-the-clock repair session of marine magic made possible by team owner Jorge Arellano. Crew chief Ramon Vera explained, “Calvin Murphy, Alan Maiden and myself along with two locals, Robin and Brian, worked through the night to repair the fiberglass, which we completed by 1 a.m. Next, we put on a new gimbal and drive, and then came the engine and re-wiring of the bilge from the partial sinking.” Hard work yields result and not only did the crew go all out, but the duo in the cockpit must also take a bow; Nick Imprescia and Ian Morgan snagged a spectacular second on Friday, first on Sunday, and overall second place triumph.

Another inspiring bounce back came from MSP/The Firm in Stock V-class. Following a nasty roll on race day two, thanks to crew chief Daniel Gonzalez and company, Richard and Julian Garcia came pouncing back into action in MSP/The Firm for the finale. And while Mod V and Stock V classes were not without incident, you will see the most course chaos came from turn buoy traffic pile-ups in the largest 12-boat Super Stock flotilla. 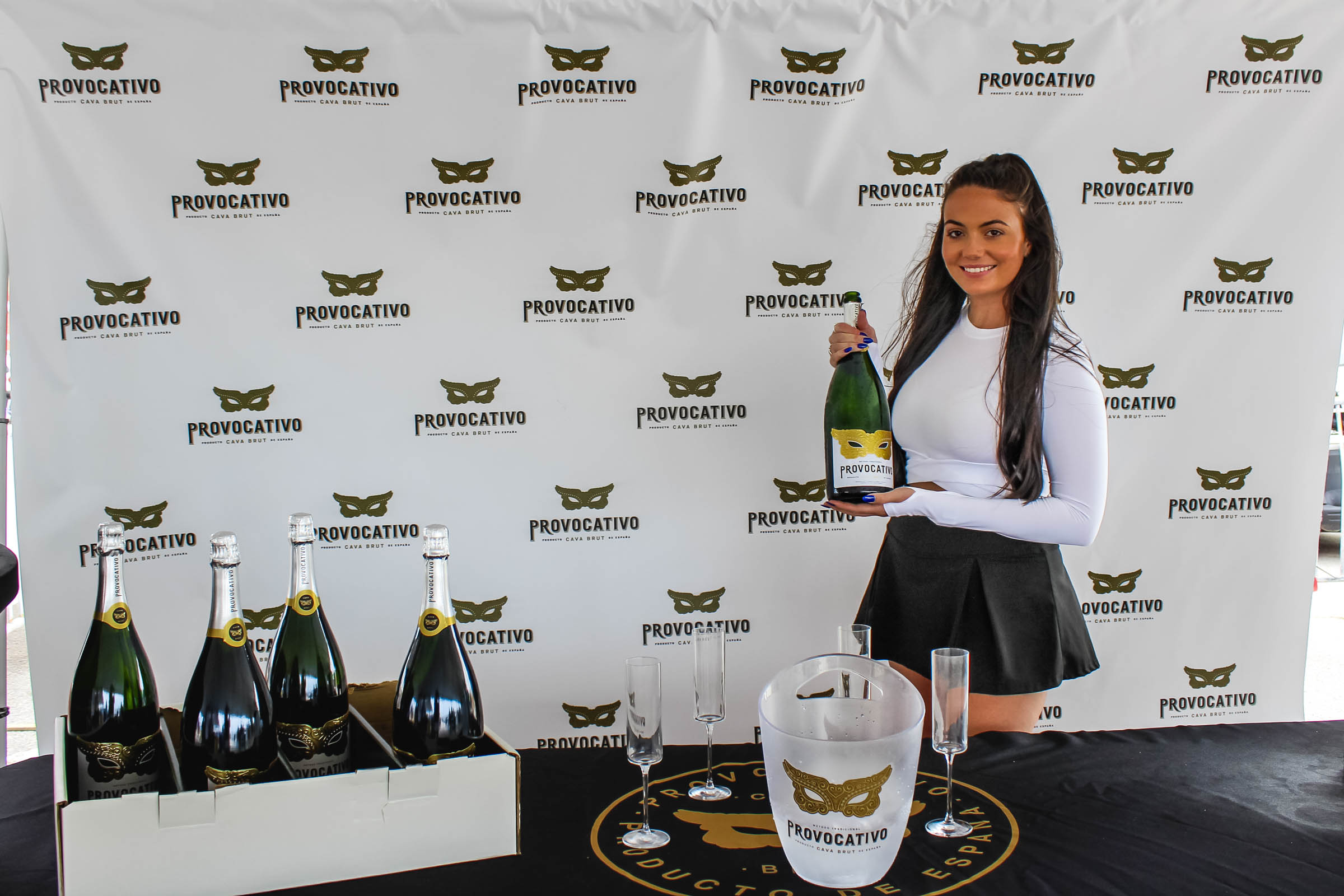 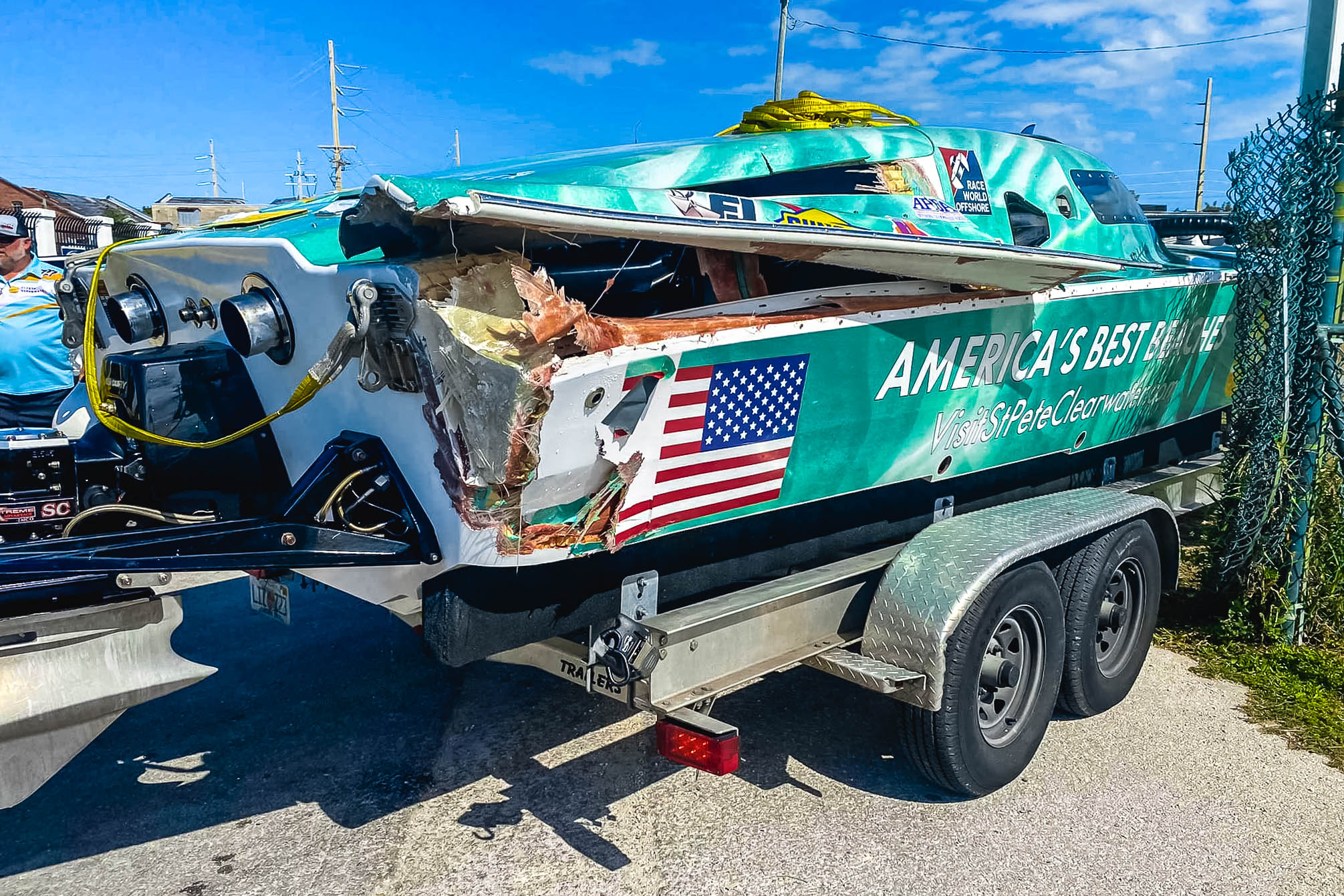 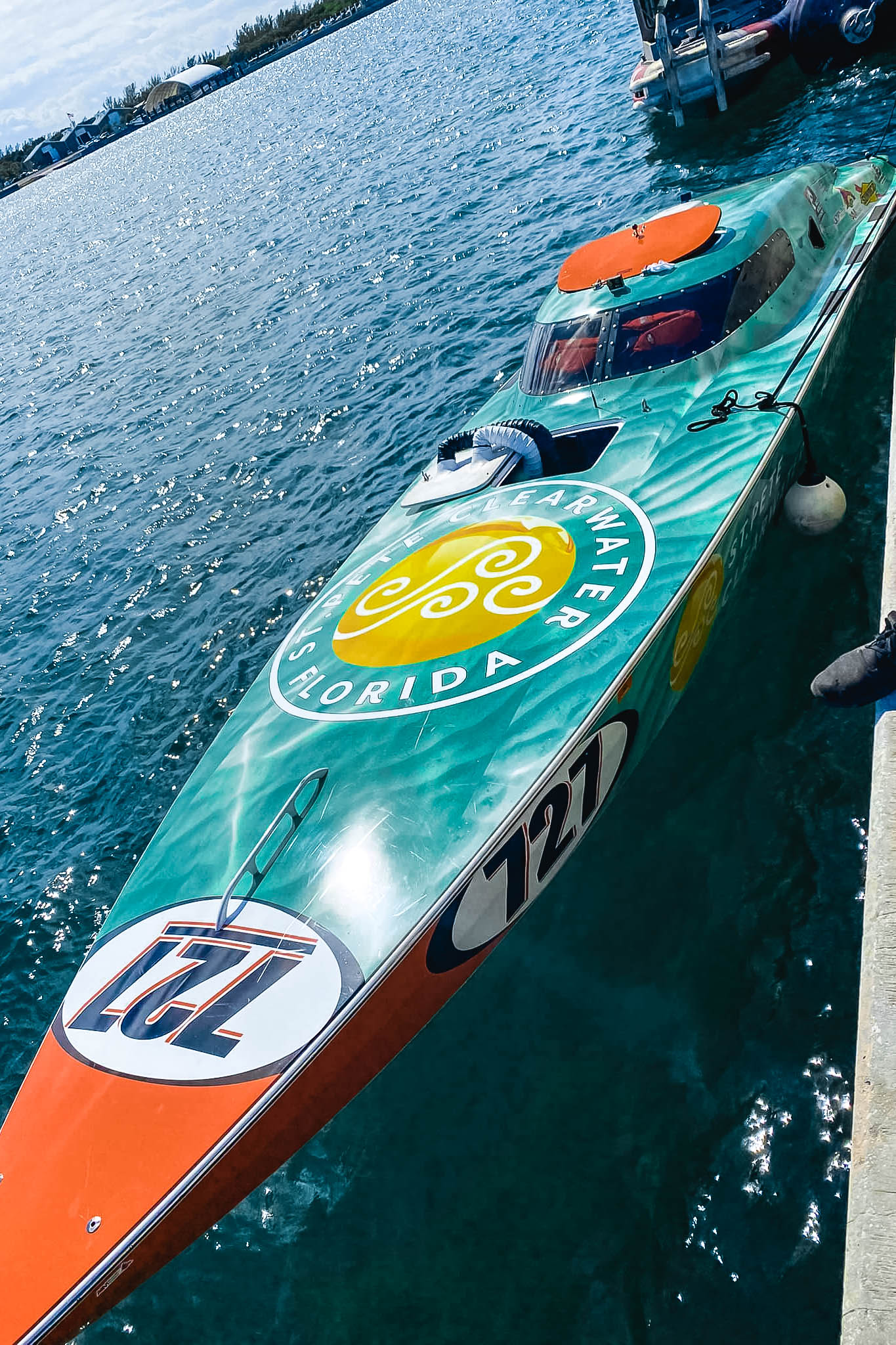 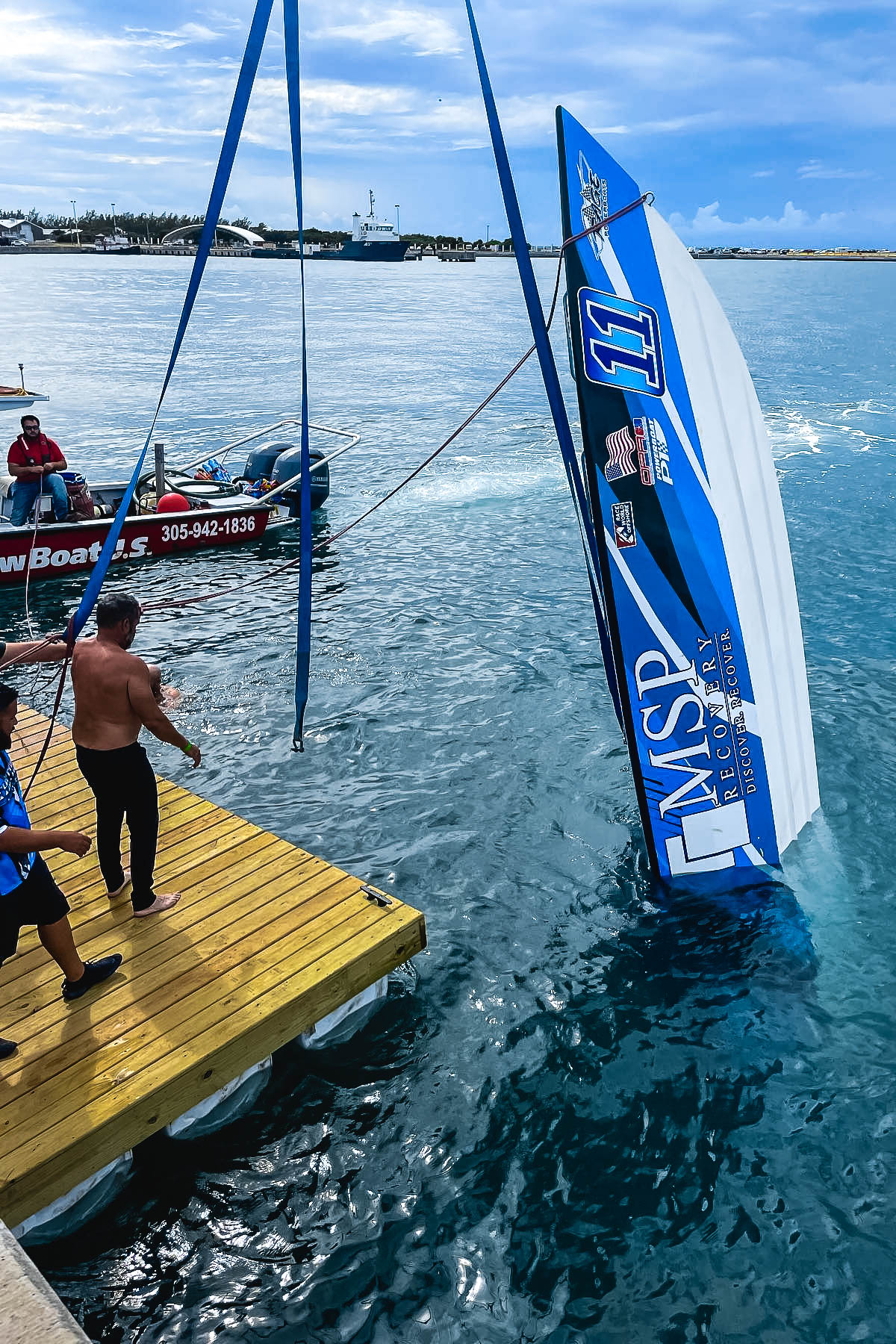 Sunday Super Stock class drama ensued from the get-go when the third race was red flagged before lap one was even done due to CR Racing/X Insurance flipping and the collision of Play Tradez and Team Allen Lawn Care and Landscaping. A 45-minute delay gave way to a re-start in which LPC Racing was quick to roll on the inside turn; it was a familiar feeling for the racers none the less, since a similar scenario played out last month during the Roar Offshore Fort Myers battle. At the end of the shortened seven-lap scrimmage,Jackhammer seized the Sunday lead, and Performance Boat Center grabbed the podium gold on accumulated points.

Supercat-class reeled in a series of offshore racing big fish in their six-boat convoy with Myrick Coil doing double duty moving from Super Stock PBC into M CON with owner/throttleman Tyler Miller in the Sterling Performance engine powered Skater 438; John Tomlinson joined Lorne Leibel in the Canada Homes Skater 388 fresh out of the 450R outboard-powered MTI; and Brit Lilly followed suite arriving from LSB/Hurricane of Awesomeness (and a three-peat of wins and world title with Kevin Smith) in Stock V-class to fill the shoes of Billy Mauff next to Jay Muller in WHM Motorsports.

Positions in offshore racing change faster than the tides and though M CON headed into the double-point, double-lap Supercat-class finale looking solid with two wins, breaking down on the forth lap changed that sultry scene, and set the stage for WHM Motorsports to nail the Sunday face-off. However, it would be Canada Homes doing the boasting with the world championship trophy and Tomlinson – who celebrated his 15th World Championship Key West win – doing the toasting.

After trading his yellow Team Geico garb for red Huski Wear/Alegra Motorsports gear, Sir Steve Curtis did his thing in Superboat Extreme-class, in the same previously campaigned 50-foot Victory cat alongside new running mate and sportscar racer, Carlos de Quesada. Prepare to see more of this team in 2022 once its 47-foot Victory is splashed. 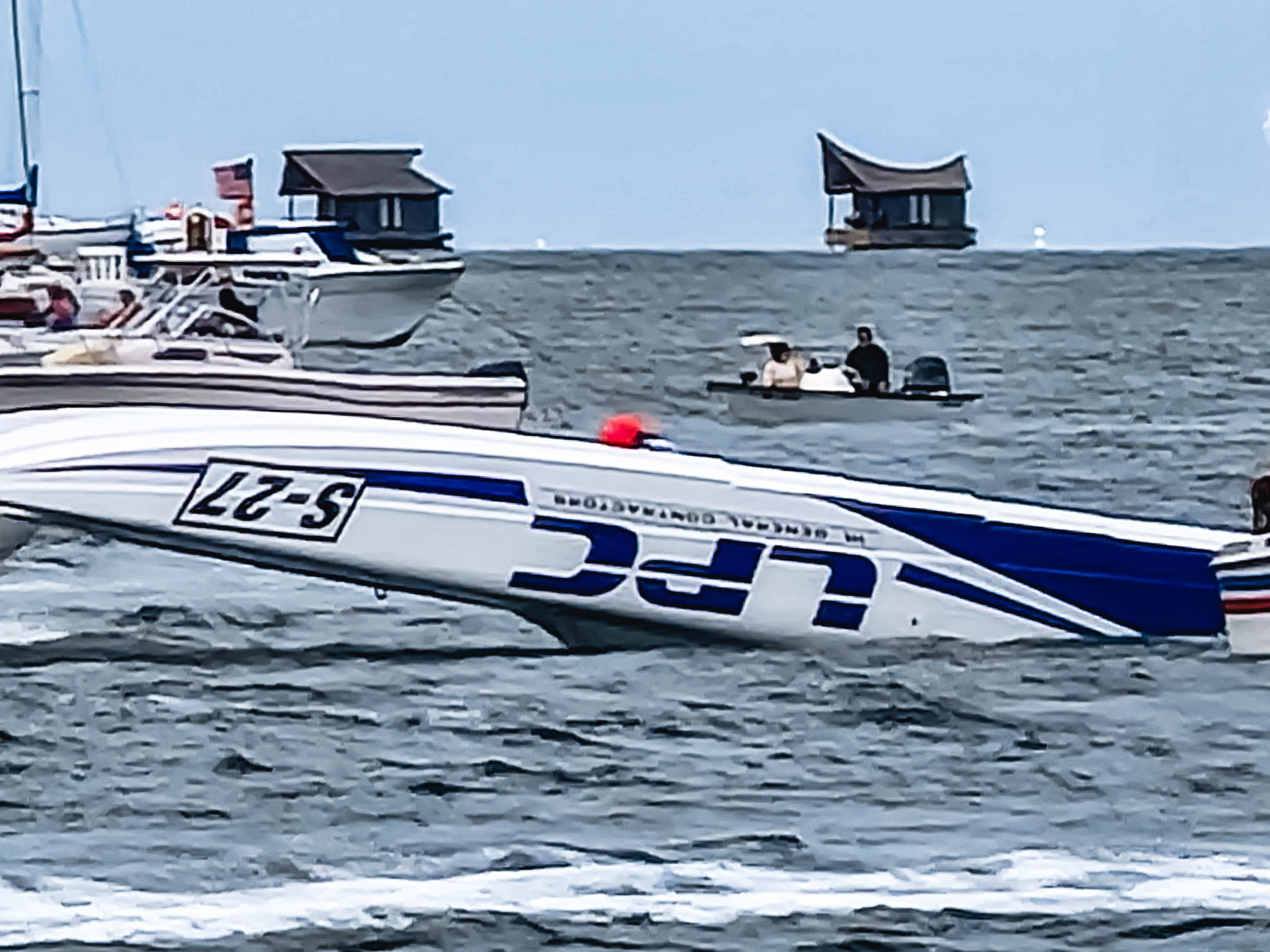 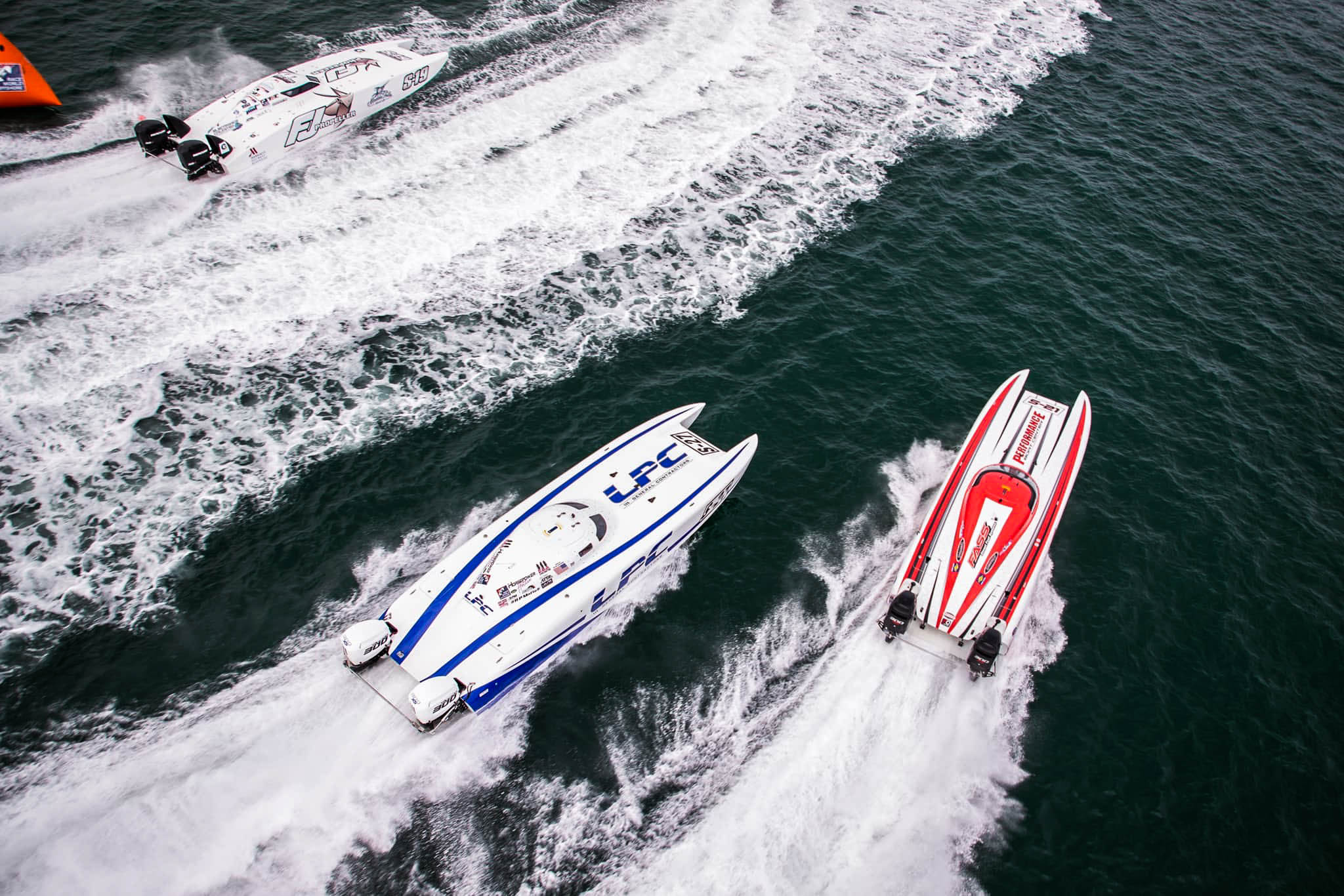 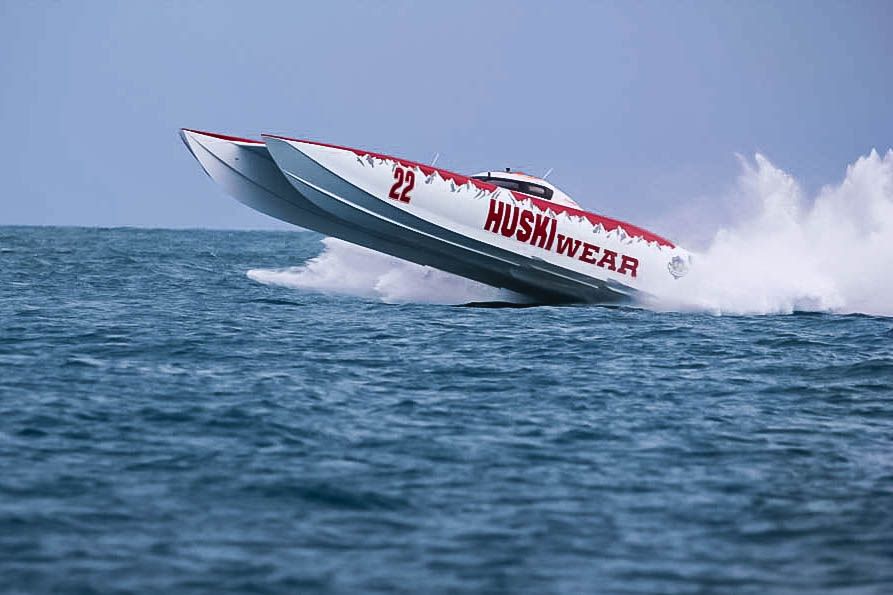 As the always-epic Key West Worlds winded down, the most important take away was that all racers (and fun runners included) returned home safe and sound after all the trills and spills. Tragically, our boating community did lose one of its own in Miami and in closing; luxurycenterconsoles.com would like to remember Rey Marino. The founder of Hellkats Powerboats departed Pelican Harbor to test a new 32-foot cat on Tuesday November 9th and was later found in Biscayne Bay. Marino will be remembered as a true pioneer and entrepreneur in the world of powerboating!

Live it accordingly, like it’s your last!​
Reactions: VooDooChildZ28