THE CLEANER THE BETTER

Fuel filters are always a big deal for all powerboats. Dirty gas, bad gas, stale gas, old gas, water in the gas, etc., etc., the list of potential fuel related problems for boaters is endless. And in almost every case, it’s the fuel filter that’s the first line of defense against a won’t start, stalled or poorly performing engine.

So, will just any fuel filter do the job? Although something is better than nothing, the more efficient the fuel filter the less likely it is that your day of fun on-the-water will culminate at the trailing end of a tow rope. And this has never been more true than today, especially with the introduction of higher percentages of ethanol blends in fuels commonly found at marina gas docks.

Fuel filters are the firewall between the fuel in your tanks and the engine, collecting potentially harmful debris and contaminants from interrupting the internal combustion process. Without a fuel filter, debris has a nasty habit of finding its way directly into the intake system of your engine, plugging up fuel injectors and carburetor orifices which quickly manifest into a whole host of engine performance problems.

Fortunately, you have choices. Upgrading your stock fuel filter to a more high performance and efficient filter is not only easy and affordable, but offers an extra margin of protection for your engine from the inherent evils of dirty or contaminated gas.

The essential job of a fuel filter is to capture and contain debris that’s carried in gasoline before it reaches the engine. In the case of the RPM 350 FST Performance filter used in this example, it accomplishes this thanks to an ultra-fine internal filtering media, capable of capturing unwanted particles as small as 4 microns (3 microns on larger filter models). What’s also unique about it, however, is that the all-important flow capacity is not compromised because of its extraordinary high level of filtering. In fact, FST Performance filters are rated to flow in excess of 300 gallons per hour, far more than the appetite of even the most fuel-hungry high performance marine engines.

As you might imagine, the FST Performance brand has become a favorite among racers as well as the general boating public. Not only are their filters compatible with regular pump gasoline, but an assortment of racing fuels including ethanol and methanol. And just for diesel and bio-diesel applications, there are models with the TurboFyner system.

If there is one basic fuel issue boaters find themselves fighting today it’s the ethanol problem. Today’s E-10 (and in some cases E-15) blend has changed the way we think about the gas in our tanks. Because of the ethanol content, gasoline is far more susceptible to water intrusion and separation, especially when left in tanks for extended (more than 90 days) periods of time. This is where a dual purpose filter with water separation capabilities like the RPM 350 really pays for itself (the complete package retails for about $170.00 plus tax and shipping). It won’t prevent the separation problem from happening in your fuel tank, but with its water shedding internal filter media and capture reservoir beneath, fuel flow is not compromised should it occur. It is recommended, however, that the fuel filter be internally inspected on a regular basis so corrective action can be taken if these kinds of problems persist.

To illustrate just how easy it is to install, we enlisted the services of one of the top service, repair and high performance installation/rigging experts, Prime Marine, in Rancho Cucamonga, California (909) 484-8338. Owner Mike Ramirez performed the swap in less than an hour needing only the most basic hand tools and a bench vise. 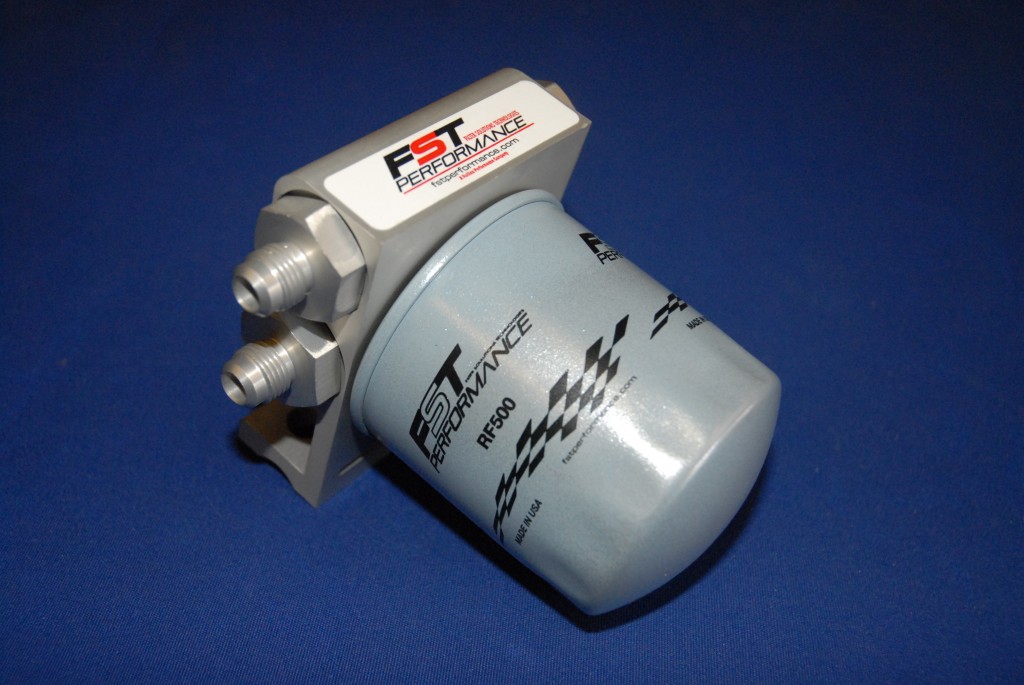 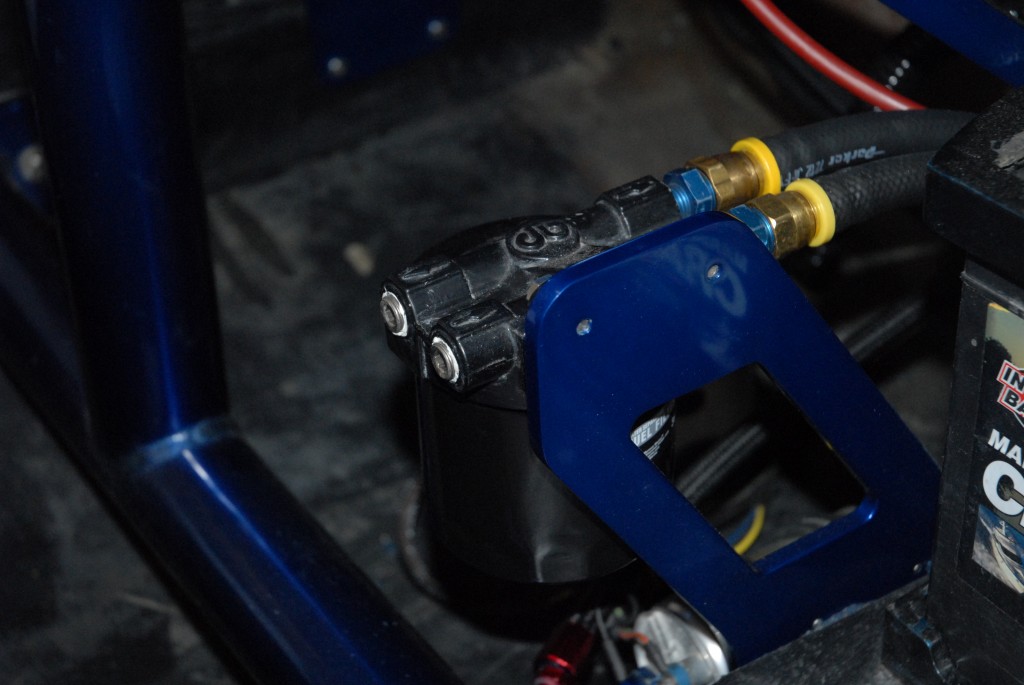 We’re replacing the stock fuel filter seen here. Since this is a single tank application, only two fuel ports are used, an ‘in’ and ‘out’. 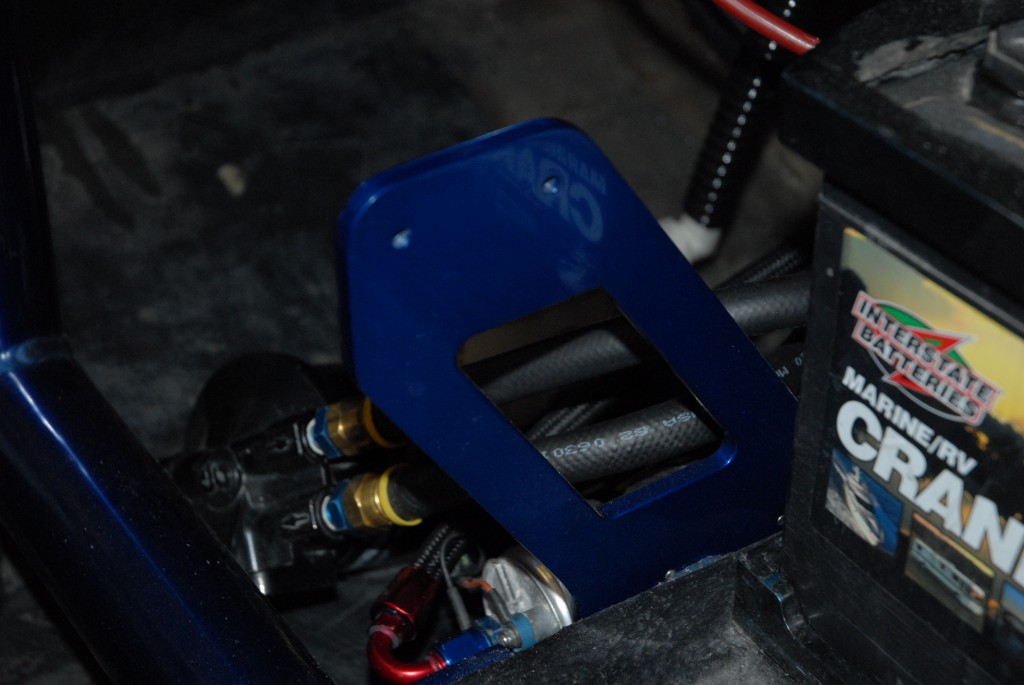 The first step is the removal of the existing fuel filter from the mounting bracket. Prime Marine machined a custom anodized bracket out of .1875” thick aluminum stock and threaded the attachment holes eliminating the need to thru-bolt. 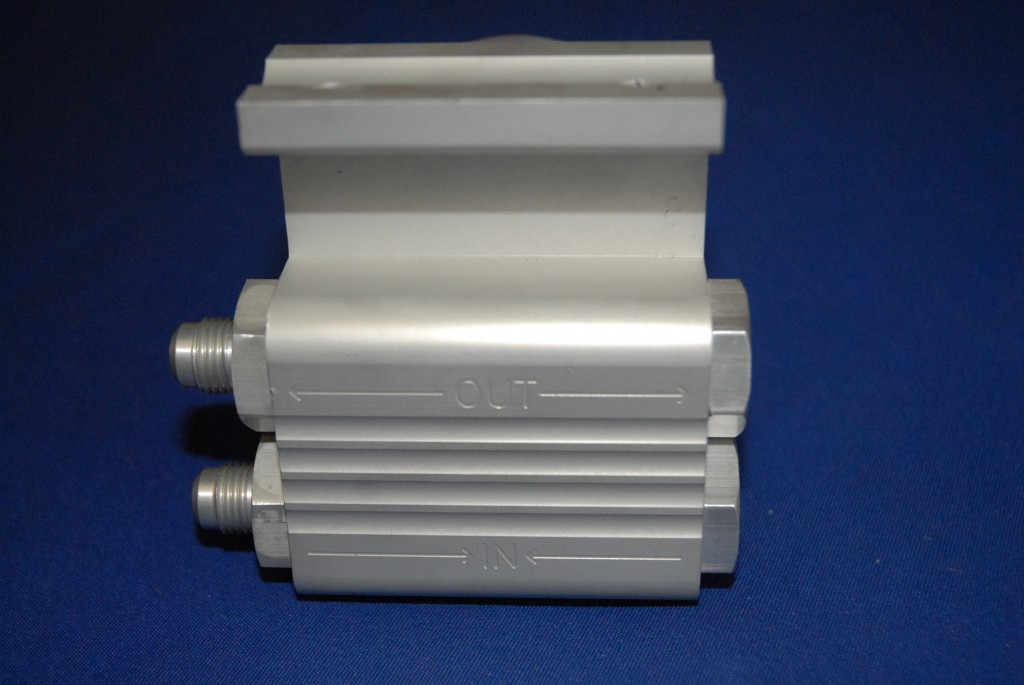 FST Performance includes a clearly marked fuel distribution manifold indicating which are intake and outlet ports. Because of its four-port design, manifolds can be plumbed to accommodate single or twin fuel tank applications. 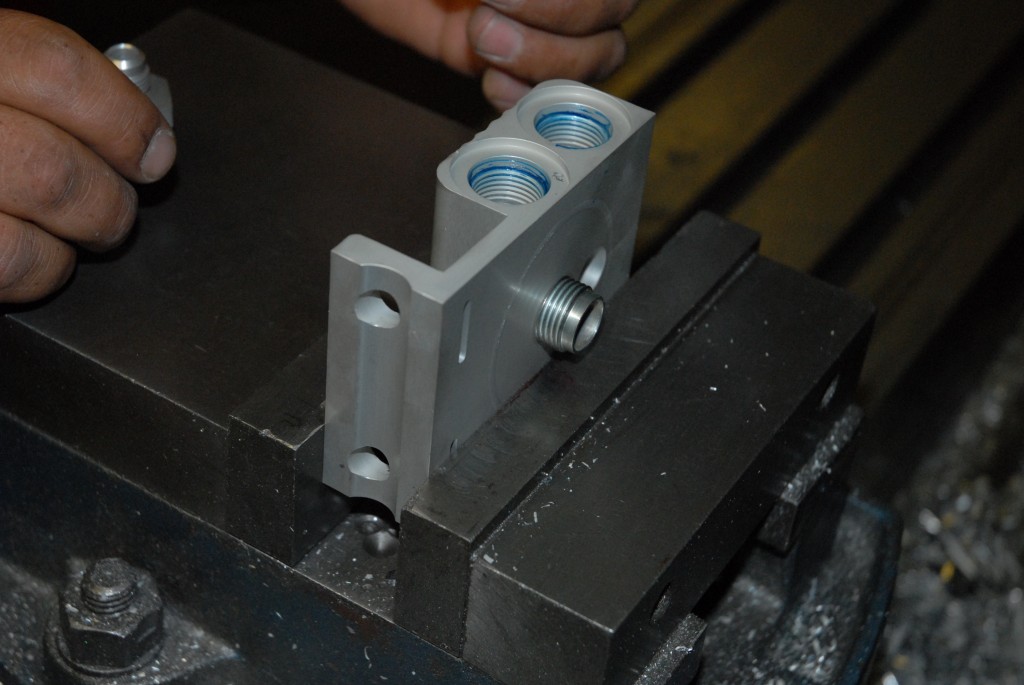 Since this is a single fuel tank application install, one pair of intake and outlet ports must be plugged while the two remaining ports get appropriate sized AN fittings for the fuel hoses. To prevent thread galling during installation, a light application of oil helps avoid potential thread damage. Teflon thread tape is not necessary. 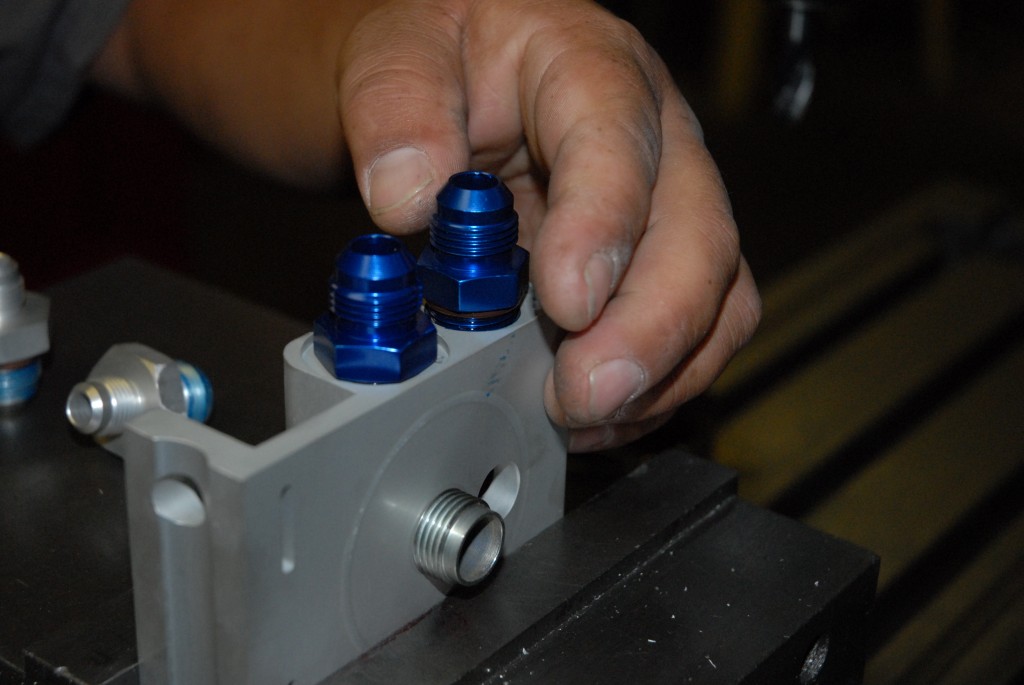 The AN fittings should be tightened snuggly into the manifold body, however, be careful not to use excessive torque or thread damage may occur. 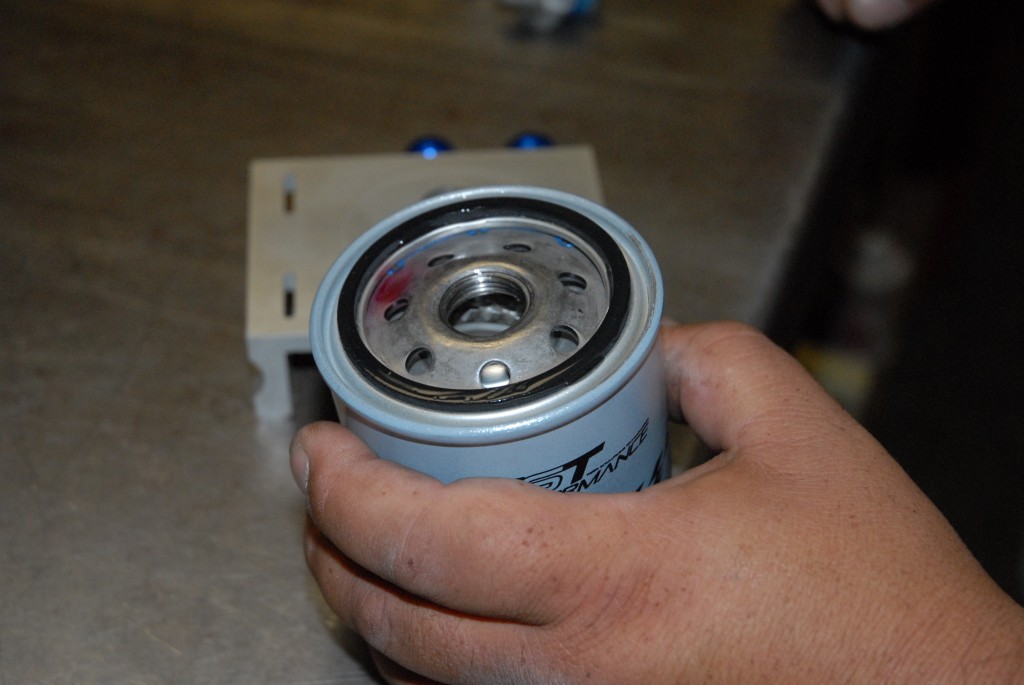 Now that the fittings are secure, it’s time to attach the spin-on canister. Note the canister comes with its own gasket. Again, apply light weight oil sparingly to the threads and around the rubber gasket for a better initial seal. 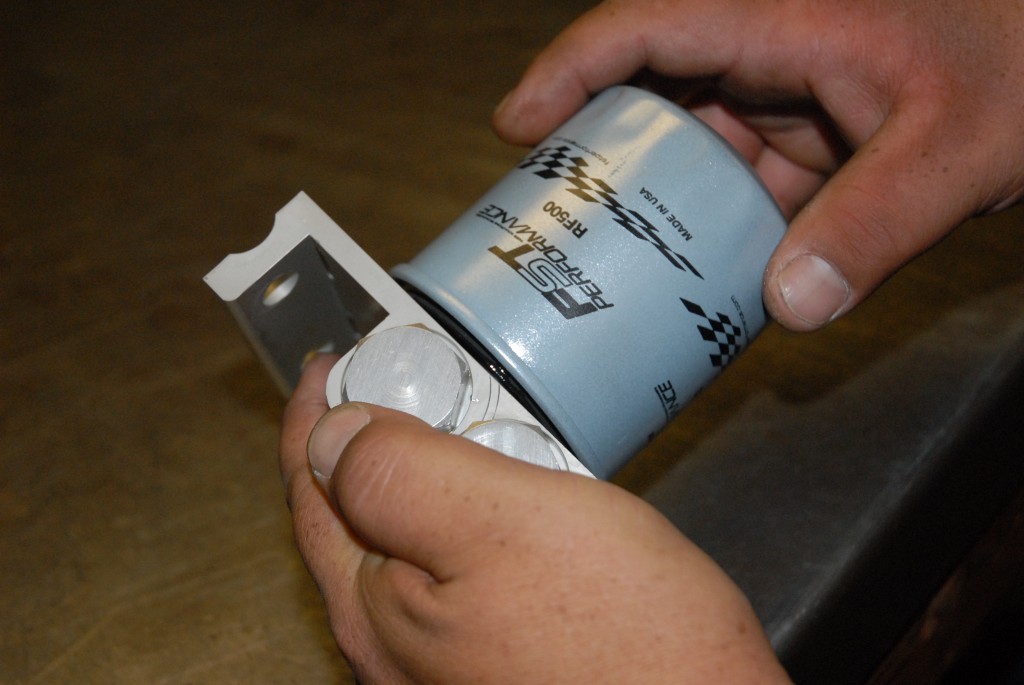 Now, screw the canister to the manifold body in a clock-wise manner. Tighten snugly but don’t use excessive torque that might damage the canister body, gasket or threads. 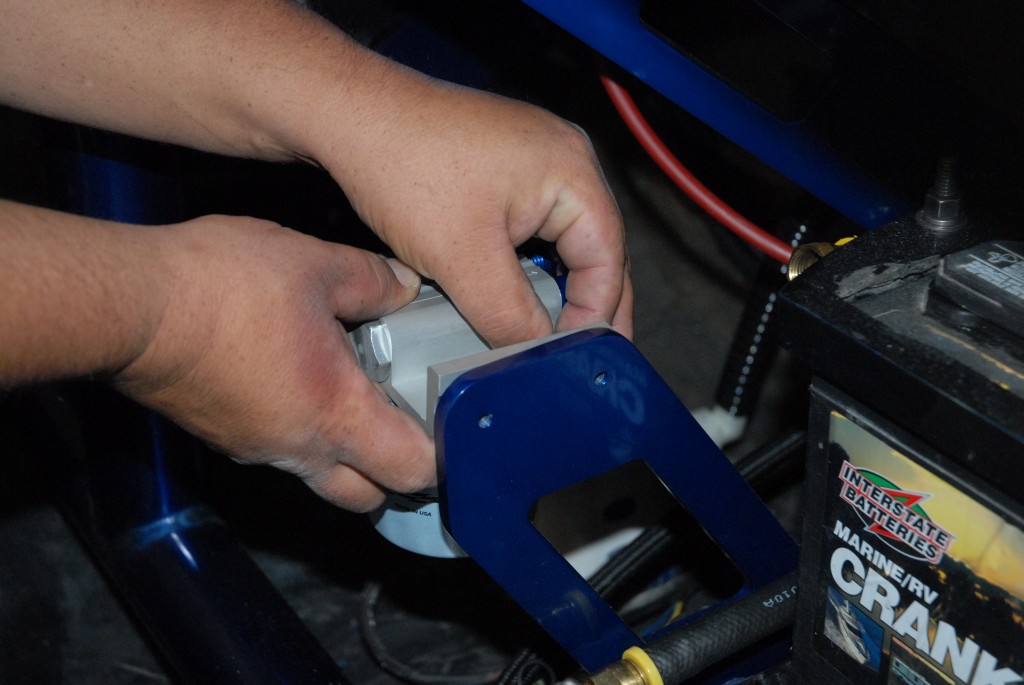 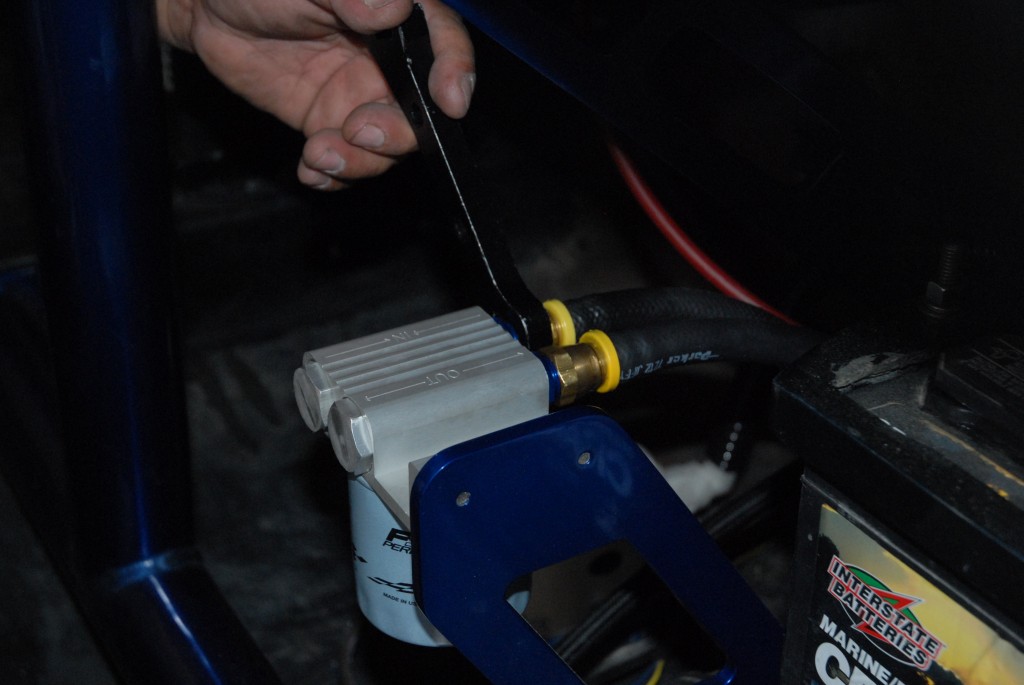 Take the fuel lines and re-attach to the correct ports. If it’s difficult to see which line is for the tank and which is for the fuel pump, mark them accordingly before you disconnect them from the old filter. 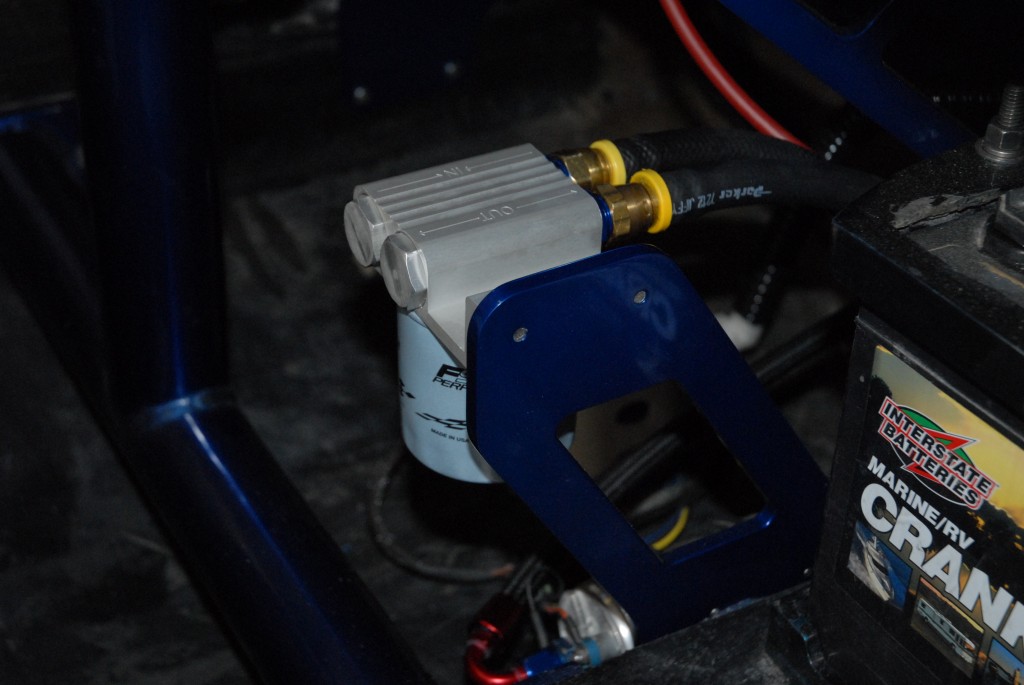 Once the fuel lines are securely attached, check to make sure there are no kinks or obstructions to the lines. 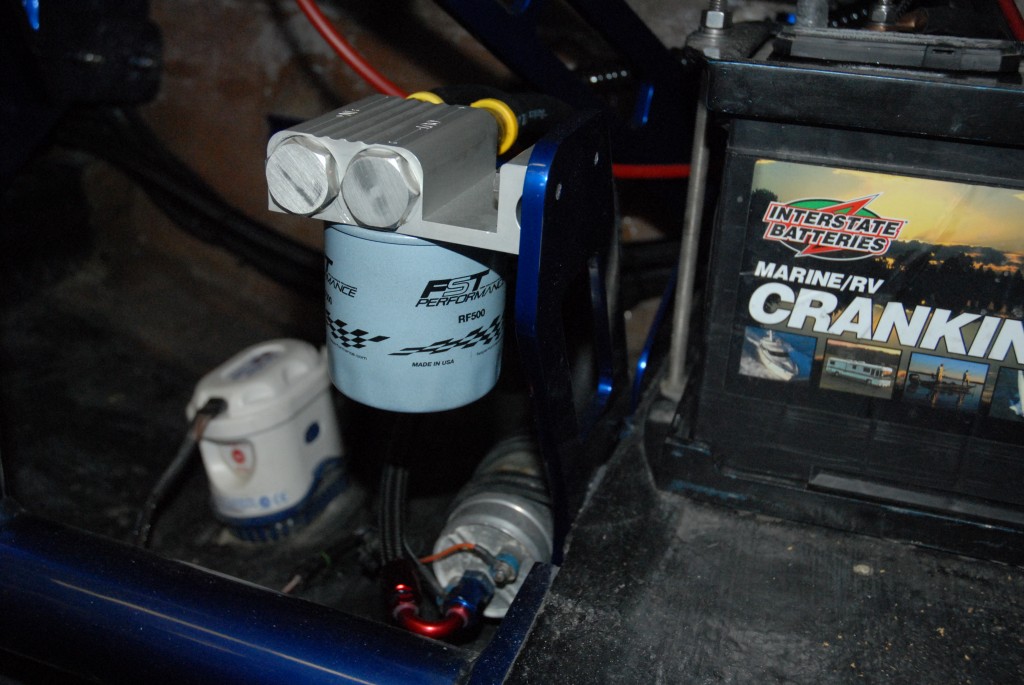 Now the fuel filter switch is complete. Make one final inspection, however, before heading to the water. Try priming the fuel system and start the engine with a flushing attachment. With the engine running at idle, carefully inspect the fuel lines, fittings and canister for potential leaks. If you notice any sign of fuel on the canister or around the fittings, immediately shut-off the engine and re-check your work. 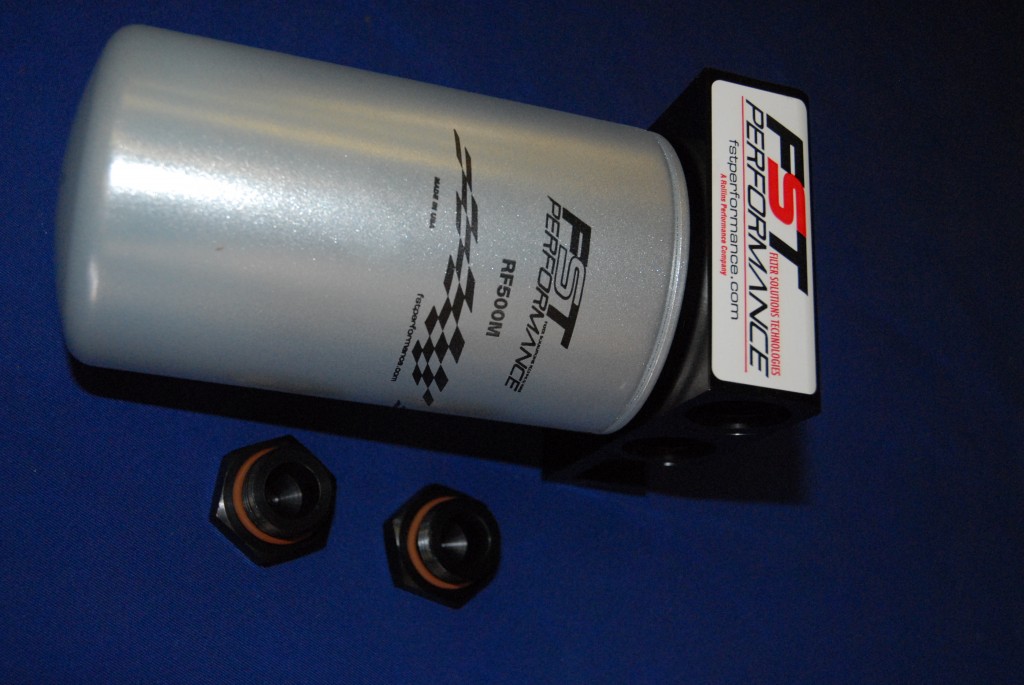 If you have a high performance engine (over 500 HP), you should consider the FST Performance RPM 500 model which features a larger canister (over twice the size of the RPM 350 model) and an even finer 3 micron filtering internal media.
Reactions: HPBoats83