The gentleman behind the mega MAGA marine movement is Carlos Gavidia but try hollering out "Captain Trump" if you really want to grab his attention. From surviving the China virus to single-handedly reviving America's passionate patriotism through powerboating; the unexpected string of events evolving around him in 2020 has shifted from life-threatening to MAGAnificient. 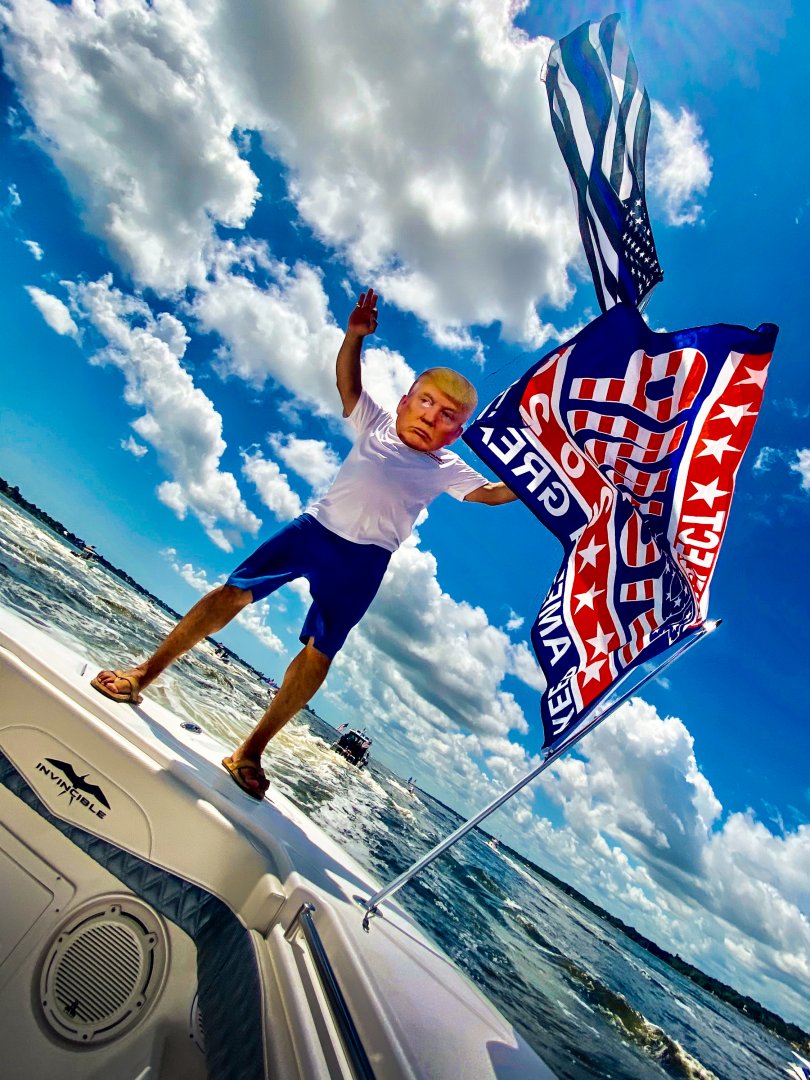 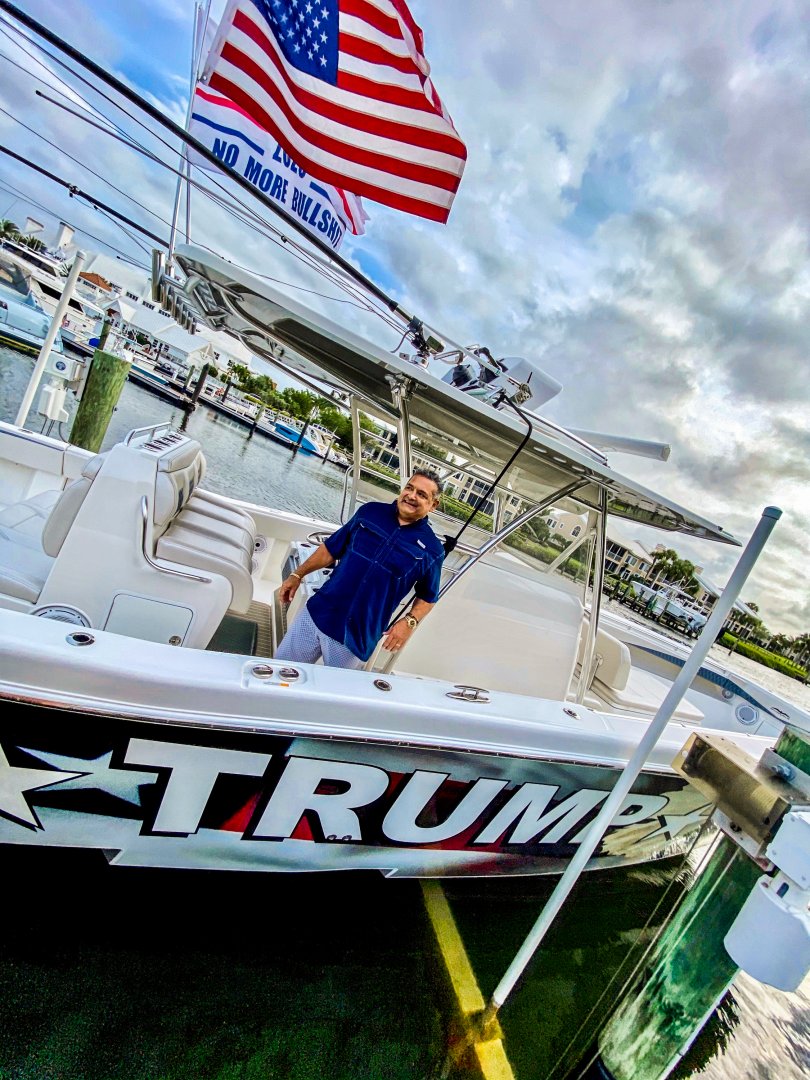 In early March, shortly after sipping apres-ski aperitifs at the woodsy-chic Aspen oasis The Little Nell with his children and wife Laura, life for Carlos would head downhill. At that point, the 53-year-old Floridian had no idea the Australians sitting a few tables away were infected with the coronavirus, or that the wonder drug Hydroxychloroquine would soon save his life.

Fearing the doom and gloom predictions about the mysterious Wuhan virus spreading faster than plummeting snowflakes in a whiteout; the week in winter wonderland was cut short and the Gavidias jetted home to Jupiter (just north of Palm Beach). And then, the shocker... Carlos saw the Aussies from his same hotel on a news broadcast. Flashing headlines revealed the group from Down Under tested positive for the virus; all four family members would receive the same results.

Upon touchdown from Colorado late Friday night, Laura already had a fever and Carlos would be next. Laura was fortunate to recover after five days, and the children Casen and Liana never developed serious symptoms. Carlos on the other hand, continued to deteriorate and was admitted to the hospital, coincidentally that same week President Trump made mention of Hydroxychloroquine as a possible cure. Bafflingly enough, because Carlos wasn't on a ventilator the doctor couldn't prescribe it, but suggested his family try to find it. Miraculously, Laura's grandmother in Georgia who suffers from lupus had a 90-day supply. Carlos no sooner bailed from the hellacious COVID-19 ward, and a private plane high-tailed it to grandma's house. In less than 36 hours, he was on his way to recovery. 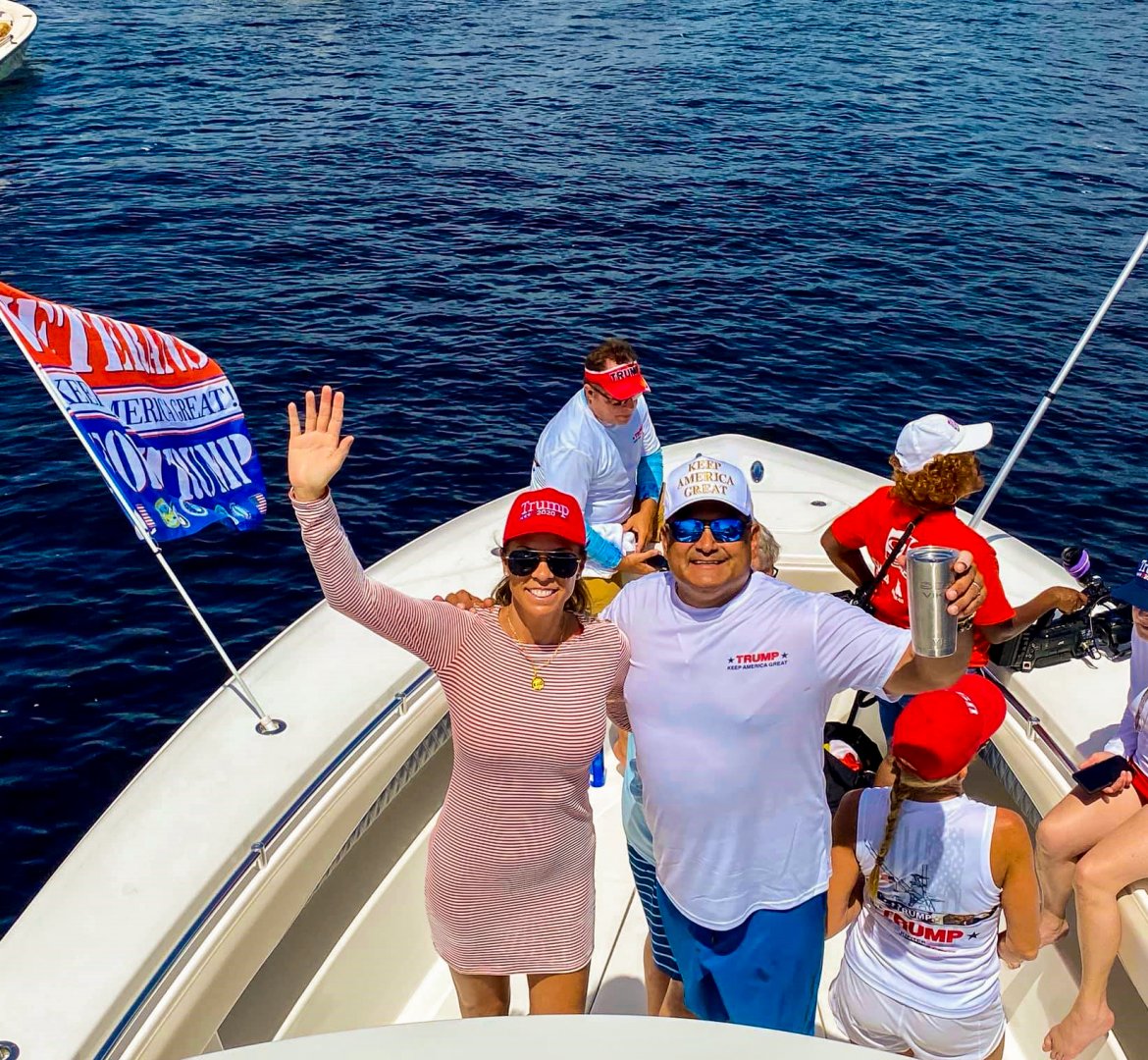 Did President Trump save his and countless others' lives by suggesting the drug might combat the coronavirus? Yes. And for this, Carlos is grateful... and his gratitude might just be the final push to get No.45 re-elected. Not over a miracle medication, but from the Trump boat parades he

started skyrocketing to stardom and earning him the title – Captain TRUMP.

On Becoming Captain TRUMP​
As April approached and the corona catastrophe was put to rest, the life-long aficionado of the seas was anxious to climb back into the pilot's seat of his triple 350-hp Yamaha powered Invincible docked behind his house... and pin the throttles forward! 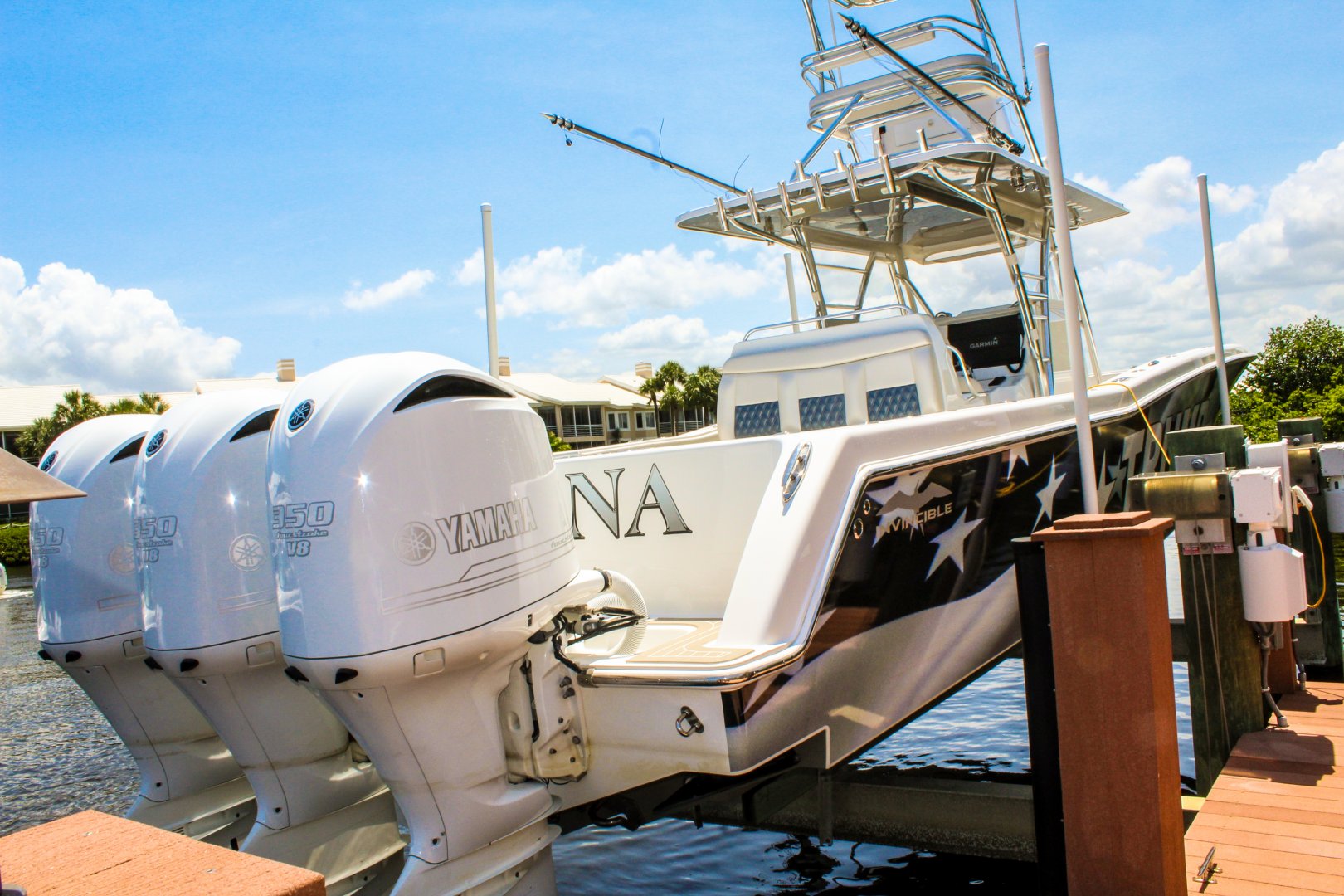 When opening day making wakes finally arrived it proved to be an exhausting one, and when Carlos returned home he innocently forgot to remove his Trump banner. Given that gated residential communities are as notorious for dictating rules and regulations as all-girl Catholic prep schools are; the "flag-flying" complaints from liberal leaning, cancel culture neighbors started rolling in. On day three, he obliged the HMO and the banner was lowered.

But on day three, there would be another box to check off his to-do list. Carlos was officially registering the boat name with the United States Coast Guard, and the best was yet to come. Trust the plan! To piss off the snitch brigade, he dropped seven grand wrapping the solid white hull with freedom-fighting bald eagles at the bow, and the newly documented legal name in bold block-lettering on each side. Did I mention the official name is TRUMP? It's great to have the last laugh!

After Nathan Smith of Wrappit Wraps worked his magic, Carlos, the cheery and charming chap that he is, spontaneously organized what he imagined to be a "little" patriotic procession via Facebook to show off the head-turning graphics, and uhm... give the offended-by-everything, loathsome Karen-types an eyeful to bark about.

The event on May 3 went viral, drawing thousands of boaters. Nevertheless, it was the recognition from one non-boater that made the occasion all the more memorable. President Trump took notice, tweeting “Thank you very much to our beautiful boaters. I will never let you down.", and then proceeded to directly thank Carlos. 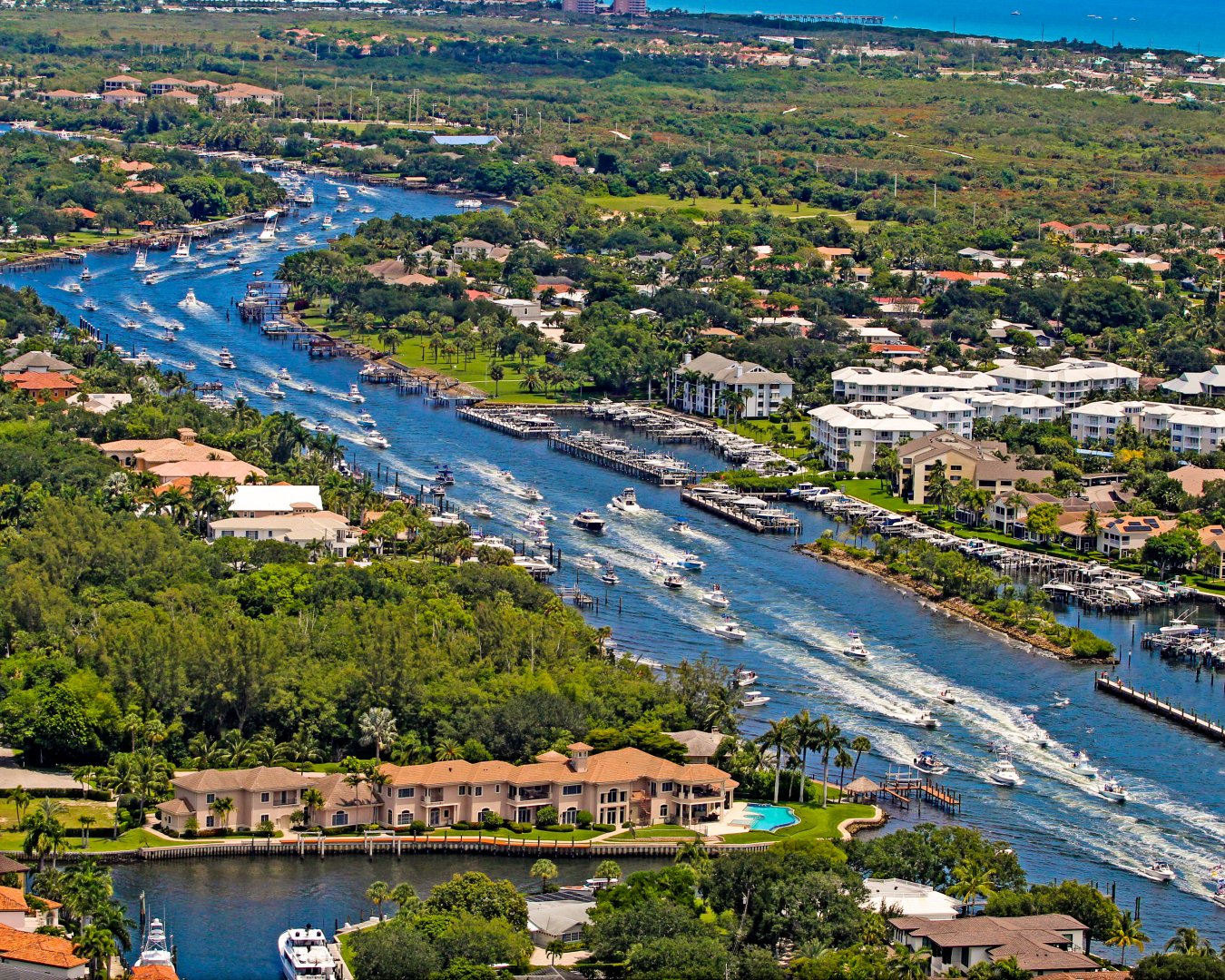 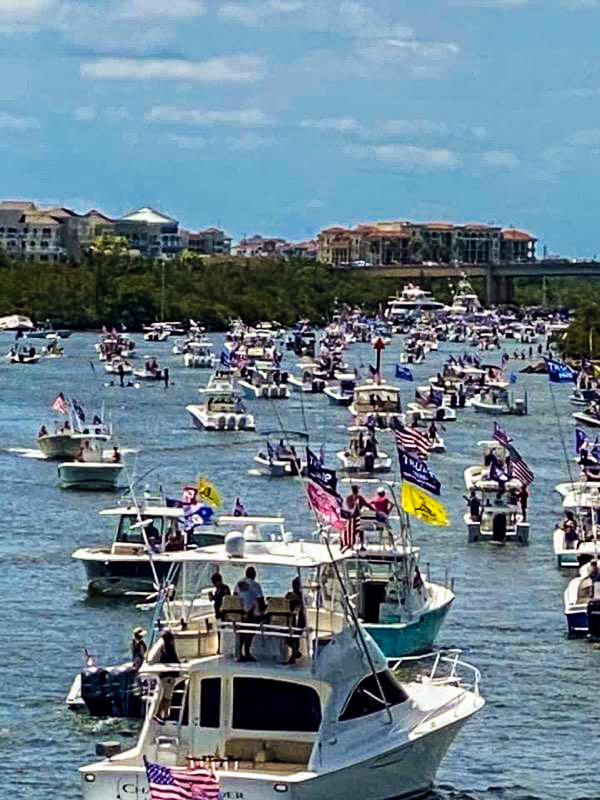 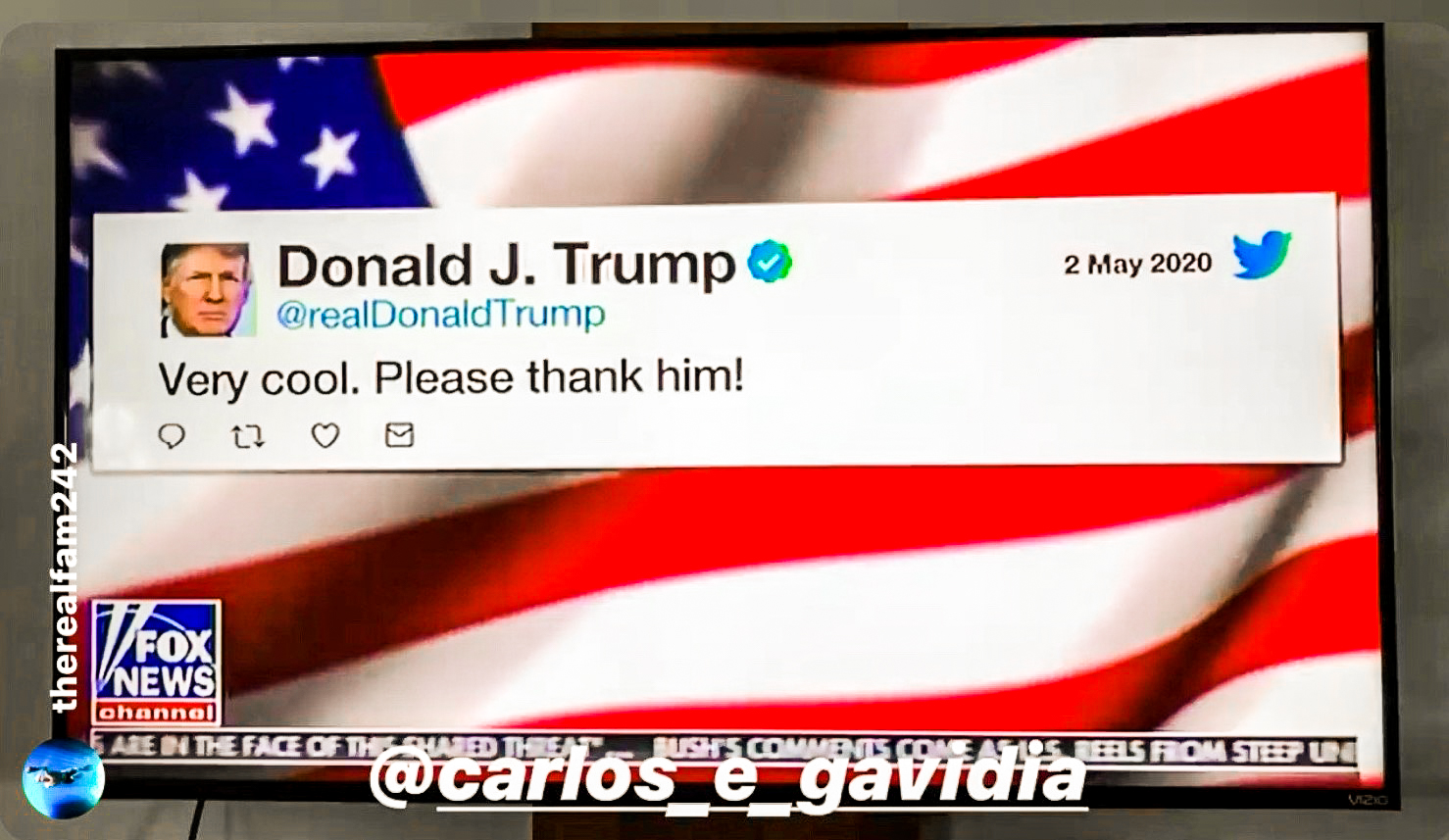 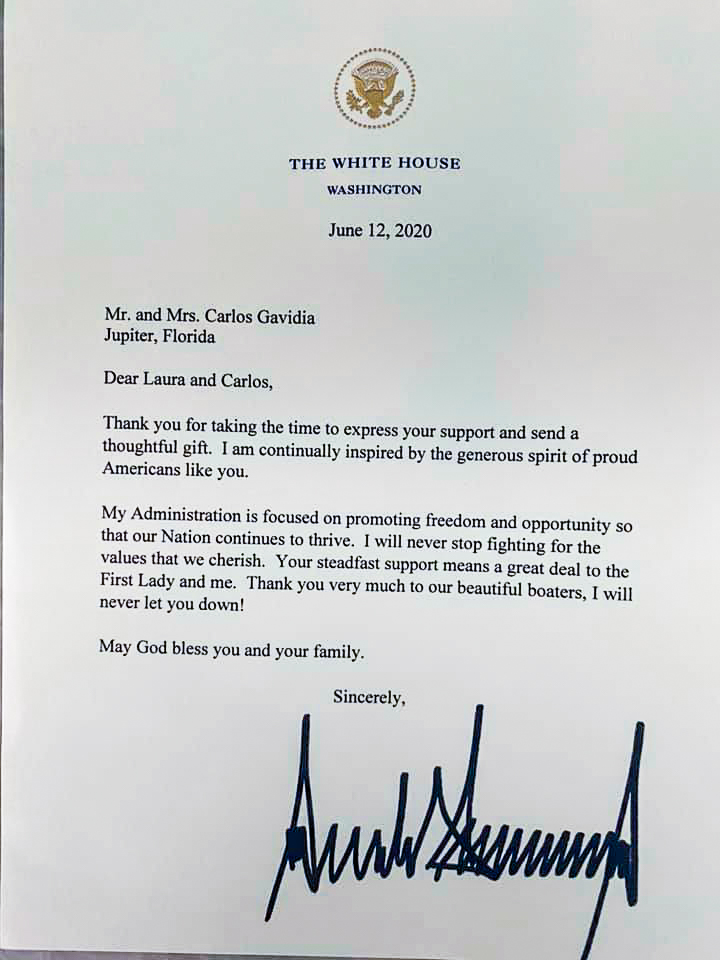 And so it all began – the Trumptilla phenomenon was born. Carlos turned the tides from blue to red and the "new-style" Trump rallies were about to get a little wet. Within a week Florida was blanketed with boatercades, next up the Sun Belt and the Great Lakes scheduled theirs, and by Memorial Day Weekend as many RDPers know or were there in person with Rive Dave and his family; Lake Havasu packed the Bridgewater Channel celebrating with its Arizona armada. 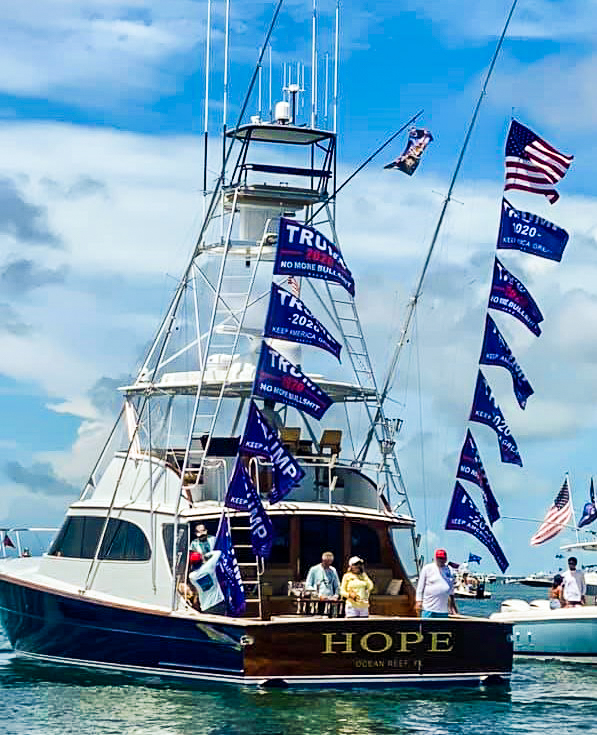 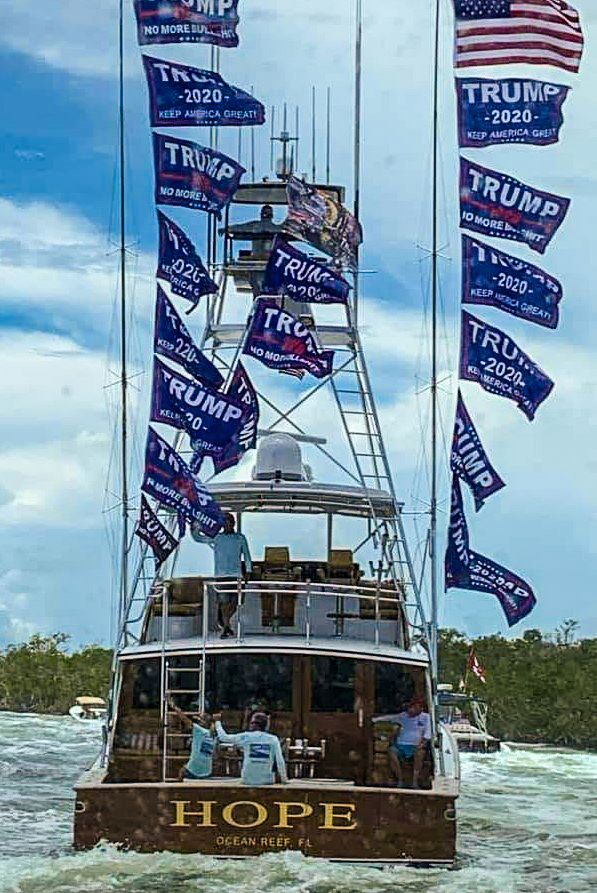 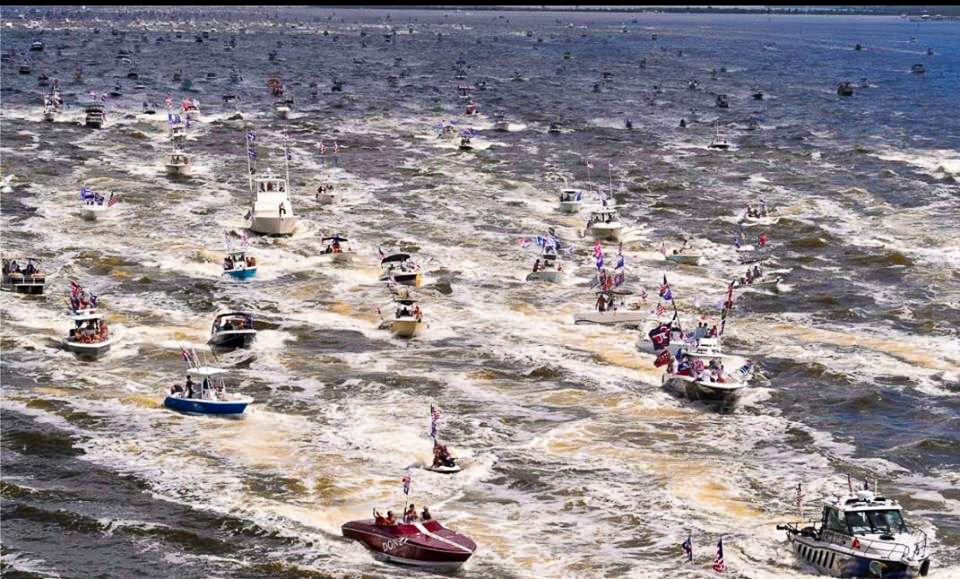 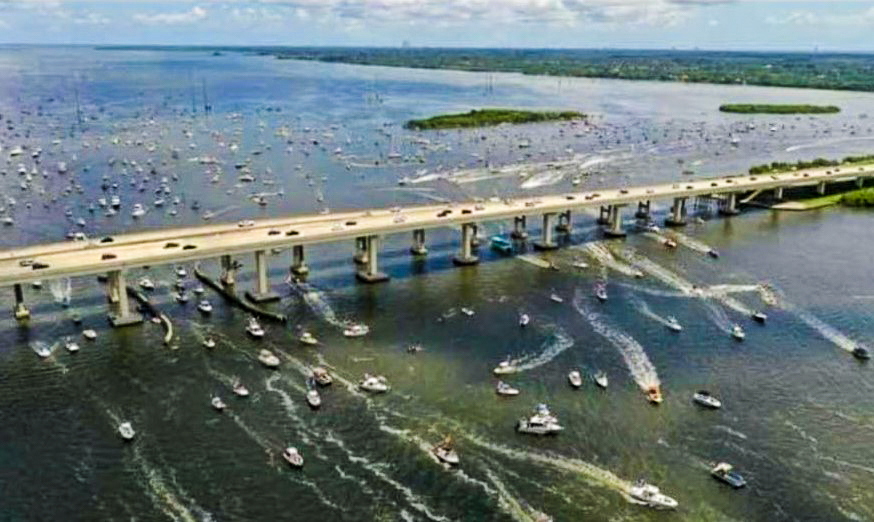 To witness the explosion of pop-up pageants build momentum across the nation has been nothing short of biblical, although to truly appreciate the magic and magnitude, it helps to understand this man's fighting spirit which mirrors that of our president. Carlos was only three when his family arrived to the United States from Lima, Peru. No stranger to the word "work" and the pursuit of the American dream, as a child he became a street vendor pushing ice-cream carts, hot dog wagons and hawking T-shirts and fireworks at the family's five stands around Washington D.C. And in the year 1978 he became something else – a United States citizen, when the family's naturalization process was finally approved.

With a knack for sales, entering the residual health insurance business by accepting a position with National Association for the Self-Employed (NASE) after college seemed only natural. Carlos found his calling and at age 23 ranked No.2 in the country out of 4,400 sales professionals. Plunging commissions dismantled the once profitable industry and in 1995 he ventured into residual credit card sales opening Direct Connect LLC; two decades later the majority was sold to Goldman Sachs. The Peruvian-born, self-made American entrepreneur retired in 2014 proving "the world is yours" if you want it.

With the succession of speedsters Carlos has to his credit – it would appear the recent retiree reached the top of both the professional and powerboat ladder. But with the boats, what's mind-boggling is the mysterious foreshadowing of uncanny occurrences with their names. While chatting with Carlos and Laura one Sunday afternoon this past May when they cordially welcomed me to their home for an interview, Laura suggested including a bit of the background after witnessing all that's transpired with the recent naming of the TRUMP boat, and the euphoric effect the parades are having on our great nation. 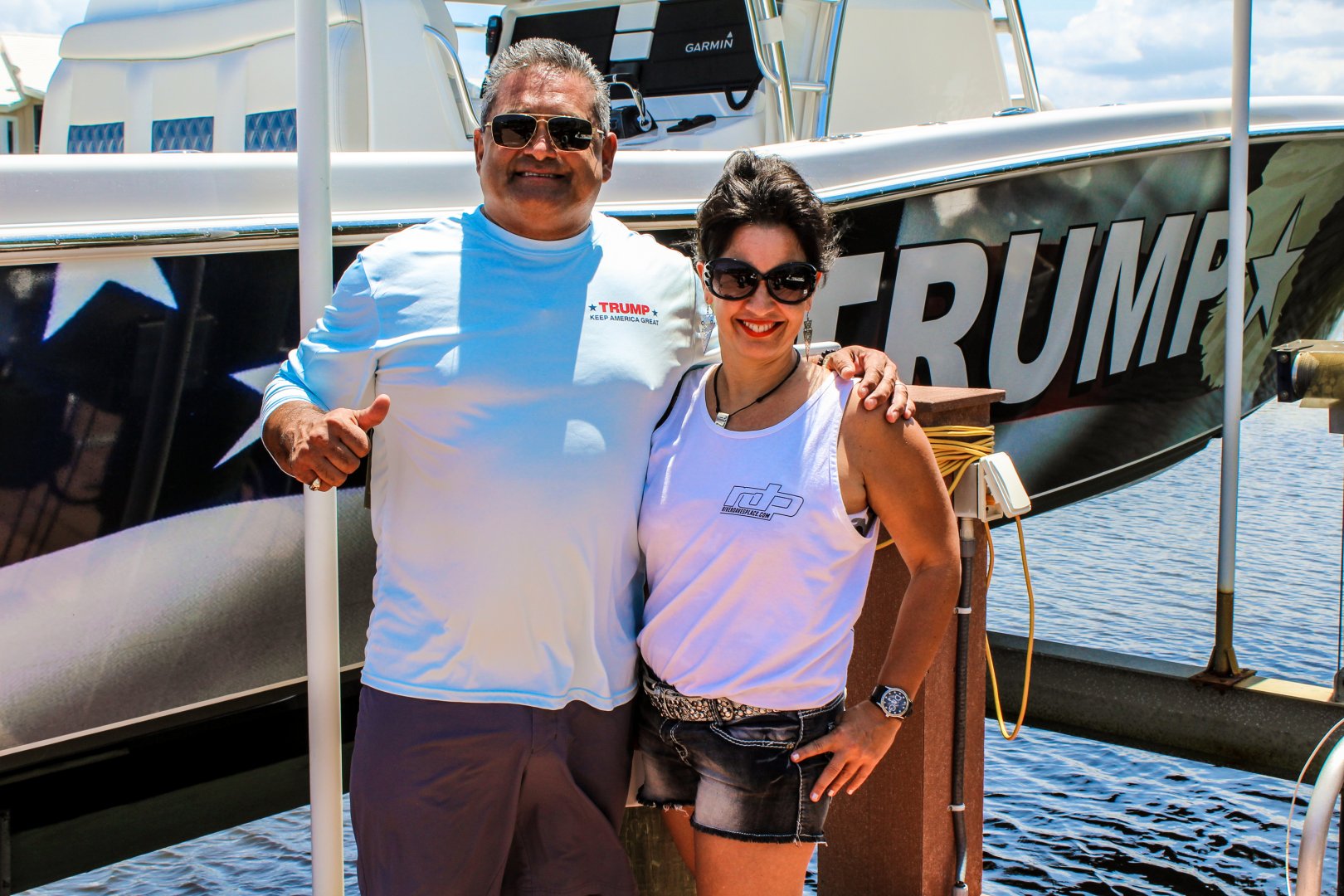 "Be Careful What You Name It!" (qtd. L.Gavidia)​
Trading a trumpet with his neighbor in exchange for an electric-powered aluminum row boat put 12-year-old Carlito in his first 12-footer that he'd take out crabbing on the Chesapeake Bay. Upping his game by 14 inches, the 26' Nova Spyder he hopped into next was even the chosen "motorized location" for his first date with Laura, then after exchanging I-Do's, the duo opted for a Scarab Thunder called Double Trouble.

While vacationing down in the Bahamas with the 31-footer, Mother Nature's nasty mood swing put the couple in tumultuous danger when a savage storm rolled in dumping 10-footers over the bow taking out the windshield, bilge and bolsters. Distressed Maydays were answered by Brian Turnquest, Captain of Bahamas Air Sea Rescue Association. Despite the fact that Double Trouble was DOA following the rescue mission, Turnquest would meet the future godfather of his children that afternoon, and a long endearing friendship has since flourished

Done with Double Trouble, six months later a 46' Black Thunder patriotically painted in honor of 9/11 came out of production with triple 330-hp Yanmar diesels. Dubbed Fearless, it was a looker on the outside but lacked the needed naptime space on the inside for Casen and Liana who were now toddlers. Life is good when growing children are the reason to upgrade to Sunseeker Superhawk. Nevertheless, enjoying time aboard the Superhawk baptized under the name Survivor would be short-lived. Very short-lived. The 52-footer was stolen out of its Lauderdale marina slip by three guys in less than three minutes, and discovered months later behind a ripped-off 18-wheeler flatbed. Renamed Gladiator, the boat bandits kept busy shuffling square groupers, ganja and guests around the Caribbean on it. 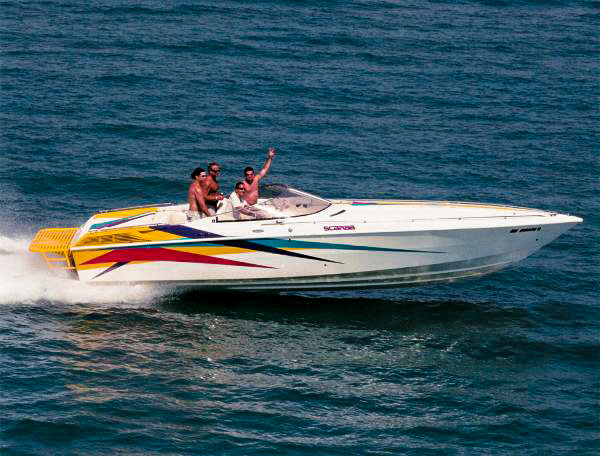 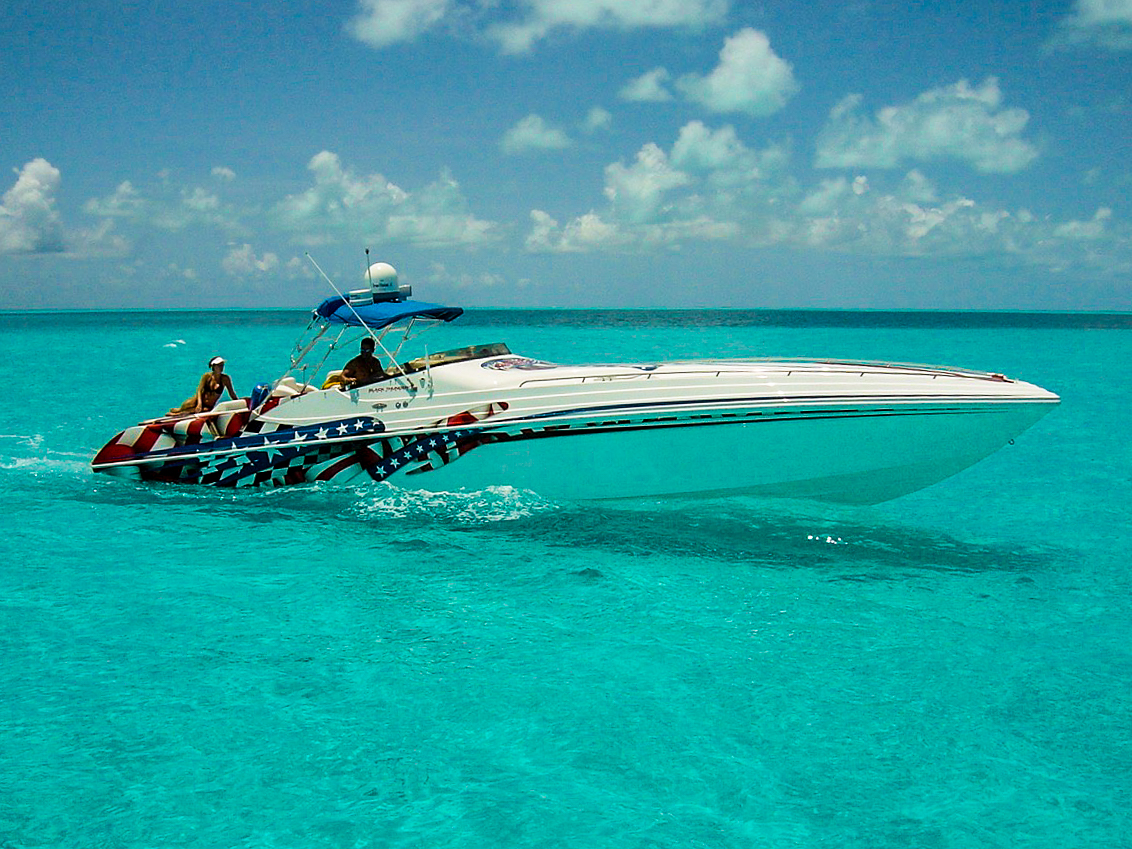 Laying out $700,000 dollars for marine repairs after the robbery would only be the start. On its maiden re-voyage while piloted by Carlos' business partner, a very close encounter with a coral reef put the problem-prone Survivor back out on "medical leave" for further treatment including a new engine. Half a year later, to celebrate the maiden re-re-voyage, two massive holes gouged the side out after bombarding into a 14' buoy on the Potomac River. Game over! The outcome: Make way for the center consoles. 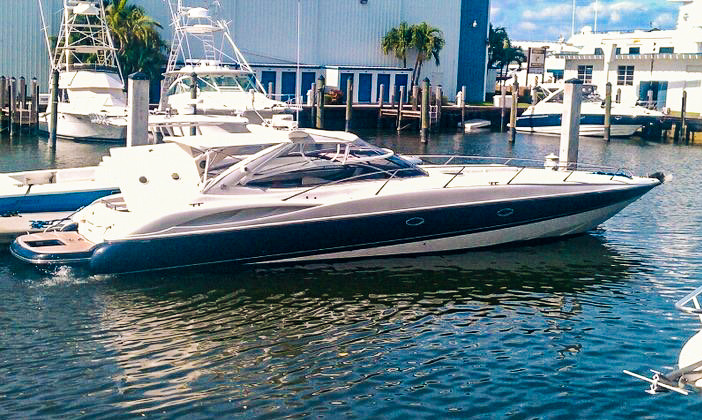 A 32' SeaVee with twin 250s would enter the picture, that is, until an Invincible test ride spotlighting its efficient, dry, fast and fun features sealed the deal for a 42-footer. At the same time, a quad-powered Bahama was added to his well-diversified sea machine stable before Carlos eventually liquidated them and switched to an updated 2017 model Invincible. Over the last few years the Invincible served several purposes including being used as the tender to a 70’ Viking he welcomed to the family after selling Direct Connect LLC. 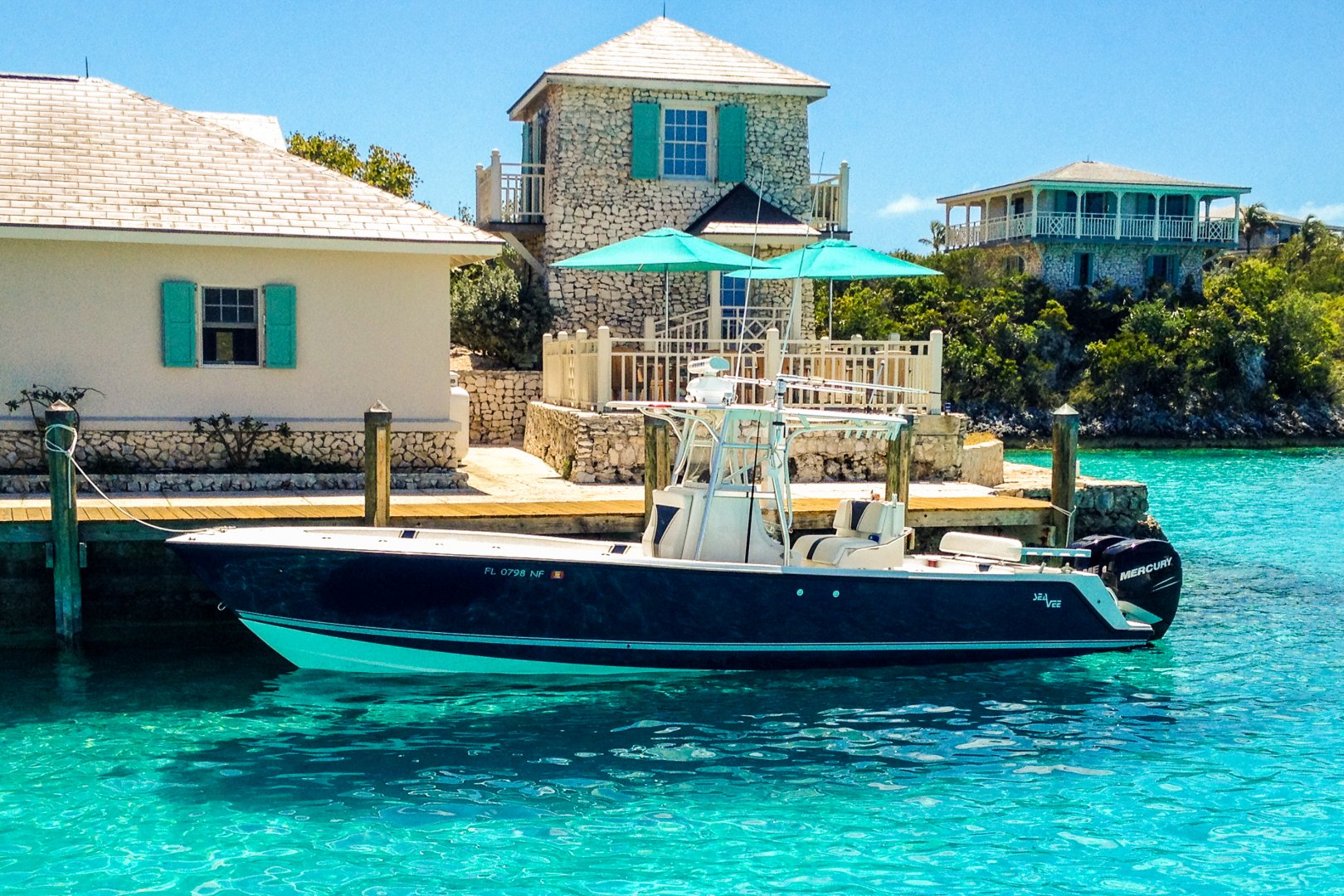 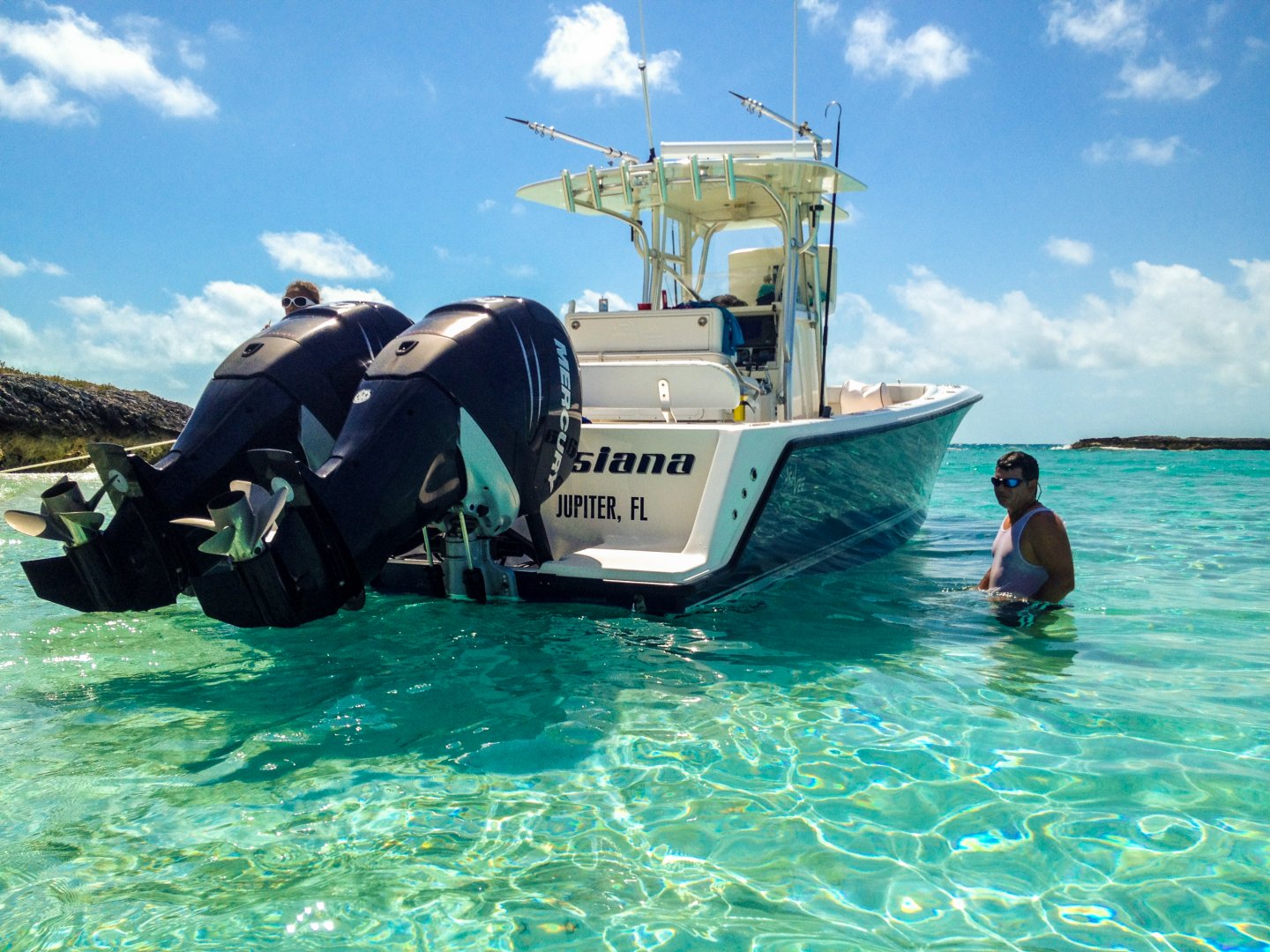 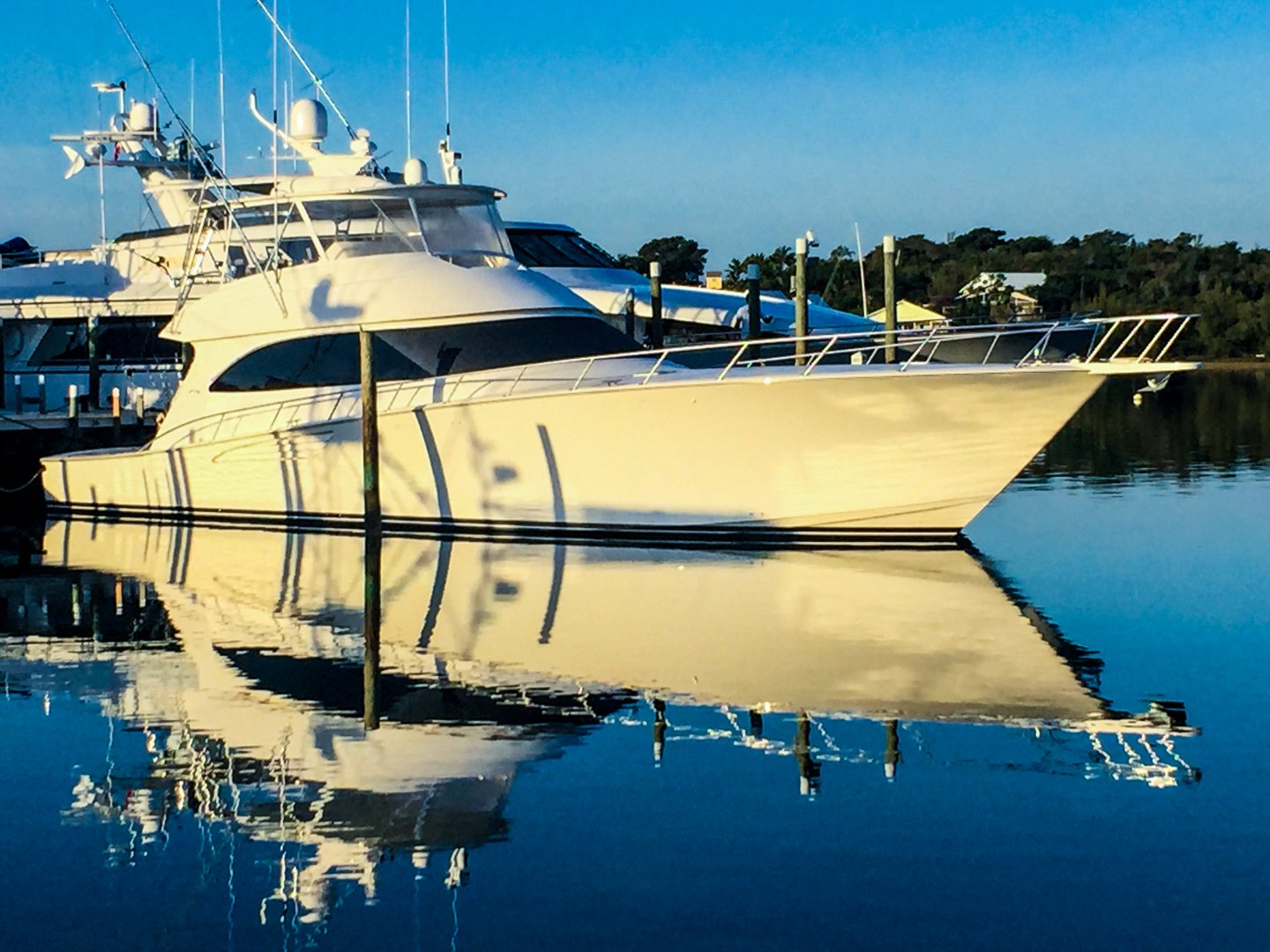 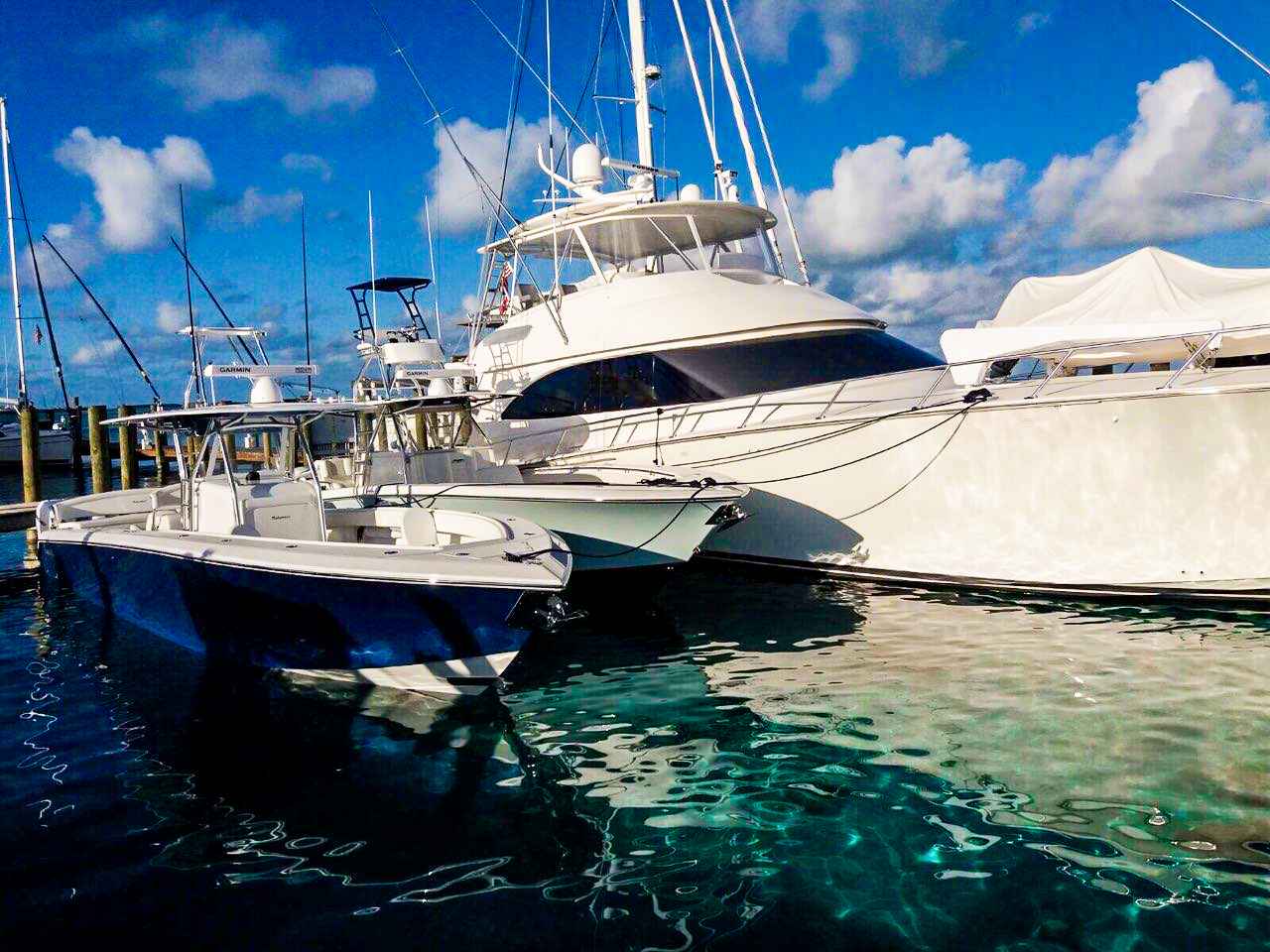 Sisu, as the Viking was named, is Finnish for a fighting warrior – a man with a plan who follows through with action. And after our two-hour tête-à-tête, Carlos is clearly the Peruvian American version of a Sisu warrior, who many times could have thrown in the towel with his business and given up, but in the end stayed the course. Since Sisu was recently sold, it's only befitting that Carlos continues his crusade now captaining the indestructible Invincible named TRUMP, which stands for or characterizes an individual who conquers, crushes, defeats, prevails, triumphs, and in the end wins! 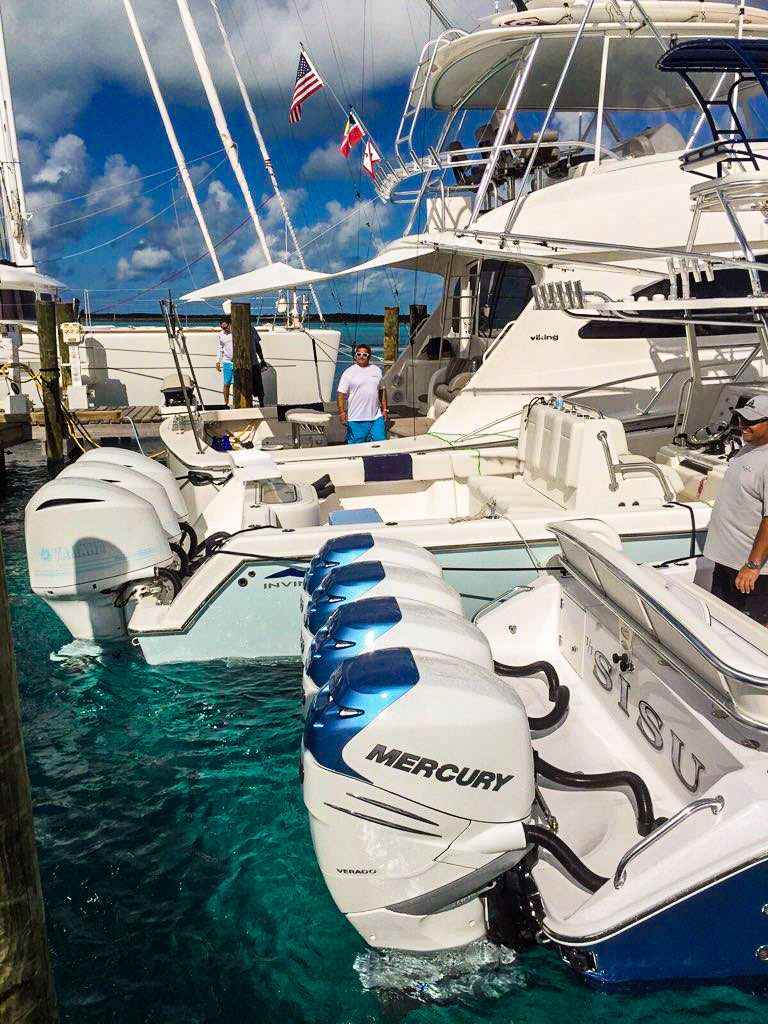 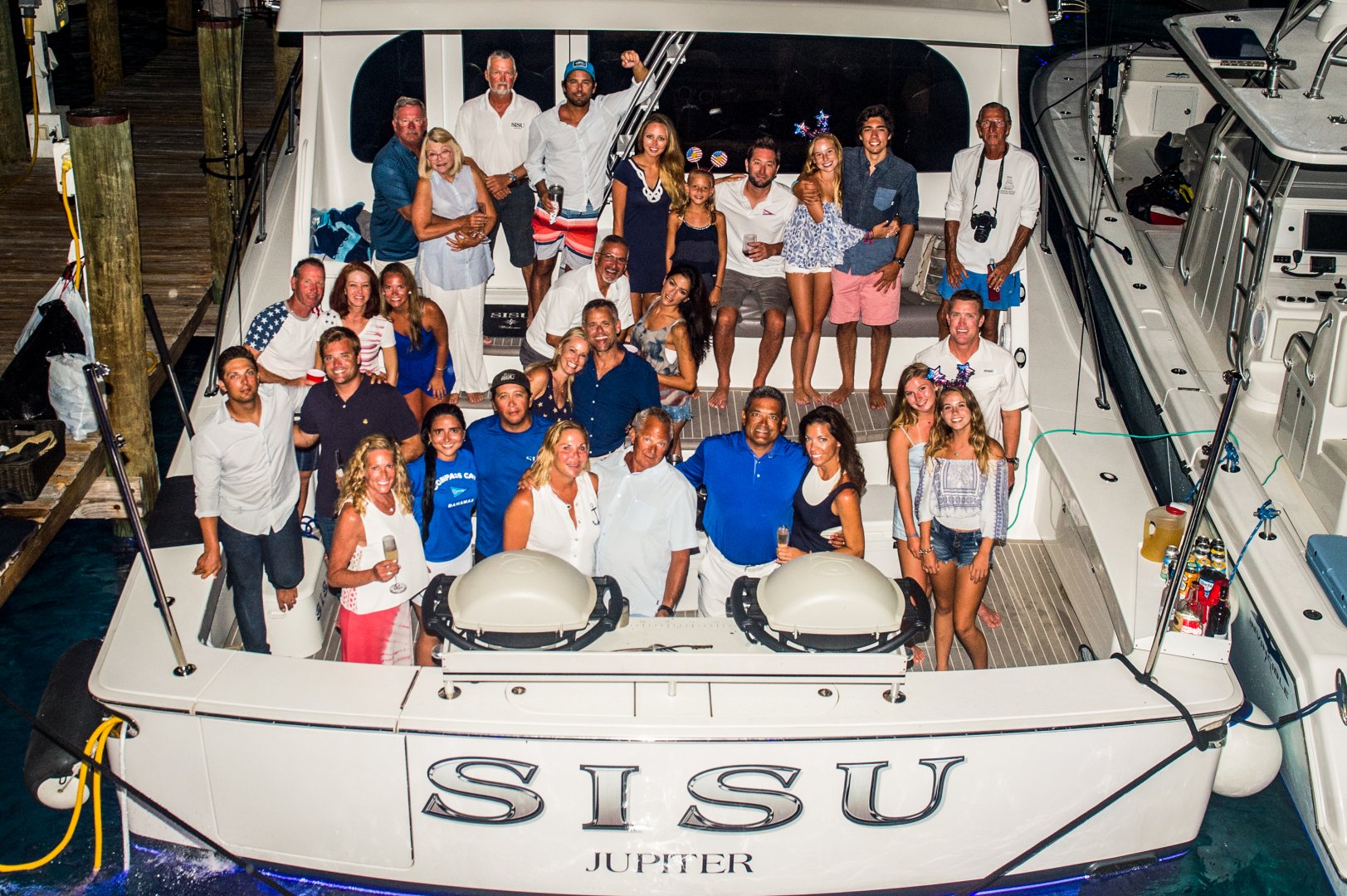 Part Two will follow on Trump's birthday weekend spectacle from the Palm Beach waterways, as well as, RDP's behind the scenes pix from the filming of a special music video just released featuring the TRUMP center console! 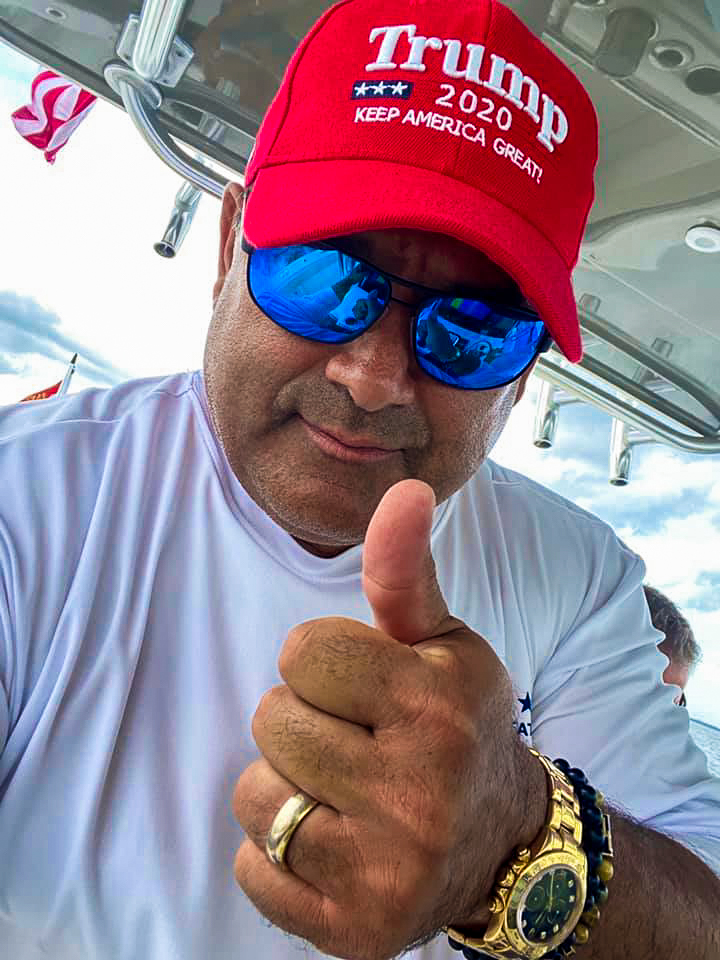 Nothing sucks more than a political stooge
Awesome story,God bless the U.S.A.
You must log in or register to reply here.