The Road To Nashville With Mercury Racing 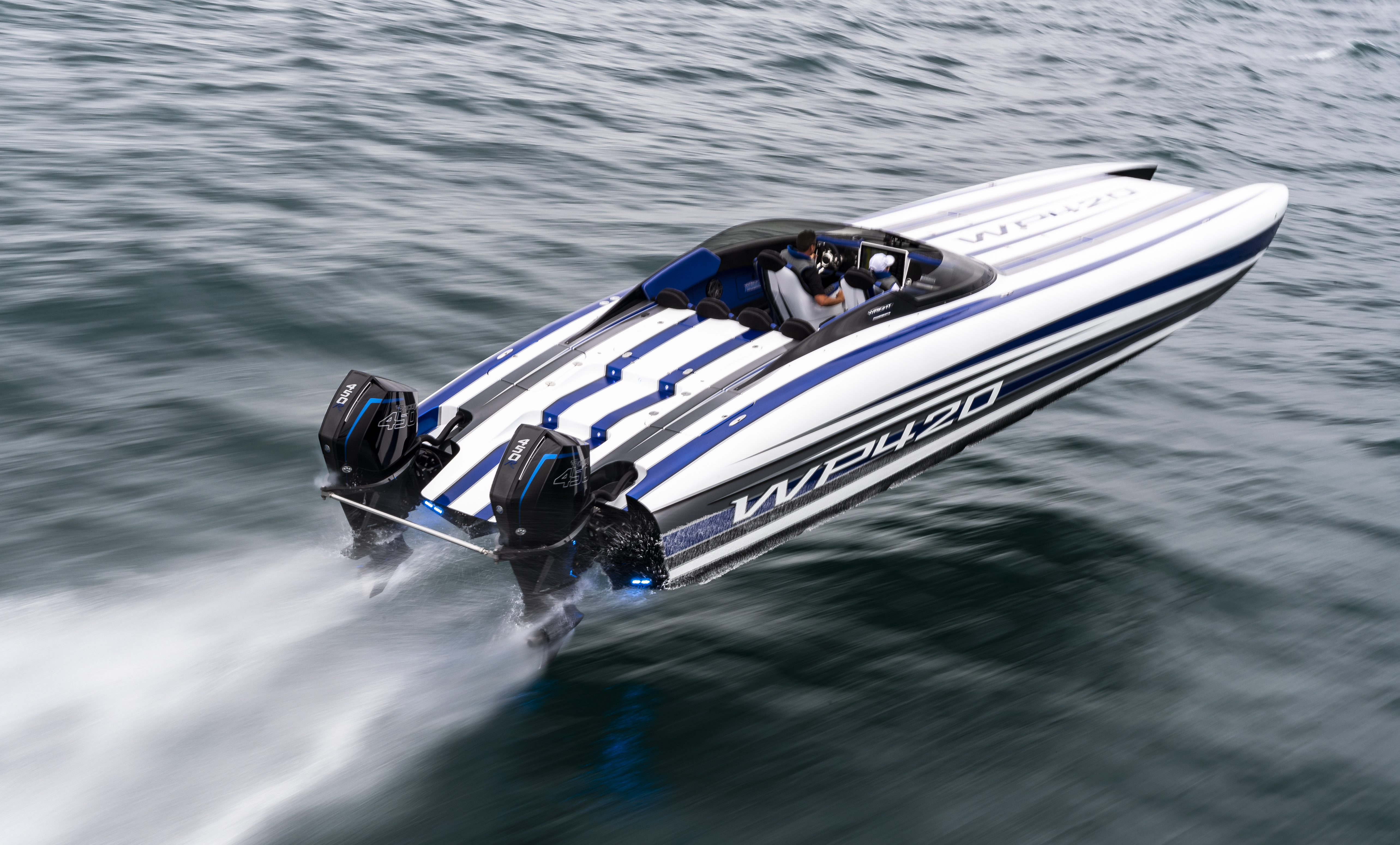 The performance-boating industry generally consists of companies founded on a distinct passion for going fast on the water. Regardless of the size of the company, nearly all players in todays performance segment can trace their roots back to a simple love for the water and of course, the exhilaration of speed.
While many wildly successful companies exist in this market, it isn’t a hotbed for huge manufacturers and aftermarket suppliers like those in the auto industry.
Boating in general and performance boating in particular is a much more grassroots business environment. Having said that, however, this segment is not without big players that can create an industry standard with the introduction of a single product. One such manufacturer is Mercury Racing. I recently had a front-row seat when just such an introduction took place.

What started in the 1970s as a channel for Mercury Marine to showcase its new products and innovations has grown into Mercury Racing, now recognized worldwide for setting the bar for high-performance marine propulsion systems. From the early two-stroke high-output outboards to its status-quo-shattering QC4V line of inboard engines and the revolutionary Verado 400R outboard, Mercury Racing is the clear leader in the performance marine-engine market. So when an email from Mercury Racing flashed on my screen last January it grabbed my full and immediate attention.

Andrea Jansen, brand manager at Mercury Racing, said they needed quality photos for the introduction of its new V8 300R outboard at the 2019 Miami International Boat Show in February. I immediately responded that I was onboard, and a date was set to shoot two beautiful Nordics powered by Racing 300R outboards, in addition to DCB’s exciting new M44 widebody known as “Bananas XL.”

Mercury Racing leaves nothing to chance. Their art department knows exactly what they need in way of look, feel, and composition of the images they are requesting. Production meetings bring everyone up to speed on logistics, timing, and execution for all involved including boat captains, helicopter assets, photographers, art directors, and assisting staff. As the timeline of the shoot ticks away each shot is checked and rechecked before moving on to the next shot on the list. As a photographer this whole process has a very settling effect. At the end of the day you know without a doubt that you got the shot you set out to get.

The technical aspects of the shoot were intricately planned, but, as every boater knows, you can’t control the weather. When it came time to shoot, the predicted mild temps and perfect conditions were replaced by one of the coldest, windiest days of the year. Undaunted, we soldiered on and produced some truly exciting images that would grace the pages of Mercury Racing’s new product brochure.

As soon as the 300R shoot was concluded, talk of another – bigger – shoot began. This time, however, early details were few and far between, and non-disclosure agreements were mandatory. Mercury Racing’s newest baby would be a cornerstone product – and more. Without knowing what the shoot would entail, I jumped at the opportunity. I knew this was going to be something special.

The alarm pierced the early morning silence on Sunday, May 12th at my home in Lake Havasu. In just a few short hours myself and my assistant Carter Bahde would board a plane bound for Orlando, Florida. The stage was set to shoot Mercury Racing’s most exciting new product since its revolutionary Verado 400R in 2015. The plan was to capture shots of the top-secret product just off the “Space Coast” of Florida near Melbourne – away from prying eyes and under Florida’s predictably sunny skies.

Did I say sunny skies? Once again nature served up a sucker punch in the way of grey skies and rain… lots and lots of rain. As Mike Tyson once said “Everyone has a plan till they get punched in the mouth.” Day One was indeed a punch in the mouth, and not a single photo was taken due to weather.

Day Two, however, proved productive, as fair skies and intermittent sunshine allowed us to check off many of the needed shots on our list.
When shooting for Mercury Racing the end product is paramount to everything so bringing in assets like photo boats and helicopters is everyday business. For this job, Mercury Racing also called in the veteran film and photo crew of the Mike Fuller Group. Mike Fuller and his brother Brad Fuller have been shooting the marine industry for over 30 years and have the tools and experience to raise production value to the next level.
Their job on this day was to shoot primary video assets and handle production logistics, while I captured still photos, and my assistant, Carter Bahde collected key drone footage.
Traditionally, accumulating such important and exciting imagery can test the mettle of any photographer. Some say you haven’t lived until you’ve shot photos hanging off a boat at 100 mph. Mercury Racing and the Fuller team were all business and no risk, and Day Two was a winner.

Day Three was reserved for our helicopter shoot, and the weather was once again fighting us. On water that Tommy Mason from Nor-tech Boats later described as “sporty,” we set out on the Atlantic coast. The seas were big enough to turn our photo shoot into a bit of an air show with the 45-foot
Nor-Tech center console and the 42-foot Wright Performance competing for top honors in the big-air category. Seeing a 45-foot center console take flight and repeatedly seeing daylight under
the props of the new Mercury Racing engines were something to behold. When you get shots of
subject boats so far out of the water that they can’t be used for publication you’re running in some very “sporty” conditions indeed.

We had to work for every shot, but the assignment was accomplished in spectacular fashion, and the images were included in a multitude of promotional materials.

Fast forward to June 17th and once again my slumber is interrupted by the shrill call of my alarm. Another flight to be caught and another memorable experience to be had at the behest of Mercury Racing.
For our next adventure Mercury would be having us along for the opportunity to document the final chapter of their newest offering. This time the cat would finally be let out of the bag. After so much anticipation by the performance boating industry and the excitement and hard work of those at Mercury Racing, the big day was upon us.

With a high-profile collection of boat manufacturers, their customers and the media on hand, Mercury Racing introduced its next star in a long line of powerful, high-performance game-changers – the all-new Mercury Racing Supercharged V8 450R outboard engine.
The reveal was a hit and those in attendance were treated to a level of professionalism that just isn’t seen often in today’s web-centric marketplace.
With so many companies today taking the virtual route when bringing new products to market, Mercury Racing took the industry back to the days of a tangible, visceral product experience. And they didn’t stop at the reveal either – the next day featured boat tests for boat builders and the media on the Cumberland River. There is simply no better way to experience the world of high-performance boating than to plant yourself in a seat and feel it for yourself. It was, in Mercury Racing terms, “Wide Open.”

For my small part in this project there was nothing more exciting than seeing our hard work come to life on the big screen and in the printed materials distributed throughout the event in Nashville. I was more than thrilled to finally be able to share some of my imagery with the world. When I first began my journey to becoming a professional marine photographer, Mercury Racing was at the top of my list of dream companies to work with. Not only did that dream come to fruition this year, but I gained a true appreciation for the people at Racing who’s blood sweat and tears are poured into all of their amazing products. In a world of bottom lines and manufacturing farmed out to the lowest bidder overseas, it's refreshing to see a company staying true to their roots and manufacturing the best products in the industry right here in the USA by people who are truly passionate about performance boating.

So, cheers to Mercury Racing. I for one can’t wait to see what they bring us next!


See you on the water!