The Storm is Here - Tsunami of Red, White and Blue Hits NY and Beyond

Article Gallery
The Storm is Here
Tsunami of Red, White and Blue Hits NY and Beyond

"Red spirited" New Yorkers had the right idea by ditching their Midtown-turned-ghost-town workplaces and swapping their Zoom meeting Adidas jogging suits for Billabong bathing suits on August 7 for round two of TrumpStock – New York's take on the Trumptilla wave of wickedness rocketing the nation in honor of our Savage Savior, organized by U.S. patriots and professional business partners, Andrew Novak and David Garren. 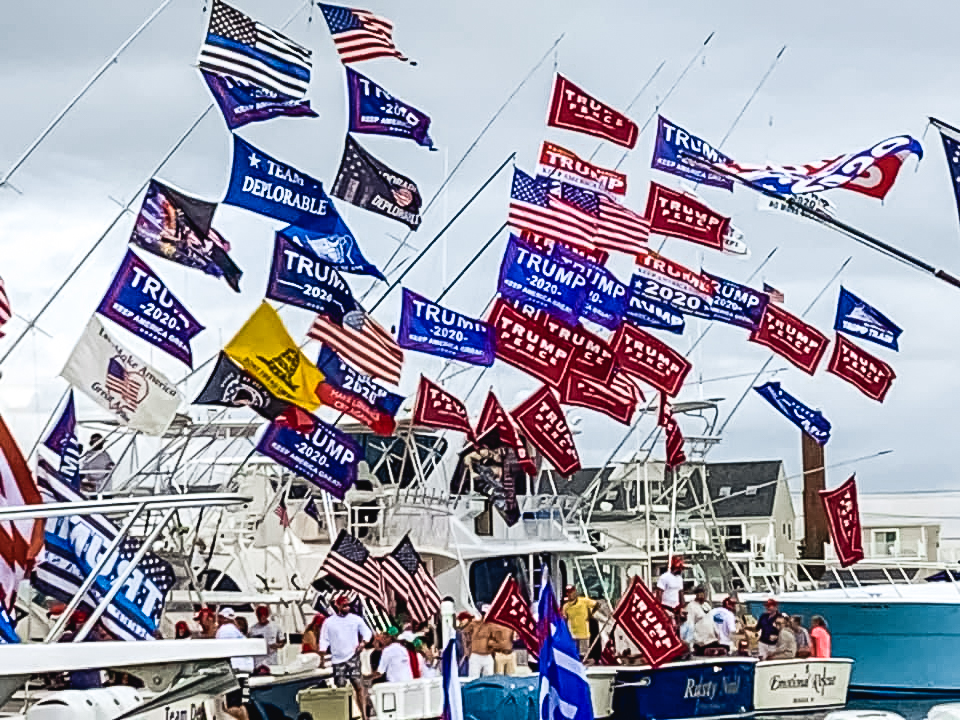 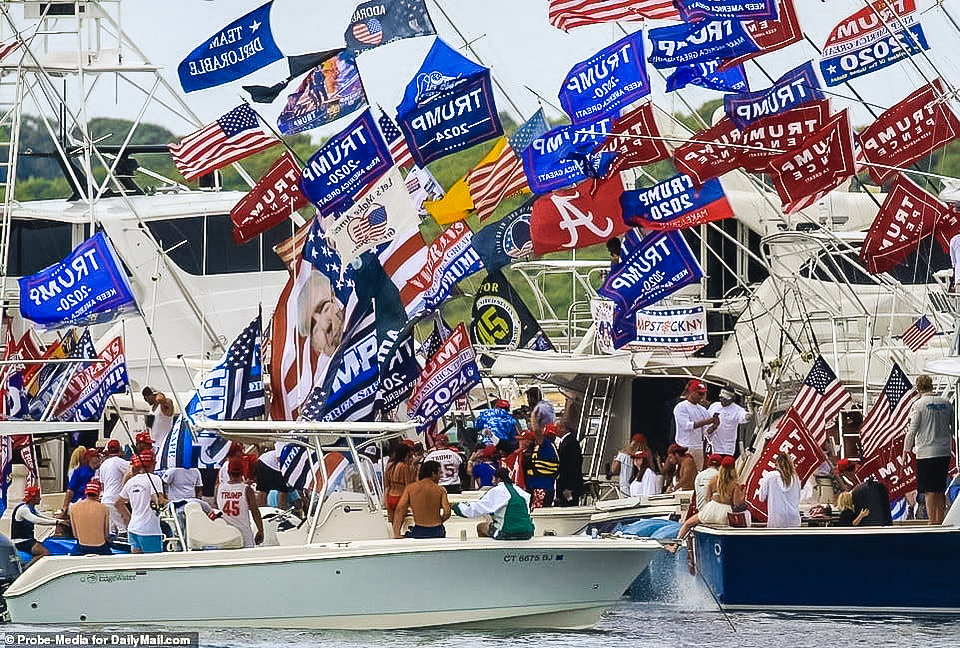 A trio of Trumpamania cloaked watercrafts headed up the nautical nirvana starting with Team Deplorable, a 63-foot Bertram Sportfish owned by their mate, Brooklyn Joe. One guest making the Deplorable cut was Thomas Mundy, and while the name may not ring a bell the face sure will. Mundy was the jovial, hand-waving DJT body double surrounded by a suited-up Secret Service-esque watchman. At first sight, the main attraction fooled many (myself included) into believing it was our beloved Big Daddy, No. 45 himself. 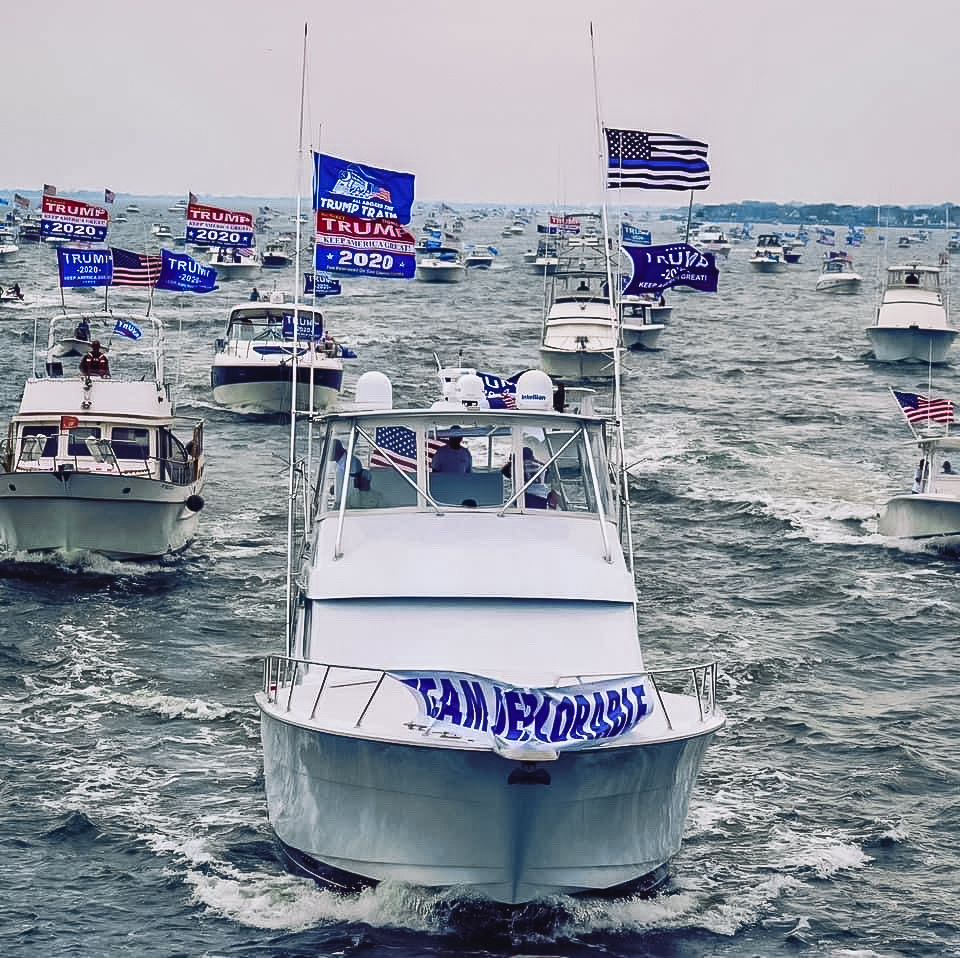 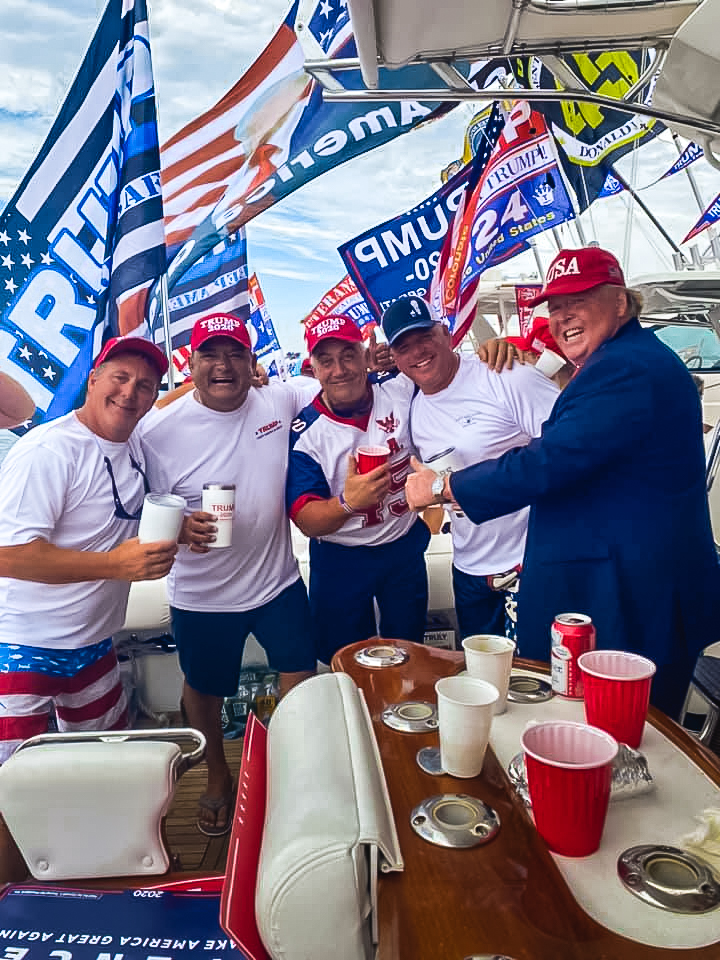 Second in the Trump train was the Lomangino's inviting 39' Family Love. Living up to the name, the open Tiara yacht was filled with just that – family and love, and I personally thank the fun Italian famiglia for welcoming me to join in. Rounding out the triad was a surprise appearance from Captain Trump and his wife Laura with the Official TRUMP Boat, thanks in part to some crafty maneuvering from professional boat transporter Mike Smith, of Custom Transports LCC of South Florida. 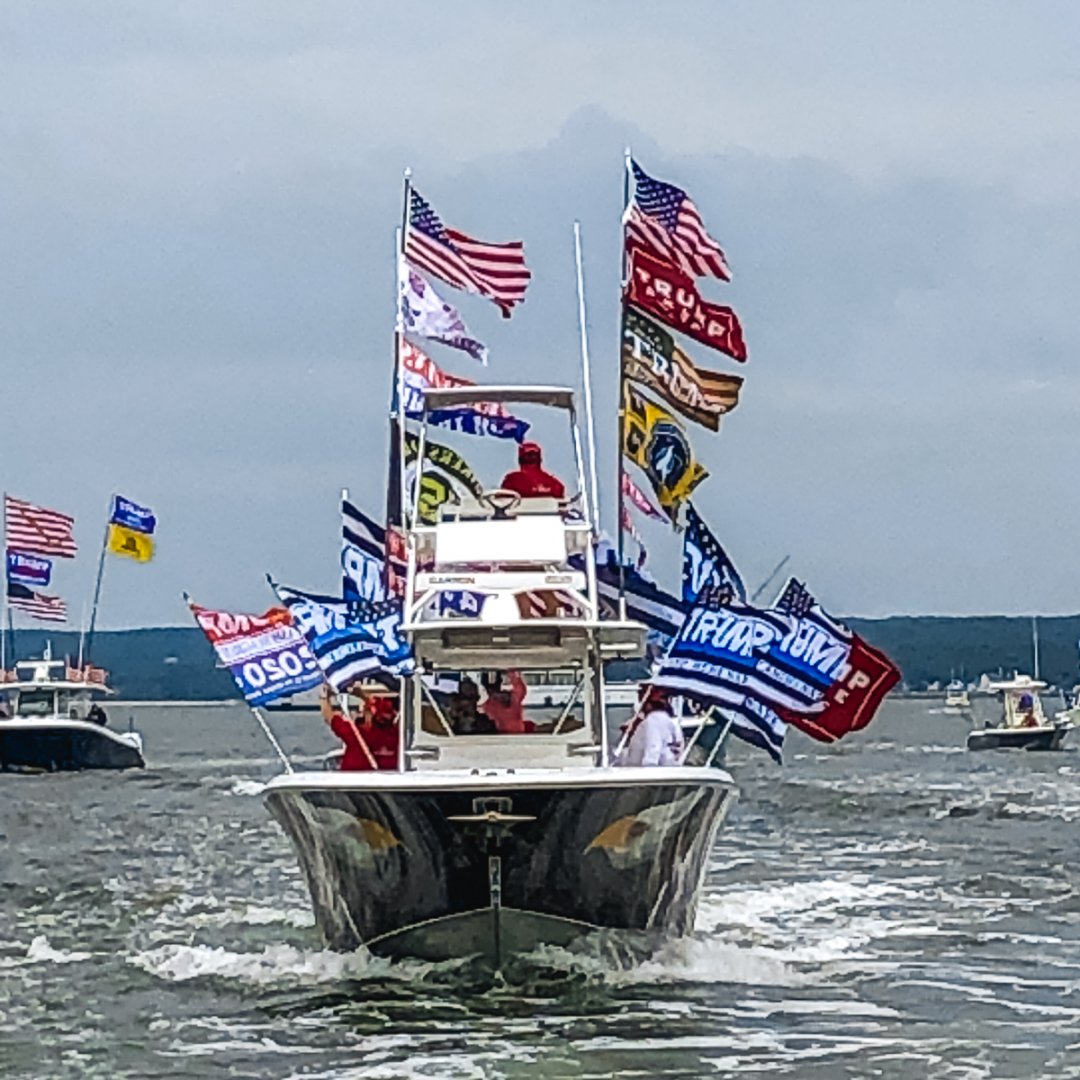 Smith delivered Carlos Gavidia's center console up to Long Island, but had his work cut out for him dodging debris up the coast when heading into the wrath of Hurricane Isaias in the Carolinas. To protect the Invincible from damage during the overnight hours, it had to be tucked in between two tractor trailers, and in the midst of the mayhem, protective tarps had to be strategically placed across the port and starboard to conceal the TRUMP name in fear of vandalism from the unhinged TDS anarchists infesting our great land. 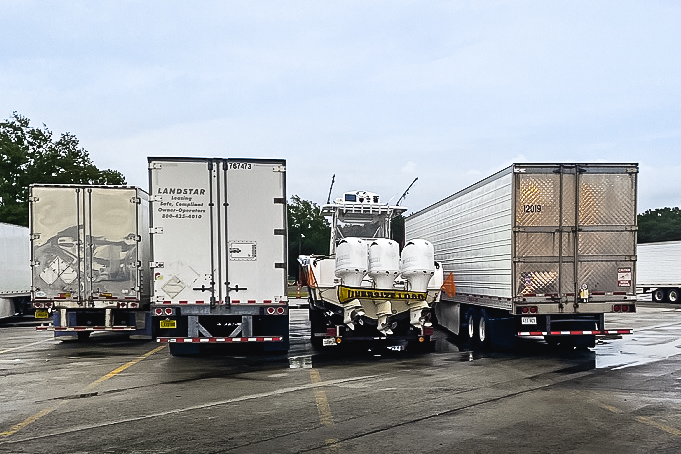 Next, the George Washington Bridge "half an inch hurdle" was coming up when nearing the end stretch. Forking over $2,000 for fees and permits brought traffic to a standstill, and all toll booth lanes were blocked as a police escort guided the precious cargo across. Sounds exciting... having the entire GWB shut down just for you, but that wasn't the case for Smith, and his daughter Jersey and her boyfriend who were both along on the trip.

Collectively, the boat and trailer measured 13 feet 5.5 inches high and the bridge was 13 feet 6 inches, leaving only half an inch of wiggle room. Seeing that keeping calm under pressure comes with the territory for Smith who is also a 14-year lieutenant tactical firefighter and SWAT team paramedic certified in hazardous materials response and nuclear radioactive bomb id tech; I think it's safe to say he has faced tougher (but probably not tighter) on-the-job challenges. 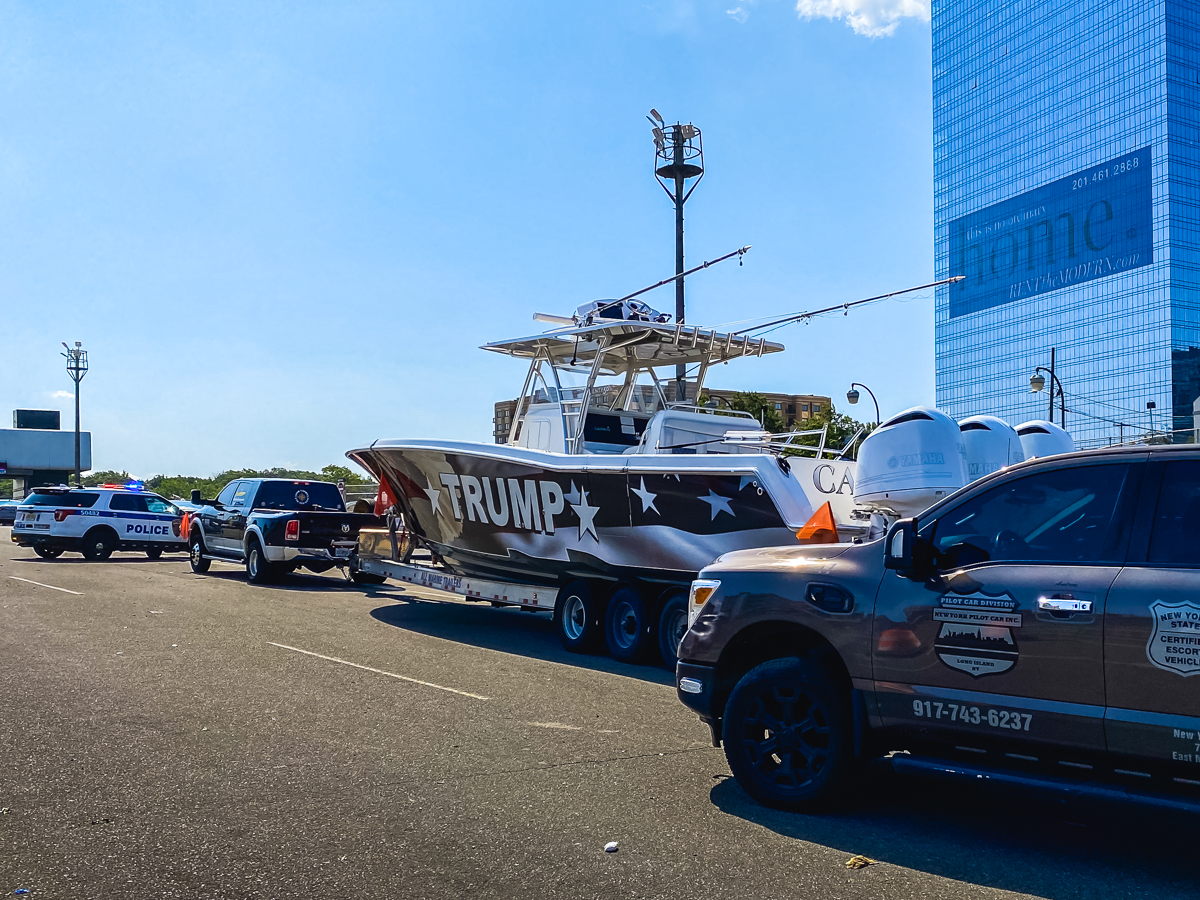 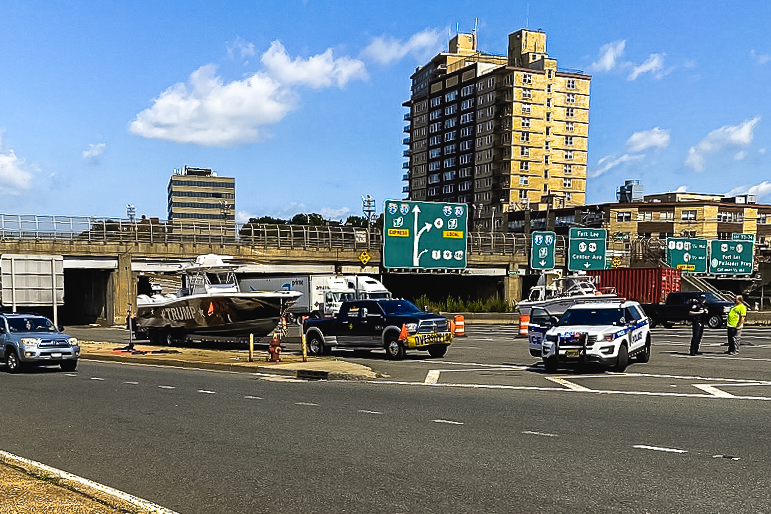 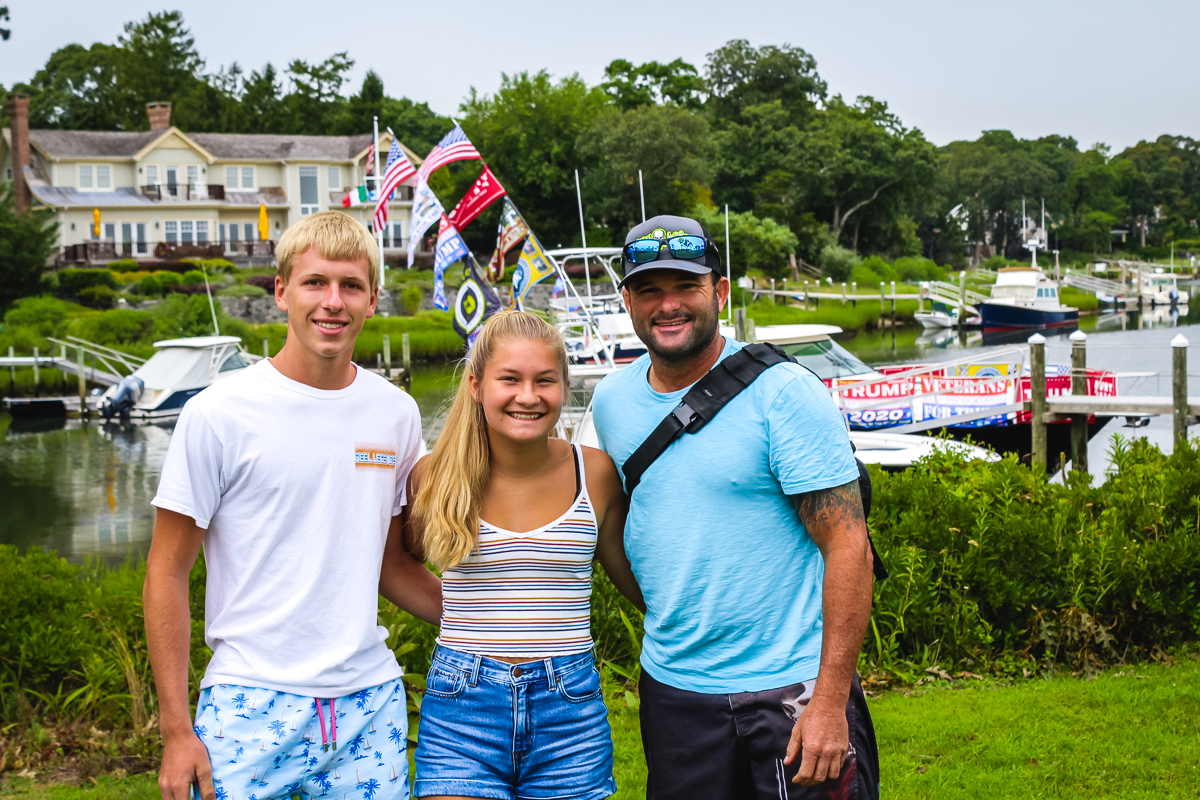 With the Official TRUMP Boat finally in New York waters next to Family Love and Team Deplorable, the patriotic push set out from Noyack Bay northward passing Shelter Island en route to Orient Point where the convoy exploded in size and smiles while navigating the snowballing swells across to Montauk. Approaching the Montauk Lighthouse, captains eased the throttles back and a few special words were spoken acknowledging the exploding "floating fight for freedom and liberty" parades, blessing the Trump family in prayer, and remembering all the region's fallen fishermen. 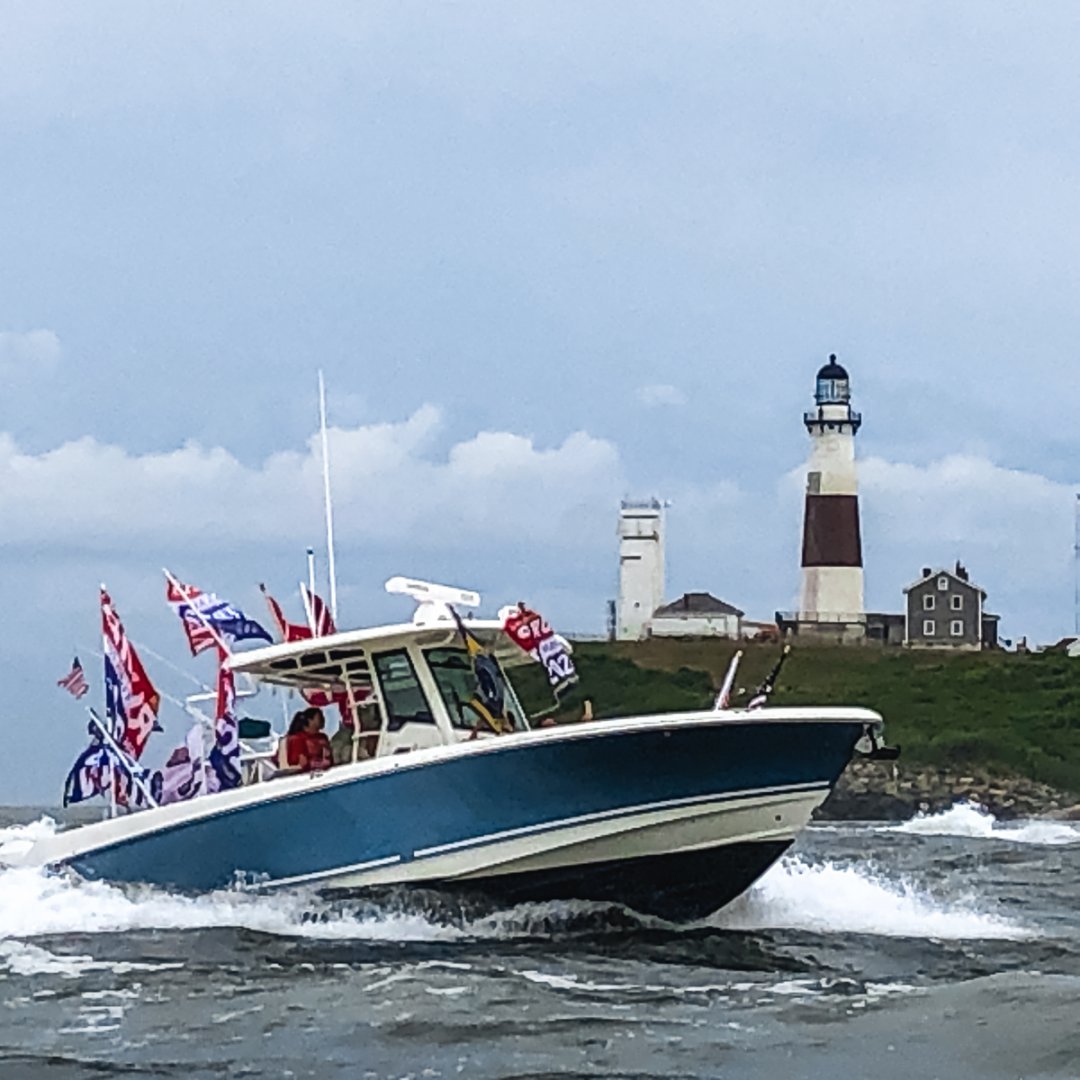 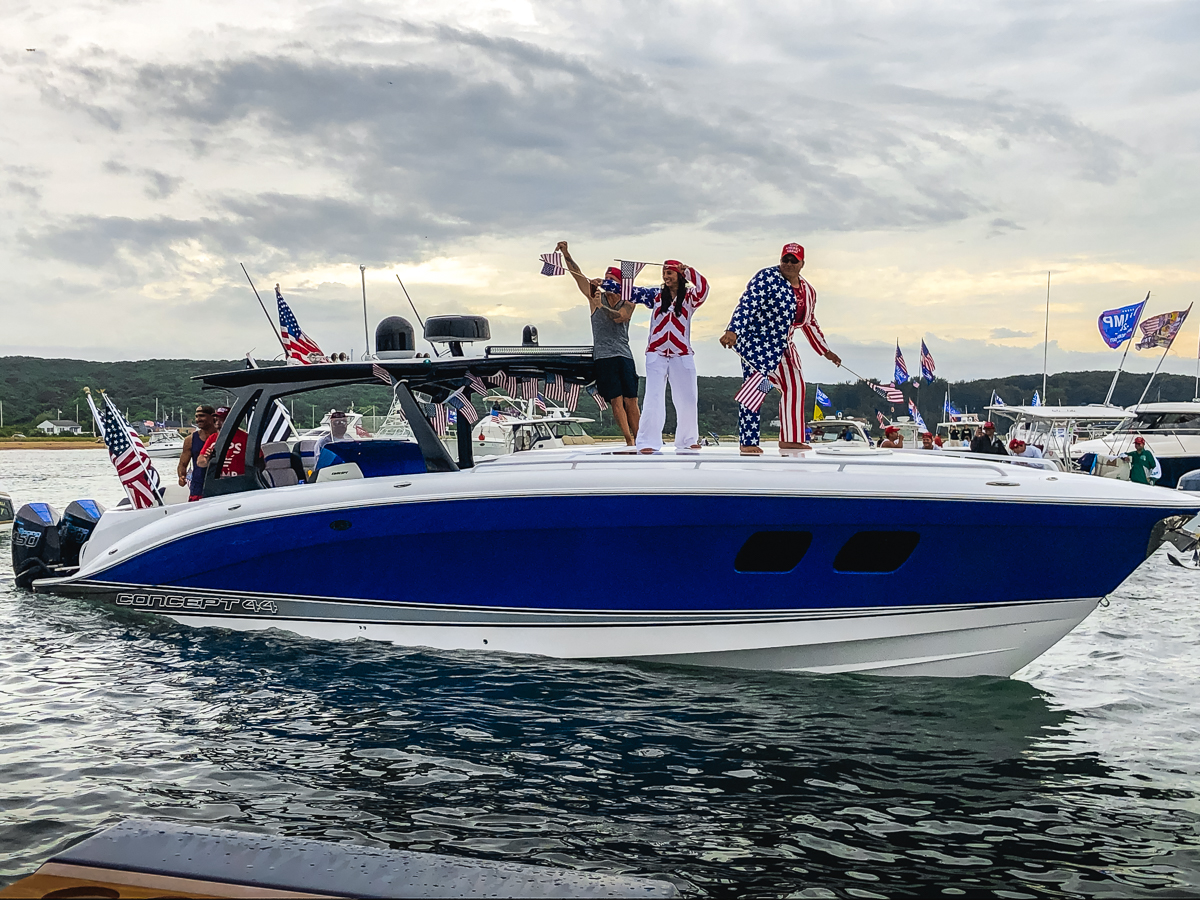 Friday forecasts predicting potential downpours were on "cue" and a storm was upon us, but the sporadic drops falling out of the heavens were nothing in comparison to the gusts of guests who blew in blanketing the bays and lighting up the skies in signature red, white and blue. From the Back the Blue and No More Bullshit 2Q2Q banners to Operation Flag Drop head honcho Dion Cini's "donning of his grandiose super-sized pennant of the Donald" on the lead boat – it was Trumpness all around the Sound! 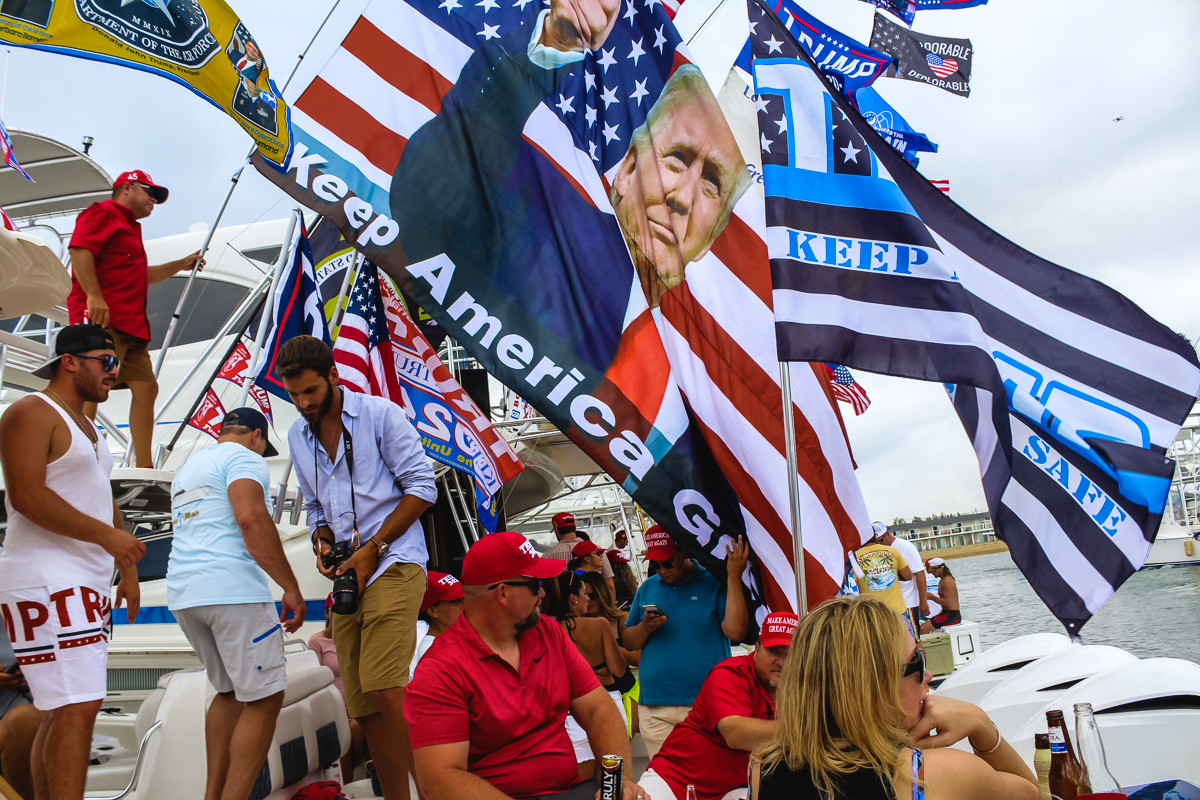 Part two of TrumpStock continued at the Navy Beach anchor-drop just past Montauk. Oozing of American spirit, the seaside soiree was stocked with stars and stripes but one extra-special "luminary" stood out – and that was Donald J. Trump Jr. 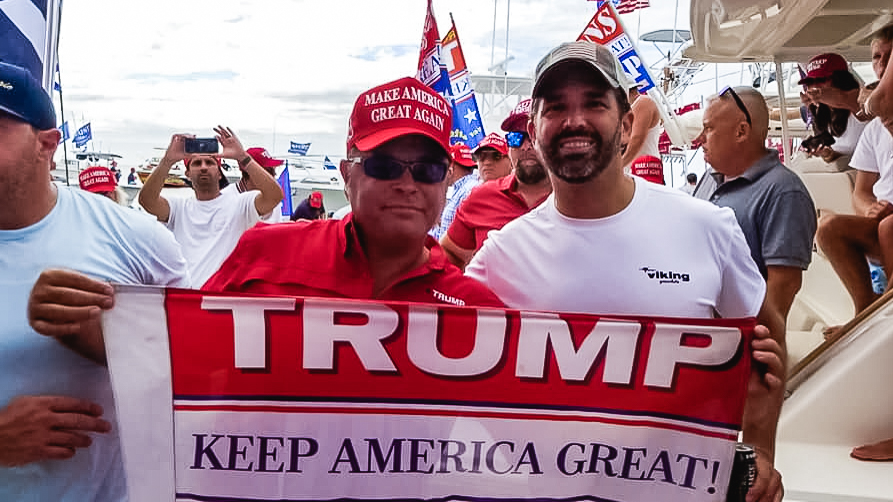 Accompanied by his girlfriend Kimberly Guilfoyle the former Fox News anchor from The Five, the couple joined the raft-up chatting with the deplorable bunch of us all afternoon. My few unrehearsed lines with Don Jr. were casually inquiring to see if he read my RDP story on his dad's birthday Trumptilla, to which he responded, "Yes". Questions continued from other partygoers pertaining to a potential run for office in 2024, to those more interested in the Viking shirt he was wearing from his buddy's yacht DeepLurable. 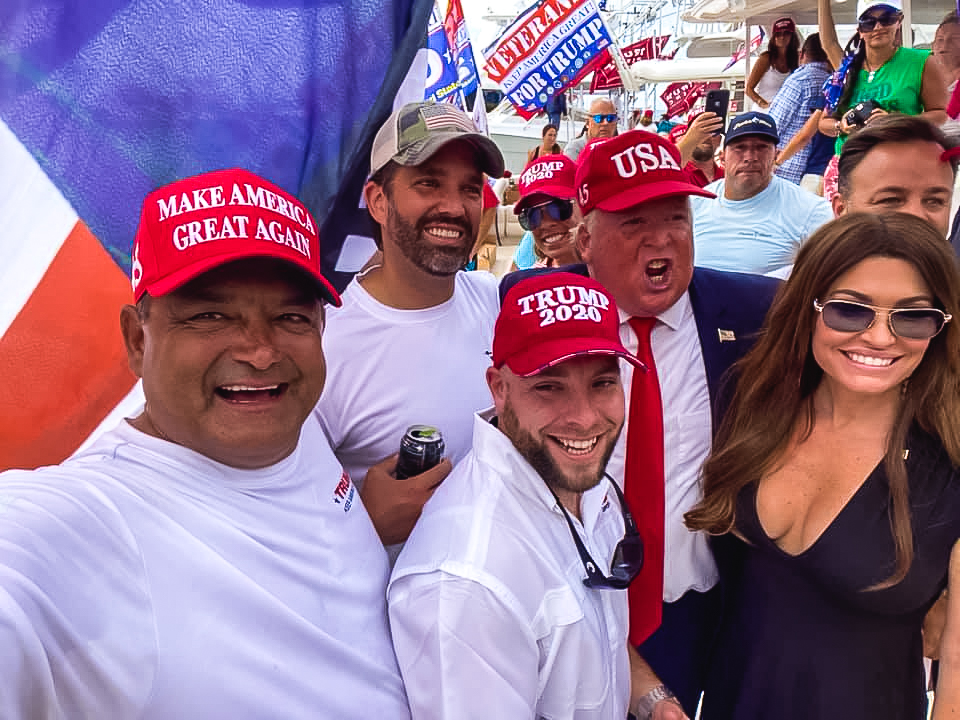 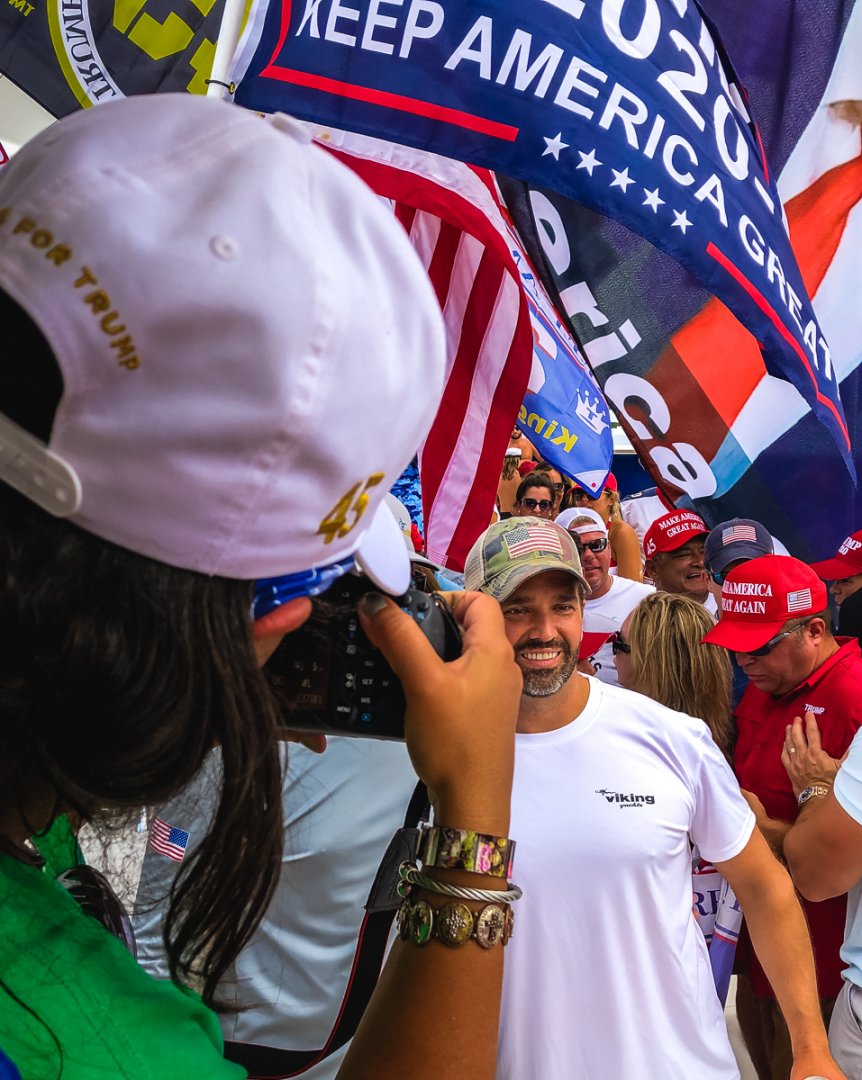 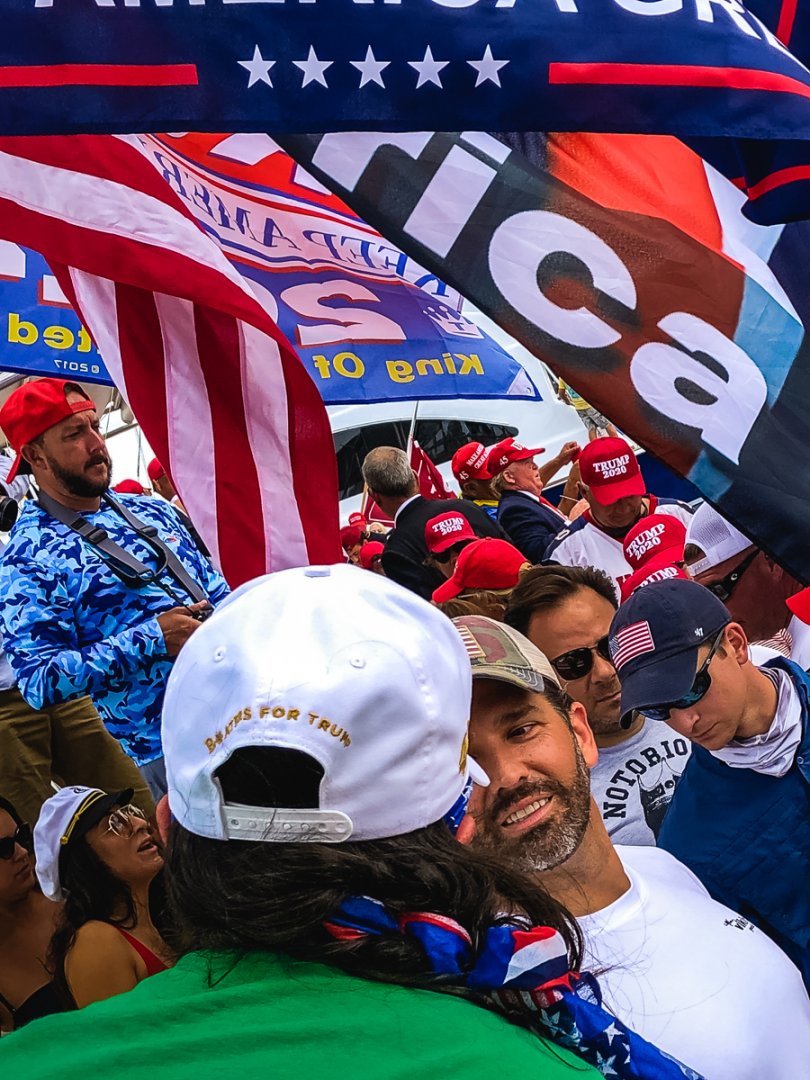 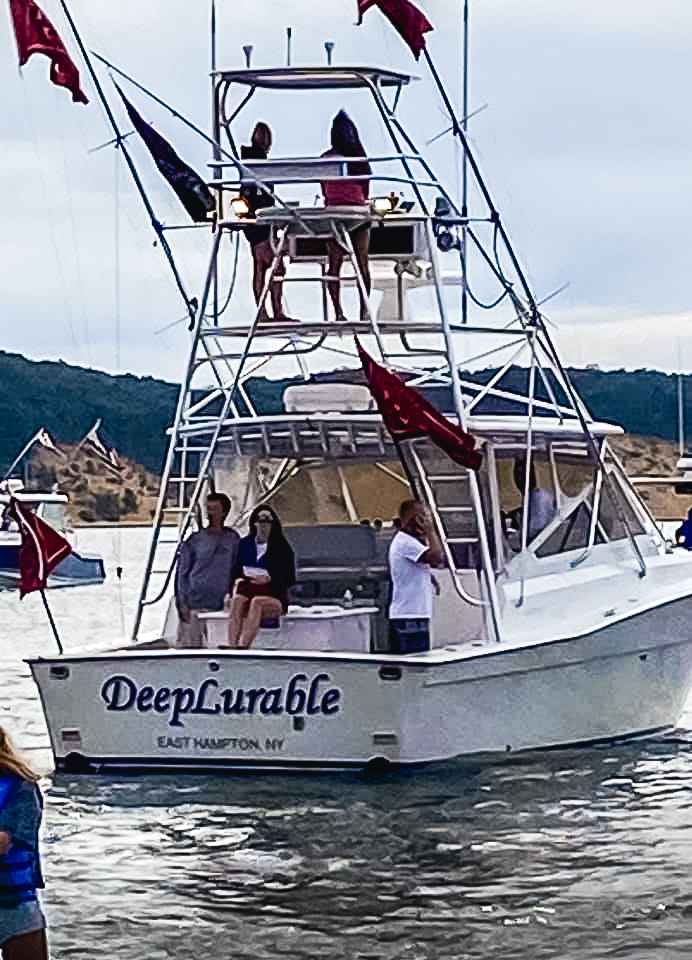 Positive vibes seeped through the salty summertime air as did high-flying Trumporabilia tossed in all directions from campaigners in attendance, at times landing nearer to seagulls than seagoers, in which case a collective of jet-skiers and kayakers salvaged the sinking SWAG for boat deck delivery. 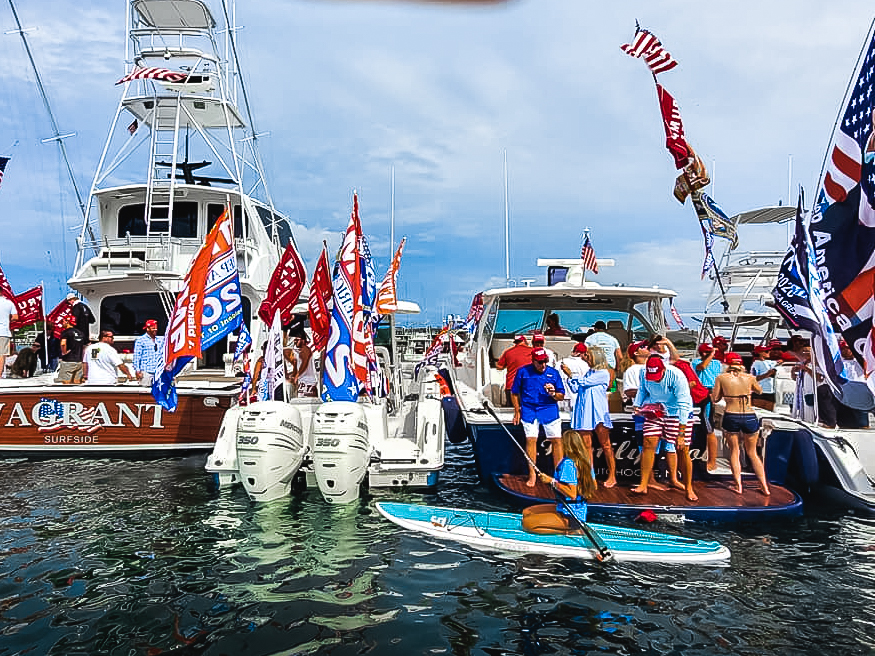 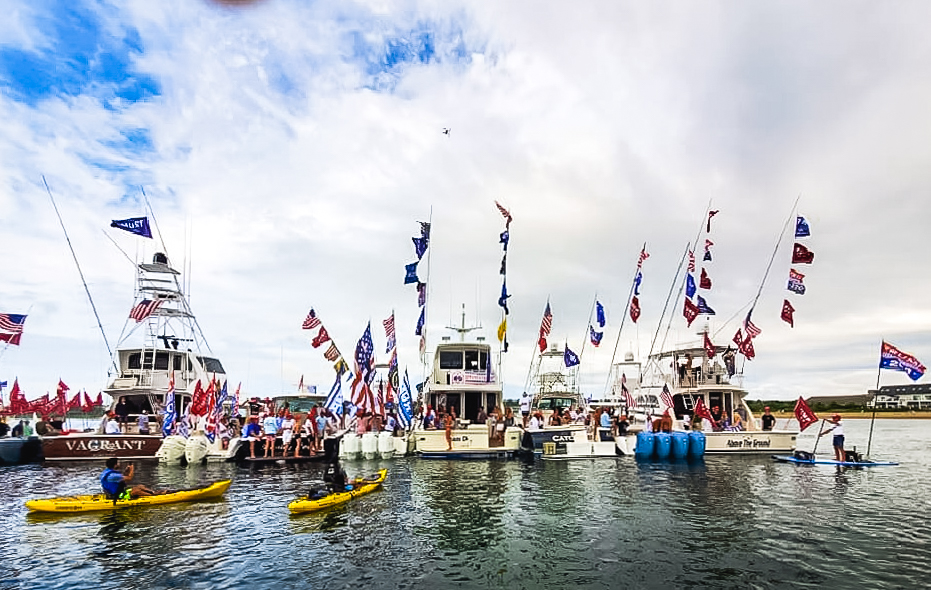 Absurdly enough, one apparent GPS-devoid kayaker was spotted paddling around the festivities like a dumb-found duckling displaying a rhetorically-ridiculous sign scribbled with Biden 2020 "Make America Sane Again". As if only! Babble had also been brewing that a basement Byeden boatercade was hiden' in the bay, but since sugar daddy Soros only provides complimentary bricks, bottles and bats and not boats, no such spectacle surfaced. 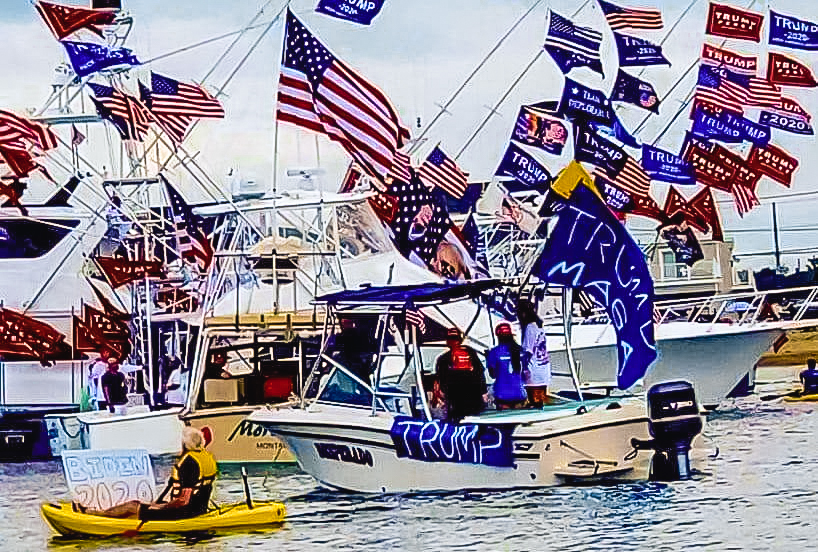 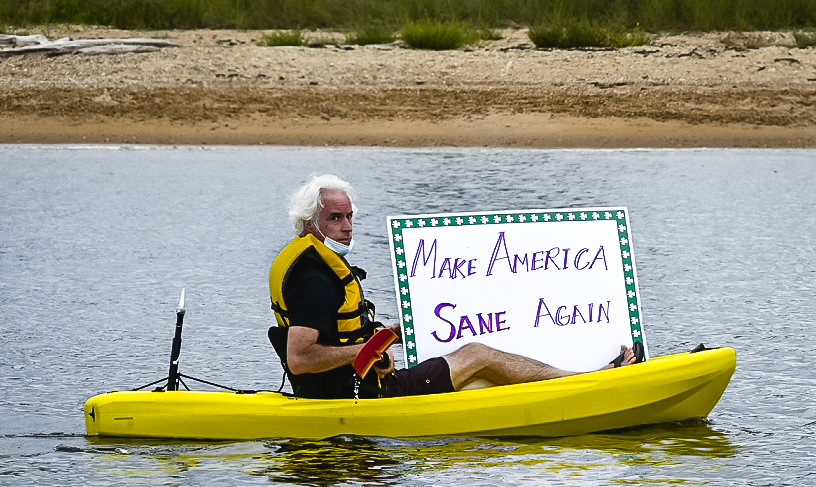 What did surface however, were the TrumpStock winners of the day. Hands down, the award for the youngest and cutest Trump fan went to Kadence, a little girl raised with respect for her country and a lot of love for her president. Secondly, clinching the competition for best patriotically decorated vessel was Capt. Chuck Morici of the 60' steel dragger Act 1. The Montauk fisherman sure had a tale to tell after claiming his prize the next day. Morici was

invited to meet the "real" Donald J. Trump who swept into Long Island by storm for double charity functions. 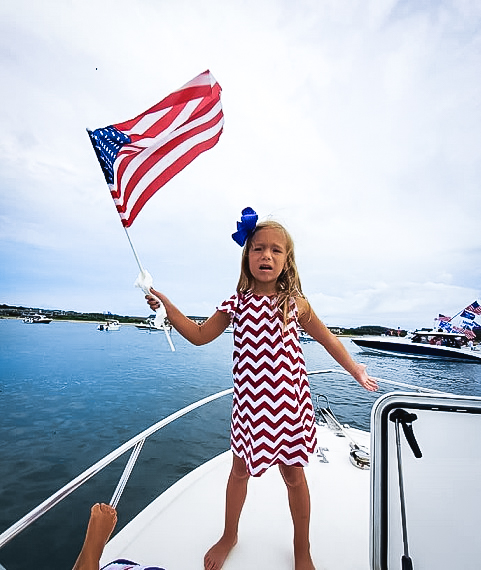 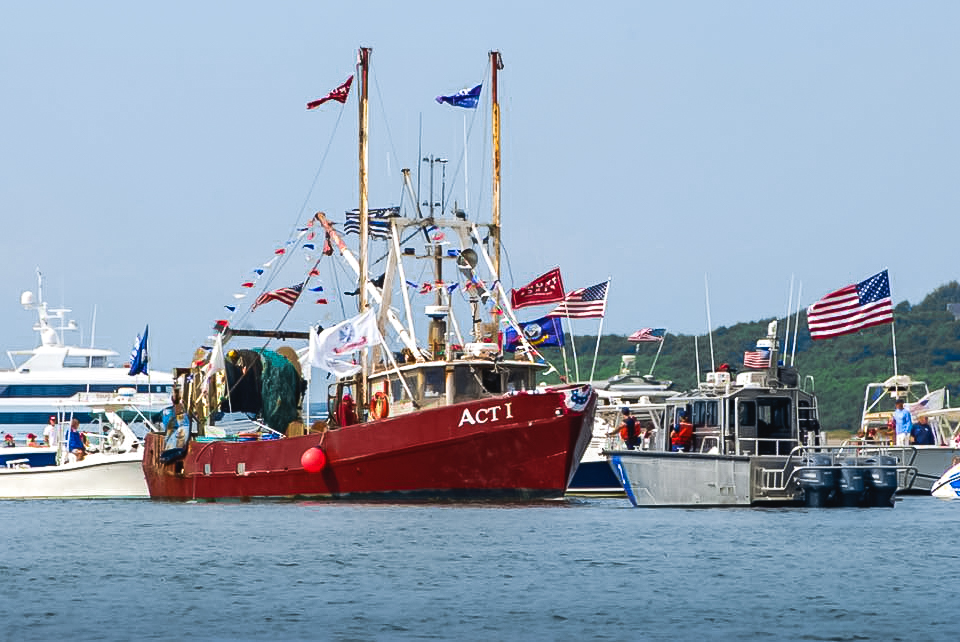 And whilst the presidential fundraisers increase the required capital and coinage, it's the erupting tsunami of Boaters for Trump FUNraisers keeping momentum at a maximum. With Labor Day in the books, less than two months remain as we watch an incoherent, child-fondling 47-year political failure and his fraudulent knee-dropper flip-flopper wing woman try to advance their dumpster fire, anti-American negative narrative.

The good versus evil government MASKerade scam is up and the results of the global bio-virus have been revealed. How'd drinking that "two weeks to flatten the curve" enemedia brainwashing Kool-Aid taste? Just ask the folks on week 25 who have nothing to show but flattened livelihoods, burned down businesses and future dreams demolished!

Nevertheless, the choice still remains: obey your maskology 101 mandate to combat the Common Core juiced-up stats of CONVID-1984, or join the pumped for Trump, red MAGA-capped crusaders in the fight to preserve the U.S. Constitution. Especially that biggie No. 2… because once the guns are outlawed, only the outlaws will be packing.

But here on Riverdavesplace.com WE LOVE FAST BOATS as much as our freedom, which is why many of us are just killing time anxiously counting down to the return of the fall season fun runs and boat show hardware unveilings. With that said, the plan was to transition from Trumptillas back to triple digits and transoms beginning with the fresh artillery soon to pop from Outerlimits. If you missed the memo – the new editions will be packing outboards!

Then crazy enough, while on my way up I-95 to the OL epicenter in Bristol, Rhode Island, for a factory sneak peek of the upcoming catamaran, center console and RIB, I discovered another armada was set to sail the following morning in Massachusetts. This resulted in an eventful weekend mostly sitting in ridiculous amounts of traffic, and one more flotilla further north deserving to be recognized in the powerboating world. (I promise the Outerlimits are coming!)

That Saturday, New Englanders for Trump rose to the occasion with their picturesque Massachusetts rendition reeling in nearly half a thousand boats thanks to Bert Aggas in his Larson Escape to Serenity and James Haynes with his Carver Joy Ride. The co-organizers took their fleet from the mouth of the Merrimack River to Salisbury Beach before cruising in single file formation through the historic, patriot-packed Newburyport Harbor. 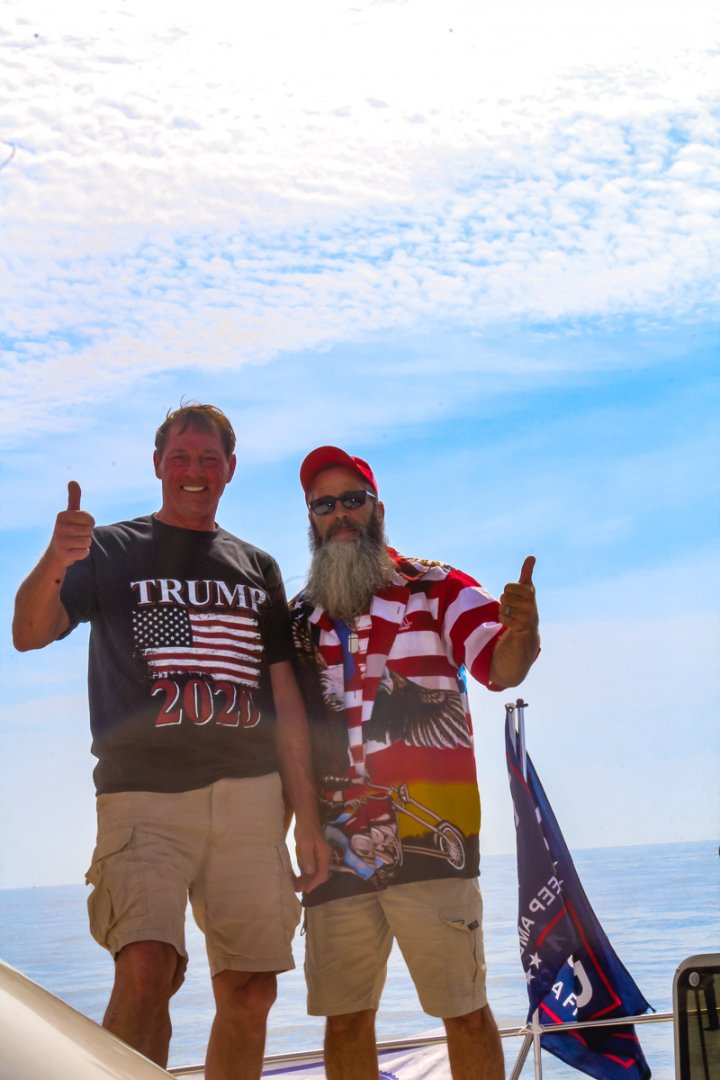 For the initial coming together of all the boaters at 10:30 a.m., it was mesmerizing to be standing in any direction from a 360 degree viewpoint and watch the boat count magically mushroom (as in multiple, not get high) into MAGAmania. Like TrumpStock, the slightly rainy affair commenced with a special prayer and salute to the cause spoken by Aggas, which had been graciously penned upon request from him by his reverend.

And while Trump Jr. "missed the boat" that day, local area politicians like John Paul Moran and his dedicated team showed their support. Moran is the leader of the new conservative movement fighting for unity, liberty and opportunity, and is currently running for U.S. Congress. A video documenting the "Proud to be an American" celebration on the sea was produced thanks to drone footage captured from 617images.com, and the Boston-based business also kindly provided RDP the aerial photos for this piece. 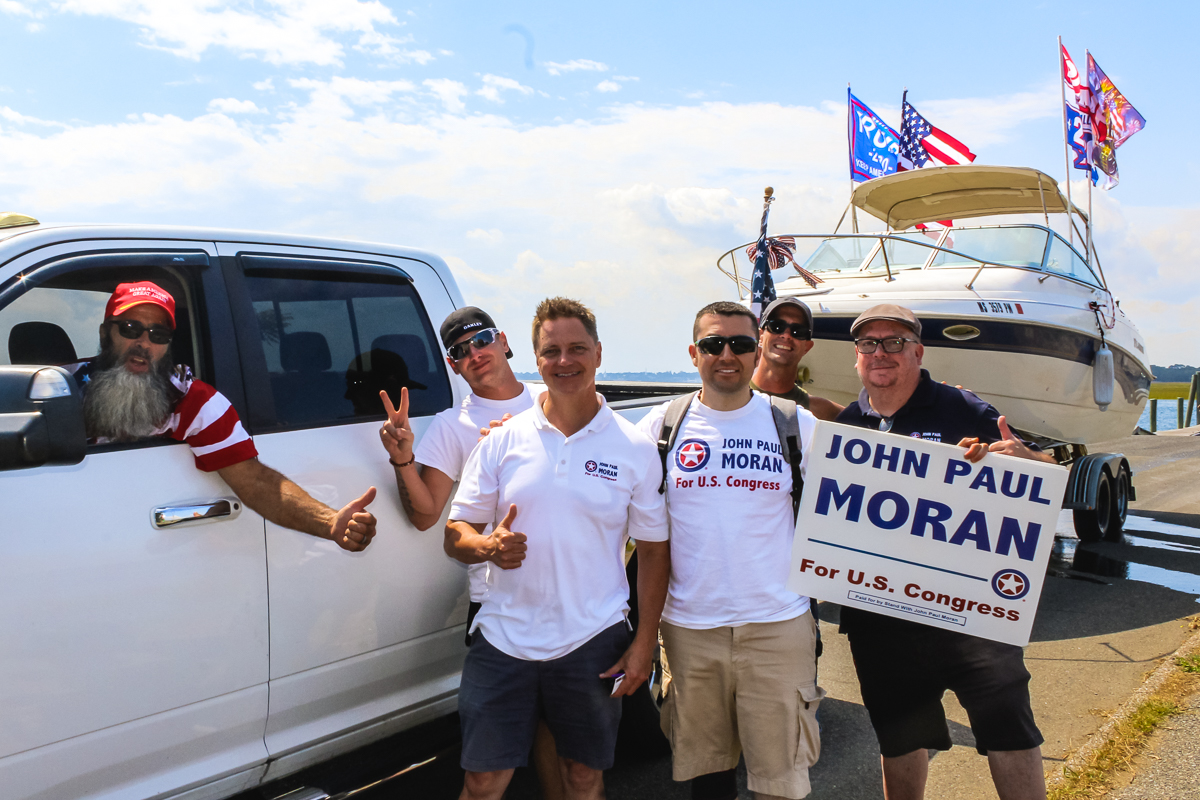 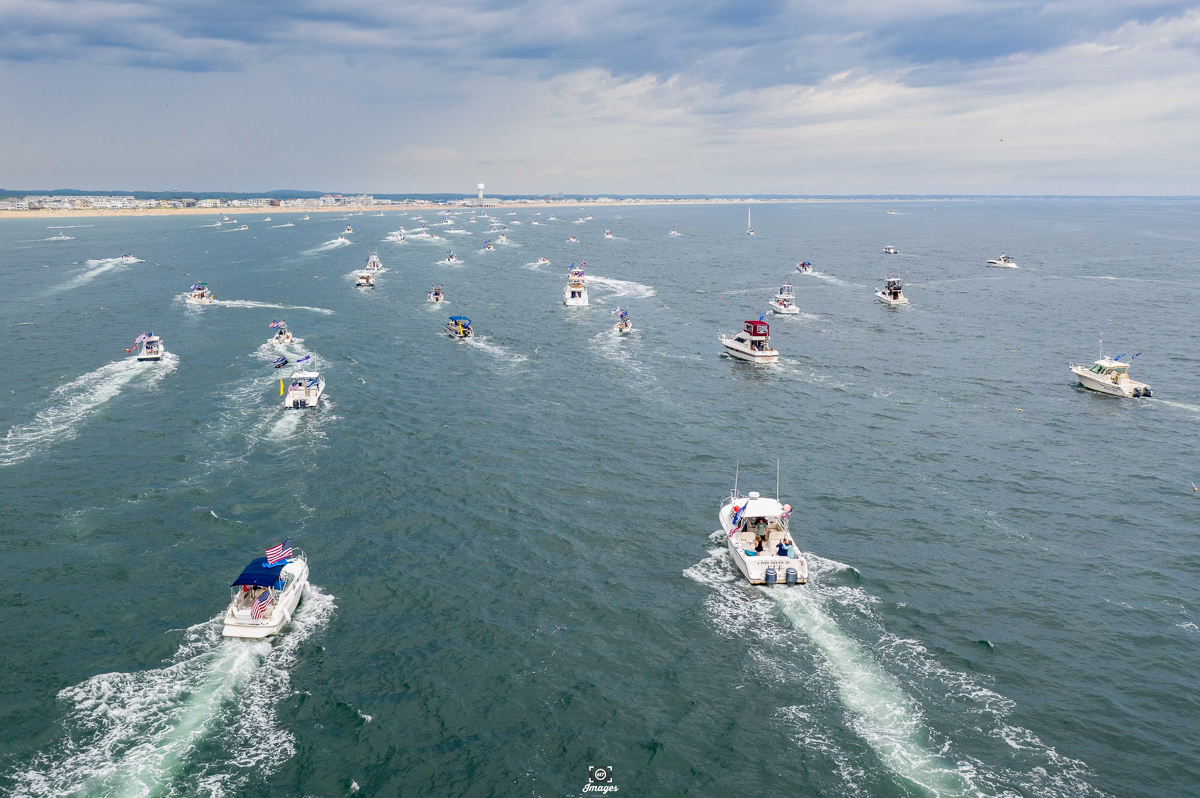 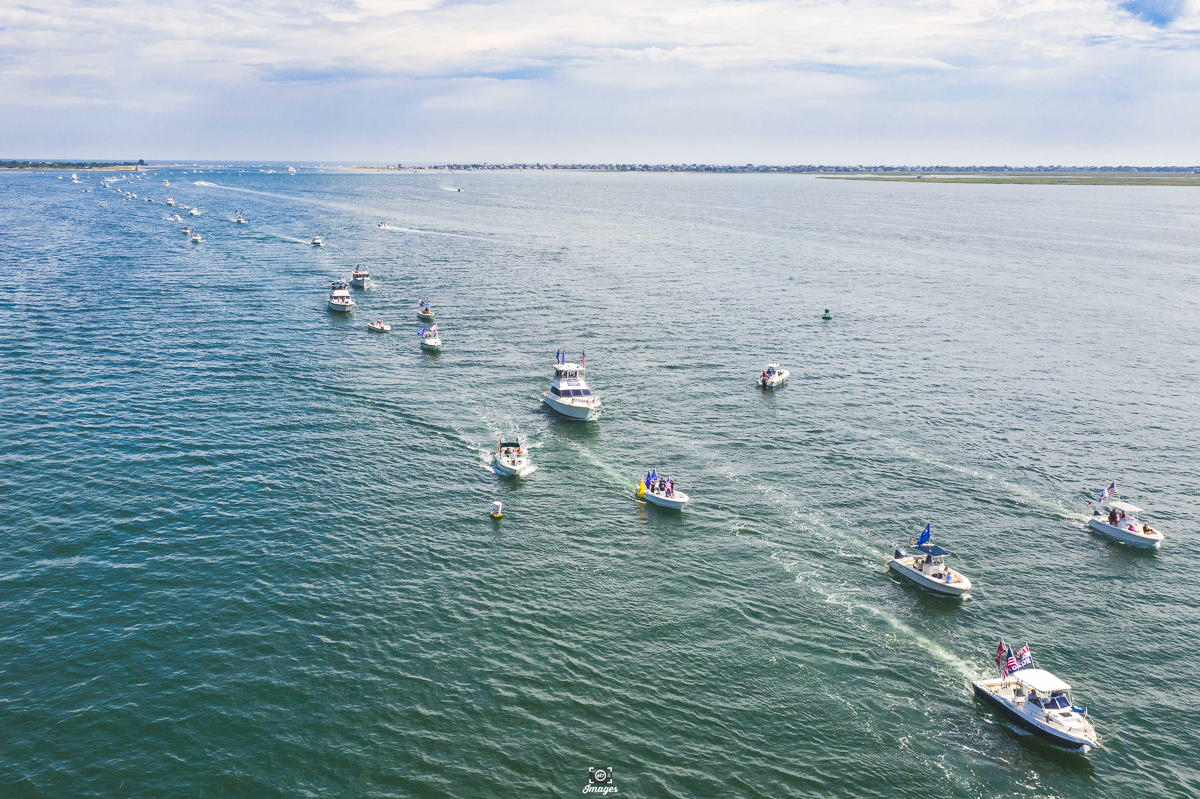 Anyone wanting to experience the energy, grace and glory produced from the Gavidia- grassroots revolution, there are plenty more water rallies in the weeks to come. Check out The Official TRUMP Boat and Boaters for Trump New York on Fakebook for dates and locations around the USA, but do it daily as the fascist, social-ist media repeatedly scrub the pages.

The silent majority will soon scream when Trump wins the election. The victory will also be his "fault" and like always he will take the "blame" but in this case...
for being the Greatest President of all time!

The strongest weapon in the United States is a patriotic American.

Make no mistake patriots resolve will be absolute! 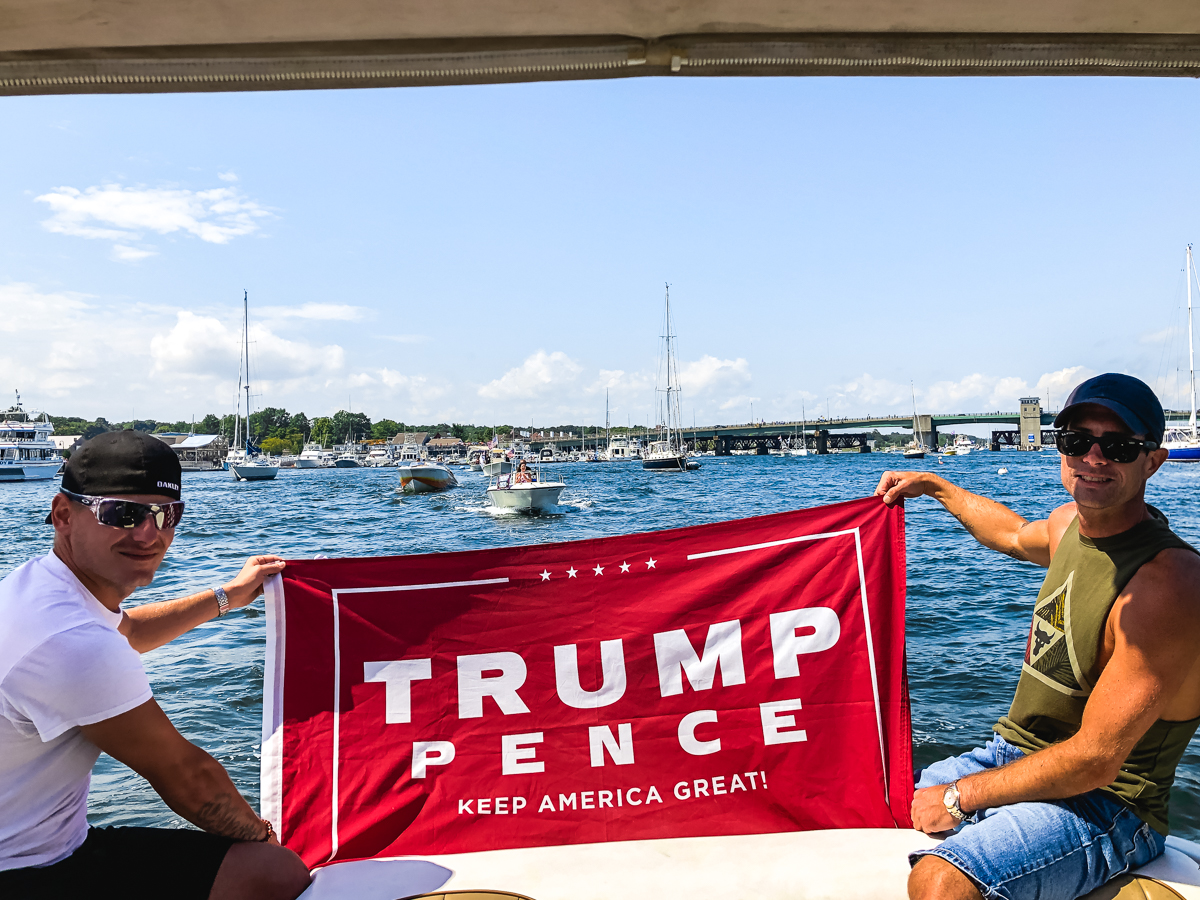 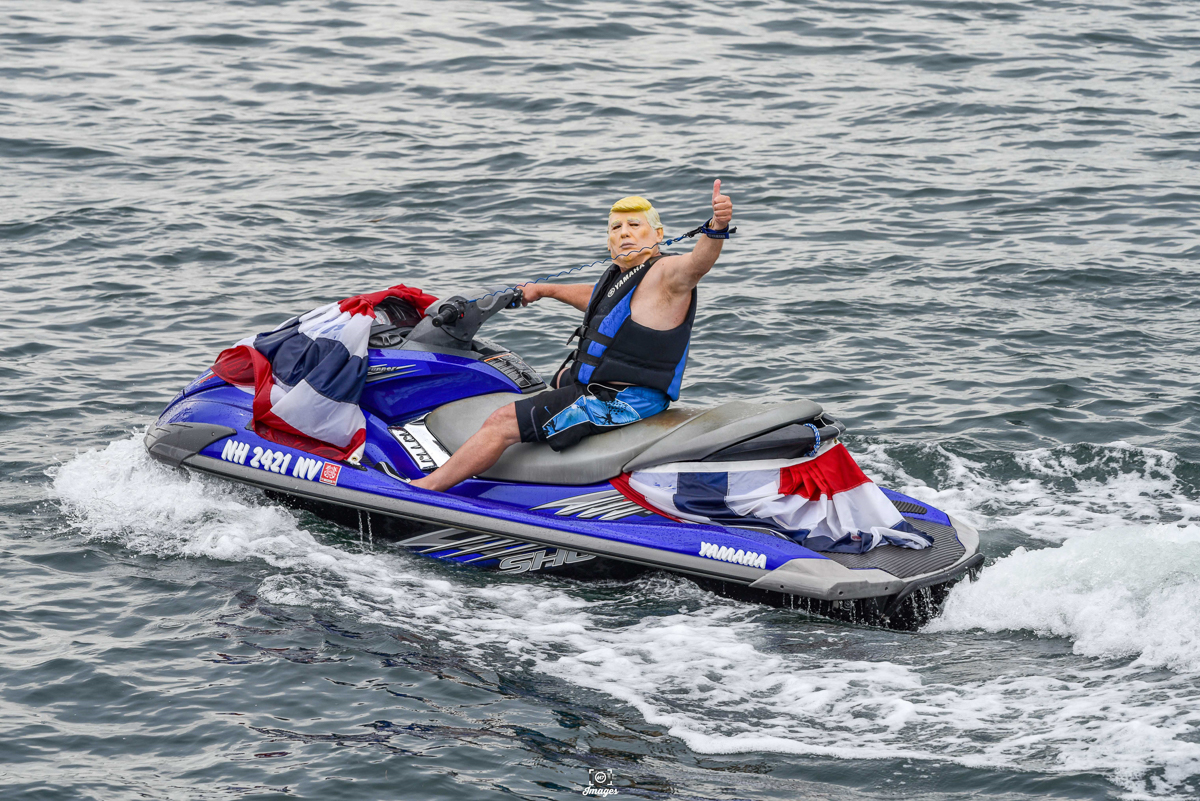