THIS IS WHAT I REALLY DO FOR A LIVING 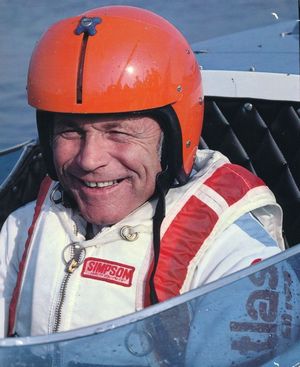 Since there were more than a handful of you RDP faithful who seemed to like my account of Bill Muncey’s breakfast meeting with famed L.A. Times sportswriter Jim Murray story, here’s another behind the scenes look which may surprise and perhaps enlighten you a little bit about what being a professional boat racer was really like in the 1970s. It surprised me.


It was a Wednesday, and I was in my office at Powerboat Magazine in Van Nuys, California. About 11:15am the phone rang and I picked up. It was Bill Muncey on the other end of the line.

“Hey Bob, what are you doing,” in the usual cheerful Muncey tone.

“Nothing special, just working on the next issue, and by the way, when am I going to get your column,” I replied.

“I am, I’ll be at your office in fifteen minutes, be ready to go, I’ll even buy you lunch.”

Not being someone who readily passes up the opportunity for a free lunch I said, “I’ll be waiting, something special about today?” 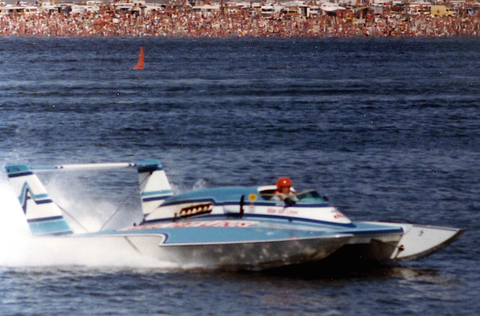 “No, just business as usual,” said Bill. “Thought you might like to see what I really do for a living.”

I said, “I know what you do for a living, you drive that big blue and white thing with Atlas Van Lines plastered on the side.”

“Yeh, okay, get ready for an education.” And Bill hung up. 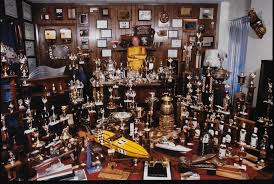 I waited downstairs and sure enough, Bill pulled into the Nordskog Comp Center parking lot fifteen minutes later. I hop in his rental vehicle and off we go, still not knowing our destination. Bill jumps on the 405 Freeway, then the 134 and finally on to the 170 south which takes us to downtown L.A.

By now my curiosity is getting the best of me and I ask, “Where are we going? Seems like kind of out of the way just for lunch.”

Bill replies, “Just relax, we’ll be there in about five or six minutes.”

A couple of minutes later, Bill takes an offramp and now we’re in the heart of downtown Los Angeles. Since I’m an L.A. guy since birth, I’m in pretty familiar territory. Bill makes a couple of more surface street turns and pulls into the parking lot of the Blarney Castle, a restaurant I’ve been to a couple of times during my college days. We hop out of the car and Bill opens the trunk. Inside is what looks like a 16mm movie projector, a portable movie screen, about 100-feet of extension cord and a metal film cannister. Bill asks me to grab the screen and the extension cord and off we go to the front entrance of the restaurant
. 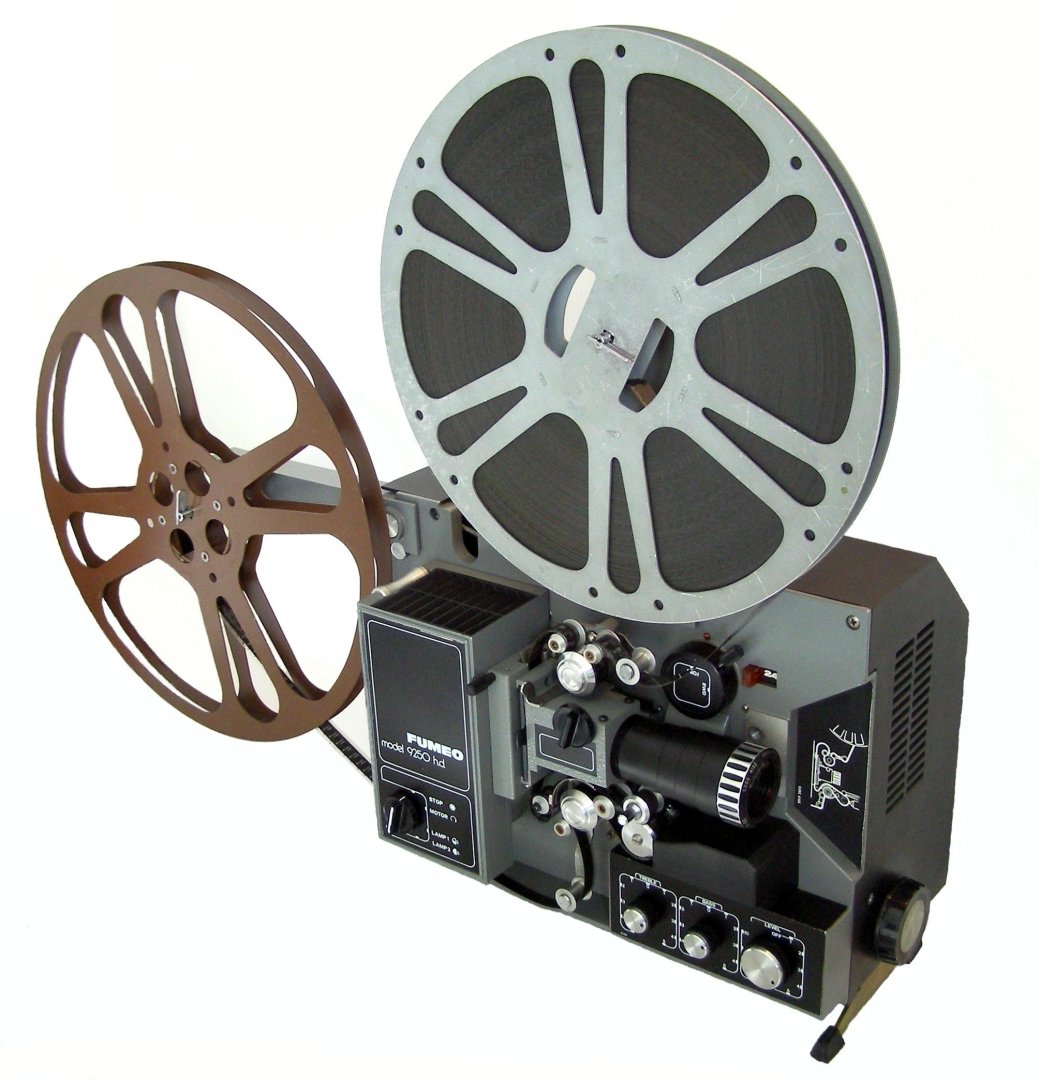 Once inside Bill asks a waiter where the banquet rooms are, and which one has the Rotary Club meeting. We quickly shuffle off to the rear of the dining area, through an unmarked door and finally duck into a small private room set-up with banquet style seating for a couple of dozen. 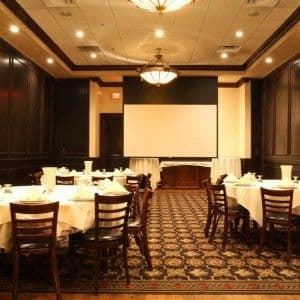 There we are greeted by a guy who introduces himself as the local Atlas Van Lines dealer/sales rep for the area. Apparently, the Atlas Van Lines guy is a member of the Rotary Club and it was his designated month to provide the guest speaker for the other Rotarians once the business portion of the meeting was over…..and Bill was the entertainment.

There were less than ten people in the room at the time or our arrival, so Bill and I went about setting up the screen and projector. A few minutes later, one of the people in the room asked everybody to be seated as a waiter brought out a tray of small unimpressive salads. Bill and I grabbed a seat and a guy who appeared to be the president of the Rotary started reading off an agenda. I was about halfway done with my salad when I noticed that the room was less than half filled, maybe twelve or fourteen people at the most counting Bill and me.

Well, while some more business was being taken care of, the entrée of an overdone chicken breast and some kind of green mystery vegetables were served. Not unexpectedly, the chicken and the vegetables all tasted the same.

Once the food was out of the way, the Rotary president called the meeting back in order, made a couple of announcements and introduced Bill to the dozing group who appeared to have no idea who he was. That was my que to man the projector and get ready to show Bill’s eight-minute promo film about Unlimited hydroplane racing and Atlas Van Lines. 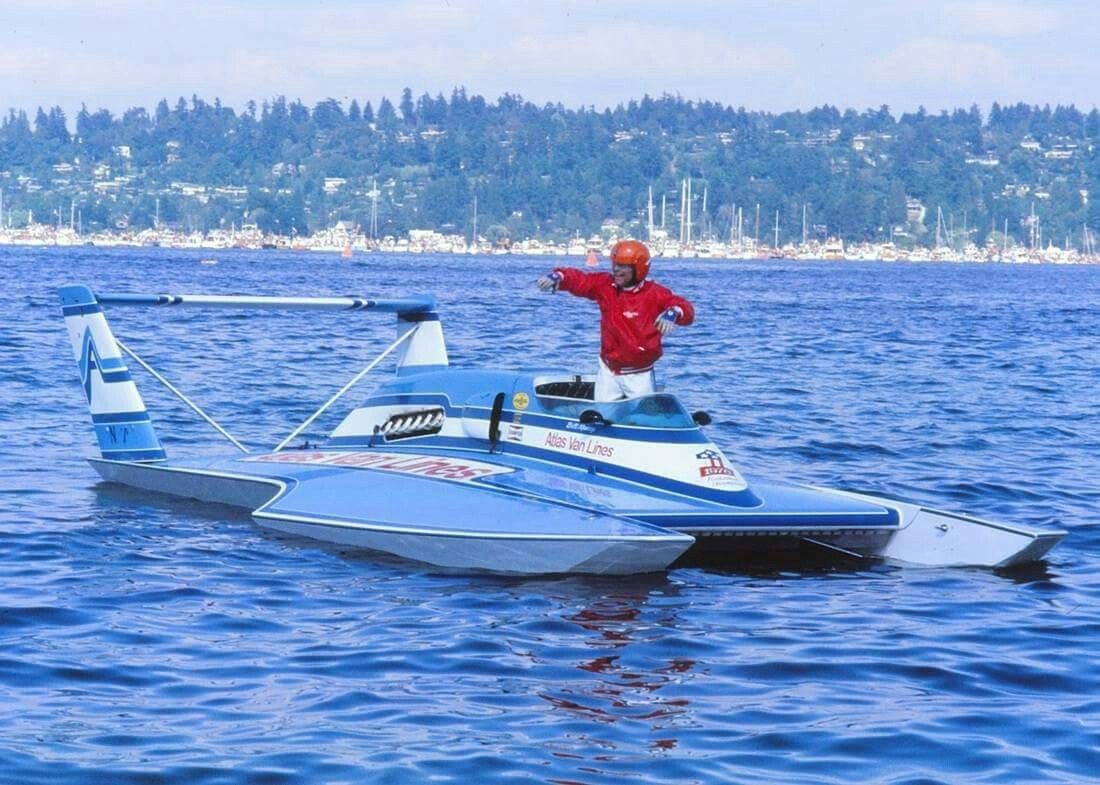 Bill attempted to inject some enthusiasm into the room, but it was fundamentally hopeless. He signaled me to start the film and for the next eight minutes we might as well have been talking about baking brownies. When the lights lowered, a couple of the Rotarians stealthfully slipped out of the room unnoticed. We were now down to single digit attendance. It was pretty evident that this wasn’t a boat racing crowd.

The film ended, Bill said a few more words about Atlas Van Lines and what a great company they were, and then asked if he could answer any questions. Crickets.

With that, I started to rewind the film still on the projector. Bill took down the screen. No one left in the room asked for an autograph. 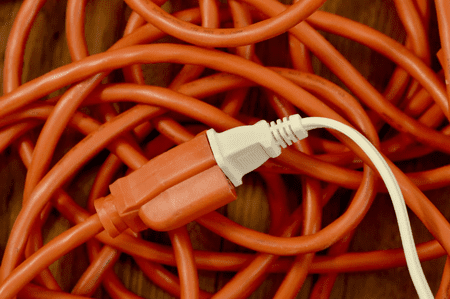 I gathered up the extension cord and we were headed to the parking lot. We put Bill’s work tools back in the trunk and off we went.

The car ride back to the Powerboat office was pretty quiet. I was still processing what I had just experienced. I did ask Bill about how many times a year he did this. He said about 100 to 120 of those local ‘show and tells’, and in at least twenty different states. For me, that was another sobering thought. How could somebody as well-known as Bill be doing in person Atlas Van Lines commercials to audiences smaller than a kindergarten class.

As I got out of the car at the Powerboat office, Bill said, Well,. what do you think? How do you like what I really do for a living?” I now know what he meant. The life of a professional boat racer isn’t quite what I thought it was.
Reactions: Sharp Shooter, Dkahnjob, LAKEMAN and 2 others

Hours of boredom wrapped around seconds of excitement. But what excitement it was.
Great story, Not what I expected.
Bill was still a great boat racer, wish I could have attended one of those meeting, I would have had lots of questions.