To describe the vibe in Palm Beach for the Flag Day Trumptilla on June 14, I've got to go with the AC/DC banger "Thunderstruck" from my classic rock playlist; you know the one with Brian Johnson screeching at the top of his lungs. Seas, streets and the sun-drenched sky overhead had been thunderrrssstruuck – screaming TRUMPTOWN, USA. Patriots painted the place red, white and blue in honor of our modern-day Moses/fighting-Jedi President, Donald J. Trump turning 74 years young. 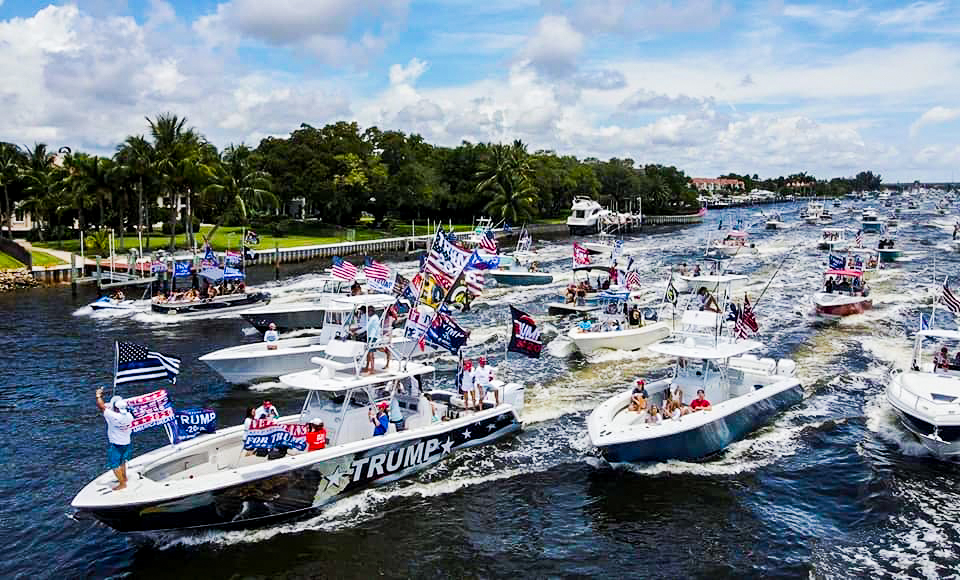 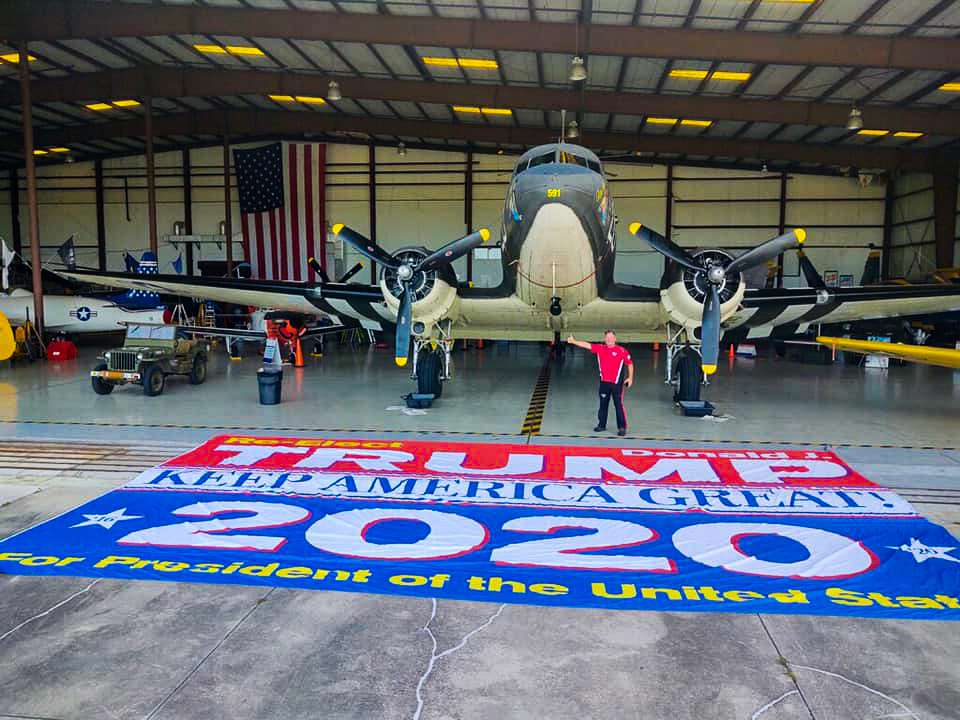 South Floridians were out in full force to celebrate the stable genius (as his base so likes to call him) who sacrifices a salary, sleep and the sumptuous lifestyle once led, all to fight for our freedom, liberty and right to cock a Glock. Gifted with five-dimensional chess playing skills and strategies, President Trump exudes wit, patience and persistence 24 hours a day dealing with the country's corrupt, radical anti-American political pukes; and like him or loathe him... no one can deny this man's love of country.

The boating community respects his devotion, and recognizes there will never be another POTUS capable of sparking an inspirational marine crusade of true American patriots like what we're experiencing week after week. DJT has a new Navy... and it's making wakes nationwide. Introduced in part one of the story, Carlos Gavidia is the gem of a guy to be honored for this great aWAKEning, lighting up the lakes and oceans with his organically orchestrated TRUMP trains of glory and grandeur.

For the YUGE Palm Beach presidential birthday bash edition, Gavidia literally took things to a higher level on Flag Day. At 11:30 a.m. eyeballs and iPhones faced the heavens to salute the Air Sports Parachute Team leaping from the WWII Warbird Tico Belle C47 and blanketing the perimeter of the Jupiter Lighthouse with super-sized 600-foot flags. The Donald's protective guardian angels also worked their magic on his special day, whirling a cluster of clouds together in the formation of a huge letter "T" peaking out of the sky, precisely as a police vessel was passing underneath. 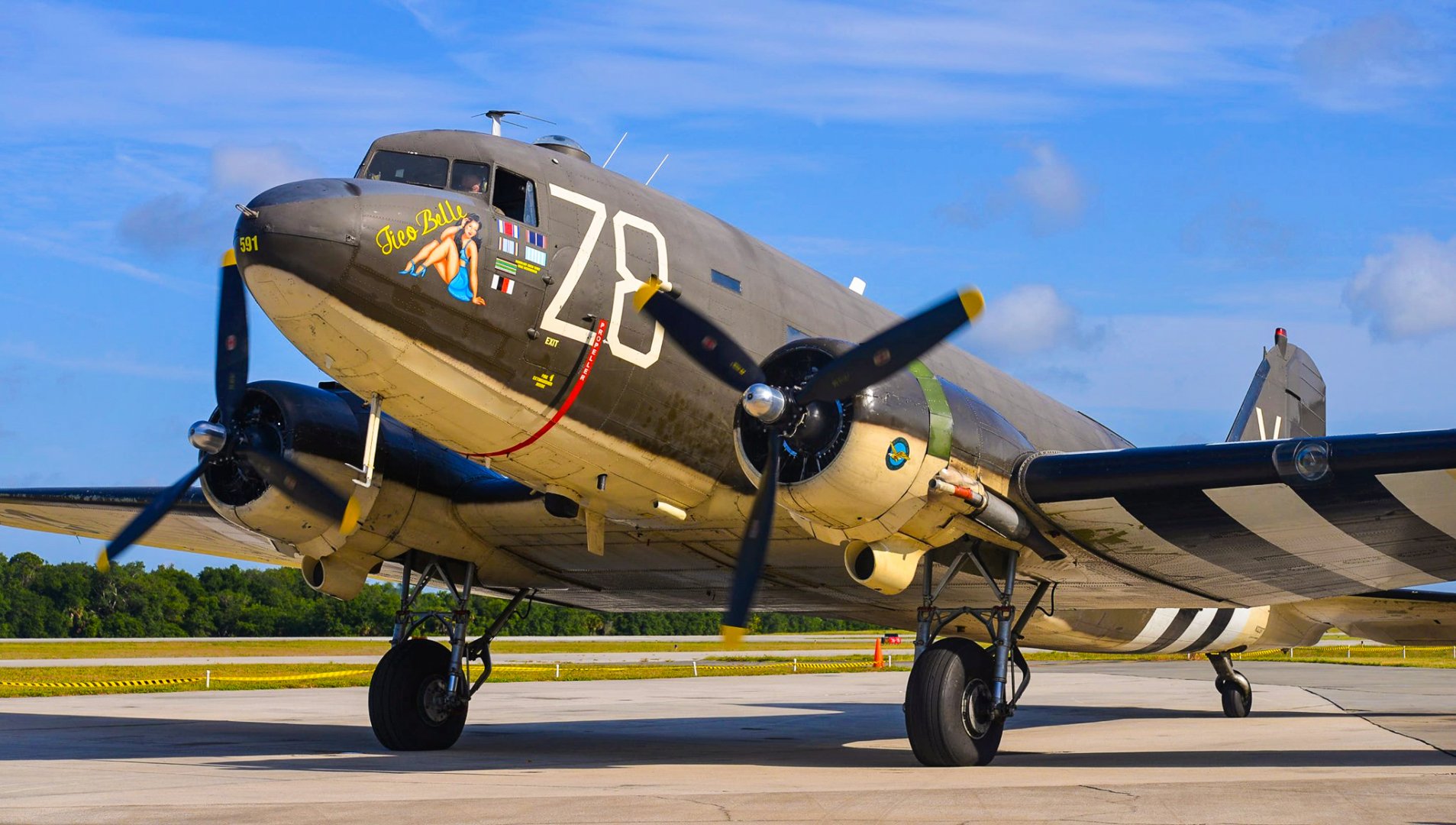 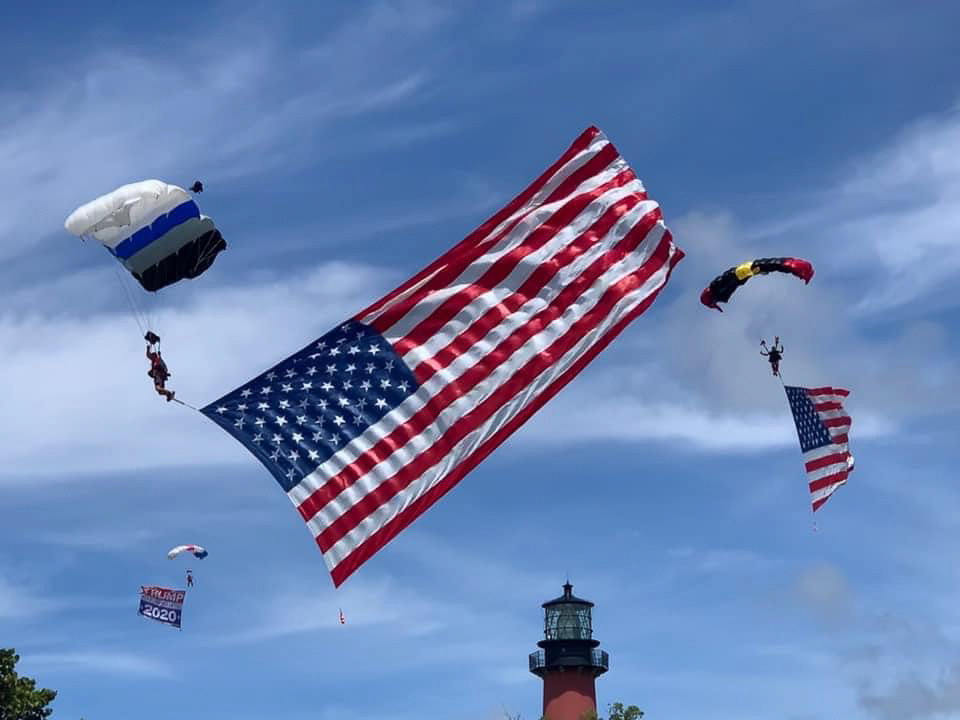 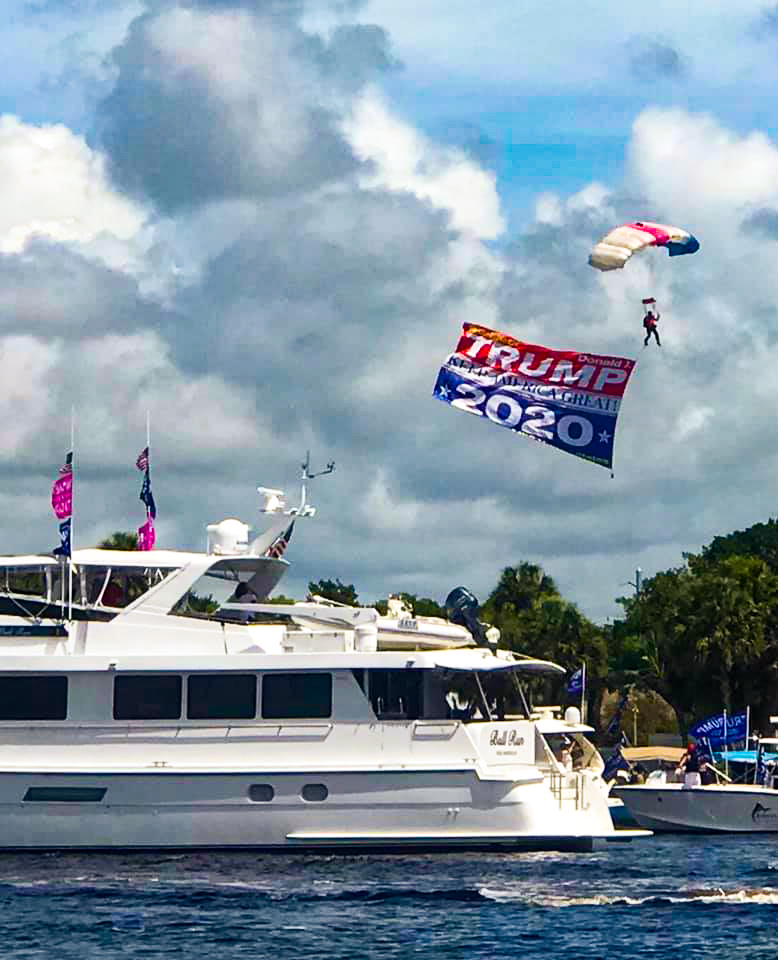 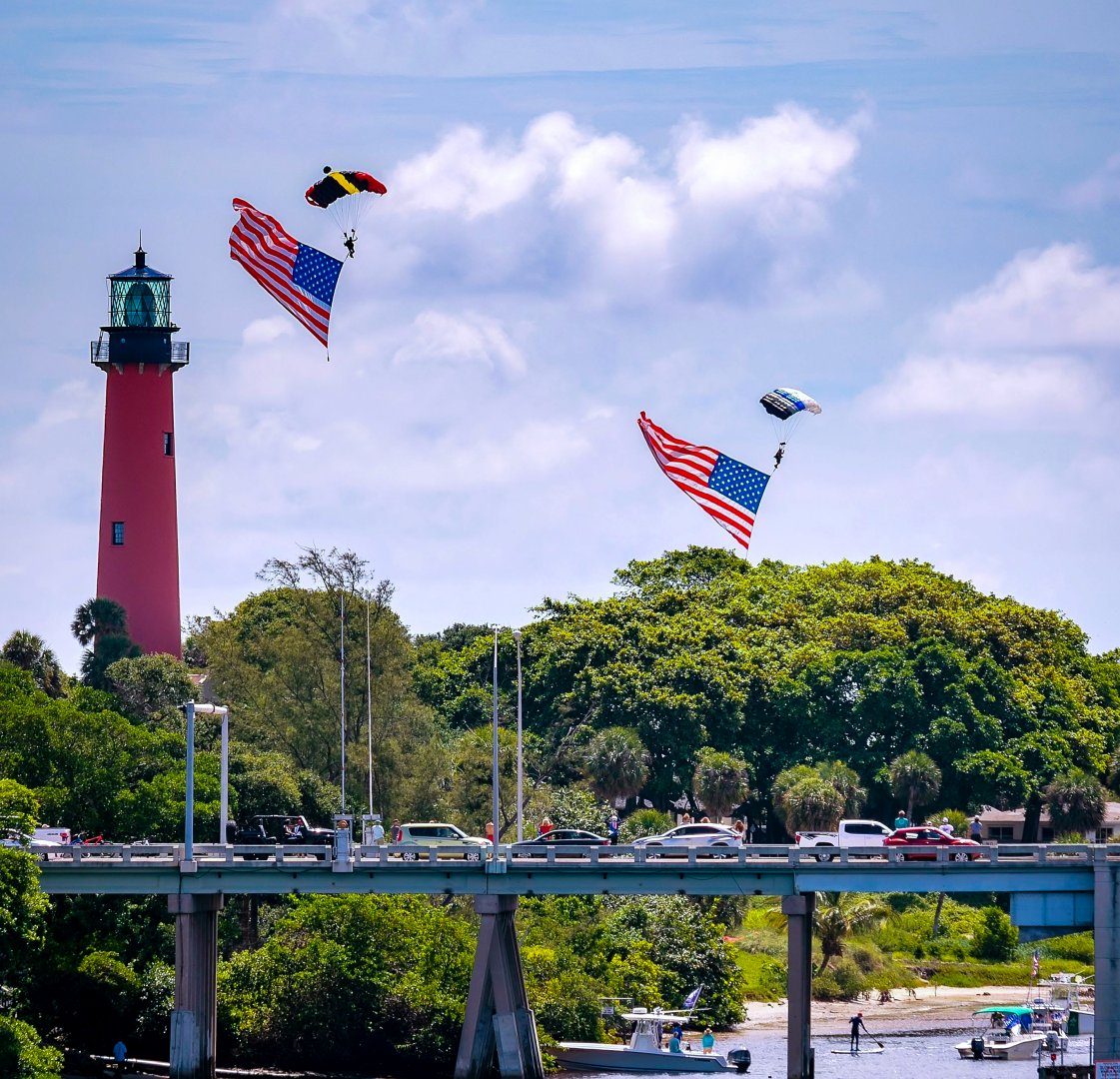 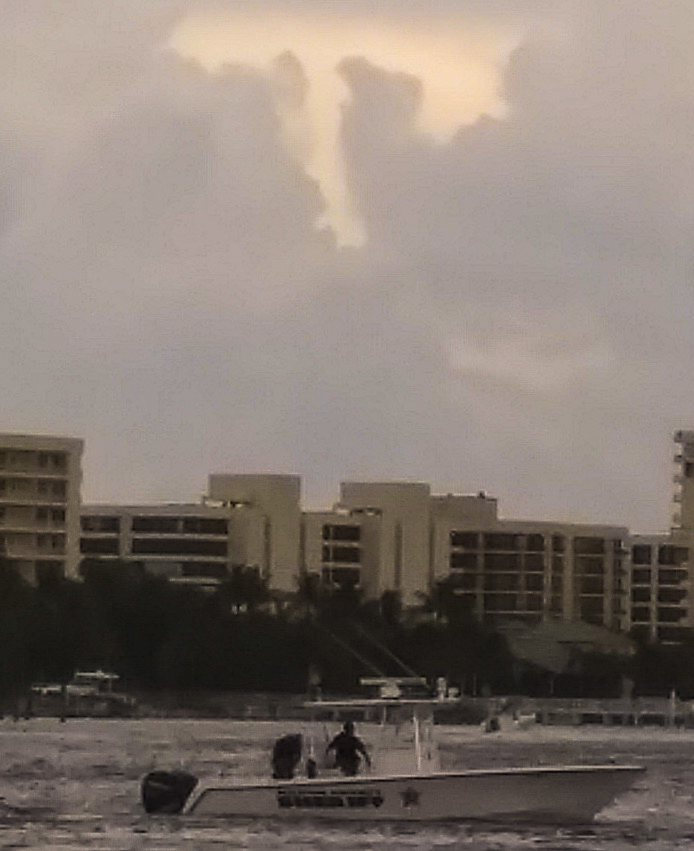 From the clouds to the crafts, soaking in the sights was mesmerizing. Decorated in ceremonial garb, each boat "out-trumped" the next, only to be rivaled by the liberty lovers on board decked out in their MAGA and Old Glory gear. It felt and looked like Trump-o-ween, and the time had arrived to go "Trump or treating" down the Intracoastal Waterwway (ICW). Weaving and bobbing in the shadowy chop, the "We The People" Navy set out behind Gavidia's 42-footer Invincible for the 8-mile long procession to the Southern Boulevard bridge beside the president's private Mar-a-Lago estate. Also called the winter White House, what people don't know thanks to the toxically inept and unethical string-puppet media's staged reporting is that our "racist" president was the first owner of Mar-a-Lago to welcome African Americans, Jewish members and gay couples; all were previously prohibited from joining. Spin that CNN! 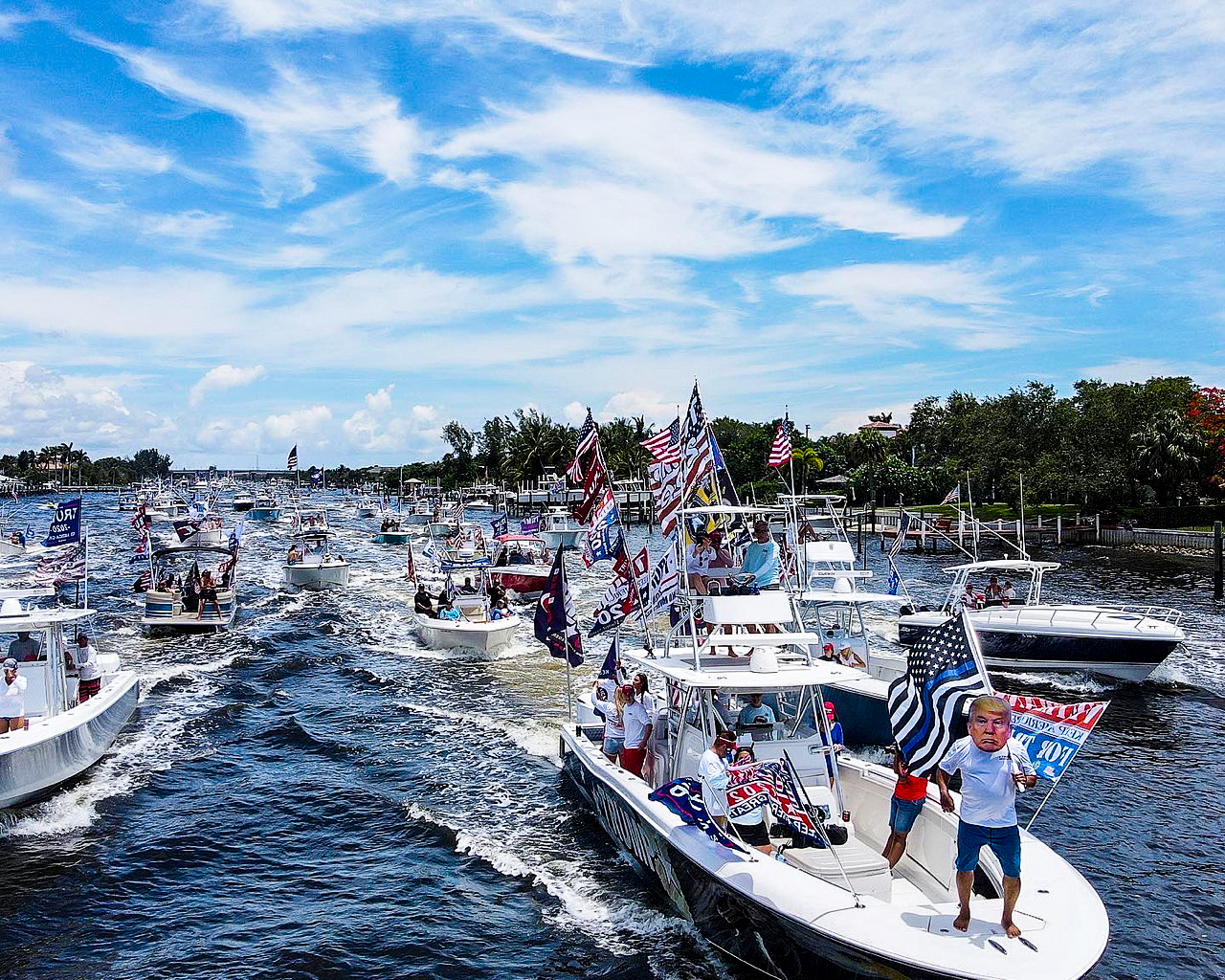 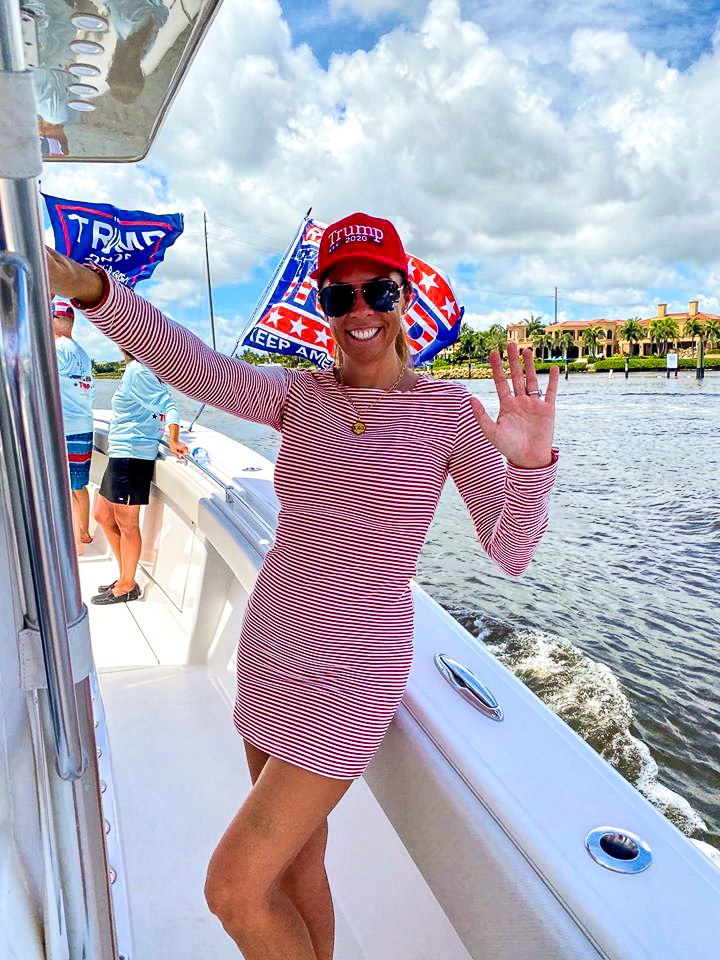 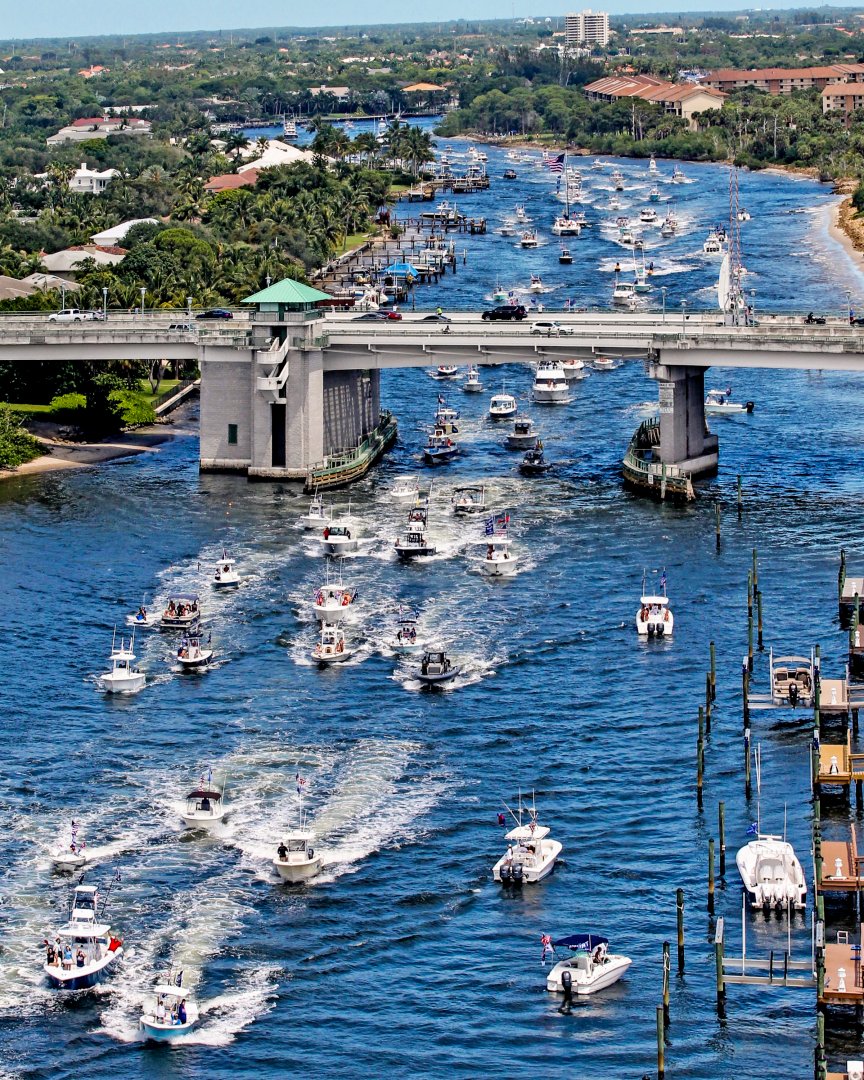 The trail of marine machinery that turned out included a taste of every brand and everything from: pontoons, runabouts, cruisers and fishing monstrosities to center consoles of all sizes, and let's not forget the luxury motoryachts. Adding another layer of awesomeness were the Jet-skiers who joined in on their personal watercrafts whooshing around the open pockets of splashing saltwater. 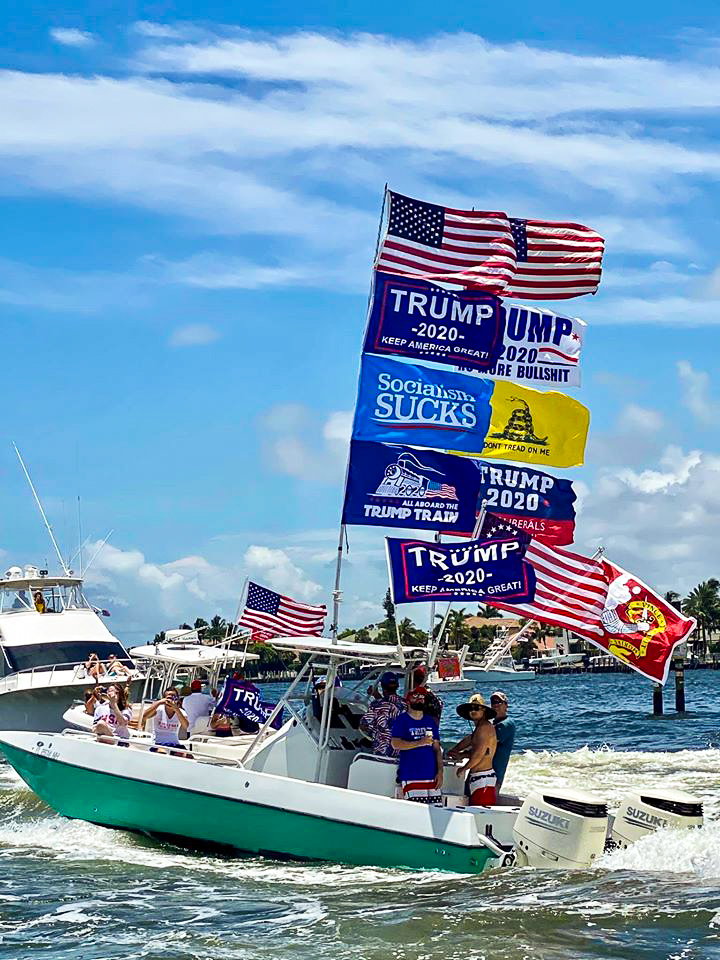 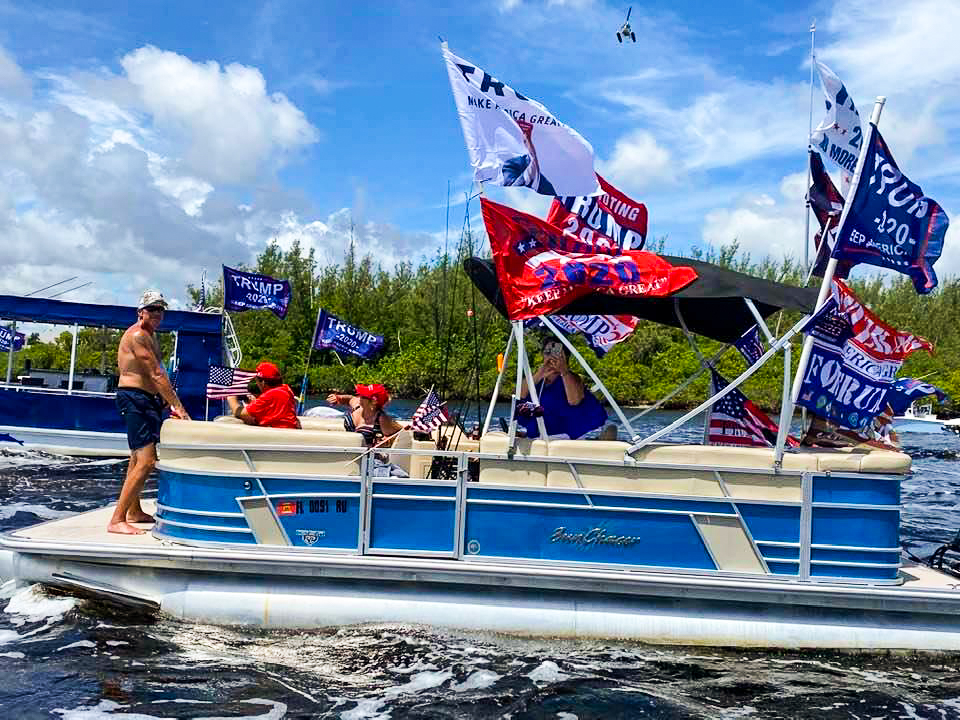 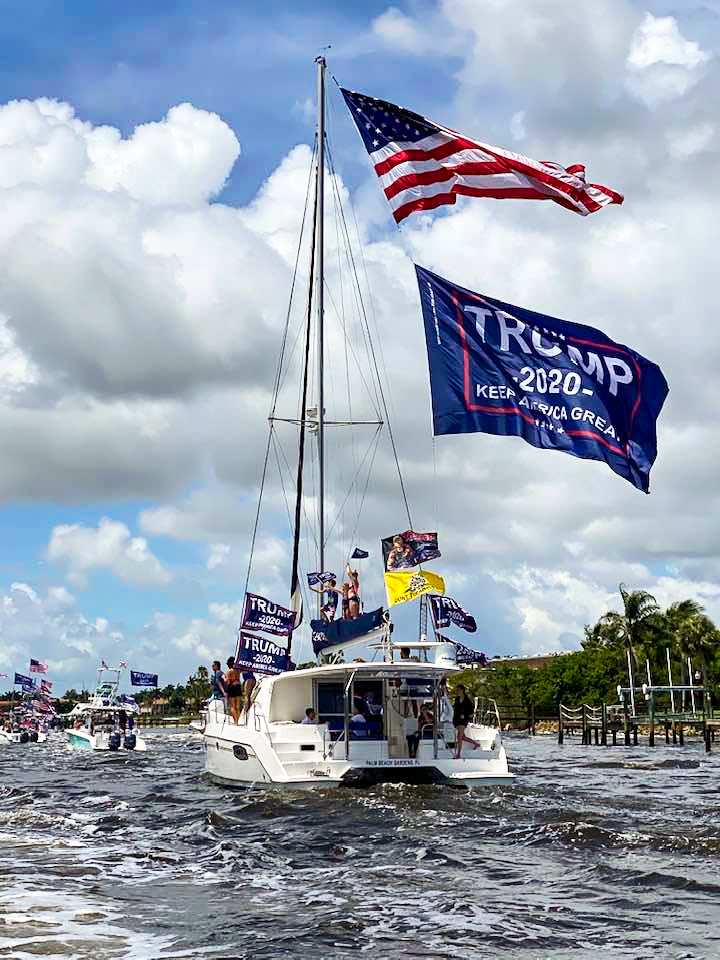 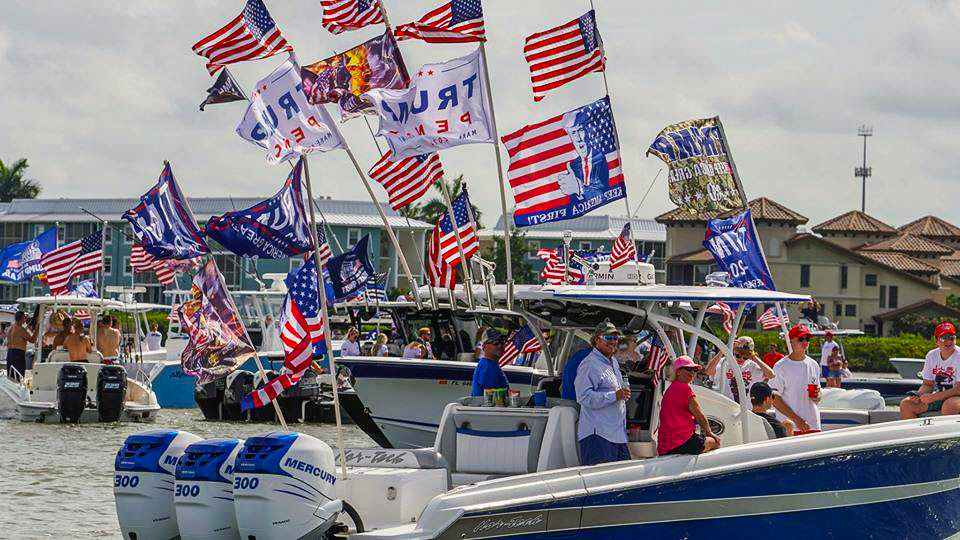 Even though from an optics standpoint, it looked like a maze of madness with the sheer volume of moving crafts clustered close enough to toss over a frosty White Claw; the mission went off incident-free except for one washed-up piece of hardware noted along the way. Ironically, the half-sunken protrusion was pimped out with race-hustler Creepy Joe Biden 2020 paraphernalia, and so, it will be no great loss when completely out of sight. Furthermore, it didn't seem likely that any amount of "fixed polls or poles" would be able to prop the hot-mess up from disappearing into oblivion. 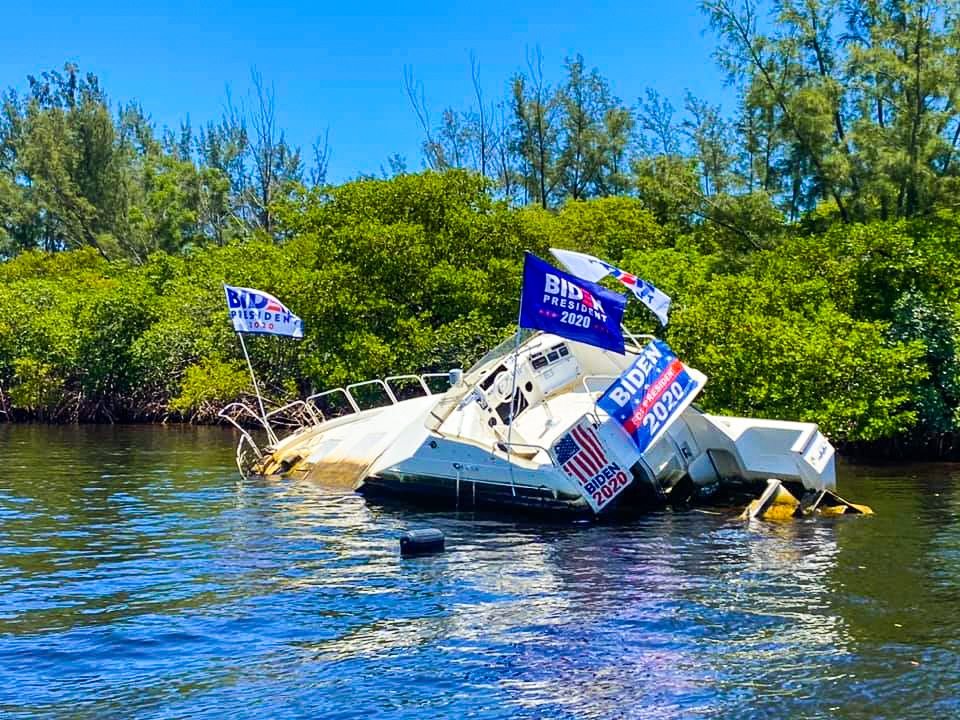 Once past the Hiden Biden barge, giggles about the wreck returned to genuine smiles and tears during the rest of the descent down the ICW, especially every time the all-boat choir of 6,000-plus belted out in unison singing the Greenwood classic "God Bless the USA". Captains were cued on VHF Channel 68 when to crank it, and judging from a few photos it appears the POTUS and first lady "popped-up" to sing along. 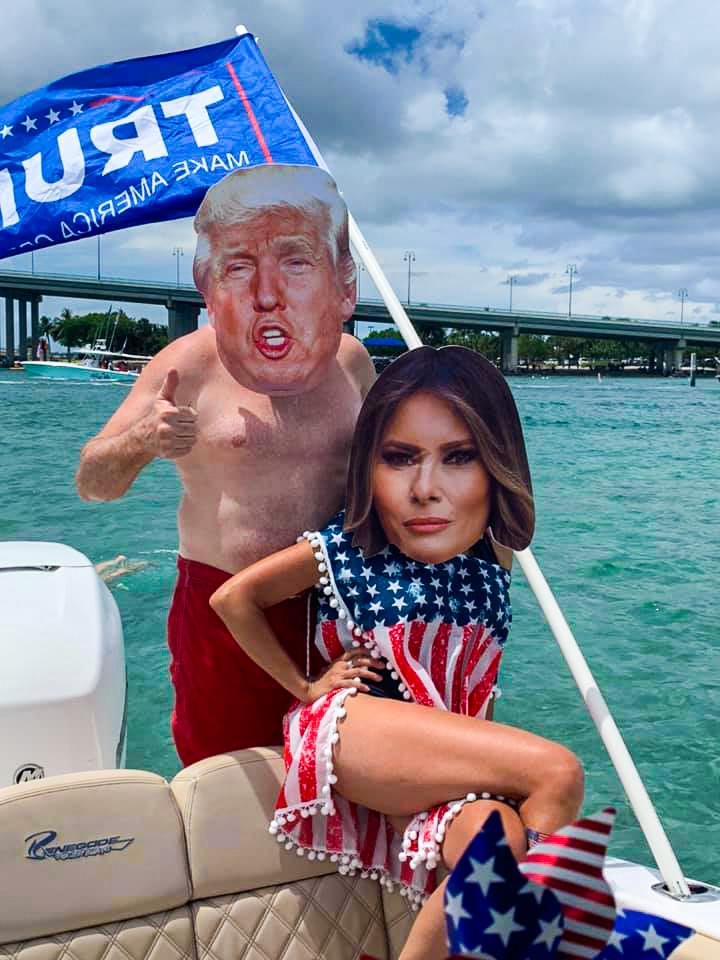 Off the Water​
After witnessing the strength and spirit of this coalition and such passion for the Republican head of our nation, surprisingly, the filth-spewing news core continues to label Florida as a swing state... yet the only swinging on this epoch-making, steamy storybook Sunday were Pro-Trump flags. The scene was the same among non-boaters. Waterfront residents decorated their docks and backyards as a surprise for the entourage idling by, not to mention the loads of loyalists who lined the bridges with their banners and big smiles.

Several local organizations came out to show support as well, including Pro-Trump activists Dale, Terri and Jason, the founders of WeTriumph2020.com, who had an area set up with their specially designed merchandise on the main bridge near Mar-a-Lago. The fact remains – Florida is redder than a Ferrari and it ain't flippin' in the next 100 days. 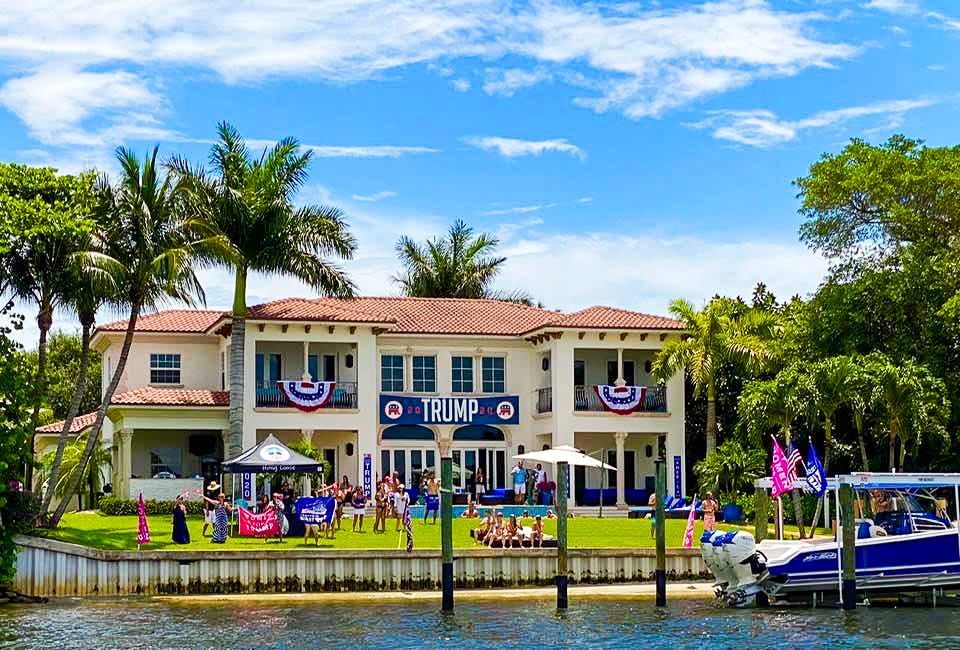 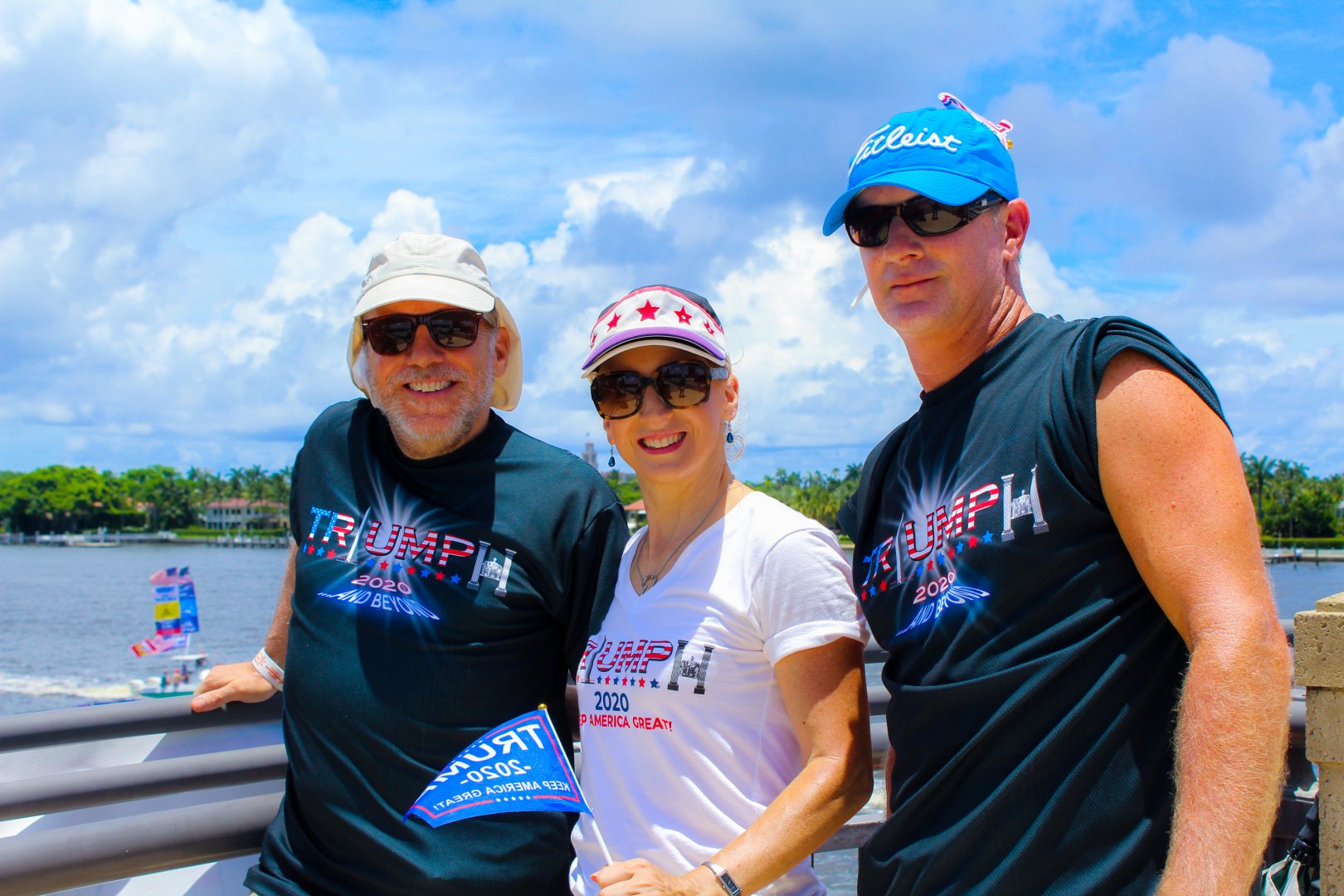 The big-hearted bikers and truckers fired up their toys too. As I said in the opening, the roadways were thunderstruck! Ruling the roost rumbling down Interstate 95 from Stuart, bikers actually joined forces with the truckers before kickstands were dropped for the after party at Palm Beach Harley Davidson. Truckers, on the other hand, launched their road rally in the Lake Park region before hitting the highways and hotspots around area code 561! All over Florida events were happening; elders residing further north in The Villages even charged up their E-Z-GOs and Club Cars before burning some rubber retiree-style in their very own golf cart parade. 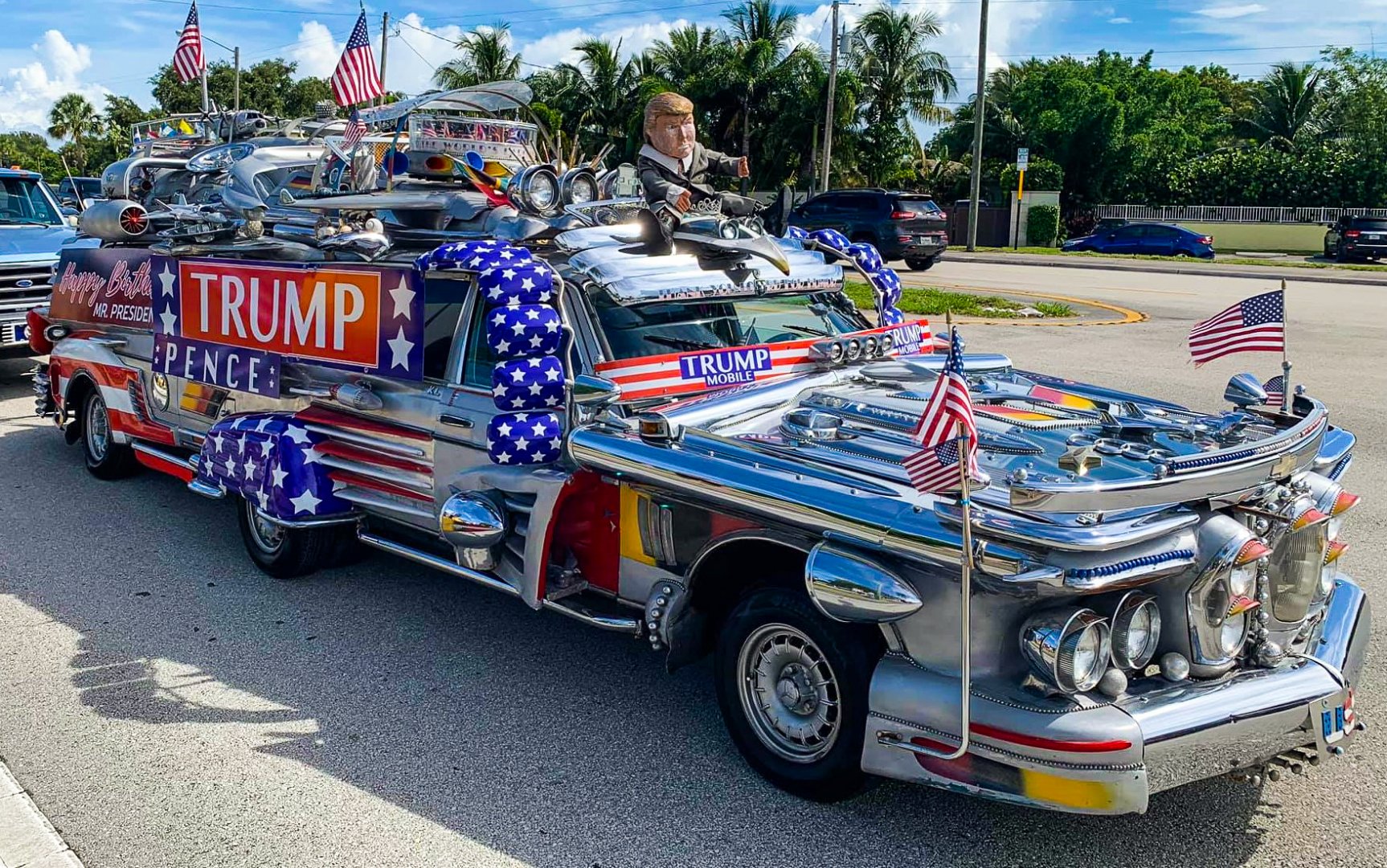 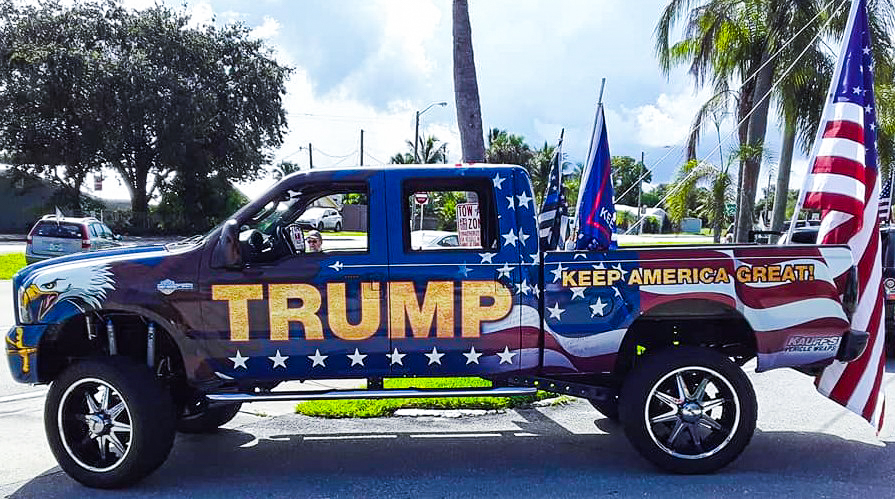 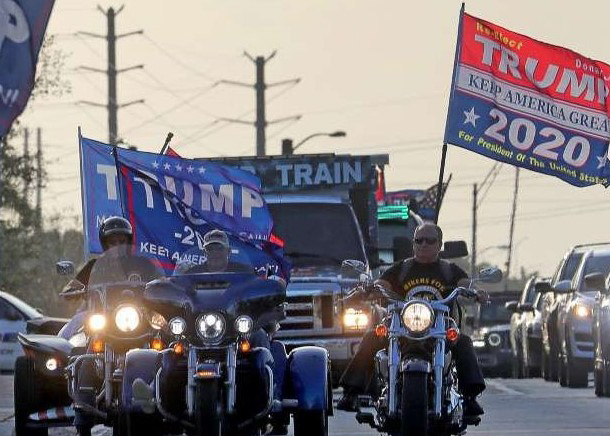 Before and After the Trumptilla​
The captain's party at the Blue Point Bar and Grille on the evening prior to the Trumptilla made its own headlines. First off, American artistic designer Tommy Zegan was center stage for the initial public unveiling of his one-of-a-kind "Trump and his Magic Wand" stainless steel sculpture. The 485-pound caricature standing 6 feet 3 inches tall and valued at $30 million dollars (yes you read right, art is priceless remember) will be presented to the president in November, and then permanently displayed in the Trump Presidential Library. 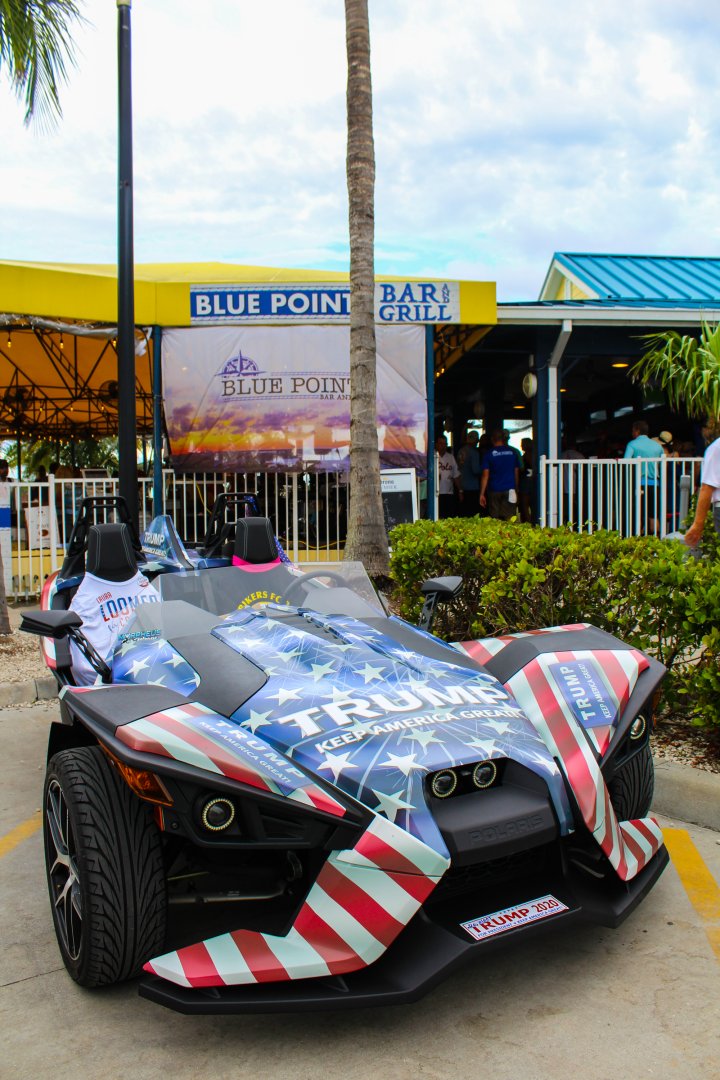 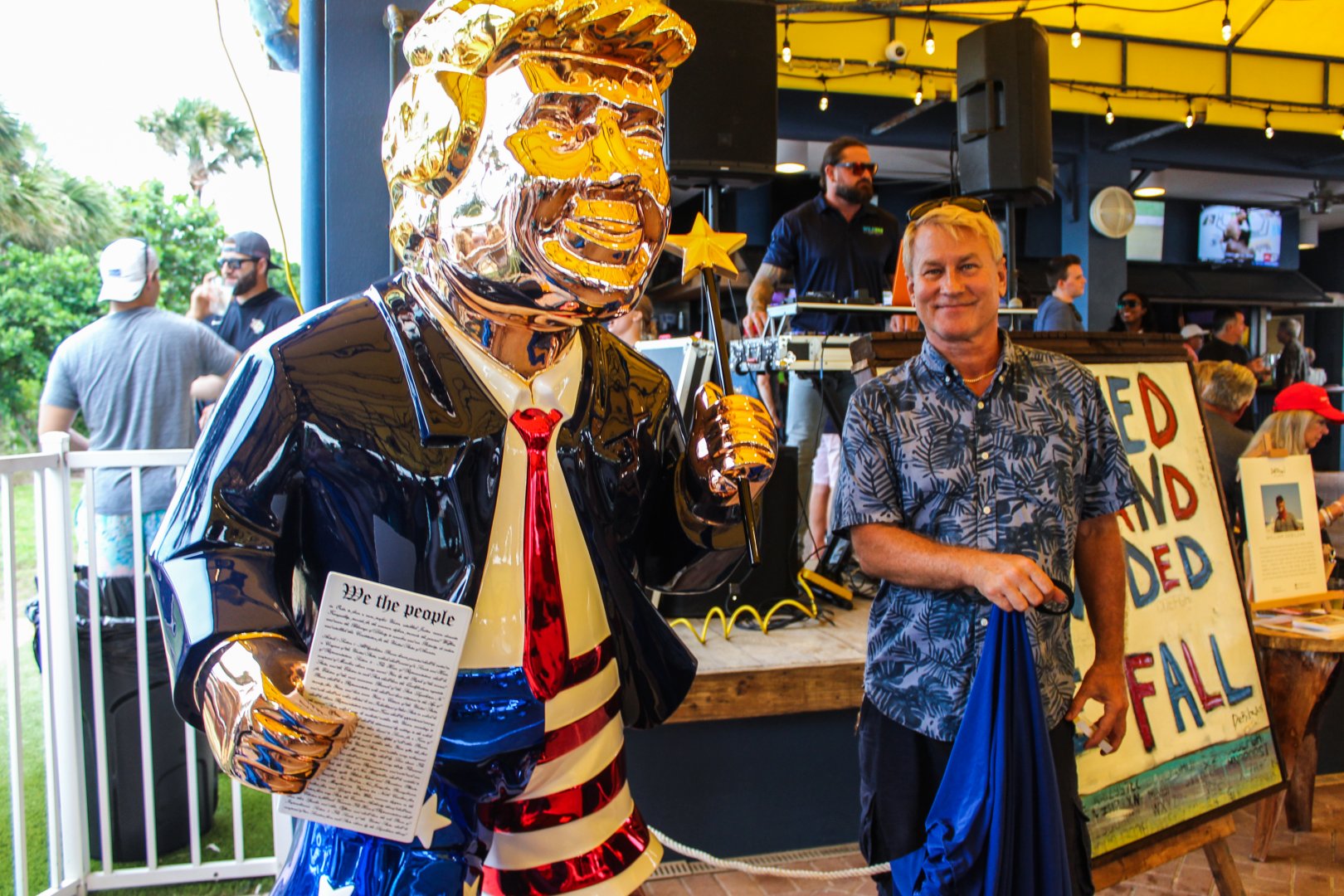 Chatting with Zegan, he filled me in on the current raffle campaign and explained about the past exchange of words that prompted the sculpture's naming. Our man of steel, President Trump is holding a copy of the U.S. Constitution and magic wand in reference to Obama's condescendingly snide remark about bringing jobs back home when he asked, "What magic wand do you have?" A raffle has been established at DonaldTrumpRaffle.com and donations will go toward the Trump2020 campaign and the Disabled Veterans Fund. The lucky golden-ticket winner will receive accommodation and round trip airfare for two to Washington D.C. to present the sculpture to the president, and also take home a 6'3" fiberglass replica of the piece. 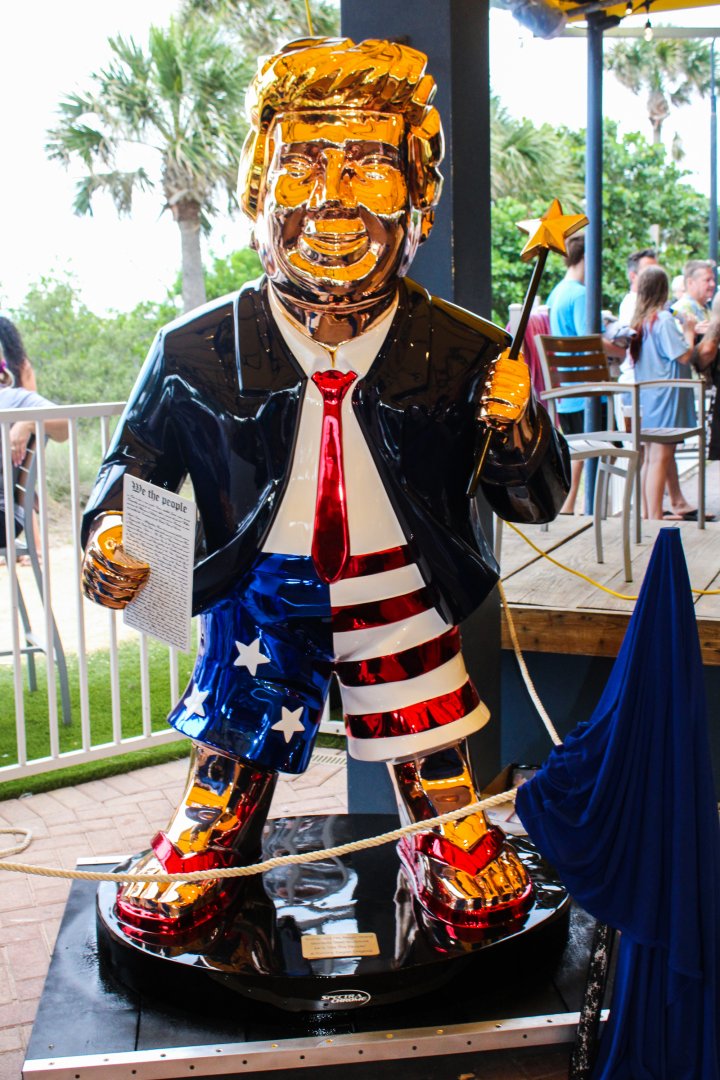 Apart from the art, there was more to ogle over. Ocean Blue Graphics joined the jamboree with a table full of the official TRUMP boat clothing items for purchase, but that wasn't all. Red MAGA hat faithfuls were in for a treat and change of colors. Christi Mahfauz, the official merchandise distributor for the Make America Great Again Committee, made a surprise appearance presenting everyone with special addition gold-stitched KEEP AMERICA GREAT white and blue caps embroidered with Boaters for Trump on the back, as well as, red and blue Trump/Pence 2020 flags for the boats. To top off the weekend, John Pence, the nephew of Vice President Mike Pence, his wife and their campaign staff joined the weekend affair.

But the vice president's family members were not the only out-of-towners; crusaders came in from all over the place. Take Shawn Thomas Henning for example, he happens to be an airplane pilot who flew down with a buddy from Ohio. What's even cooler, Henning is a fast-boat guy and moderates a Cigarette Racing Instagram page back up in Ohio. Other participants trailed their boats down from the Carolinas, after having met the Gavidia family last month when they brought the center console up to the Charleston Trumptilla. 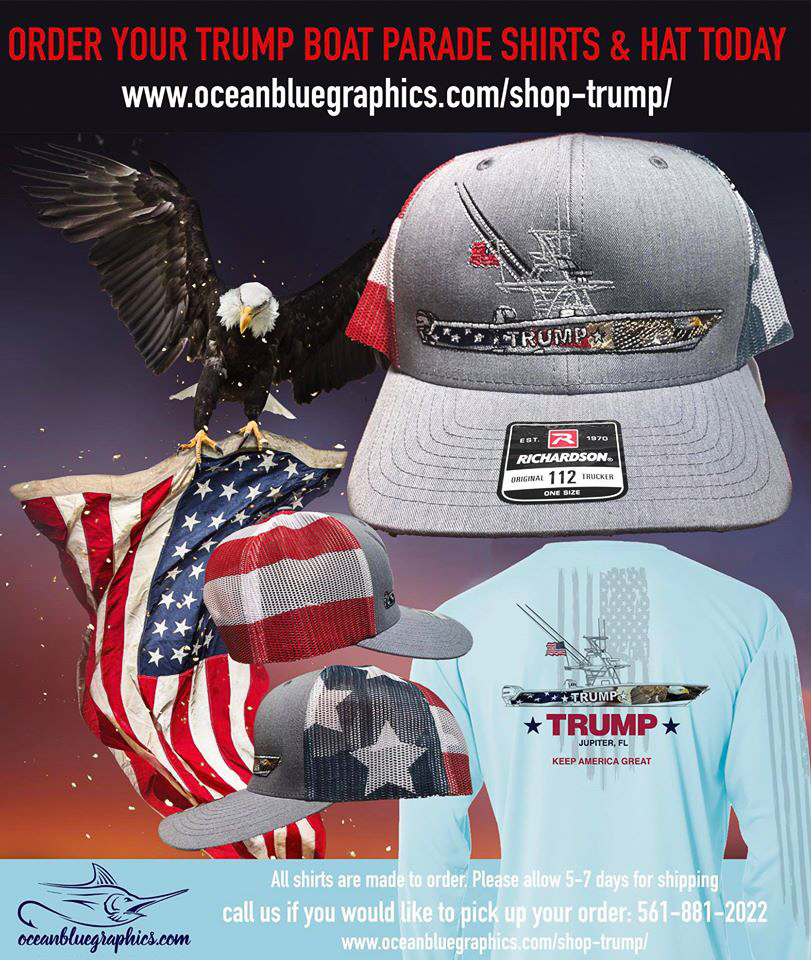 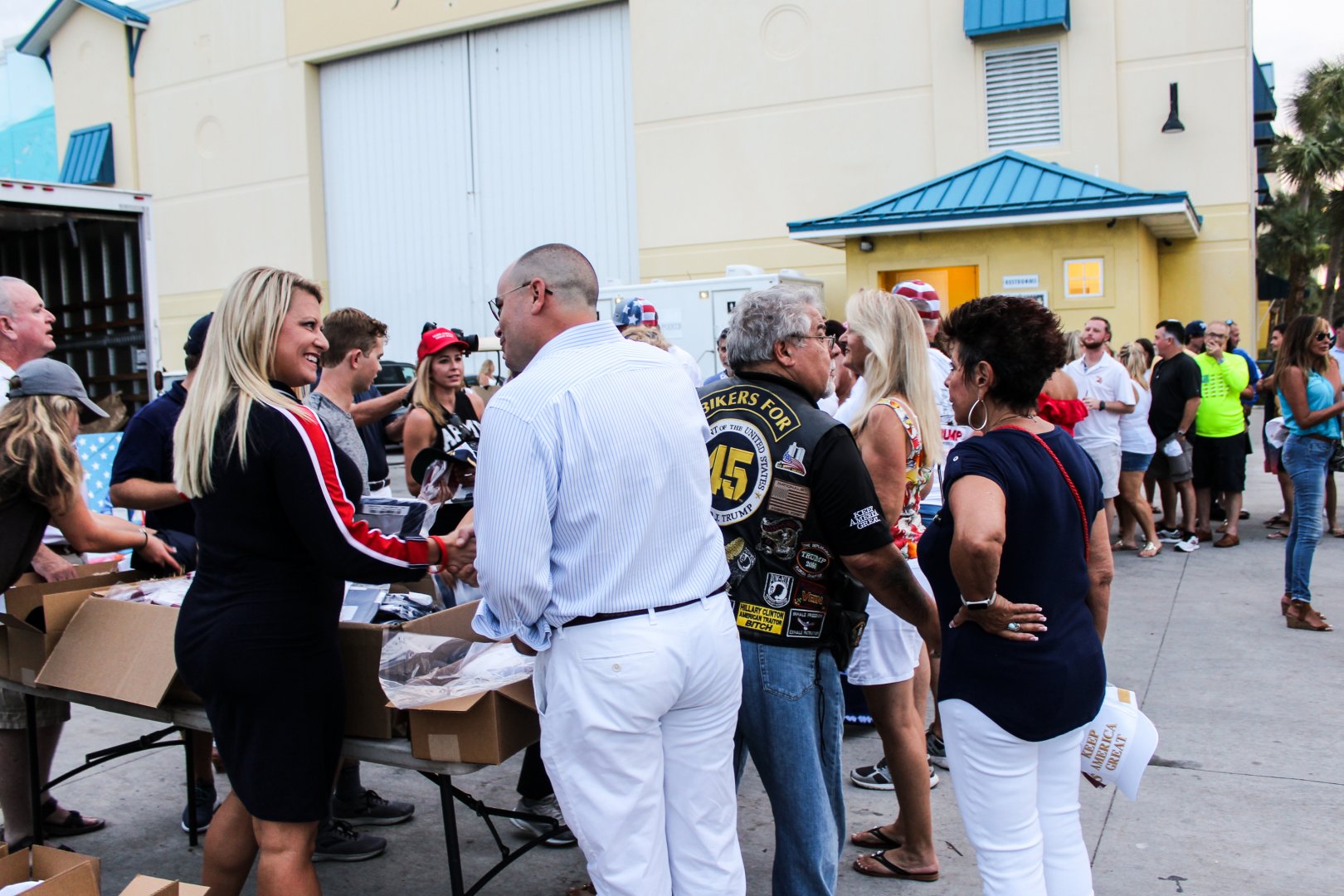 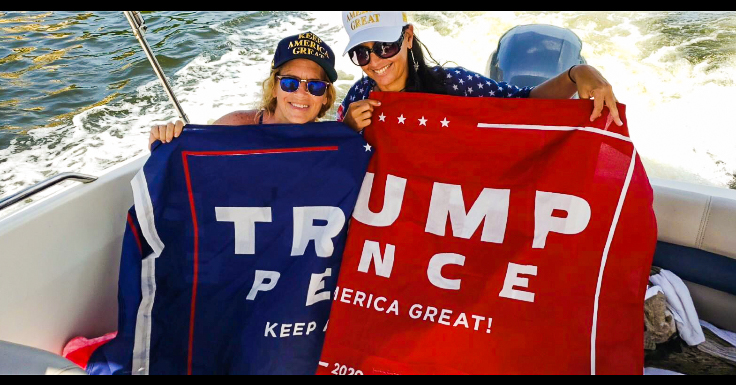 "4 More Years"​
The official TRUMP boat has become a hot item around the nation, and its recognition has been growing far beyond the Boaters for Trump movement. Just recently it was featured in a Pro-Trump rap music video. Forgiato Blow is the grandson of Stuart Arnold, founder of the Auto Trader publishing empire for vehicle classified ads; he's also dubbed the Donald Trump of rap and Donald Trump's nephew thanks to his unrelenting support for No.45. When the rapper's music team reached out to Gavidia, he couldn't refuse letting them use it to film a video for Forgiato's latest hit single "4 More Years" featuring country-meets-hip-hop fusion singer, Colt Ford.

Going one step further, Gavidia also allowed video footage to be filmed at his dynamite Jupiter residence, which no doubt triggered a few major meltdowns from the neighborhood sheeple who went spastic over his TRUMP boat wrap. At least during the shooting, the mask-obsessed, mind-controlled minions had a few hours downtime from their pancake syrup labeling problems and plots to annihilate the National Anthem from NASCAR. 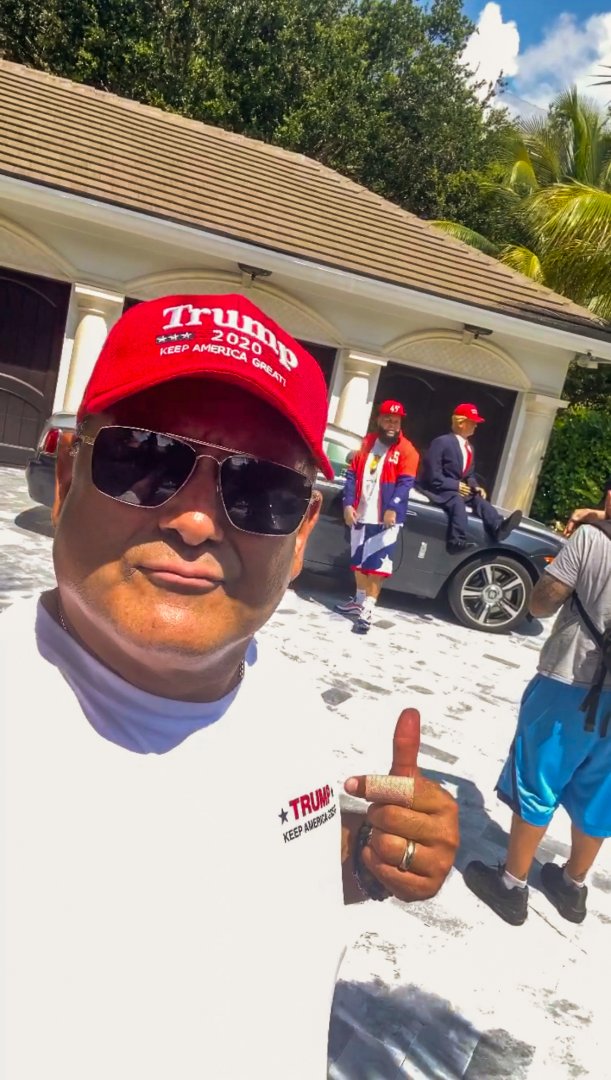 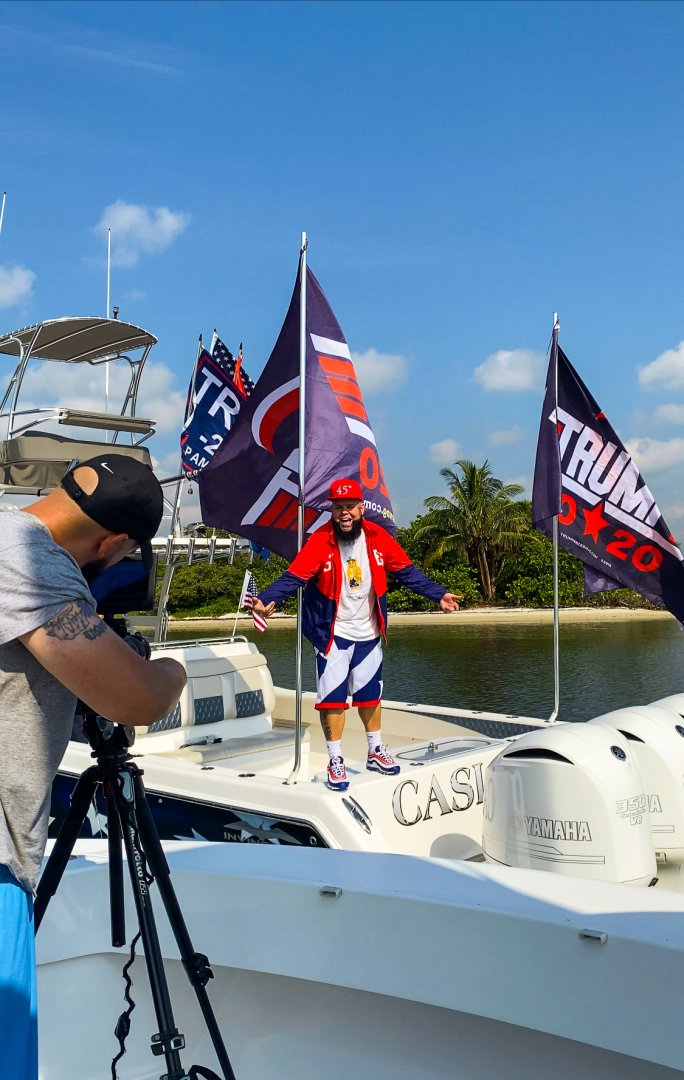 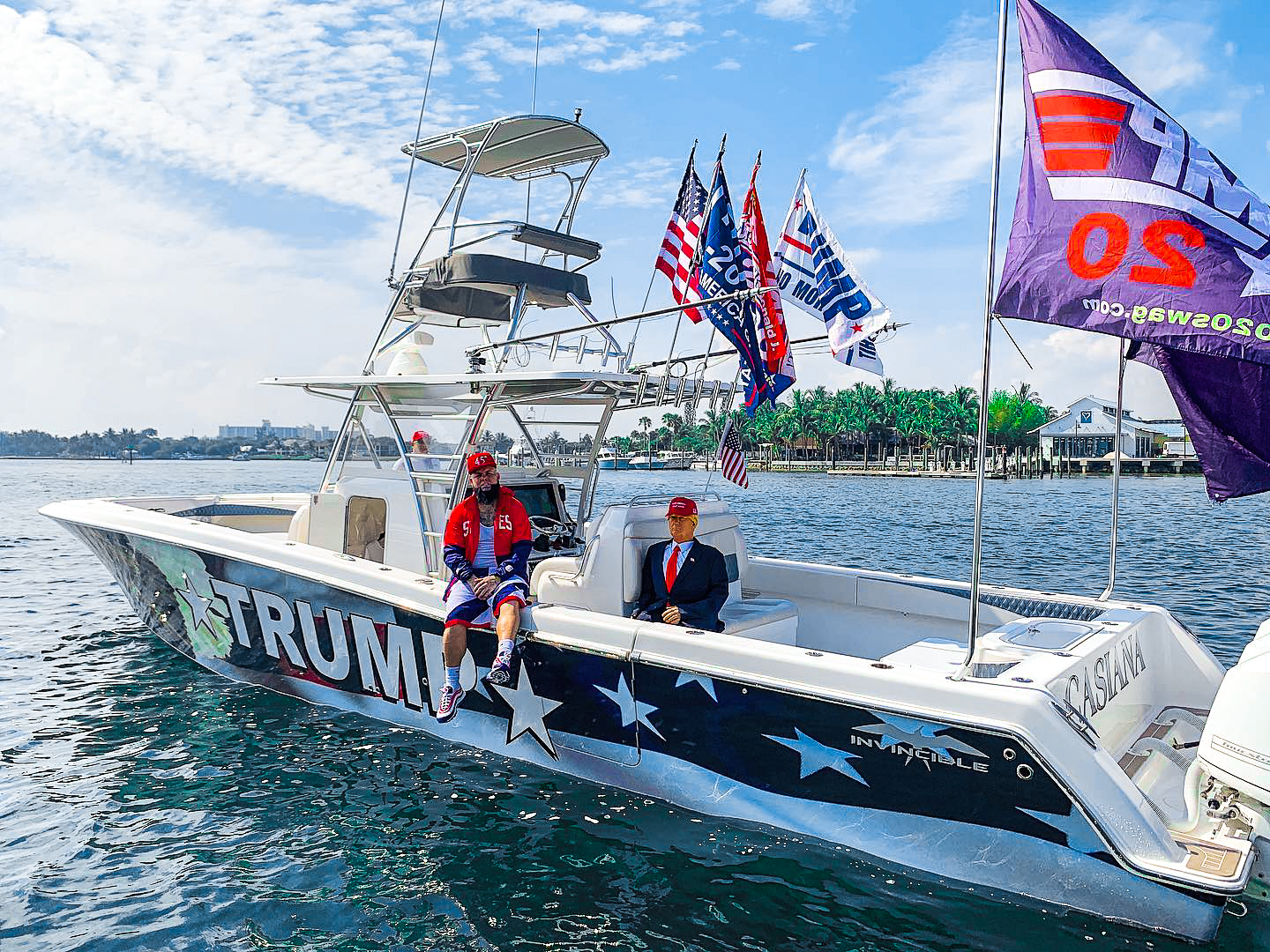 Forgiato and Colt's song calls for four more years, but this is not just a four year election. This is about the future of our country infiltrated with Renegade-appointed lunatic luciferians idolizing criminals and demonizing cops. We are one percent away from being lost forever. If you don't want Sharia-style Mogadishu drive-by machines mounted with 12.5 mm HMG patrolling our communistic totalitarian streets, and rainbows and unicorns replacing the Stars and Stripes, vote like your life, and liberty to lock and load depend on it November 3. KAG 2Q2Q!

And back to the boats we go! Next up, look for a complete report on Nor-Tech's first ever Bahia Mar Fort Lauderdale Demo Day.