Article Gallery
If you are a frequent visitor to riverdavesplace.com you most assuredly see the terms “cavitation”, “ventilation” and “blow-out” used by inmates when discussing and describing something that has to do with propellers and a lack of anticipated performance. Way too often, however, these terms are used interchangeably when in fact they are three distinctively different conditions.

Let’s start with “cavitation”. Most boaters mistakenly use this term to describe anything that has to do with propeller slippage or having noticeably less efficient thrust. Actually, “cavitation” has a much more precise definition. Propellers are inherently designed to lower water pressure while spinning to generate thrust and propulsion. And in some cases, a resulting rapid change in water pressure along the blades of a propeller can cause the water to actually boil, creating thousands of tiny air bubbles that burst on the surface of a propeller blade. This is likely to cause damage in the form of small pits or burns on the blade surface as performance efficiency correspondingly decreases. If left unchecked, the integrity of the propeller may eventually become compromised to the point of failure. 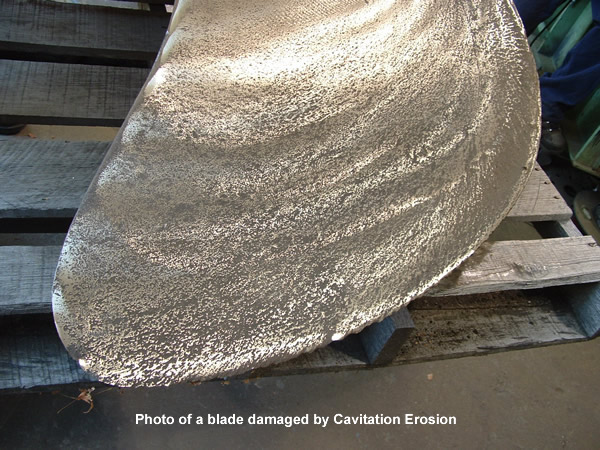 A lot of things can cause “cavitation, among them minor blade damage in the form of dings or nicks, and in some cases the actual design or configuration of the propeller itself can be the cause. If a propeller is experiencing “cavitation” there is usually a corresponding vibration which is quite noticeable when driving at speed. Not all “cavitation” is the same, however, as it can be broken into at least a half dozen subcategories, but that’s best left to graduate engineering or physics students to ponder. If there is visual evidence of “cavitation” on the propeller, all imperfections should be repaired or perhaps it’s time for a different style of propeller.

The next on the list is “ventilation”, something very often mistaken for “cavitation”. Propeller “ventilation” is much more common among boats than “cavitation” in general. “Ventilation” occurs as the result of air or exhaust gases being pulled into the propeller blades. It happens frequently when trying to put the boat on-plane from an idle speed or making a hard, sharp turn at speed. The intrusion of air or gases into the blades makes the propeller slip or lose thrust/efficiency and engine rpms immediately rise while forward speed decreases.

Most commonly, “ventilation” occurs when propeller blades are too close to the surface of the water. Common fixes for this problem are lowering the propshaft deeper in to the water, adding a slight cup to the trailing blade edges, using a less positive drive unit trim angle, or (as often suggested by RDP inmates) – “did you try a different propeller?” Actually, many propeller “ventilation” issues can be solved with a different style of propeller or a propeller with more blades.

Moving on, the next issue is “blow-out”. Although you frequently hear boaters complain about their propeller “blowing-out”, that’s seldom if ever the case. Instead, it’s actually “ventilation” that’s occurring, or in more unique cases “cavitation may be the problem. However, “blow-out” is real, but it’s a more complicated condition that involves a number of factors directly related to the shape and length of a lower unit gearcase and the style of propeller being used. 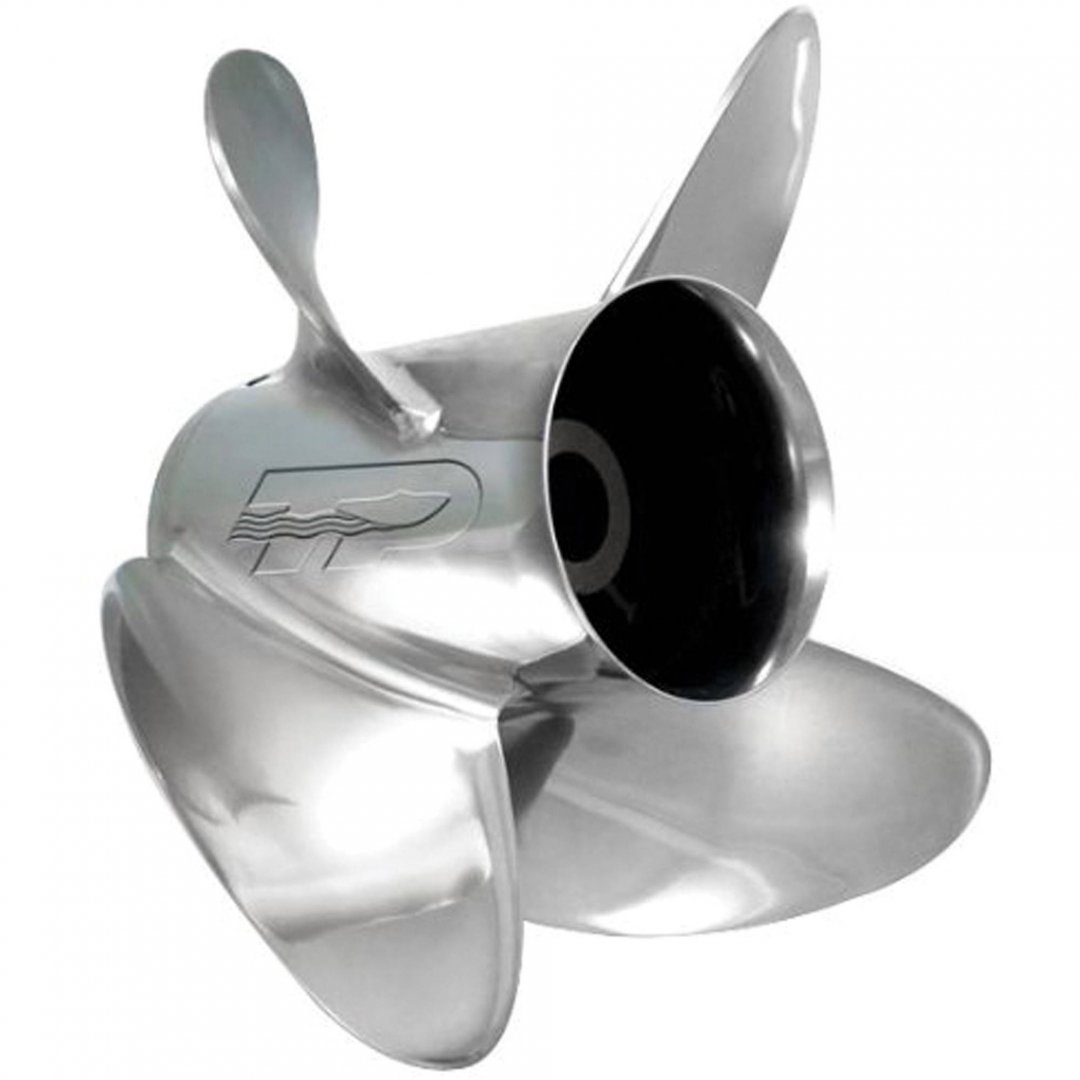 As the lower unit gearcase of an outboard or stern drive (with underwater thru prop hub exhaust) passes through the water at high speed (usually 75 mph or more ), the water passing by the gearcase will eventually reach a velocity where it no longer is able to follow the exterior shape of the lower unit. When that occurs, the relatively clean (undisturbed) water supply to the propeller is interrupted and a low pressure area on the side of the gearcase begins to form. Eventually, as speed increases, gases from the underwater exhaust outlet begin to migrate forward along the side of the gearcase starving the propeller for clean water to bite. When this occurs, engine rpms rev wildly, causing boat speed to dramatically decrease in an instant, and worst of all, significant steering control is lost. And, it will happen without warning.

Over the years, both outboard and stern drive manufacturers have become aware that earlier model gearcase designs were limited in their ability to deliver high performance speeds. The solution was to design better gearcase configurations more compatible with high speed operation. Prior to those upgrades, some boaters would resort to adding nose cone extensions to stock gearcases in order to raise “blow-out” speed limitations. In some cases, band-aid add-on fixes were effective, and in others not so much. Still, as good as modern gearcases are, it’s still good to be aware of the limiting factors in play.
. 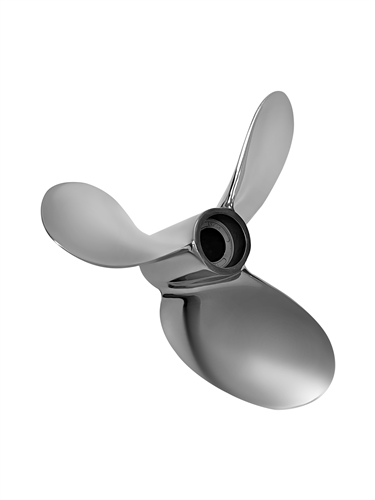 First, know that over-the-hub exhaust propellers (cleavers and chopper types) are generally more susceptible to causing “blow-out” compared to thru-the-hub exhaust style props. If you’re committed to running an over-the-hub type of prop, you could try adding a hub-collar to help it react a little more like a thru-hub.

Secondly, be aware that a spinning prop generates a certain amount of torque (a pulling to one side or the other while trying to drive in a straight line), and in order to keep the boat headed in a straight direction, a small amount of steering offset is needed. This means that the gearcase is not at a one-hundred percent straight angle in relation to the keel, but rather turned ever-so-slightly to counteract propeller torque. This in turn loads the gearcase on one side more than the other. This miniscule imbalance sometimes is just enough to bring on high speed “blow-out” when you least expect it. Remember, the more evenly that a gearcase can be loaded, the better it will pass through the water.

And last, trim angle also plays a key role in this high performance equation. If your boat achieves its best top speed with the gearcase trimmed fully out or near its maximum range, maybe it’s time to re-evaluate a couple of factors like weight distribution, propeller type and possibly check your hull bottom for an excessive hook. Driving a boat at a max trim angle will contribute to “blow-out”, a situation you will not want to experience. Remember, the closer you can get to a zero/neutral drive trim angle the more efficient and faster your boat will be.

As previously mentioned, today’s gearcase configurations have improved significantly in the past couple of decades. If you were to compare a gearcase profile of today with that of twenty years ago, the difference would be noticeable. Bottom-line, a little knowledge and the correct use of these terms in describing what you are experiencing with your own boat will be helpful in finding a solution to a better performing boat.
Reactions: throttle, GETBOATS and REXCRAFT1