This is pretty big peeps and will effect the food supply chain. Produce etc and people who live there believe it was intentional.

Button down the hatches a little tighter. 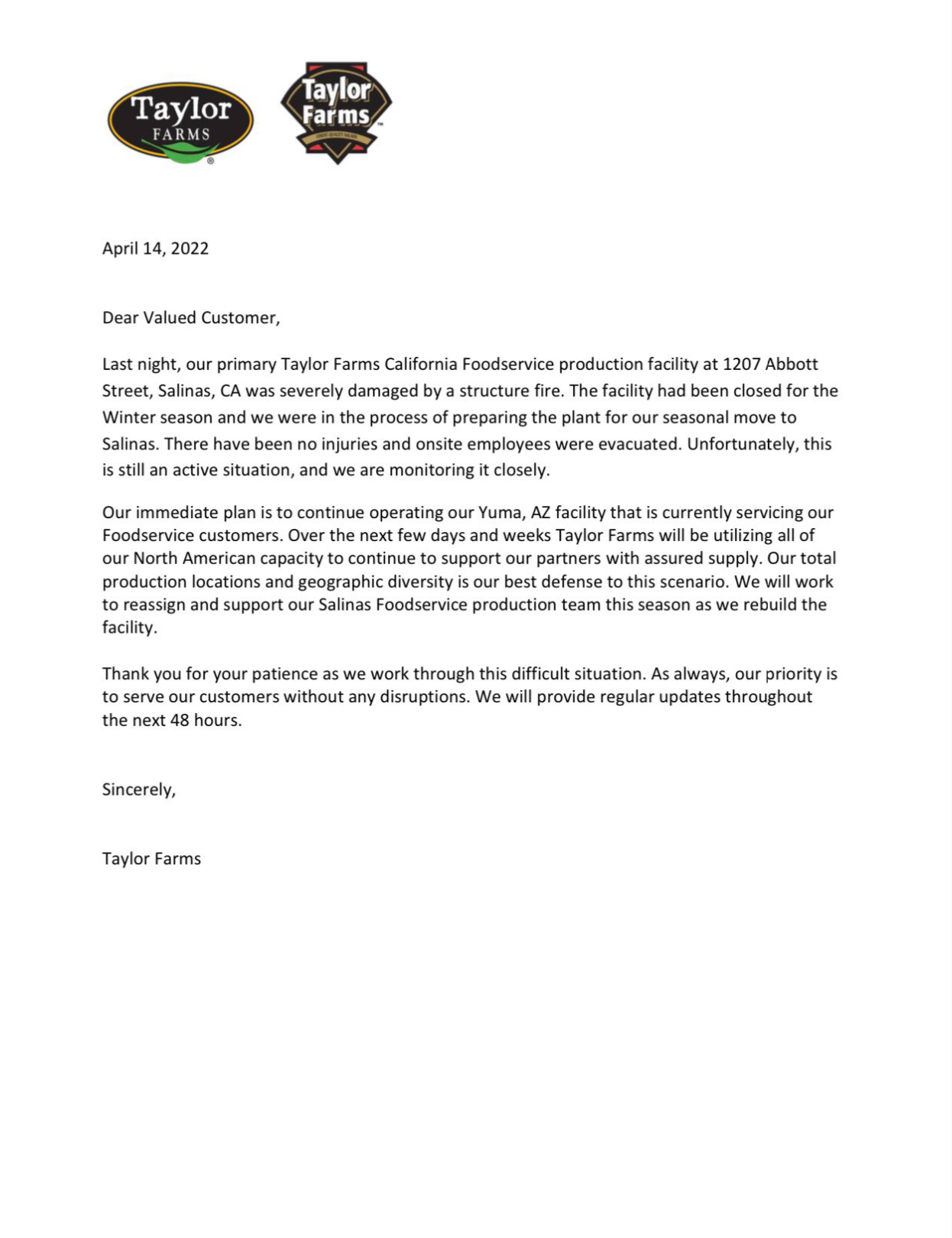 I'm sure there was zero video footage either.

Crazy that a facility that big is seasonal. I wonder if it is more of a supply hub/storage place vs. product processing.

t&y said:
Crazy that a facility that big is seasonal. I wonder if it is more of a supply hub/storage place vs. product processing.
Click to expand...

It depends on what they grow and where they grow. 98% of lettuce in this country come from Yuma during the winter then to hot to in summer. Process close to the farms.

Yep. “They” are going to try to starve us into compliance of their orders

Then you have this shit going on. China is going to apply max pressure on us while we are weak. They dont care if they have to starve to death 50m of their own people

Wow: Shanghai’s backlog of ships is quite literally off the chart, even compared to the disturbances last year. US and global supply chains are about to go from “severely strained” to “completely broken.” Need it? Buy it now. And buckle up… #SupplyChain #china

Then you have the bird flu killing 25m chickens and turkeys.

WTF is going on…

DILLIGAF said:
WTF is going on…

Going straight to hell but...
China Buffet anyone?


Listening to Coast to Coast Wednesday on the way out to the river, the interview was a guy researching food, climate and geopolitics. Interesting, yet chilling. He spoke of the solar activity actually causing cooling in some places, heating in others. This will effect the crops, and has in the past. He went on to state how the railroads are being forced to limit transport of already limited fertilizer and such. He also touched on the avian flues effecting food, and processing issues like these fires.

He was in the thought that the world governments know about the natural issues we're facing, but are using that and their own powers to bring things to the lowest point. The vax ID's failed, but most will comply to eat or feed their kids.
It may be full tinfoil, but what if it isn't? It's a perfect storm, but nothing is ever "perfect".

Yep.....every thing you posted I have been hearing for a while now.

One way or another.....at the cost of many lives.....they (whoever they are) are going to keep pushing until they get control.
T

I just hope my kids don't get chosen to participate in the Hunger Games.

Tom Slick said:
I just hope my kids don't get chosen to participate in the Hunger Games.
Click to expand...

Just make sure they can use a bow...

The plane crashes were recent....I know for sure one was

DILLIGAF said:
The plane crashes were recent....I know for sure one was
Click to expand...

It's smelling kinda fishy around here. And not the good fishy smell. More like rotten catfish
D

Not only damage to 20 plants, now fertilizer shipments are being restricted. Looks to me like an intentional food shortage in the making.

Global terrorism right in front of us so nobody sees it.

A few days ago

Over 60 tons of ground beef recalled

Approximately 120,872 pounds of ground beef products have been recalled due to possible E. coli contamination.

Keep your powder dry, and your pantry stocked. The sheep will be dependent on the government for food, under total control.
Does anyone trust this government to actually "help"?

monkeyswrench said:
Keep your powder dry, and your pantry stocked. The sheep will be dependent on the government for food, under total control.
Does anyone trust this government to actually "help"?
Click to expand...

They've already denounced many of the people they are supposed to represent.

There's no hiding it anymore. They HATE you.

They've already denounced many of the people they are supposed to represent.

There's no hiding it anymore. They HATE you.
Click to expand...

They've hated people like me for a long time...
Now they hate the rest. They've moved on to attacking anyone not within full compliance and of the same group think.

For a bird flu that no birds have...some birds are taken by a government entity, killed so they can be "tested", and then the farmers are being told to destroy their "infected" flock.

Didn't make any mainstream news, but a couple of farmers have told the government to pound sand. More need to.

Next up... Baby formula.