Lake Powell is a tad low

c_land said:
Havasu has to maintain a certain level for the Pumps to operate and to fill water allocations. They call it a balancing reservoir.
Click to expand...

When powell and mead cant supply water cause they are too low where will havasu get its water then? sure its last in line but it can come just think most cry there if it drops a foot or 2.

77charger said:
When powell and mead cant supply water cause they are too low where will havasu get its water then? sure its last in line but it can come just think most cry there if it drops a foot or 2.
Click to expand...

Think of the series of lakes on the colorado river like one big battery. One lake being empty doesn't necessarily mean the battery is drained. Neither Powell/Mead supply the water. The upper colorado water shed supplies the water . There is an amount of water going in and an amount going out. Everything else is storage. It is purely the operator of the battery that determines when and where to use the storage. Powell/Mead are contractually 1st to provide the water stored in them. Mohave and Havasu are not "next"... The CAP in Arizona gets cut and Nevada allocation gets cut next. So that is on the output side, basically the batteries output get cut before the next series of storage gets used.

But to your point, once the input can not keep up with the output and the storage (battery) is drained... everyone is out of juice. But that's not this year regardless,...
P

Boat 405 said:
The lake has been lower than this before. These articles are just more bullshit for people that haven’t been paying attention to the lake for years and all of a sudden it’s a disaster. Yeah it’s low. Yeah it will come back.

2019 we had a huge snow pack. 2005 had good snowpack also. Only a fool would think this isn’t serious. This year not much . This drought is no joke. Nobody knows how long it will last. Powell is gonna be a mess this year. Definitely need to quit letting out more than the rivers flowing. 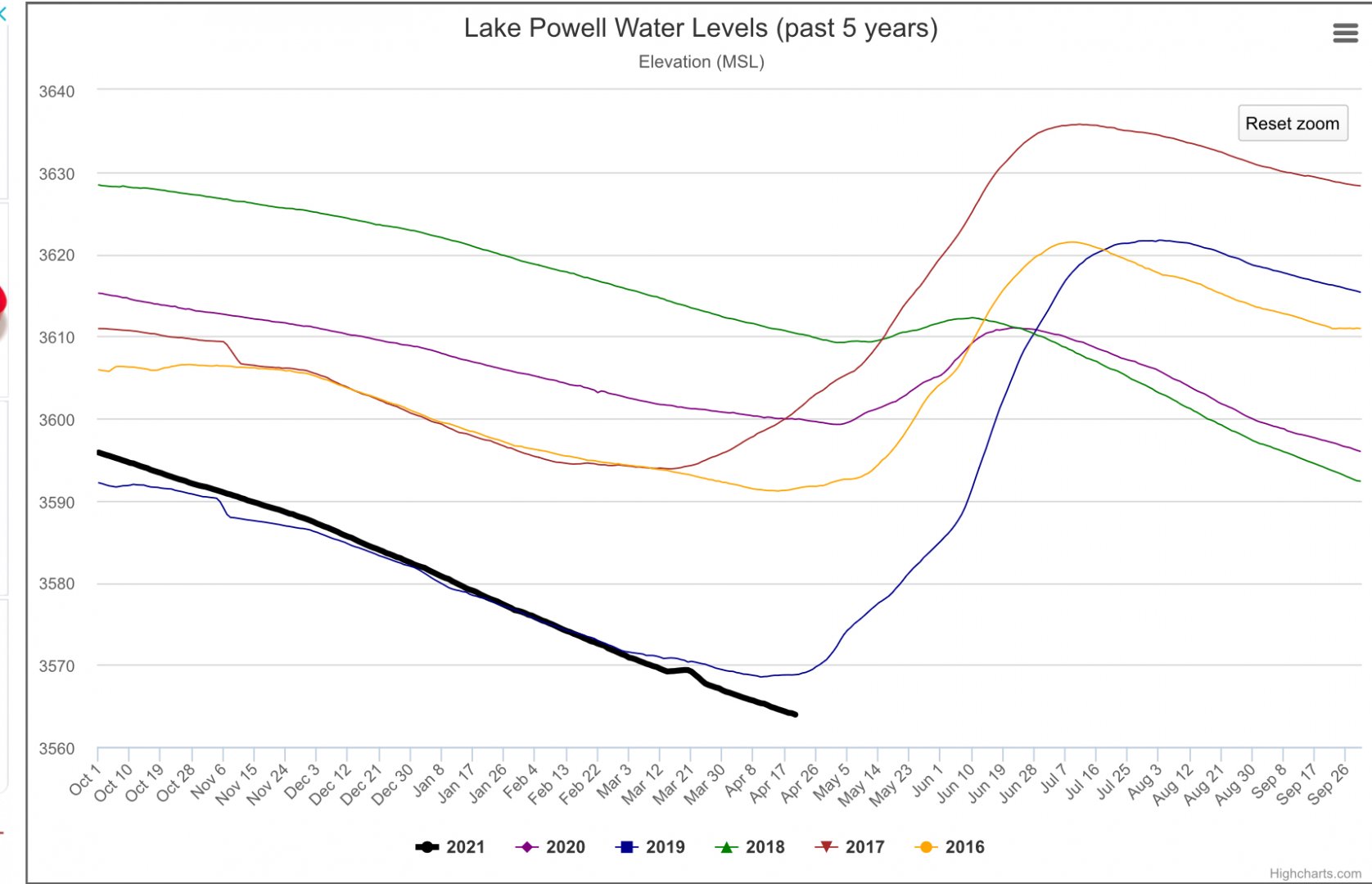 To use another bad analogy... The gas tank is just below the 1/2 way mark at 43% and I don't pull over for gas at the until under a 1/4, but I do starting looking ahead for where to pull over at some point soon.

If you could magically turn off every drop of water coming into the system via snow, rivers and rain today, there would be 3 years of water left without asking anyone to take less.

I remain the external optimist! 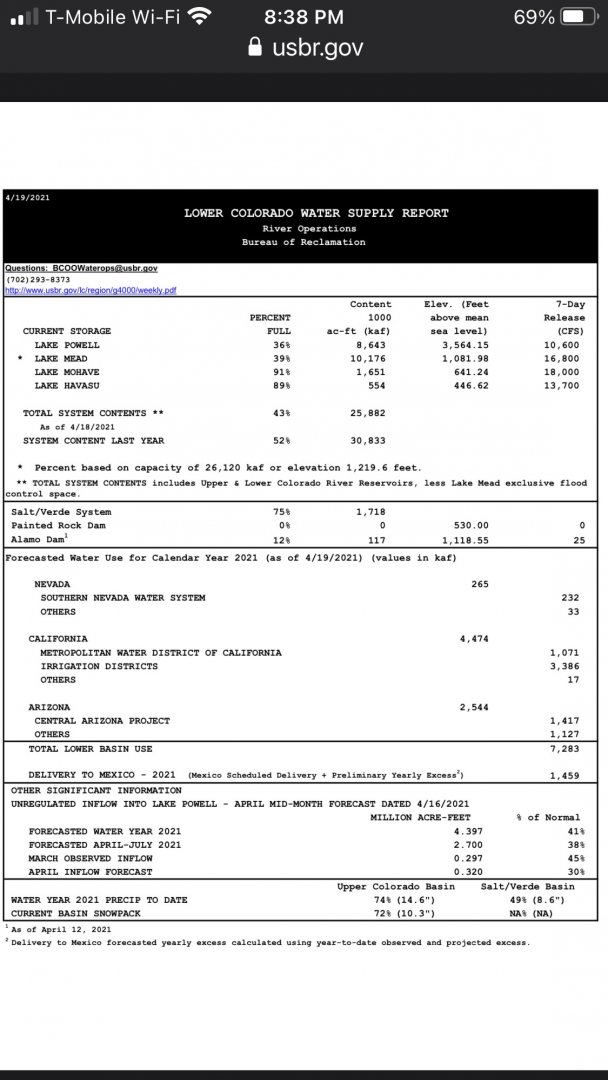 I read an article this morning that california wants to build giant carbon vacuums to pull carbon out of the air to help fight climate change. Meanwhile they keep building high density housing across the southwest with no regard to the water requirements with the associated population growth.

How many desal plants and reservoirs could this pay for?

For some reason Desal plants are a no go, but yet they'll complain about the rising sea levels. I never understood the logic.
D

Nordie said:
For some reason Desal plants are a no go, but yet they'll complain about the rising sea levels. I never understood the logic.
Click to expand...

Its expensive is the number one reason. Water cost through a desal plant is typically about double what it costs to pump it from naturally occurring sources. I don't think the question is whether or not the plants are needed but rather who is going to pay for it.

The last major damn in California was built in 1979. Heres a list of the 10 largest: 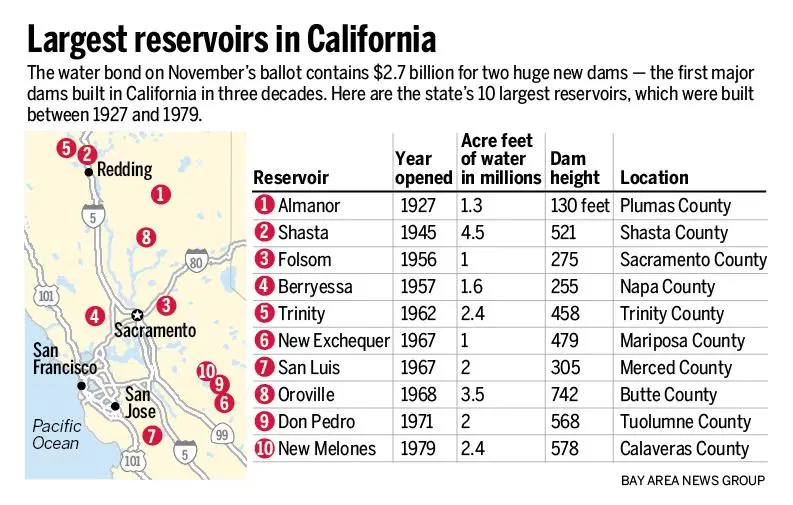 The diamond valley dam, the last dam of any consequence built since 1979 was completed in 1999 and holds 800k acre feet which is just about equal to all of the other reservoirs built since 1979. Meanwhile the population numbers since 1979 have grown from 23mm to 39mm as of 2020.

Arizona has nearly tripled the size of the lake pleasant reservoir with the new waddell dam in 1992. Nevada, Utah, Wyoming, New Mexico and Colorado have not created any new reservoirs of consequence since 1979 that I know of. Someone correct me if I am wrong.

A total population increase of roughly 28.5mm without enough additional infrastructure to support it and you end up with issues.

I was kinda hoping that Trump would stop the flow of water to Mexico but that didn't happen and he was our best chance to do so...

There is some hope on the desal route. There are a few companies experimenting removing lithium from the salt water brine that desalination plants produce that could greatly offset the costs of running the plants.

pkbullet said:
I hate to be negative about the town we own a business and have lived in for 30 years, but we want out of here badly. The politics of this state have made me no longer want to be a New Mexican. The homeless filth and COVID rules are the final straw. We have been adding property in TX and are changing residency. If my business could be moved I would do it in a second. My wife grinds on me most days to sell out and move completely.
Click to expand...

My FIL is the GM of Clovis Sign Company in Clovis NW. The rules have killed in state business, they survived by servicing customers in TX, AZ and UT

Where do you look on line for this?

ONE-A-DAY said:
Where do you look on line for this?
Click to expand...

ONE-A-DAY said:
Where do you look on line for this?
Click to expand...

Yea, what MC said above.