Ragged Edge said:
, but, if I was one of these folks as soon as Trump left office I would have been formulating my own exit plan.
Click to expand...

That's a REALLY good point ! . . . it doesn't take a genius to see that this Biden clown is 'Soft' he's physically frail and mentally deficient, especially compared to '45' !
The aggressive foreign leaders must've been licking their chops like a pack of wolves when he took office.
And that horse face VP, acts exactly like the 'bitchy back-stabbing chick' in high school who hung out with the all the 'Hotties', but couldn't accept the fact that she was a dog . . . nobody ever liked her, not cause she was a dog, but because she was a bitch and no one trusted her. Same exact shit.

Ragged Edge said:
I understand what you're saying here, but, if I was one of these folks as soon as Trump left office I would have been formulating my own exit plan. It has been pretty clear (to anyone willing to see it) for awhile now that this administration does not know what the fuck it's doing, especially on the international stage.
Click to expand...

I can’t say what goes through their head but I know people that are will to go work in the buttfuckistans to serve their country aren’t wired the same as a normal human, they are badasses. Whether they are an engineer or a door kicker I’m sure there are a lot who stayed over their because they didn’t want to abandon their brothers.

Why would we even consider the odds of the current VP running against the current President for the same office??? 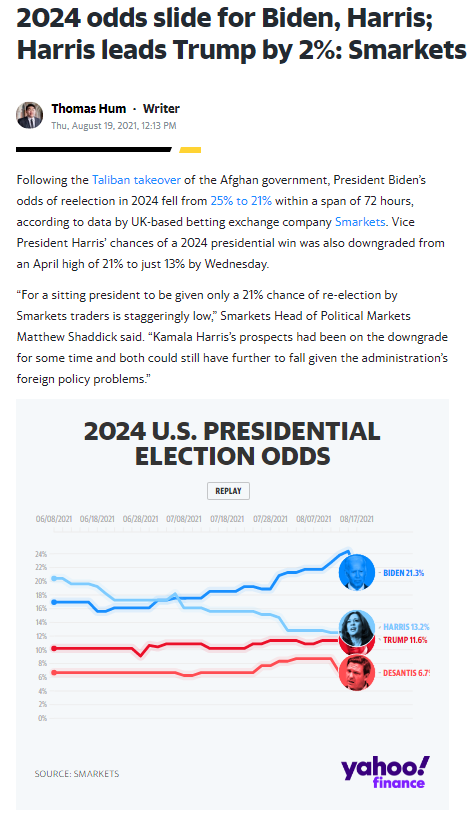 Following the Taliban takeover of the Afghan government, President Biden’s odds of reelection in 2024 fell from 25% to 21% within a span of 72 hours according to data by UK-based betting exchange company Smarkets.

stokerwhore said:
bullshit. they knew EXACTLY WTF they were doing. this was no accident. when you realize biden et al are controlled by china it makes more sense. AND they have the reatard in chief to blame it all on.
Click to expand...

This is on point!! China is already moving in to takeover the mining in Afghanistan. Their end game is to control the Middle East and all their natural resources that they need for world dominance. Biden is in on it. Why else would you override all your military leaders advise to maintain a minimum presence and strategic airfields and let this country that we just spent $1 Trillion on infrastructure and military just to hand it over to a bunch of 6th Century Goat Ropers?
You must log in or register to reply here.
Share:
Facebook Twitter Reddit Pinterest Tumblr WhatsApp Email Share Link