The Hobbit by Krazy Kolors

Chuck Boyd wanted to circle race his flat bottom boat in the late 60's. The classes available were Super stock (427 ci) SK (400 ci) and E (small block). None of those classes allowed larger engines or superchargers which is what Chuck wanted to race with. So Chuck got with Steve Earl and a few others and they petitioned APBA for an unlimited Flat bottom class. They ended up reviving a class that had existed in the past but fine tuned it for modern flat bottoms of the day. The K racing runabout class was born. Chuck named his boat after his Night club and took on the world for 3 decades enlisting top drivers along the way. Chuck went through many boats in 30 years and even had a factory Sanger sponsorship at one time.

Chuck has since passed on, but his son Chuckie decided he wanted a tribute to his dads racing legacy. He enlisted Billy B. of Krazy Kolors to see the project through. The paint work has all of the past boat colors in it as well as an airbrushed image of Chuck Sr on the deck and the fabled Hobbit character that was on the past Hobbit boats.

Hobbit History
’69-’71 Started in 1969 with a Hallett
Drivers: Walt Dollum,
Don St. John,
Phil Bergeron (He said while laughing, Phil crashed like 4 0ut of 5)
They tried to work with the hull, but it was prone to flipping from sharp chines.
1971 Hallett Hobbit High Points Champion and Kilo record holder. 109.52

’73-‘74 Eliminator
Driver: Paul “Grich” Grichar (1974) SCSC KRR Driver of the year).
Eliminator had business trouble so a switch was made to Hondo.


If any one has anything to add please do.

This is Chuck's wife and Chuckiies mother Holly sitting in the boat at Long Beach this last weekend. 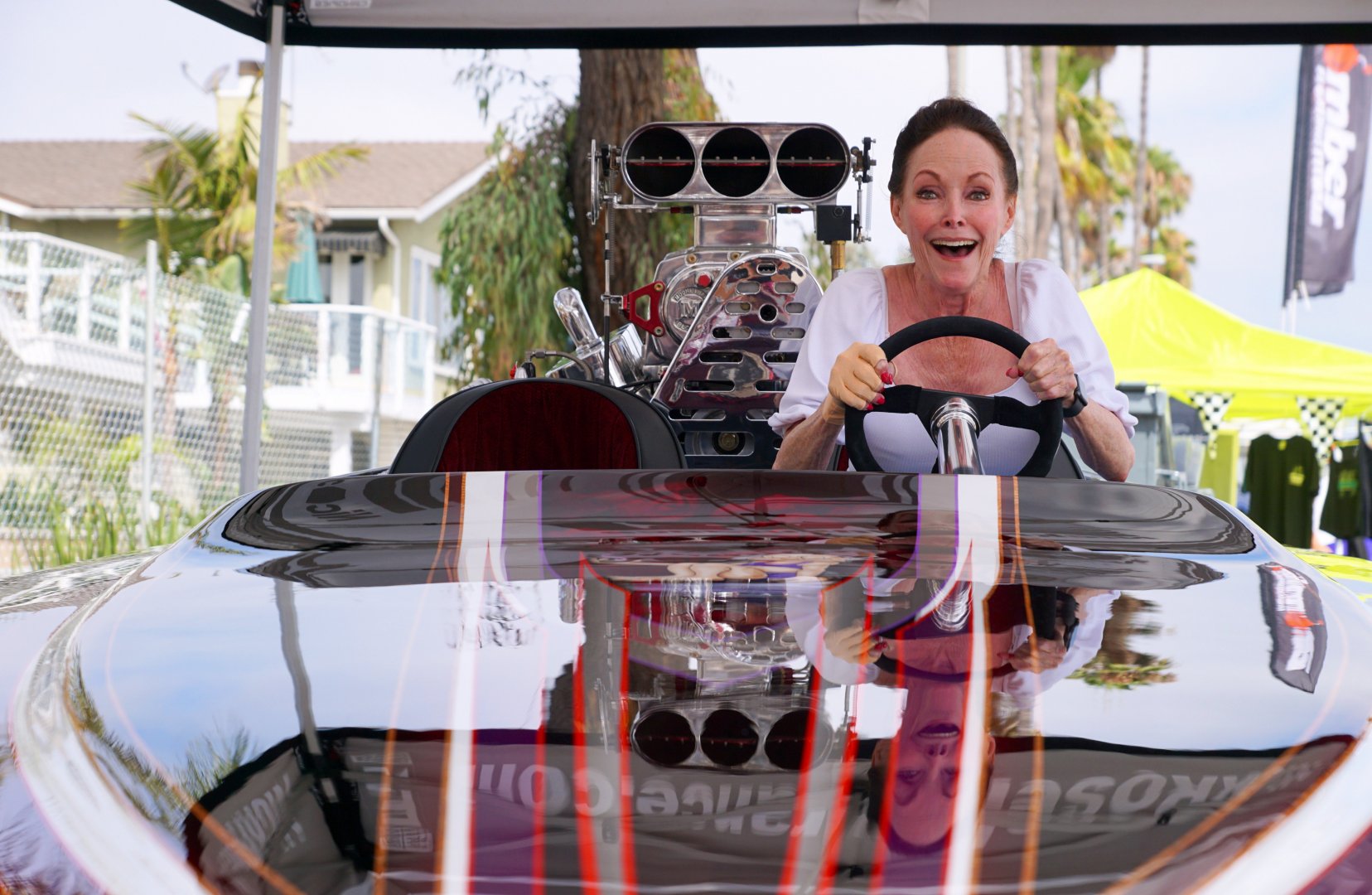 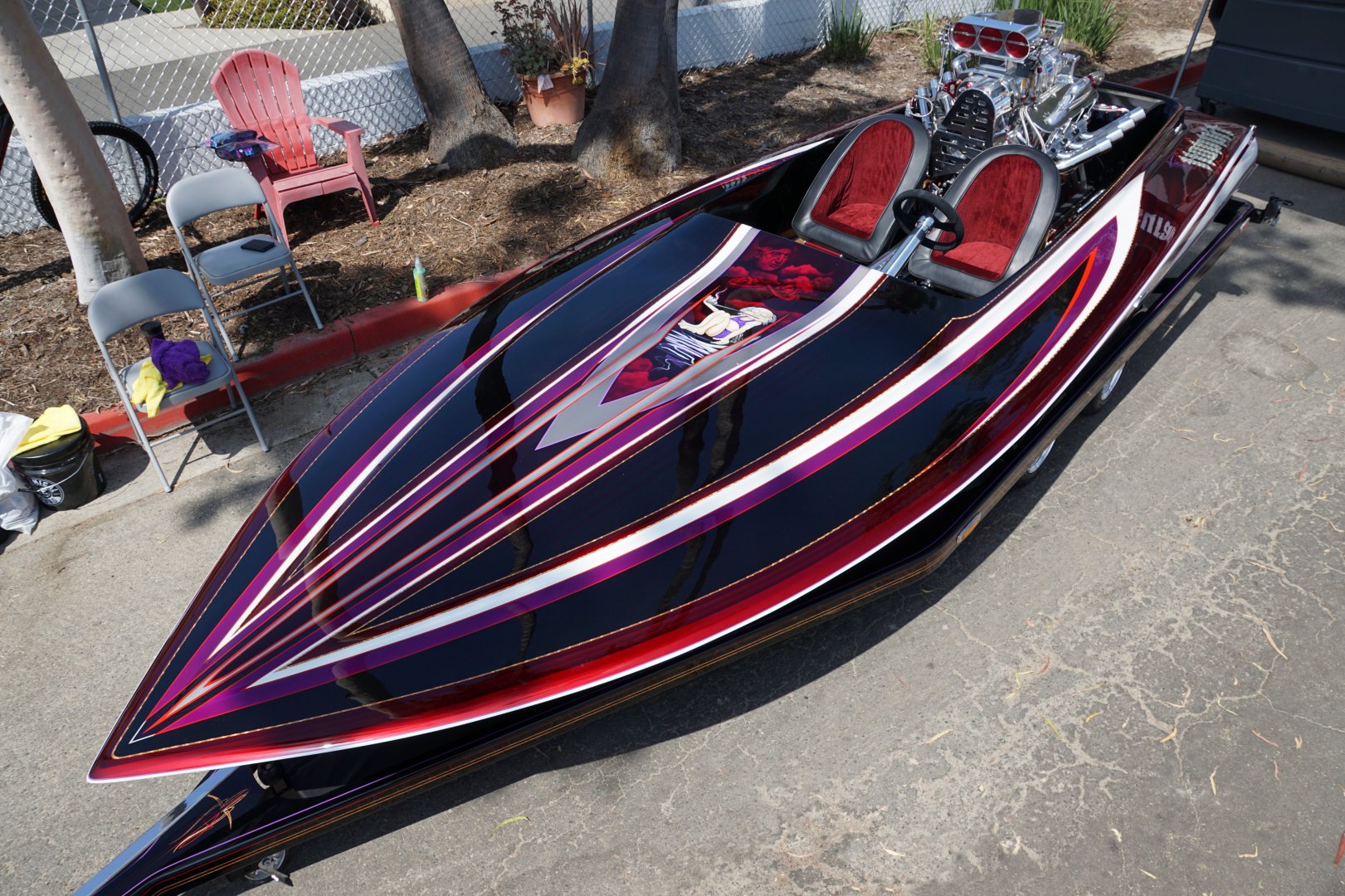 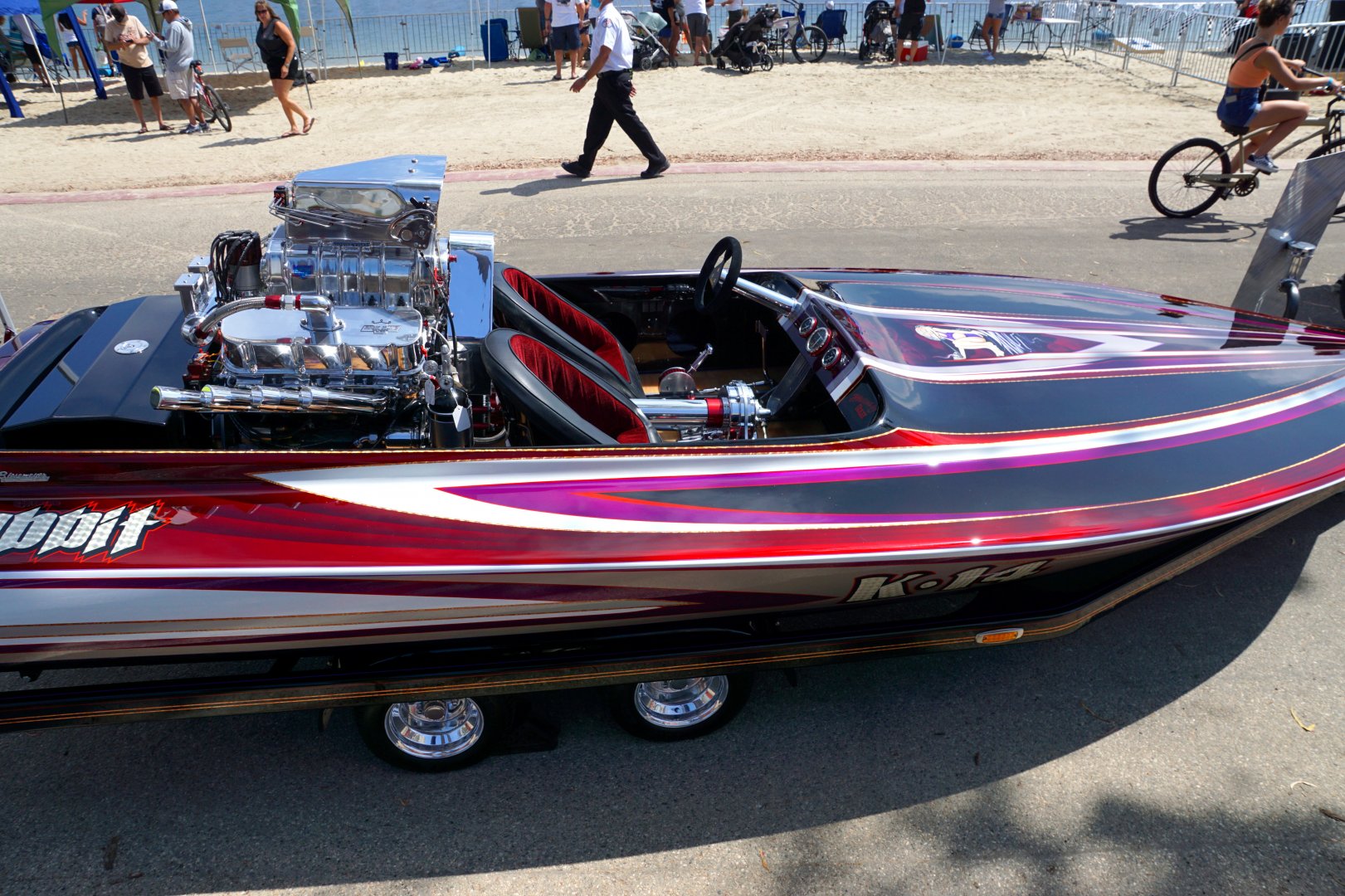 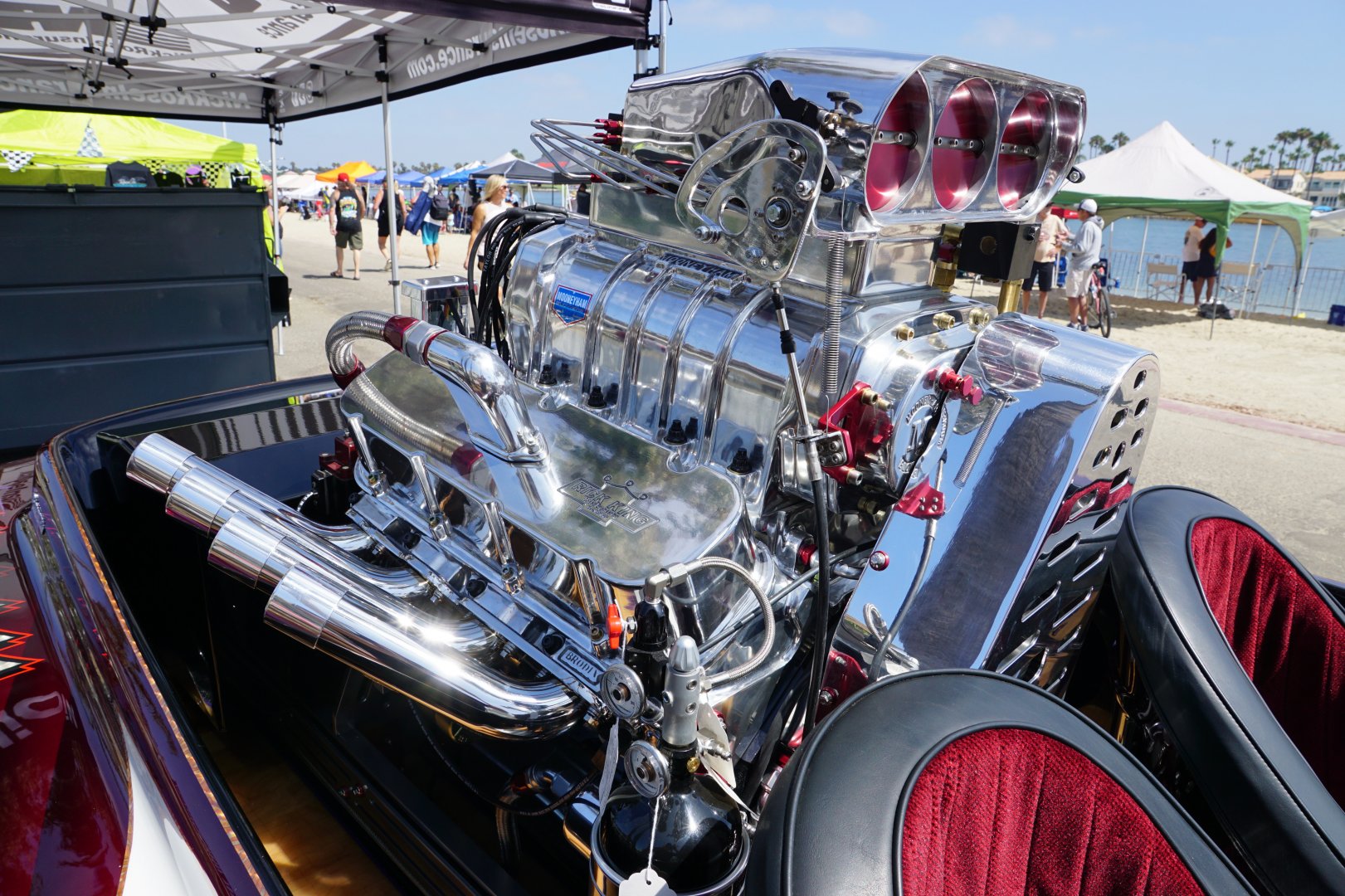 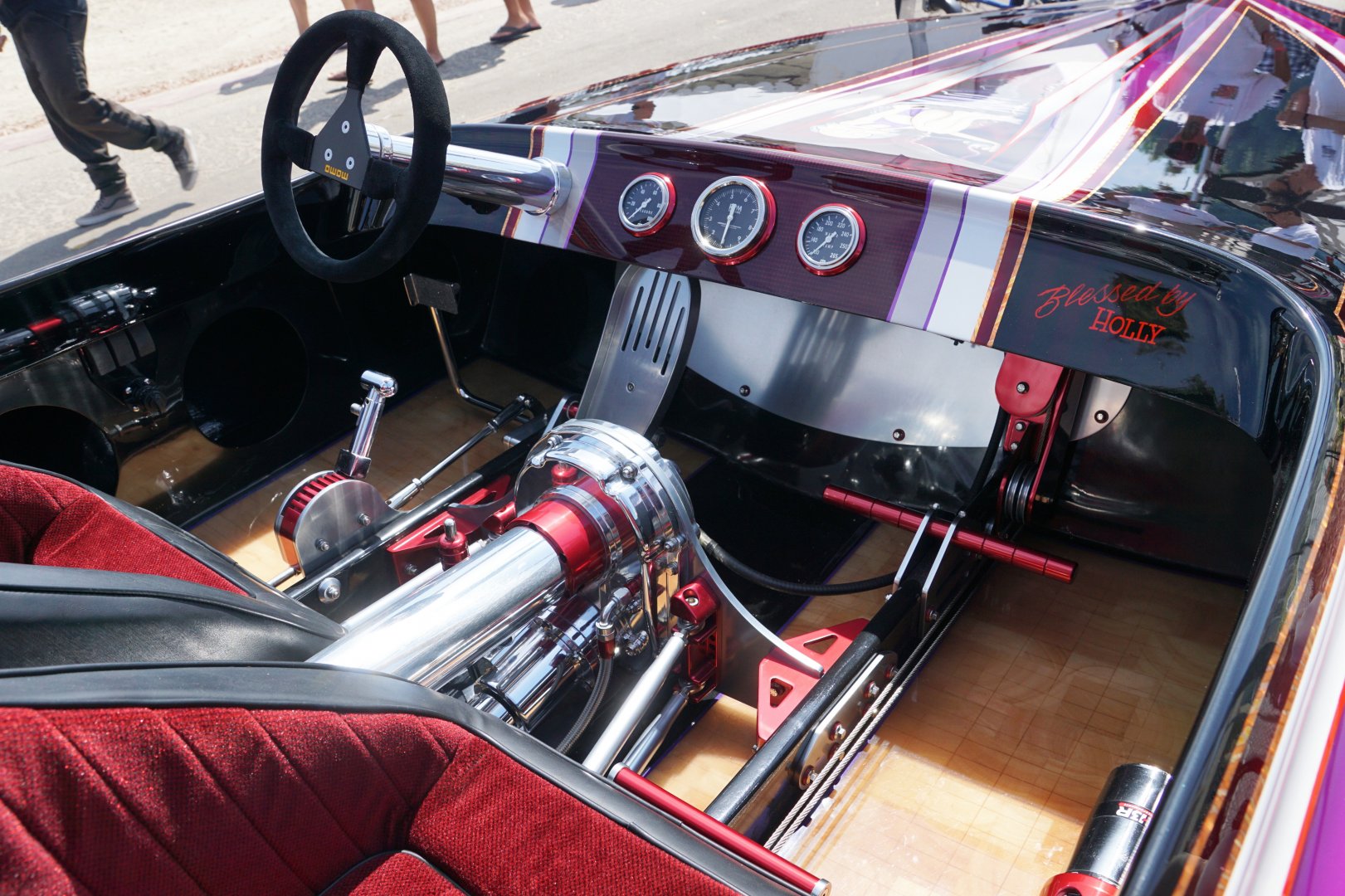 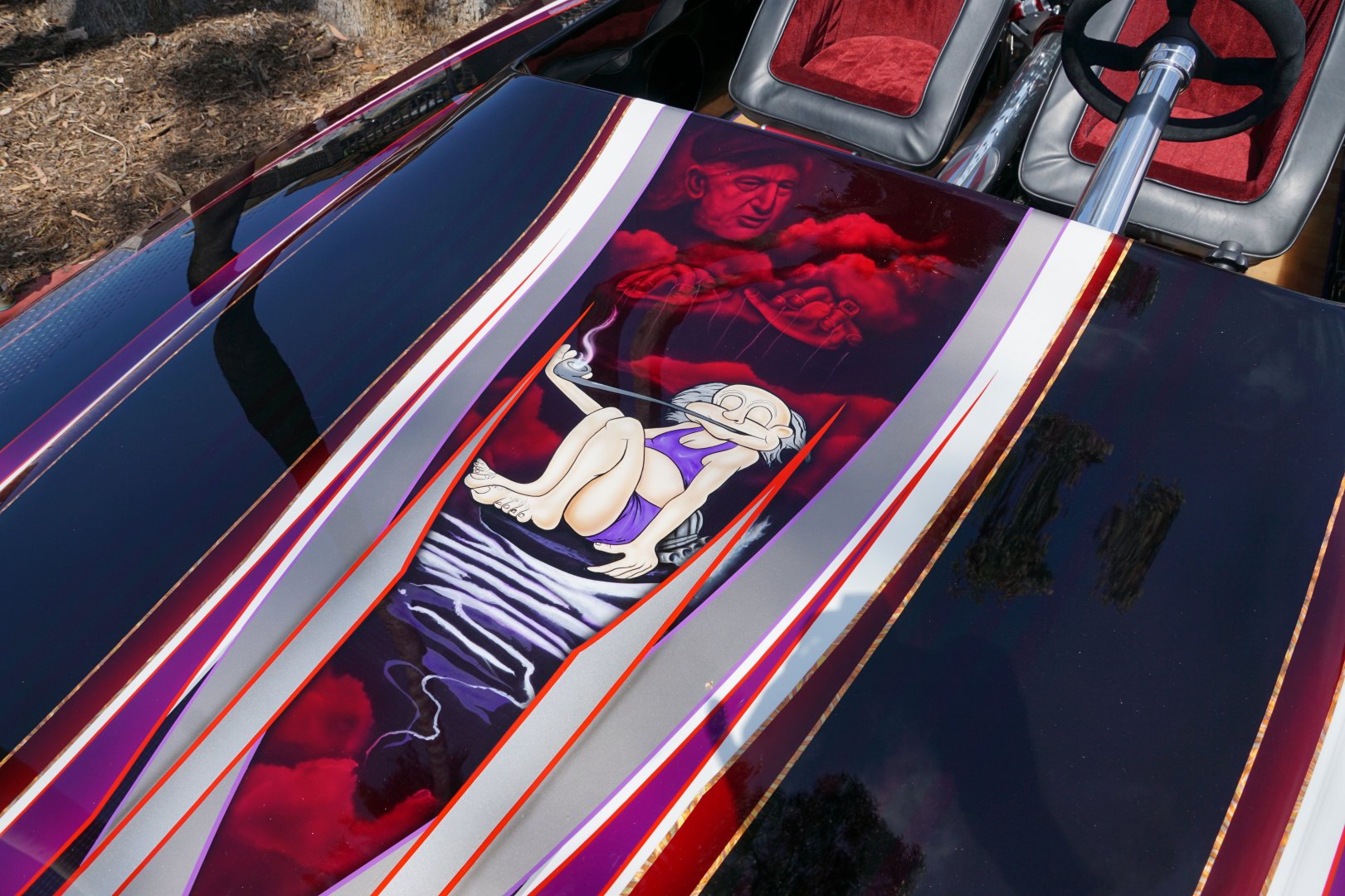 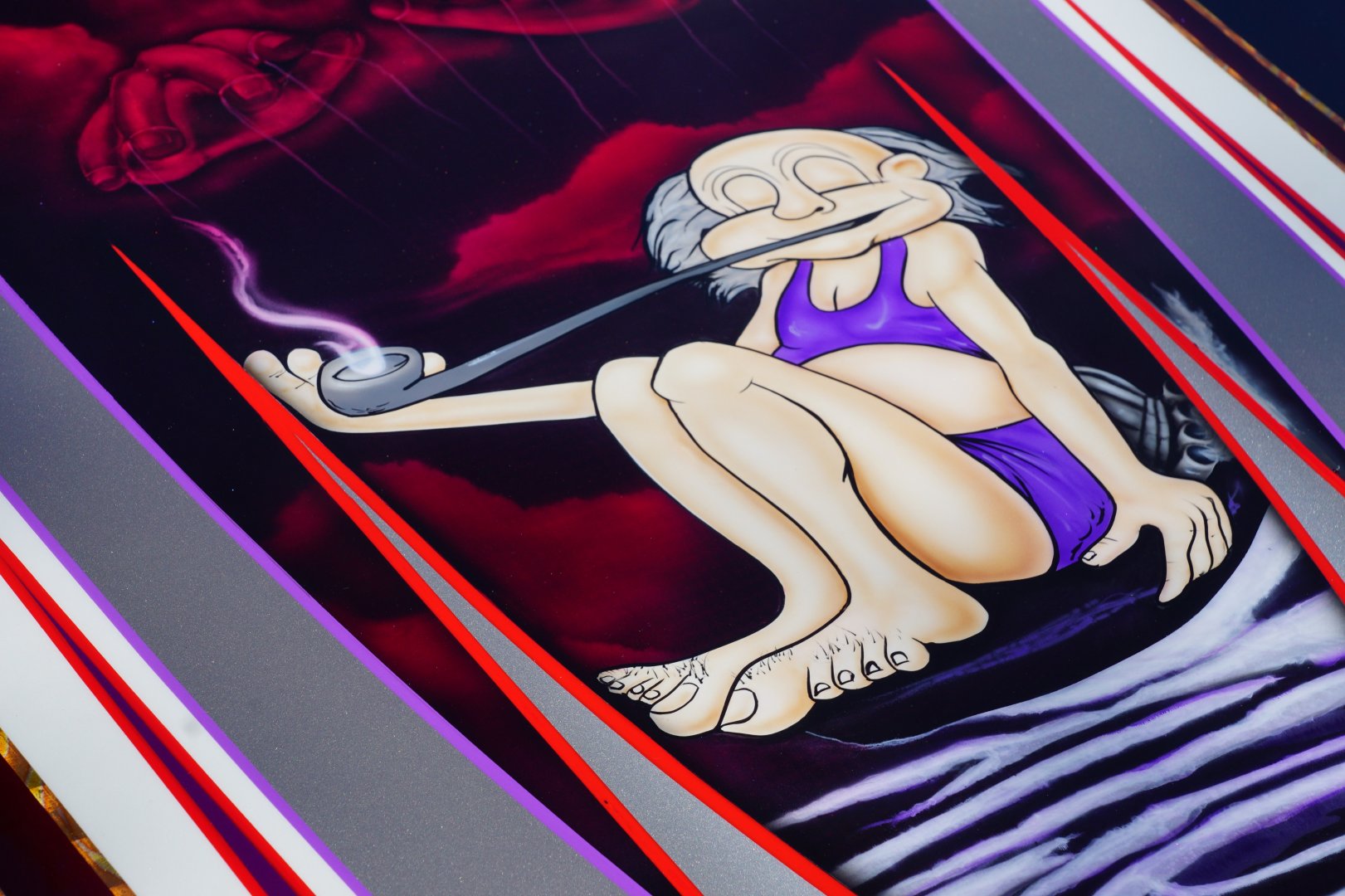 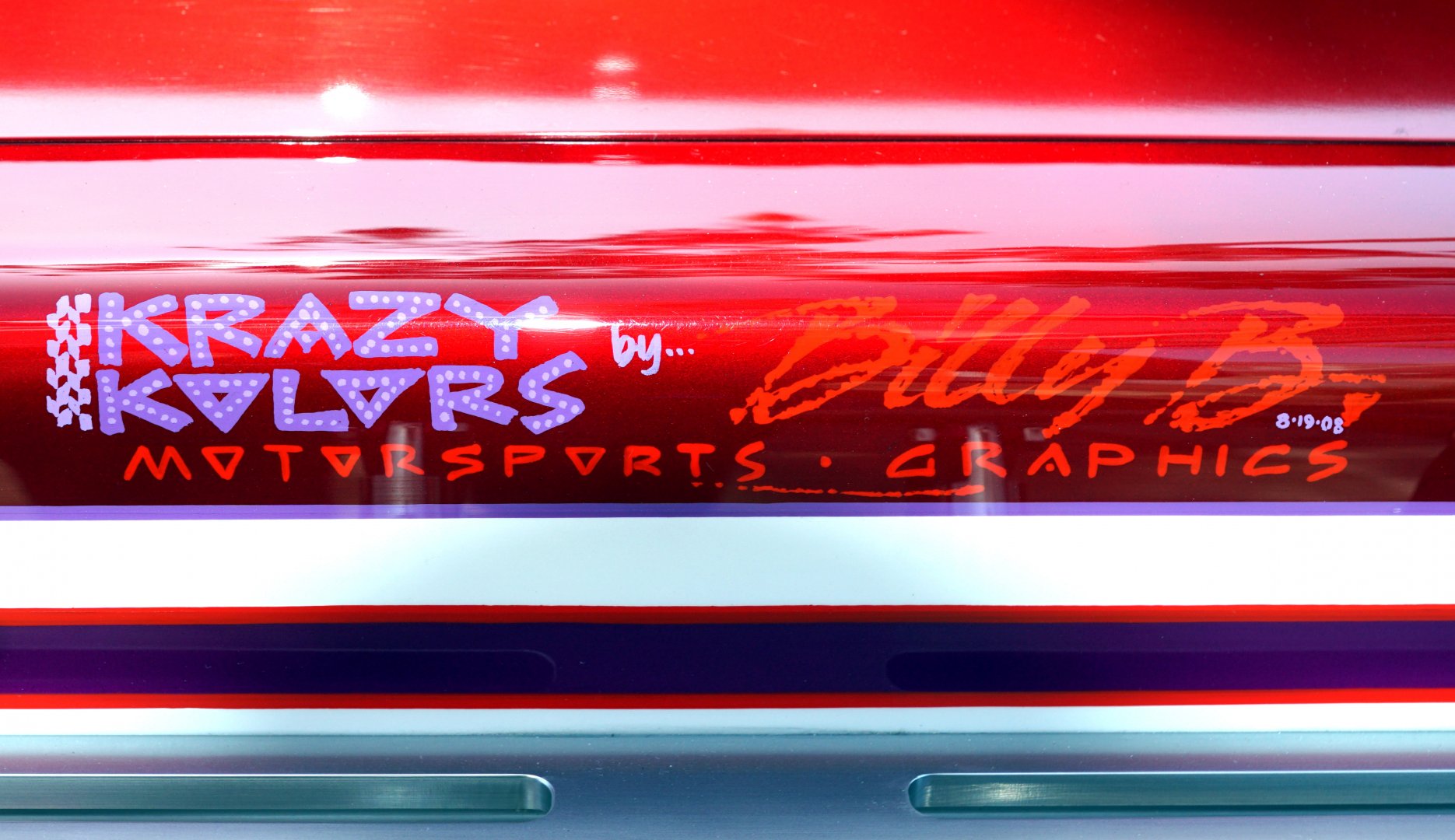 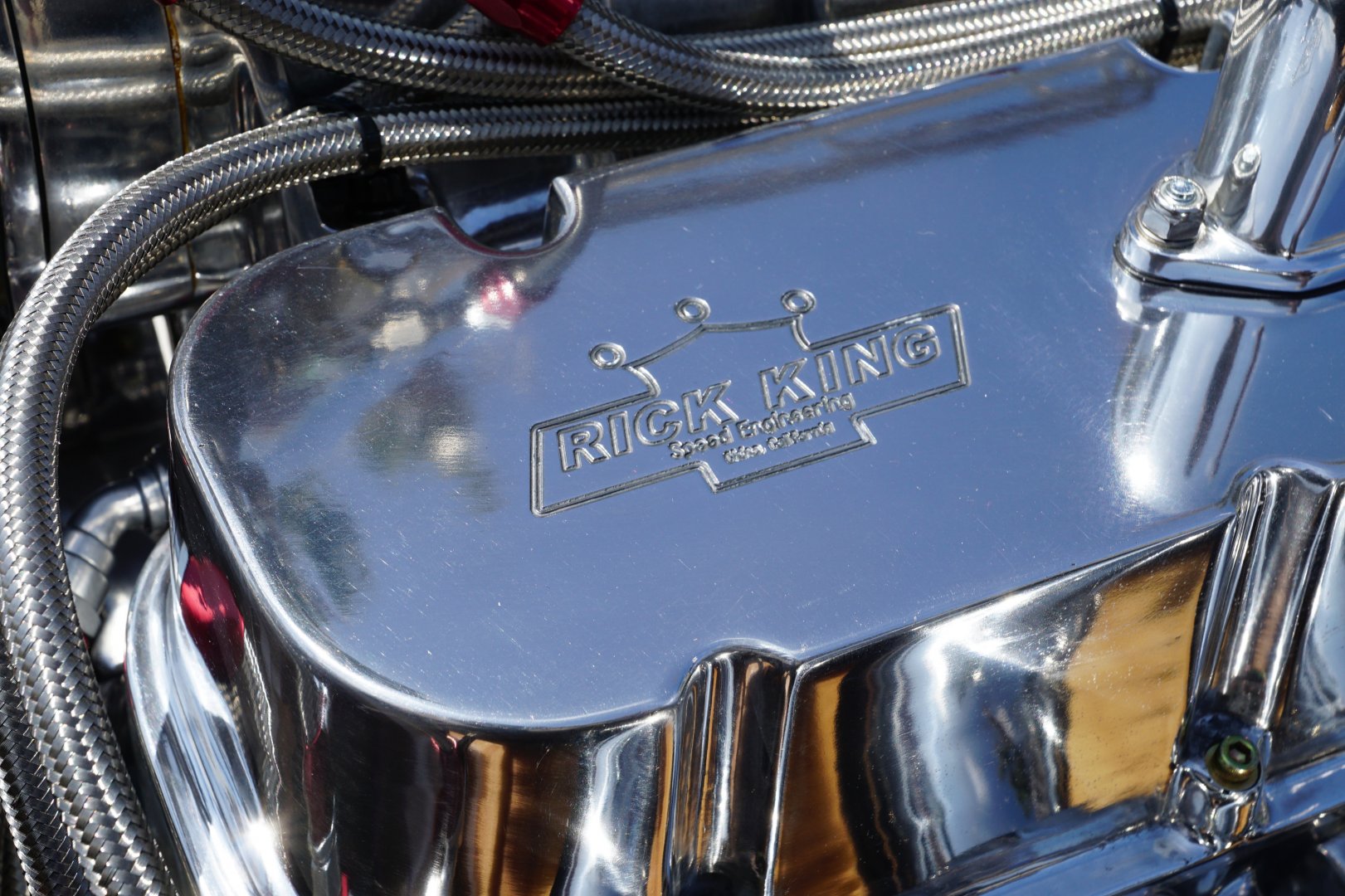 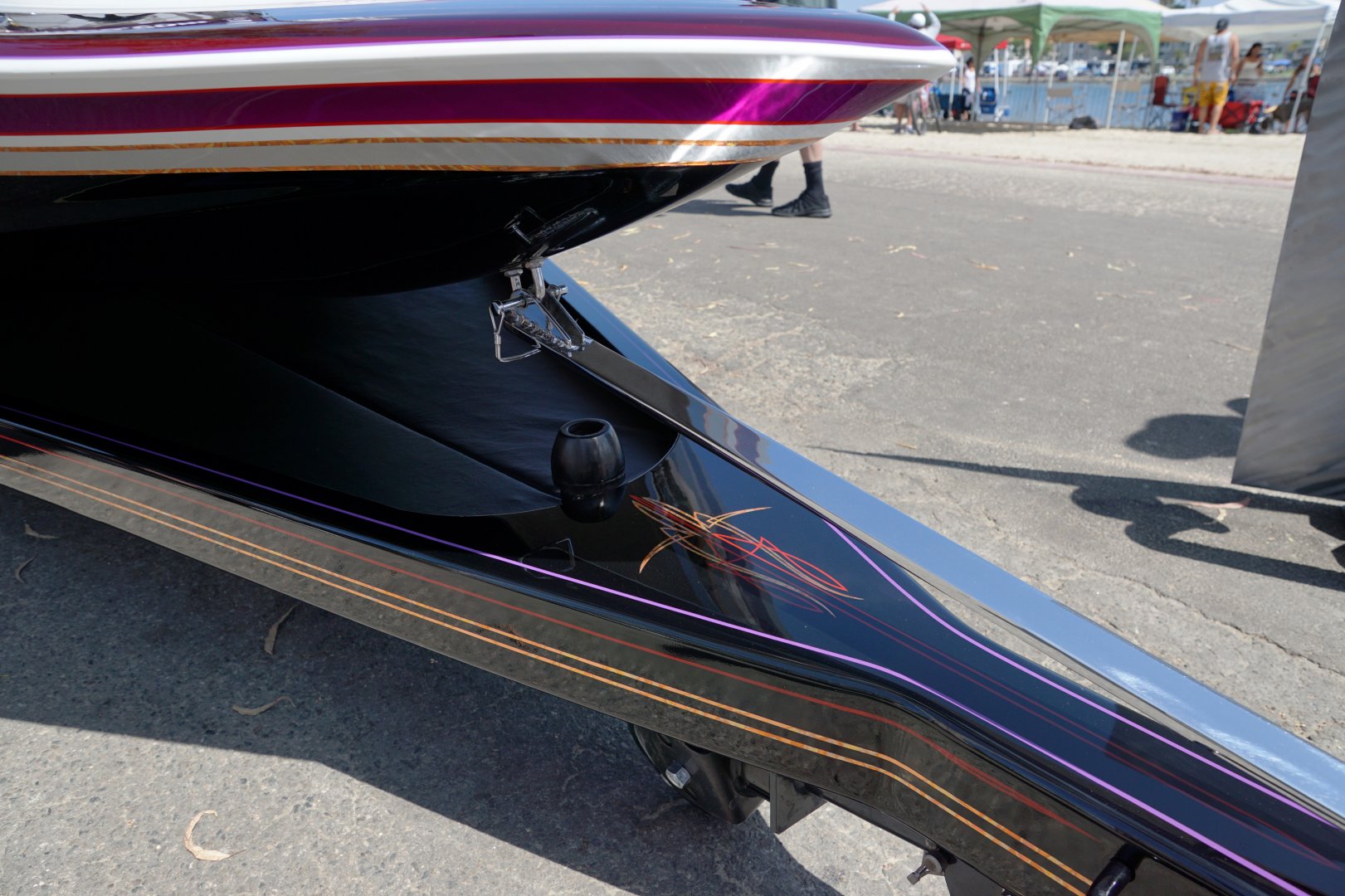 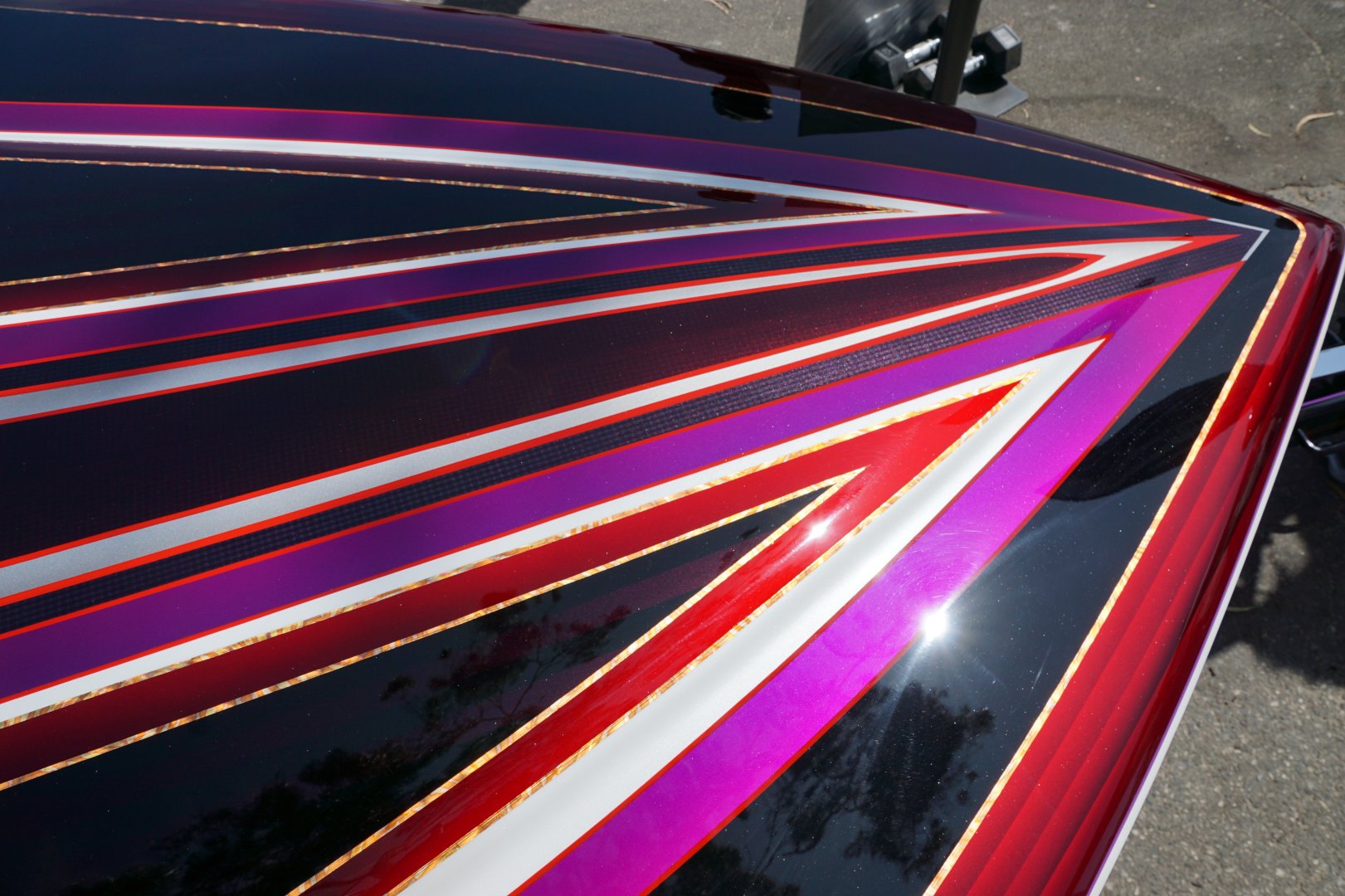 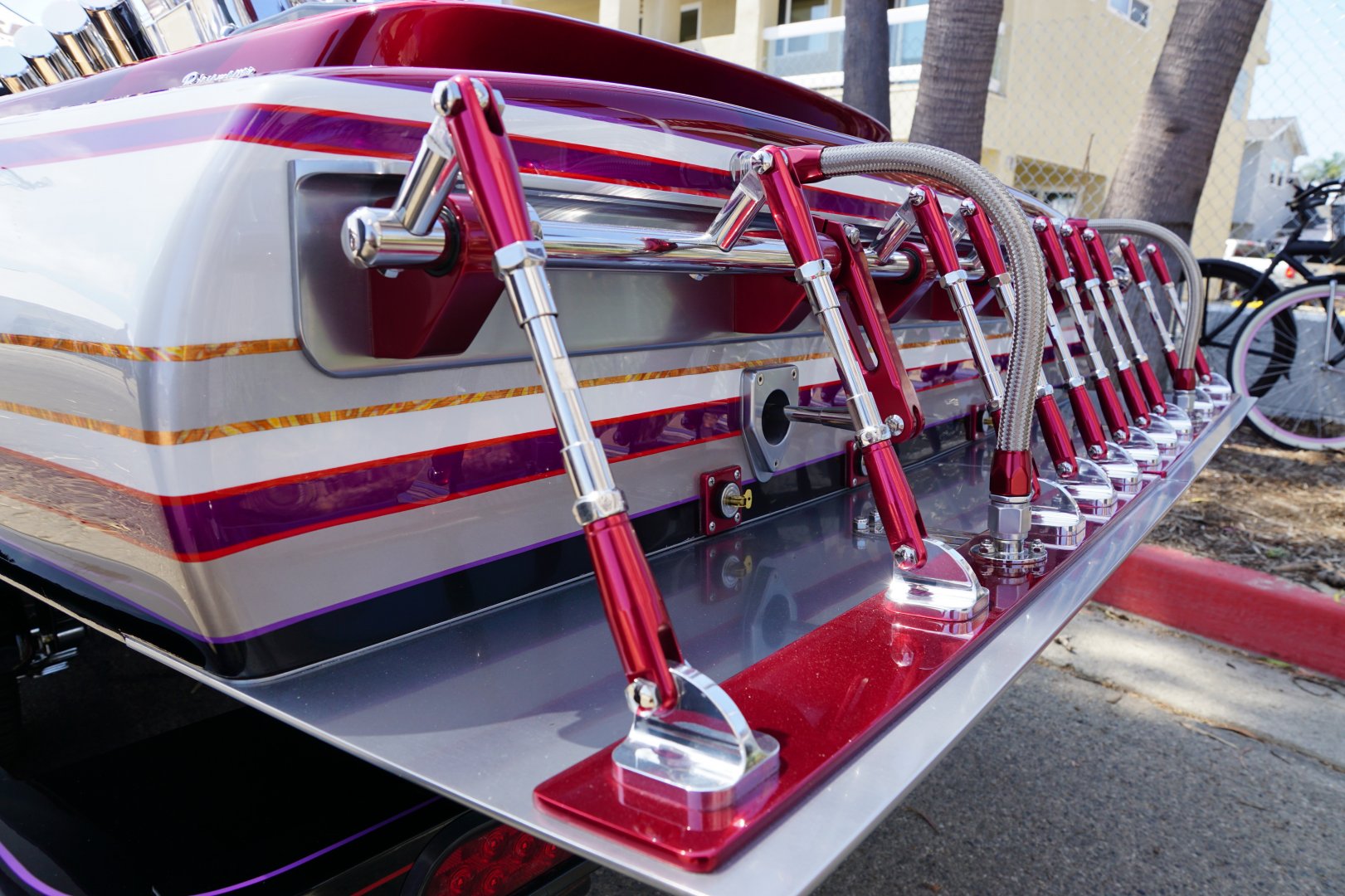 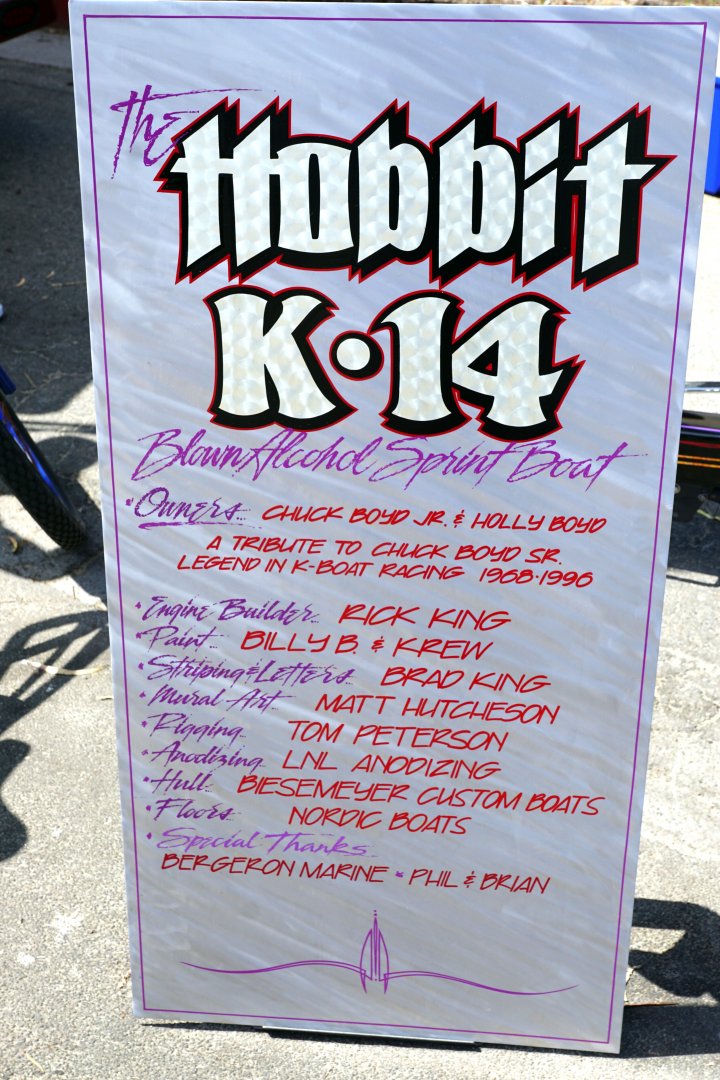 Here's some past photos going all the way back. 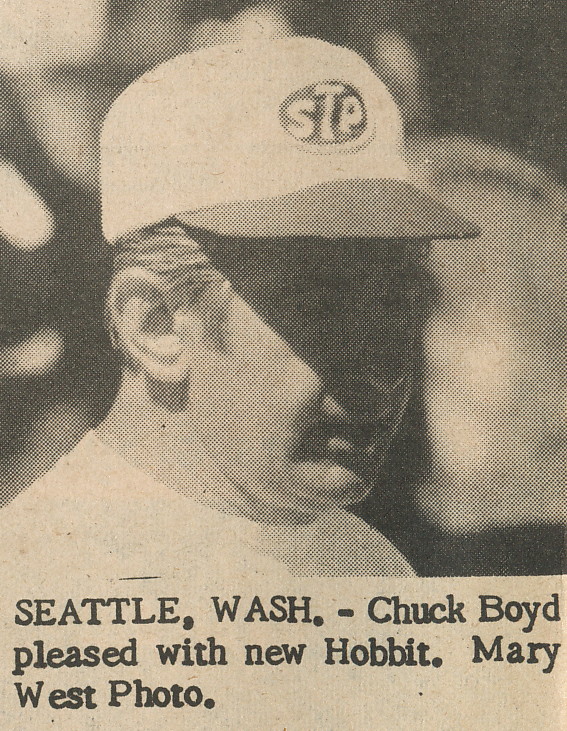 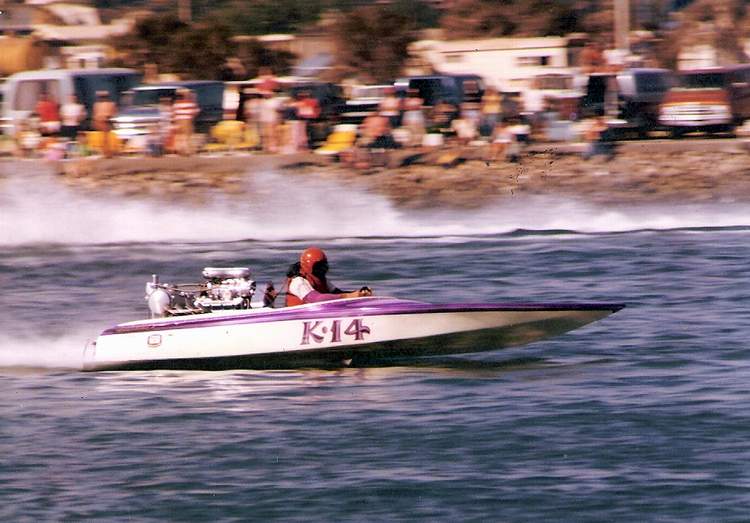 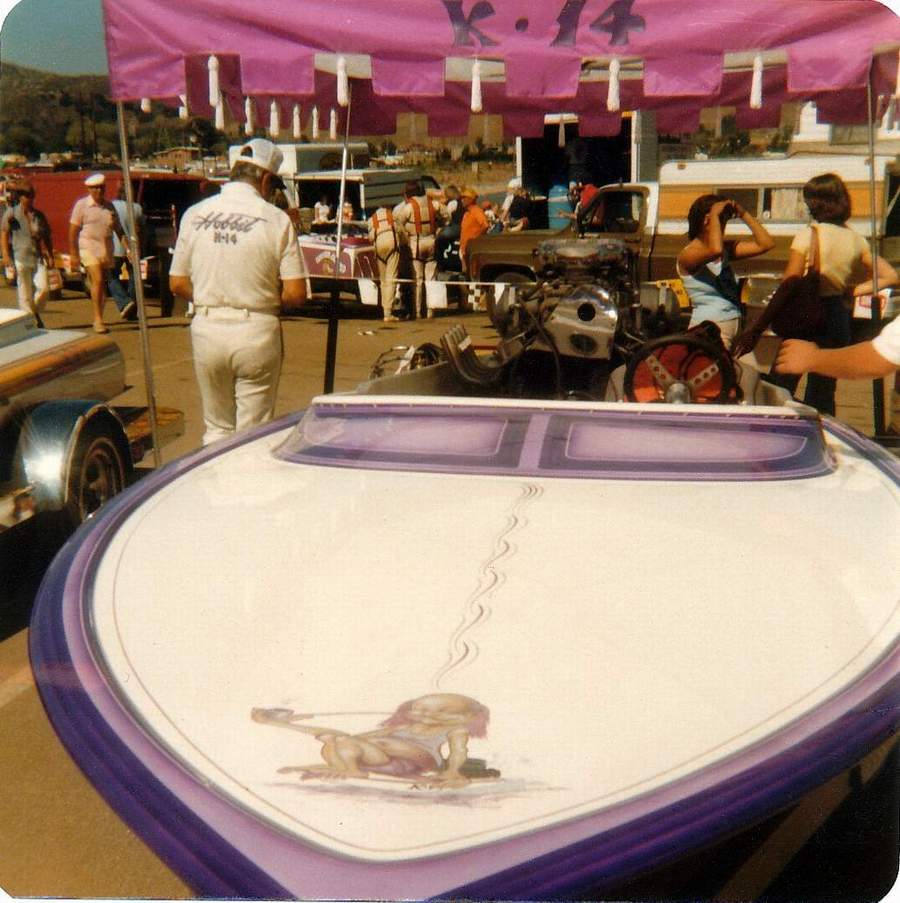 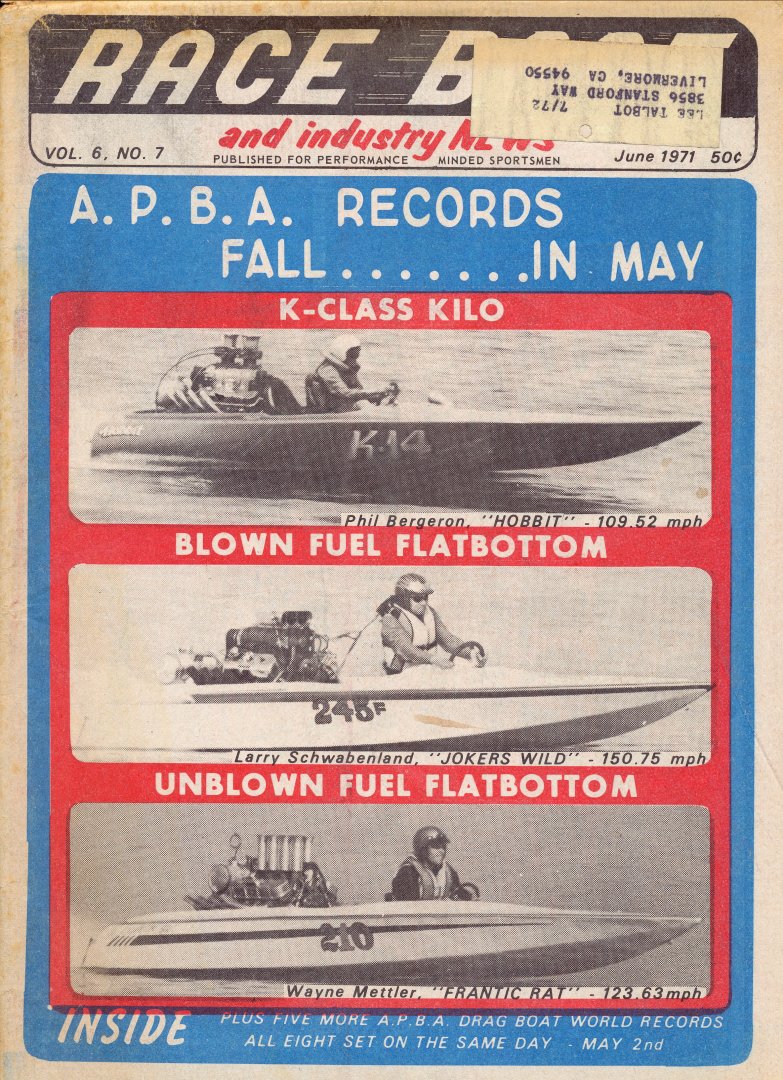 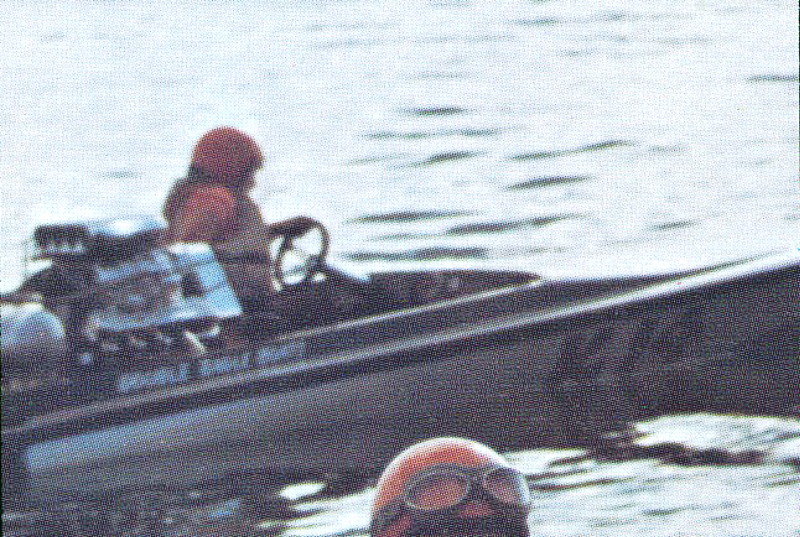 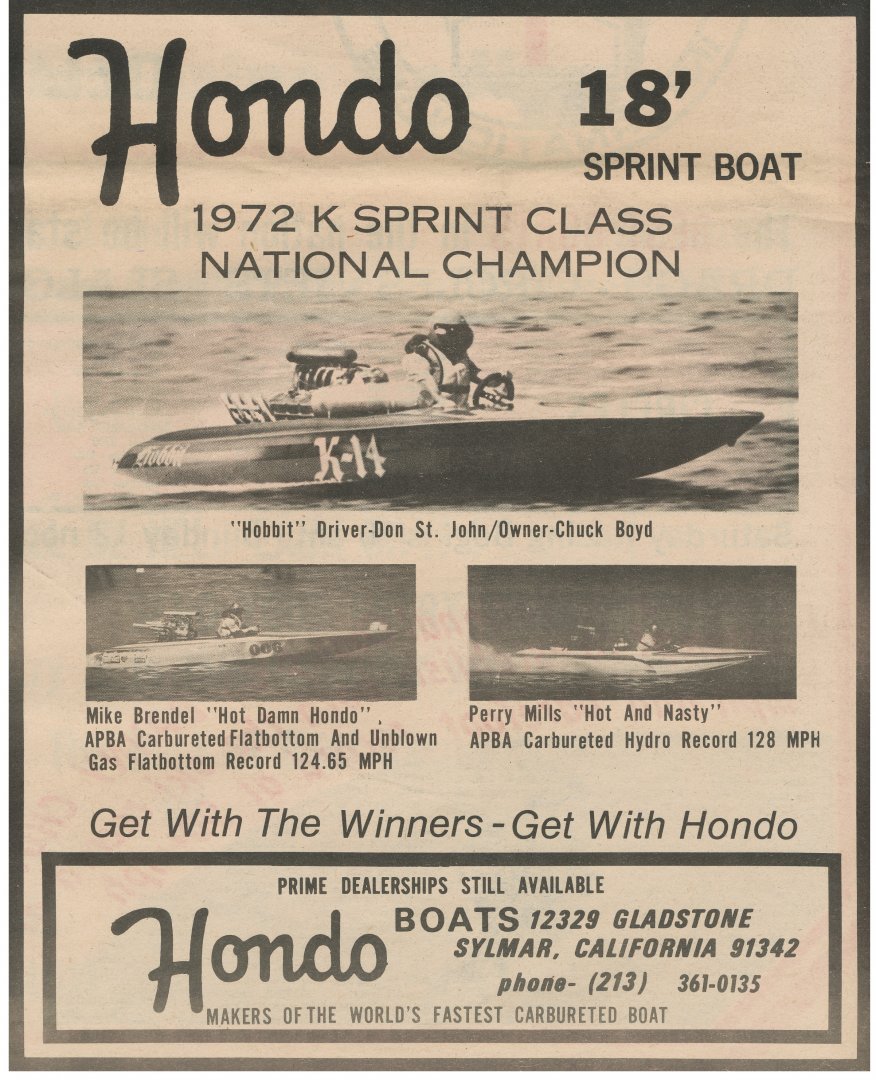 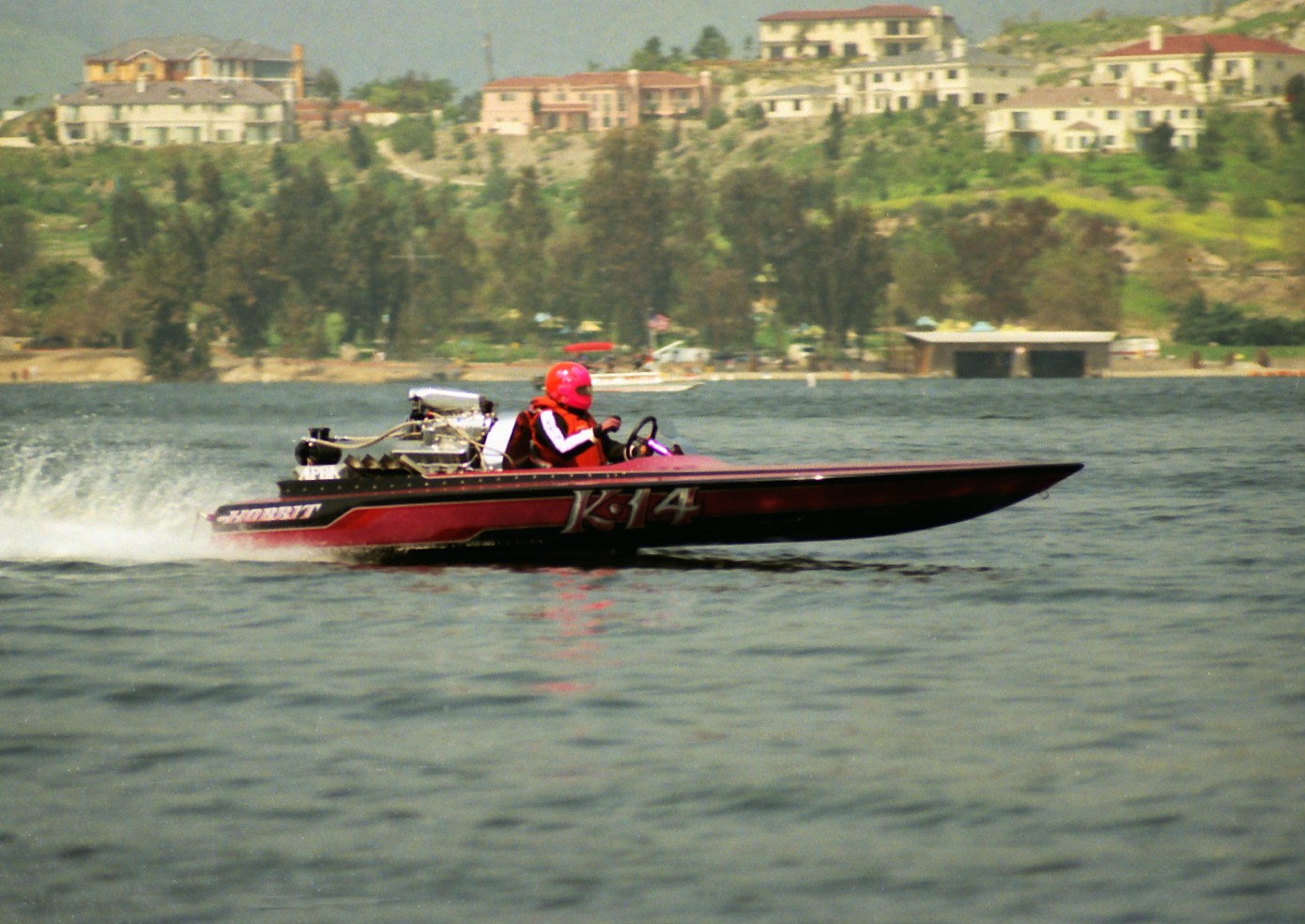 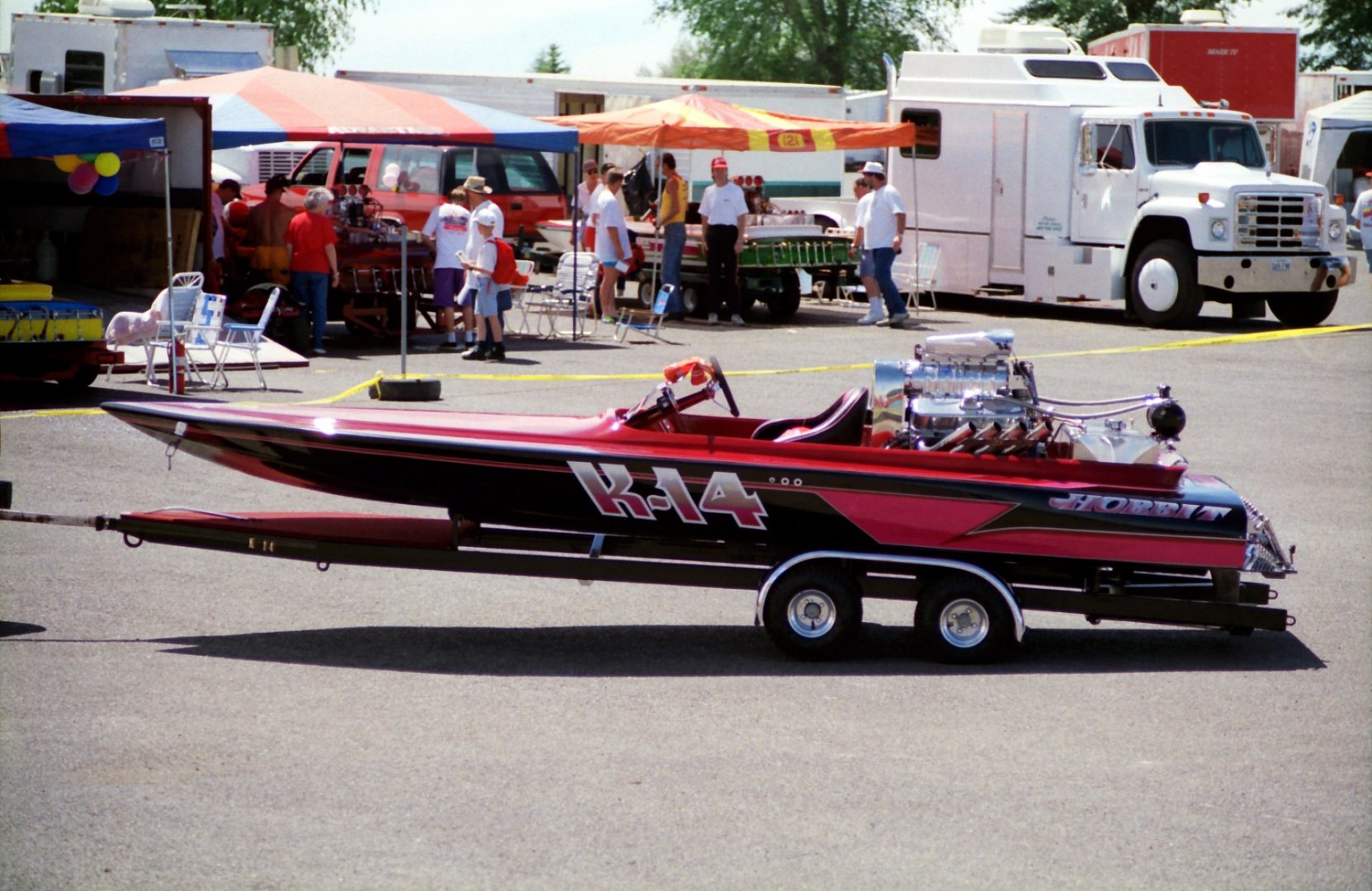 Great story, awesome boat. What a great tribute to a parent.
Billy’s work is next level. We moved the boat in the Needles storage the first month it opened. It was one of the highlights every trip to see what he was working on and the process he went through to get it finished.

just curious is the Biesemeyer a newer layup ?

Does Billy do gel coat too?

Thats AWESOME!!! What a great tribute to his dad. Billy does next level shit for sure. I bet the pics do no justice to how good it looks in person.
Thanks for posting
S

Beautiful Boat. Billy is an artist! 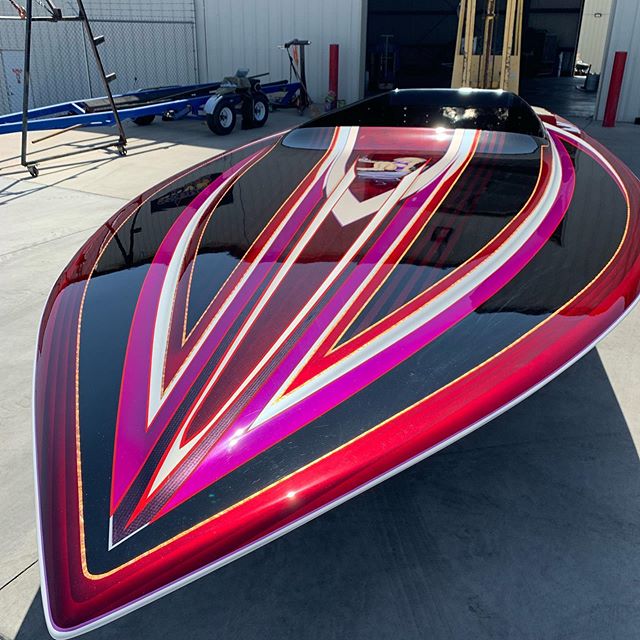 Soooo nice! Where can someone get a passenger foot rest like this? 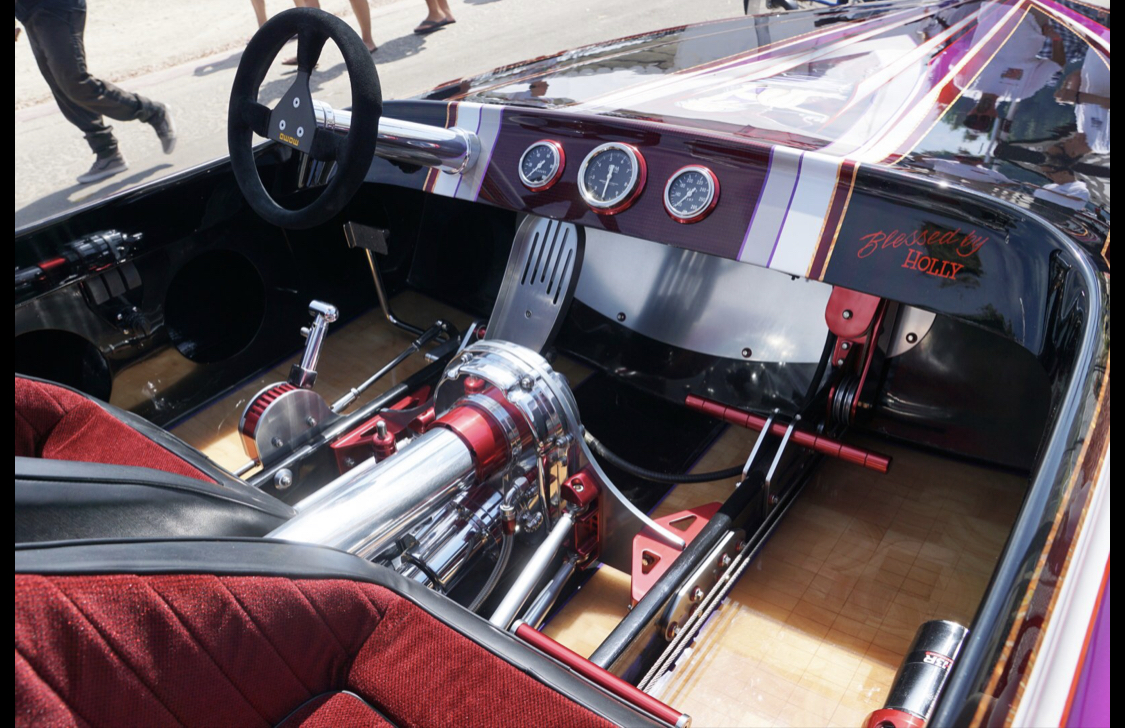 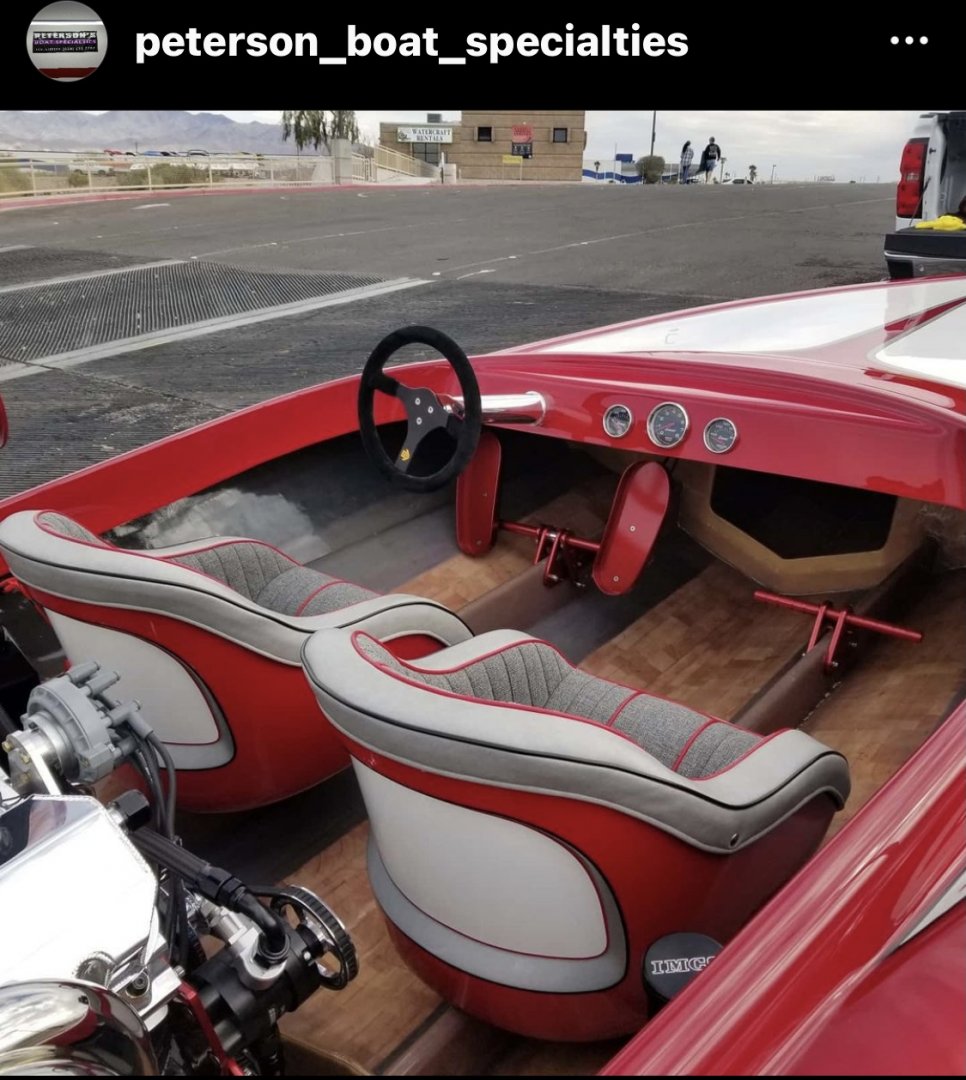 Awesome tribute.....amazing boat, these things are works of art.

Beautiful. I'd have to figure out a way to store something that in my living room.

2 things that I noticed.

The linkage at the hat, I assume it slows down the throttle response and give a bit more drivability? Pretty cool, Id like to see some more detailed pics of it.

There is a date in Billy's logo, 8-19-08, did this project really that that long to complete?

warpt71 said:
2 things that I noticed.

The linkage at the hat, I assume it slows down the throttle response and give a bit more drivability? Pretty cool, Id like to see some more detailed pics of it.

There is a date in Billy's logo, 8-19-08, did this project really that that long to complete?
Click to expand...

Yes, that is a progressive linkage and no thats not a project start date. Lol

The numbers indicate August 2019 and 8th boat since the Krazy Kolors move to Needles.

Most of this stuff is one off custom but I would start with Tom Peterson, who rigged the boat, in Lake Havasu.

Saw this Sunday in Long Beach and it is unbelievable. Damn thing looks like expensive jewelry on a super model.

jerry theres a pic u took floatn around somewhere hobbit daytona n my garage with billy and rcl sitting in it ....funny back n day

That is a complete work of art.

That sir, is a nice boat.

That's just to damn pretty to get wet, should be in a museum- what a beautiful boat
S

From what Chuckie told me that boat will not get wet

svlperry said:
From what Chuckie told me that boat will not get wet

We’ll see about that.

He told me it’s going to be a show boat

MOUZER said:
jerry theres a pic u took floatn around somewhere hobbit daytona n my garage with billy and rcl sitting in it ....funny back n day
Click to expand... 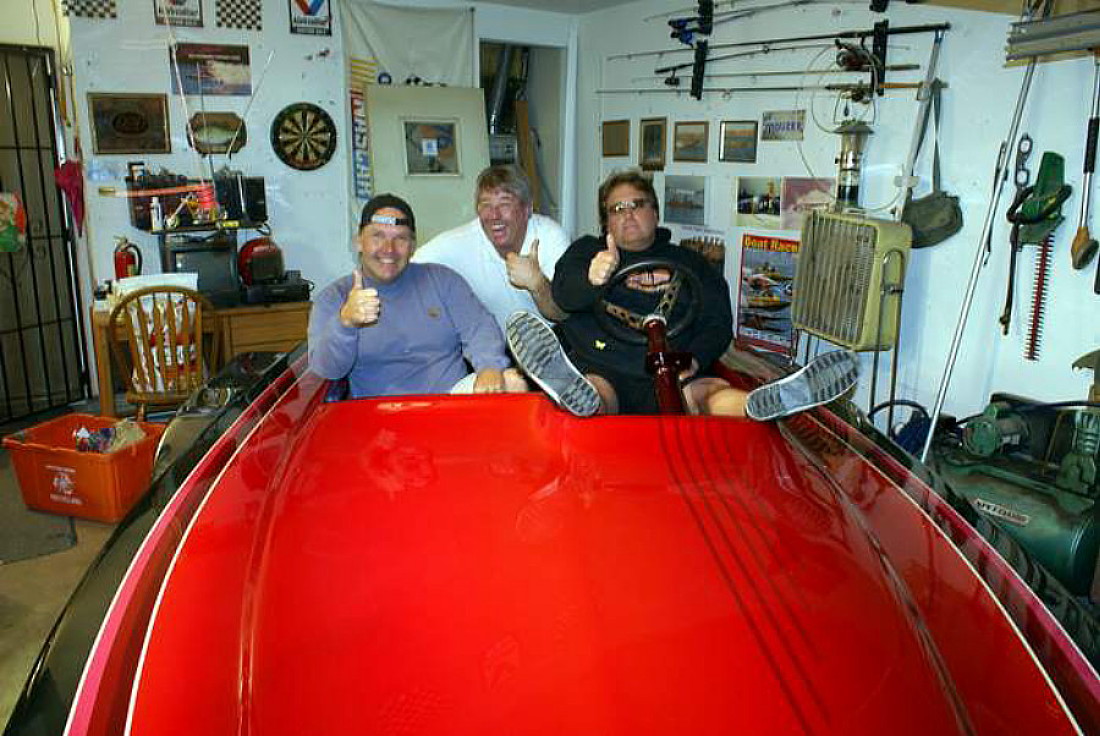 svlperry said:
He told me it’s going to be a show boat
Click to expand...

We're gonna float it for some pictures.

svlperry said:
From what Chuckie told me that boat will not get wet
Click to expand...

Another thing to consider,,,,
why would they bother with a progressive throttle linkage if it's never gonna be driven?

I agree, it won't be raced. but I'm confident it'll get wet. 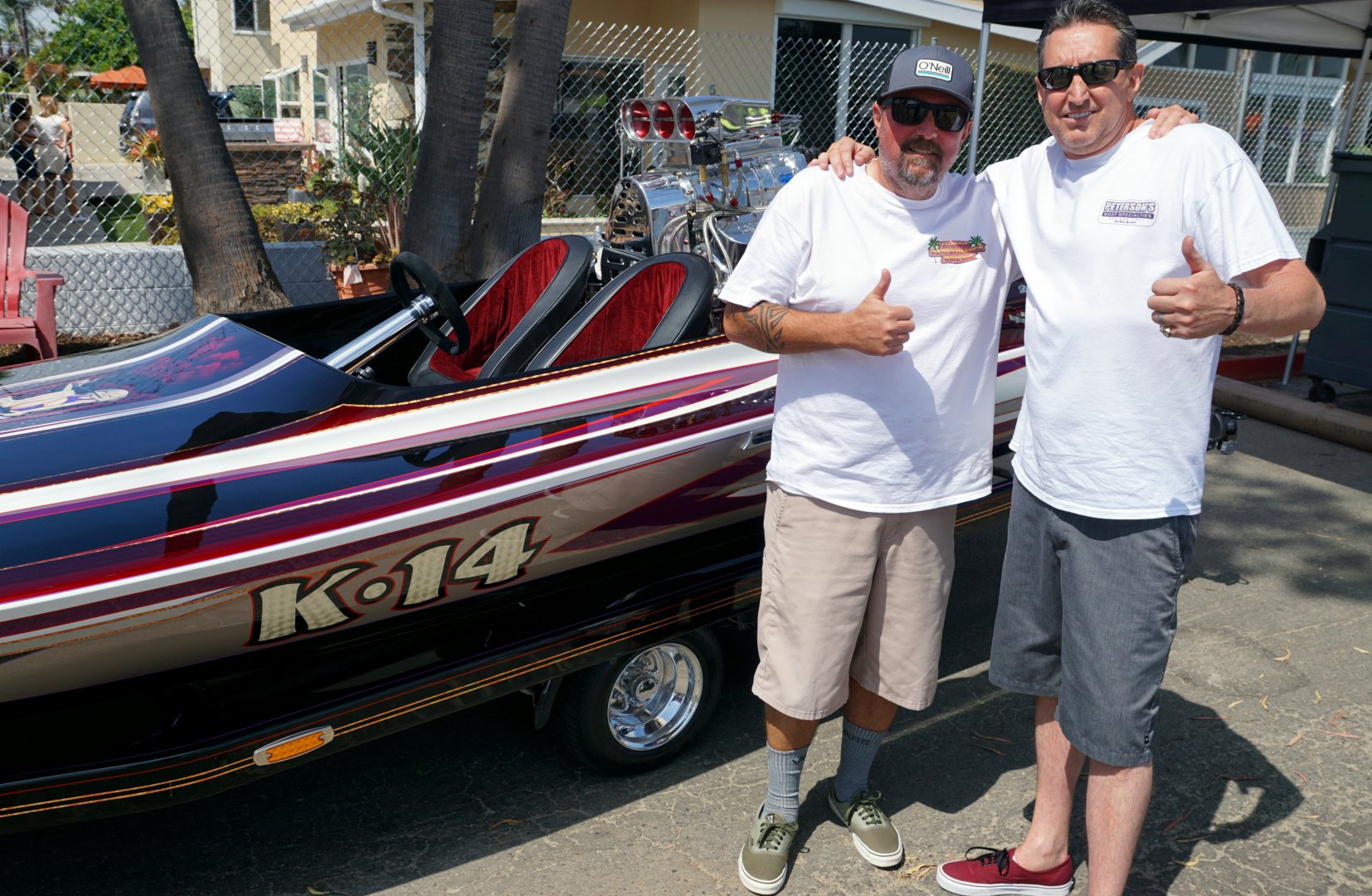 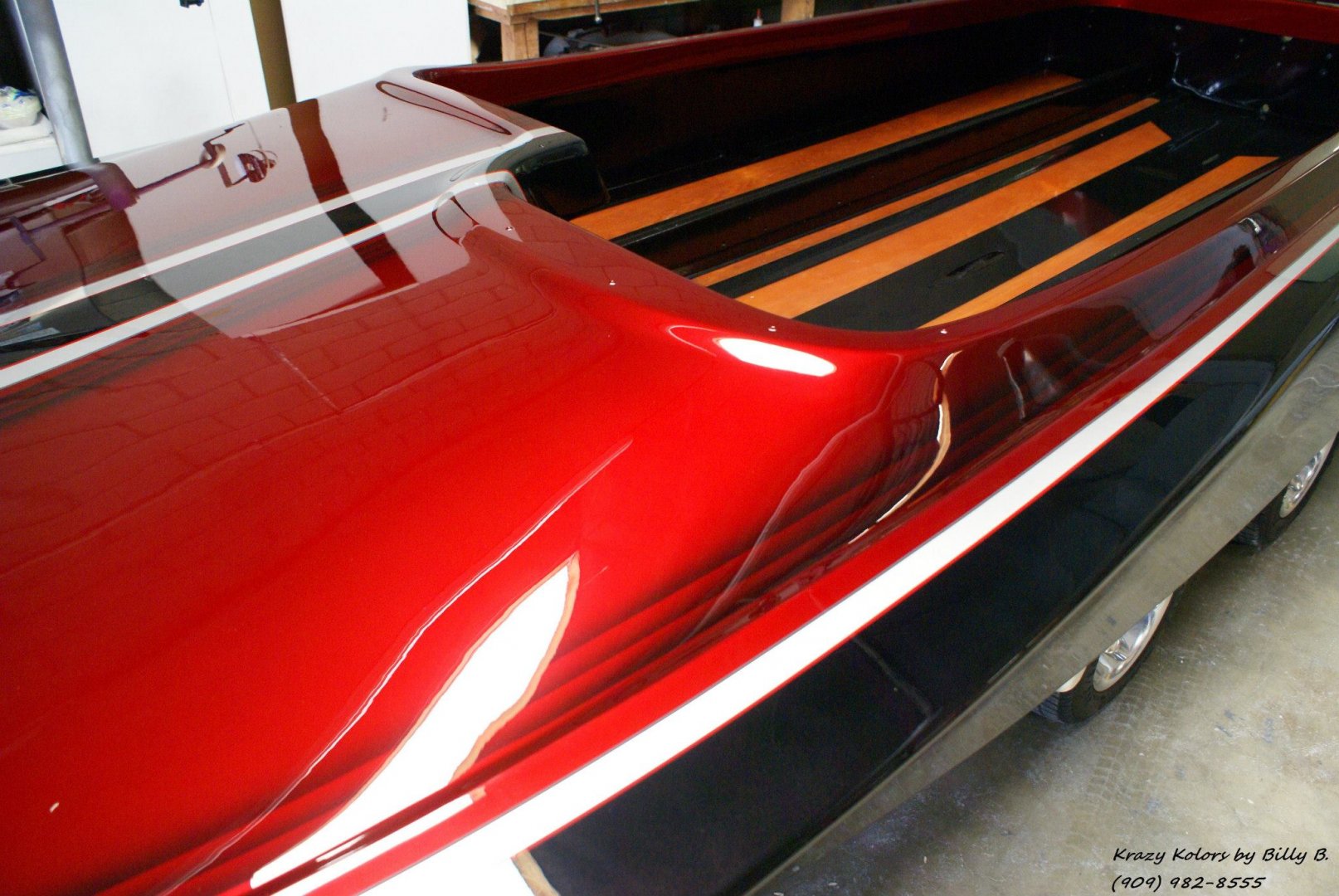 That turned gold pinstripe is what really set off the entire thing to me. Gorgeous paint, but that pin stripe is what immediately grabbed my attention. To me, details like that, that pop so much that they draw your eye in is a real testament to the overall work.

Sure miss those days 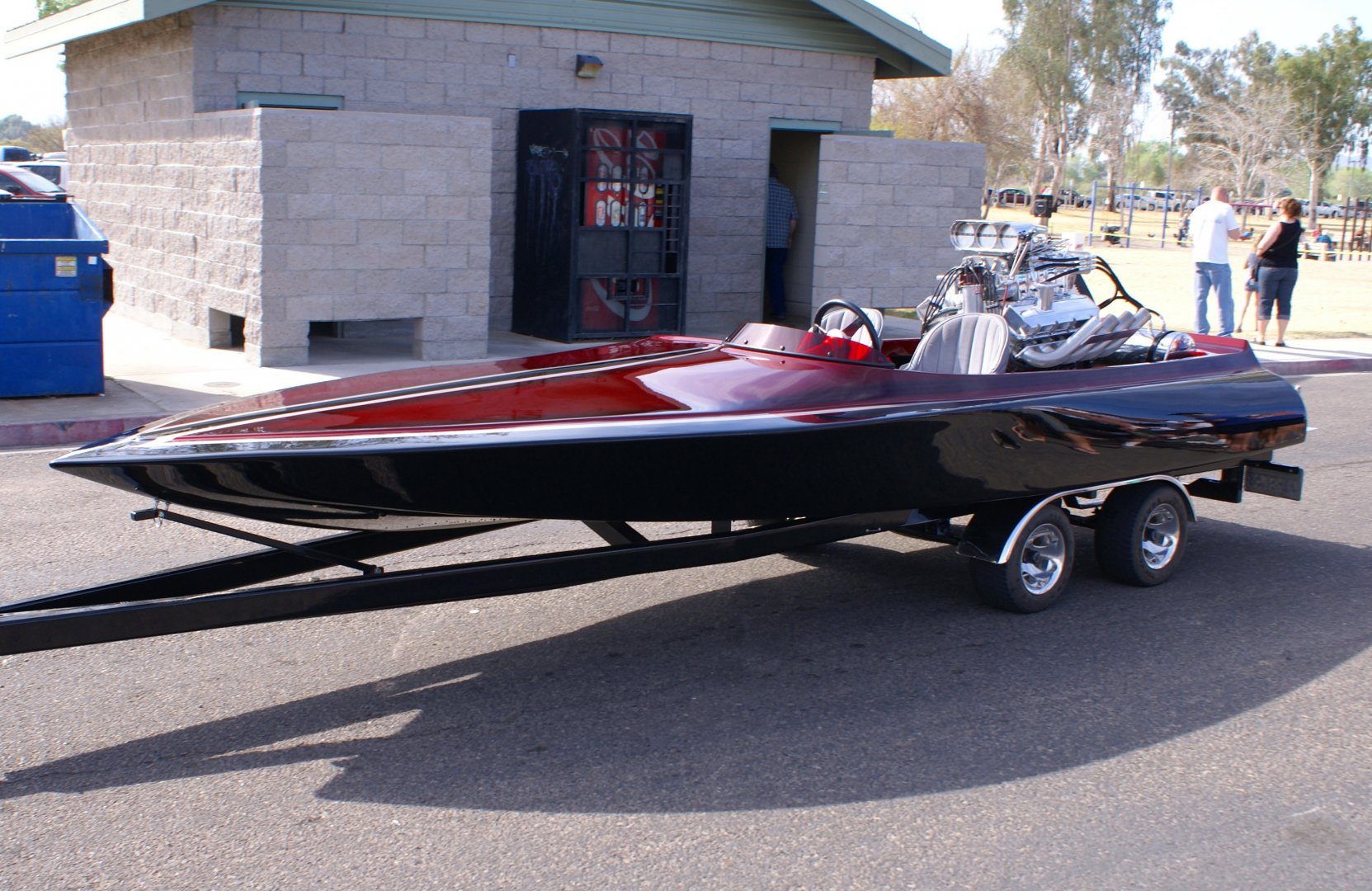 Man in the Box

I have these foot pegs in my garage if you're interested. Got them for the Tuff then went a different direction.