JT’s Social Bar screams speedboat central, and for one wicked weekend every May, the La Quinta parking lot below looks much the same, morphing into an annual mini dry-pits when the offshore racers and their marine merchandise roll into town for the Thunder on Cocoa Beach season opener.

For proprietor-turned-powerboat-racer J.J. Turk, having the showdown in his hometown means each year he’s called upon to do double time – both caring for his guests on the property and tearing it up on the pro course. The California native, with roots in Ocean Beach, gives thanks to Perdition Offshore Racing for opening up the world of offshore to him in 2012 after La Quinta sponsored the team with a block of rooms. What began with an unexpected post-race invitation from Brian Williamson to fill the Perdition pilot’s seat, blossomed into a testing session in Salem, Mass., backed by a second place podium finish during his debut race at the Key West Worlds that November!

The wheel of the 34’ Phantom might have been new territory but the navigational game came as second nature. At five years old, J.J. was already steering the family’s boats and cars helping out his father who suffered from a blinding genetic eye disorder, and by age 13, he was moving semi-trailer trucks and heavy equipment.

Bit by the offshore racing bug, J.J. went on to purchase veteran racer Steve Kildahl’s Phantom and in 2015, No Vacancy Offshore Racing premiered under the La Quinta entrance canopy and TV figure Travis Loftland from “America’s Deadliest Catch” appeared on the sticks. After a short stint in Class 4, the next year when No Vacancy was no more, a new dual Phantom feat was on the horizon including a reunion in the Perdition cockpit, and seat time next to none other than the creator of Phantom Boats, Will Smith.

Expressing his admiration for what Smith has accomplished with the V-bottom powerhouses, J.J. confers about his keenness for commanding Phantoms, “Will is one of the first people I met when getting involved in racing. He has always been an innovator. His boats are hard to kill and only know how to win. To have the opportunity to run with him in his original canopied 32-footer Mr. Technology was a legendary experience.”

After hopping in with Smith, J.J. then popped back in Perdition Offshore Racing with Williamson to bring home the 2017 OPA world championship, before taking a break to focus his attention on work and the opening of JT’s Social Bar. In 2019, he resurfaced raising the black and white checkered flag on his home turf next to Robert Winoski in Bronx Phantom. Extracting an even bigger grin for the Cocoa Beach resident – the win coincided with the grand opening of JT’s Social Bar. Today, after fast forwarding two Orwellian years to flatten the bioengineered Kung-Flu curve, the sports bar is booming and J.J. is zooming around with expert throttleman Michael Stancombe in his fifth Phantom Team Woody.

The Texas-based Woody Offshore Racing Team co-owned by Billy Shipley and Chad Woody is one of the largest outfits out there. The four-boat fleet competes throughout the speed-capped Bracket classes, and in addition to the Phantom includes: the Class 3 2019 OPA world champion title holder 35-foot canopied Fountain that Shipley and Woody race together; the 28’ LaveyCraft; and the Nitra 22 SS powered by a single Mercury 300R (currently being rigged by Shaun Torrente at STR Racing and soon to be on the course). What makes the new Nitra addition all the more special is that J.J.’s 15-year-old son Cameron Turk will be commanding the Class 7 orange head-turner with fellow racing comrade Robert Bryant! 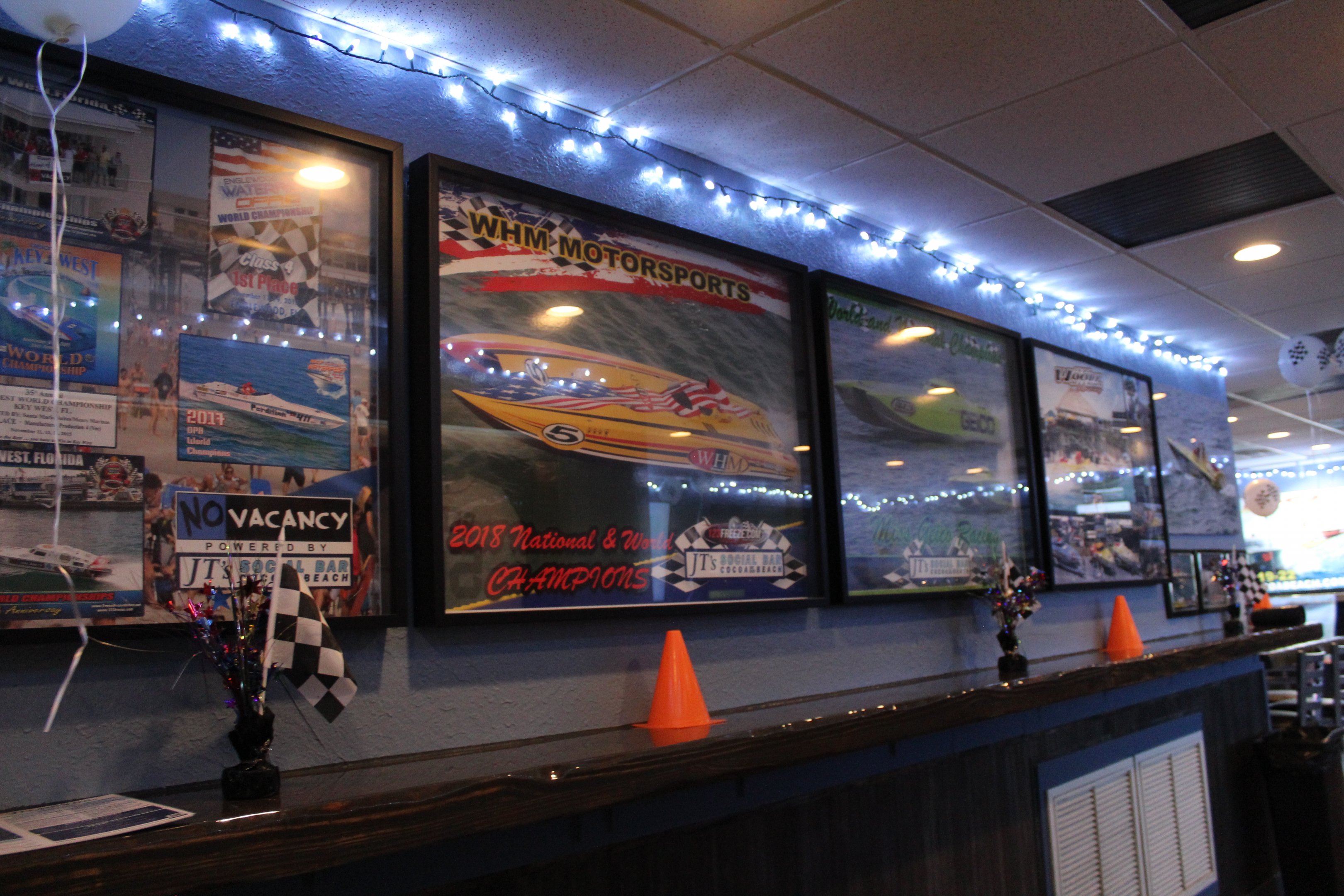 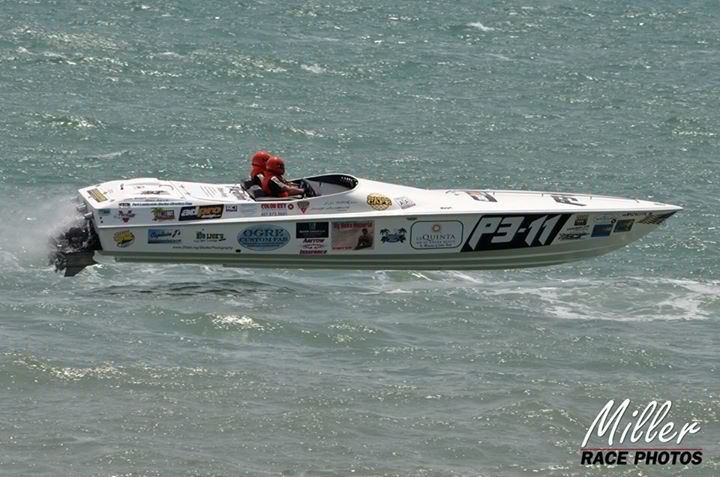 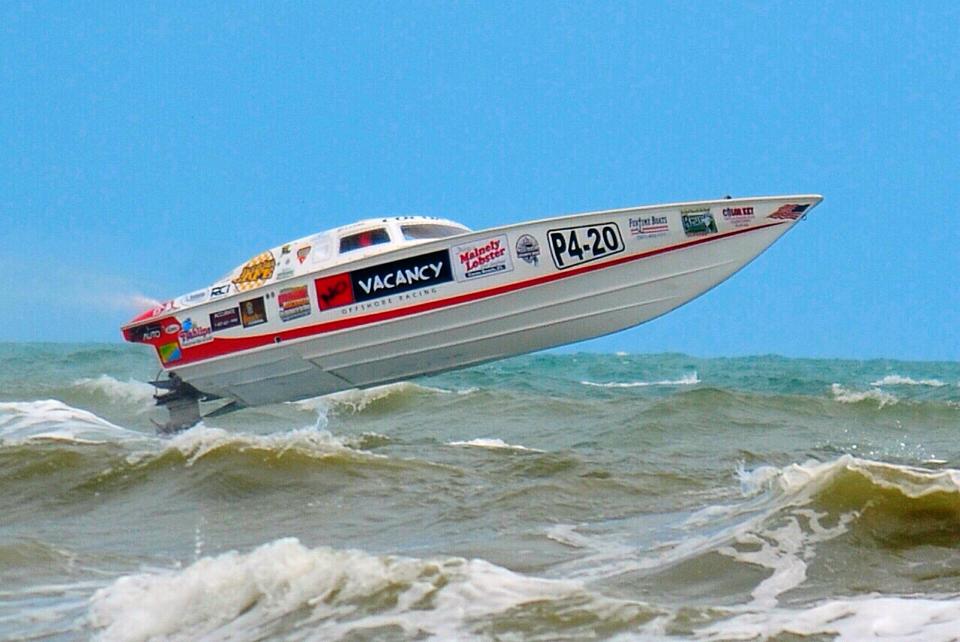 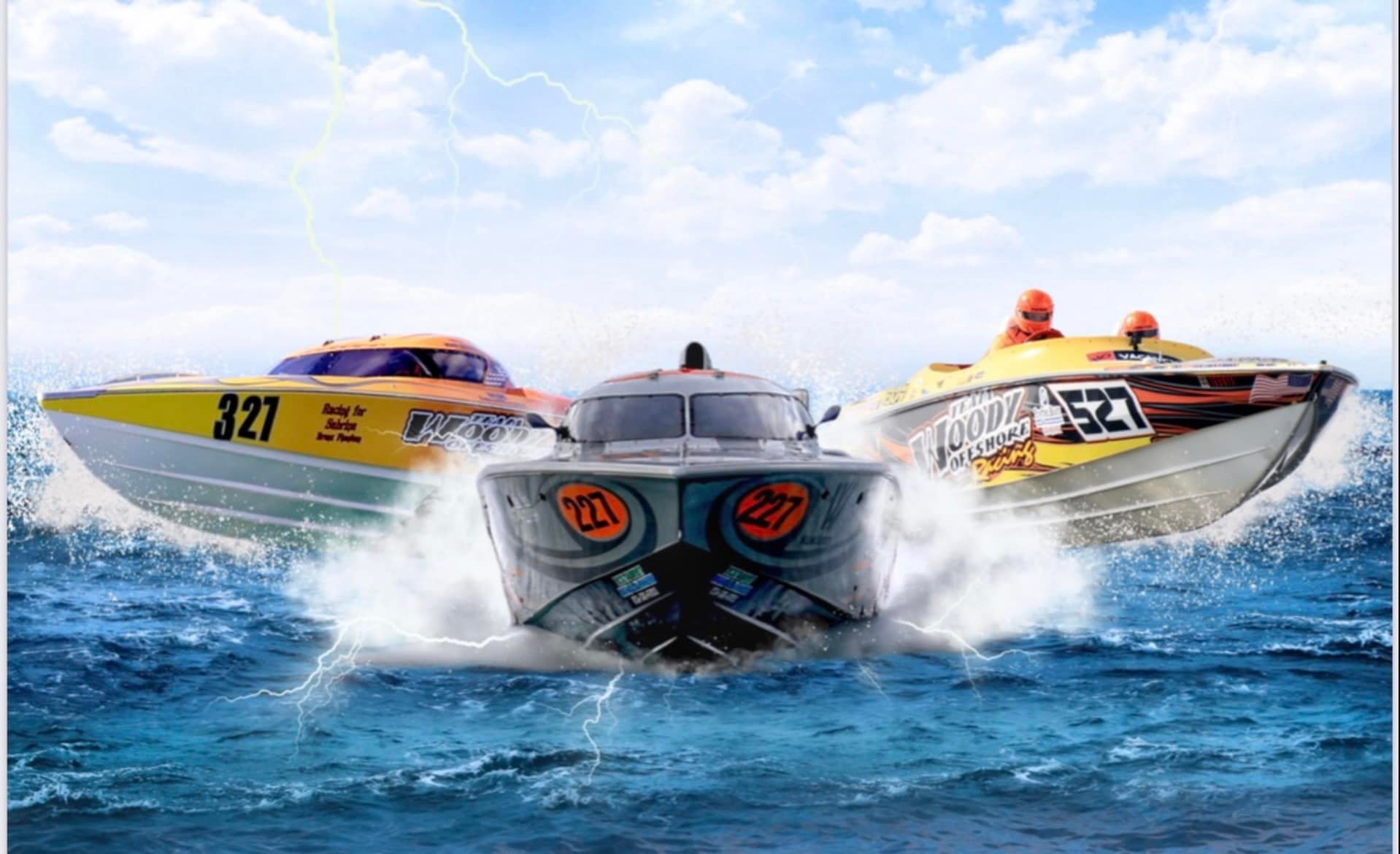 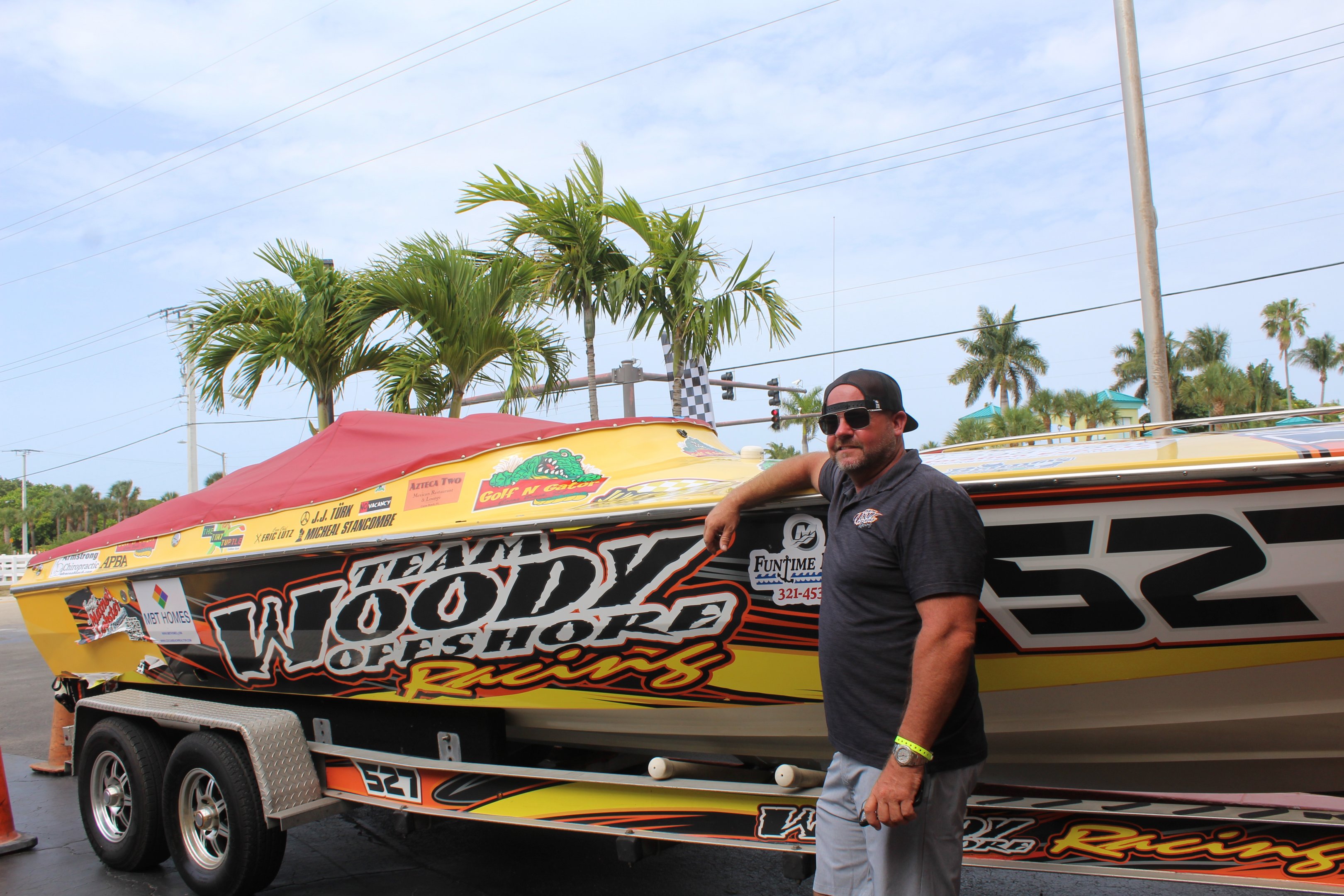 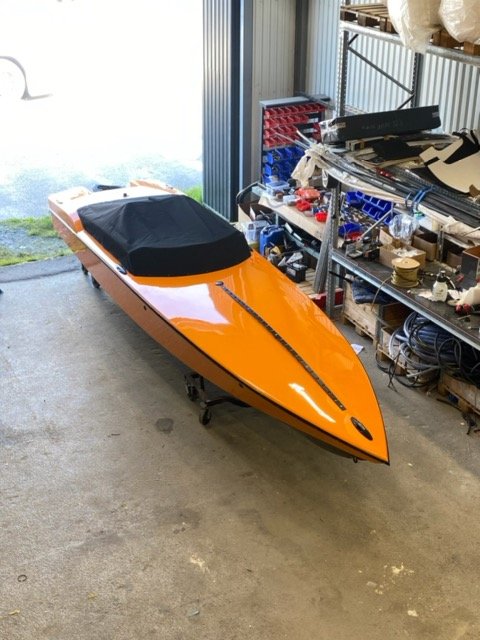 The Original 30’ Schiada​
When not manning the Phantom helms professionally during the last decade, J.J. could be found pushing the throttles of that special vessel mentioned in part one, the original edition 30-foot Schiada. The 1980 model, in which he and his family hold the keys to, was made for founding father Leonard Schiada himself.

Schiada's excellence in craftsmanship and uncompromising standards set the tone for the mythical, marvelous and habitually back-ordered 21-footer, which to this day, retains its bulletproof, badass reputation whether running recreationally or in race mode. It’s been said that Schiada stretched the 21’ mold for the birthing of its bigger siblings – of which, apparently only three were constructed prior to Lee Spindler purchasing the company.

With regard to the original trio, from my research and that of the owner J.J. Turk, we’ve heard but cannot confirm hull. No 2 is still kicking around the San Diego area, and hull No. 3 succumbed to a race crash and sank. What’s more, it too has been mentioned hull No. 1 hit the competitive aquatic track and that powerboat god Bob Teague from Teague Custom Marine had his hands in the engine compartment back in the olden days. When Leonard decided to let the boat go, Alan Johnson, an automotive and boating enthusiast who owned a large Porsche Audi dealership became the second owner, and third in line were the Turks.

J.J. reminisces about the amusing and unforgettable childhood tale as to how the sale transpired, “My dad owned a car lot Bay City Imports in San Diego and would buy used vehicles from wholesale managers. One day while he was in the middle of making a deal for some Porsches, I was bored and wandering around the property as any 12-year-old kid would do. I spotted this cool Suburban and Schiada parked out back and spent a good hour looking at that boat. Then I remember running back inside yelling, ‘Dad, you must come check out this guy’s set-up.’”

He finishes with, “After getting scolded at for interrupting the transaction, the next day I came home from school to find the Suburban and Schiada in front of our house.” “Get in, we’re going for a test drive,” said my dad. The ride went well, and for $33,000 the fairly new Suburban, Schiada and trailer were turned over to Big John Turk. The deal that went down that day was even better than expected. When Johnson returned to town, it was revealed the car salesman had made a mistake. The price did not include the Suburban… but the sale had already been finalized. 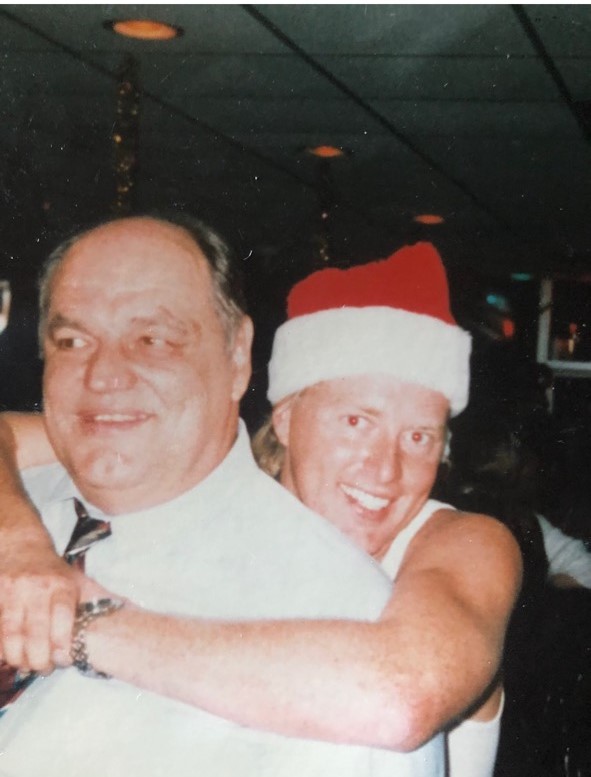 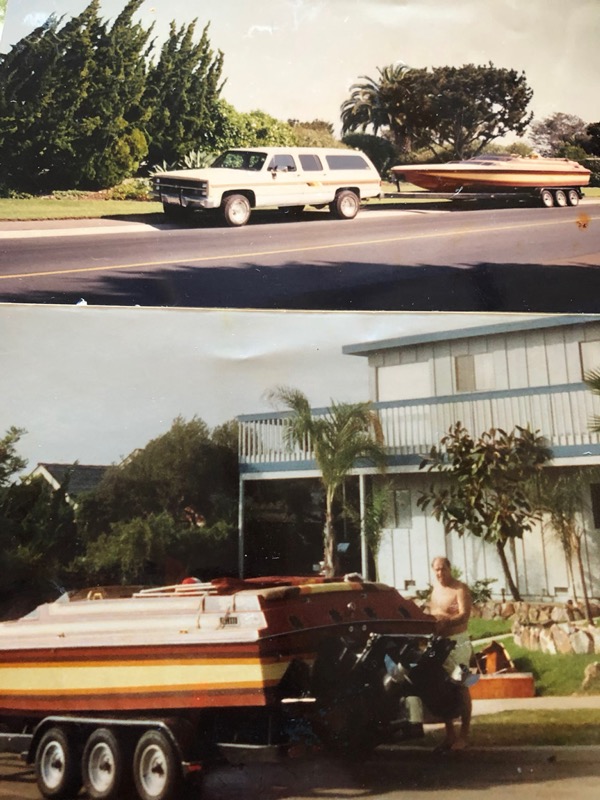 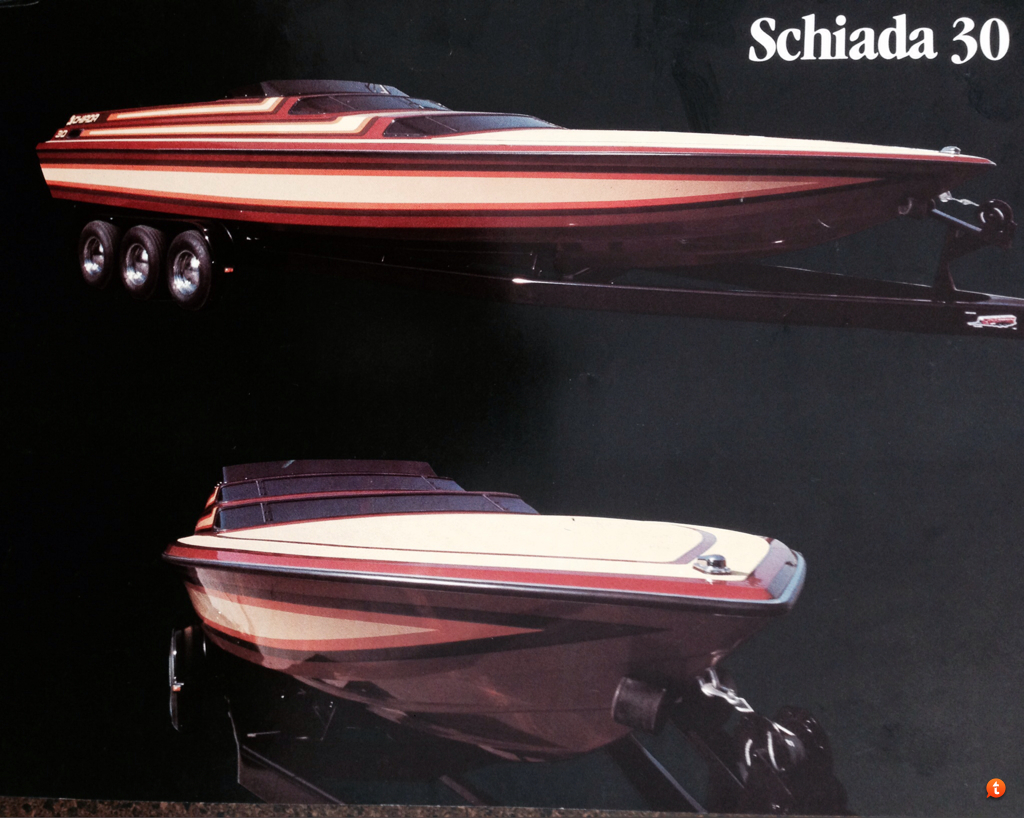 At that point, the Schiada sat in hibernation for a bit of time in a barn on the Turk’s ranch in Dulzura. Fortunately it was moved prior to a devastating set of fires that swept through and burnt down the ranch in 2007. Around the same time, a mutual friend of both Johnson and the Turks called upon Tom Russell, an E-5 Navy Sailor stationed nearby who was a skilled maritime mechanic, to make right some of the wrongs from when Johnson owned the boat. Instrumental with his fastboat fixes and brining the Schiada up to speed, a few months later Russell met the Turks for the first time at Peohe’s Restaurant at the Coronado Ferry Landing, and from that day forward, Tommy became like an adopted son to the family.

In chatting with Tommy at JT’s while taking notes on a wad of bar napkins and praying I would remember all my scribbles (I didn’t I had to call him in San Diego to clarify), I sensed his high regard for the early Schiada as he said, “After making the repairs, there was nothing like driving around the Coronado Cays at night with moon shining bright. That day when meeting Big John, I volunteered to fix it for free for life just to be able to drive it. It’s a beautiful hull and rides on air, and with the exhaust coming through the props, it wasn’t even super loud.”

He pressed on with his poetic powerboat prose, “The 30’ Schiada was an experiment ahead of its time, if you look at how it compared to other high-performance boats back then like Cigarette, Formula and Scarab. It had a different sheer and the low deck made it more aerodynamic, plus the small blocks made it an easy boat to trim up and fly just right.”

Before the Turks finally brought the boat to Florida where it underwent a full restoration, Bob Leach from Eliminator was tasked with cutting the bow out prior to neighbor Paul’s Upholstery doing the interior. As for the re-rigging project, J.J. explains, “It took five years but all the wiring, the upholstery, the gas tank… everything was redone. Originally it had factory Mercruiser power in the ‘80s, but I modified it to small block Chevy 383 Stroker engines and upgraded the TRS drives to Bravos with no transmission to make it more efficient.”

These days, the Schiada flies all over Florida waters to the magic mark of 75 mph, while time spent out of the h20 for improvements takes place at Bruce Baker’s DeLand-based Express Marine Engines. Turning heads where ever it ventures due to the fact you just don’t see Schiadas out east, it’s quite the show-stopper among other high-performance pieces. 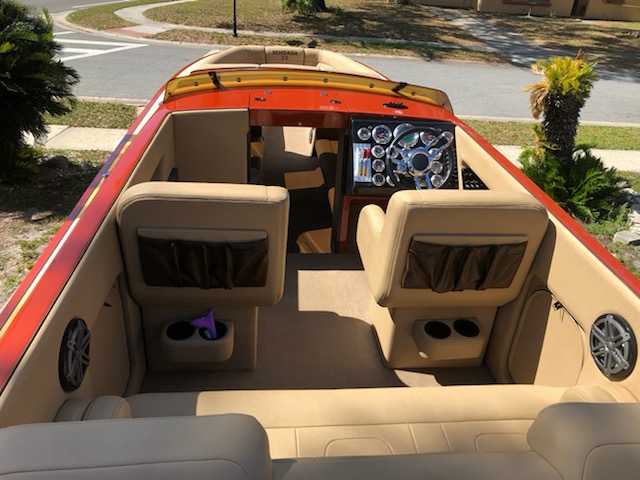 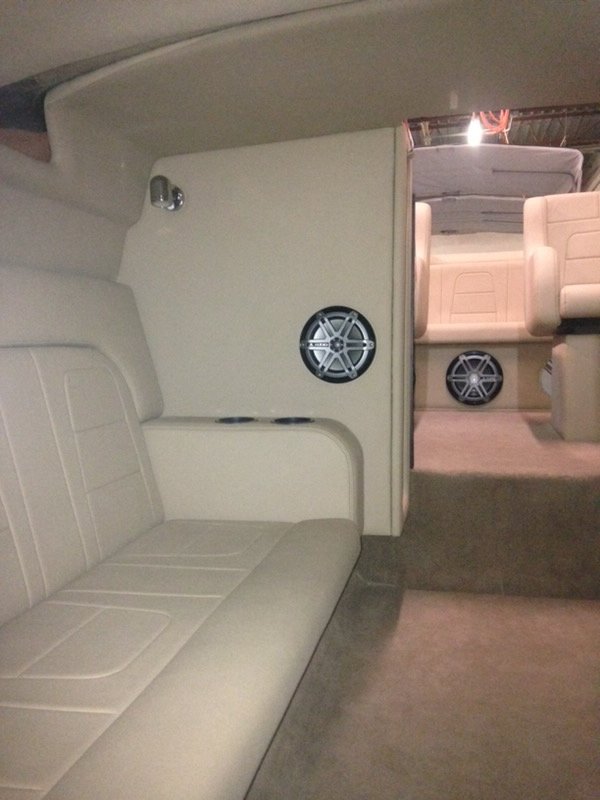 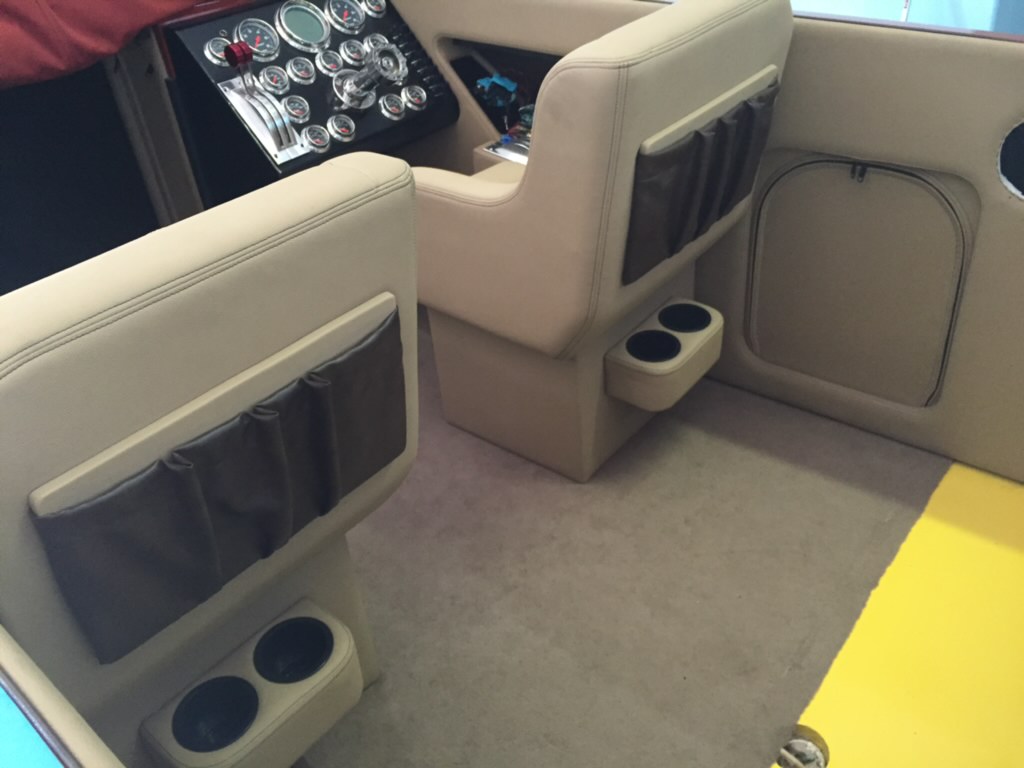 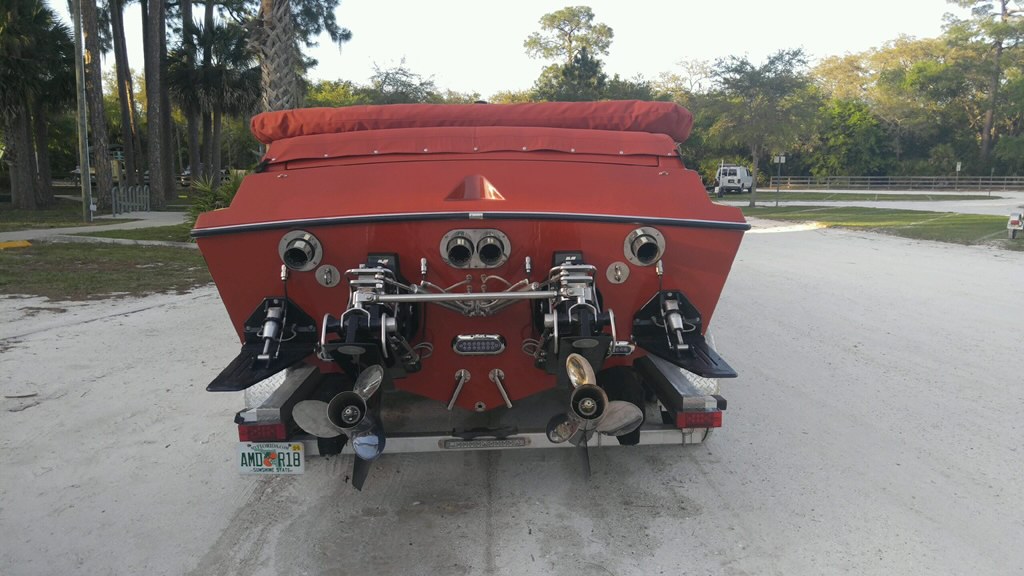 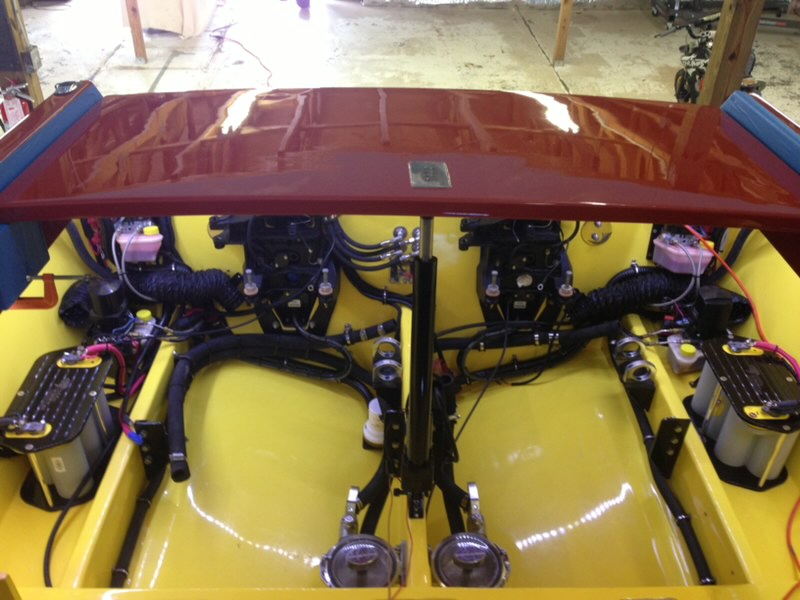 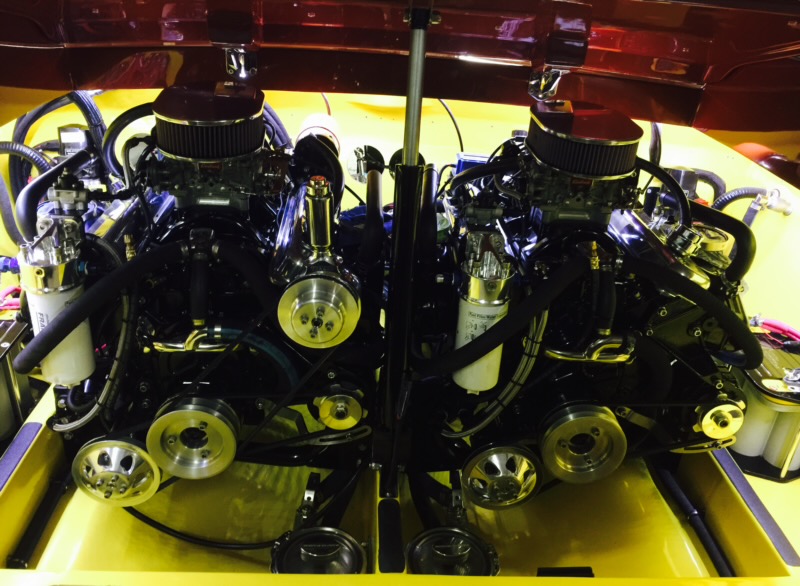 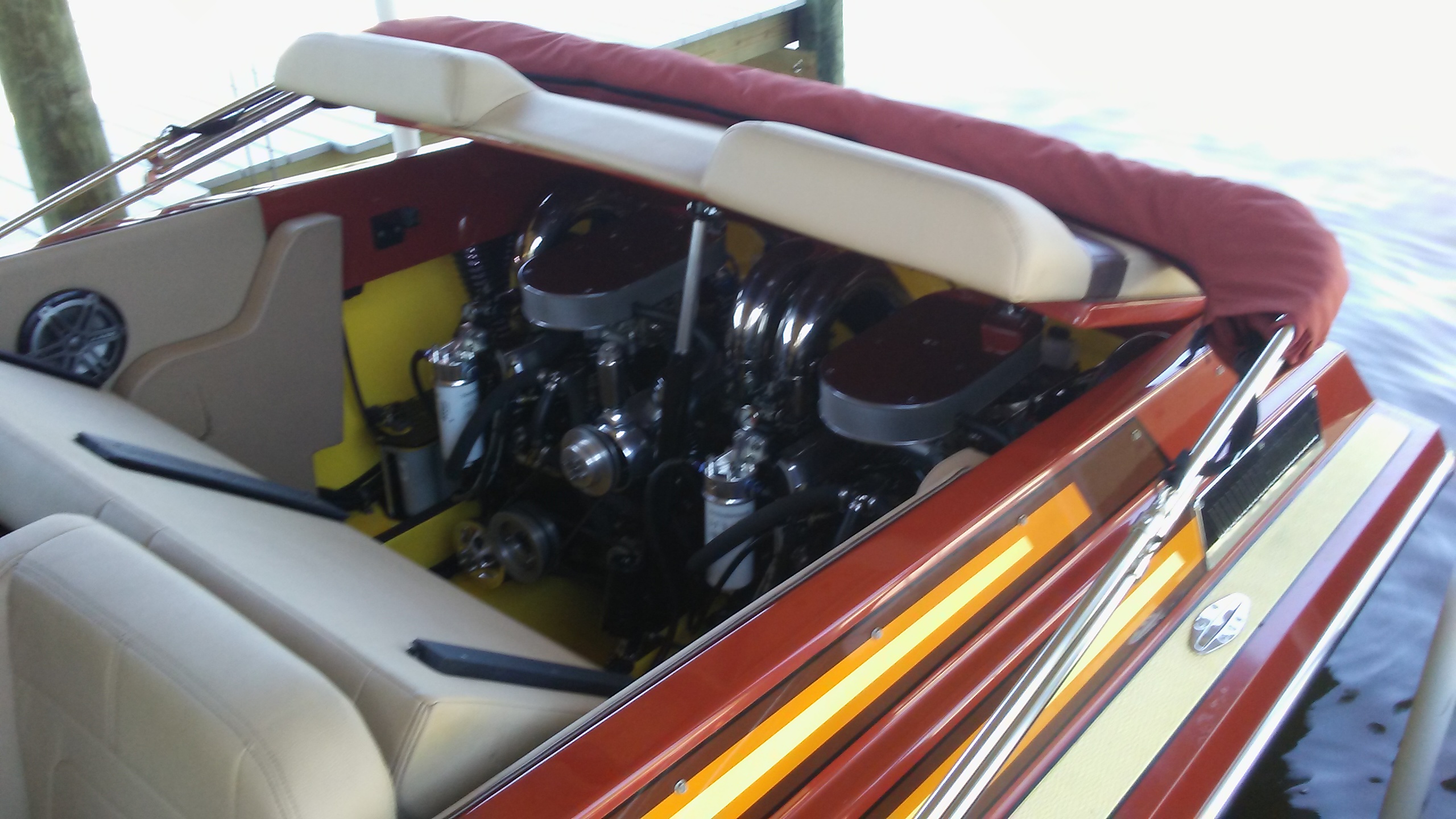 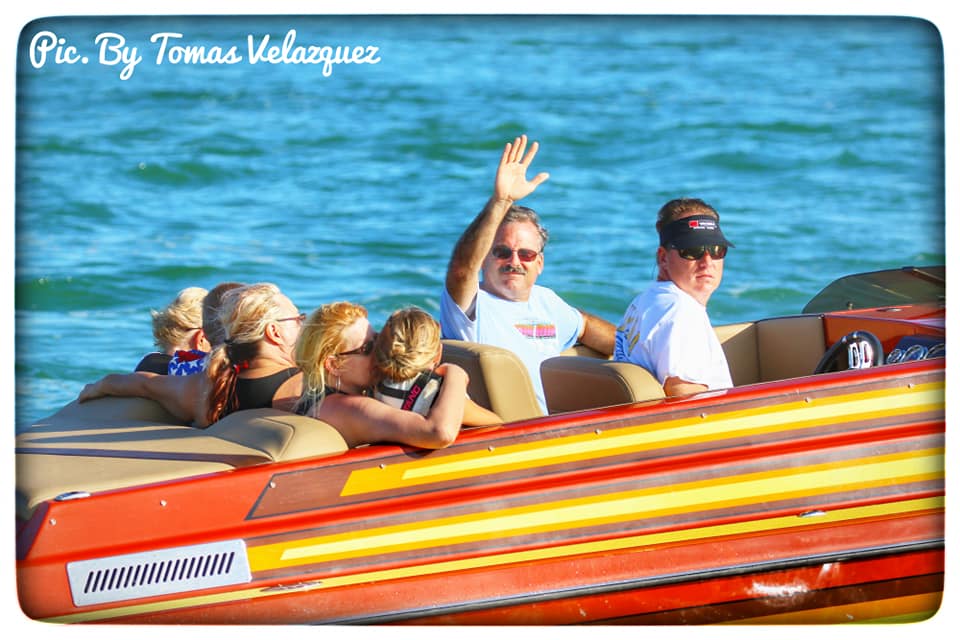 Note: The early Schiada history before the Turks purchased the boat is based on hearsay from speaking with various people. If anyone has any concrete details to add, please share in the comments section, as the Turk family is very interested in knowing the specifics as to the boat’s past details.