32 Doug Wright by Maxed Out Marine

So here is a build that was finished end of 2021. Boat is a 2022 32 Doug Wright by Maxed Out Marine here in Lake Havasu. Ricky was nice enough to sell me one of the builds

. Ricky set up a nice collaboration with some of the best in the industry imho. I just wanted to build something clean and simple not loud and somewhat timeless and I think we all achieved that in this build.


So let’s get started, boat is officially alive! Doug Sr and crew mating the hull and deck together. These guys finish work is something else. They spend tons of time making the hull perfect as far as lines which you will see in finished photos. 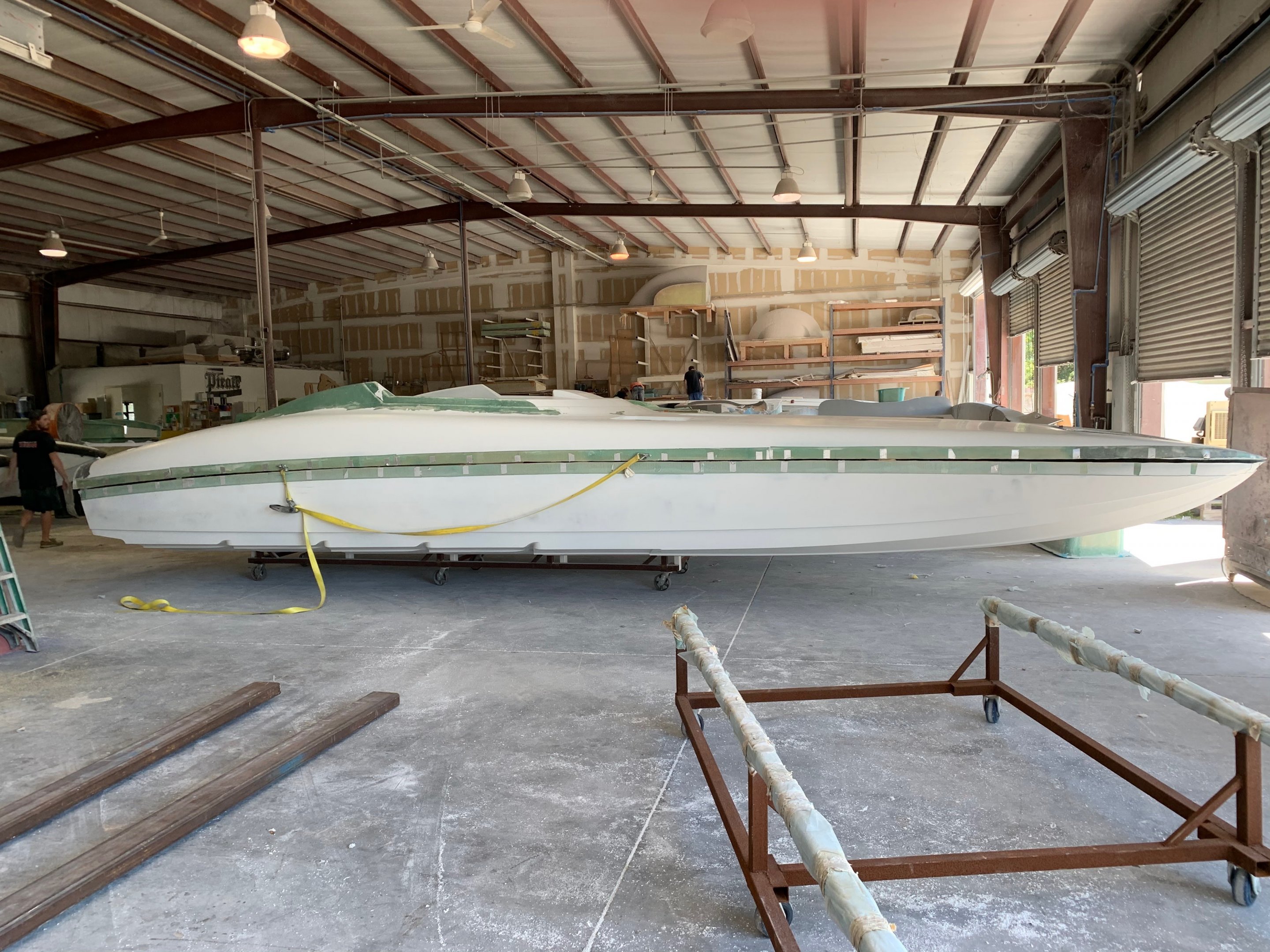 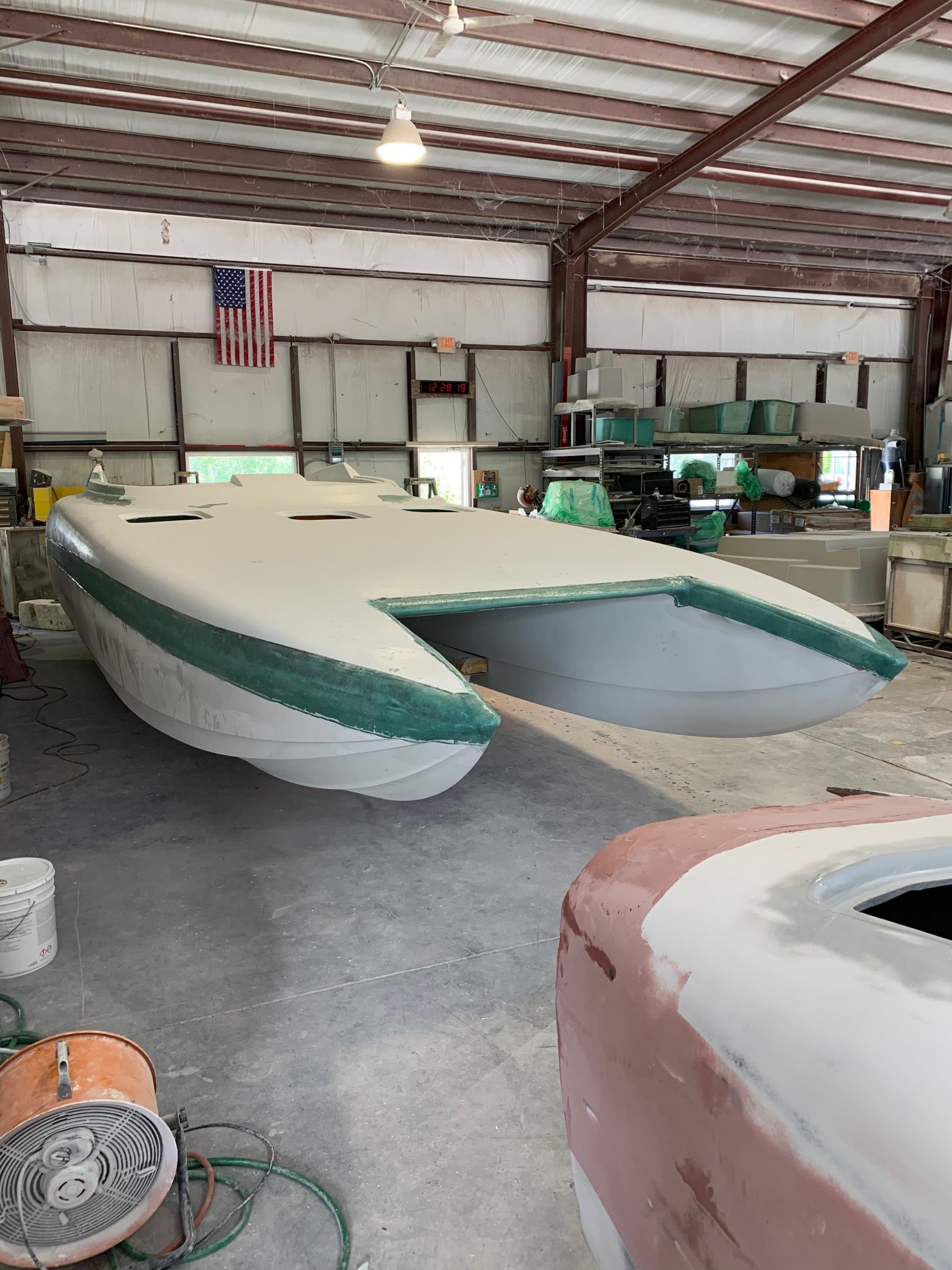 Once all the body work was done boat was shipped to Doug Harrell Designs for paint. If you know DHD work you will know some of the badass work he does. This project was not challenging for him by any means but I wanted to keep boat simple. I told Ricky I wanted a semi pearl white to match my truck with a black bottom and transom to give it a storm trooper look. I was a little worried about it having to much pearl but it came out perfect.

When Doug was finished with paint boat went to Grant's Signature Racing for rigging. Who better to rig a DW then Grant's, his knowledge and relationship with Doug are great and Grant knows these boats better then anyone. Ricky asked me what I wanted to do for electronics, steering, stereo and handled the rest with Grant's. I only had two other requests, one wanted all the hardware blacked out and asked Grant's if he could install some diagnostic ports under the dash to make it easier if we needed to water test and have a lab top connected in the future. Grant explained that blacking out the hardware will take a little bit of time since he had to disassemble everything and send it out then reassemble it which wasn't a problem. Once we ironed out the details he went to town, he runs a tight ship and does not hesitate to get things done. Here are some pictures of the rigging process from them. 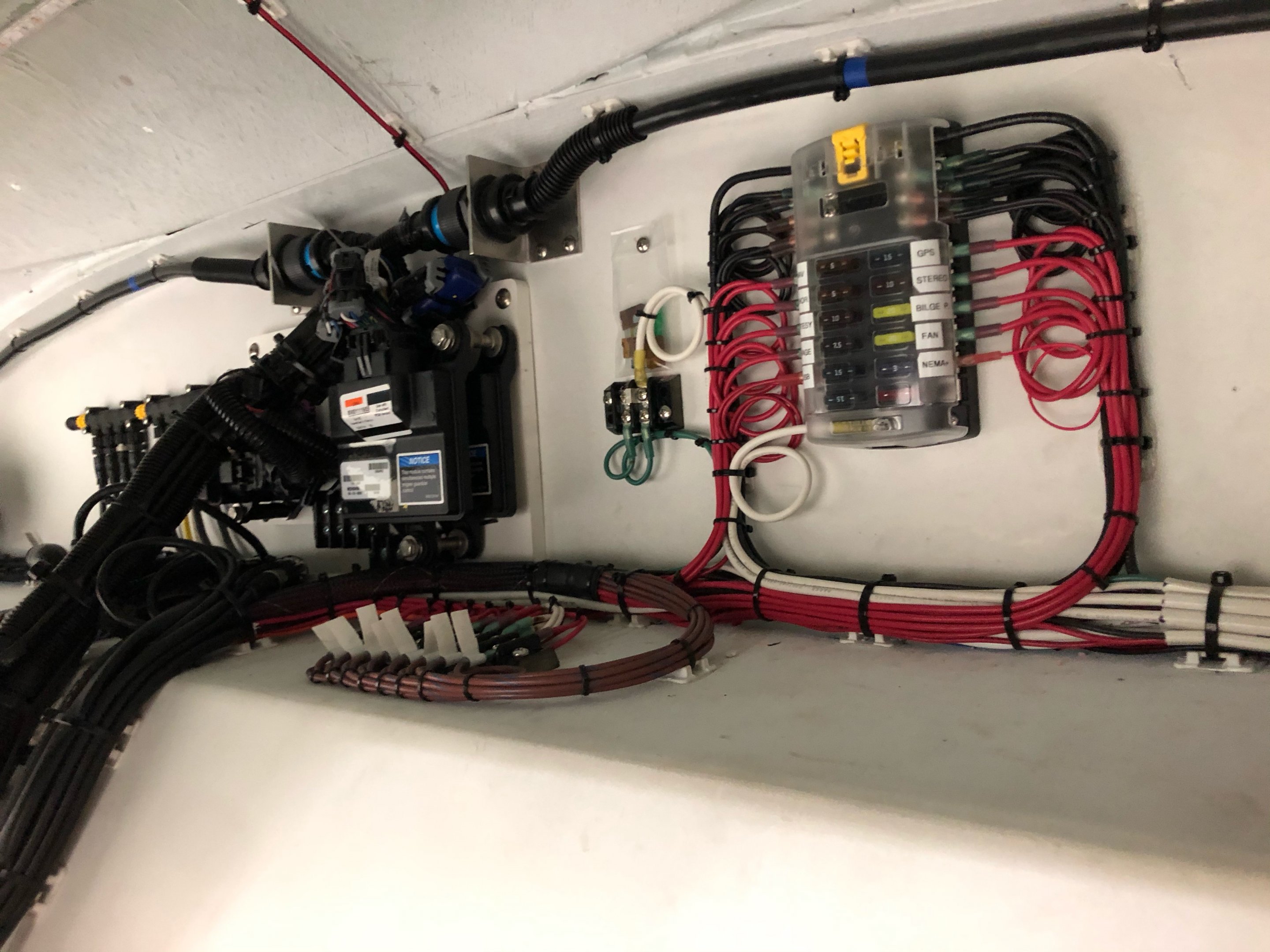 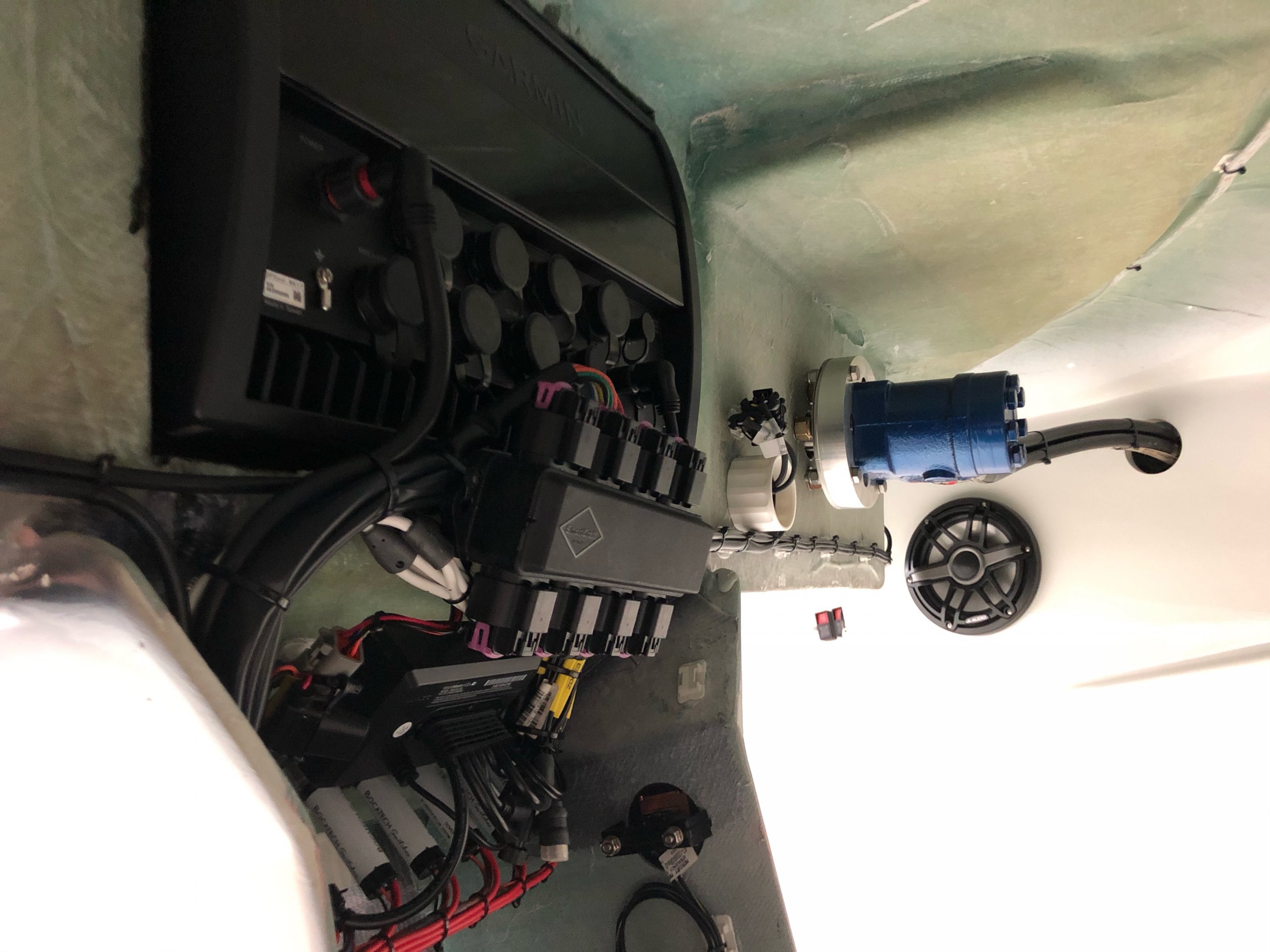 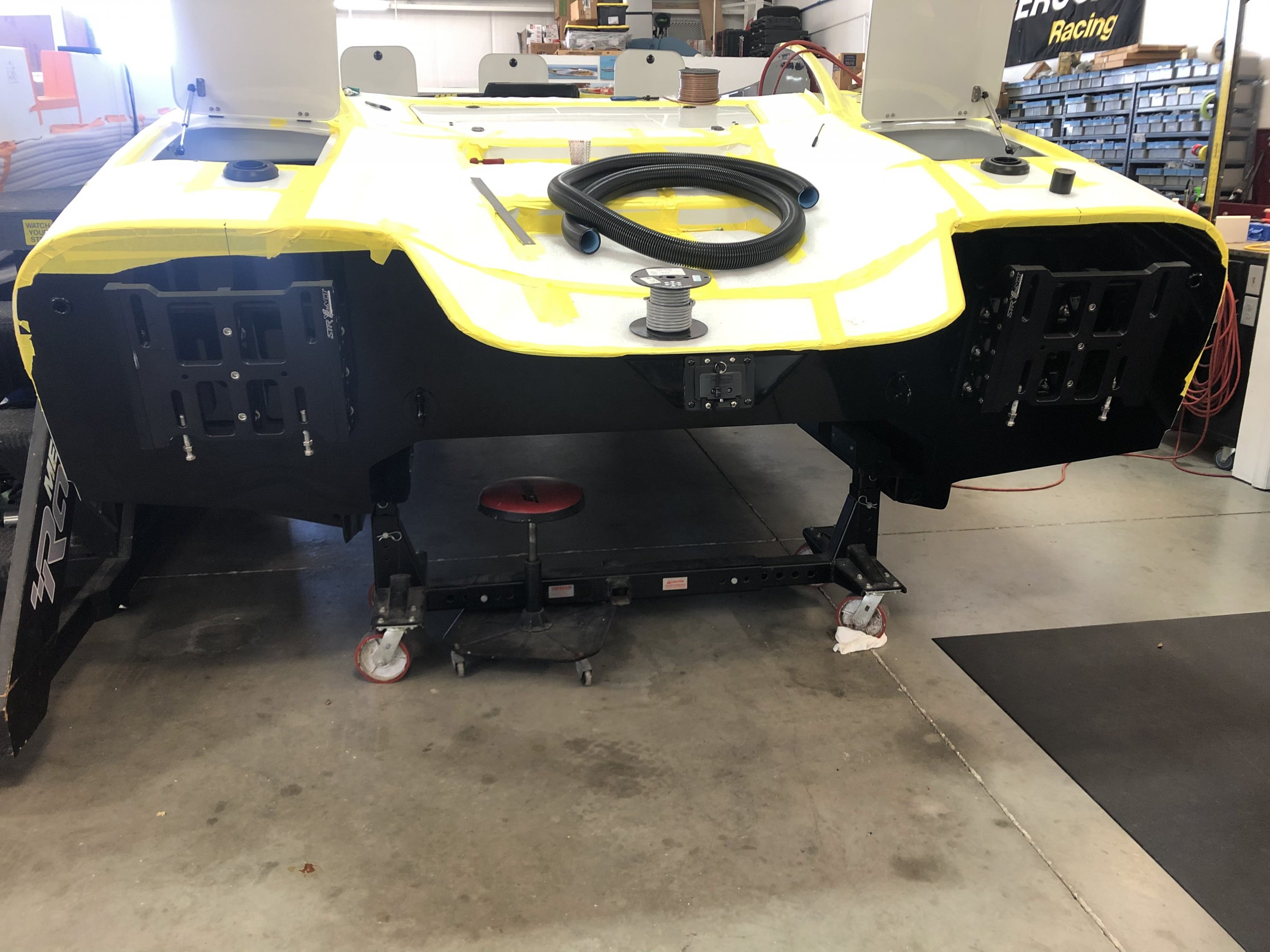 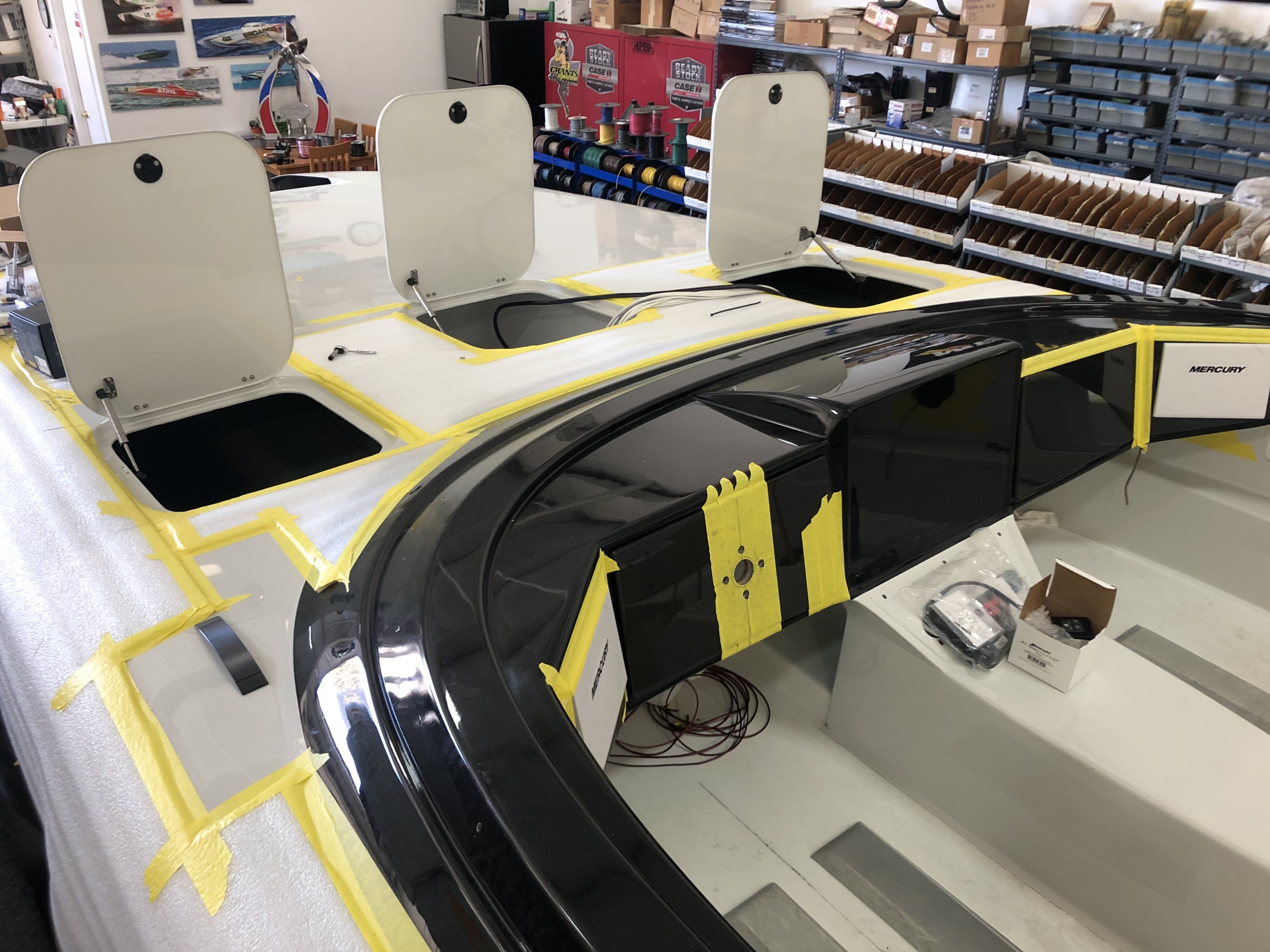 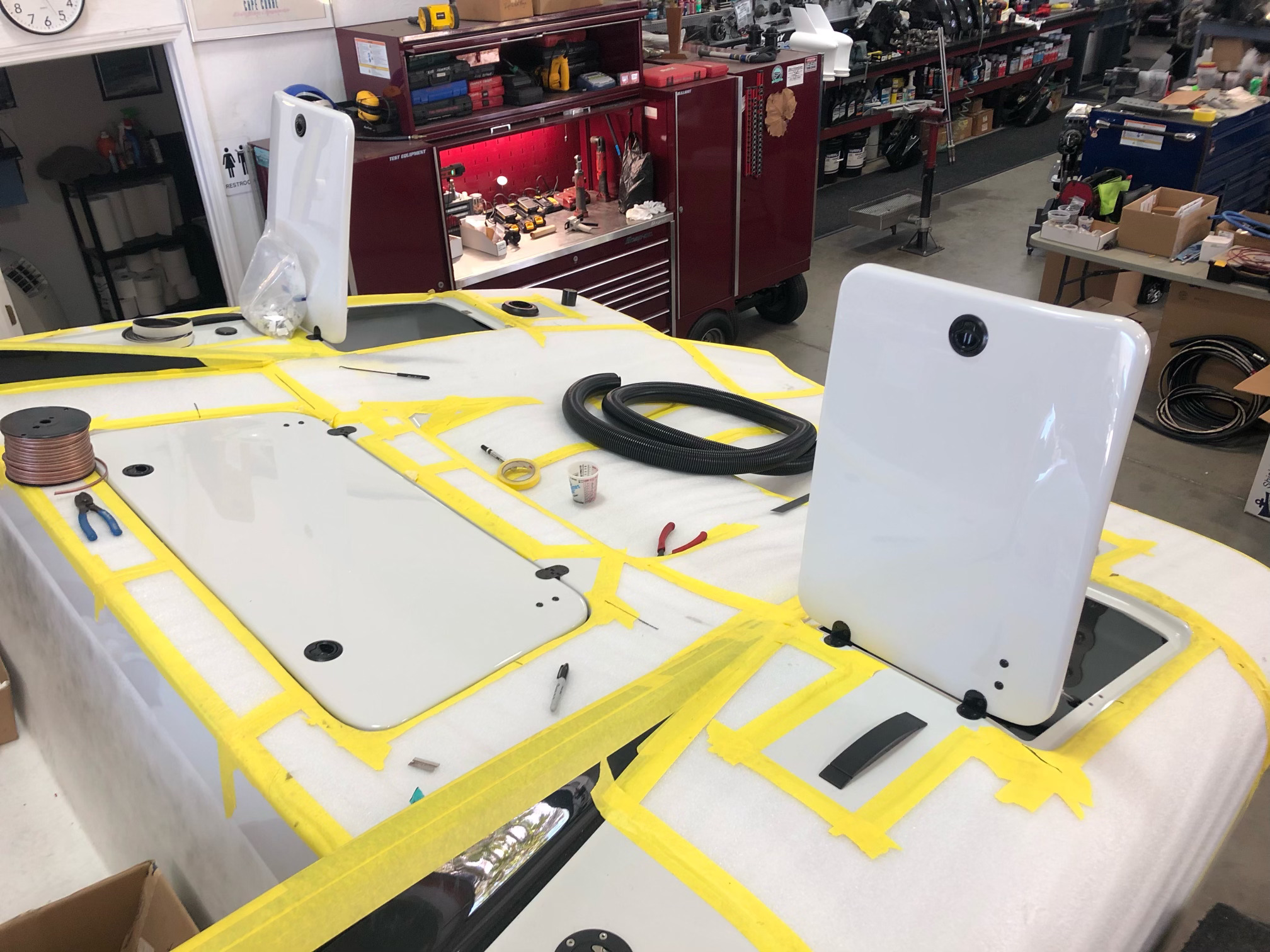 Last order of business with Ricky was what motors to go with. I was going back and forth between the 400r and 450r to be honest. I've spend time in both configurations with Bullhead Bully and they both ran amazing and you couldn't go wrong either way to be honest. I fought it for awhile but eventually ended up ordering the 450's and good thing I did. It was the start of Mercury's back log and my order got delayed 3 times due to demand and covid production issues. No problem, motors showed up finally and within 24 hours Grant hung them and water tested the boat to make sure everything was good to go. He called Ricky gave him the green light and boat shipped out to it's next stop, Unique Upholstery in Gilbert Az.

Another awesome company Ricky collabed with, if you don't know who Unique is look them up! They do all kinds of custom work from hot rods to boats for all kinds of customers from someone like me to guys like Dan Bilzerian. Scott is awesome to work with and loves what he does and seems to be excited with every build he does. I was able to meet Scott in Havasu when he finished a red 32 DW for Ricky that he was getting prepped to sell. We climbed into the boat and I told him what ideas I had and he shared some of his. I told him aside from a couple of certain things to go ahead and run with it. He knew I wanted something simple, not to busy and somewhat timeless? He said no problem and when he got the boat he got to work. I won't put any build pictures just finished product.

Scott finished with the boat and boat got shipped directly to Barrett Marine. AJ was in Lake Powell for the Powell event but let the crew over there know boat was in route and to give it a once over before we dropped it in the water. Aj and the crew at Barrett have always been awesome to me and can't thank them enough. Boat showed up and the crew hooked up water and fired everything up since it had been a couple of months since Grant ran it. After everything checked out it was finally time to drop it in the water.

Water test went great! Boat ran flawless out of the gate and needed zero adjustments! In regards to outboard cats I just don't see it getting any better as a whole package, top speed, acceleration, handling, build quality.

After a nice afternoon test ride boat went to my buddy Ryan at Ryan Custom Detail. I met Ryan when he was mobile just starting and seen how hard he busted his butt back then. He is now working out of Vip Storage on the north end of town and is killing it business wise. Of course last minute call to him to get the boat washed up and as always he comes through. I dropped of the boat to him and came back the next day to pick it up to use it. Ryan is a perfectionist and doesn't do your normal wash, he goes above and beyond. 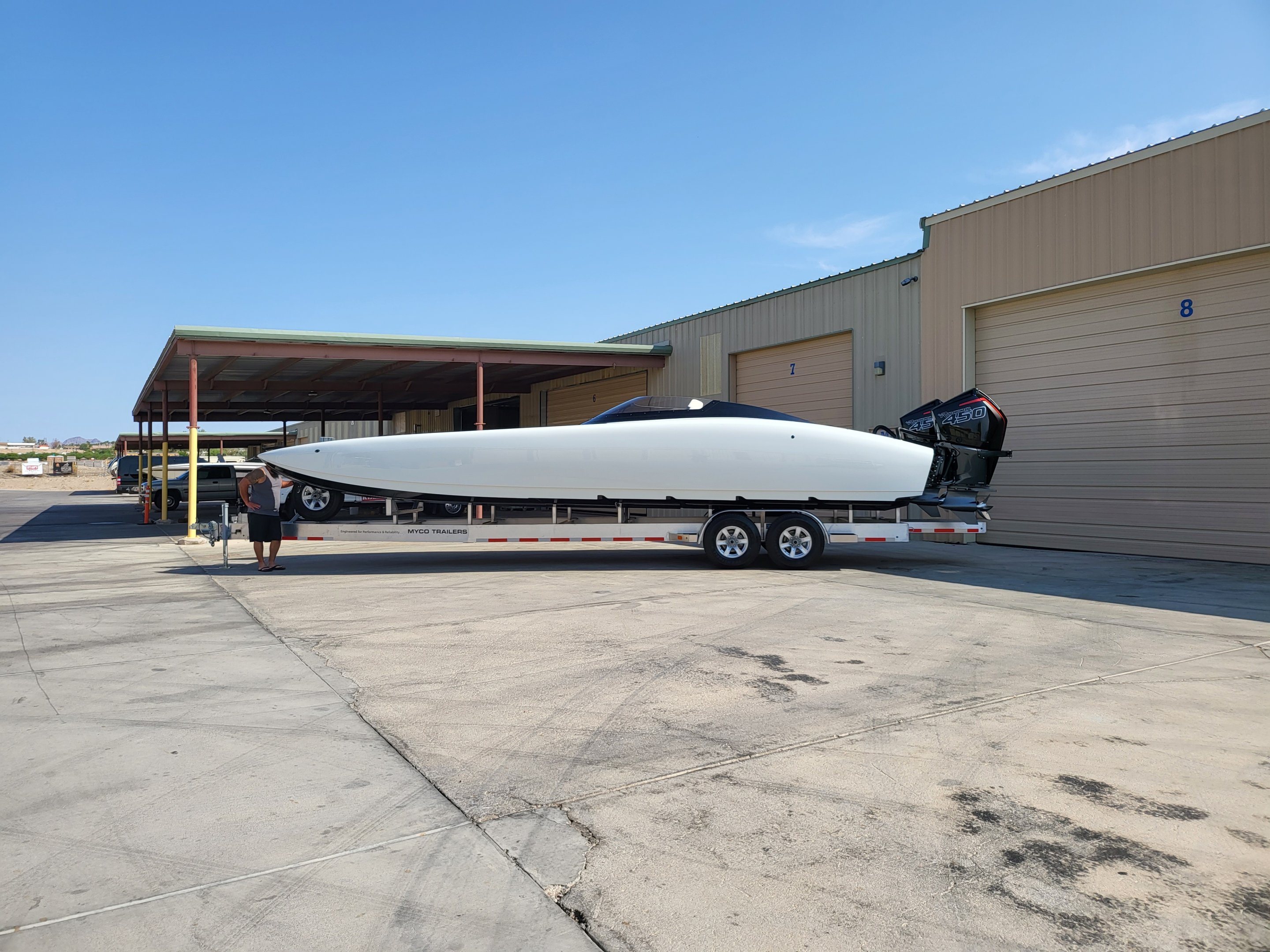 Picked up boat from Ryan and got to use it for the weekend. Timing worked out perfect as we had gone out for my good buddies bday. He runs what I think one of the lightest and even the fastest 27 outboard speedster so it was awesome for all of to run together. In the end everything worked out we had an amazing trip and took delivery of a amazing boat.

I got to use the boat a couple of times before the season ended. Ricky called up Tom from Tommy Gun Images and lined up a nice photo shoot to do before we tucked her away for the winter which I will link. Once it gets warmer we will do another shoot on the water and some video with Carter from Havasu Media Productions once it warms up.

Just want again to say thank you to everyone that had a hand in this build,

Doug Wright of course for building an amazing boat.
Grant's Signature Racing for Rigging this bad boy.
Scott and Athena and the crew and Unique for an awesome Interior.
Aj and the crew at Barrett Marine for always being there and taking care of me!
Ryan's Detail for amazing work and service as always.
Tom from Tommy Gun Images for the amazing Photos!

Last but definitely not least, Ricky at Maxed Out Marine for making the process easy and fun to do. It was a blast talking exchanging ideas and just making this project come alive! I don't think the process could have been any easier, Ricky loves what he does and enjoys seeing these boats come alive without a doubt. I hope it's something he's proud of that came out of his shop in the end. So thank you again Ricky!
Last edited: Feb 27, 2022
D

Here is a quick little video cruising back to the channel from another Dw owner Scott.

This boat is a BEAST! The ride and way it turns is amazing!


Here's another vid from that same day, you made the wright choice going with the 450s Jimmy!

LBZRCKS said:
This boat is a BEAST! The ride and way it turns is amazing!


Here's another vid from that same day, you made the wright choice going with the 450s Jimmy!

That was the same day I had to ask you 3 times if you wanted to drive right?

Doc said:
That was the same day I had to ask you 3 times if you wanted to drive right?

Glad I took you up on your offer!

Thanks man, let me know when you're ready to head out!

wow the interior is next level!! congrats on the boat!!

This ain't all folks! Skater368

Riverryder said:
wow the interior is next level!! congrats on the boat!!
Click to expand...

Scott at Unique does quality work. He's personally engaged in all projects. he did this Chevelle.

Congratulations on your build. Is there a hull weight available?

nganga said:
Scott at Unique does quality work. He's personally engaged in all projects. he did this Chevelle.

Congratulations on your build. Is there a hull weight available?

Don't quote me but I recall right at 4700lbs just don't remember if that was before or after interior.
D