Article Gallery
If you want to know what a sport was really like in the early years, it's always best to get it straight from somebody who was intimately involved in the sport itself. And Don Edwards is exactly that person to go to when it comes to knowing the sport of drag boat racing in the 1960s. 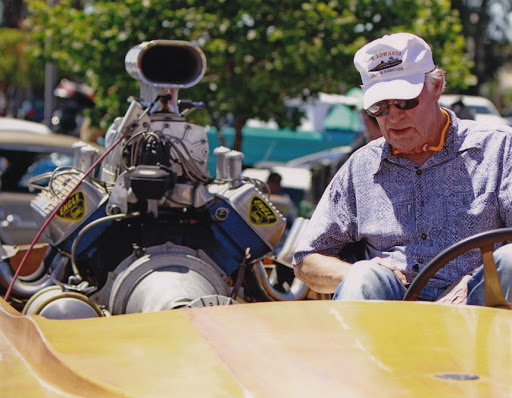 Like many kids growing up in the '50s, Don was a hot rodder at heart who early on got hooked on fast boats. He was there as drag boat racing evolved from a rather loosely organized weekend club outing at the lake to a rather professional and fast growing form of motorsports competition in a relatively short period of time. For more than fifty years, Don has immersed himself with every aspect of liquid quarter mile racing and candidly shares those thoughts and experiences here.


When and Where Did You First Get Your Interest in Fast Boats?

When I was a teenager, I always liked hot cars. In high school I had a 1940 Ford Coupe with a full race flathead engine so I definitely liked speed and things that were mechanical. One day in my hometown of Santa Barbara, I happened to see a little Cracker Box boat for sale with a V-60 in it and I just had to have it. And that was the start of my lifetime obsession with boats.


At That Time, Were You Involved in Other Types of Motorsports?

My old '40 Ford Coupe was pretty fast in its day. As I said, it had a full race engine in it with four Stromberg 81 carbs. I took it one weekend to Santa Maria for a drag race which was one of the first quarter mile tracks in California. I remember I turned 89 miles an hour in the quarter mile which was pretty good for a car you could also drive around on the street.


When and Where Was Your First Drag Boat Race?

The first drag boat race I ever went to was at Lake Ming in Bakersfield around 1960. It was put on by the Kern County Boat and Ski Club back then. I had a good friend, Don Beck, who lived nearby, and he built an 18-foot wood flatbottom V-driver with a Chrysler 354 c.i. in it. Don built the boat in his garage and I helped him when I could. It had a Wickens style bottom on it and it ran real well for a homebuilt. After a while, drag boat racing became a serious hobby. We'd go every month to the Ming drags.


Weren't You One of the Early Members of the National Drag Boat Association?

I heard that some guys were getting together to start a new drag boat racing association in the early 1960s. I think I went to the second meeting of the NDBA which was held at the Tahitian Village restaurant in Downey, California. Everybody was trying to figure out classes and rules and places to go racing. Don Beck and I continued racing his flatbottom for a couple of years with NDBA. The boat was a white hull with a gold stripe on it, and wherever we took it around Santa Barbara it would attract a lot of attention and cause a commotion. That's where the name "Golden Komotion" came from.


How Did Your Golden Komotion Hydro Come to Be? 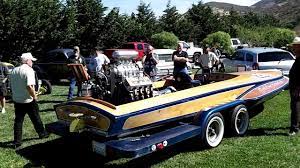 In 1964 I was at a drag race and saw Rene Andre's Hallett hydro driven by Don Prudhomme and I said to myself, I want a boat just like that. So in early 1965, I went to Rich Hallett's shop in Southern California and had him start on a boat that was a twin to Andre's, a 21-foot cabover design. When I got it, I took the engine out of another flatbottom and ran in the unblown fuel class for a little while. After about a year I got connected with engine builder Dave Zeuschel in North Hollywood and we got to be good friends immediately. He was the one who suggested that I make the change from my unblown fuel engine to a blown gasser. And it turned out to be a great decision.


Who Else Was on Your Race Team/Pit Crew at That Time?

There were several guys who used to routinely help me out at the races. One was Terry Cook, who was the editor at Hot Rod Magazine at the time. And Tim Wright, a writer for Car Life Magazine and Popular Science, was also part of our group.


You and Rene Andre Dominated Much of the Sport in the Mid-1960s, How Was That?

It's always fun to be on a winning streak. Because of Zeuschel, I wound up in the blown gas hydro class and Rene stepped up to blown fuel. Up until the time that Rene had his accident in 1966, we were the two boats to beat in both classes. I had a stretch with Golden Komotion where I won ten out of eleven straight NDBA races one season. And the one race I didn't win, I just couldn't get the engine to fire at the start line. I remember Terry Cook jumping in the water, swimming out to the boat and pulling it back in to the shore.


Who Were Some of the Other Top Competitors in Your Class at that Time?

Blown gas hydro was a pretty popular class back then, and it still is now. Guys like Gary Cornwall, Ted Phillips, Bob Valenzuela, and Sam Kannel were really tough competition.


What Was Your Best Top Speed in Competition with Golden Komotion? 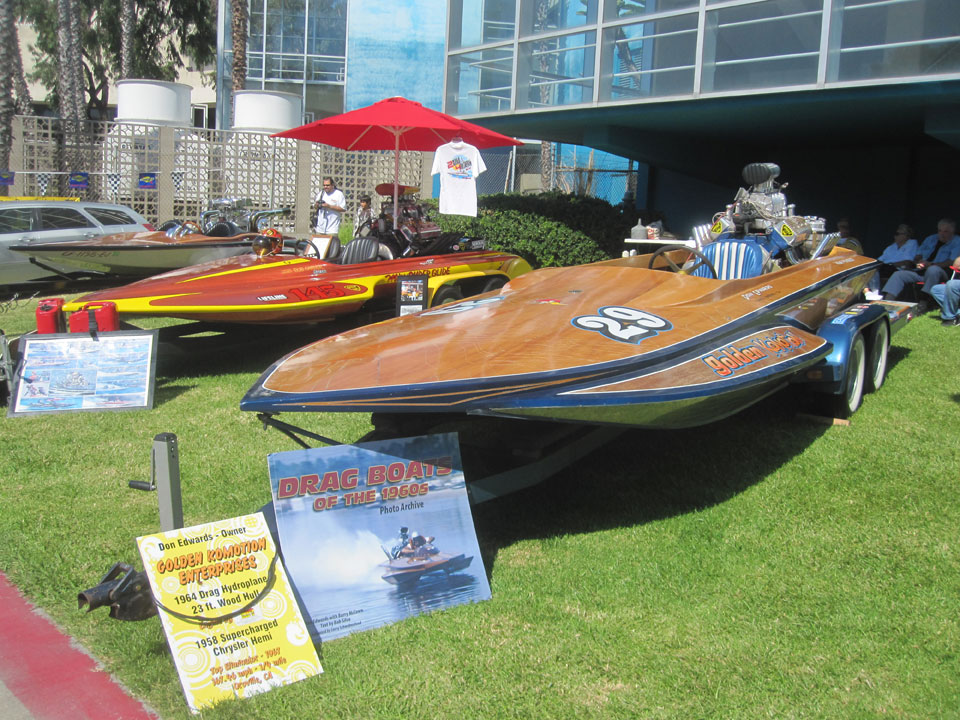 I set the class record at 136.54 mph at the Oroville race site on the Feather River. Don Prudhomme had the record before me. Unfortunately, my record only stood for a few months and somebody else broke it by about a mile or two. Things were changing rapidly back then. Drag boat racing was getting very popular and new boats and drivers were showing up at events all the time and the speeds were going up as well. I remember at a couple of races that there were more than 25 boats entered in just my blown gas hydro class.


Where Was Most of the Racing Done Back Then?

In the mid 1960s, Skiland in Perris, California was NDBA's home race course. It was a great place to race because of the way it was layed-out and water conditions were always excellent. We went there at least five or six times a year. We also went to Lake Ming in Bakersfield, Kingsburg, and the Oakland Airport Marina. And at about that time, Long Beach Marine Stadium was just starting to have a few drag races too.


In Late 1967 You Decided You Wanted to Expand Your Boat Racing Aspiration, What Happened? 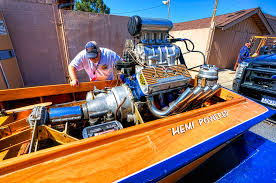 It was December 1967 and I was really interested in the Unlimited Hydros that were racing around the country. I even went to Seattle to check them out. When I got back, I contacted Rich Hallett to see if he wanted to tackle an Unlimited Hydro project. He said he did. Rich built the boat (a 30-footer) and we decided to power it with a gas turbine engine, a single shaft Allison T-40 which we bought for only $1,500 at the T.M. McBride WWII surplus warehouse in Los Angeles. It didn't come with any instruction manual and that eventually became a serious problem. Using a gas turbine in an Unlimited had never been done before. Up until then, all the Unlimiteds were running World War II V-12 Allison piston engines. If you remember, this is the time when Andy Granatelli was hooked up with STP sponsorship and was trying to win the Indy 500 with a turbine race car. 1967 was the year when Parnelli Jones had a big lead at Indy in the STP turbine car when the transmission broke just three laps from the finish of the race. Anyway, Granatelli had made me an offer of a $50,000 sponsorship if I could get my new Hallett/turbine Unlimited running in time for the Detroit Gold Cup in 1968. Unfortunately, things didn't go well as the T-40 turbine was just not the right kind of engine to be used. We destroyed the motor one night while the boat was sitting in the driveway of Rich Hallett's house. When we tried to start it up, the motor grenaded with a giant fireball out the tailpipe and big chucks of fan blade shot out of the side of the motor. There was nothing left to salvage and after that the project just fell apart. The boat was never finished and never got to the water for testing. Later on I bought a used turbine engine from drag racer Art Arfons, put it in the boat for display, and it's been an exhibit at the Palm Springs Air Museum ever since.


What Ever Became of Your Golden Komotion Hydro?

I finally sold the boat after the Unlimited Hydro project went bad. Sold it to a couple of guys back east and I don't know what ever became of it.


Where Did You Get the Golden Komotion Boat You Have Now?

It is another Hallett cabover hydro that a racer named Bob Miller used to own. The boat was driven by Tommy Tucker Fults and Dwight Bale for a time. It went 167.46 mph at the Oroville race course in 1967. I found out about the boat through the Internet and brought it out of barn storage. Somebody had tried to make it into a ski hydro and it wasn't in great shape. I bought the boat and have been restoring it ever since. It now has a 392 Chrysler Hemi engine which Ken's Automotive helped me get running again.


Tell Us About Your Involvement in Getting the Boat Racer's Reunion Going.

Some years ago I met Richard Parks, who is Wally Parks' son, the founder of the National Hot Rod Association (NHRA). Richard and I got talking about how boat racing needed to have some way for people who participated in boat racing to stay in touch with each other after they retired from competition. That idea kind of took shape over about a year and we wound up having the first Boat Racer's Reunion event at the NHRA Museum at the Fairplex in Pomona, California. It was a big success that brought a lot of people and old race boats back together again. It also helped the sport get more involved with doing restorations of older high performance boats which is really becoming a popular hobby.


Since Then, You, Barry McGown and Bob Silva Collaborated on a Coffee Table Style of Book About Drag Boat Racing. What's That About? 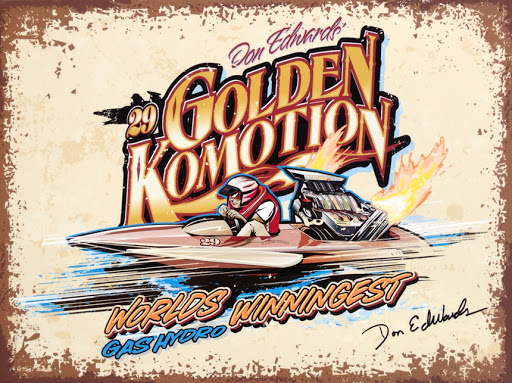 It's been almost five years ago when Barry McGown, who owned and drove the Banzai blown fuel hydro drag boat, started talking about someone needed to document what the early years of drag boat racing was like before it all disappeared. The more we talked, the more we knew we needed to do it. Bob Silva who is a good friend and great writer, agreed to help us and we started to collect photos and stories about the early years of drag boat racing in California. It took us well over a year to complete the book and it was a lot more work than we thought it would be when we started. We concentrated on drag boat racing as it was in the 1960s since that was the era that Barry and I knew best. The book, called "Drag Boats of the 1960s'" is 125 pages and it's filled with get old photos and lots of stories about famous boats and racers. It is published by Iconografix in Hudson, Wisconsin and you can order it at most major book stores like Barnes and Noble, or order it direct online through our website, www.donedwardsdragboats.com.
Reactions: Blow It Up and OkHallett270