THE ELECTRIC PROPLUSION BEAT GOES ON

Article Gallery
Like it or not, electric propulsion appears here to stay. The automobile industry is falling all over itself to carve out an ever-growing piece of this pie. As many of you have probably heard, Elon Musk recently received a purchase order for 100,000 vehicles from rental giant Hertz. That should get your attention as Tesla has now been elevated to a trillion dollar company. 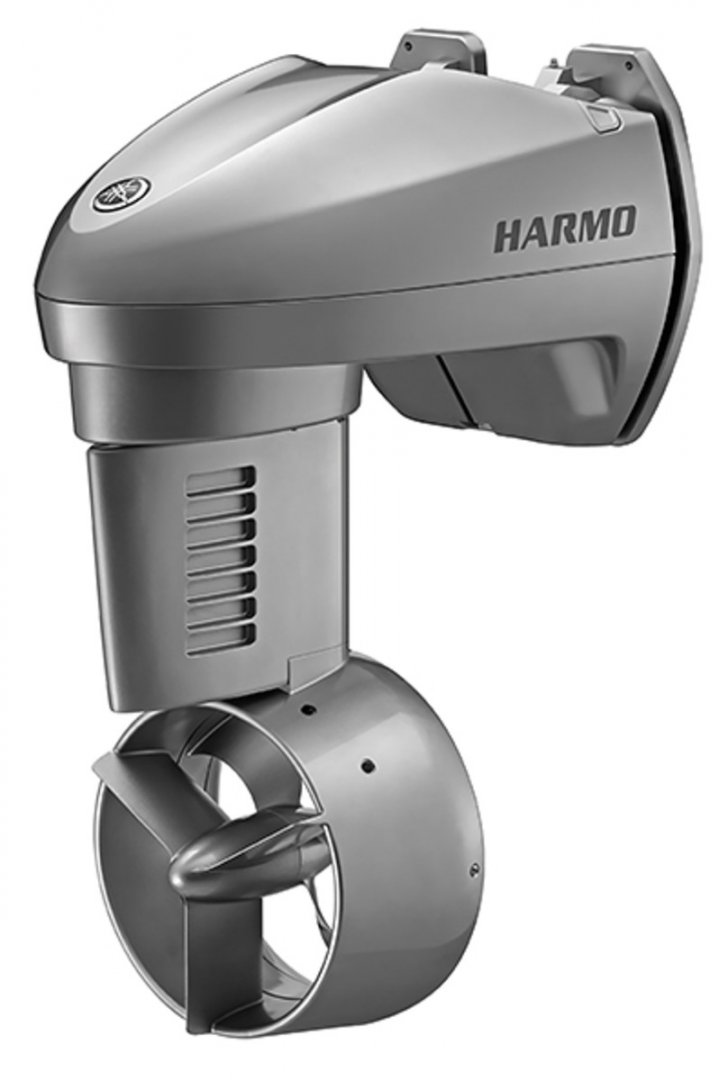 Yamaha has never been a company to rush anything into production, and its first electric outboard, the Harmo (short for harmony, however I suspect that “Grads” might have had a hand in picking this name - LOL), is a prime example. The first iteration of this propulsion system was unveiled in Europe back in 2016, and its newest version was officially revealed in the United States this September. Its predicted appearance on American boats, however, won’t be until 2023 according to Yamaha sources.

Already on the market is Vision Marine’s E-Motion 180E (for 180 hp) which was demonstrated and tested at the International BoatBuilders’ Exhibition and Conference in late September in Tampa, FL. With eight people aboard a 22-foot Starcraft pontoon, the 180E pushed the boat easily on to a plane in near silence. With a lighter load, it reportedly reached a top speed of approximately 35 miles an hour.

Depending on the battery source, the Harmo can be charged using shore power or a standard electrical plug.

While high-power electric outboards are considered to be the future, conventional lithium-battery technology isn’t quite ready to supplant fossil fuels as a power source for mainstream boats. At least not yet.

So instead of focusing on large outboards that can push you back in your seat like a Tesla for half an hour, Yamaha focused on things a smaller electric outboard can deliver in spades now: quietude, precise control, smoothness and maneuverability.

Make no mistake; Yamaha isn’t likely to ignore the high-horsepower arena in the not too distant future. “As battery technology/efficiency progresses, it will help expand all electric propulsion areas, including larger and higher-output marine products,” says Phillip Speligene, Yamaha’s product planning department manager. 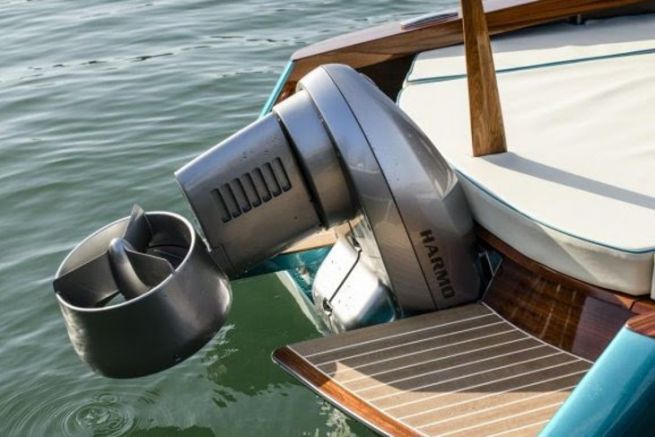 The major diversion point that separates Harmo from other electric outboards is its rim-drive system, which is a technology found on proven applications from bow thrusters to ship propulsion systems.

Rather than using a traditional, fully exposed propeller that pushes a boat in a turbulent froth of power, the Harmo employs a 15-inch-diameter, four-blade, aluminum impeller that’s circled by a brushless 3.6-kW motor. The Harmo weighs just 121 pounds and produces 225 static pounds of thrust, which is the equivalent of a 9.9-hp gasoline outboard. That type of outboard typically uses a prop with a 9¼-inch diameter, so the water-moving capability of this Yamaha system is significantly higher.

While the Harmo resembles a sterndrive to the naked eye, it’s just a very short outboard, since it is self-contained outside the transom. The upper part of the motor is kind of bulky looking, but its housing is mostly a styling façade with not much inside. If the casing conformed to its contents, the Harmo would take on a sticklike appearance. It only contains a steering actuator, lower unit supports and an enclosed wiring harness. Its short stature allows it to tilt 74 degrees upward to rise clear of the water and prevent marine growth if left at a dock for extended periods of time.

To enhance maneuverability, the independently articulating lower unit of the Harmo outboard can turn 70 degrees in either direction. By comparison, a Yamaha 9.9hp model turns only 43 degrees each way. So with 140 degrees of total articulation, a Harmo boat pilot can perform maneuvers such as turning a boat around in its own length.

To harness this agility, the Harmo can be controlled by Yamaha’s Helm Master joystick in addition to a traditional steering wheel. With twin Harmo outboards, the joystick can be tilted to the right or left to move the boat sideways, always an attention-getter moment for spectators when wtching on the dock The drive-by-wire system allows the helmsman to make fast, precise corrections that wouldn’t be possible with conventional outboard and hydraulic steering. 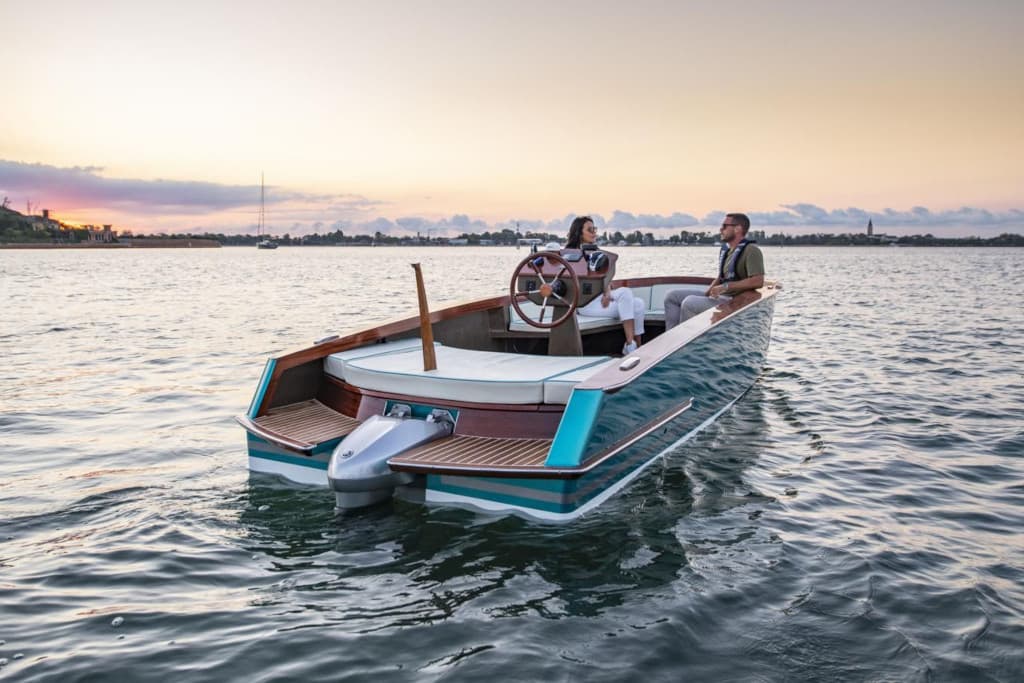 This integration of power and control dovetails with Yamaha’s CommandBlue philosophy that’s geared toward making the boating experience simpler, more satisfying and confidence-building even for novice boater operators..

The present version of Harmo outboard’s Helm Master control does lack Yamaha’s SetPoint suite of advanced maneuvering features — for now. These features include the StayPoint virtual anchoring system that holds a boat’s position and heading even in wind and current. FishPoint holds the boat’s relative position and allows it to point in whatever direction the wind and current dictate, reducing the number of shifts needed.

Speligene says that installing SetPoint is only a matter of adding hardware, such as a heading sensor, and integrating software. With those changes, the Harmo would be a potent fishing weapon, as it would eliminate the clunking sound that most outboards make thanks to a universal dog-clutch mechanism in the lower gear case. With more range of motion, shifts would be fewer, while control would be even greater. Speligene says Yamaha would allow U.S. boatbuilders to dictate whether the cost-benefit ratio of SetPoint was worth it to the end customer..

Yamaha leaves it up to its vendors/dealers to supply their choice of batteries for the Harmo’s 48-volt system — a smart move, since battery technology is projected to be in a state of flux for the next few years as new platforms emerge or supply-chain disruptions make certain models tough to obtain. This strategy allows boatbuilders and dealers to take advantage of whatever technology suits their usage and budget.

There are many ways to get to 48 volts power. For example, Yamaha’s electric golf carts use six 8-volt conventional batteries to power them. Several good, marinized lithium battery solutions are on the market, such as Dakota’s 48-volt lithium iron phosphate marine battery that weighs just 77 pounds and still contains 96 amp-hours of stored power. Another solution would be four 12-volt batteries, wired in series, such as the Lithium Blue LiFePO4 (lithium iron phosphate) DLB-GC12 batteries, which have an extended 200 amp-hours of capacity.

A boat builder could even use conventional lead-acid batteries, which would be cheaper but would incur a significant weight penalty and can only be discharged to about 50 percent without accelerating battery aging. By contrast, lithium batteries can be repeatedly discharged fully without harm and then charged back to full capacity.

Although the Harmo will likely be used as the main propulsion system for boats cruising waterways with horsepower or maximum speed restrictions, at its U.S. online unveiling, it was also shown as an auxiliary motor on a fishing boat. Right now, it is only being used on the Respiro, a 23-foot runabout built by Venmar in Italy. Several undisclosed U.S. builders are reportedly testing the system, and it’s likely that at least one is a pontoon company. Yamaha has not announced a price for the Harmo.

“Harmo is the perfect system for horsepower- or internal-combustion restricted waterways,” says Ben Speciale, Yamaha Marine U.S. Business Unit president. “Ultimately, it is up to our boatbuilder customers to decide how to integrate it into their boats, and we are eager to see the result.”

You can bet, however, at some future date, electric marine propulsion is destined to reach the performance marketplace as well.