ELECTRIC OUTBOARDS – CLOSER THAN YOU THINK?

Article Gallery
About a month ago I wrote an article for RDP reporting on Mercury's plan to introduce electric outboards to the mainstream recreational boating market in the next couple of years. Nothing has changed. Mercury is still pursuing that goal, but they are not alone. There are other electric outboard companies (and inboard as w in the game too, and a few are closer than you might think to making this a reality. 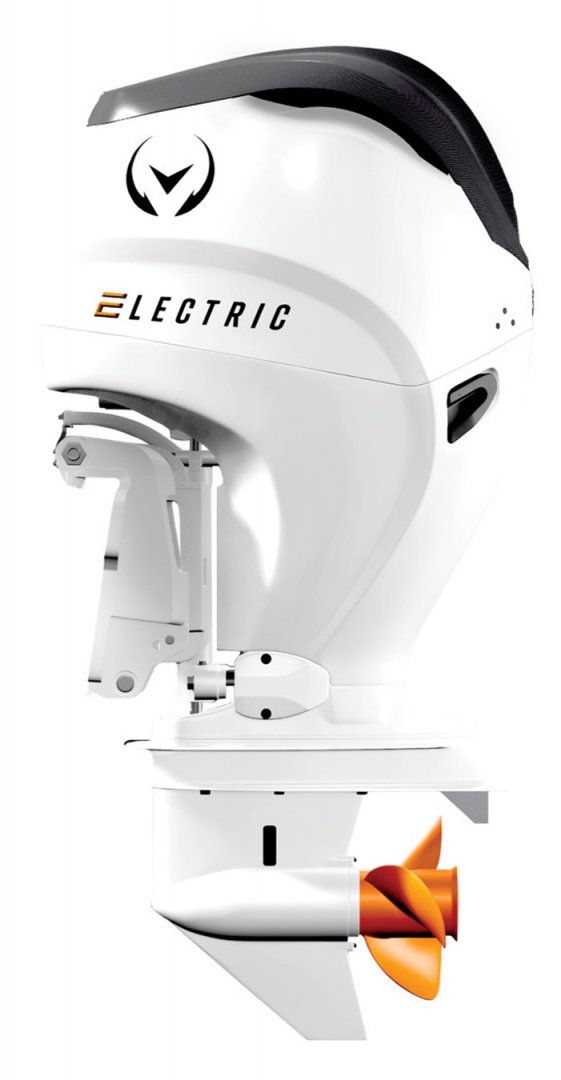 The all-electric E-Motion 180E outboard is now in production from Vision Marine.

In May 2021, Brunswick Corporation, the parent corporation of Mercury Marine and boatbuilders such as Boston Whaler, Sea Ray and Lowe, announced plans to have five electric propulsion products and electric boats in four different segments by 2023. That announcement came just six months after Canadian electric-boat manufacturer Vision Marine Technologies Inc. had an initial public offering on the stock exchange that drew in excess of $27 million, with plans for a 180-hp electric outboard. And, just this June, Seattle-based Pure Watercraft went into production with its own electric outboard.

“We were the first to be listed as an electric boatbuilder on the Nasdaq,” says Alex Mongeon, CEO of Vision Marine Technologies Inc. “It’s more like a mission to be the first one.”

For Pure Watercraft founder and CEO Andy Rebele, the question is simple: “How do we get new people into this boating we love and get them on the water? Using our system is simple. Buying it should be made as simple as possible.” 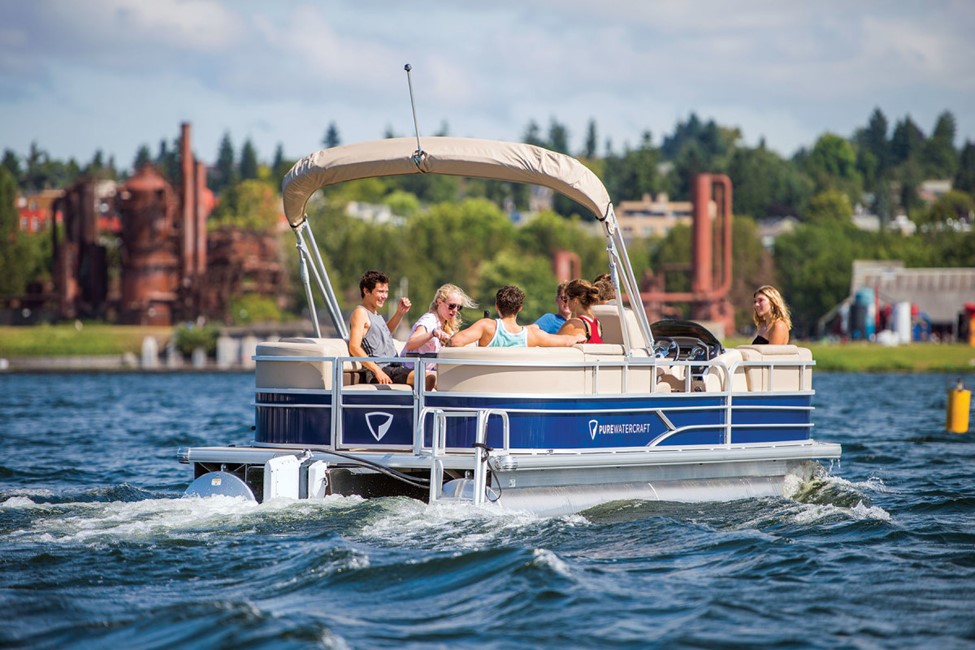 The two entrepreneurs are examples of the new generation of electric-boat builders. It’s not as if electric outboard propulsion is new; companies such as Torqeedo and Elco have been around for decades. But Mongeon and Rebele have the financial backing, experience and aggressive marketing plans they say will attract new boaters and change how boaters will go boating in the future.

One would expect the same from Brunswick Corp. In its announcement during its annual investor day presentation this past May, Brunswick said it has partnered with Pennsylvania-based Carnegie Robotics to develop an Advanced Driver Assistance System as part of its ACES — autonomous, connected, electric and shared access — initiative. How Brunswick’s new electrified efforts will roll out is still remains to be seen.

Mongeon and his partner Patrick Bobby are experienced boaters, with Mongeon having owned a number of conventional internal combustion powred high-performance boats. Vision Marine’s new outboard is called the E-Motion 180E. Mongeon, said his company targeted that size engine because its research revealed that the average conventional outboard is rated at 175 hp.

“You could push a pontoon, a bowrider or a center console,” he says, adding that twins can also be installed of the new E-Motion 180E. He acknowledges that batteries are “90 percent” of the challenge for the company, and that as prices and size continue to come down, Vision Marine hopes to expand its model line.

As an example of the aggressive posture Vision Marine is taking, the company partnered with Hellkats Powerboats, a manufacturer of high-performance catamarans in Michigan, to build a 32-footer with twin 180Es. Powerboat racing world champion Shaun Torrente is building special lower units that Mongeon hopes will push the boat to 100 mph or more which will be a new world speed record for electric powered craft. 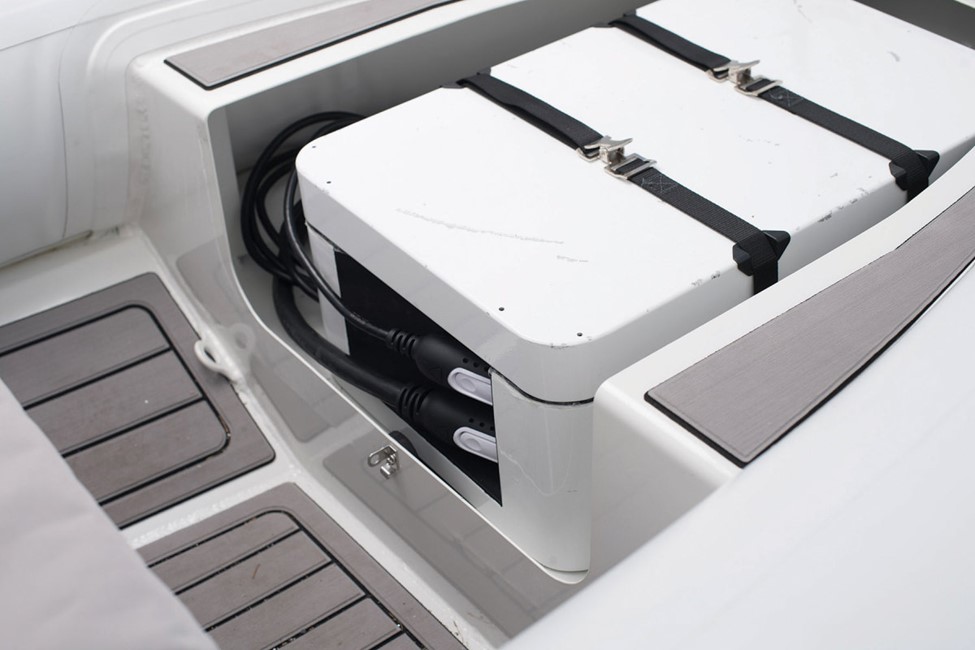 Mongeon says Bobby has been testing and proving the viability of the E-Motion concept since 2010. He says the engine and required battery pack have the same range as a 20-gallon fuel tank. Batteries are about 25 percent heavier than a comparable fuel tank, but the overall motor is significantly lighter than a gas-powered version. The 180E runs at 650 volts with a peak of 700. 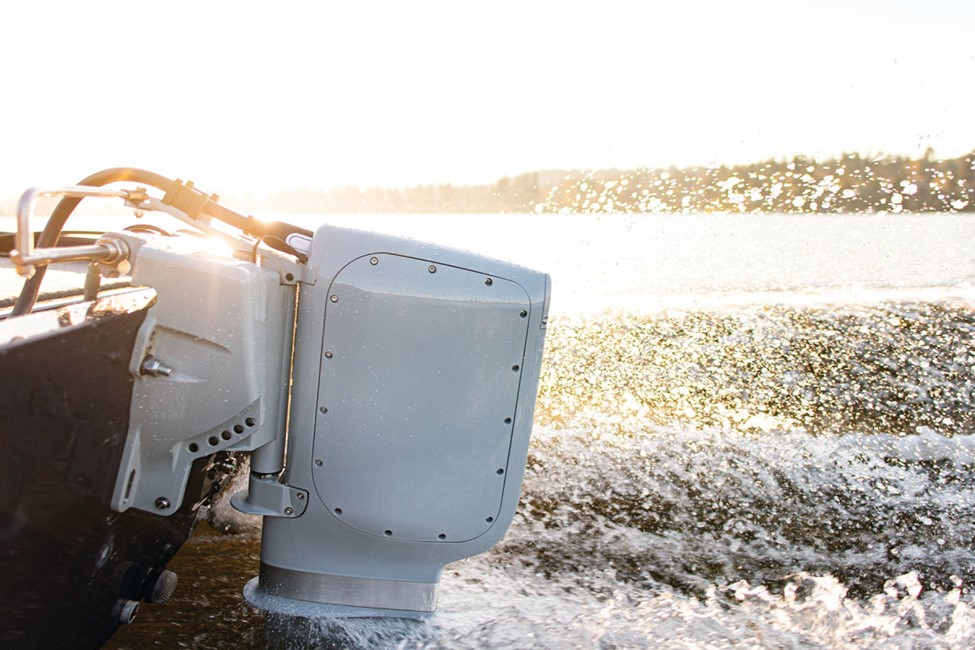 Battery technology seems to be evolving daily, according to Mongeon. Early this year, the company installed a battery that had 20 percent more energy than previous units. The company works with four different battery suppliers, depending on the application. Three are based in the United States and one is overseas, but Mongeon was quick to point out that none is based in China. Vision Marine purchased one of its suppliers, Mac Engineering of France, and integrated key members of that team with Vision.

Mongeon says the price of the E-Motion 180E is about $83,000 in U.S. dollars, including the motor, battery pack and controls. Although that price by today’s standards seem astronomical, it doesn’t appear totally out of the ballpark when you consider the price of Mercury’s just introduced V-12 600 horsepower engine. Vision plans to produce 300 motors a year, and in May, it announced an OEM agreement to supply Limestone Boats with 180E outboards (the first hull is expected to hit the water in midsummer). There are plans to partner with other boat manufacturers as well.

Vision Marine also provides its own stainless-steel propellers, and is working with Glendinning for joystick controls. The MyVision app monitors a boat using a smartphone, providing the location, state of charge and 24/7 on-call service.

Instead of pushing the installation of charging stations, Mongeon says Vision Marine is focusing on developing an onboard charging system that works with a basic shore power receptacle found at many marinas.

The University of Washington bought a coaching boat powered by a Pure Watercraft outboard for its rowing team, and did a study comparing operating costs versus a gas-burning outboard. Rebele says the Pure Watercraft motor showed a 100 percent ROI in two years. “We’re finding a way to get people a boat that lowers the operating cost compared to a gasoline burning outboard,” he says.

Rebele started in electric propulsion by converting sterndrive gas powered runabouts to electric, but that was too expensive. Rebele wanted to develop affordable electric propulsion. He had a background in technology and the online auction business, and in 2011 started his company to develop an electric outboard with the power output of a 40- to 50-hp gasoline motor. In late 2020, the company closed on $25 million in financing. “We need to appeal to people who want to enter boating,” Rebele says. “Who has money nowadays? The tech industry. They drive a Tesla. How does that person get into boating?”

Pure Watercraft recently partnered with Tracker Marine on its pontoon and Bass Tracker models, as well as with RIB brand Highfield.

After a beta program discovered some errors with early motors, Pure corrected them and plans to go into production in June 2021. It has bundled its system with boats from mega-volume builder Tracker Marine. Pure Watercraft offers complete systems on Bass Tracker and Sun Tracker pontoon models, as well as Highfield RIBs and the aforementioned Still Water 25XL coaching launch.

Rebele wants to offer complete packages to simplify the buying process. Prices for complete boat packages, published on the website, are all less than $30,000. “We like to make decisions easy for our customers,” Rebele says. “A $500 deposit secures the purchase, and when the boat is delivered, a representative shows the buyer how everything works.”

Pure Watercraft’s battery pack is modular, and a buyer can choose one to best fit an application. It charges with 120- or 240-volt shore power. Pure will also sell the outboard motor system with the battery and throttle for $16,500. Whether you buy a complete boat and engine package or the outboard kit, the Pure Watercraft app is included in the purchase price. 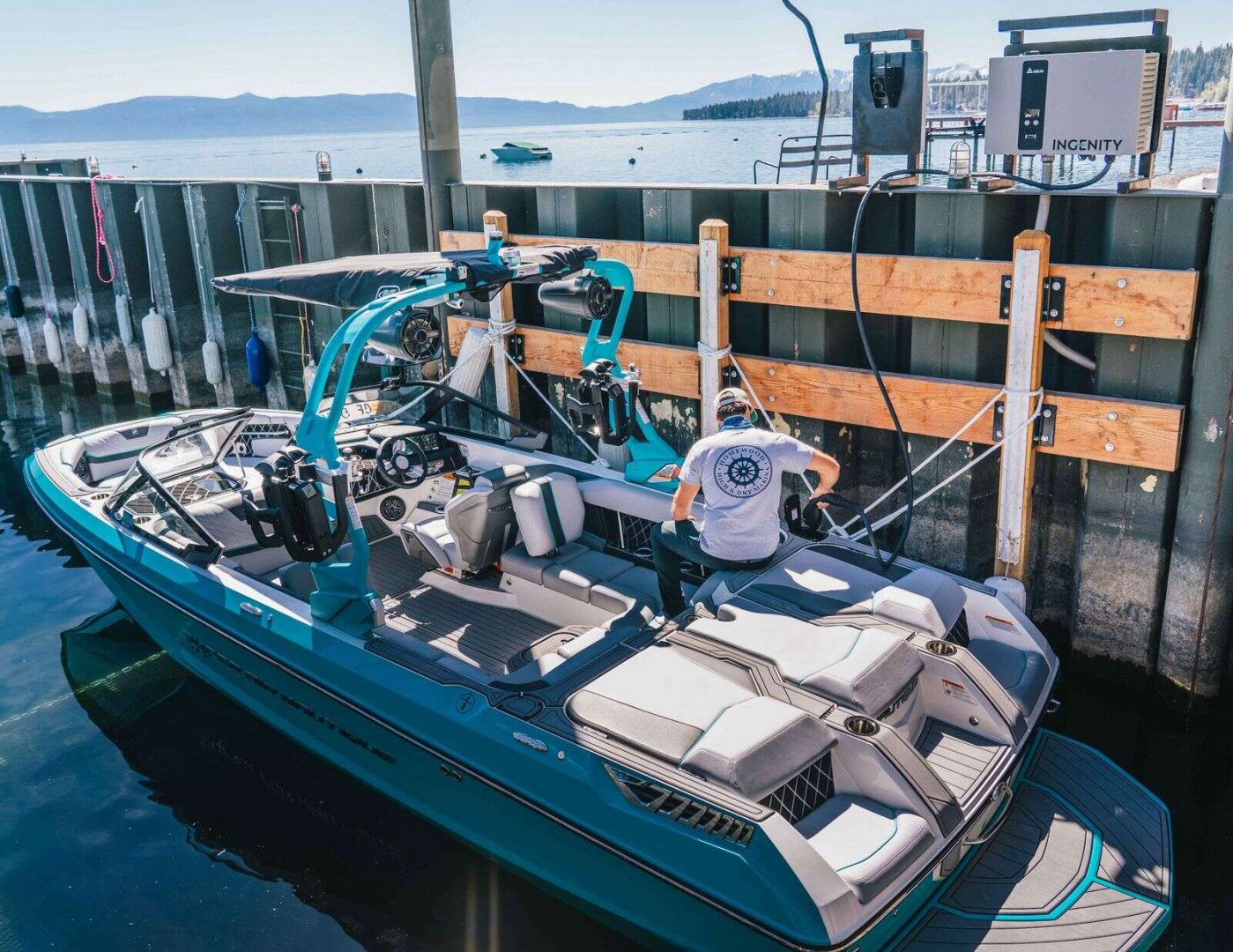 Rebele also sees electric propulsion as a natural fit for boat clubs. When a club member returns a gas-powered boat, it needs to have the fuel filled and the oil checked. “If it’s electric, you come back and plug it in,” Rebele says. “It fills itself.” 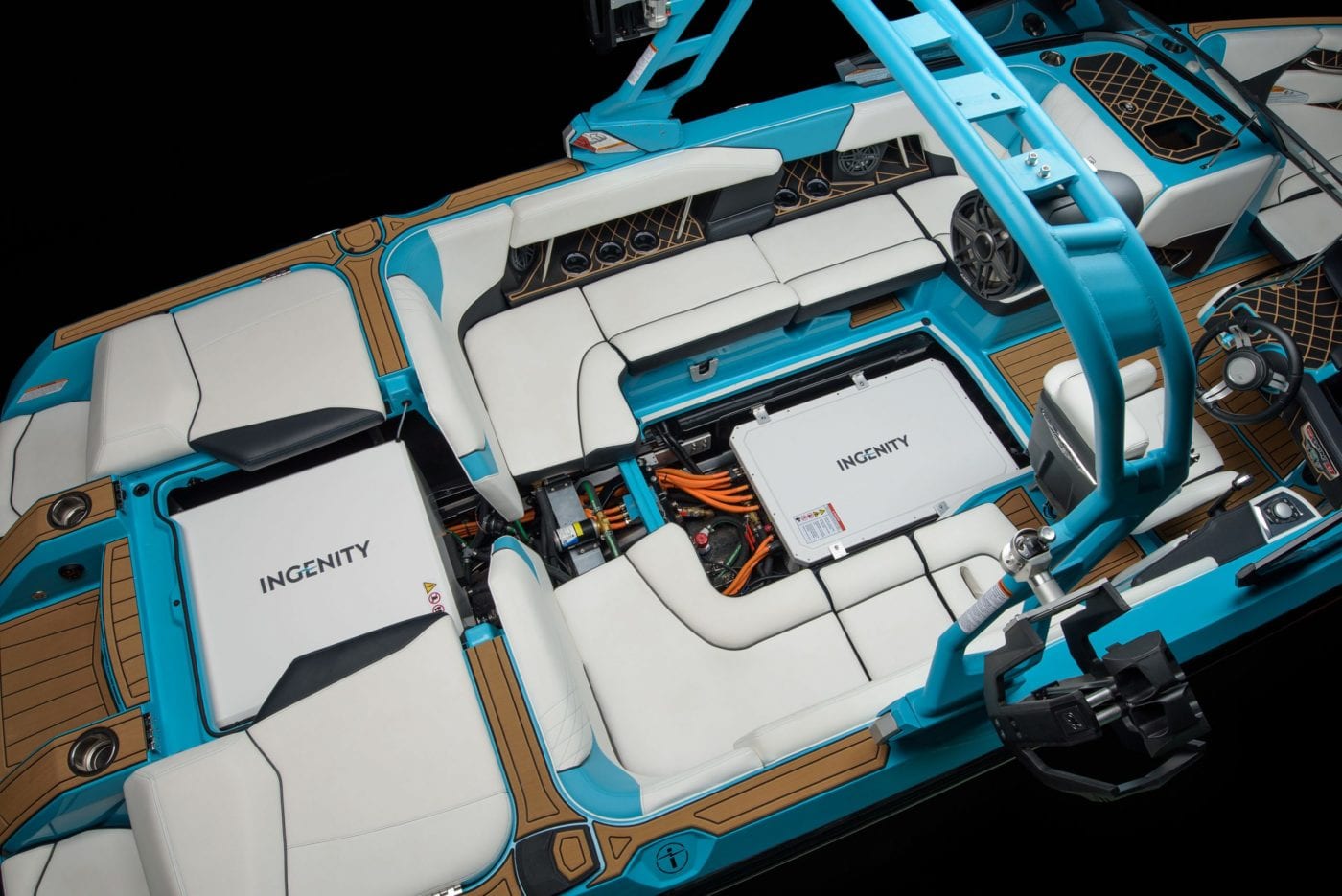 Shown here is Nautique's all electric inboard tow boat which has been testing for several years.

Pure Watercraft had a pilot electric-boat club in Seattle last summer, and Rebele says “people are very psyched to sign up for a boat that’s quiet and doesn’t smell like gas. It’s also immune to spikes in fuel prices.”
Reactions: squeezer