Article Gallery
IHBA officially bowed out of the drag boat racing business at the conclusion of the 2009 World Championships at Firebird Lake in Phoenix and turned the reins over to Lucas Oil. Here’s Part 2 of that final IHBA race.

As for the 2009 IHBA World Finals, they went out in style. Although the total boat count was down slightly from 2008, it was a quality show from beginning to end. Fans were treated to a new world speed record of 260.98 mph by Daryl Ehrlich in “Problem Child” and multiple 160 mph plus runs by Tony Scarlata in the Top Alcohol Flat, “All Lit Up”. It doesn’t get much better than that. 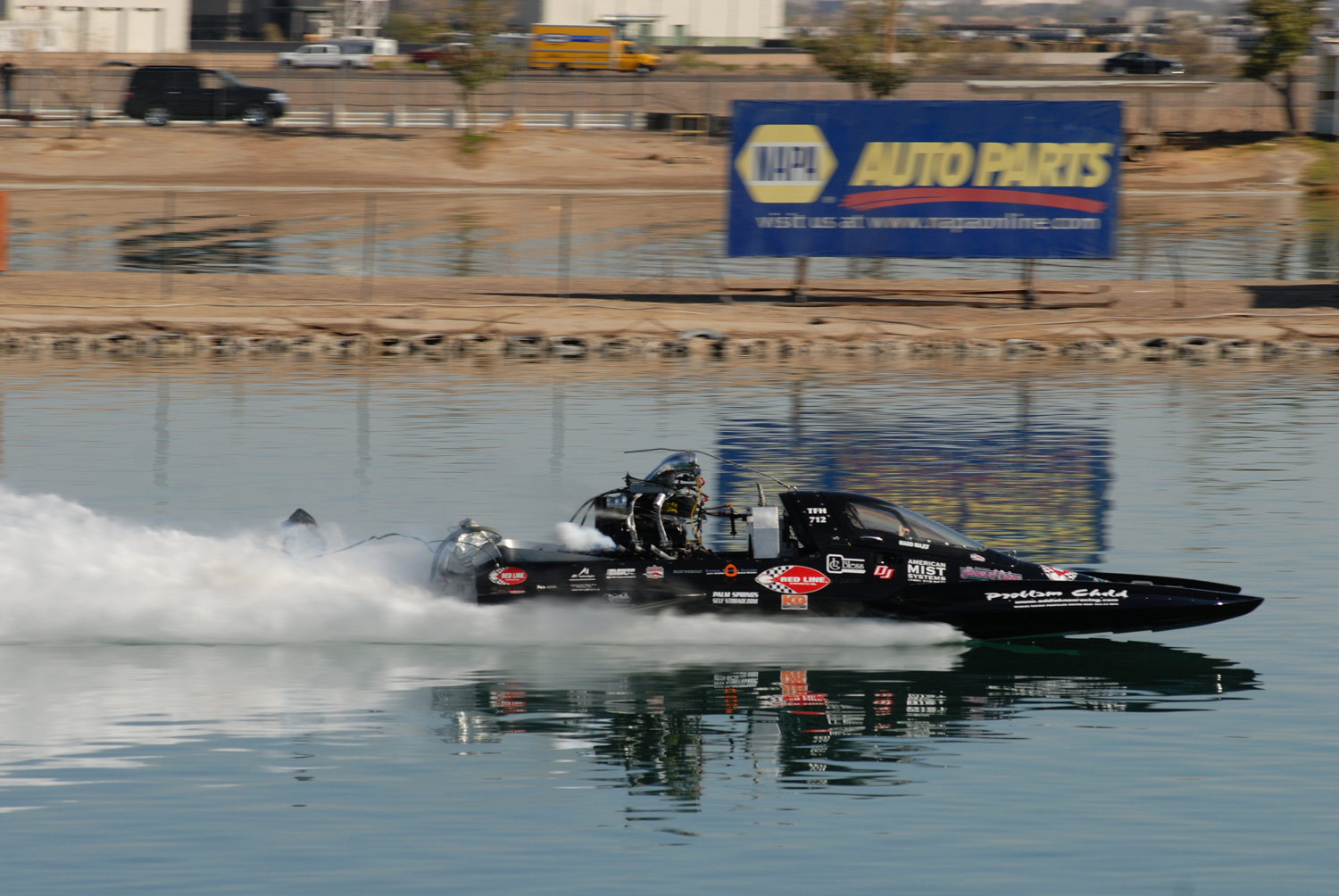 A five-boat field of fuelers still had plenty of fire power to bring spectators to their feet every time they loaded on to the staging rope. In qualifying, Daryl Ehrlich and “Problem Child” got the bye in first round eliminations thanks to a 4.630 second ET, quickest of the group. John Haas in the “Speed Sports Special” and Glen Wilson in “Toxic Rocket” looked like strong contenders with impressive passes of 4.864 ET/241.08 mph and 5.052 ET/230.78 mph respectively. During round one of eliminations, Scotty Lumbert got the “Spirit of Texas” unleashed for a sparkling 5.105 ET/237.56 mph performance while the “Toxic Rocket” never made it off the starting line. John Haas then took the measure of Jarrett Silvey in “Hot Licks Bullet” thanks to a solid 4.689 ET/243.70 mph pass. In the semi-finals “Problem Child” squared off with the “Spirit of Texas”. Ehrlich thrilled the crowd with a winning 260.98 mph trip (a leg on a new IHBA TFH record) and lowered his ET to 4.626. Sunday’s final was a classic match-up between Ehrich and Haas. It was a take-no-prisoners duel as “Problem Child” got the win and the championship with low ET 4.524 and fastest speed of the World Finals at 264.82 mph. Ehrlich’s 264 Sunday run counted as the needed back-up for his Saturday 260.98 mph pass putting “Problem Child” on top of the record book 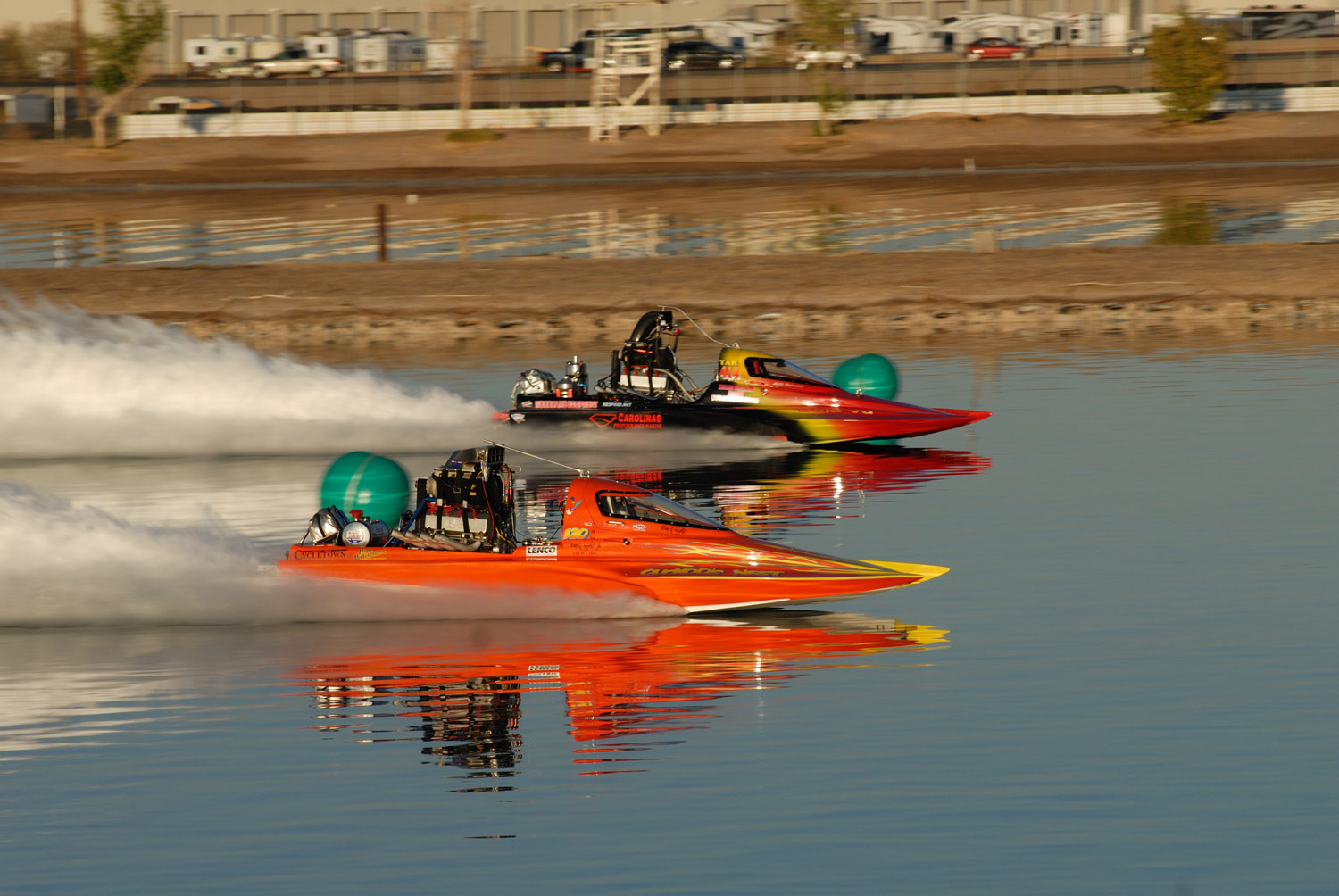 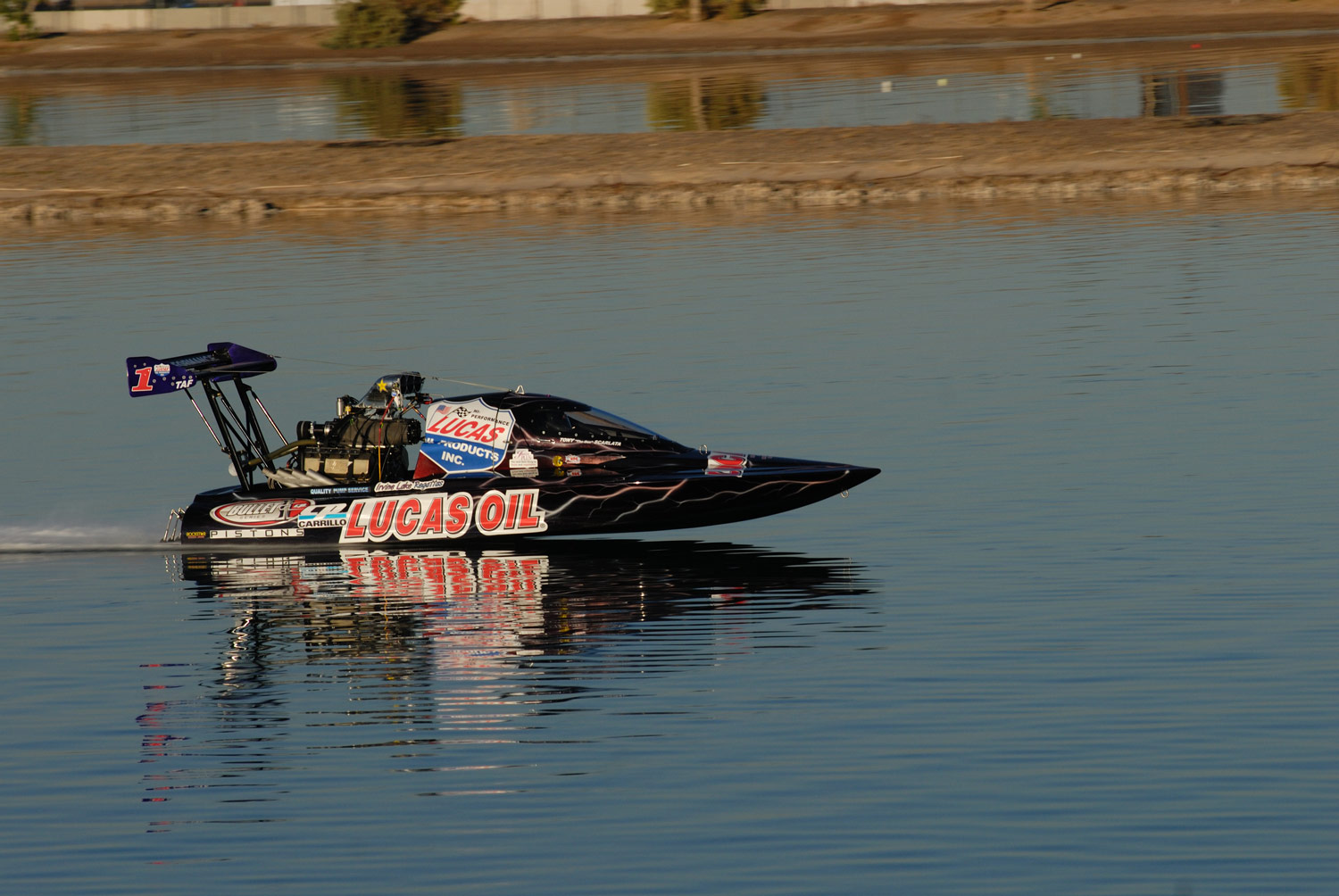 If there was an MVP of the 2009 World Finals, the vote would have most likely gone to Tony Scarlata driving the red-hot “All Lit Up” entry of Steve Westerfield’s. Right from the opening bell, Scarlata was all over the competition in virtually every round. He started with a 154.44 mph/6.992 in qualifying one, followed up with an even better 158.96 mph/6.762 in round two making him fastest and quickest of the day for flatbottoms. In the first round of Eliminations, Scarlata was the only driver in the sixes with a 6.803 ET victory (162.48 mph) over Marcus Kinsey in “Bad Company” who red lighted. In the Semis, both Scaralata and Don Bausher in “Habit Forming III” advanced easily as their competition red lighted. Scarlata was still hot, however with a flawless 161.68 mph/6.911 pass. The much anticipated finals between Bauscher and Scarlata failed to materialize as Bausher couldn’t shake his mechanical troubles and stalled off the starting line. Scarlata cruised the quarter mile for the win and championships with a 126.20 mph/6.961. Drag boat fans may have to find someone else to cheer for in 2010 in TAF as “All Lit Up” boat owner Westerfield has announced plans to switch from water to asphalt for the coming season and campaign an Alcohol Funny Car. 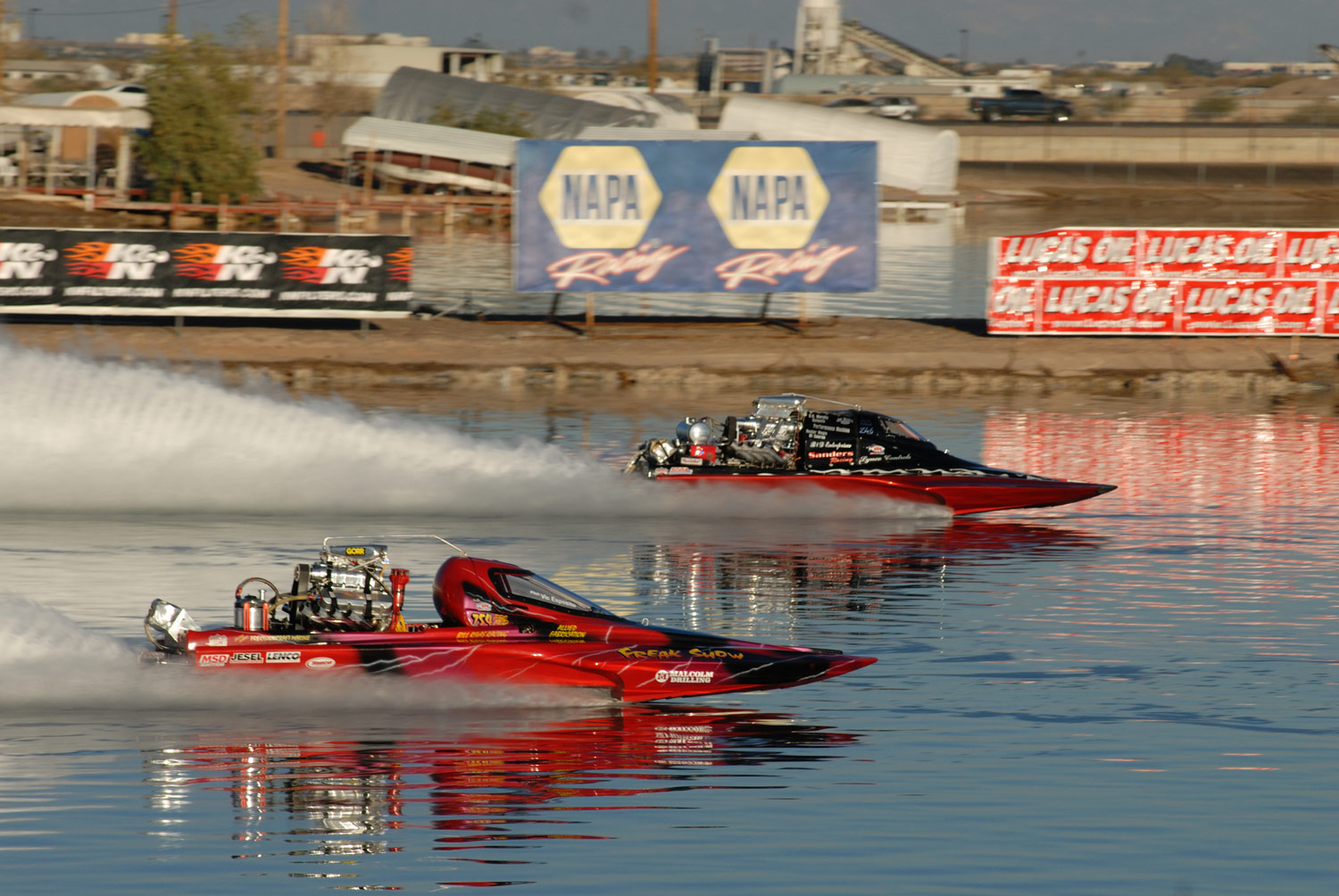 No shortage of stiff competition in the Pro Mod class, a total of 14 entries in the field. In the first qualifying round, eventual winner, Bryan Sanders from Houston, Texas put the class on notice with a 189.28 mph/7.065 and a very relaxed 1.191 reaction time. In qualifying two, Travis Tuttle driving “Short Fuse” put down a solid 174.50 mph/6.848 to stay a fraction ahead of Gray Bauer’s “Excessive Force” 172.76 mph/6.884. In qualifying four, Terry Kain ripped off a big number, 179.02 mph/7.073 to make it appear that Pro Mod would be anybody’s race. During the first round of eliminations, four boats dipped under the seven second mark; Charles Duncan’s “Danger Zone”, Steve Rajcic’s “Agent Orange”, Tim Kelley’s “Alter Ego” and Terry Kain. In second Eliminations, Bryan Sanders took the win over Duncan with a 167.40 mph/7.047. The Semis were also tight with Sander winning over Marty Logan in “Livin’ Tha Dream” and Vic Esposito’s “Freak Show” advancing to the final thanks to a victory over Kyle Brawley and “Alcohol Dependent”. As expected the final showdown between Sanders and Esposito was a classic. Sanders won the class at the starting lights with a .025 reaction time compared to a .182 for Esposito. Sanders posted a 166.96 mph/7.030 against Esposito’s 163.38 mph/7.048 for the title. 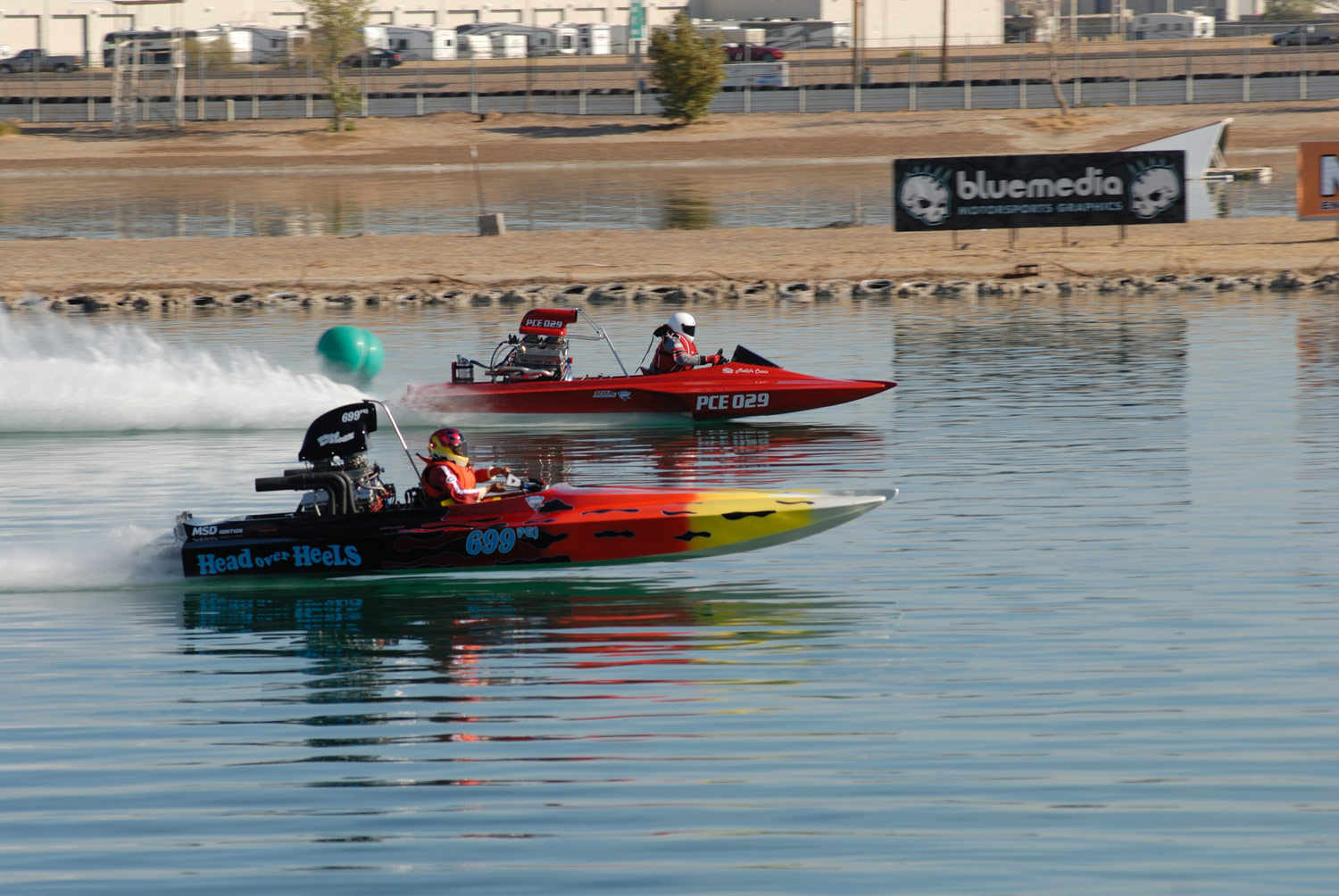 After four rounds of qualifying, Dave Lipinski’s “Hot Shot” was the top qualifier followed by Joey Grose in “Wet Dream” and Ray Florez in “Head Over Heels”. Grose red lighted in the first round of Eliminations to take himself out of competition while Florez nd Lipinski moved on. In round two, Lipinski got bumped by Steve Schmidt in “Bad Influence” while Florez squeaked by Mike Carruthers in “Midlife Crisis”. In the Semis, Florez downed Schmidt with a 125.84 mph/7.870, index 7.82 to go to the final against Milton Tolen’s “Flat Magic” from Jacksonville, Florida. In the decider, Florez won it with a 127.98 mph/7.782 to Tolen’s 113.78 mph/8.127. 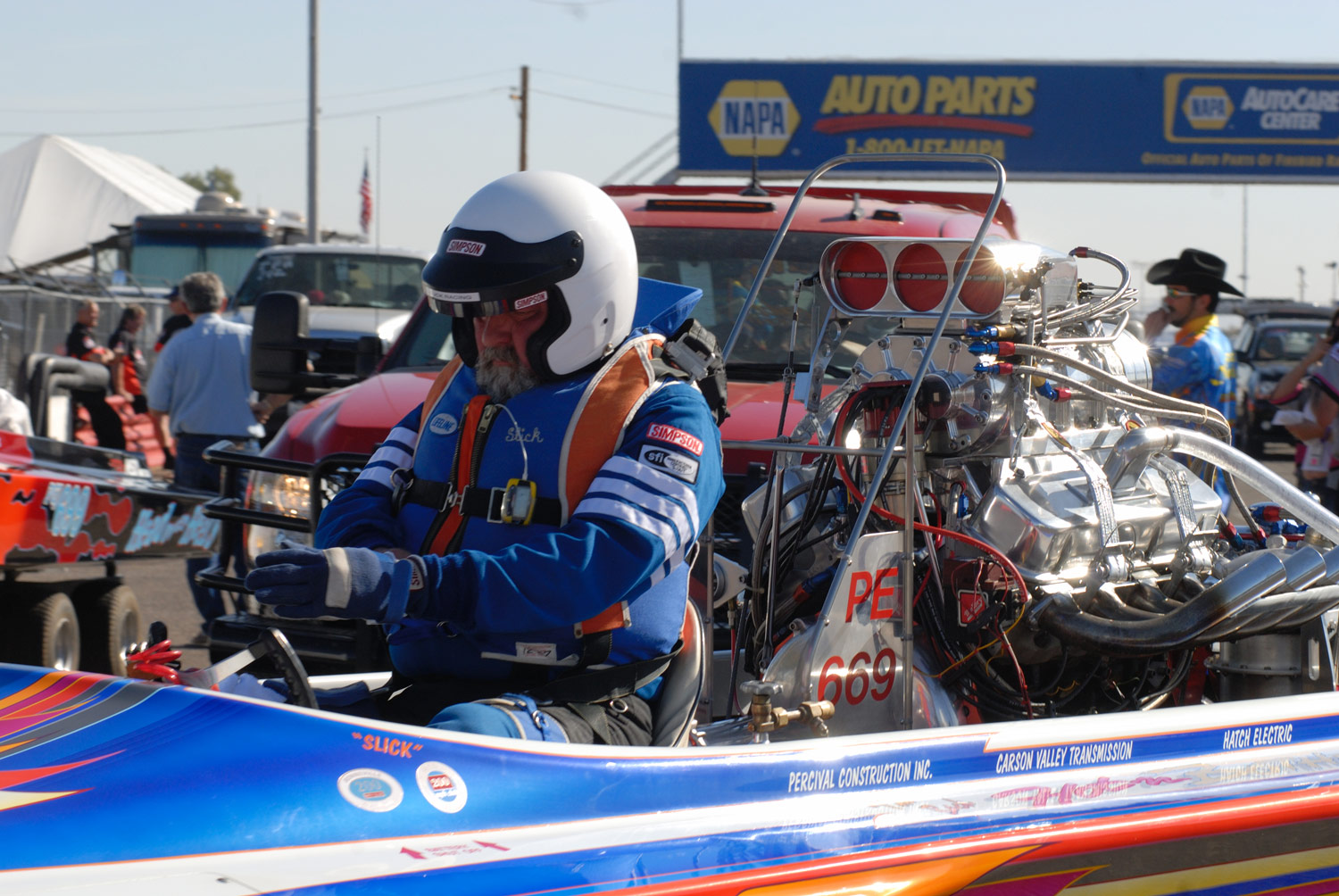 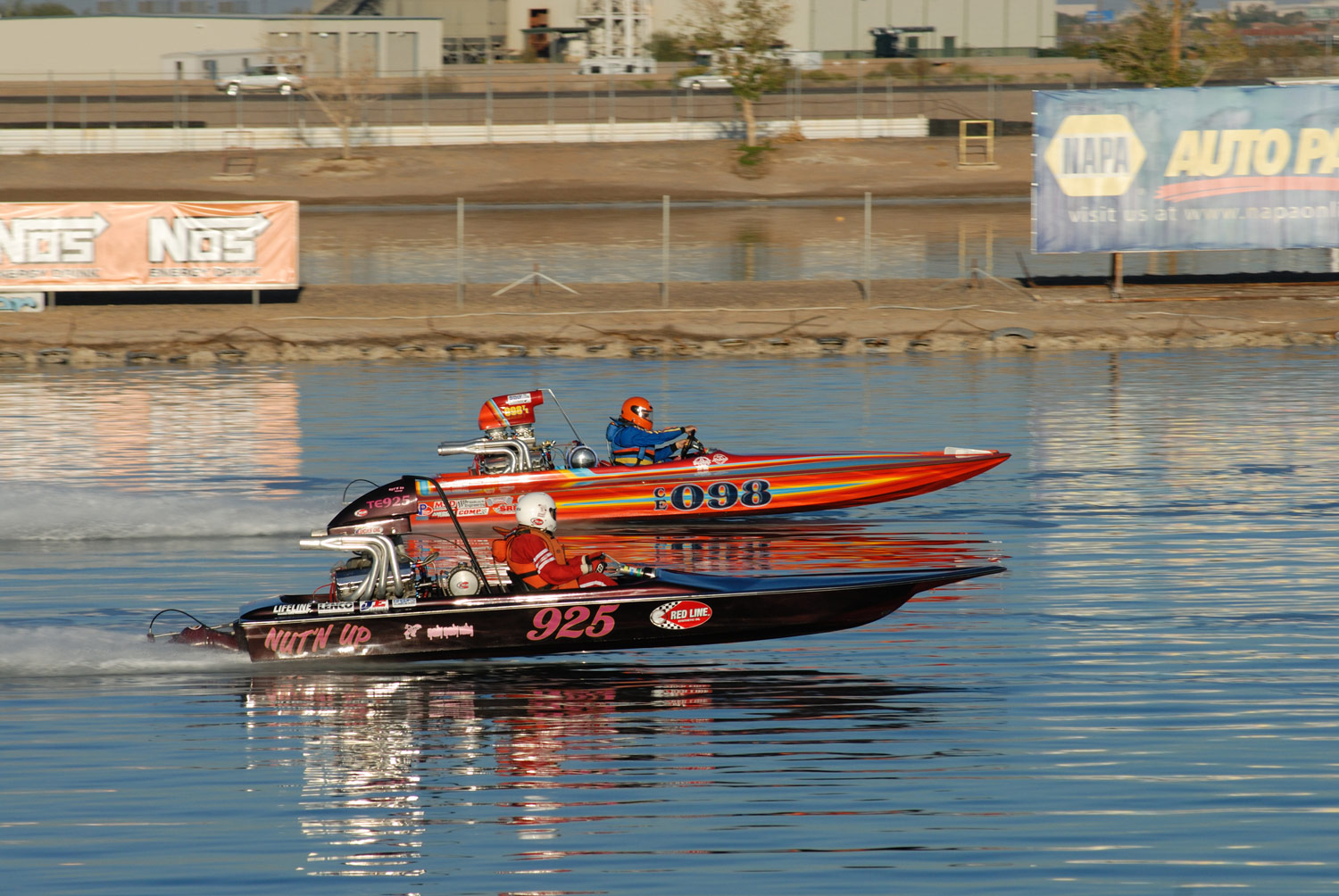 With 21 boats in the class, you just knew it was going to be an all-out war. Top qualifier after four rounds was Dean Maddox with a 120.40 mph/9.011 in “Spirit of Citation with Walter Dulin’s “Du It Again Dulin” in the runner-up slot and Andy Haavisto in third driving “Another Quick Piece.” Eventual class champ, Reagan Everett was only seventh in qualifying after a couple of red lights and then back-to-back 9.044 ETs. Everett kind of flew under the radar in first round Eliminations, but found his groove in Elimination round two with a solid win over Chris Starkweather in “Stark Naked”, 9.018 to 9.036. The third round of Eliminations Everett got the win when top qualifier Dean Maddox broke out with an 8.806 ET and then in the Semis Dulin red lighted to give Everett an advance to the finals. In the showdown for the title, Everett just flat beat Andy Haavisto for the win with a 112.60 mph/9.074 to 101.40 mph/9.185. 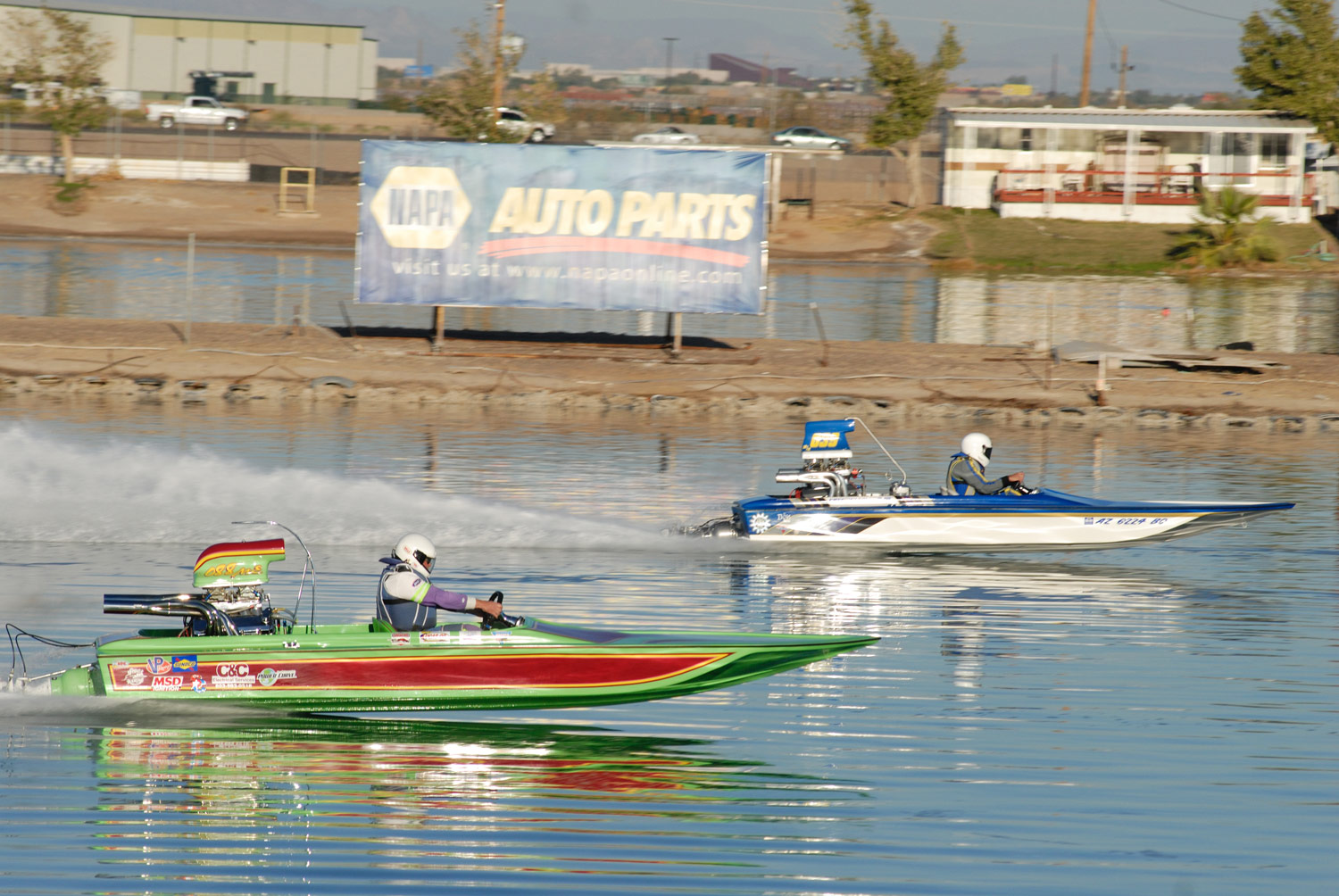 Greg Carr’s “Ain’t Scared” had it all dialed-in in Mod Eiminator. His first qualifying run of the day was an on-the-money 10.000 ET that netted him the top qualifier position going into the Elimination rounds. Round one proved tough for Carr, however, as he went up against the 10th qualifier, Larry Florez in “Just a Lil More.” Carr eked out a win over Florez, 95.00 mph/10.049 vs. 100.94 mph/10.062 thanks to a faster reaction time at the start, .056 for Carr compared to .170 for Florez. That victory them earned Carr a bye run/single in round two. In the Semis, Carr got the win thanks to a bracket break-out on the part of Kevin Kraft in “Whacker Smacker” with a 9.950 ET. In the finals, Carr played it cool as Josh Patridge red lighted in “Lights Out”. Carr registered the win with a 99.14 mph/10.033. 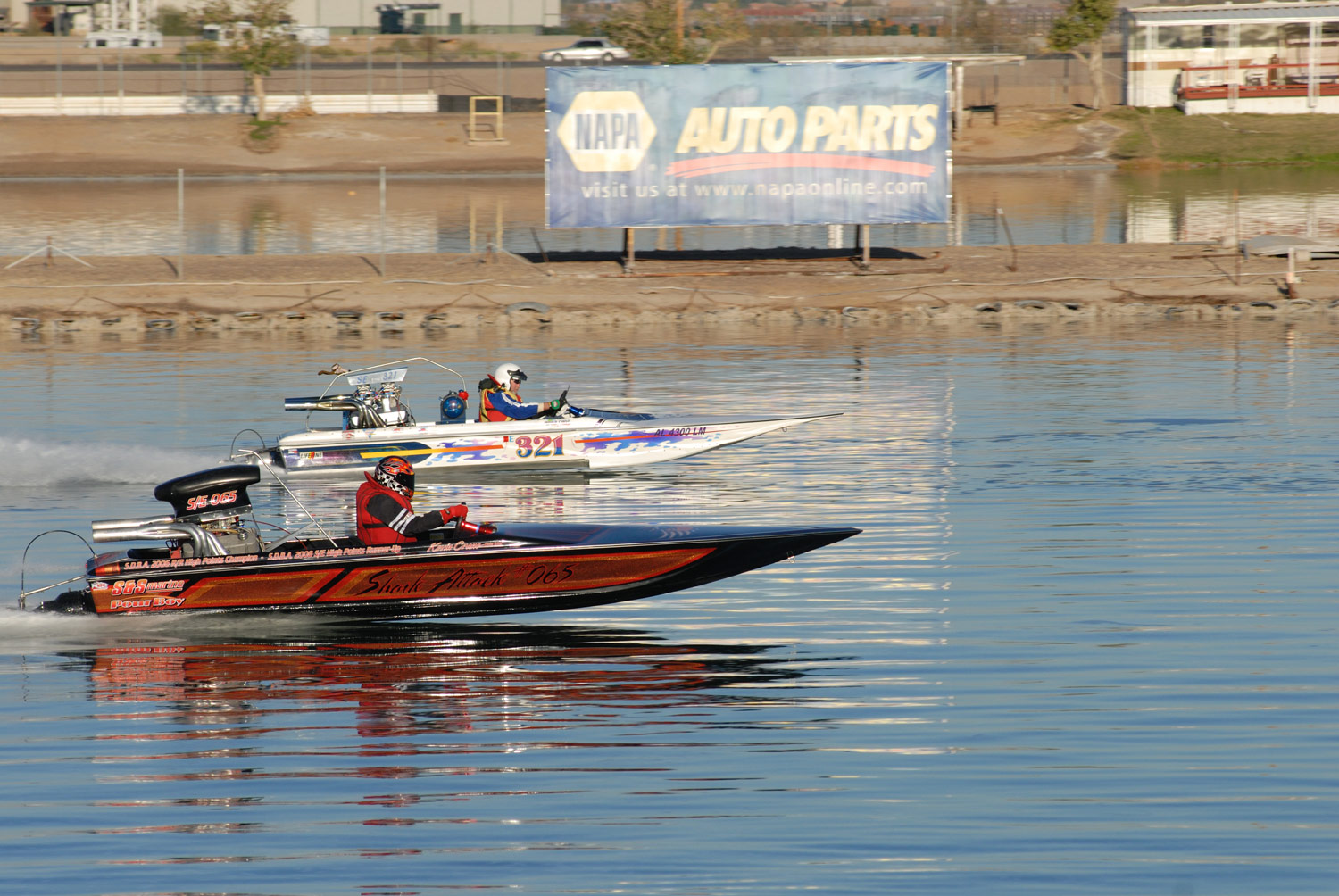 In qualifying, Mark Creel was no better than middle of the pack with slightly better than average ETs for this highly competitive class. Even with consistently quick reaction times, Creel’s “Play Time” qualified ninth which put him in the lower half of the bracket of 15. Al Zemke’s “Flexible Flyer” from Bend, Oregon took the top slot with a 11.002 ET and a top speed of 88.70 mph. As luck would have it, Creel faced-off with Zemke in the second round Eliminations and Creel beat him on reaction time, .110 vs. .489 which was enough to make the difference at the finish line 11.116 ET to 11.139. In round three Creel got past Bobby Laster in “Fade to Black” thanks to a red light, and then a showdown in the finals with Kevin Crane in “Shark Attack.” Again it was Creel, quicker on the pedal at the starting lights for the win with a 88.50 mph/11.248. 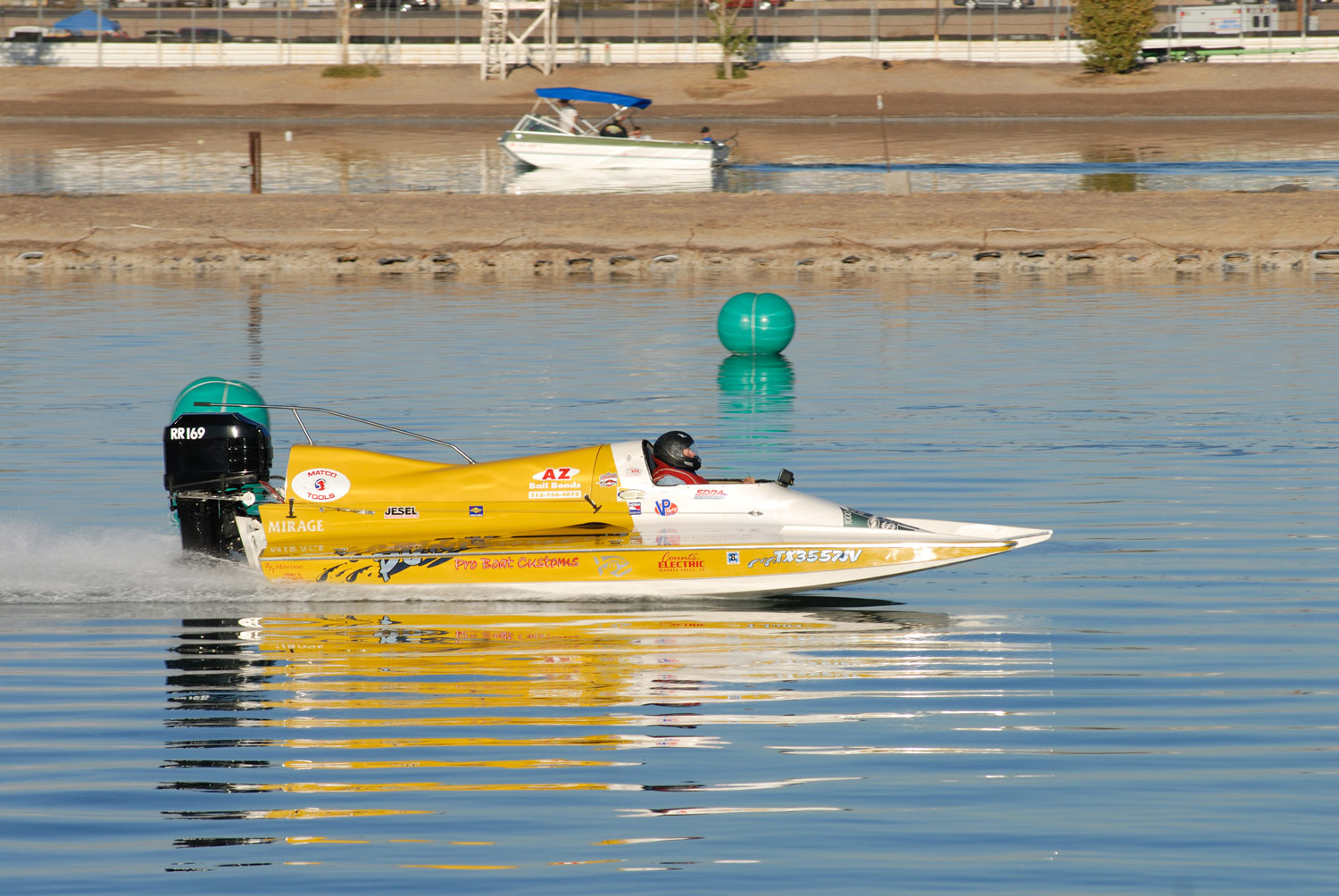 In the Finals, it was the number one qualifier, Keith Turley driving “Gitter Done” up against the tenth place qualifier, Chris Osbourn in “Capital Punishment.” In the Semis, Osbourn picked-up a narrow win over Roger Sayles in “El Bandito” while Turley took a single. Unfortunately for Turley, he broke in the Finals giving Osbourn the easy victory.* 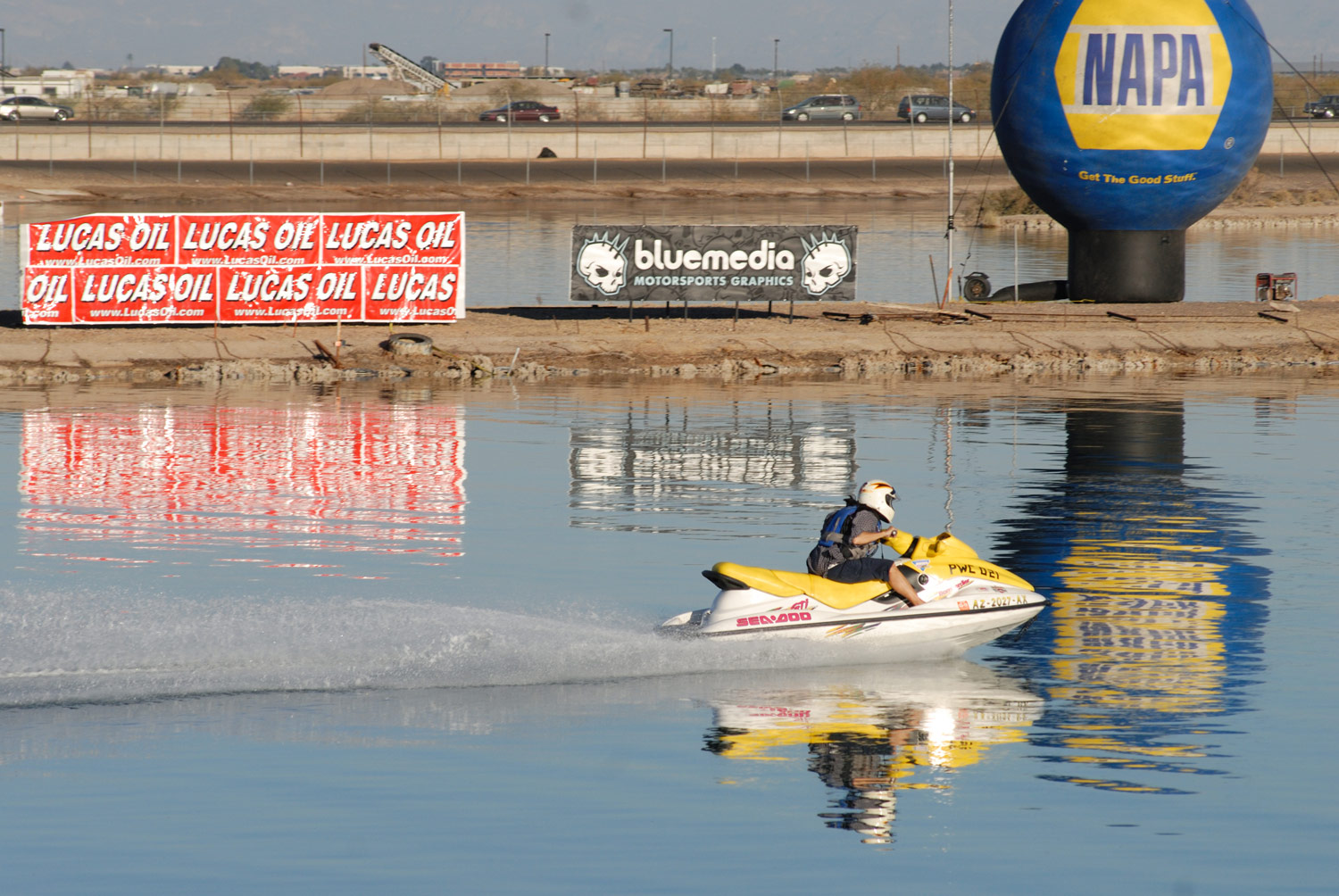 It was a two-boat showdown in the Personal Watercraft class. Elizabeth Sayles driving her Sea Doo, “El Bandito” against the “Texas Slingshot” of Curtis Byler. It was a handicap pairing with Elizabeth given a sizable head-start that Curtis couldn’t over come at the finish line.
Reactions: DUN 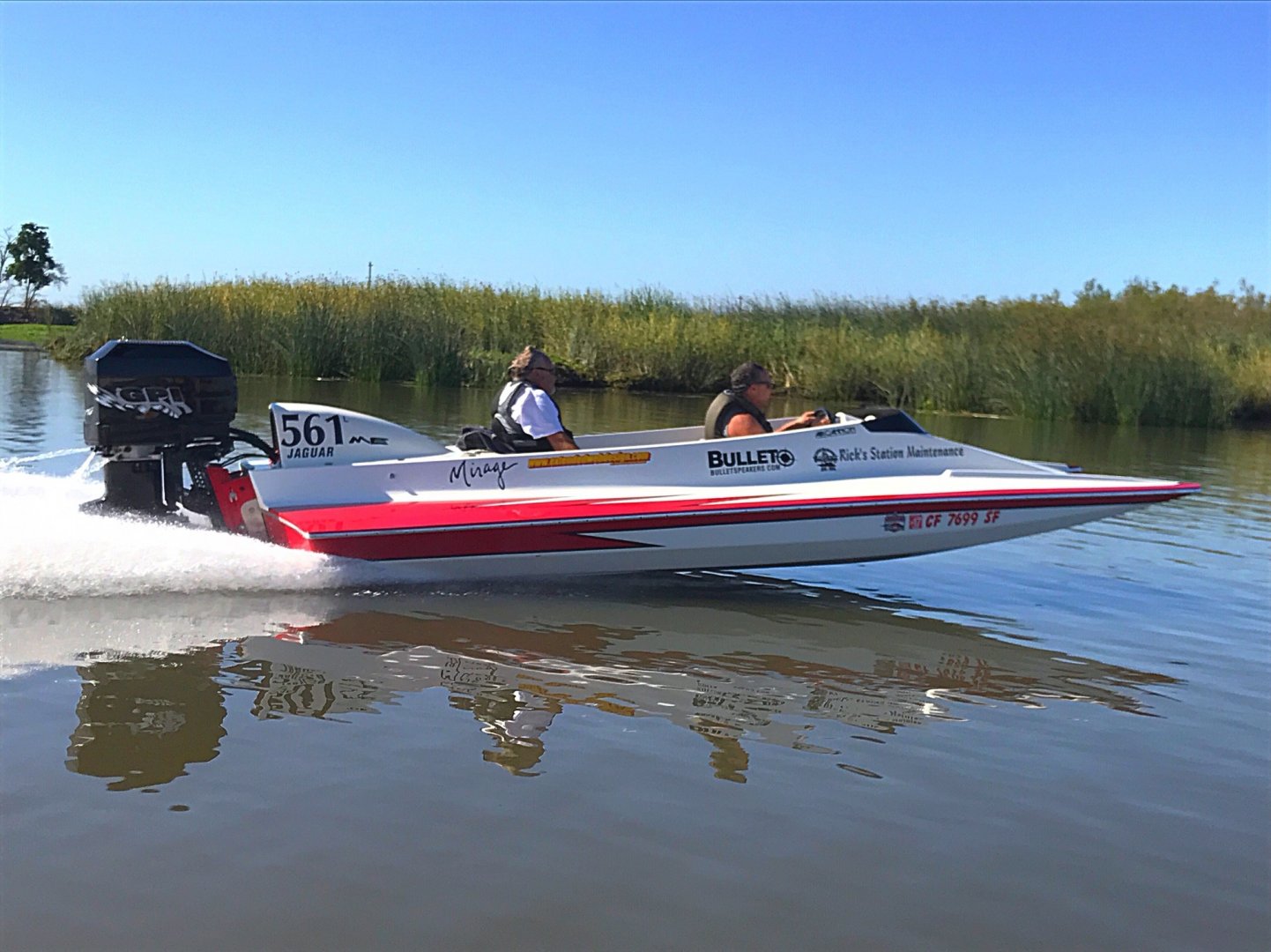 ven my slow sorry ass made the article (no pic) in Modified Eliminator..those were the days..still have and use boat for Delta-Lunch-Bunch rips regularaly