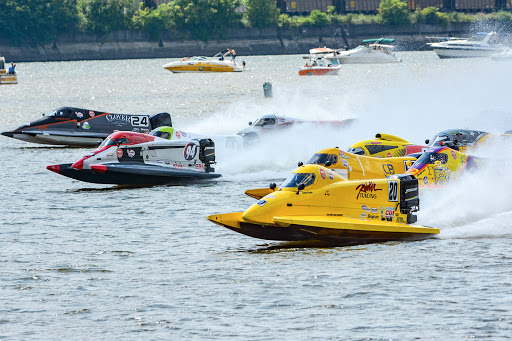 In celebration of Lake Havasu City, Arizona’s famous London Bridge and its 50th anniversary, powerboat racing will once again dazzle the shores of the city with the running of the beloved Lake Havasu Classic Outboard Championships. The powerboat racing event will be held October 15-17, 2021, and will be conducted by the prestigious NGK Spark Plugs Formula 1 Powerboat Series, renowned for its heart thumping high-horsepower racing excitement performed by world class international powerboat racing stars.

The race headquarters and free fan viewing will be at the Nautical Beachfront Resort at 1000 McCulloch Blvd. N, overlooking Thompson Bay, which long-time powerboat fans will remember as being the original location of the championships dating back to 1964. Many Havasu Classic stars from the past will also be in attendance to revel in the excitement of this highly anticipated racing event, which includes the rededication of the city’s famous London Bridge.

The winningest powerboat driver in history, the legendary Bill Seebold, will host the Racers Reunion driver’s party, pairing Havasu racing legends with vintage race boats of historical Havasu significance, which will also be on display for the fans. With the NGK Series event being a rare double header, this ensures that racing fans will enjoy three full days of action-packed excitement featuring three classes each day: Formula 1; Tri-Hull and Formula Lights.

The city’s founder, Robert P. McCulloch, Jr. was the first to initiate the outboard championships at Lake Havasu in 1964, and with his visionary skills, the race soon became a Lake Havasu Thanksgiving weekend tradition, drawing competitors from every corner of the globe for high stakes cash and prizes. As the enterprising owner of McCulloch Motors, he later purchased the then-sinking London Bridge in 1968, numbered its granite blocks, and then shipped the pieces of noble English history to the USA. Upon their arrival in Lake Havasu, McCulloch then resurrected the granite blocks in the exact same order over man-made Bridgewater Channel, a feat that was completed 50 years ago, creating a tourist mecca in the heart of the Arizona desert. Lake Havasu City continued to host the Lake Havasu Classic Outboard Championships through 1990.

The NGK Spark Plugs Formula 1 Powerboat Series, and its director Tim Seebold, aim to resurrect this historic event and reignite the prestige of world class powerboat racing to the city’s beckoning shores. “Lake Havasu and the Classic have a special place in our families’ hearts, we are honored to be part of this historic 50th anniversary event for the city,” remarked Tim Seebold. “The powerboat racing world’s historic alignment with the City and Classic will once again be front and center showcasing the excitement to the fans on the shores of Lake Havasu.”

“We are thrilled with the enthusiasm of the Seebold family and NGK Spark Plugs to put on this nostalgic race to help to pay tribute to Robert P. McCulloch and the birth of the city,” said Terence Concannon, President/CEO of Go Lake Havasu tourism bureau. “McCulloch’s history of winning outboard races and starting the World Outboard Championships in 1964 is a strong testament to the passion he had for the engines and the sport, which eventually led to his vision of rebuilding the beloved London Bridge here.” About Lake Havasu City:  Lake Havasu City is located on the Colorado River in Western Arizona and attracts more than 1 million visitors a year with its London Bridge, pristine lake, friendly community, abundance of sunshine, and ideal weather. For more information, visit www.golakehavasu.com.

Awesome, can't wait !!
I hope I have a trailer by then. I'd LOVE to come to this!