Even by today's standards, the technology and craftsmanship of the "Hot Rod Magazine Special" (HRMS) would be remarkable. The fact that the boat was built sixty years ago makes the accomplishment a little like the construction of the ancient pyramids in Egypt....how did they do that"? The hull is 20-feet long, all-wood with a fiberglass skin, and a moderate vee-bottom, the first that Rayson Craft ever built. What makes the design so unique is that it has no lapstrakes and the chine is simply a flat hard corner with no reverse or downward angle to it. According to reports, when the boat was initially tested, it handled poorly and was an uncomfortably wet ride. Skid fins were added on both sides of the cavitation plate which didn't help much. Then, Rudy Ramos came up with the idea to add a stainless steel one-inch thick splash rail the full length of the chine line. The modification worked wonders and a monster was born. This lesson convinced Ramos to incorporate a reverse chine design feature on all subsequent Rayson Craft vee-bottom models.

Knowing that the HRMS was going to compete at the roughest race courses of that time, it was built incredibly stout. The bottom has a two-inch thick keel, four full length stringers and a 5/8 inch thick floor. The deck, which was built by master wood worker Harlan Orrin at the Rayson Craft shop, is ribbon-striped mahogany with a clear four-ounce glass outer skin. 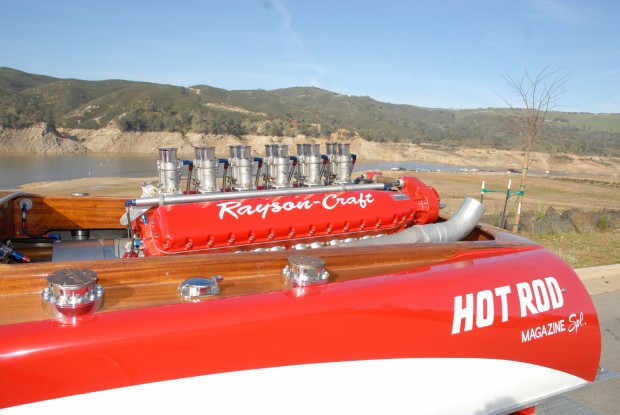 The motor is a WWII surplus 12-cylinder Allison which came out of a P-51 fighter plane. With 1710 cubic inch displacement, the naturally aspirated Allison churns-out an amazing 2000 ft. lbs. of torque in the mid 2,000 rpm range (about 850 horsepower). The engine runs off a 24-volt electrical system and since it's an aircraft product, redundancy is evident with dual ignition magnetos and two spark plugs and four valves per cylinder. The induction system is six Weber two-barrel 48mm carburetors disbursing a diet of Av-gas at the rate of 95 gallons per hour. Internally the engine has 9.5:1 compression and circulates 18 gallons of oil through its dry-sump lubricating system. Remarkably, thanks to the use of a lot of aluminum parts, this behemoth weighs less than 1,200 pounds or about the same as a conventional supercharged big block V-8
. 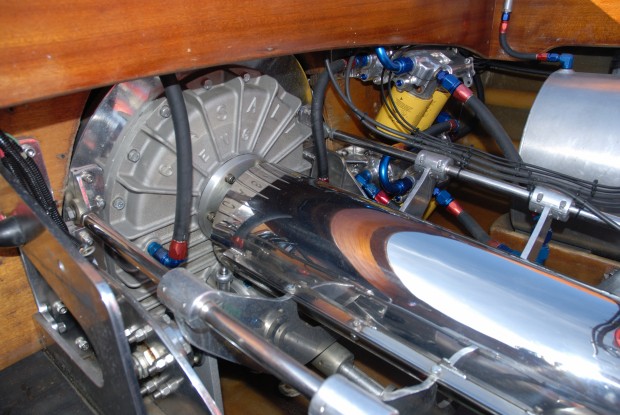 Possibly the most challenging task was creating a gearbox to reliably accommodate the massive torque. Fortunately, Ramos' father owned a Southern California foundry and he was good friends with Ernie Casale, the leading manufacturer of gearboxes and mechanical steering systems for automotive (midgets and Indy cars) and power boat racing in the 1960s. What they came up with was a one-off split-case 18 degree V-drive that weighs nearly 300 pounds. The V-drive has a 2.76:1 overdrive gear ratio and is both water jacketed for cooling and lubricated with a separate dry sump oiling system. The propshaft size is 1-1/4". Estimated cost of manufacturing the V-drive alone was approximately $20,000. 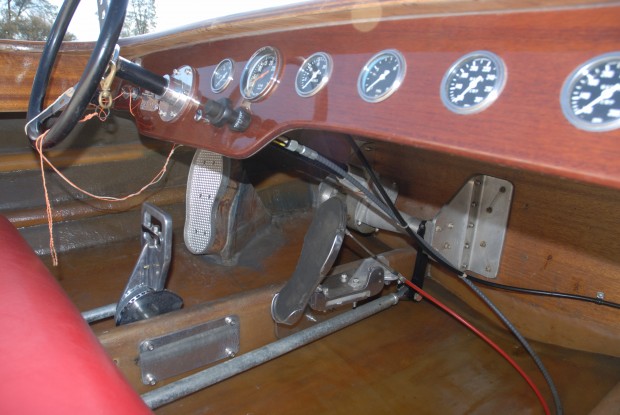 As to be expected, everything in the boat is heavy-duty. When Fell was doing the hardware restoration he made the 40-inch long custom motor mounts out of half-inch thick aluminum plate. The V-drive plate is 3/4 inch aluminum and the driveshaft connecting the engine to the gearbox came from a Peterbilt truck. Since the boat had been repainted a light blue, John relied on the services of custom painter Swede in Orange, California to capture the original red and white color scheme, refinish the mahogany wood deck and recondition the seamless hull and deck cap.

Master flatbottom and cracker box builder Bob Patterson decided to one-up Rudy Ramos and his stable of Rayson Craft marathon boats with a 1960 build of his own, a 23' 10" all-wood flatbottom christened "Super Cinders." Patterson's choice of power was a 1940s supercharged 1710 cubic inch Allison V-12, pushing the horsepower bar up in the 1300 to 1400 HP range at only 2,200 rpm. The engine that is presently in the boat is a duplicate to the original, again built by Patterson and John Wolfe at Patterson's Van Nuys, California shop. Because of his involvement as a long-time owner of a vintage unlimited hydroplane, Patterson has one of the few engine dynomometer facilities in the country capable of handling an engine of this size and output potential. 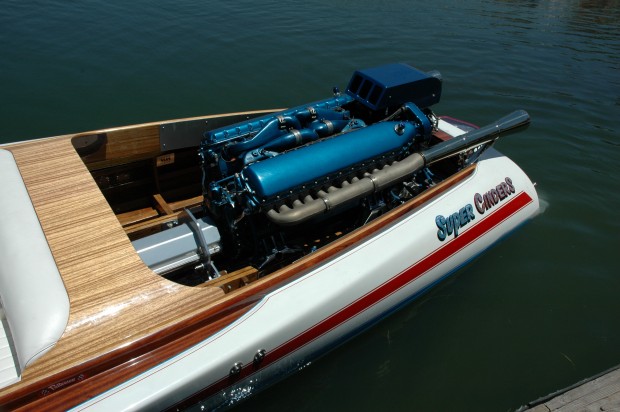 The bottom configuration of "Super Cinders" is essentially that of a stretched and deeper freeboard version of an 18-foot Patterson SK hull with a mammoth 90 pound solid steel outboard style rudder hanging off the transom. Controlling this giant rudder is an intricate, well engineered cable and pulley steering assembly which is also original equipment. What isn't so conventional, however, is the fact that Patterson decided to cover the glass-over-wood hull bottom with aluminum sheeting for extra strength and toughness. 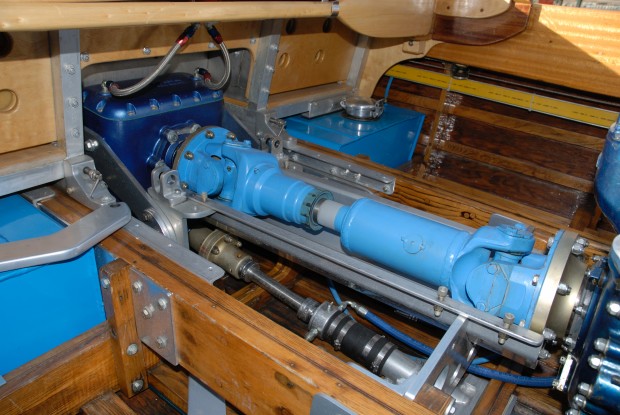 Because of its incredible horsepower and torque capabilities, "Super Cinders" utilizes a rare Dan Arena built direct drive gearbox. There's no neutral or reverse gear so when you start the engine, the propeller turns immediately propelling the boat forward. Since Patterson wanted to keep sustained racing rpms under the 2,500 mark for the Allison engine, a 2.75:1 overdrive gear ratio was selected. This allowed the boat to cruise a marathon course like Salton Sea in the 80 to 85 mile an hour range for continuous hours on end at little more than half-throttle. For that reason, engine malfunctions during competition were rare.
. 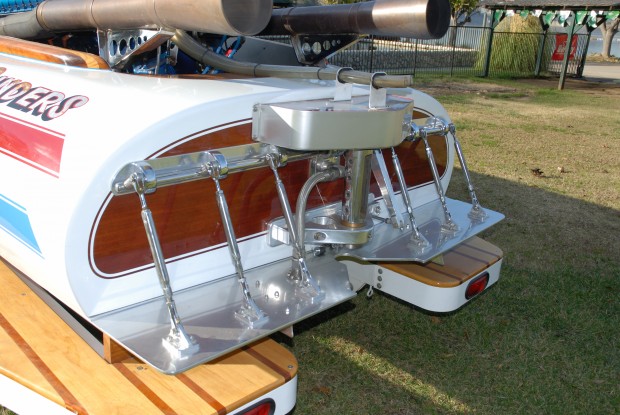 Since the mammoth gearbox is located under the full width driver and passenger bench seat in the main cockpit, "Super Cinders" was designed with a removable mid-ship bulkhead. This allows for access and easier maintenance to the V-drive, driveshaft, U-joint and various running gear components beneath the seat. 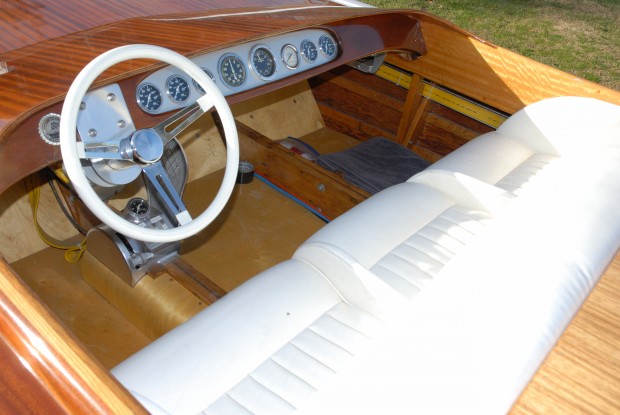 When Mike Leach took ownership of the boat in the mid-1990s, he realized he had undertaken an enormous task ahead. "Super Cinders" had spent the previous 22 years sitting outside, unprotected in a storage yard in the San Fernando Valley and weather and time had taken its toll on both hull and trailer. The mahogany wood deck needed to be completely replaced and the engine was now a single 440 c.i. Chrysler V-8. Fortunately the custom built gearbox was still in place. "The gearbox was really the key to the project," said Leach. "Without that piece I doubt if I would have ever considered trying to restore it as a running boat."
" 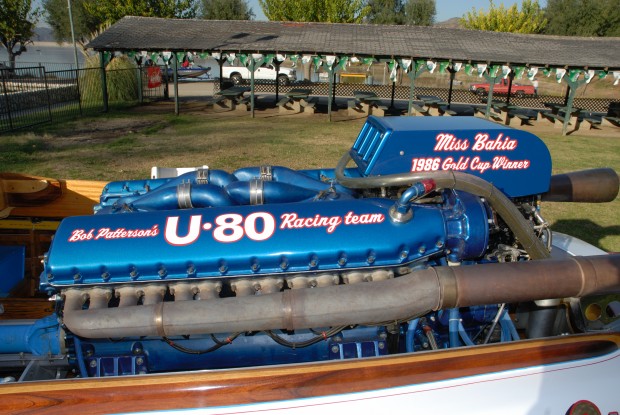 Leach was able to persuade Patterson to participate in the ambitious project, providing the much needed assistance in building another V-12 Allison. Patterson, along with Wolfe and former "Super Cinders" co-driver, Dwight Moody, Sr. and Jr. worked on restoring the hardware componentry to its original condition. The renovation of the hull, deck and trailer became the duties of Leach, his father Bob and Harlan Orrin. The journey was a long one, but well worth it.