Converting a MCI bus into an RV...

ka0tyk said:
We have pleeeenty of storage underneath. But the windows do hurt with heating/cooling. I am going to do a tint with a high UV filter and we ordered special accordion blinds with “reflectix” inside
Click to expand...

Maybe look into the ceramic tint. I read quite a few reviews on it saying how well it works and all....

From the Luxe Retreat Collection. With drama and a mastery of storytelling, Lillian August has created an International lifestyle brand. Her premier collection for Seabrook embraces her love of color and pattern - from elegant archival chinoiserie patterns to clean edited forms, for an urban...

Is that adhesive backed or paste/glue?
K

Sleek-Jet said:
Is that adhesive backed or paste/glue?
Click to expand...

nothing on the back, need adhesive. I used some carpet glue I had laying around. It’ll probably still be there after a hurricane.
K

Is the sofa mounted to the floor, along with seatbelts? If so, how did you accomplish that?
K

havasujeeper said:
Question for ya:

Is the sofa mounted to the floor, along with seatbelts? If so, how did you accomplish that?
Click to expand...

it will be. In the floor there was an existing rail that is welded to every frame support where the original seats were mounted. I'll be attaching both to those rails, not just bolting to the plywood. I'll also be attaching some lap seat belts I purchased to that rail as well.

You can see the rails here: 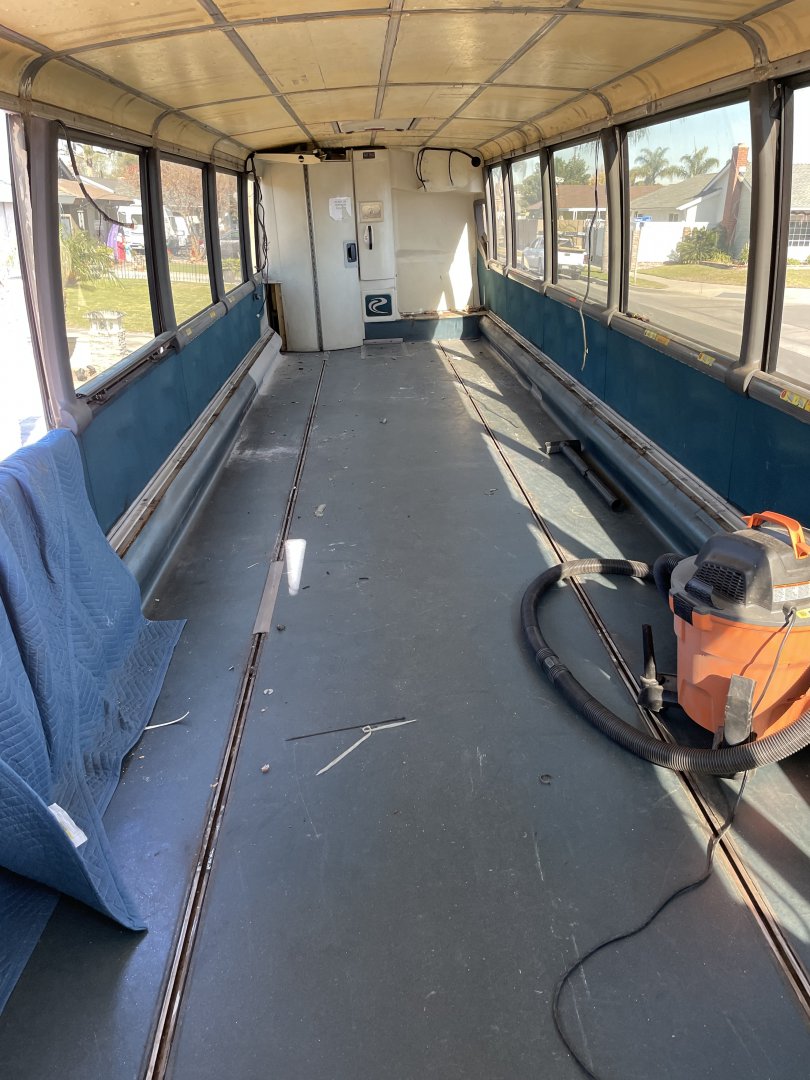 When we toured a few of the high end coaches one of the things I looked at was seating. The majority of them had a similar if not worse passenger seating situation... a poorly built RV couch or wooden dinette mounted to a wooden box that sat on top of a full length subfloor. Also our original bus none of the seats had seatbelts. I'm sure some will chime in with their opinions.

As far as drivers seat I purchased a new one to replace the worn out original seat.
Last edited: May 27, 2021
K

Starting on the ceiling. We installed our air conditioning, covered hatches in the roof with some aluminum plate. 3m 5200 sealed everything. Mounted the toilet and sprayer. Cranking away! 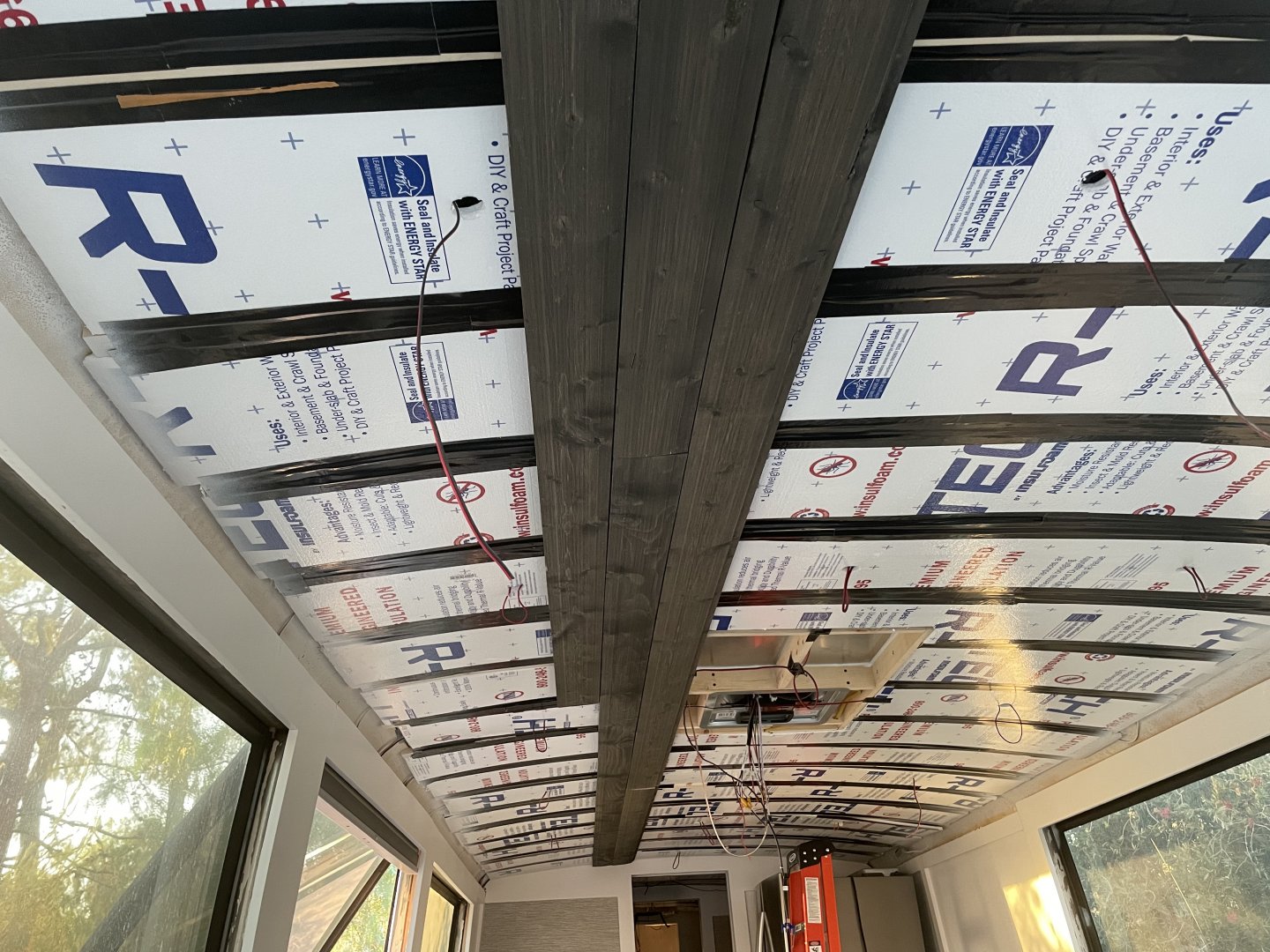 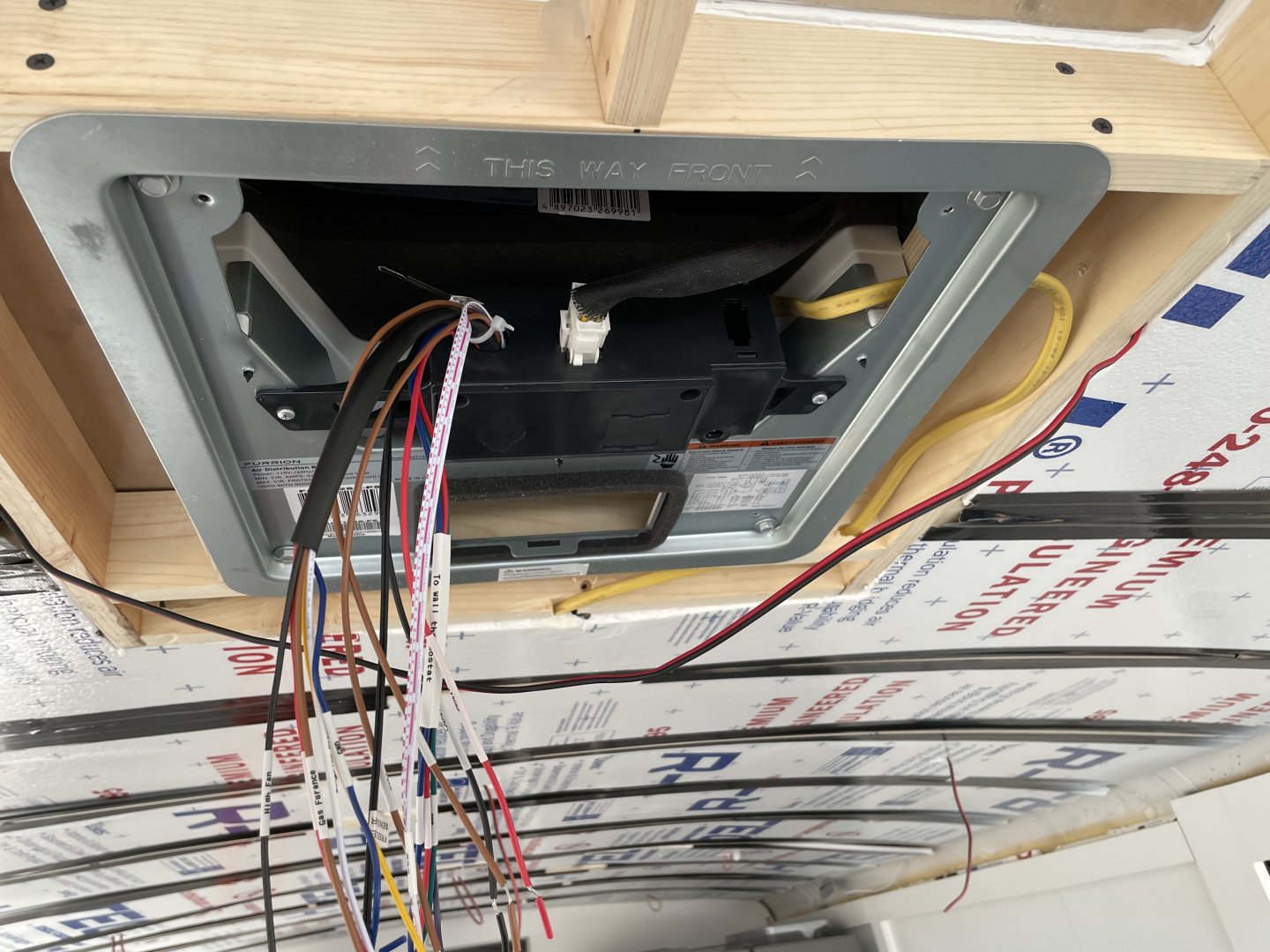 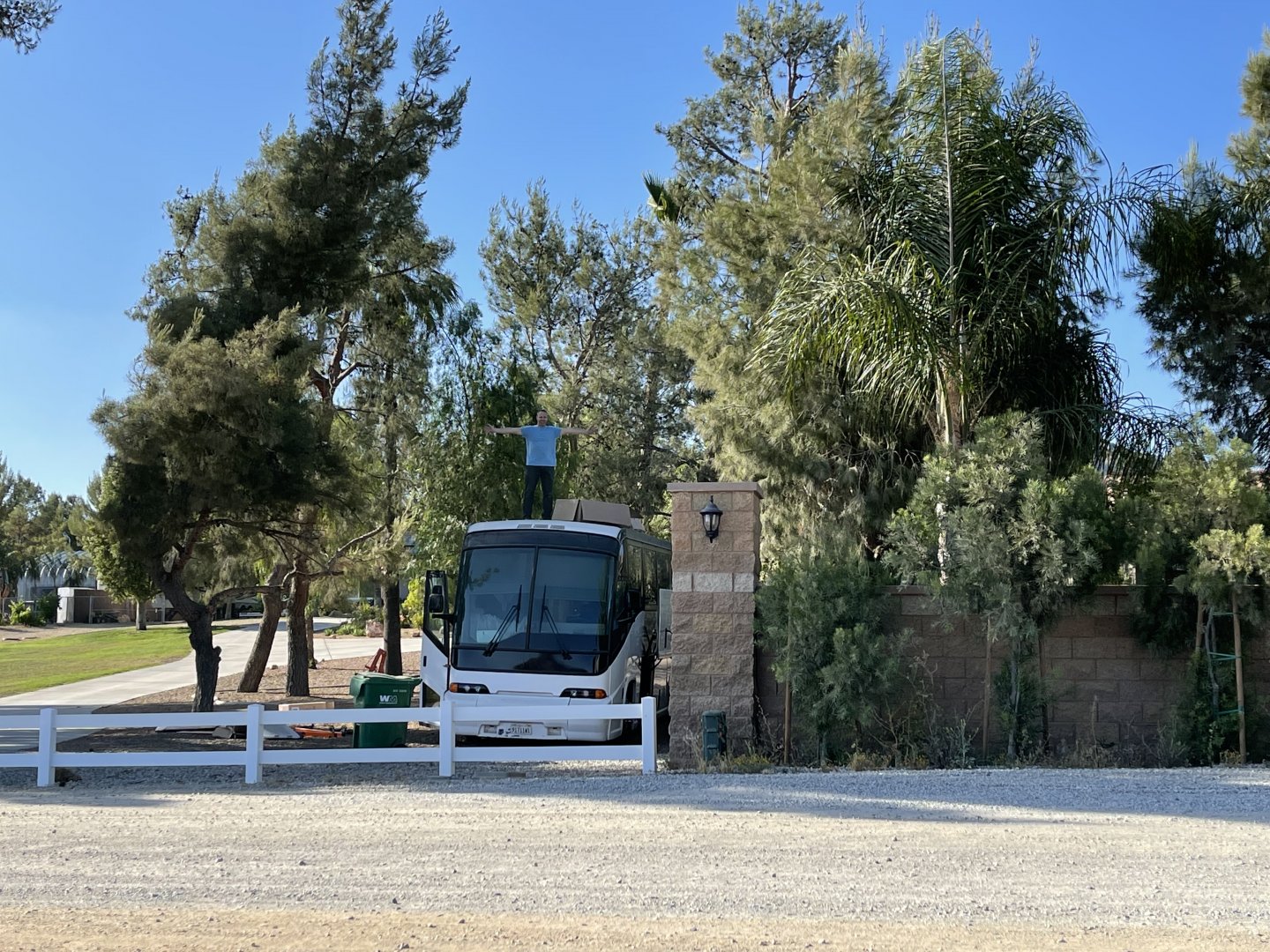 This is a big moment in our bus build. It finally has its own lighting. (On one side of one room at least, technically two zones… kitchen and living room). It might sound like something silly but it almost feels “alive” now. Something about working at night on it with flashlights etc and now we can actually see. We will have a total of 48 of these little led lights in the entire bus ceiling along with dimming functionality. It really picked up the spirits tonight while putting in the ceiling. 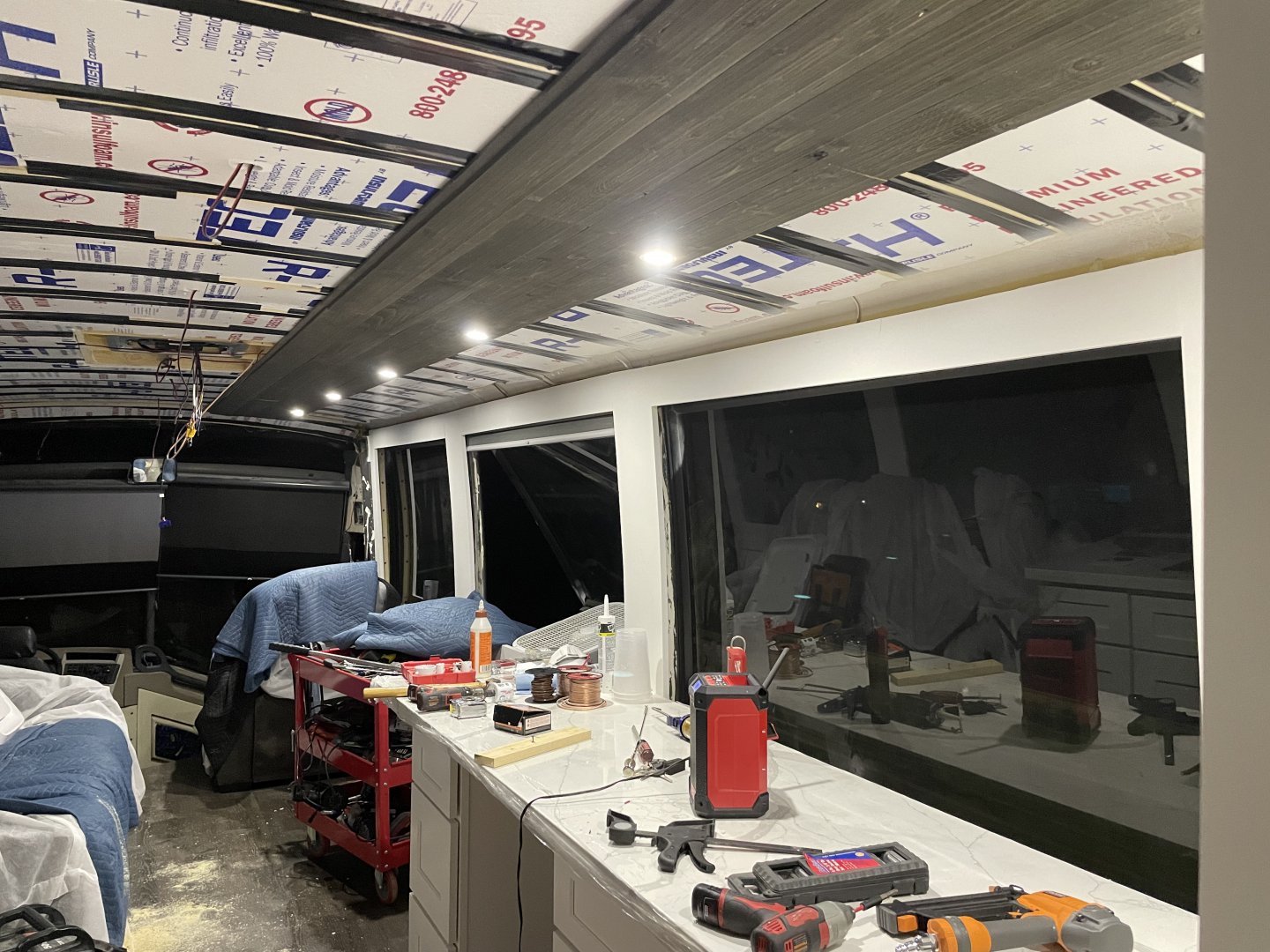 Wow. Quite the project. Impressed with what you are doing

I might have missed it but what specifically are you using for the ceiling paneling/planks?
K

RichL said:
I might have missed it but what specifically are you using for the ceiling paneling/planks?
Click to expand...

It’s a grey shiplap material we found at Home Depot. It was one of the first things we bought for the bus actually and we have kinda based all our interior decisions off of it. It sold out pretty quick we ended up going to 3 diff stores back in like January for it. It has a distressed look to it and I think it works great for a ceiling material. Not something you’d want to touch as it’s rough. 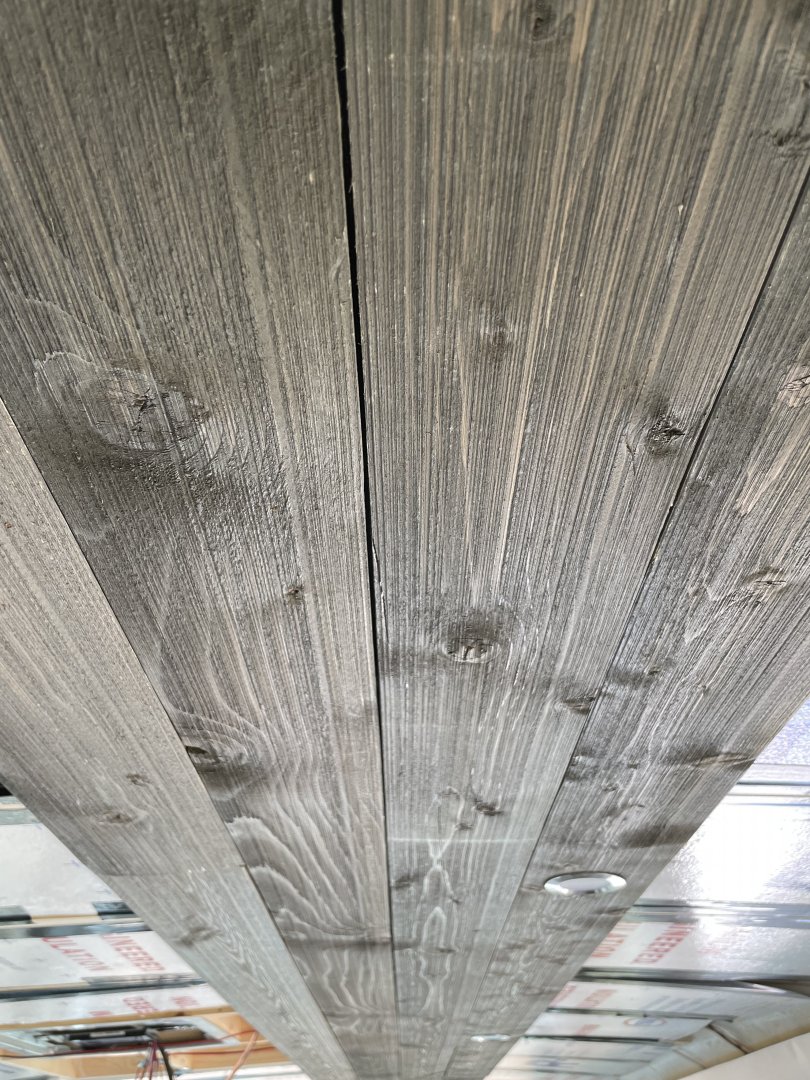 Having your arms over your head the whole time sucks… 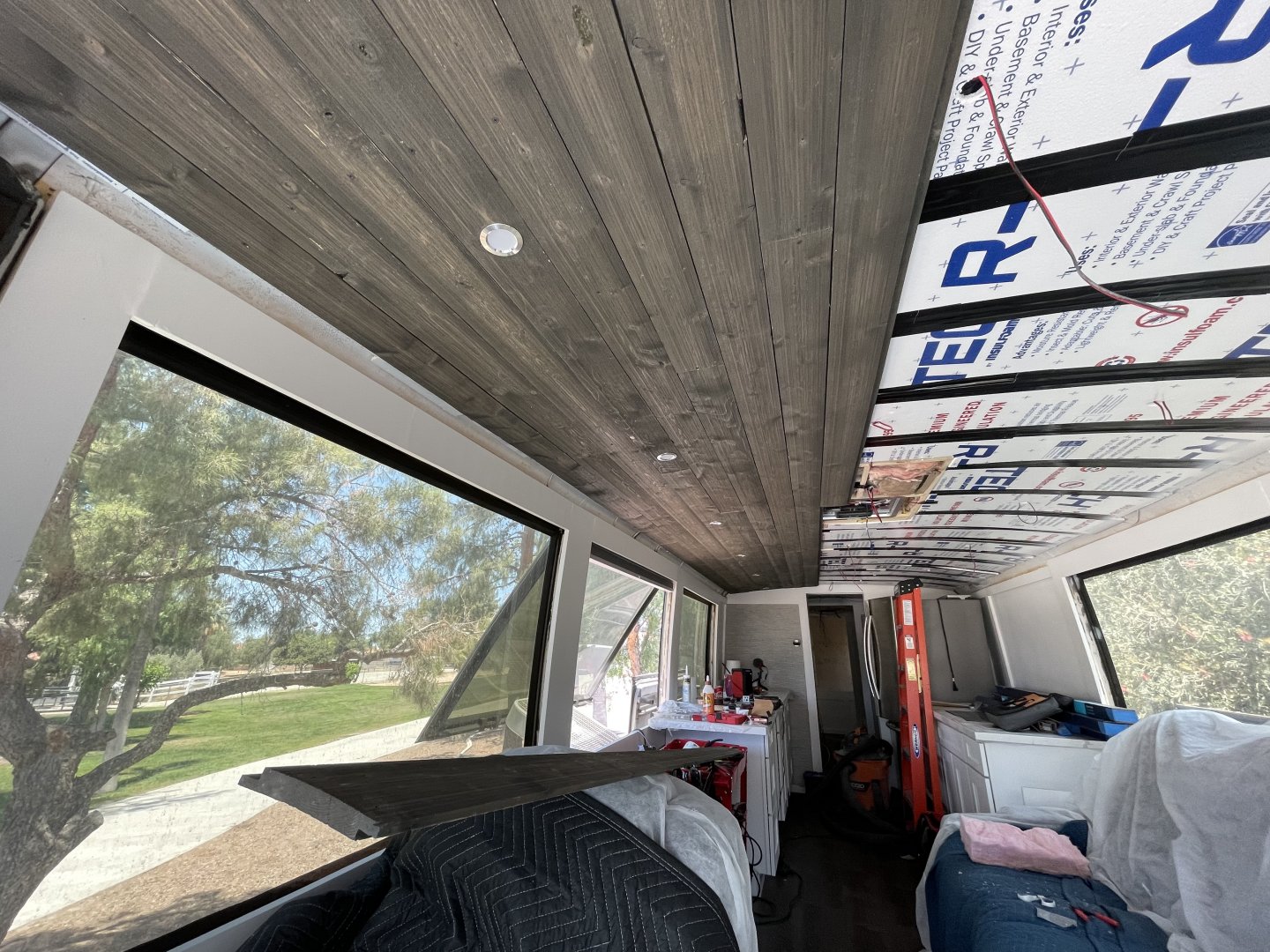 also snagged one of these little guys 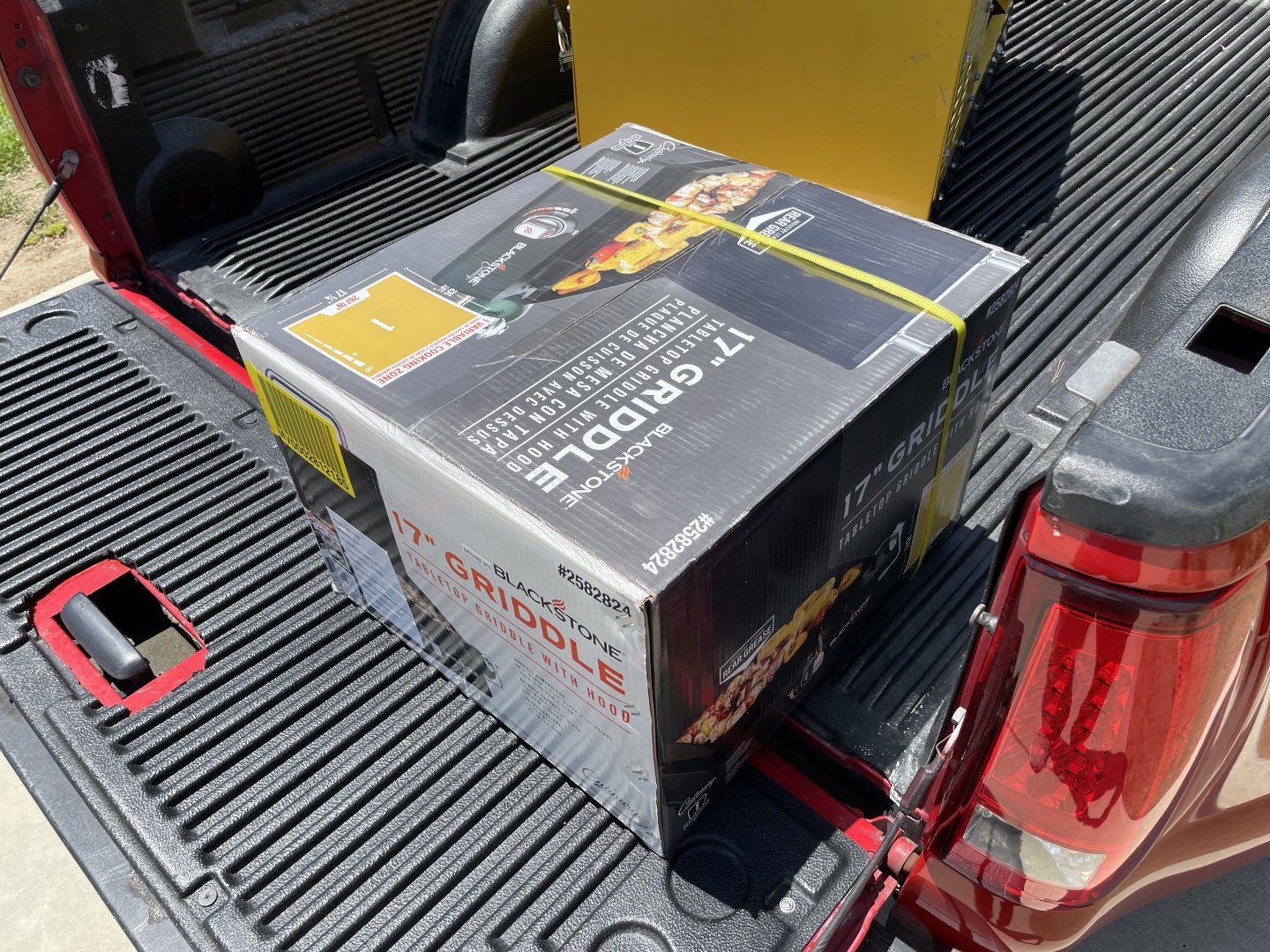 Took it for a quick spin and a wash. 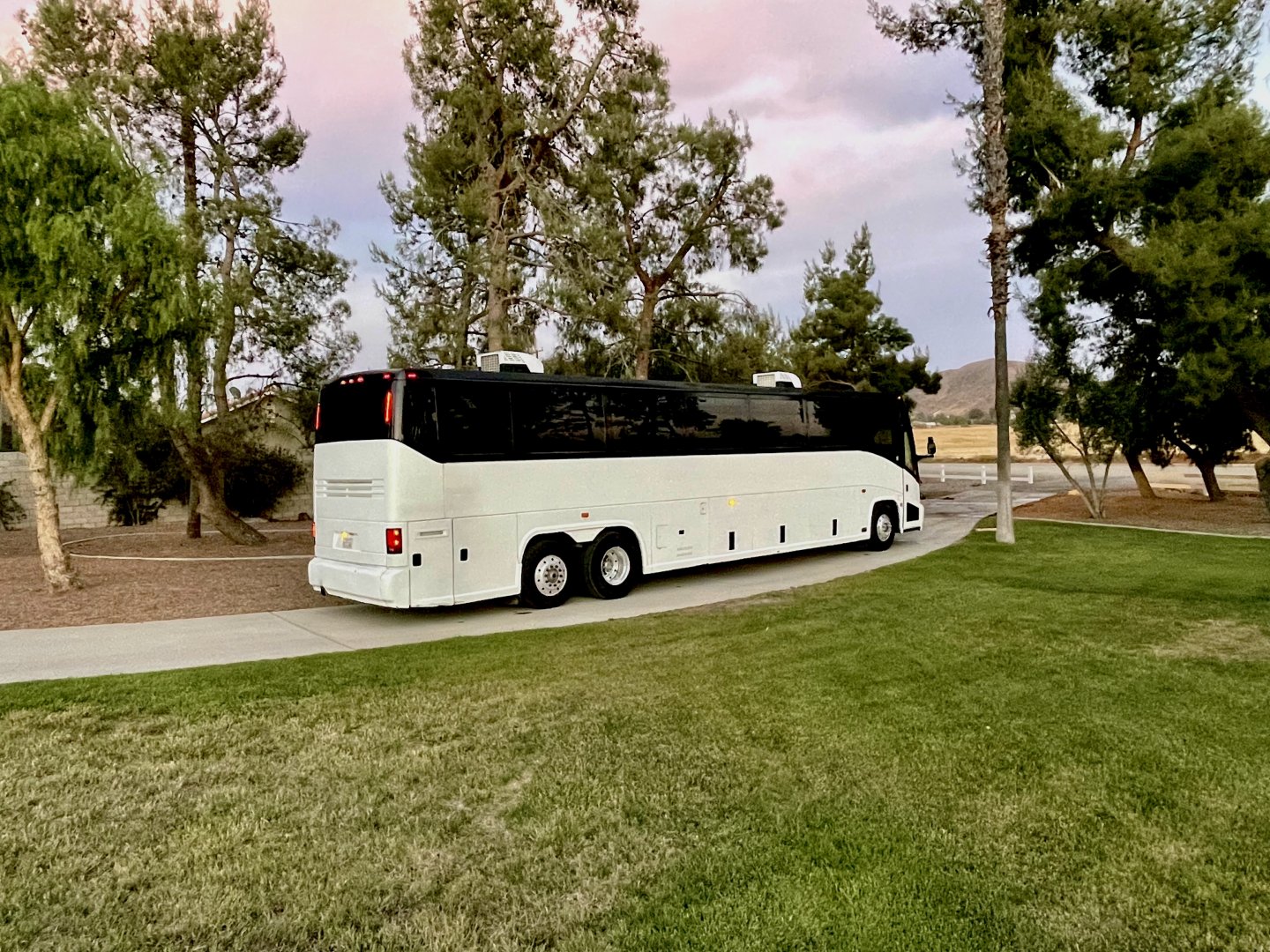 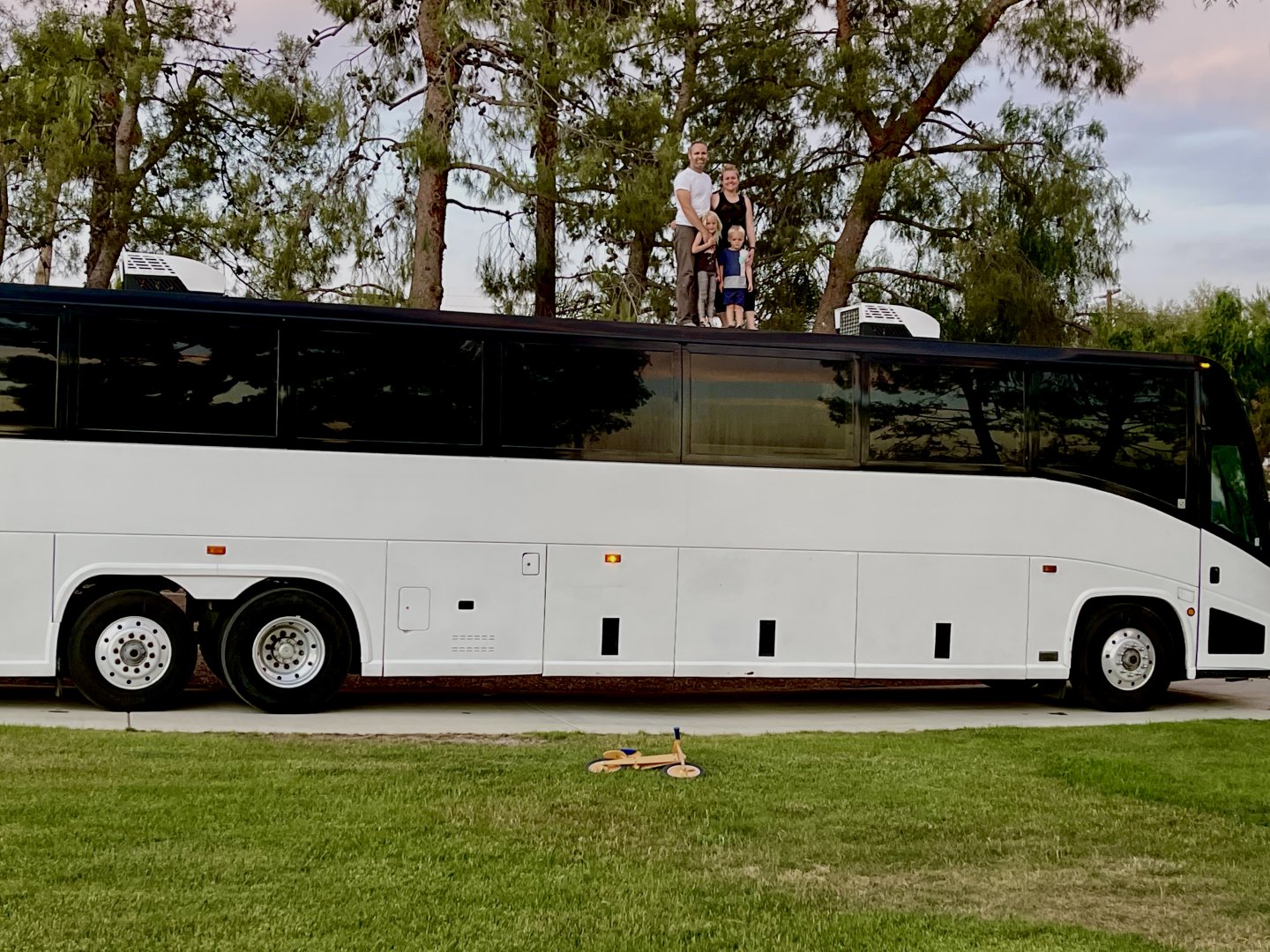 get them wheels polished. LOL

69hondo said:
get them wheels polished. LOL
Click to expand...

Are those steel or alum? If steel its probably just painted silver and that's the best they are going to look.
K

outboard_256 said:
Are those steel or alum? If steel its probably just painted silver and that's the best they are going to look.
Click to expand...

alum alcoa. They do need some love.

Have you thought about adding a roof top vent and prepping it (110v power) for a possible future A/C? Would be MUCH easier to do now and if you don't need or want it, you still have a nice and functional rooftop vent which is really nice for convection ventilation.
K

Almost Off the Grid

You have built a mansion inside of your Bus,incredible.Really looking forward down the road when we read the thread “Building our new home on a awesome property”.Also,really class the way you constantly use the words “our” &”we”.

Another weekend. We did tile, more grass cloth. I welded up the tv mount for the front, the bunk beds and ladder. 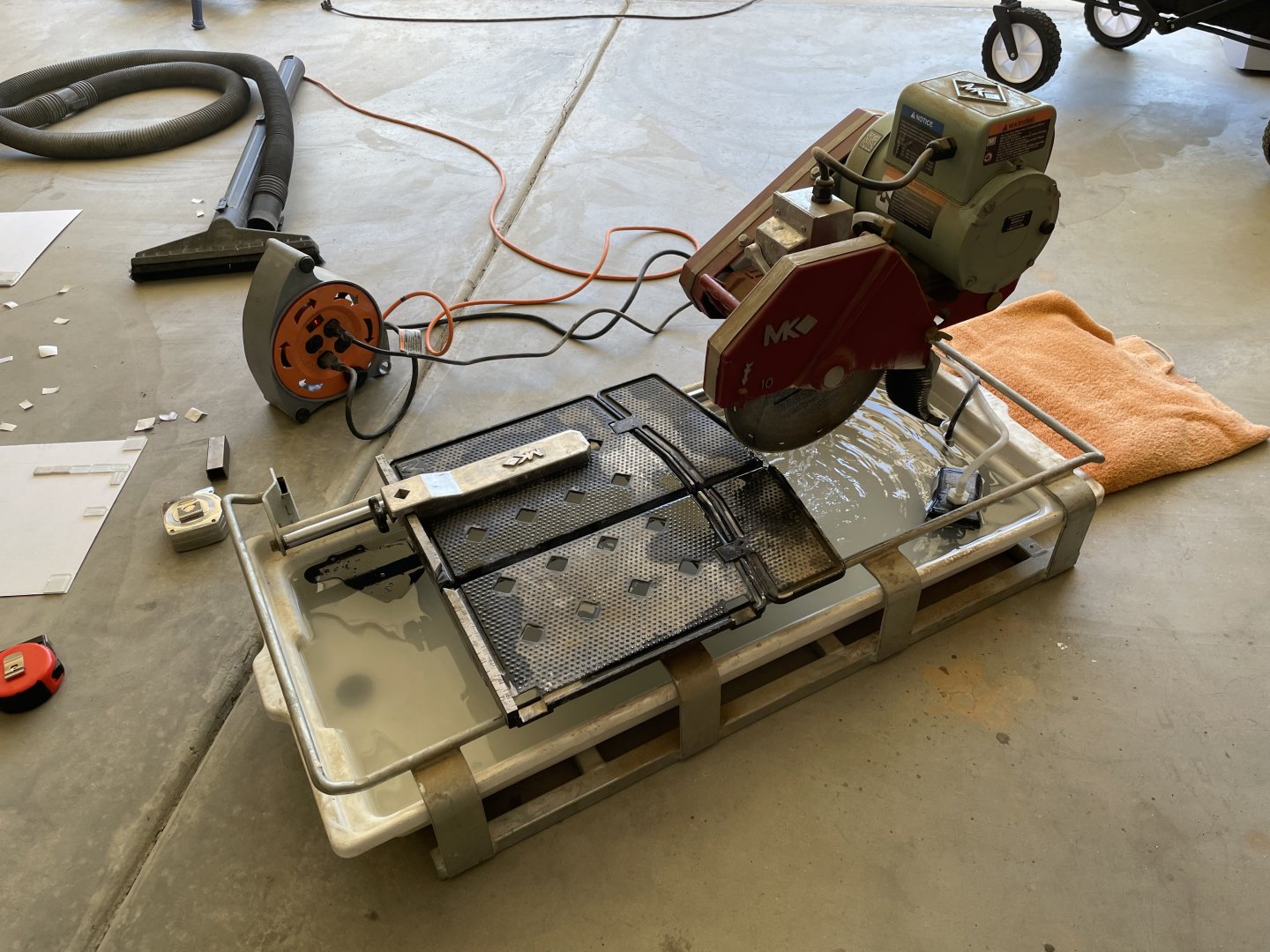 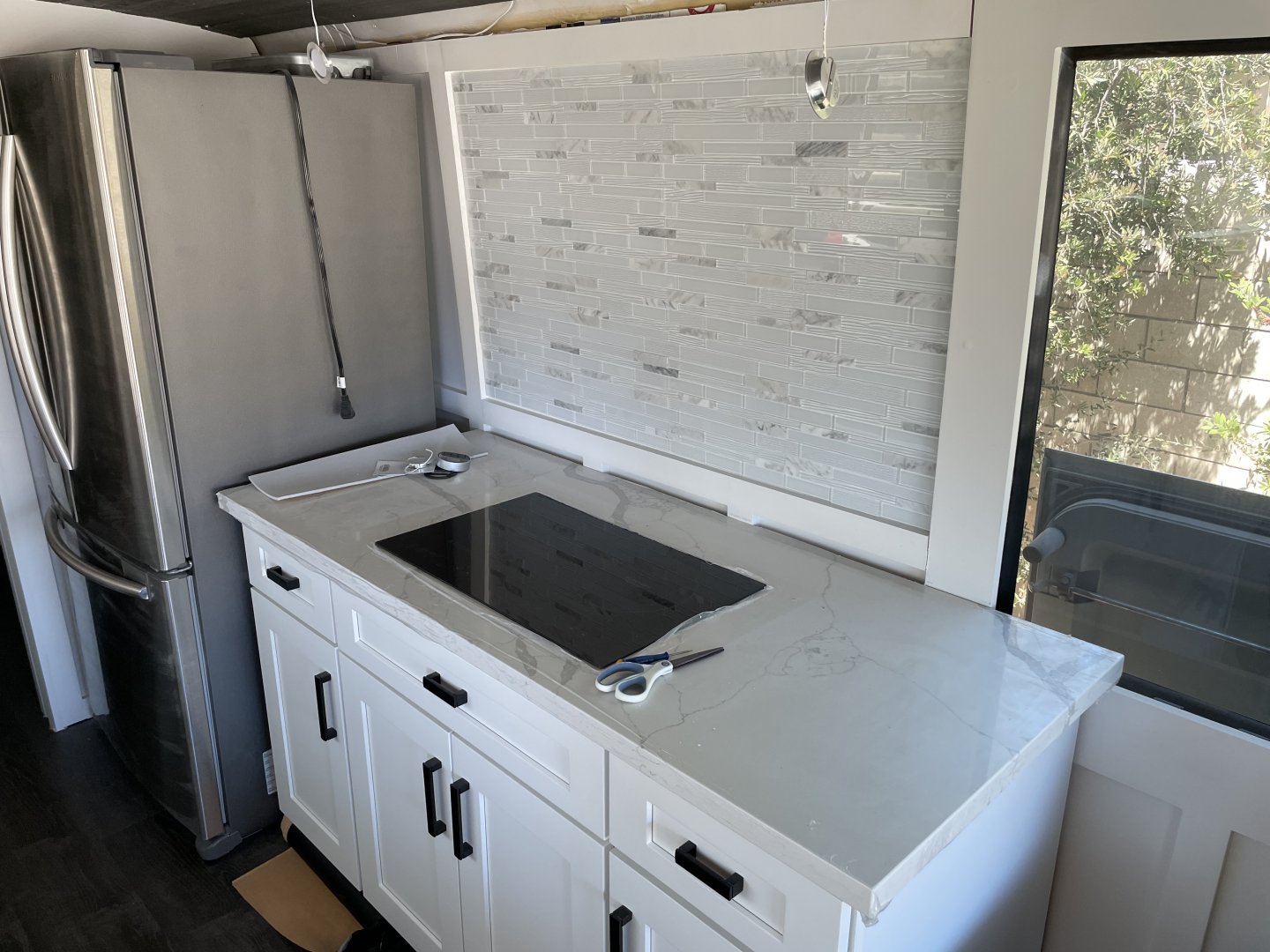 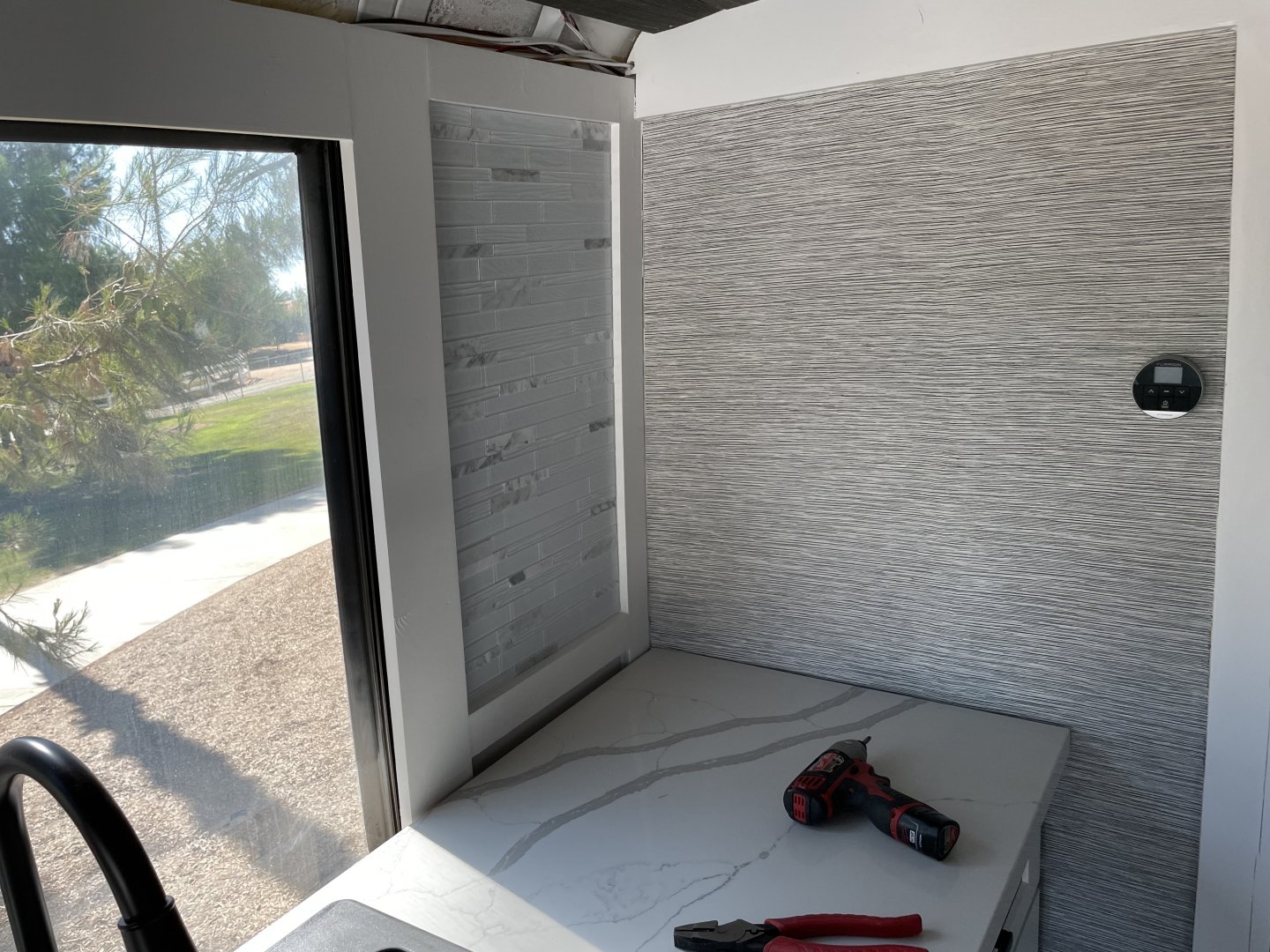 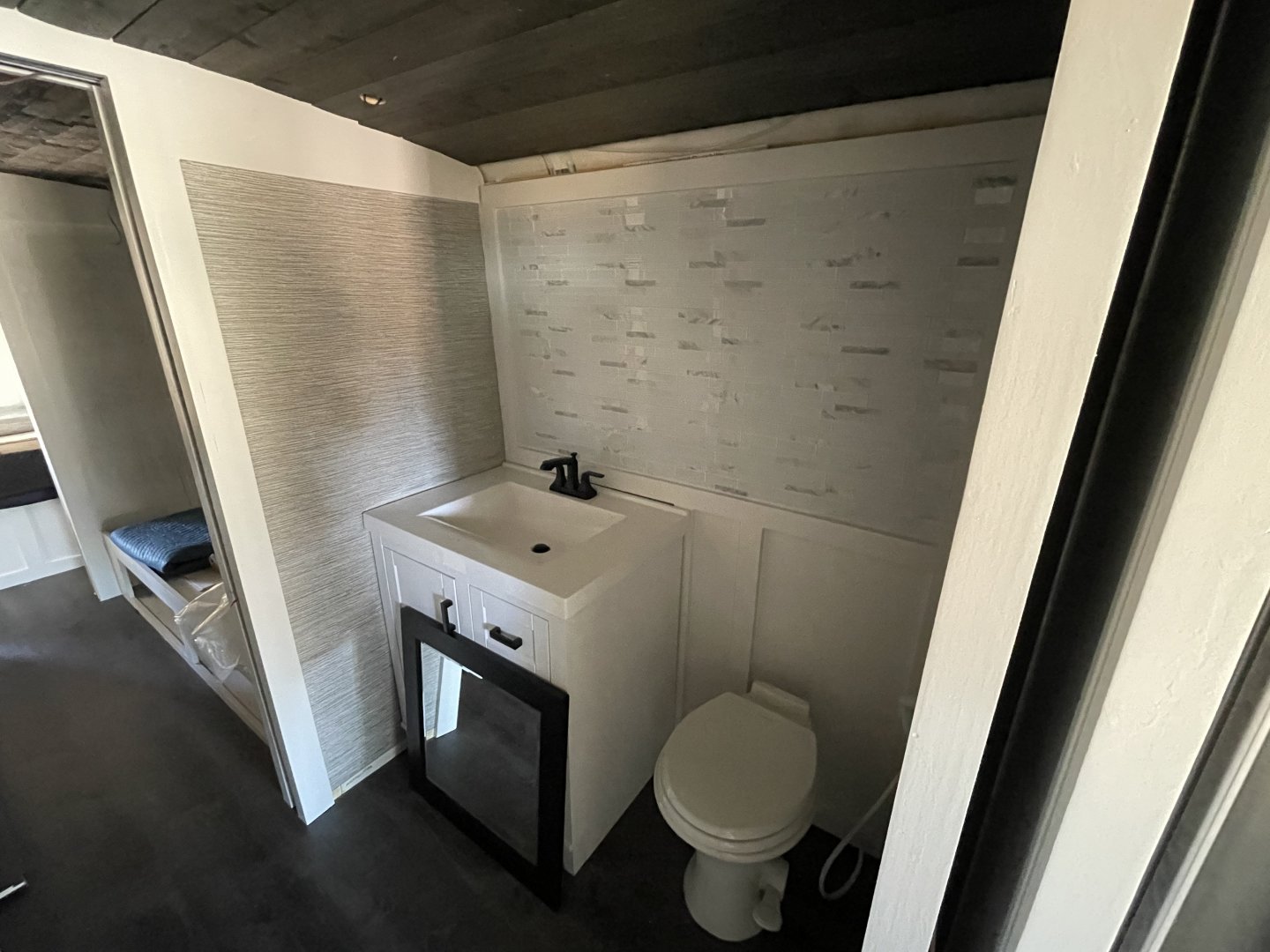 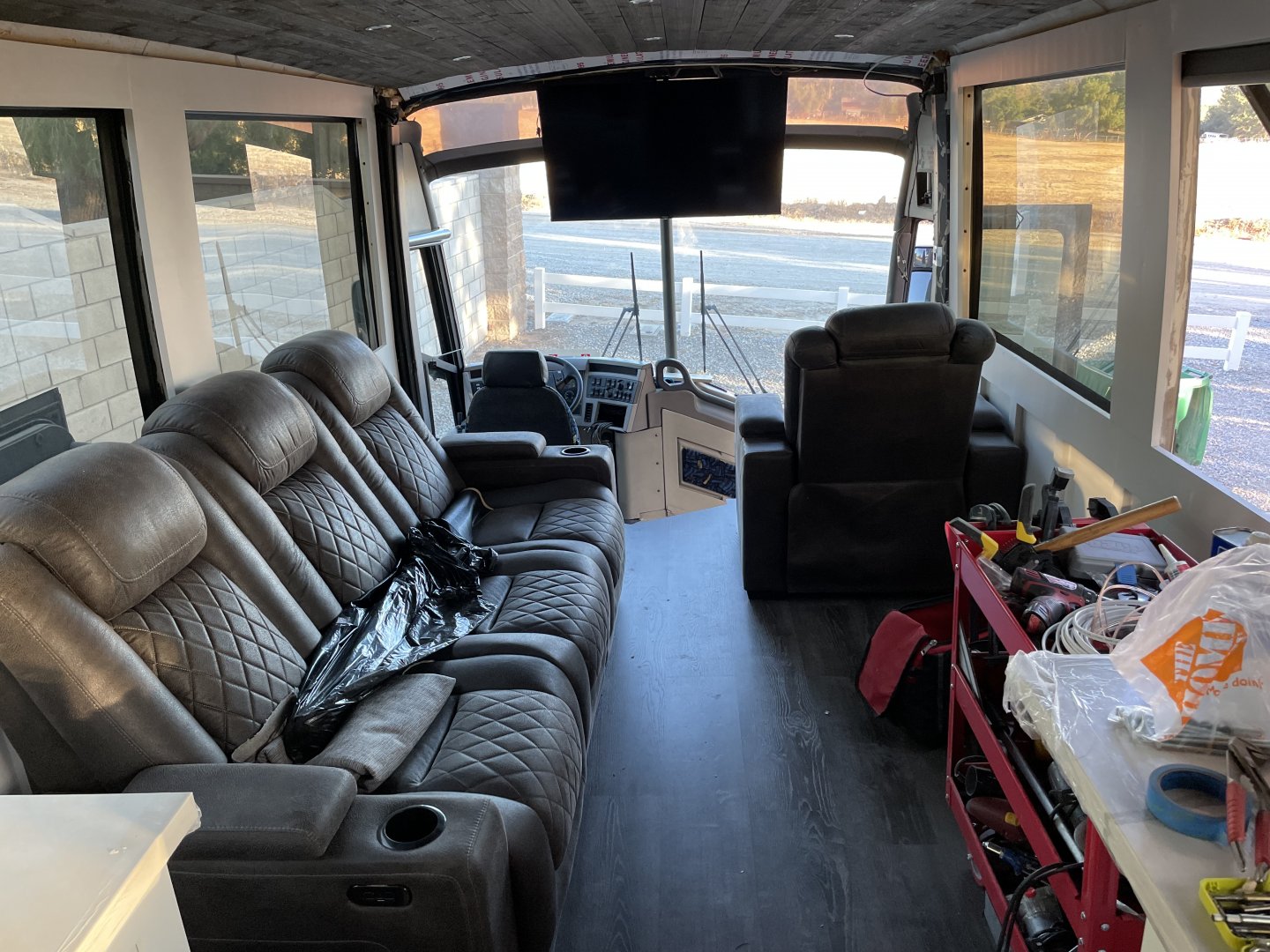 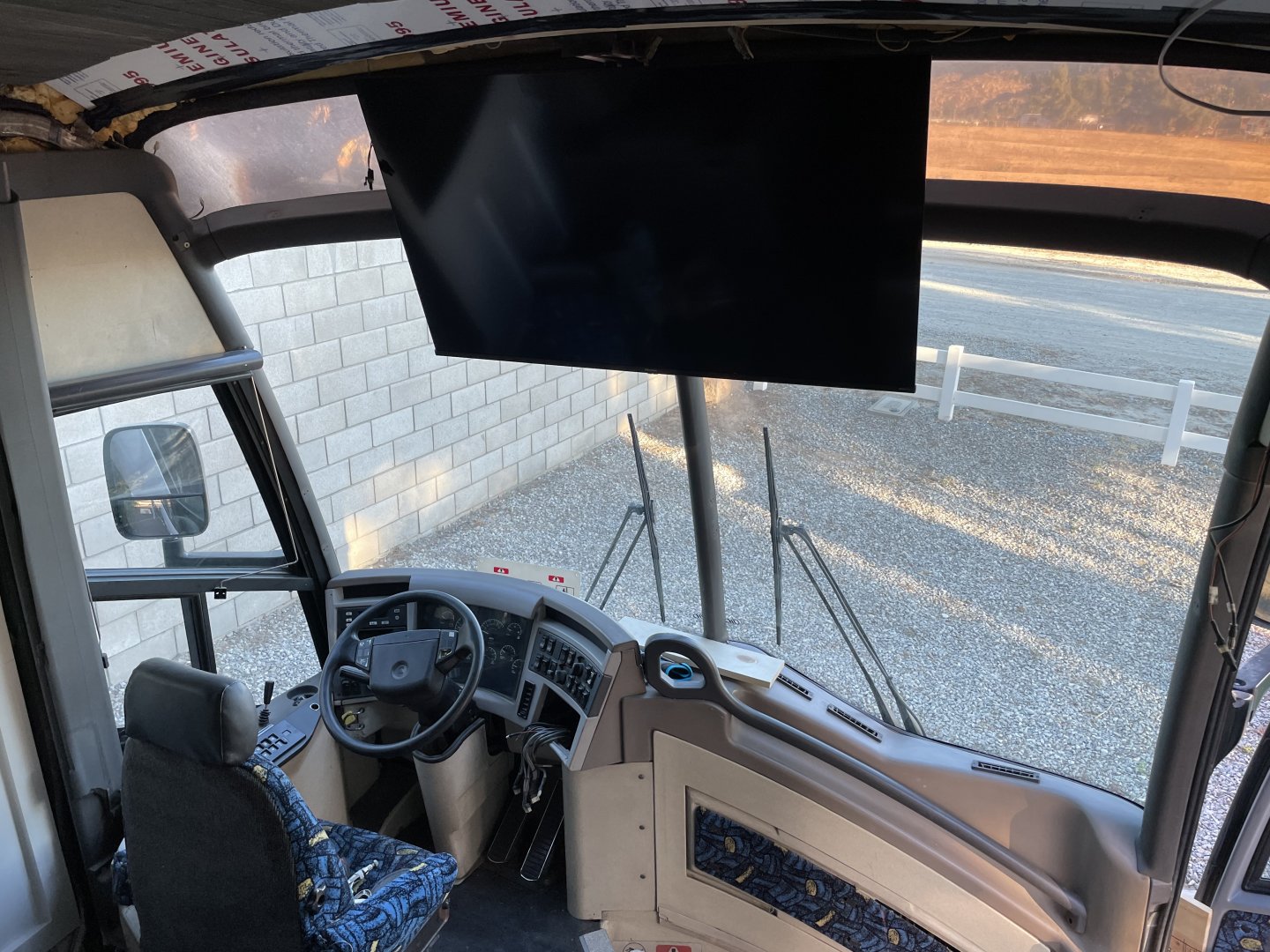 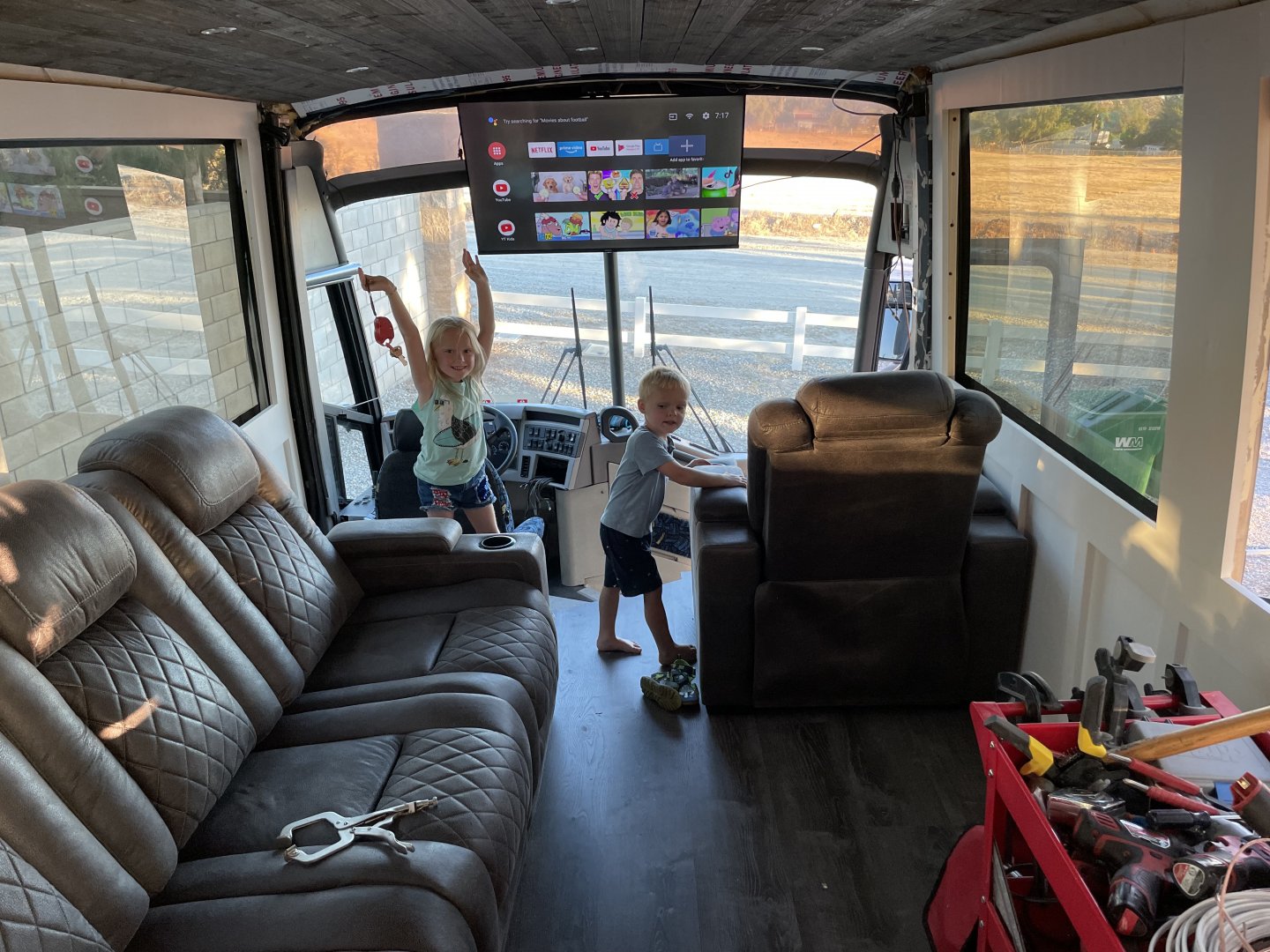 Are you mounting the individual recliner for a passenger seat up front? Bus is coming along beautifully

fmo24 said:
Are you mounting the individual recliner for a passenger seat up front? Bus is coming along beautifully

Based on this build, I bet you that recliner rotates within a year (After all other other projects are completed).
Also an automated stair covering gets deployed when the bus hits Drive and does over 15mph.
K 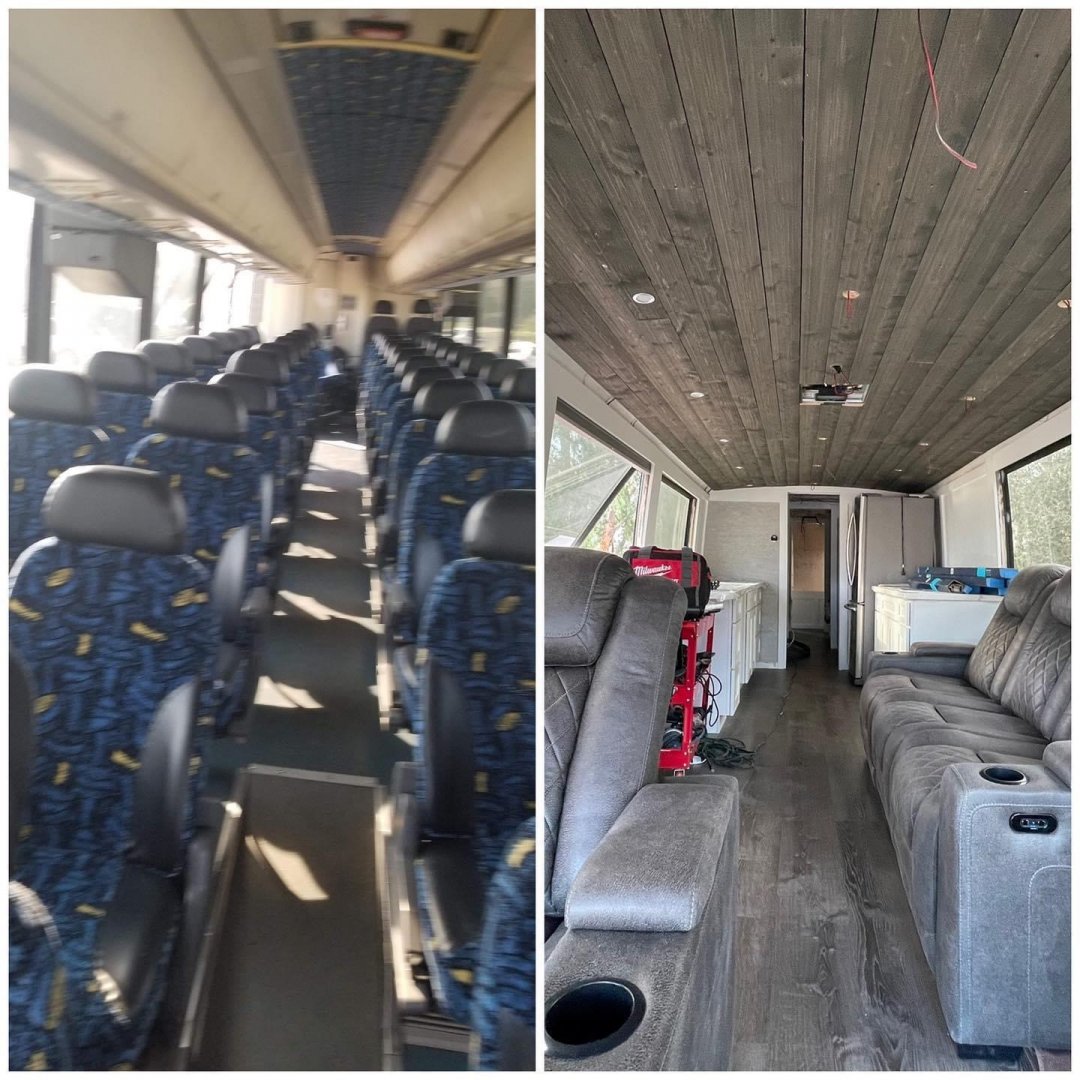 ka0tyk said:
Cabinets came in. All 1/2 cab ply no ikea like we were thinking.

Its July now. I guess you didn't get it done for your June trips. How far are you along now? Are you still working on it?

cold_one said:
Its July now. I guess you didn't get it done for your June trips. How far are you along now? Are you still working on it?
Click to expand...

bus is wired up with power. Plumbed for drains and supplies. Just finishing up some odds and ends here and there. We have a week left. Sorry for the lack of updates moving along at cheetah speed.
M

ka0tyk said:
bus is wired up with power. Plumbed for drains and supplies. Just finishing up some odds and ends here and there. We have a week left. Sorry for the lack of updates moving along at cheetah speed.
Click to expand...

Did you do the DMV conversion to RV yet? I heard that's the hardest part. I hate dealing with DMV.
K 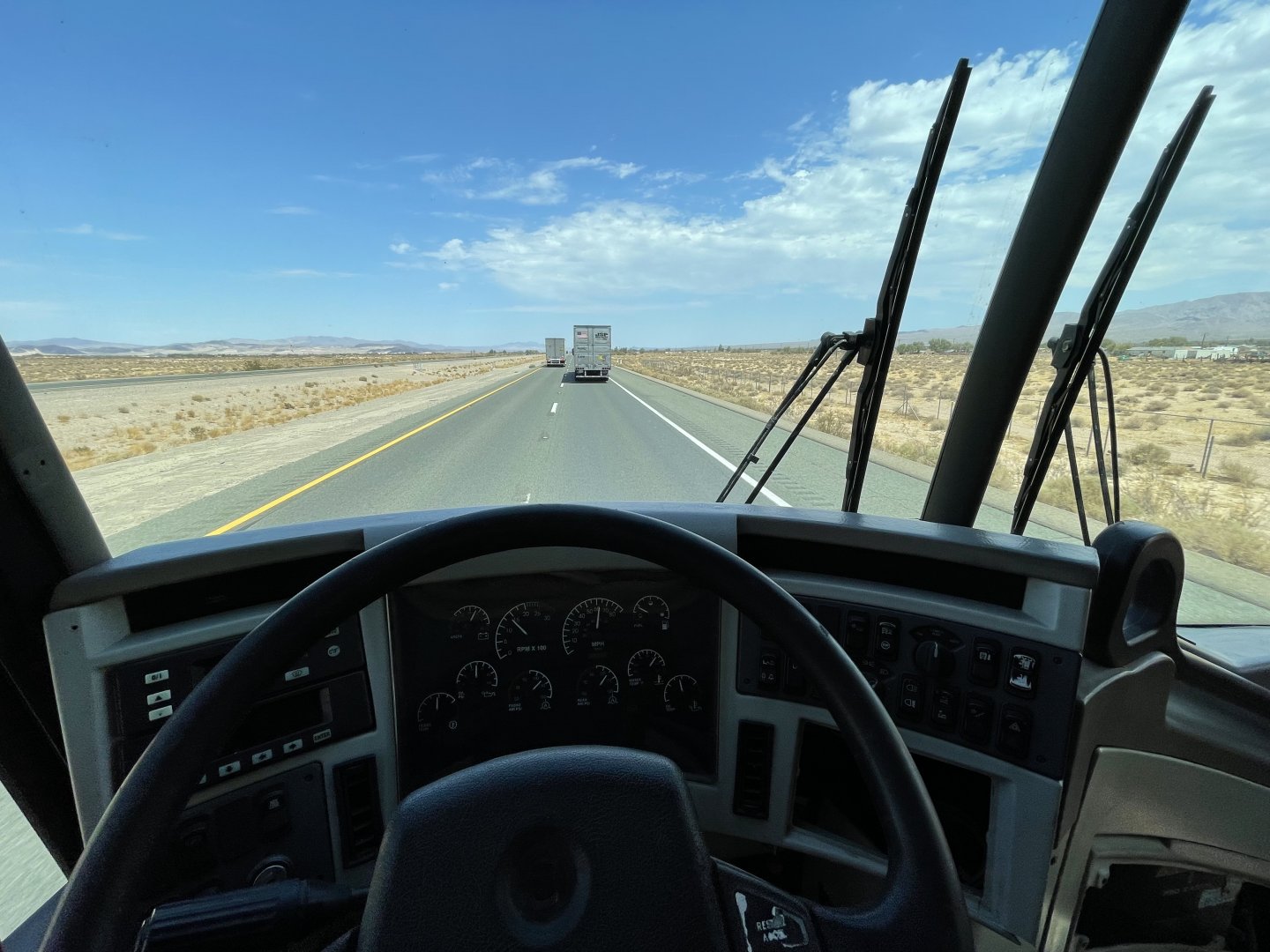 Knew the tires needed some help. Found out the hard way. $200 for roadside used and we are back on the road. 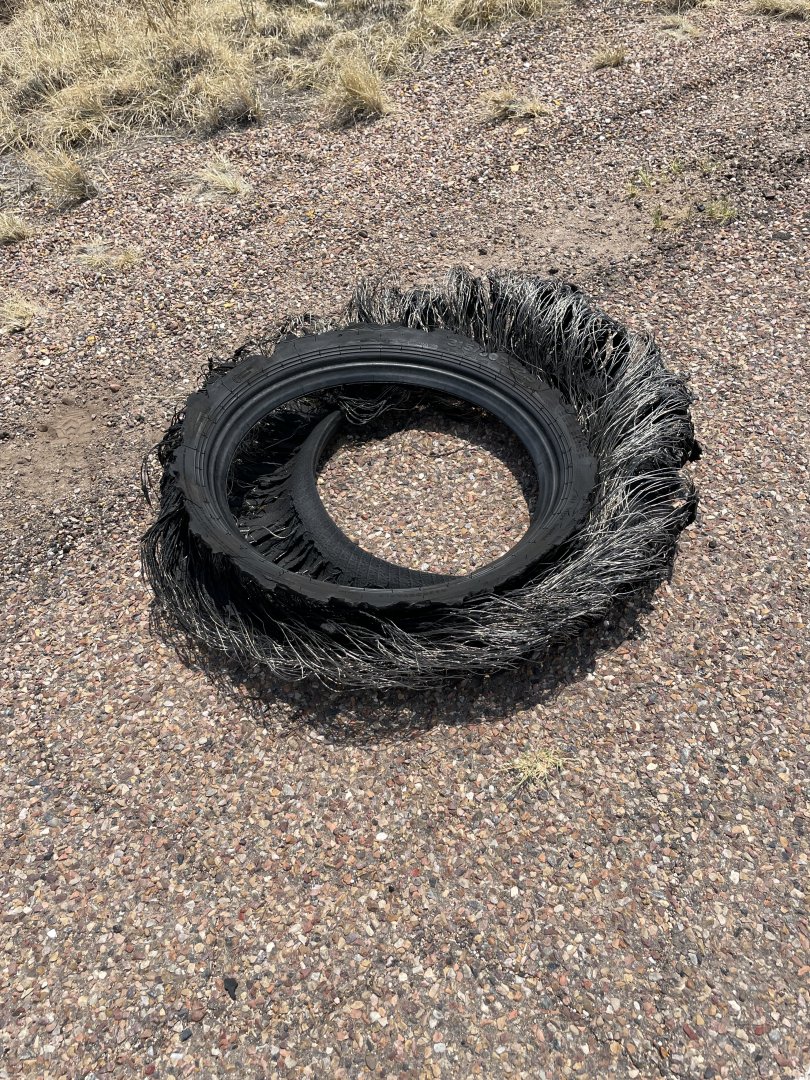 We have a set for us in Albuquerque and we made it. 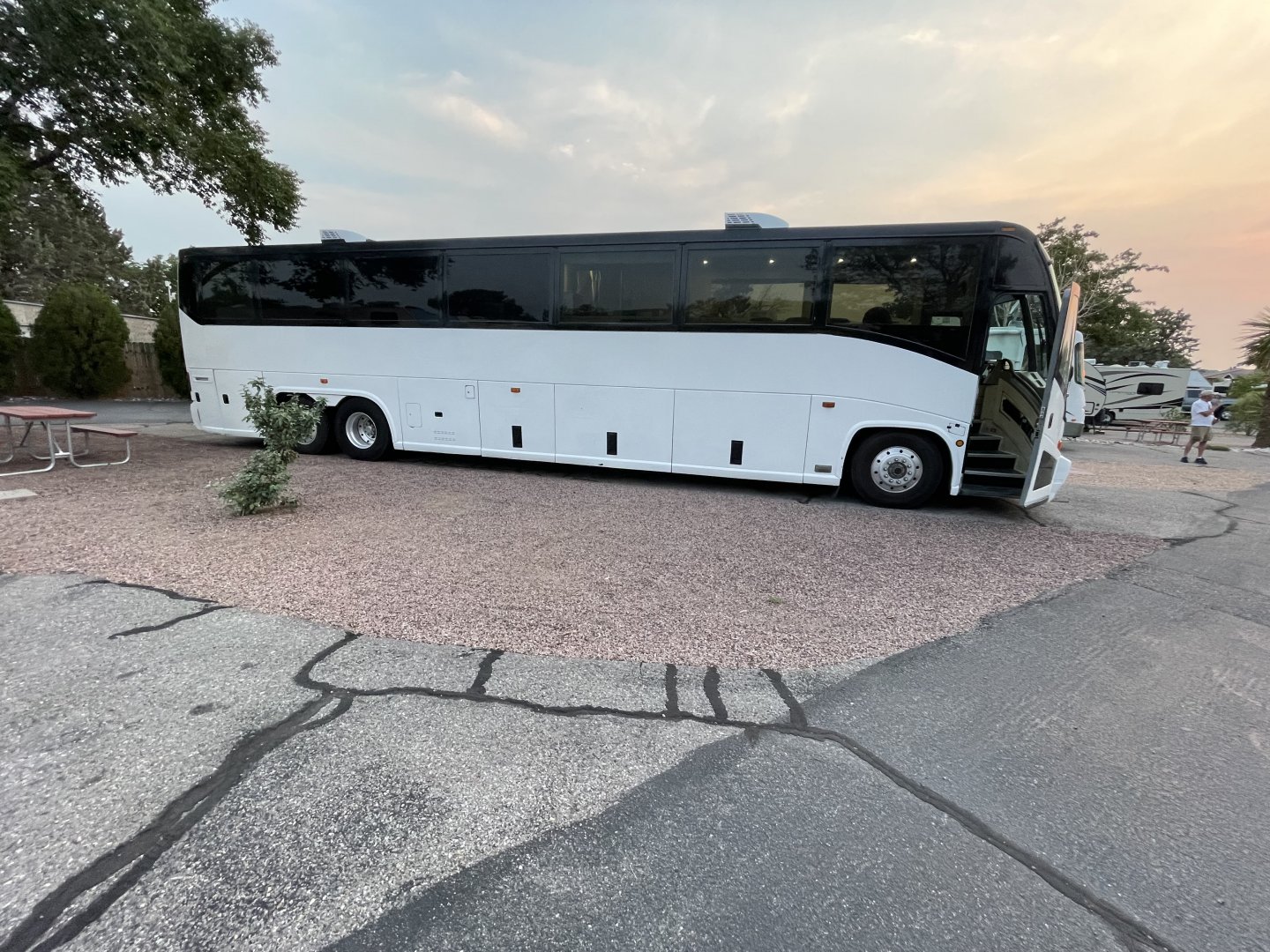 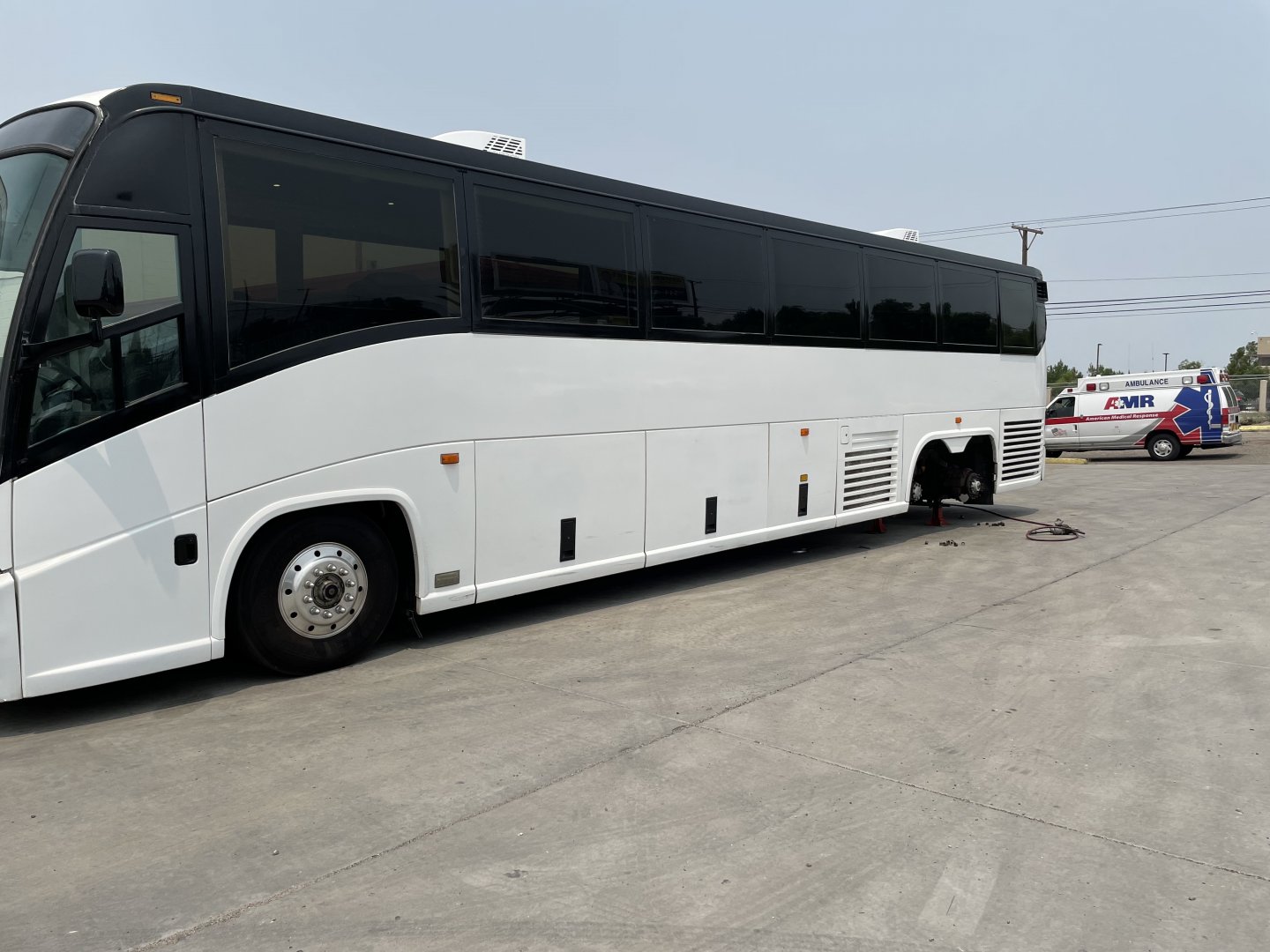 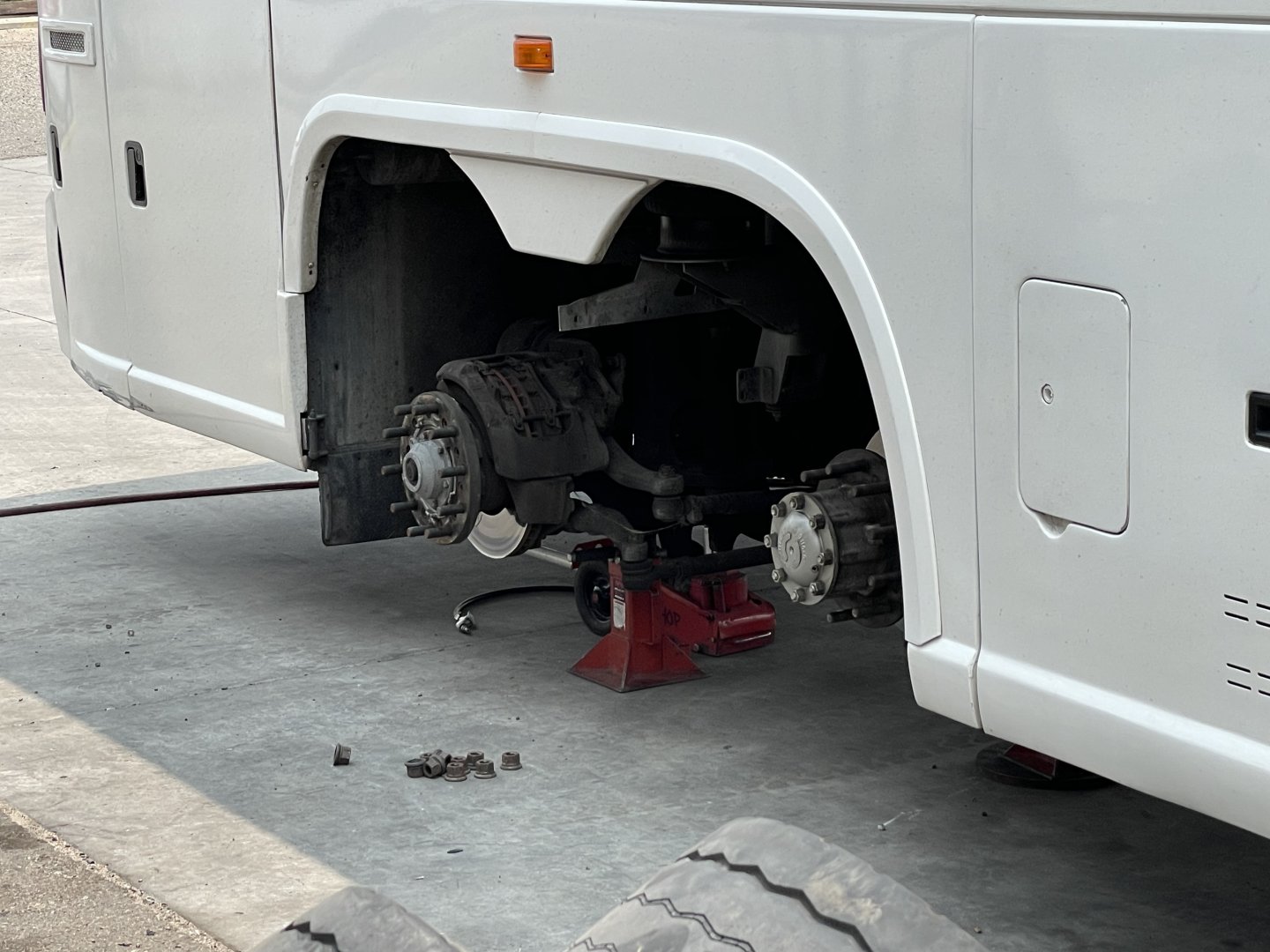 Do you think if you had ample time, you could have found them any cheaper?

As with everything these days, I guess this is the norm?
K

havasujeeper said:
Do you think if you had ample time, you could have found them any cheaper?

As with everything these days, I guess this is the norm?
Click to expand...

I bet it feels good and safe with new shoes all around, right?

That sucks to start a vacation with a $4200 tire bill. Hopefully the rest of the trip is smooth sailing.
K

It was always in the back of my mind that it needed tires. I’m not gonna let it ruin our spirits it was a little setback and part of the adventure as a whole. We celebrated with steaks. 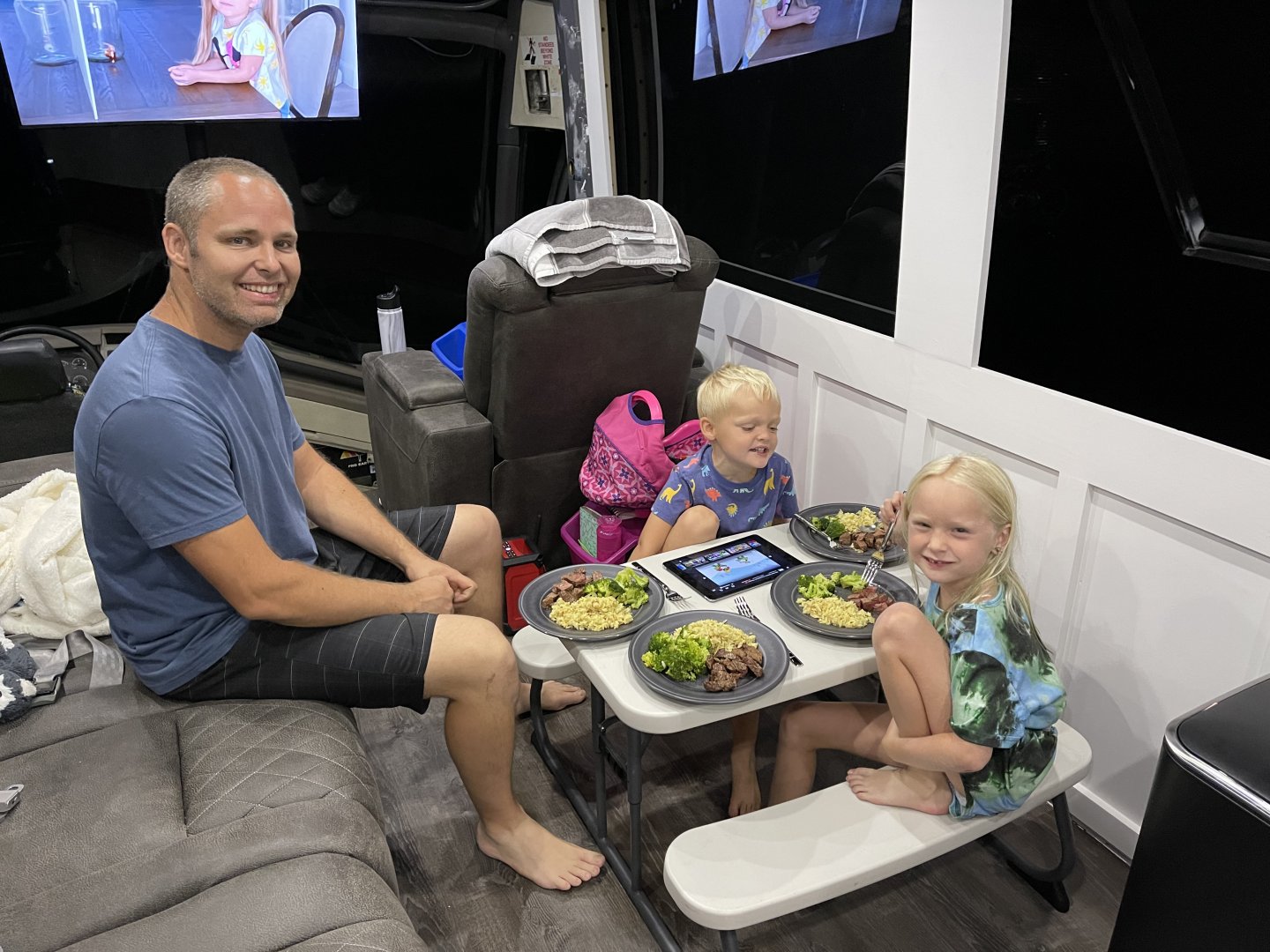 and tonight we are making cookies in our convection oven. 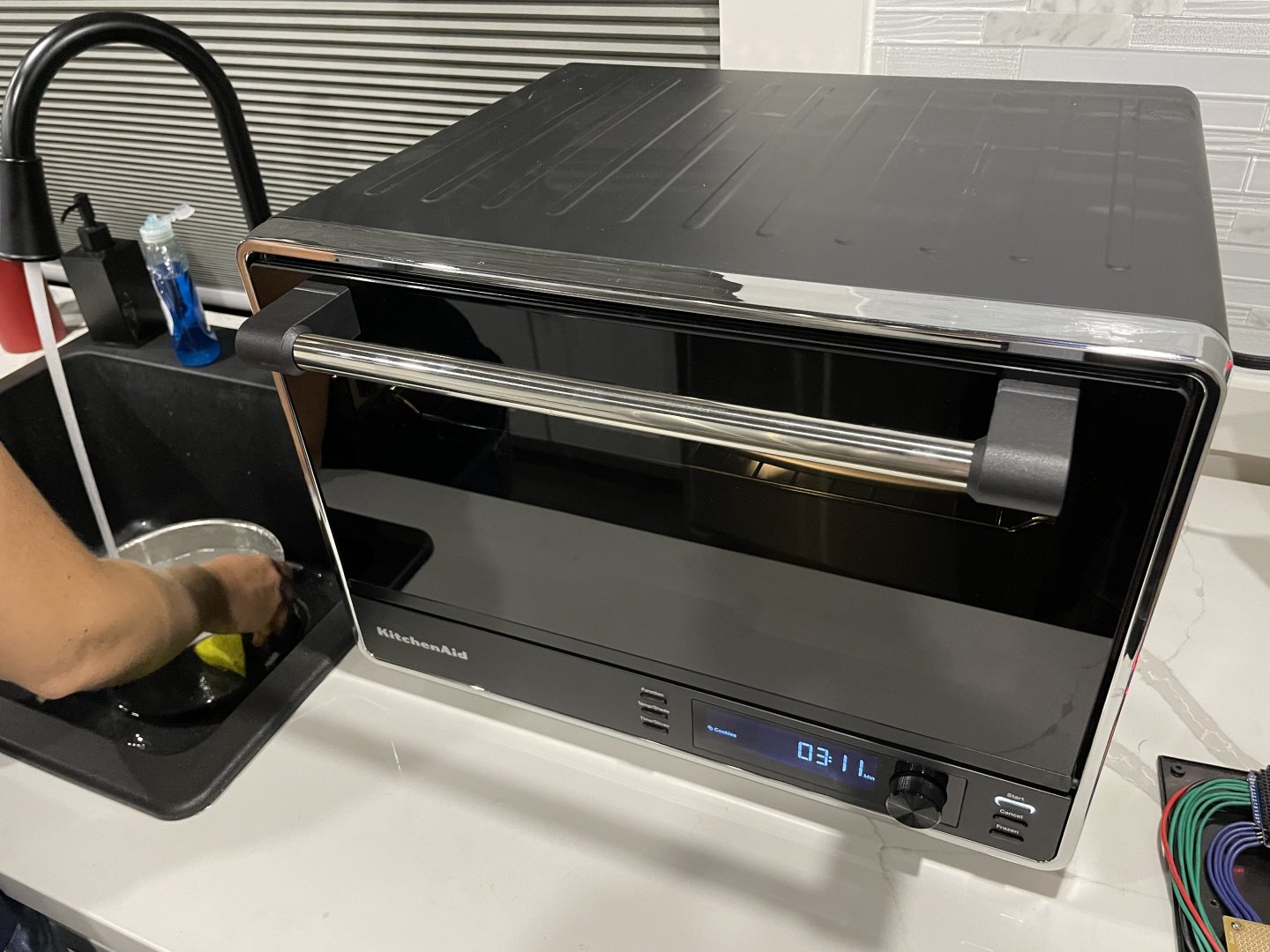 The kids enjoyed the tour of the place. They had giant tractor tires and little tiny ones. A full retread facility etc. it was pretty cool. Redburn tire.

How are those Furrion AC units doing keeping you cool? You did two 15.5k units, or three?

I just want to know where you at now? I guess I'm living vicariously thru you?
K

havasujeeper said:
I just want to know where you at now? I guess I'm living vicariously thru you?
Click to expand...

wichita Kansas with family. We had a little get together party with some friends and family here with bus cookies drinks etc andthey all checked it out. It was good because it finally gave me an opportunity to clean it inside and out. We have noticed driving around that all the construction dust is still coming out and I’ve never really washed it before. Just a quick power wash and a rinse. This time I scrubbed all the greasy fingerprints off of the sides and I cleaned all the bays etc.

Congrats! Did you upgrade the driver’s seat?

hallett21 said:
Congrats! Did you upgrade the driver’s seat?

I bought a new takeoff seat from a Peter built. But the mount was different had to wait until after the trip.
K 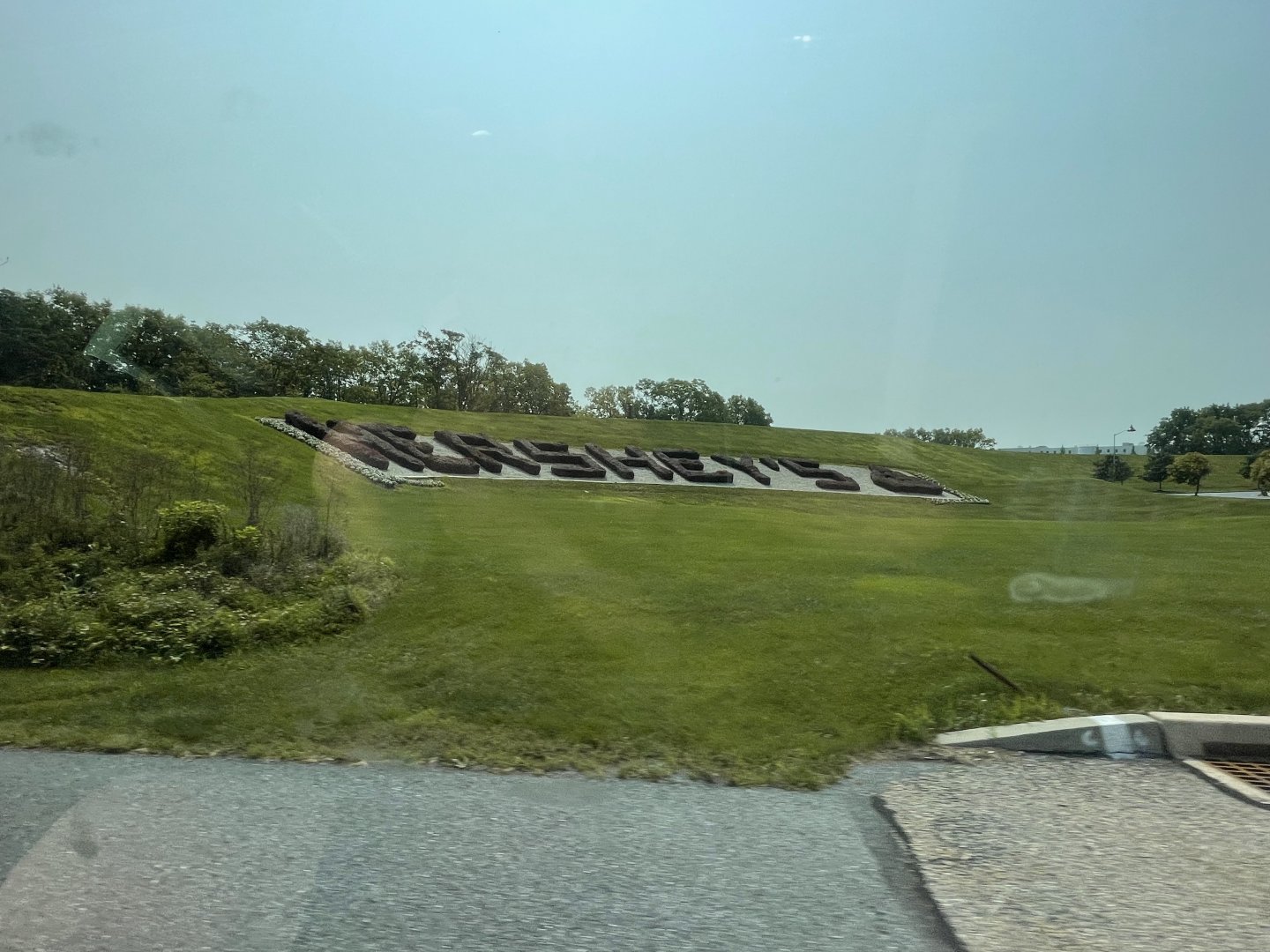