Article Gallery
It Can Be Done, But You Need Some Know-How

If you’ve worked and owned your own marine/outboard/sterndrive repair facility for nearly sixty years, and your heart and soul is everything high performance, what kind of boat would you pick for your off-hours ride? If you’re Ted Miller of All Seasons Marine in Boulder City, Nevada, it’s got to be an outboard, very fast, plus just enough comfort and functionality to accommodate the wife and grand kids on a Sunday afternoon.

Although the shop is only minutes from the launch ramp at mammoth Lake Mead, Nevada, Ted also purchased a second home in Bullhead City, Arizona, just a stone’s throw across the Colorado River from Laughlin, Nevada. And that’s where he plans to keep and run his pristine STV tunnel so he doesn’t take his work home with him on the weekends. 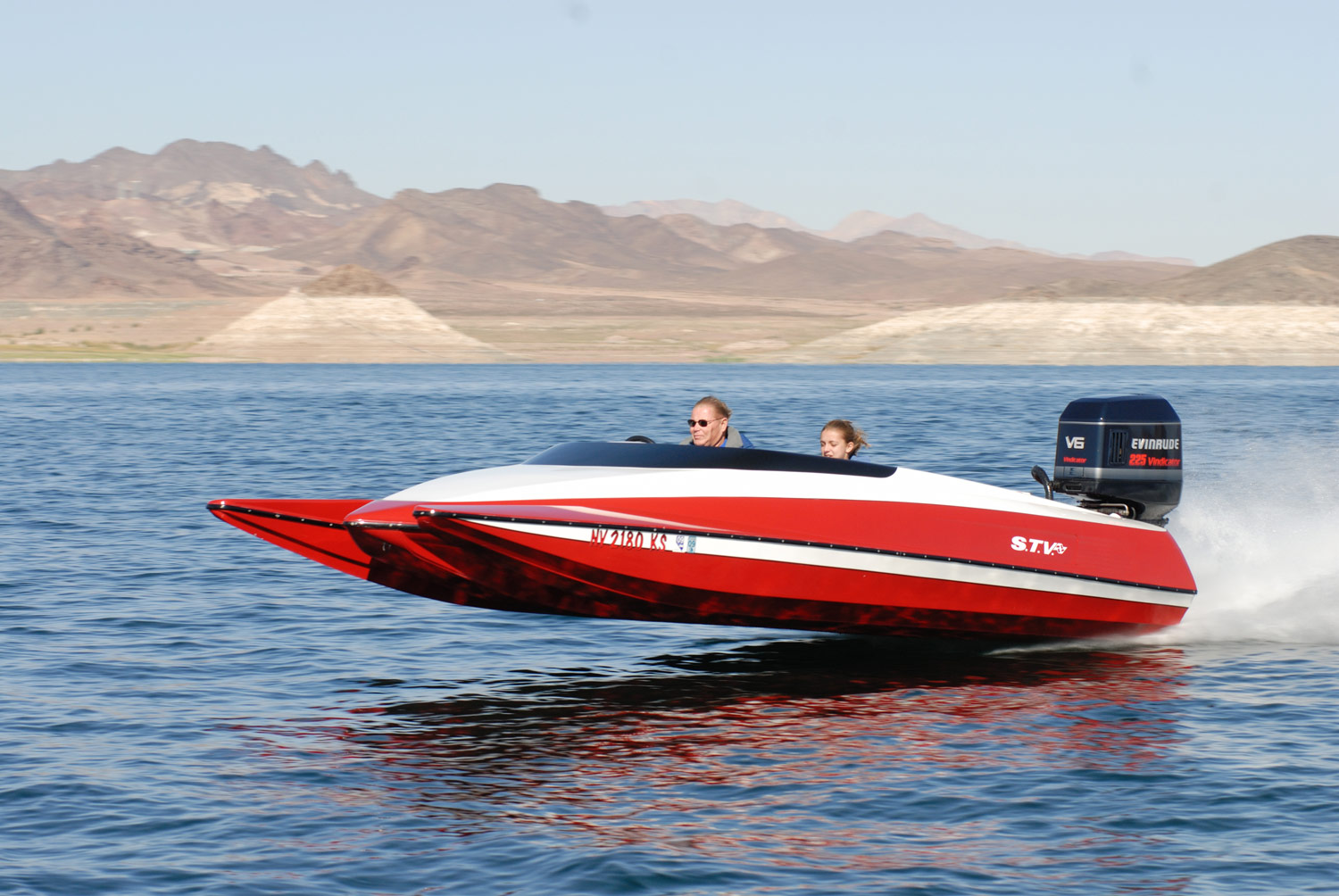 Ted’s boat shopping journey began in 2003. He was looking for something basic, restorable, and obviously fast yet affordable. In the pages of the Southern California Boat Trader, Ted came upon an ad for a rightly priced 1993 18′ 6″ STV Euro Ski four-seater. Bingo — the perfect boat for the upper river. The only drawback was a carbureted Merc V-6 hanging on the back, something no self-respecting Johnson/Evinrude mechanic could live with very long.

The STV soon found its way to Ted’s shop in Boulder City and the make-over commenced. Understandably, the old Merc V-6 was immediately relegated to an available motor stand in the back of the shop with a ‘for sale’ sign while a 225 Evinrude Venom V-6 build-up project began in earnest. 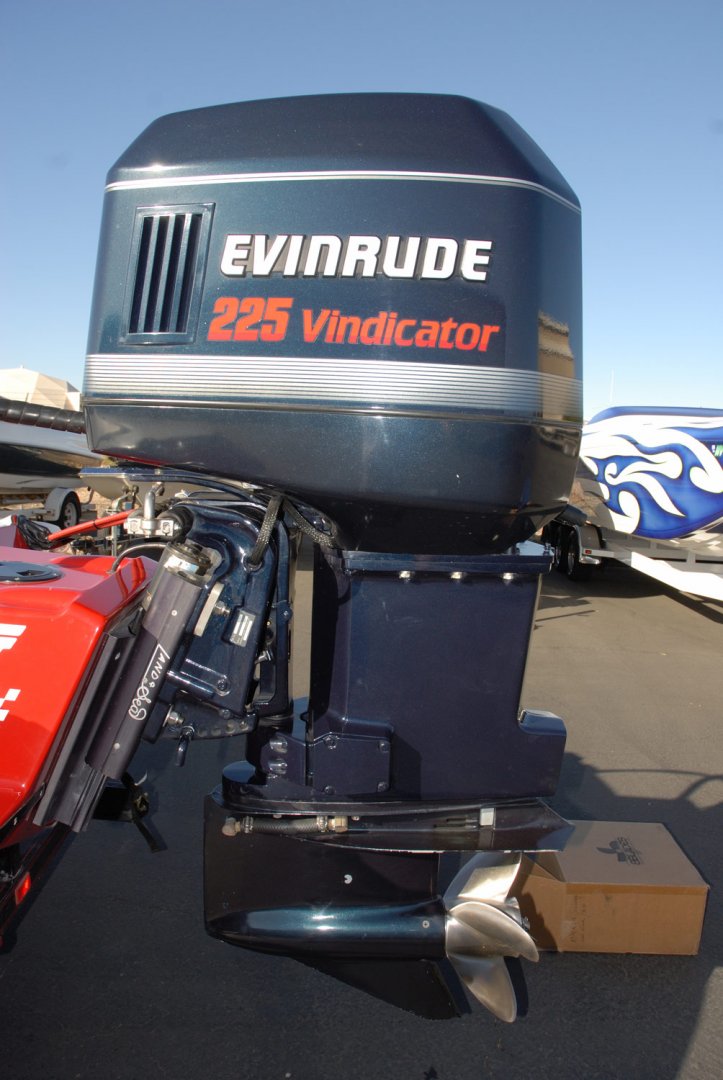 “Over this many years in business, I’ve acquired an awful lot of parts and pieces to old engines and drives,” said Ted. “I pretty much had everything I needed to assemble a 185 cubic inch V-6 Venom….block, pistons, crank, rods, carburetors, etc. I didn’t go too radical on the block modifications, I wanted something that was still going to be dependable and not too temperamental. I decided not to raise the ports but to just clean up everything inside, give it a mild blueprint and balance and leave the rest alone.” 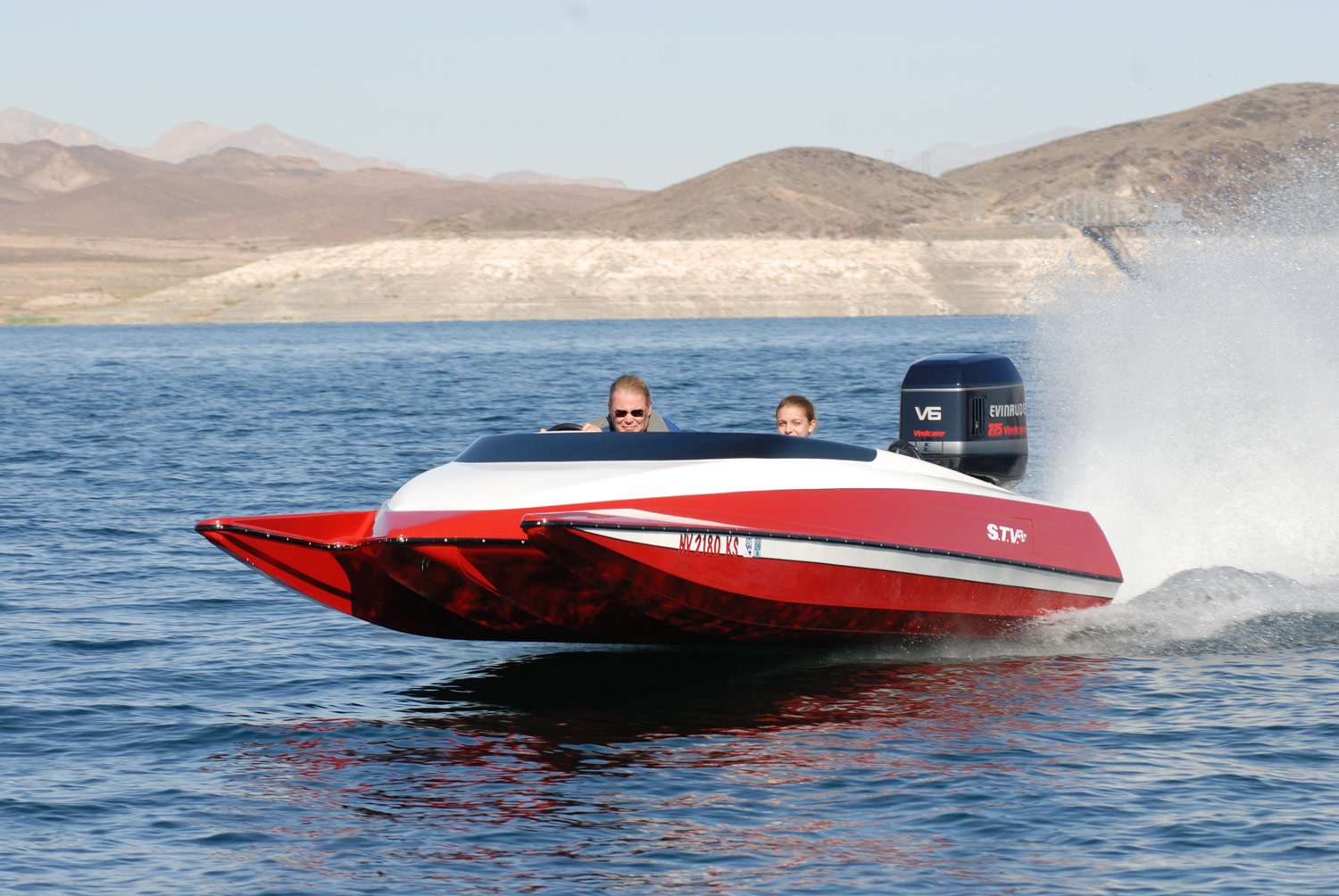 Ted did make a change to the stock Venom carburetion system, a trick he learned from working on customer engines back in the 1990s. “Those particular engines had some problems with sluggish acceleration and loading-up at idle speed. When they originally came out, the carbs had large venturis and small throttle plates which didn’t work so well on the bottom-end. Later on they switched and went the opposite with bigger throttle plates and smaller venturis which helped. I found that using a combination of the two, large venturis and large throttle plates, seemed to work best for all ranges.”

Because he’s been a long-time advocate and expert of the OMC V-8 outboard product, Ted decided to try a first-time adaption — mating a V-8 mid section and exhaust housing on a V-6 Venom. 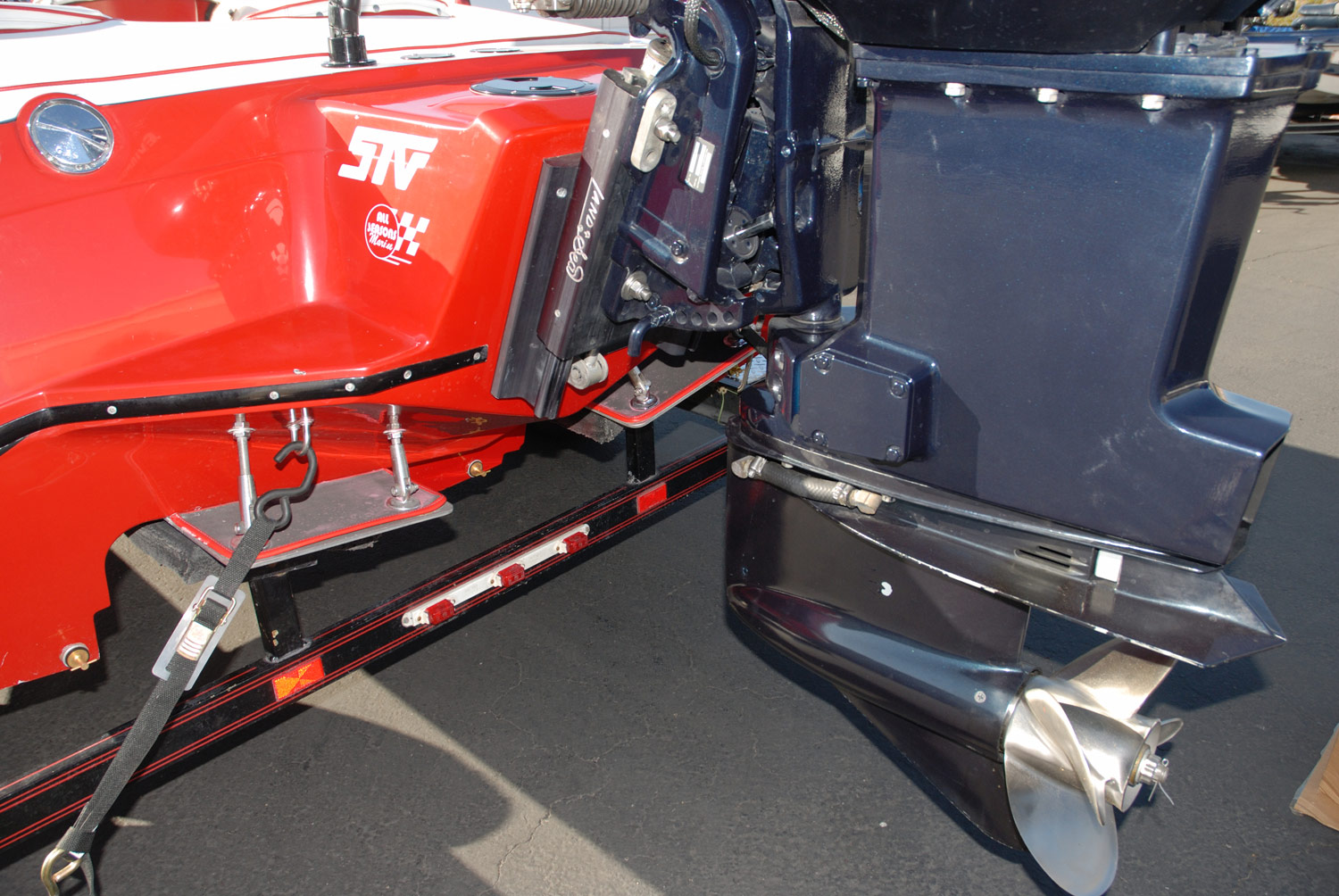 “I figured if it worked, I’d pick-up some free horsepower and extra torque. It took more custom fabrication than I originally anticipated to make it work but now the megaphone dumps the exhaust straight out without any bends, curves or restrictions. It’s a much cleaner path than a normal V-6. It’s definitely a little louder than a stock set-up but it seems to make the engine run great. I’ve got lots of torque on the bottom-end and it has no problem running up to 7,000 at WOT.”

The 18 Euro Ski is really one of the most sought-after pleasure/performance models developed by STV’s originator, Roark Summerford. This particular version has what’s called the “inverted ski bottom” referring to the configuration of the center pod. It lifts quickly and carries the extra weight of on-board passengers better than most Mod VP style hulls. 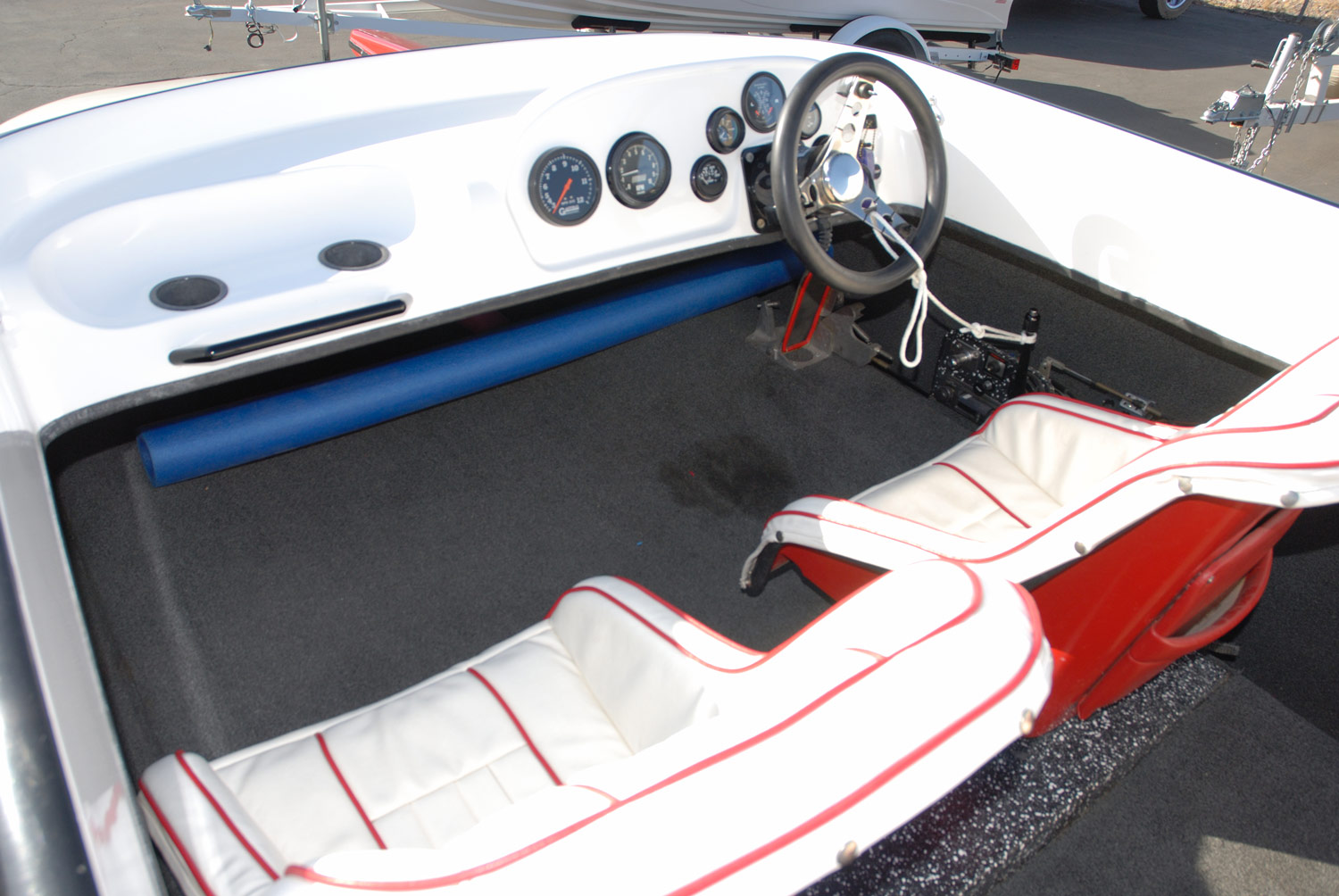 As you can see from the accompanying photos, the cockpit is rather roomy for an 18-footer and makes a very civilized four-passenger play boat. There’s also a fair amount of storage space under the hinged aft seats for PFDs, safety gear and a basic tool kit plus a fuel tank and battery. 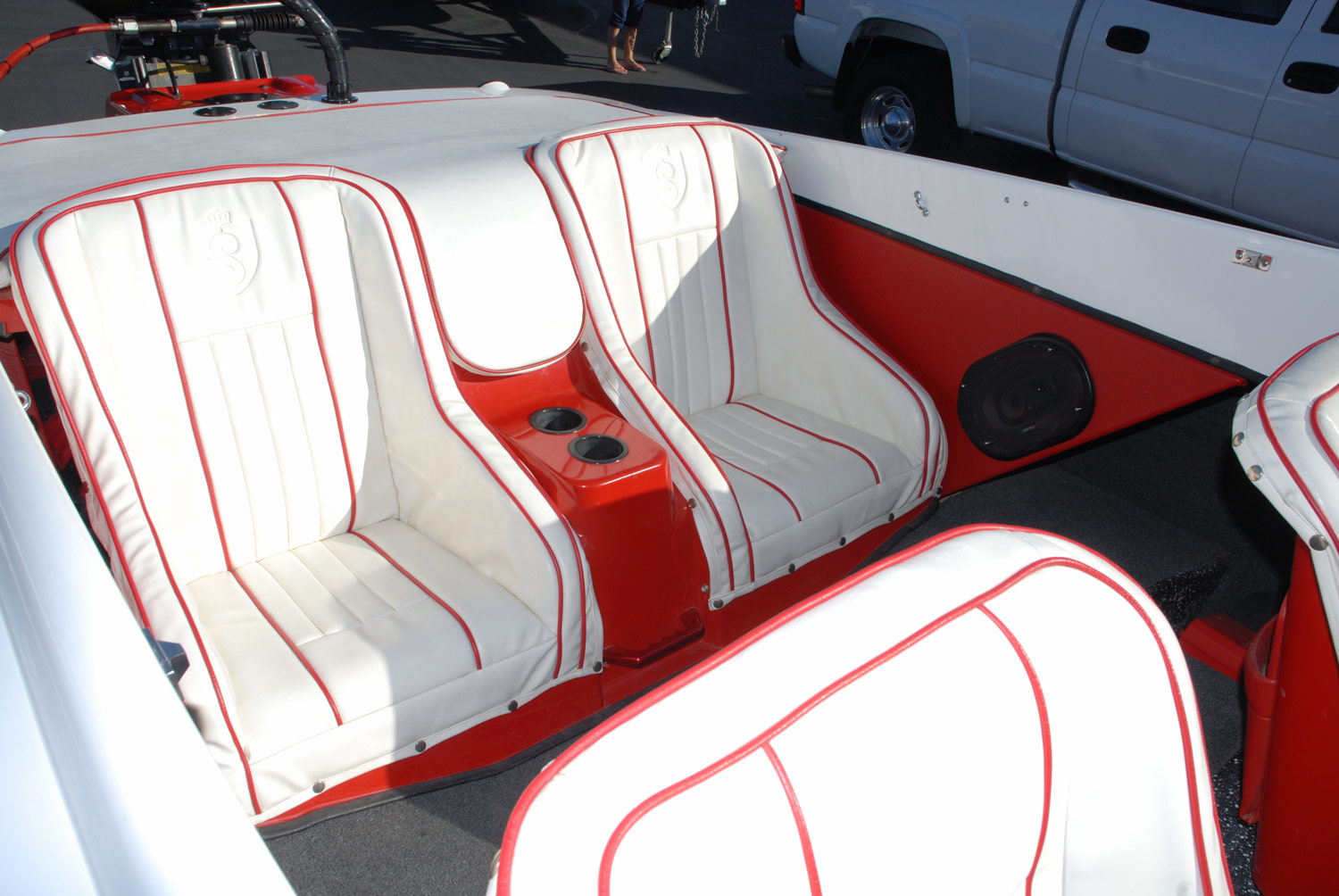 As you’ll also note in one of the photos, there are manually adjustable tunnel tabs at the transom. These were on the boat when Ted purchased it and have stayed on ever since. They do have considerable influence on the hole-shot and general running angle of attack so Ted spent quality time adjusting and testing to determine the optimum setting. 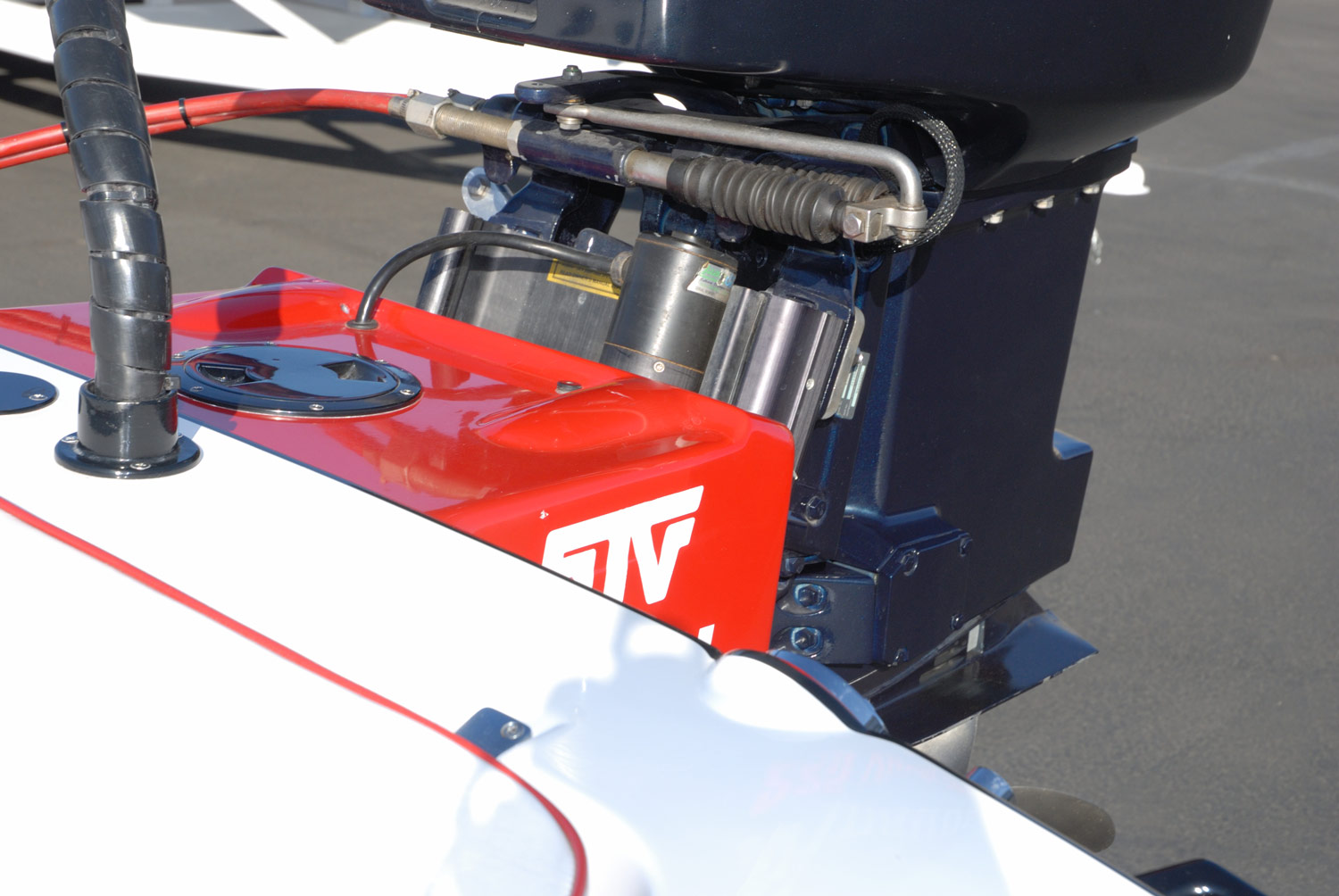 When the “Millerized” 225 Venom was ready for installation, a Land and Sea hydraulic/electric adjustable jackplate was chosen along with a new dual rack Morse steering system. The gearcase started as a stock Evinrude, but with a modified All Seasons nose cone/low water pick-up addition and a few other internal secrets. 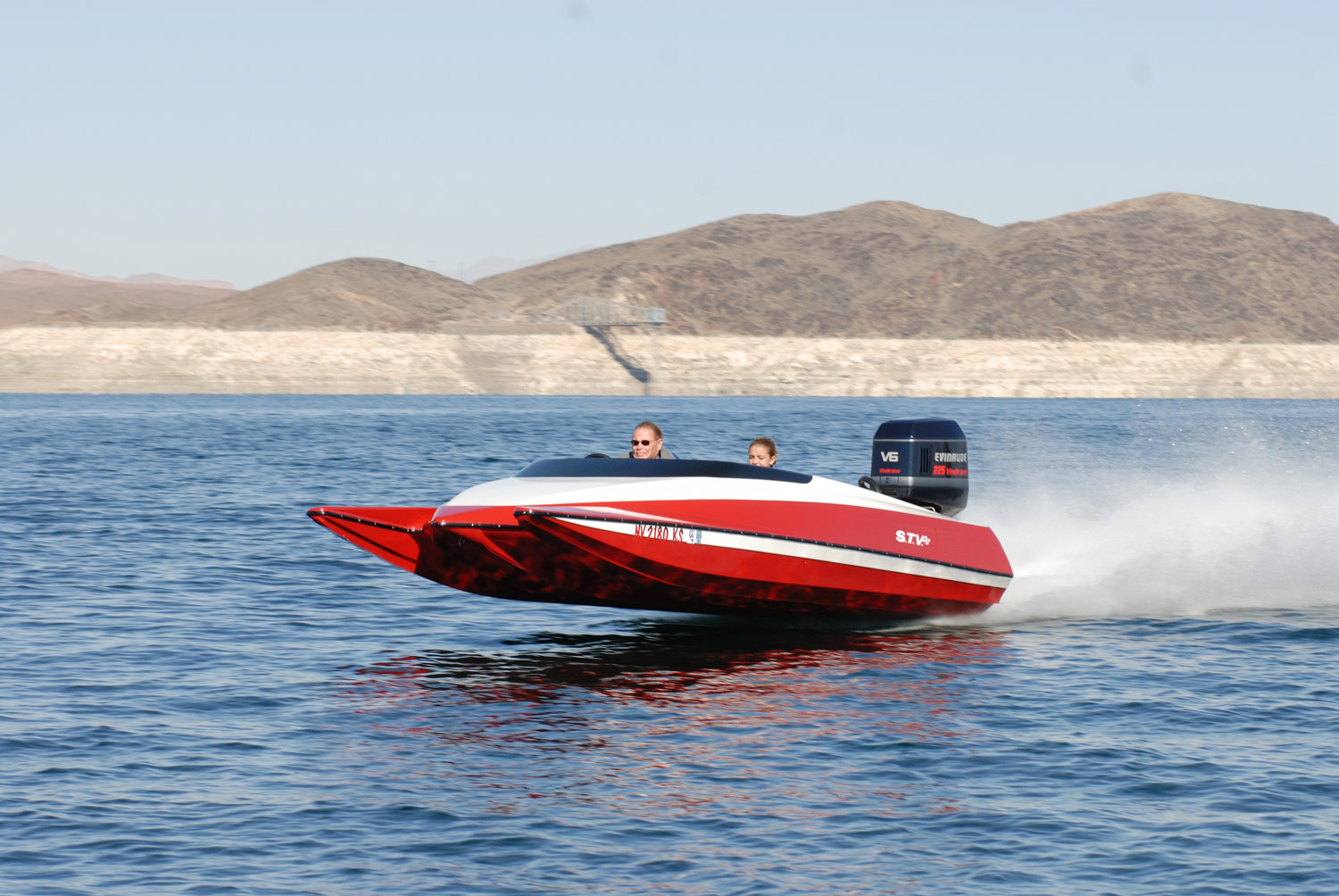 To date, Ted’s best GPS reading is 105 mph with a re-worked 30 offshore prop turning right on 7,000 rpm. Although not quite as fast, Ted’s favorite wheel is a much massaged 29 pitch Shooter four-blade that delivers outstanding hole-shots and still pushes the speedo needle to the 100 mph mark. 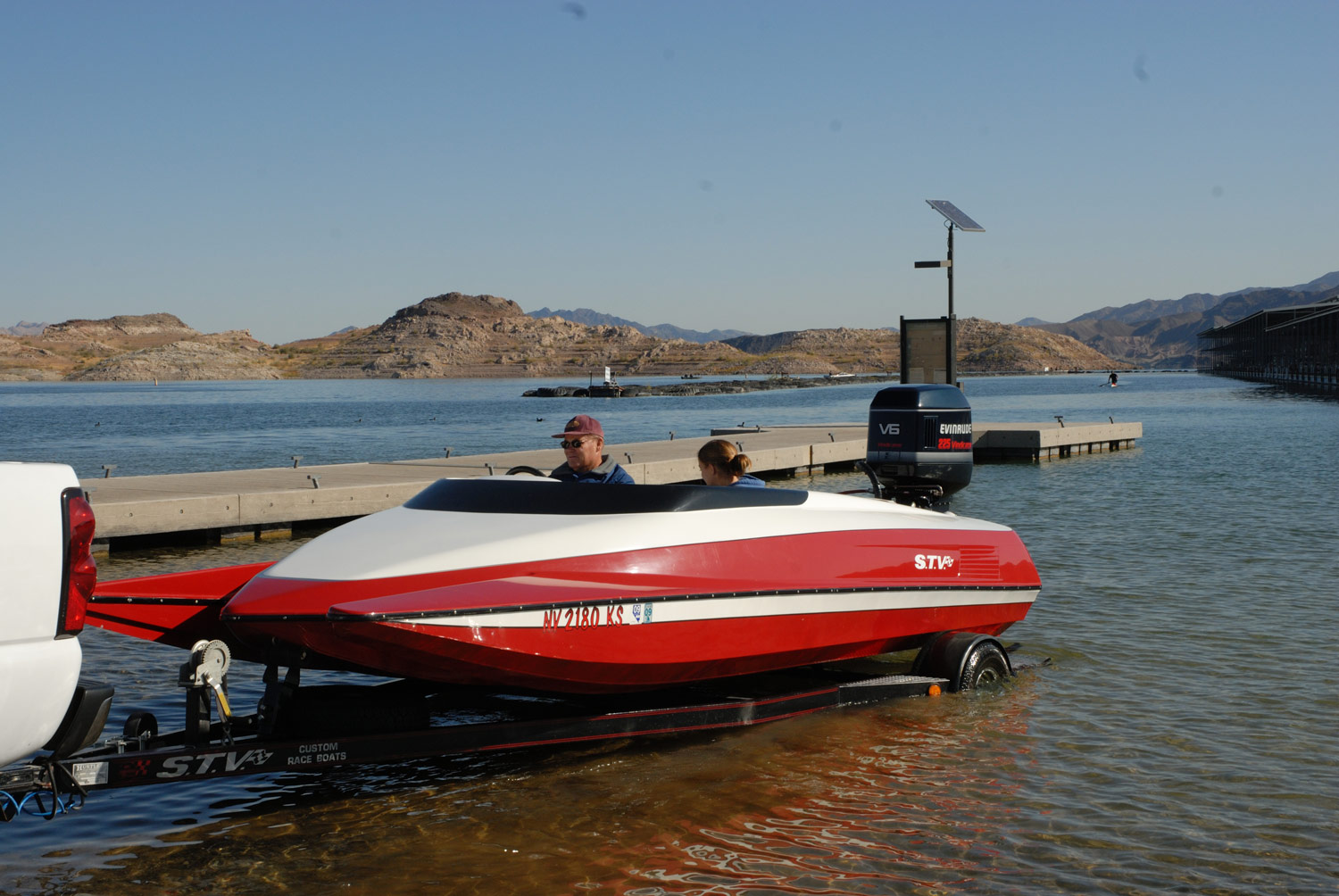